You just concluded your year-end trip yet you’re itching to get away again. Plus, the monsoon season is coming to a close! As sunny days creep back up on us, here are 10 islands off the Singapore shore you can spend a day at – without a passport! 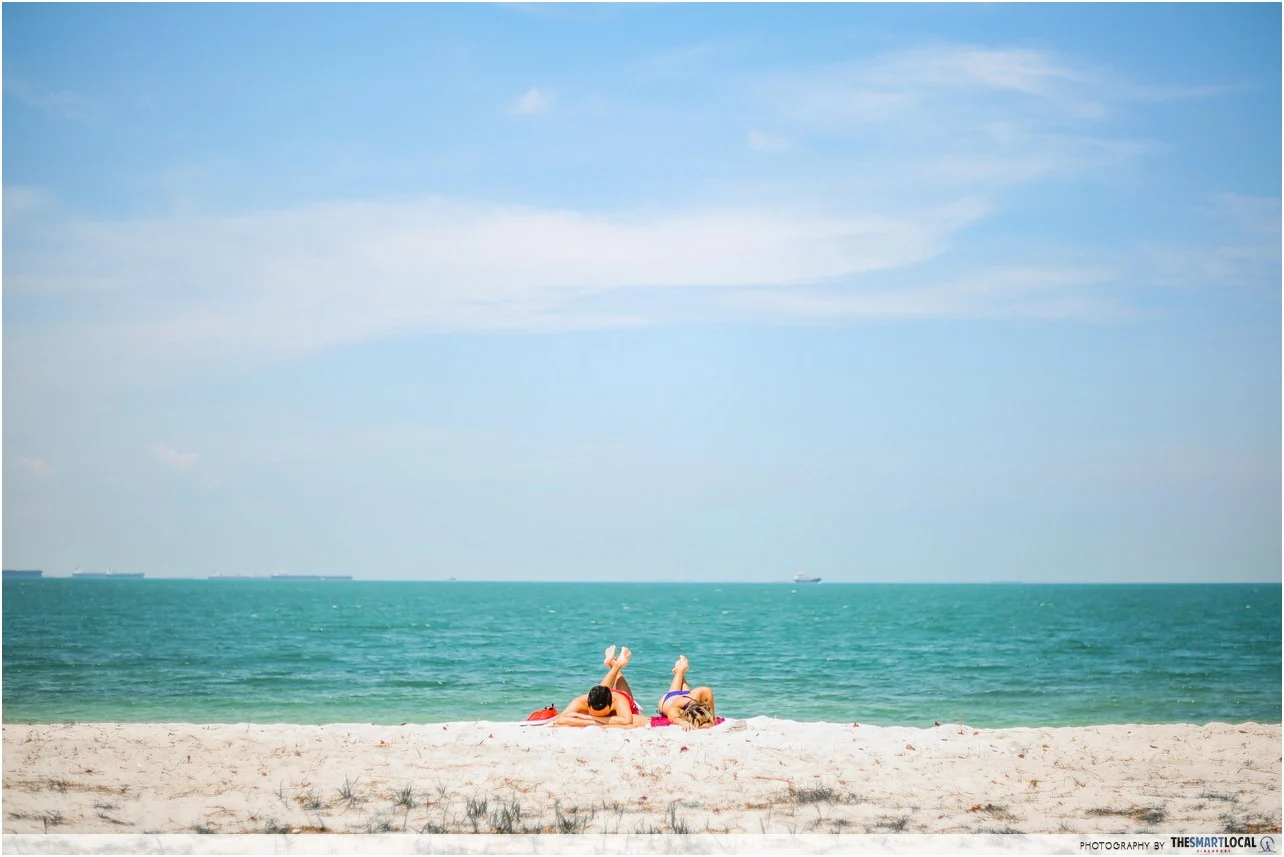 The Story: Call it St. John’s secret. An offshoot of St. John’s Island, Lazarus Island is Singapore’s best-kept beach. Like the biblical character, Lazarus, who was raised from the dead, the existing 800-metre stretch Pulau Seringat is now a reclaimed beach overlooking a beautiful lagoon that is perfect for swimming in. 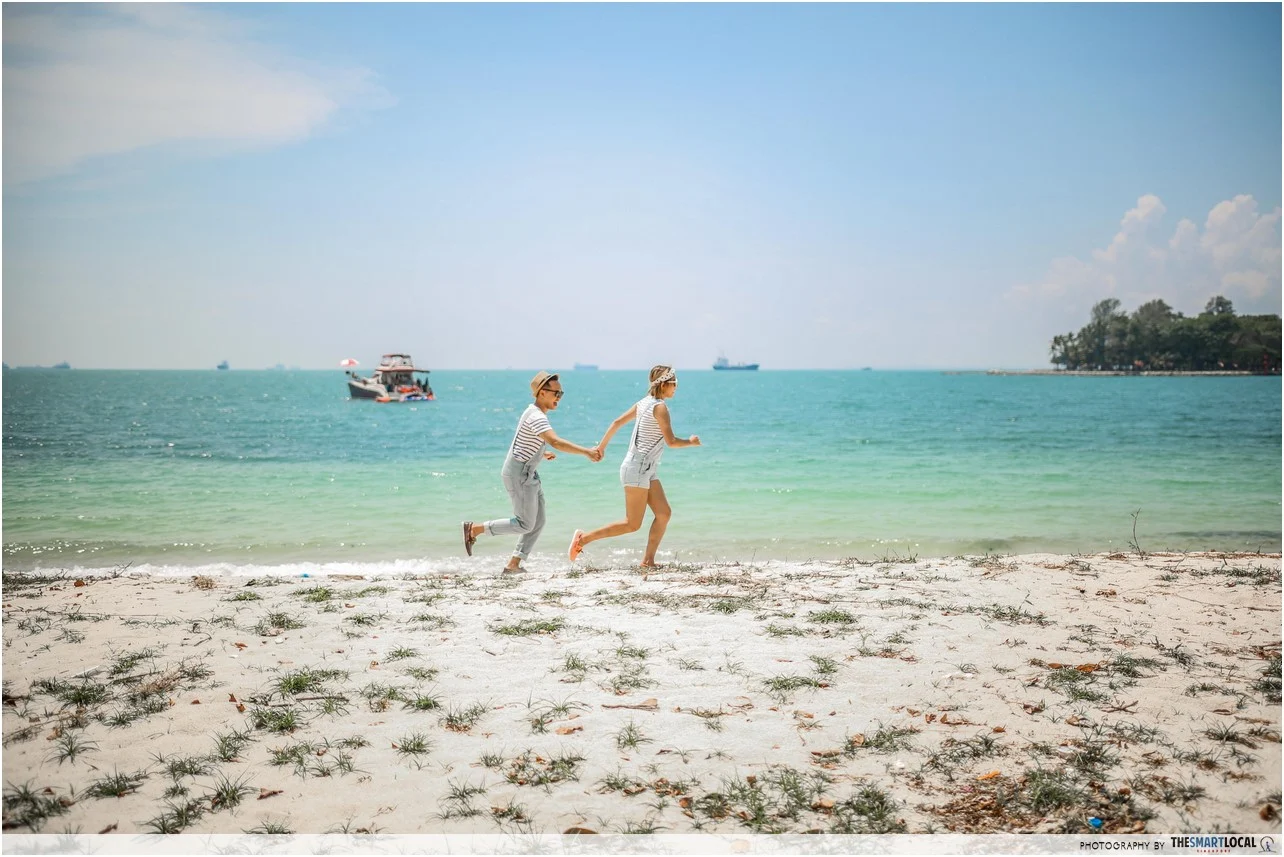 Things To Do: The next time you’re craving for white sandy beaches and crystal clear waters, forget the Maldives and head to a replica just a boat ride away. Fool your friends with a Boracay geotag when you snap a photo on Instagram. They’ll never know the difference. *wink* Except, now that it’s on here …

Getting There: Take a round-trip ferry ride from Marina South Pier ($15) , and turn left upon disembarkation at St. John’s jetty. Book here. 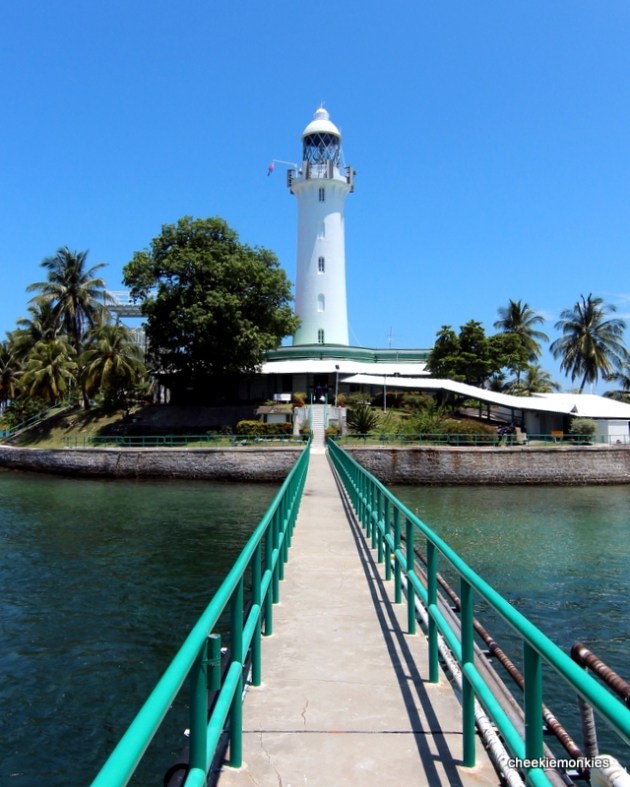 The Story: The only towering feature that is visible from a distance is the Raffles Lighthouse in shining white. The Lighthouse has been operational since 1855 to warn incoming ships at night when they are reaching the shore or shallow waters. 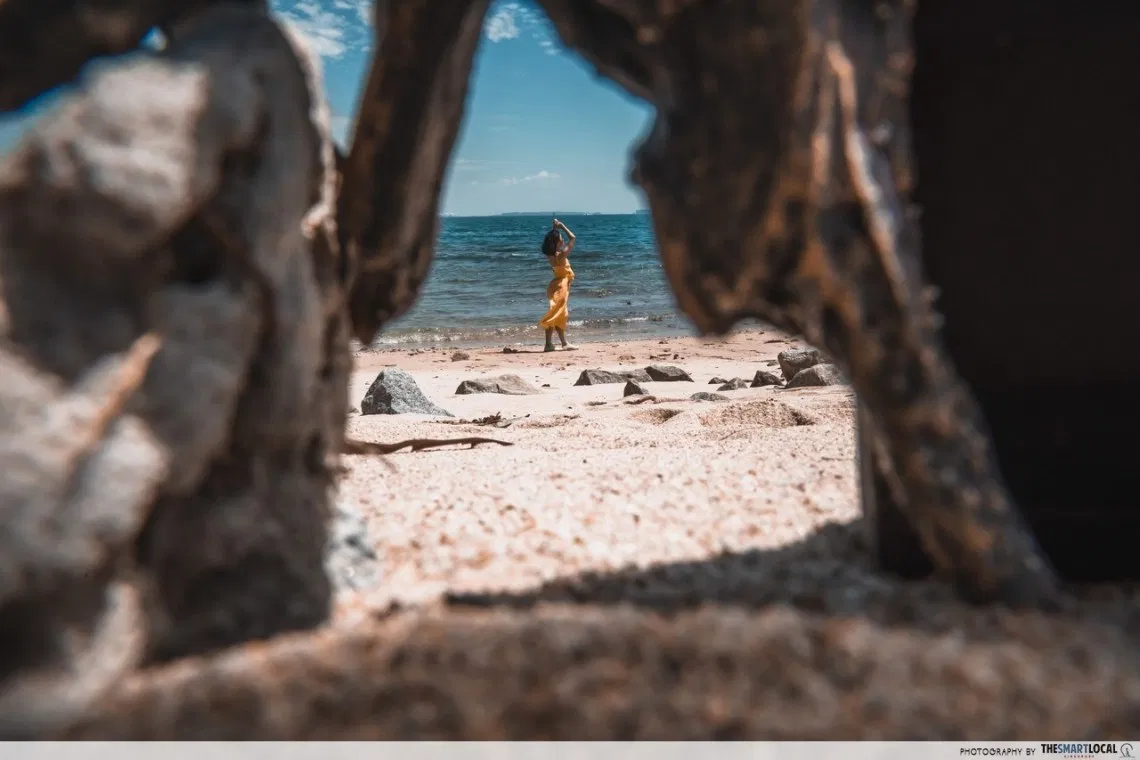 We tried to create IG-worthy pictures on this island – read about it
here.

Things To Do:Truth be told, a glimpse of this makes me think of Shutter Island. You know, that movie with Leonardo DiCaprio in it and everyone on the island is perpetually crazy? But hey, I’m not saying this is the same thing.

The island has restricted access to the public but the Maritime and Port Authority of Singapore organises the Singapore Maritime Week every year. The SMW is Singapore’s biggest maritime event hosting conferences and numerous activities. It is through this event that the island is open to the public with a guided tour. Visitors get a historical tour of the lighthouse and revel in crystal clear waters by the rocky shore.

Getting There: Depart on a ferry from Pasir Panjang Ferry Terminal when you sign up for a guided tour held annually organised by MPA. Check their full calendar of events* here.

* Events may be affected due to COVID-19. 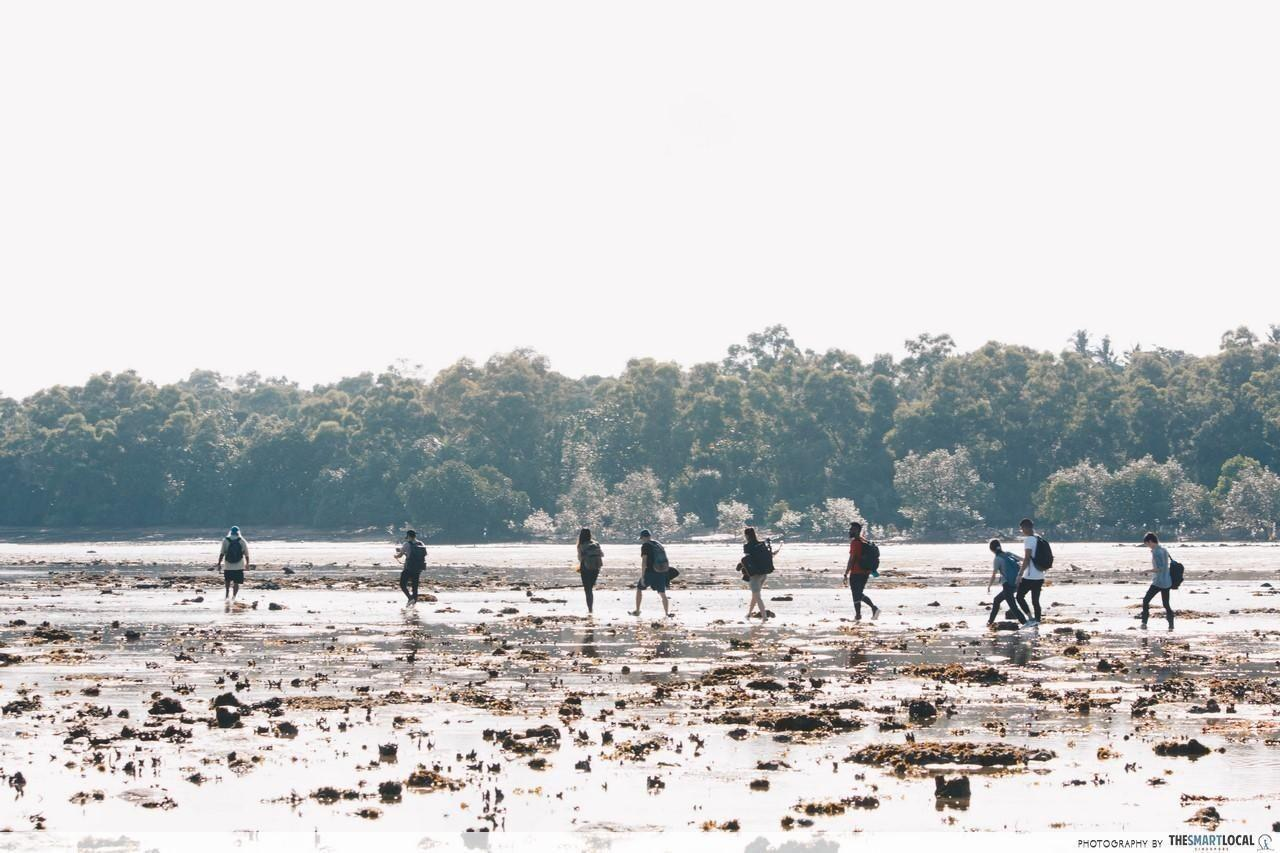 The Story: Pulau Semakau, or as it is more popularly known, Semakau Landfill, is Singapore’s first and only remaining offshore landfill site.

Things To Do: I know, a landfill site is nothing worth visiting, but don’t exclude this just yet. The landfill activities here only occupy the eastern side of the island, keeping the rest of the island full of untouched flora and fauna. Perfect for the eco-adventurer, interested visitors can book a tour with NEA who conducts guided nature walks.

With rich mangrove habitats and a healthy coral population, the island has become a site for nature research with a coral nursery on the island. Wait, corals have babies?!

Getting There:  You’ll have to get a permit NEA before visiting. As of the latest article update, the island is still closed off to visitors due to COVID-19. Check out this page for more updates. Once you have the permit, book a private charter boat priced from $400 for 12 people with Singapore Island Cruise. 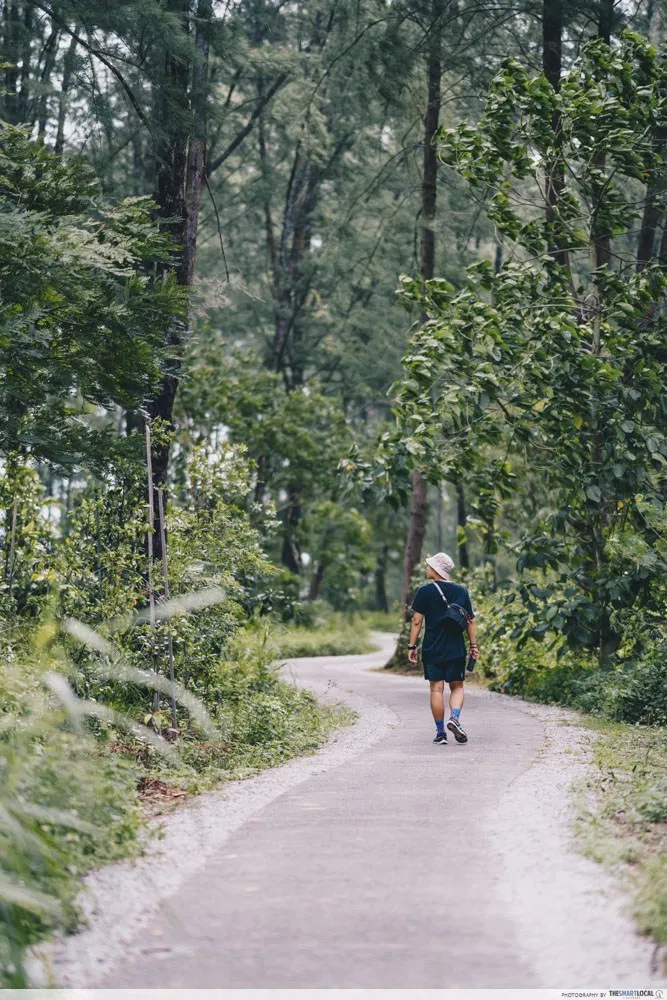 The Story: Nah, this is not the theme park in New York. In fact, a few entrepreneurs had plans to develop the island into the now famous Brooklyn theme park back in 1950. These plans didn’t see the light of day but the name stuck. Thereafter, the island was a popular picnic ground for locals. The Aw brothers of Haw Par Villa also once owned the island and built a mansion which now stands abandoned.

Also known as Pulau Serangoon, this island is scheduled to be launched as part of the new Watertown Punggol that is located next to Punggol Waterway. The 45ha area will be made into a commercial and residential site, with half of the island sporting a beach that faces the Johor Strait. 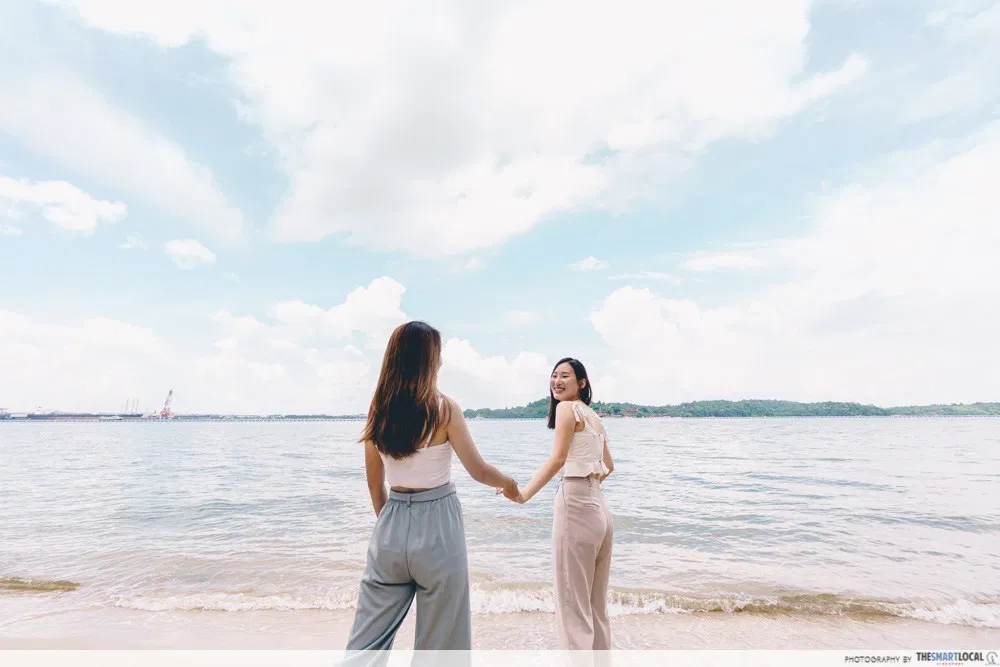 Things To Do:So there isn’t a ferris wheel or a carnival but it is instead a rustic slice of what could have been. The existing evergreens create natural forested walkways in the serenity where bird-watching is strongly recommended. There is also a small stretch of beach with a view of Pulau Ubin in the distance.

Getting There: Walk across the connecting walkway from Punggol Promenade Nature Walk.

Check out our articles on nature spots in North-East Singapore, and photo spots in the area. 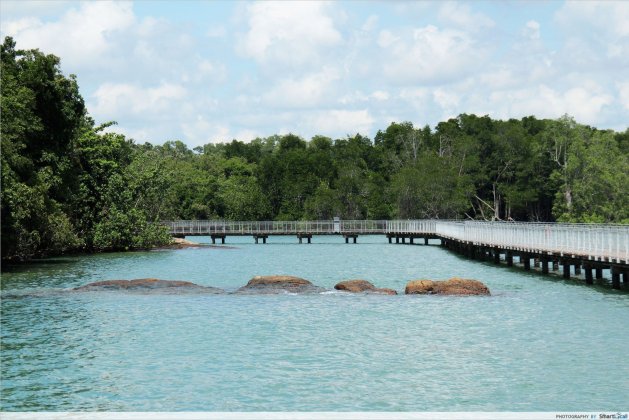 The Story:The most popular offshore island in Singapore after Sentosa, Pulau Ubin is a small island brimming with rich history. In direct translation, Pulau Ubin is Malay for ‘Granite Island’, attributed to the granite quarries that used to be in operation back in the day. This rustic slice of Singapore is what’s left to remind mainland residents of its origins 50 years back.

Things To Do: Relieve the rural flora and fauna with a tour of the Chek Jawa Wetlands ($60 for a group of 15 pax). And of course, you can never explore the island without going village-style.

Rent a bicycle at $5 – $35 per day, depending on bike model and store, and catch glimpses of hornbills and wild boars. For the more seasoned cyclists, Ketam Mountain Bike Park, Free Ride Skills Park and Dirt Skills Park are open areas for you to test those wheels. 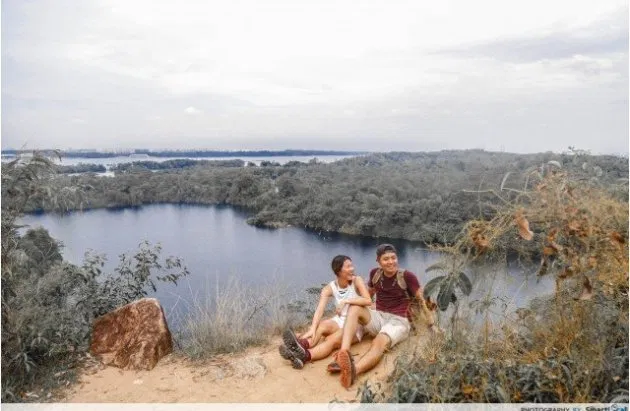 There are also hiking trails available – read more about our experience hiking up Ubin’s Puaka Hill. For more detailed guide on what you can do there, also check out our #InstaWalk trip to Pulau Ubin.

Getting There: Take a bumboat ride from Changi Point Ferry Terminal ($4)

The Story: In Hokkien, ‘kusu’ means ‘tortoise’ and Kusu Island is therefore named due to its shape resembling a turtle before land reclamation. Its mythical origin is believed to stem from a giant tortoise which saved a Malay and Chinese man who were shipwrecked. In gratitude, the men then built a temple and a shrine respectively. The island then has become a sanctuary for Muslim and Taoist worshippers who come here to pay their respects.

Things To Do: There is a literal meaning to the island, as it has various a tortoise sanctuary as well. I’m not a big fan of the reptiles and watching them must seem so exciting. Then again, it’s not everyday one gets to witness a tortoise invasion.

In spite of it being a site of rich heritage, there is also a beach and a couple of lagoons to swim in.

Getting There: Take a round trip from Marina South Pier ($15). Book here. 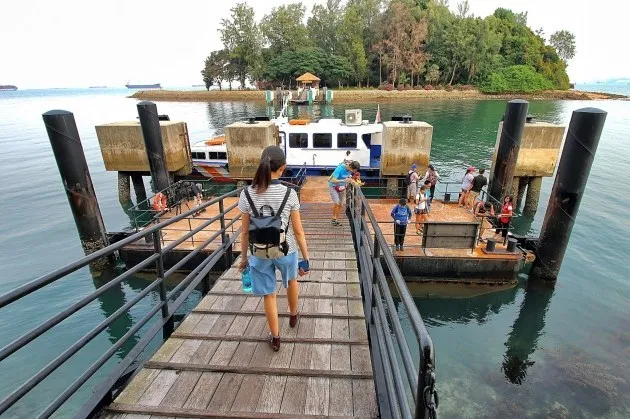 The Story: These islands talk about blood over water – literally. Legend has it that the Sisters’ Islands got their name from two sisters who were about to be forced into marriage by pirates. The girls swam away in an attempt to escape but unfortunately drowned, and two islands emerged from the spots where they were last seen. 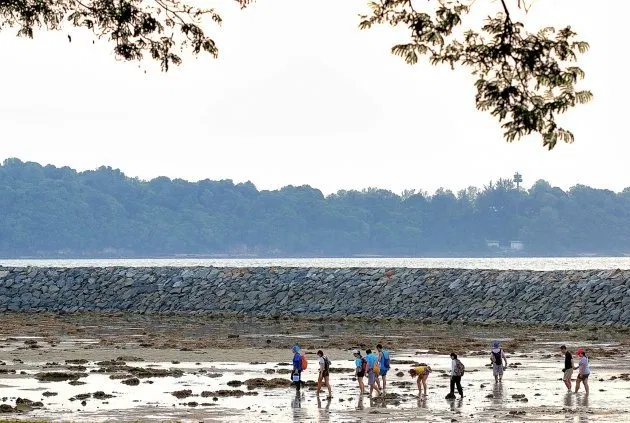 Things To Do: These days, the islands are good for a day of leisurely water activities. Get under the sea in your snorkelling gear and explore hard and soft corals while witnessing giant clams, sea horses, octopuses, and even black-tip reef sharks! A word of caution though – the currents can get really strong so take care not to get washed away lest you become an island of your own. *shudders*

Having recently undergone a revamp, the island is now a marine park. Take a look at TSL’s photojournal of Sisters’ Islands Marine Park here and decide if it’s worth a visit!

Getting There: Hire a private charter boat with Singapore Island Cruise at $200 for 12 people, for a 2-way trip.

P.S. Be careful when on the island as the monkeys are known to be aggressive there. 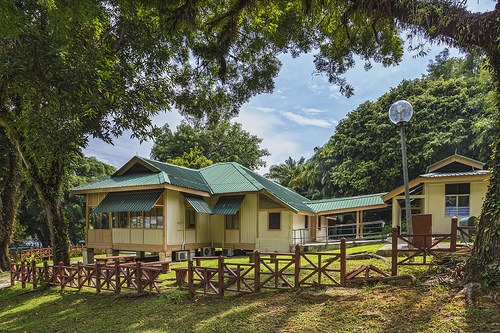 The Story: Once home to cholera patients, lepers, and other misfits, St. John’s was once a quarantine station for fellow ill-stricken immigrants from Mecca returning to Singapore. Thereafter, for better or for worse, the island became a rehabilitation centre for opium addicts.

Things To Do: Will you find traces of opium, you wonder? I kid. Don’t let its history scare you – St. John’s Island is now home to three of the cleanest swimming lagoons of all the offshore islands.

Feel free to take a dip around the island’s shores and watch marine life surround you with its colourful corals and various sea creatures. Or, for those not looking to get wet, picnic grounds and trekking routes are also available on the island where you can catch a view of the mainland’s skyline.

Staying overnight is made possible with chalets that include a kitchen at a rental cost of $21.40 per person per day in their Eagles chalet. For 6 times the company, the Otter campsite offers accommodation with basic cooking facilities suitable for a BBQ party at $90.95  per day on weekdays and $139.10 per day on weekends.

Getting There: Take a round-trip ferry ride from Marina South Pier ($15). Book here. 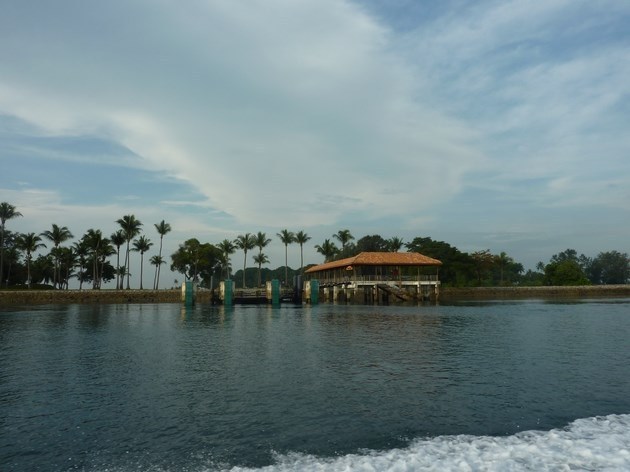 The Story: Literally meaning “ghost island” in Malay, there’s nothing supernatural to this story. In fact, its name is in reference to the middle part of the island which disappears under water during high tide.

Things To Do: The island is popular with diving enthusiasts, namely the Hantu Divers who organise diving trips on their website. I have a friend who frequently travels all the way to neighbouring SEA islands just to do the exact same activity right here. Sure, it’s nothing like Into the Blue where you get to find treasure and have a bikini-clad Jessica Alba, but no one’s stopping you from doing the same.

If you’re not the diving sort like yours truly, the waters are also perfect to snorkel in and watch marine life such as clownfish and seahorses. Camping overnight is also available with a permit from Sentosa Leisure Group – make sure to apply at least 7 days in advance by emailing administrator@sentosa.com.sg.

Getting There: There are no public ferry charters to the island. To get there, sign up for a diving expedition with the Hantu Divers or hire a private fast boat with Singapore Island Cruise for $400 for 12 pax, for a 2-way trip. 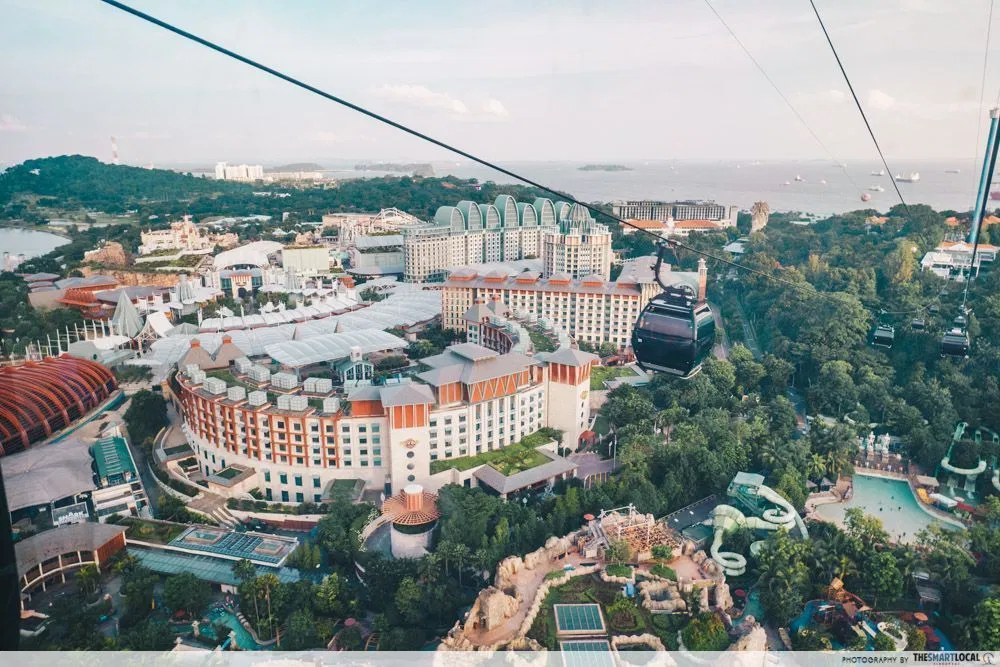 The Story: Last but not least, who could forget Asia’s Favourite Playground? Sentosa has had a rich history way before the Japanese Occupation in 1945. Today, the country’s most popular island is visited by approximately 20 million people a year and is home to its best beaches, hotels, the Resorts World Sentosa, Universal Studios Singapore and the like.

Quayside Isle in the evening

Things To Do: At Sentosa, it’s fun at every corner. Go sunbathing, swim in the ocean, visit heritage sites, party on a yacht, play golf, ride roller coasters, go to a beach club … and many more! “I’ve never been to Sentosa,” said no Singaporean ever. Many people still have never visited Quayside isle. We recommend checking this sweet enclave out. It’s like a little expat colony. 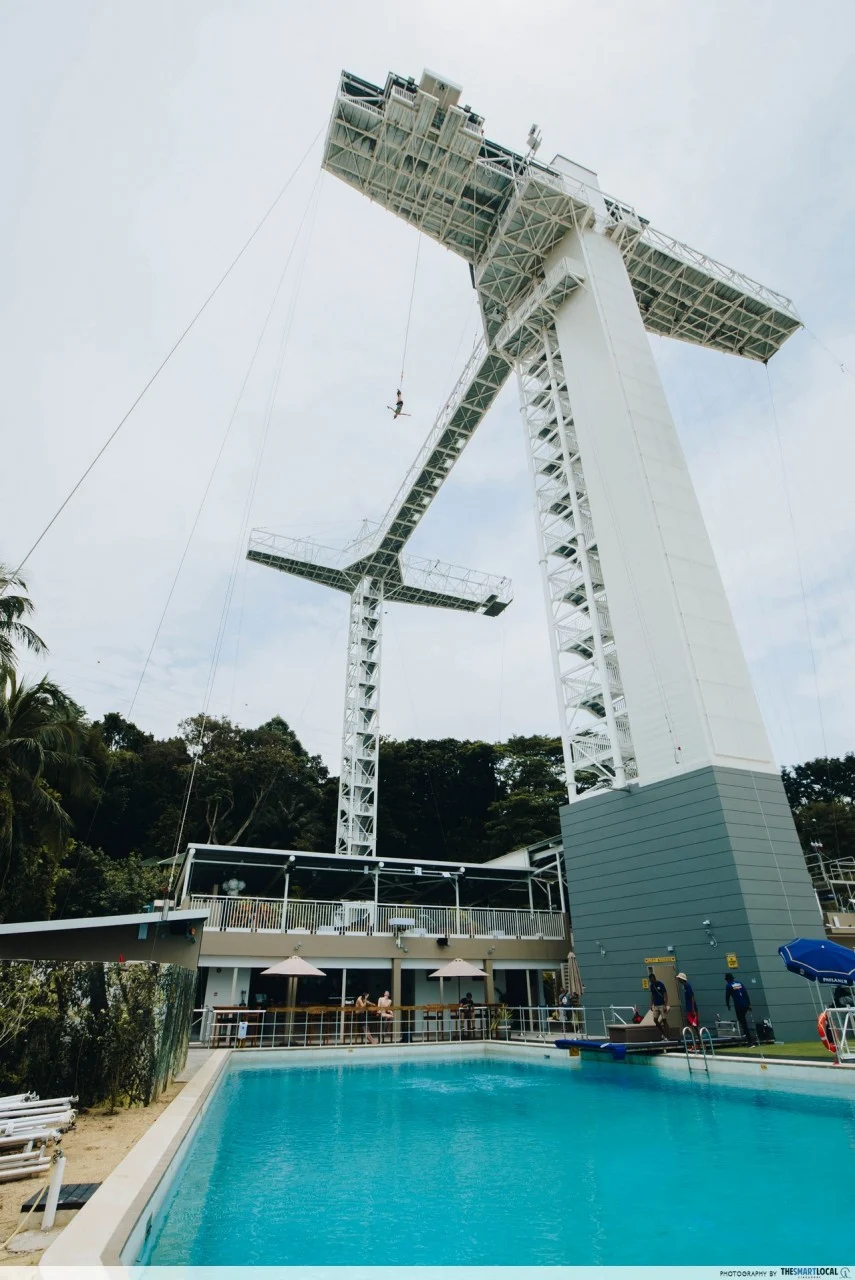 Getting There: Hop on the Sentosa Express ($4) from VivoCity, walk through the Sentosa Boardwalk or, if you’re looking to kick off your island adventure with a bang, sit on the Cable Car departing from Harbourfront Tower II ($29.50).

Officially, Singapore has over 60 natural and man-made islands off the mainland! Also, did you know that Christmas Island located in the waters north-west of Australia was once owned by Singapore before handing over the sovereignty to Australia in 1957?

We’ll continue to show you parts of our beautiful country that you never knew!

For more outdoor adventures in Singapore: 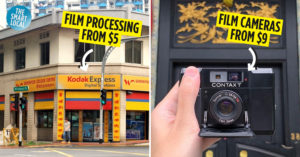 How To Buy Your First Film Camera In Singapore - A Beginner’s Guide For Non-Experts & Hipsters
I May Have A Video Game Addiction But That Doesn't Mean I'm Wasting My Life... 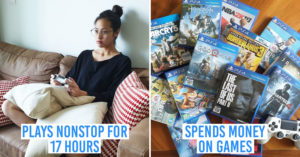