Admittedly, we spend most of our days staring at our laptop screens – so let this be your sign to take a break and head outside. Whether it’s a light jog in the park or a round island cycling adventure, there’s a tonne of Park Connectors (PC) in Singapore perfect for those in need of a change of scenery.

From unblocked views of Johor to a zen park that’s perfect for yoga sessions with the gang, we’ve curated a list of 8 most Insta-worthy PCs that are worth a visit. And if you’re unfamiliar with the dos and don’ts at a PC, we’ve got you covered too. Read on to find out more: 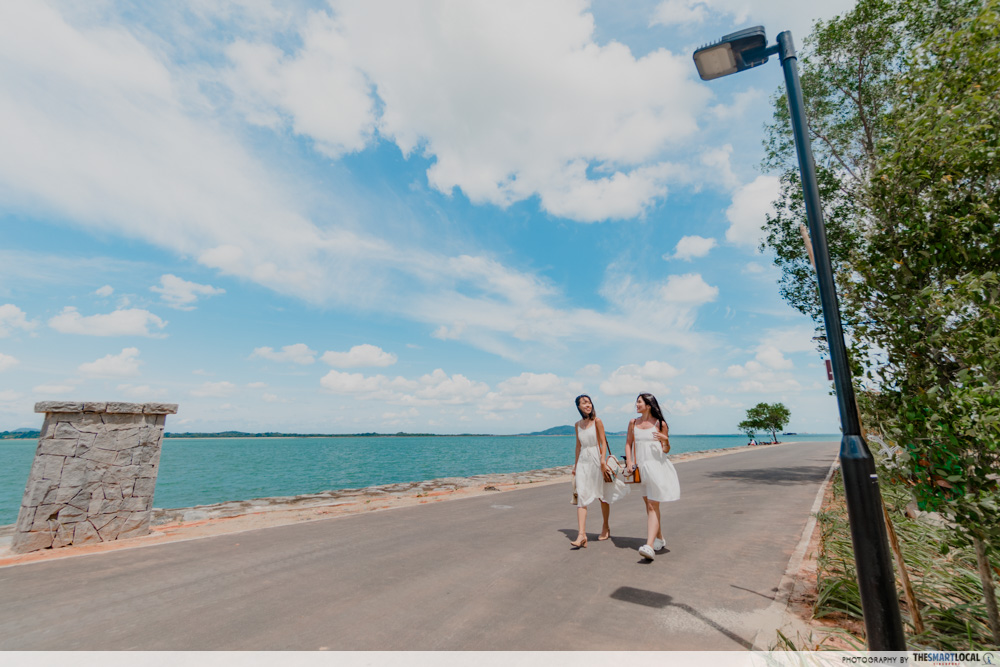 Changi is home to many sights, from the haunting Old Changi Hospital to the swanky Jewel Changi Airport. And if the line where the sky meets the sea is calling to you, then Changi Bay Point is a must-visit for when you’re in the East. 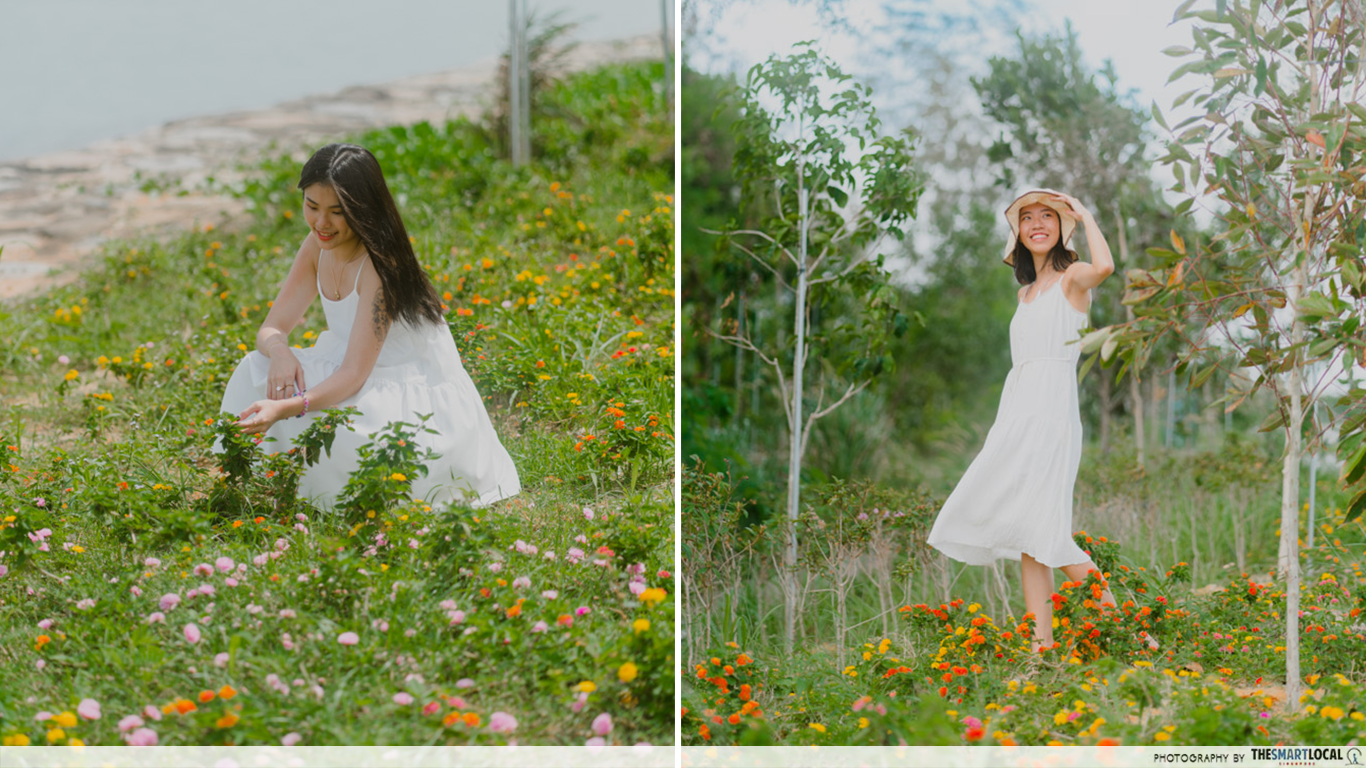 There are flower fields for you to snap #cottagecore pics.

Set along the Changi Bay PC, the place boasts stunning photo ops at every angle you turn, be it the cycling bridge, pathways, or pavilion. You’ll want to leave no stone unturned as even the public washroom here is photogenic – think Maldives-esque vibes with its wooden boardwalks. 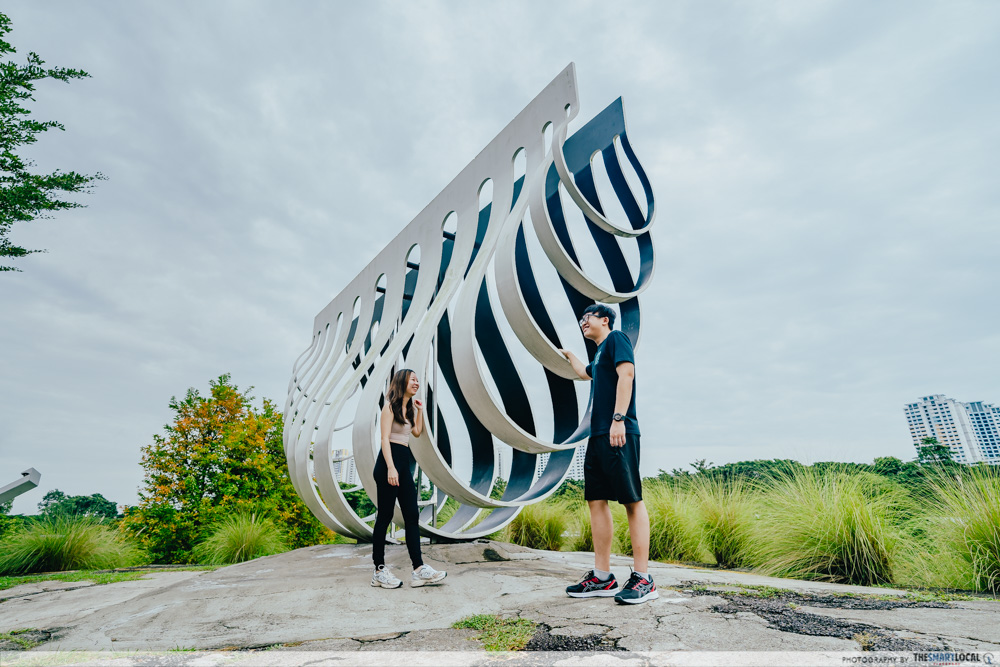 Connecting Bishan and Ang Mo Kio, the Bishan-Ang Mo Kio Park is pretty huge. In fact, the park even has the Kallang River flowing through it. Here, you’ll find that urban life meets green oasis with cool features including this Recycle Hill, where you can chill with this award-winning giant metal sculpture. 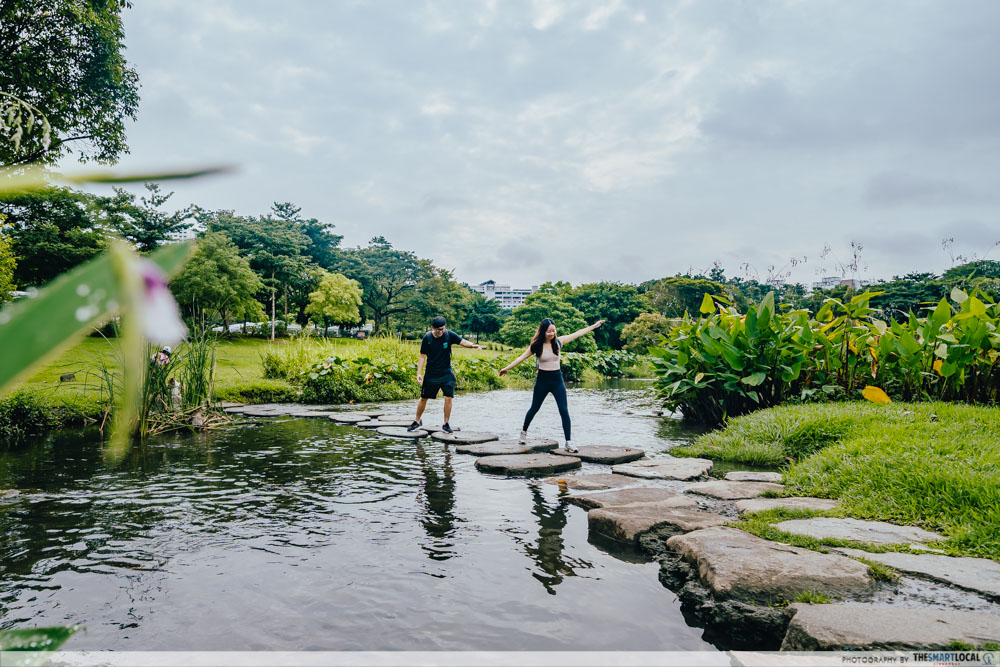 Hop along the stepping stones, or sit by the riverbank and enjoy the sounds of the flowing water. You’ll be able to spot schools of fish, and even a heron or two during your time here. 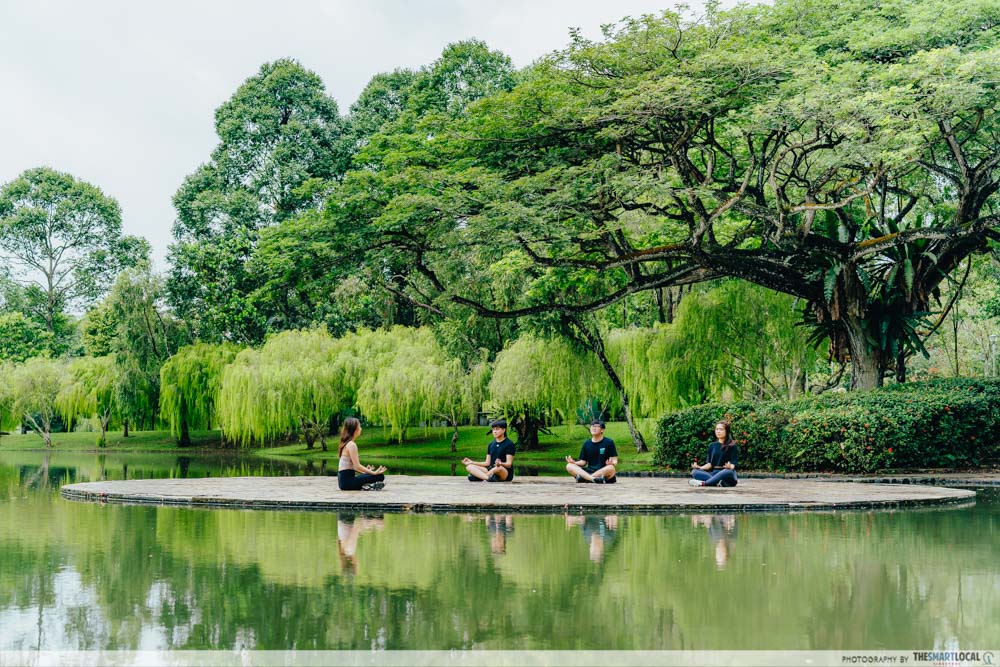 Yoga enthusiasts can also head to the pond garden, where there’s a “floating” platform in the middle of the river. Time to let out all your stress and worries through the recitation of calming mmms and ahhhs. 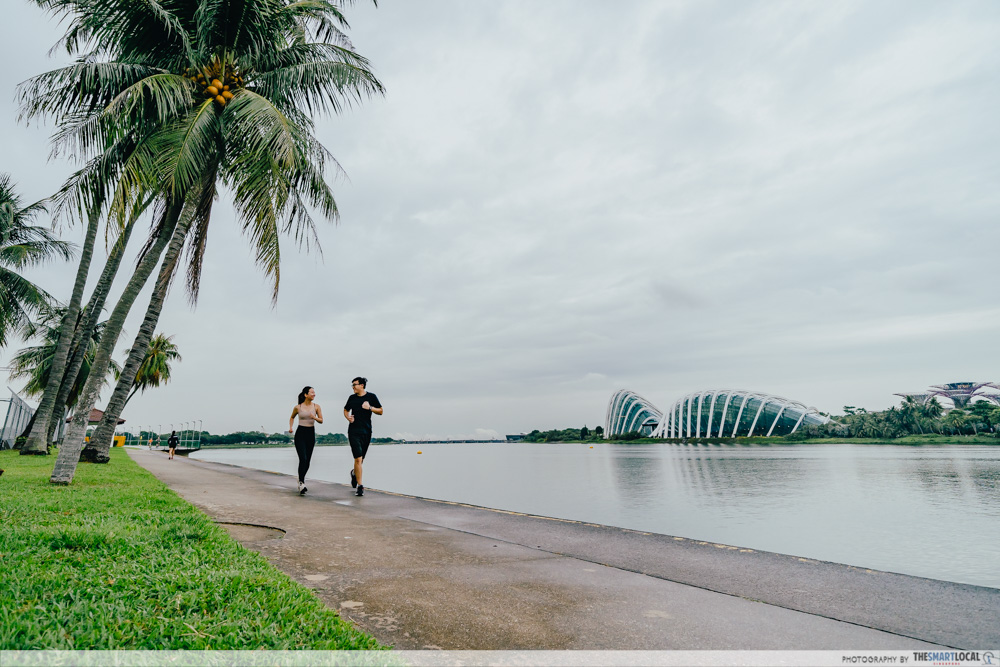 Many of us identify the Marina Bay area as the go-to place for luxury shopping and tourist attractions like the casino or the Flower Dome. But just across the riverbank is the Marina Promenade Trail that’s part of the 150km Round Island Route, with its quieter surroundings that make it perfect for a jog. 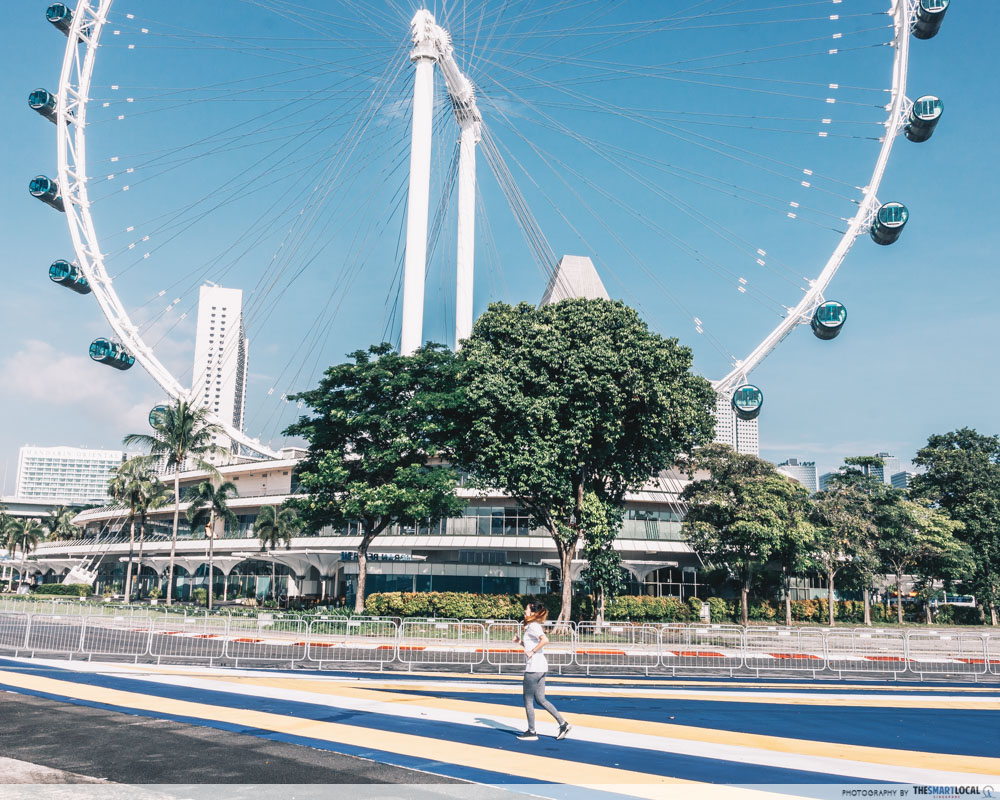 You’ll find palm trees lining the PC, with unmissable views including Gardens by the Bay and Marina Bay Sands. On the other side stands the Singapore Flyer, so close you could include it in your Insta Stories. Just remember to be aware of your surroundings when documenting your time here, lest you obstruct the path for other users. 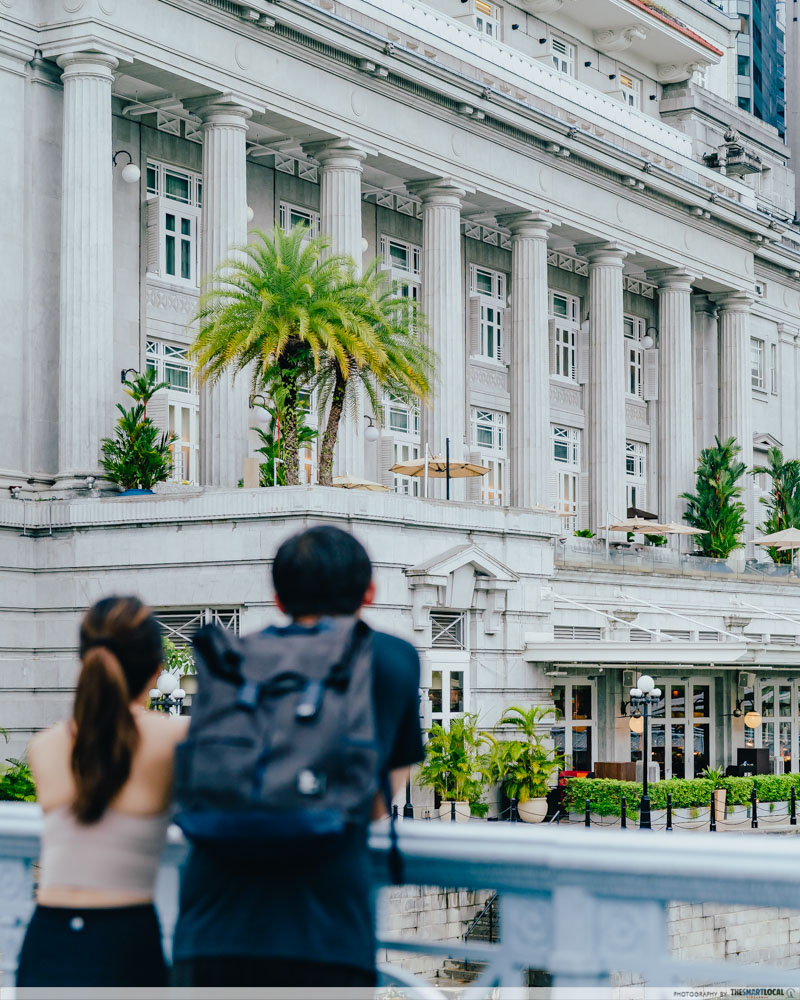 To get this shot, head to the Anderson Bridge and angle your camera to have the Fullerton Hotel as the backdrop.

Our Little Red Dot offers more than just blocks of high-rise buildings and shopping malls. Follow the Robertson Quay Loop and it’ll lead you to the Civic District precinct. Here, you’ll get a refreshing change of surroundings with the colonial-style architecture peppered around the place. 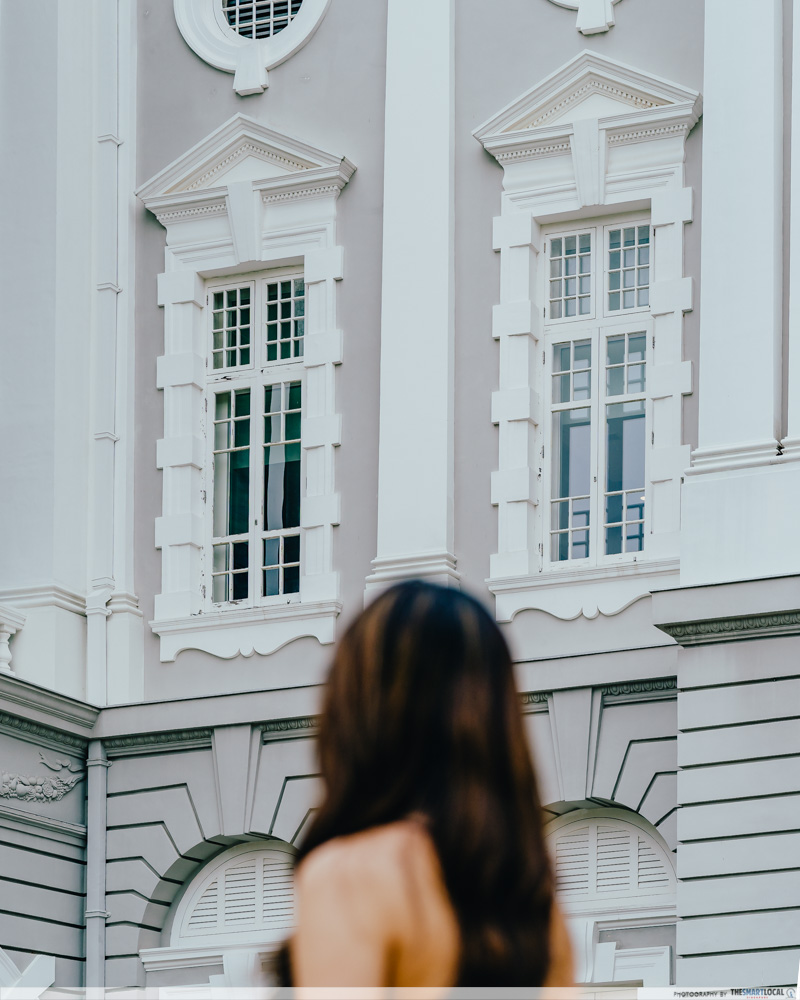 Pose in front of buildings like the National Gallery Singapore, Victoria Concert Hall and Theatre, and Asian Civilisations Museum and you’ll definitely fool your friends into thinking you’re in Europe. Throw in a très chic caption and you’ll be good to go. 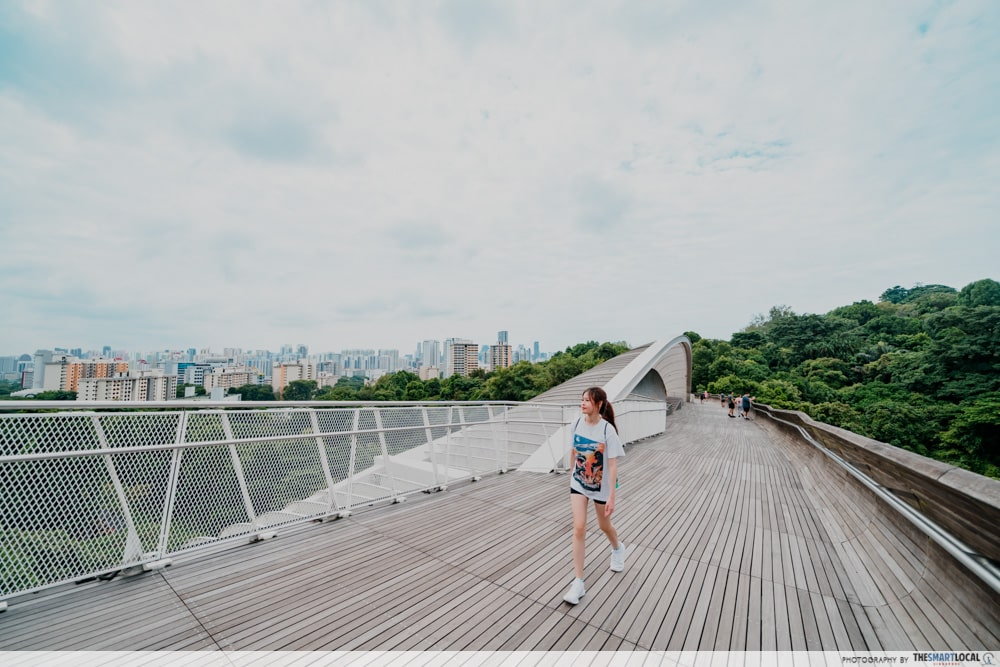 Avid hikers will be familiar with the Henderson PC, and more so the famous Henderson Waves that you’ve probably come across on your IG feed. Standing at 36m above ground, this PC has been crowned the highest pedestrian bridge in Singapore, with aerial views of the surrounding greenery and city skyline. 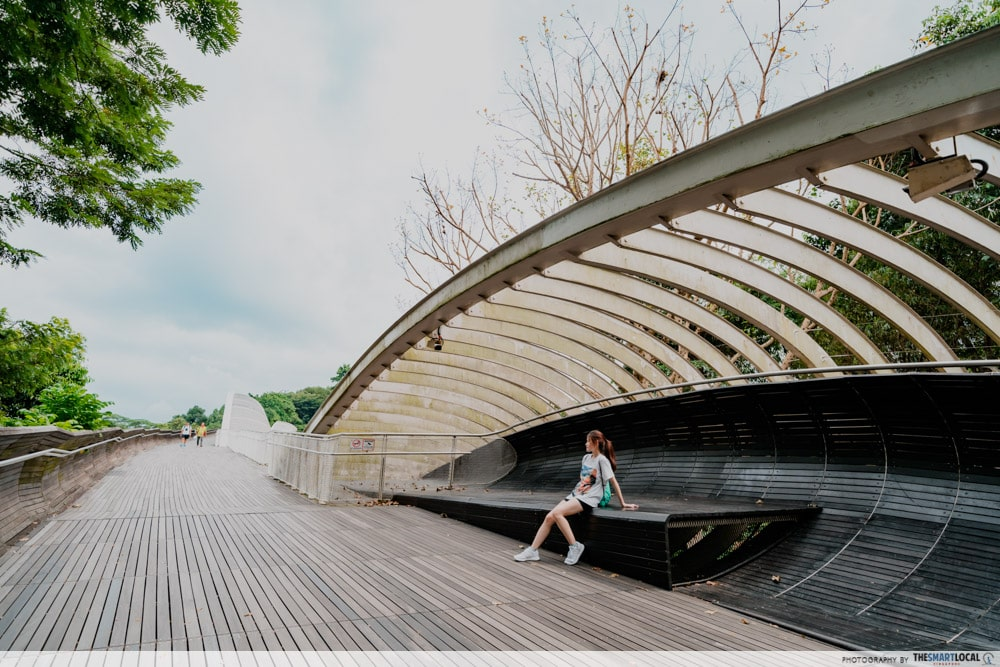 Since the bridge is above ground, you’ll be able to take your fitspo OOTDs from unique angles without needing to Photoshop out any stray buildings in the background. The place is currently under maintenance, but it’s expected to be completed by 31st October 2022, so you can bookmark it for future hangs. 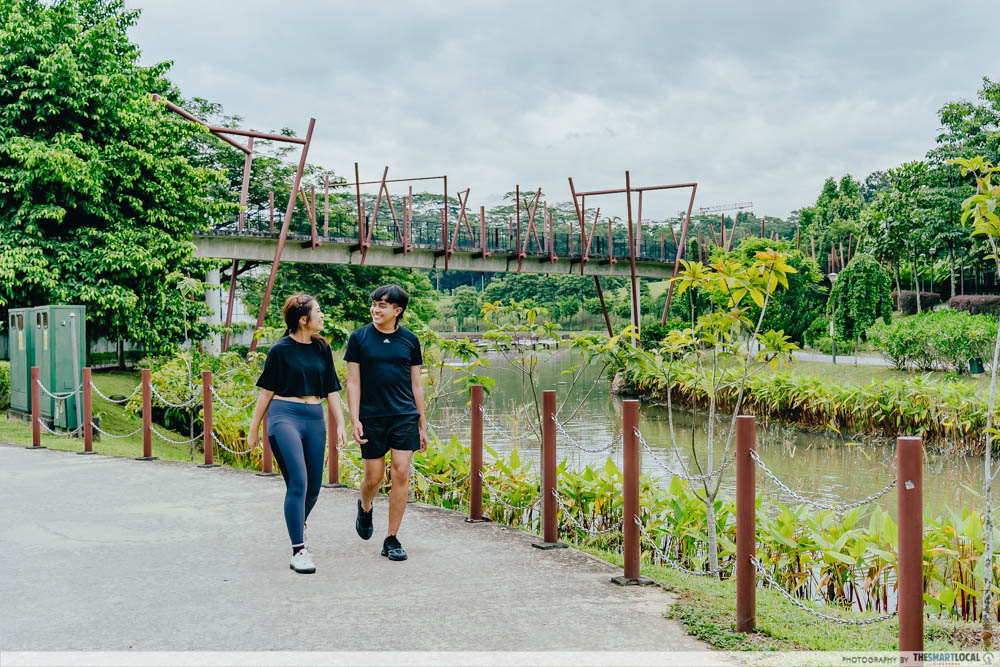 Since the park is in the heart of the Punggol neighbourhood, you can expect to see plenty of joggers and cyclists at the shared pathways.

Once known to be just another station on the North East Line, Punggol has since brought their A-game with the Punggol Waterway Park that’s part of the North Eastern Riverine Loop. There’s much to check out here, from cycling along the sensory garden to the Recreation Zone that’s great for the kiddos. 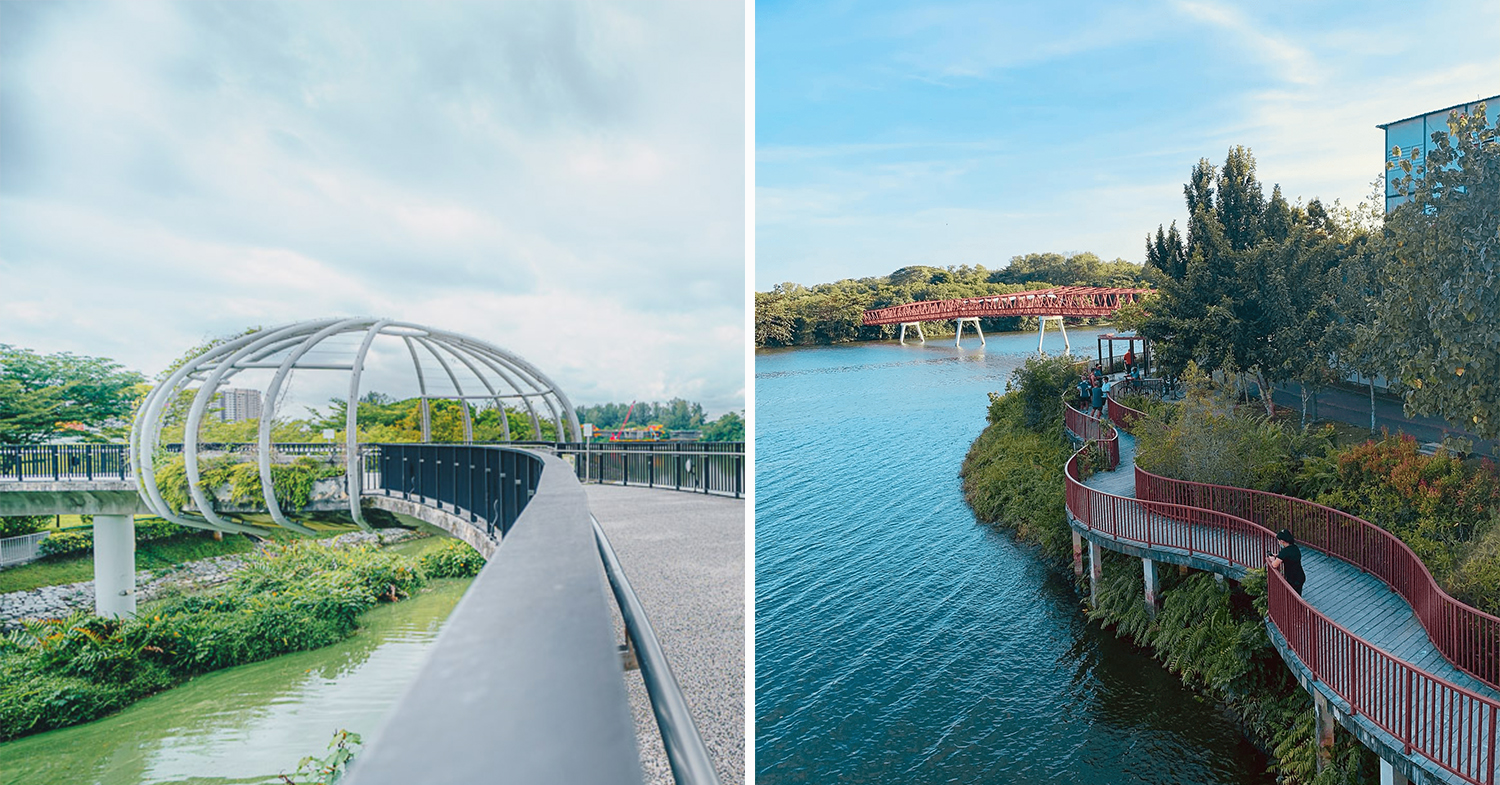 The Jewel Bridge (left) and the Sunrise Bridge (right).
Image adapted from: @seagull_istari

But what sets this park apart from the others would be the unique bridges found here, including the Jewel Bridge and the Sunrise Bridge. You’ll be able to spot these along the PC, where you can snap quirky photos with these architectural beauties. 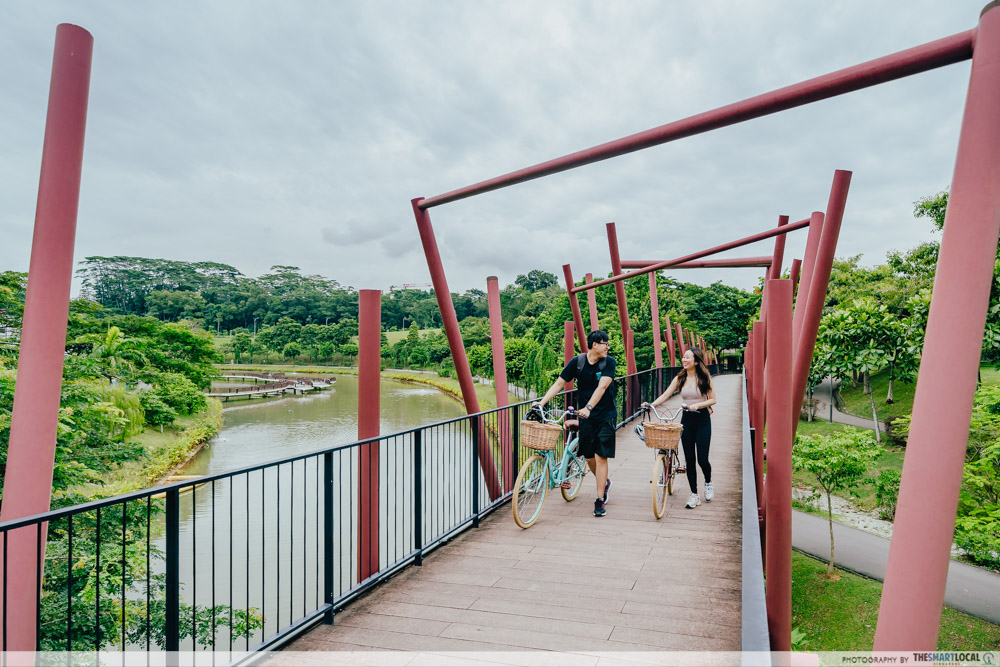 The Kelong Bridge pays homage to Punggol’s past heritage of being a fishing village.

And since these bridges aren’t as wide as the shared pathways, cyclists are required to dismount and push their bikes when crossing over. But that’s not to say you can’t take chio pics either, as you can pose next to your 2-wheeled companion. 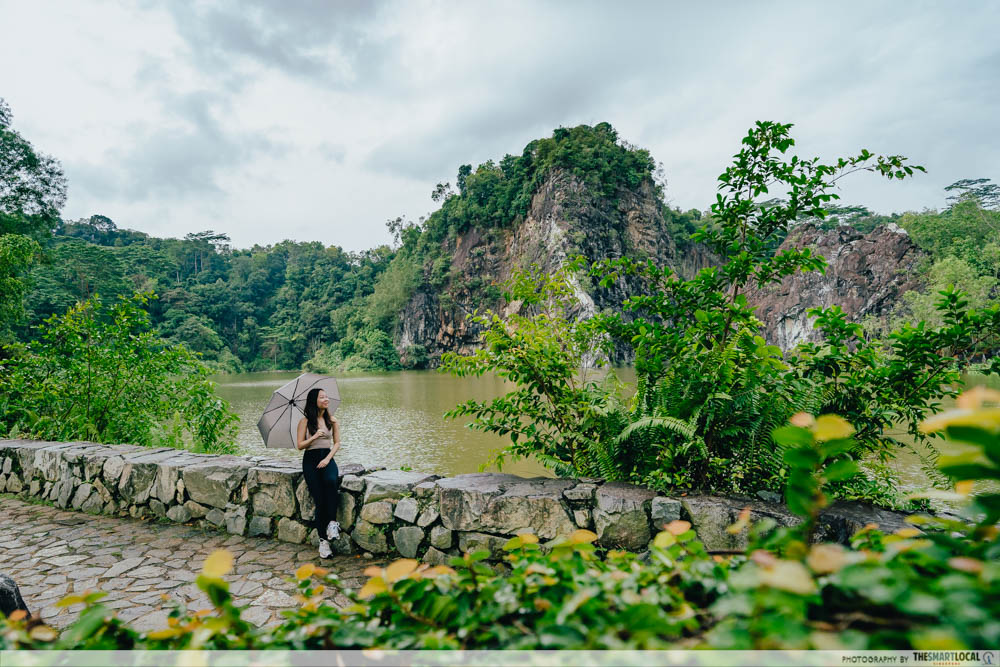 A taste of China without having to pay for pricey plane tickets.

Truth be told, the Bukit Batok Town Park is pretty far out if you don’t stay in the West. But that’s not to say you should forego a visit here, as it’s a charming location housing cool rock formations you won’t commonly come across. Located along the Bukit Batok PC, this place has been dubbed “Little Guilin” for its close resemblance to the actual Guilin in China. 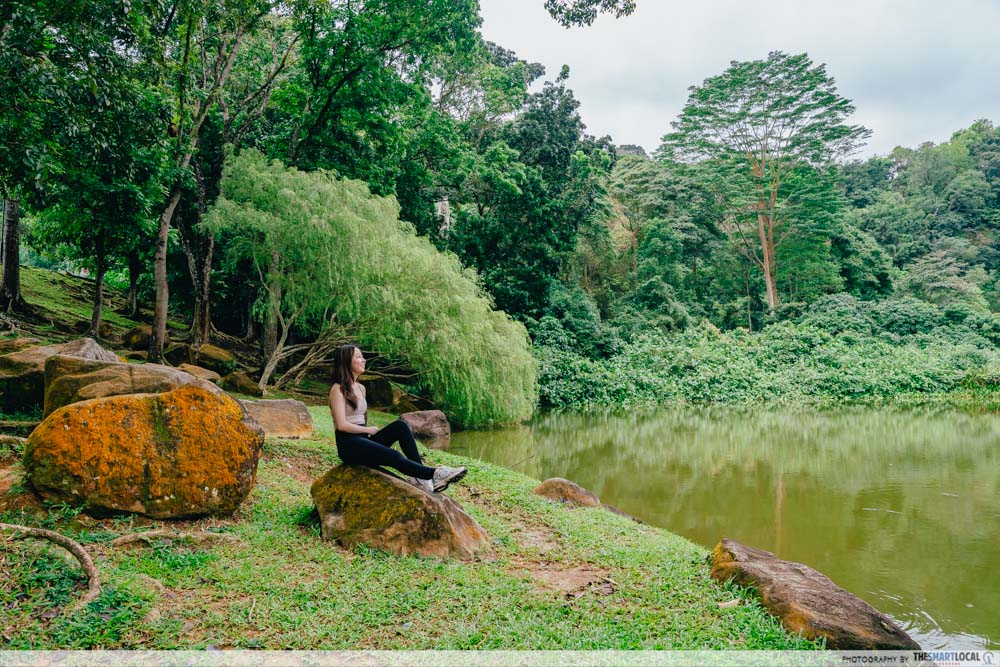 There are giant rocks along the riverbank for when you need to rest and take a breather. Or, set up a picnic mat on the grass and have a quaint lil’ picnic with your pals. 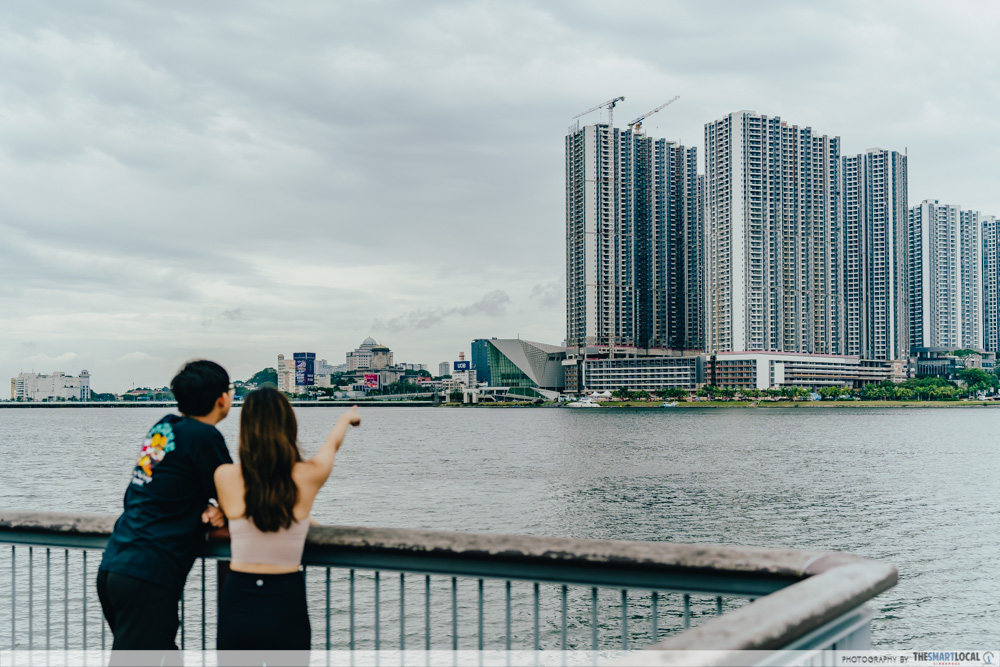 The Woodlands Checkpoint isn’t the only place you can get a glimpse of our neighbouring country. Part of the Northern Explorer Loop, the Woodlands Waterfront Park is another spot where you can get unblocked views of Johor, without the traffic jam. 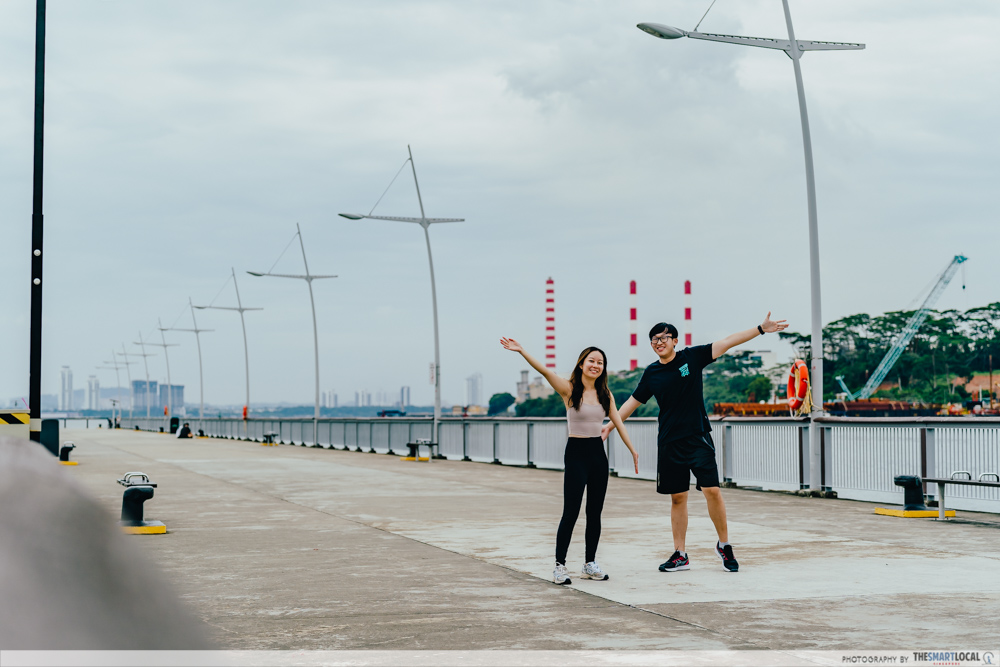 For the best sights, we recommend you to head to the jetty. It’s also the longest jetty in Singapore, so you can take your pick along the walkways to chill and admire the scenery. 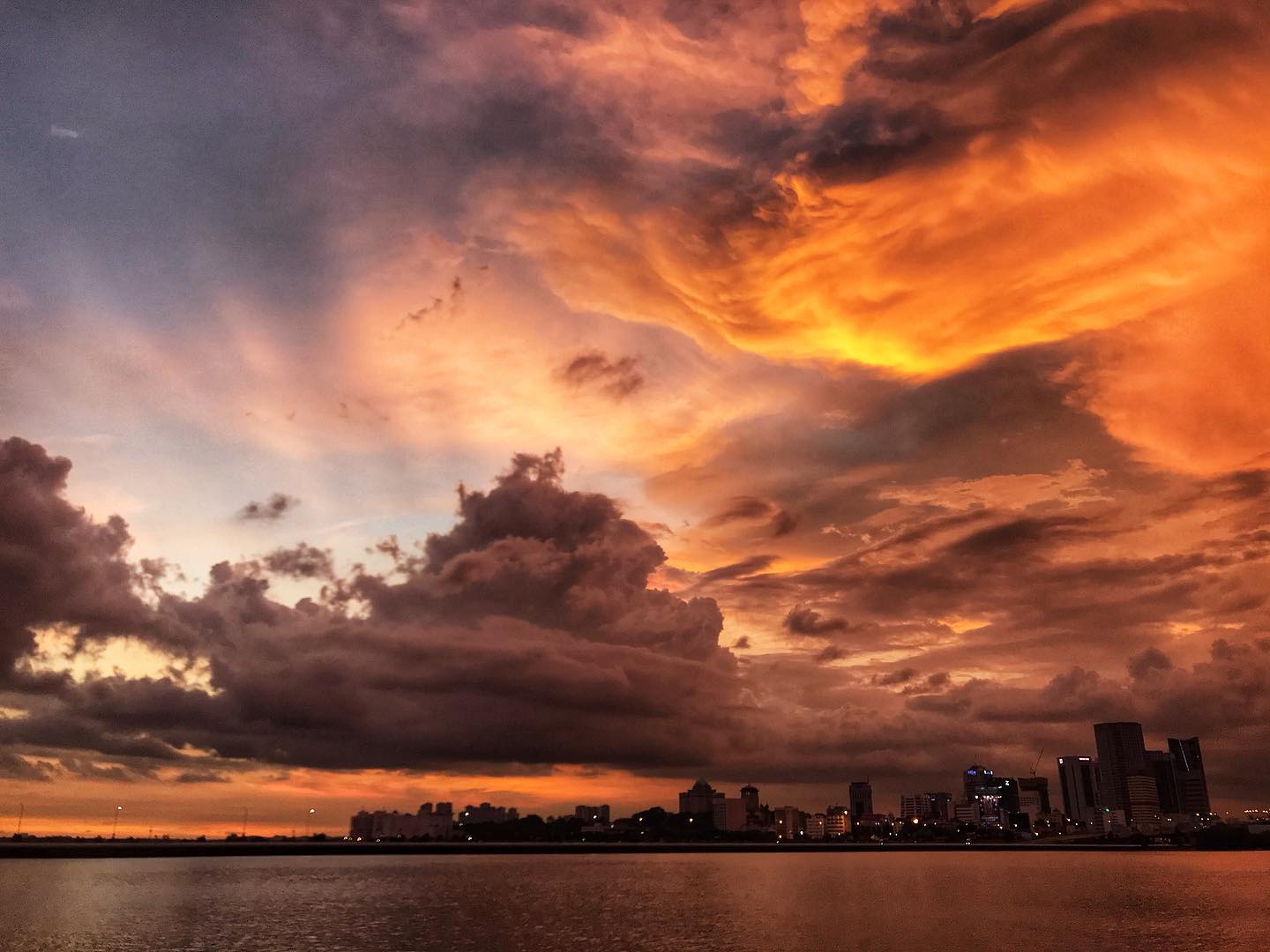 Aside from that, you can stroll along the pathways that span across the whole park. And if you happen to be there during sunset or sunrise, you’ll be treated to the jaw-dropping sight of the egg-yolk-coloured skies. 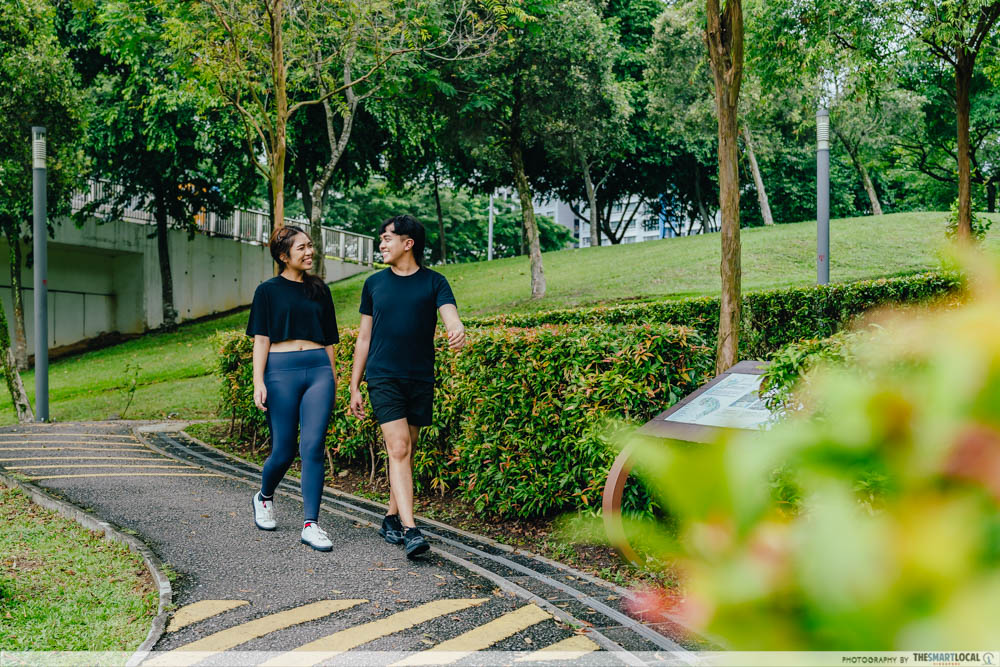 You don’t have to limit your workouts to the 4 walls of a gym. Instead, consider heading out to your preferred PC – you’ll find that they are nothing short of gorgeous from every angle. And to make everyone’s experience a safe and pleasant one, NParks has launched their latest campaign to spread the word about proper usage of these places. 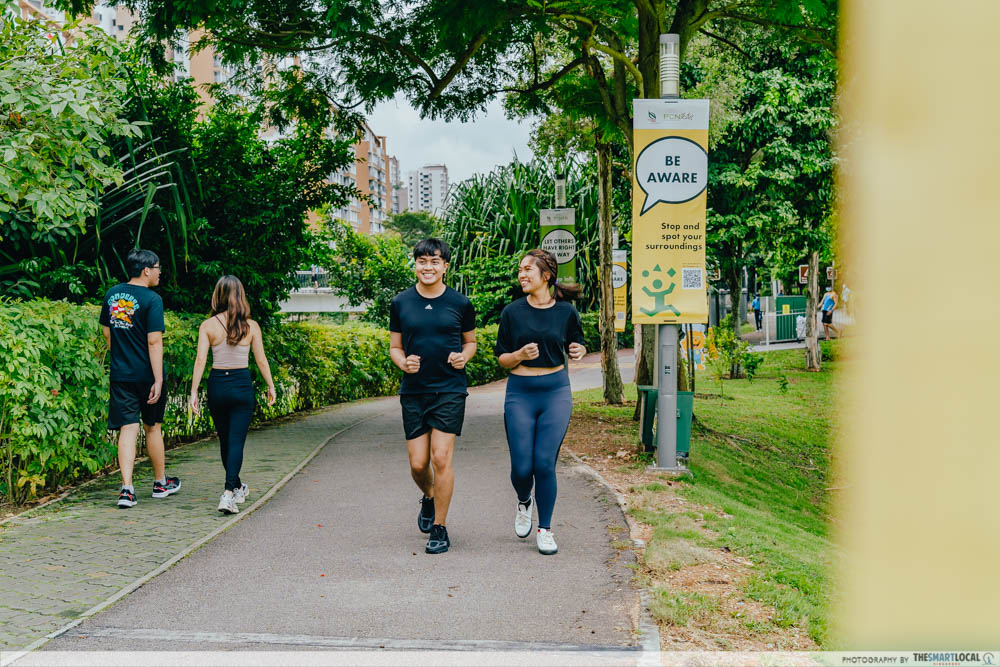 Spot these green and yellow banners around the parks – they serve as reminders to be gracious and considerate of others who are sharing the pathways.

For one, it’s vital to have spatial awareness to avoid unwanted accidents. You’ll want to keep left on your designated path when going at a slower pace, and only veer out to the right when you need to overtake. 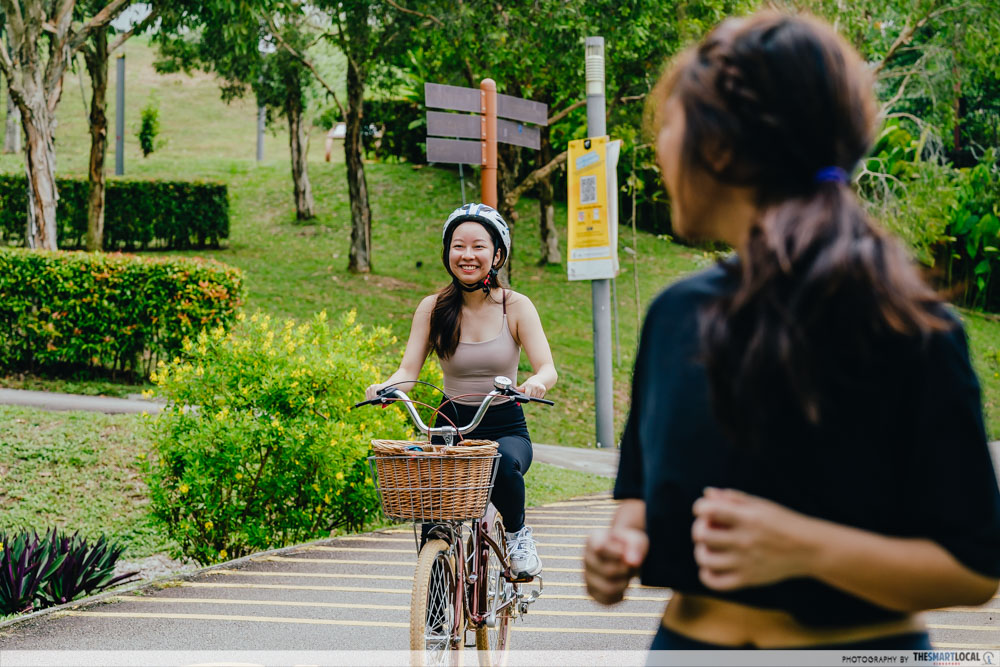 Pathways are shared amongst everyone regardless of the speed they’re going at.

Another tip to remember is that PCs aren’t racing tracks – so this means no zooming around as all users should comply with the maximum speed of 25km/h, or 10km/h at selected paths. There are also demarcated Attention Zones in the parks, whereby cyclists and PMD users should reduce their speed and give way to pedestrians. 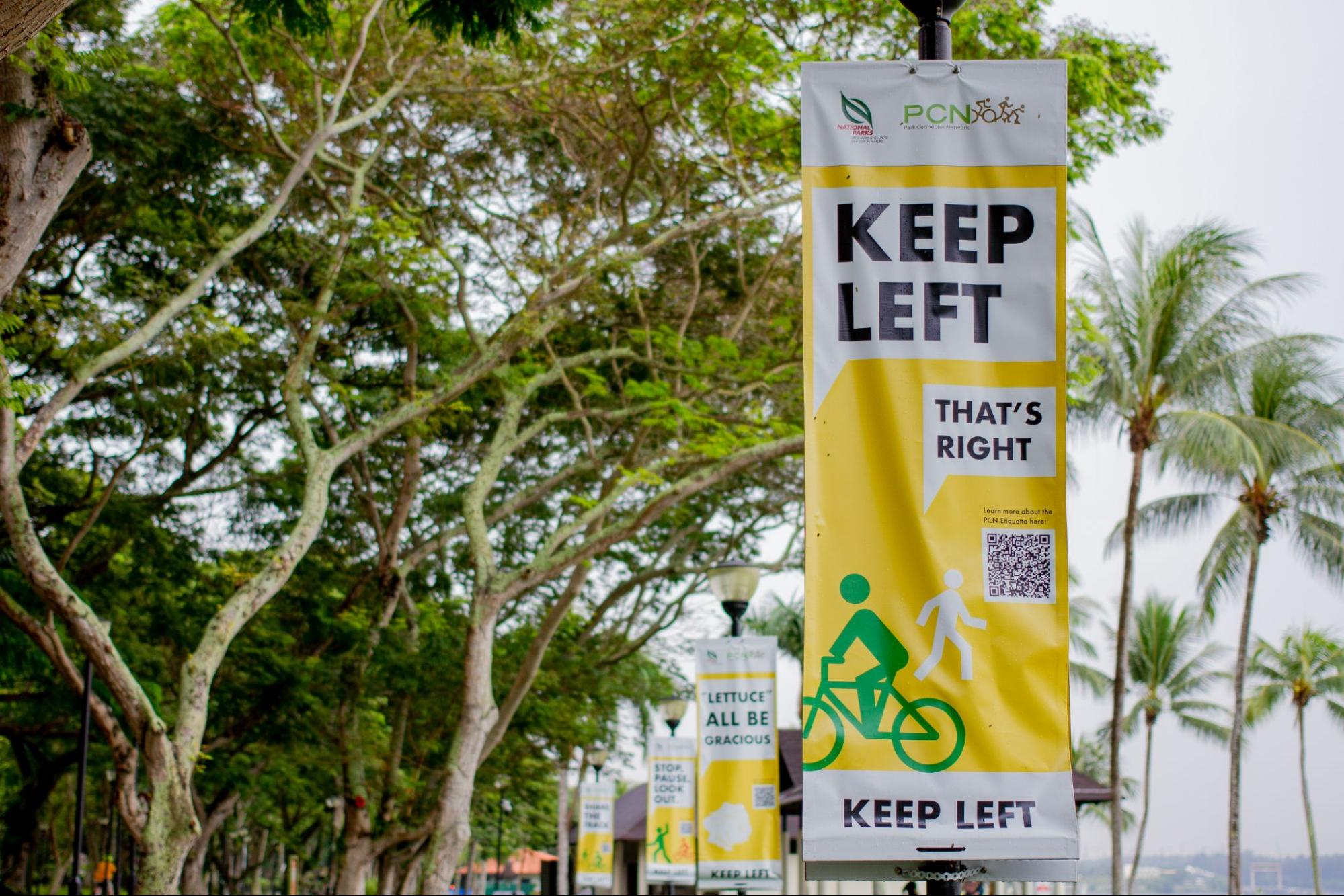 We’ve all been #blessed with the numerous picturesque PCs that motivate us to get up and head outside for a much-needed cycle or a mooch around the park. And these little steps we take to be gracious and considerate of others will go a long way to making Singapore a City in Nature.

Find out more about PCN etiquette

This post was brought to you by NParks.
Photography by Brad Lee. 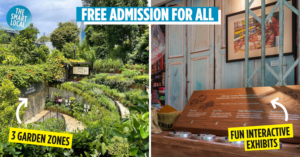 Fort Canning Has A New Heritage Gallery & Spice Garden To Hit Up On Your Next Museum Date
South Korea Will Drop Pre-Departure Testing From 3rd Sep, Easier & Cheaper Travels For Singaporeans 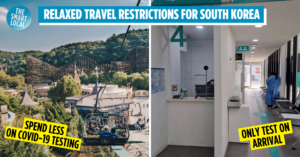