Blessed with a Park Connector Network (PCN) that stretches well over 300KM, cyclists in Singapore have a plethora of routes to choose for weekly escapades. But for seasoned riders who’ve explored every bit of the network from Jurong to Changi, these lesser-known cycling routes will bring equal parts challenge and adventure to your next expedition.

From tranquil bicycle paths at Rower’s Bay Park to the tough, meandering slopes of the Southern Bumps, we’ve listed these seven lesser-known cycling routes in Singapore according to difficulty:

Note: Some routes listed in this article include public roads. TSL encourages cyclists to obey all LTA rules and guidelines including wearing a helmet and keeping to the left side of the road.

Check out our other articles on cycling in Singapore: Serving up sweeping vistas of Seletar Reservoir, Rower’s Bay Park is a hidden gem for cyclists and nature lovers alike. Isolated from PCN routes, the park might be small, but you’ll find that it’s big on aesthetics – prepare yourself for a deluge of DMs asking “where’s that?” on your Instagram page.

Secluded, tranquil and with 2KM of safe, dedicated cycling paths, this would be a top pick for cycling trips if you’ve got a young one in tow. But for extra oomph for your expedition, explore the nearby Yishun Dam, Seletar Reservoir or even “Singapore’s Last Fishing Village”, and end the day at one of the unique cafes just a stone’s throw away at Seletar Aerospace Park.

Also check out our article on unique places in Seletar. The view of Seletar Reservoir atop Seletar Rocket Tower 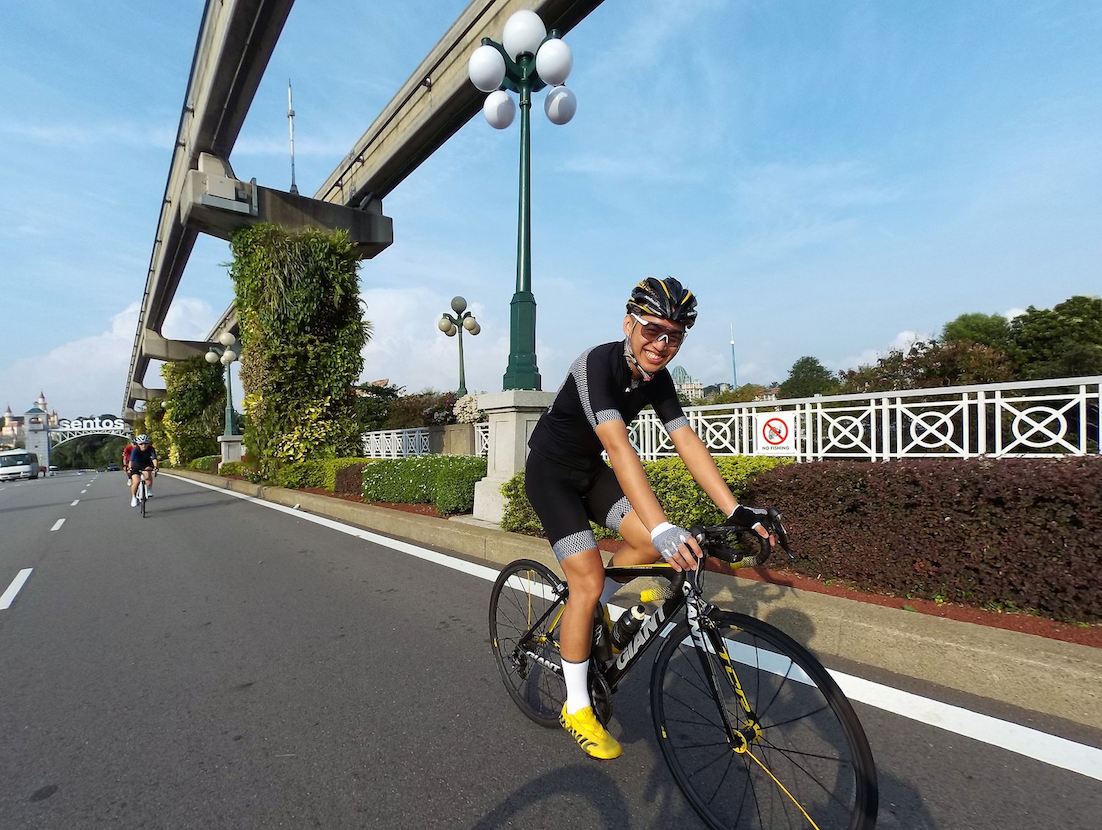 Sentosa might be the go-to destination for beach bums and thrill-seekers, but not many know that our favourite resort island is also home to one of the first dedicated bike lanes in Singapore. The mostly flat terrain and quiet roads on the island make it ideal for budding road cyclists.

For a bit of a challenge, make a right turn at the giant roundabout after entering Sentosa. You’ll start your journey with an uphill climb up to Fort Siloso, where you’ll get to cycle among WWII-era barracks, pillboxes and artillery, before descending past Sentosa’s scenic beaches and bustling crowds. To end, cool off at Quayside Isle and soak in its hushed, luxurious vibes over a drink or two. 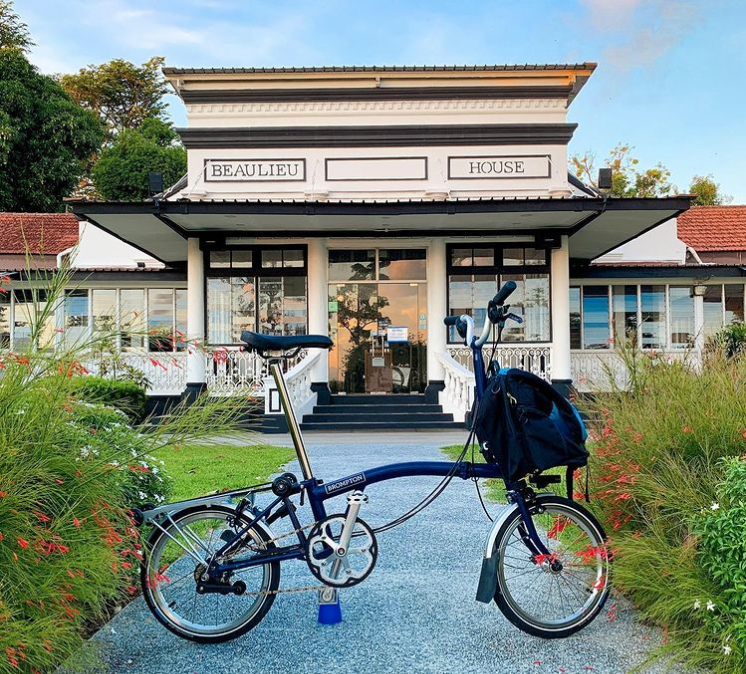 Sembawang might be one of our more quiet, unassuming towns, but it’s surely one of the top hidden gems on our little red dot for families, history buffs and avid anglers alike. Head on a route past Masjid Petempatan Melayu Sembawang, a kampung-style mosque once at the centre of an old Malay settlement, before zipping by a hidden stretch of coast at Eagles Point.

There’ll be plenty to see and do at Sembawang Park, including letting the kids roam a battleship-themed playground, and stopping by the stately Beaulieu House for a cuppa. Head on southward to dip your toes in the extra-shiok waters of Sembawang Hot Spring to end the day. 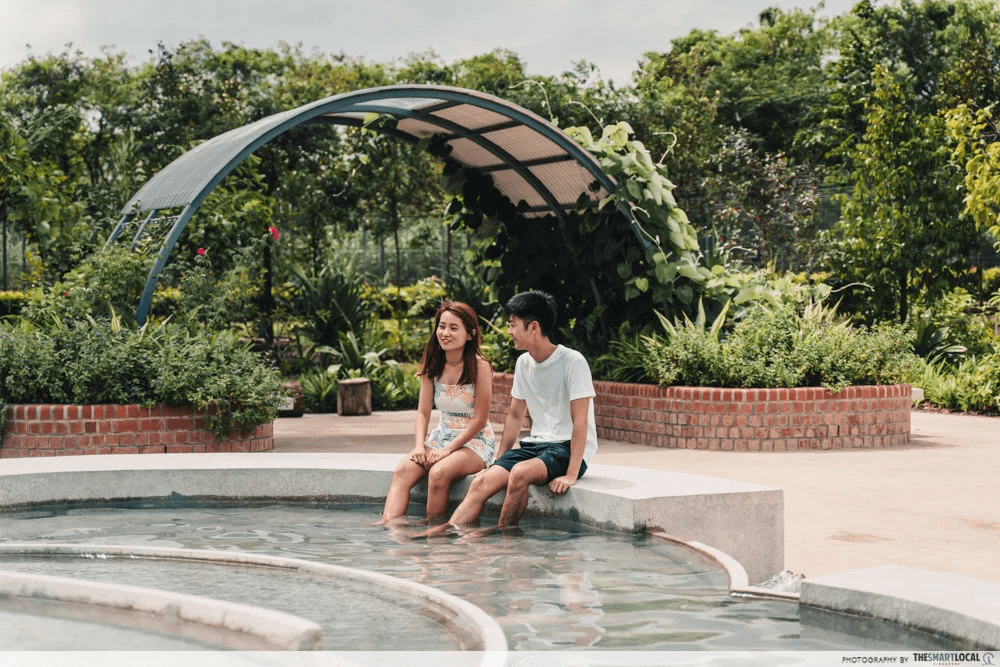 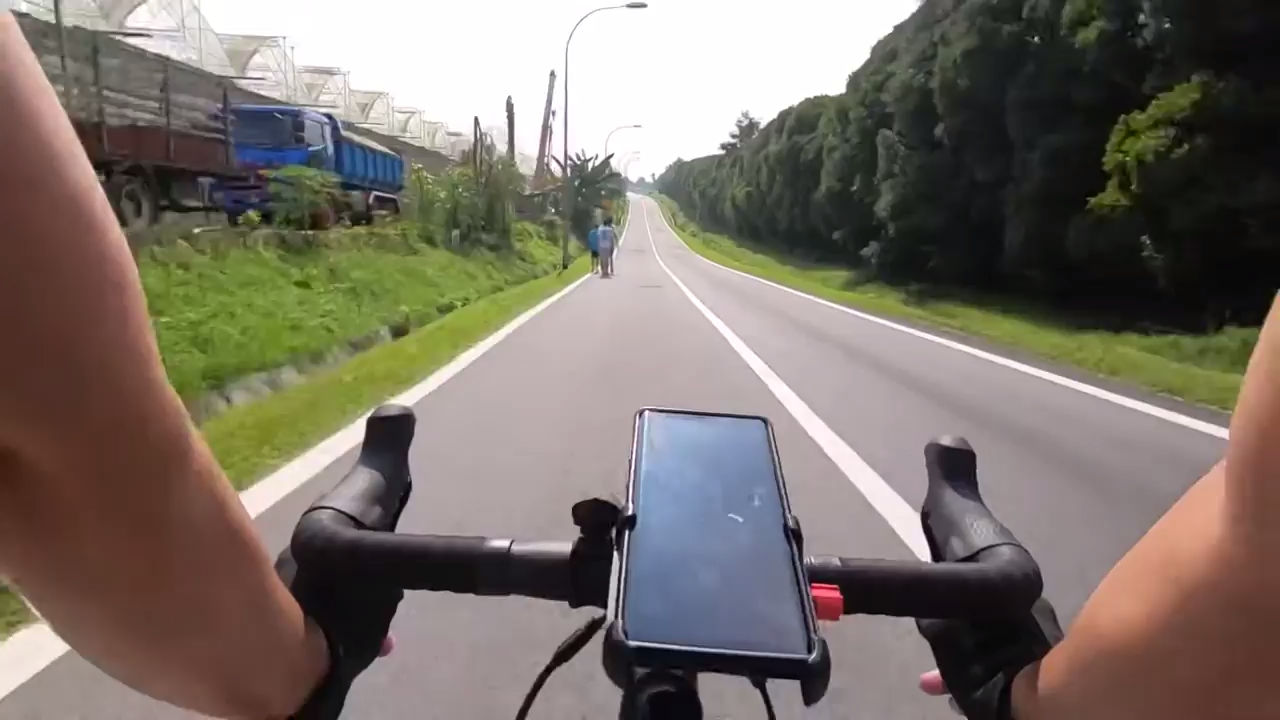 Kranji might be one of Singapore’s last vestiges of the countryside, and its long, winding stretches of quiet road is best explored on two wheels. While you can hop on a shuttle bus to take you to seven attractions in the area for a countryside getaway, you can fully indulge in that laid-back lifestyle by following the Kranji Heritage Trail.

This route features a total of 14 pit stops – which you can pick for your own DIY adventure to cover farms like Jurong Frog Farm and Bollywood Veggies. Those keen on exploring Singapore’s past will be thrilled by the abandoned HDB flats at Neo Tiew, the Kranji military barracks, and the WWII First Landing Site at Sarimbun. 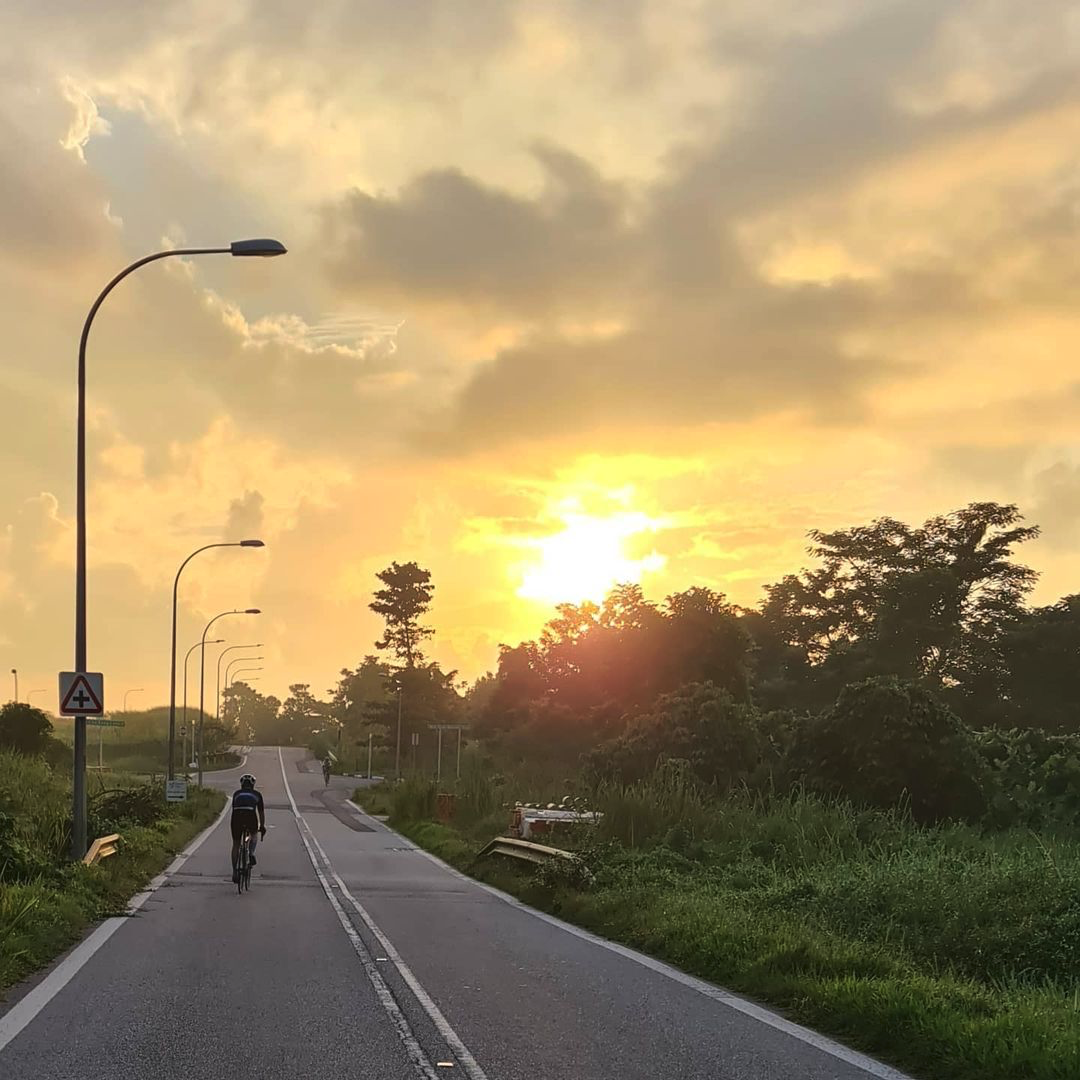 Surrounded on both sides by thick jungle, Rifle Range Road is an unassuming road that starts near the bustling King Albert Park and proceeds through a gruelling 3.5KM stretch of rolling hills. You’ll have to turn back at the end of it as the rollercoaster route ends in a dead-end – but you can continue on foot toward MacRitchie Reservoir or TreeTop Walk.

Though it’s a relatively short route, it’s not for the faint of heart as you’ll rack up over 160M of elevation throughout the 7KM return trip. You’ll also want to be on high alert for heavy vehicles and speeding cars as the slopes and bends can drastically reduce visibility. 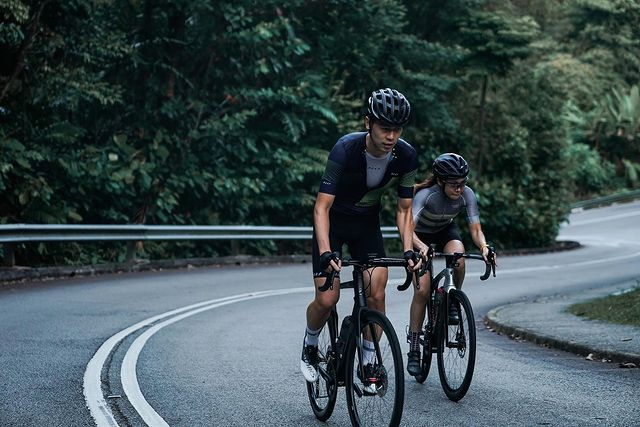 The straining muscles and burning lungs when climbing means many riders avoid slopes on their routes, but hardcore cycling enthusiasts simply can’t get enough of an uphill challenge – literally. Probably the toughest hilly course in Singapore is the Southern Bumps, a 35KM trail that starts near NUS at South Buona Vista Road a.k.a. “99 Bends”.

The route passes through the three main peaks of the Southern Ridges – scaling Kent Ridge Park, HortPark and Telok Blangah before ending atop Mount Faber. With slopes reaching up to a whopping 17% incline at Vigilante Drive, you’ll want to ensure you’re fit enough to power through the climbs – but your effort will be rewarded with the awe-inspiring views at the peak. Many parts of the Southern Bumps pass through public roads, so you’ll want to set off before dawn to dodge the traffic.
Image credit: @tiffpuspita 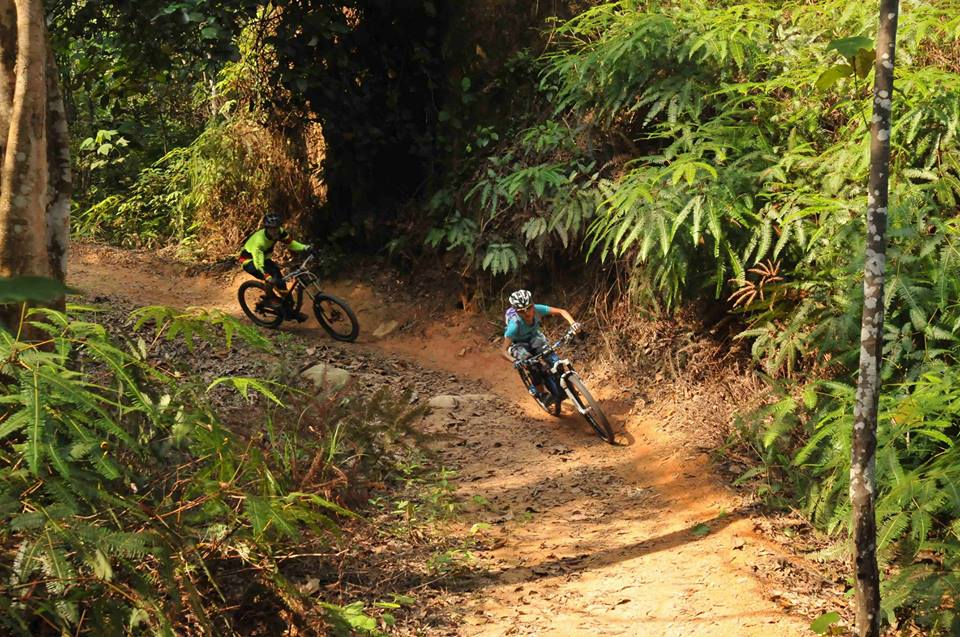 If tough slopes and rolling hills aren’t enough to satisfy your appetite for challenge, head down to Chestnut Nature Park for a thrilling off-road ride. Larger than 110 soccer fields, it’s Singapore’s largest nature park, and boasts a dedicated mountain biking route with trails sorted into four levels of difficulty.

From gentler sandy paths to rocky, uphill rides, you’ll have your pick of trails to challenge your bike handling skills – which you can hone at the nearby Chestnut Pump Track and Chestnut Bike Park. There, obstacles will train up basic mountain biking skills like pumping and balancing, along with more advanced ones like negotiating drop-offs and performing jumps. 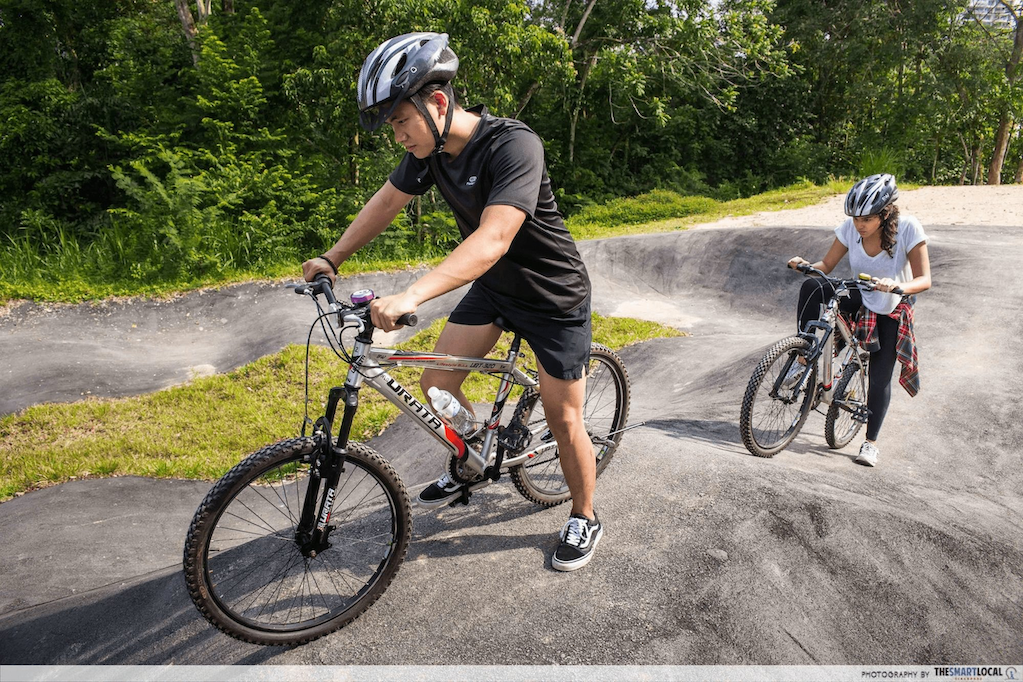 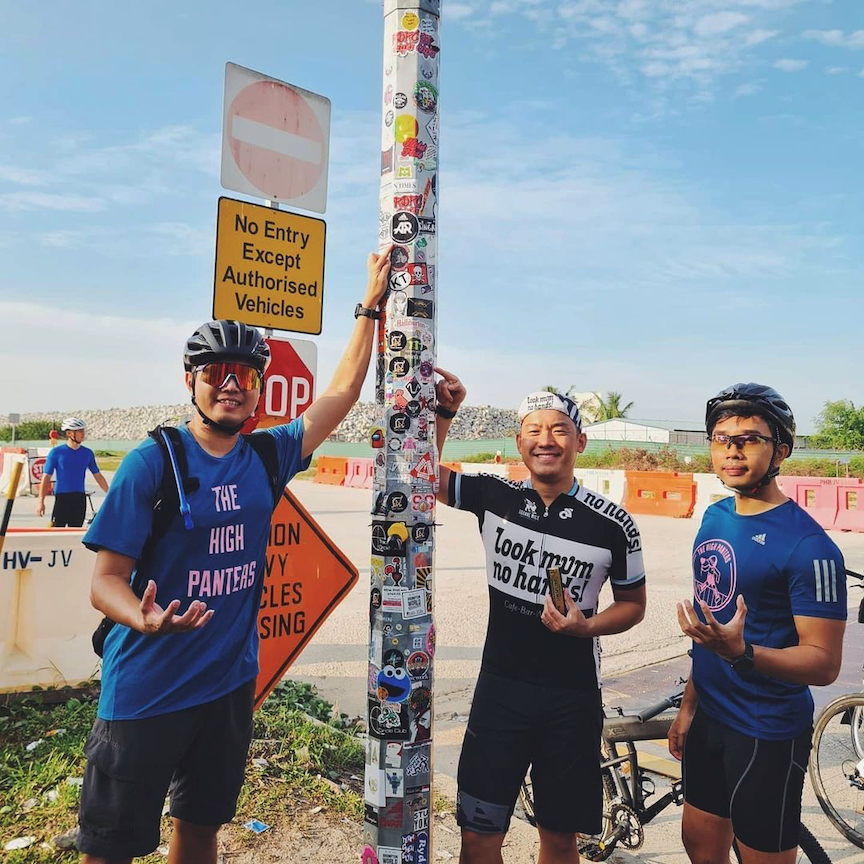 A must-do for cycling enthusiasts in Singapore, the trip to Tuas Lamp Post 1 is something of a pilgrimage. Located 10KM from the nearest MRT station at Tuas West Road, Tuas Lamppost 1 might be the most ulu lamp post in Singapore – and is the only one in Singapore where you’re allowed to stick stickers on.

In addition to taking along your choice of sticker to commemorate your own voyage on the lamp post, seasoned cyclists are known to pack food and repair supplies as it’s a long way from the nearest bike shop or mall. With many heavy vehicles plying the roads in Tuas, it’s also best to head over during daytime and during Sundays.

In the vicinity of LP1, you can also catch the sunset at Raffles Marina Lighthouse where they’ve set up a designated pit stop for cyclists venturing to this landmark. There, riders can make a stop for a toilet break, or recharge with a drink or a meal at Marina Bistro.

Level up your cycling routes with these biking trails

Nothing quite beats the freedom of exploring on two wheels, and these seven lesser-known cycling routes in Singapore will unlock new adventures with friends and family. Whether you’re an enthusiast or a leisure rider, planning ahead and familiarising yourself with the route can keep you safe.

If you prefer exploring Singapore’s back streets and historical landmarks with a tour, check out this Singapore Bike Tour deal.

For more articles on nature adventures in Singapore: 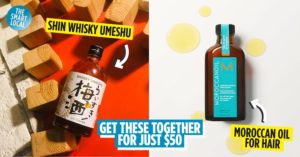 KrisShop Has Mix & Match Discounts On Brands Like Calvin Klein, Sulwhasoo & TokiDoki, Plus Up To 60% Off
New World Carnival Opens VR Arcade In Town With Unique Games Like Zombie Shoot-outs &... 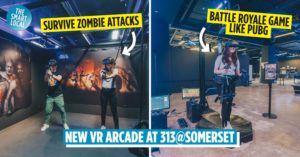