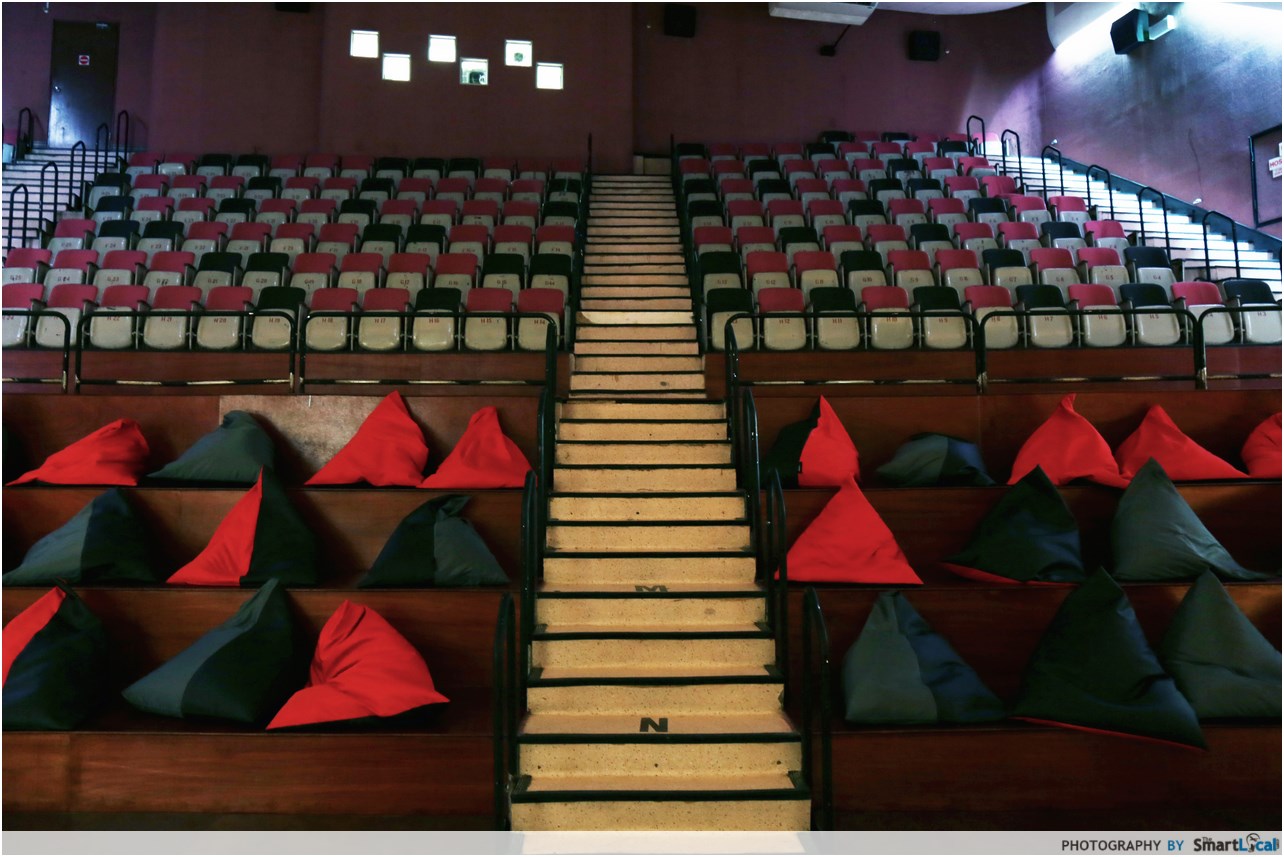 Maybe you’re a film buff wondering why the films they show at film festivals never appear in cinemas here. Or maybe you’re an old soul, longing for the days of silent movies and Audrey Hepburn. Or maybe you just want to watch a good movie.

Tucked away in Golden Mile Tower, The Projector is a hidden gem. Given a new lease of life, two of Golden Theatres’ cinemas are now fully refurbished and a hipster-certified hangout. Even if you’re just a regular moviegoer, it’s an experience beyond traditional multiplexes.

Some history behind the cinema: The Golden Mile Theatres used to show the latest flicks in its heyday, but it lost out to newer cinemas over time, playing host to adult films and Bollywood hits in the 90s.

It’s not easy getting to The Projector and most people I know are hesitant to try something unusual, but fear not! I was happy being the sacrificial lamb and I found the experience pretty darn special. 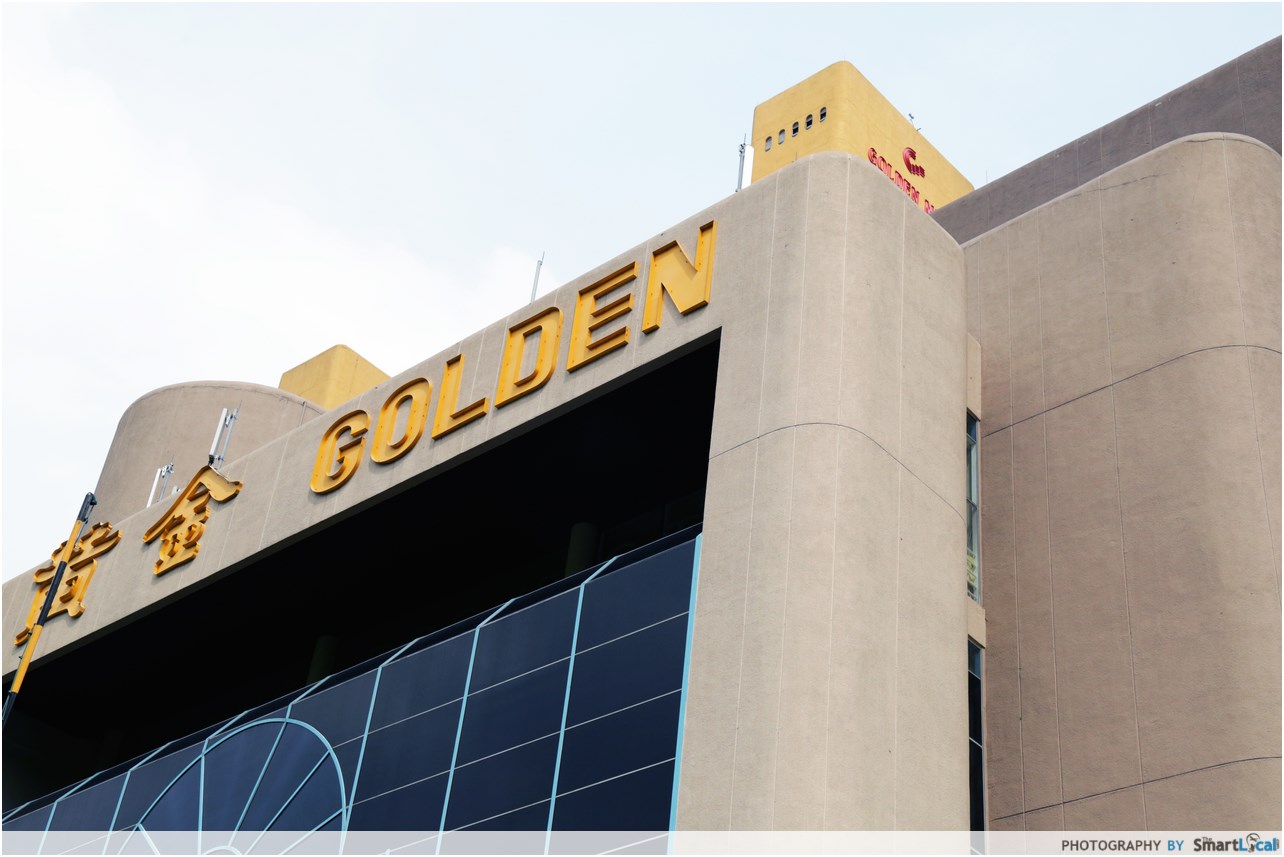 Don’t confuse Golden Mile Tower with Golden Mile Complex! The former is where you want to be for movies, the latter is for Thai food. 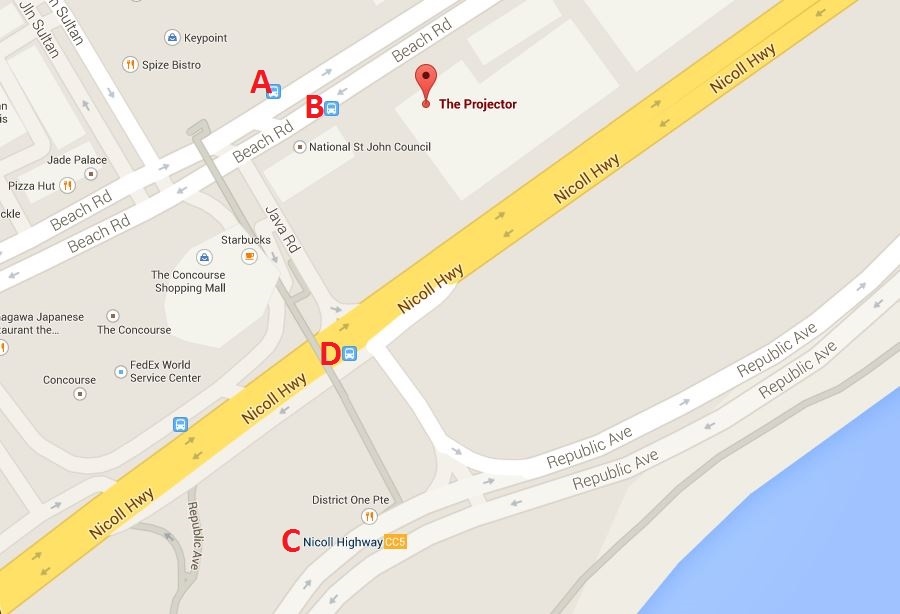 From Bus Stops A & B 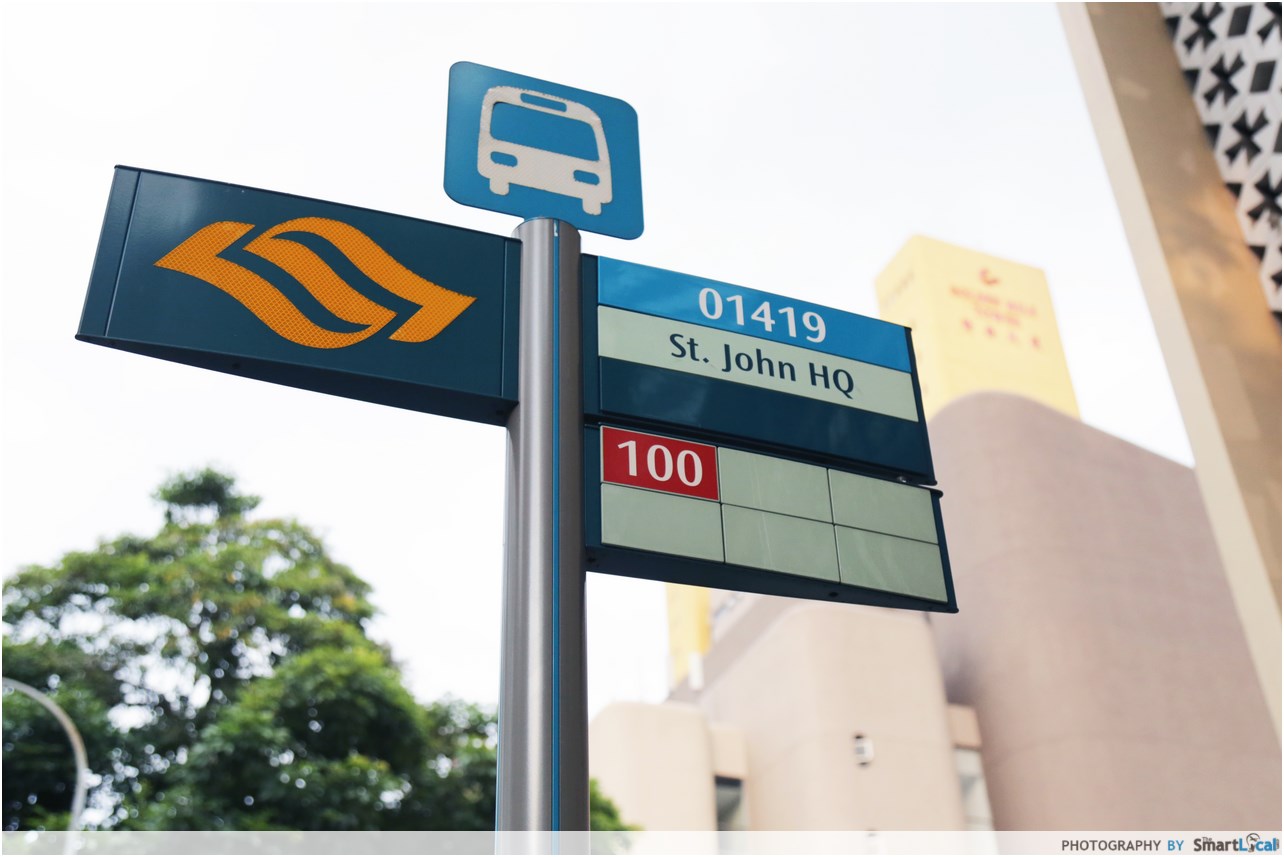 Golden Mile Tower is near Nicoll Highway MRT, right next to the St. John HQ bus stop and across the road from Keypoint Bldg. 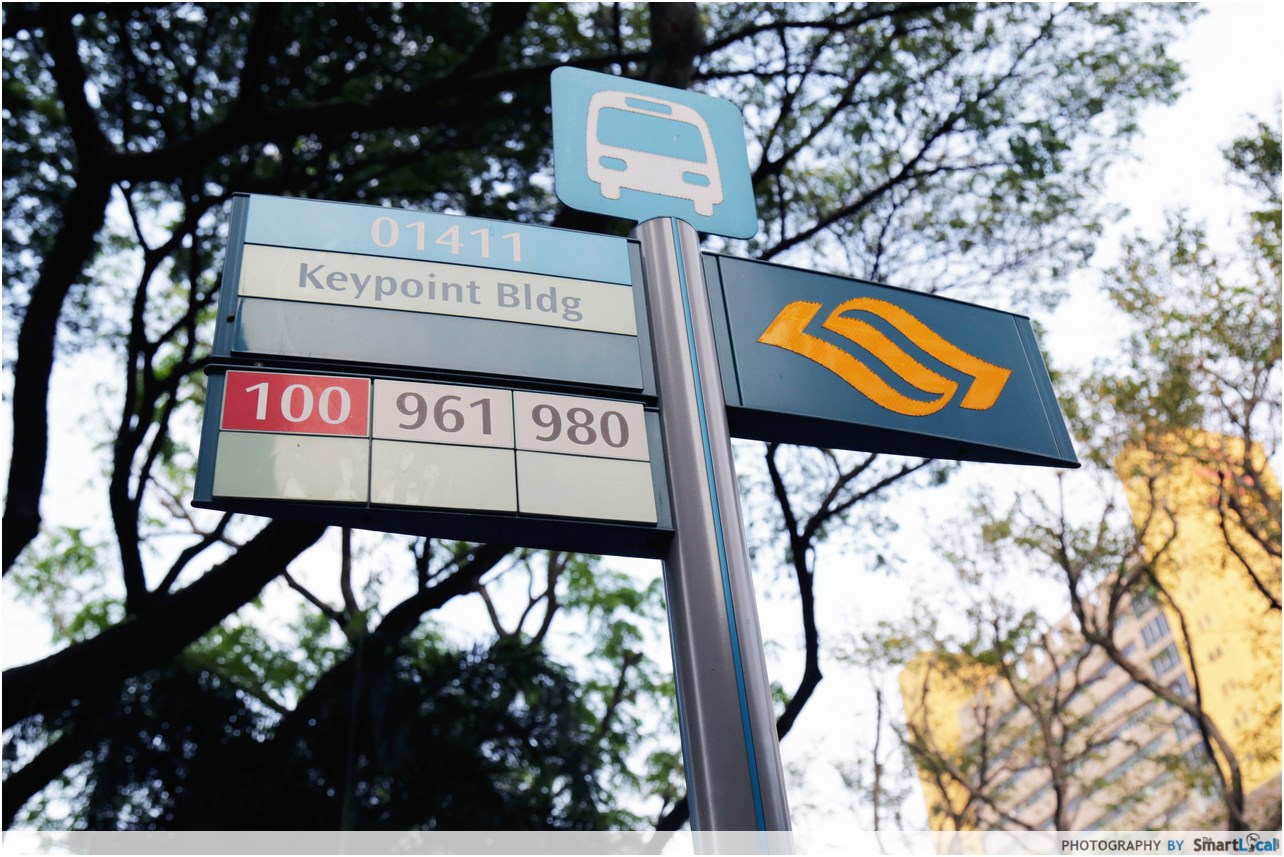 Note that not all buses that go to Keypoint Bldg stop at St. John HQ! 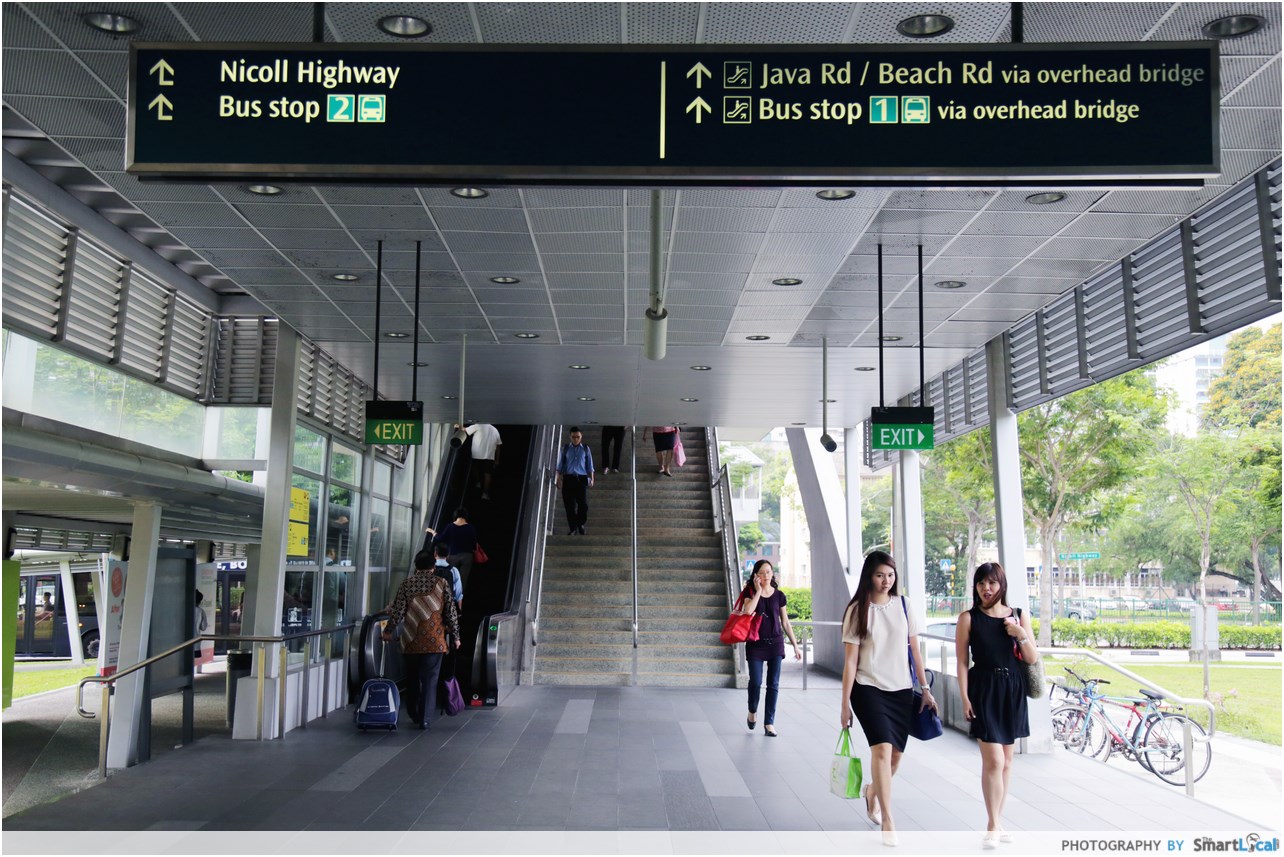 From the MRT station, take exit A. From the bus stop, walk towards the MRT. You should see this in front of you. 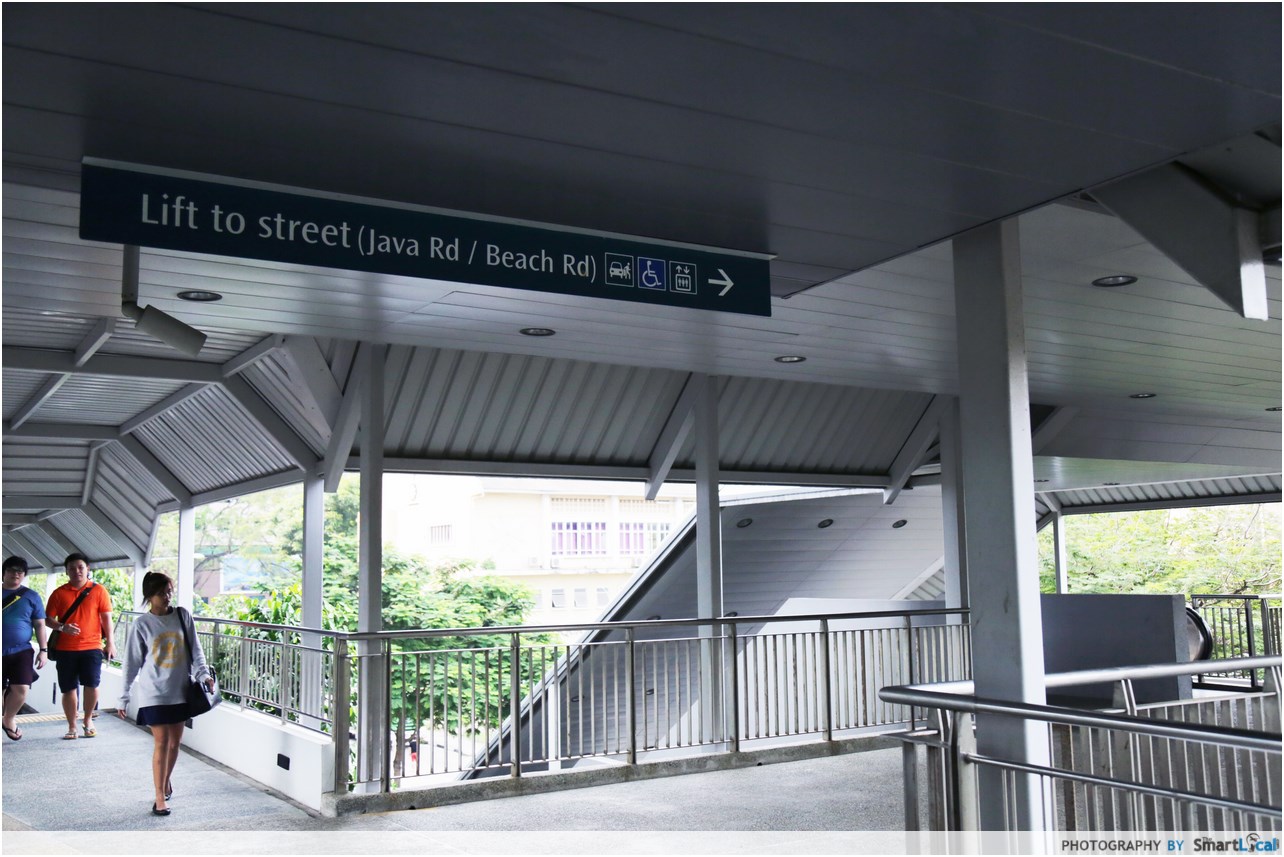 Take the overpass and exit at Java Rd/Beach Rd. 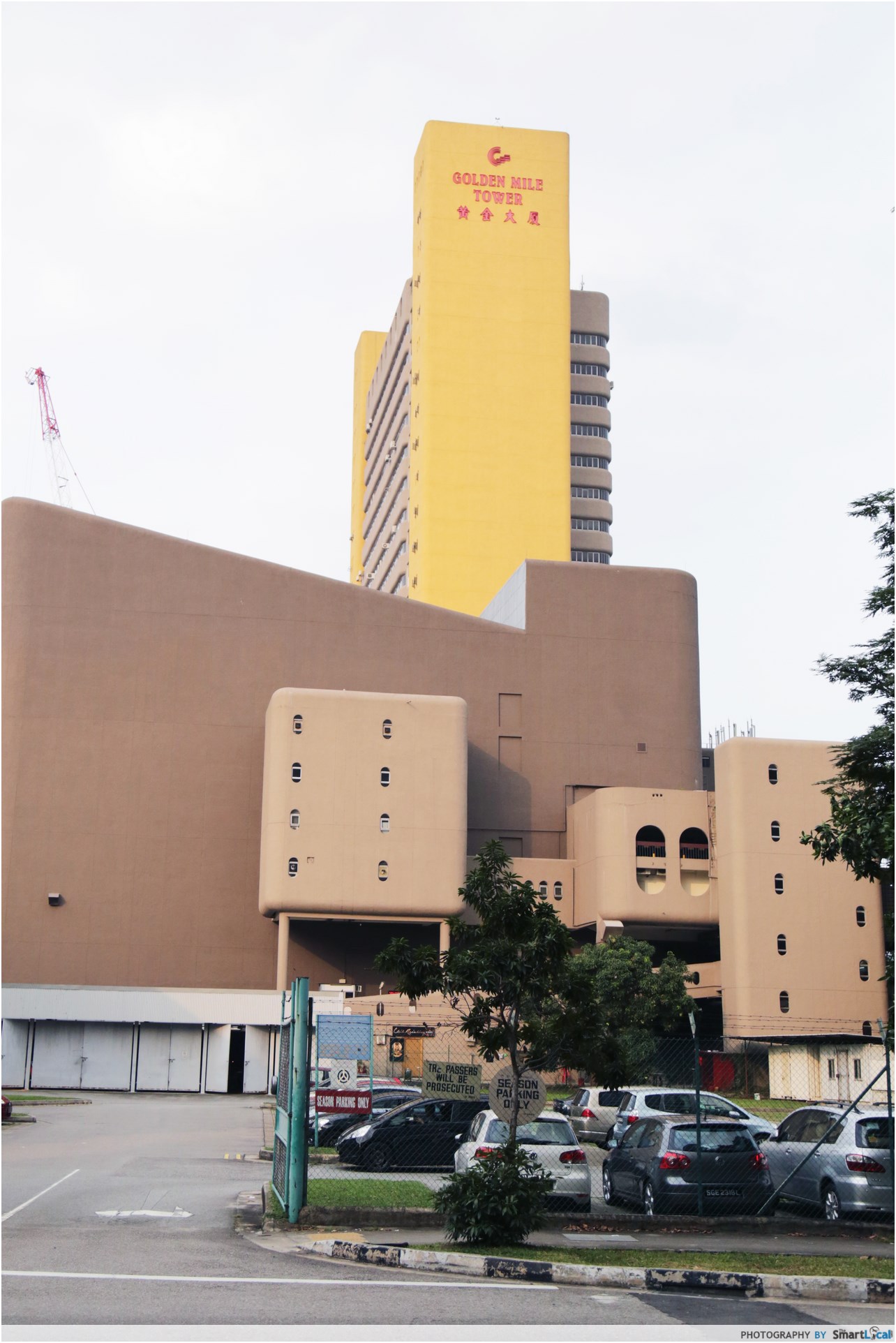 Golden Mile Tower is on your right. Turn right at the junction – it’s a short walk from there. 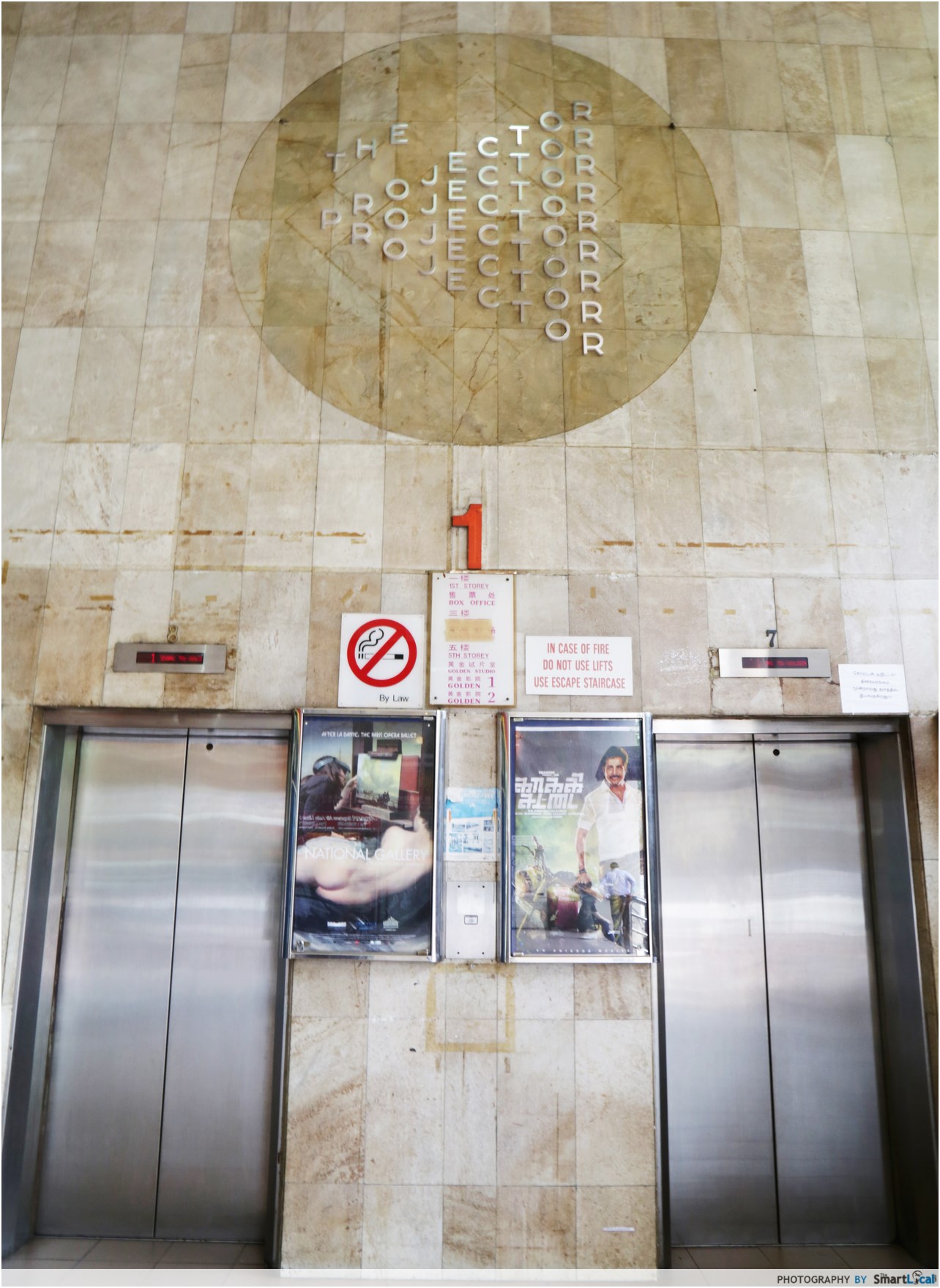 Enter the main lobby of Golden Mile Tower. If you look to your right, there’s a lift lobby. The Projector is on level 5. 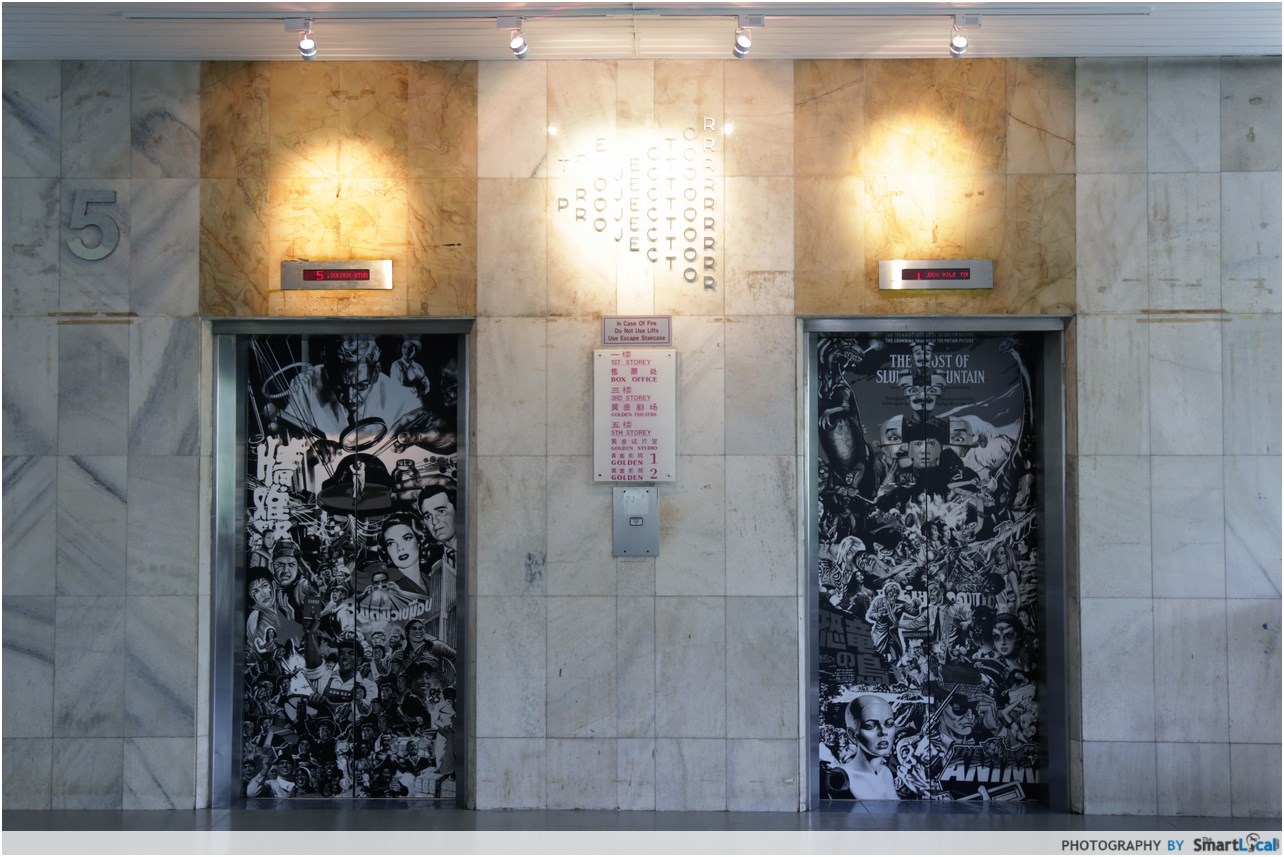 And don’t worry, if one of your friends gets lost, you can ask one of the staff for help. They’ve retrieved someone from a nearby petrol kiosk once, so you’re not alone!

Welcome to The Projector 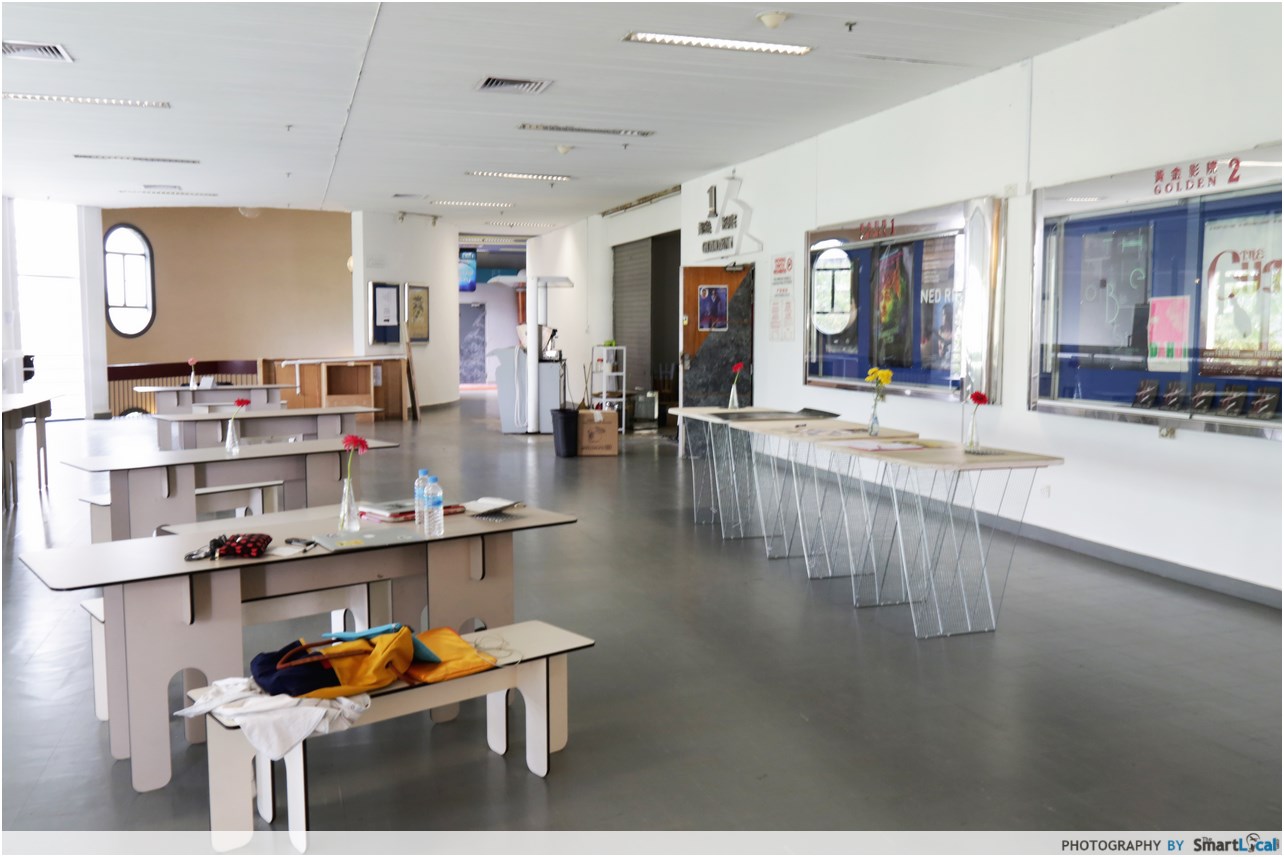 The cinema foyer is far from the plush carpets of traditional cinemas. It’s got a clean, minimalist look, with distinctly DIY-ed furniture. 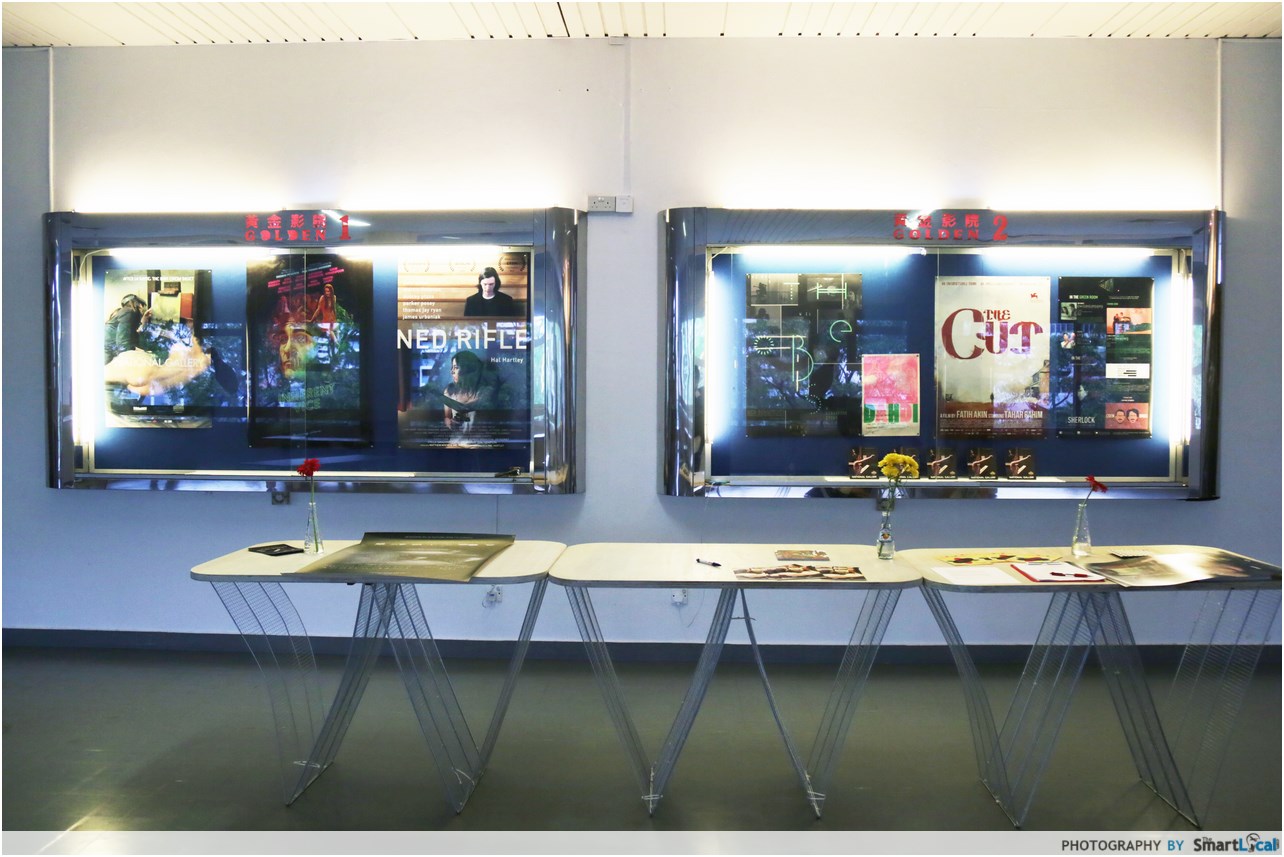 Retrofitting the old cinema creates a curious mishmash of old and new – the notice boards on the wall are old, but the table was custom made by one of the tech crew. The result is an informal, casual space. 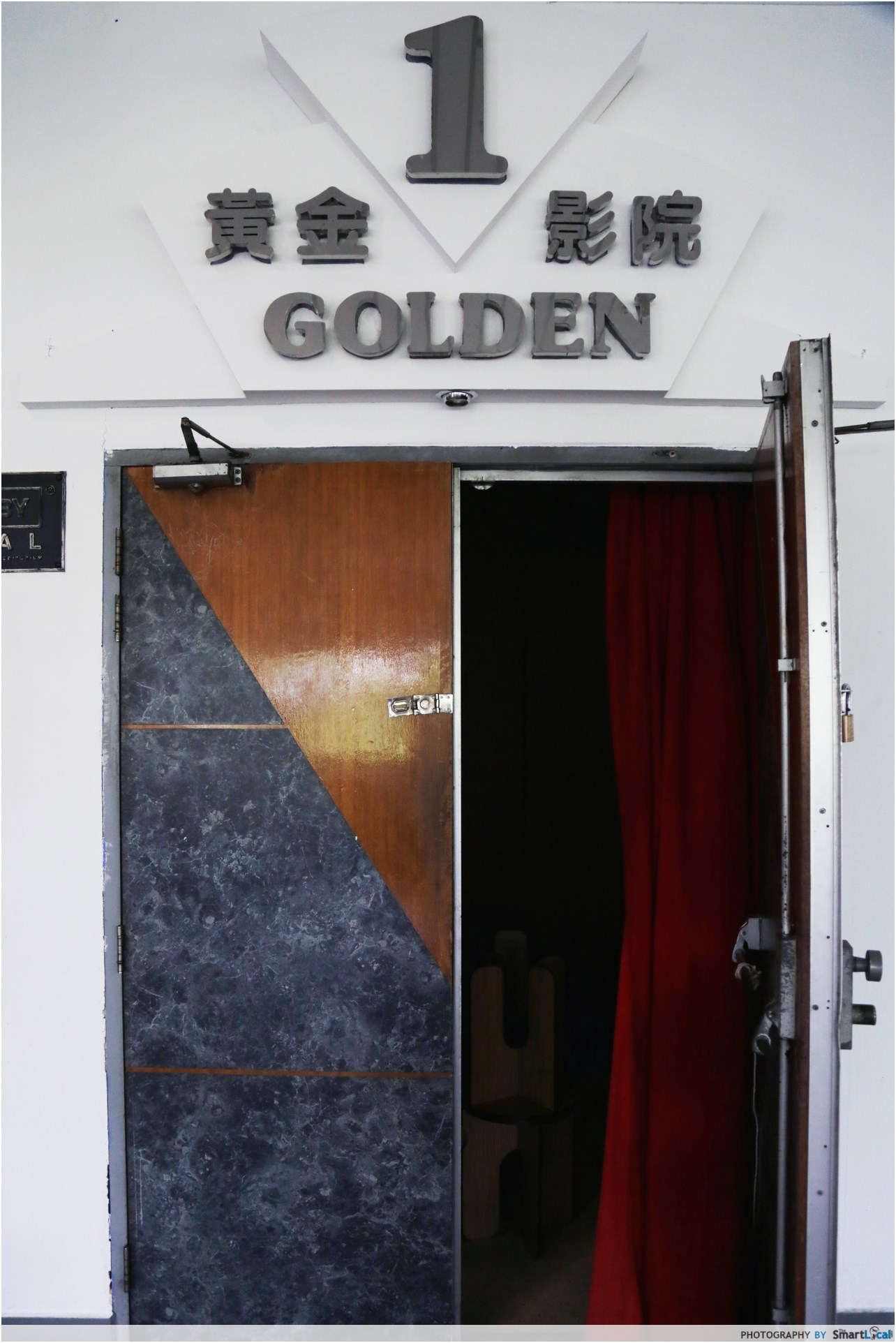 So vintage – they’ve kept the original theatre doors too. 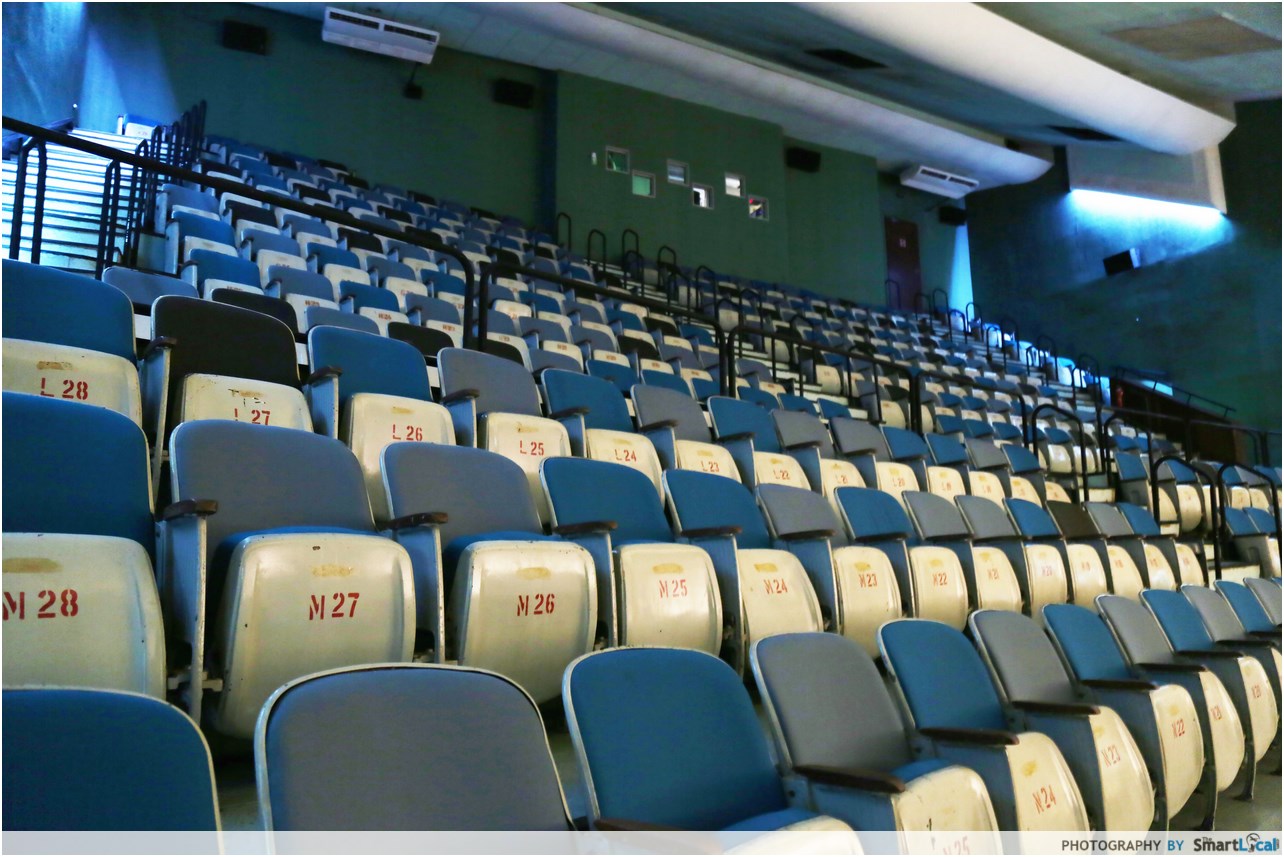 This is the Green Room, the larger of the two theatres. The seats are still same flip-up chairs with wooden armrests, but there’s a new projection system and they’ve re-upholstered the chairs.

The Cut movie trailer, coming soon to The Projector

I had the impression that The Projector only showed indie movies, but it’s more like a place to showcase the classics – from Breakfast at Tiffany’s to foreign language films to the best of film festivals. They’re currently featuring the Coen Brothers, of The Big Lebowski and Fargo fame.

And you heard it here first: the curator is currently selecting the best horror films for a showcase AND there will be a Wes Anderson special in the future!

Welcome to the Redrum (Red Room), scene of blood and gore. Just kidding, the theatre is cosy and crazy photogenic. When I stepped in, my attention was drawn to the bean bags because so few cinemas are this comfortable! I mentally chose a bean bag in a prime location for the movie later (it’s free seating!). 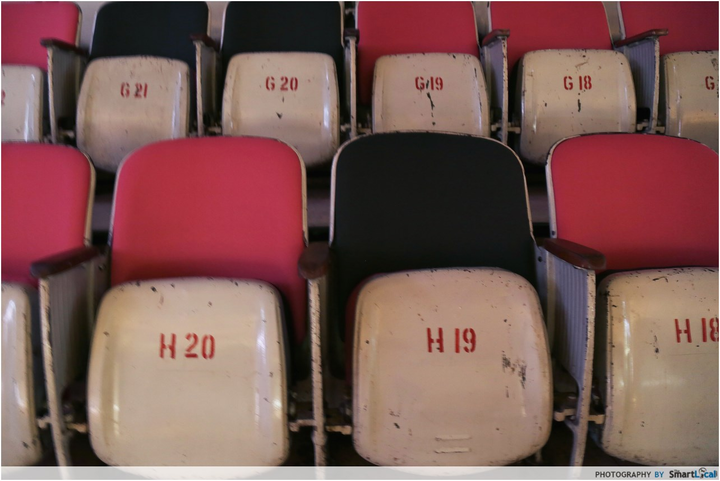 Aside from the bean bags, the Redrum is similar to the Green Room, except that the chairs are upholstered with pink and brown fabric. There’s also a stage in front of the screen, where the live magic happens. It’s a multifunctional space – think musical performances, tango sessions and more recently, The U Symposium, a gathering of Singapore’s leading indie magazines. 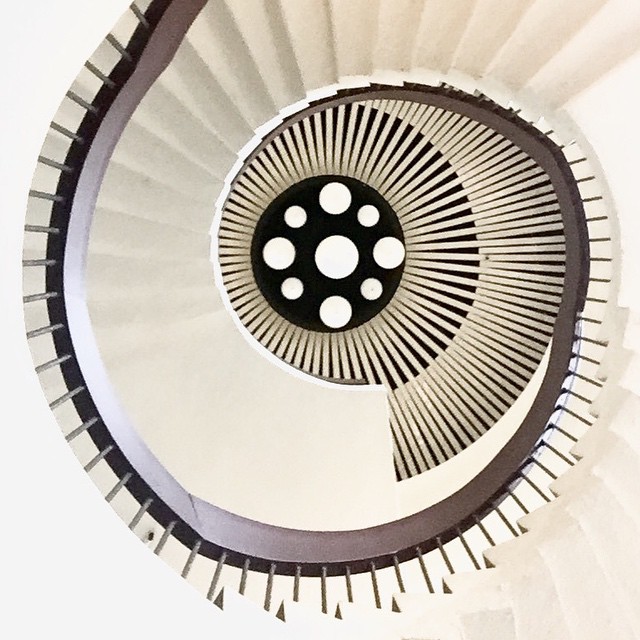 No visit is complete without a requisite picture of their iconic spiral staircase. Pictures of it have popped up everywhere on Instagram. You can’t miss it – it’s on the opposite end of the lobby from the lifts.The white circles are newly installed lights hanging from the ceiling, making for an interesting shot… if you don’t mind dangling your phone or camera over the railing. 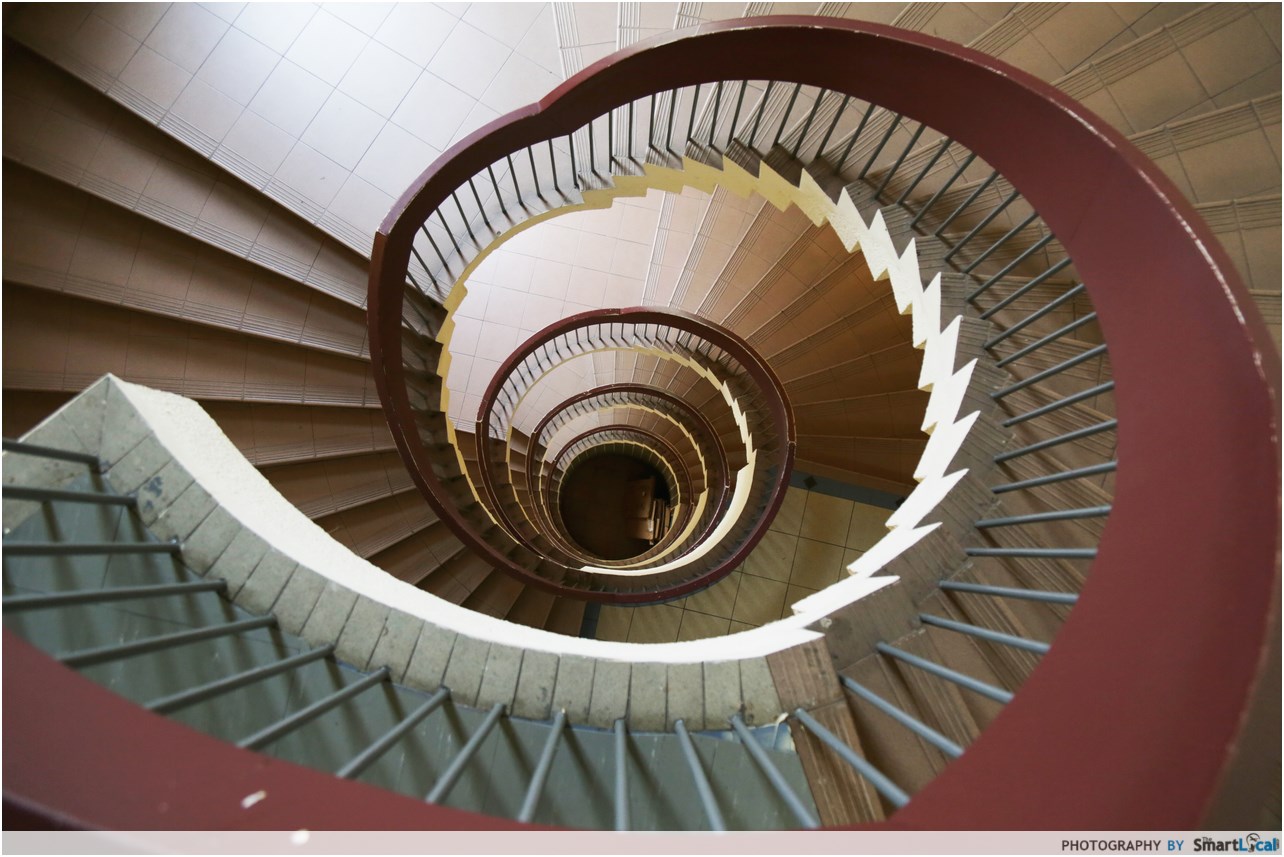 Taking a photo down the staircase isn’t a bad idea either. 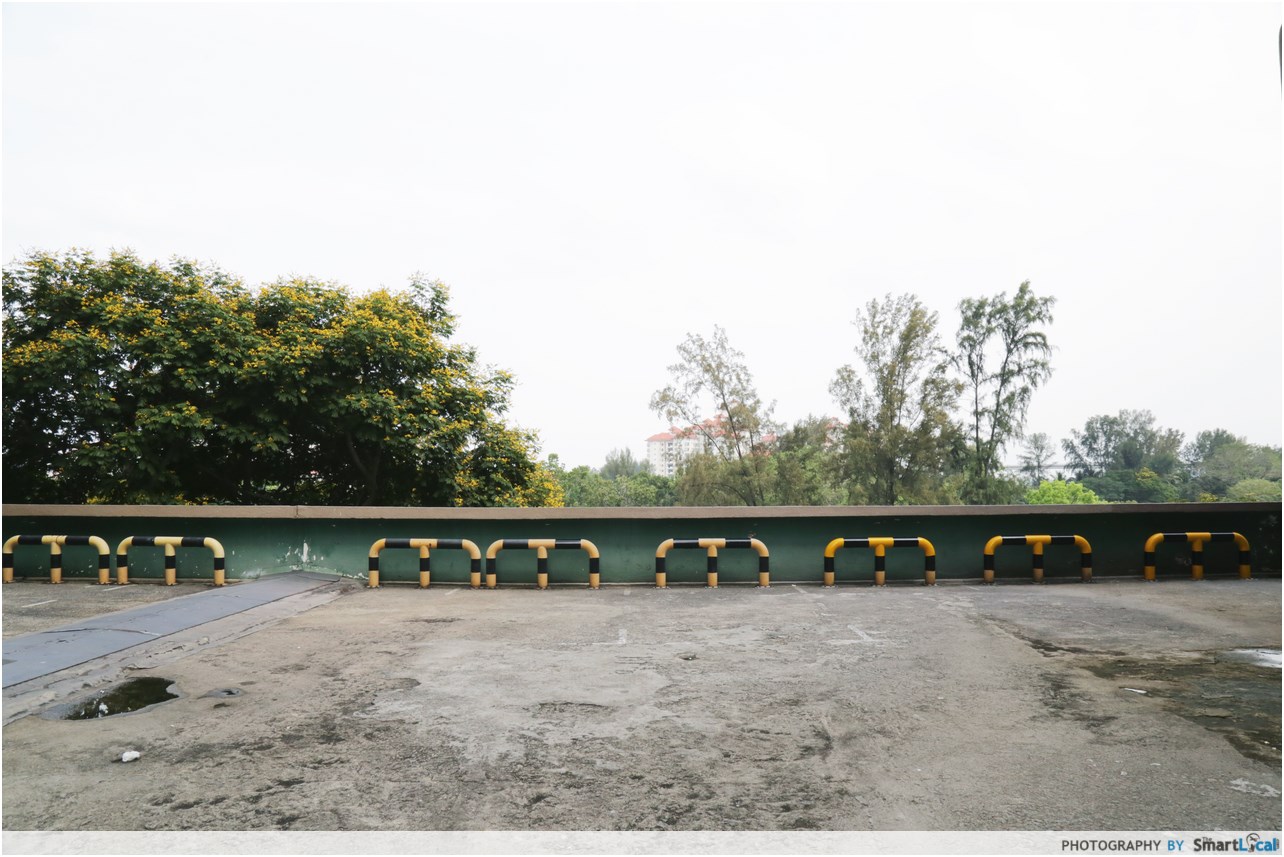 This old-school open air carpark doubles up as a smoking area and a place for hipsters to pose for an #ootd. So retro. 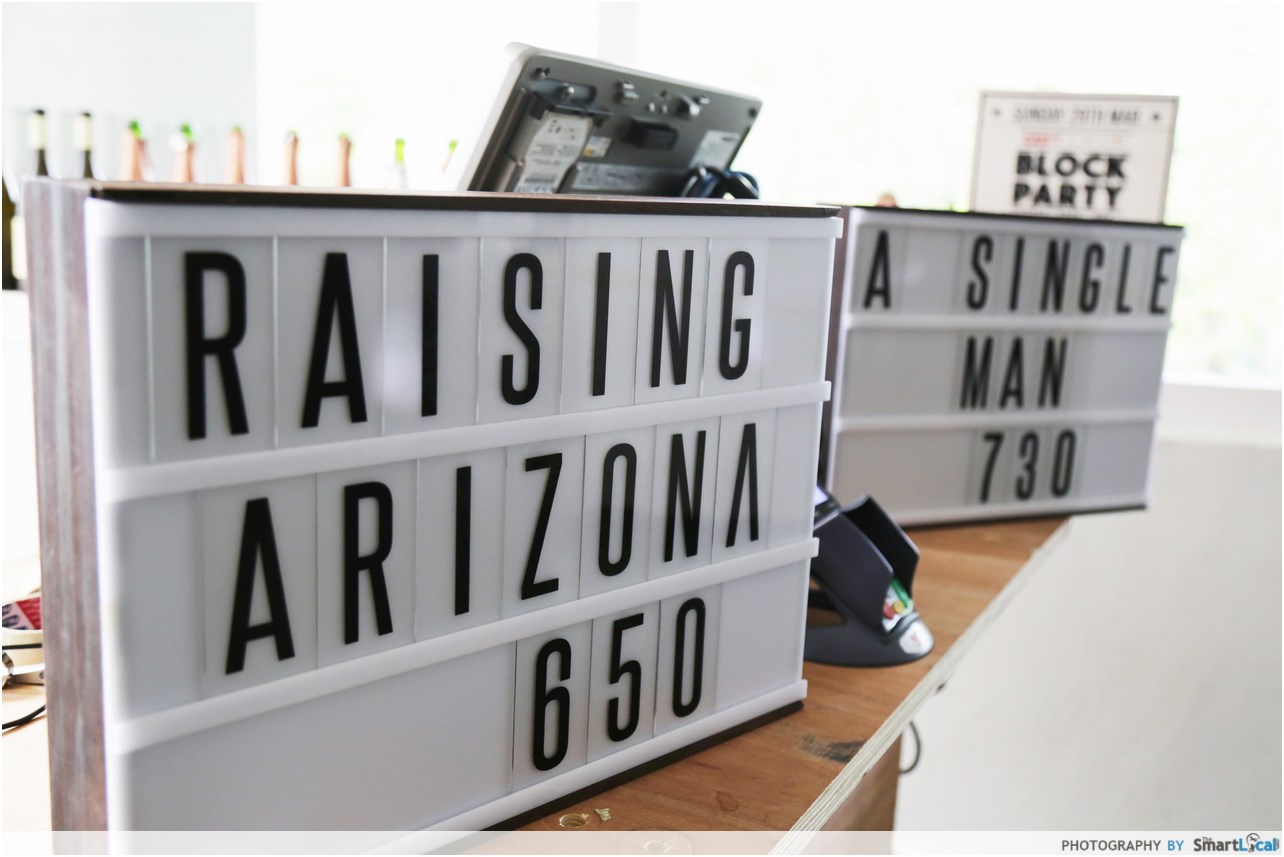 After wandering around the cinema, I watched the 6.50pm screening of Raising Arizona in the Redrum. It was a Tuesday night and there were only seven of us in the theatre. 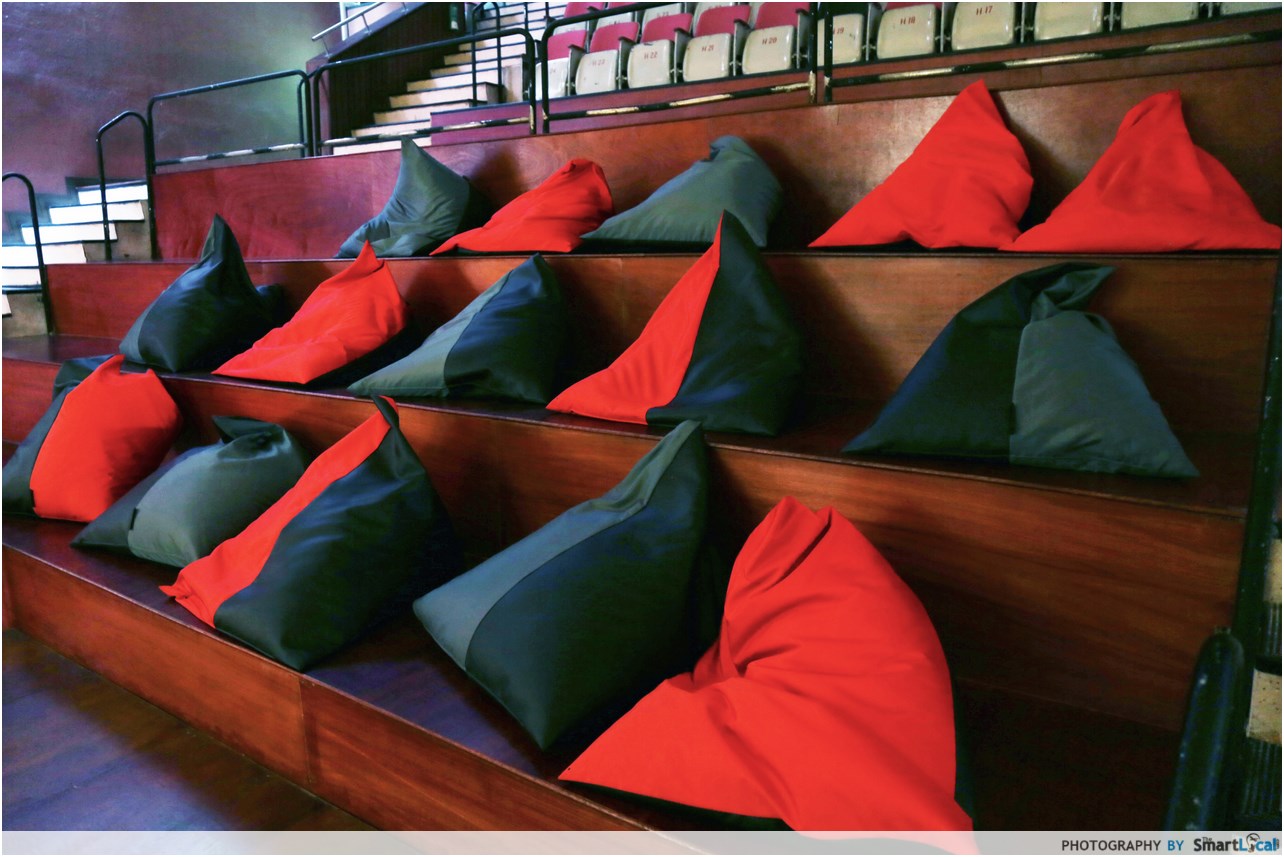 I usually dislike watching movies alone, but this time I was happy to sprawl all over two bean bags in the most unglamorous way. The trailers began rolling and I was sinking further and further into the bean bags, so comfortable that I thought I would fall asleep.

The movie was hilarious. The screen was huge. The sound system was great. Nobody blocked my view. And best of all, I didn’t fall asleep.

Go Forth and Catch a Movie! 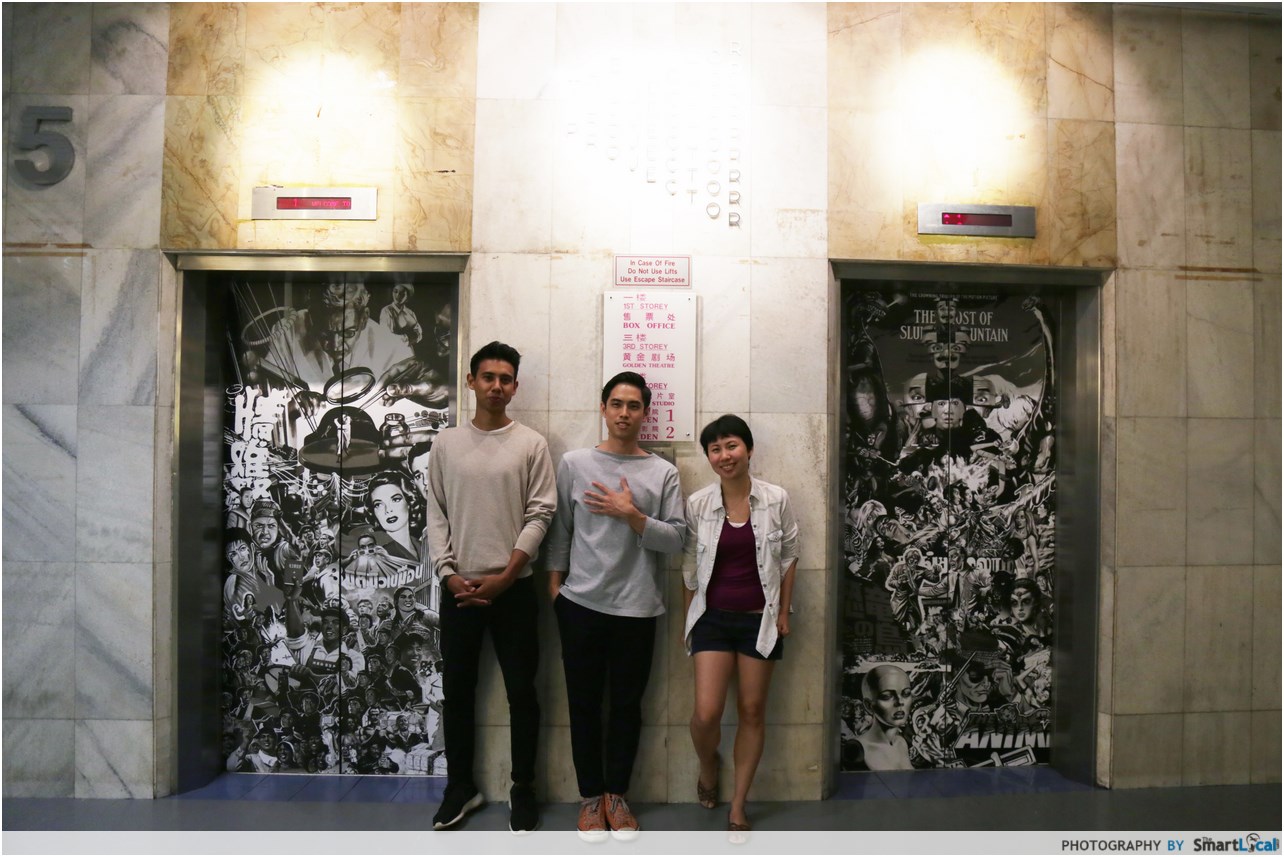 As Michelle from The Projector tells me, it’s not so much an arthouse cinema, but an alternative space where people can enjoy watching movies. Unlike commercial cinemas, The Projector is run by people who love film – you have the assurance that every movie is carefully curated and most importantly, a good movie.

It’s not just for hipsters! It’s everyone’s cup of tea: 13 bucks for a huge screen, a good movie and beanbags? YES PLEASE. 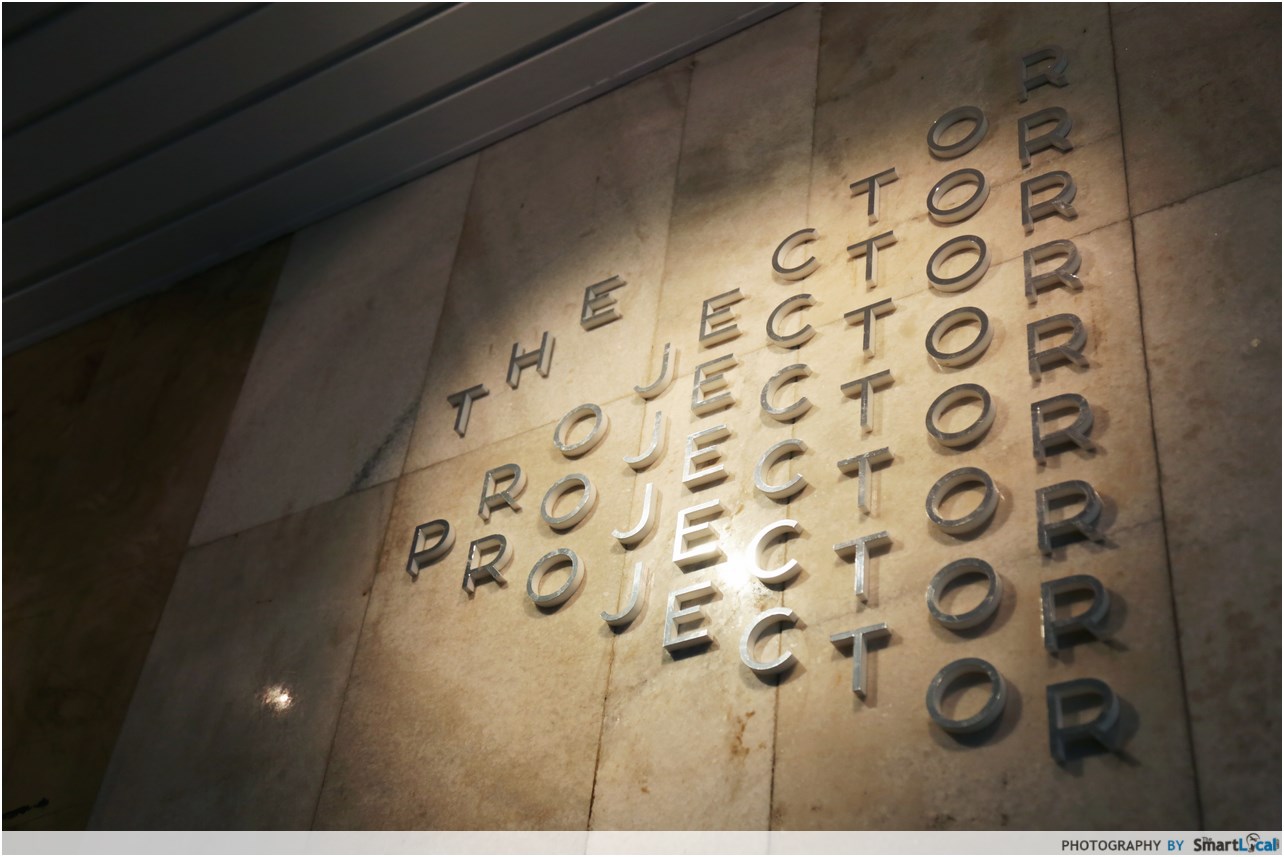 Check out more non mainstream places to visit in Singapore: