Congratulations! You’ve conquered 2020 – for many of us the most challenging and hectic year in our lifetimes. While we take a rain check on year-end travel plans to a beach in Bali, a cafe in Paris, or even to Times Square to watch the ball drop, the widespread New Year’s Eve fireworks displays in Singapore will offer hope and encouragement as we usher in 2021.

With displays across 11 towns in Singapore, this year’s fireworks are televised and are also arranged to maximise your chances of catching it from your window – the pyrotechnics burst up to 67 storeys high, above the tallest BTOs. It’s best to stay home, but avid photographers and those snapping away for the ‘gram can try these spots to catch the New Year’s Eve fireworks.

Disclaimer: The exact locations of the 2021 New Years Eve fireworks are not confirmed. The places in this article are selected based on previous sites like for the 2020 National Day fireworks. We’ve indicated the probability of sighting fireworks at each location, but there aren’t any guarantees.

TheSmartLocal does not encourage crowding during festive occasions and advises readers to be considerate especially in residential areas mentioned here.

Check out our other articles to round up 2020: 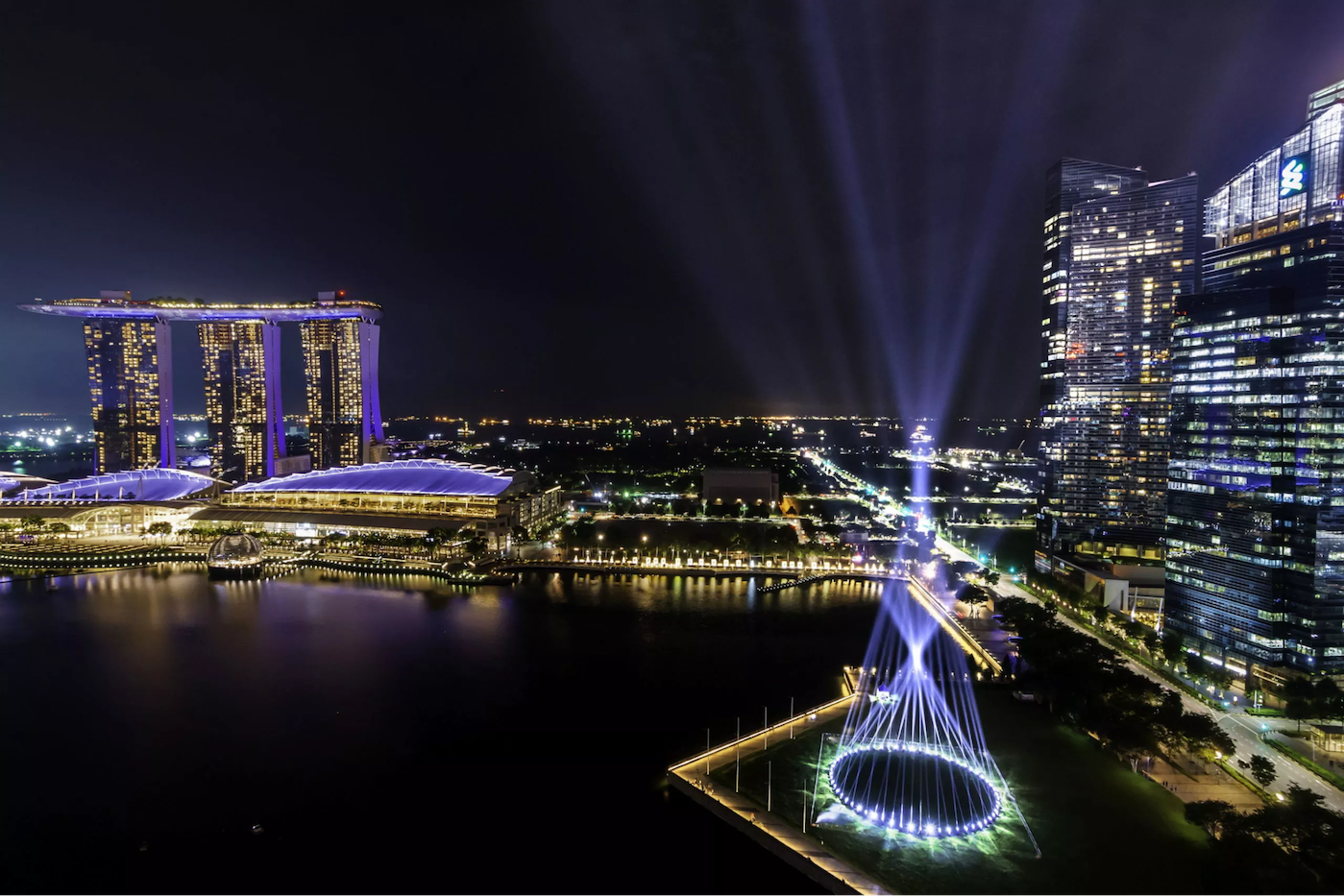 The fiery spectacle at Marina Bay on National Day, New Year’s Eve and even Chinese New Year never fails to draw throngs of gawking Singaporeans, so it’s for the best that it’s put on hold this year. But if you’re looking to embrace a more quiet, reflective New Year’s Day, head to the Promontory to catch Shine a Light, a 3-minute animated show featuring 60 light beams. 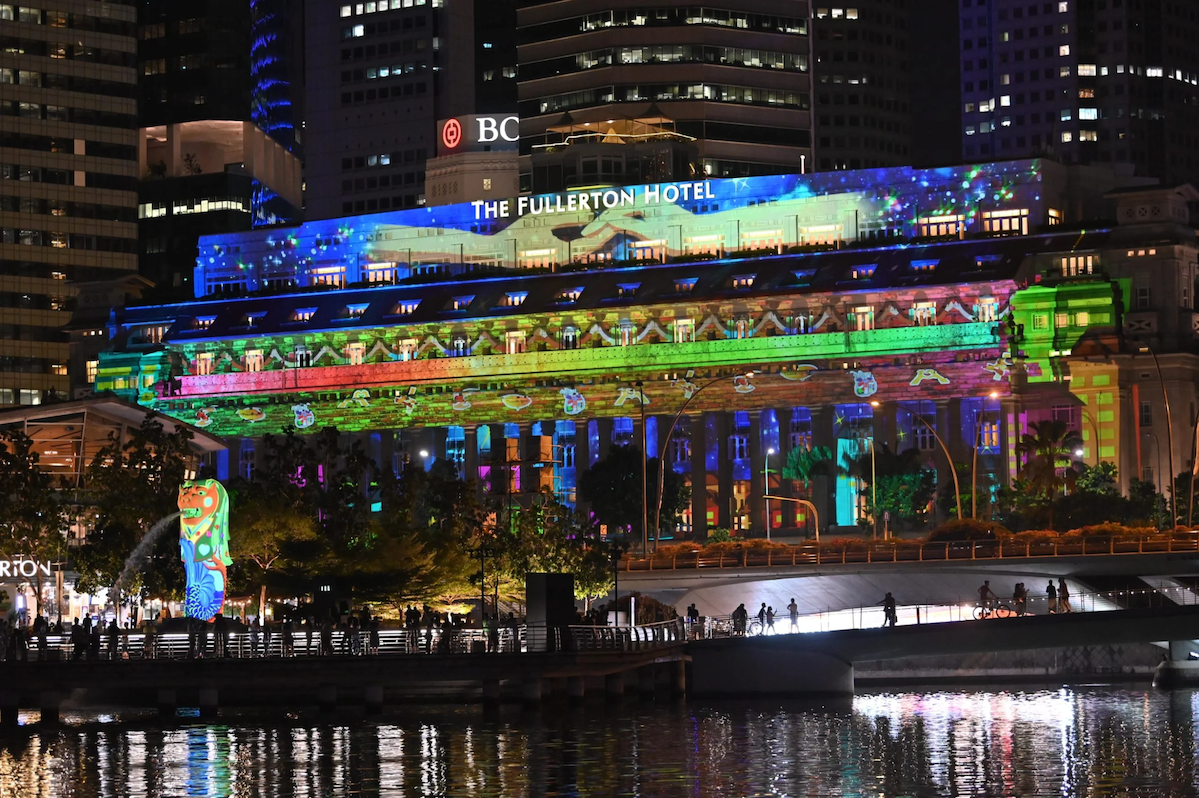 Plan stops around the bay at the Merlion, The Fullerton Hotel and ArtScience Museum to catch Share the Moment, which features 17 artworks by 24 local students projected on their iconic facades. Commemorating touching stories of hawkers distributing free meals and people who sewed handmade masks for the needy, it’ll make for a heartwarming end to 2020.

Shine a Light and Share the Moment light displays take place 8PM-10.30PM daily, but will be extended to 11.45PM on their last day, 31st December. 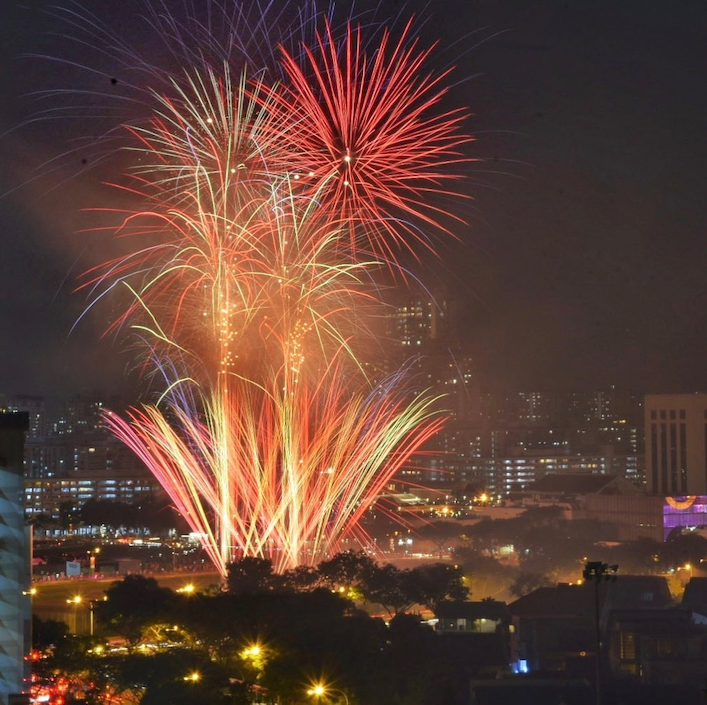 Bishan dwellers residing around Junction 8 were treated to a feverish extravaganza this August when fireworks were launched from the grass field by the mall. To get in on the action, head to Blk 207 Bishan Street 23, a 16-storey slab block with open corridors where you’ll be able to get a bird’s eye view of the show.

Alternatively, Blk 191 Bishan Street 13 offers a perspective from the opposite side. From your 8-storey perch, you’ll be able to frame up a shot with the stepped silhouette of the Sky Habitat condominium on the right. There are taller points in the area, like the 25-storey tall Blk 179 – but it’s a point block with recessed windows that will limit your view. 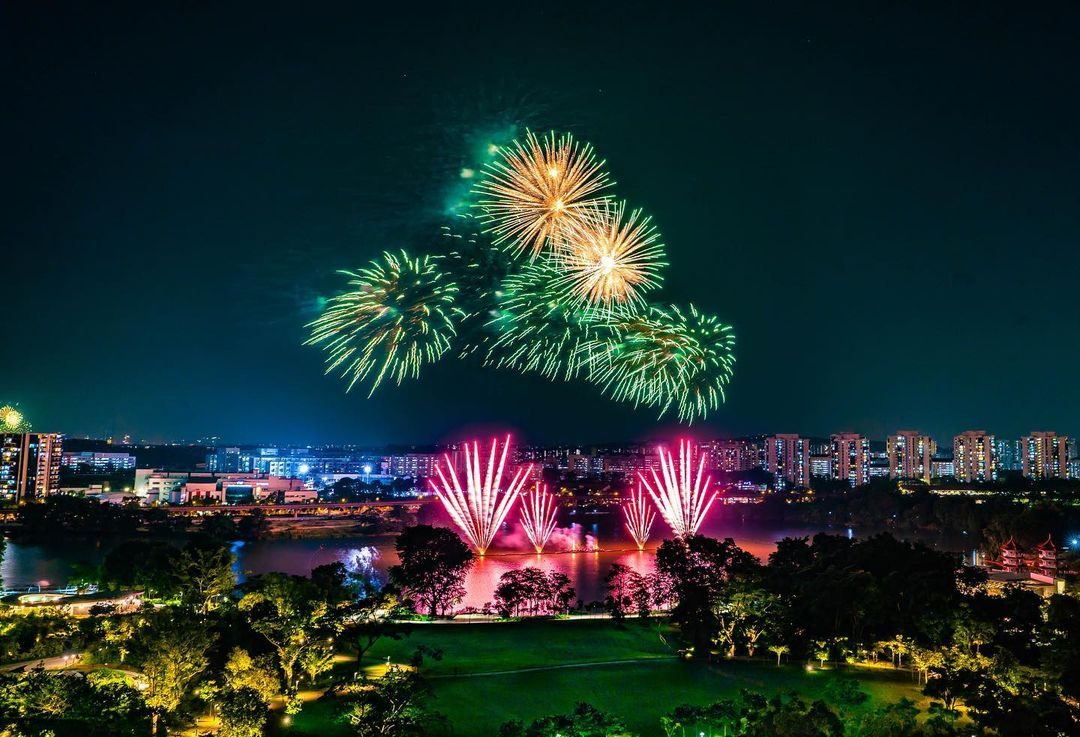 While Bishan had their display launched from the middle of town, residents of Jurong enjoyed their 2020 NDP fireworks over Jurong Lake Gardens. The idyllic surroundings and calm waters will make for a peaceful spot for a picnic dinner as you chope a front-row spot of field for later. Secure a spot near Clusia Cove for the best shots to make all your friends FOMO. 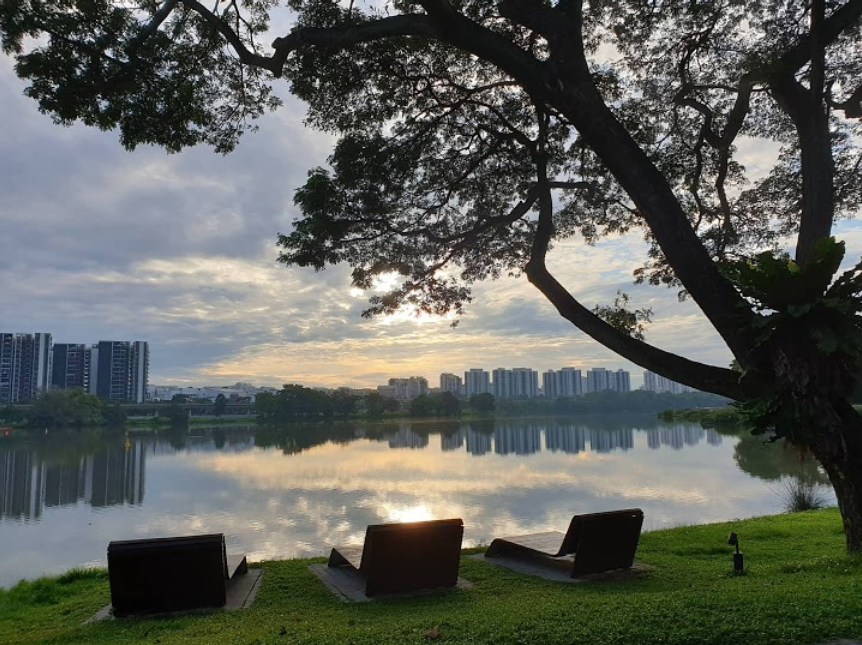 While you’re there, be sure to check out A Better Tomorrow, a lantern display organised as part of the President’s Challenge that features glowing displays crafted by 100 lantern makers. You’ll be transported around the world with Japan and Australia-themed displays, and get the lowdown on your horoscope predictions at the Lucky Zodiac zone.

Hang mini sky lanterns and water lanterns and make a wish for a better 2021, a great chance to give back as all proceeds will go to the President’s Challenge Charity Fund. 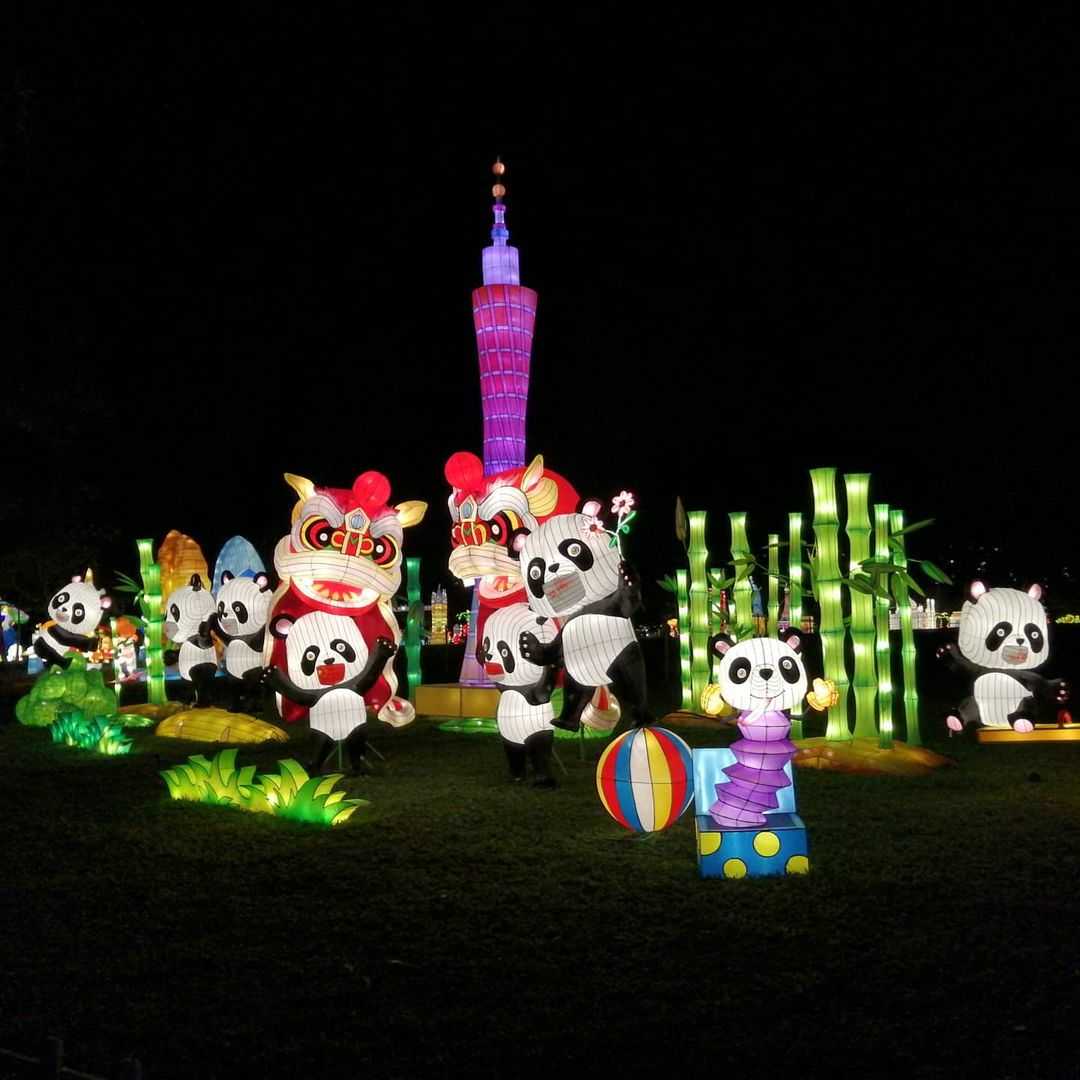 4. Tampines – from the south bank of Bedok Reservoir 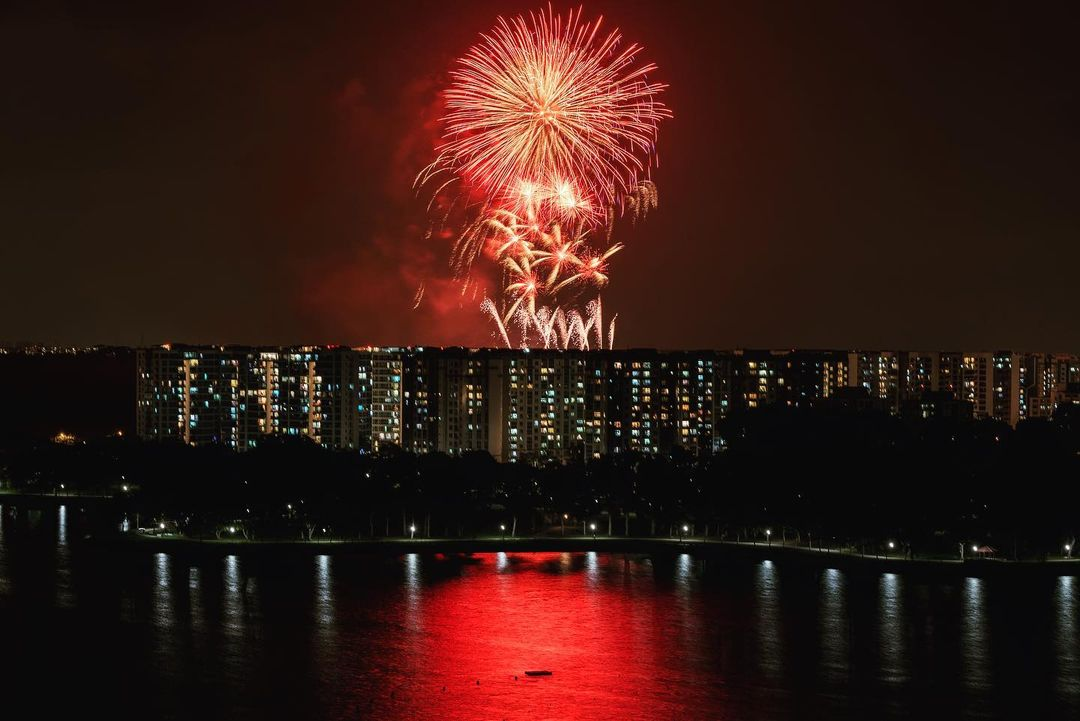 The view from the south shore of Bedok Reservoir
Image credit: @han.photographer

All the way over on the east in Tampines, head to the rooftop of Blk 739A, a multi-storey car park by Bedok Reservoir to catch the fanfare over the picturesque HDB blocks. Around that area, you’ll also be able to get a good view from the boardwalk over the reservoir, or from a higher viewpoint at the nearby Blk 716 Bedok Reservoir Road. 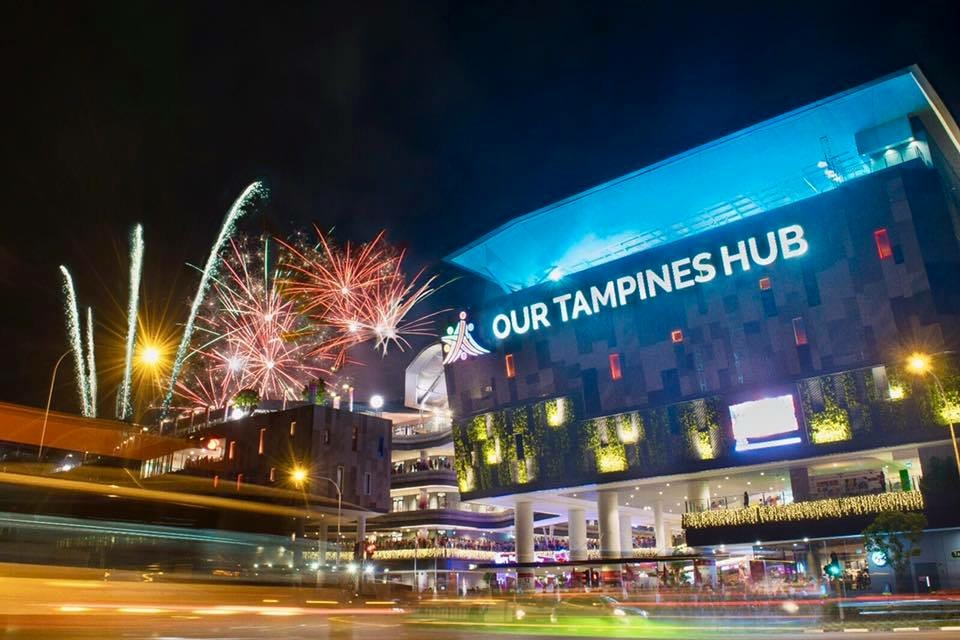 To switch things up, camp up front at Our Tampines Hub with your camera affixed to a tripod, ready to snap away at the stroke of midnight. A few streets away, you can enjoy the calmer surrounds of the urban garden atop Blk 136A Tampines Street 11, which overlooks the mall and the town’s famous doughnut-shaped Tampines Round Market. 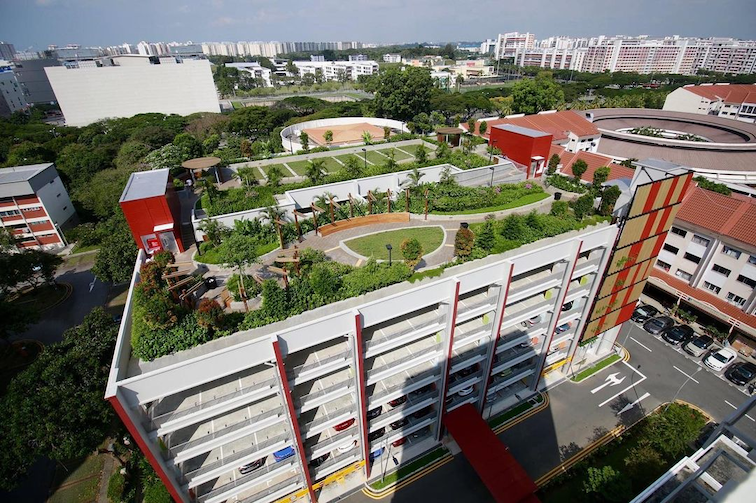 The view from the Street 13 HDB estate
Image credit: 3 wheelingtots

Launched from a field behind Causeway Point, the fireworks display at Woodlands are best viewed facing east from Blk 101 Woodlands Street 13. There, you’ll be able to catch the glow of the pyrotechnics off the surrounding blocks.

6. Yew Tee – up close from the ground at Yew Tee Hardcourt 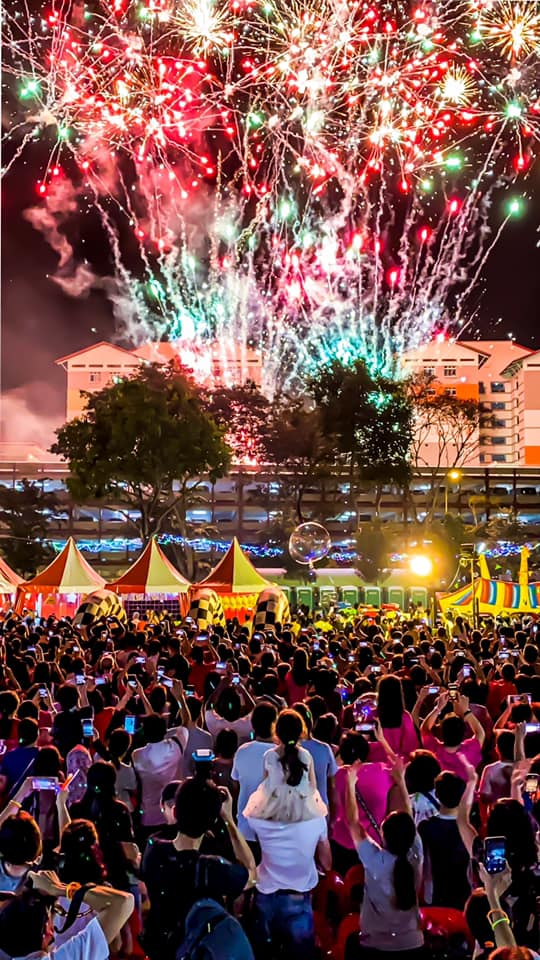 Yew Tee might have one of the most unique fireworks launch sites among these heartland displays – atop the Blk 604A car park a stone’s throw from Yew Tee Point. Previously, the town held pre-NDP carnivals on the Yew Tee Hardcourt adjacent to the car park, where residents could congregate to view the fireworks at the same time as the rest of Singapore.

If the fireworks are indeed launched from this elevated site, you might have some luck capturing this display from as far as Bukit Batok. Tall buildings like The Madeira condominium or the nearby Blk 377 Bukit Batok Street 31 get you as high as 26 storeys, and you might possibly score a top-notch view. 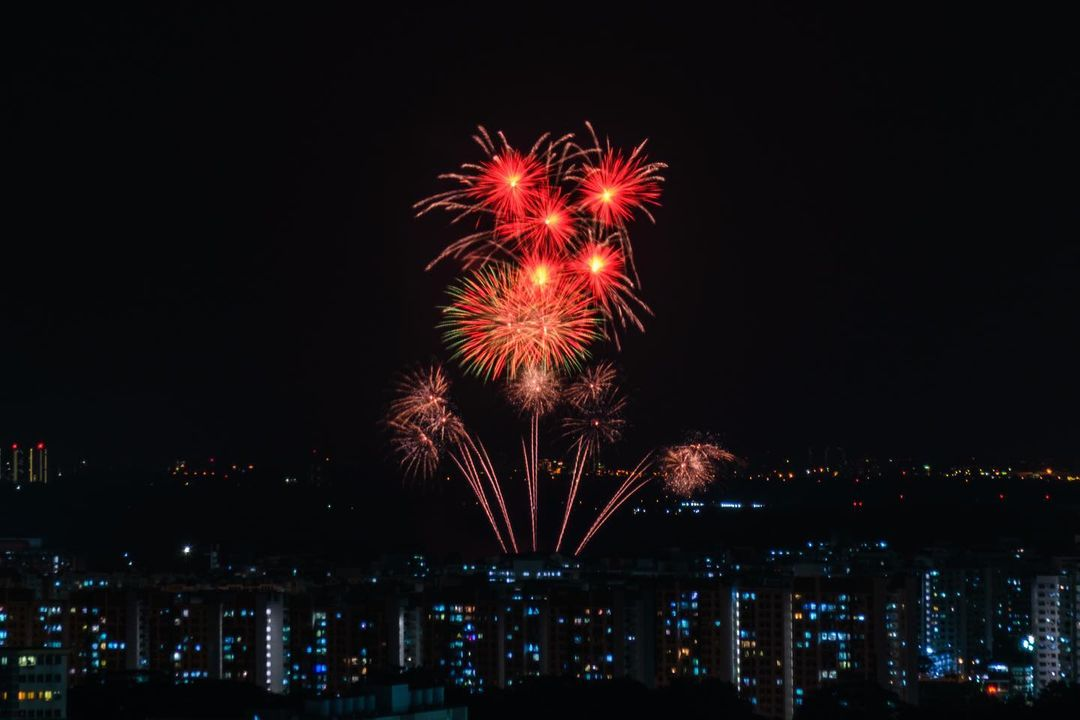 The view from The Madeira condominium
Image credit: @liewjautze 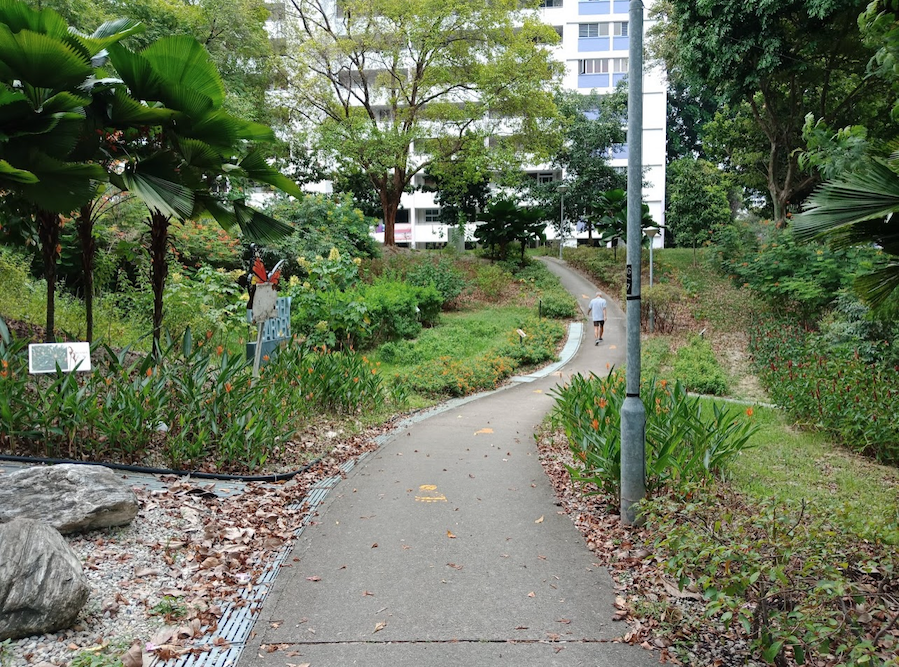 Bedok’s a bit of a wild card – there haven’t been any fireworks displays in this town in previous years, so we’ve gone with the quiet and placid Garden Hill. By day a lush oasis for jogging and leisurely strolls, Garden Hill’s open, unobstructed plateau at its highest makes for a great spot to view fireworks blooming in the distance on New Year’s Eve.

It’s one of the hidden gems of Bedok, and you’ll be sure to return throughout 2021 and beyond to enjoy its Zenlike surrounds – or even check out the Butterfly Garden and rich fauna. 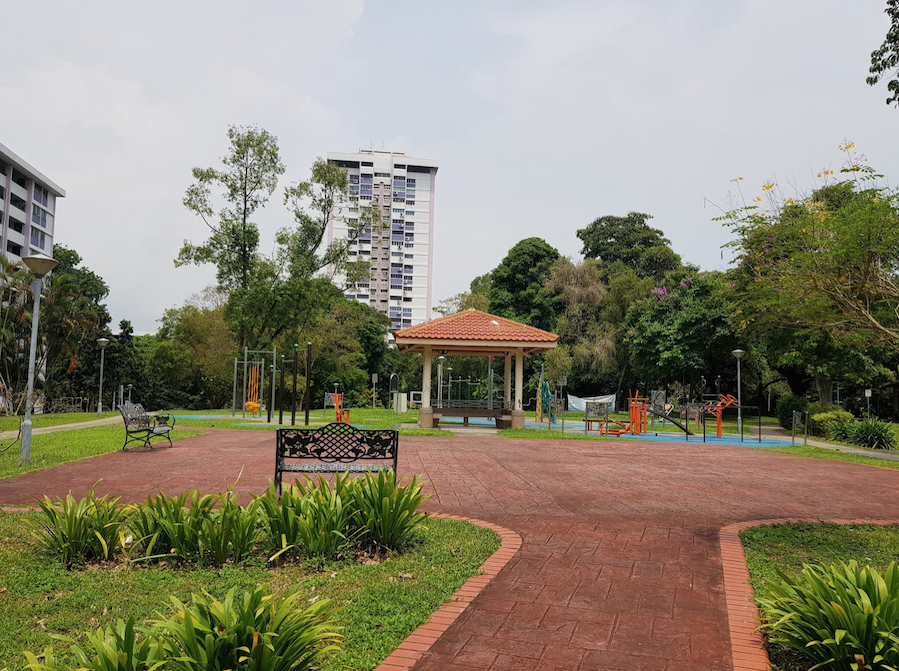 8. Boon Lay – in the open fields of Jurong Central Park 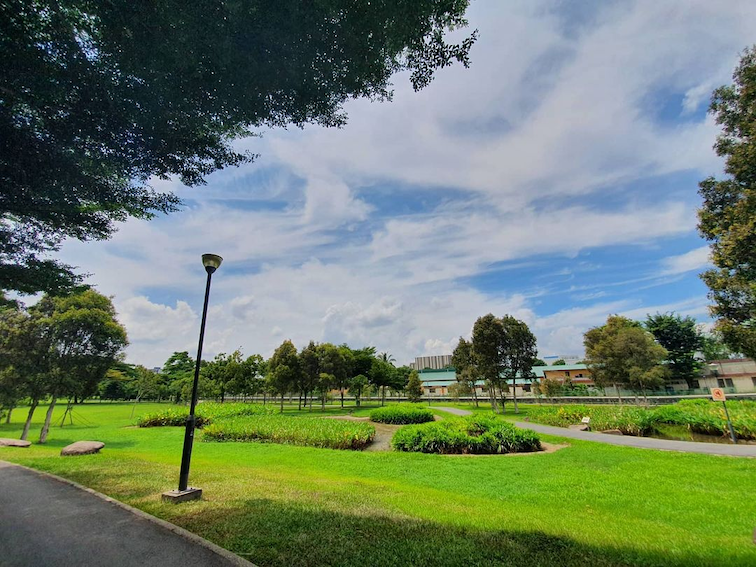 It’s hard to believe that there’s such a vast, expansive park right next to the bustling Jurong Point mall, but at Jurong Central Park, there’s plenty of space to unfurl your picnic mat to spend time with loved ones while awaiting the arrival of 2021. There’s also a new, contemporary McDonald’s nearby, that’s open 24H for that essential post-countdown supper with your kaki.

Situated on flat ground and without any nearby housing estates, the park has unobstructed views all around. This means there’s a healthy chance you’ll be able to sight the fireworks soaring high above the buildings in the distance – and also plenty of space to spread out to dodge the crowds. 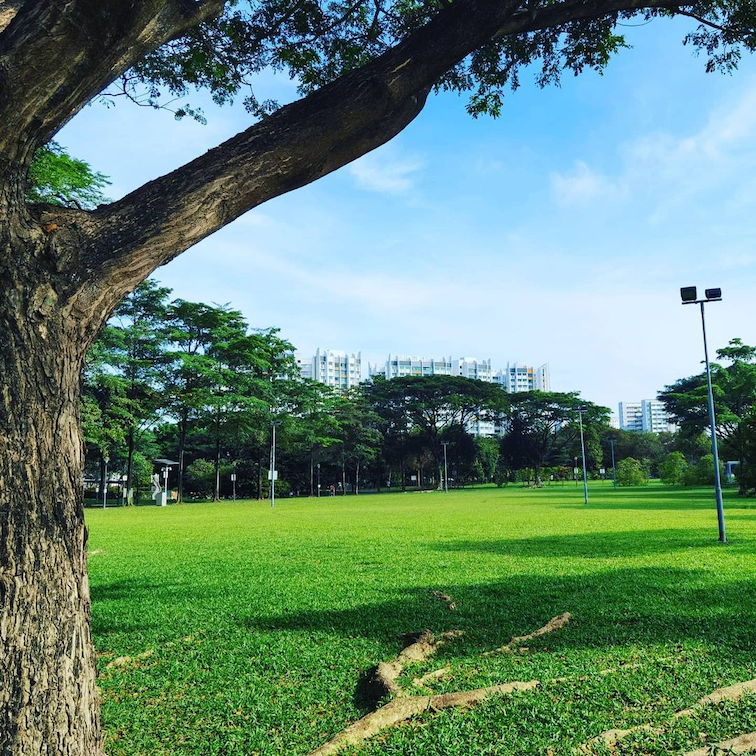 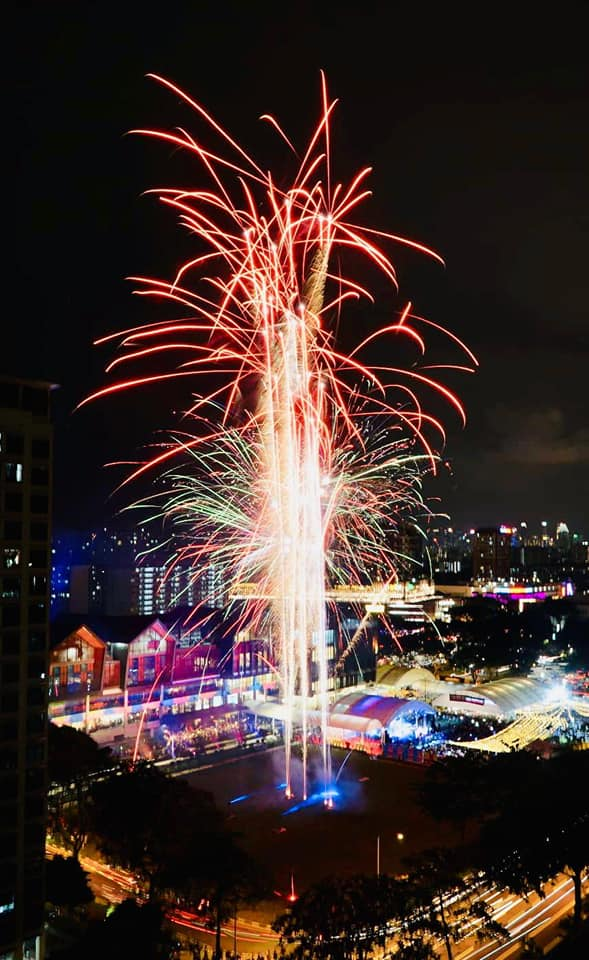 Another newcomer on this list, Geylang will too have its very own fireworks display on New Year’s Eve. There haven’t been prior National Day or NYE displays, but they did hold an extravaganza right in front of Wisma Geylang Serai when it opened in early 2019. That’s the very spot where the popular Geylang Serai Ramadan Bazaar is held.

Situate yourself over at Blk 417 Eunos Road 5, which from the 17th floor is just high enough to glimpse the city skyline in the background. 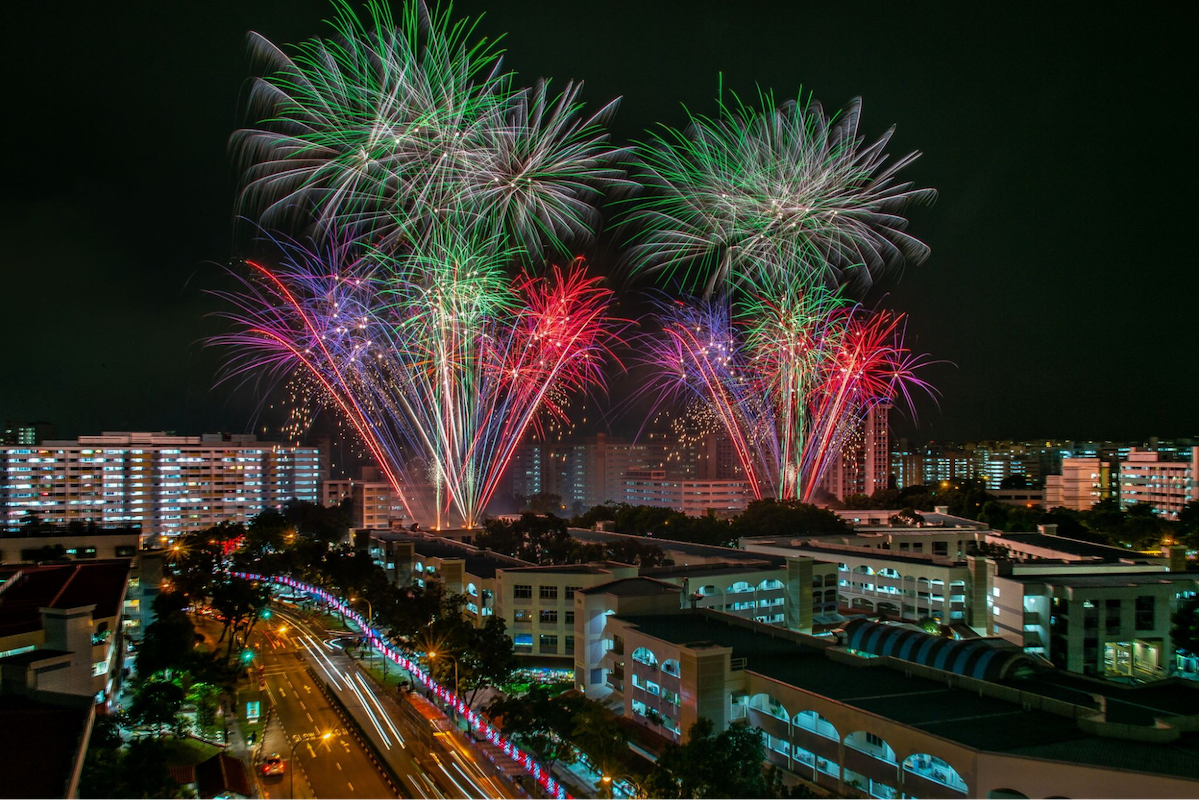 We’re expecting the fireworks at Hougang to be one of the most dramatic on this list – launched from near the squat four-storey shophouses of Hougang Village, it’s best viewed from Blk 673 Hougang Avenue 8. Even from the 11th floor at its highest point, you’ll get a poignant view of quintessential heartlands HDB blocks in the background stretching as far as the eye can see.

Hougang is one of the fastest-growing townships in Singapore, so although this site featured NDP fireworks in 2018, we’re keeping our fingers crossed that history will repeat itself again.

A section of the town of Jurong West, Nanyang is one of the most far-flung residential areas in Singapore, located a stone’s throw away from Pulau NTU and military camps like SAFTI Military Institute and Pasir Laba Camp. Despite its relative seclusion, it’ll be home to one of the fireworks displays come New Year’s Eve. 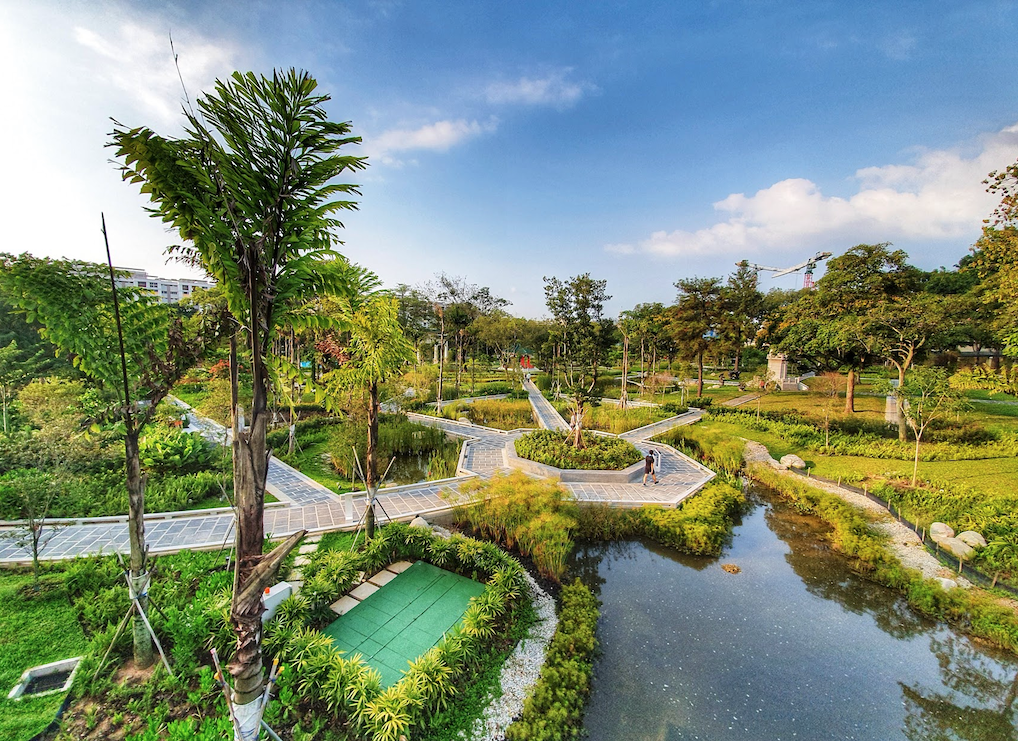 Located in NTU, Yunnan Garden will also make for a picturesque spot to camp out for the fireworks.
Image credit: Google Maps

There are not many hints about the exact location of the fireworks, but based on other locations that mostly have it near the town centre and in open fields, we hazard it might take place near Nanyang Community Club or Jurong West Sports Hall. Blk 836 Jurong West Street 81 has corridors facing southwest, overlooking these locales. 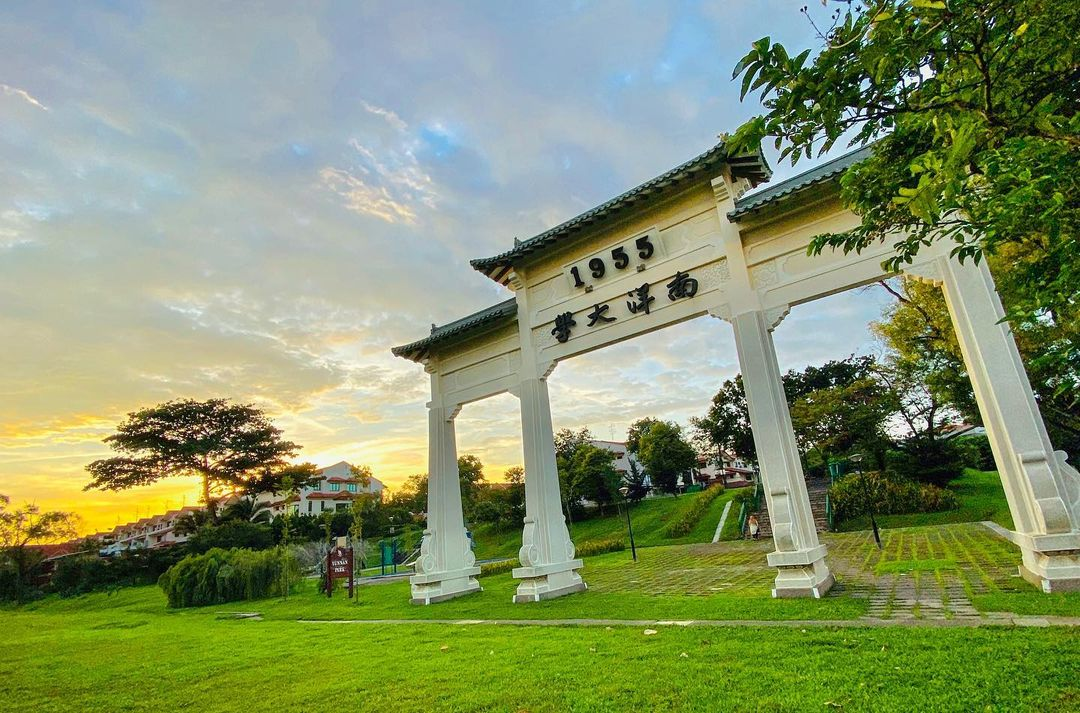 You can also frame up the iconic Nantah Arch at Yunnan Park with the fireworks
Image credit: @taiwan_ppl 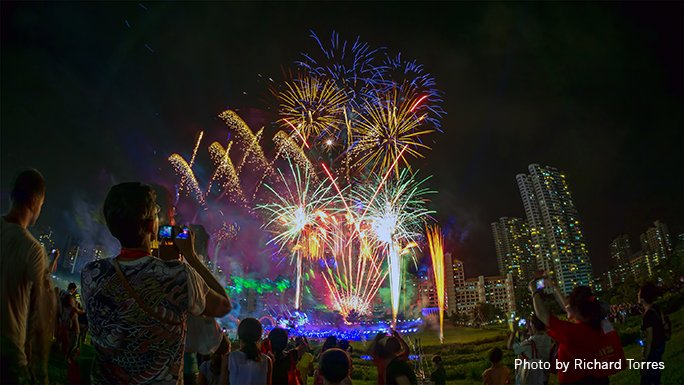 Unlike the Marina Bay fireworks that take place at the same location each year, the 2021 New Year’s Eve displays will keep you guessing till the stroke of midnight. Hardcore photographers might try to suss out the exact location of shows by looking out for telltale barriers and logistics – but most of us can just find a comfortable spot to count in the new year.

If you’re coming with a DSLR or mirrorless camera, take along a tripod that will do double duty: to help you chope your photo-taking spot, and keep your camera steady during the long exposures of around 1-5 seconds.

Those using their iPhones can use the Live photo to later turn it into a Boomerang-like animation, or even long exposure shots to capture the long streaks of light. Most Android phones offer a “Pro” mode, where you’re able to select longer exposure times – put your phone on a makeshift tripod for best results.

Ring in 2021 with New Year’s Eve fireworks in Singapore

Ring in 2021 at these top spots to view the New Year’s Eve fireworks around Singapore. Wherever you live in Singapore, you’ll be able to get a good view of the displays without travelling too far – letting you enjoy it with friends and family as you prep for the year ahead.

Check out our other articles on things to do during the New Year’s Day long weekend: 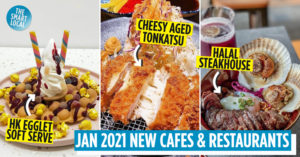 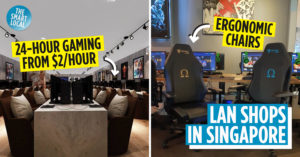