For many of us, the highlight of every National Day Parade (NDP) is always its ending segment: glorious fireworks set against Singapore’s ever-changing cityscape. But with this year’s NDP 2020 held virtually due to COVID-19, watching it on TV or catching one of the 10 fireworks displays islandwide from home might be as good as it gets for most.

But for photographers and Instagrammers who just need that perfect angle, we’ve found a solution. Here are 12 free places to catch the NDP 2020 fireworks, including heartland spots to dodge the crowds, to land you that ultimate shot. Read to the end for a convenient map to locate all the spots.

Note: Do abide by social distancing measures, avoiding crowds as much possible. Consider these lesser-known spots if in the city; else, most tall HDB flats with unobstructed views should have a view of fireworks displays islandwide.

Check out our articles on NDP activities and promotions:

1. Waterfront Promenade at the Esplanade 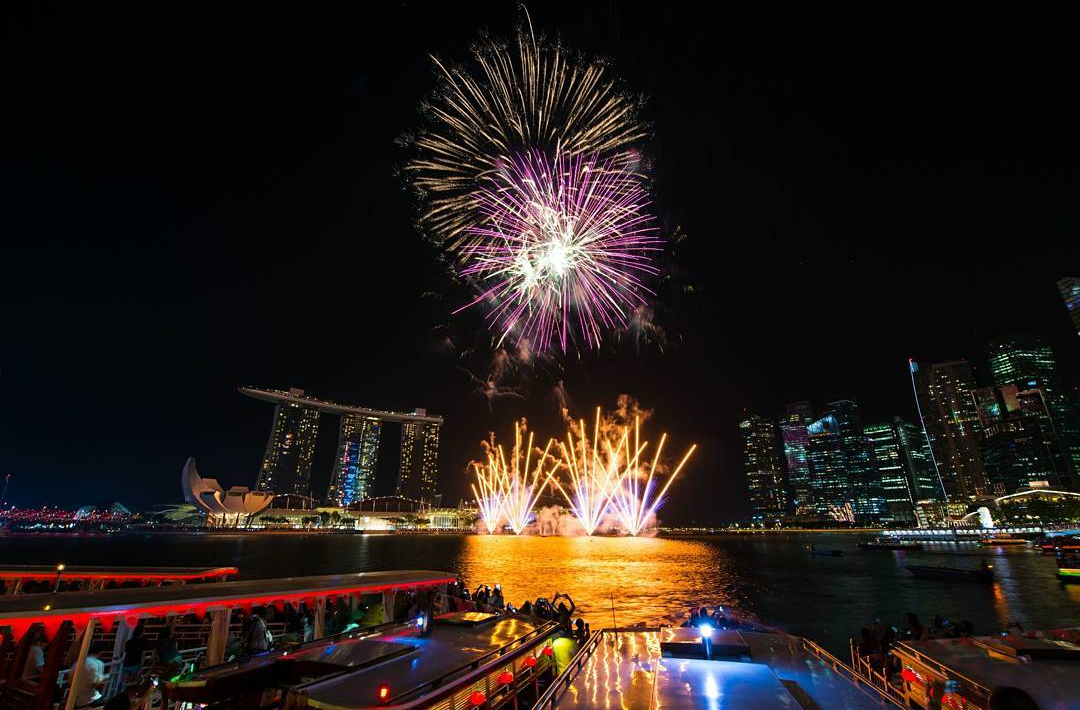 Starting from the spot closest to the action at the Marina Bay Floating Platform, the Waterfront Promenade at the Esplanade offers one of the best views of the fireworks display.

Picking a spot closer to the Jubilee Bridge lets you enjoy the colourful spectacle over the Marina Reservoir, perfectly framed by Marina Bay Sands and Marina Bay Financial Centre. 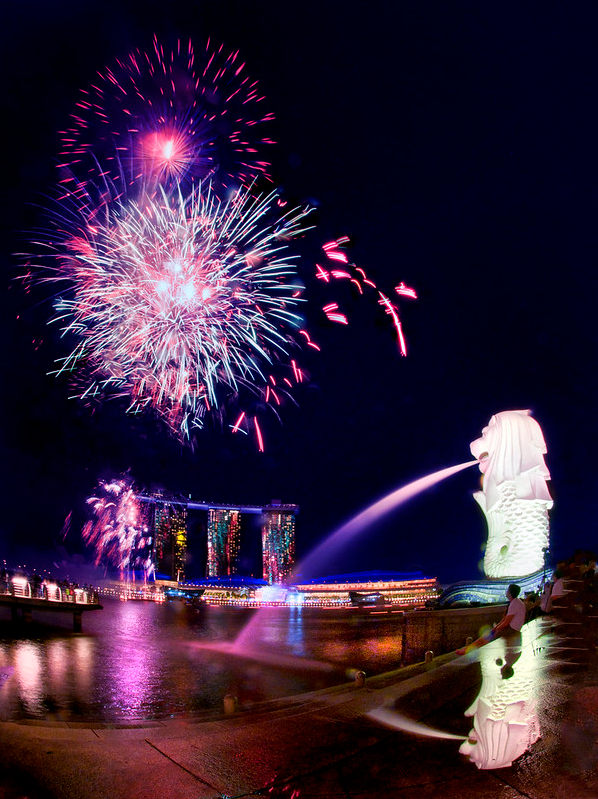 Take a short walk via the Jubilee Bridge across the Singapore River, and you’ll enter Merlion Park. But instead of striking a touristy pose with our favourite fishy feline, snap in the opposite direction. With an up-close view of the pyrotechnics, you’ll want an ultra-wide-angle lens to catch the magnificent fireworks and the iconic MBS in the background. 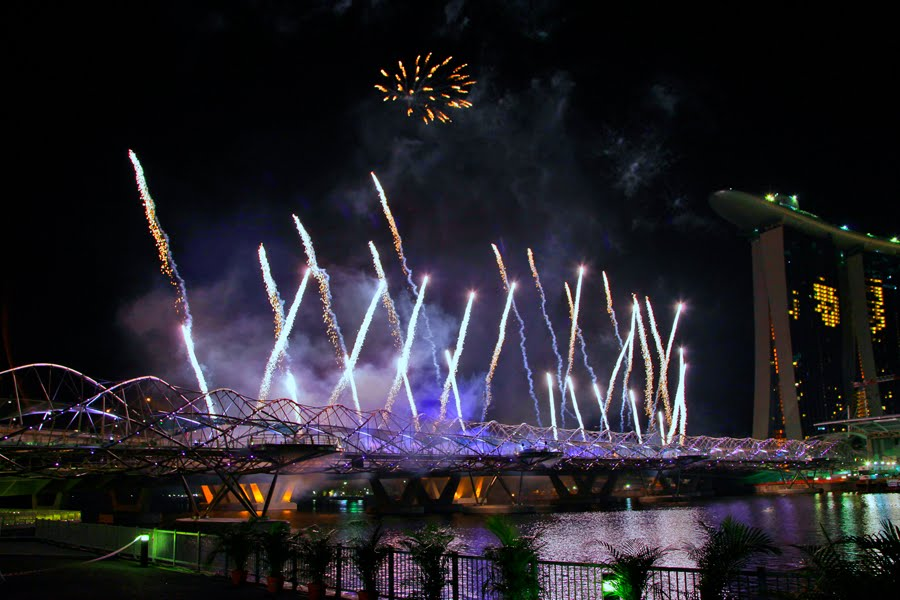 From the Esplanade, head away from the Jubilee Bridge and you’ll end up at the foot of the Helix Bridge. From here, the unfurling lotus of ArtScience Museum looms large in the foreground, giving an artistic contrast to the blooming balls of fireworks and the CBD skyline behind. 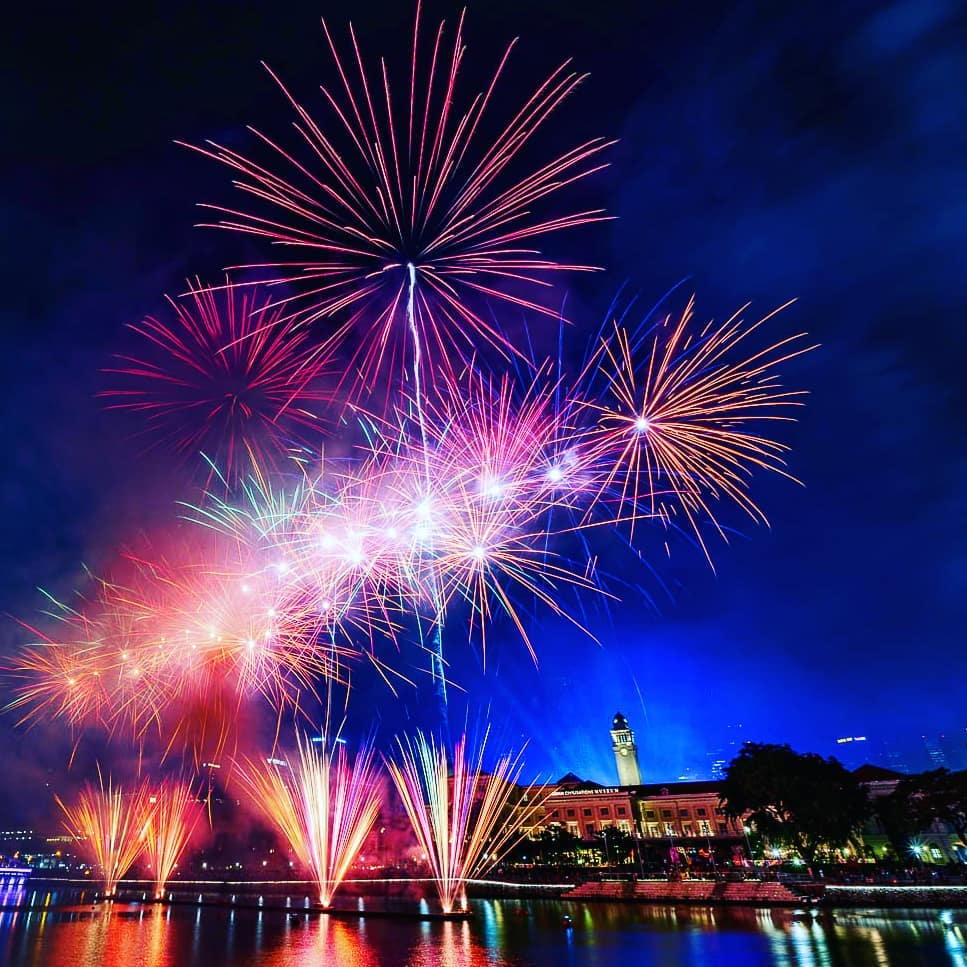 The fireworks displays with the Asian Civilisations Museum in the background
Image credit: @hitran1912

Not all spots need to be clustered around the bay area. Upriver, you can get a magnificent view of a secondary fireworks display at Boat Quay.

Surrounded by photogenic colonial-era buildings that house museums, concert halls and galleries, it’ll be difficult to take a bad photo. Just remember to also pack an ultra-wide-angle lens to catch the close-up display at this spot! 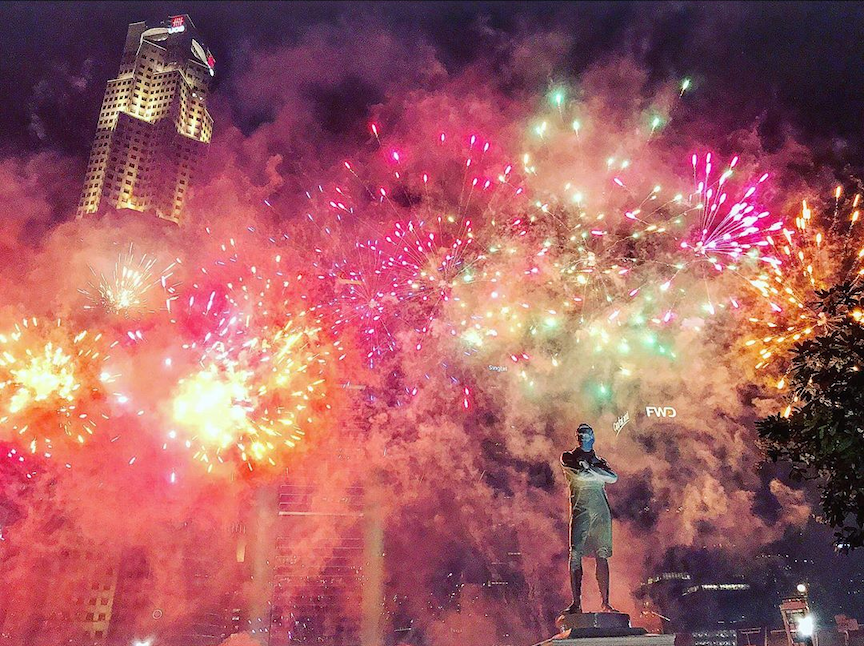 From the opposite direction across the river near the Asian Civilisations Museum and Victoria Theatre, you’ll be able to catch another view of the fireworks along the river. Up front, the iconic statue of Sir Stamford Raffles stands proud with thunderous fireworks going off behind him, perfectly backdropped by the towering skyscrapers of the CBD.

Pro tip: To ensure that Sir Stamford Raffles isn’t just a dark silhouette backlit by the bright fireworks, bring a tripod to capture a separate shot of the monument. You can then blend it with your shots of the fireworks afterwards. 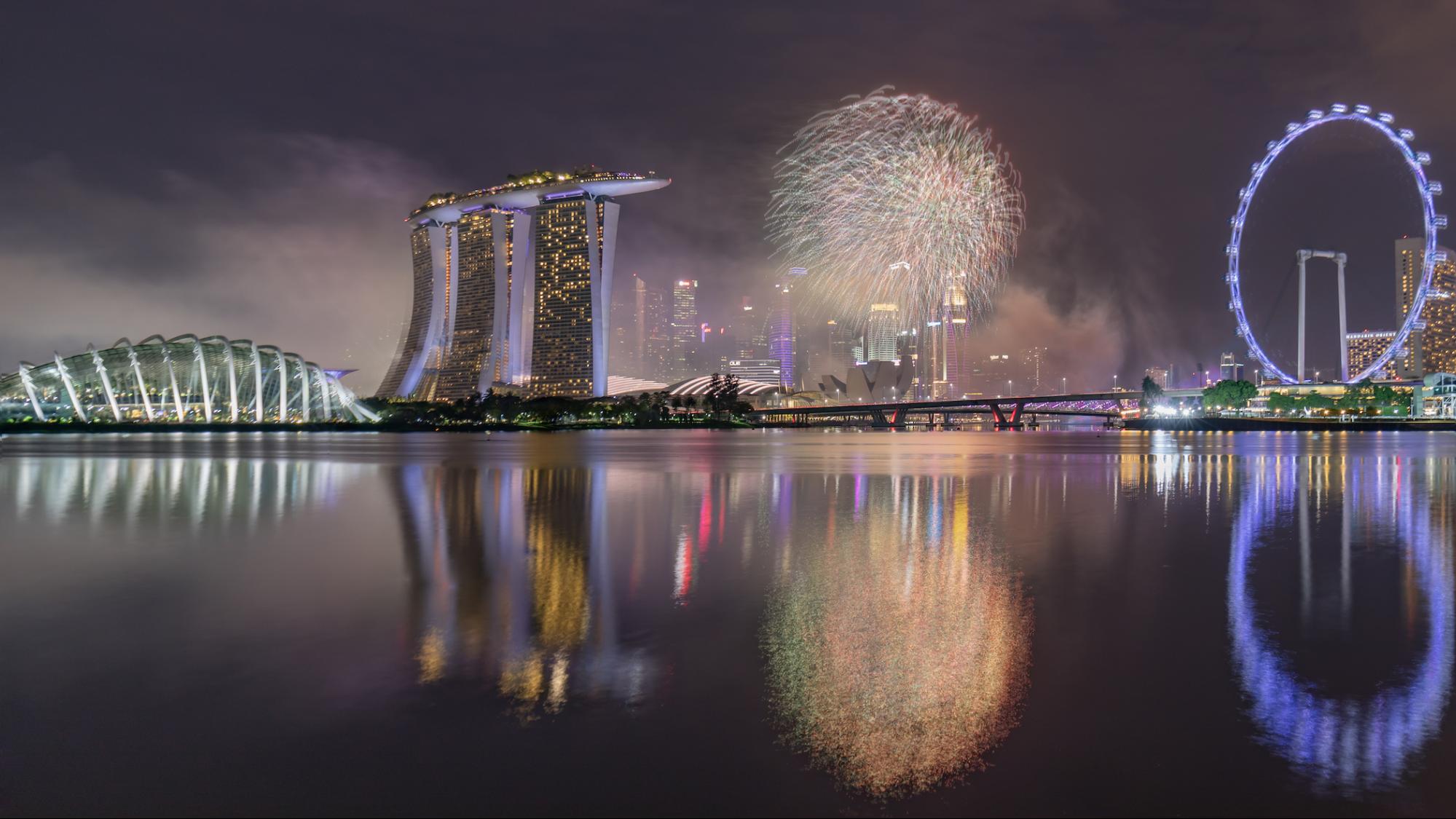 For an otherworldly shot overlooking the entire Marina Bay skyline, Bay East Garden is your best bet. From the Cloud Forest at Gardens By The Bay, the Marina Bay Sands towers, to the Singapore Flyer, this stunning spot will let you capture the whole beauty of our ever-expanding skyline.

To get here, walk across the Marina Barrage, away from MBS, and you’ll end up in this quiet, secluded spot.

Pro tip: Frame the skyline and take a few test shots before the fireworks display starts. For best results, use longer shutter speeds of around 8-10 seconds in order to achieve mirror-like smoothness with the water in the foreground. 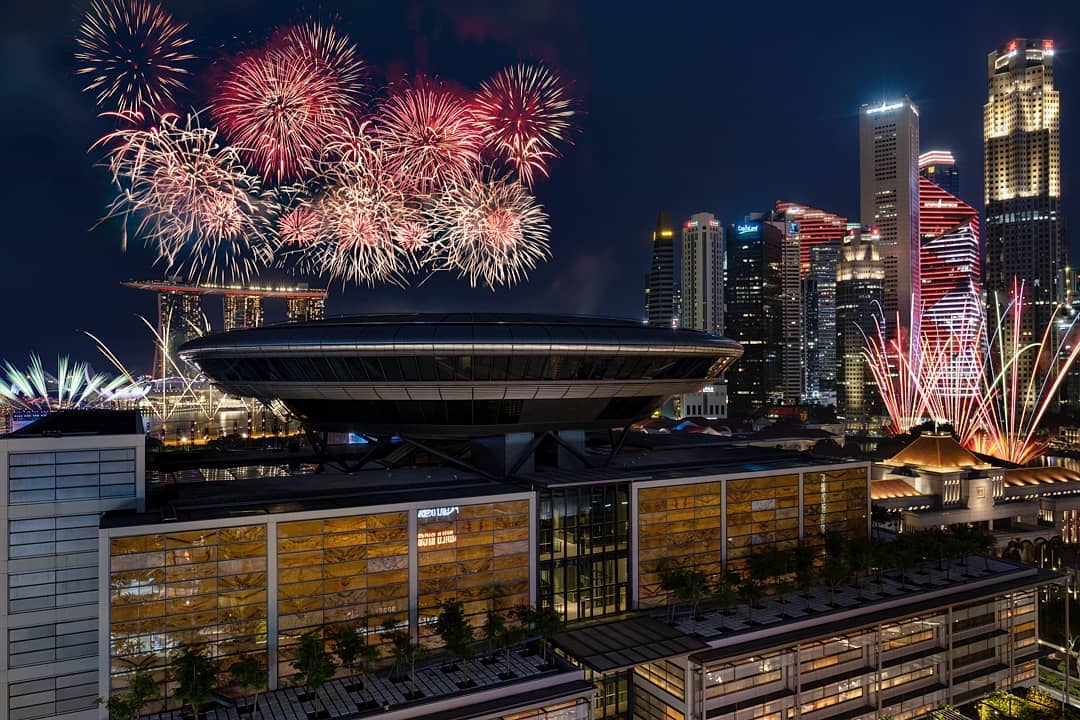 One of the newer spots on the list is the rooftop of Funan Mall. It’s just tall enough to peek over the UFO-like dome of the Supreme Court, which means you’ll have to wait for the higher fireworks during the finale to get a nicer shot.

The best part – it’s further back from the action and should allow you to get to the MRT before the rest of the crowd does.

If you’re looking to catch the multitude of fireworks displays happening concurrently across the island, here are some of the best views you can get from the residential areas around Singapore.

Note: As the location of the fireworks displays are not listed officially, we’ve compiled this list based on height and view. Also, as they are all residential buildings, be considerate and keep noise levels to a minimum.

7th August 2020 update: The list of heartland fireworks locations has been released. 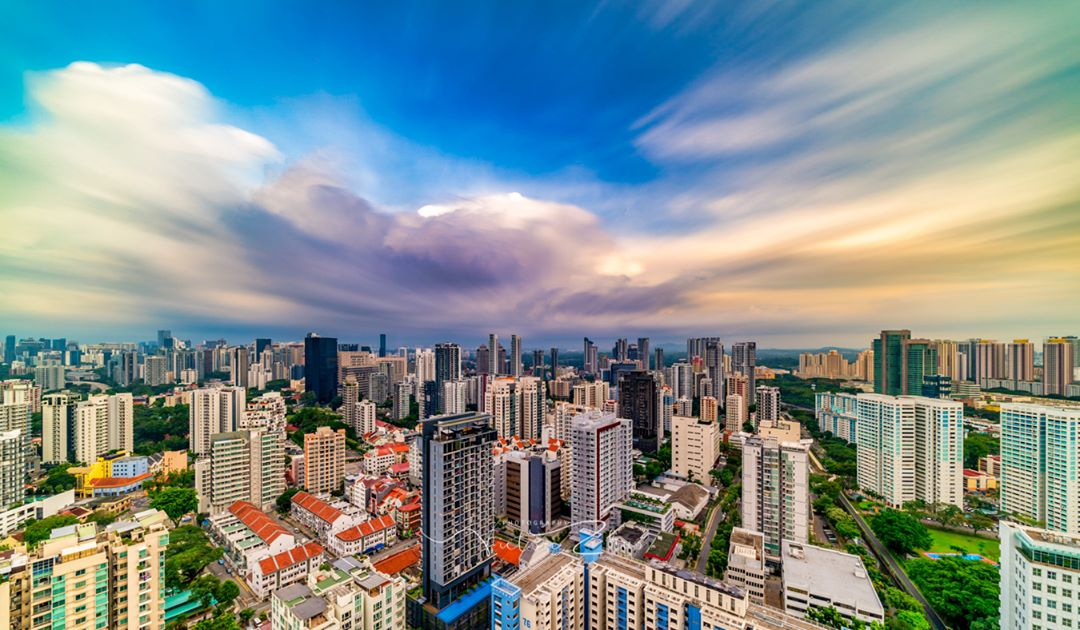 Whampoa is one of the oldest neighbourhoods in Singapore, so when a 40-floor BTO is built in the middle of the district, you can expect unobstructed views all around.

From the top floors of Whampoa Dew, a Southward-facing window will let you catch the fireworks from this breathtaking vantage. While you can go wide to capture the colourful, multifaceted cityscape, it’ll help if you bring a powerful zoom lens to get a clearer view of the fireworks. 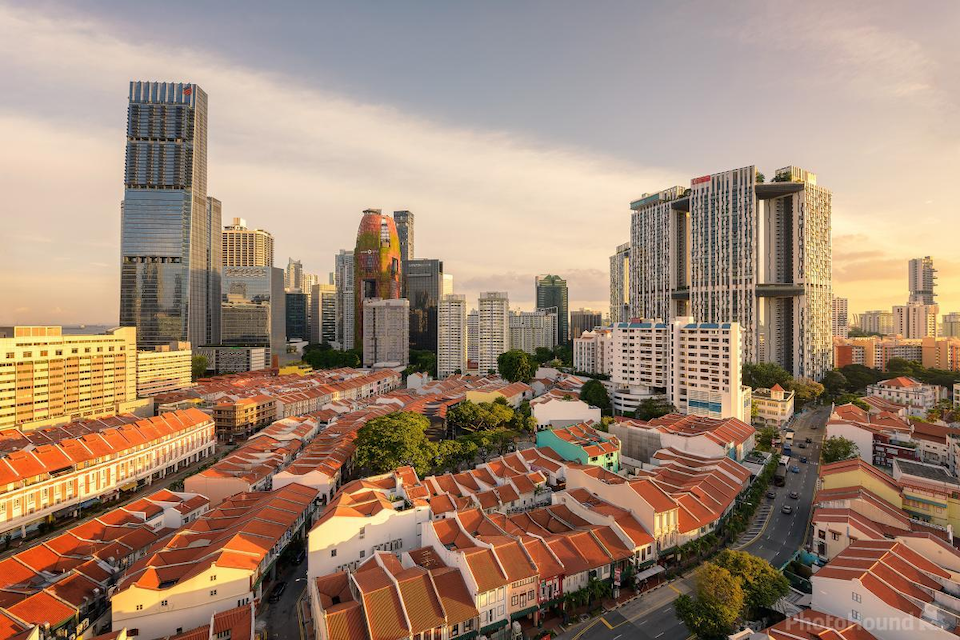 For that quintessential shot of old-meets-new Singapore, head to 334 Kreta Ayer Road, a HDB flat right smack in the middle of Chinatown. Here, you can easily spot the tallest building in Singapore and the tallest public housing development in the world – Guoco Tower and Pinnacle@Duxton.

Pro tip: Like most other locations, be sure to scout it during the NDP preview to pick the best spot for your shot. 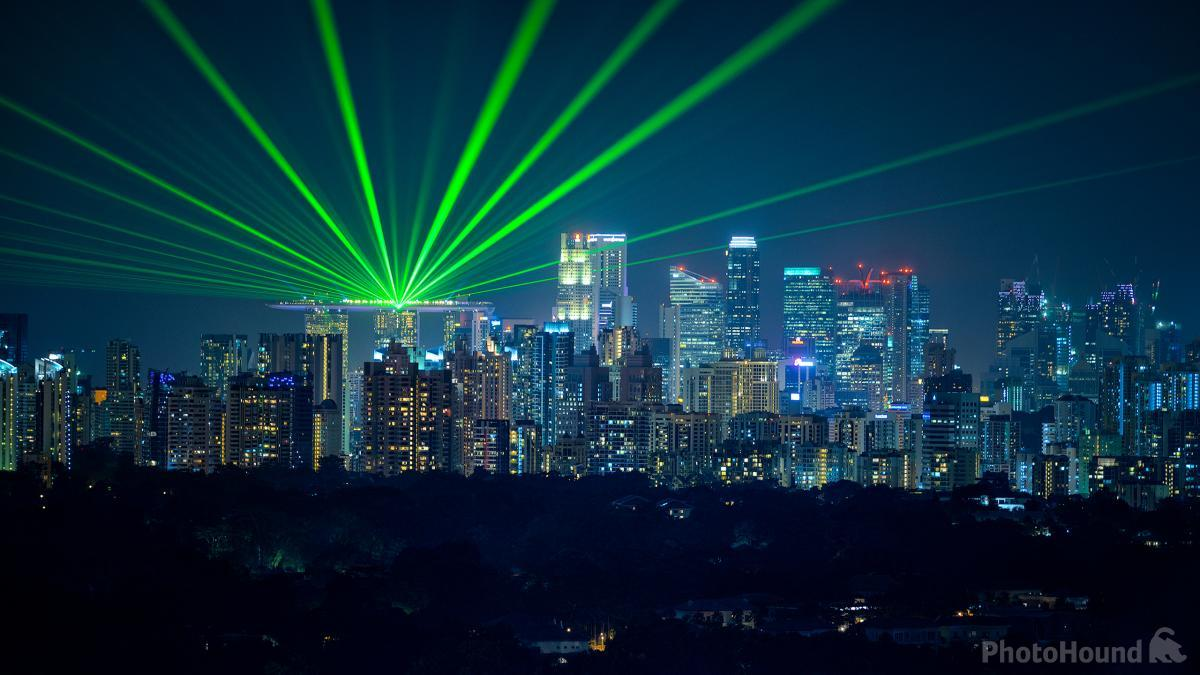 It might come as a surprise to you, but the laser shows from MBS can be seen all the way from the West. At the 40 storey-tall 18A Holland Drive HDB block, grab a pair of binoculars to gaze at the city from afar.

Facing Southeast, you should be able to see the MBS fireworks in the distance – hopefully joined by the many other displays concurrently happening islandwide. 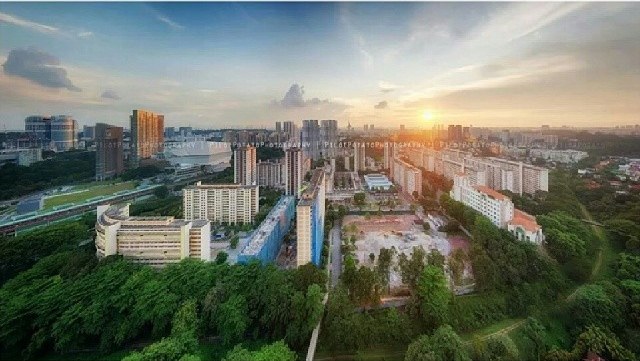 Gaze the opposite direction toward the West, and you’ll catch a beautiful sunset.
Image credit: @potato_grapher 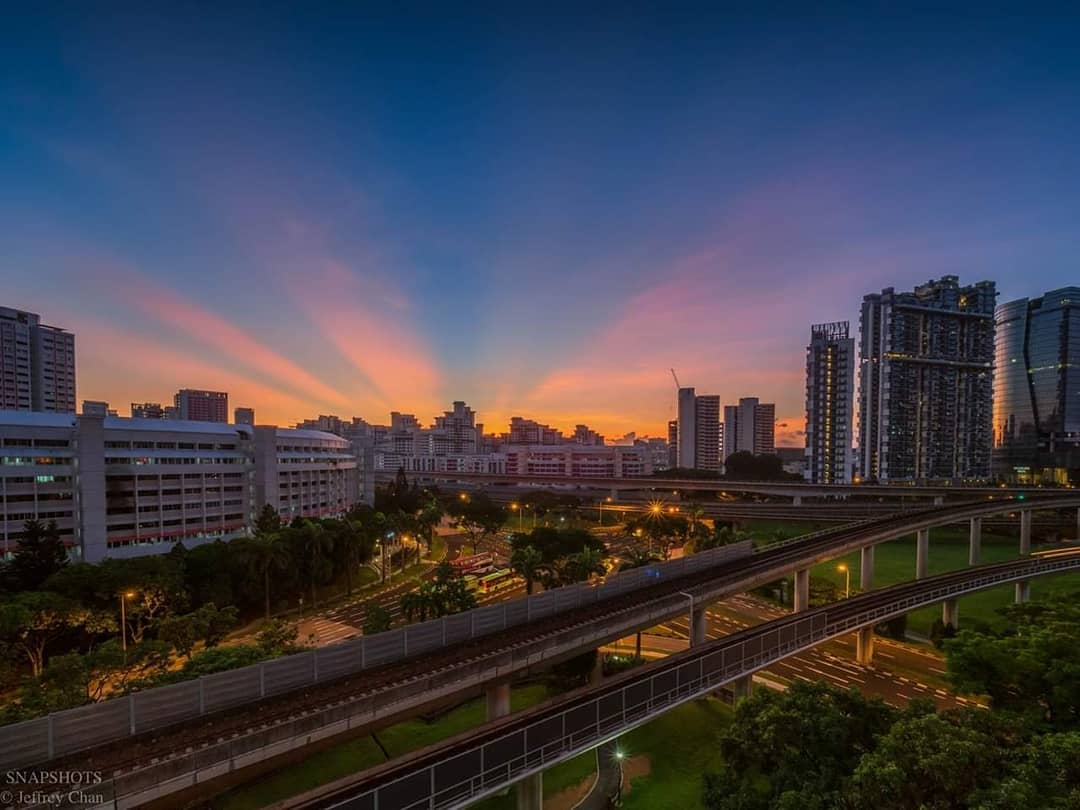 Compared to the other high-rise spots in the heartlands, this one is closer to the ground. At 101 Jurong East St 13, wide views of the gently curved MRT tracks in the foreground and the HDB blocks behind make for a stunning composition during both day and night.

Pro tip: Use a longer exposure to capture light streaks from passing MRT trains and traffic from the street, blending it with your image of the fireworks. 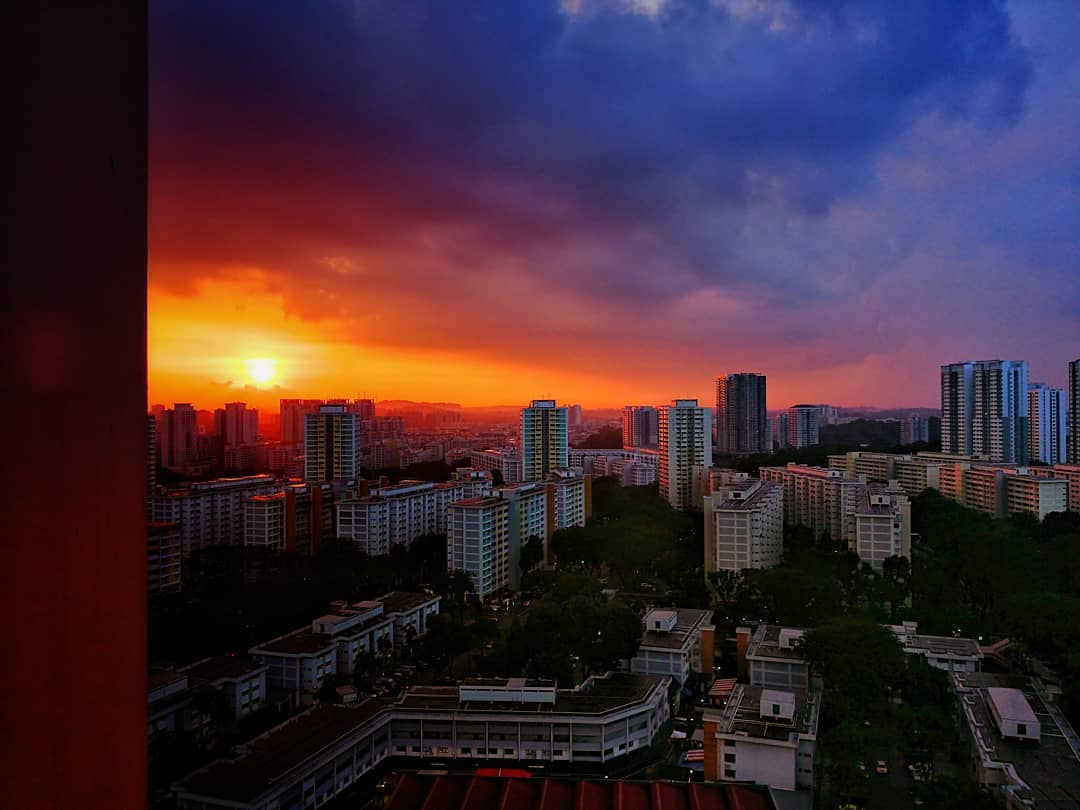 From this Westward-facing 34-storey perch, you’re usually able to catch one of Singapore’s glorious sunsets. But with the sweeping views, you might be able to spot some of the satellite fireworks displays in the distance too! 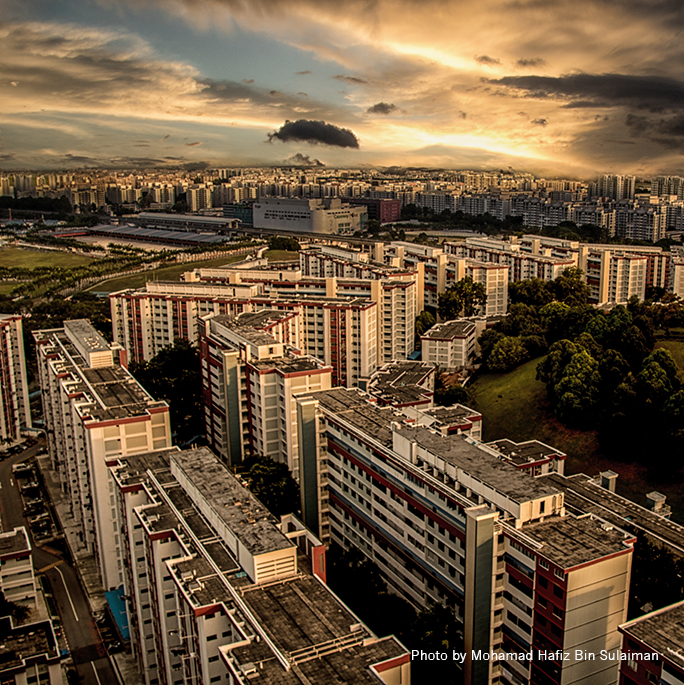 A stone’s throw from Causeway Point, 123 Marsiling Rise serves up a birds-eye view of our Northern heartlands. From this viewpoint, you’ll be greeted with orderly HDB flats cascading into neighbouring towns and areas – meaning there’s a high chance you’ll catch a glimpse of fireworks in the distance.

Tips for fireworks viewing and photography 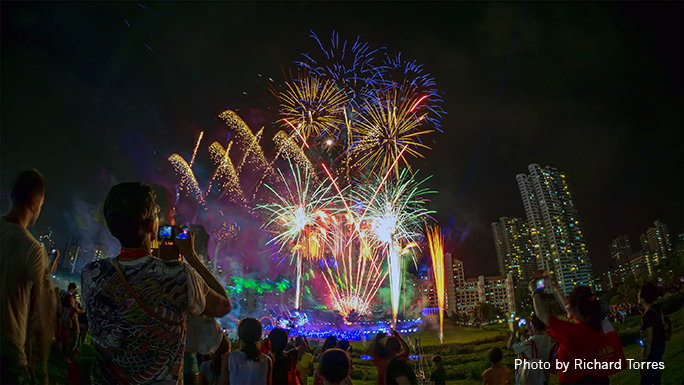 When it comes to landscape photography, it all comes down to position, position, position. You can take a page out of experienced photographers’ books by scouting out locations during the last rehearsal on 1st August 2020, with the fireworks display happening usually after 8:00PM.

Once you’ve sussed out the perfect position to take the shot, come early on the day itself and plant your tripod to chope your spot. Whether you’re in the immediate Marina Bay area or the heartlands, come prepared with the right lenses that best view the fireworks – whether it’s up close or in the distance.

For those rocking their smartphones, makeshift tripods can do the trick. If you’re a confident photographer, you can use a camera app with a “pro” mode to take shots with slower shutter speeds. This will capture great-looking streaks in the air as the fireworks bloom outward.

But for a fuss-free point and shoot experience, some Android phones are able to automatically tweak the camera settings to perfectly capture fireworks. For iPhone users, toggle on the Live photo function to turn your snapshots into a boomerang or a long exposure shot later.

Catch NDP fireworks 2020 from these spots

Dotting the Marina Bay area are places both seasoned photographers and Instagram-lovers know and love. While these photo spots are tried-and-tested, the additional free places in the heartlands will let you catch the NDP 2020 fireworks displays around Singapore while dodging crowds.

Also, check out our article on places to catch the New Year’s Eve fireworks display.

For more articles on photography ideas in Singapore: 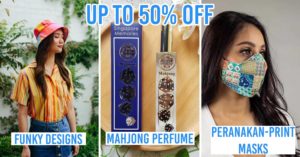 Design Orchard Has Up To 50% Off Locally Made Face Masks & Clothes, For NDP Outfits Without Red & White
7 Common Cleaning Mistakes That Are Actually Making Our Homes Dirtier & How To Correct... 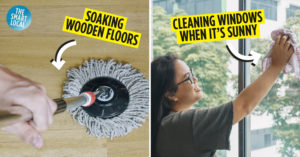