Singapore’s skyline is our pride and joy, known the world over from the MBS “ship” – popularised by Crazy Rich Asians and Netflix’s Singapore Social – to the abundance of CBD skyscrapers grazing record-breaking heights. In terms of iconic local buildings, even the hidden gems which only locals are privy to seem to boast aesthetics as well as nostalgia.

Here are 8 building transformations in Singapore, showcasing the before and after of residential blocks, theme parks, sports stadiums and even a parking station turned design centre you probably never knew existed.

Besides iconic buildings in Singapore, check out more articles about local nostalgia here: 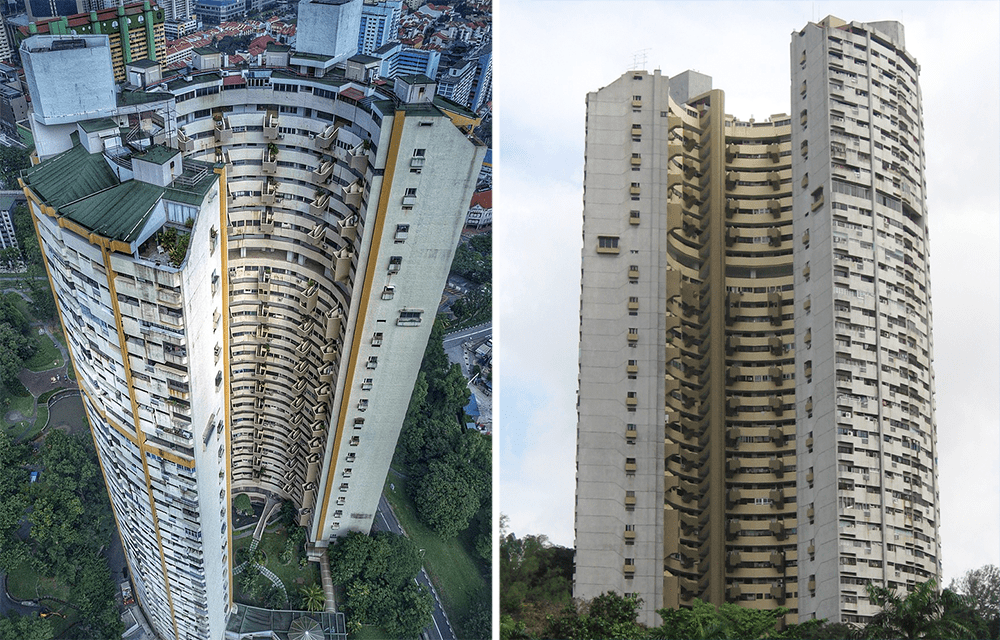 News of this gorgeous residential building in the Chinatown-Outram district to be torn down and redeveloped brought waves of sadness to many Singaporeans, with photographers flocking to the area to snap the unique curved facade before all 38 storeys were scrapped. 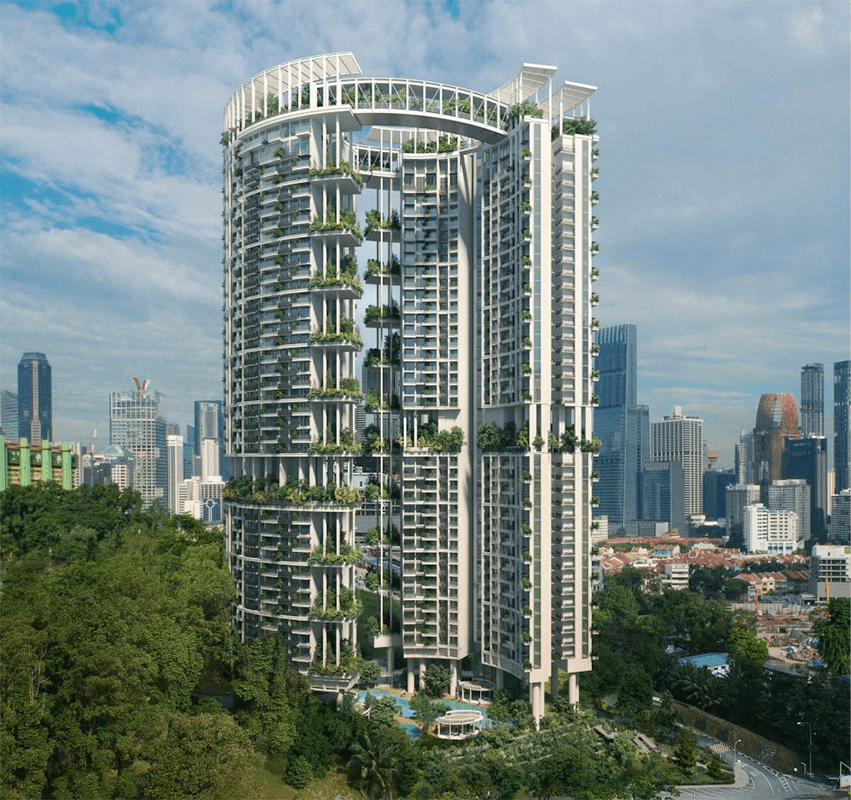 Shaped like a horseshoe or incomplete circle from aerial view, Pearl Bank Apartments was sold to CapitaLand in February 2018. The space is set to be transformed into a 39-floor condo named One Pearl Bank, which is said to retain the original cylindrical structure while connecting the gap with a futuristic “halo” light-up skybridge. 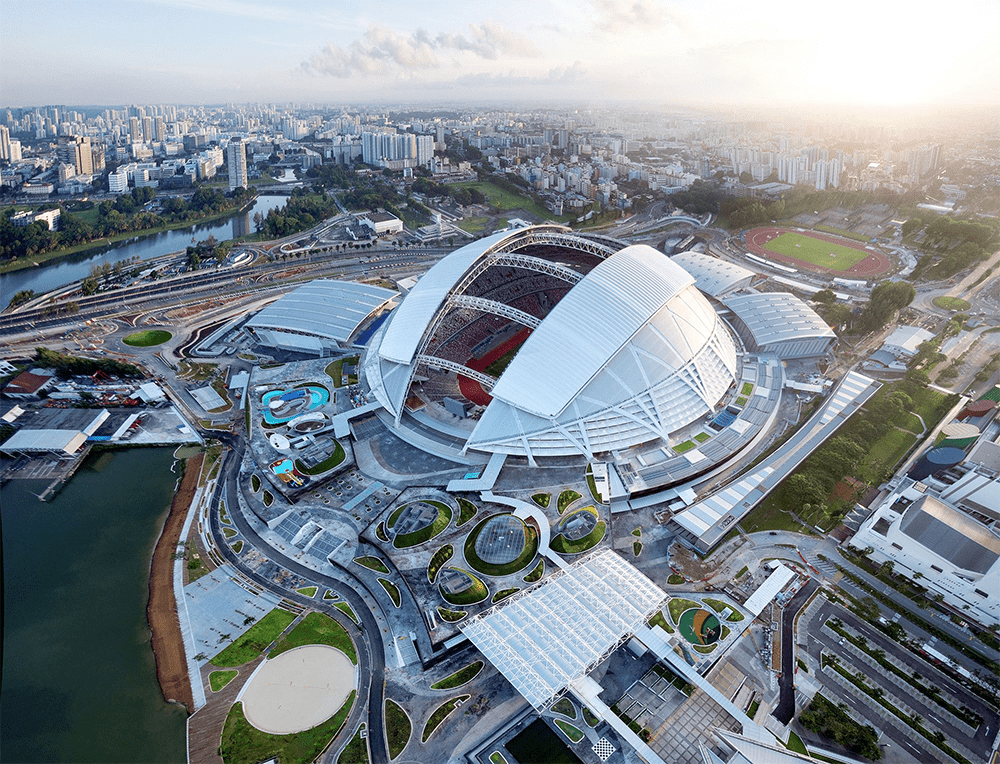 Retaining its original name, Singapore National Stadium is a Tron-like sight to behold for drivers whizzing down the highway, with a sleek domed structure glistening in the sun. Fitted with a high-tech retractable roof, the new National Stadium hosts matches for football, rugby and cricket, as well as athletics tournaments and concerts from Jay Chou, Coldplay and BTS. 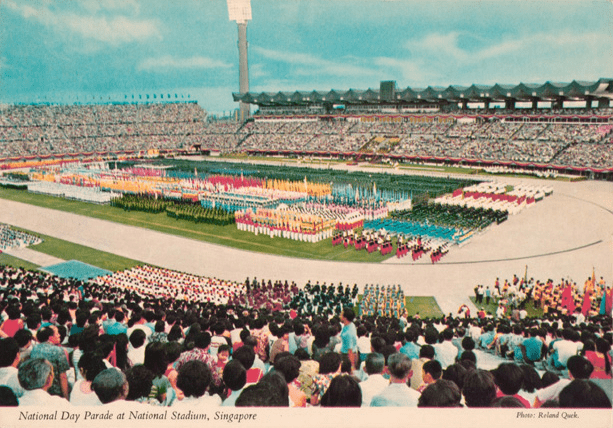 Back in the day, the National Stadium was a sprawling open-air space where patriots assembled every August for NDP and its rehearsals. After hosting only 1 NDP in 2016, the new stadium was deemed an unsuitable venue. Turns out, the presence of a dome roof proved unsafe for the SAF Parachute Team to perform their signature act of sky-high descendance. 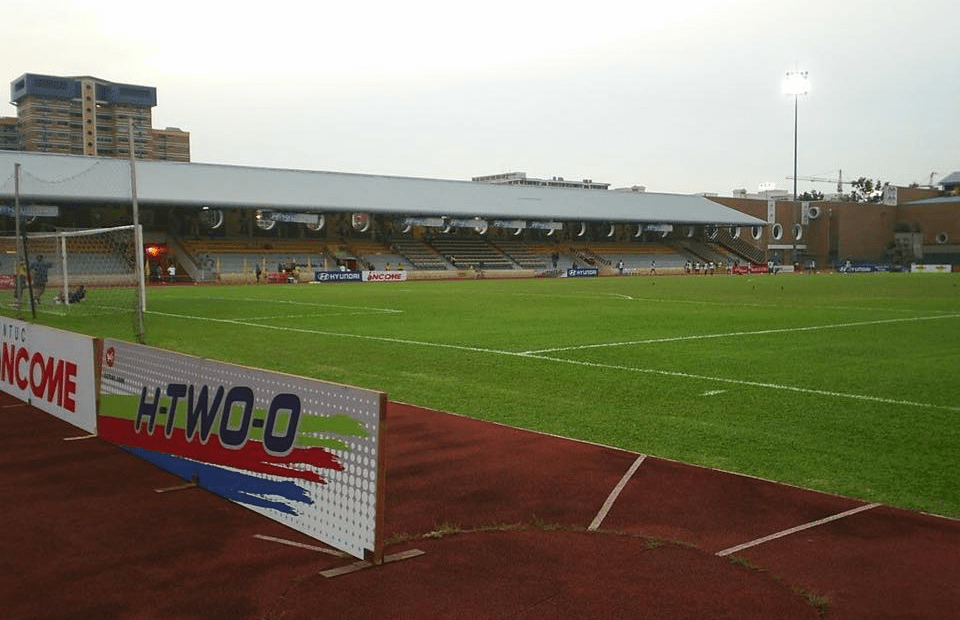 Back in the late 80s, Tampines Stadium was built along with Tampines Swimming Complex in a bid to provide more fitness and recreational spaces for surrounding neighbourhoods. Local soccer fans would also be familiar with the fact that it was the former home ground of our very own S-League Tampines Rovers FC. 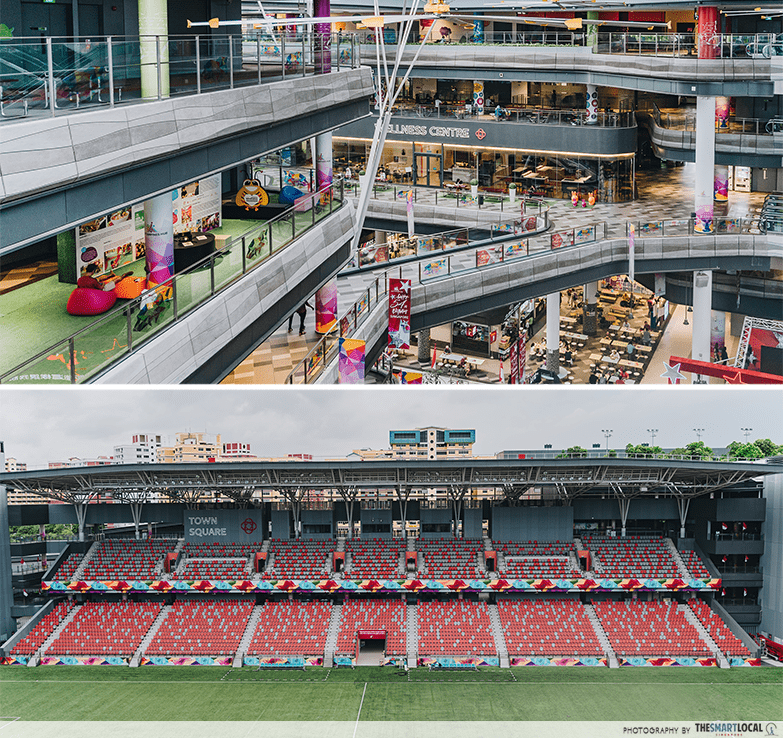 Plans to transform the stadium into what is now Our Tampines Hub were first announced in 2011, leading up to Singapore’s very first “integrated community and lifestyle building” launching in 2017. This cheem phrase alludes to how there’s something for everyone within the facility, from sports arenas and rooftop gardens to KTV spots and an outdoor movie screening space. 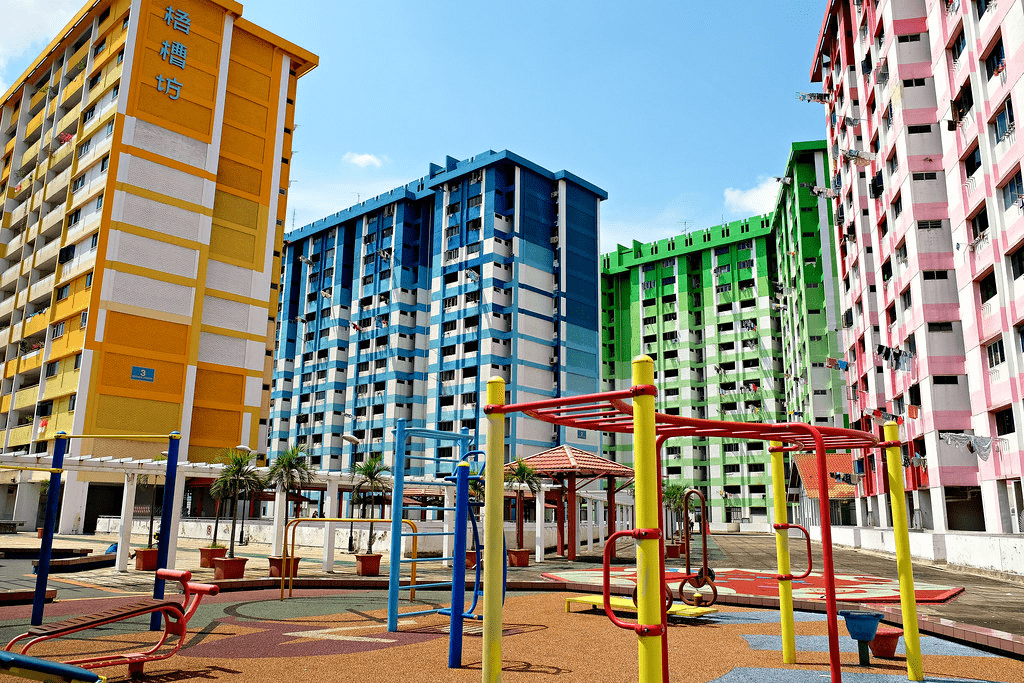 The colourful blocks and photogenic rooftop were paradise for shoots, be it among professional photographers or for a casual Instagram OOTD. Rochor Centre also provided a feast for the eyes along the Bugis stretch, amidst modern shopping malls and a heritage-rich cluster of temples, mosques and cultural spots. 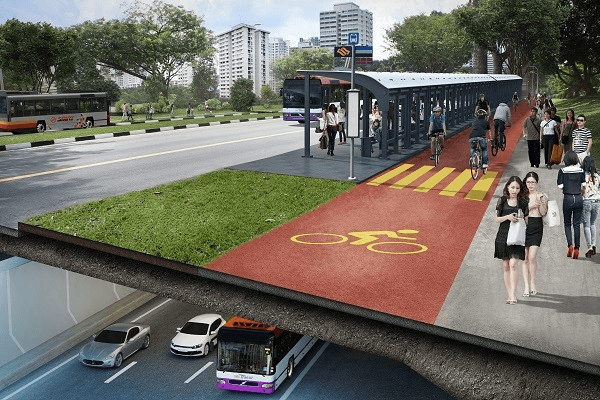 Although it was a great loss bidding farewell to this neighbourhood landmark, the space will be occupied by an upcoming expressway slated for completion in 2026. Spanning 21.5km, the North-South Corridor will ease congestion on CTE and is forecasted to be able to reduce rush hour journeys for North and Eastside dwellers by up to 30%. 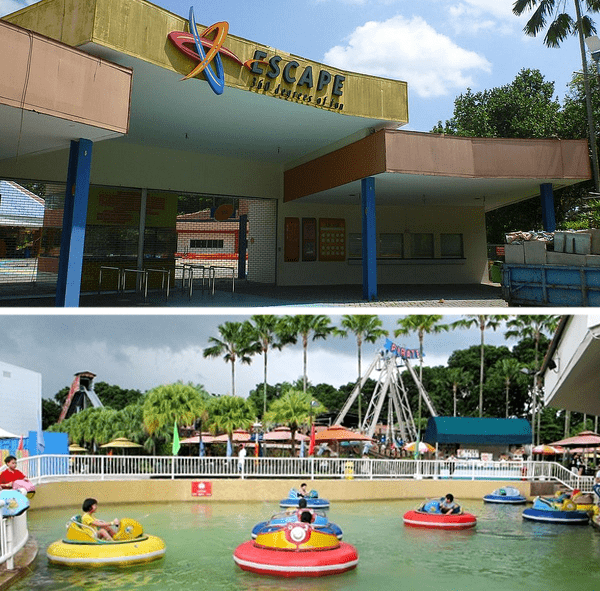 Located in Downtown East, Escape Theme Park was the go-to for Singaporean youths every time the school hols rolled around. There was an equal mix of high-thrill rollercoasters as well as chill family rides and water features, satisfying the adrenaline needs of daredevils before USS opened in 2011. 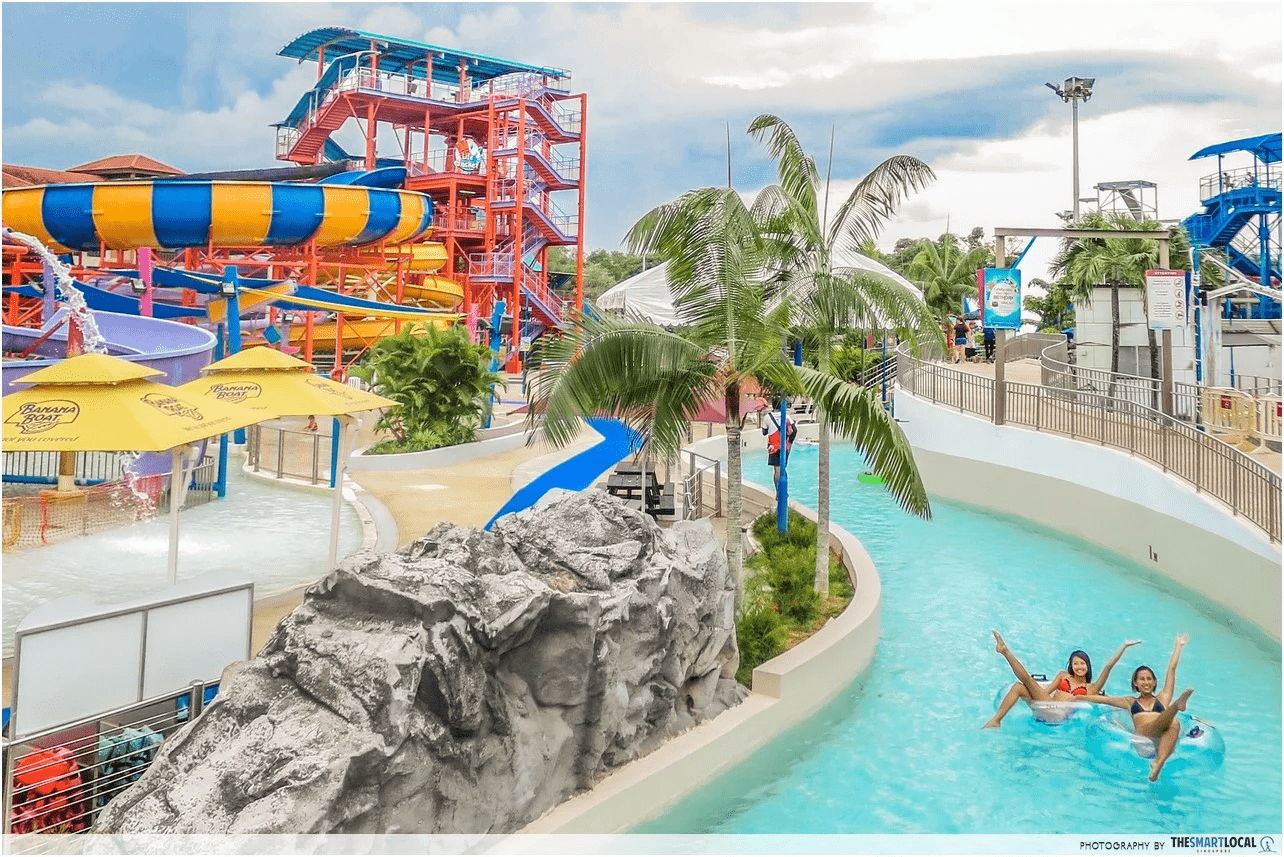 After over a decade of being an Eastside gem, Escape Theme Park closed to pave way for Wild Wild Wet’s extension. The water theme park doubled in size to measure 3.8 hectares after the $200 million revamp, which is roughly the size of 5 football fields. This was enough space to fit in 6 brand spanking new rides and attractions, including a “Shiok River” for you to cruise down. 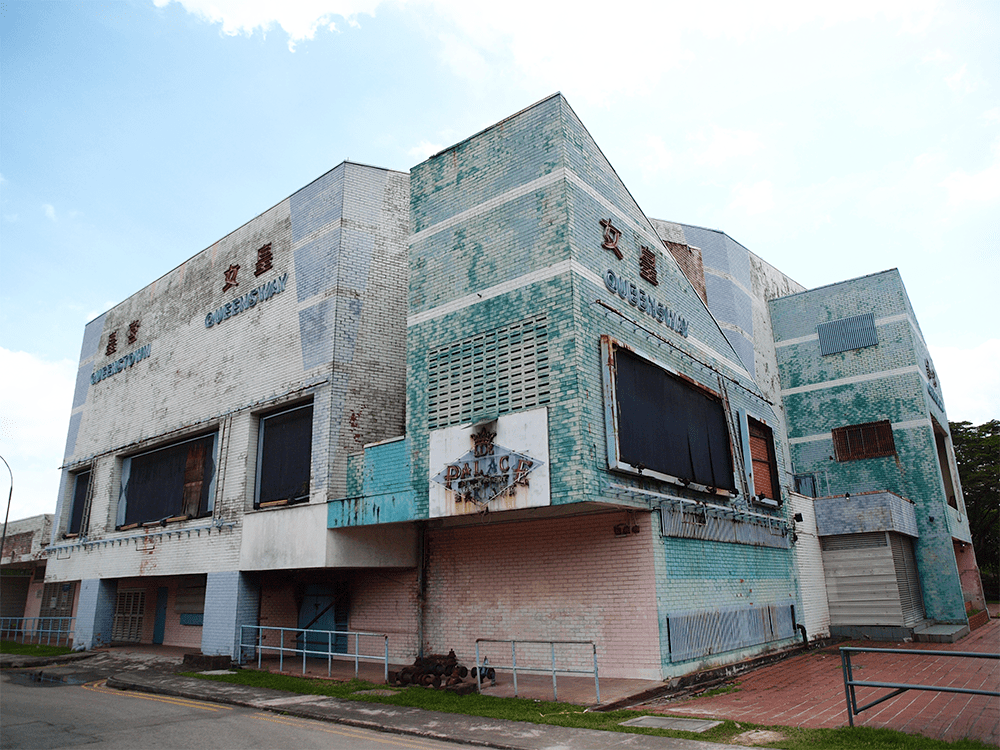 Image credit: Singapore Through My Eyes

When it comes to more antiquated and low-key iconic buildings in Singapore, those residing in the South-Central region would have seen this dilapidated building, formed out of pastel brickwork which looked straight out of an apocalyptic movie towards its demolition. The Queenstown Cinema & Bowling Centre was torn down in 2013, but operations had ceased since 1999. 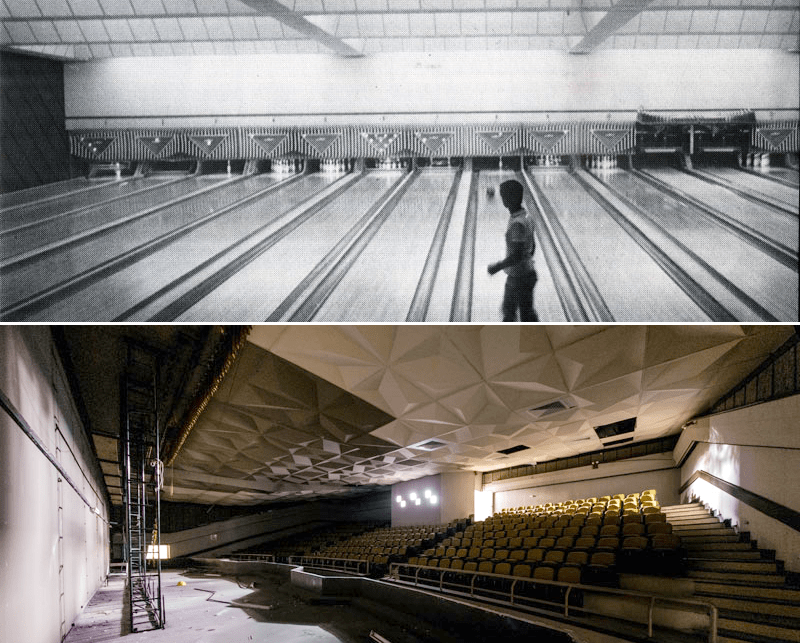 The 18-lane bowling alley was said to be the “first of its kind” imported all the way from the USA, while movie tickets were available for only 50 cents to $1.50 a pop.
Image adapted from: State Of Buildings

The cinema halls were even converted temporarily to a LAN shop and billiards centre, in a bid to appeal to the younger crowd when the noughties hit. Alas, the premises soon succumbed to a fate of permanent closure. As of 2018, the site is awaiting development to become a 6-storey commercial building with shops, restaurants and – sticking to its roots, a cineplex. 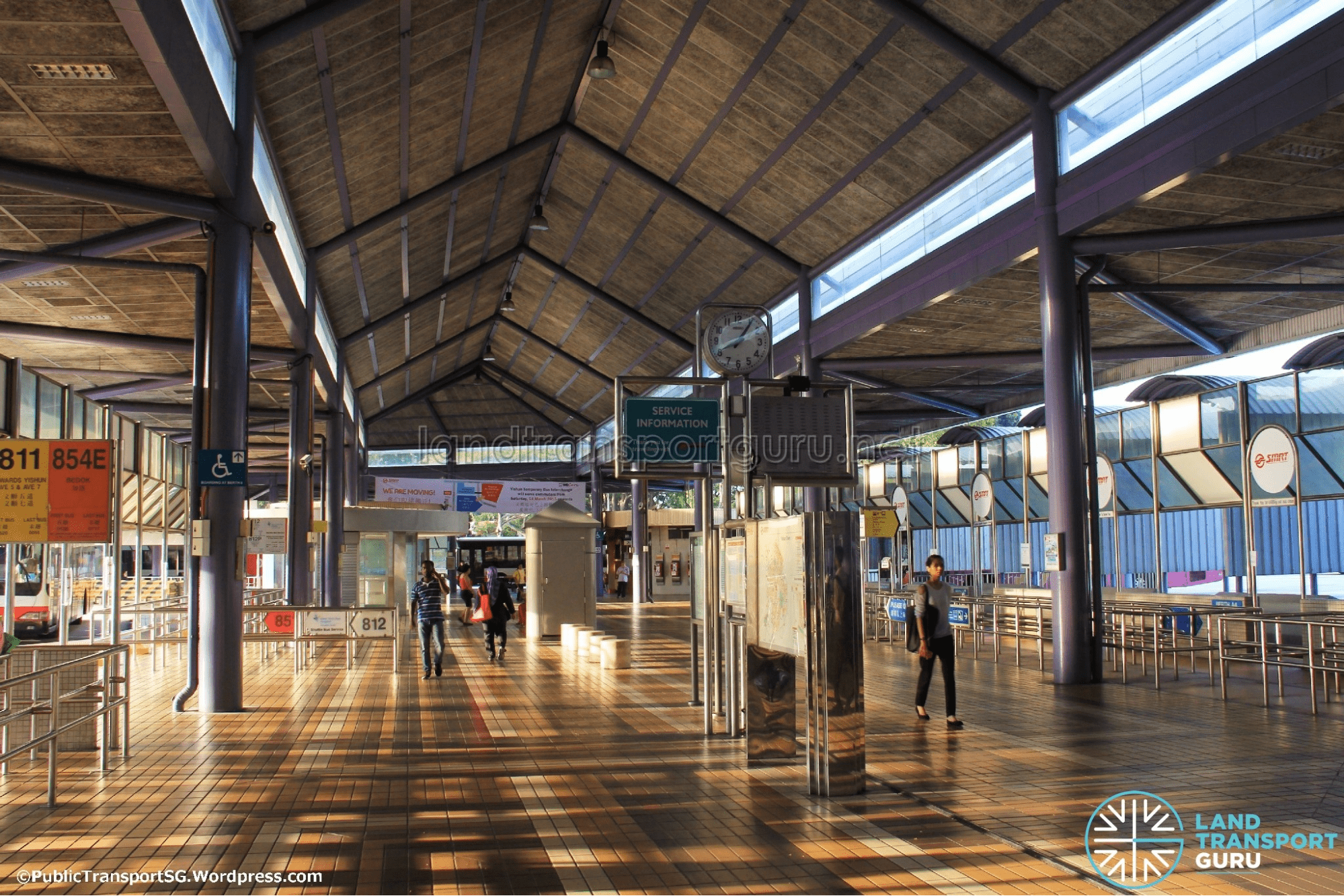 Here’s a major history breakdown: the Yishun Bus Interchange was constructed in 1987 as Singapore’s first ever dedicated interchange for Trans-Island Bus Service, now known as SMRT Buses. Cue nostalgia-inducing imagery of olden-day buses where you had to crank open the windows for fresh air, and ticket-dispensers were the norm instead of EZ-Link tapping machines. 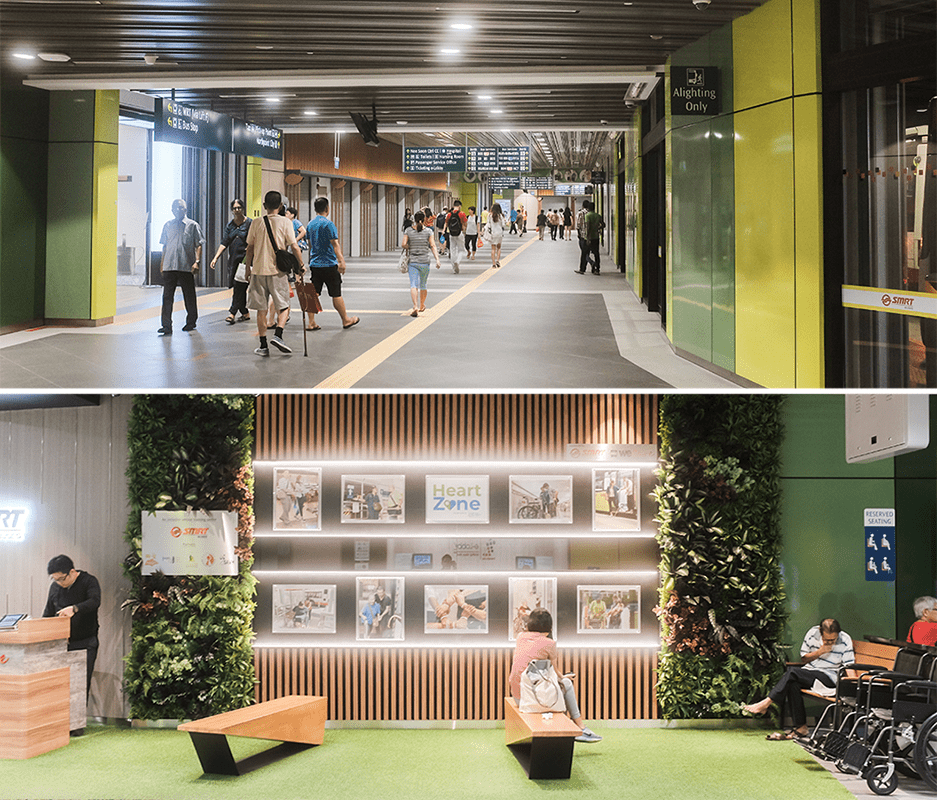 Following the interchange’s 2015 closure, a temporary one was set up behind Northpoint Shopping Centre before Yishun Integrated Transport Hub opened its doors in late 2019. Home to over 30 bus services which you can wait for in air-conditioned comfort, commuters can also fuel up at the canteen or juice up their devices at the SMRT WeCare Charging Stations. 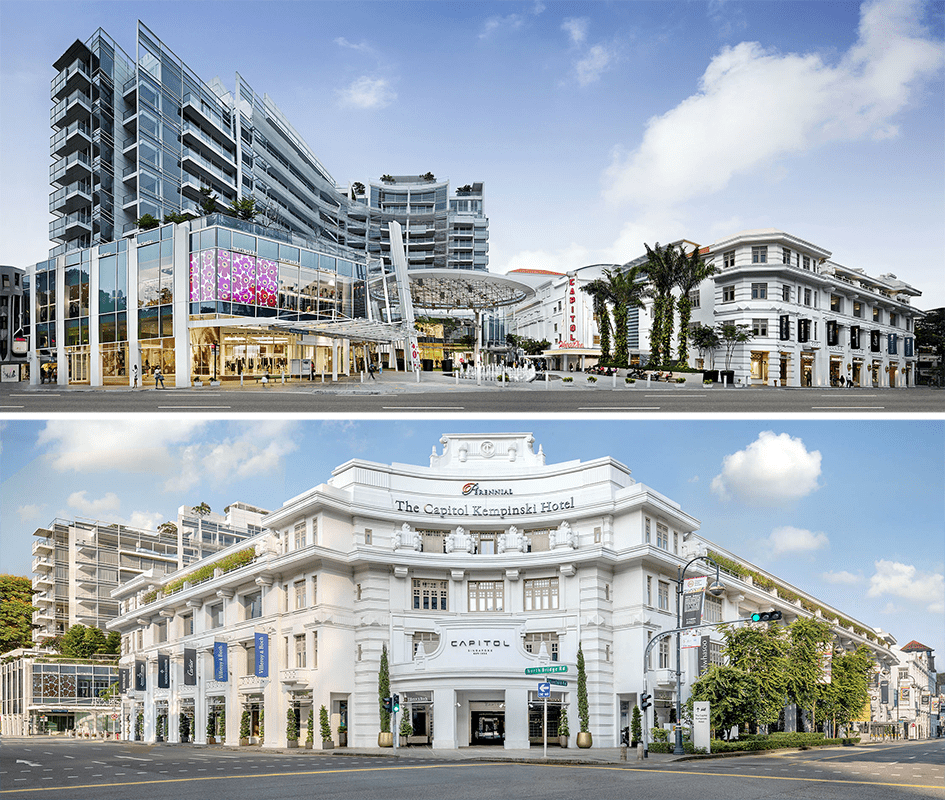 Strolling from City Hall to Funan means catching glimpses of Capitol Piazza’s retro-chic facade, evoking a sense of old-school nostalgia which makes us want to sip on a milkshake in a 50s-style diner. 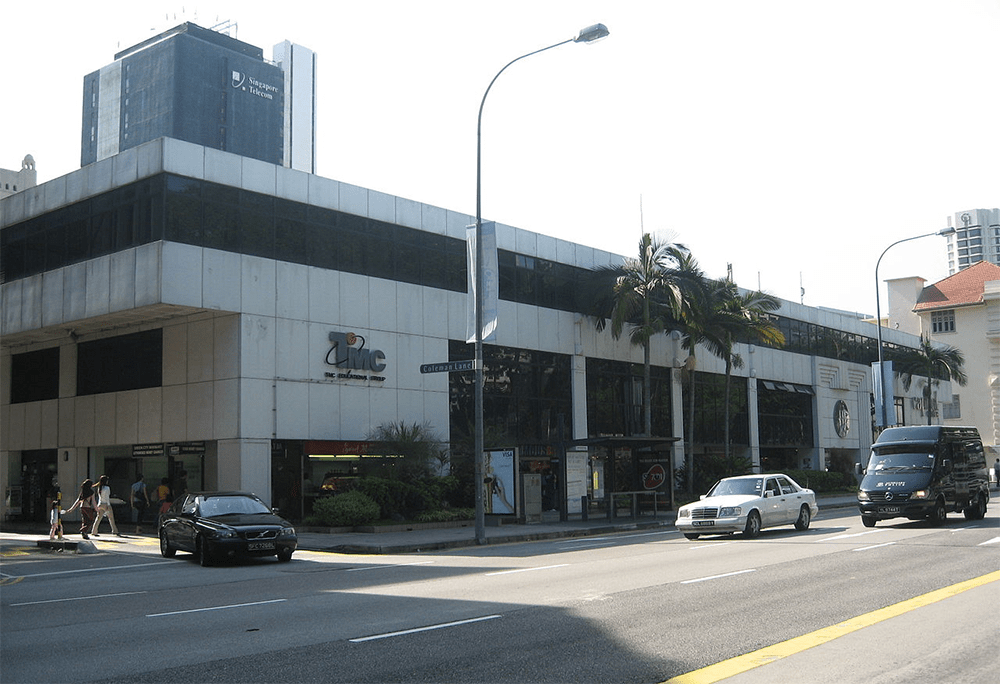 Part of the space started out as Capitol Centre, first established all the way back in 1976 as a temporary resettlement centre before changing up once every couple of years to become a parking station (1985), design centre (1992) and retail space (1995) at various points in time. Whew, talk about going through major changes and different phases as part of your evolution!

Continuing with the one-stop-shop concept, the area is now a swanky cluster combining F&B establishments, hangout spots and a hotel – The Capitol Kempinski.

Progress and nation building made possible through taxes

Be it architectural wonders that put us on the world map or repurposing dead space to better serve various communities, these transformations go to show that we really practice the “Majulah Singapura” mantra – Onward, Singapore!

It’s astonishing that a Little Red Dot can be home to so many architectural wonders. So the next time you’re out and about, have a look around our concrete jungle and see if you can spot any differences before and after certain buildings’ extreme makeovers.

Check out these other articles about iconic buildings in Singapore: 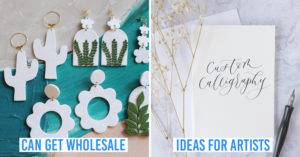 7 Ways To Start A Side Hustle In Singapore If You’ve Always Wanted To Be An Artist Or Entrepreneur
The Live Turtle & Tortoise Museum: Biggest Turtle Collection In The World Where You Can... 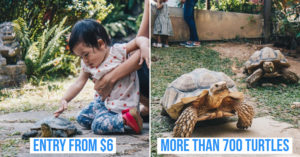