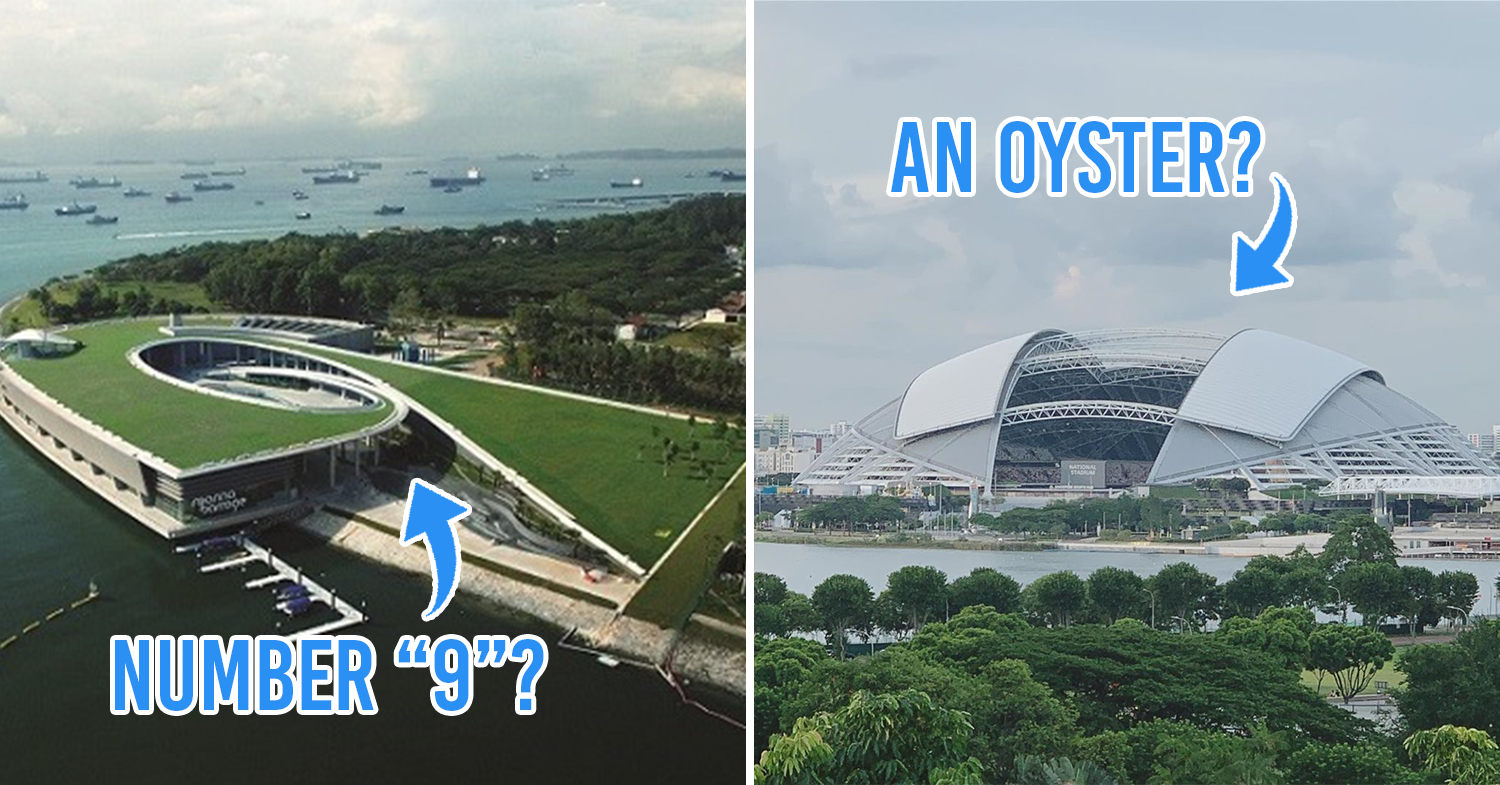 We might not all believe in the magical power of feng shui but with so many of Singapore’s iconic buildings designed and decorated to specifically draw in wealth and positive energy, the proof is in the pudding.

From shopping malls decked out in auspicious 8s raking up profits in the millions to stadiums built to receive blessings from the heavens, here’s a list of 12 feng shui-zhnged places in Singapore. 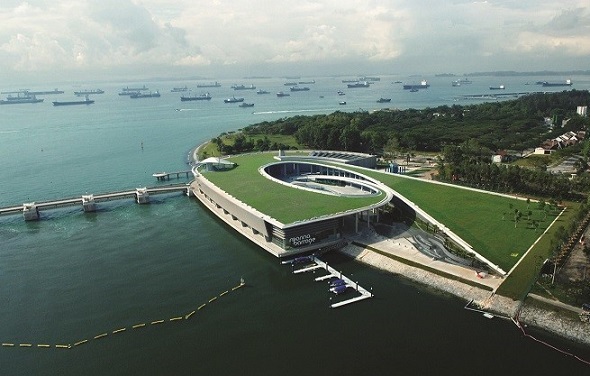 We frequent the lawns of Marina Barrage for chill outdoor activities like picnicking, kite-flying or to chase panoramic sunsets. Unless you’re looking at Marina Barrage from an aerial view, you won’t notice how the lawn oddly resembles a number “9”. While it could have just been an aesthetically-charged decision, here’s the embedded feng shui significance. 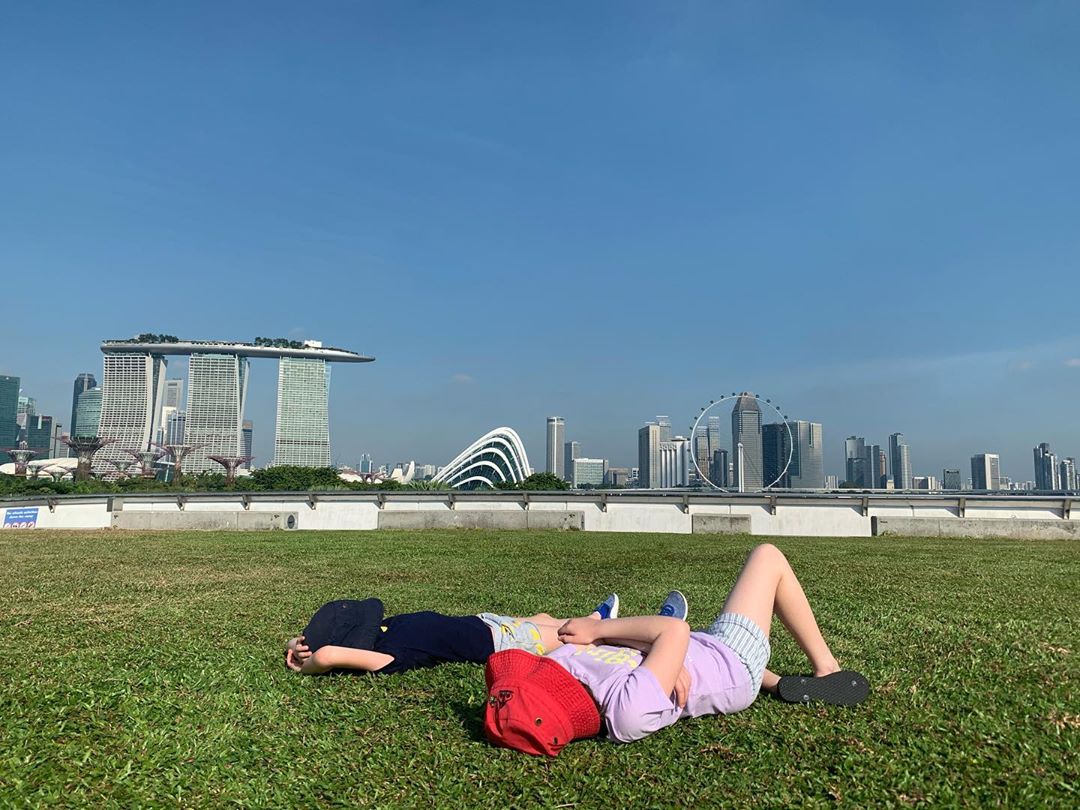 Another feng shui interpretation sees the Marina Barrage as a plug to the Marina Bay basin which prevents the rivers or “twin dragons” from heading to the sea. This means that the good energy that the dragons bring can’t flow through the city.

And because the whole basin resembles the shape of a womb, the masters believe that this ultimately has adverse effects on the fertility rates of the nation. 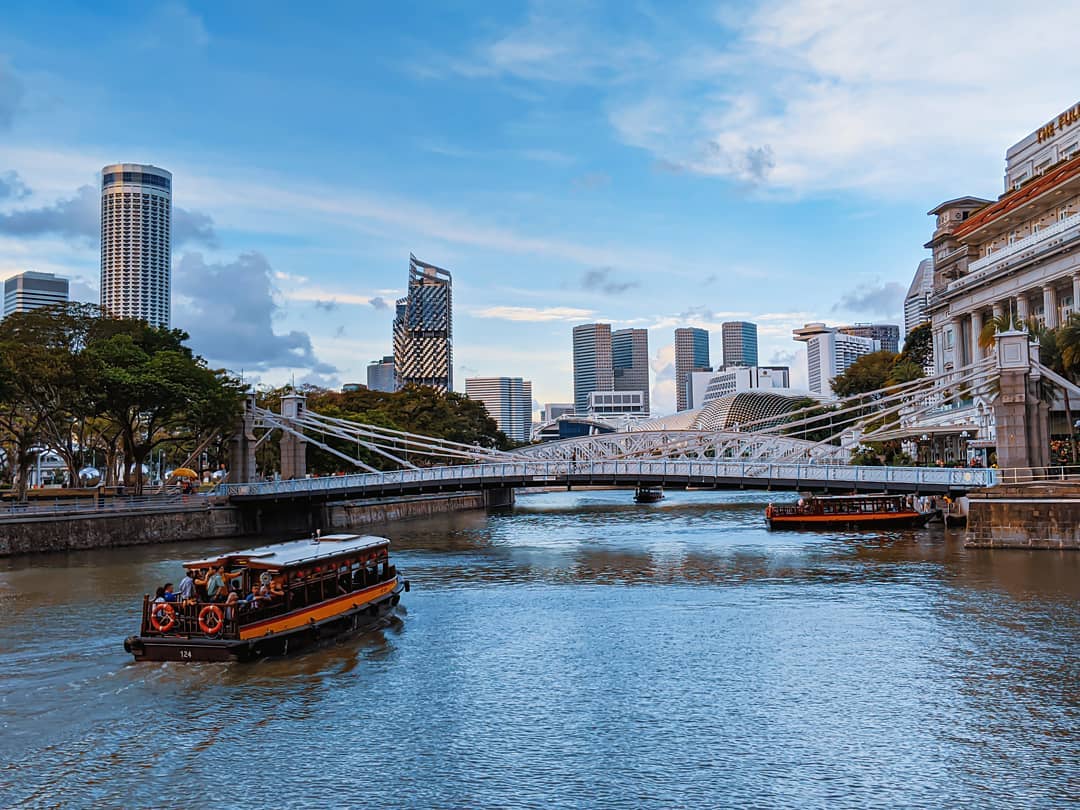 A dragon gate formation or dragon gates are symbolised by two tall structures flanking a dip in the middle
Image credit: @fennestofreeman

At the mouth of the Singapore River rests the Cavenagh Bridge – Singapore’s oldest bridge that is now only open to pedestrians. Looking at the map, you’ll realise that the river leading up to this bridge from Clarke Quay is shaped like a carp. And the only way out for the carp is to jump over the bridge, which according to feng shui is fixed in a dragon gate formation.

With the carp representing vitality and swimming upstream to beat adversity, it will transform into a Chinese dragon upon jumping over this supposed dragon gate. This helps to multiply the prosperity of the area. 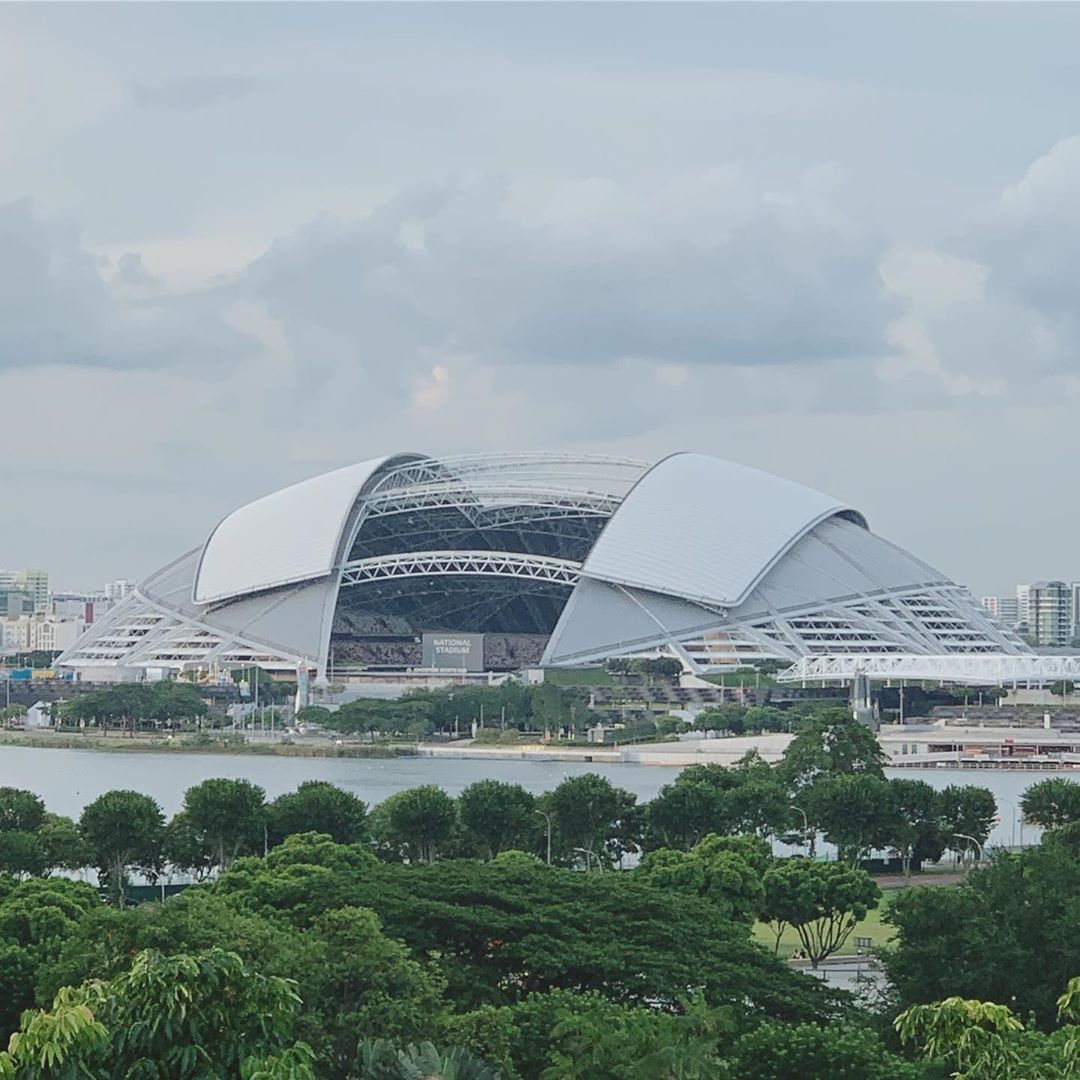 Despite having a small talent pool, Singapore has managed to clinch a collection of medals to gain recognition in the international sports scene. This may or may not have been the result of renovating the Singapore Sports Hub into an oyster-like form where the retractable roofs open up and reveal a “pearl” or in this case, Singapore’s sports scene. 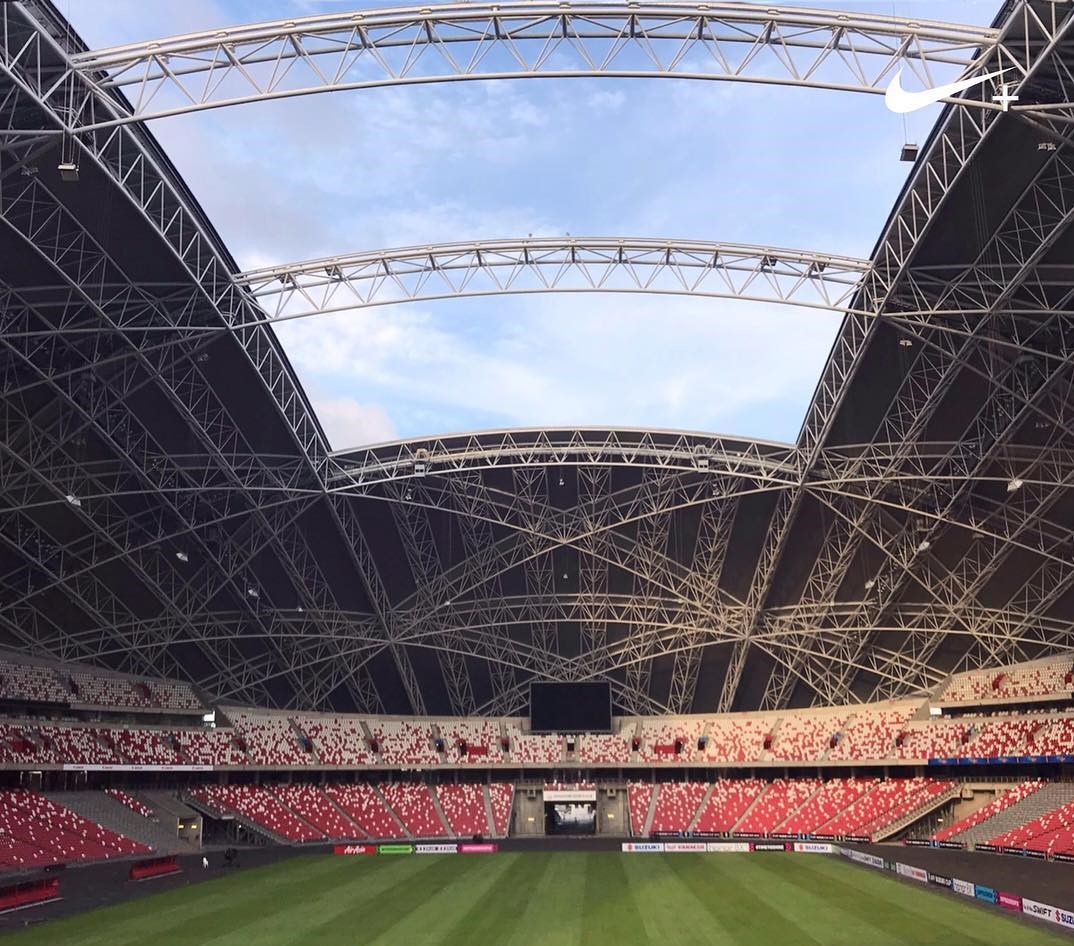 Because of how it opens up to face the sky, it’s also believed to be in a good position to receive positive energy from the heavens to bless our sports industry.

4. ArtScience Museum – the shape of two palms receiving positive energy from the heavens 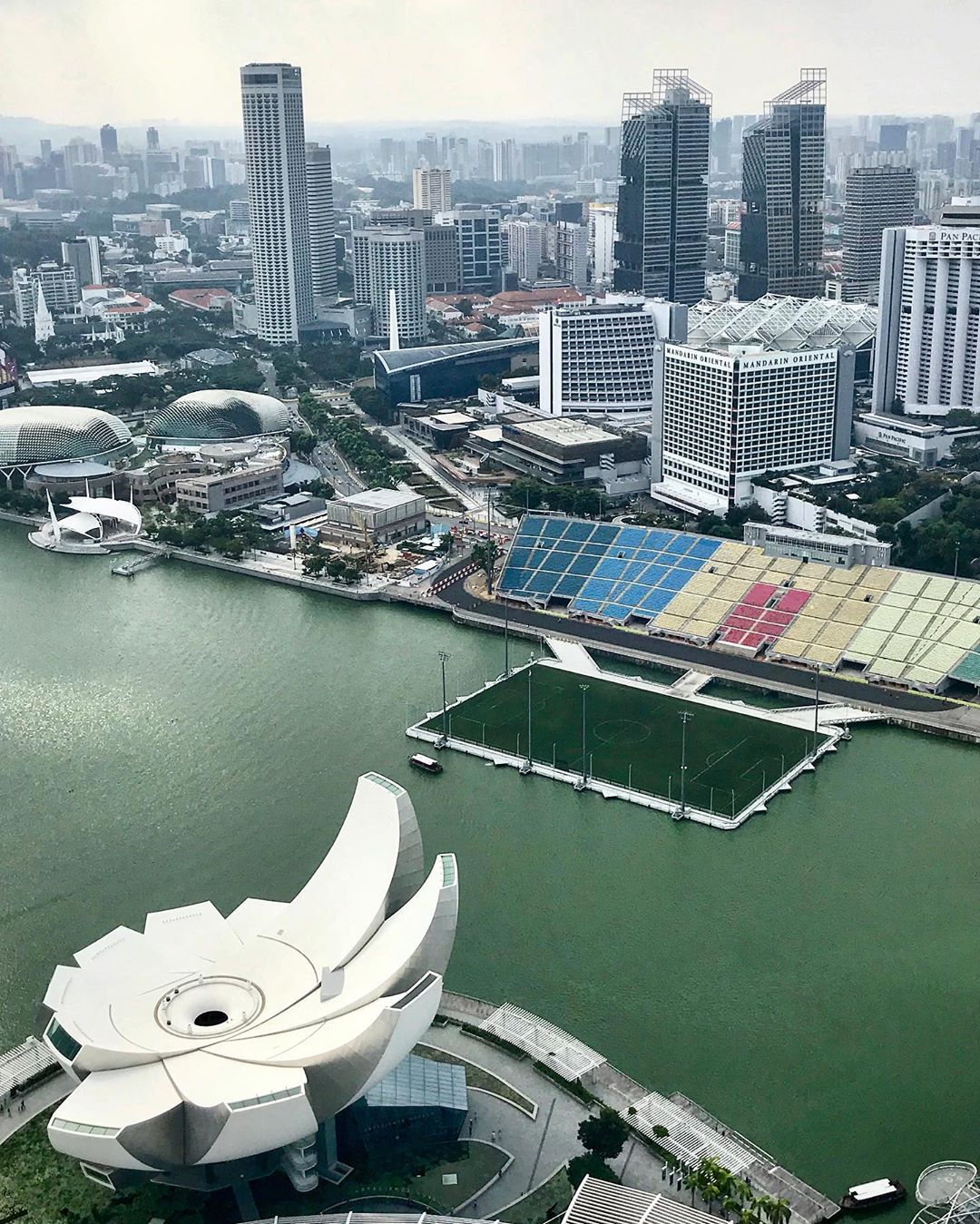 The ArtScience Museum is unlike any other. Not only because it involves a crossover between art, science, and technology, but also because of its “welcoming hand structure”. When you look at it from afar, you’ll be able to see the resemblance of 2 hands cupped together facing upwards.

Here, it is believed that such a formation is ideal to welcome positive feng shui energy from the sky. 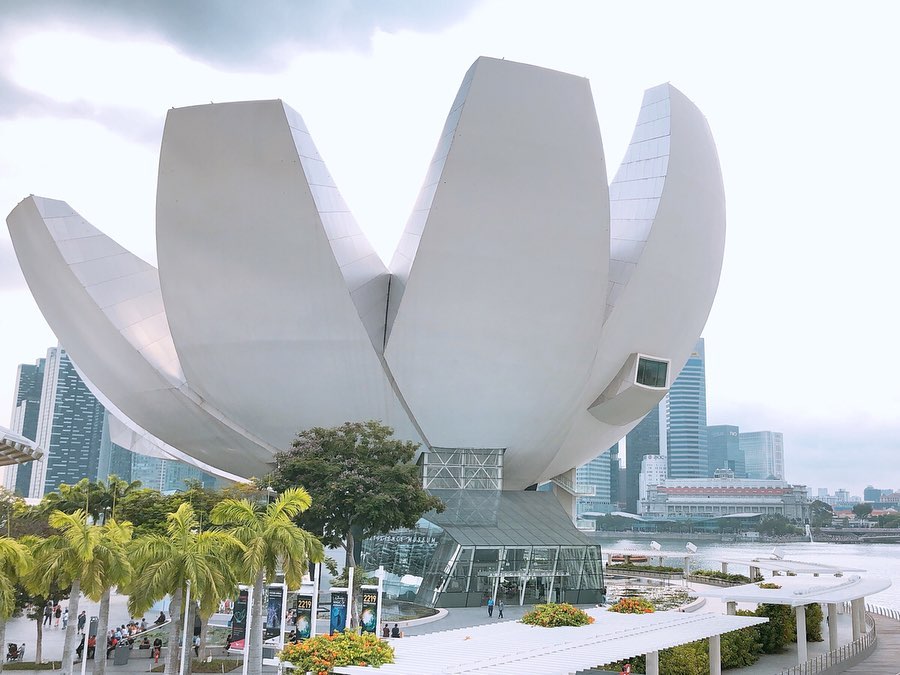 Others say the ArtScience museum resembles a lotus – a symbol of prosperity. Either way, whether or not there’s a tangible effect, we can’t deny that the museum has been receiving success despite the pricier admission tickets. 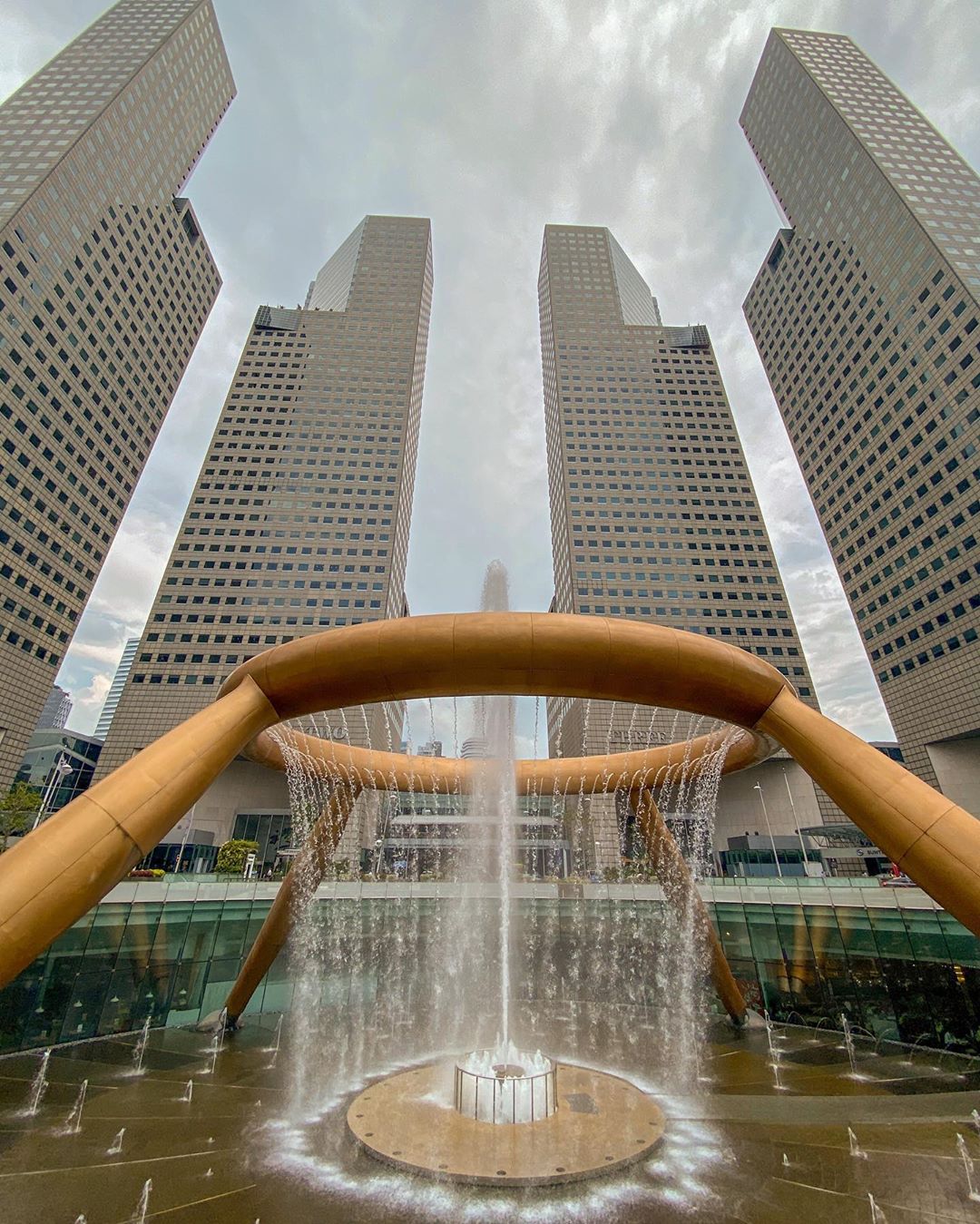 The towers were designed to look like a left hand to represent men who dominated the business and finance industry. That’s why Tower 5 is shorter than the rest.
Image credit: @ndra_draven

A similar architectural structure depicting an open palm can be seen from Suntec City’s facade. The 5 towers together look like a left palm pointing up to the sky and form a straight line with Shenton Way. Applying the same concept of feng shui, Suntec City is receiving positive energy from both the heavens and the CBD area.

6. Duo Tower – concave towers to ease in positive energy from the surrounding 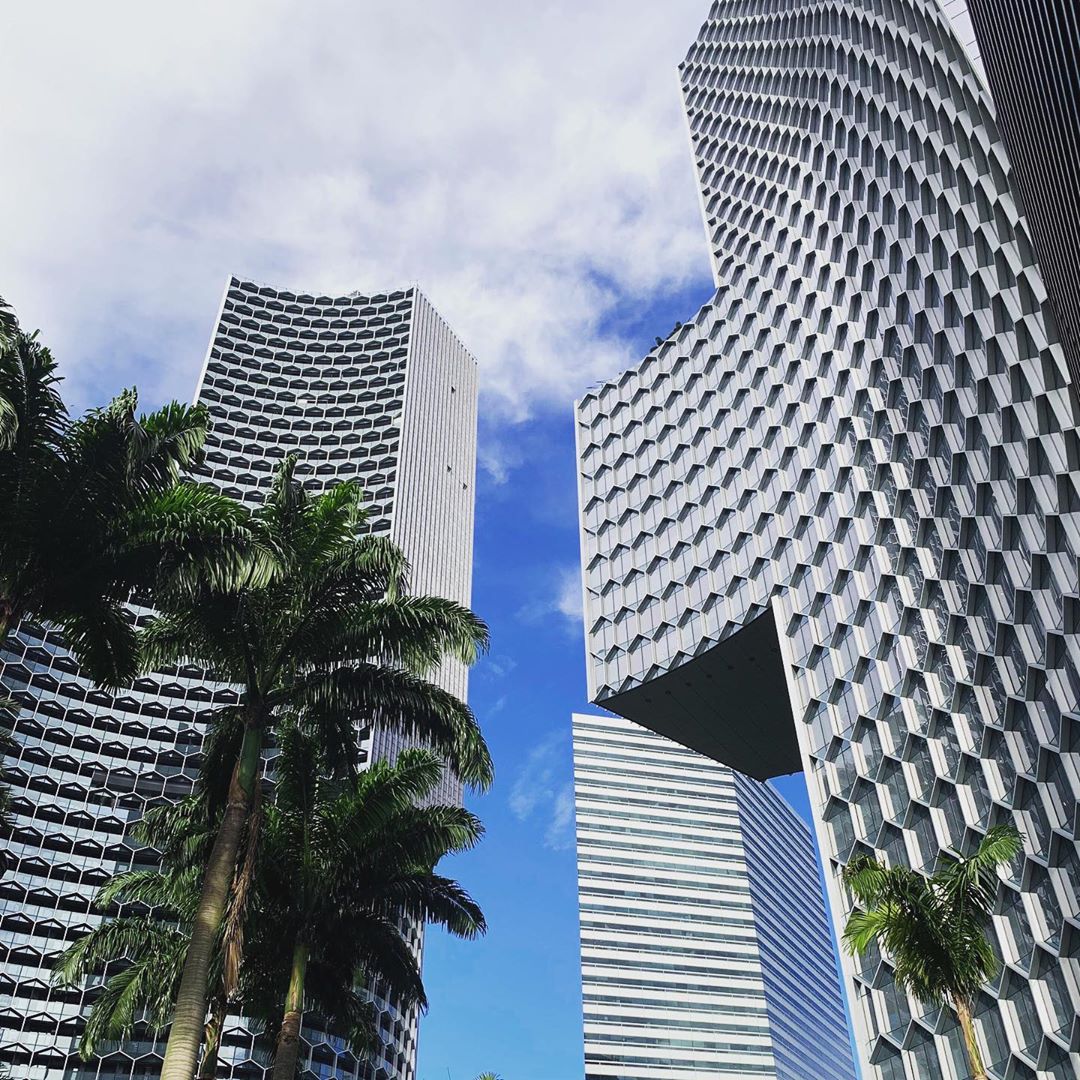 A relatively new addition to the Bugis area is Duo Tower. You won’t find 2 regular towers standing side-by-side here. Instead, you’ll notice more curves than sharp edges and that the 2 buildings bend in a concave manner to meet each other.

This ensures that they’re not negatively affected by the strong energy from the neighbouring Parkview Square and The Gateway, while still welcoming the energy to flow smoothly into the compound. 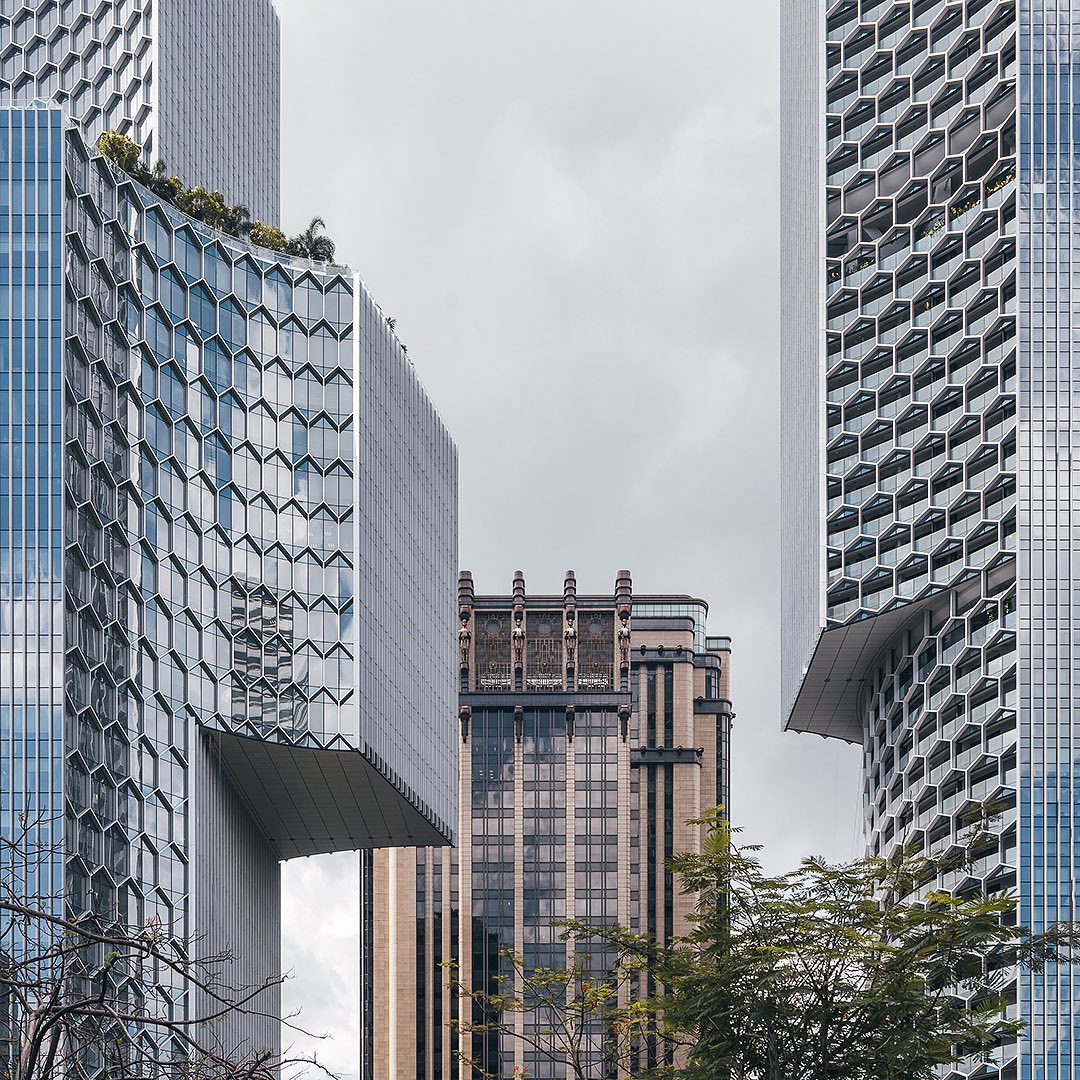 Instead of blocking the feng shui from Parkview Square, there is space for it to flow through the land.
Image credit: @studiosz_photo

Another feng shui consideration was to make Duo Tower the “pearl” in the “twin dragons holding up a pearl” formation from Beach Road. In this case, Duo Tower’s architecture deliberately takes into account the preexisting feng shui in the area and consequently, incorporates features that’ll protect their land while multiplying the positive energy.

7. The Interlace – marriage of Eastern and Western geomancy 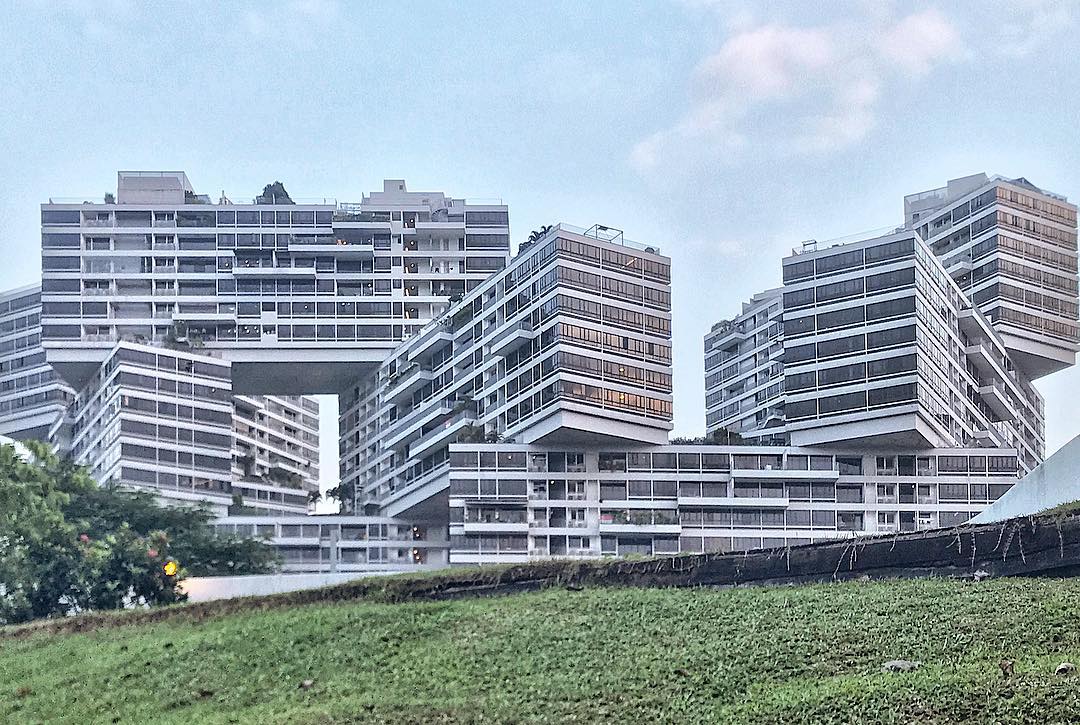 It’s hard to miss The Interlace with its unique Lego-like building block concept nestled at the junction of Alexandra Road and Ayer Rajah Expressway. Here, 31 residential blocks meet in a hexagonal design to make 8 different gardens within the grounds. The number 6 is auspicious in Western geomancy while the lucky 8 is rooted in Chinese feng shui. Some masters think that this crossover between the East and the West is the perfect combo to awaken all the lucky stars. 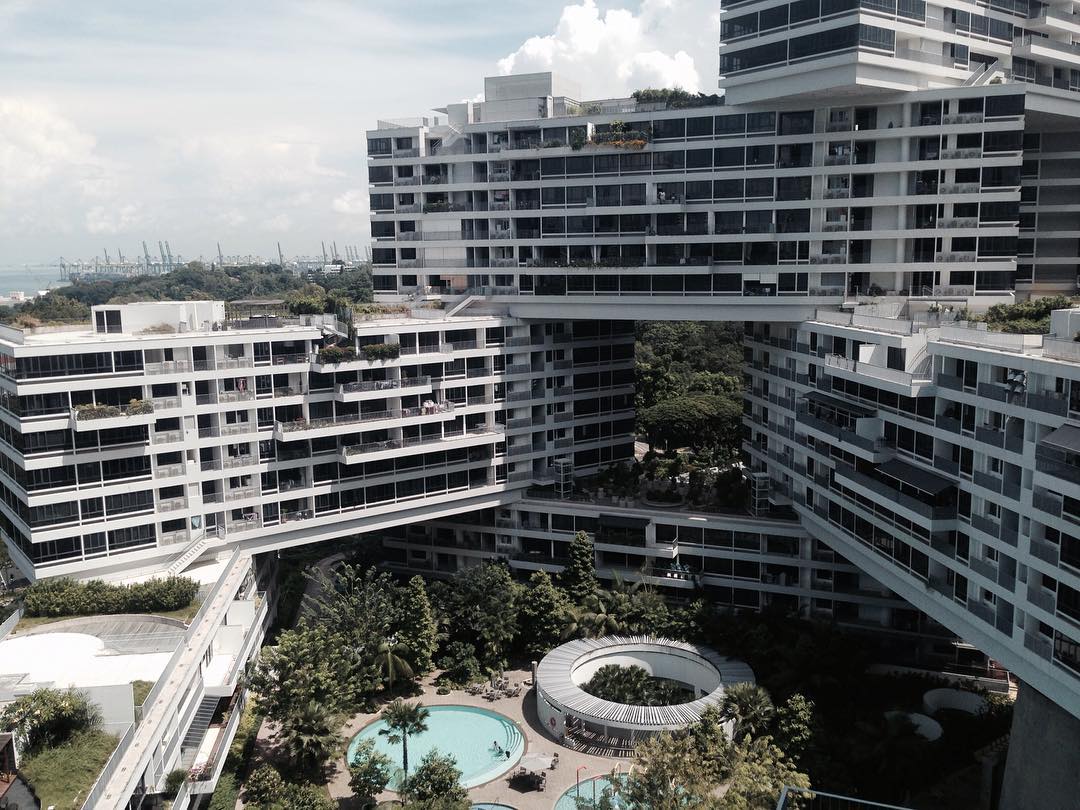 In terms of location, The Interlace is facing the sea for wealth while back-facing Mount Faber for support. This creates the ideal combo to get rich without major hurdles. The fact that this residential area also incorporates nature into every nook of the compound, it displays the essence of feng shui and that is the blending of people and nature into one. 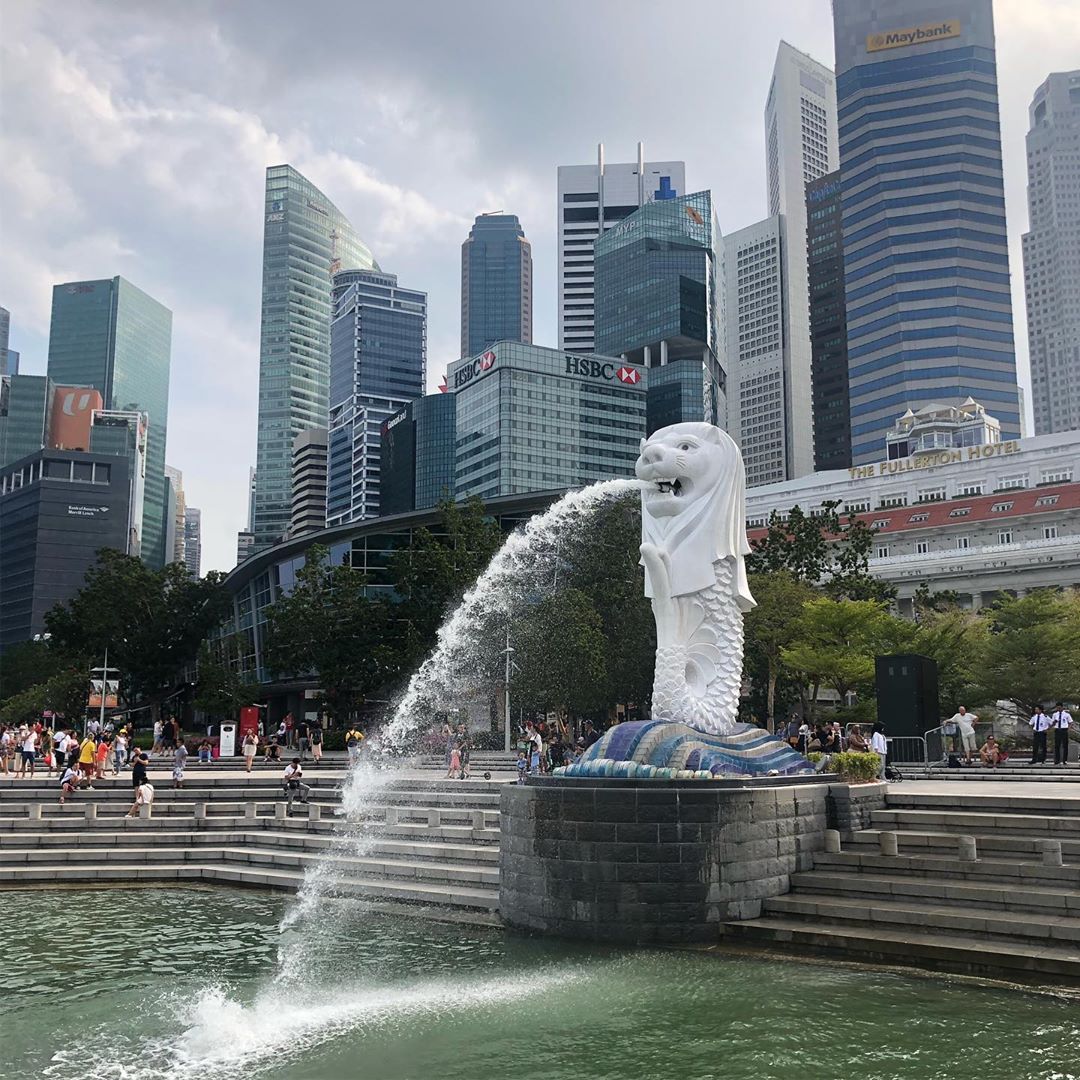 For a good 47 years now, the Merlion has been diligently spurting water into the Singapore River. While this unique statue makes an iconic tourist spot, its initial placement at the mouth of the Singapore River had a bigger role than just being an attraction. Its duty was to ensure that there was a constant movement of water and hence in feng shui terms, a continuous flow of good fortune into the country. 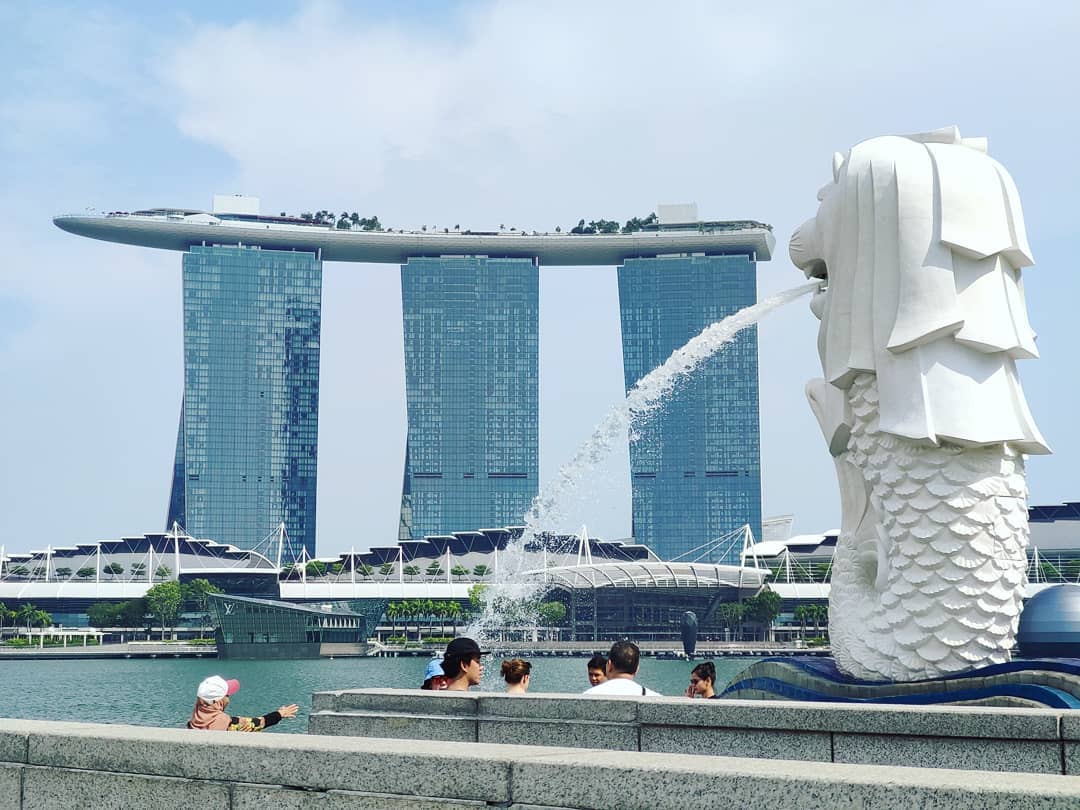 While it may not stand guard at the entrance of the Singapore River anymore, the current position is still backed by feng shui. The Merlion has been carefully aligned to face the East – a direction believed to be most auspicious.

9. Singapore Flyer – changed direction to bring fortune and prosperity to the city 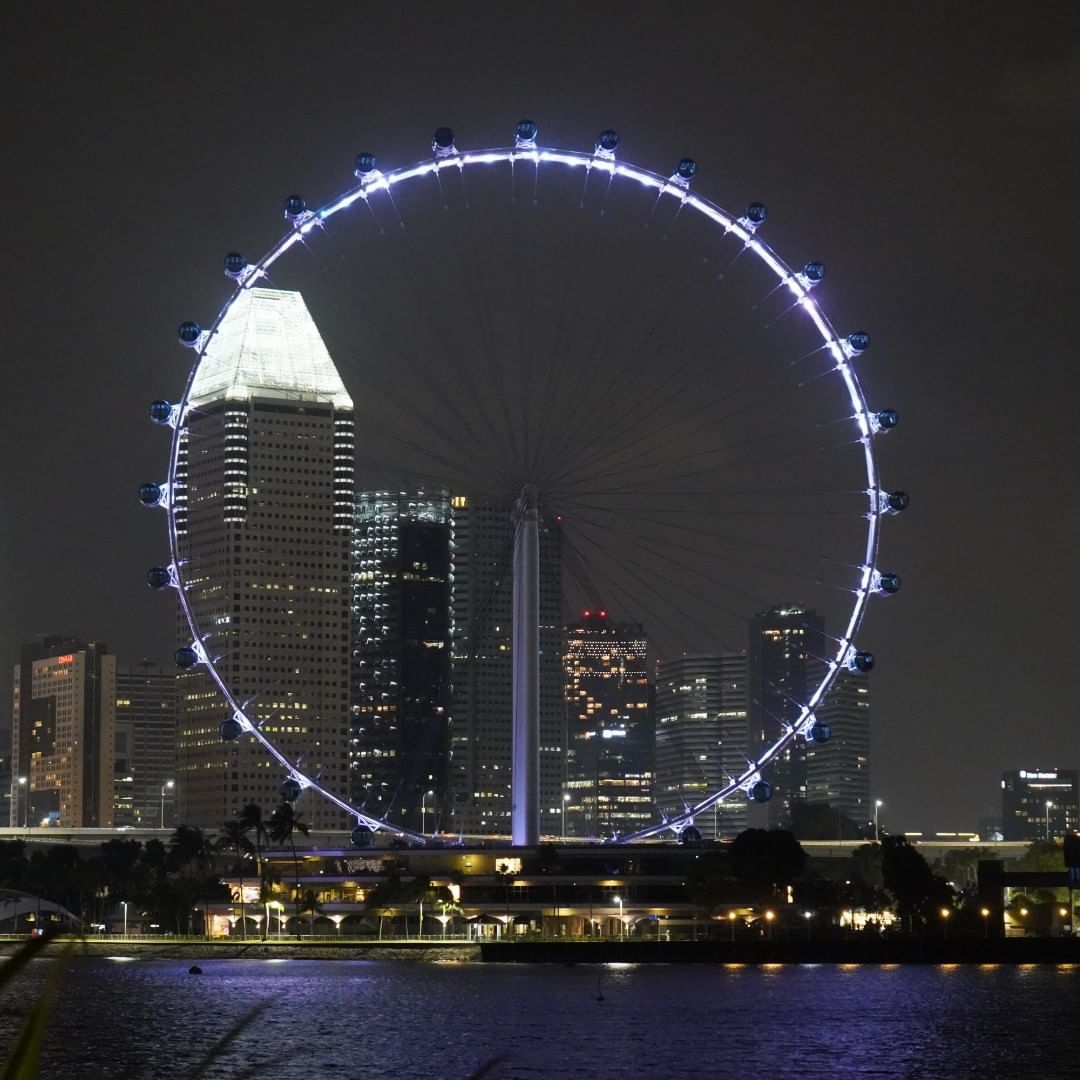 With 28 capsules being able to fit exactly 28 passengers, the Singapore Flyer easily took the spotlight for Singapore’s skyline in its initial years. The figures 2 and 8 were chosen deliberately to conjure the huat of Chinese culture. 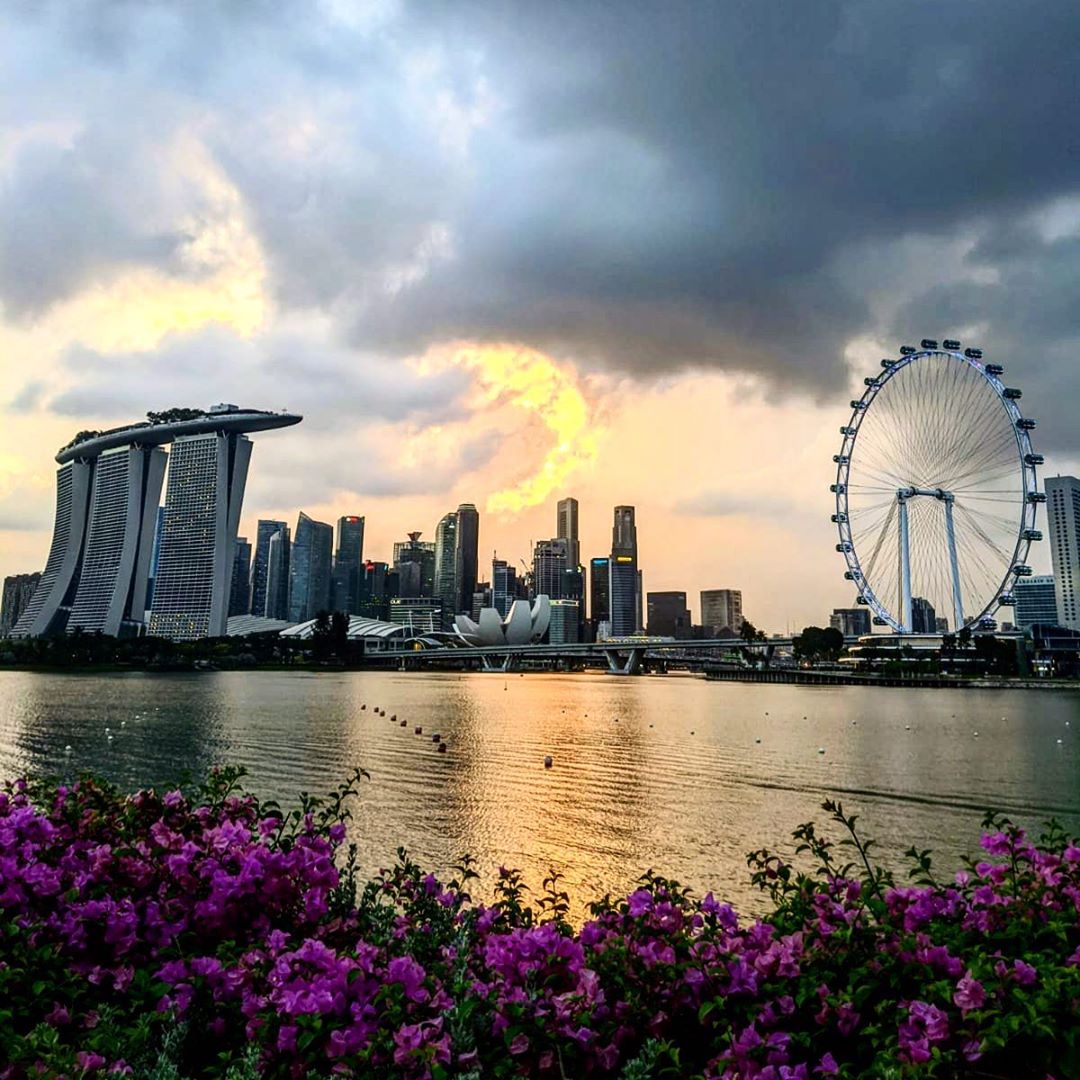 But upon its decline in popularity amongst locals, a feng shui expert advised the change in direction so as to revitalise the area and bring good fortune to the rest of the city. So the next time you see the Singapore Flyer, take notice of how it now turns inwards towards the city rather than its initial counter-clockwise direction. 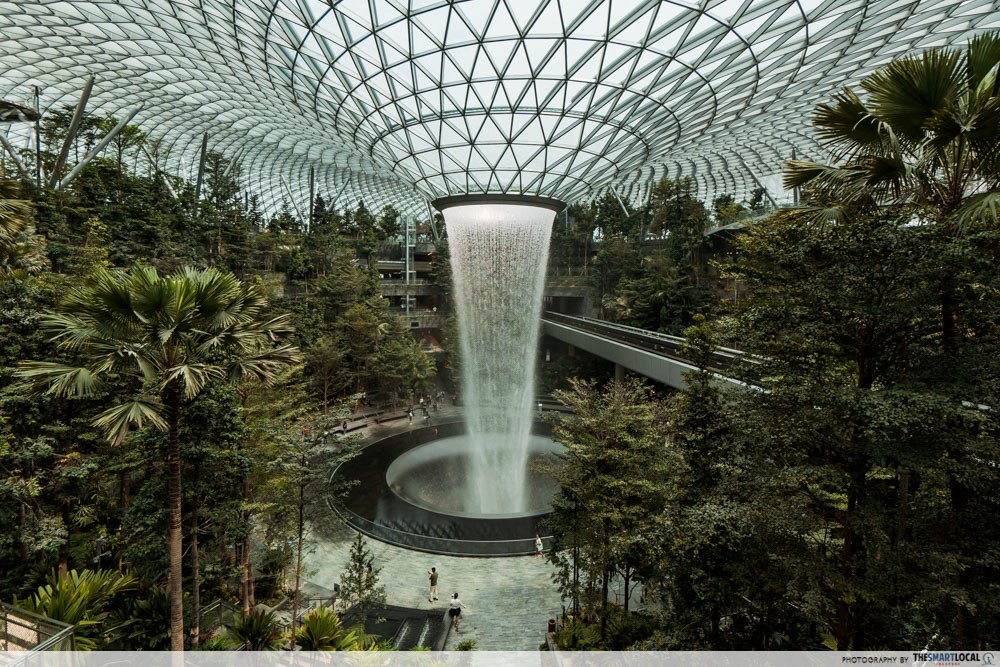 Fun fact: the rain vortex is slightly off-centre because it was built around the existing sky train tracks – no feng shui here!

Jewel Changi Airport may have officially opened months back but it’s still the talk of the town and not without reason. Its massive Rain Vortex is the world’s largest and tallest indoor waterfall, and every corner of this building is sprawled with lush greenery. Water plus earth and wood – that’s already 3 feng shui elements that have been woven into its design. 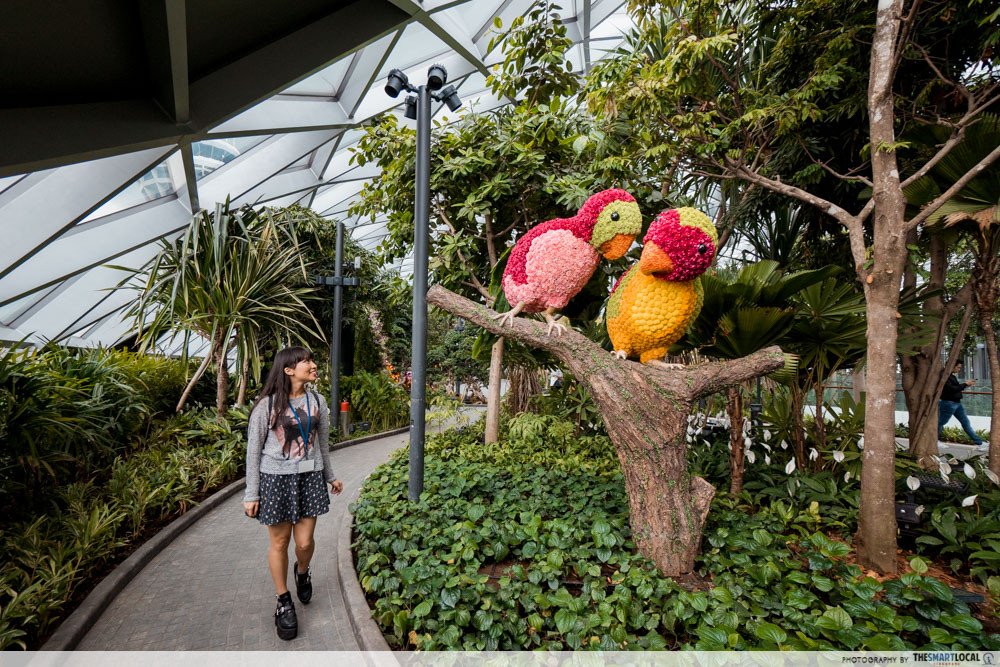 The metal element is everywhere from the beams and railings to the white and grey colour theme. And the natural light that seeps in makes up an important part of the fire element. Having ticked off all 5 elements in 1 building allows balance and stability for good fortune to circulate this space.

Read our other Jewel articles here: 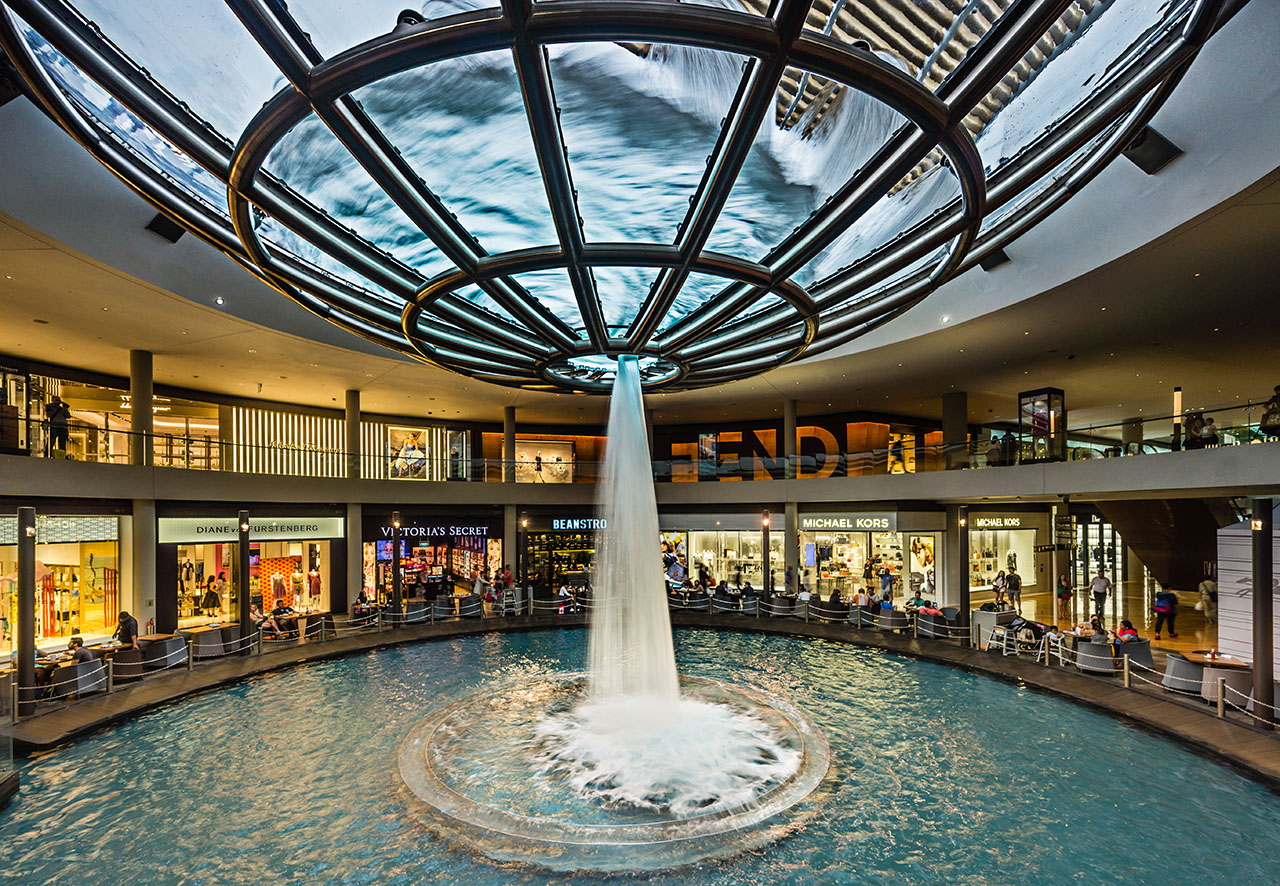 The predecessor of Jewel’s Rain Vortex: Marina Bay Sands’ rain oculus. It’s not as massive but having a constant flow of water into the shopping complex indicates a steady flow of money. Maybe that’s why it’s hard to leave the mall empty-handed. 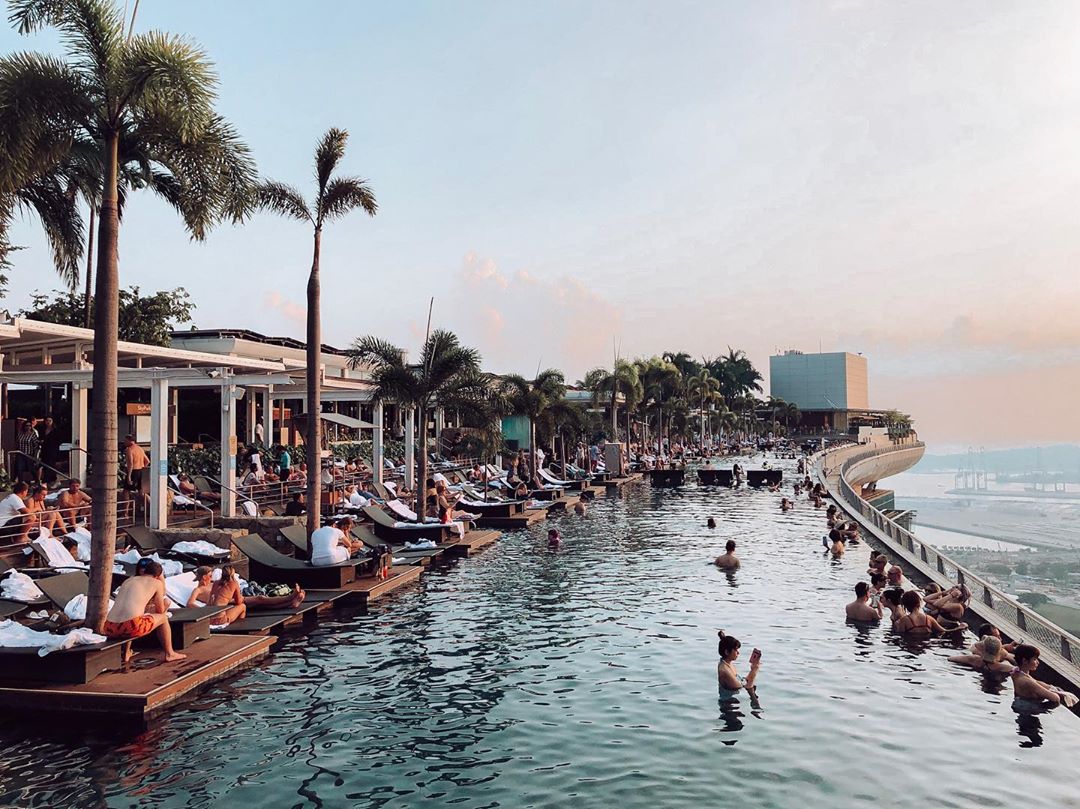 Interestingly, in the perspective of feng shui, the all-time favourite photo spot in Marina Bay Sands, the Infinity Pool, can also be seen as a lake rested atop a giant mountain.

Besides water being the icon of wealth, having the seamless transition from the sight of the pool to the city highlights harmony with its surroundings. And the fact that it’s facing the country’s financial district? That’s extra points in the financial department. 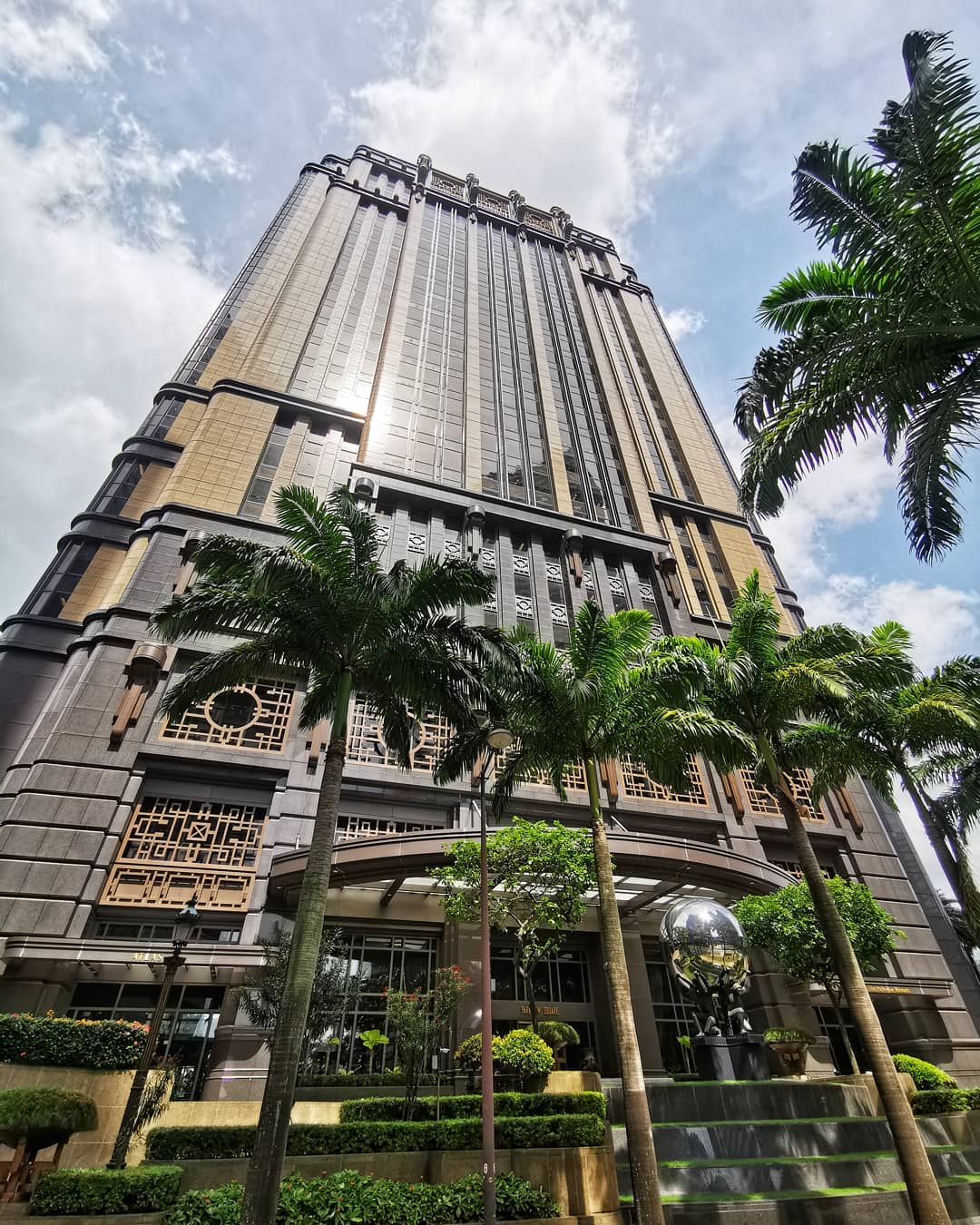 Walk along North Bridge Road and you might notice an ominous-looking building with sculptures of historical figures like Plato, Lincoln and Churchill adorning its exterior. Parkview Square or better known as Singapore’s very own Gotham Building is clad in feng shui elements despite its dark outlook. 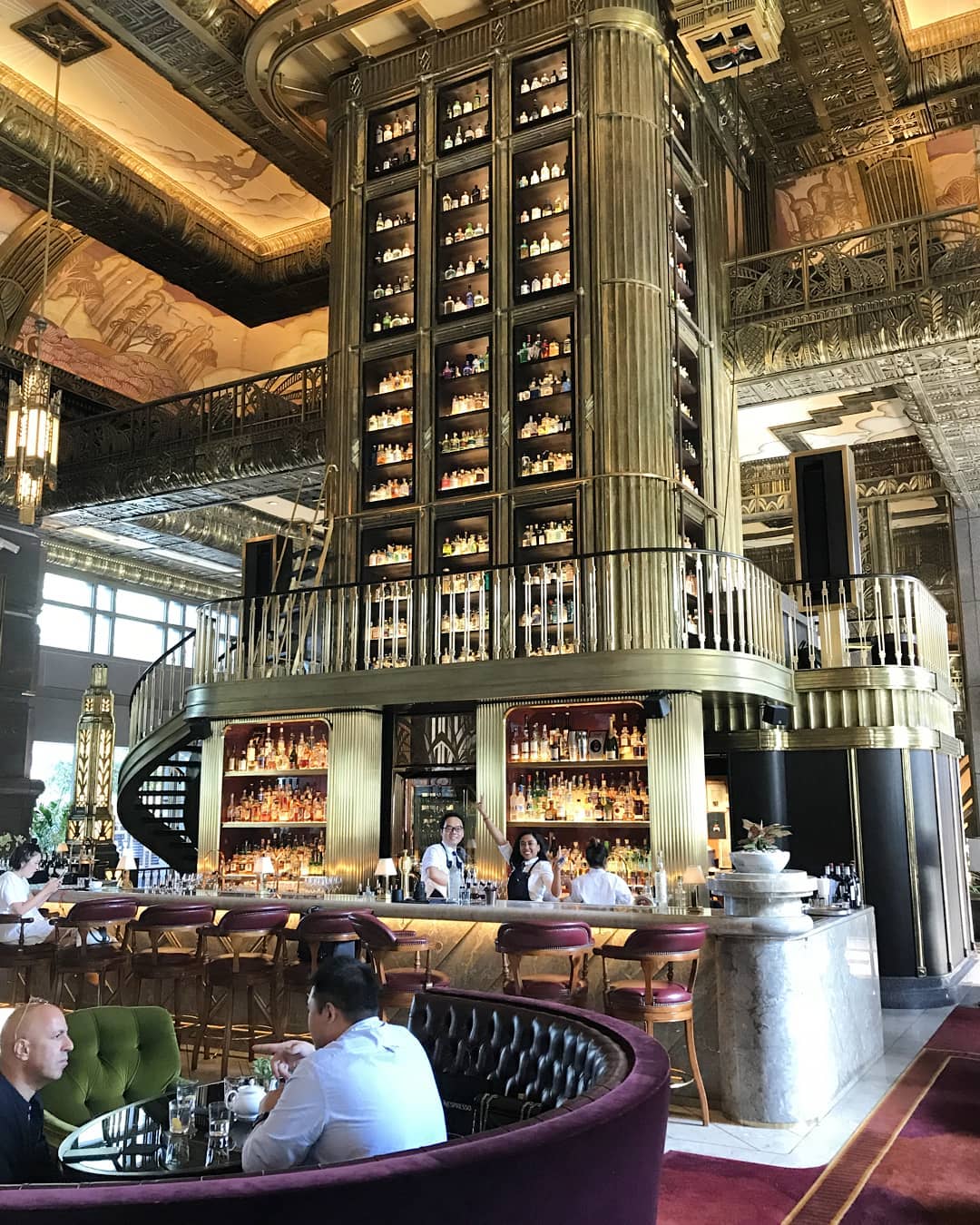 The interior is filled with round edges as well
Image credit: @jensonslog

In a bid to deflect the negative energy conjured from the sharp edges of The Gateway, Parkview Square is built with curved edges both inside and outside. The main entrance is at the back rather than at the front of the building and the fountain flows in reverse to lead wealth into the compound.

But the neighbouring energy isn’t all that bad – to build on the strong metal element already present in the area, Parkview Square is painted in a sandy tone to reflect the strongly compatible earth element.

Singapore’s known for her beautiful cityscape being made up of skyscrapers and unique architecture in buildings like the Esplanade or the Gardens By the Bay. But upon closer look, you’ll realise that we’re still strongly rooted in cultural beliefs and in this case, feng shui still plays an important role in the designing of our city.

The next time you admire a building or space in Singapore, try to see if you can spot any possible feng shui elements and make your deductions about them.

When you’re done counting your lucky stars, here are some other mysteries you can unlock: 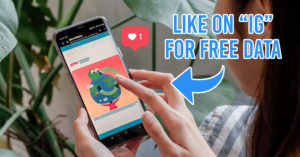 Singtel GOMO Is Giving You Up To 20GB Free Data With A Game That Tests Your Instagram "Liking" Skills
6 Bak Kwa Delivery Services In Singapore For CNY 2020 So You Don’t Have To... 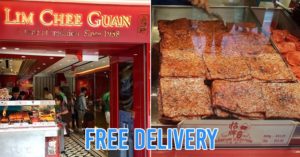