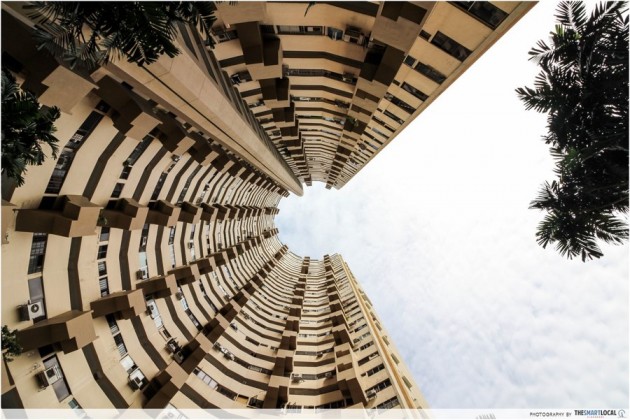 Singapore is known to be an urban jungle. After all, we’re an exceedingly small country, and are also one of the few places in the world whose population lives entirely in urban areas. But just because we are filled with concrete and steel doesn’t mean there’s no beauty to be found.

Hidden beneath acres of HDBs and skyscrapers lies immense grandeur – you just have to look. 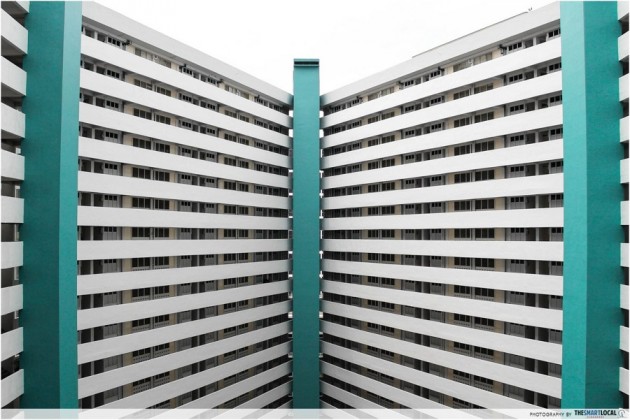 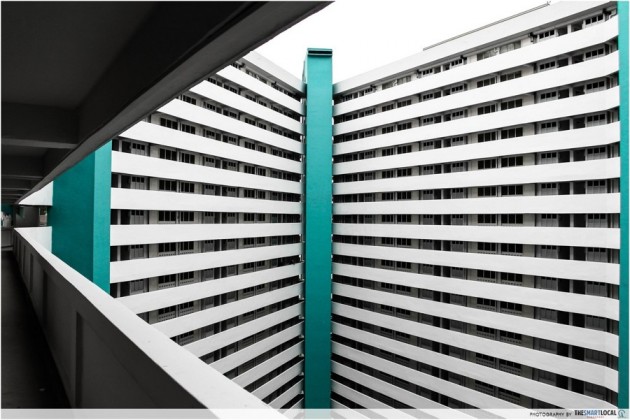 This unique diamond-shaped HDB, formed by four blocks (Blk 63-66) of 21 storeys each, has been sitting in Taman Jurong since the 1970s. Previously under the demolition plan, it has now become rental flats for lower-income families by the government, with a NTUC right at the first floor in between the blocks. 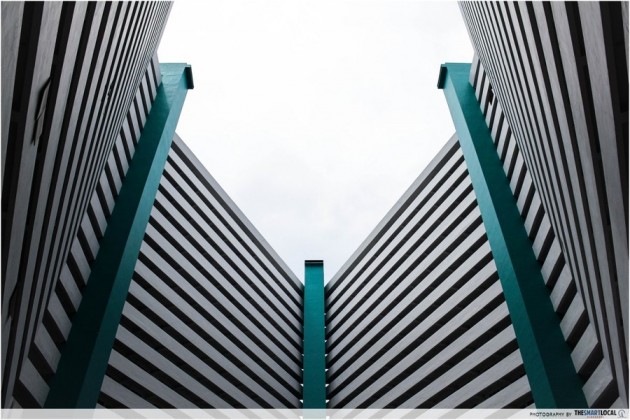 Directions: Alight at Lakeside MRT, board bus 240 from Opp Lakeside Station for 5 stops, and alight at Blk 103. 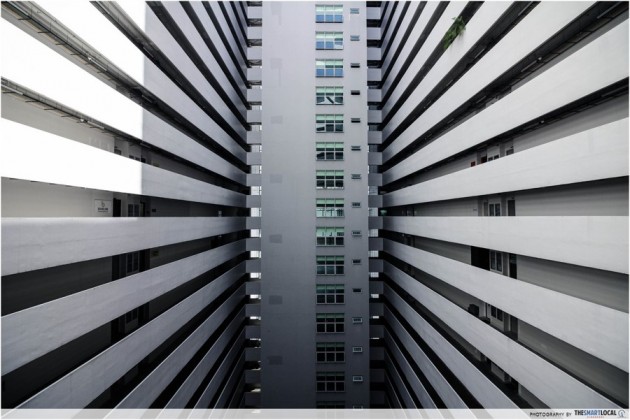 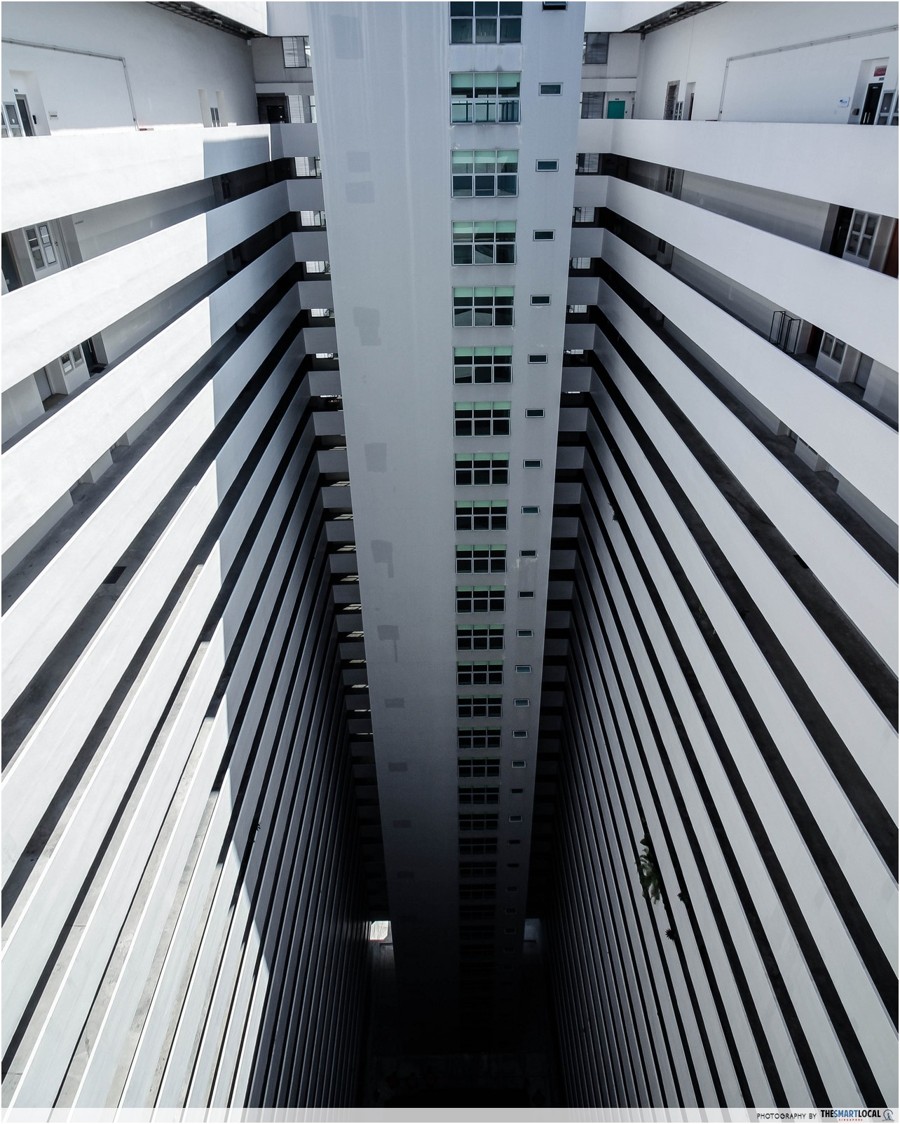 The WCEGA Tower is located at Bukit Batok, housing many offices on all of its 29 floors. The interior of the building provides a good photo spot for symmetry due to the identical design of every level.

Directions: Board bus 106 from Clementi MRT, and alight at Opp Burgundy Hill. 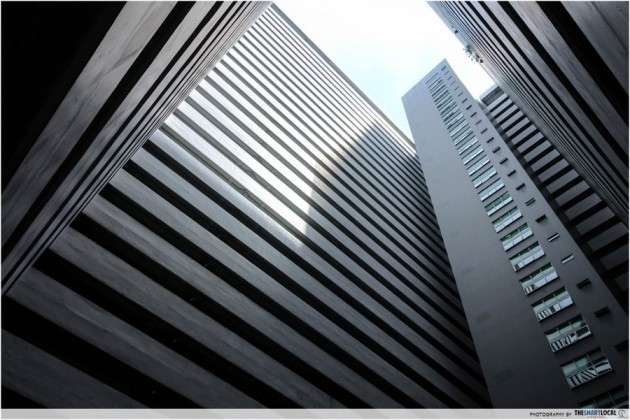 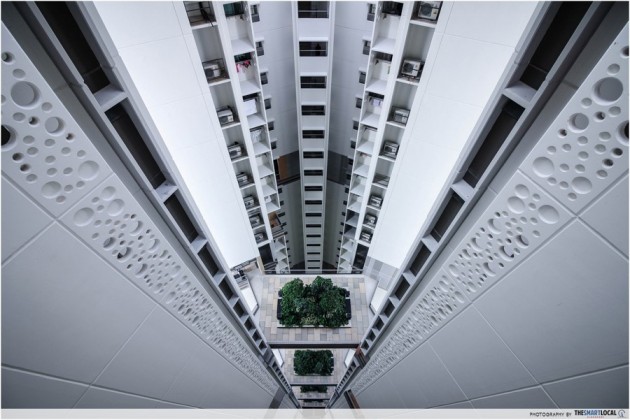 Built in 2015, this BTO project is only features not only some stunning architecture, but also sky gardens on Levels 14, 25, 36, and a roof garden on Level 47 overlooking the city. Clean lines and odd patterns juxtapose to create interesting contrast effects. 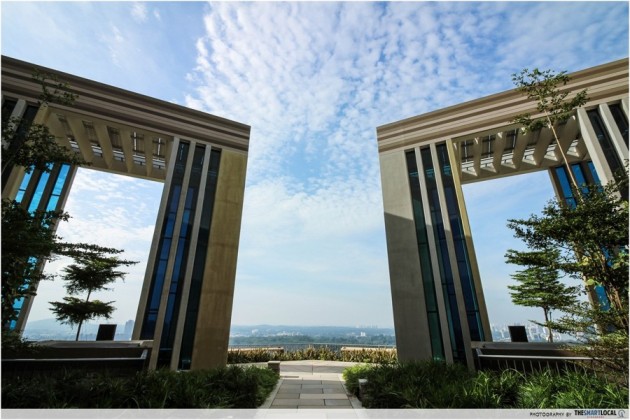 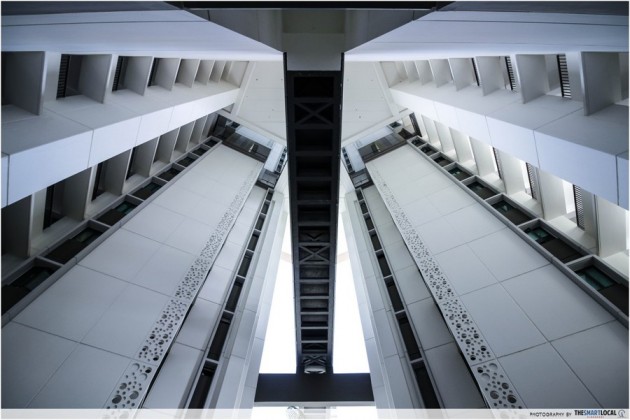 The private residential apartment built on Pearl’s Hill was once the tallest residential building in Singapore when it was completed in June 1976, standing at 113m tall. The effect of the split level architectural approach in the spatial planning was considered an important facet of the building, standing out from surrounding structures with its cylindrical design. 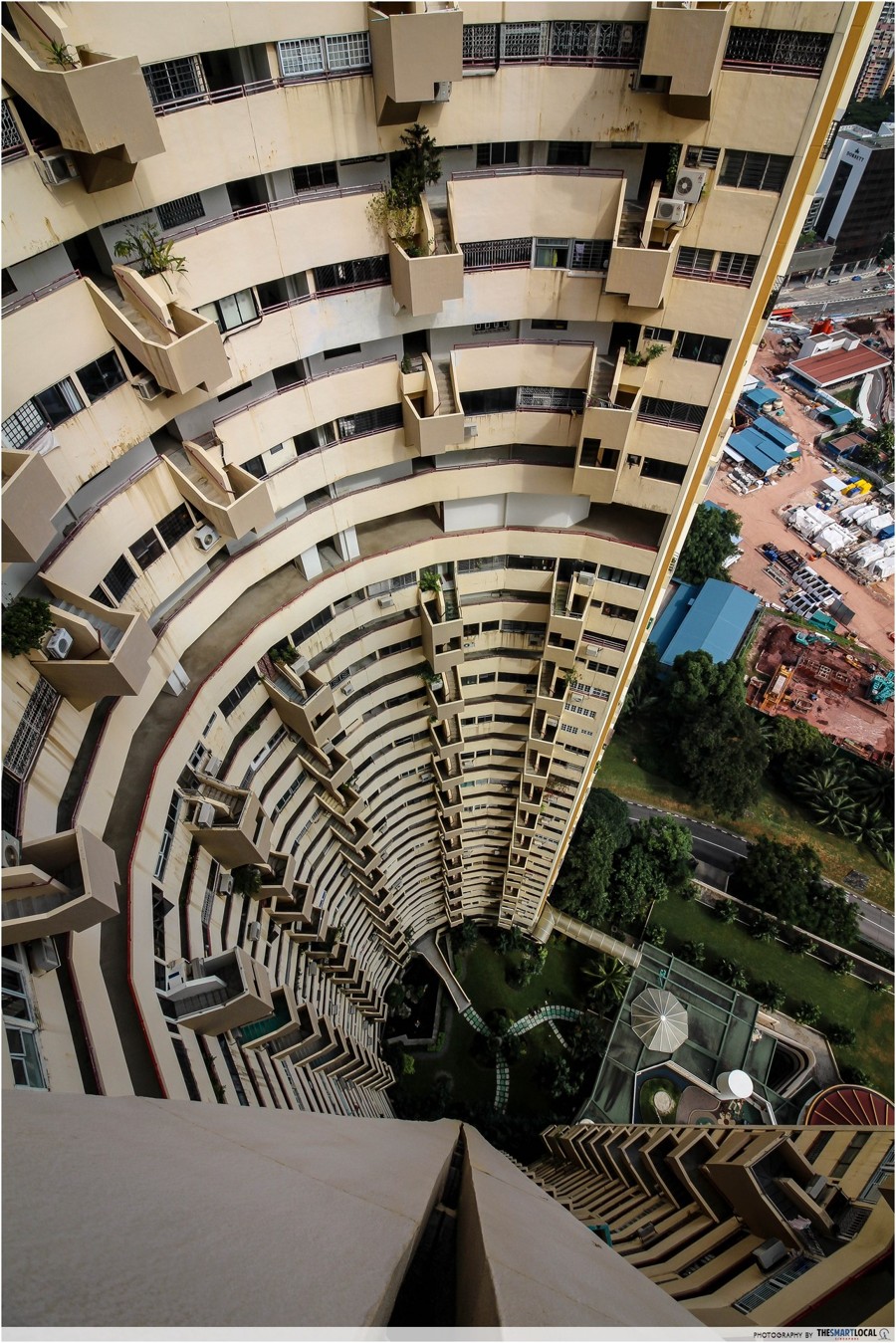 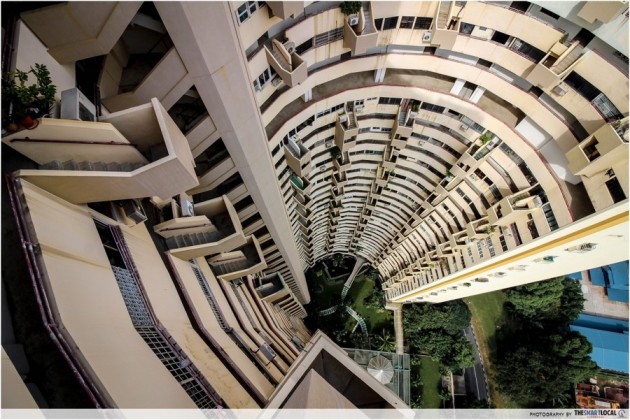 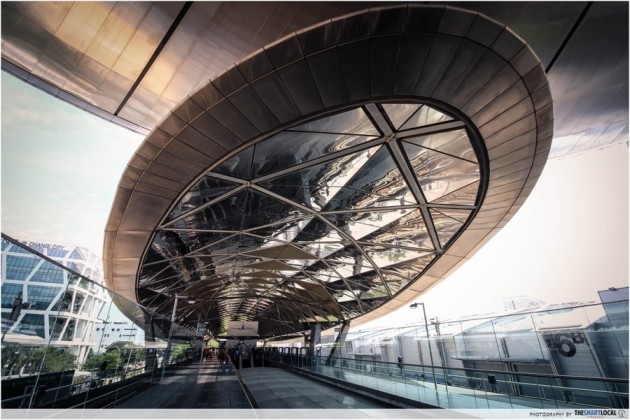 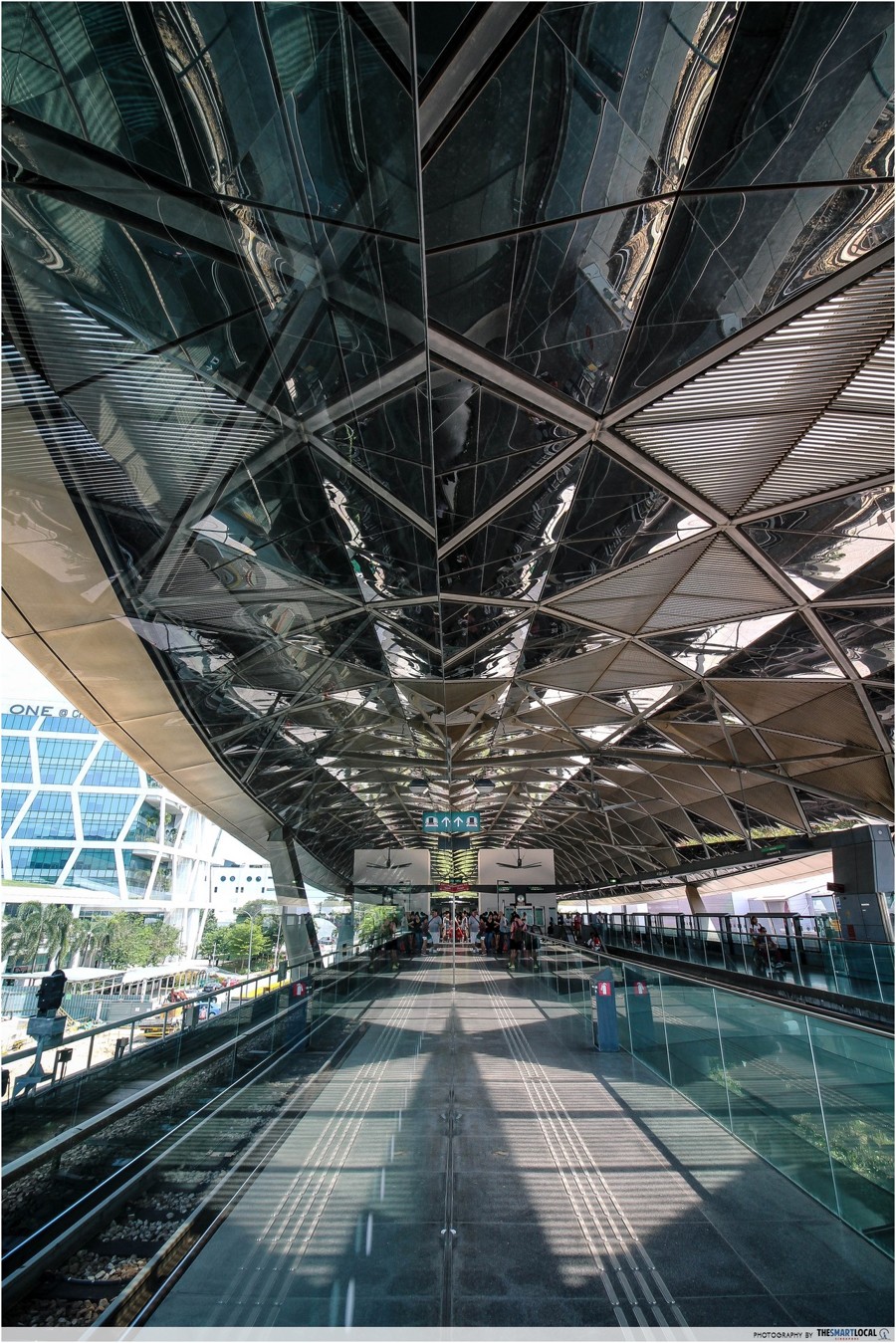 Opened in 2001, this MRT station is proof that public transport doesn’t have to be boring. The station’s shell-shaped roof is distinctly reminiscent of an alien spaceship, supported by two pairs of “Y”-shaped twin columns, which provides good viewpoints and angles for symmetrical photos and archi-lovers. 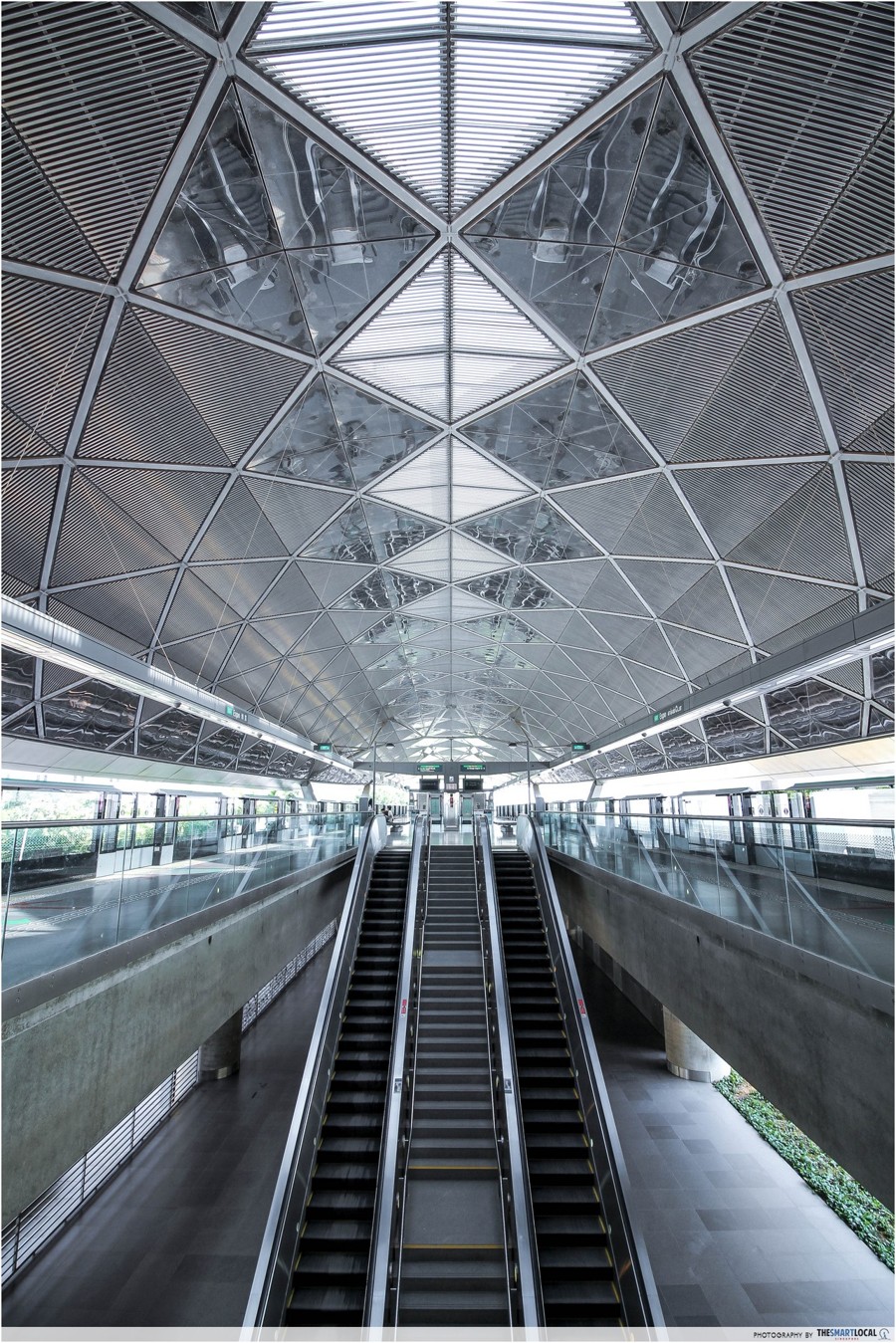 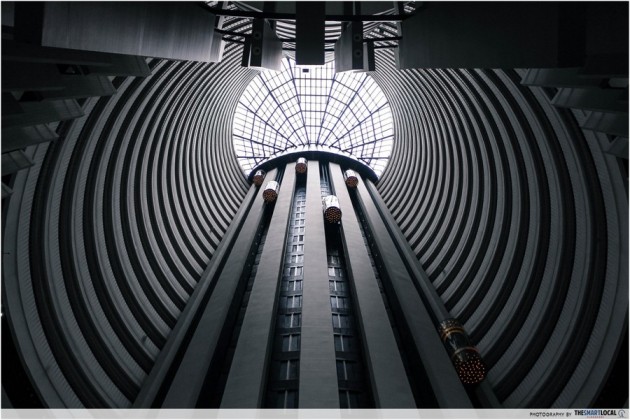 Situated just a stone’s throw away from the Singapore River, the Holiday Inn Atrium features a stunning interior architecture of a cylinder-like design, with its rooms offering 360-degree views of the Singapore cityscape. 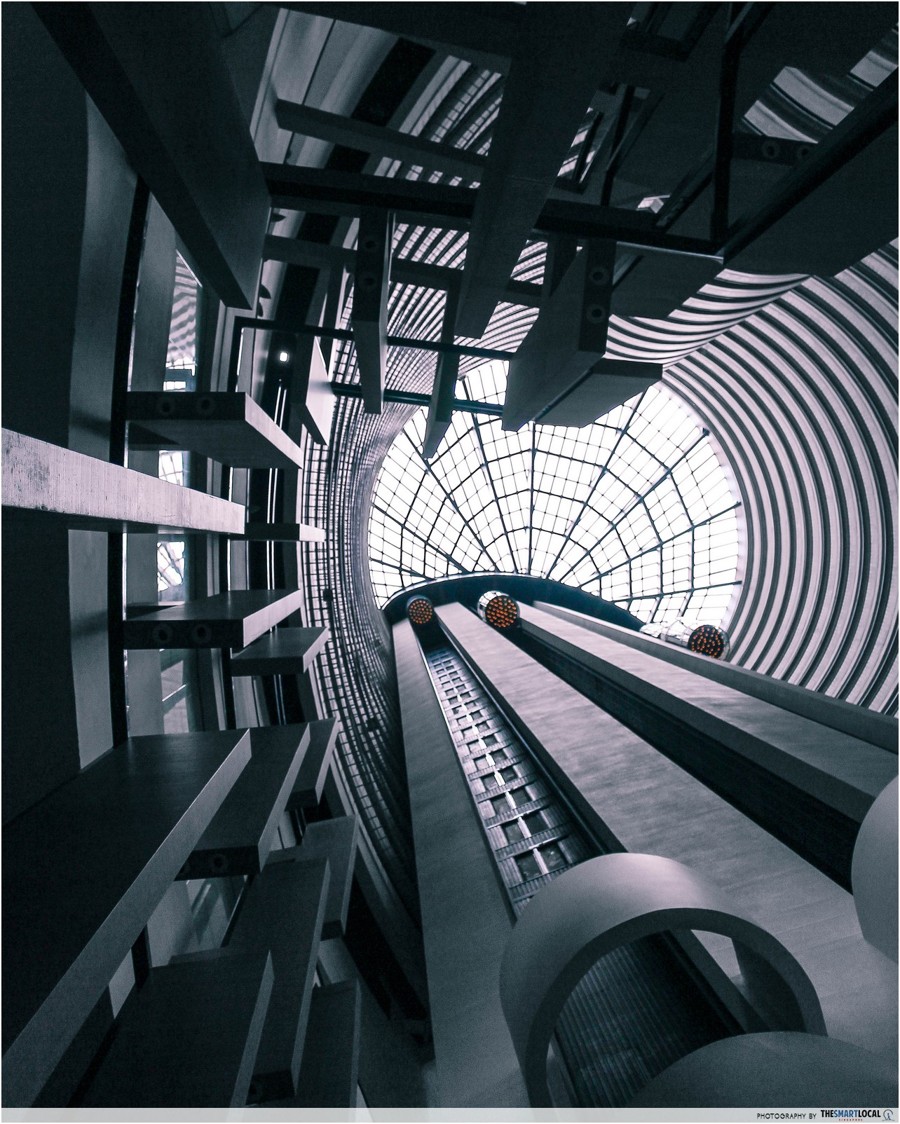 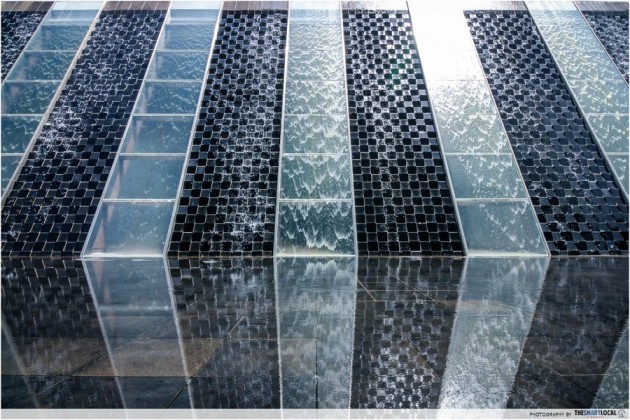 Not many people know about this gem situated right beside Marina Bay, since it exclusively houses only offices. Millenia Tower rests on four illuminated cylinders, which in turn, frames a striking glass lobby. Great architecture can be found at the water fountain right outside the lobby as well! 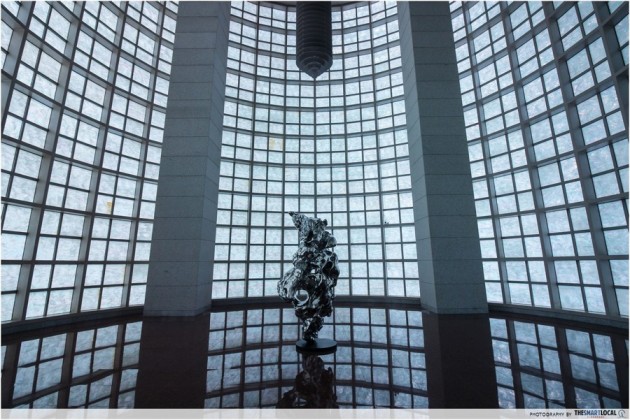 Directions: Alight at Promenade MRT and take a 2 minute walk. 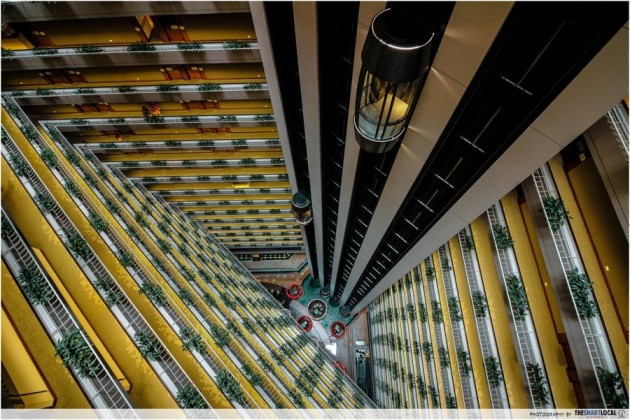 The Pan Pacific’s architecture is best admired looking down from level 22, which is accessible by the public. It’s amazing triangular-shaped design complements colours on every level to give a marvellous perspective. 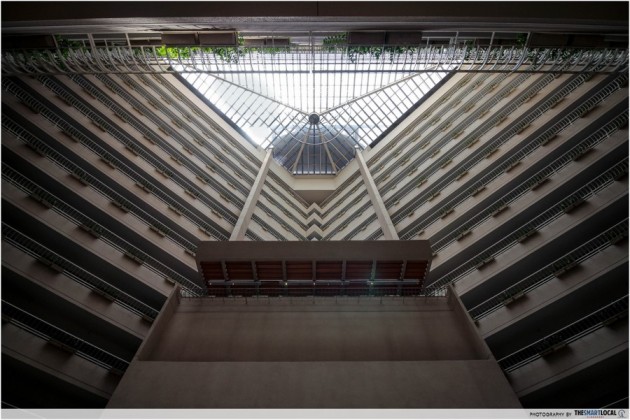 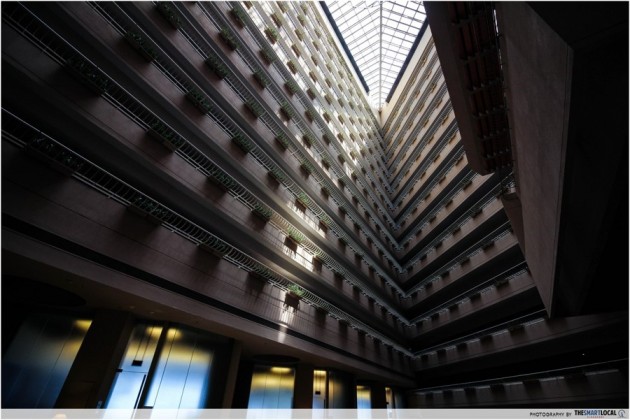 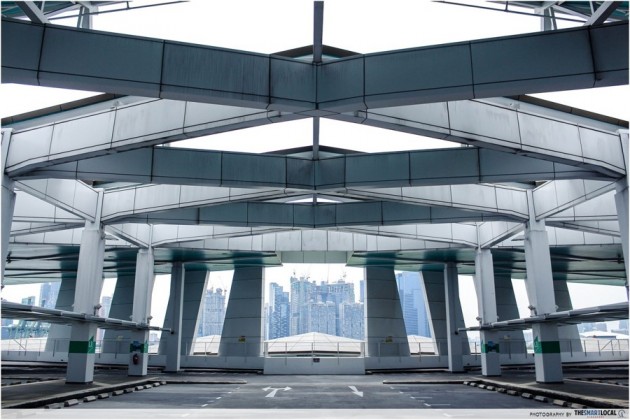 This location has deep waters and no height restrictions, enabling the pier to accommodate the largest cruise ships in the world. The stunning architectural design, coupled with Singapore’s iconic cityscape in the backdrop, is best viewed from Level 3 of the carpark. 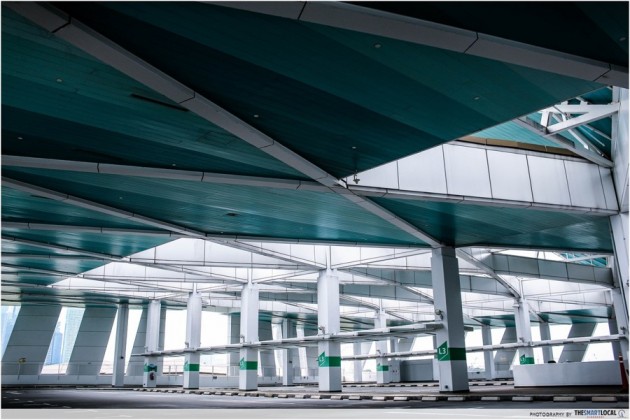 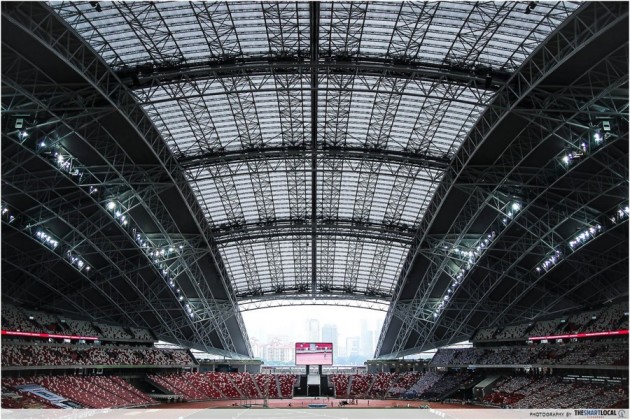 Singapore’s most obvious photo spot is also probably our best. Built on the site of the old National Stadium, the cavernous Sports Hub spans 312m and 80m high, with its roof coming in two separate parts – creating a truly awe-inspiring view of steel and concrete, whether full house or completely empty. The National Day parade had also returned to its old performance location this year, accompanied by the fireworks display along Kallang River. 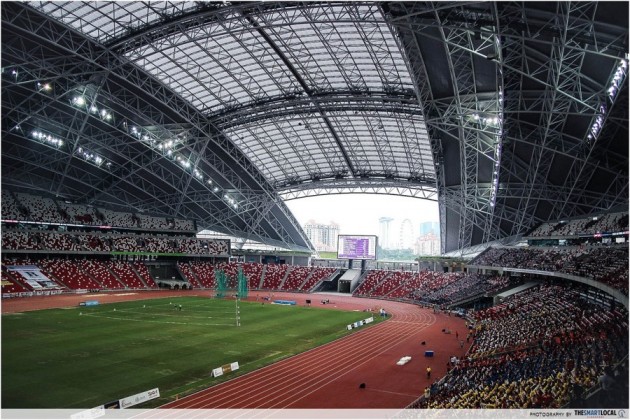 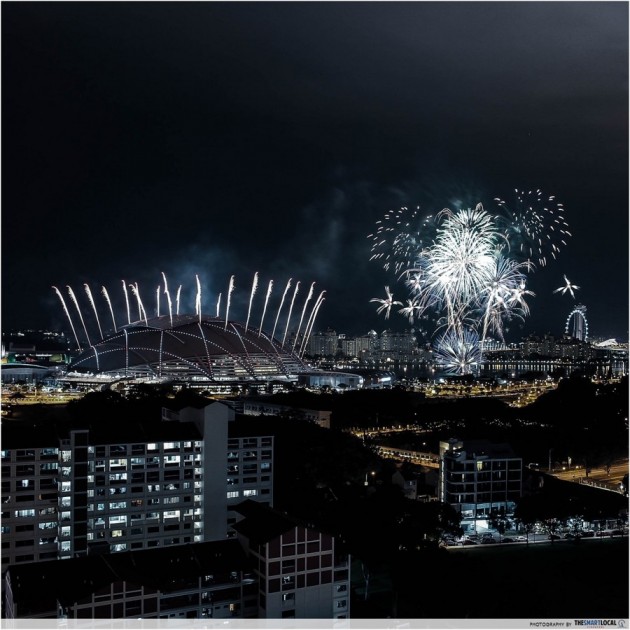 While we may live with a distinct lack of rolling hills and lush forests, there is a certain dignified beauty in concrete too. But it takes time to notice that nuanced grandeur. Perhaps we should be less worried about filling up our PokeDex, and look up every once in a while for some truly stunning views.

*All images taken by Eng Chin An. Find more of his work at @nightsofstars. 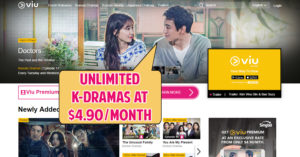