From a simple activity invented by a software engineer for his partner who loves word games to a global hit that was bought by NY Times for over a million bucks, Wordle is quite the viral phenomenon. It’s inspired plenty of relatable Wordle memes and of course, a variety of spin-off Wordle games – many of which are not even word-related.

From world maps and maths equations to terms from the Harry Potter universe, here are some Wordle variations for you to kill time till the OG resets at midnight.

For more Wordle fun, check out:

Wordle addicts know that waiting 24 hours for a quick round is hardly enough, but have no fear. Double, quadruple, octuple and even sexdecuple – that means 16, FYI – versions are here. 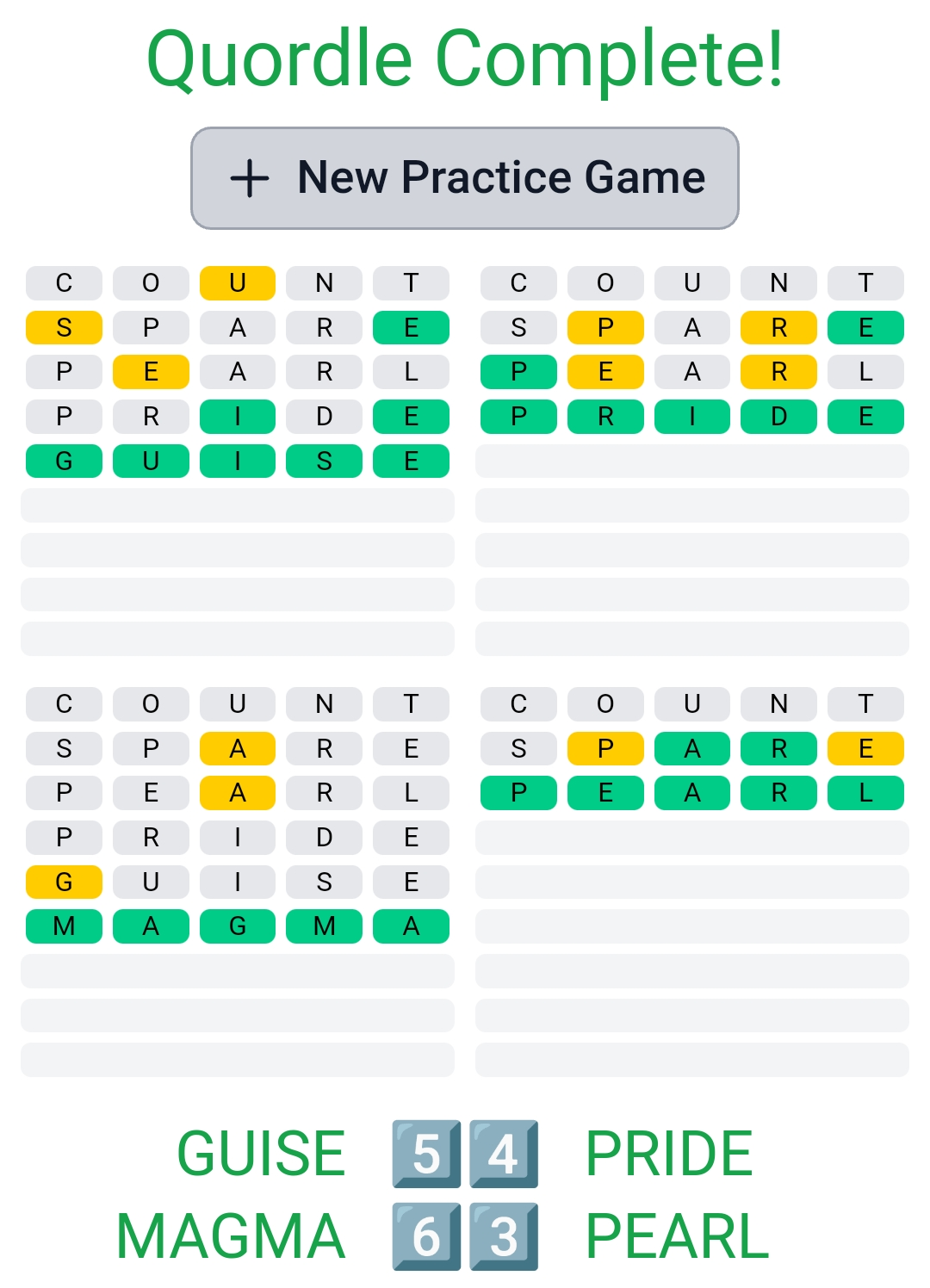 After your daily round of Wordle, you can work your way up these spin-offs till your brain gets increasingly exhausted, like the intellectual equivalent of easing in from a brisk walk to a full-on HIIT sprint. 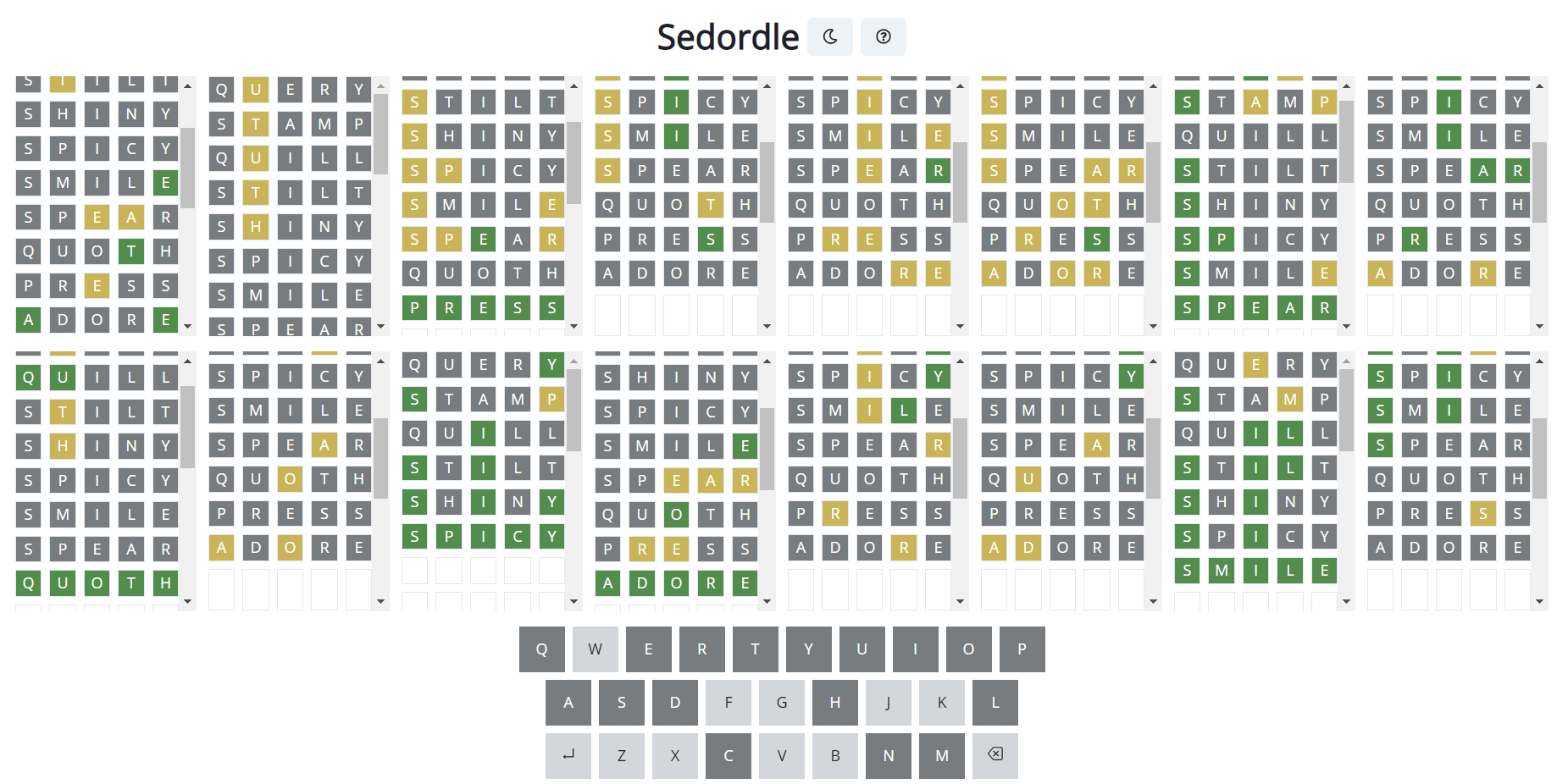 Trying to solve 16 words at once will have you a little cross-eyed
Image adapted from: Sedordle

Just when you thought it couldn’t get crazier, bam. Sedordle, a whopping 16-word puzzle and 21 tries to nail them all. But then again, it actually isn’t that difficult considering there are merely 26 letters in the alphabet. 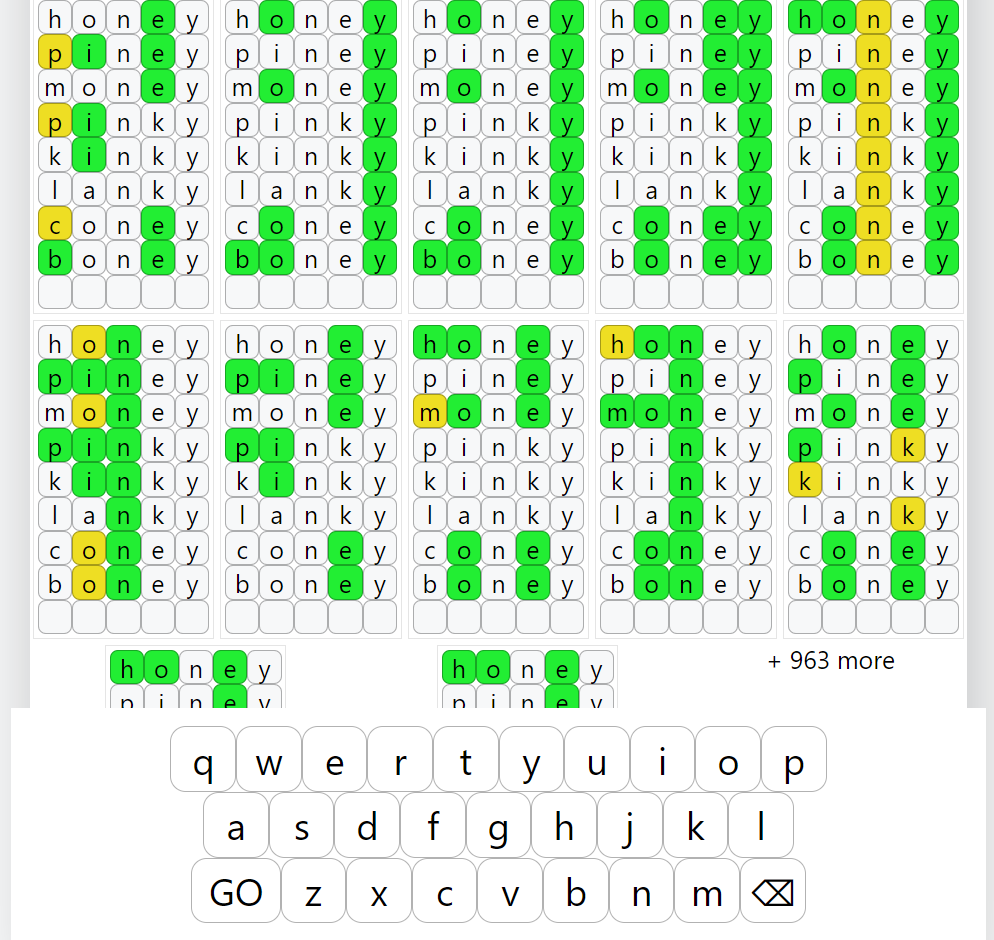 If you’re feeling like a proper mad lad, there’s a spin-off Wordle game called Kilordle that grants you 1,005 tries to solve 1,000 words.

Guess that’s one way to spend an entire afternoon! 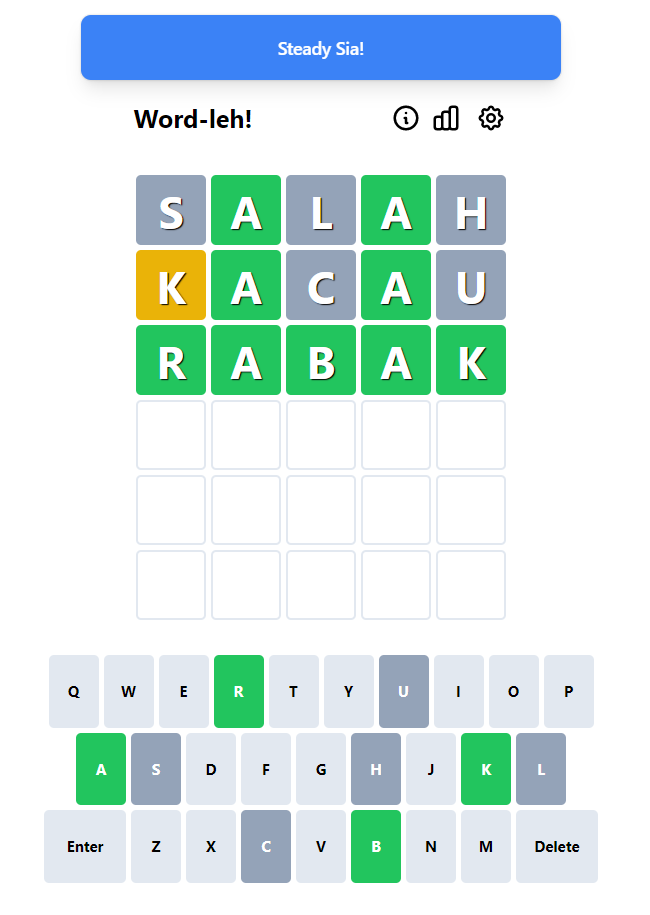 “We are Singapore, Singaporeans!” So naturally, our Wordle routine has to include a true-blue Singaporean version: Word-leh.

Prepare to wrack your brains for all the five-letter Singlish words in existence. Make sure to brush up on your vocabulary of Malay words and Hokkien dialect, as the answers include terms like “jelak” and “bojio”.

As a writer who got E8 for my Maths O level results, games like Nerdle are my greatest nightmare. I can definitely see how satisfying it would be for folks who have a knack for numbers though, and it’s a good way to work out the ol’ noggin especially if you don’t deal with calculations in your daily life. 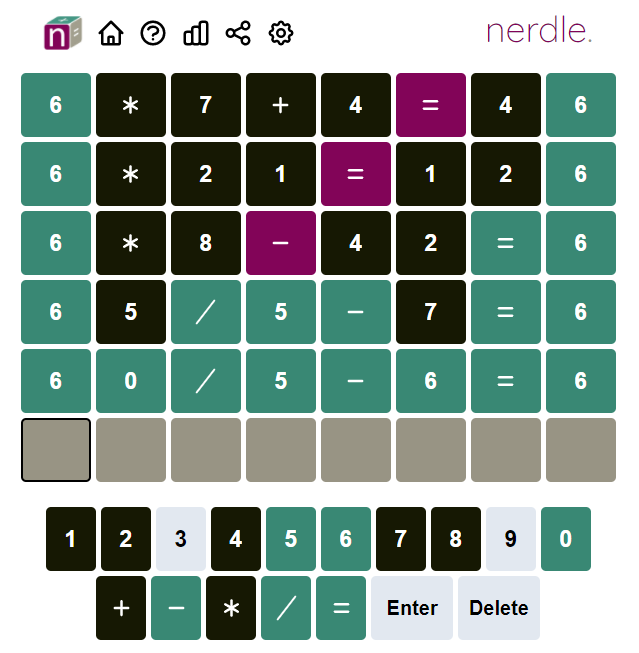 Trying one round for the purpose of this article had me close to tears
Image adapted from: Nerdle

Filling in not just the digits but the plus (+), minus (-), multiply (*) or divide (/) symbols, you have to correctly guess a full maths equation in six tries.

Keep in mind that there are eight tiles per guess. So, after discounting two spaces in the tiles for your calculation symbol and equal sign respectively, you still have six tiles to fill. This means no basic, small number equations like “2 * 10 = 20”. In fact, most equations in the game usually have two calculation symbols included, so good luck with that.

Hold your bashful giggles, as Lewdle tends to get – well, lewd. The game is actually surprisingly difficult, considering there’s a tight limit to the number of lewd five-letter words we know. 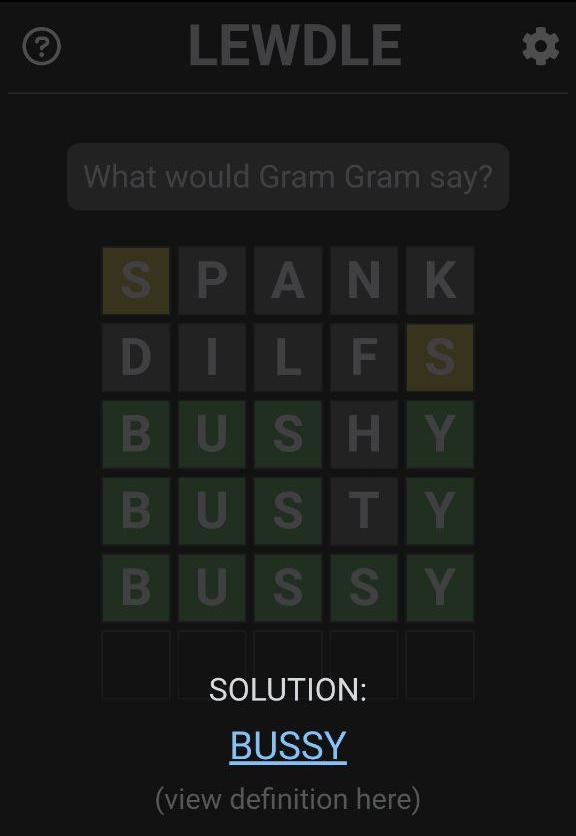 There’s a helpful link to the answer’s definition at the end of each round, which is highly appreciated considering some answers are region-specific slang terms. For example, one of the answers was “minge” – British slang for the female pubic area and a rare bit of info I only happen to know from watching Sex Education on Netflix.

One thing’s for sure, I never knew how awkward and paiseh I would feel when playing this game in public, especially on public transport with strangers sitting beside me. Catch me decreasing my brightness to 10% so they won’t see the word “penis” plastered on my screen… 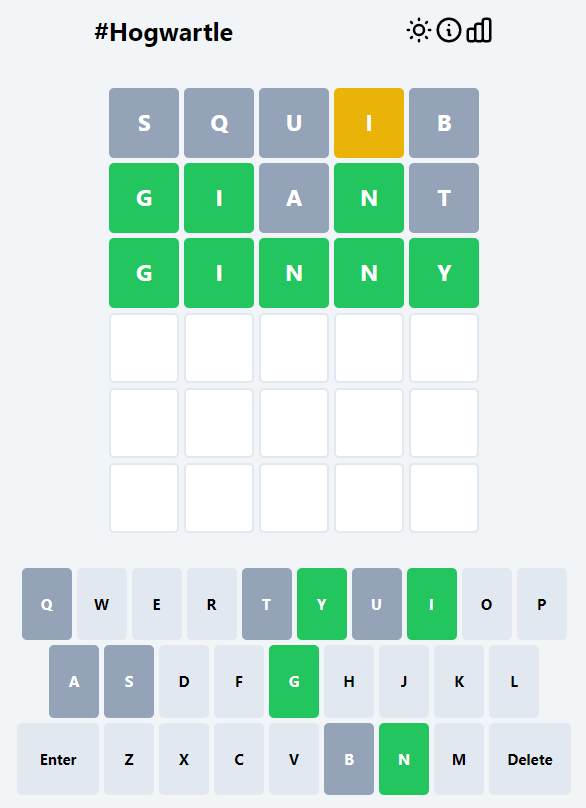 Hogwartle is a Wordle spin-off that’ll separate the hardcore Potterheads from the muggles.

This fan-operated game uses a word bank of every five-letter term in the Harry Potter universe. It could be as general as “wands” and “books”, or character names like “Avery”, “Padma” and of course, “Harry”.

Bonus: Lordle Of The Rings – Terms from the LOTR universe 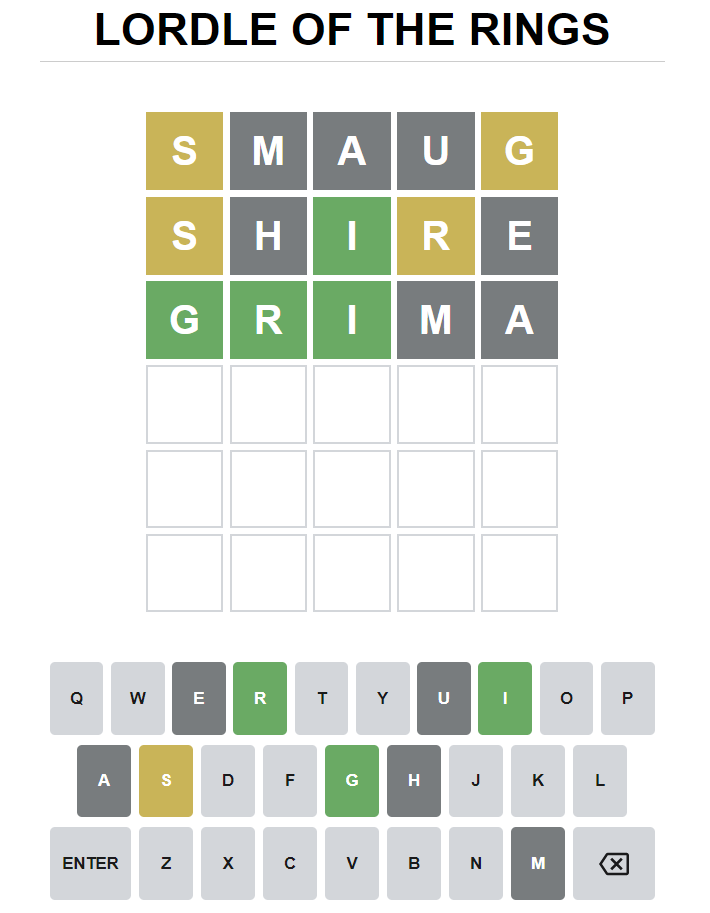 Image adapted from: Lordle Of The Rings

First of all, props for the punny name.

Similar to Hogwartle, Lordle Of The Rings uses terms and character names from Lord Of The Rings series of novels.

Play Lordle Of The Rings.

6. Heardle – Guess the song as quickly as possible 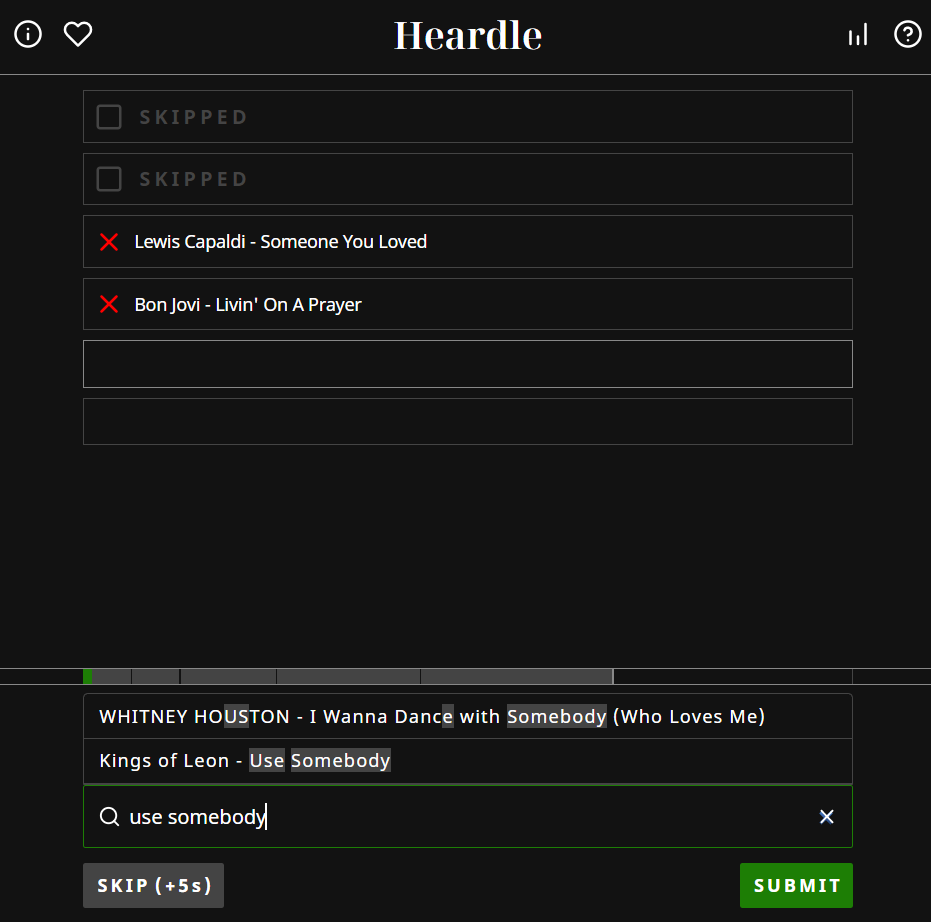 We all know the satisfaction from being able to identify a song the moment its intro plays on the radio. Now you get to experience that high once a day with Heardle, the music version of Wordle.

A song intro will be played five seconds at a time, and the aim is to guess the song correctly as quickly as possible. If you’re stumped, you’ll have to skip the turn and hear the tune in five-second additions.

Tip: As the game uses a SoundCloud plug-in to stream songs, some days’ rounds may be unavailable in Singapore, and require a VPN. Try downloading Hola VPN browser, a free community-powered VPN.

7. Squirdle – Pokémon species in The Price Is Right style

Instead of the standard Wordle format which tells you whether certain alphabets are in place, valid but in the wrong position, or not included in the word at all, Squirdle operates more similarly to The Price Is Right. 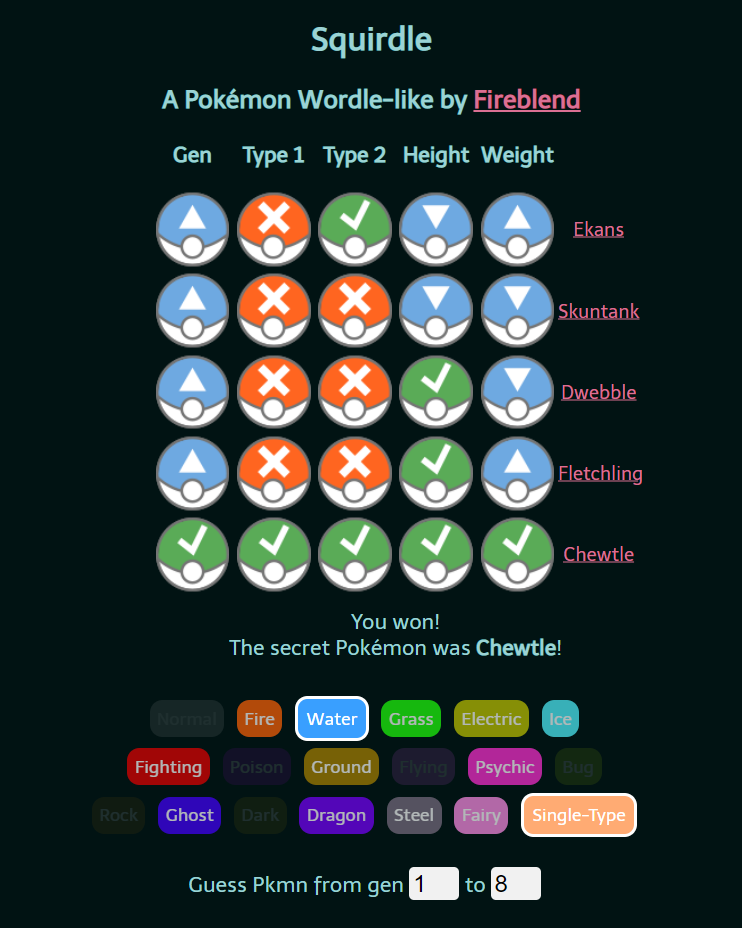 Don’t worry, you won’t need to have Pokédex-levels of height and weight memorisation. A drop-down menu with the necessary info will appear when you type in each guess, so you can do a quick check before hitting enter

Tip: If you’d like to limit the answer pool to the generations you’re familiar with, you have the option to toggle the scope of generations. ‘Cause let’s face it, not all of us are privy to the 908 total pocket monsters.

8. Worldle – Guess the country or territory based on a map 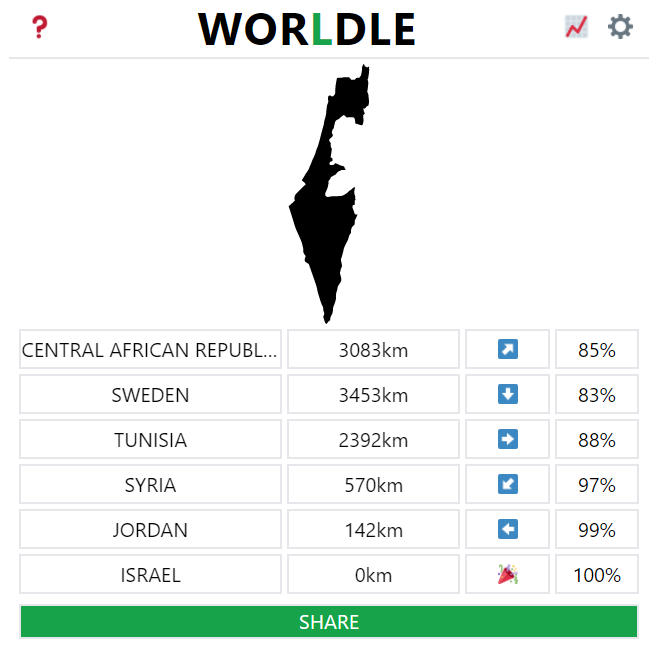 You might want to keep a tab of the world map open for reference
Image adapted from: Worldle

One for the Geography buffs, playing Worldle consistently could very well edge you towards Max Zeng status. Y’know, the Singaporean student who hard-carried his team on a UK quiz show with next-level knowledge of the world map.

Unlike the word-based spin-offs, this version will give you the direction and distance in proximity between your guess and the answer. It’s akin to playing hot/cold when you’re searching for something or someone. 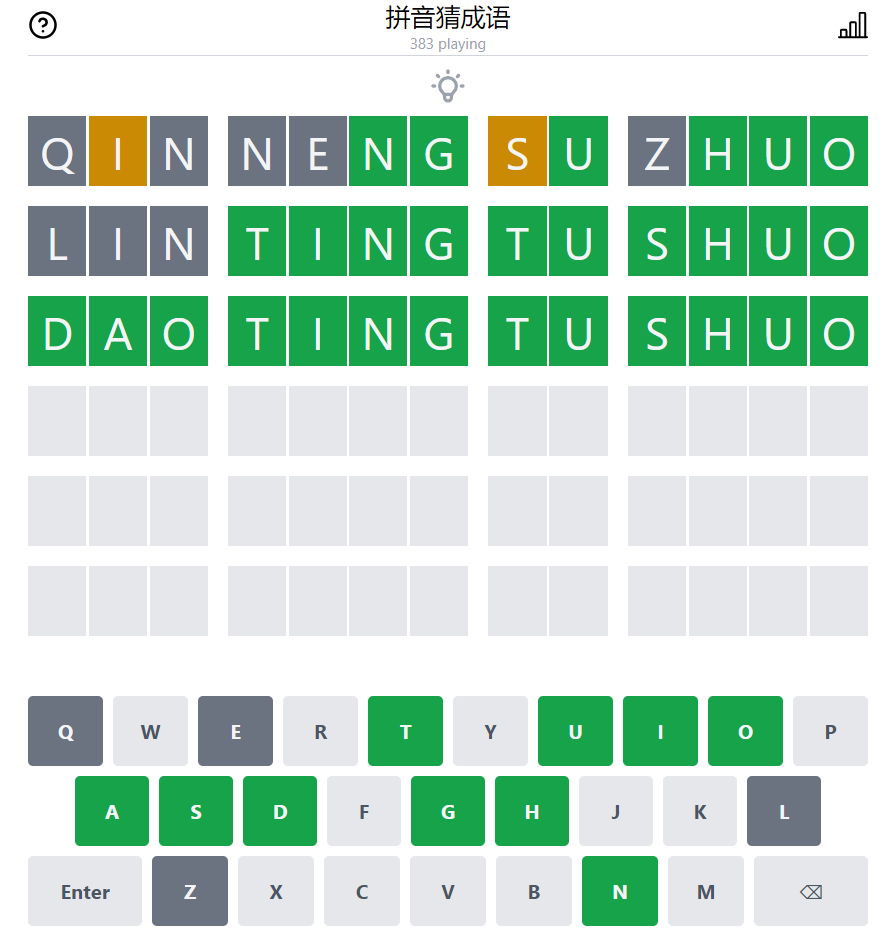 If you consider yourself a master at Chinese idioms a.k.a. chengyu, this Wordle spin-off will be right up your alley. Instead of guessing one word at a time, Pinyin Guess Chengyu requires you to guess a full phrase of four Chinese characters, spelt out in hanyu pinyin.

To prevent it from being too difficult, you have the option of unlocking one hint for each turn, which tells you the intonation for one of the four characters – chosen at random. The number of tiles also helps to narrow down your guesses, as hanyu pinyin spellings can range from two to five letters.

10. Absurdle – Answers change depending on your guesses

While many of us can’t bear to complete a Wordle round too quickly and having to wait a whole 24 hours, Absurdle will throw you to the other end of the spectrum. 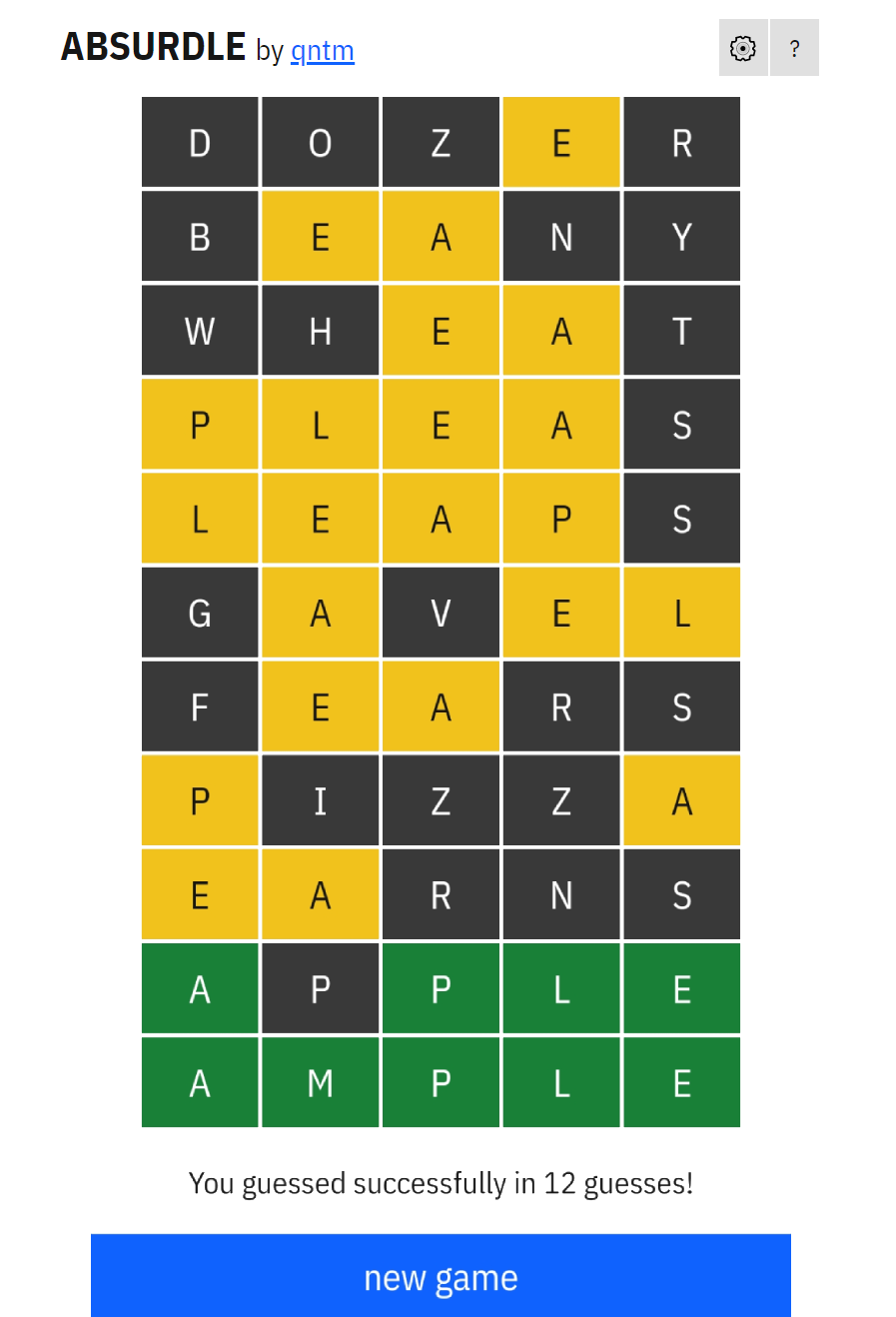 Prepare to get vexed. Very vexed.
Image adapted from: Absurdle

It’s intentionally programmed to be as prolonged as possible, with an eventual answer that will change in response to your guesses instead of being fixed from the get-go. Basically, the game will try to siam your guesses for as many turns as it can, which could go on for quite some time since Absurdle has no limit on the number of guesses.

Because the possible answer pool changes based on your guesses, keying in different starting words for each round will lead to different game pathways and possibilities each time.

Wordle has taken over the world by storm, to the point where some are calling it the Circuit Breaker baking phenomenon of the Omicron era.

It certainly gives us something fun and engaging to look forward to on every new day, and it’s led to wholesome exchanges and communities based on sending each other their Wordle score – depicted in green, yellow, grey and black square emojis.

To keep the momentum going after your Wordle solve of the day, give these free spin-off Wordle games a try. And if you’re itching for more online fun and games, check out our other guides:

5 Things To Do At Science Centre & Snow City This March Hols With The Fam, Save Up To 20%...
10 Best Confinement Centres & Services In Singapore For Mums To R&R After Having A... 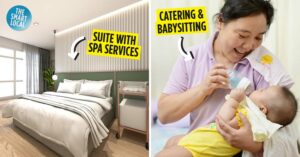