If you’re seeing green and yellow squares every time you close your eyes, chances are you have a slight obsession with Wordle. The latest mini-game to take over the Internet has plenty of us guessing five-letter words in as few tries as possible, and boy is it a hit. The team here at TheSmartLocal hasn’t been spared from the addictive daily quiz either.

To uphold our reputation as wordsmiths, we decided to find out which are the best words to start Wordle with. Thankfully, plenty of data scientists – who are equally addicted – have done research into the most optimised five-letter word for us. Here are 10 of the most efficient starters for your next Wordle round.

Reason: Grant calculated which starting word would give you the lowest average guesses using the Wordle answer sheet, while the NYT used a sample of 4,500 commonly-used English words to get their results.

Mathematician Alex Selby devised an algorithm that determined “SALET” is the best word to start Wordle off.

Reason: Alex’s algorithm determined that Salet took the least average guesses of 3.4212 to guess the word of the day. Popular math YouTube Grant Sanderson from the popular Crane video also corroborated this conclusion with a follow-up analysis.

Wordle’s all about probability, and that involves numbers. More than seven million people watched YouTuber Grant Sanderson’s video on why Crane is the best Wordle starting word. Unfortunately, he got one tiny detail wrong and uploaded a follow-up video naming “SOARE” as the best opener instead.

Reason: Grant calculated which starting word would give you the lowest average guesses using the Wordle answer sheet and determined Soare is the best single-try opener. Yes, all the answers for Wordle are already figured out, but where’s the fun in that?

Data analysts have also entered the chat. Researcher Daniel Kats analysed the Wordle dictionary and arrived at “TRACE” as the word with the lowest average guesses to solve.

Reason: Based on his analysis of an asymmetric dataset, Daniel found that Trace took an average of 3.58 guesses to solve.

Another word from Daniel’s analysis and his pocket pick for a starter is “SERAI.”

Another YouTuber MrExcel.com who specialises in Excel and statistics looked at 8,000 five-letter Scrabble words and ended up with “AROSE.”

Reason: A, E, O, R, and S are the letters most commonly found in his analysis of words, and together they spell “arose.” Another option to start off is “ARISE.”

Being an expert in something requires experience, and a professor called Barry Smyth found a way to shortcut this by using a Wordle simulator. He ran a million games through it – more than we’ll play in a lifetime – and found that “TALES” was the best single word.

Reason: From 2,500 possible five-letter words, this simulation found that “TALES” had a success rate of over 95% averaging 3.66 rounds when using just one word to start the game.

If you’re okay with using at least two rounds to solve the word of the day, “CONES” is the second-best word Professor Barry found success with in his simulation.

Reason: “CONES” had a higher solve rate of 96% when paired with Trial as the second word. Using both words to kick off your daily Wordle will help you solve it in an average of 3.68 rounds.

Another word coming out from the professor’s simulation is “HATES.” Players who guess it first, followed by “ROUND” and then “CLIMB” would see a higher success rate.

Reason: While you might only guess the word on the fourth try, using Hates, then Round, and then Climb help you solve it 97% of the time.

“AUDIO” is a community favourite that we’ve seen said by many as their go-to starting word.

Reason: It checks off four different vowels and it’s a commonly-used term.

No, we didn’t forget about “ADIEU,” but it’s not as efficient of a word as you might think.

Reason: Like Audio, you can find out if the daily Wordle has any vowels immediately. However, it’s not that common of a word, and you should only use it if your strategy involves getting vowels and common consonants out of the way.

Other good starting words to use for Wordle

Think simple and common. Of the 13,000 words that you can key into Wordle, only 2,315 are possible answers as they are common words, not “aargh.” You can also try to hit common consonants like R, S, and T as it might benefit you more than vowels. While you’re at it, remember that letters can repeat, so don’t be afraid to guess “BUNNY” or “HAPPY.” The New York Times even developed WordleBot to help analyse your answers and give you advice for future Wordles.

If all else fails, you can turn to Unwordle. This website tells you the best word to guess next. It kind of goes against the spirit of Wordle, so use this only as a last resort if you can’t think of a word anymore!

Best words to start Wordle with

Everyone I’ve spoken to has a different strategy when it comes to Wordle. Some people start with a different word every day, while others are determined to guess it in the least attempts possible. There’s no right or wrong way to play the game, but if you’re in the “minimum effort, maximum reward” camp, here’s a list that will keep your Wordle streak going. 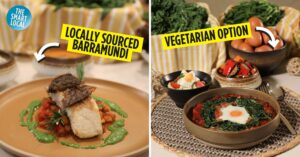 Thomson Medical Has French & Mediterranean Meals For Post-Partum Mums, Made With Local Produce
iShopChangi’s Mother’s Day Sale Has Up To 60% Off, So You Can Sayang Mum With...