Being a Taylor Swift fan in Singapore

As kids – heck, even now – most of us have probably had our fair share of celebrities that we’ve admired and supported. No matter if you still do this on the down-low or if you’re fully indoctrinated into a fandom, it’s no secret that pop culture has been undeniably integrated into our everyday lives.

With 2021 marking my 13th year of being a Swiftie, I think it’s safe to say that my love for Taylor Swift is here to Stay Stay Stay. This might sound crazy and completely unfathomable to some, so buckle in as I share my story as a celebrity superfan and why I don’t see myself stopping anytime soon.

How my love for Taylor Swift began

Just like every other 6-year-old at the time, I was completely and utterly obsessed with the hit Disney Channel show, Hannah Montana. The idea of living a double life fascinated me as a kid, and my whole family was dragged to the cinemas the moment Hannah Montana: The Movie reached our shores. 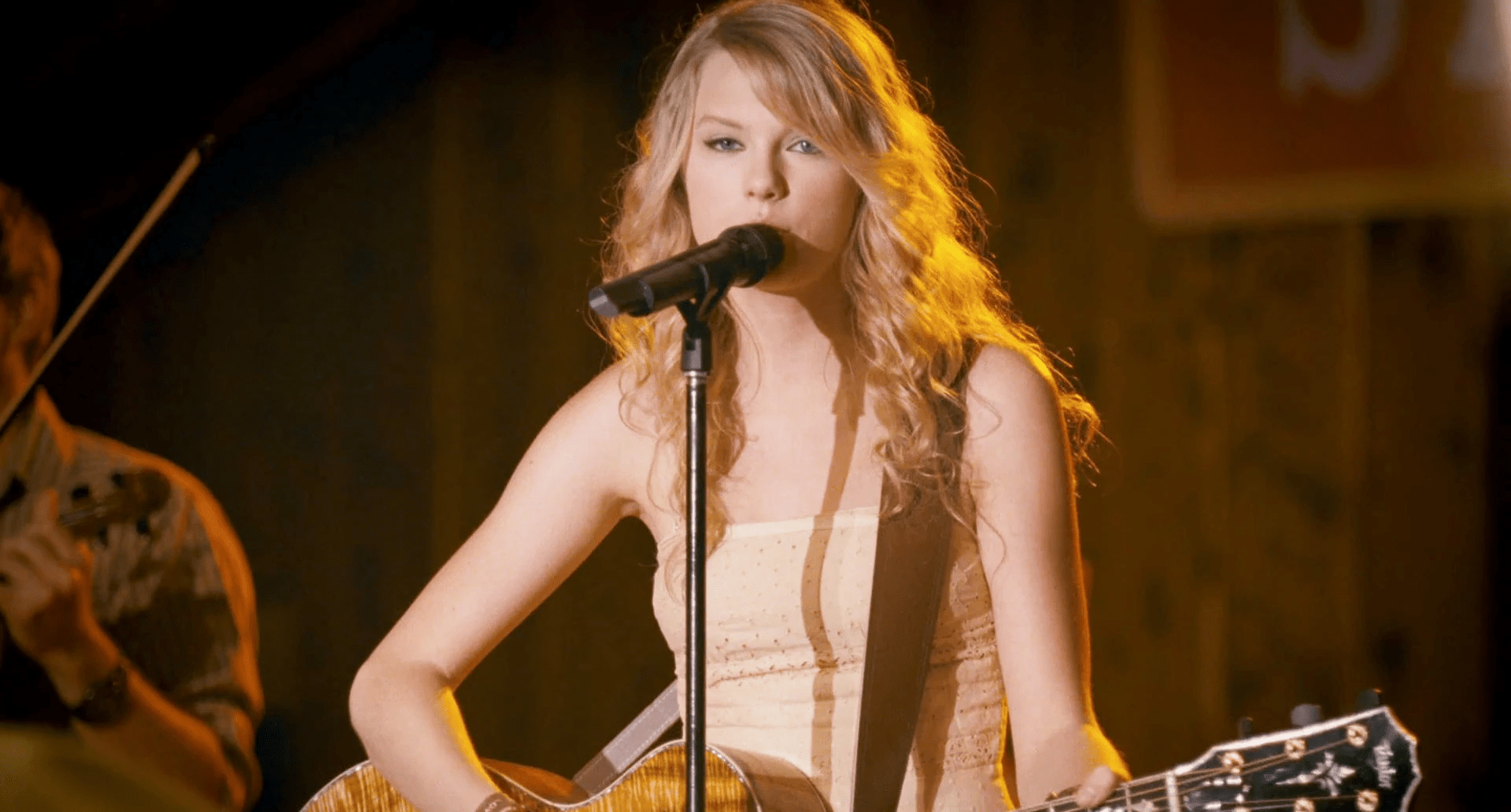 While I don’t remember much from the movie, there was one particular scene that basically burned itself into the back of my mind: Taylor Swift’s Crazier cameo. Although I vaguely knew of her back then, it wasn’t until this very moment that I truly fell down the rabbit hole that was her music.

Immediately after the movie ended, my dad and I Googled her and played her songs on repeat on the drive back home. The rest, as they say, is history – little me was hooked.

Growing up as a hardcore Swiftie 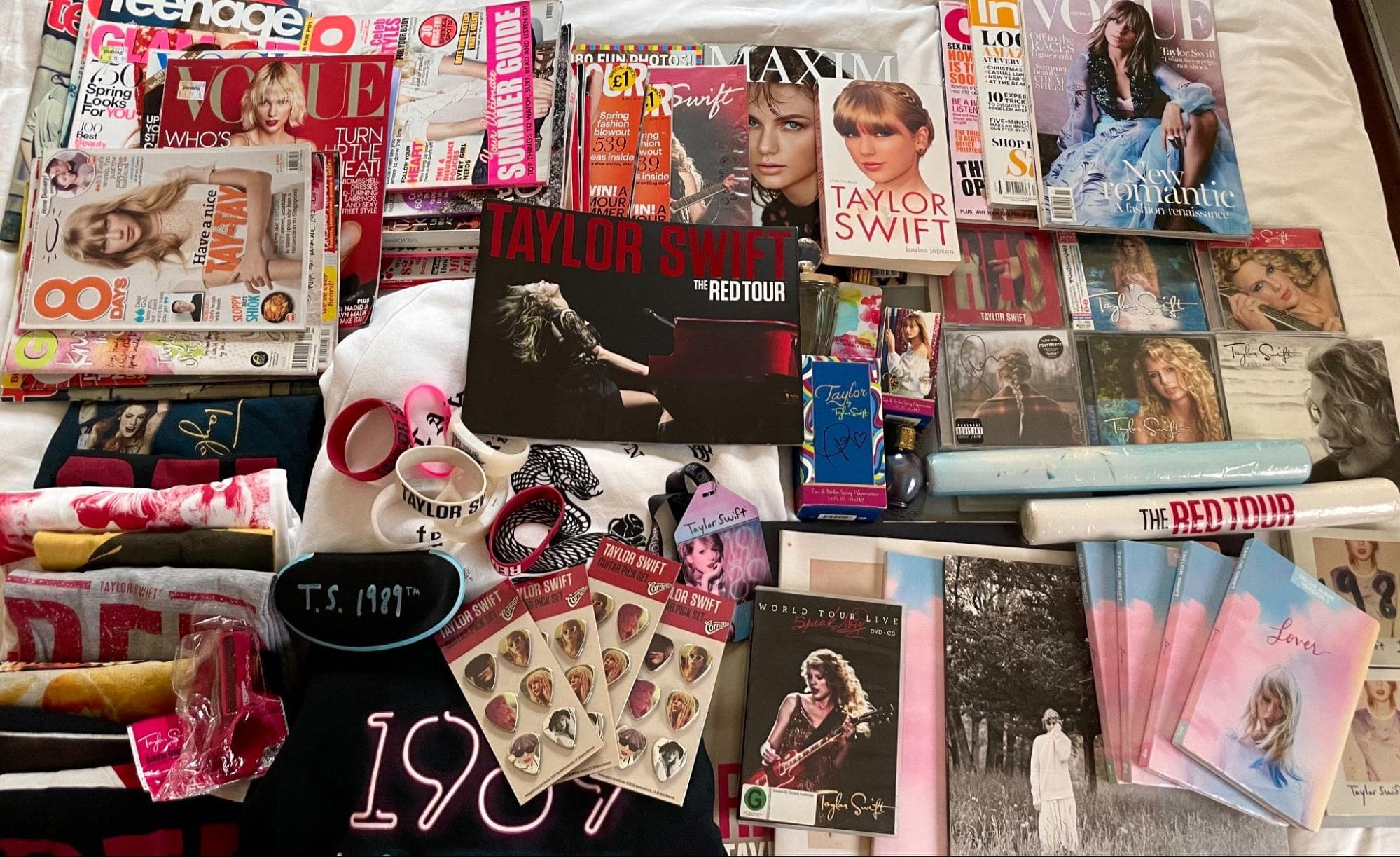 Most of my Taylor Swift collection that I’ve amassed over the years.
Image credit: Megan Kwek

As a self-proclaimed veteran in the Swiftie community today, I’ve pretty much experienced it all. My Facebook photos are flooded with pictures of Taylor Swift from 2010, my Instagram is full of edits I used to make when I was 11, and of course, my emails are linked to the many fan accounts I’ve had over the years. 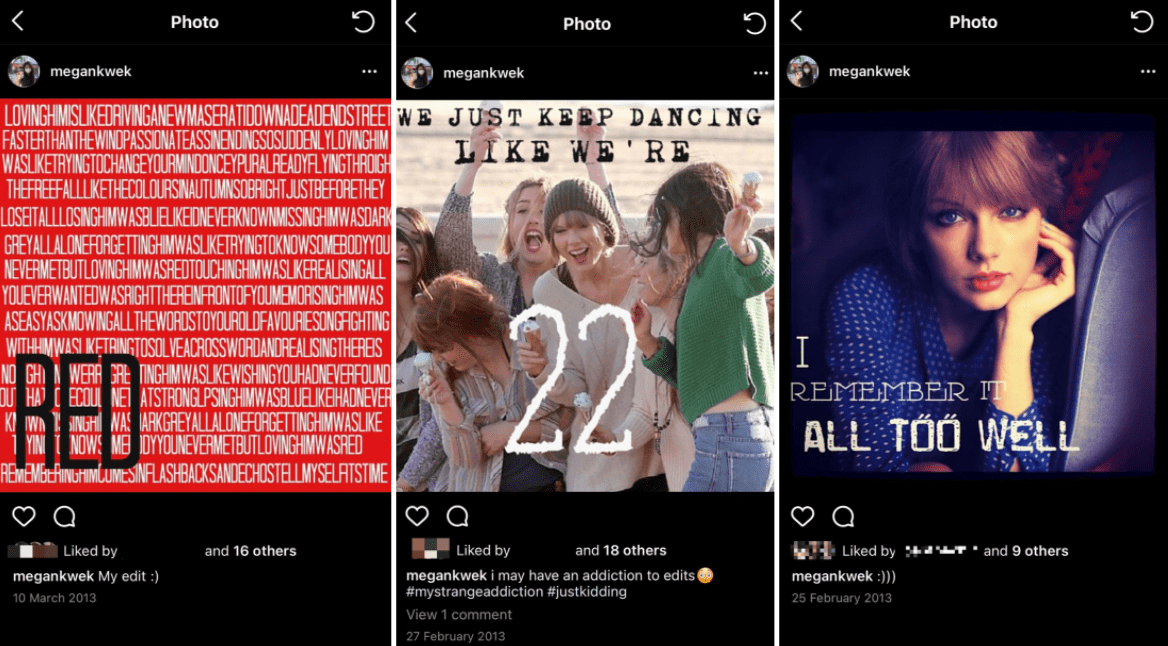 The edits I somehow had the confidence to post
Image credit: Megan Kwek

These “tributes” of mine have definitely perpetuated my title as that “Taylor Swift fan” among the people that know me, but my all-time favourite Swiftie-activity has to be attending Taylor’s concerts.

A few years after I had “officially” joined the fandom, Taylor graced our Singaporean shores for the first time with her “Speak Now World Tour”. Donning my favorite outfit – of course I had to look my best for Ms Swift – and holding a poster my sister and I had designed together, I got to see Taylor IRL for the first time that night. 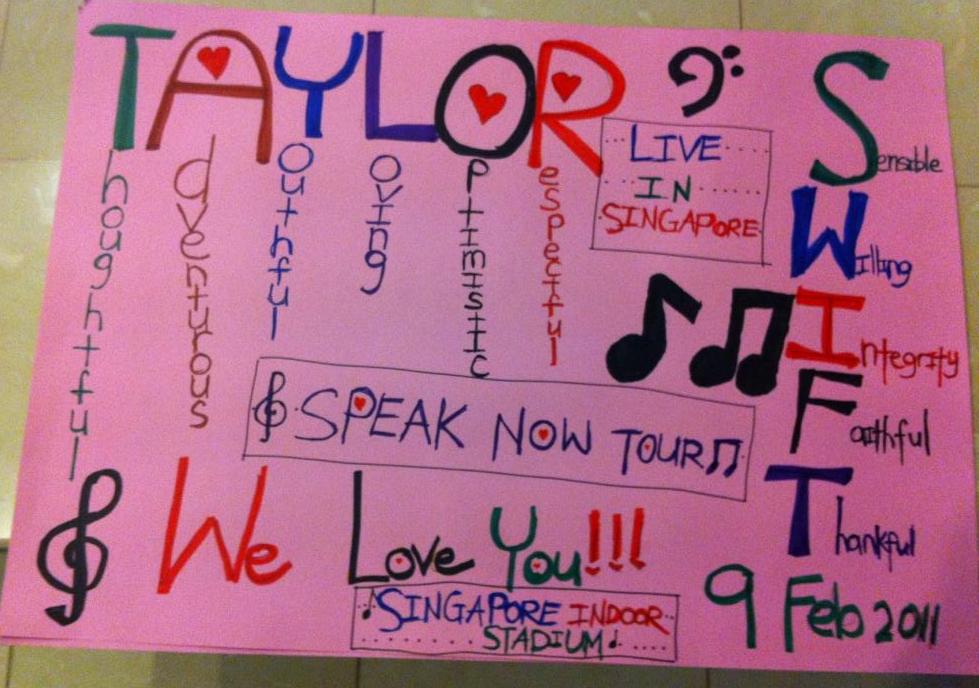 As childish as this poster may look, we were dedicated Swifties, even as kids.
Image credit: Megan Kwek

Her show was unlike anything else I had ever seen – granted this was my first ever concert so there was little basis for comparison. But from the intricate stage sets to Taylor’s beautiful costumes, I was, dare I say, Enchanted.

Actually seeing Taylor in the flesh reassured me that she wasn’t just some super talented robot with an incredible knack for singing and songwriting – she was real. Hearing her songs live and singing along to them brought me into a state of pure and utter euphoria, and I may or may not have shed a few tears that night.

Non-Swifties might be surprised to know that Taylor Swift concerts are basically just massive dress-up parties where everyone is invited. Even though most of my photos have either been lost in the abyss that is iCloud or are too embarrassing to show, I still managed to dig up a couple of concert ‘stumes that I put together: 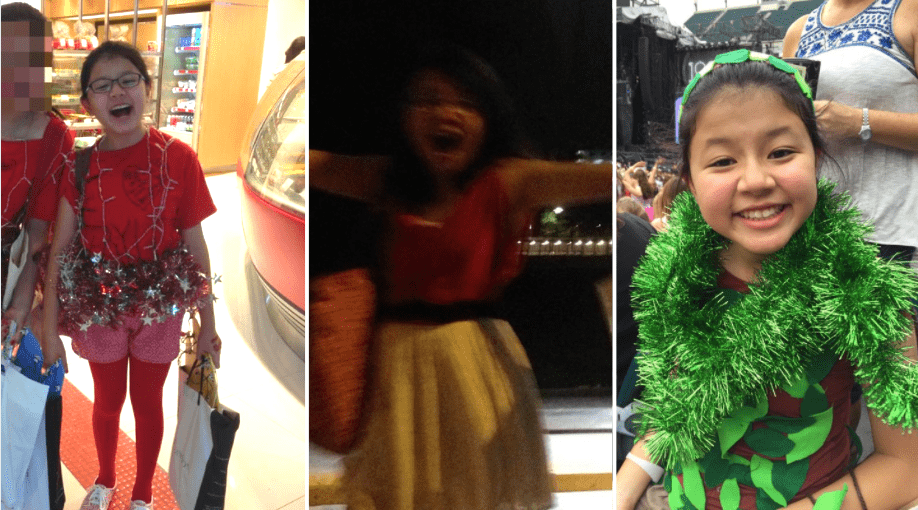 Only hardcore stans might recognise the middle pic as a reference to her song Holy Ground.
Image credit: Megan Kwek

While I don’t celebrate Halloween, attending a Taylor Swift concert is what I imagine it probably being like. Over the last 13 years, I’ve been lucky enough to catch eight of her concerts – some even on foreign land – so I’d like to think I’ve mastered the art of the “Taylor Swift concert costume”.

From our fully red getup for Taylor’s Red Tour to coming as a literal tree as a nod to the 1989 hit, Out Of The Woods, putting together these outfits and seeing what other Swifties had come up with made every concert experience even better.

Taylor’s team has also been known to scour the crowds for the best-dressed and most enthusiastic Swifties during the concerts. Around 30 people get chosen at each show and they get to go for an exclusive after-concert party with food, drinks, and Taylor Swift herself. 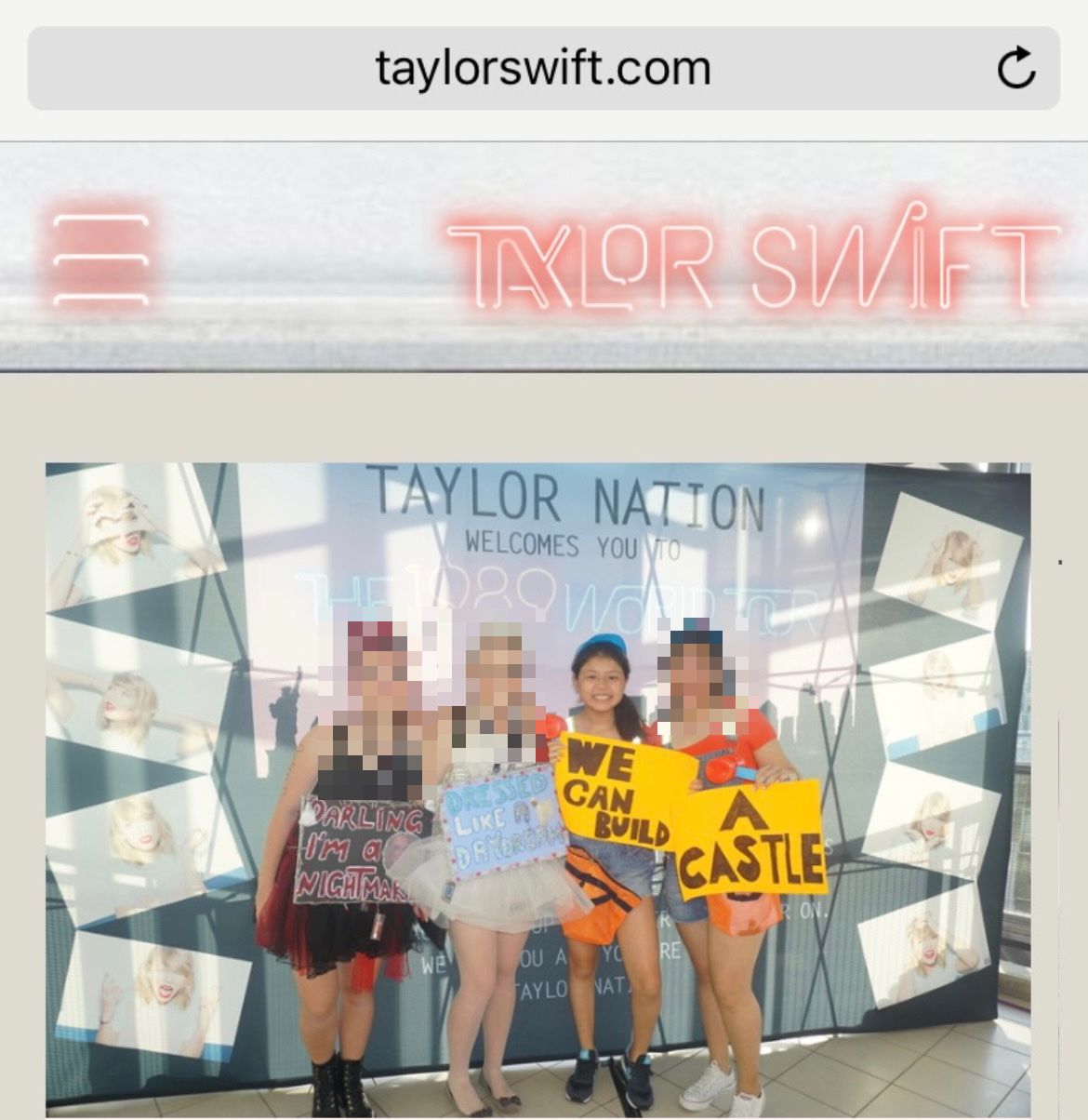 While I’ve never been chosen for these parties, my photo has been featured on the official Taylor Swift website before.
Image credits: Megan Kwek

The appeal behind Taylor Swift and her songs

Whenever I reveal this not-so-secret fact about my life, people often ask me why exactly I like Taylor Swift so much. My answer? Why not?

Finding a Taylor song to like isn’t hard at all, and even the “Taylor haters” in my life acknowledge her musical prowess when it comes to crafting the perfect tune. I mean, there is a reason she’s won three “Album Of The Year” awards at the Grammys, and with three different genres at that. 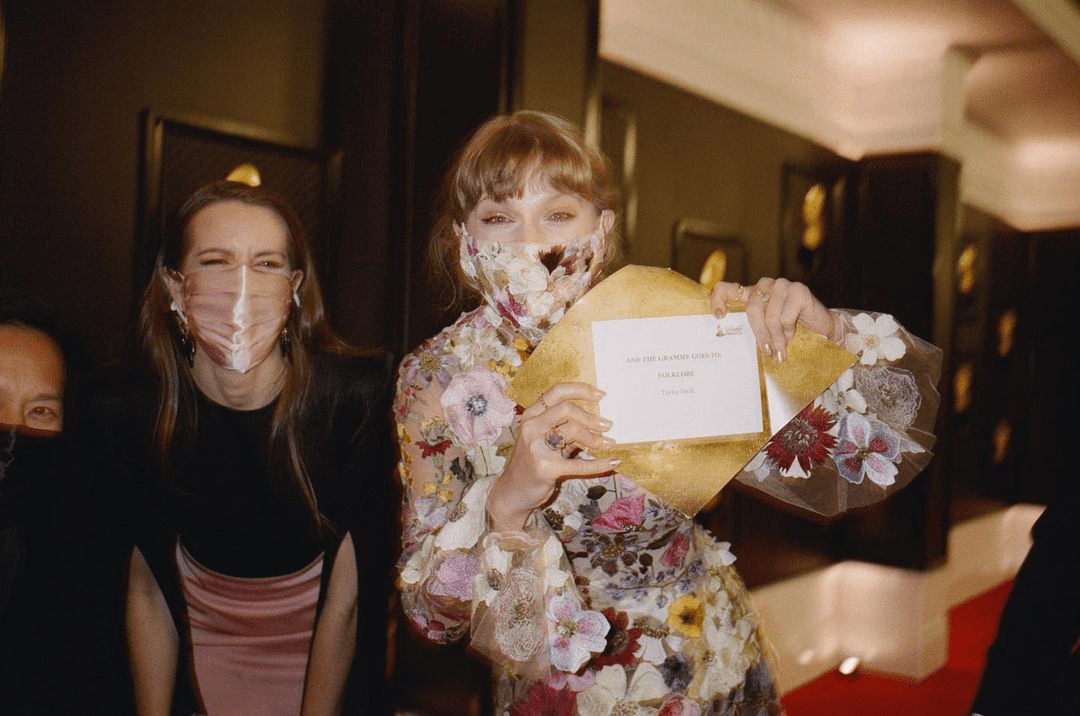 Taylor being an absolute #girlboss by becoming the first woman to win the coveted Grammys AOTY three times in 2010, 2016, and 2021.
Image credit: @taylorswift

But beyond her extensive list of awards and accolades, a big part of Taylor Swift’s allure boils down to who she is as a person – the cool and relatable girl-next-door. Emerging out of the blue during a time when manufactured pop stars were still ruling the charts, Taylor’s self-written lyrics and sweet disposition were like a breath of fresh air in the music industry. 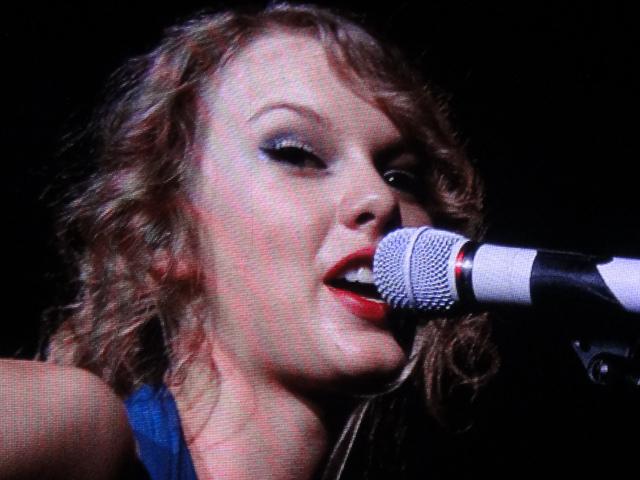 Taylor’s Speak Now album is completely self-written which is no small feat for a 21-year-old.
Image credit: Megan Kwek

To me, Taylor has always felt like a long-lost friend despite the 13 years that separate us. While friends have come and gone, she has remained a constant in my life, sharing little nuggets of wisdom through her lyrics and growing along with me.

I still remember blasting Mean through my earphones when kids at school would make fun of me, seeking solace in the fact that I wasn’t alone in my experiences. Or when I had to get out of a toxic friendship and playing Clean over and over again helped me to realise that everything was going to be okay.

Belting the lines “gone was any trace of you, I think I am finally clean” during her concert was also therapeutic to say the least. For any situation I faced growing up, Taylor had at least one song that perfectly described what I was feeling and no matter how rocky or dramatic my teenage years may have been, I was, at the very least, understood.

Besides inspiring me through her lyrics, she also taught me the importance of both intelligence and creativity. From picking up the guitar at 10 to discovering a love for writing, Taylor has influenced the way I live and who I am today. 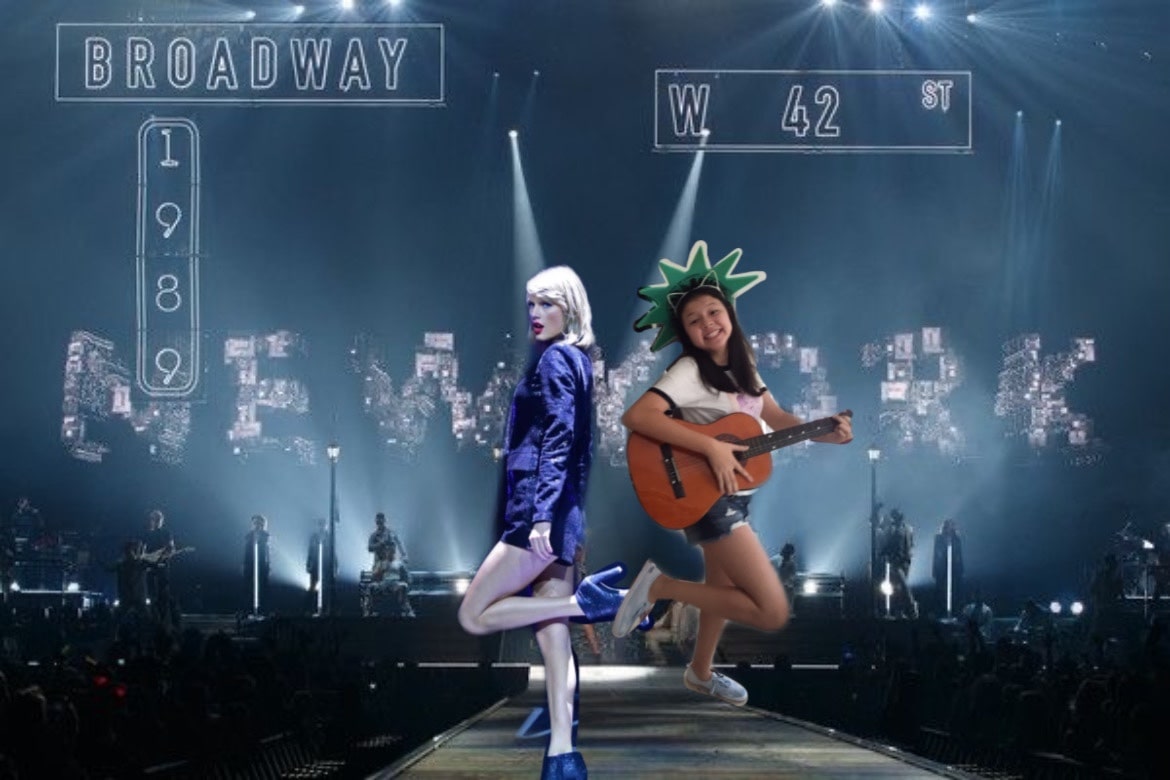 Taylor and I strutting the 1989 stage together, no big deal.
Image credits: Megan Kwek

Taylor’s grace and poise throughout her career has also made her a worthy celebrity for impressionable kids like myself to look up to. From her pivotal role in the fight for artists’ fair pay to her active involvement in the LGBTQ+ community, her influence has and will continue to help people all over the world.

Not forgetting the countless things she’s done to give back to Swifties, Taylor is famous for her fan interactions. Ever since her career started, she has been active on virtually every social media platform, reblogging and liking posts from fans during her #taylurking sessions. 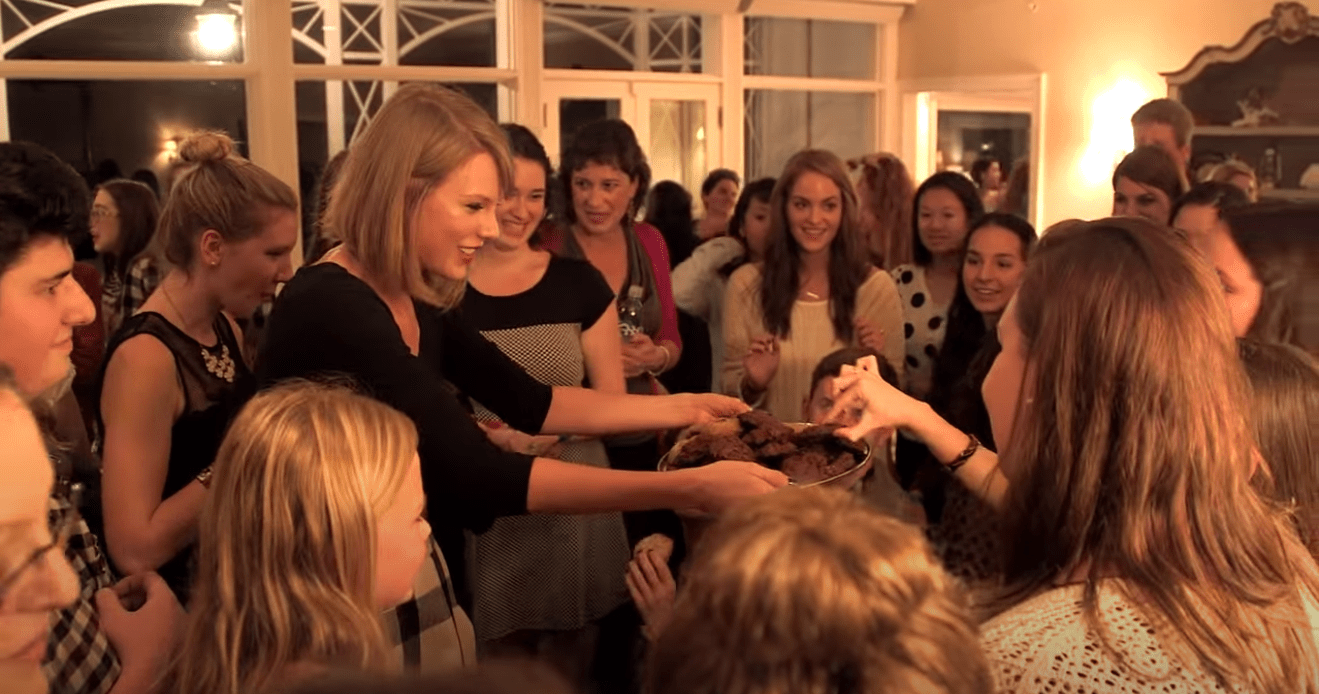 Even better still, there are even special Secret Sessions where fans are hand-picked by Taylor. During these highly coveted events, fans get to listen to her album before it’s released at her house, and take pictures with her and her cats – Taylor, hit me up for your next album please.

How the fandom changed my personal relationships

My family used to joke that I would be 30 and still listening to Taylor Swift – and it’s true. Whether directly or indirectly, my experiences as a Swiftie have quite literally changed my life, and I don’t see myself stopping anytime soon. 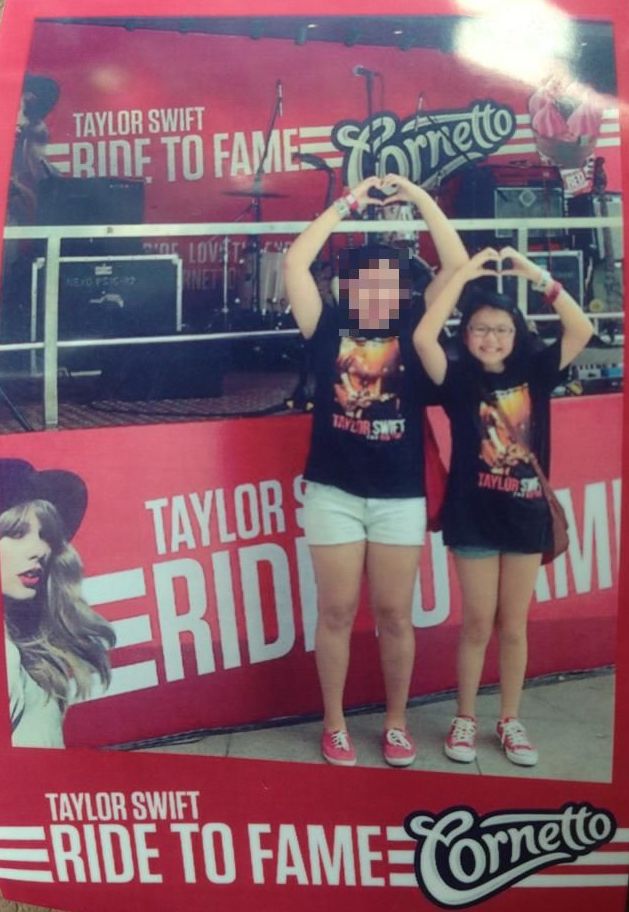 My sister and I would attend all kinds of Taylor Swift events together as kids
Image credits: Megan Kwek

Anyone with a sibling will understand the #struggle when it comes to getting along. But despite all the petty fights that my sister and I would get into, our love for Taylor Swift was the one thing that we could always get along for. Every single concert, album release, and Swiftie event was experienced together, and while we have grown up since then, this shared passion still remains.

Looking back, it was probably this interest that resulted in us becoming so close today. Sure, we’ve both made quite a few Swiftie friends, but the first person that we fangirl with is, and will hopefully always be, each other. 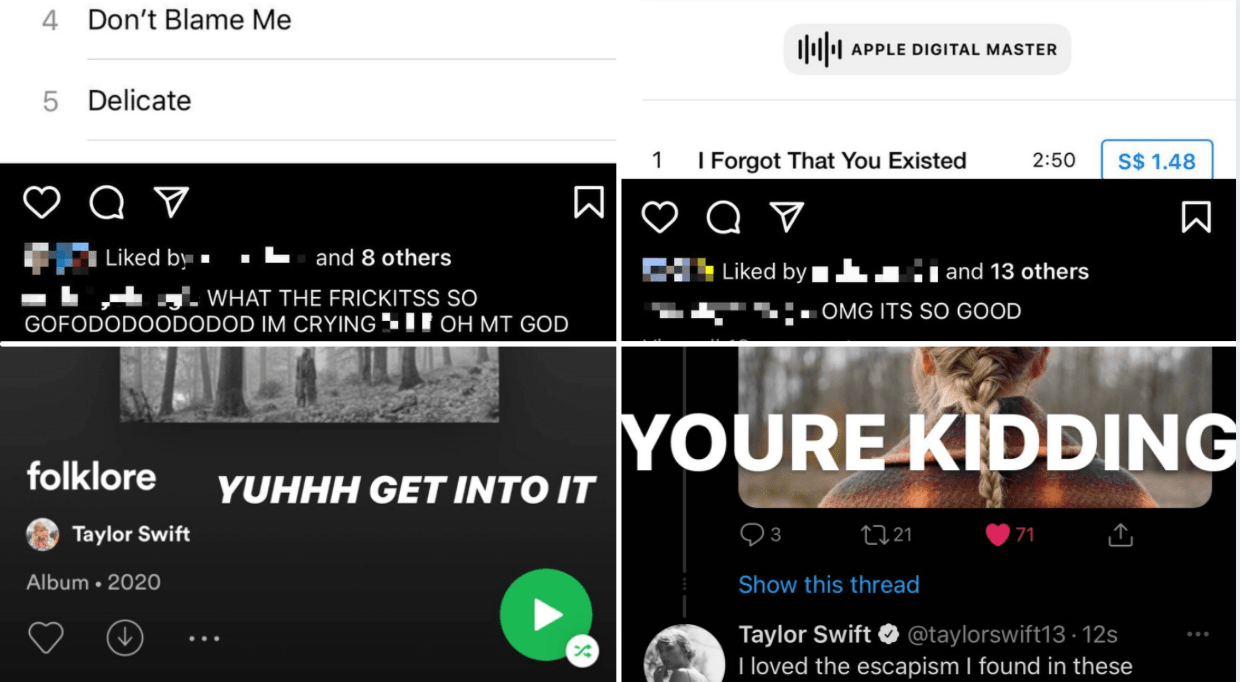 Plus, as a teenager-almost-adult, I also find myself even more drawn to Taylor’s lyrics – especially as her discography continues to grow. This formative era of my life is a fraught time, a dizzying span in which I’m trying my best to learn the ropes of adulthood. Taylor gives me a voice through her songs, poetically describing how I’m feeling at every step of the way.

Why I’ll be a Taylor Swift fan for life 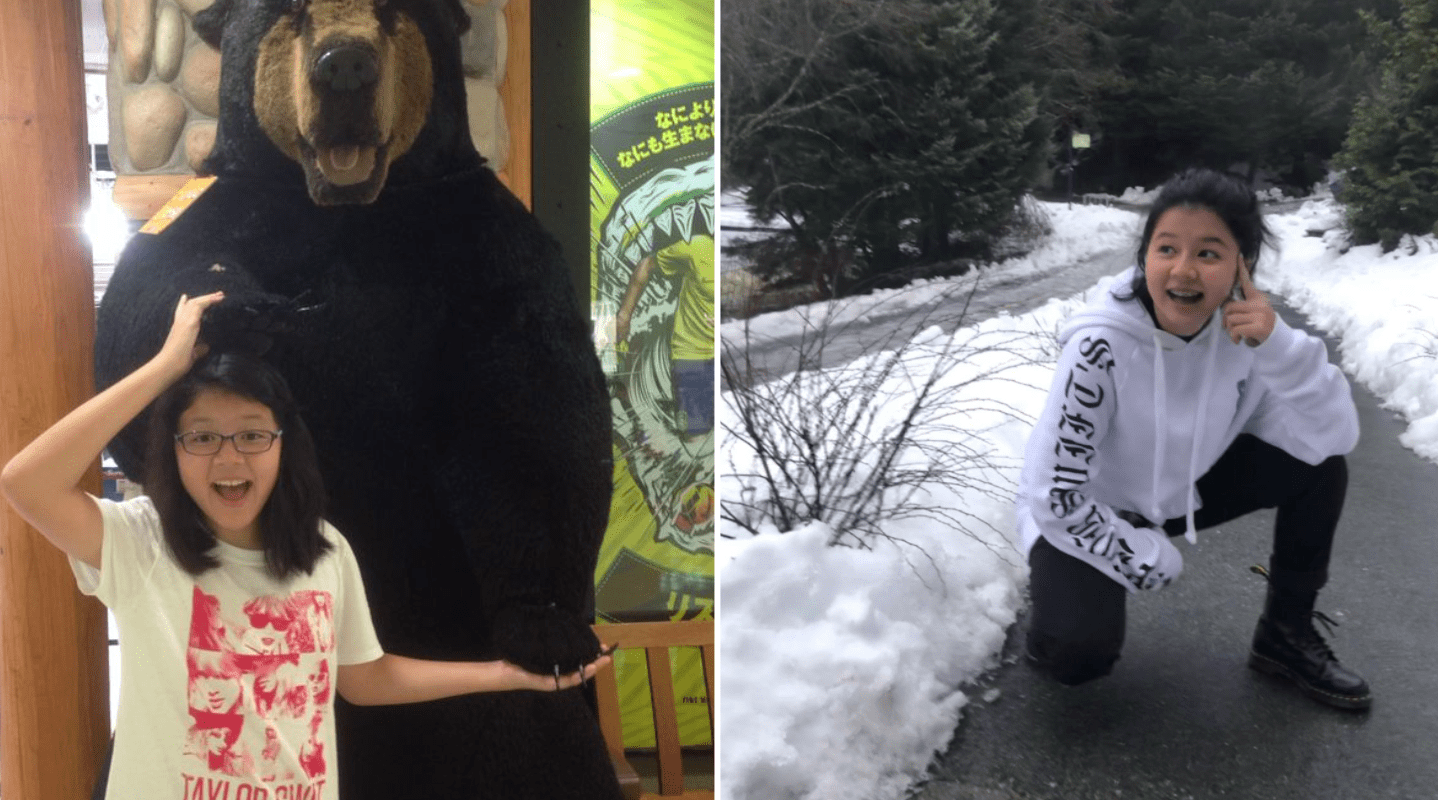 While Taylor may not know I exist just yet – hey, I’m being optimistic – my life as a Swiftie is far from being over. The appeal behind this pop star is simple: she’s authentic and makes some pretty great music.

Whether you’re in need of a good crying sesh or simply want to have a dance party in your room, she has a song for every occasion and for everyone. Some might mock me for being a part of this fandom, but as Taylor Swift once said, “I’m just gonna shake it off.”

Fandoms tend to get a bad rap from the general public, but just like how people stay up to watch a football match or queue up for the newest iPhone, everyone has something they love. No matter which fandom you may find yourself in, there’s no shame in supporting someone if it’s changed your life for the better.

Plus, you never know – this may even help you to make new friends and have experiences you would never have imagined in your Wildest Dreams.

Check out our other perspective articles here: 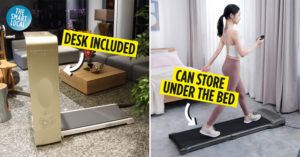 10 Best Treadmills In Singapore For A Quick Indoor Run Without Leaving Home
8 Top Job Search Mistakes To Avoid At Every Stage Of The Hunt, As Shared... 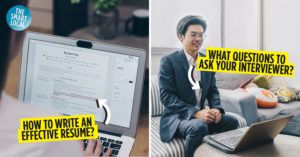