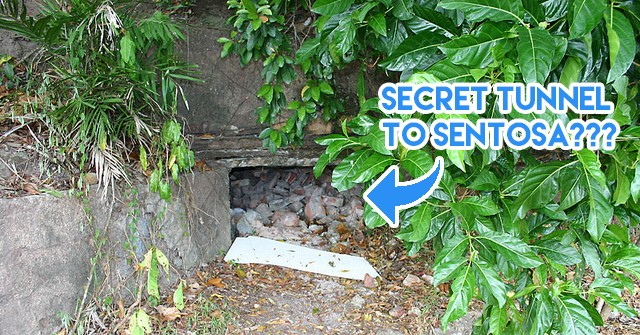 Conspiracy theories. Some thrive on ’em, some are skeptics. But they go beyond the possibility of Beyonce being the Illuminati kween, and the government being run by a horde of lizard people – and Singapore isn’t spared either.

From our stray cats being spies for the government, to top-secret tunnels running beneath us, here are eight strange conspiracy theories Singaporeans actually believe:

1. Spy cameras are installed in our stray cats 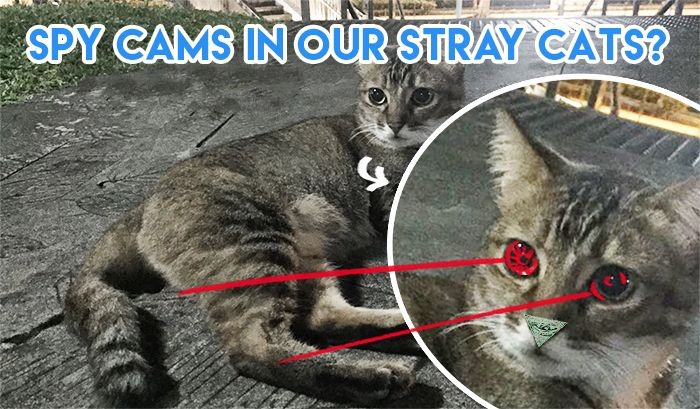 This theory all started from a sharp-eyed netizen who noticed that the number of visible CCTVs around neighbourhood estates have been dwindling over the years.

“Better for our security what!” you say.

But wait. The cameras haven’t just been “disappearing” – they’ve apparently been installed in the most unexpected places: our stray cats. The theory goes on to say that these furry critters have been implanted with “nano cameras”, making spying on unsuspecting passers-by an easy task.

This one Reddit user seems to be on to something:

2. Mas Selamat was dead even before his “escape” 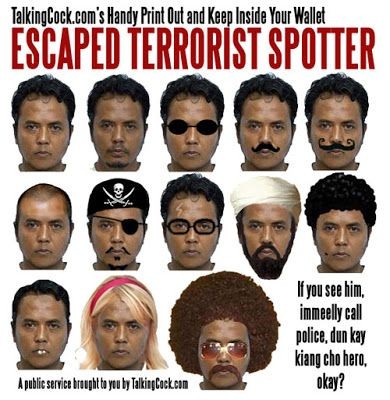 Singapore has seen many a wanted man; Adrian Lim, the filthy con-man who murdered 2 children in cold blood. Gang leader Tan Chor Jin, better known as the One-Eyed Dragon, who shot a man to death. And then we have Mas Selamat, the toilet-vent escapee.

Call it a sh*tty situation, but his escape in February 2008 led to the largest manhunt in Singapore’s history. But though his subsequent arrest in 2009 put rest to the situation, skeptics were still, err, skeptical. Some felt that the reported “escape” was just a ruse to cover up the fact that he’d been killed while in detention.

On the other hand, others believe Mas Selamat could have been (and still be) either one of these things:

3. Labrador Park has a secret underwater tunnel that leads to Sentosa 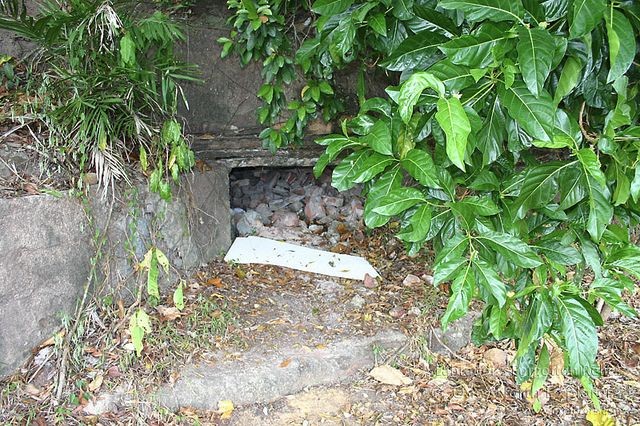 I mean, not like we already have a convenient tunnel system into Sentosa or anything, but Labrador Park is rumoured to house a ~secret underwater~ tunnel that’ll bring you straight to the State of Fun – Indiana Jones style.

Legend has it that when the British built the Labrador Battery in 1939, they also constructed a tunnel to access Fort Siloso. However all bunkers were sealed in the 1950s, and the tunnel’s interior has since collapsed. 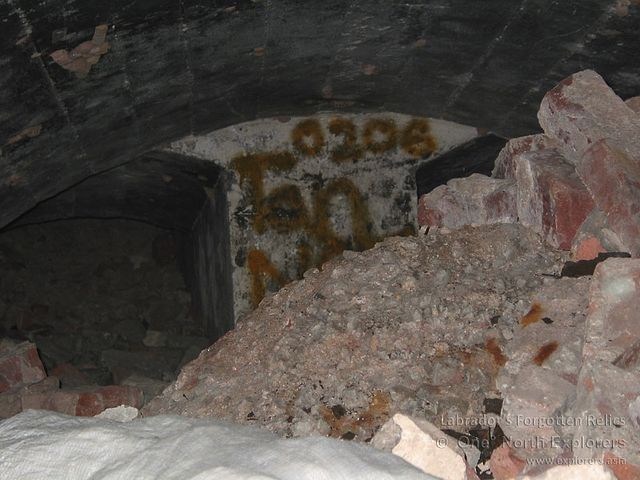 The tunnel’s interior – where does this go? Image credit: Urban Explorers Asia

The sealed entrance can still be found, though no one truly knows the real reason behind it, and if this is the entrance to the #1 express route to Sentosa – confirm no jam here, that’s for sure.

Late MM Lee’s former residence has had it’s fair share of shenanigans last year, and there’s another one to top the list. Here’s the scoop: A secret tunnel lies under 38 Oxley Road, which is used to avoid heavy traffic to get to the Istana. 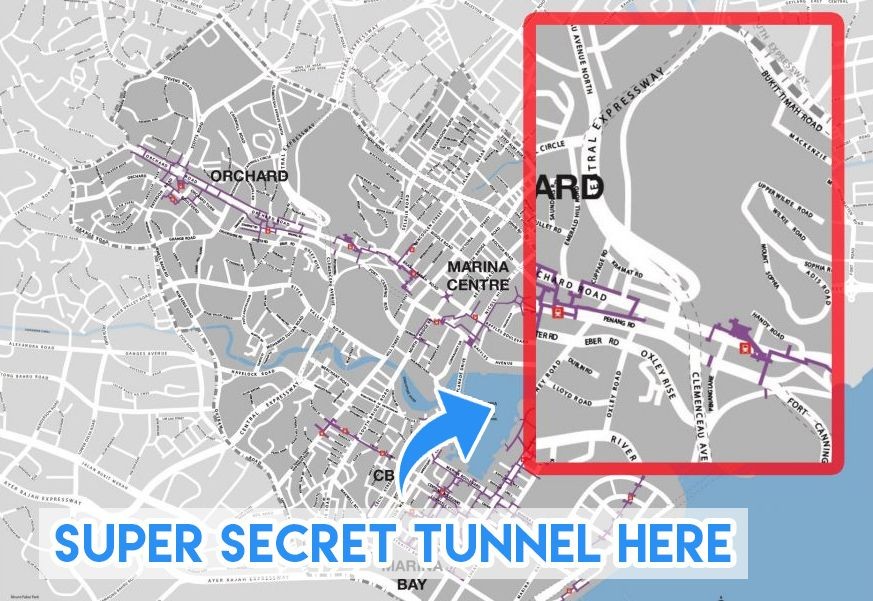 On Quora, a certain Sean Lee debunked this piece of information, stating that the area simply has no space for this alleged top-secret passageway. And even if there was one, it would have been extremely costly and time-consuming to build.

4. Benjamin Sheares Bridge is made from human bones 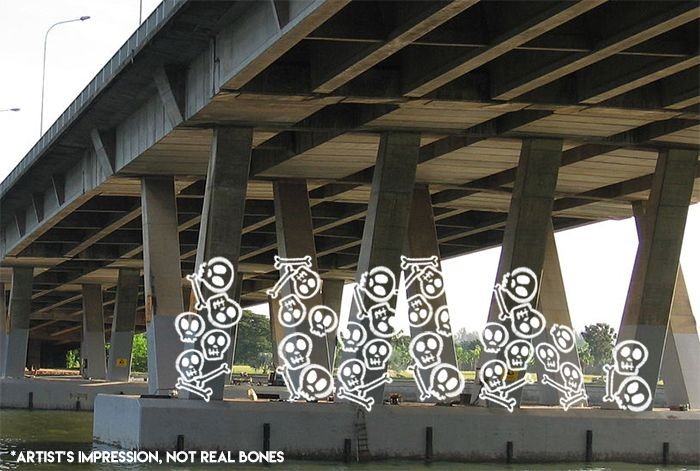 You heard it here folks: We’ve got a bridge of bones, right in the heart of the city.

The conspiracy sparked during the bridge’s construction in the 1970s  – a time when child kidnappings were rampant across the country. The theory alleged that Sheares Bridge was built using the bones of children as a base. 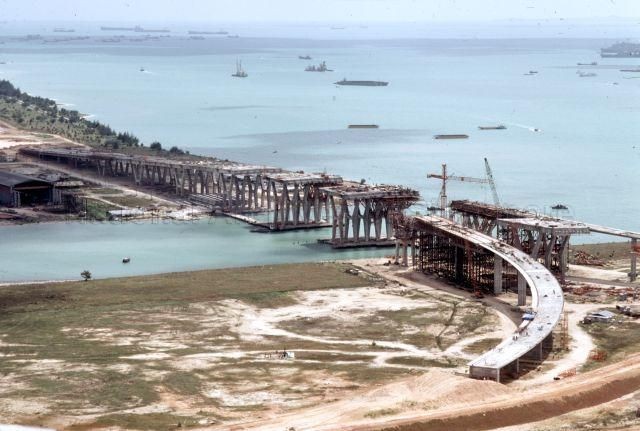 The construction of Benjamin Sheares Bridge

Many felt that this was propaganda to decrease the number of kidnapping incidents, as this fear-mongering tactic ensured parents were more careful not to let their children wander around alone. Some even believed that a dog-headed man was responsible for the kidnappings. Welp!

The shenanigans don’t end there either. A bunch of friends allegedly found a “human skull” in the waters under Sheares Bridge in 2013:

5. It never rains on National Day because of cloud seeding

I’ll admit, the fact that it hardly rains on National Day has made me suspicious that weather modification techniques have ensured sunny skies on 9th August yearly. This running joke has been going around enough for Gov.sg to set up a page just to dispute this.

Cloud seeding isn’t as mysterious as it sounds though – it’s just modern technology that some countries around the world actually use to help prevent or induce rain/snow.

And because I’m no scientist, here’s a diagram that explains how it works: 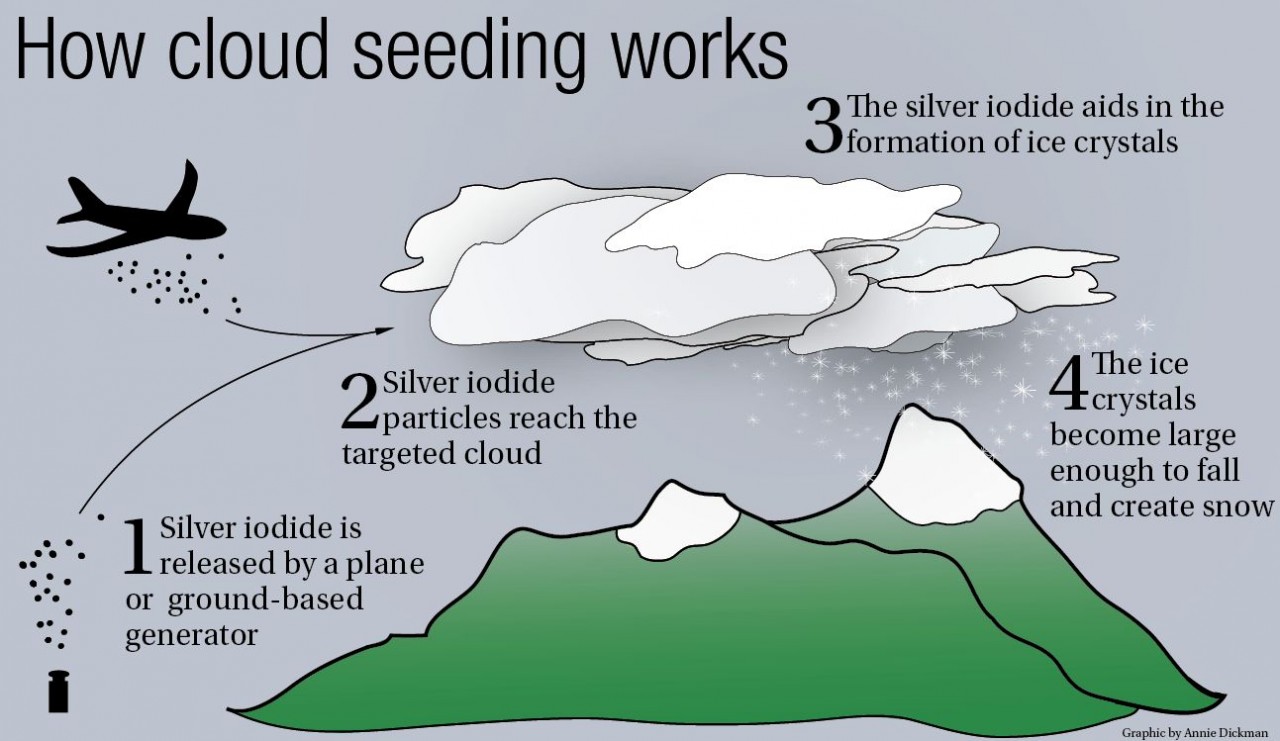 But whether or not we’ve been using science to play God, we can be thankful that we’ve been able to enjoy good weather during NDP almost every year…sOmEhOw.

6. Aliens have been flying over Singapore for years

Aliens. No conspiracy list would be complete without the mention of the extraterrestrials, which have been quite fond of Singapore it seems.

One ex-SAF personnel risked his life to share his story, claiming he was forced with several other pilots to attend to frequent UFO cases with their fighter jets. He went on to mention that he had been sworn to secrecy, and could face the death penalty for going public with the information. Gulp.

Crazy story aside, most of these UFOs turn out to be nothing other than military blimps, or even the Starhub Lightship. 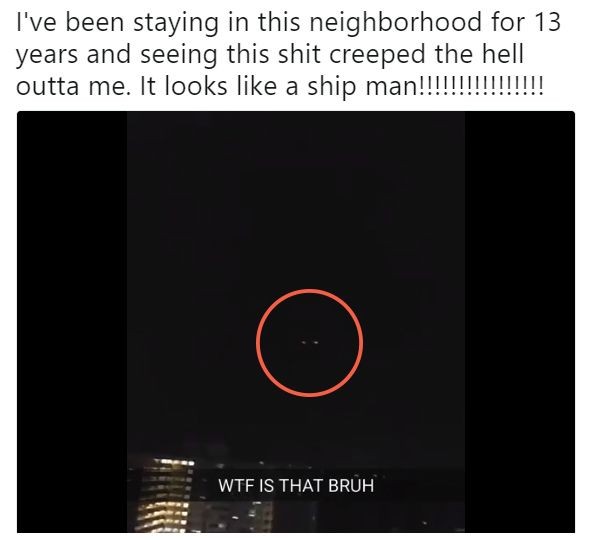 One netizen got spooked by an RSAF military blimp in February 2013.

But aliens or nah, I hope they left after trying some chilli crab at least.

7. There is a “phantom” MRT system being built underground 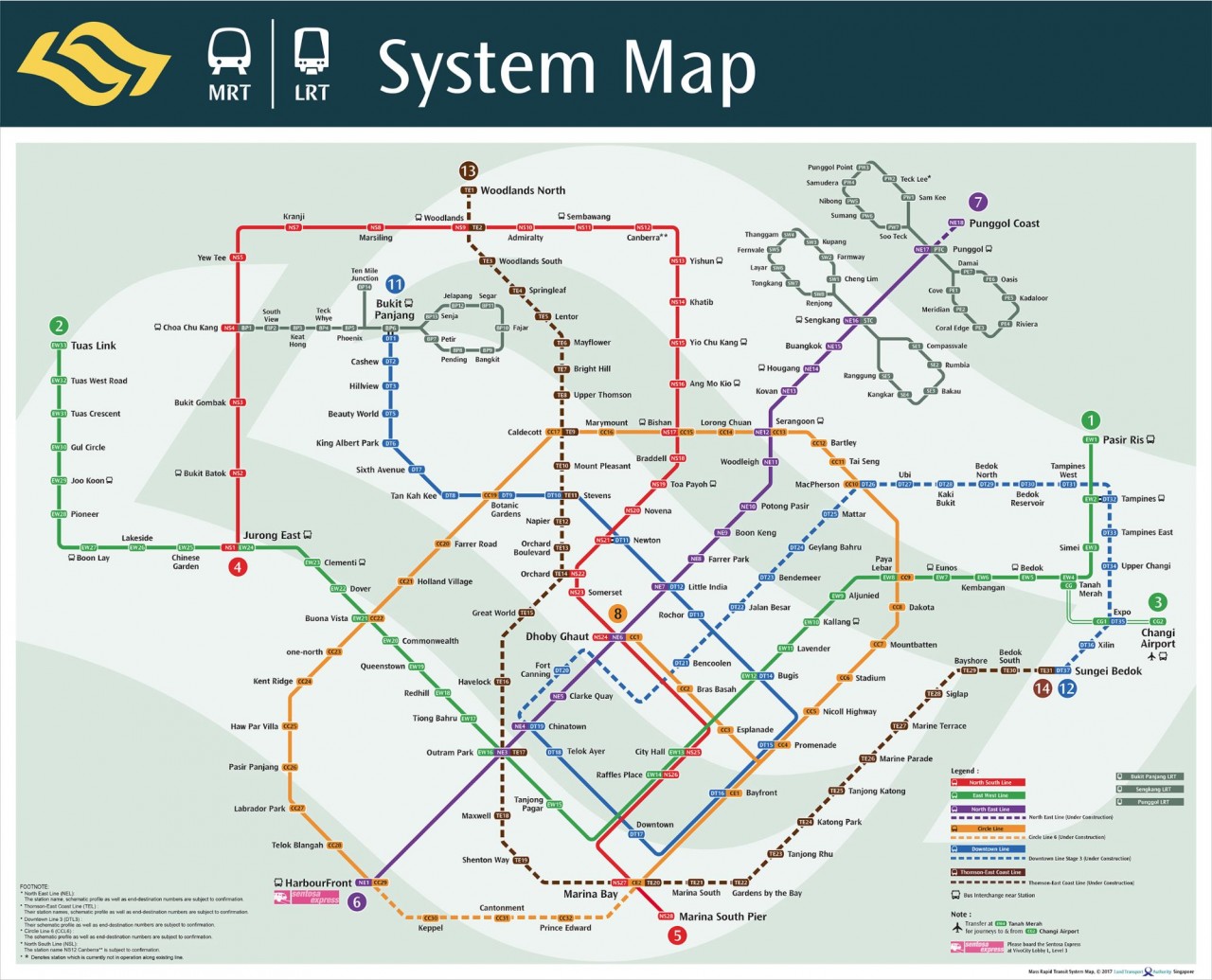 Is there more than meets the eye? Image Credit: LTA

Is the train breaking down a perfect metaphor for your life? Does the break between Yishun to Khatib waste 4 whole minutes of your time?

Don’t even worry about it, because it seems like we’ve got a whole new bunch of lines coming up – we just don’t know it yet. These “phantom” stations and tunnels supposedly sit empty for decades, until a route that can be “assigned” to them is in function.

There have been rumours of ION Orchard having a secret train station sitting beneath it, with others are peppered around the country in places like Punggol, Ang Mo Kio and Changi Airport.

Heck, we might be having an underwater MRT to Pulau Ubin in the works for all we know! 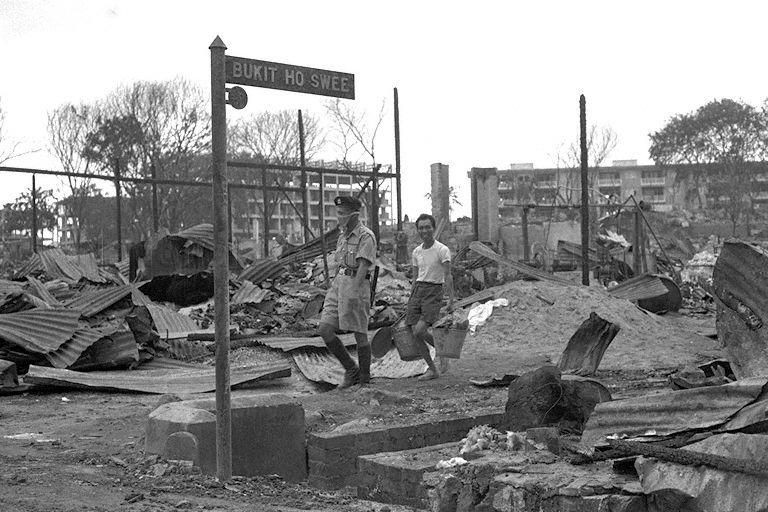 If you’ve paid enough attention during Social Studies class, you’d know that in 1961, a major fire broke out in Kampong Bukit Ho Swee. This inferno wiped out more than 2,800 houses, leaving 54 injured and 4 dead, securing its title as Singapore’s biggest fire disaster of all time.

For years the true cause of the fire remained unknown, and was chalked up to fire hazards that were rampant in villages, like flammable attap roofs. This eventually led to “emergency” redevelopments in the area – Singapore’s first public housing project.

Here’s where things start getting a lil’ fishy. As many of the villagers were swiftly rehoused in new flats that had sprung up, many believed that the fire was caused on purpose in order to chase out stubborn residents who’d refused to move out of their kampong, hindering the plans to redevelop the estate.

While traversing the depths of the interwebs, I chanced upon one last “conspiracy” I knew I had to include:

Here’s what an actual Yishunite had to say about this: 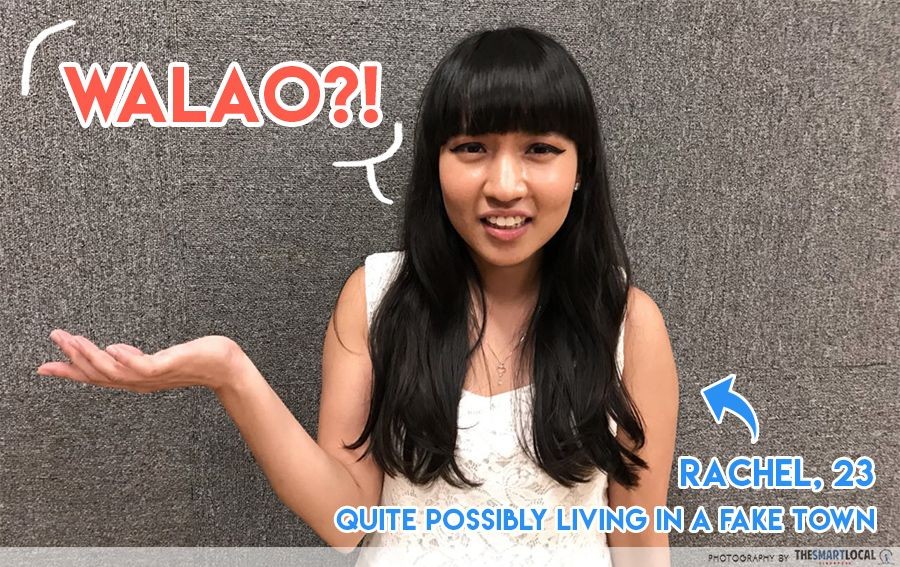 So what is it, a mirage? A ruse? One giant VR zone? Who knows…

In the words of the great Oprah Winfrey: So what is the truth?

Me @ this article. Image Credit: Tenor

Well, no one really knows. But whether you’re a skeptic or a believer with your own theories, these conspiracies will send questions flying for sure. So is it all just a bunch of baloney?

Put on your tin-foil hats my friends – I’ll let you be the judge of that.

Let us know the craziest or funniest Singaporean conspiracies you’ve heard in the comments below!