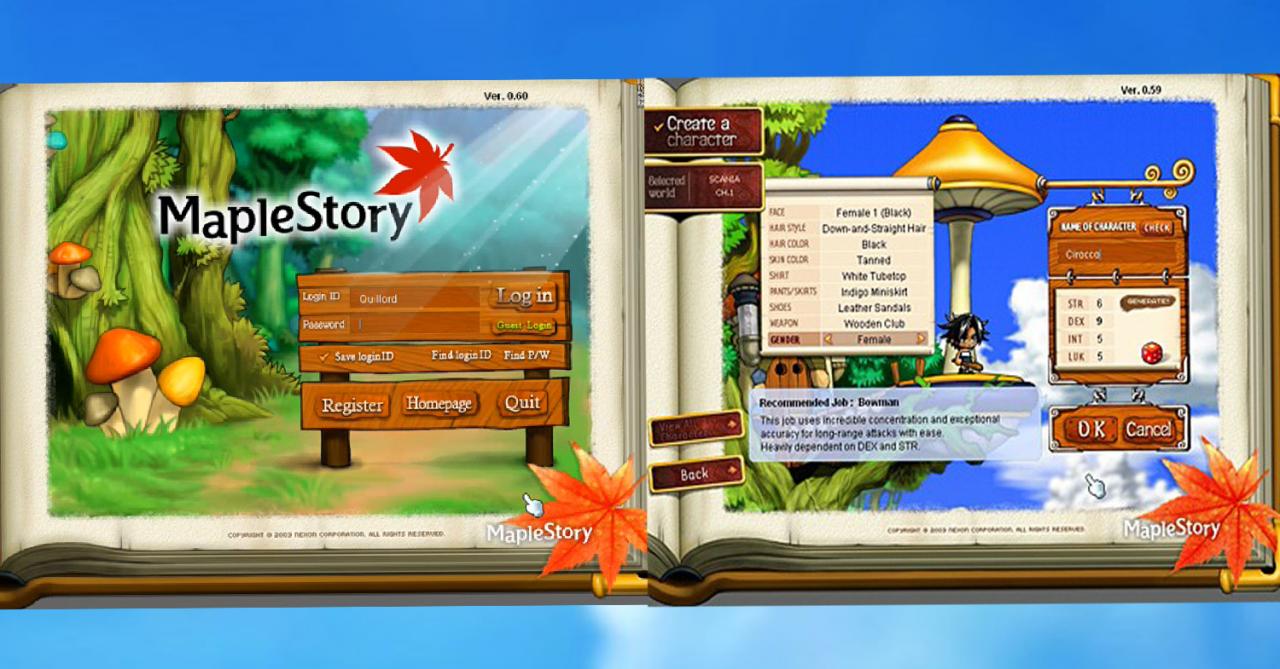 If you were a Singaporean growing up in the 2000s, names like Runescape and Raganarok Online marked a new era of new MMPORG PC games. But there’s one game that became a full-blown craze since being launched in 2005: MapleStory.

The 2D side scroller took our hearts by storm with its colourful graphics and chibi-esque charm, and soon became a huge part of many of our childhoods. And with the latest hype around MapleStory M, we can’t help but reminisce about the older version of the hit game.

From being a kanchiong spider at Kerning PQ to casually creeping on the one and only MrYaNdAo – take a walk down memory lane with these 10 experiences so distinct to the OG Maple, which the MapleStory of today just doesn’t quite capture.

The Kerning City Party Quest (PQ) was the thing to do for quick level-ups, where a party would have to go through several tasks like killing Crocos, solving puzzles, and defeating the King Slime. A single round of this 30-minute mission would easily up rack up your EXP by 15%. 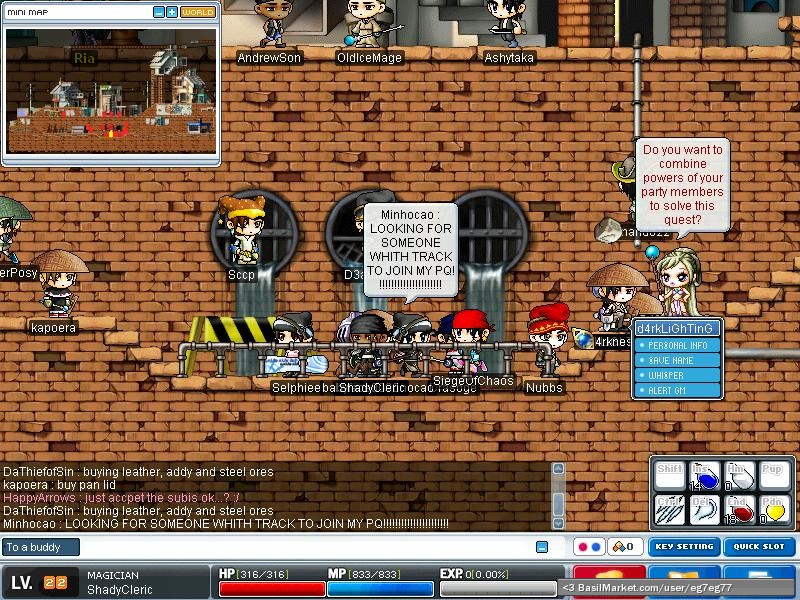 Players would pitch their virtual chairs along the 3 drain holes beside Lakelis in hopes of gaining entry to the party.

But just like at any exclusive club along Marina Bay, getting past the bouncer Lakelis to begin your quest was a challenge. Gaining entry was basically a game of “fastest fingers first”, where we’d have to fire a barrage of “left click + enter” combos at Lakelis just so we didn’t miss an opening after the previous party had exited the quest. 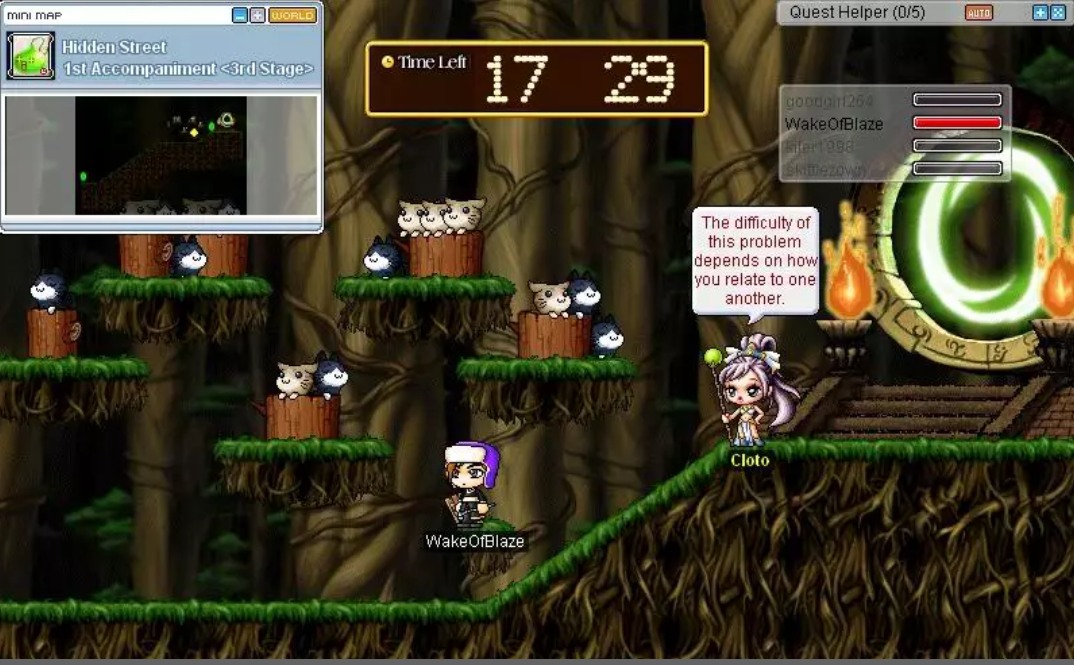 For the tech savvy, “cheating” your way in with an auto-click bot was a thing. For those sharp-eyed or well connected, tracking a specific member from an on-going party’s progress with the “/find” function – to gauge how long you’d have to wait to get in – also did the trick.

From happiness to anger, displaying emotions in-game was as simple as clicking the “F1” to “F7” buttons on the keyboard – where character avatar faces would change accordingly in expression.

One thing that MapleSEA did so successfully was to transcend the boundaries of its 2D landscape into everyday life – by means of speech. The iconic “F3” and “F5” faces became a colloquial lingo among the primary and secondary school crowd.

3. Saving up pocket money to buy @Cash prepaid cards at 7-11 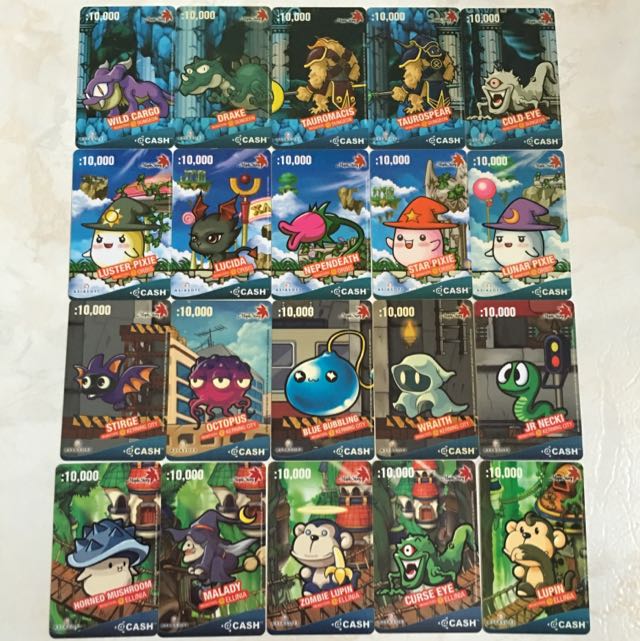 Separate from the in-game currency, Mesos, @Cash credits required spending actual money to purchase in-game items. Despite a prepaid card being about $10.50 a pop, students managed to scrounge up change to get them.

These items rarely had any in-game perks and were mainly a show of affluence. Popular purchases included clothing and pets – as well as beauty coupons to get the Rose or Metrosexual hairstyle if you were a high SES Mapler.

Despite the items only lasting 90 days (apart from the hair), the physical plastic cards themselves were also worth collecting because they doubled up as trading cards of sorts – each sporting designs bearing Maple monsters. I vividly remember exchanging 2 days’ worth of pocket money for an EMPTY prepaid card just to complete my collection.

An indicator of popularity, MapleStory’s fame functioned like Facebook likes for your avatar – except you could increase the fame of only one person each day. 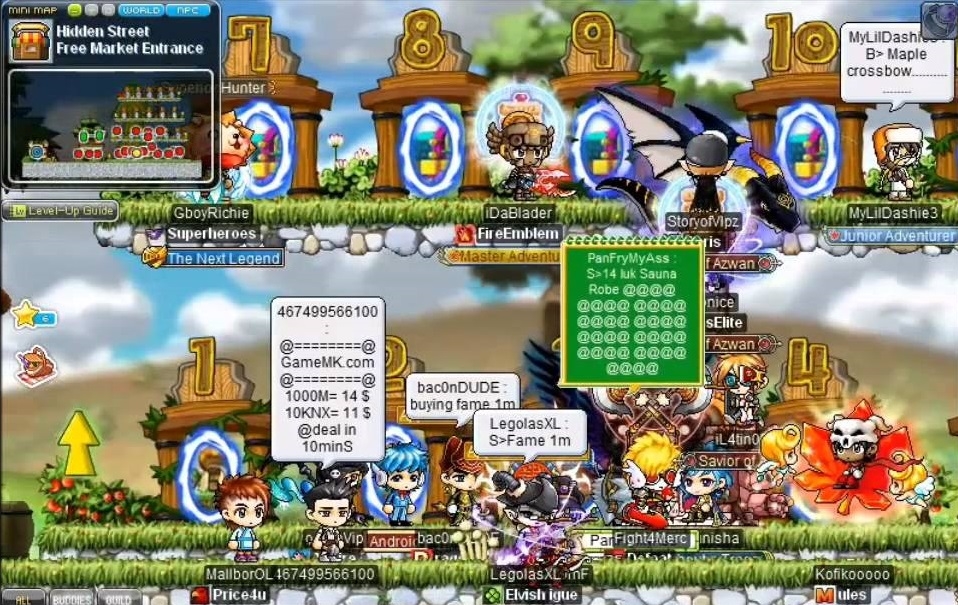 For the lower level Maplers, selling fame was an especially lucrative form of money making because it required little to no effort other than spamming “S> FAME 500k @@@@@@@@@@” in the Free Market. The more “@”s the better because it gave your chat bubble more visibility.

But as with any business dealings, there were always risks involved – such as fame scammers with messages like “B> fame 1M”. After upping the buyer’s fame, these scammers would immediately log off never to be found again. Or if they really had no shame, they would smugly state 1M = 1 meso *insert F3 face here*. 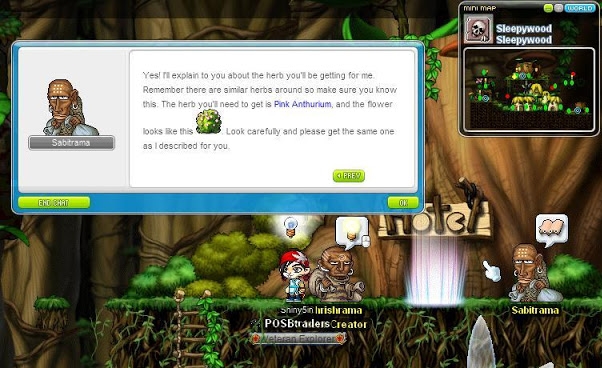 A moment of silence for all our fallen comrades who never completed the Sleepywood Jump Quest with Sabitrama. Oh, the countless rage quits and hours spent smashing the keyboards just to retrieve a mystical cure-all flower. Not forgetting the deceptively cute spiky balls that’ll knock you off the platforms.

Then again, all the hard work was well rewarded upon completion of quest, with a rare armour scroll to zhng your equipment with.

6. Maple BFs/GFs, and getting married for the freebies

The perks of getting together in MapleSEA were tremendous especially for females…or males masquerading as females behind their avatars *ahem*. 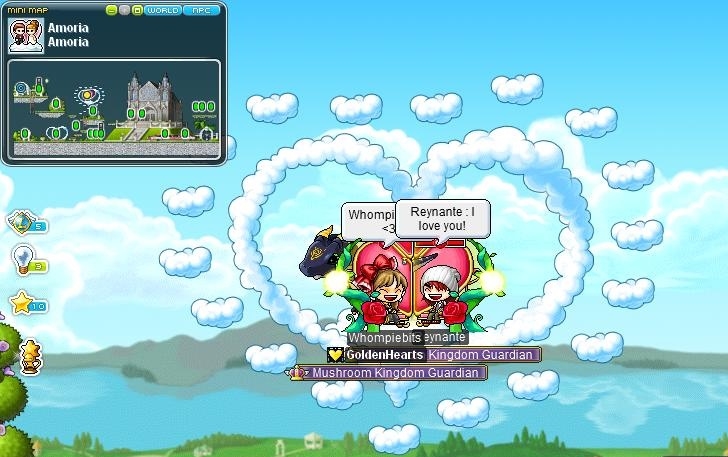 Duties of a Maple GF included responding to random jokes with the F2 or F3 face, partying your S/O during training sessions and receiving a multitude of freebies like equipment and @-Cash gifts from your doting Maple BFs. With all those perks, taking on multiple BF/GFs was a very common practice: one for the day and another for the night to really maximise that “double drop rate” ( ͡° ͜ʖ ͡°). 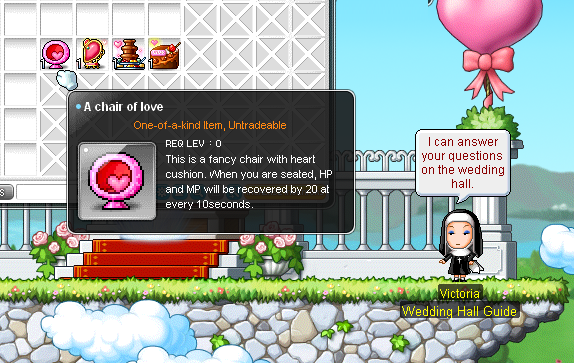 Some Maple couples even went the extra mile to get hitched in-game, which could cost up to $35 in @Cash.  There were also perks like sending wedding e-vites to your buddylist friends, wearing the in-game wedding outfits and cute wedding couple chairs, nuff said. 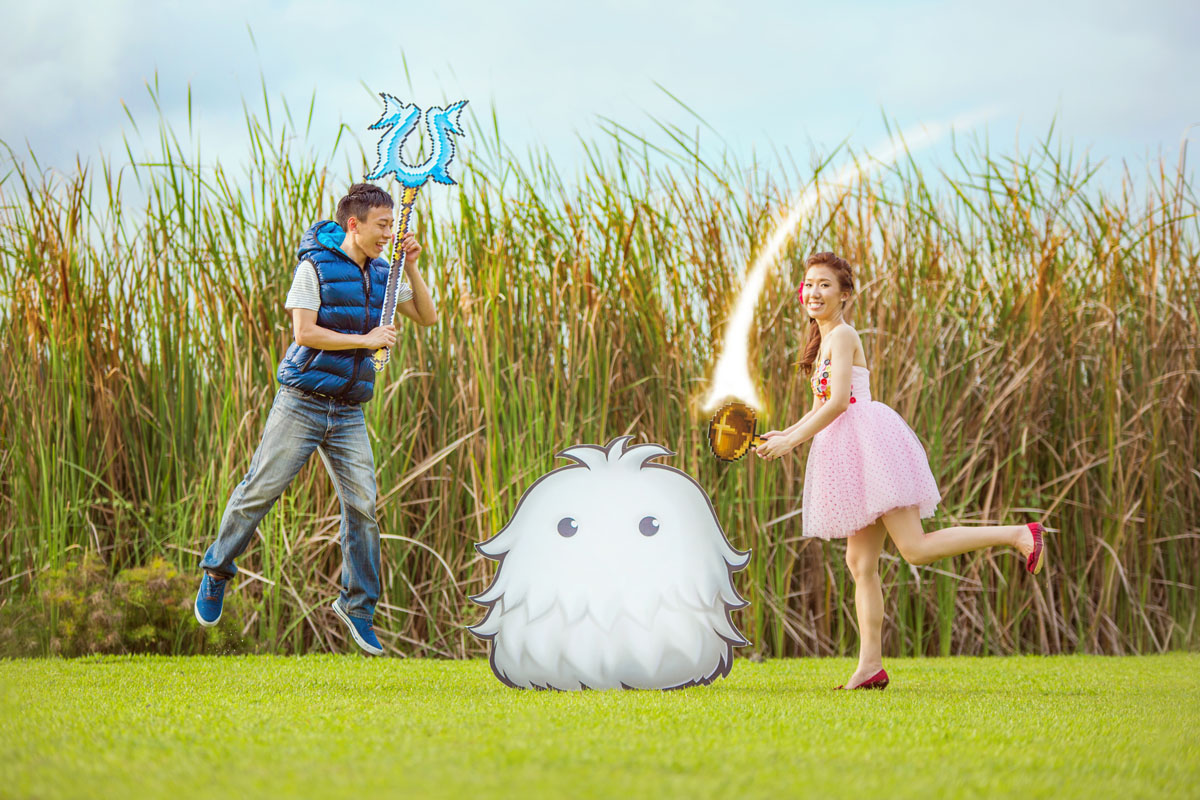 Saying that levelling up was hard back in the day is an egregious understatement. Leveling up meant mindless hours spent in front of the screen repeatedly clicking “X” and “Z”. 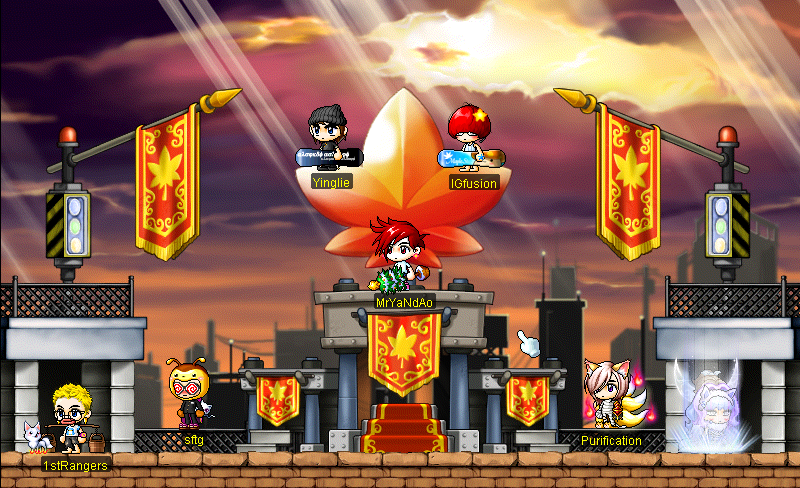 MrYaNdAo was THE icon of MapleSEA, being the first Singaporean Mapler to reach level 200. Even those who never played the game knew of his existence.

We can’t confirm this, but legend has it that he owned a LAN cafe and had a crew of 4 who was constantly on the grind to help him gain EXP for his character. Other legends include the likes of Shadowsin and Jessbunny. 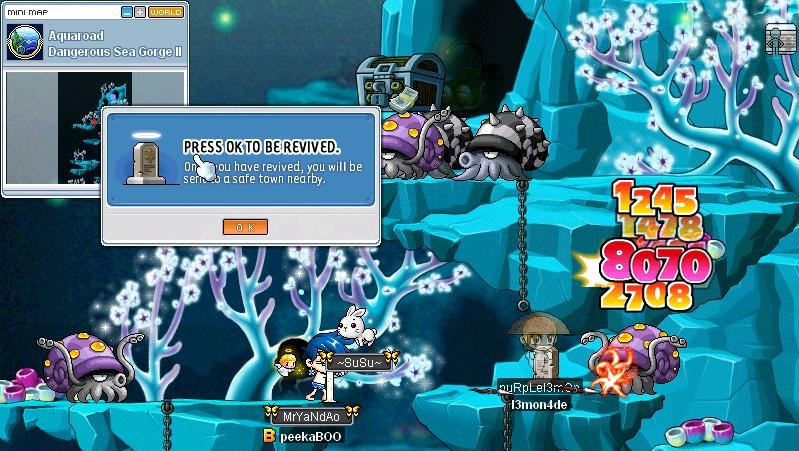 Fans and kaypohs alike used the “/find” function to see the legendary player in action, only to find themselves knee deep in shark infested waters.

Getting the last hit on a monster meant you got to attain all the EXP points – even if someone else was dishing out a majority of the damage before you walked into the picture. It was an unspoken rule in Maple: if you see someone already dealing with a particular monster without needing help, don’t interfere. No one appreciates a “stolen” kill. 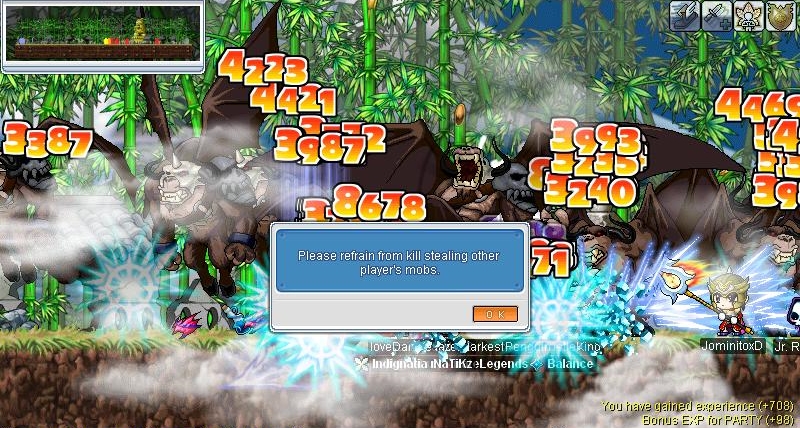 Enter the Coolie Zombies Mines or Mixed Golem Maps and you’d have basically entered a live warzone of Maplers battling for prime hunting spots – with mini-earthquakes, rumbling screens and a mad dash of people trying to get the last hit. This, my friends, were the “Kill Steal Wars” – especially prevalent in channel 1. Several guild wars have started because of this.

The less confrontational would type “pls cc” along with an F4 face in hopes of persuading the map invader to try another empty channel – and avert a potential disaster.

9. Waiting for the ship to Orbis and avoiding the Crimson Balrog

Like a teen reaching puberty, hitting level 30 makes you realise you’re restless with your current environment. The Green Mushrooms at Training Fields 1 no longer quench the thirst of your ever-growing EXP bar. So you leave the nest of Victoria Island, in search of bigger adventures in Orbis. 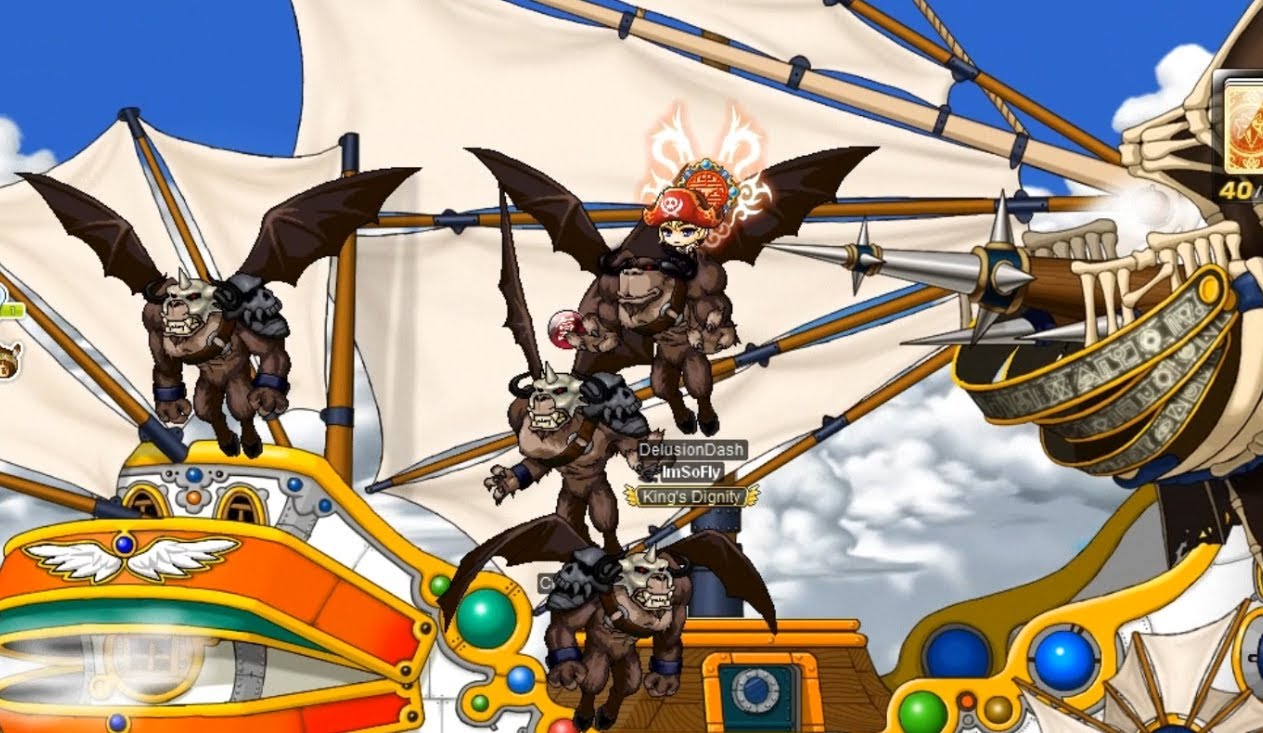 And with every coming of age story, the transition is fraught with ups and downs. Just take for the excruciating 15-minute wait for the Orbis ship to arrive.

Hiding in the cabin from the Crimson Balrog.

Don’t forget the fact that you can’t go AFK even after the boarding the ship. Oh no siree, you’d have to go to the lower decks to hide unless you want to get mauled by the band of Crimson Balrogs – and respawn back in Victoria.

10. Praying the internet doesn’t die out during the 5 hour client download time

Lastly, who could forget the insanely long game client download times. The 4GB mammoth of a file took a day to download because there was no such thing as a 100gbps line back then. 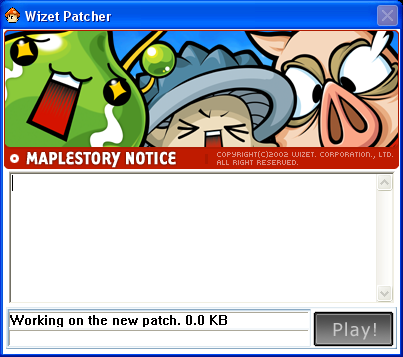 The wait for game patches was as equally nerve racking, as we prayed for the client not to crash. And I’m sure I’m not the only one who’s experienced the progress bar stalling at the “Char.wz” and “Map.wz” files for no apparent reason.

But after all that’s said and done, getting to click the bright blue “Play” button made it well worth the wait. 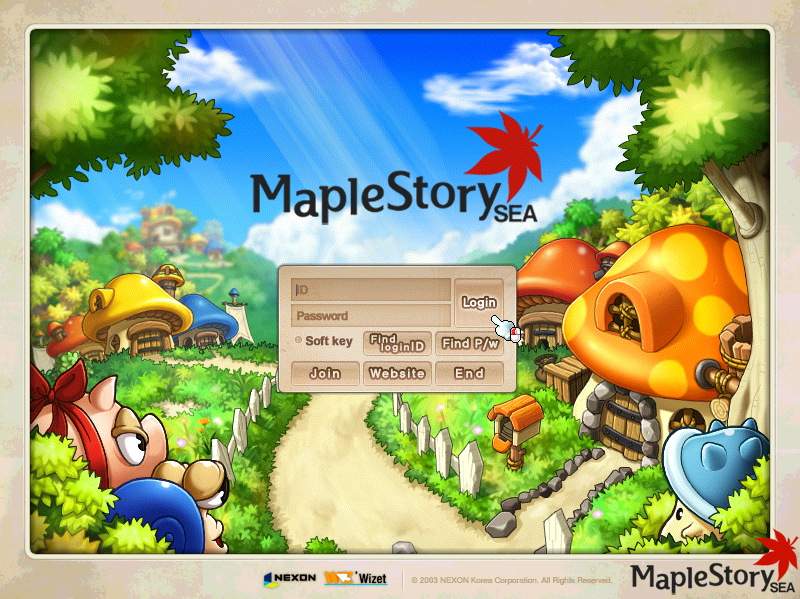 With the latest update of MapleSEA: Monad and the launch of MapleStory M, MapleStory has changed since our primary/secondary school days. The addition of 25 more job classes, introduction of 5th job advancement and 30 new maps almost makes it unrecognisable.

But whether it’s stalking MrYaNdAo or trading prepaid cards with our friends, what still remains after all these years is the lasting friendships and fond memories that MapleSea had given us *F2*.

Check out these articles for more nostalgia: 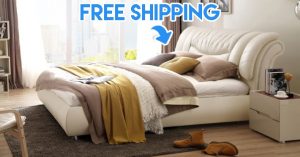 Taobao’s Tmall Is Having A Furniture & Household Appliances Sale With Flash Deals Starting From 1.1RMB (~S$0.22)
15 Things To Do In Switzerland For Travellers Visiting For The First Time 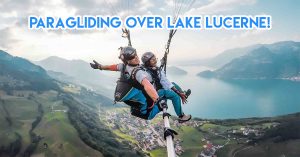