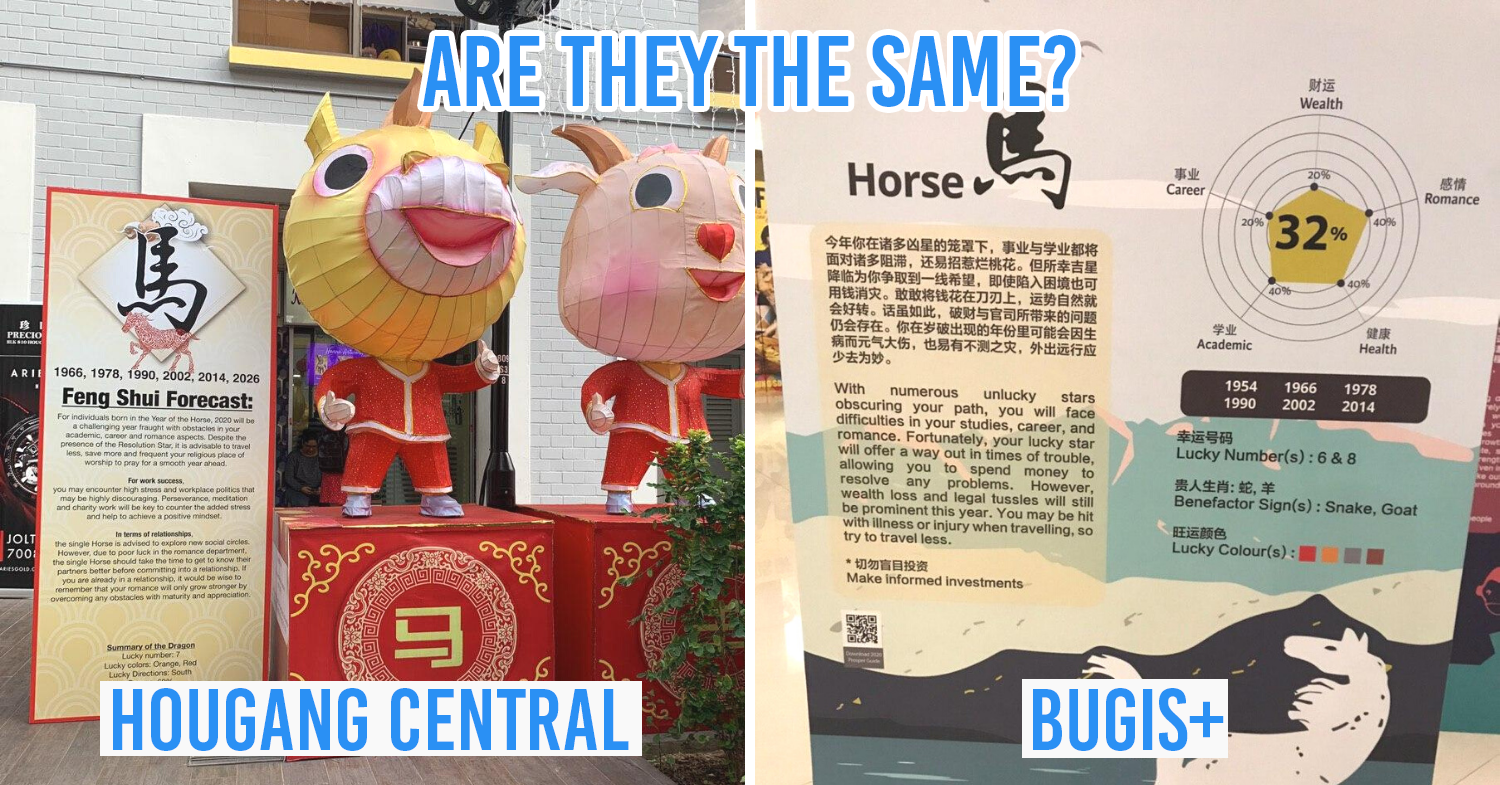 Before our body clocks can even fully adjust to a whole new decade, another New Year is on the horizon: Chinese New Year. And while the festivities bring pineapple tarts, angbaos and OOTDs for the ‘gram, it also heralds change in the form of Zodiac predictions categorised by things like “Wealth” and “Love Life”.

Even if you are sceptical of the huge boards at nearly every mall in the lead-up to CNY telling us the future, it’s hard not to stop dead in our tracks to have a peek and hold high hopes that this year will finally be our year. After all, it’s second nature to be obsessed with horoscopes in today’s society.

Here’s a roundup of what to expect in the Year of the Rat, from various boards all around Singapore so you can get an overview of your 2020:

Read our other CNY-related articles here: 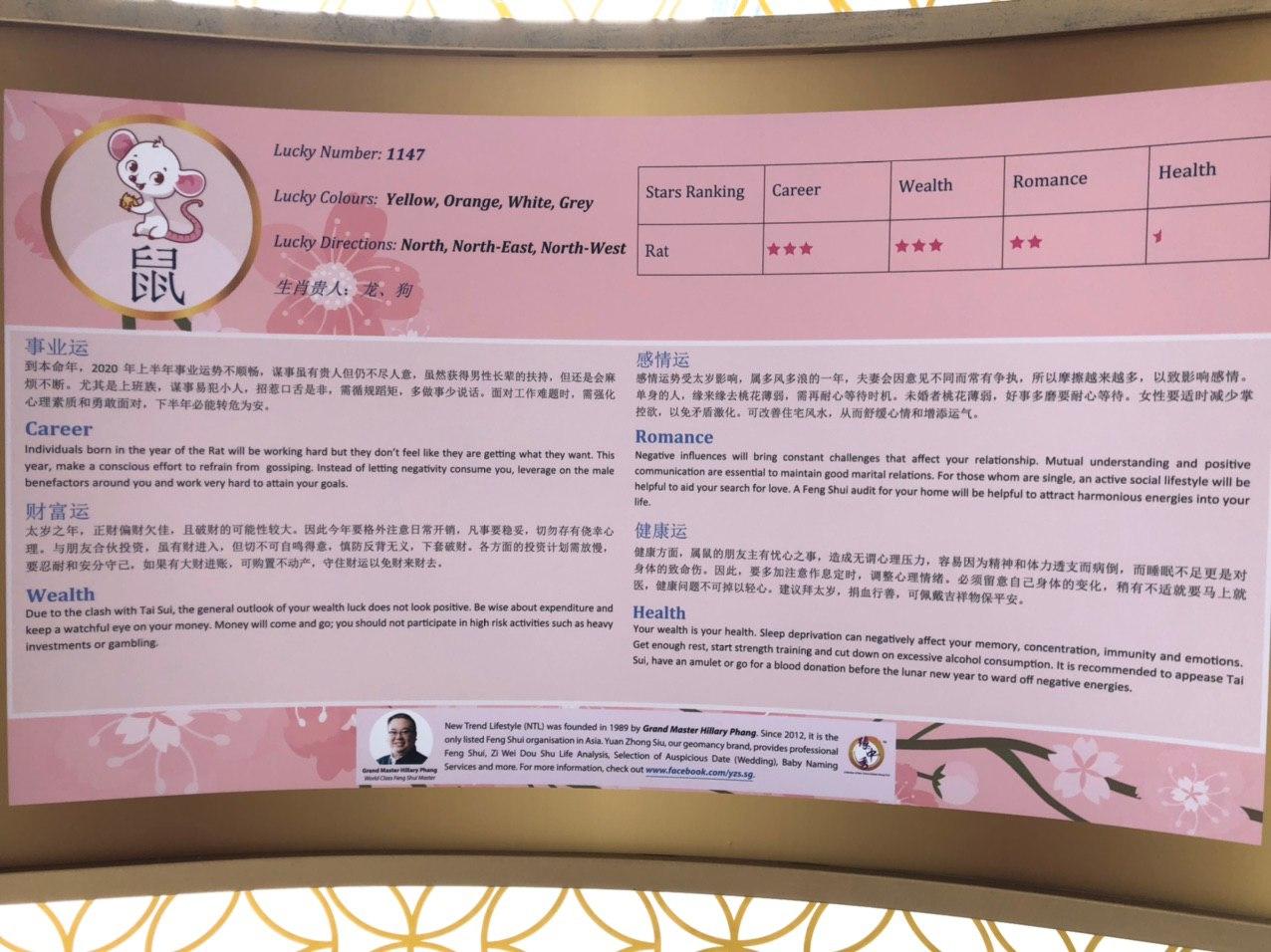 While it is indeed the Year of the Rat, unfortunately the signs are not looking in your favour if the rodent is your spirit animal. As lady luck would have it, 2020 is your ‘Tai Sui’ year. For those less acquainted with the Chinese Zodiac, that means your sign is 1 of 4 to offend the Tai Sui god and you’re in for some challenging times ahead.

Don’t think “I’m screwed” just yet – at least there will be opportunities to make the best of and turn your luck around, according to the board outside Bugis OG department store, that is. Most of the advice recommends to be safe by steering clear of romance if it’s affecting your personal growth, resting your body more to clear out toxins, and saving more instead of participating in risky investments.

If you rather be safe than sorry, you can even carry around an amulet or charm with you to “protect” your luck. For some rat-themed inspiration – or if you just want to spruce up your vibe for the year – check out our list of items to get that cost as low as $1.50 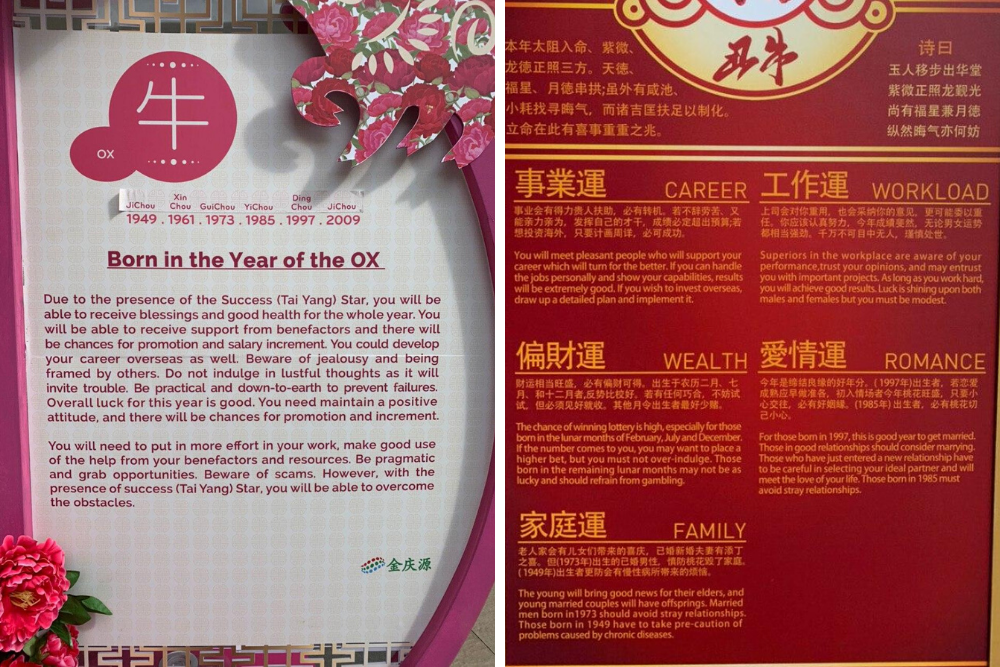 If you’re an Ox and you’ve had a bad couple of years, you can probably heave a sigh of relief in the coming New Year – especially for singletons looking for love. The Chinese Zodiac claims that the celebration “marks the beginning of a great passion that will transform itself into a durable love” – so keep your mind and heart open and you just might be changing your relationship status on your social media bio soon enough.

Even your work life might drastically improve, or as a board in outside the OG department store at Bugis hilariously puts it, “Employees can finally breathe as your nemesis in the workplace vanish(es). You are likely to receive a promotion but do not be arrogant”.

A career progression and having an annoying colleague potentially fired? Sounds like a good year in the office to us. 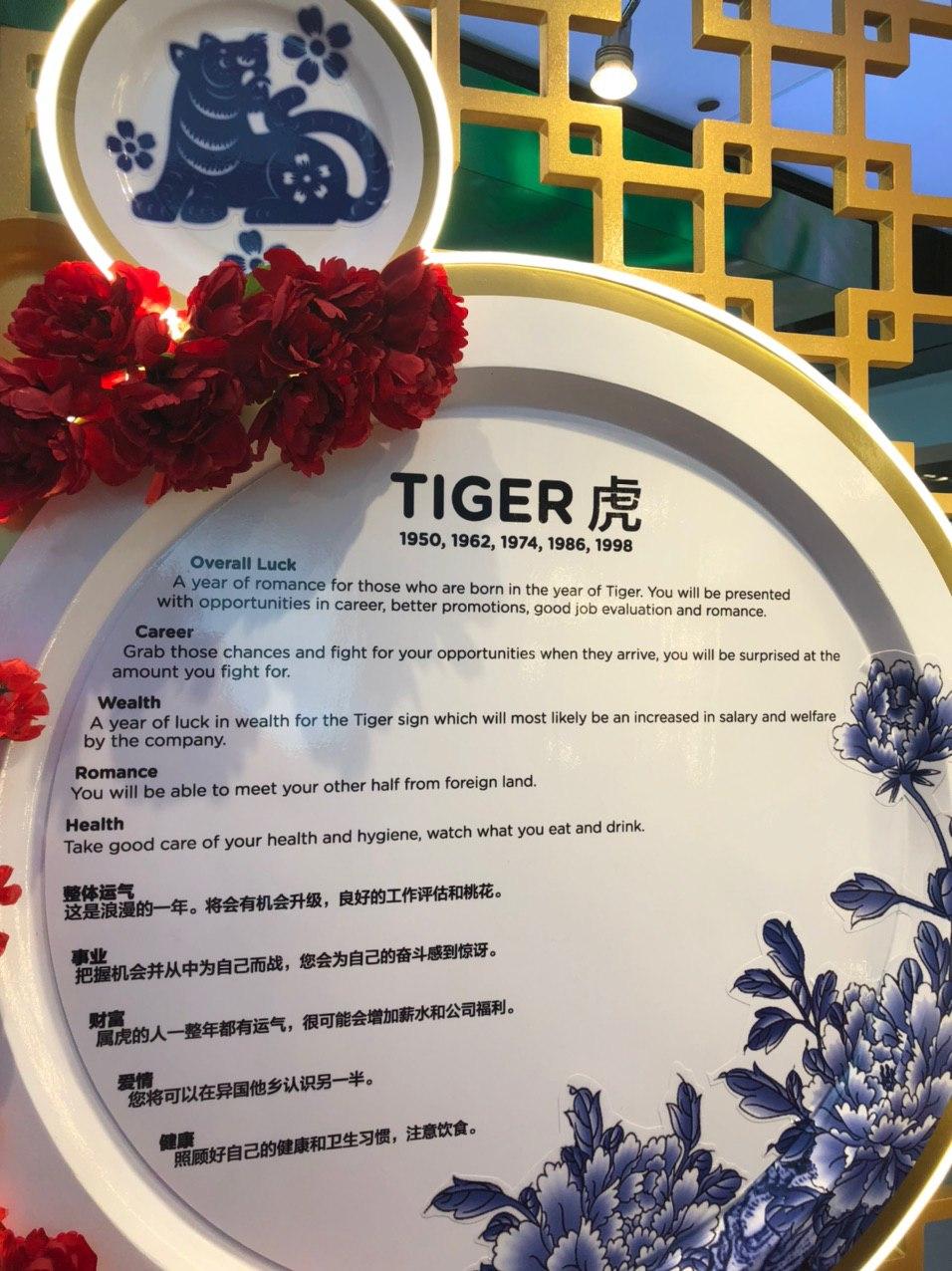 The key to a good year for the Tiger seems to be taking advantage of the opportunities headed your way, whether it’s career or romance related.

Sun Plaza’s prediction states, “You will excel and discover good opportunities in your career. However, you must endure the hardships first before reaping the hefty returns”. ION Orchard’s board also supports this sentiment; “Grab those chances and fight for your opportunities”.

Steer clear of the board beside IKEA Alexandra though. The forecast is extremely unfavourable in all departments there, from “Wealth luck is not good this year. Refrain from gambling” to “Those who have just entered new relationships will experience love rivals”.

Contradictions aside, lucky colours like grey and green indicate that earthy tones should be in your wardrobe to improve your overall year ahead.

Rabbit – stay faithful to your spouse 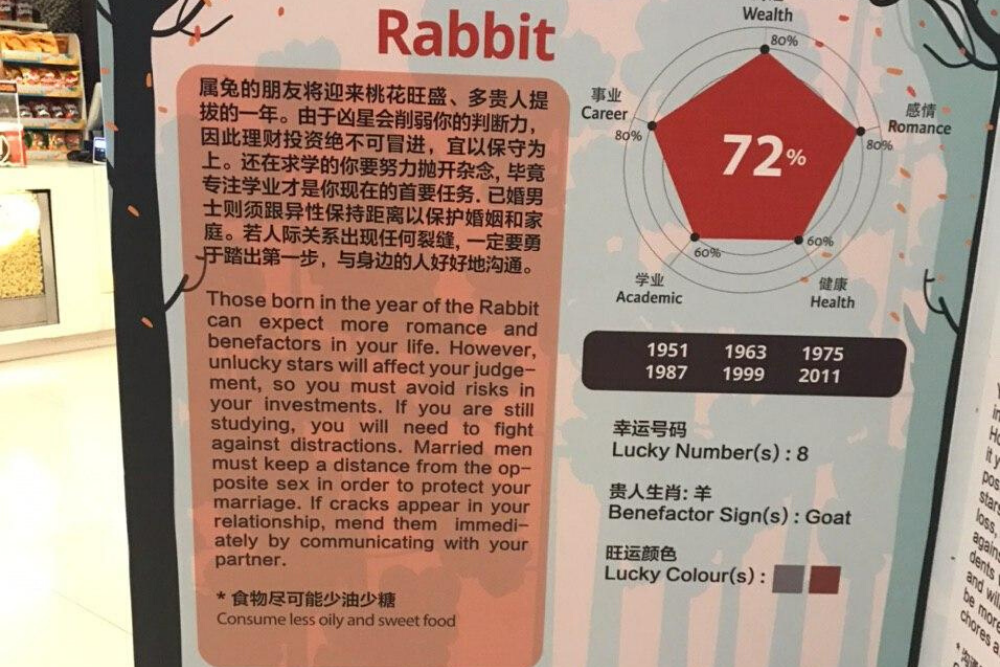 The Rabbit’s overall luck is 72% according to Bugis+
Image credit: Jessica Lai

Both ION Orchard and Sun Plaza affirm that Rabbit’s luck in career will be on the rise in the coming year. A heed of advice from Sun Plaza though: “Entrepreneurs need to be selective when picking your business partner and stay cautious to avoid being misled”.

While rabbits are known to be creatures that love to, uhm, hump, those attached will need to be extra careful not to stray from your partners. Sun Plaza’s prediction states that this precaution is “due to the clash of Tai Sui, and relationship problems will get worse so individuals need to make an effort to be on their best behaviour. Bugis+ even goes as far as to say that “married men must keep a distance from the opposite sex in order to protect your marriage”.

PSA to those already hitched: you might want to rethink OT-ing with that new single colleague too often. While if you’re still single, the board outside Bugis OG claims you’ll meet your soulmate or get married. 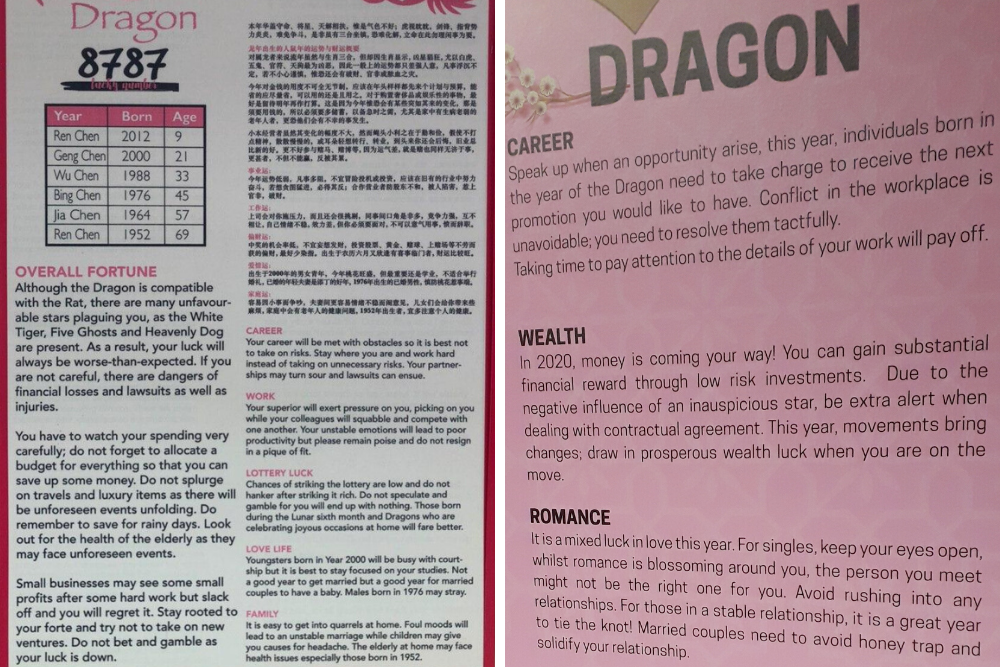 There’s a saying “health is wealth”, but unfortunately for the Dragon, that may not necessarily be true this year. Boards at SingPost Centre and Bugis+ both predict that you’ll be making some dough this year, possibly through low risk investments.

Despite the positive fortune, you’ll need to be extra careful when it comes to your HP though. Sun Plaza advises taking up a new hobby and steering clear of high-risk sports like diving and rock climbing. That probably means no island getaways to places like Bali, Phuket and Krabi in a while.

Ironically, Bugis OG once again recommends the contrary when it comes to your finances – stating you should “watch your spending very carefully” and not “bet and gamble as your luck is down”. Guess that means no mahjong or ban luck at gatherings this year… 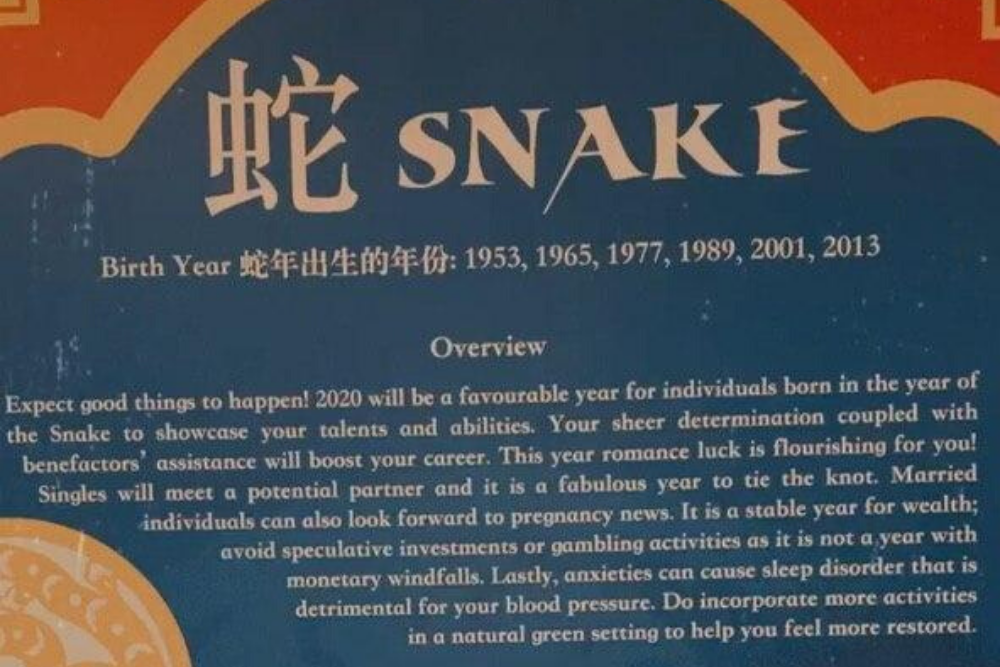 Predictions for the Year of the Snake at IMM
Image credit: Amanda Feng

If Taylor Swift can turn being called a “snake” a good thing, so can you. Although the majority of luck is on your side in the coming year, you’ll still need to be careful not to fall prey to criminals.

Paya Lebar Square heeds that you should “take note of arguments, fines and theft” as they can make you incur financial losses and Bugis+ also suggests that “unlucky stars may induce financial instability”. How can you avoid this? Well, by performing a “ritual ceremony” or not displaying your wealth. IMM even suggests that “activities in a natural green setting” can balance out your bad luck.

Besides more nature-seeking weekends, perhaps it’s also time to cut down on Grab-ing everywhere and sticking to basic tees and jeans then.

Horse – time to be more romantic and attentive 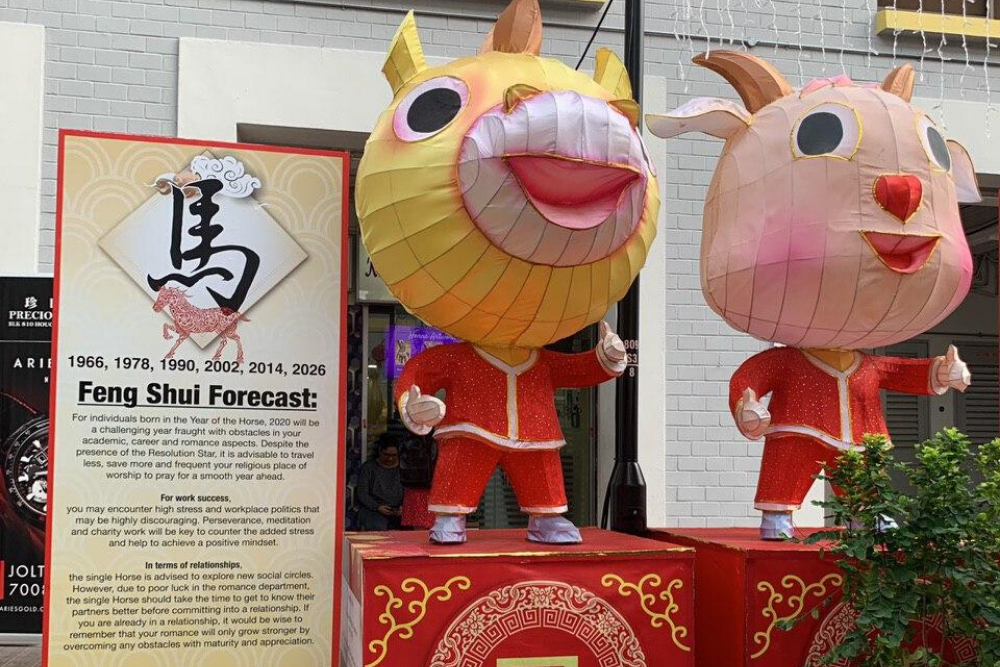 The forecast board at Hougang Central is also a photo op!
Image credit: Dayana Rizal

Whether you’re single or attached, your love life might experience extreme highs and lows this coming year. Hougang Central’s forecast suggests patience before jumping into a relationship for those looking for love. While for those in existing commitments, you might need to stick it out through some tough times to emerge even stronger.

ION Orchard recommends overcoming obstacles through a healthy work-life balance and good communication. You know what this means – less OT-ing and blunt “K”s when replying texts. 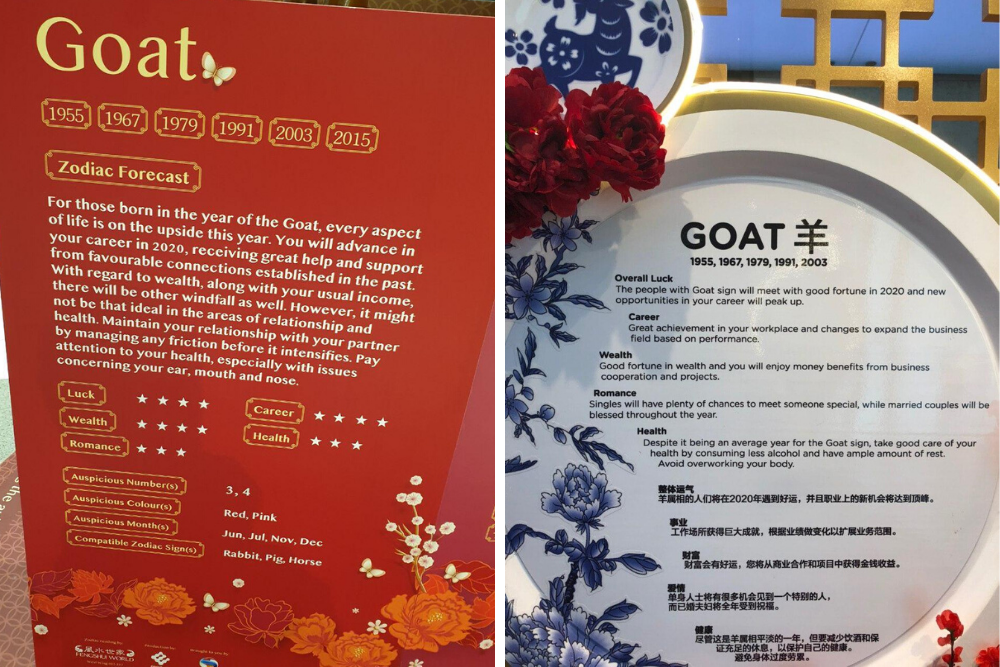 Suntec City (left) and ION Orchard (right) both have positive outlooks for the Year of the Goat
Image credit: Denise Oh and Bryan Yeong

“Fabulous” and “superb” are just some of the terms described for the Goat this year. According to many predictions, those born in the year of the Goat will actually have the best luck out of all of the zodiac!

All aspects look to be favourable, including Wealth where there is “other windfall” according to Suntec City, Romance where singles and married couples will enjoy blossoming relationships as quoted by ION Orchard and Career, which Sun Plaza states that benefactors will assist you to success. 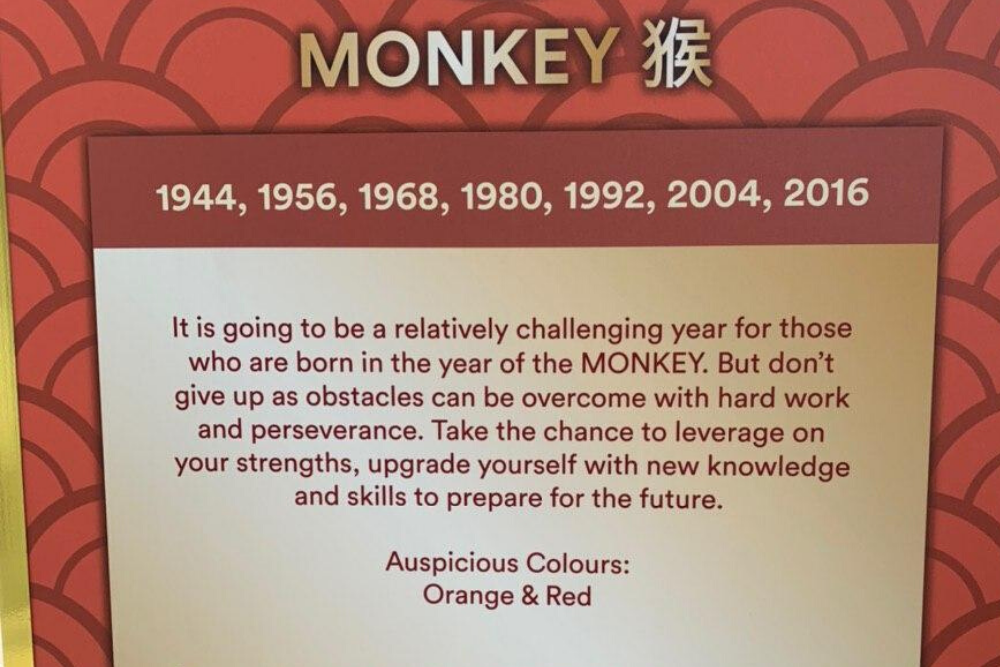 Time to kick the bad habits and start making new ones if you want your health to be in the safe zone, at least according to boards at Suntec City and Sun Plaza. Monkeys might want to say “no” the next time your kaki calls to say “eh, Marquee tonight ai mai?” , since your fortune states that excessive drinking and smoking might cause gastrointestinal and liver problems. Yikes.

Elsewhere, Paya Lebar Quarter adds that you’ll need to watch your back for predicaments like “accidents” and “gossip”. Seems like a rough year for the Monkey, but with a little precaution, we’re pretty sure you’ll swing towards a better year next time. 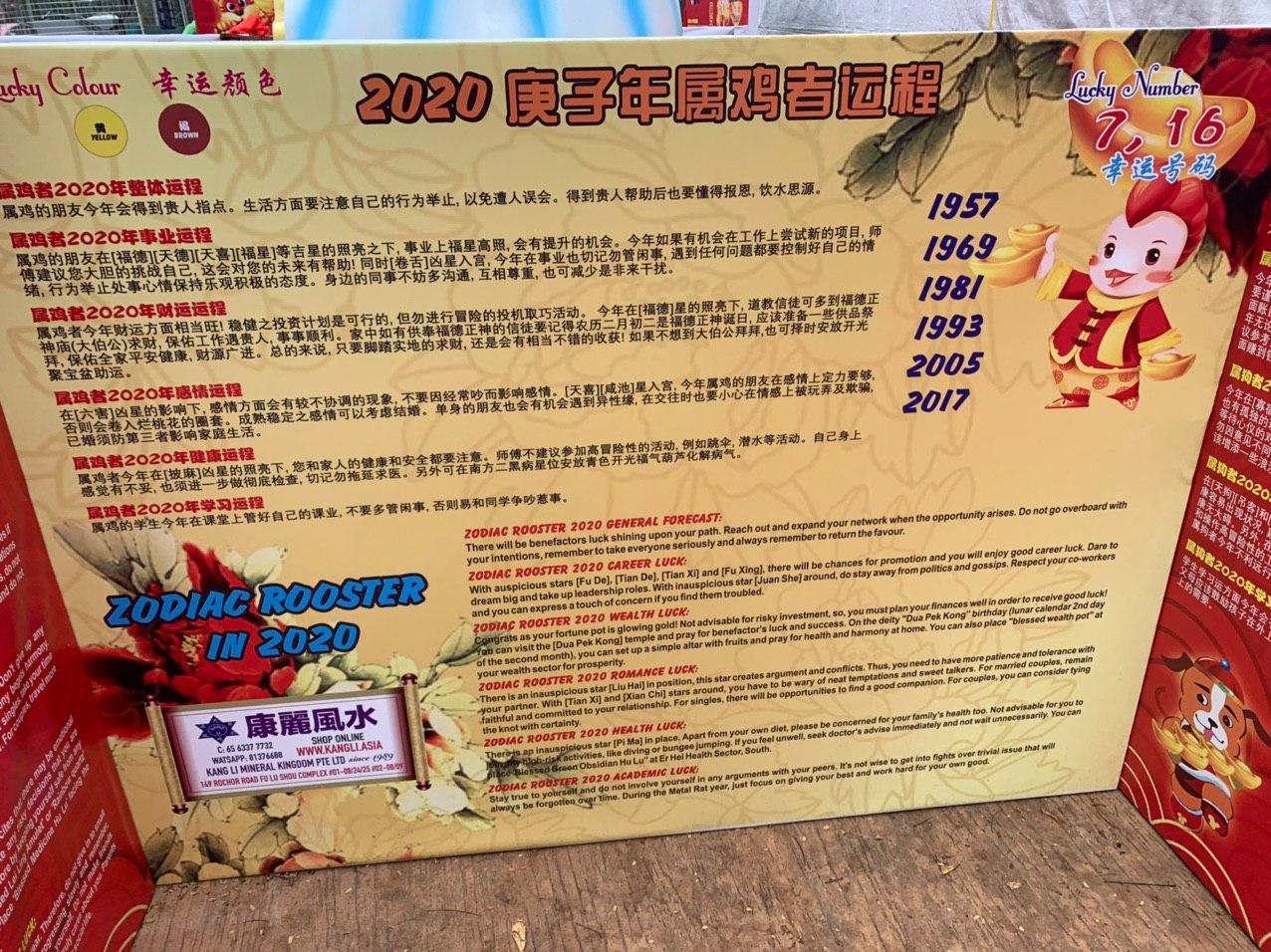 You might want to rethink your BBT upsize or “extra toppings” since your finances are said to be in trouble. Similarly to the Rat, the Rooster is supposedly “offending” Tai Sui, which results in unfortunate circumstances in several areas – wealth being one of them. Sun Plaza predicts that there will be “endless bills to pay for and many tears will be shed” – so you might want to keep a shoulder or a pack of tissues nearby.

Hey on the upside, at least boards at Paya Lebar Square and Serangoon Central say otherwise, but it’s always better to play on the safe side. 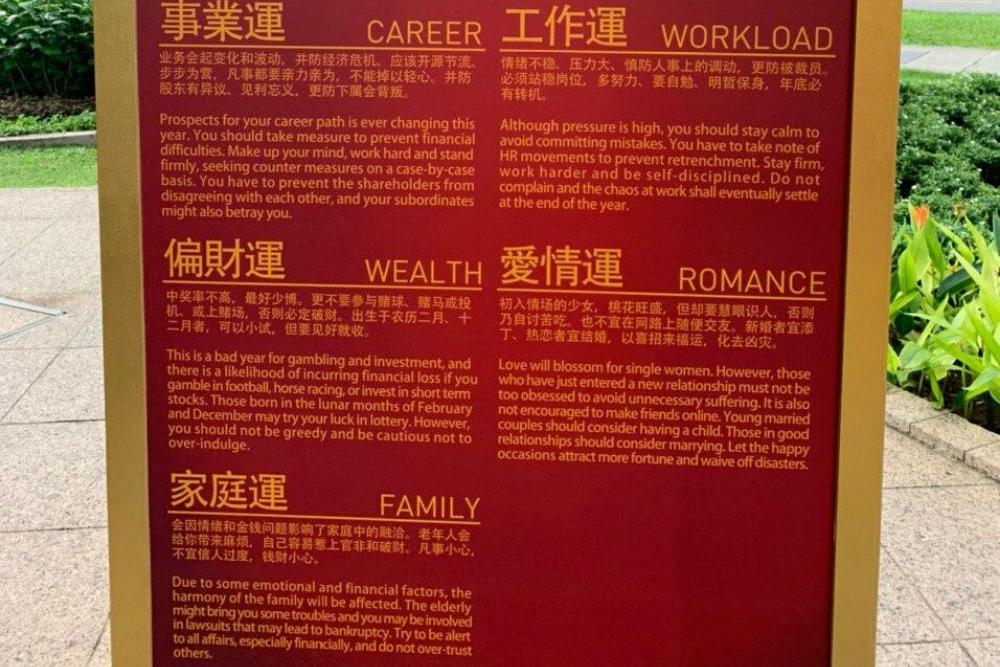 Some serious love advice from the board beside IKEA Alexandra
Image credit: Denise Oh

Just like Gaga, the Dog will be caught in a bad romance this coming year. Seriously, that’s literally what the board at Suntec City says. “Place your trust carefully to avoid being taken advantage”, it reckons.

The prediction beside IKEA Alexandra sheds some further information on this. Single ladies might see some serious dating prospects, although it also recommends that “it is also not encouraged to make friends online”. Take this as a sign to rest your thumbs from swiping on dating apps, and just maybe the love of your life will find you the old-fashioned way. 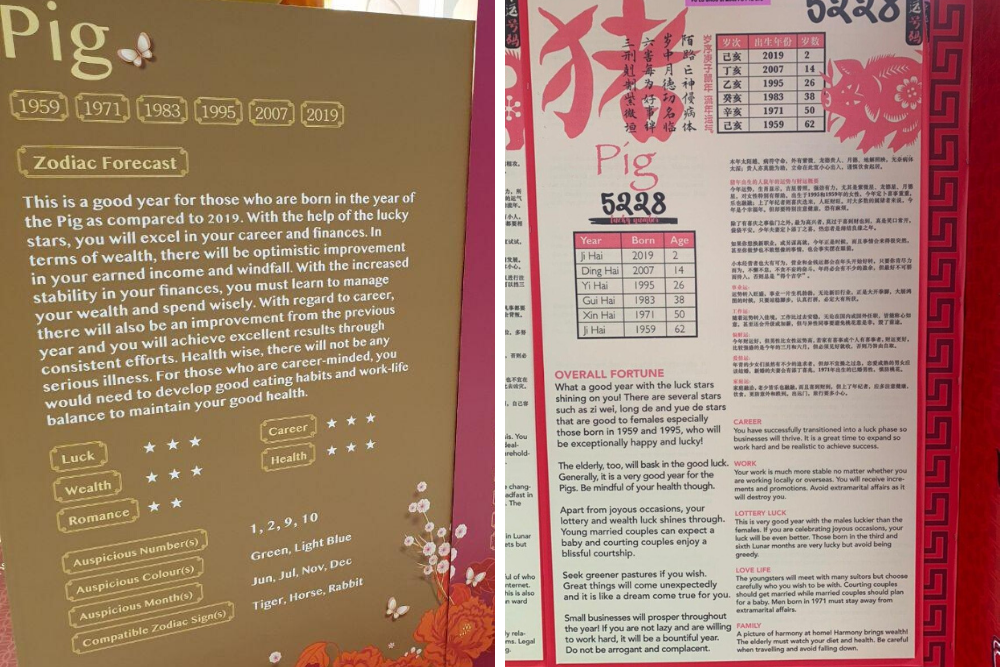 Time to huat big time this year! Many forecasts claim that career for those born in the Year of the Pig will propel to greater heights, with imminent pay increments, opportunities and promotions. Boards at places like Suntec City, ION Orchard and SingPost Centre all say that hard work and focusing on your targets will be required to get there.

Just a word of advice from Bugis OG however: “Avoid extramarital affairs in the workplace as it will destroy you”. You’ve been warned. 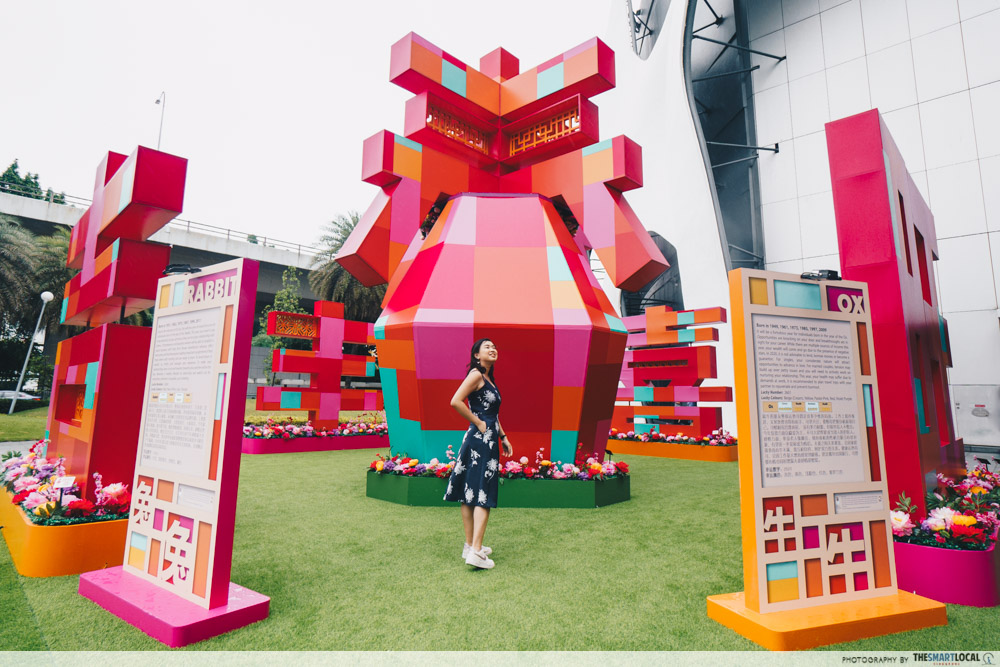 We can’t be certain of what the year ahead truly holds for ourselves, but having some guidelines and advice from feng shui experts is a fun way to compare our fortune with our family and friends. 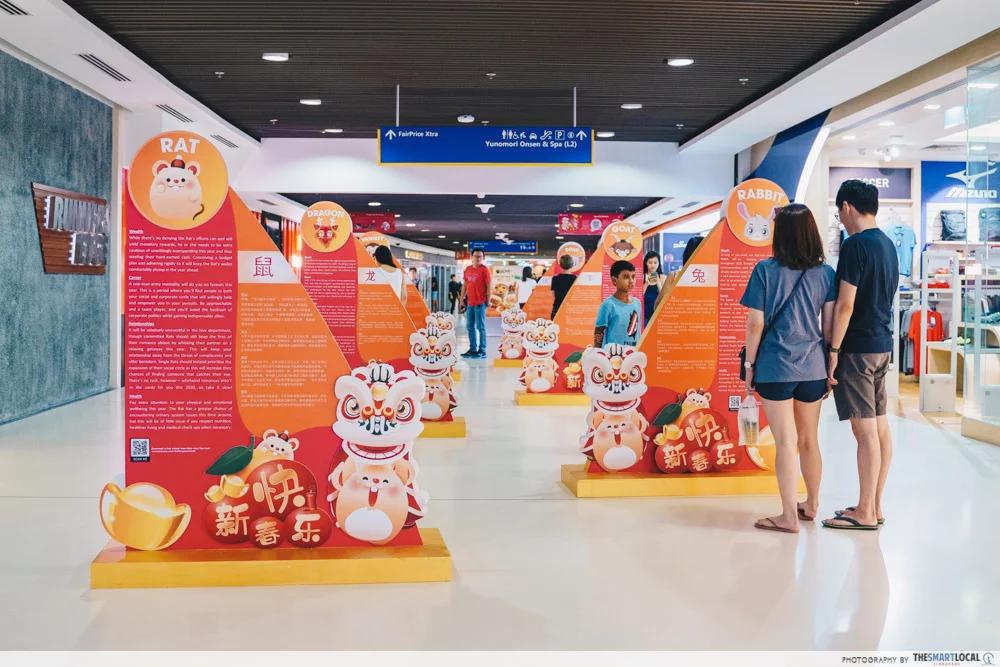 Whether you’re lucking out in the romance department or supposedly having health issues in the coming year, do remember to take everything you read or hear with a pinch of salt. Ultimately, the only thing that will be confirm plus chop is the warmth of bai nian visits, angbaos and CNY snacks! 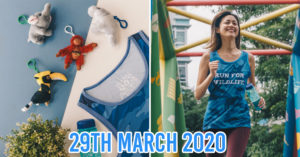 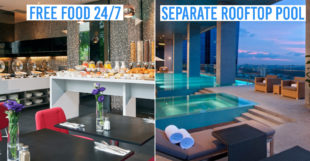