Common mistakes in the kitchen

Every budding chef or home cook starts off in their home kitchen, learning the ways of this craft and earning the famed title of “being able to cook”. Today, with the coronavirus keeping us indoors, it seems like more and more are honing their proficiency in the kitchen.

But regardless of whether you’ve just started cooking or have been at it for 10 years, there are common kitchen mistakes that a lot of people seem to make. Ranging from cooking techniques to general kitchen knowledge, rectifying these mistakes will help level up both your food safety and cooking skills.

For more articles on cooking & kitchens: 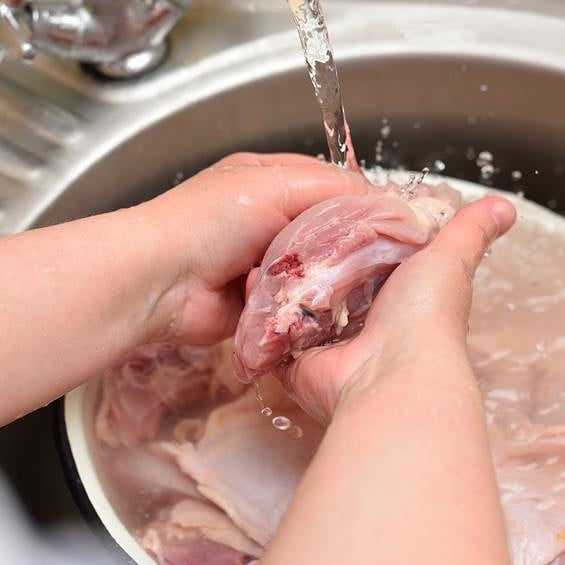 If cooked properly, the heat will kill any pathogens lying around and keep you salmonella-free. So unless there’s any visible dirt or blood on the meat, it’s scientifically approved that you can skip the washing.

However, if you’ve bought your meat from a wet market or where the sanitary conditions might not be as high, you can wash the visible dirt or blood away. Just make sure to do so away from your other ingredients or kitchenware to prevent cross-contamination. 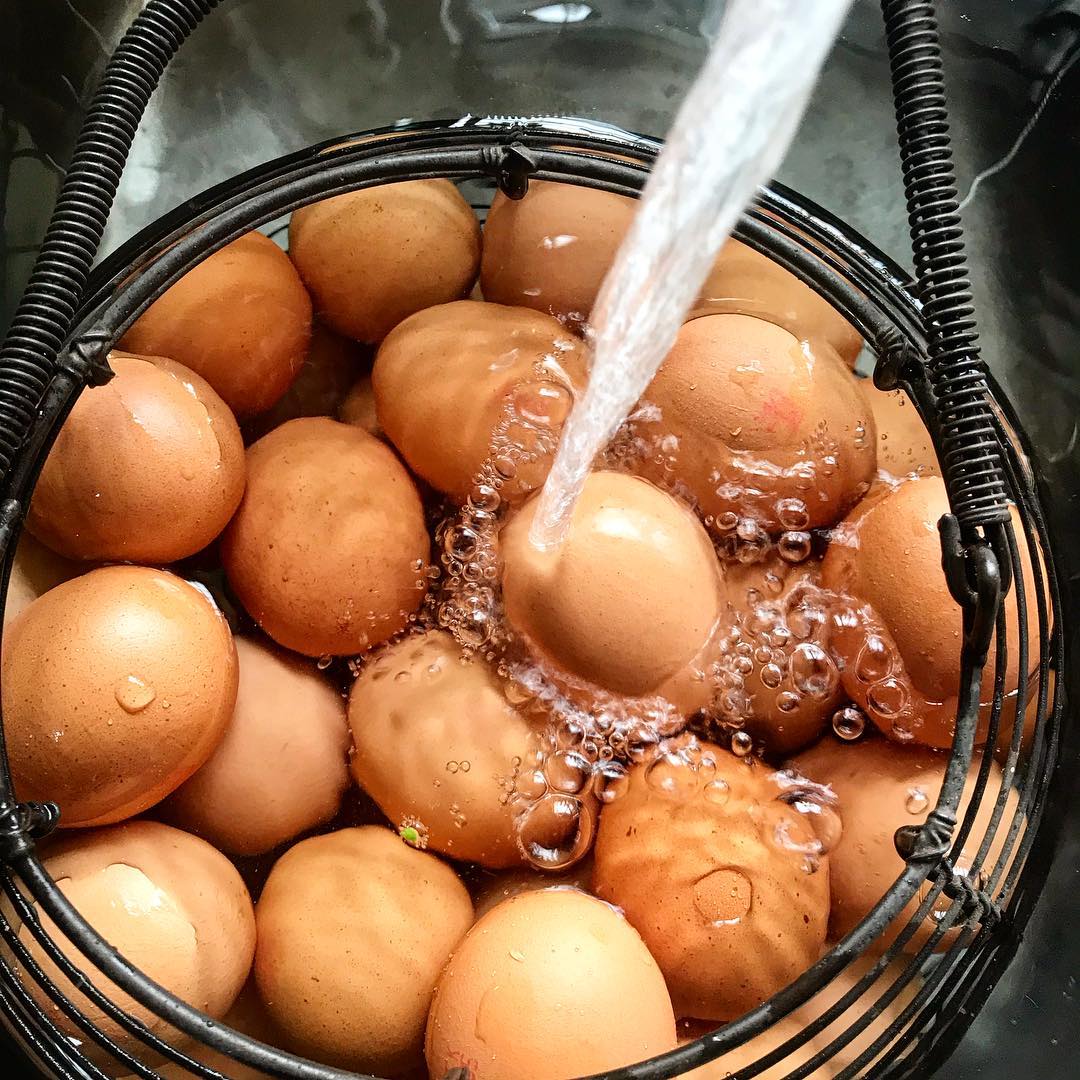 On the topic of washing, eggs are another kitchen staple that needs to be untouched. The protein-filled ovals have a natural coating that prevents bacteria like salmonella from penetrating the shell. And by washing this, you’re removing this layer of defence away from the egg and contaminating its insides.

If you see visible dirt or droppings still stuck on the egg shell, you can wash them off but do so only right before cracking them. 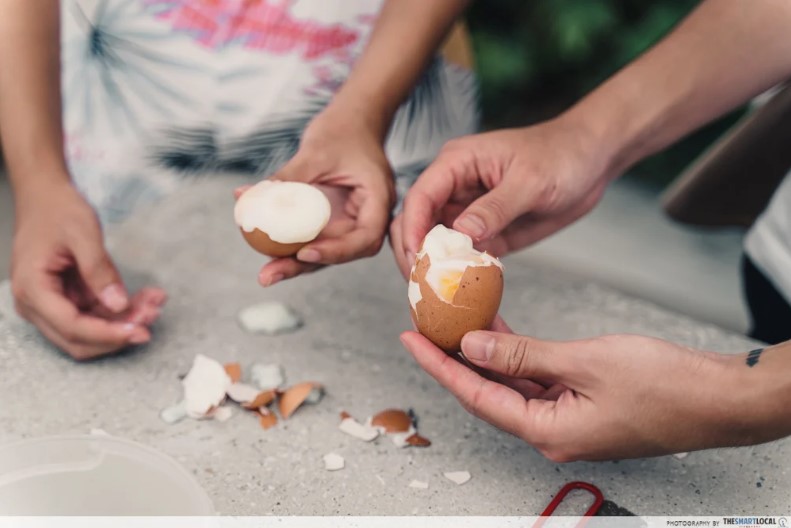 Another topic of hot debate is whether eggs need to be stored in the fridge. The answer mostly depends on where your eggs are sourced, but in Singapore, the eggs-perts recommend that they’re chilled in the fridge to further minimise bacterial growth.

3) Frying wet vegetables in a pan full of hot oil 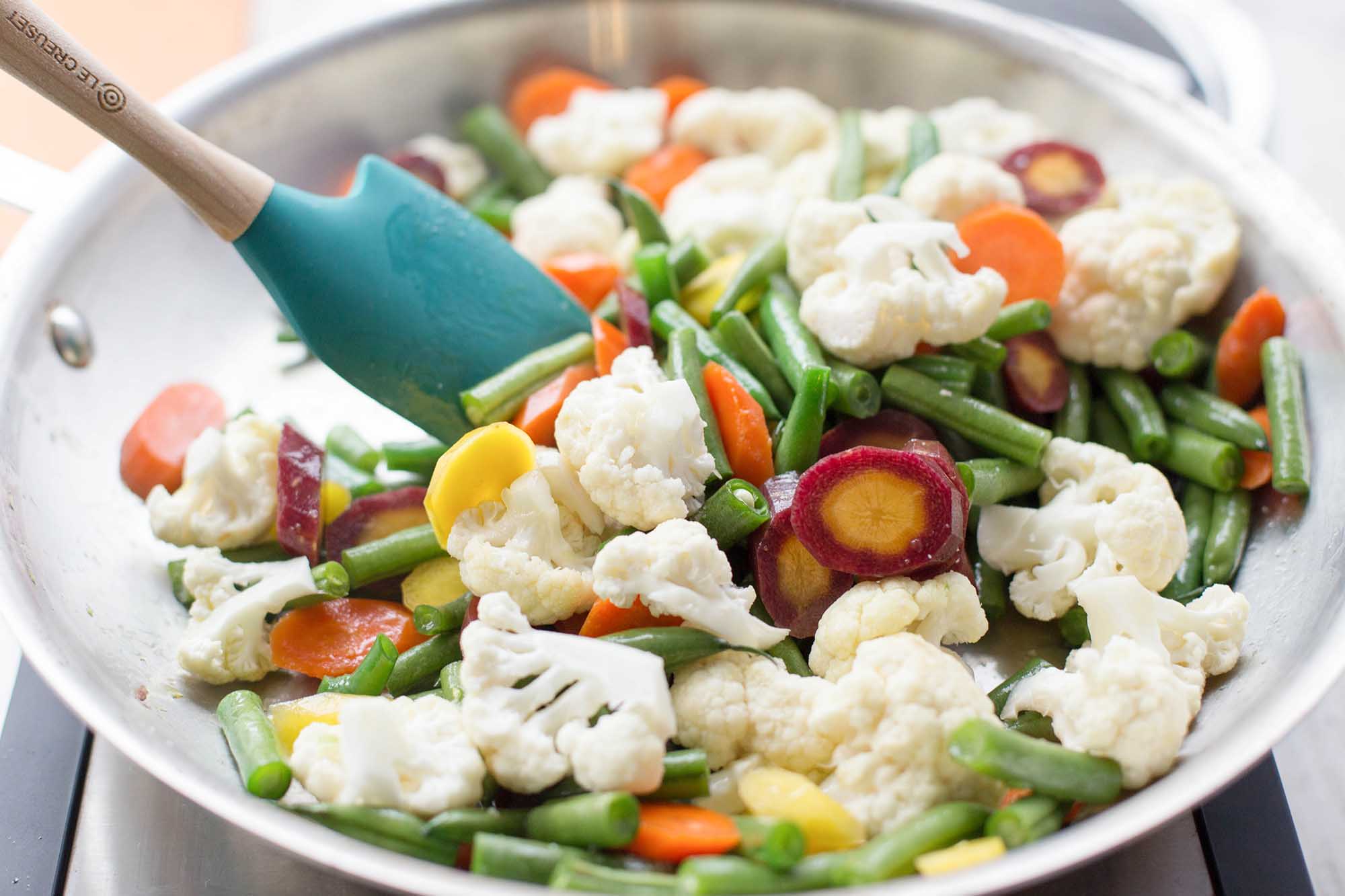 What you definitely should wash, however, are your veggies. But it’s a common mistake to dump the rinsed green goodies into your frying pan immediately after washing it. The moisture makes your stir-fry soggy, turning it into a stew instead of a crispy delight. On top of that, it’s well-known that water and hot oil don’t mix, and you wouldn’t want oil to splatter everywhere.

Before you go all Gordan Ramsay and start tossing in the pan, let the veggies dry at least a little in the strainer. You can also invest in a salad spinner if you want to save time.

Also check out our article on the longest-lasting vegetables to make the most our of each grocery trip.

4) Defrosting meat for too long 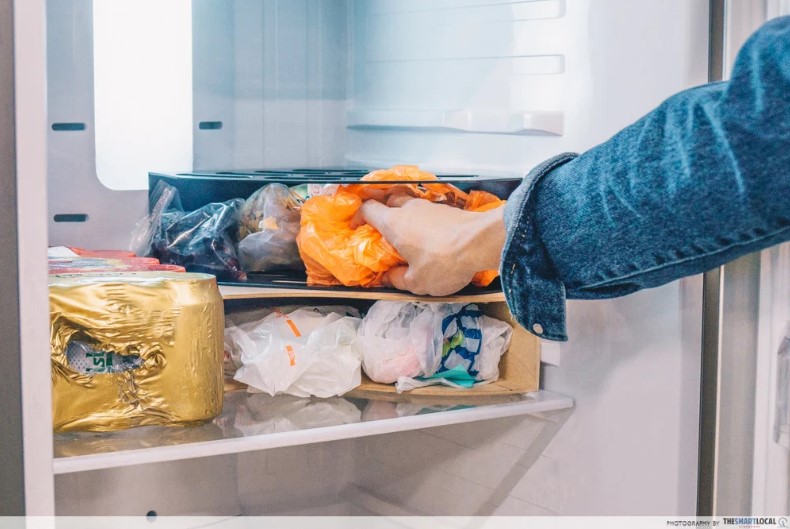 I’m sure we can remember those childhood moments where mom would tell us to “take out the chicken” in the morning, but we ultimately forget and panic when she returns. Well, “take out” shouldn’t mean leaving it on the counter, because any meat at room temperature for more than 2 hours is at risk of going bad. 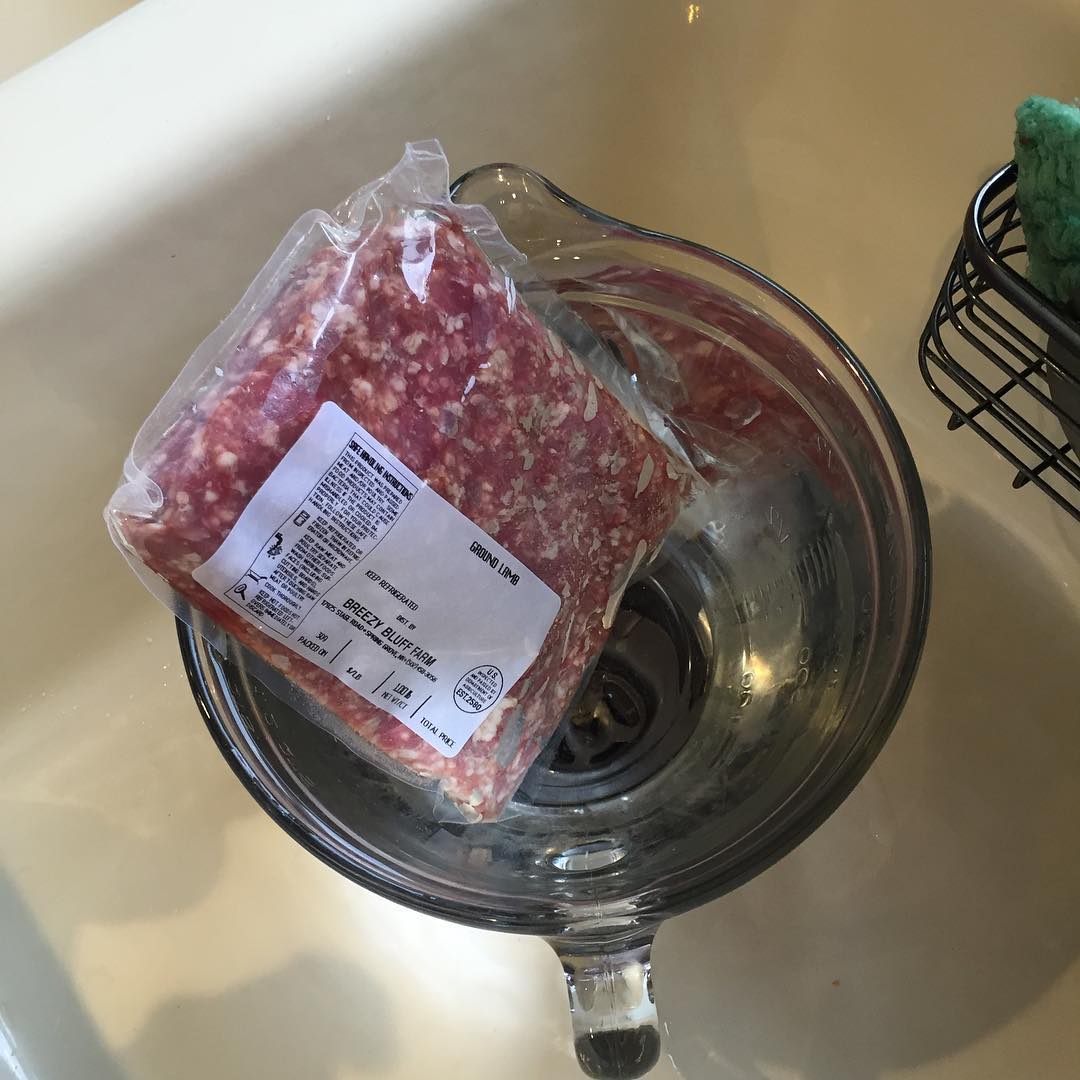 Instead, if you want your meat defrosted at night, move it from the freezer to the fridge in the morning. Alternatively, if you only decided to cook last-minute, put the meat in a ziplock bag, submerge it underwater and it should defrost entirely within an hour. If even an hour is too long a wait, then just defrost it in the microwave. 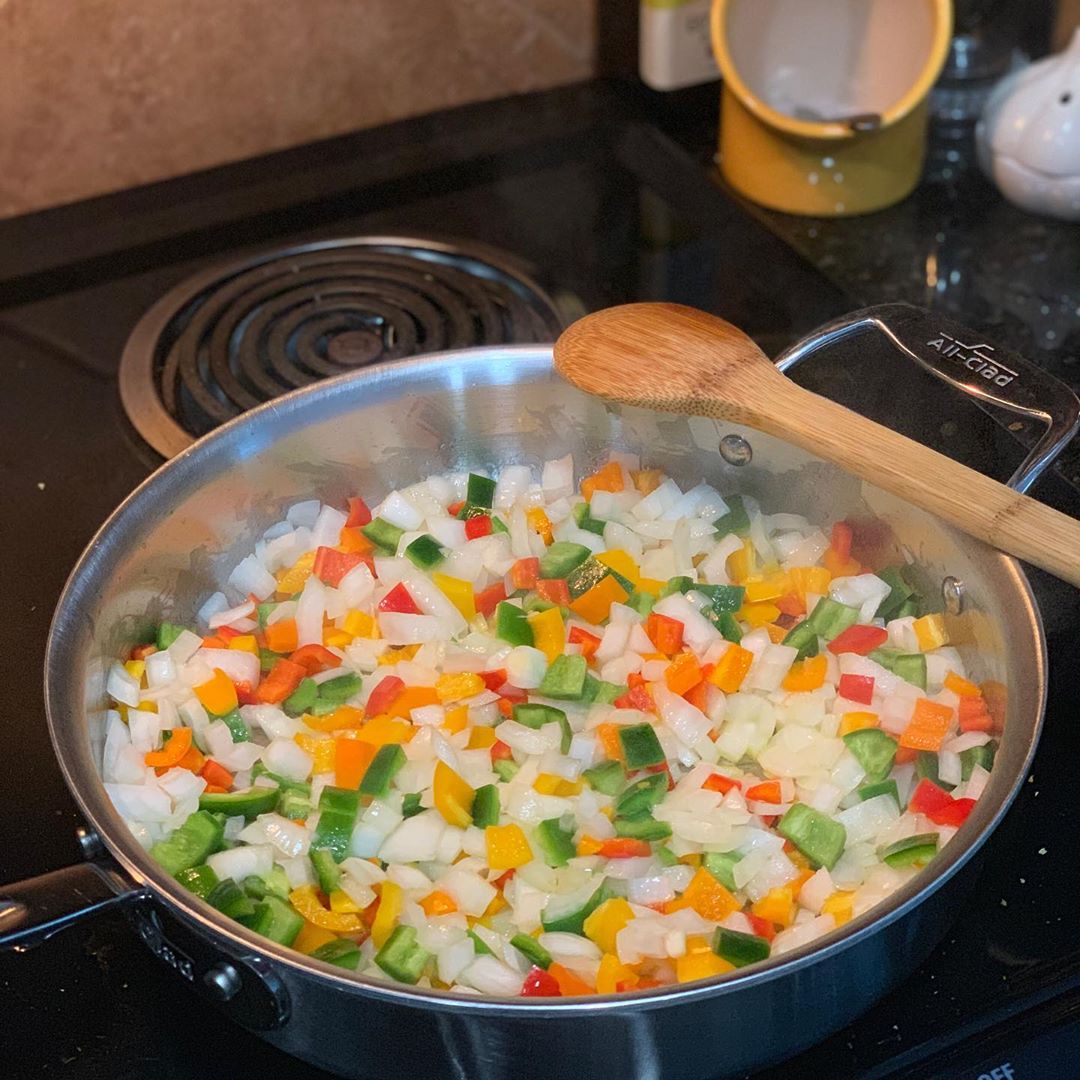 Overloaded pans never produce the results you’re looking for – be it with meat, veggies or even baking. It’s understandable that you’d wanna cook that big batch of chicken tenders in one go, but by saving time you’re losing out on flavour and crispy brown skin.

Cooking releases moisture within the meat and an overcrowded pan prevents that moisture from evaporating, boiling your meat instead of frying it.

Same goes with veggies, they’ll start over-sweating and end up soggy instead. Plus, it’ll be a challenge to ensure everything’s evenly cooked. Give your food room to breathe, you wouldn’t want to be squished together in a tight, hot space either.

6) Using the same oil for everything 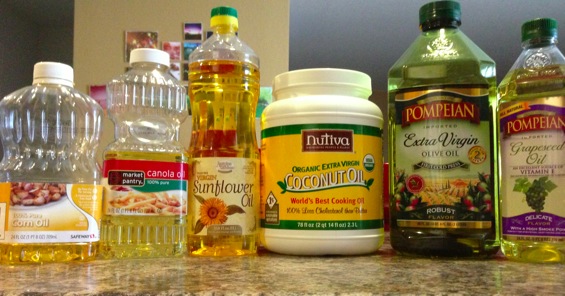 Our pantry will usually only have one type of oil, and we won’t exactly think much about the different types of oils unless we’re choosing one at the supermarket. But the differences go beyond “olive oil is fattening” and “vegetable oil seems healthy”, they actually have different purposes.

Olive oil, vegetable oil, extra virgin oil, coconut oil and others all have different “smoke points”, meaning that they cook at different temperatures. We can’t cover every type of oil, but between the most common ones:

7) Using the same cutting board for everything 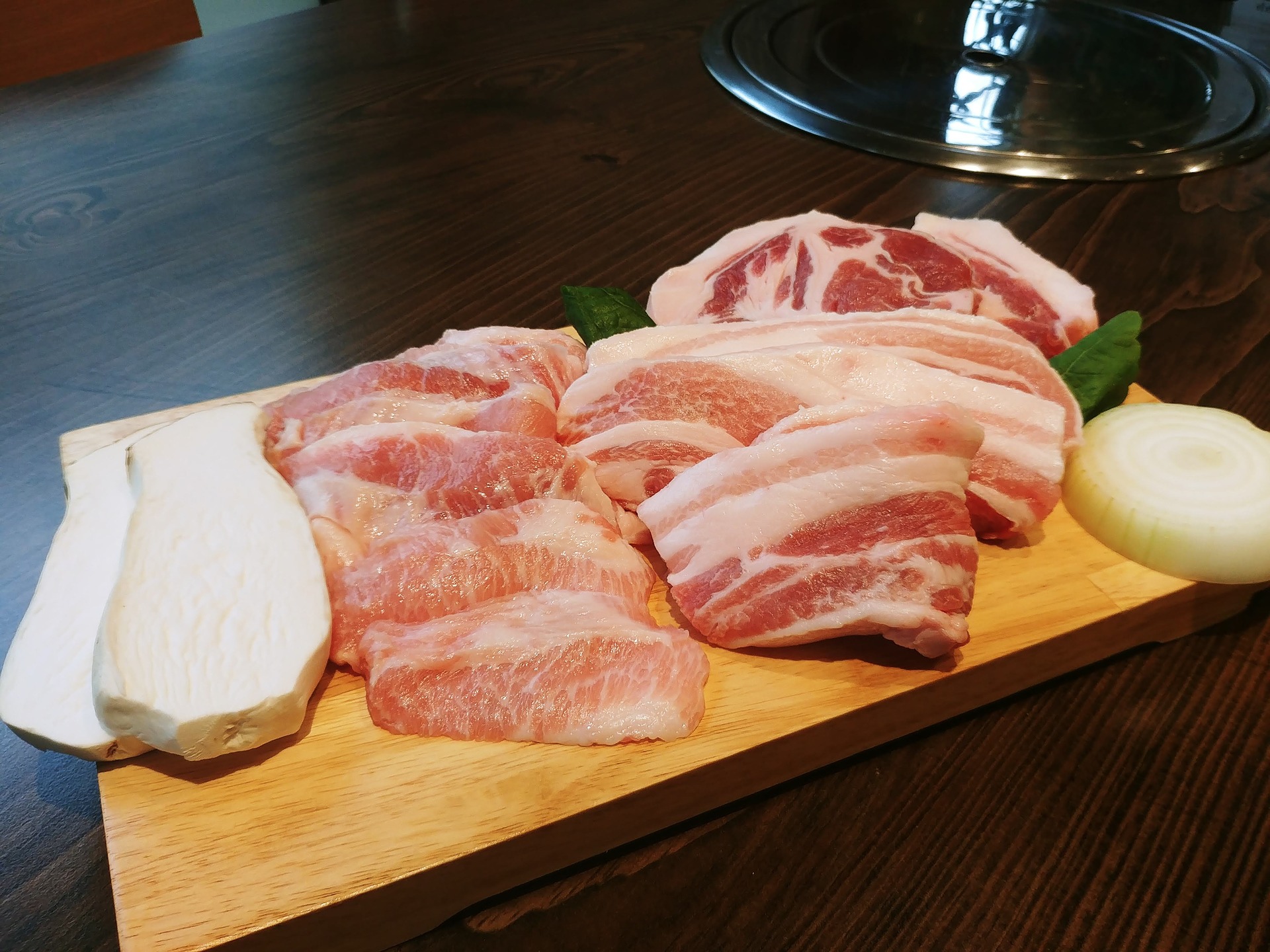 There’s a high risk of cross-contamination if you cut your fresh cucumbers on the same cutting board where you chop your raw chicken. The general rule of thumb is to have at least two cutting boards in your kitchen, one for raw foods and one for cooked/ready-to-eat foods like salad vegetables.

“But I can just wash it and reuse it, can’t I?”. You’d be surprised with how much bacteria can hide in those things, better to be safe than sorry.

8) Cooking cold meat immediately after taking it from the fridge 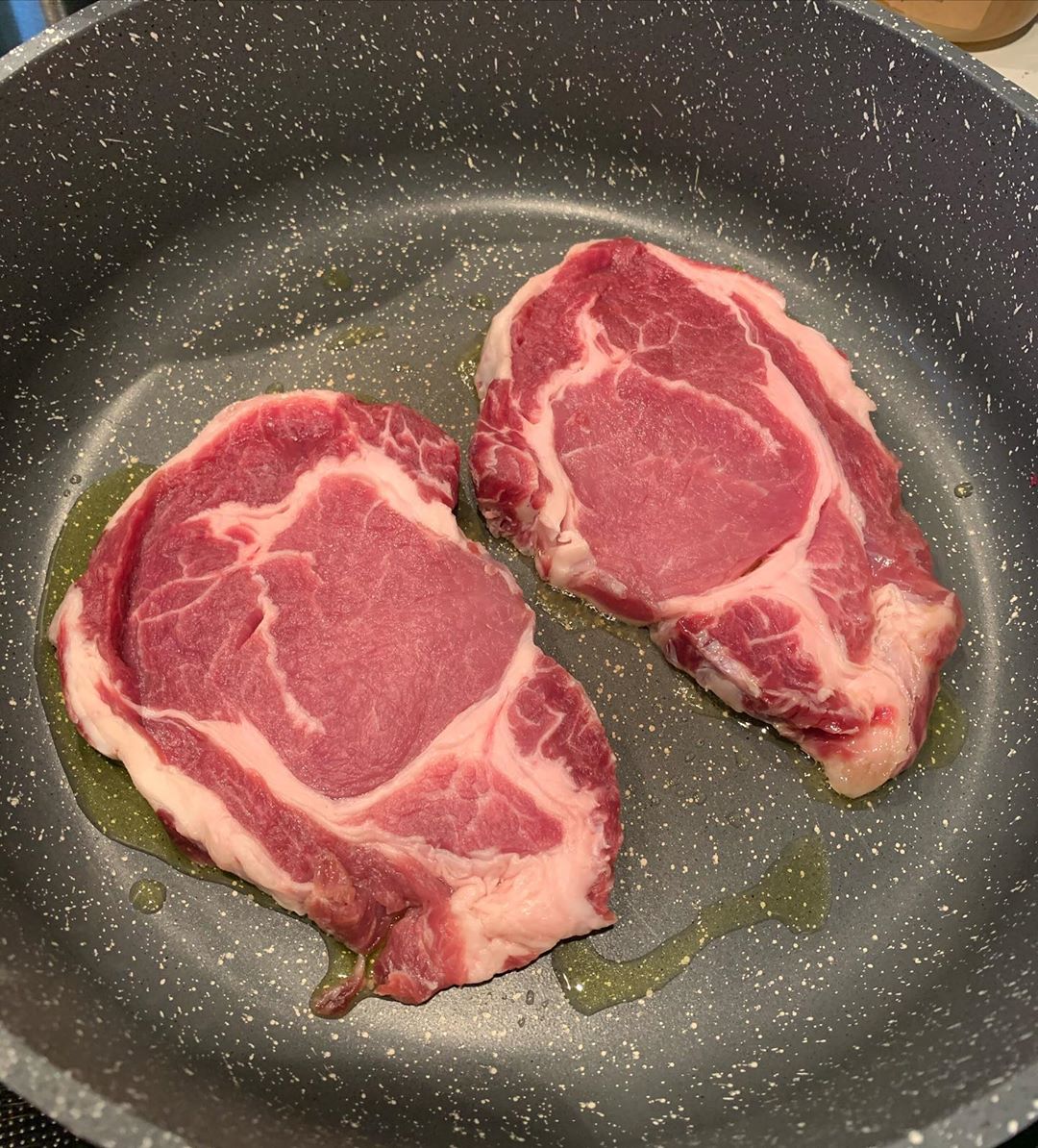 Cooking cold meat can result in uneven cooking, with meat that’s done on the outside but not on the inside. To solve this, simply let the meat rest outside the fridge for a short 15-20 minutes.

9) Not sharpening your knives regularly 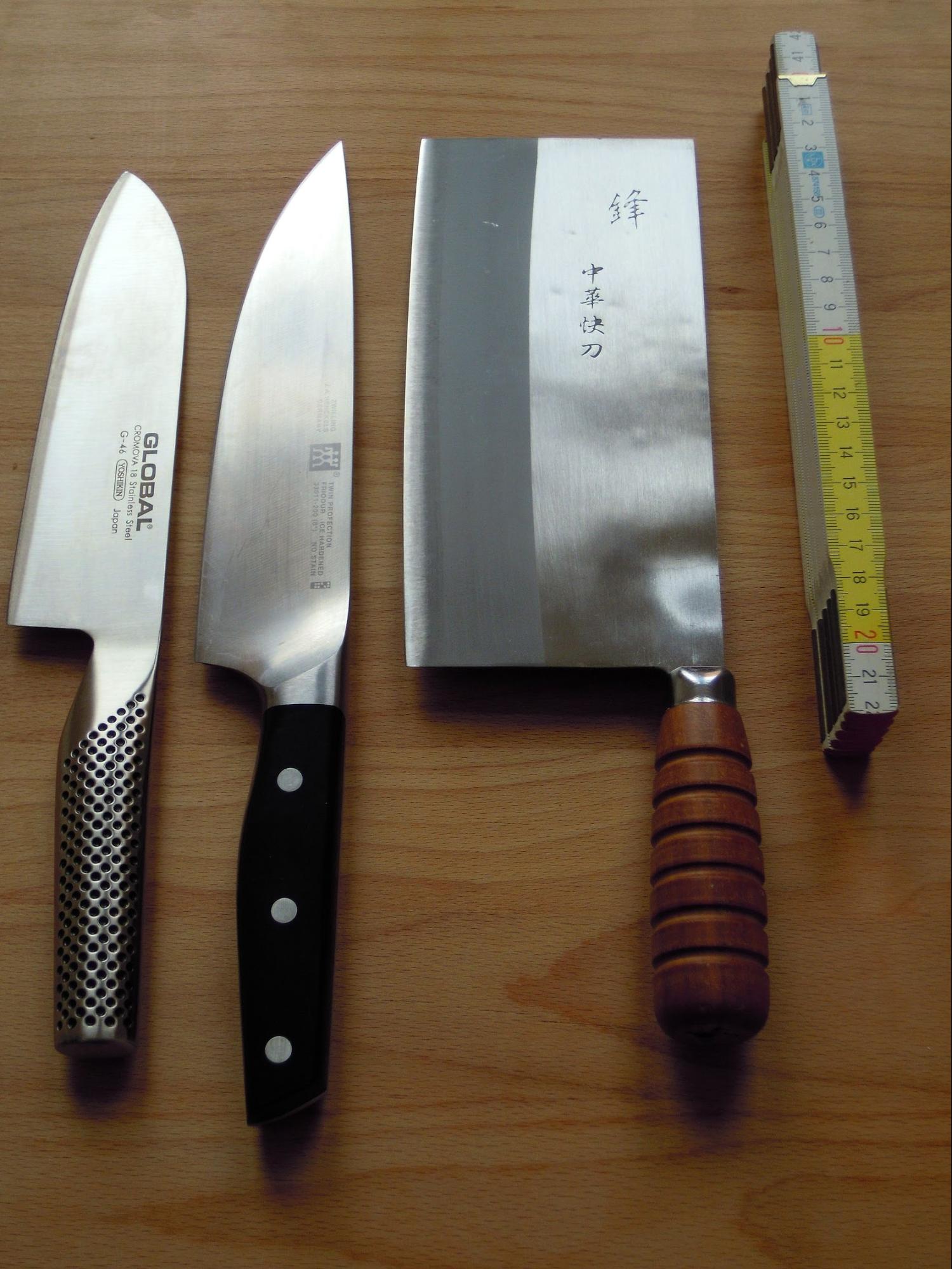 Paradoxically, blunt knives are actually more dangerous than sharp ones because it takes more pressure to cut things, increasing the likelihood of injuries. 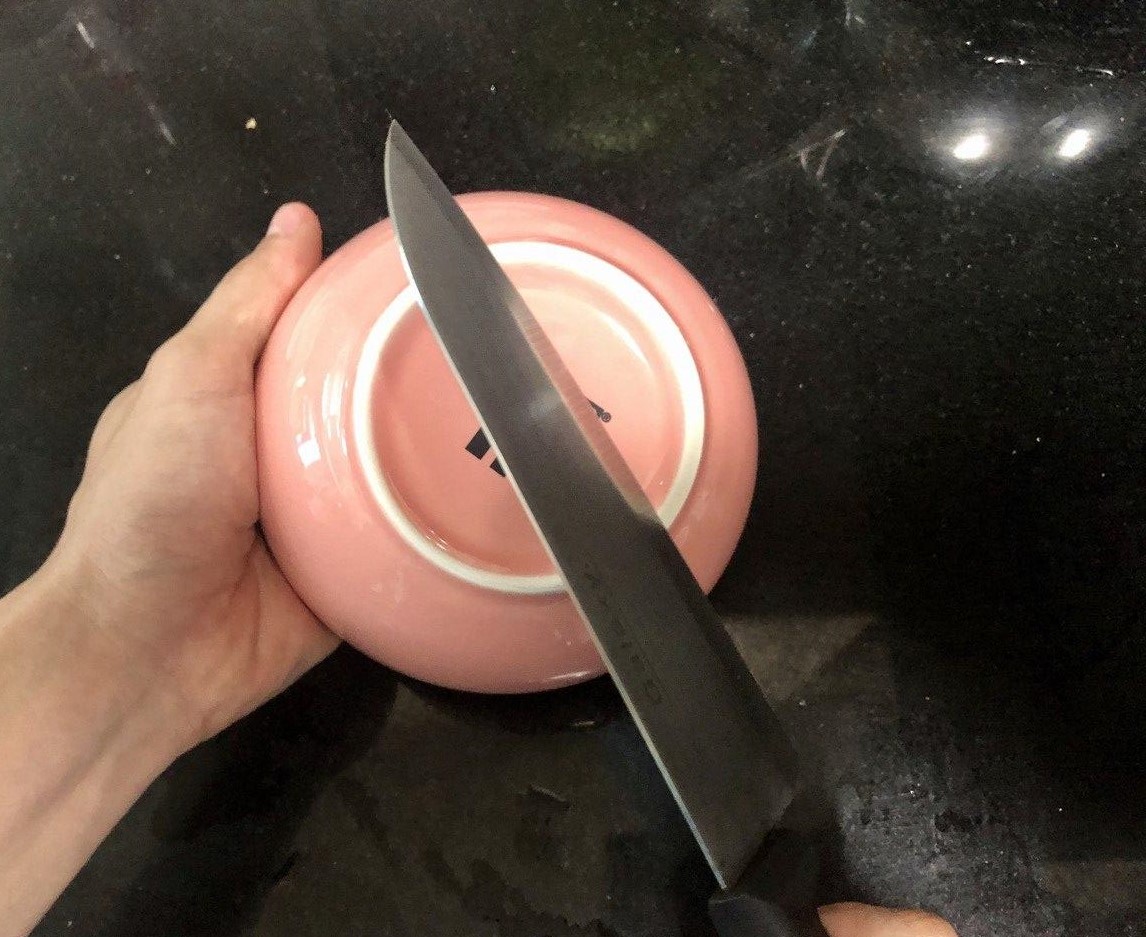 Knife sharpening tools seem like a “gourmet” addition to the kitchen, but they should really be a necessity. It doesn’t need to be anything fancy, a simple honing rod or even the bottom of your mug or ceramic bowl also works as a sharpener too.

Don’t forget about proper knife storage either to prevent them from dulling. Try to give them their own drawer, or invest in a magnetic knife rack on the fridge 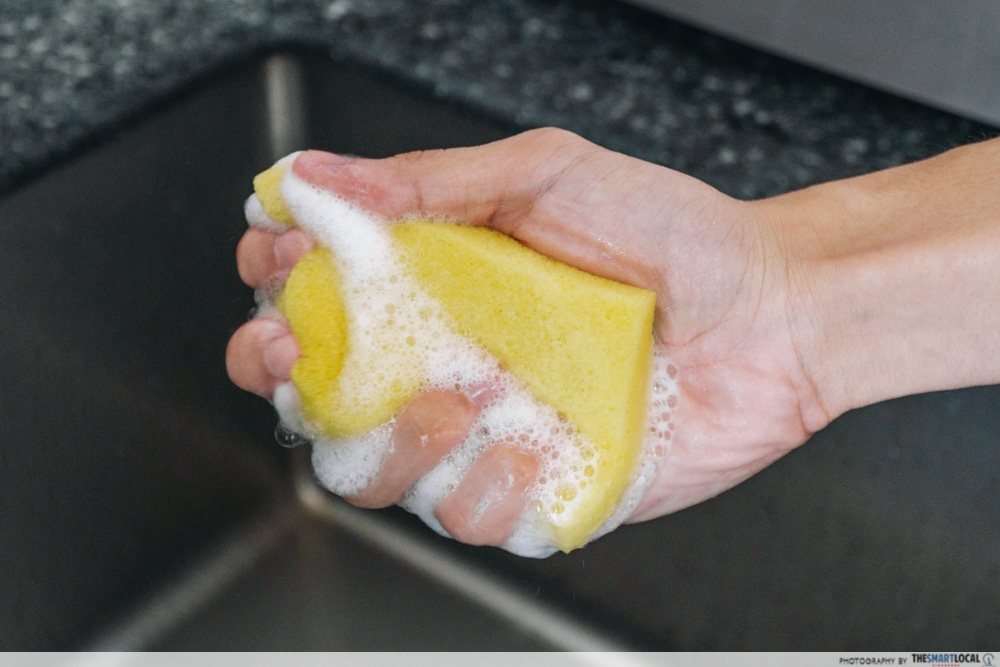 Think about how long you’ve been using the same sponges and kitchen cloths and just how much bacteria is hiding in them. It’s easy to neglect these kitchen essentials when we’re doing our spring cleaning because, well, they are the ones doing most of the cleaning.

For sponges, you can de-contaminate them by boiling for 5 minutes or placing it into a microwave for 2 minutes. For kitchen clothes, either hand-wash or throw them in the washing machine regularly. And if any of them are nearing the end of their lifespan, it’s time to get a new one.

If you’re guilty of any of these mistakes, it’s never too late to learn and fix your future cooking. Hopefully, after spending more time in the kitchen, you’ll know how to prepare food safely, cook better and be prepping like a pro. 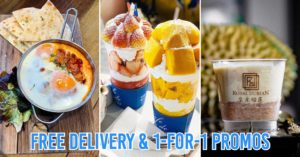 39 New Food Delivery Options To Support With Free Delivery & Huge Discounts
7 Tips To Avoid Credit Card Fees In Singapore So It Doesn’t Eat Into Your... 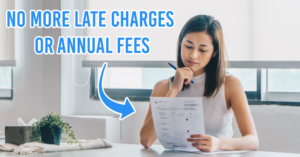