The day we’ve all been waiting for has finally come when nightclubs operate at their full capacity. And we’re here to spill the tea on where all the best clubs in Singapore are.

From Marquee and Avenue to Zouk, here are the most popping dance floors for you to let loose and release your inner Michael Jackson from 19th April onwards. Just take note of the pre-entry testing requirements before you head out.

Ask anyone around town about nightclubs, and chances are they’ll tell you about Marquee – a Singapore staple – where some of the country’s richest people blow thousands of dollars every weekend. 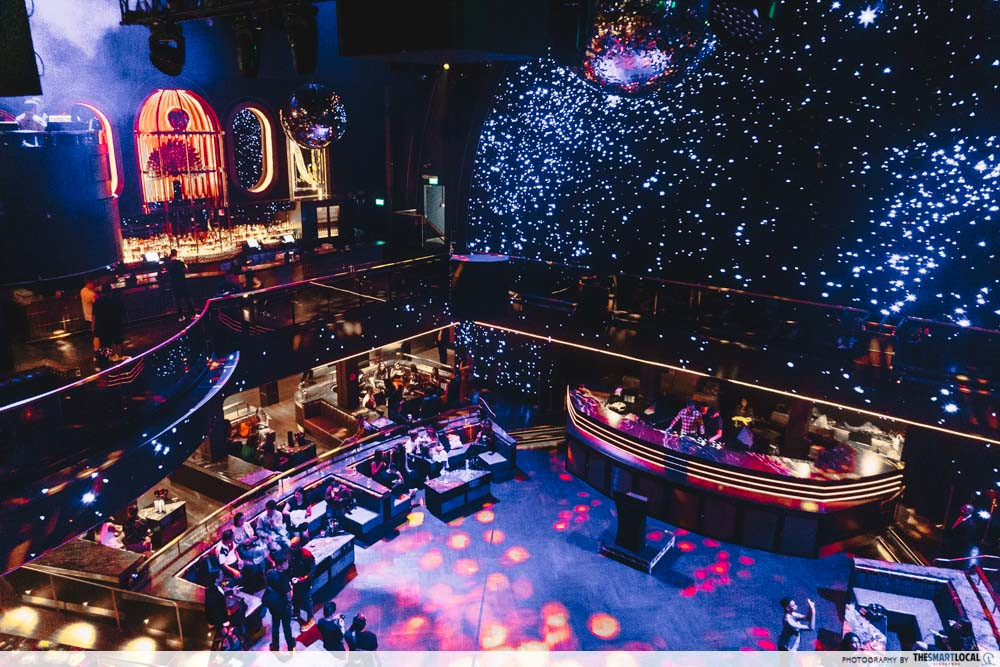 Their monthly lineup used to feature A-listers such as Tyga and Martin Garrix.

After opening in 2019, this bi-level mega-club quickly became the place to be for those who like electronic music and famous DJs. Tiesto used to spin semi-regular sets and Zedd stopped by when he wasn’t busy in Vegas. Not to mention, Steve Aoki has thrown cakes twice from the booth.

Technology is almost as big an attraction as the eclectic DJ lineup. The space is designed with your Instagram in mind – with a slide, a ferris wheel and an 8K screen that delivers the realest visuals. Needless to say, Marquee dominates Singapore’s nightlife scene.

As the club circuit has resumed to its full capacity, we’re hopeful for more legendary nights with bottle service, an all-star lineup, heart-thumping beats and a posh crowd.

If you find yourself outside of Marquee but EDM isn’t your cup of tea, it’s not too late to take a short walk to Avenue. Also located inside Marina Bay Sands and run by the same entertainment group, Avenue is the place to be for those who’d rather sway and bend knees to the beats of Hip Hop. 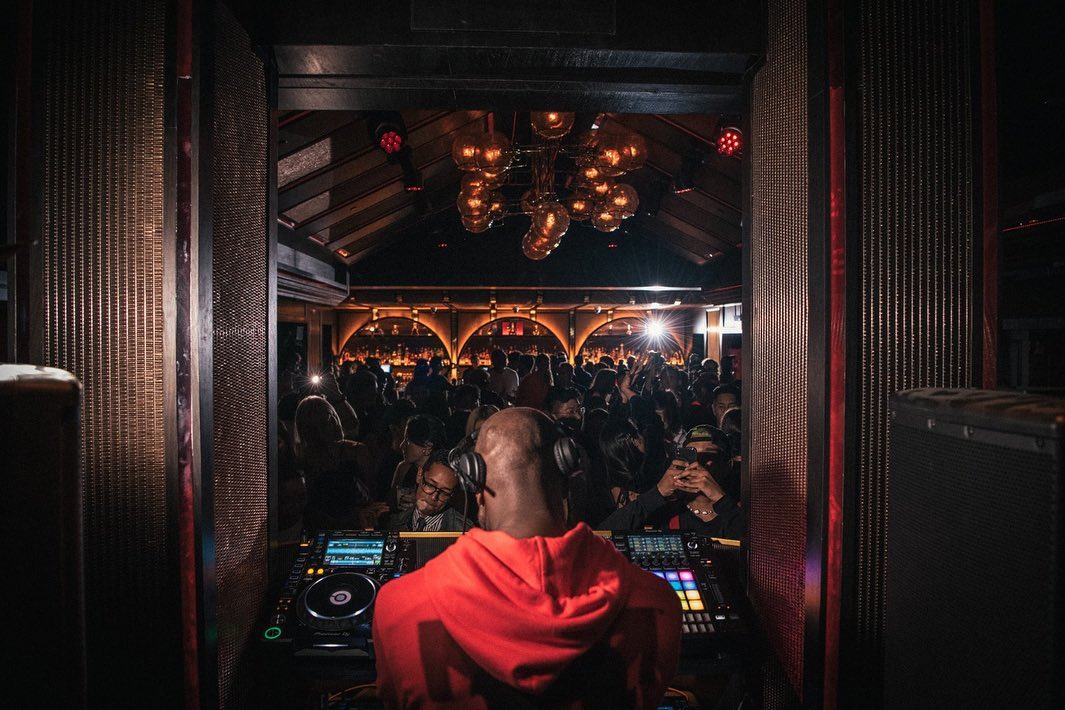 Here, expect to find games like 2 mini bowling alleys and a pool table, as well as a private room with a karaoke machine and a personal bar. Virgil Abloh was dropping deep tunes at its grand opening, which makes us believe huge headliners are set to spin here on the regular.

The dance floor seems smaller than most clubs in Singapore. But if you have a table or are invited to one, feel free to clamber onto the sofa and twerk away. 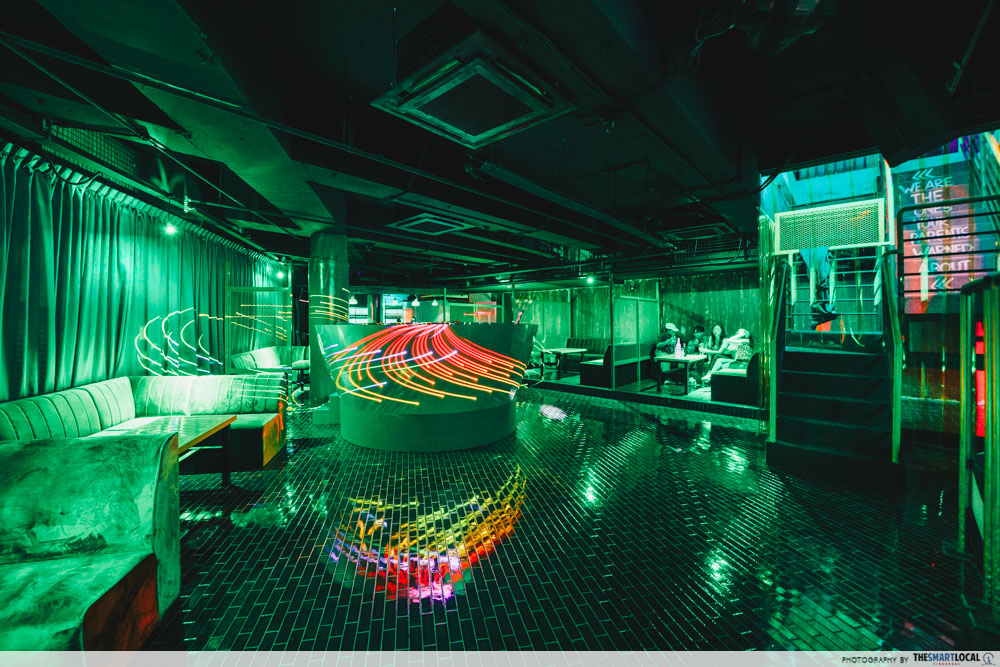 Located in the basement of the Concord Hotel & Shopping Mall, the club came through dripping in funky artwork, sculptures, and HDB-inspired dance podiums. LED-lit panels line the walls and old-school chess tiles cover the ceiling too, so it’s a photo op at every corner. 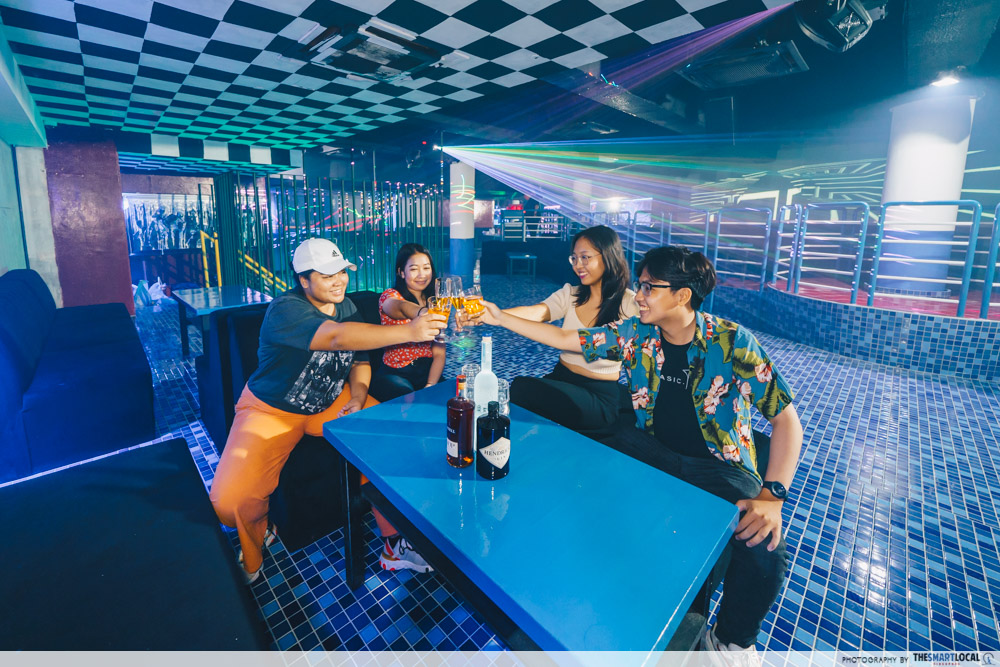 As for the music, Drip offers underground house and EDM in the main Drip Room, but often spices things up with some hip hop and top 40 hits in the Salt Room.

We’d be remiss if we didn’t let you in on this juicy secret. A bomb is about to be dropped on the Singapore’s nightlife scene, and it goes by the name of Luxe.

Taking over the space that was previously occupied by Bang Bang and Lulu’s Lounge, Luxe is giving us true Vegas vibes. An illuminated entry tunnel, kinetic light art installation, and solid sets by EDM headliners like Quintino are some of the wow-factors to look forward to.

Not much info has been released but we’ll keep you posted.

We’ll cut to the chase here: there’s no conversion clinic on Neil Road. What you might have walked past or seen floating on social media is a club where the LGBTQ crowd comes to play. 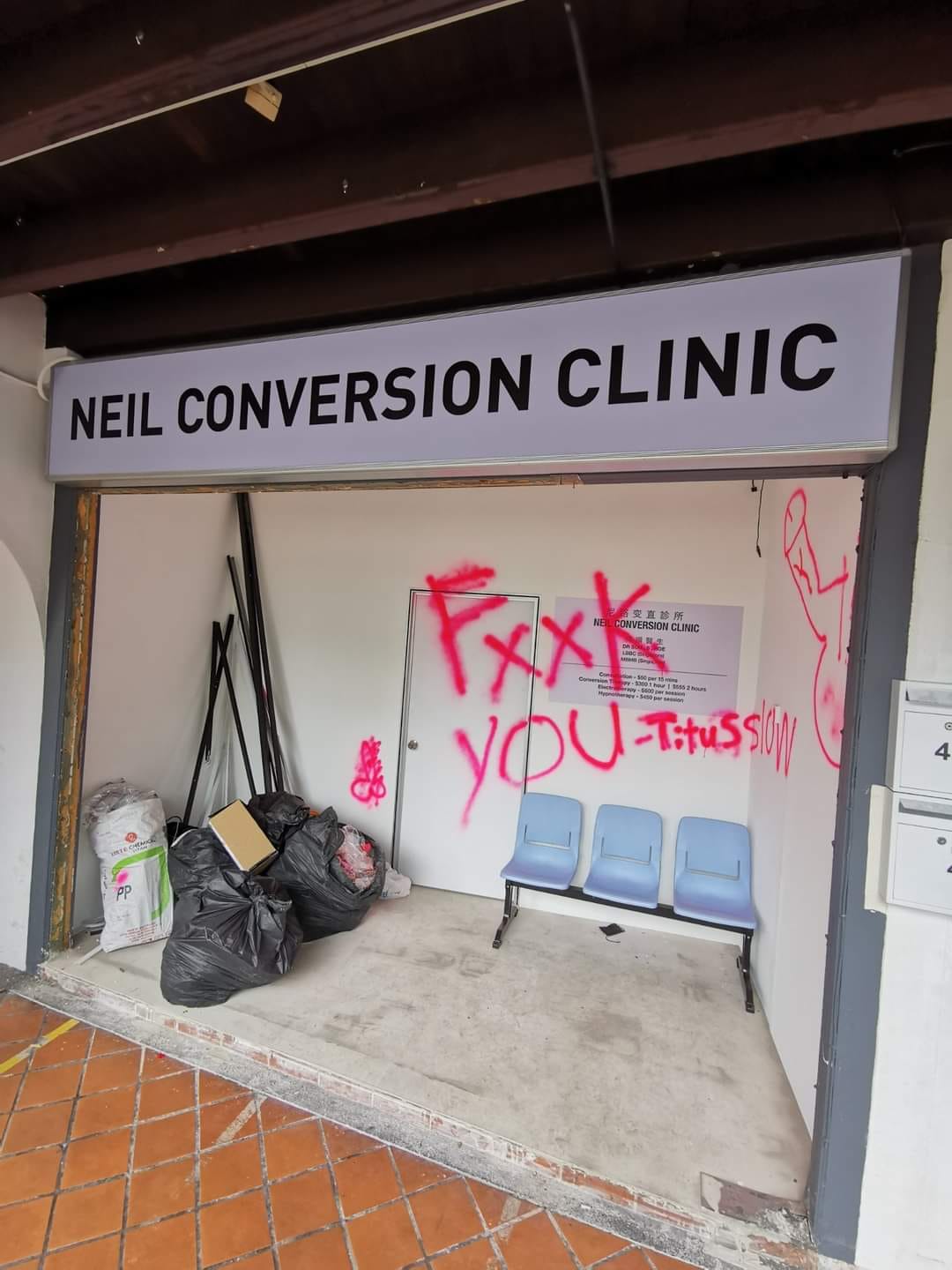 Once you get past the initial shock by the The Clinic’s front, proceed to the back where quirky graffiti wall arts, drag shows, and stiff drinks await. Martinis start at $16 a glass, but go for a cocktail jug ($60) and share it with your squad.

The raucous party at The Clinic only kickstarts around 11pm so, by all means, stay.

When it comes to nightclubs, Zouk is always a safe bet. It has 3 rooms dedicated to different types of music. While Phuture blasts mostly Hip Hop and R&B, Capital serves up old school Pop, House and Electronic. Queen, on the other hand, is a more lowkey cocktail bar where you most likely won’t have to yell in your friend’s ears over the loud music. 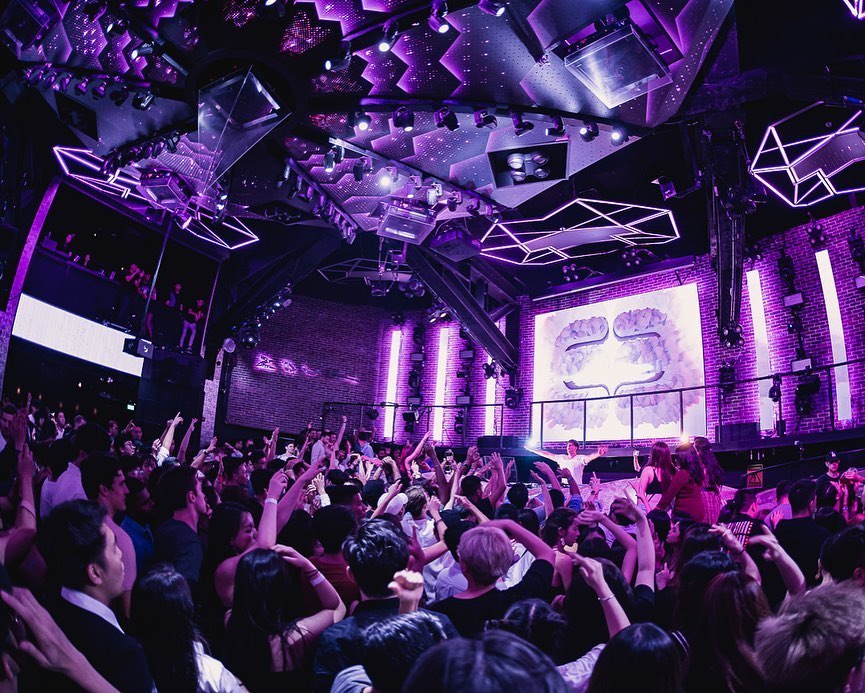 For most of last year, Zouk was a cinema, a spin studio and a restaurant. But come Wednesday 20th April, it’s going to kick off as a club where you can take it to the dance floor, bounce from room to room and fist pump your night away.

There’s more to Clarke Quay than just dive bars, Zouk and Haidilao. There’s also the buzzing Yang, where you can grind to the beats of your favourite K-Pop tunes and Top 40 hits. 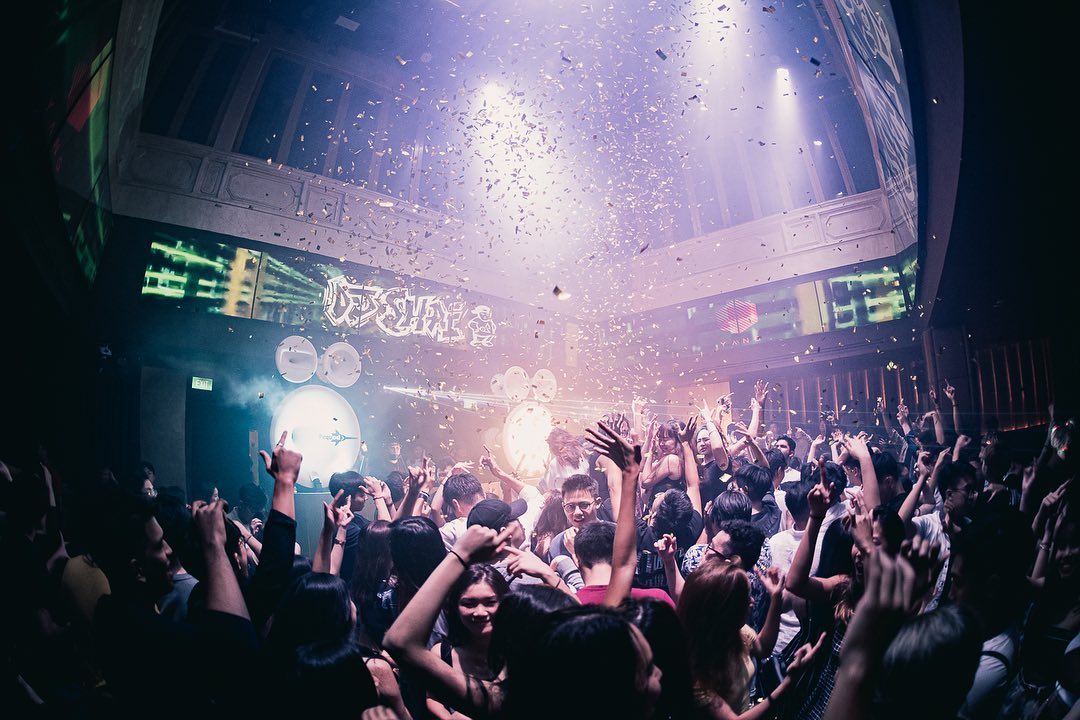 This lavish nightclub has plenty of charm with its plush blue couches, a golden cage-like dance platform and velvety purple curtains. On deck is usually a lineup of local DJs with the occasional international headliners covering anything from Electronic to Hip Hop.

If you haven’t made any plans for 20th April, hit Yang up and drop it low on the dance floor. Just remember to make a reservation in advance.

CE LA VI might be a little smaller than other clubs, but that only adds to the energy and atmosphere at this ultra-modern rooftop lounge. 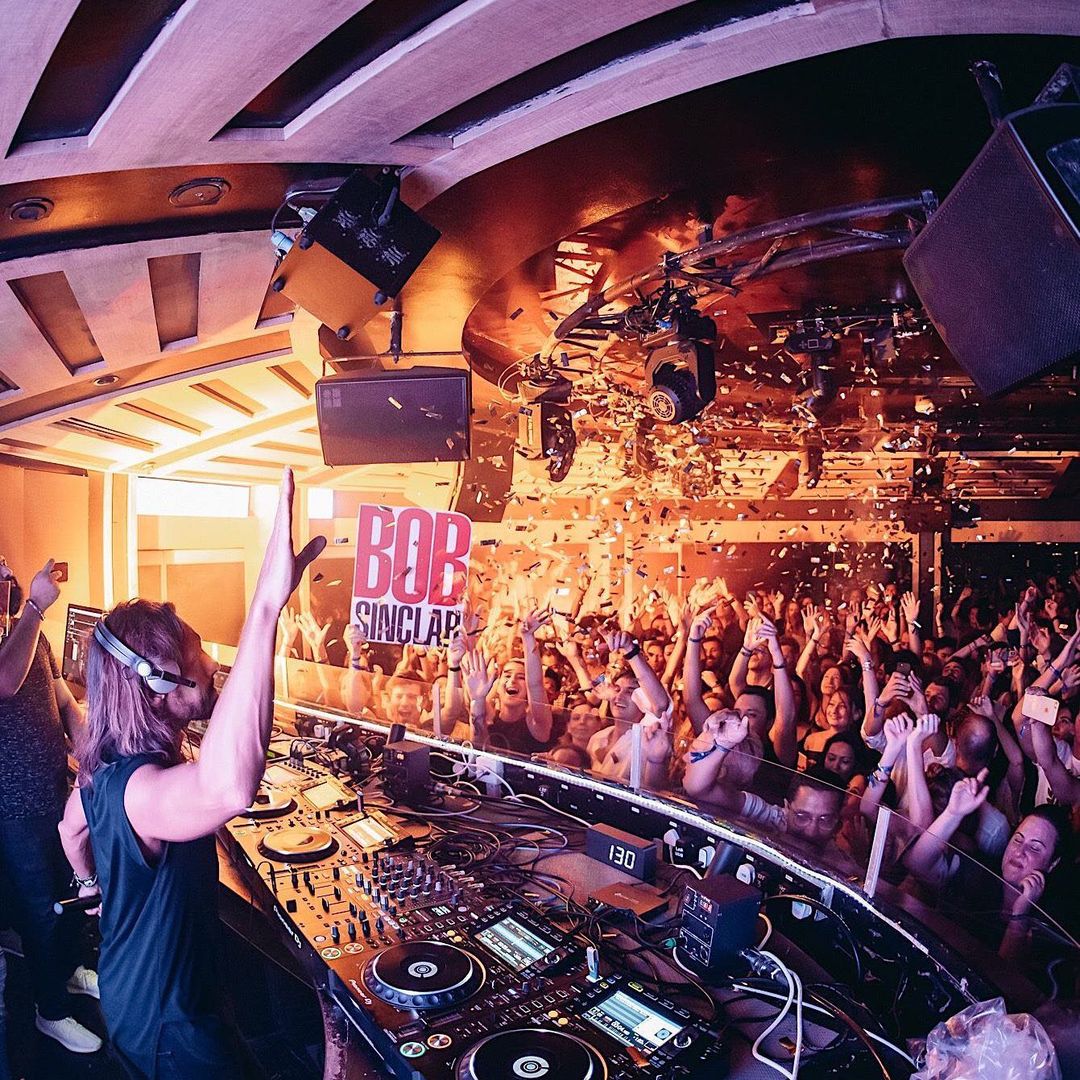 Between Sam Smith and David Beckham, it’s clear that this poshy lounge is where international A-listers used to frequent and where you can camp out to get a pic or 2 with celebrities. DJs spun a mix of new wave Electronic, oldie Hip Hop and down-and-dirty RnB, while the crowd sipped on drinks and admired the panoramas of the city skyline 57 floors above the ground.

Every Wednesday for Ladies’ Night, if you’re a fan of wine and Prosecco, swing by for $15++ per glass between 5pm – 11pm.

Don’t let anyone tell you there aren’t any good late-night spots in the CBD. Tucked away on Cecil Street, Cherry Discotheque is lit until 3am most night. Here, you’ll be able to catch live DJs, groove to the beats of Top 40 jams and order cheap alcohol with a side of fried popcorn chicken. 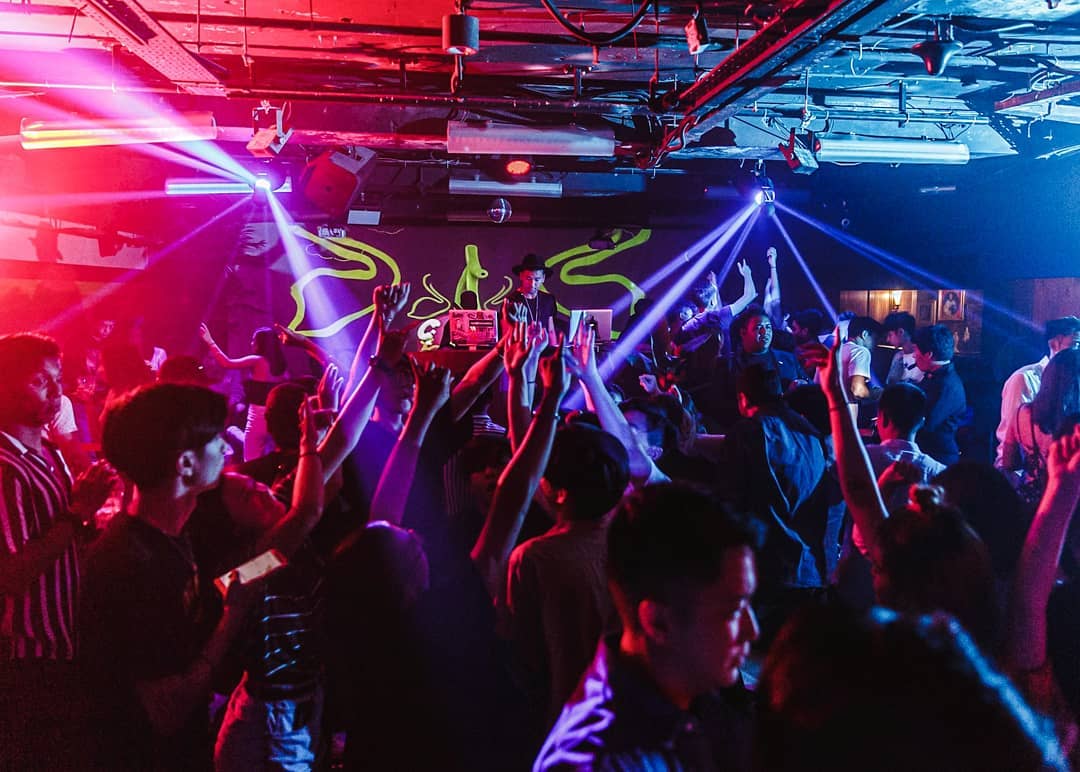 Swinging its door open on 19th April,  unless you have a table reservation, you’ll be waiting in line with gaggles of girls singing to 50 Cents’ classics. Judging from the look of the younger crowd in sneakers and shorts previously, it’s safe to assume Cherry Discotheque is a stomping ground for the newly legal undergraduates.

But that doesn’t mean you shouldn’t swing by for some reasonably priced drinks, 90’s Hip Hop and Reggaeton.

For a grungy dungeon-like club with some of the best Deep House and Techno tunes, make your way to Headquarters By The Council. 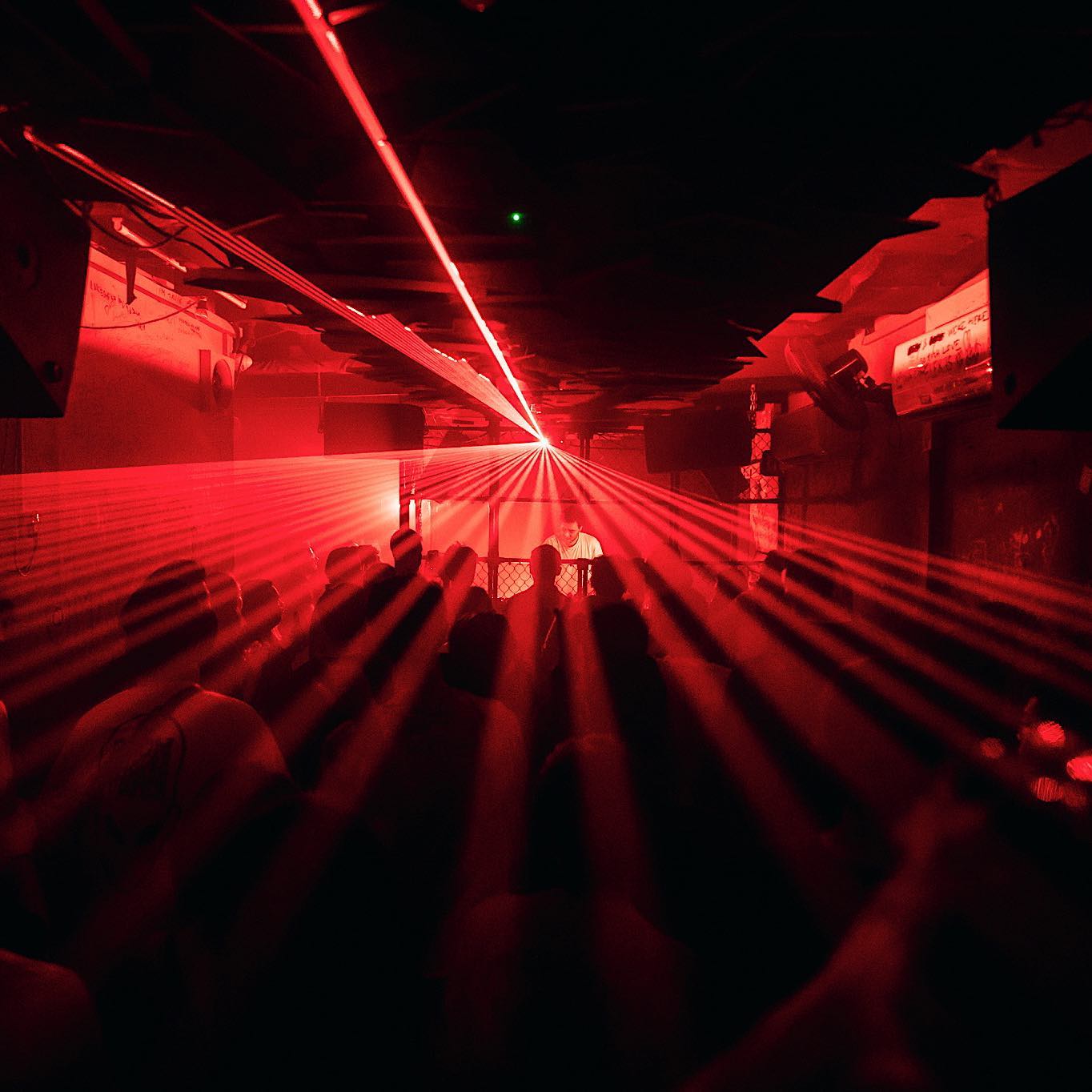 There are no flashy dancers, trains of champagne and bottle services here. Once you descend the staircase into this underground space, you’ll be greeted by a rave crowd who passionately sways to the throbbing tech-house tracks spun by a lineup of both established local and international DJs.

If you need to give your ears and eyes a break, head to the upstairs space for some fresh air, chill vibes and sizzling hot wings.

We had no problems forking out big bucks to cover our clubbing expenses back then and we certainly won’t now. However, there are a few things you can do to save some money and still do it big.

1. Pregame prior to going out

Whether you’re heading to a lowkey bar in Clarke Quay or the swanky rooftop of Marina Bay Sands, a night of paying for booze might burn a hole in your back pocket. Well, here’s a solution: pre-drink at home. 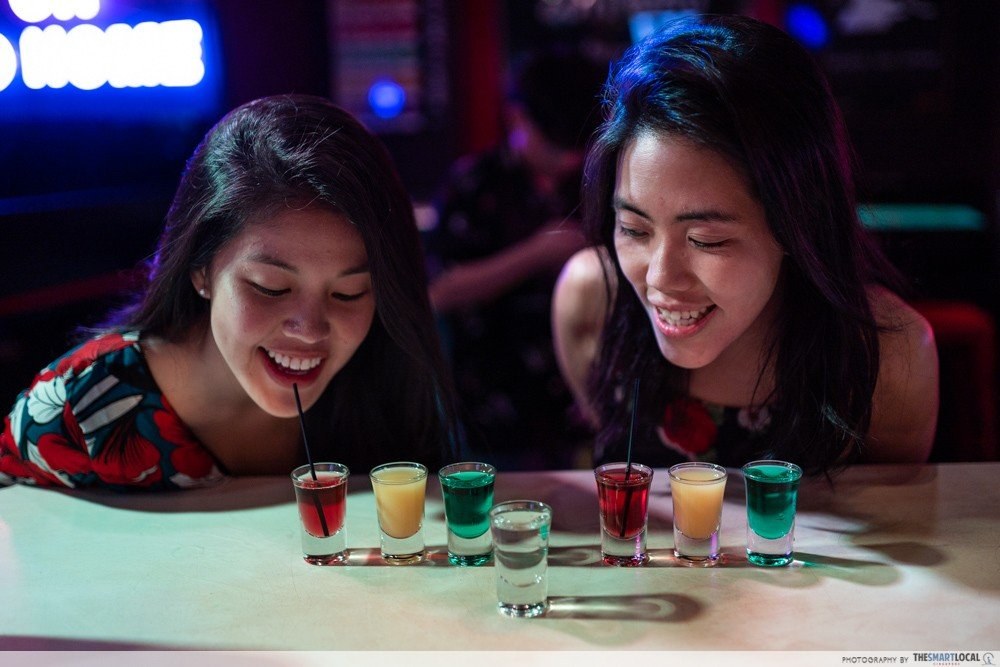 Buy your party a bottle of vodka, tequila, gin – whatever you like – and bottoms up prior to going out. Not only will it give you a good buzz, it’ll also hopefully reduce the number of drinks you’re planning to order. Just make sure you won’t overdo it and get wasted before even reaching the club.

To get the party started, here’s a list of all the affordable alcohol shops so you can stock up on bottles.

A trip home from the club can be a pricey one, somewhere between $20-$30 or more due to the after-hours surcharge. Since you’d rather spend that money on another round of shots at the bar, you might want to consider pre-planning your ride home. 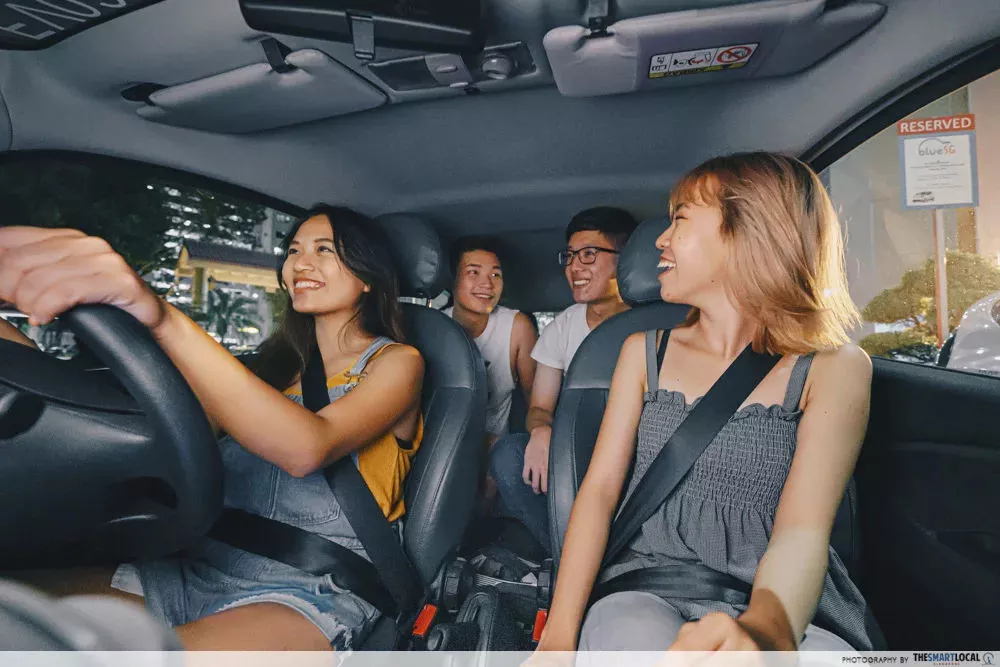 There are a few options: have a designated driver AKA a sober sister in your group who doesn’t drink but still wants to join the party to drop you off at home; book a Grab Hitch in advance; or wait for public transportation to resume at 5.30am. However, the latter might require some serious willpower and a lot of energy drinks

3. Befriend the doorman for free entry

After almost 2 years of being out of business, clubs are in the mood to make some money. So don’t be surprised if there are no complimentary guest lists or free drinks for ladies. However, that doesn’t mean you can’t try to weasel your way in without paying. 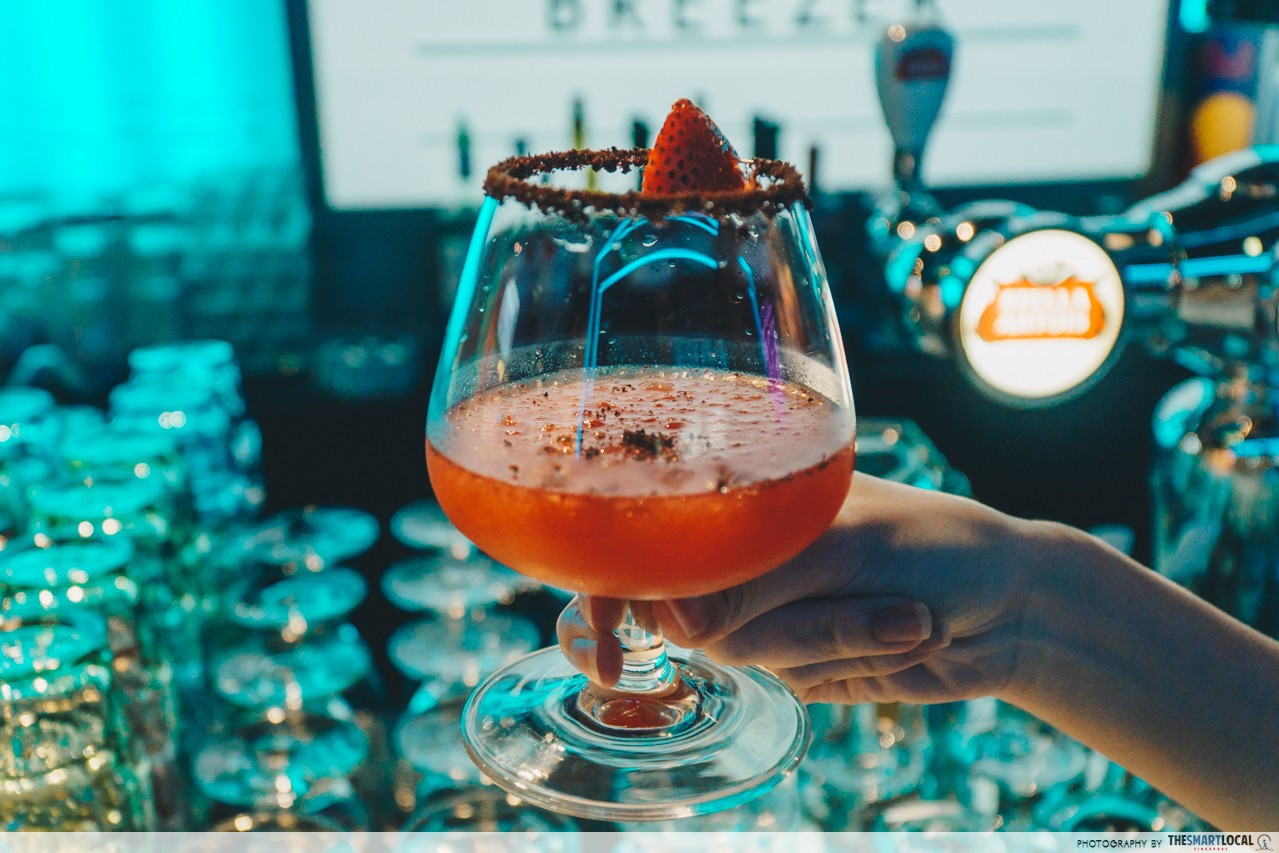 When it comes to clubbing, if you can’t afford to make it rain on expensive bottles, you’ll need to make friends with the right people in order to get freebies. Think club managers, bouncers and door hosts or hostesses. These are the people who have the power to let you cut the line, skip the cover charge and waltz in even when the club has allegedly hit its capacity.

They also have something called drink tickets which can get you comfortably drunk at no extra cost. As the saying goes, it’s not about what you know, it’s about who you know that matters.

Plan a night out at the best clubs in Singapore

Whether you’re a homebody or a party animal, you’ll probably want to blow off some steam and check out the nightlife scene that was once extinct. If that’s the case, bookmark these venues and mark your calendar.

Then, round up your squad, book a table, sort out your tickets and have a good time. You deserve it.

For more things to do this weekend: 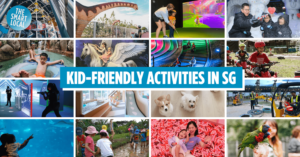 52 Kids Activities To Do In Singapore For Every Weekend Of The Year
10 Best & New Hotels In Malacca From $46/Night, Like Restored Shophouses & Luxe Modern... 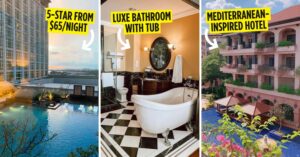