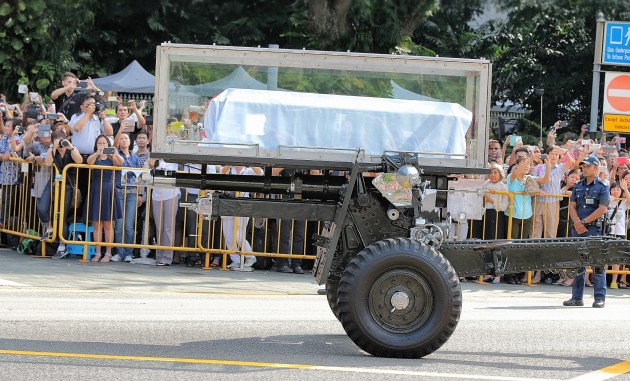 Mr Lee Kuan Yew has been called many things – statesman, diplomat, legend, sage. But to us Singaporeans, he was simply our Lee Kuan Yew. A man without equal, he stood alongside world leaders and gave advice to kings and queens. Yet, he continued living a frugal life without ever losing his touch with the people of Singapore. The house he lived in was proof of that. 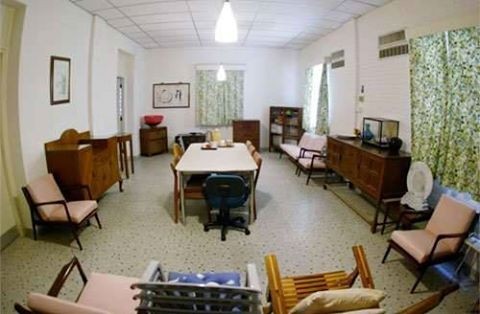 I took it upon myself to do at a little tribute to Mr. Lee, by going out early to secure a spot near the Istana to capture images of the funeral procession, as it made its way to the Parliament House. I joined the queue with friend and his siblings to pay our respect at the Parliament House, where Mr. Lee has come to rest.

The queue may have been 5 hour+ long under hot sun (it gets longer as the day progresses) but it was the very least we could do to pay our respects to Mr. Lee. The mind boggling turnout at Mr. Lee Kuan Yew’s wake is testimony to his immense popularity, not only locally but which also extended far beyond our shores.

Waiting For The Funeral Procession To Begin 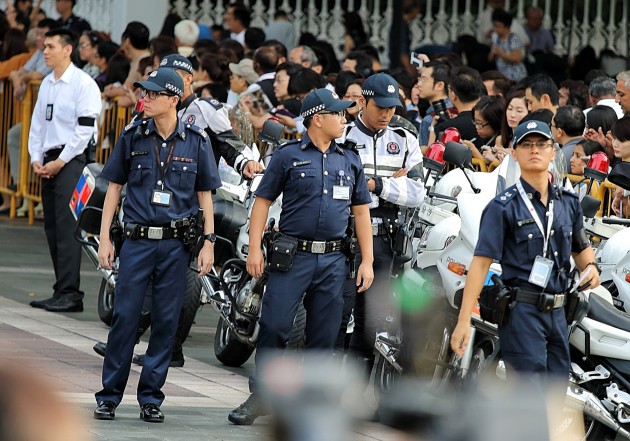 Locals and tourists gathered at the Istana gate to bid Mr. Lee a final farewell. 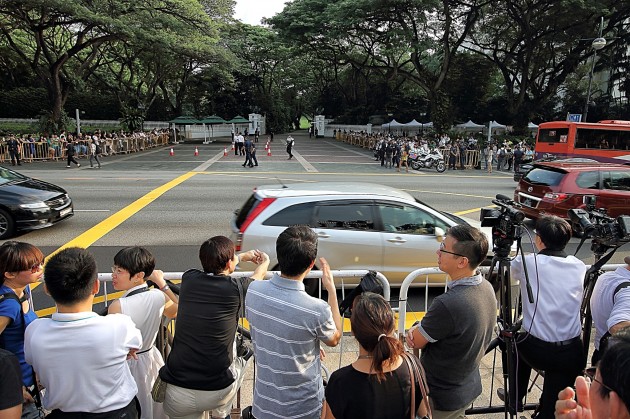 It was a sombre moment as the media and man on the street gathered together, waiting for the imminent appearance of Mr. Lee’s gun carriage. The traffic on the road thinned down as the road closed in phases. 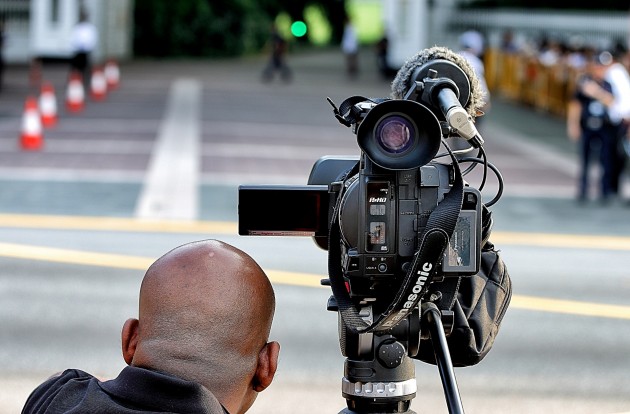 Media crew were on standby, ready to record the funeral procession for posterity. 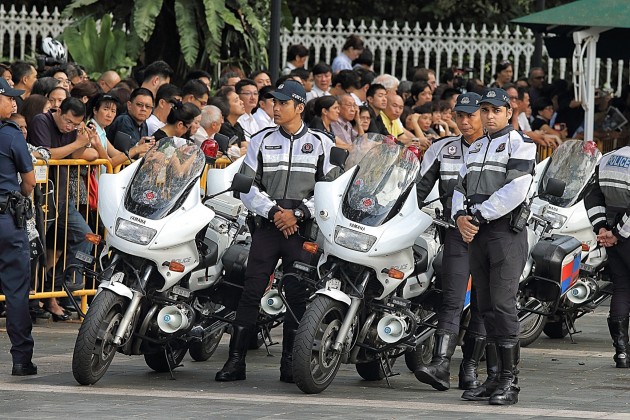 Mr. Lee’s motorcade was on standby, waiting for orders to proceed. 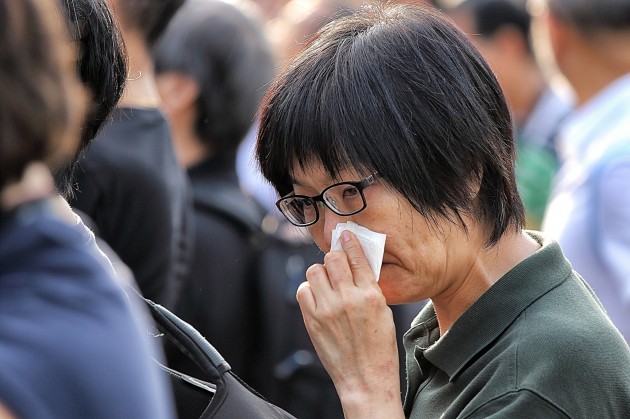 The prevalent mood of many who turned out to see Mr. Lee’s final departure from The Istana. 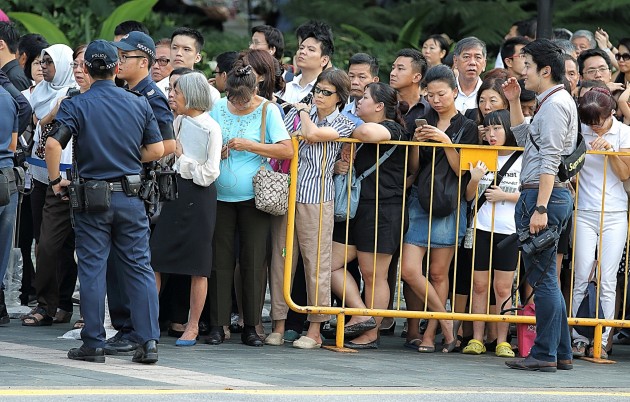 Young and old, they came. And this is just the early morning crowd. The surge in crowd later in the morning was immense. No event manager could ever fully prepare themselves for this. But it was handled extremely well. 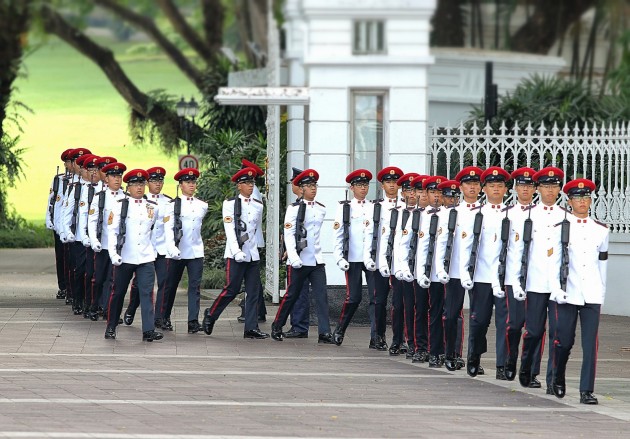 The arrival of the guards of honour signalled the funeral was about to start. 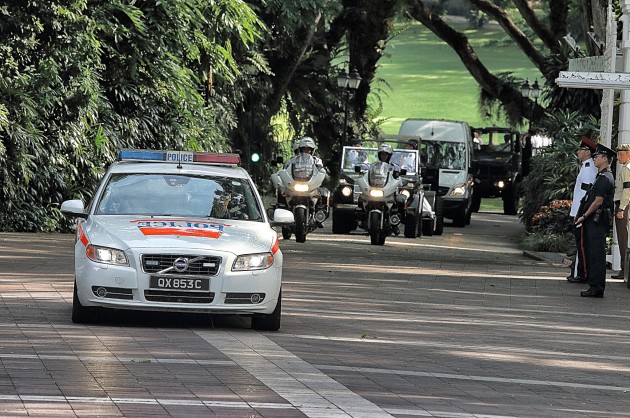 The funeral procession commenced, as it left The Istana gate. 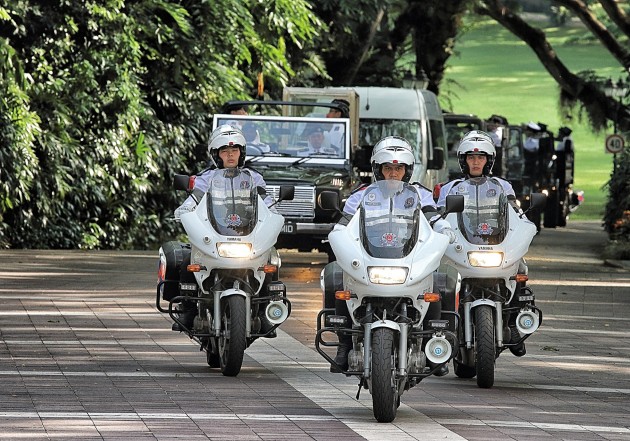 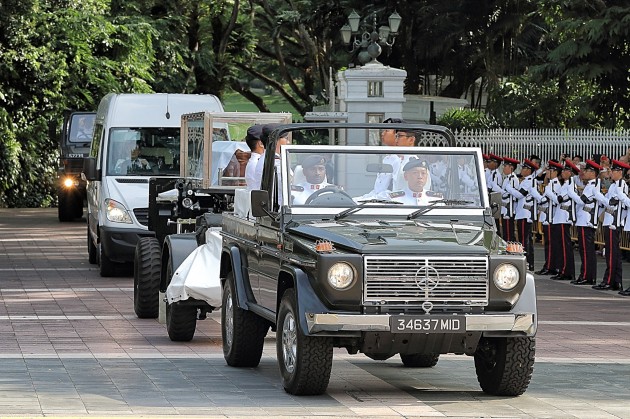 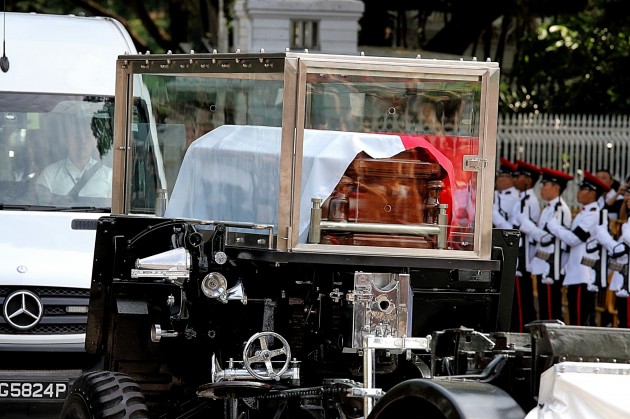 Mr. Lee Kuan Yew’s coffin with our national flag draped over it. The pace is deliberately slow so everyone could have a good glimpse of it as it passed by.

Another angle of the gun carriage for a clearer perspective. 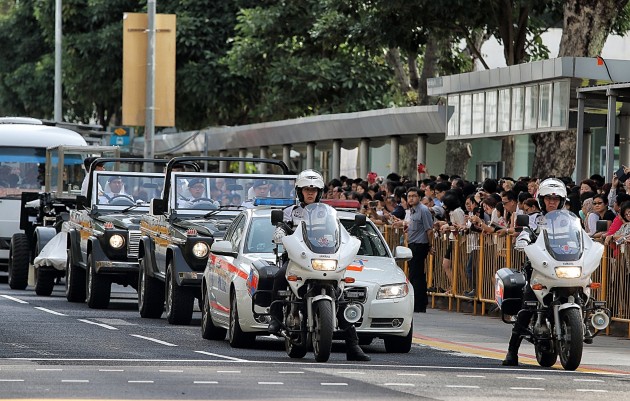 The procession neared the Parliament House, where Mr. Lee’s body was laid for the public to pay their last respects. 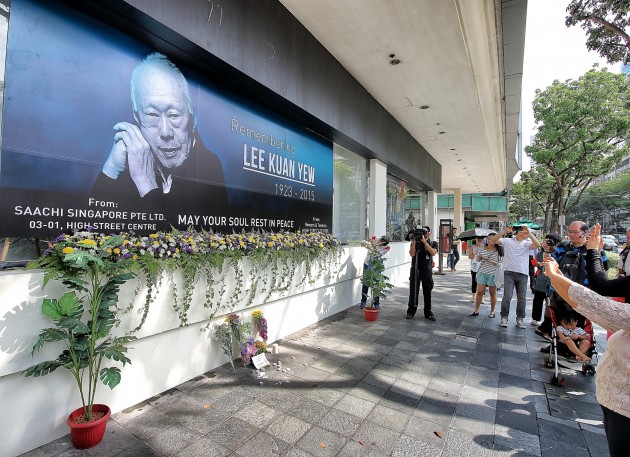 A banner fronting North Bridge Road by a private company in remembrance of Mr. Lee. 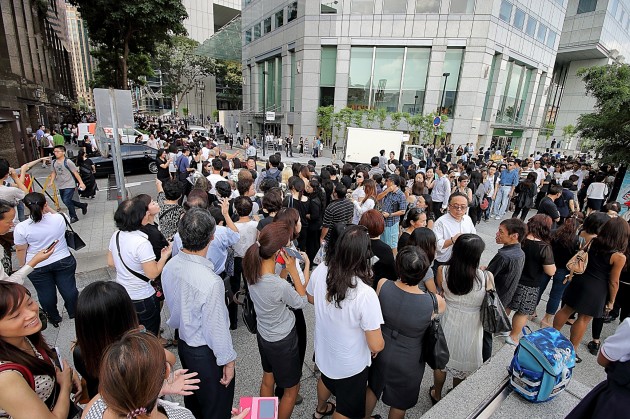 A small section of the crowd thronged the vicinity, forming up long snaking queues that some estimate could reach Malaysia. 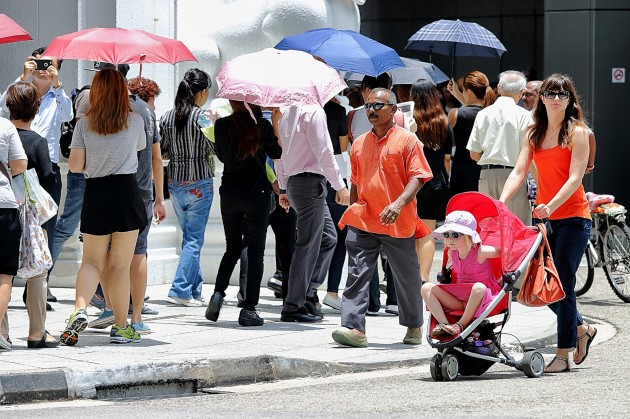 They came, even from beyond our shores. This is testimony to the immense popularity of Mr. Lee Kuan Yew. I even spotted an old tourist couple asking the funerals officials where should they join the queue. 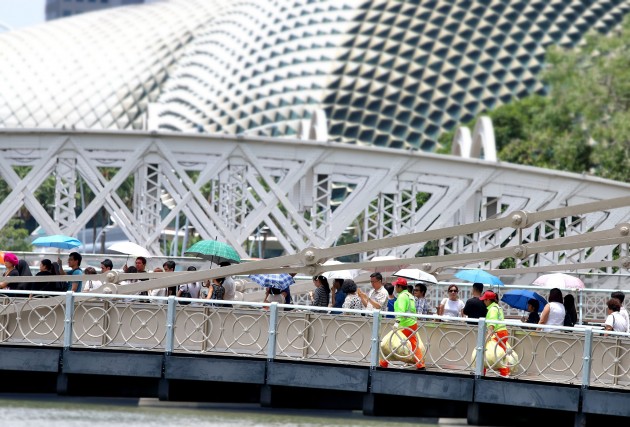 Typical of clean and green Singapore, the cleaners were out in full force to clear trash. There wasn’t trash thrown about everywhere, just empty water bottles disposed properly at their disposal points. For once, I was proud of Singaporeans in this aspect. 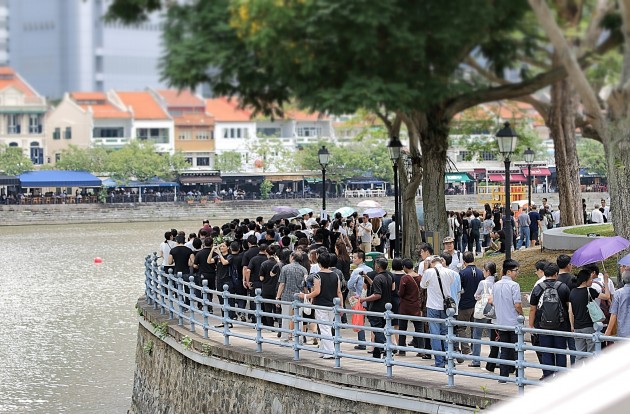 I was relieved when the queue reached this point, as I had already queued at least 4 hours. From here, it was another 1.5 hours to the Parliament House. It was well worth the time and people gladly stood in line to pay their respects to our nation’s founding father. 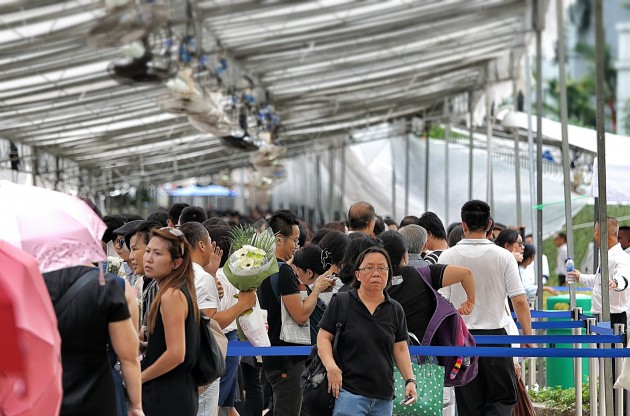 We made it to the Parliament House security check point. At long last, the long snaking we endured was over. From this point onward, it was just another 30 minutes till we reached the inside. I was unable to upload any more pictures hereafter as photography is not allowed here.

How To Pay Your Final Respects

For all who want more info on the funeral updates, please click here. Do take note that that are changes along the way and do keep updated via official media on television or radio broadcasts.

Farewell, Mr. Lee. 50 years ago, you wept for Singapore. 50 years later, the nation you built weeps for you. Rest in peace and may you reunite with your beloved wife Choo, in eternal bliss.

The photographs used here are copyrighted and all rights are reserved to Jensen Chua.

0
SHARES
ShareTweet
My First-Ever Air Yoga Experience. Here’s How It Went.
The Knolls Has A Chocolate Wonderland & Tea Buffet Till 24th May 2015