Yoga – More Than A Passing Fad 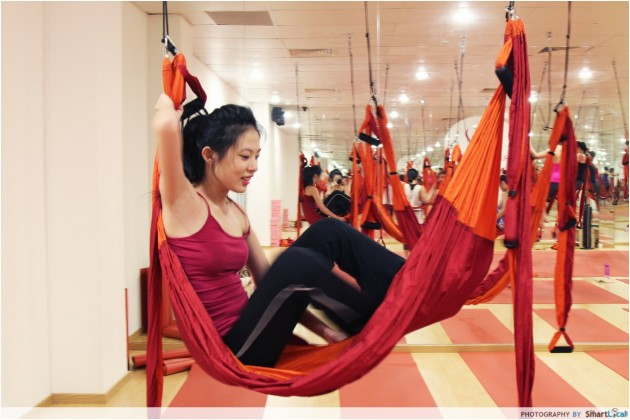 Unlike other trends like hello kitty or overpriced froyo, this might just be Singaporeans’ healthiest obsession yet. It’s public knowledge that yoga comes with a multitude of health benefits for the body and mind, but were you aware that it also helps you fight food cravings better? Now we can all stop making bad decisions after 11pm.

As a terribly inflexible person with the attention span of a goldfish, finding inner peace whilst in an uncomfortable position sounded implausible. But when given the opportunity to try out hot yoga and suspension yoga, I was excited to stretch my limits! Besides, you don’t say no to anything that defies gravity. 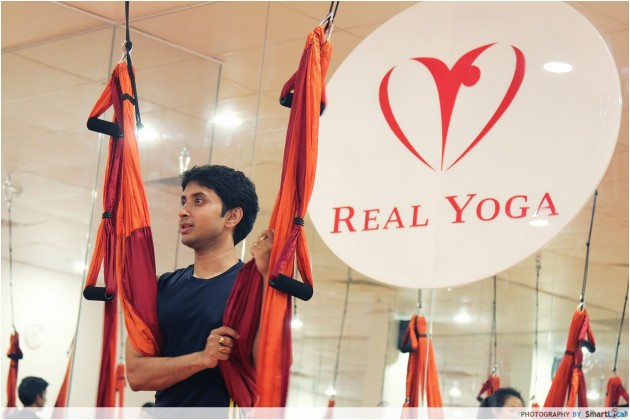 Anti Gravity Yoga is a workout that incorporates a hammock in traditional yoga poses. Completely clueless, I googled it and found images of people being peaceful in a cocoon-like cradle. Hey, that’s totally something I can do! 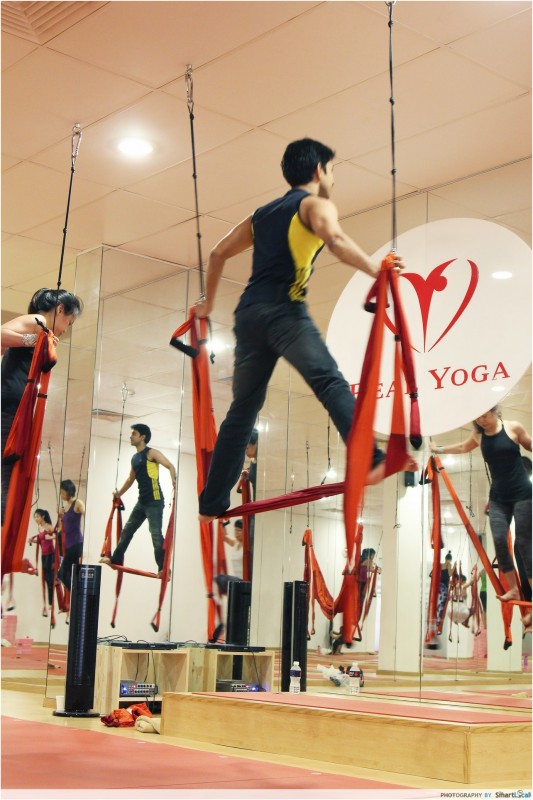 While the instructor demonstrated every single motion required to achieve the more challenging poses, my jaw dropped. “That’s not happening,” I mouthed to Amanda beside me. But it was about to. The instructor, who’s done being a total acrobat now, guided me through a complex series of twists and turns. Before I know it, the whole world was upside down.

At the start of the class, the instructor emphasized the importance of trusting our props. But because I was busy being a wide-eyed ball of excitement, I didn’t register that until the most intimidating moment arrived just as I was beginning to feel pretty pleased about myself.

“Okay, now let go of the hammock and free your hands!” 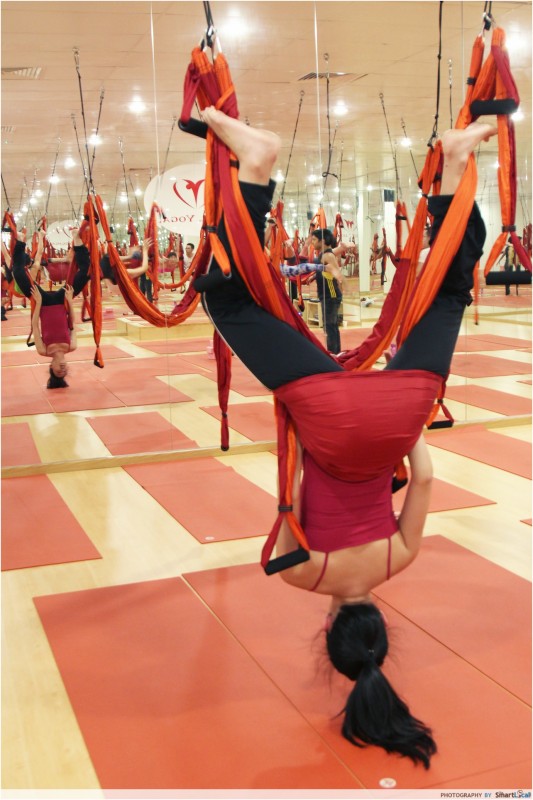 What?! After I’d exhausted heaps of courage getting into that position, it seemed unthinkable to lose grip of the hammock and trust my life with its sheer strength. I contemplated abusing my beginner’s privilege to skip this step and simply observe, but part of me was dying to discover my limits. So I went for it.

The moment I freed my hands, my heart dropped and an intense split second of “OMG I’m falling!” followed. Once I’ve recovered, I began to enjoy few minutes in the life of a bat – uncomfortable but incredibly liberating. 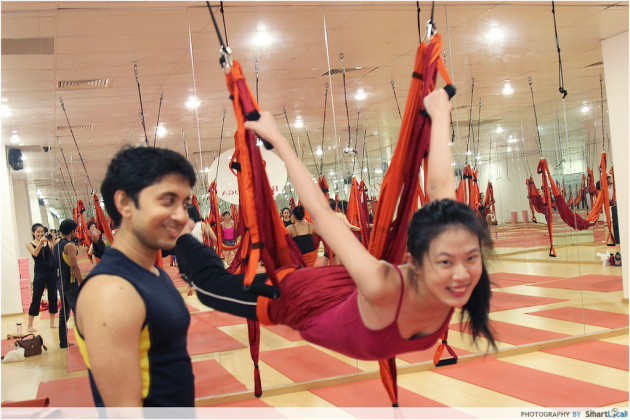 Honestly, this isn’t the most ideal introductory lesson for those who lack stamina. But I’d highly recommend it because it’s a lot of fun for a beginner to pop her Yoga cherry whilst being suspended from the ceiling upside down. 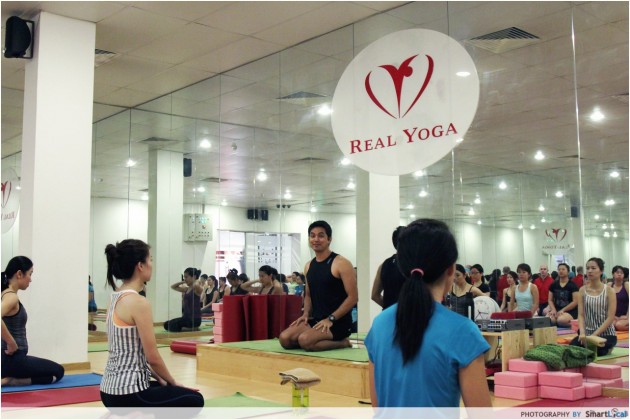 “What’s hot yoga like?”, was the question Amanda and I asked our colleagues before heading down. The unanimous response we received was most helpful – “You’re both gonna sweat like pigs!” But they were right. 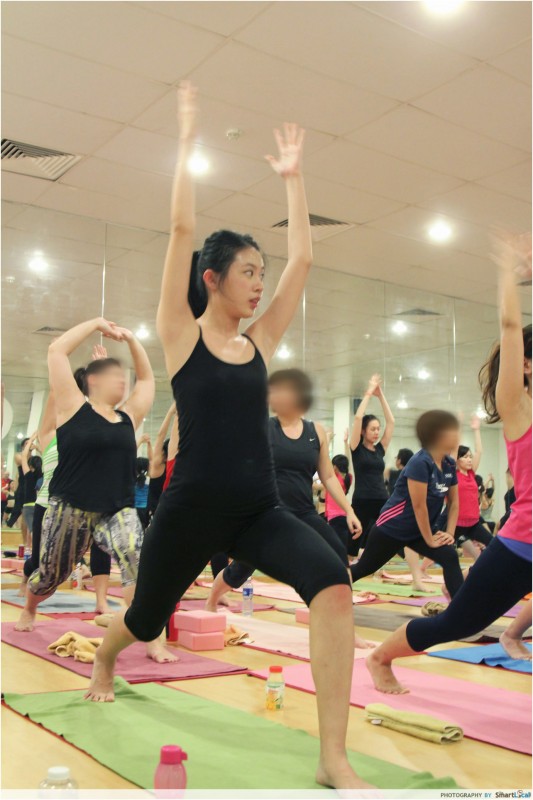 In Hot Yoga, the room is heated at a rising temperature from 37 degrees onwards to detoxify, reduce muscle stiffness, improve blood flow and circulation. Our bodies began to acclimate to the temperature after some minutes. Still, the constantly climbing temperature made it strenuous for beginners like ourselves. “I feel like a dim sum,” I whispered to Amanda at one point.

The workout was exerting at times, but breathing properly throughout the workout helped. As one of the most popular classes in Real Yoga, the class was full and we could take few photographs. Also, if it’s your first time doing Yoga, inform the instructor so he can provide simpler alternatives for the more challenging poses. 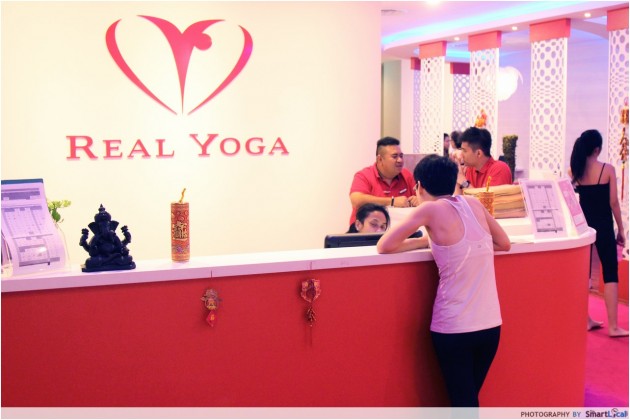 What I liked most about Real Yoga was the instructors’ professionalism. Being amongst other experienced learners at our first yoga class was daunting, but we were closely guided and specially attended to. On hindsight, the Anti-Gravity yoga session surely had the potential to be traumatizing, but turned out to be tons of fun thanks to the instructor.

Fully furnished with comfortable studios and equipped with shower and locker facilities, Real Yoga has 5 branches in Singapore, with an upcoming one at Parkway Parade. The studios open as early as 7.15am and close as late as 10pm, so members can easily practice Yoga, Zumba or Pilates before and after work.

For more information on their classes, head over to www.realyoga.com.sg.

It was hilarious as everyone screamed when the tigers jumped onto our “cage”. Not because of the close encounter but because water ⯑⯑ was dripping into our cage..onto everyone’s heads! LOL!! ⯑ #marariversafari #bali

This post was brought to you by Real Yoga.