Off / On exhibit at the National Museum of Singapore

It’s hard to imagine life without technology. For one, we’ve managed to populate the term “work from home”. And just to name a few pieces of indispensable tech in my WFH setup – I’ve gotten accustomed to my standing desk while clacking away on my mechanical keyboard.

If you’re one who appreciates how far tech has come, the National Museum of Singapore’s newest exhibit Off / On is a trip down memory lane. From retro mobile devices to escape room activities in the museum, here’s what you can expect from Off / On, happening from now till 30th October 2022:

Relive the 1970s & the evolution of technology in Singapore

Get a major throwback via the exhibit’s 4 zones, each documenting life in Singapore and the nation’s use of technology from the 1970s to the 2000s. Cue the “back in my day…” phrases as older folks step into the 1st zone: Work In Progress. It’s modelled after an office from the good ol’ days – a sight many grandparents and parents would be familiar with as the retro scene features bulky typewriters and physical paperwork. For fans of the “thock”, try typing on the typewriters to see if they sound just as good. Movie buffs and tech geeks have one thing in common here, if you’ve seen the film Jobs – Off / On has the OG IBM computer on display as well as the Apple II. 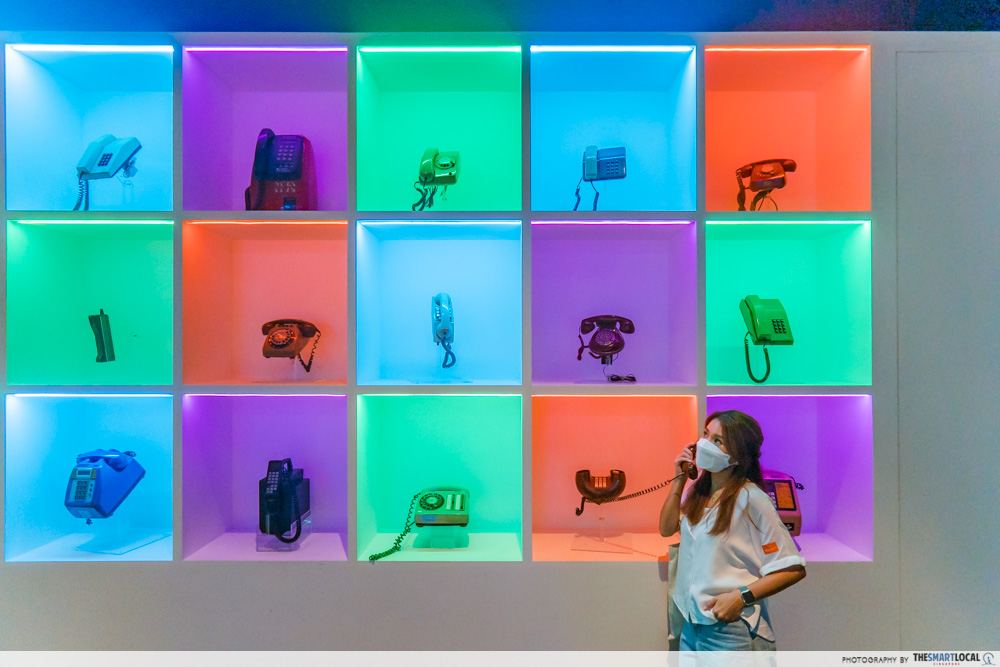 Peruse the 2nd zone, Hello Mobile, for what’s possibly our fave gadget of all time – our mobile phones. There’s a variety of rotary dial phones and payphones encased in colourful light boxes, each one is sure to ignite a memory from the yesteryears. 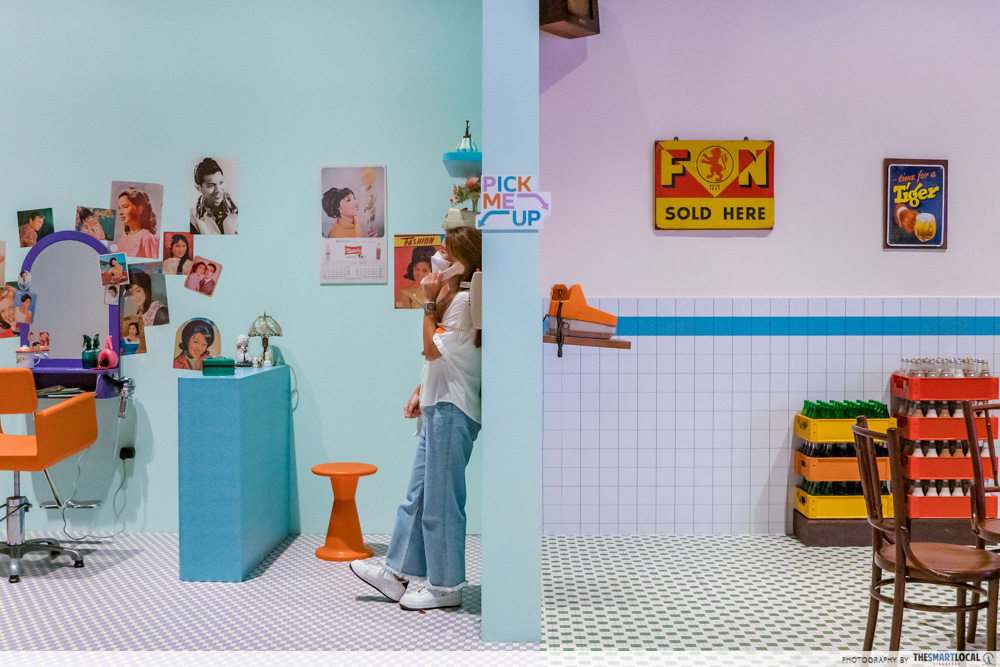 The phones aren’t just for show; pick up the receiver to listen in on how phone calls sounded like in the past.

It’s another blast from the past as the space resembles an old-school barbershop and kopitiam. For those who don’t know, these spaces were equipped with payphones for patrons to use should they need to return a call when pinged by their pager. You won’t have to look too hard to find IG-worthy nooks here. Leave a message via a giant pager and it’ll be flashed on the LED wall.

Remember the indestructible Nokia? You’ll find the iconic phone encased in one of the light display boxes here. You’ll also be able to leave a message on your desired handheld device of choice – a cellphone or a pager. VCRs were used to tape shows for rewatching at a later time.

The Art Of Living is where visitors can cosy up in a living room, a replica of the ones we’ve seen on iconic Channel 8 TV shows. The space focuses on the evolution of technology for entertainment, including boxy tellys and cassette players. Pro tip: use your digital companion to schedule a commercial or teletext service so you can skip the kiosk queues. 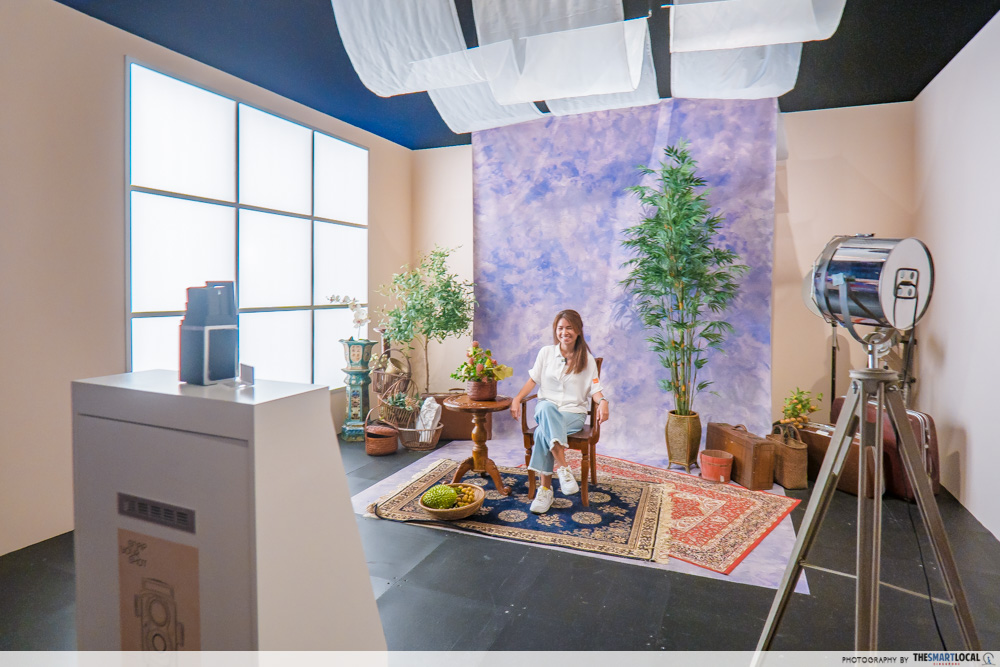 Gather your museum mates over at the studio area. Here, pose however you like with old-school props before heading over to a darkroom to retrieve your free photo keepsakes. After snappin’ some dapper pics, head over to the darkroom next door. Shutterbugs will be thrilled to watch a digital presentation of their B&W pics being “developed” before getting a digital copy for keepsakes. 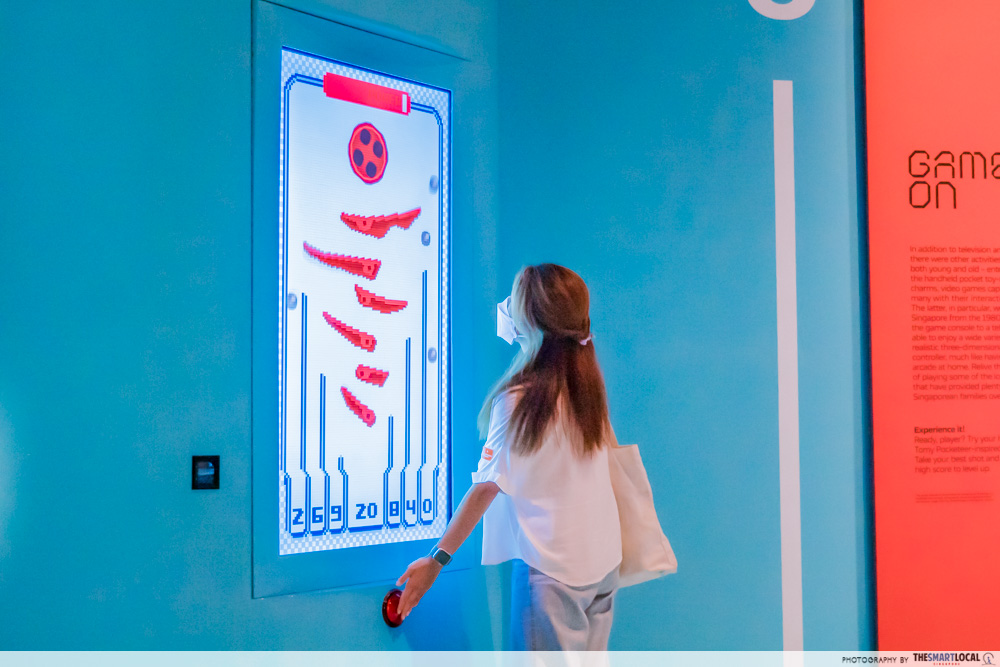 For the kiddos who’re too young to have seen payphones or typewriters, they’ll certainly get to familiarise themselves at the Game On zone. Inspired by the folks who made Tomy Pocketeers, the zone allows you to challenge your friends to a pinball-esque game to see who takes the top spot on the leaderboard. 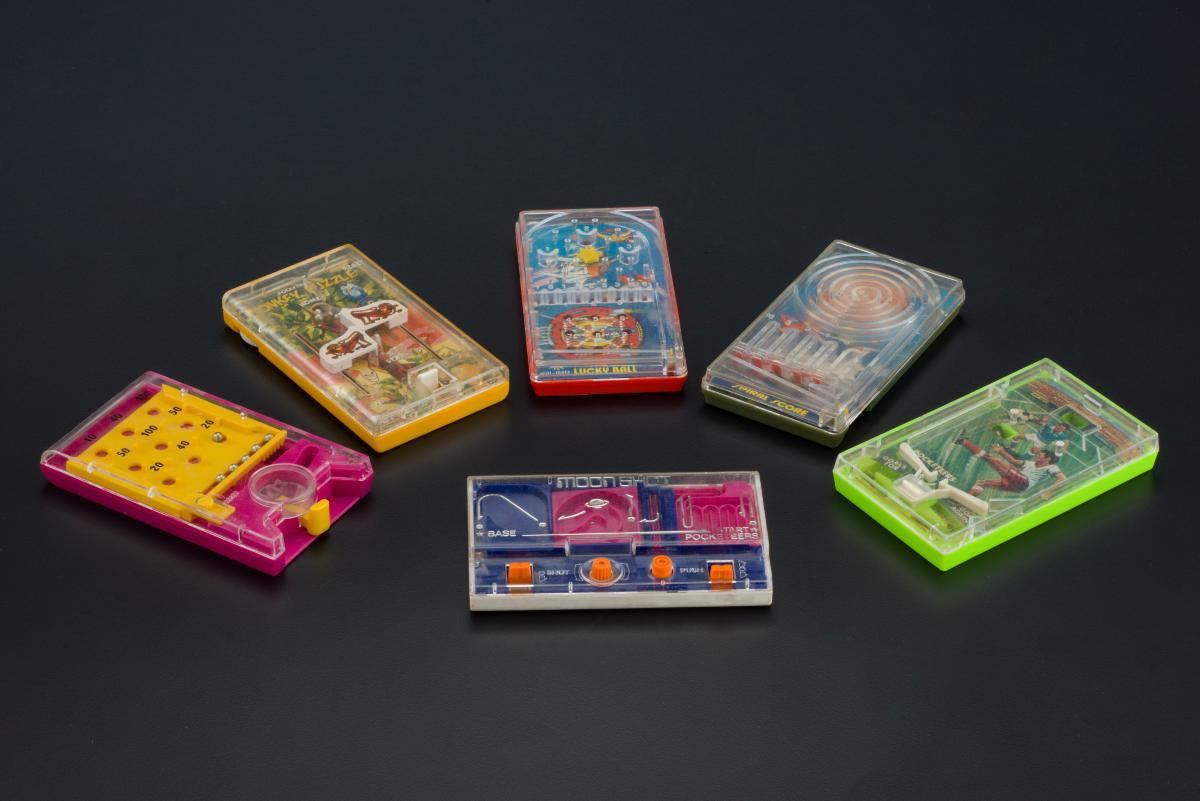 Tomy Pocketeers were the portable toys of the ’80s.
Image credit: Roots 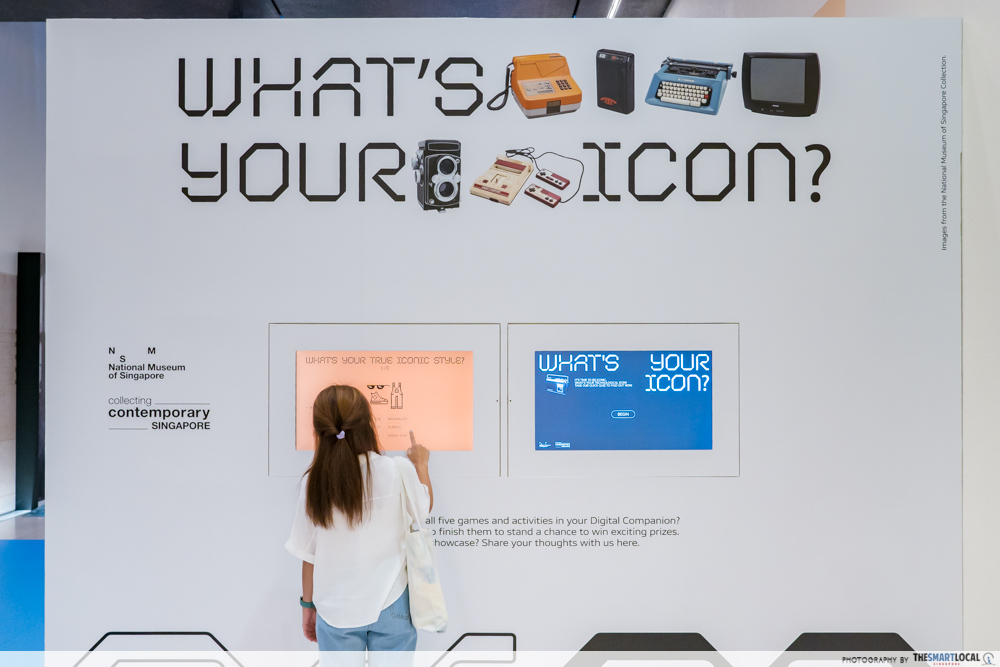 Find the quiz booth at the end of the exhibit.

If you love personality quizzes like MBTI types or Hogwarts house sorting, try the one by Off / On to see what tech icon you are. Answer 6 simple questions to get results ranging from a typewriter to a film camera.

After-hours escape room in a museum

Besides going gaga over the retro gizmos, you’ll want to stay tuned for An Escape Through Time. It’s a themed escape room conducted on the National Museum grounds, and the games take place after the exhibit’s operating hours a la Night At The Museum.

Family and friends are welcome to sign up in groups of 3-10 (from $12/pax) to solve puzzles and save technology from being switched off. Tickets will be released on 9th June 2022, so keep your eyes peeled on the National Museum’s website to cop the slots.

Visit Off / On at the National Museum of Singapore 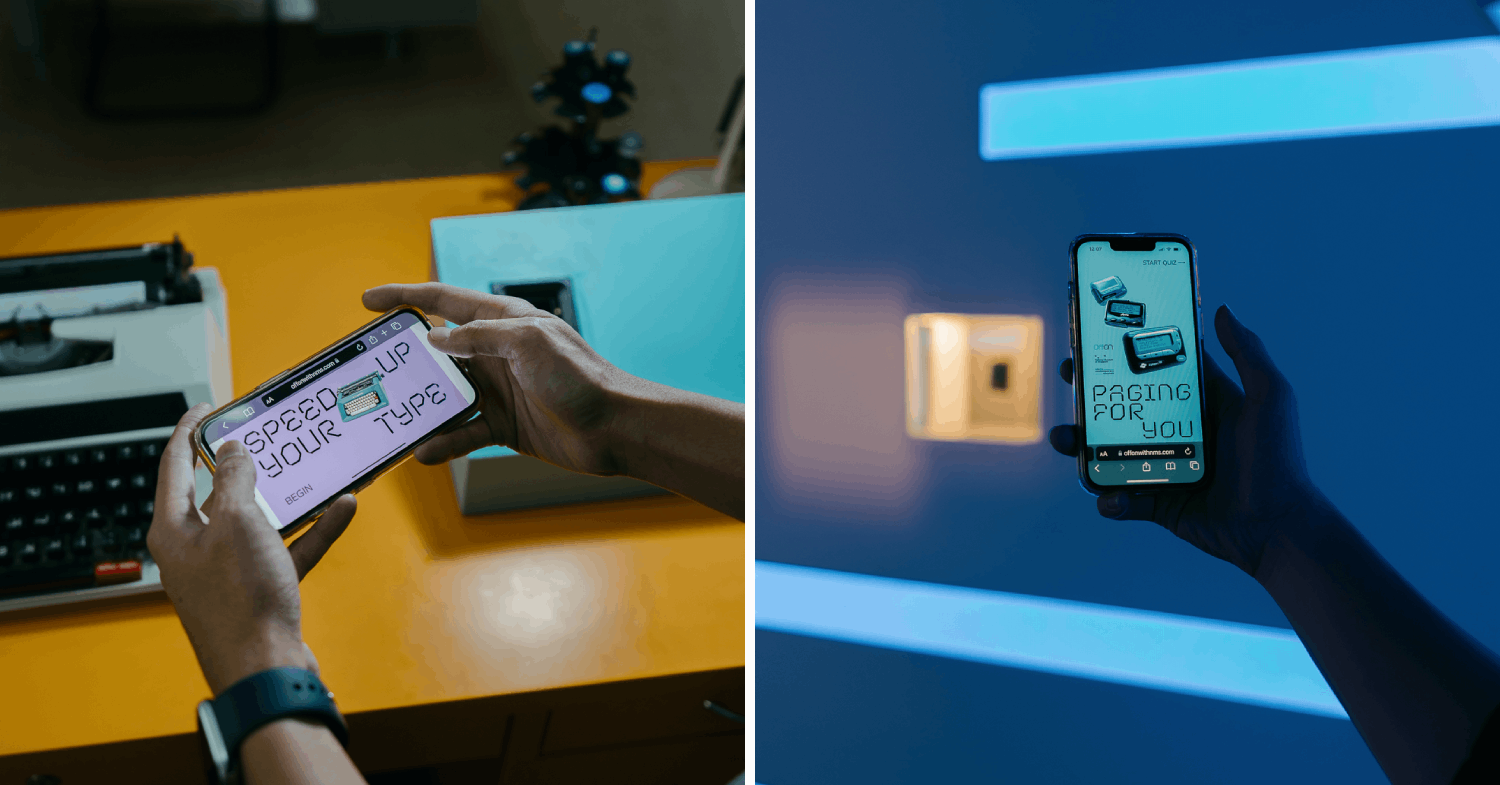 More history nuggets and games can be accessed through the exhibit’s Digital Companion on the museum’s website. You’ll get to participate in a lucky draw and win prizes – all you have to do is complete tasks such as decoding pager codes and putting your thumbs to the test in a typing game. 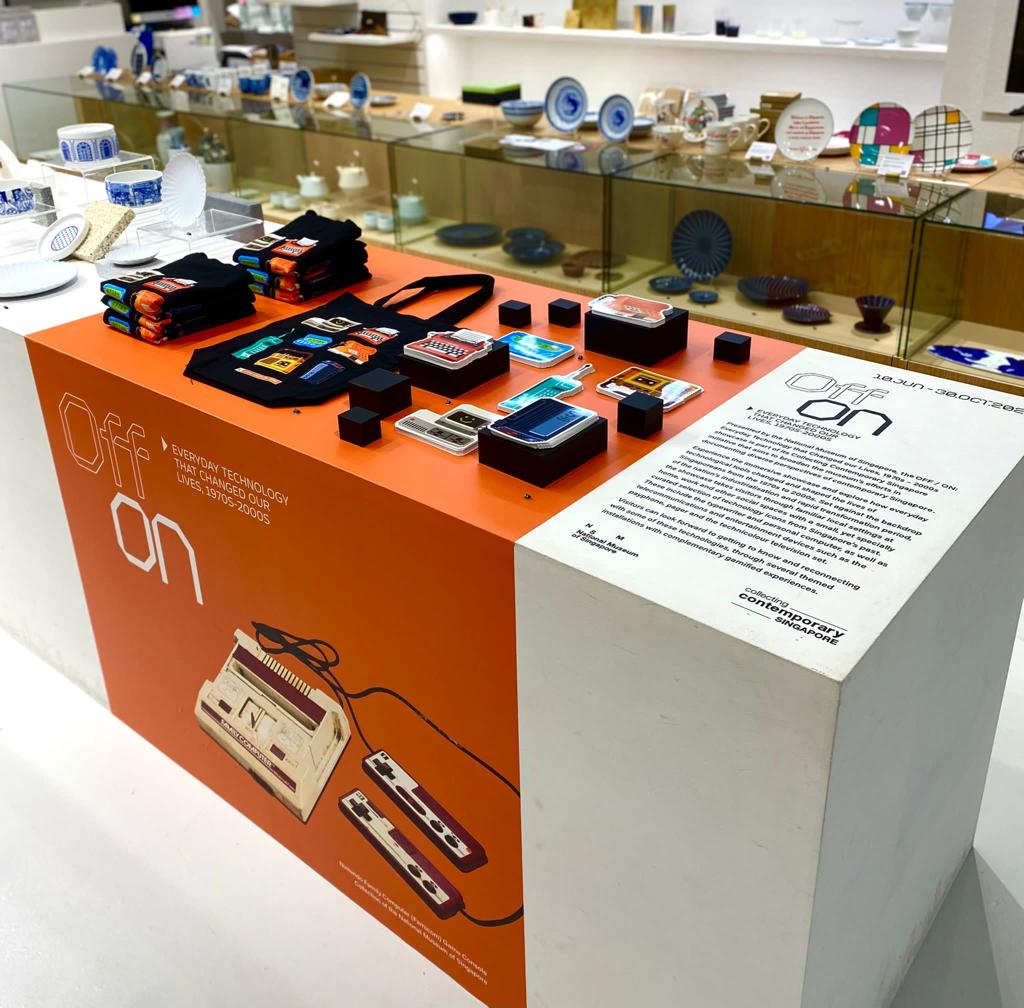 A trip to the museum isn’t complete without souvenirs. Together with Supermama The Museum Store, you’ll be able to find exclusive merch such as tote bags and postcards sporting tech icons from the exhibit. Off / On at the National Museum of Singapore is running from now till 30th October 2022, so there’s plenty of time to rally up the fam bam to reminisce the good ol’ days and appreciate the future ahead with tech.

Check out our video here:

Find out more about the Off / On exhibit here 8 Best Hidden Picnic Spots Along Hiking Trails To Plonk Yourselves At Besides ECP & Marina Barrage
Families Can Enjoy Staycays At The Westin Singapore, Where Kids Can Eat Free & Cuddle... 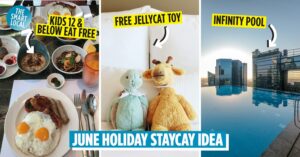