When it comes to screen time to keep the kiddos entertained, go-tos include the “Baby Shark, doo-doo-doo-doo” earworm and streaming Cocomelon episodes till you know all the characters by heart. Although they do the job of pacifying your excitable children, it’s normal for parents to want content that’s more enriching instead.

There’s a world of options when it comes to educational YouTube channels for kids, and these top picks all come highly recommended by actual parents and caregivers. Besides choices aplenty, these videos also teach a wide scope of valuable skills – from alphabets and speech as well as numbers and basic mathematics, to morals and animal identification.

Highly recommended by parents, Ms Rachel emanates a warm and friendly vibe that low-key makes us wish she were our teacher back in the day.

On top of her bubbly and upbeat hosting that keeps children engaged, toddlers can learn speech habits by copying her slow-paced, in-depth and up-close enunciation exercises. She also has gesture classes for viewers as young as babies to learn actions like clapping, nodding, and shaking one’s head to say no. 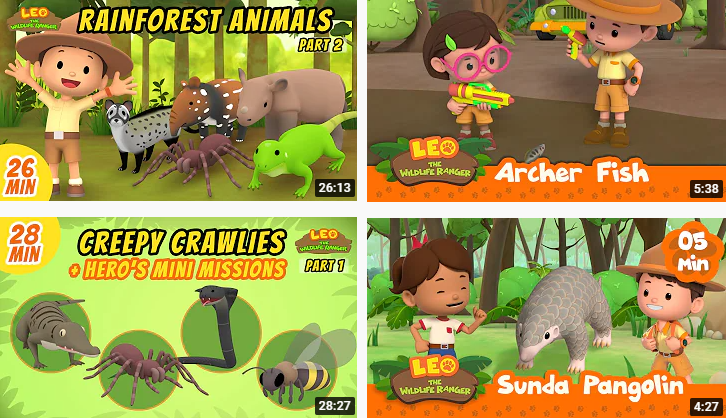 Leo the Wildlife Ranger videos are story-based, but contain many tidbits of scientific info like species identification, habitat, and endangerment status so your kid won’t be just mindlessly tuning in. Besides cartoons, they also show photos of the animals’ real-life appearances.

Young children are always taught to identify basic animals like dogs and cats first, but this series delves into lesser-known and more exotic species like the tapir, civet, pangolin and red panda. The episodes on reptiles and insects also familiarises kids with creepy crawlies and, in turn, teaches kids not to fear them. 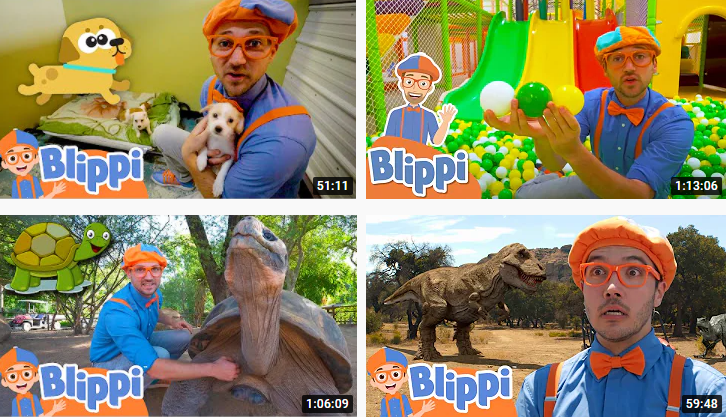 If you thought you knew popular YouTube channels as a grownup, wait till you see Blippi’s stats. Having churned out kids’ content since 2014, the legend has since amassed over 15 million subscribers, with his top-viewed video clocking an astonishing 860+ million views.

Blippi’s appeal lies in the immersive walkthroughs of his on-site adventures, instead of just hosting from a studio. The interesting locations make lessons less stale, and he can go through his teachings in relation to the setting and the objects surrounding him – which lead to better image association and memorisation. 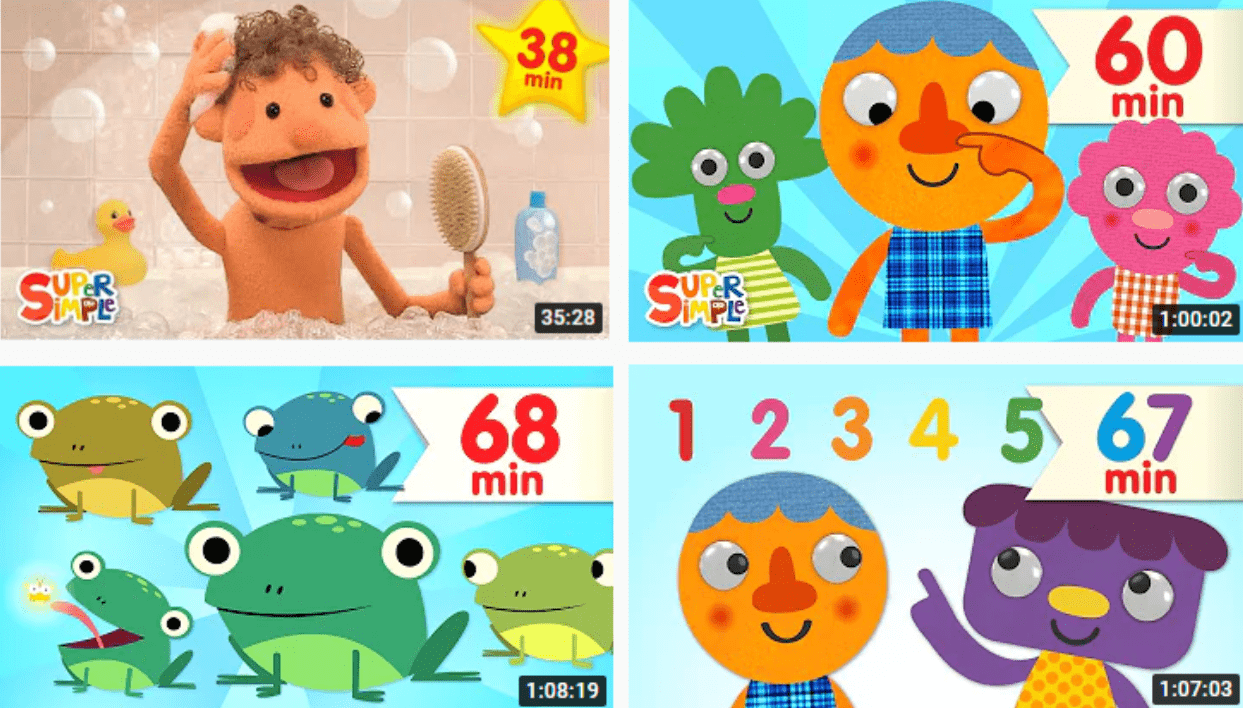 With episodes ranging from 30 minutes to well over an hour, Super Simple Songs has videos that are ideal for keeping little ones entertained over long periods of time. The catchy songs are suitable for babies to toddlers and, beyond entertainment, will teach your kids plenty of valuable info.

These include basic number, colour and animal identification, taught with the aid of various art styles to keep things fresh – from cartoons to felt puppets. For slightly older kids, there are also lessons on parts of the body as well as cultivating healthy habits and routines. For example, going potty on their own, washing their hands, and brushing their teeth. 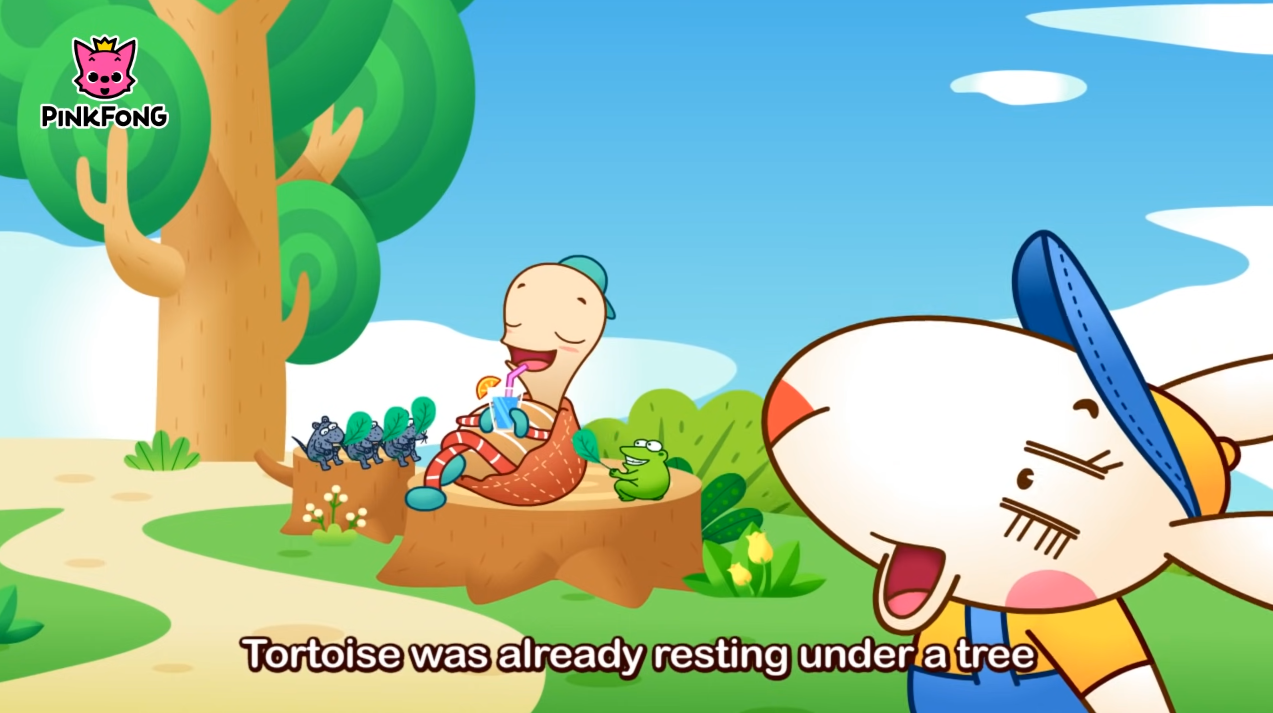 Stories include The Boy Who Cried Wolf, The Tortoise And The Hare, and The Goose That Laid Golden Eggs.
Image adapted from: YouTube

Fables are short stories that have a moral at the end of it; you probably remember your parents or grandparents telling you some classic fables when you were a kid to teach you some life lessons in a fun yet memorable way.

Pinkfong – a South Korean children’s cartoon channel which you might recognise for their astronomically viral hit, Baby Shark – has a Pinkfong Aesop’s Fables playlist of no less than 30 fable story videos. They range from 2-5 minutes in length, but you can also play their compilations which span 20 minutes. 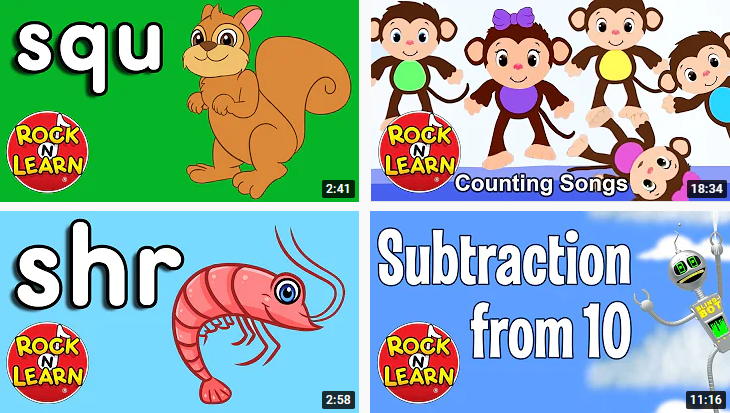 With simple, no-frills animations, Rock N Learn has video lessons suitable from toddler-level to primary school. The basic English and Maths videos include topics like numbers and the alphabet. On the other end of the spectrum, there are more complex teachings like spelling, and even addition and subtraction.

The good thing about their lessons is that they are bite-sized yet in-depth. Videos are broken down into focused episodes, with dedicated videos for specific topics like trigraphs – AKA combinations of 3 letters and how to sound them out. Alternatively, you can also play compilations based on a certain subject.

There are also songs which teach topics like plants, seasons, and months of the year.
Image adapted from: YouTube

As you’d imagine from the name, Mother Goose Club is chock full of nursery rhymes that we grew up listening to ourselves, like Twinkle Twinkle Little Star and Old Macdonald Had A Farm. The age-old ditties are brought to life by expressive hosts performing in colourful, larger-than-life costumes.

Having human hosts rather than just animations teaches kids expression reading and mirroring. This in turn allows children to better dance along to songs like Head, Shoulders, Knees And Toes – aiding in their body part identification skills. 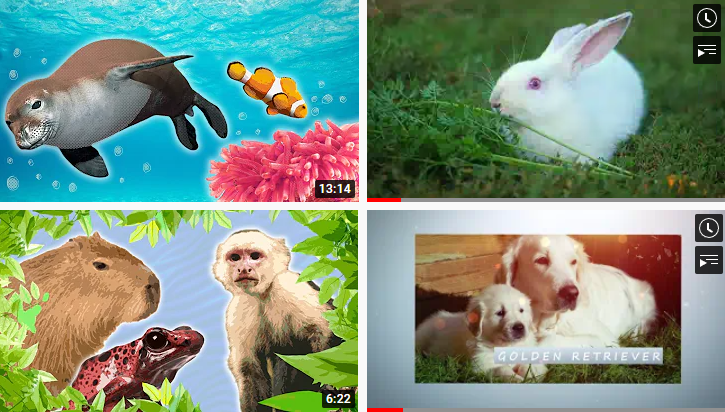 Socratica Kids is the channel for young animal lovers and budding zoologists. The documentary-style narration is more suited for older children with solid listening comprehension skills. That said, the footage alone also works to keep young kids engaged, and exposes them to the sight of actual animals and not just cartoons.

With a collection of over 30 videos so far, the channel is great for fostering a love for animals at a young age, and satiating kids’ curiosities for adorable critters. Be warned, your kid may very well pester you for a pet dog/cat/rabbit afterwards. 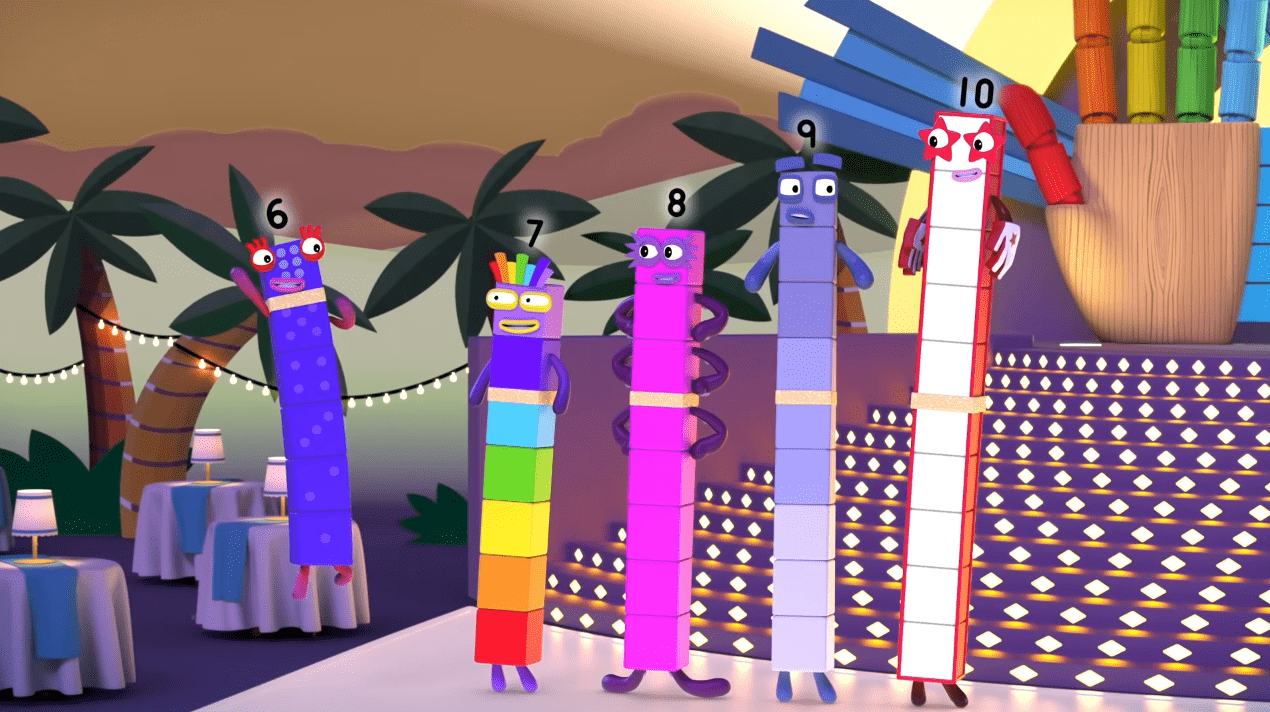 Whether you’re trying to ease your young one into picking up numbers or have faced difficulties trying to train them in basic mathematics, Numberblocks is another tried and tested parent recommendation. Their adventure-based videos teach counting and pattern recognition as part of the storyline, instead of pushing rote learning with numbers on the screen.

The characters are simple blocks in varying colours, allowing children to visualise the numbers – and their additions or subtractions – more easily. For instance, a short “3” character transforms into a long “8” structure after merging with “5”. Think of it as the video form of us playing with those number blocks back in school, hence the name of the show.

Octonauts is a popular children’s series on Netflix. Their YouTube channel has plenty of free snippets though, so you can gauge whether it’d be worth it to buy a subscription if you haven’t already. Just saying – there are 4 full Octonauts seasons on the platform, as well as other Netflix shows for kids that are educational in nature. 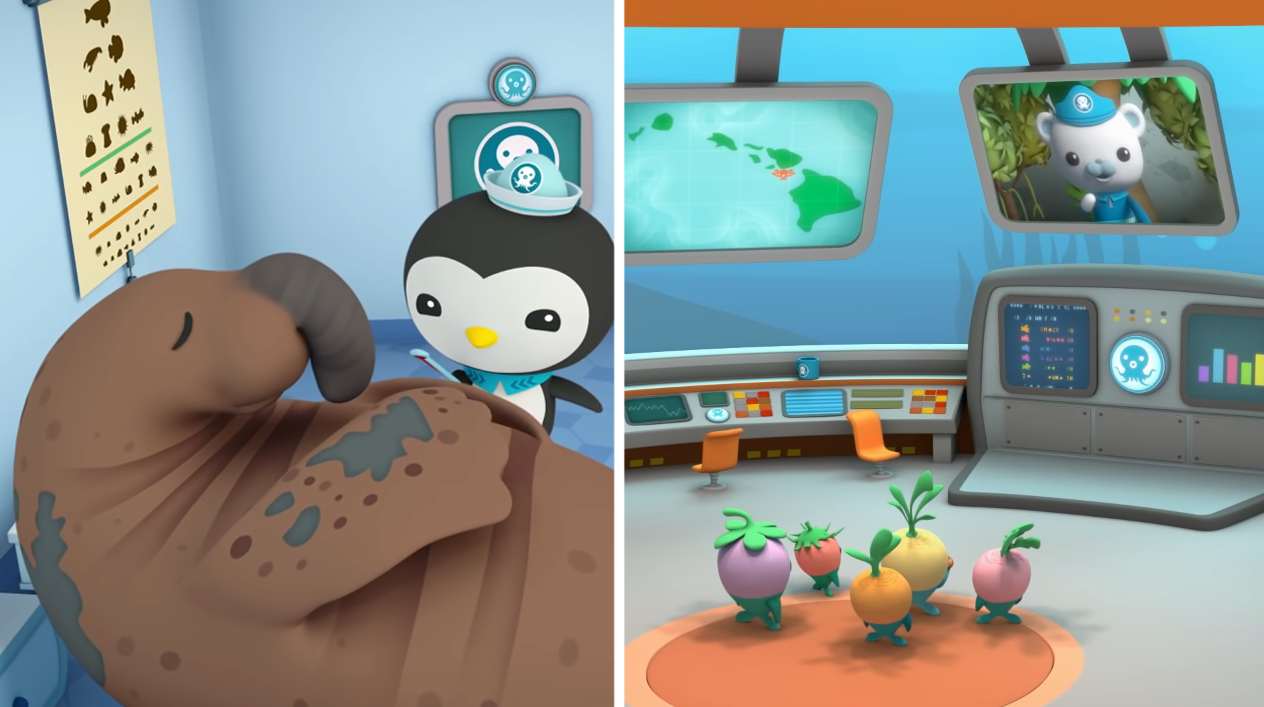 Your kid will learn about lesser-known animal breeds like the long-nosed elephant seal.
Image adapted from: YouTube

The cute cartoon features 8 distinct characters, allowing kids to familiarise themselves with their animal species such as penguin, polar bear, sea otter, and even a dumbo octopus. Yes, that’s a real thing.

Episodes are themed around science and exploration, with settings in nature and lots of additional animal characters, from eels and butterflies to the exotic elephant seal. Their storylines also teach social skills such as sharing, teamwork and collaboration.

Train their brains with these educational YouTube channels for kids

Parents who grant their kids screen time are often subjected to criticism and judgement. But if you’re someone who actually has to deal with little ones all day, every day, you know full well that moderate amounts of screen time is not only justified, but even beneficial.

These educational YouTube channels for kids go to show that there are millions of parents all around the world who have given their stamp of approval. Scroll through the comments, and you’ll find glowing reviews of how the videos were able to teach their kiddos impressive new skills and knowledge – all while mummy and daddy did their thing with peace and assurance.

So the next time you’re scouring for some Cocomelon alternatives, give these top rated and highly recommended channels a try. Your kid might very well have some cool new learnings to report.

For more enriching activities for kids: 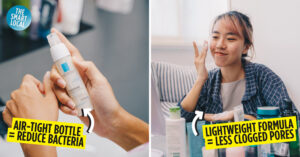 4 Things To Look Out For When Buying Skincare Products For Those With Dry & Irritated Skin
9 Affordable Mother's Day Gifts In Singapore, Least You Could Do Since You Didn't Become... 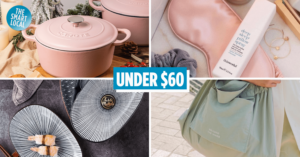