If you’re not an NSman, chances are, the closest you’ll get to firing a gun will probably be in the online realms of Call of Duty or Counter-Strike. While gunning down zombies and virtual opponents is fun and all, you can get the real deal at TactSim, the first indoor airsoft arena to grace our local shores.

Situated in HomeTeamNS Khatib, TactSim offers two player-versus-player Airsoft Arenas and a Target Shooting Range that cater to players of all levels within its 765SQM facility space. Instead of grinding for those Warzone dubs online, recruit your buddies and head on down to get a taste of the Japanese sport yourselves.

PSA: As real pellets are being shot here, you’ve got to be 18 years of age and above to be able to access the game zones.

Duke it out against your enemies at the Airsoft Arenas

Gear up for battle with four different airsoft guns Before you head on down, you’re advised to come in long sleeved tops and long pants just so you don’t expose your skin to the wrath of the 6MM plastic pellets. If you want a lil’ bit of neck protection, having a gaiter or even a shawl will shield your neck from the tiny red marks the pellets inflict.

As for footwear, covered shoes and socks are a must for the same reasons. Sandals and Crocs are a definite a no-no – there’s a risk of your sharpshooting buddy firing a bullseye into one of the tiny holes of your Crocs. Whether you’re playing in the PvP arena or the Target Shooting Range, you’ll have to listen to a mandatory safety briefing to minimise the chance of an injury that could dampen the fun – real airsoft replica firearms are being used, after all. As a boy who hasn’t served the nation yet, I found the protective vest surprisingly easy to put on – lift the velcro flap at the bottom and secure the connective velcro piece there. Don’t worry if you struggle though, their in-house staff will guide and assist you through the process. 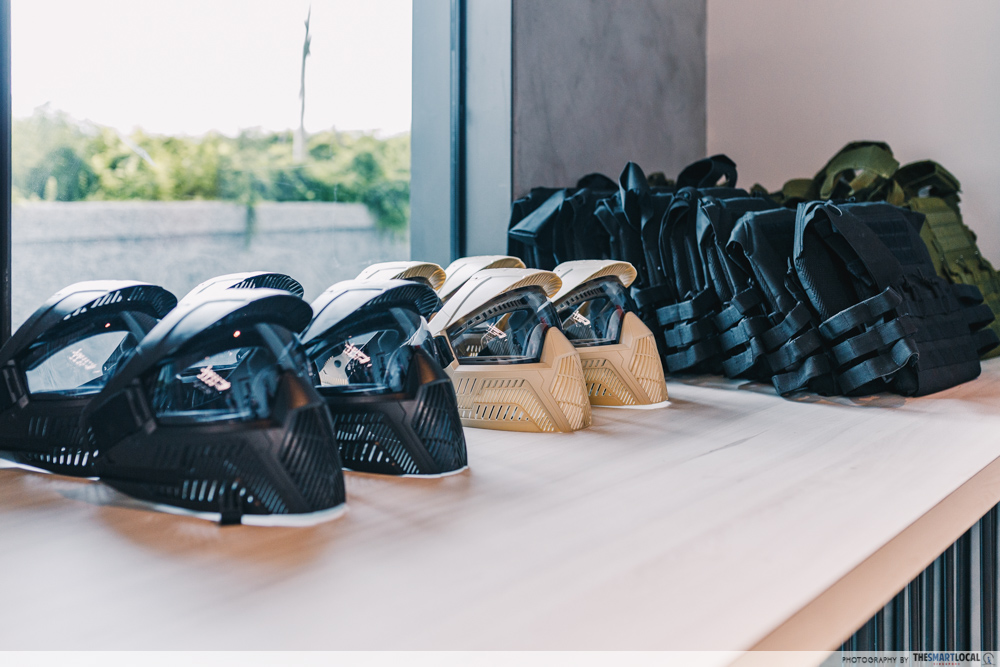 To guard your beautiful complexion from the flurry of oncoming pellets in the PvP arena, you’ll have to don their fully-covered head gear that comes with a see-through visor.

You can heave a sigh of relief – literally – because you’re allowed to remove your surgical masks when you’re in the PvP arena. That means no foggy glasses that obscure your vision when you play, so you’ve got no excuse if you missed a point-blank shot. 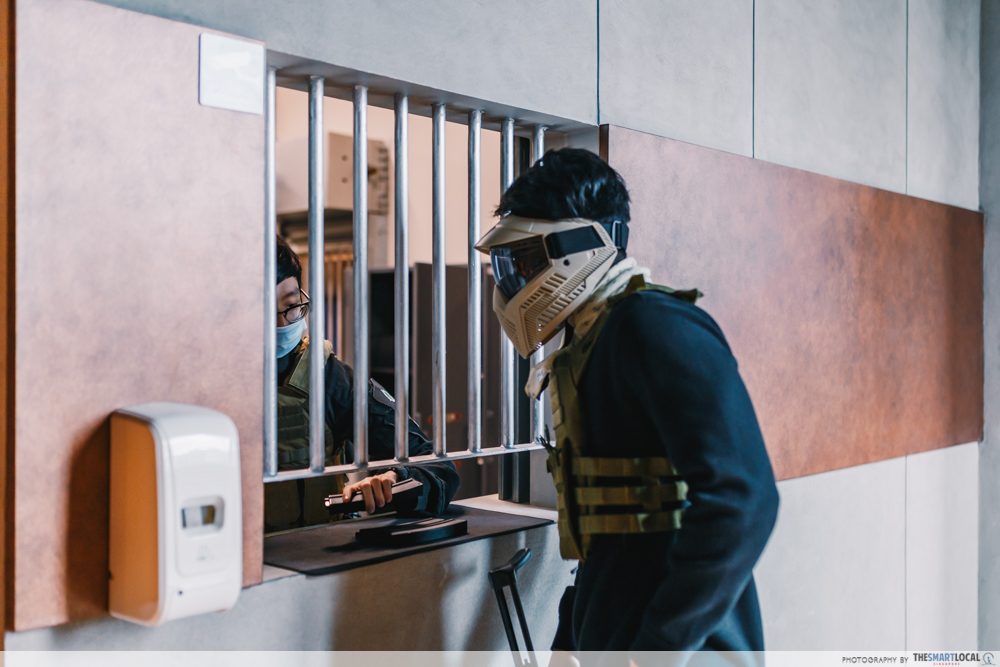 For all you FPS gamers, this one’s for you. There are a total of four different guns that you can arm yourself with – two for the PvP arena, and two for the Target Shooting Range. You can get your hands on either the MP5 submachine gun or the larger M4 SOPMOD rifle as your firearms of choice to eliminate your friends-turned-enemies in the arena.

Fun fact: To keep the damage caused from the pellets low, these airsoft replicas have their shooting velocities dialled down from around 600 to 900 feet per second (FT/S) to roughly 300FT/S.

Customise games to your liking with the moving wall panels 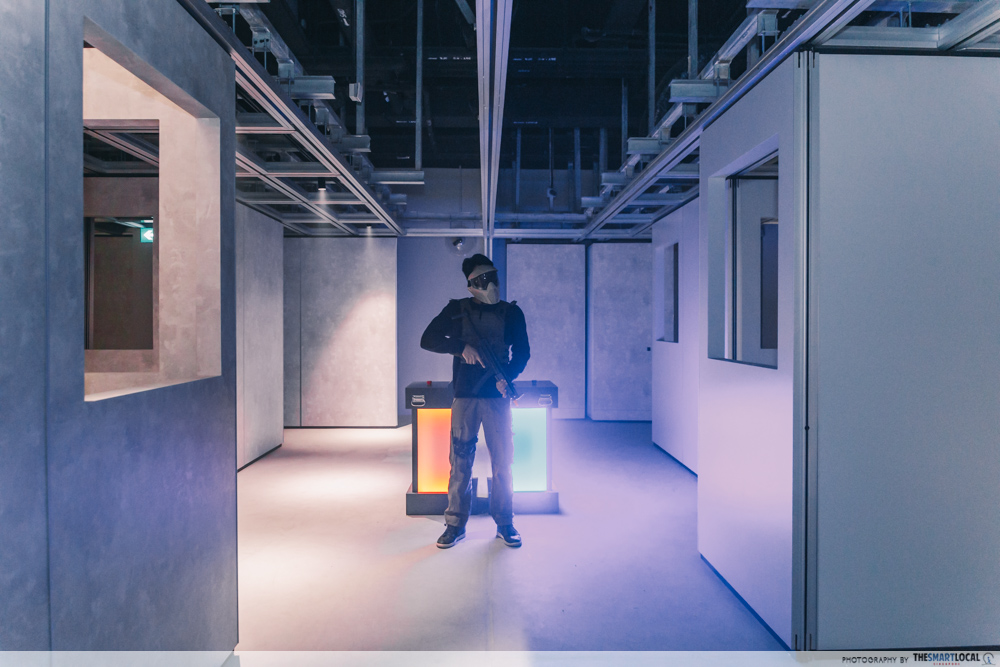 Thanks to their moving wall panels, their two different PvP Airsoft Arenas can be combined to form one large 200SQM playing area. In compliance with safe distancing measures, only two groups of five players are allowed to enter the whole facility at any one time, which still makes for an ideal 5v5 duel.

When the COVID-19 fiasco’s become a thing of the past, you can make use of the facility’s maximum capacity of 27 players to accommodate larger team-bonding activities. More players means more mayhem, and one of the in-house staff says a full-fledged 12v12 teamfight would be the most entertaining scenario. 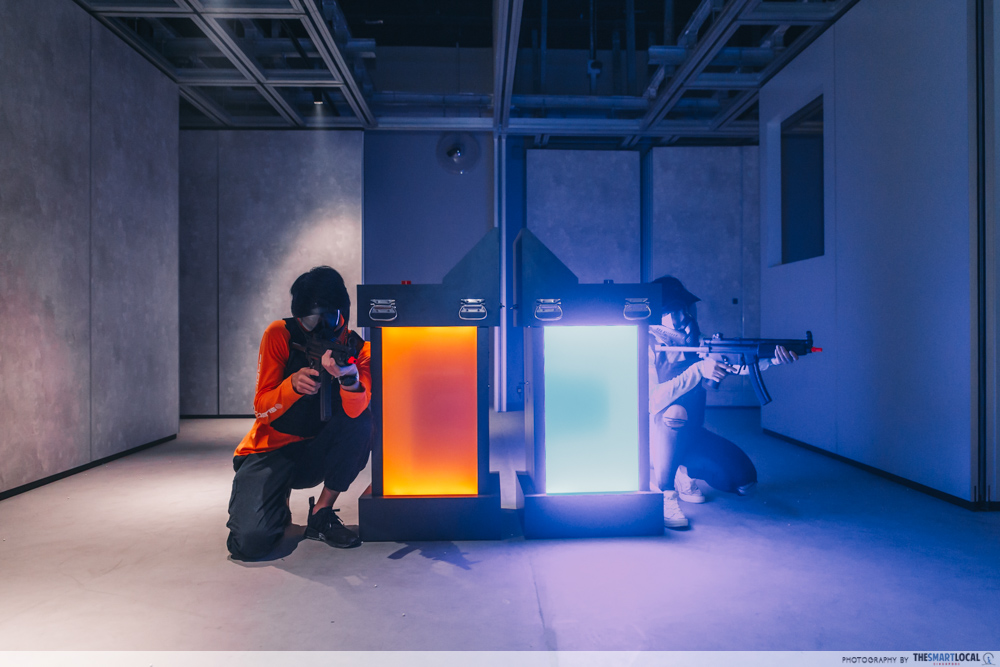 In Strike Team, you’re practically a sitting duck in the middle because you’ve got no cover, so head back to your respawn point if you’re tagged.

As for Strike Team, which we got the pleasure of trying, rush to the buttons in the middle and frantically mash your team’s button to rack up as many points as you can. Each press earns your team a point and unfortunately, my team lost with a score of 999 to 6 – a close game indeed. The beauty about the moving wall panels is that the battlefield can be moulded into pretty much any urban arena you’d like, so the game marshal can deviate from the three template games and customise a whole new unique one for you.

From elimination-based to point-based games, it’s up to you and the marshal to discuss what kind of game and intensity you’d want to play in to make the most of your airsoft experience. 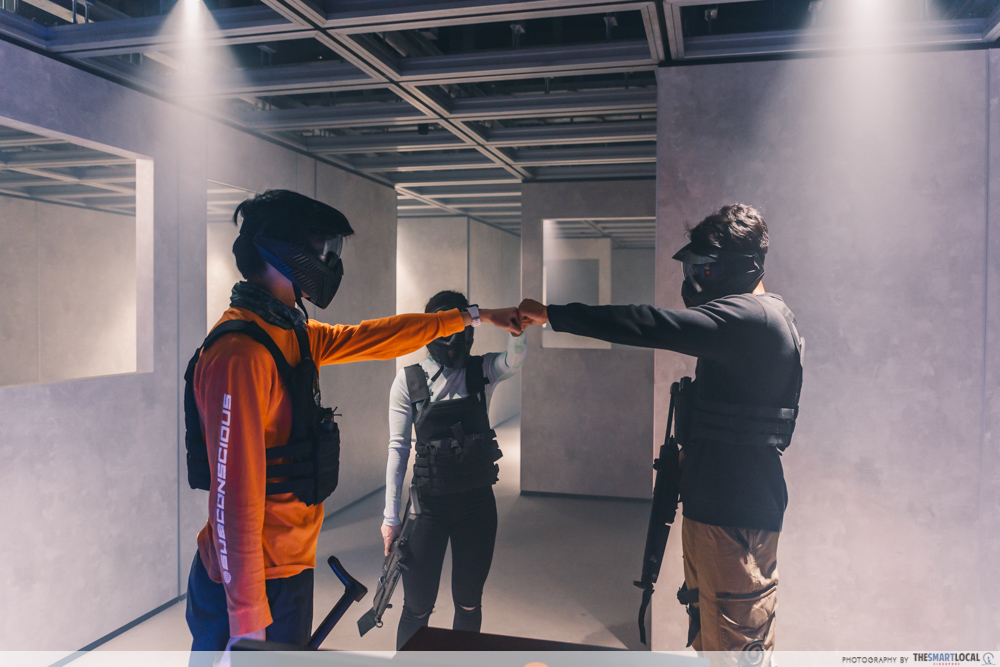 At this point in time, all game modes have been tweaked slightly to prevent any intermingling between different groups.

No matter which mode you’re playing, integrity is of utmost importance when it comes to airsoft. Unlike paintball, there’s no visible trace to indicate that you’ve been shot, so you’ve got to ‘call your hits’ whenever you feel the sting of a pellet grazing your body.

Also, you know when Thanos said Thor “should’ve gone for the head”? Yeah, don’t do that in airsoft. A shot to the body still counts as an elimination, so there’s zero incentive to aim at your opponent’s head – you’re not trying to blow your friend’s head off, soldier.

If you’re keen on an intense competitive match in the Airsoft Arena, HomeTeamNS members will enjoy a discounted rate of $120/hour, while SAFRA and PAssion members fork out $170/hour instead. Don’t worry, a minimum of 5 members are required per booking, so the hefty sum is a lot less intimidating when you’re splitting the cost.

Test your marksmanship at the Target Shooting Range If you’re looking for a more laid-back shooting experience, then you and your friends will have a field day firing a salvo of shots at the Target Shooting Range to showcase your marksmanship. NSmen get to relive their live firing days here with the propped-up target sheets and both stationary and moving targets. 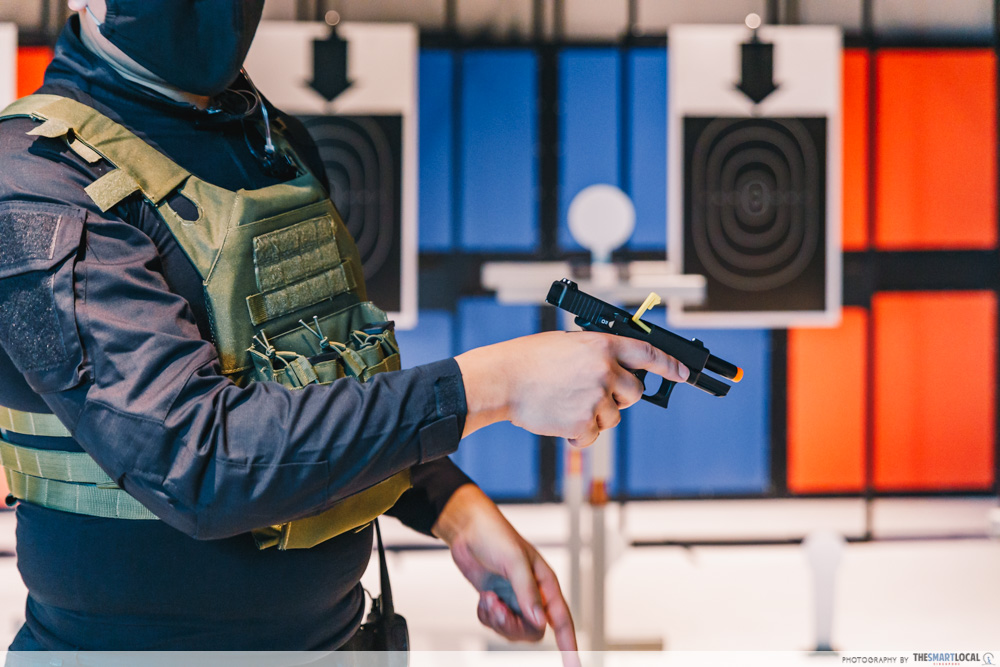 You’ll be handed the plastic Glock 19 as your trusty pistol to fire with at the Target Shooting Range. You can also opt for the metal-based CZ Shadow if you want a gun with a different iron sight and more heft.

A marshal will be there to explain how to reload the weapon and issue commands when it’s safe to shoot, so make sure to listen to the marshal’s instructions at all times. Each magazine has roughly 20 pellets, so control the recoil and unload your shots wisely.

One of TactSim’s aims is to foster teamwork, so work together to gun down as many targets as you can using one magazine each. Based on your time and the number of targets you shoot down before you run out of ammo, your score will be calculated to gauge how well you guys did.

Access to the Target Shooting Range starts at $30/hour for HomeTeamNS members and $45/hour for SAFRA and PAssion members.

Get your Call of Duty fix IRL at TactSim We’ve spent more time than we’d like to admit on our devices this year, so seizing the chance to handle some airsoft weapons IRL at TactSim is a welcome change from our virtual AK-47s.

Currently, TactSim is only open to HomeTeamNS members and Home Team-related agencies, along with SAFRA and PAssion members, due to the reduced capacity. You’ll be able to make your bookings via the GetKaki app (getkaki for iOS, GetKaki for Android) that hosts the HomeTeamNS mobile app.

Once you’ve downloaded the app, make sure to search for the HomeTeamNS Mobile App and add it to your Home page for easy access. From there, click on the Bookings tab and you’ll be able to make your reservations. If you’ve made a booking prior to your airsoft sesh, you’ll have access to free lockers to stash your belongings safely while you play.

They’re intending to open their doors to the public when restrictions ease, so keep a lookout for updates on TactSim’s Facebook page and website. Alternatively, you can drop them an email at tactsim@hometeamns.sg if you’ve got any other queries.

Book a session at TactSim Singapore.

Keep your trigger-happy tendencies in check at these other locations: 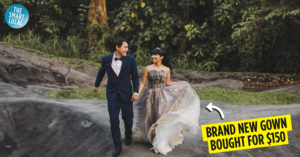 10 Ways To Get A Cheaper Wedding Dress In Singapore For Your Big Day, ROM, Or Couple Shoot
10 Mask Tips And Hacks To Make Wearing It All Day More Comfortable