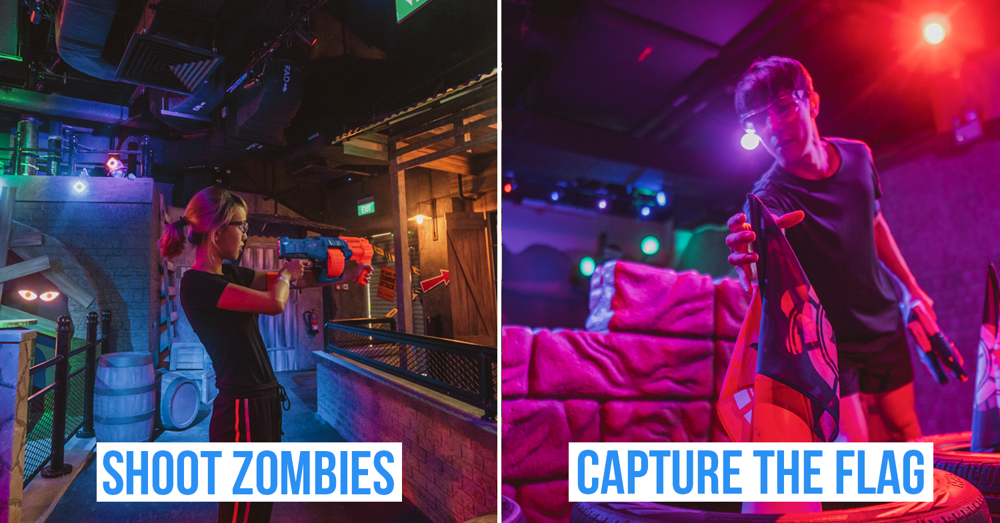 NERF guns – I’ve always heard about them, had friends rave about them, but I’ve never tried playing one myself. Have I been living under a rock? Probably. But there’s now a chance for everyone to have an actual NERF gun battle experience, complete with zombies, Capture the Flag, and timed challenges!

Nerf Action Xperience recently opened in Marina Square and invited us for a first look of their indoor activity arena that’s more than 18,000 square feet large. The adrenaline-inducing play zone for adults and kids alike left us screaming, bolting around like 3-year-olds, and taking vengeful shots at one another.

Read our other articles on indoor playgrounds in Singapore:

Shoot zombies in an abandoned city

An actual zombie apocalypse is definitely not desirable. But a pseudo one that allows you to live the excitement without having your brains eaten out? Why not. 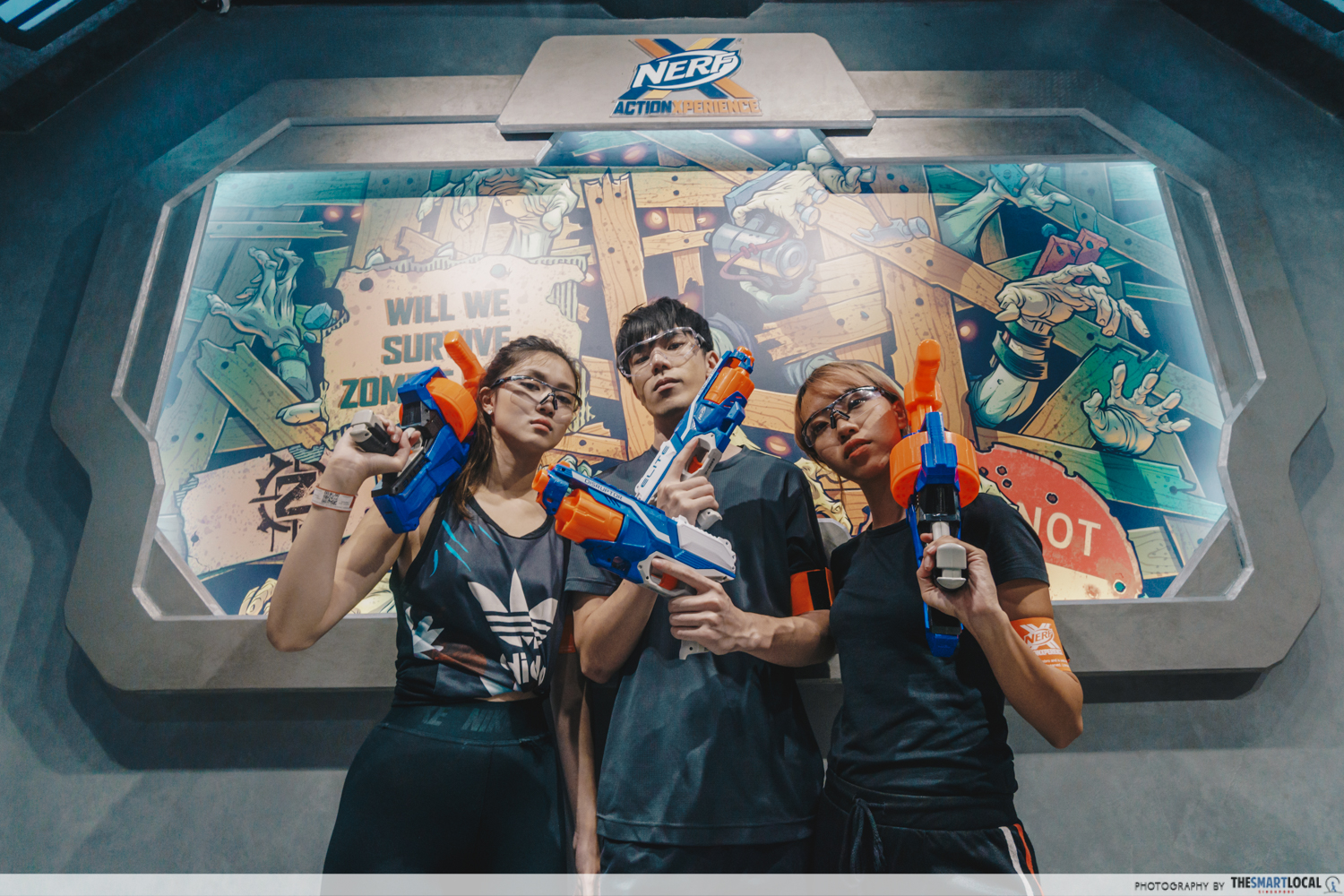 Round up your besties to form a zombie extermination crew for the day, and head to the Zombie City. Upon entering, players will be split into 2 teams – blue and orange – and each will have to shoot zombie targets and accumulate as many points as possible. 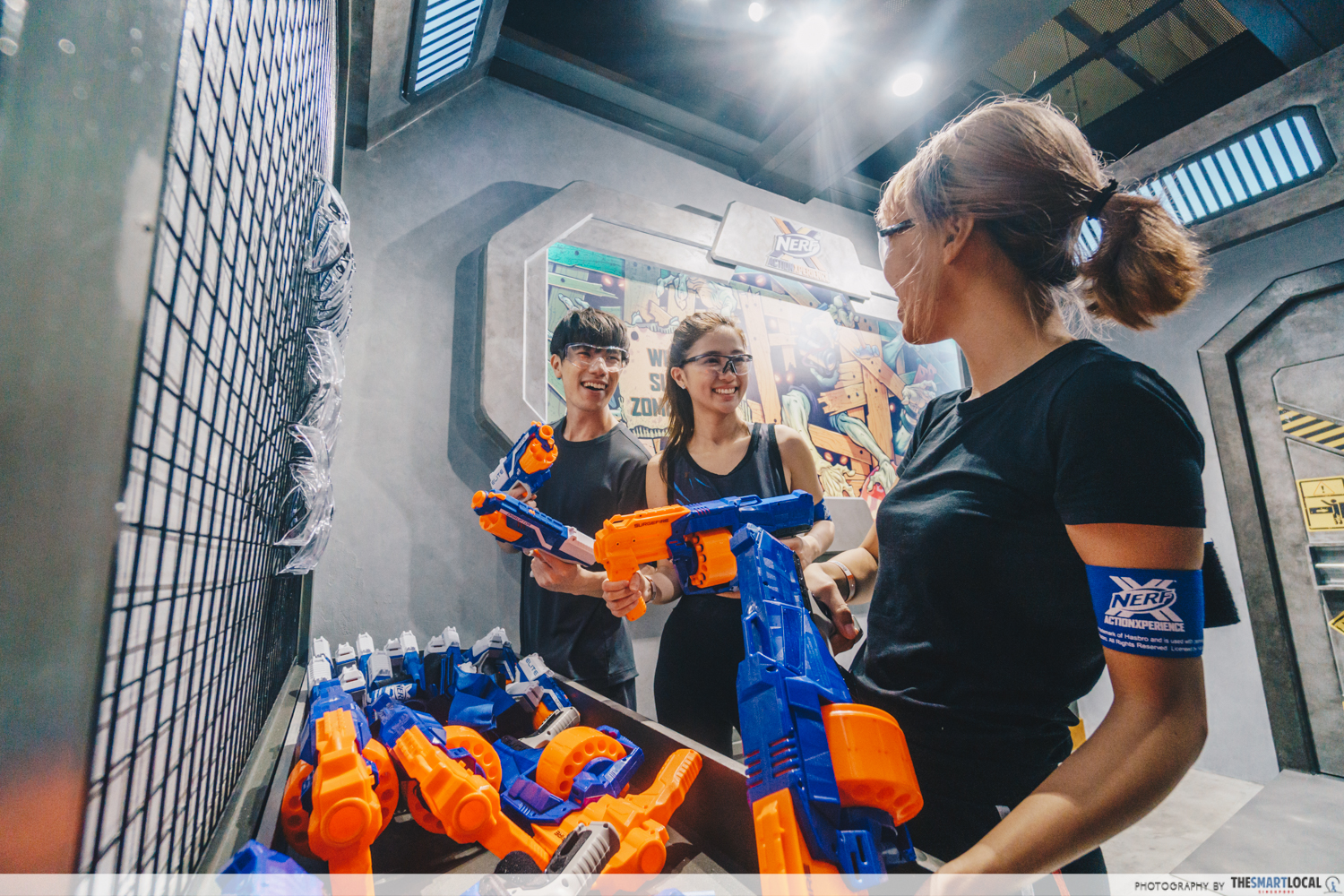 We were first brought into the weapons room to grab goggles for eye protection, team coloured bands, and of course, NERF guns. 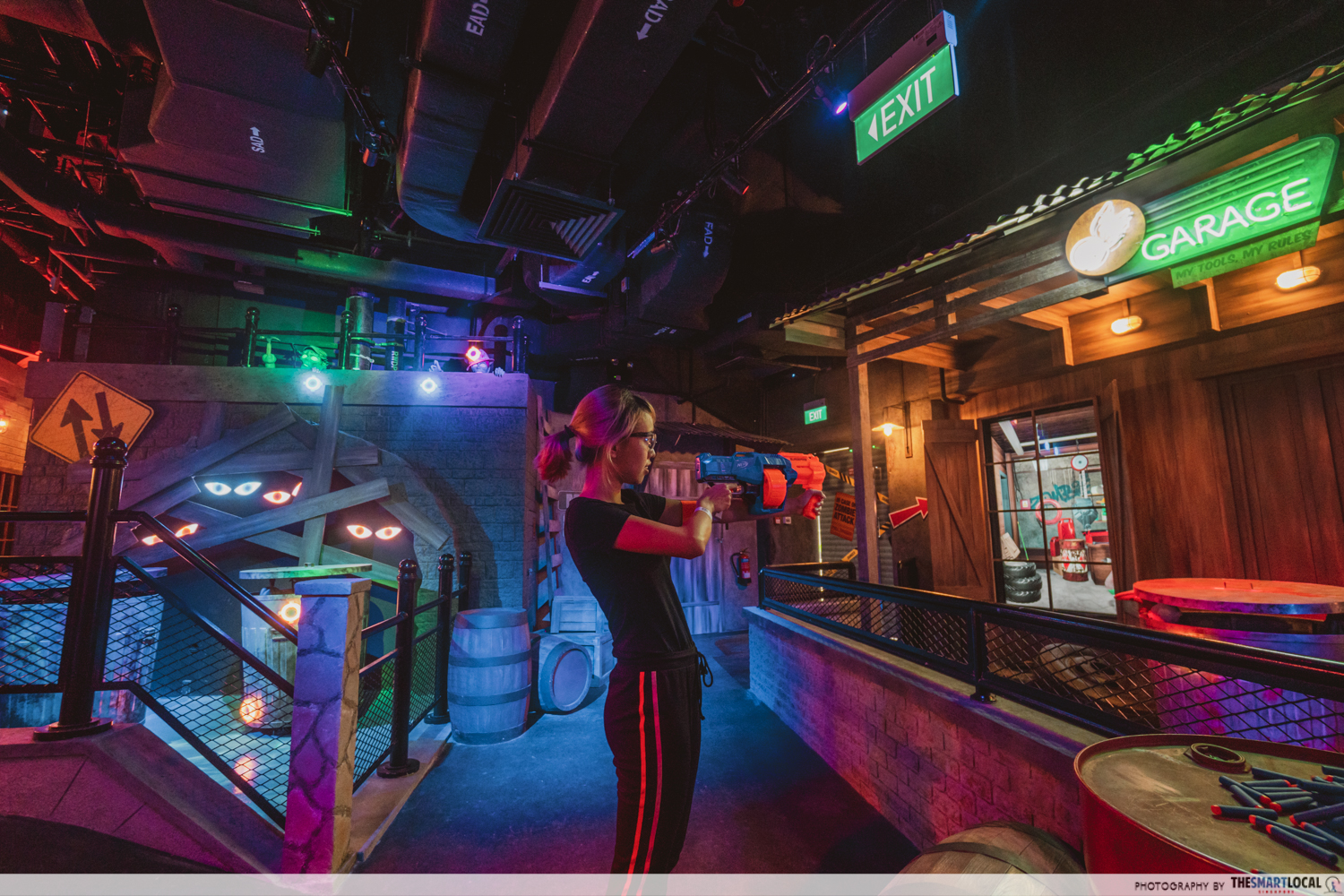 Entering the zombie-infested city, we almost believed we were in a set of World War Z, with those terrifying creatures hiding in barrels, behind doors and roaming behind “windows” that are actually screens. 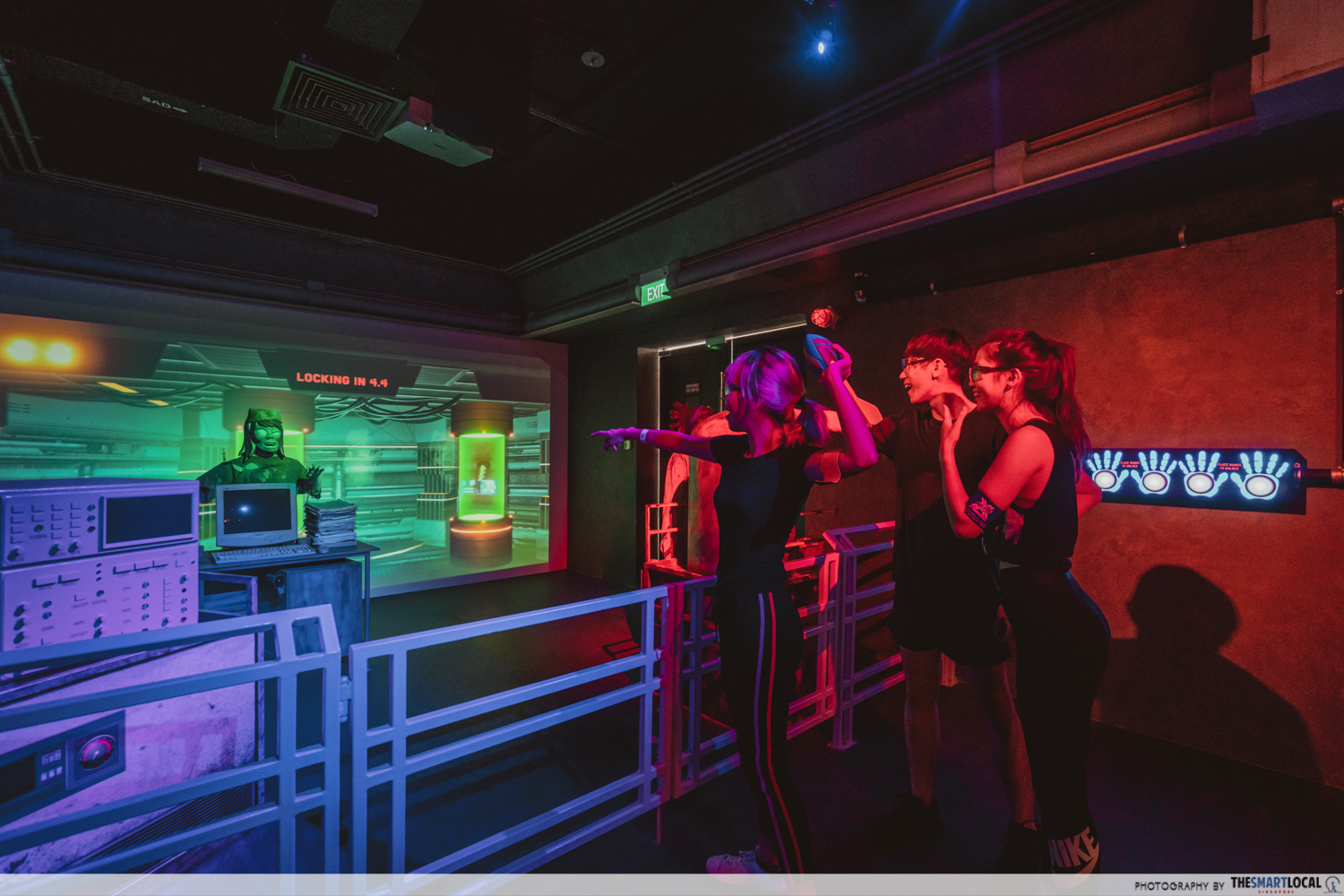 Win the game by finding the hidden missiles and unlocking the vaccine to save all of humanity. If Gerry Lane were real, he’d be proud.

Battle it out with a game of capture the flag, with NERF guns

NERF Guns are for firing at many things, but predominantly, your friends. To shoot at each other to your heart’s content, head to Camp Dune, modelled after the classic Capture the Flag game. 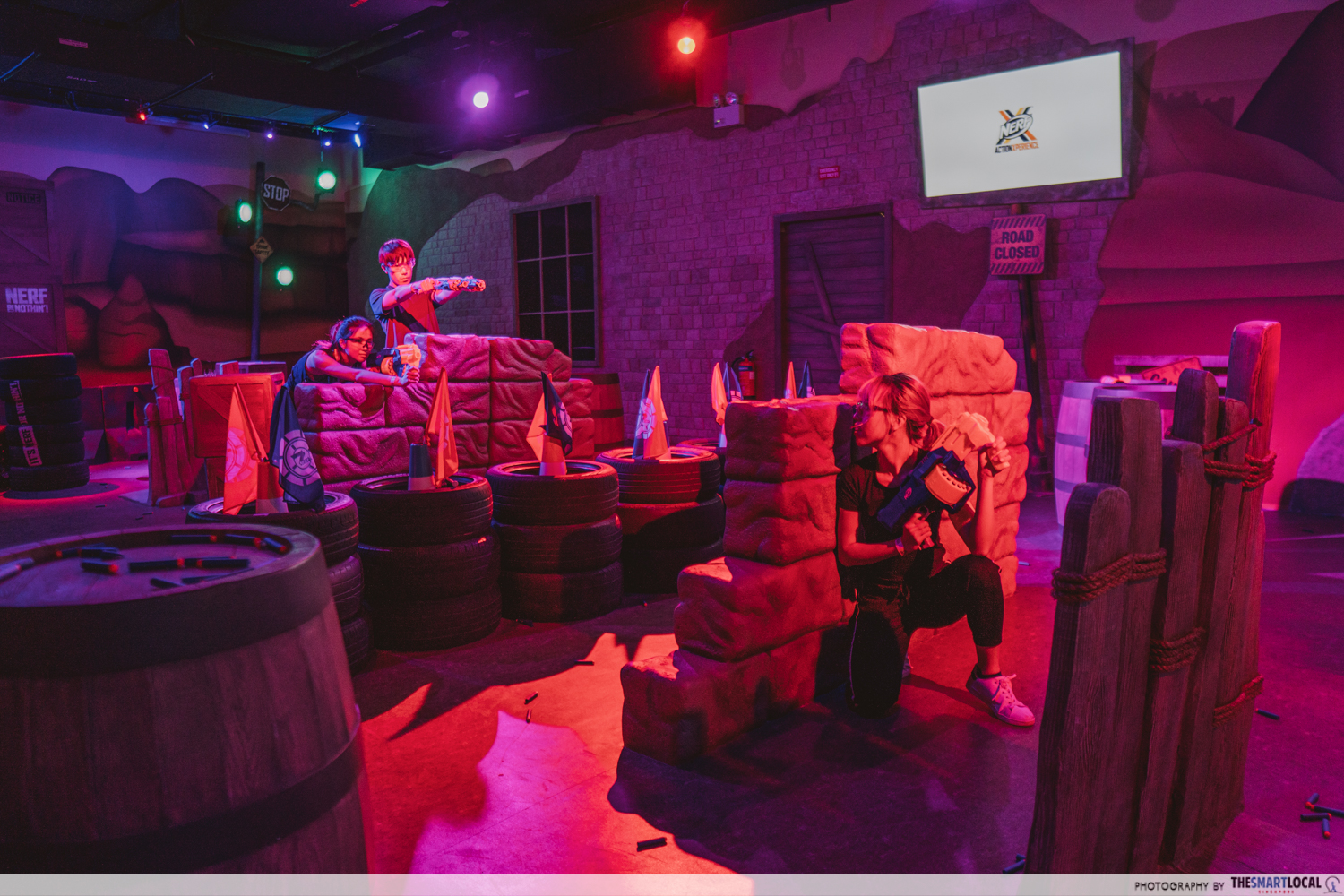 Unlike your usual Capture the Flag competitions, this one plonks you in the middle of a battle area, NERF gun in hand, much like the Hunger Games, except no one gets hurt. The foam darts cause more of a shock than actual physical pain, thankfully. 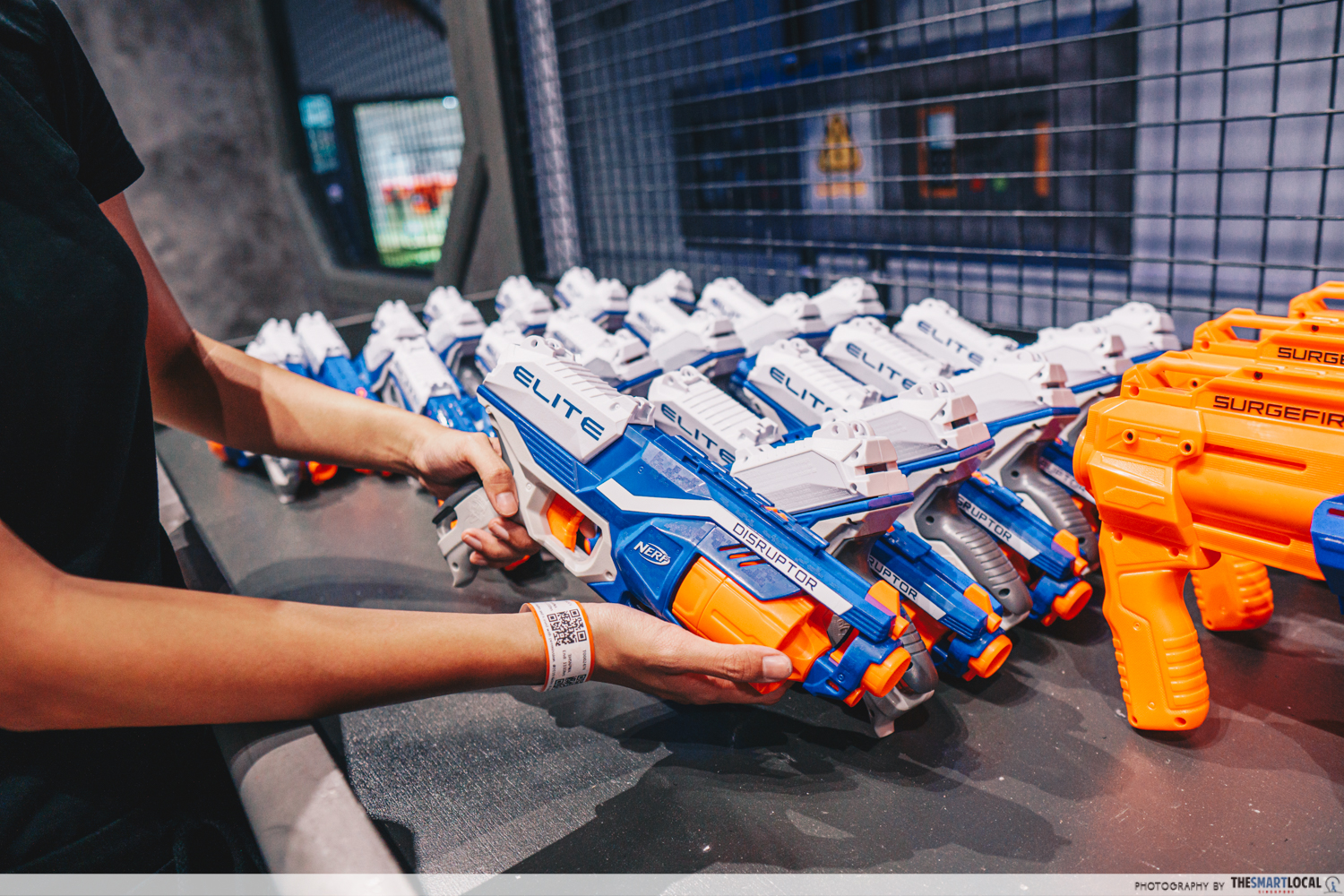 Players are once again split into 2 teams and brought into a weapons room where you can pick between the Disruptor, which has an easy aim, or Surgefire, which holds plenty of foam darts for you to send rapid fire to your opponent. 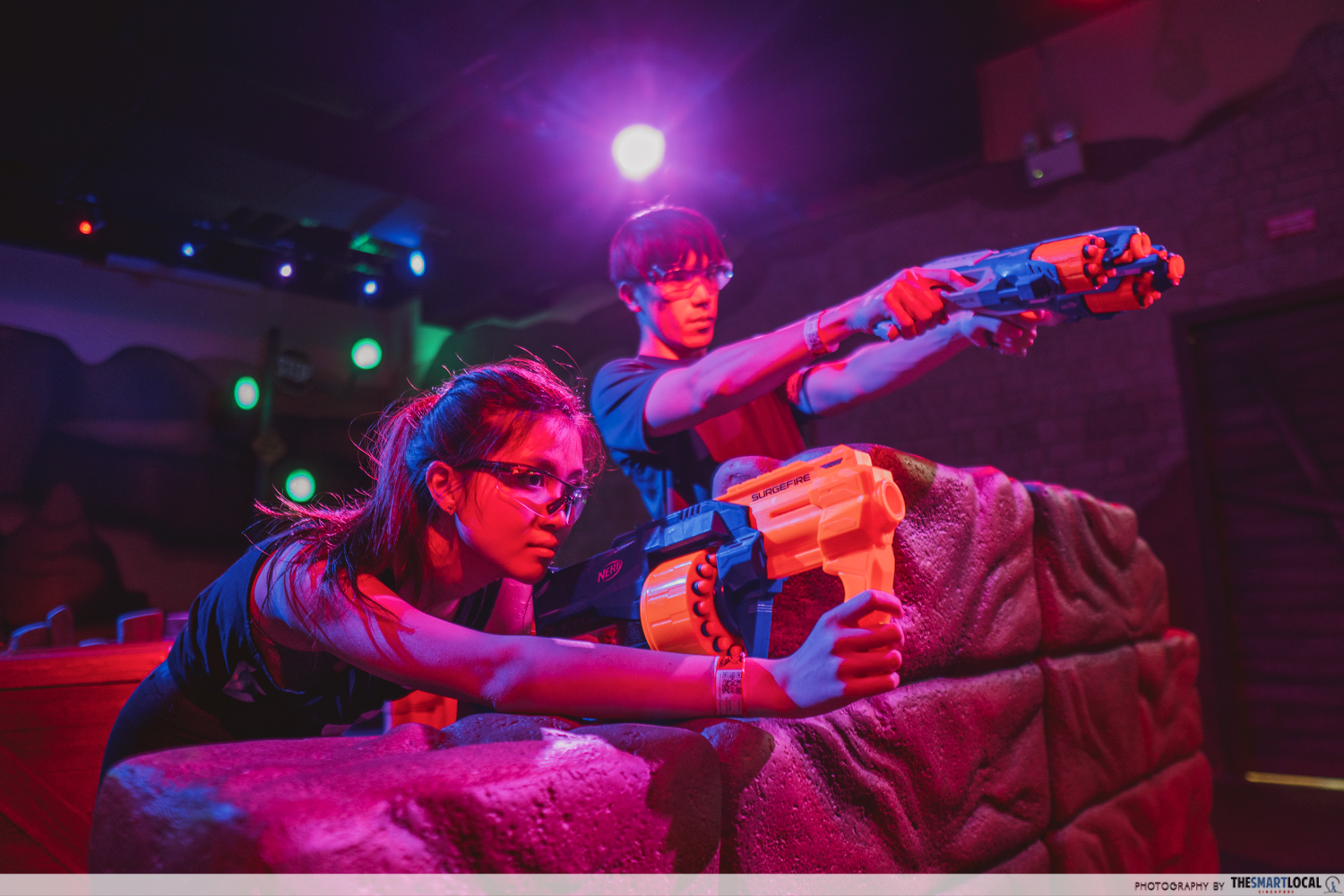 The moment the game began, havoc ensured. Foam darts were flying, people were screaming, and I was panting a good 30 seconds in. But we didn’t stop, not even when the cameraman yelled “CUT!” 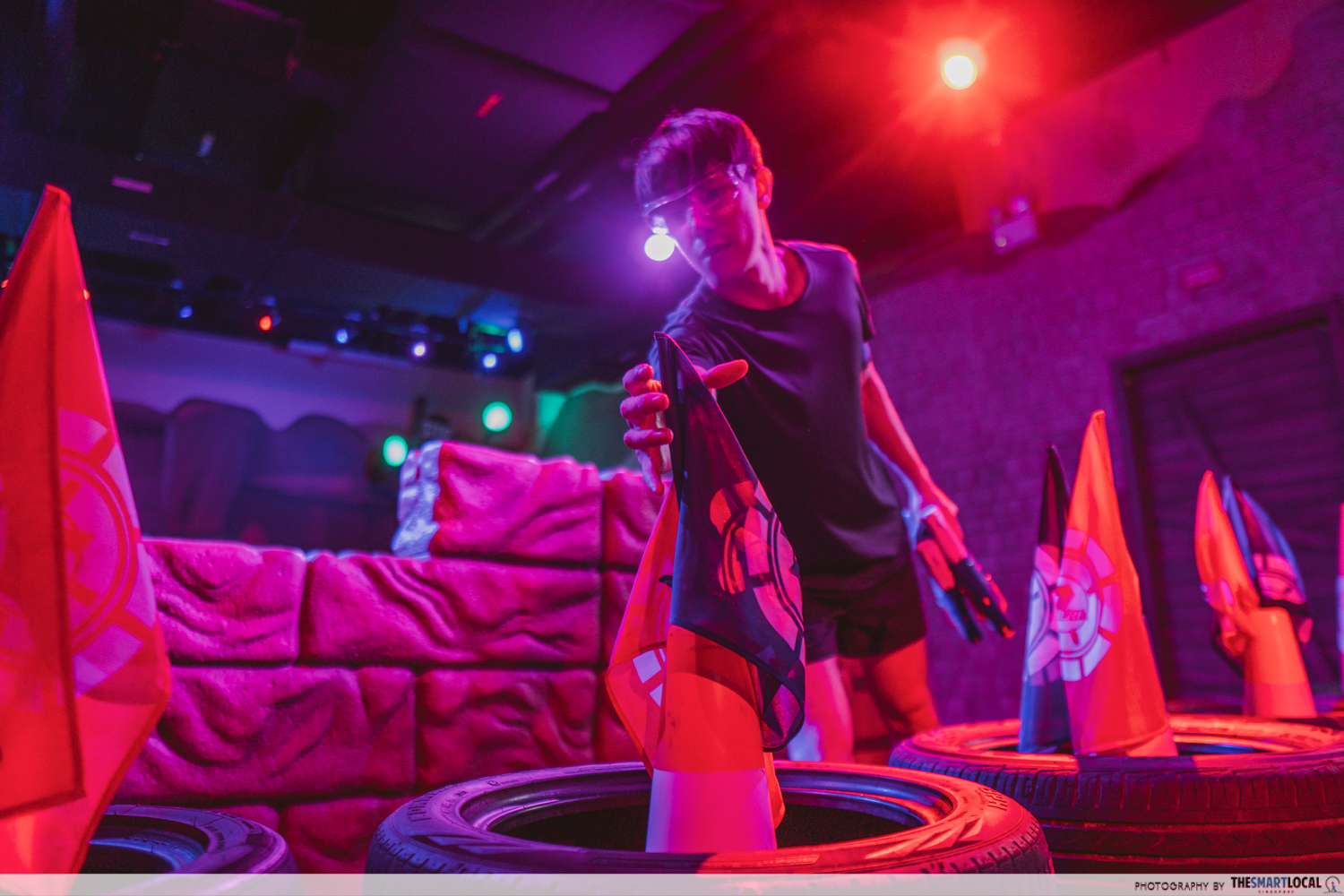 Grab your team’s flag and bring it back to base to score a point.

This was perhaps our favourite station, for the simple reason that you can shoot at one another with all courtesy gone with the wind the moment the game begins. If you’re heading over, try to bring along a gang of 6 or 12 for the best experience as this is a 6 vs 6 competition! 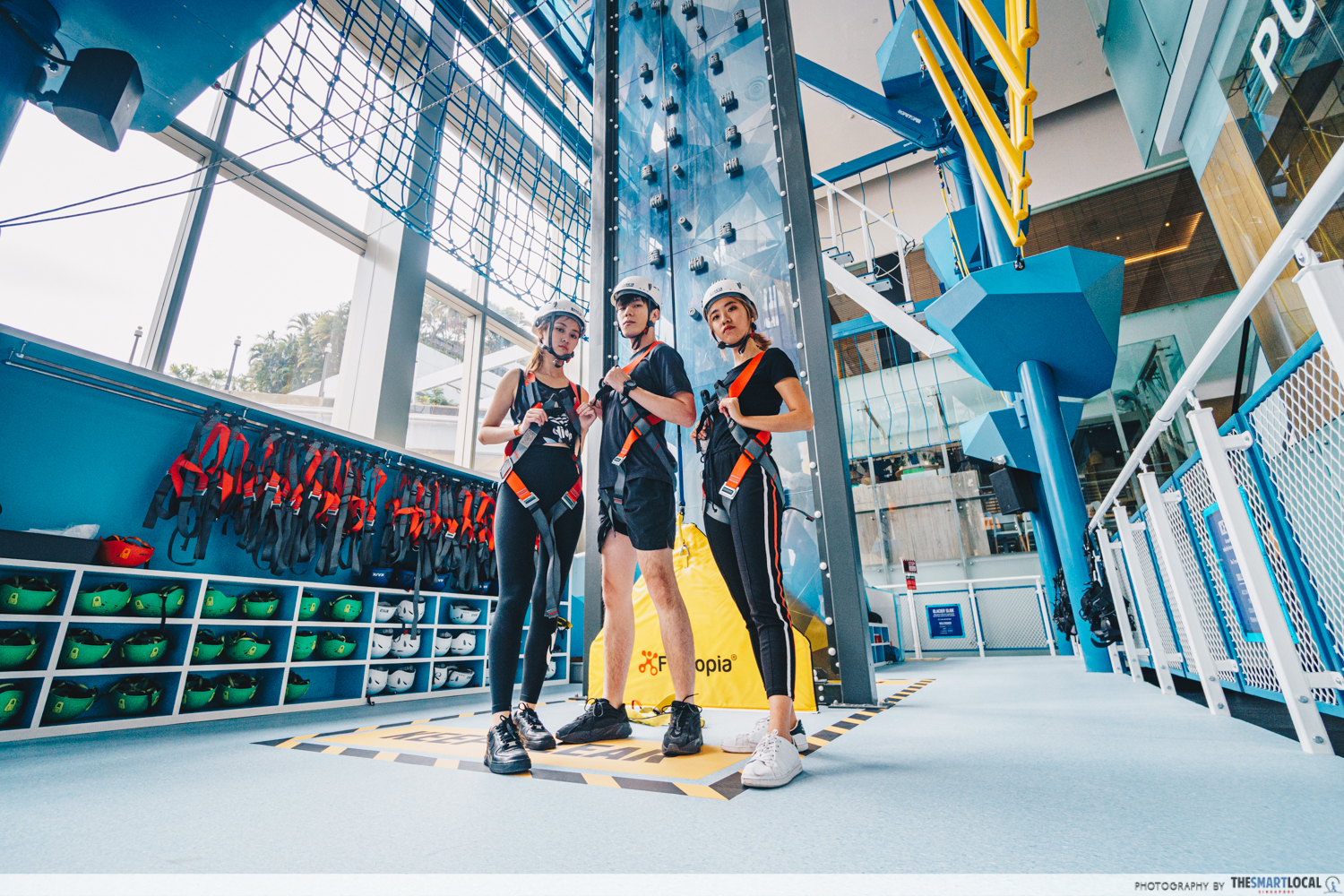 It’s time to get high – in a safe way of course. The Summit is a 3-storey high beginner rope course, with obstacles of varying difficulties dotted throughout the route. 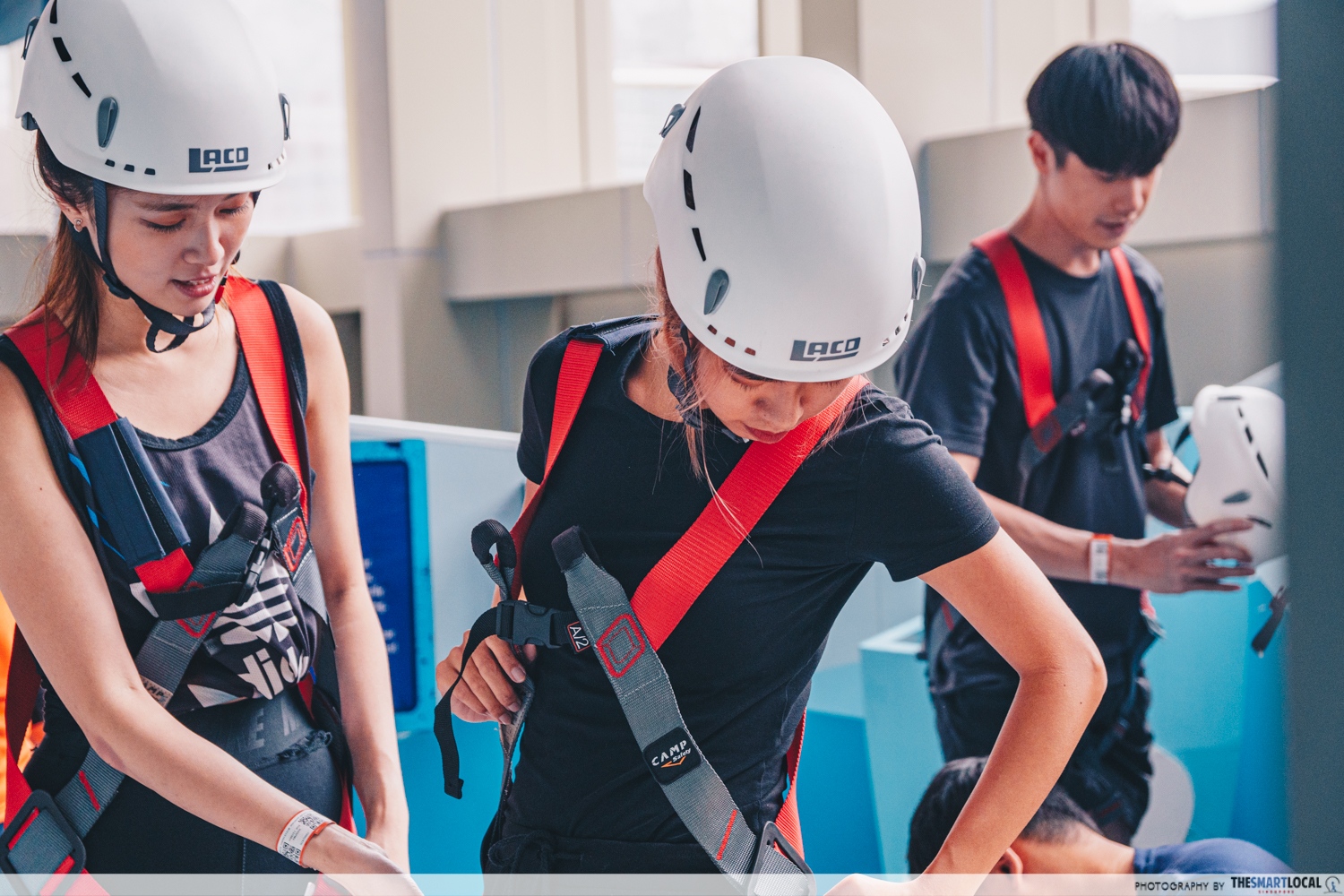 Getting into our gear

The course operates on a continuous belaying system where you’ll be hooked up to a safety line throughout the course of the obstacle – meaning you’d get to do things OTOT without having an instructor following you around. 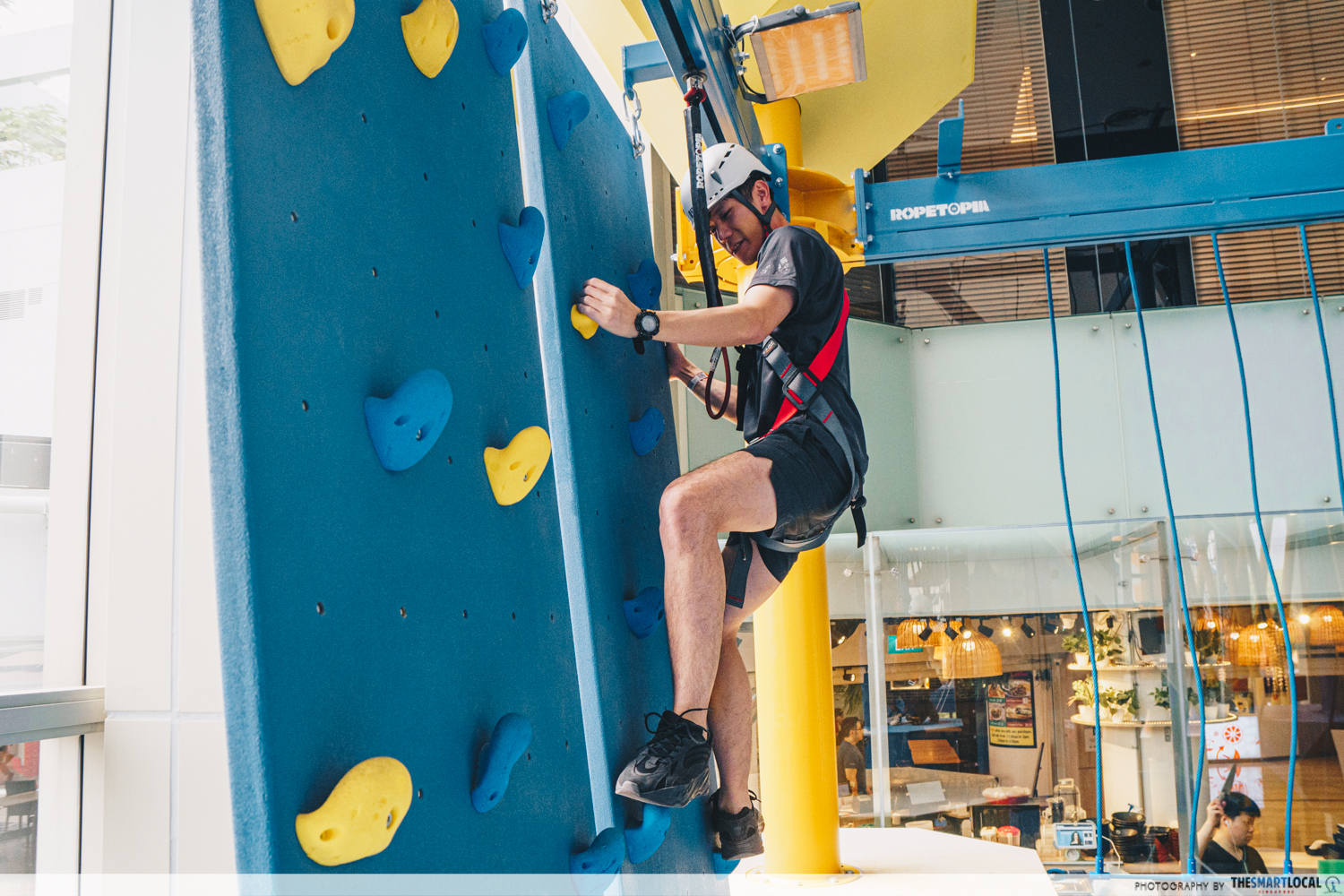 Rock climbing tiles high up – make sure to hold on tight! 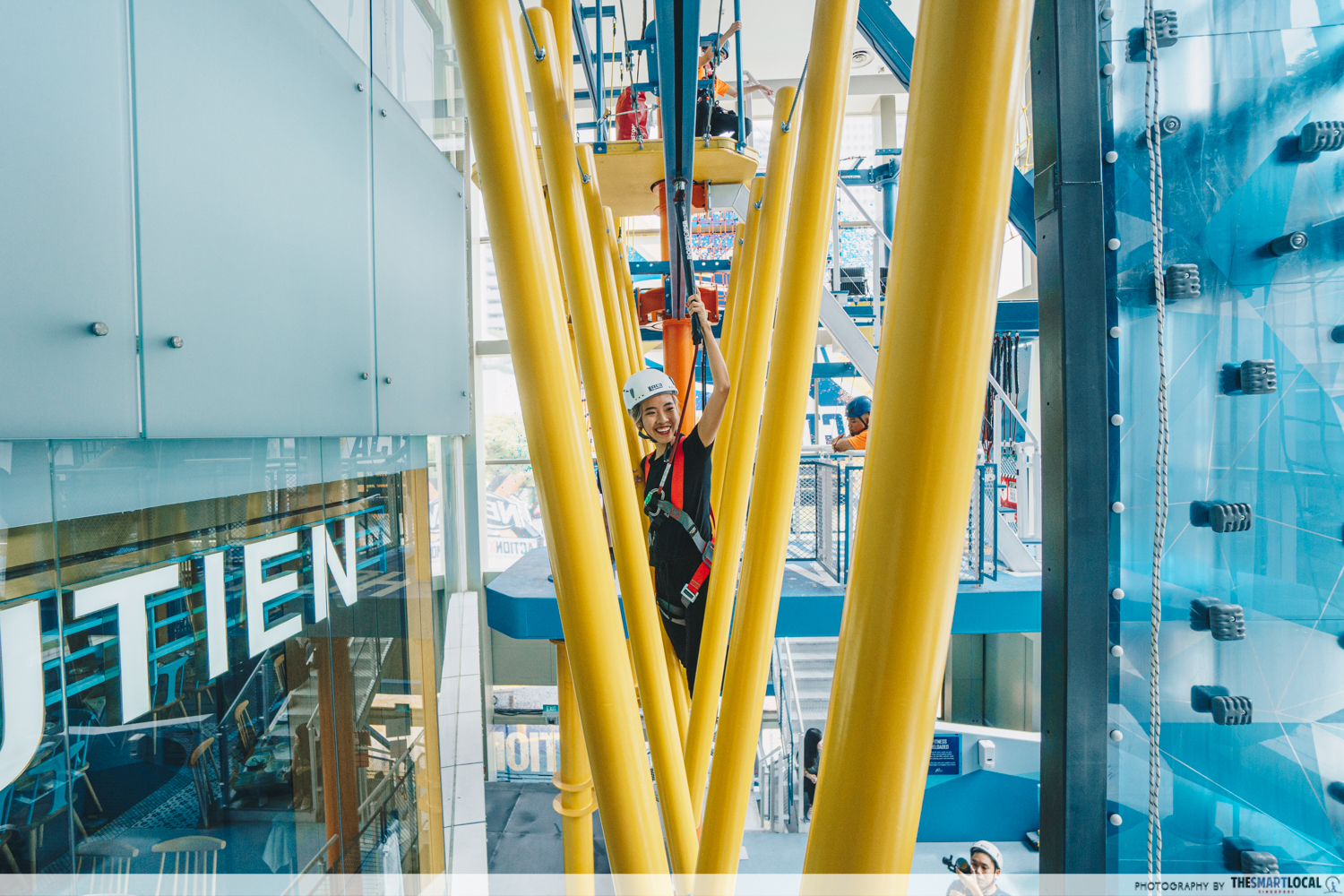 V-shaped pole obstacle. Pro-tip: walk like a supermodel to get through. No kidding. 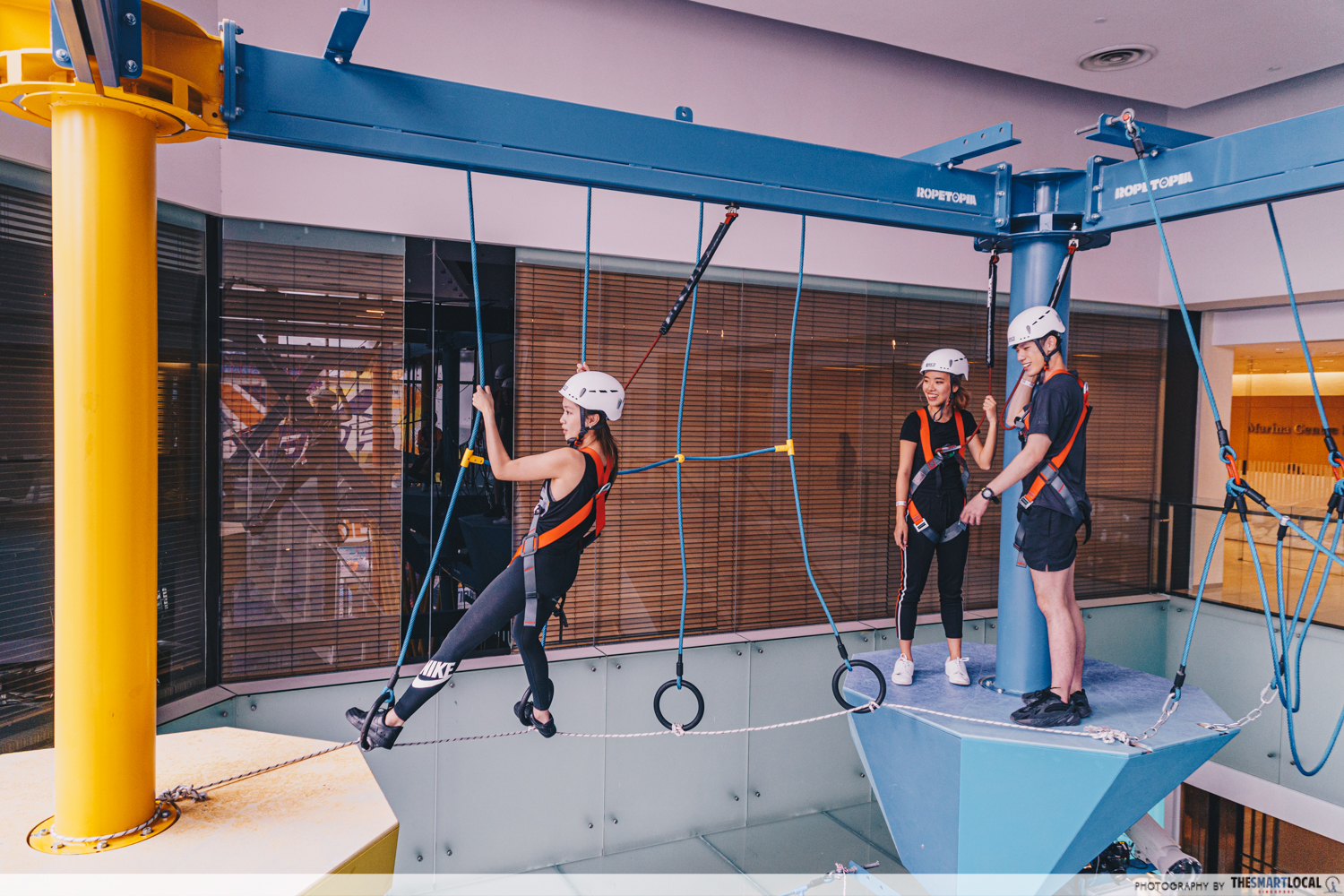 This ringed foothold obstacle was probably the toughest of the lot, although it might not look it. It requires a bit of strategising as you’ll need to plan where to put your feet to avoid getting them stuck in the same loop. The trick is to hold tight using your arms and lean back to give your legs more room for movement. 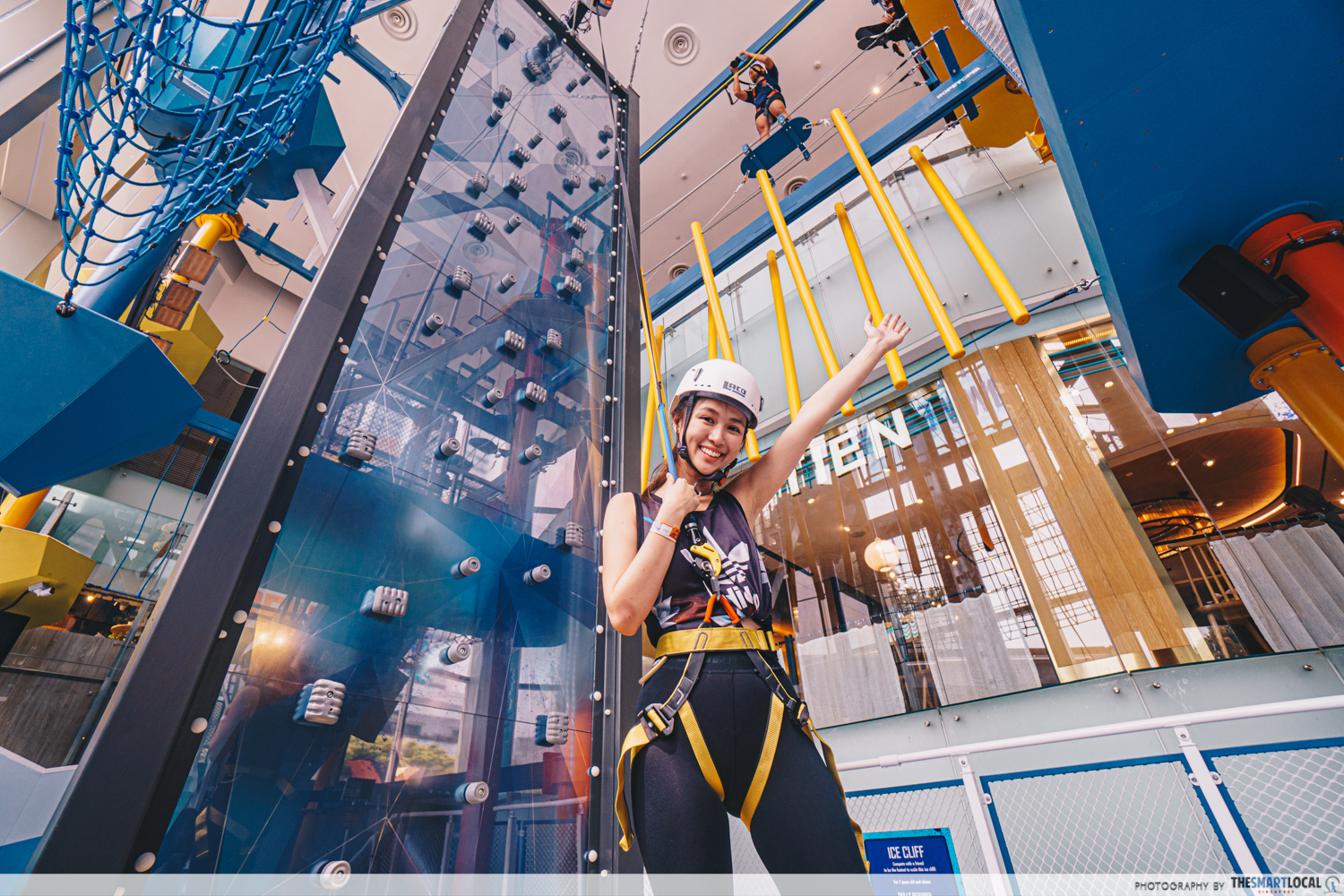 Right next to The Mountain is The Ice Cliff, a double-faced, beginner-friendly rock wall with a transparent partition the middle so you can keep track of where your opponent is as you race to the top.

Since the whole area is indoors, we also had clean, dry fun despite the torrential downpour right outside.

Beat the high-score in a 1-minute timed speed challenge

So you might be fast – but the question is, how fast? And, can you beat the high-score on The Volcano? 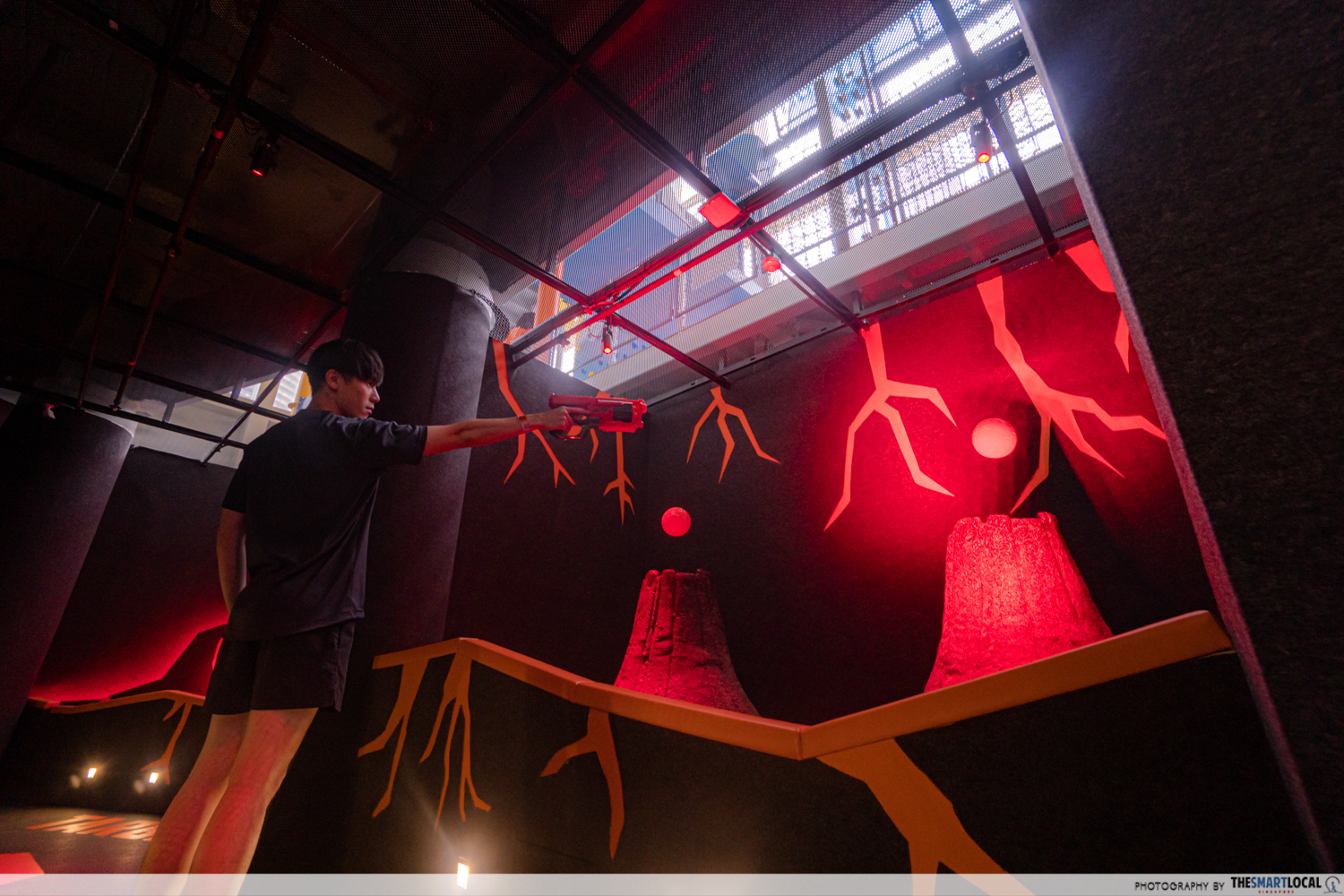 The backstory of this challenge goes like this: you’re stuck in an active volcano and have just a hair-raising 1 minute to get out or be “toasted” alive. While you’re sprinting like a madman, make sure to shoot the targets dotted along the way; and aim right, ‘cuz you only have a limited amount of bullets in your NERF gun! 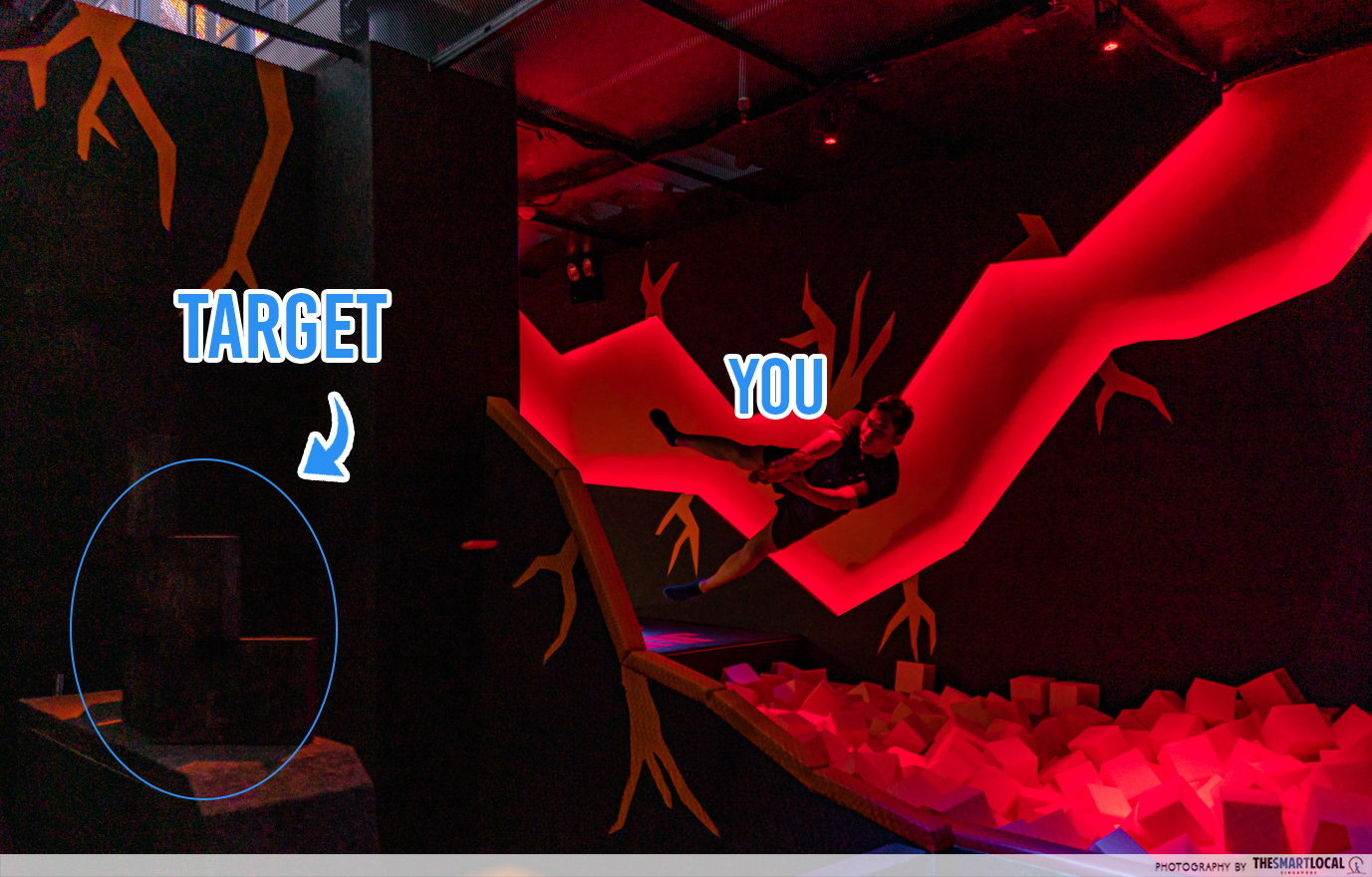 Tokyo is that you?

The finale comes when you need to hit a stacked pyramid of targets. Rather than jumping into the pool, fumbling around, and then shooting, the faster method we discovered was to go on YOLO mode and shoot as you jump forward into foam cushion pool, in true Money Heist fashion.

Let the kids go wild with slides, ball pits, and a rope course 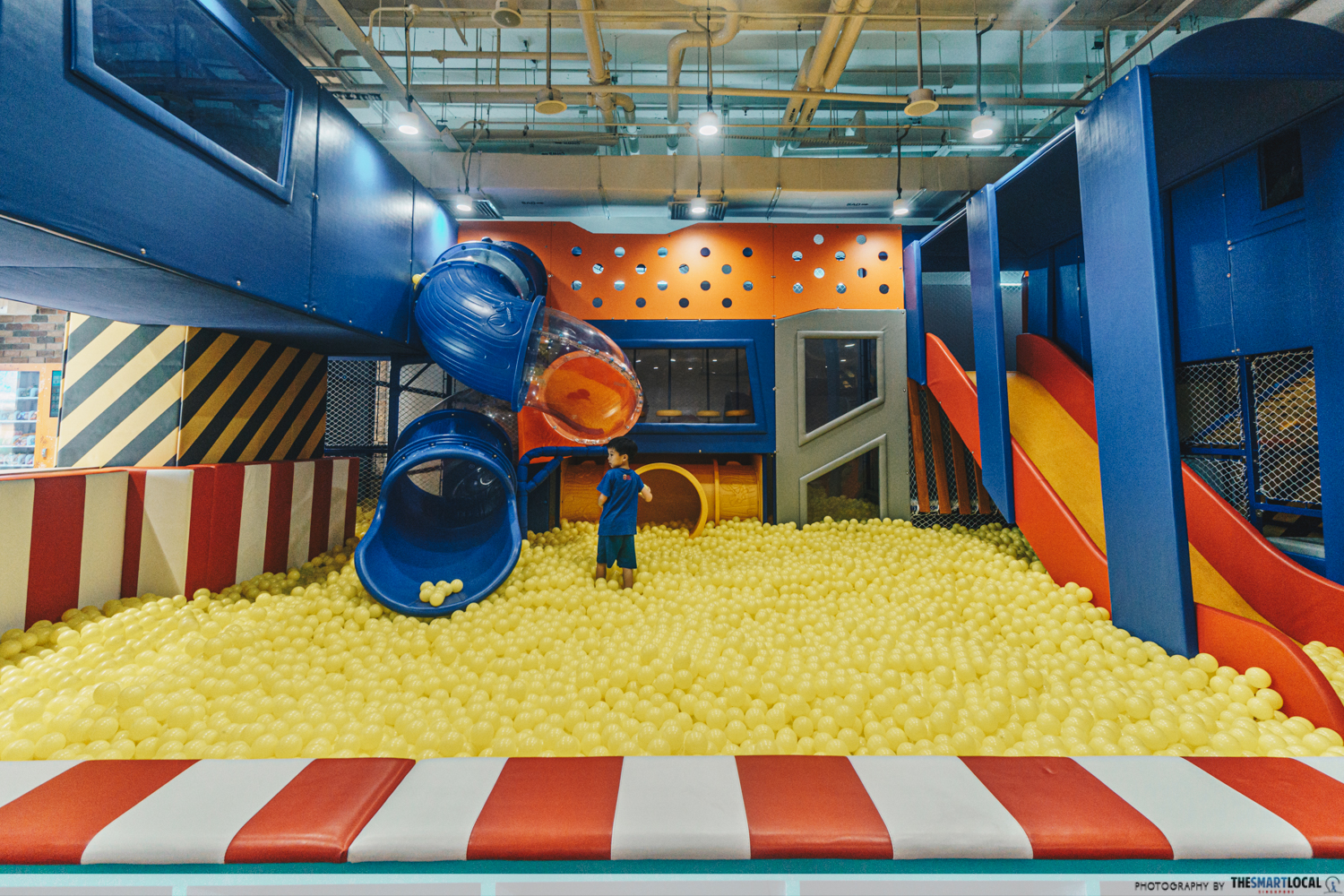 If you’ve got a couple of young ones who never seem to run out of energy, let them run free and explore the Challenge arena, comprising a mini-rope course and a ball pit complete with tunnels and slides. 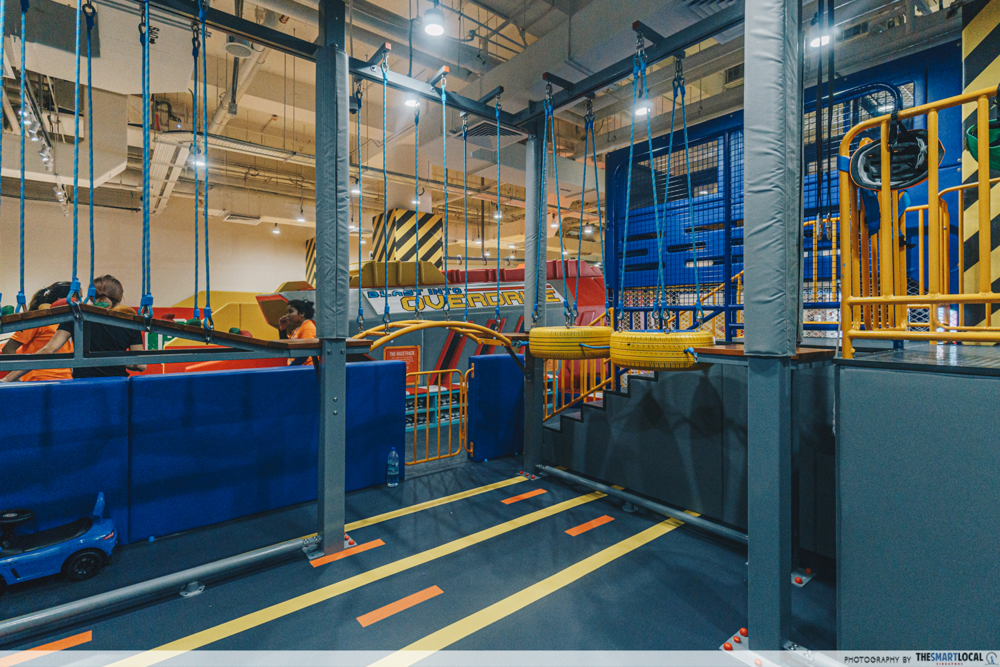 The Expressway – a mini rope course for kids.

Shoot paint to design your own tee and tote bag 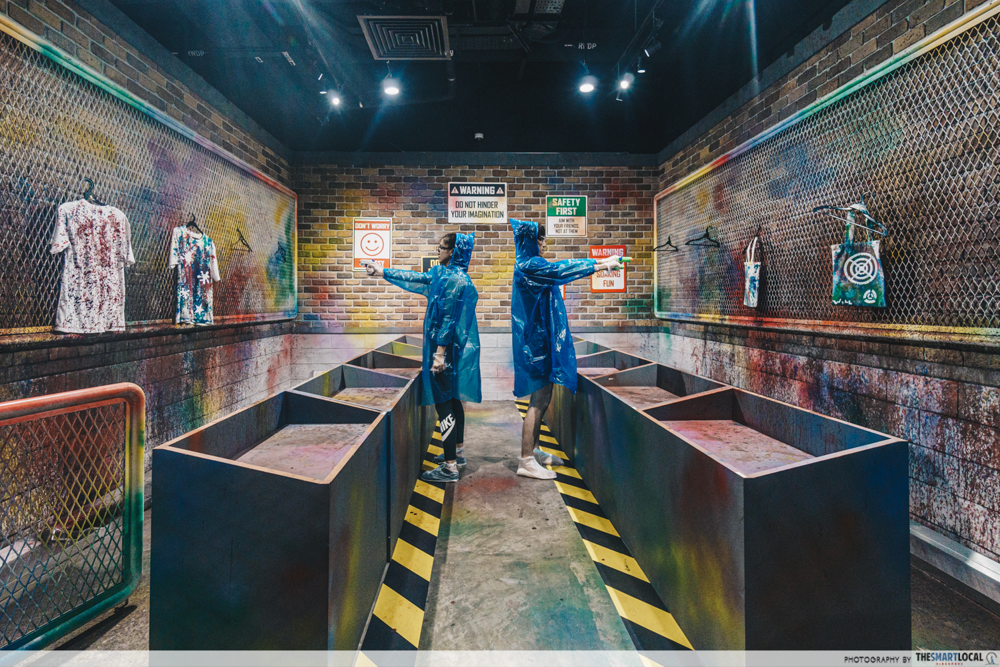 Before heading home, stop by the Create room to DIY your own shirts and tote bags. Here, you’ll be handed paint-filled NERF squirt guns and stickers to come up with vibrant abstract designs. Paint protection gears like a poncho, shoe covers and gloves will be provided so that you don’t walk out drizzled in funky colours. 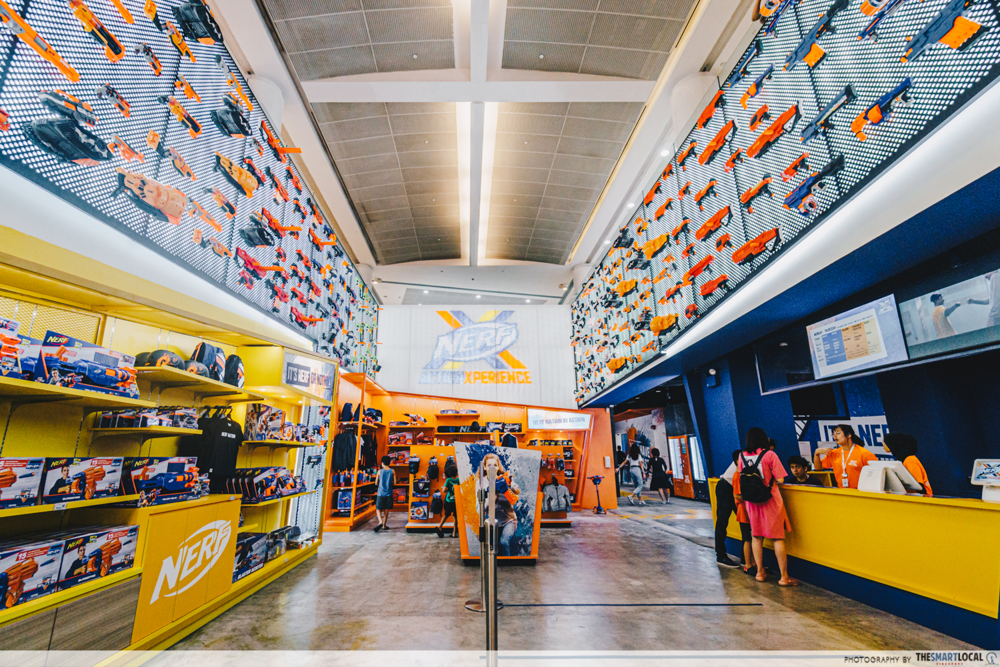 NERF store – grab some guns to bring the experience home.

It’s always been hard to have an actual NERF gun battle for the sole reason that not everyone has the toy on hand. But now, you’ll be able to go wild with the guns, battle location and seemingly unlimited bullets all provided here. 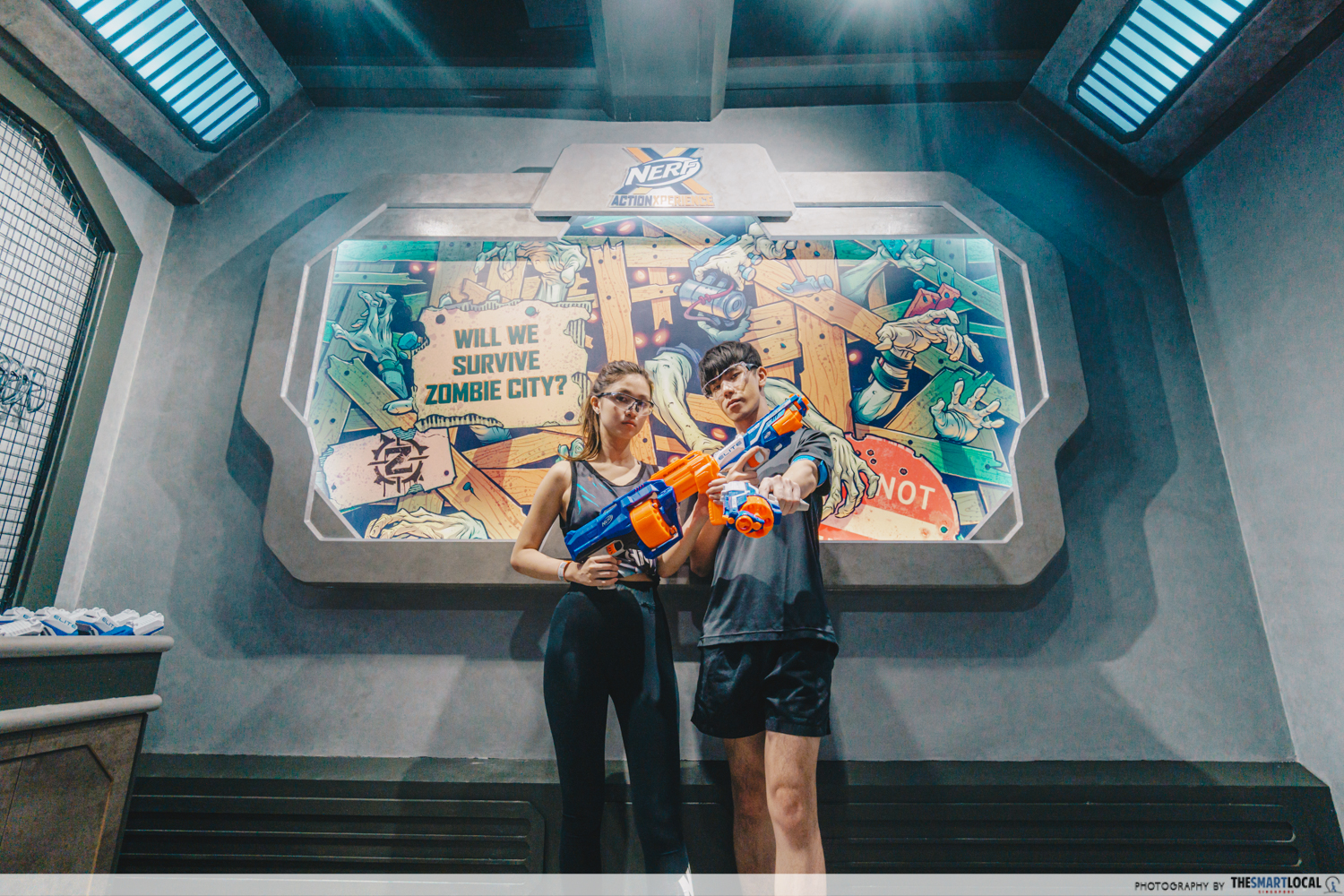 For other fun things to do, check out: 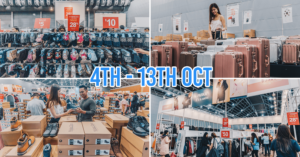 Winter Time’s Expo Sale Has Up To 80% Off With Thermal Pants, Sweaters & Parkas From $15
The Dessert Museum: Pastel Candyland At Plaza Singapura With 5 Themed Rooms Full Of Photo... 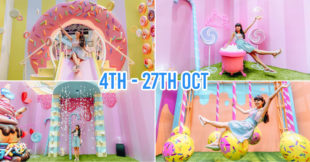