At the risk of sounding like a 52-year-old, kids these days are spoilt for choice when it comes to entertainment – and I’m not just talking about the hundreds of game apps they can download into their iPads. Back in the day, we mostly made do with playgrounds near our HDBs, but today’s young ‘uns have got it good with options like trampoline parks, a suspended net playground, and VR theme park.

Joining that lineup is Kiztopia, the newest kids’ indoor playground in town – also the largest one in a mall in Singapore thus far. It’ll be officially opening on 15th June 2019 with 18 themed zones comprising of AR games, bouncy castles, and ball pits – everything a hyperactive child could dream of.

Read our other articles on indoor playgrounds in Singapore:

With Pio the penguin

Kiztopia has 18 themed zones, many of which are centered around 10 original animal characters. You’ll find life-sized figures of these cuddly animal friends all around – be sure to snap some photos with them!

A humongous plush statue of Bell the bear

Older and more adventurous children will have a field day scuttling through the Ninja Warrior-style obstacle course.

The gameplay is up to you – try crossing while using the platforms of only one colour, or see who can get past without coming into contact with the hanging spiked ball. 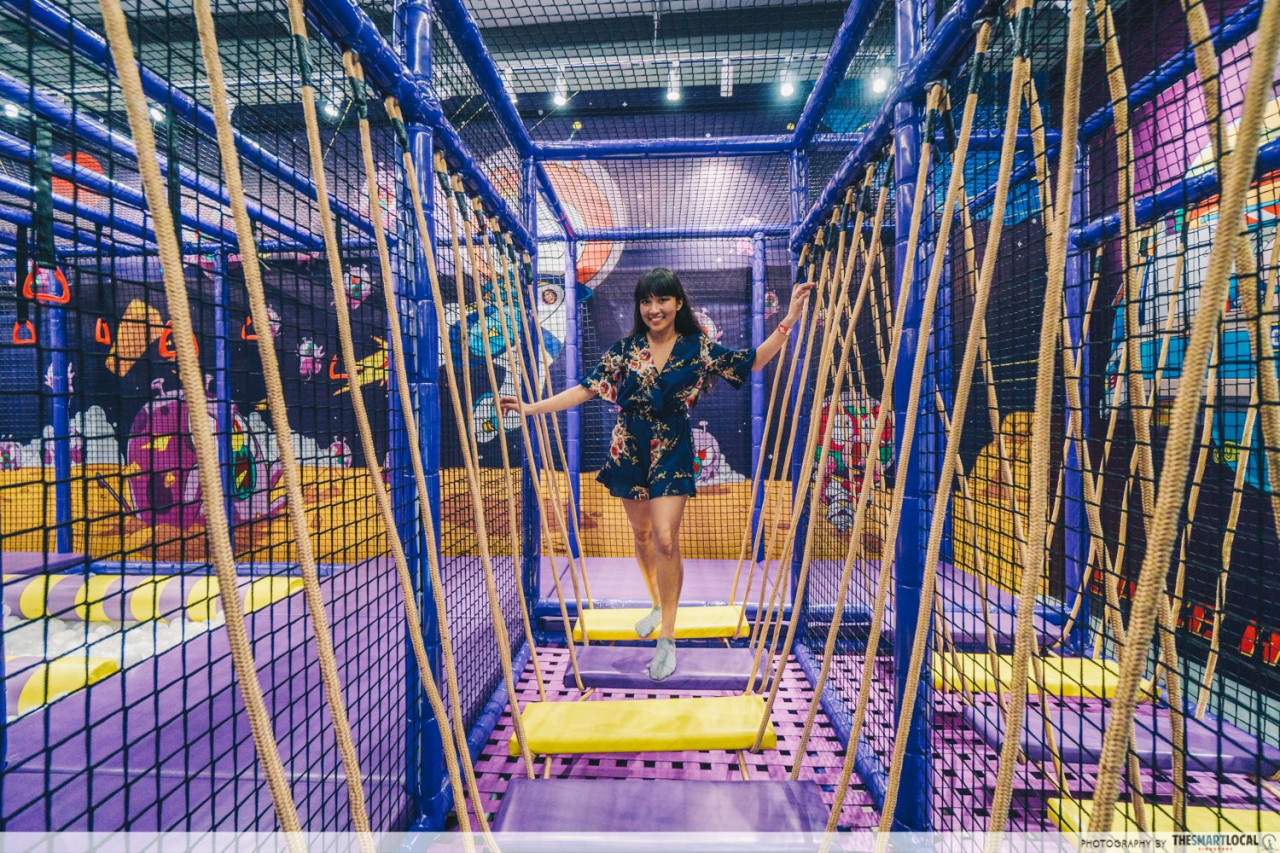 It starts off with a bouldering wall, followed by spinning poles and wobbly planks. It’s more challenging than it looks and we found ourselves falling over a couple of times – but rest assured that your little one will be well-protected thanks to the soft mats.

Hang on tight – the log swivels as you walk along it

This station’s similar to the Spider Climb in American Ninja Warrior, but with soft grab pads you can prop yourself up with

Round and round we go!

Who knew that indoor playgrounds could get so high-tech? At Kiztopia, there are a couple of interactive AR games projected onto walls. We can predict that the basketball game will be a hot favourite, as it allows you to challenge a friend to see who can gain the most points. With every hit, the basketball hoop changes positions so you’ll be kept on your toes the whole time.

Another game requires you to pick your favourite landscape – land, sea, or outer space – and throw balls at targets on-screen.

Of course, no playground is complete without a slide, and there are a whole bunch of ‘em here to whizz down – including a pair of thrilling 2-storey spiral ones.

Some of the slides end in a ball pit, while others will have you landing flat on your bum on a mat. But don’t worry, the fall won’t hurt if you keep your arms and elbows away from the sides to prevent any friction burns.

Look at the sheer height of this thing – ft. human for scale

You have to work for it though – many of the slides require you to scale maze-like climbing structures which come with a fair deal of obstacles.

I came in like a wrecking ball…oops, dead end.

Both the spiral and straight slides throughout the premises are pretty darn fast – even the shorter ones – so we suggest that toddlers are accompanied by an adult.

The beauty of a child’s imagination is that there really are no limits, and there are various role play stations here to fuel that while helping in the development of motor skills.

The most adorable wooden teacup set ever – check out the matching teabag!

For the foodie kids, there’s a kitchen where you can play “masak masak” or pretend to have afternoon tea. Some of the food items are put together with velcro, which allow you to “cut” through them realistically.

Interestingly, the croissants, buns, and sandwiches are scented – just like the real stuff

What really wowed us was the mini grocery store with super life-like toy vegetables. There are also toy cash registers complete with fake money in them.

Aspiring princesses will love dolling up in the dressing room with beautiful gowns and vanity tables. Young men aren’t left out either, with superhero costumes for well-loved characters such as The Hulk, Captain America, and Thor.

If the large ball pit where the 2-storey slides are located is too overwhelmingly rowdy for your tot, take heart in the fact that there’s a smaller one further off from all the action. It comes with its own toddler-safe slides, and a scaled-down version of Ninja Warrior’s Floating Steps obstacle.

Next to it is a sand pit, although instead of actual sand, it’s filled with brown plastic granules for the sake of cleanliness. There are buckets and shovels for digging, as well as toy trucks which you can fill and push along.

Remember those battery operated car rides we used to enjoy as kids? Those have long disappeared from our neighbourhoods, but the younger generation can still enjoy them here. Apart from that there are other smaller cars you can push with your feet.

Pro tip: If your mini-me has gotten a little tired, stifle those impending whines by popping him onto the train ride. As it is fully automated, no work is required on their part, giving both them and you a short period of rest. Phew.

A carnival favourite, the bouncy castle here will give kids unbridled joy as they jump around and try to keep their balance. There’s even a short slide on the inflatable structure itself. 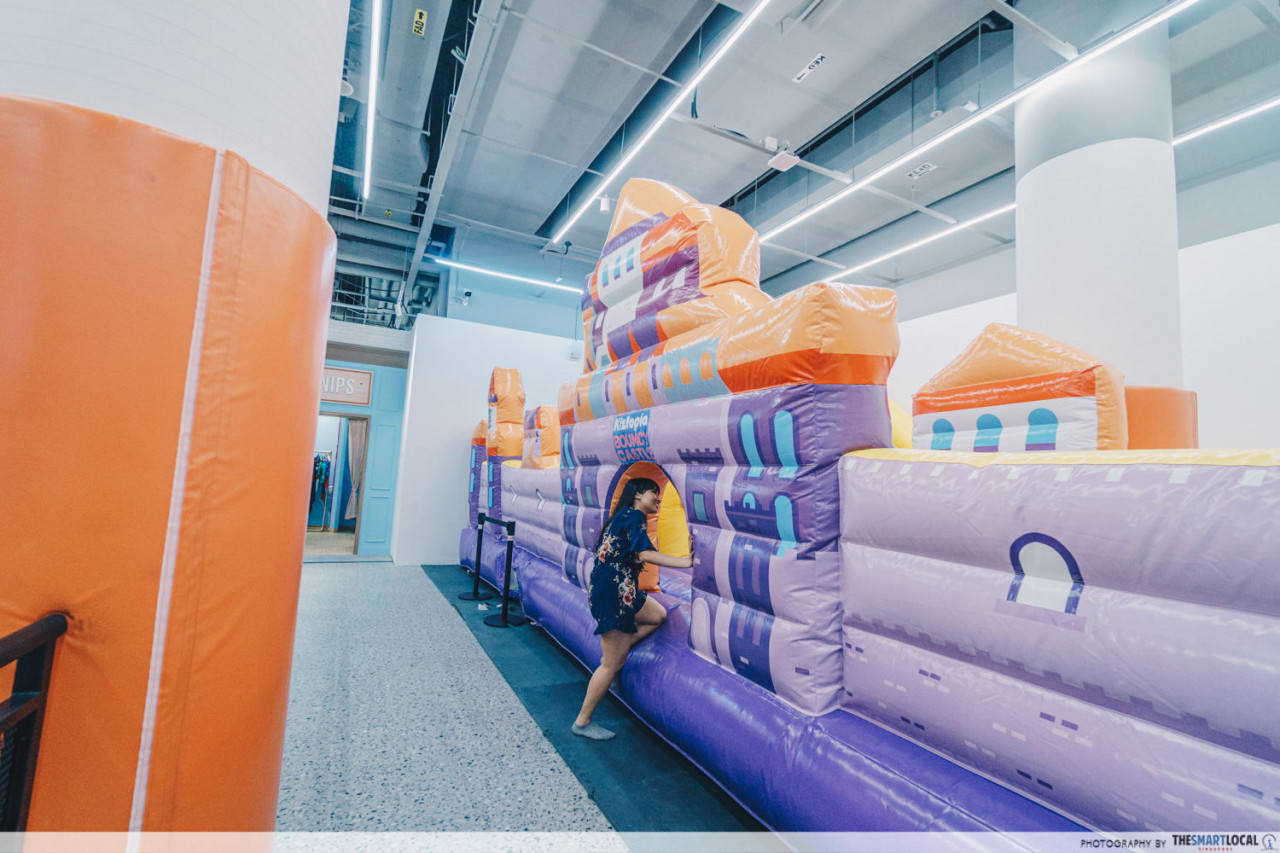 If you’ve got some coins to spare, let your child try his luck at the row of claw machines to win plushies at $1 per play.

Kiztopia is the perfect venue to host a kid’s birthday party, and there are function rooms which you can rent to facilitate that. Both rooms are brightly lit, each coming with a TV, cheery posters of the characters on the walls, as well as building blocks and colouring sheets on the tables.

For larger events, you can rent both rooms and have the partition in the middle pushed aside.

We’re no parenting experts, but if even we childless young adults in our mid-20s had fun at Kiztopia, then we bet your kids will too.

This wonderland of slides, games, and obstacles is suitable for those 12 years and below, and what’s great is that the different zones within cater to children of various ages – so you can let your older ones run free while you supervise the tots as they frolic in the milder areas.

Shoes have to be removed, and socks worn at all times. Free lockers are provided for you to place your other belongings in.

Check out these other articles for more ideas on things to do with your kid in Singapore: 12 Cafes In Singapore With Vegan Burgers From Impossible Foods & Beyond Meat
Triumph’s Great Singapore Sale Has Buy 3, Get 1 Bra Offers For The Wardrobe Refresh... 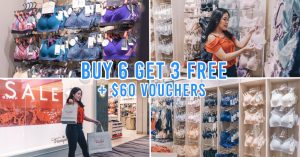