As a kid, pasar malams were special occasions when I could stay up past my bedtime. The excitement begins when they start putting up the iconic makeshift stalls. In broad daylight, the stalls are deserted, but once night falls, the pasar malam comes to life.

Other than the annual pasar malam at Geylang Serai before Hari Raya Puasa and the Chinatown Street Market before Chinese New Year, pasar malams aren’t all that popular anymore. Even though the distinctive red and white tentage hasn’t changed, pasar malams feel different now. So here’s a list of 10 of our favourite things we loved about pasar malams back in the day. 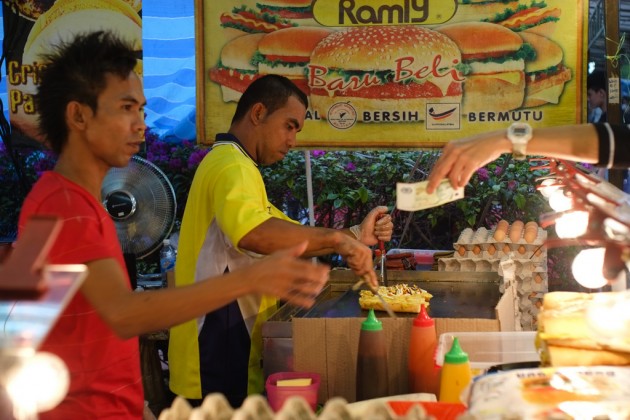 Forget McDonalds. A pasar malam must-have is a Ramly burger. With the “Ramly” logo printed prominently on their banners, these stalls weren’t exactly affiliated with “Ramly”, but with a freshly flipped patty and generous dribbles of sauce, it tasted fantastic. It didn’t matter if we already had dinner, a Ramly burger was the first thing to get at a pasar malam.

When I was younger, I used to be really excited when I found a Ramly burger stall because they were relatively uncommon back then. The novelty has worn off since then. Nowadays, there might occasionally be too many Ramly burger stalls in the same pasar malam!

With a burger in one hand and a stick of fried fish balls in the other, you’re ready to venture beyond the food section. 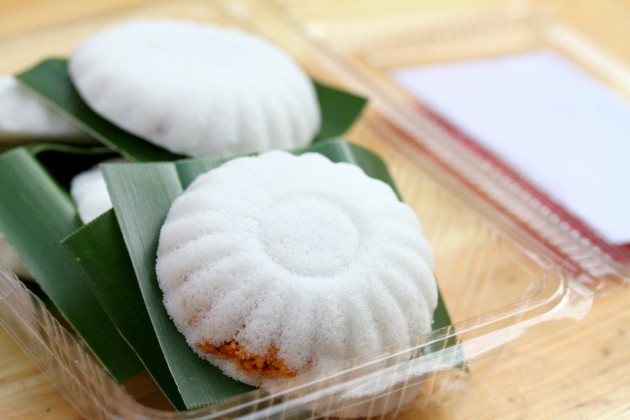 After the effects of the burger wear off, you’re ready for a midnight snack. They used to sell these at 4 for $2. The ultimate dilemma: coconut or peanut? 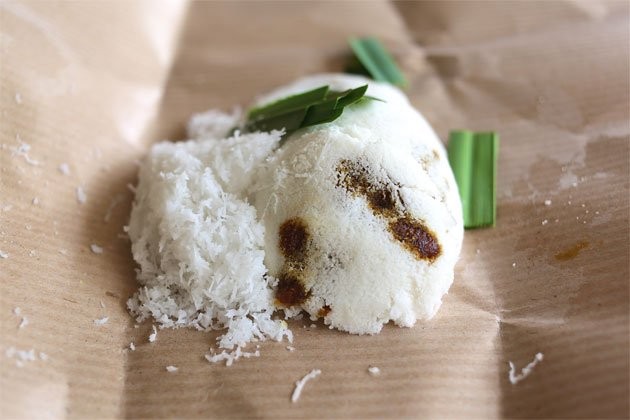 And then there was putu piring. The lesser known relative of tutu kueh, it’s filled with gula melaka, served with shaved coconut. Best pasar malam snack EVER. 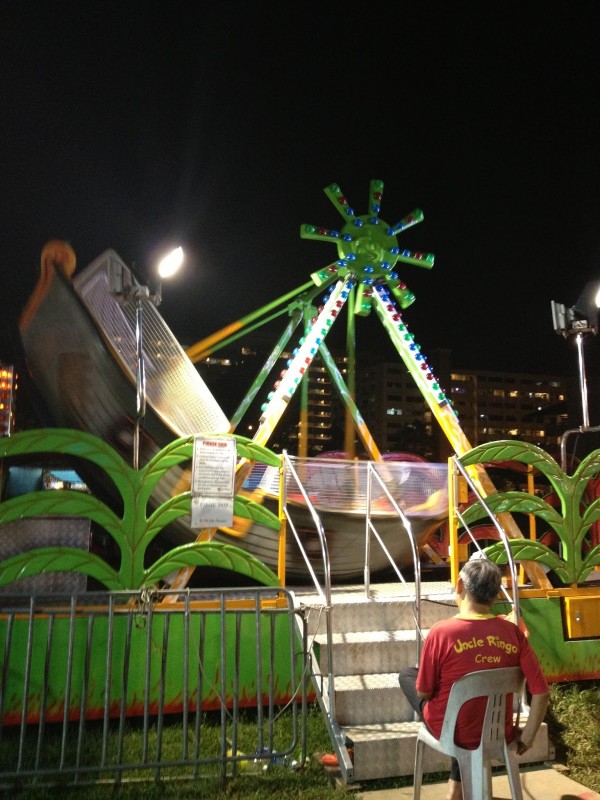 I can’t have been the only one who thought Uncle Ringo was a real person. Unlike the elusive ‘founder’, these rides were a staple at almost every pasar malam.

These temporary carnivals were the most fun we could have in Singapore, especially before the days of Escape Theme Park. The Viking was a favourite with the older kids, while the younger ones headed straight to the bouncy castle. 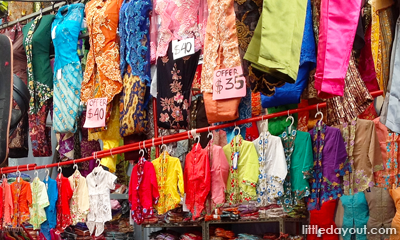 Almost everyone bought their Racial Harmony Day outfits from the pasar malam. Traditional costumes came in all sizes. There was something for everyone – from babies to mini humans to fully grown adults.

Don’t forget the best part – when the outfit you want is displayed high up there and you manage to persuade the stall auntie to let you use the clothes retriever to get it down. 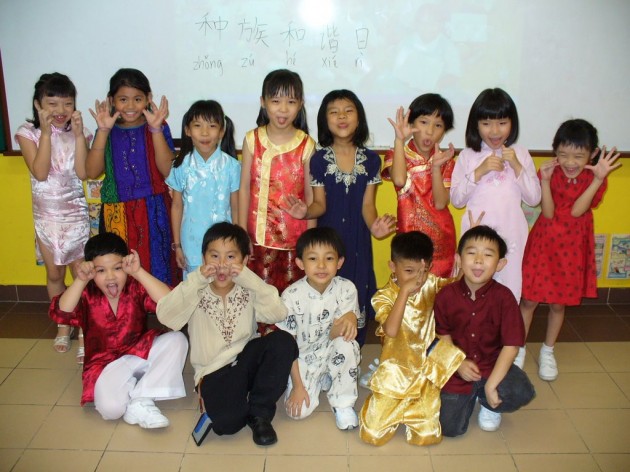 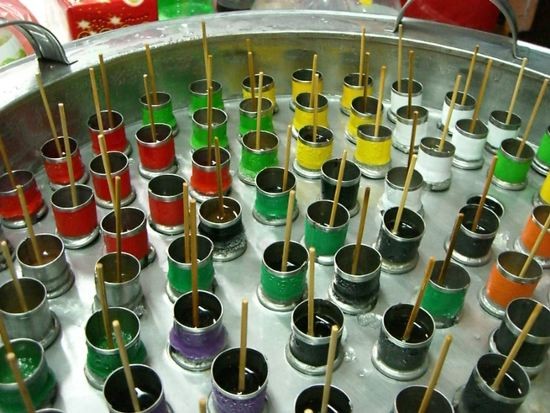 After squeezing through a horde of sweaty bodies, it’s a great relief to see one of these machines. No one was fooled by the “grape” or “orange” flavours; we all knew they were just Fanta soft drinks. Not that we were complaining. One of these ice pops and we were instantly refreshed, ready for another round of carnival rides. 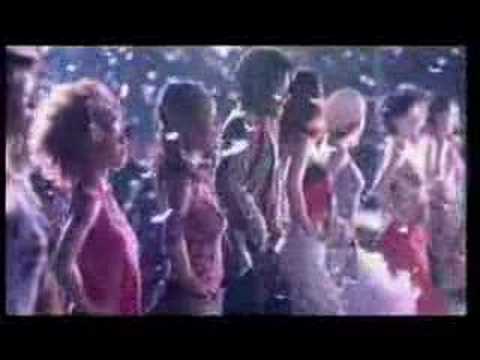 You heard them before you saw them, blasting the latest Jolin Tsai songs, old 80s hits or the unmistakable sounds of a martial arts fight scene. Or, more often than not, all three at the same time. Within the same stall, there would be at least three different TVs – you could watch a music video, an episode of Barney and a Chow Yun-Fat movie at the same time!

We were never sure if the DVDs/CDs/software worked, but they were dirt cheap (the latest Hollywood flick for less than $10? No way!) Still, judging by the whispers of expert bargain hunters in the crowd, the pirated goods were brought from Johor to Singapore in bulk. “Wah so expensive! Last time I go JB I bought 10 CDs for $10!”

It’s one of those games that’s more fun to watch than play. There would always be a gaggle of children gathering around this large tub, watching two or three people try to “catch” a frog. The players would hold the fishing rod with both hands, trying to snag a prize, while their friends tried to disrupt them by stirring the water. 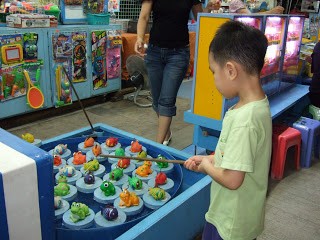 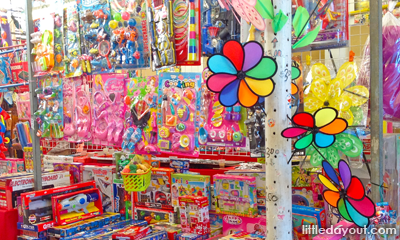 Imagine passing by a stall chock-full of toys. Draped all over the makeshift canvas walls were toy guns, soft toys, dolls and my favourite back then, masak-masak. The toy stall was every child’s haven and every parent’s headache. There was always a little display table, right in the middle of the stall, for the electronic toys to “roam” around. I can’t say for all parents, but I know mine found the yapping electronic dogs irritating!

It’s not all fun and games. Many parents bought rotans at pasar malams. Each rotan came with a brightly coloured handle and a bunch of bad memories.

9. HOW CHEAP EVERYTHING WAS

Before the advent of online shopping, pasar malam prices seemed unbelievably cheap. We bought most of our household items there, but not before thoroughly testing the product. I remember lying down on a mattress in the middle of a crowded pasar malam to check its comfort and testing all the different nail clippers to find the best one.

Need new clothes? Buy “Addidas” or “Jucy Couture” sweatpants for less than $10. How about new pots and pans? All yours – a whole set for under $20. So everything was fake, but what a steal! 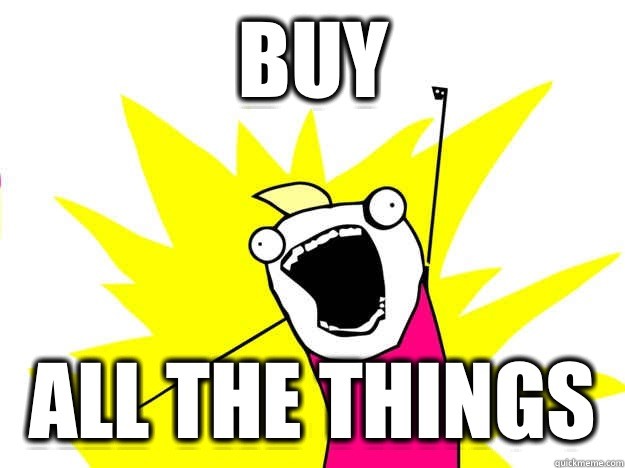 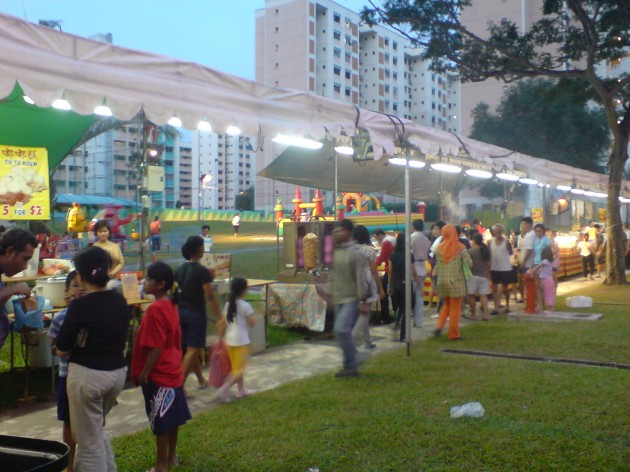 From the moment you walk into a pasar malam, the sights, sounds and tastes nearly overwhelm your senses. I remember being fascinated by the bright lights, the red and blue canvas covering the makeshift stalls, the sheer number of people pushing and shoving their way through the crowd.

The sounds of traffic mingling with cries of “lelong, lelong!” and the hubbub of the crowd and that delicious sizzle when raw meat meets hot oil. I remember going home tired and sweaty, reeking of fried food, unable to sleep until the excitement wore off.

It was uncomfortably crowded, it was unhygienic, but it was exciting, it was festive.

Where are the pasar malams now?

That was then. Sure, there are still pasar malams around, but it’s not same. Maybe everything was fascinating from a child’s perspective, but pasar malams feel less authentic now. The variety of food available is larger than ever – popular Taiwanese street snacks have made their way here and the Turkish kebab man seems to be a staple at ‘modern’ pasar malams.

Yet, there’s something missing. There’s no excitement in walking around pasar malams today, only a tangible sense of nostalgia, as if everyone was not truly there, but reminiscing about the past instead. If you want to relive your old memories or make new ones, find out if there’s a pasar malam in your area here!

Too many fond memories of pasar malams? Share them with us in the comments below! 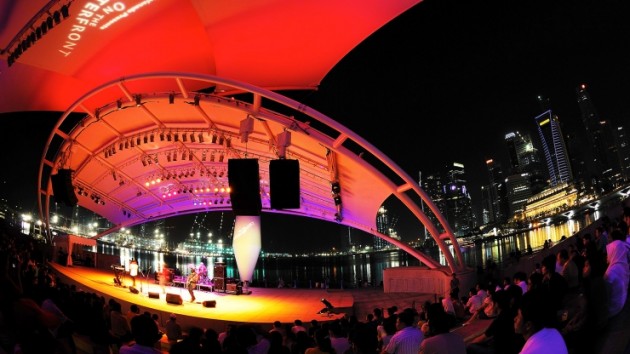