As 90s kids might remember, classic arcade games were the one thing our lunchtime hangouts used to be followed by. They’ve since had a major evolution, with features like claw machines and VR popping up left and right. But for a taste of it all at once, New World Carnival at Marina Square offers a glorious hodgepodge of some of the best gems arcades have had to offer over time. Virtual reality (VR) arcades provide an immersive twist that traditional games don’t. You may have heard of Sentosa’s HeadRock VR or Orchard Central’s Sandbox VR – but few have as wide a range of games as New World Carnival, which brings a variety of eight VR and augmented reality (AR) games to its 9,624sqf-space.

For the best experience, start with the mildest game and work your way towards the most exciting – thrill factors and prices are included below. 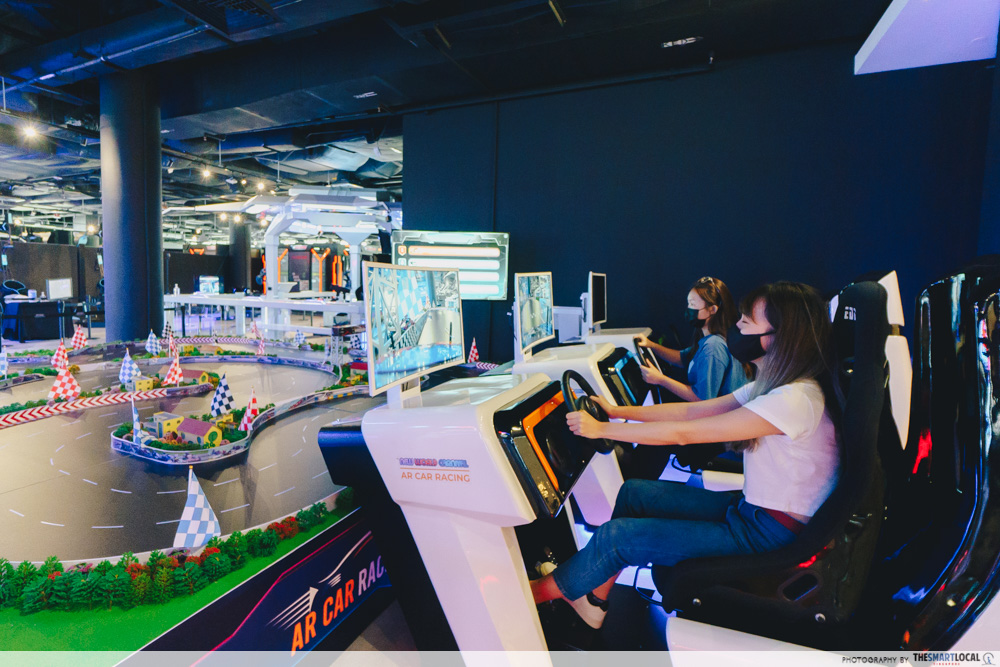 Right at the entrance of the arcade is the AR Car Racing, a great first ride to try if you’re on for starting your day on a competitive note. We loved that you’ll be driving physical cars – albeit remote-controlled toy ones, running through a mini track filled with twists and turns. Fortunately for us, you don’t have to be a good driver in order to have fun – there are no gears to change or confusing buttons to press. All you have to do is step on that accelerator in a bid to overtake your friends before the timer runs out.

Pro-tip: If you’re a terrible driver who can’t seem to keep your car in lane, use the reverse pedal to get unstuck and get back on track.

Players: Up to three Just the other day I was walking on a thin pole off a high-rise building collecting eggs… said no one ever. But you might just believe that that’s your reality with the hyper-realistic setting of the Egg Drop simulation module at the VR Sky Park. Although we all know it’s just pixels on a goggle, the immersive audio and wobbling platform go a long way to making the experience a heart-palpitating one. Feel that sense of vertigo as you complete the tasks while trying not to fall off the virtual beam. To shake things up – quite literally – the cheeky staff will also occasionally jiggle the wobbly platform you’re standing on. 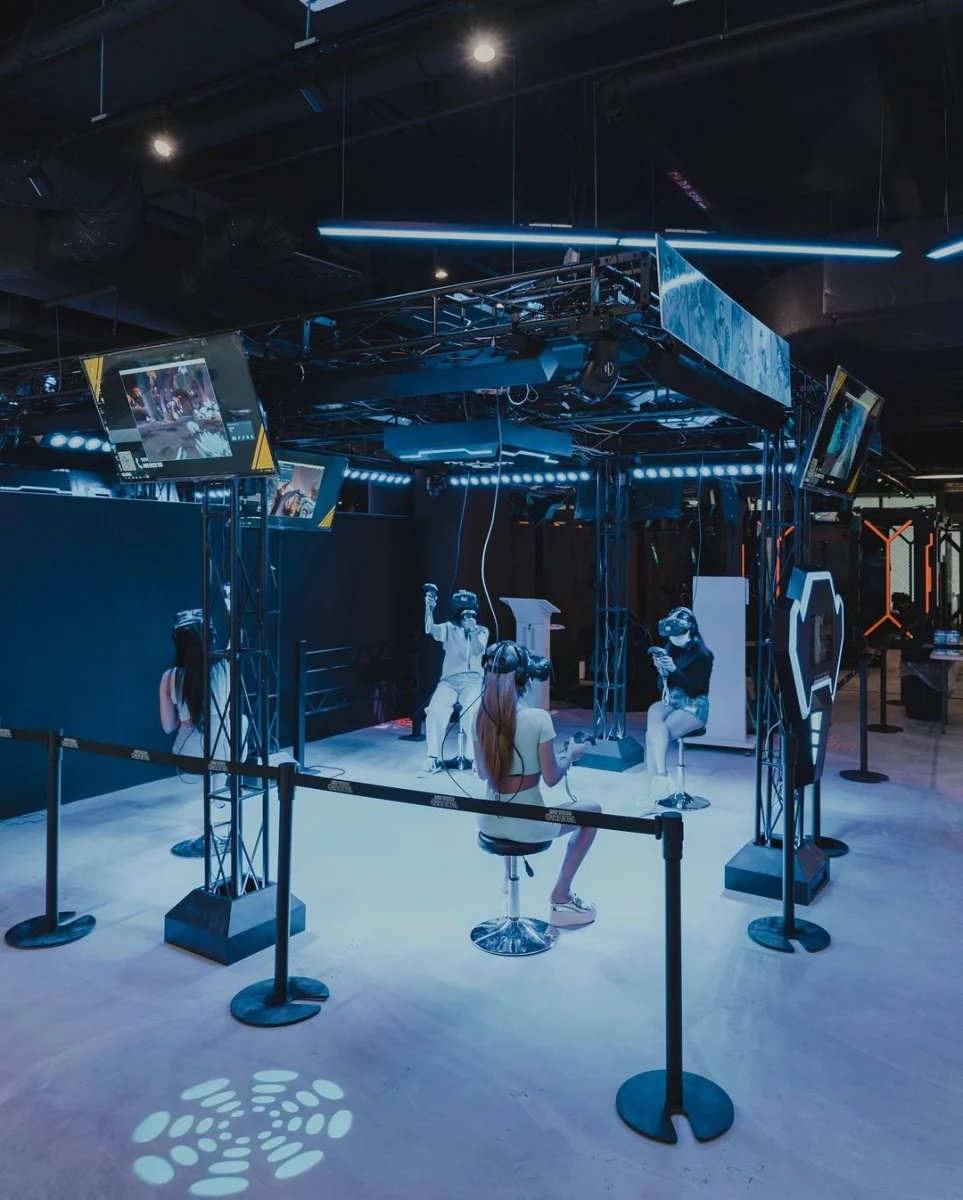 If you only have time for one game, try this. Encapsulating the best of VR experiences is the VR Space, where up to four players, armed with snazzy rifles, can work together to go head to head against monsters and aliens in an intergalactic world. The cool thing about this is, much like multiplayer games such as Overwatch, you’ll be able to see your friends’ avatars in-game. So watch each other’s backs and defeat the alien bosses in sync to complete the 10-minute battle.

Players: Up to four
Price: 15 credits per player
Thrill factor: 8/10. Fast-paced, but the aliens aren’t too scary.

Since we can’t floor the pedal without a love letter from the traffic police, the 4D AR racing game is your next best bet at Tokyo Drift-ing legally. Keep your foot on the accelerator to zip through six enthralling settings – from futuristic tunnels to scenic nature reserves – and come out first in the race.

Those who grew up with Daytona may know that racing games are best enjoyed in PVP. So you may be glad to realise that similarly, you’ll be able to challenge your friends to see who’s the real “Vin Diesel” here.

Players: Two
Price: 12 credits per player
Thrill factor: 6/10. It’s a scene out of Fast and Furious. 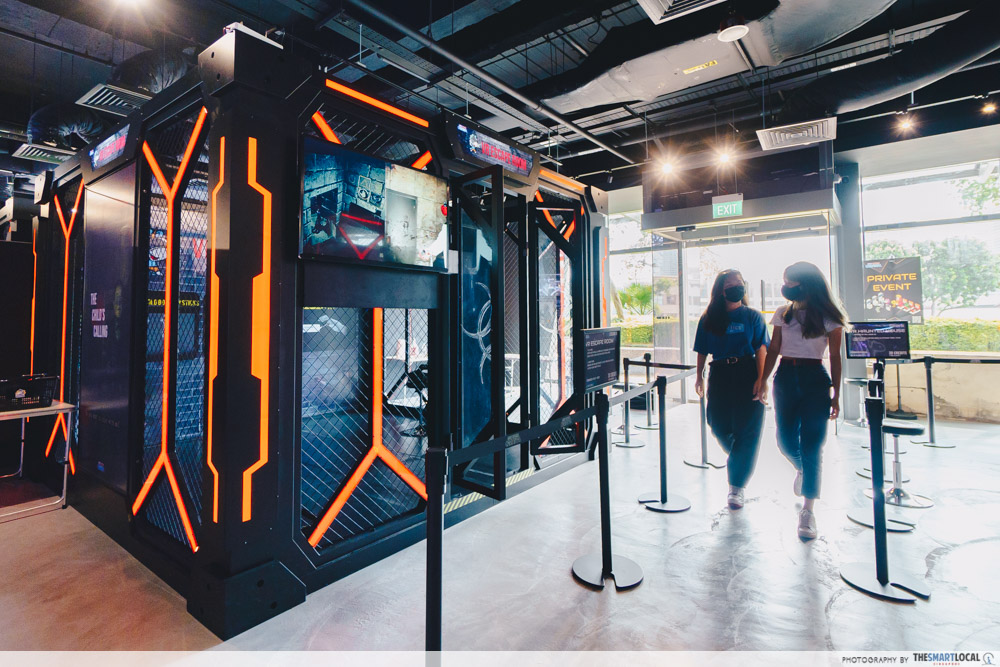 The VR escape room amps up the thrill factor by taking you not just to a regular ol’ room with props, but another thrilling dimension altogether. Once the goggles and headphones are on, you’ll find yourself in spooky settings like an eerie dollhouse or madman’s prison. In this two-player game, work together with your buddy to solve mysteries and riddles before the timer runs out; and try not to burn any bridges while you’re at it. There are four different modes to pick from, but if it’s your first time trying a VR game, Jacob’s Prison (beginner) is a good place to start, with slightly easier tasks. There are always two camps to horror – some like it and others avoid it like the plague. But if you’re looking for something that somehow falls between the two for your next group gathering, the four-player VR haunted house is good middle ground. Light up all five candles to complete the game

It’s not that it isn’t scary – your senses will still be overwhelmed by the supernatural creatures and ghastly ghouls haunting you as complete team-based challenges. So fans of horror, you’ll definitely still get that much-desired kick. But for those who want out, tapping out is as easy as removing your headset.

P.S. Be nice to the staff as they’ll play a part in this game. As to how, we’ll leave that as a surprise. 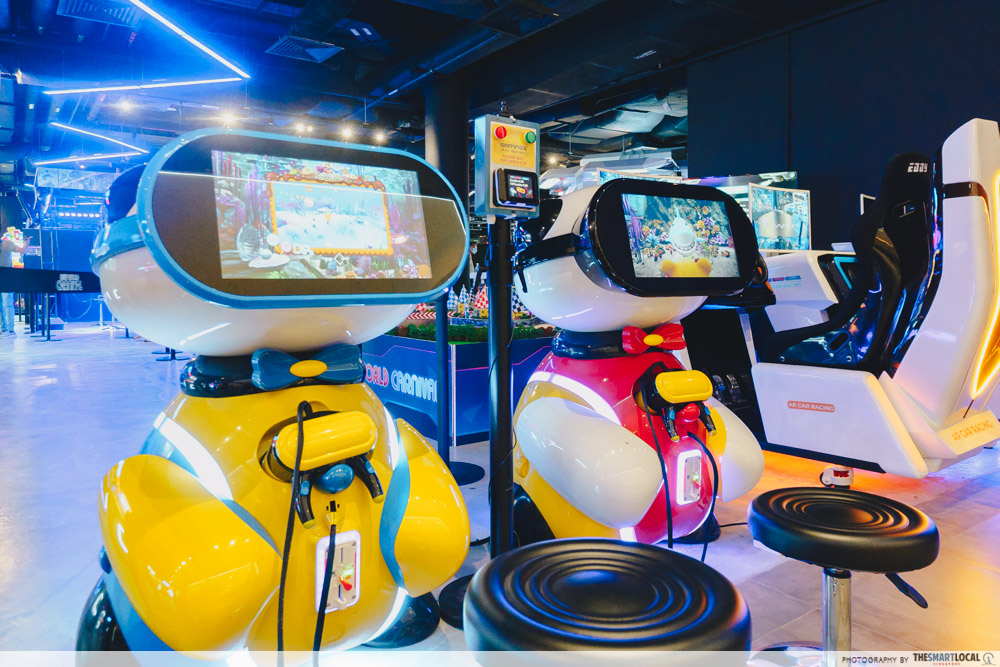 Little ones won’t miss out on the futuristic fun with the arcade’s VR game for kids: Baby Bear. No worries, unlike the rest of the games, these are all PG13, so no aliens, madmen, or ghouls will be hopping out here.

Attached to a yellow robot are handheld goggles that kids can hold up to their face, exploring more than 15 different light-hearted games. Parents will still be able to monitor the game and cheer on their little one as the game will also be projected on the robot’s face for all to see. Classic arcade machines may have given way to more trendy games at popular spots such as Cow Play Cow Moo. But at New World Carnival, you’ll still be able to find a handful of familiar 90s kids favourites that we know and love. Defeat the high score at the basketball machine or flex your strength at the hammer jackpot. If you’re in a group of four, the perfect spot for an intense battle with your friends is the four-player air hockey, which features one goal on each side of the table so everyone can participate in some chaotic fun. Between rounds of intense arcade games, test your luck and patience at the good ol’ coin-pusher at the Sky Tower. Before you pull your hair out trying to find a strategy to win, pick a machine already loaded with more coins within for a greater chance of snagging more tickets. Carnival-like games with flashing lights and colourful visuals such as this modern ball-pushing whack-a-mole are also available for kids to try out. Redeem prizes from snacks to Nintendo Switches with your tickets 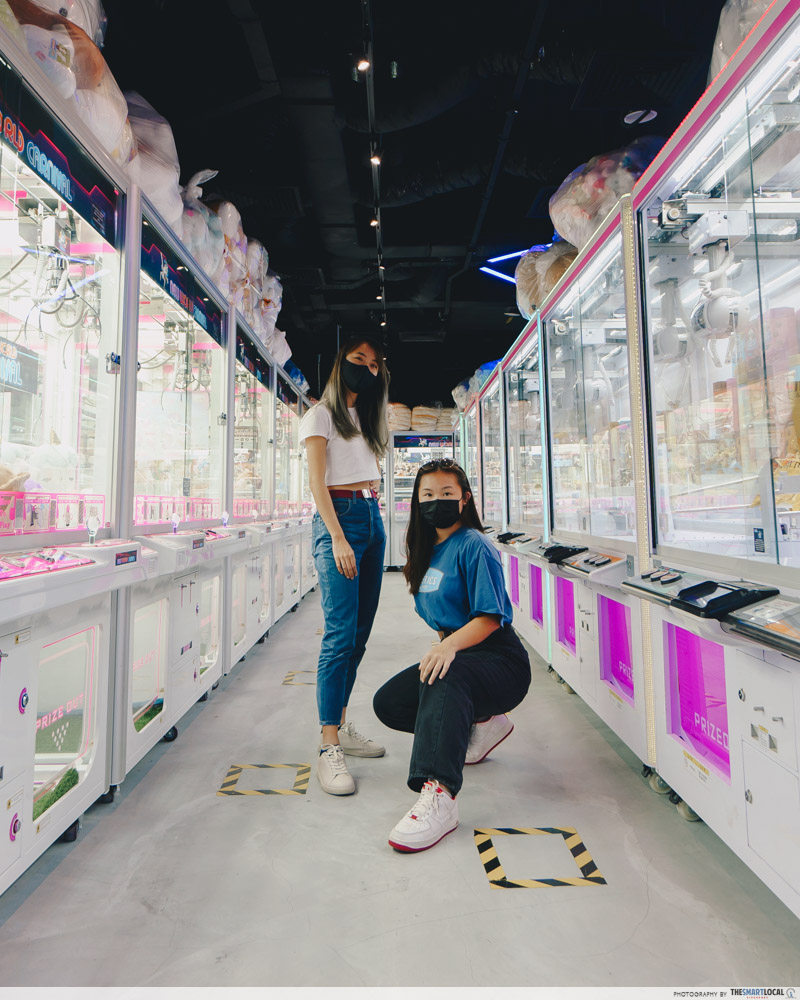 There’s nothing quite like the thrill of finally snagging that claw machine soft toy you’ve been eyeing ever since your hands landed on the joystick. And lucky for us, there’re plenty of claw machines here, filled with quality plushies to get your hands on.

Unlike the odd-looking Pikachu or deformed Hello Kitty that we occasionally come across, the plushies you’ll find here are authentic and licensed, shipped in from Japan and the USA. 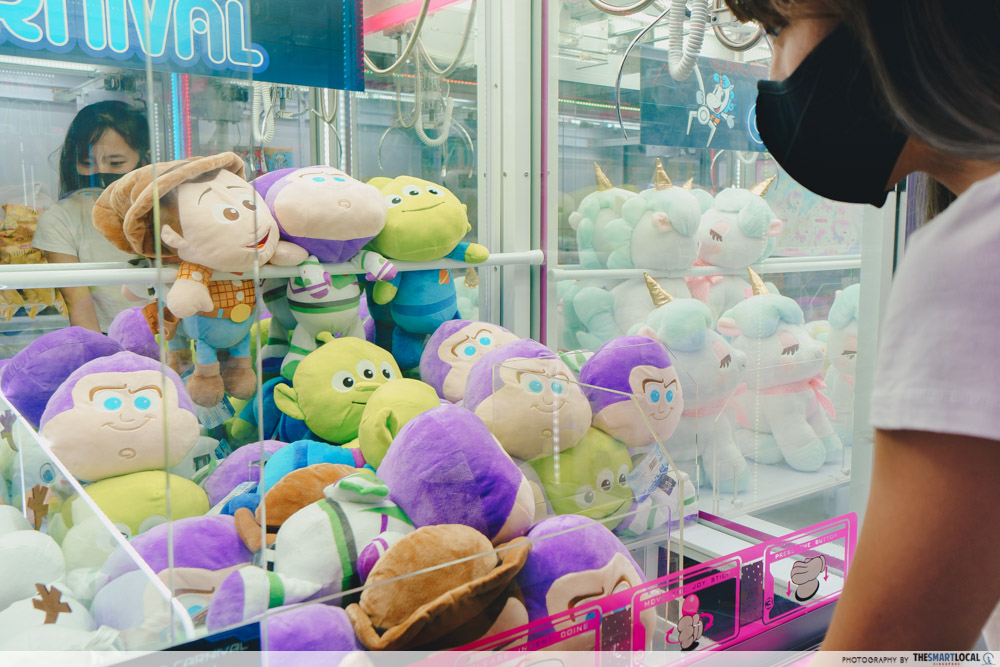 Among the ~30 machines, we spotted adorable Toy Story, Avengers and Pokemon soft toys.

Getting them is often easier said than done since claw machines are half-luck and half-skill. To impress your boo with a trophy toy to bring home at the end of the day, remember you’ll usually need multiple tries – so set aside the budget for it. Also, try to go for plushies nearer to the edge for a higher chance of success. We actually won a Shiba Inu plushie (3 medals/round) on our first try! Pro tip: Aim for areas of the plushie with more shape, such as the bum area with tail and legs as they help provide a better grip.

Visit New World Carnival for your next arcade sesh A Singaporean’s love for arcades never really dies. From the good old days where we used to yell our way through Street Fighter till now, arcades have never failed to provide unadulterated fun. If you can’t say no to a good bout of games with friends, New World Carnival might just be the perfect hangout next weekend.

For more on arcades in Singapore, read: 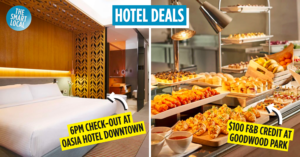 10 Atas Staycation Packages With Free Breakfast, Late Check-Out, And Over $100 F&B Credits
10 Hotel Staycations With Next-Level Bathtubs From $150/Night To Soak The Stress Away 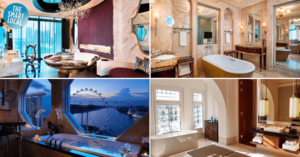