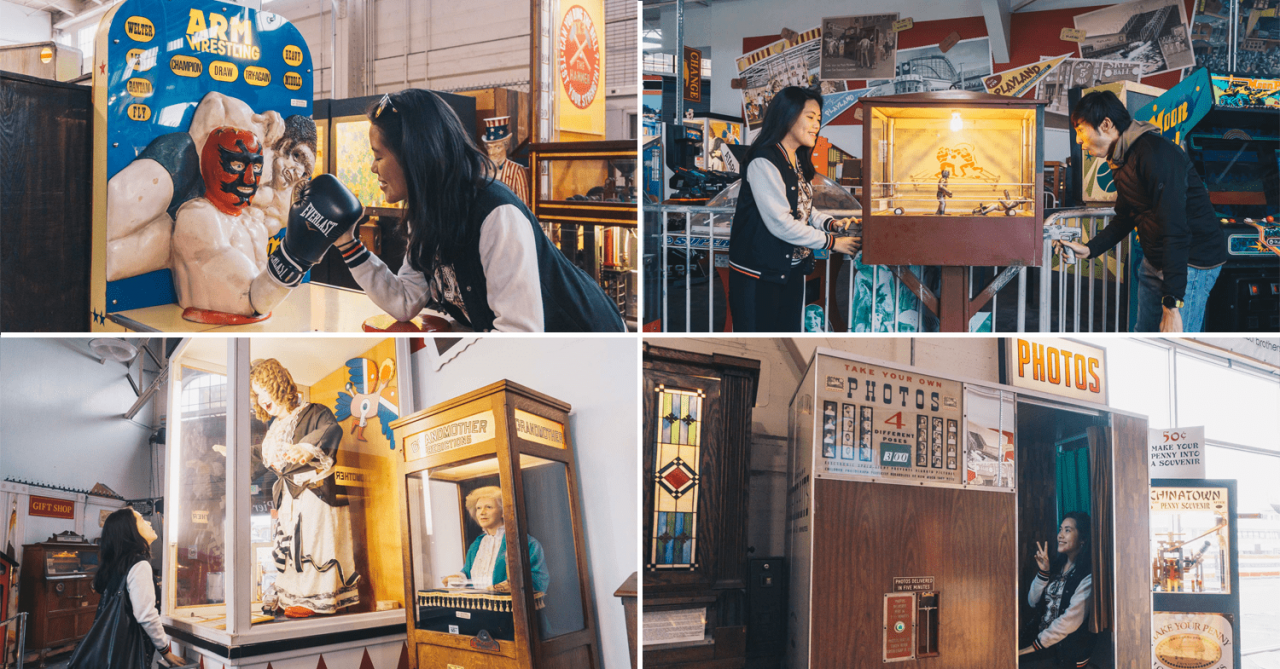 San Francisco’s Antique Penny Arcade – also known as Musee Mecanique or The Mechanical Museum – is a quirky spot operating under such a unique premise, you’d be hard-pressed to find anything like it in Singapore.

With arcade games both old-school and modern, carnival setups like photo booths, fortune-telling machines and illusion mirrors, plus a slew of antique entertainment systems older than your grandparents, it’s pretty much a museum/play zone/nostalgia-inducing gallery hybrid.

We navigate the vast establishment to bring you the highlights. Pssst…admission is free and games cost as little as USD$0.25 (~SGD$0.34) per play!

Our Little Red Dot is dotted with arcades, and we’re so enamoured with them that there’s entire bars – both retro and modern – styled after them. 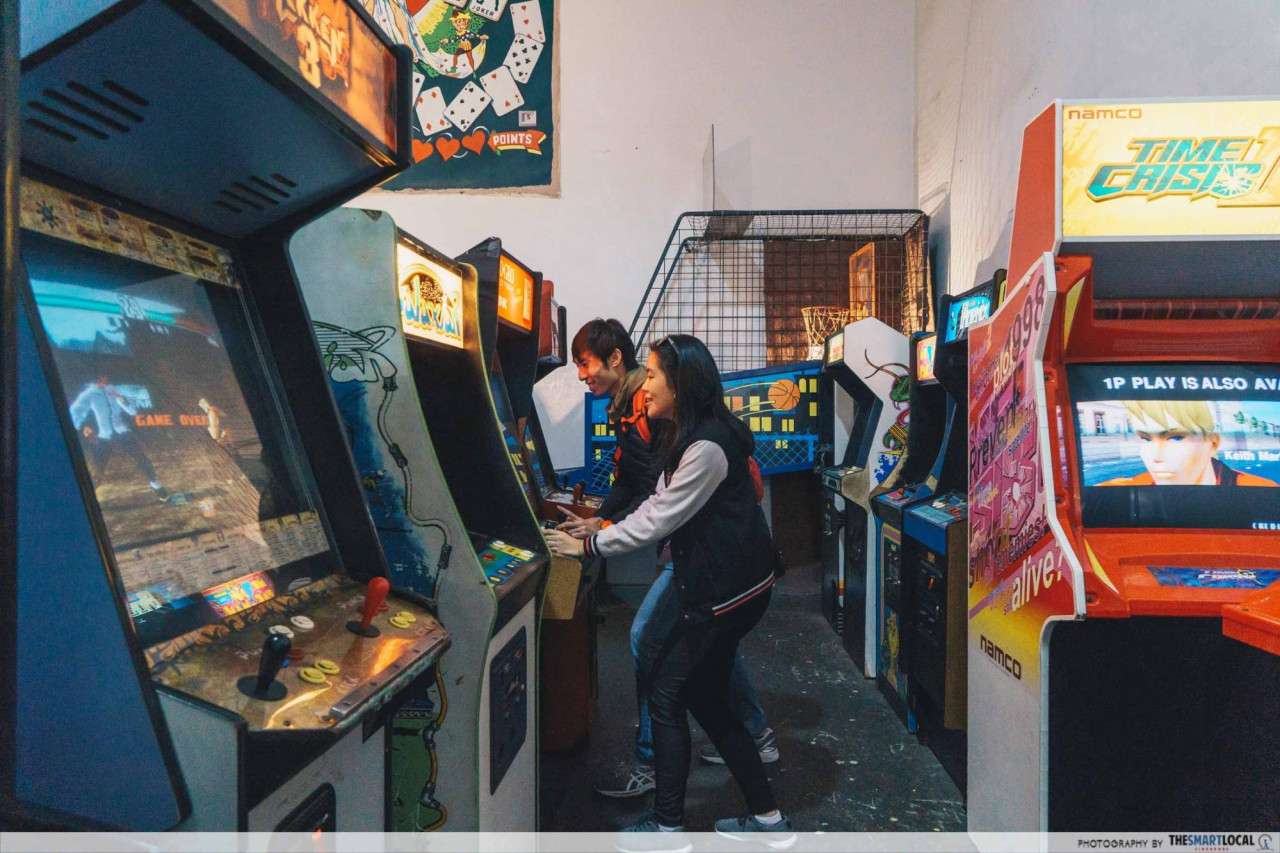 Delve into the rich history of gaming and try your hand at old-school arcade staples. It’s super cool to recognise what game concepts have existed since eons ago, and have gone through major upgrades to become what they are today. 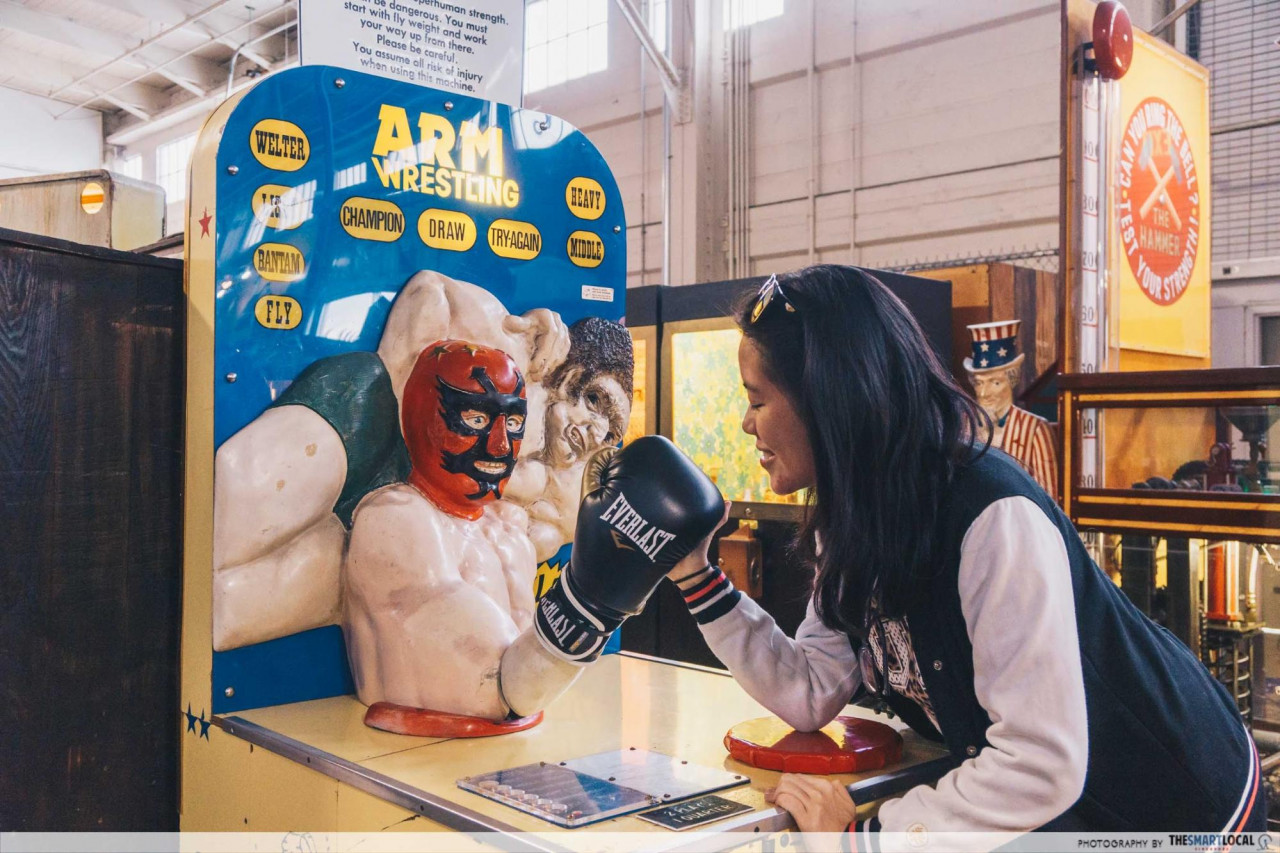 Fans of Princess Diaries would recognise this Arm Wrestling machine played by the Queen Of Genovia herself – aka Julie Andrews. 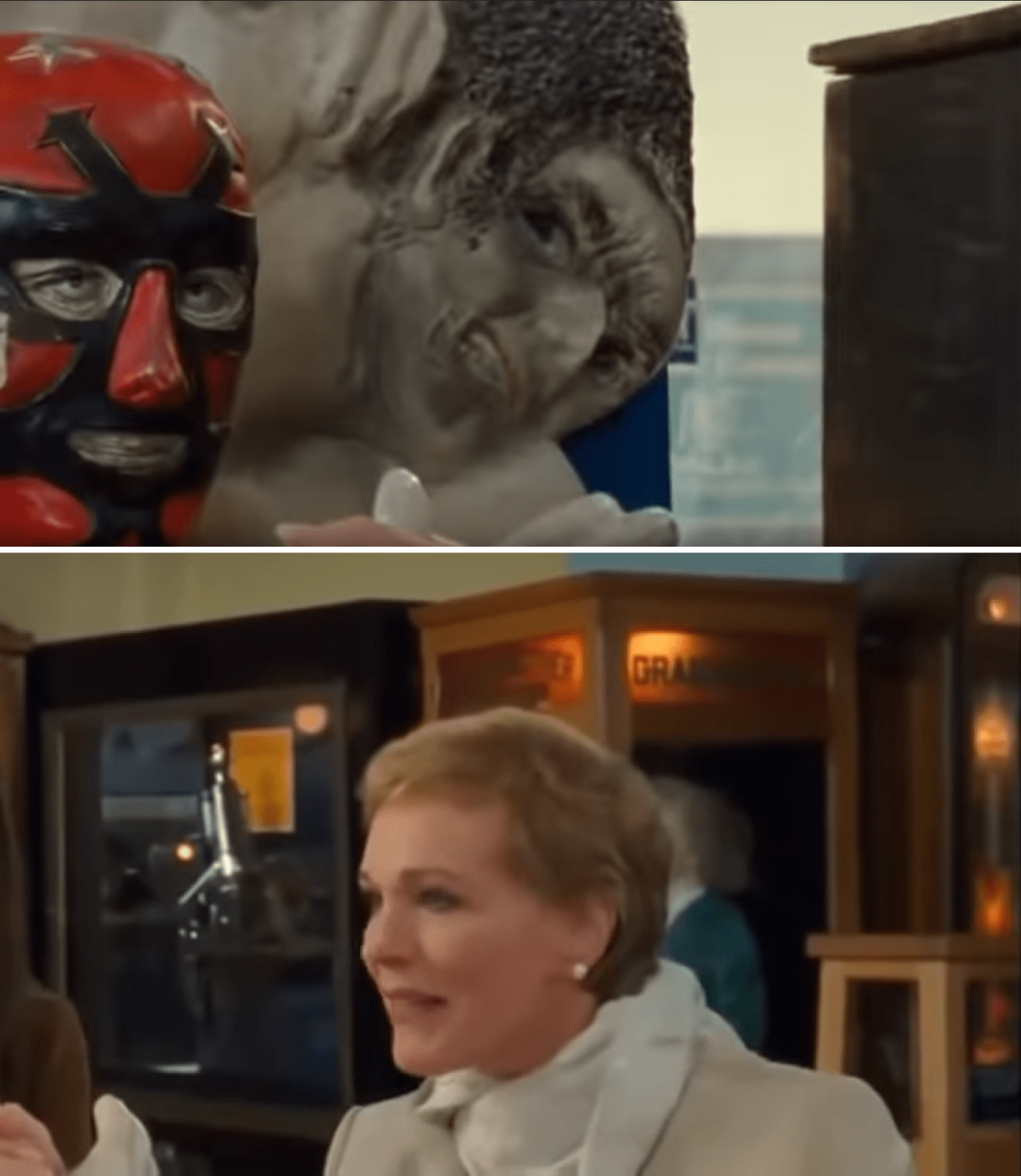 Images adapted from The Princess Diaries (2001)

They actually filmed the entire scene right at the Antique Penny Arcade! 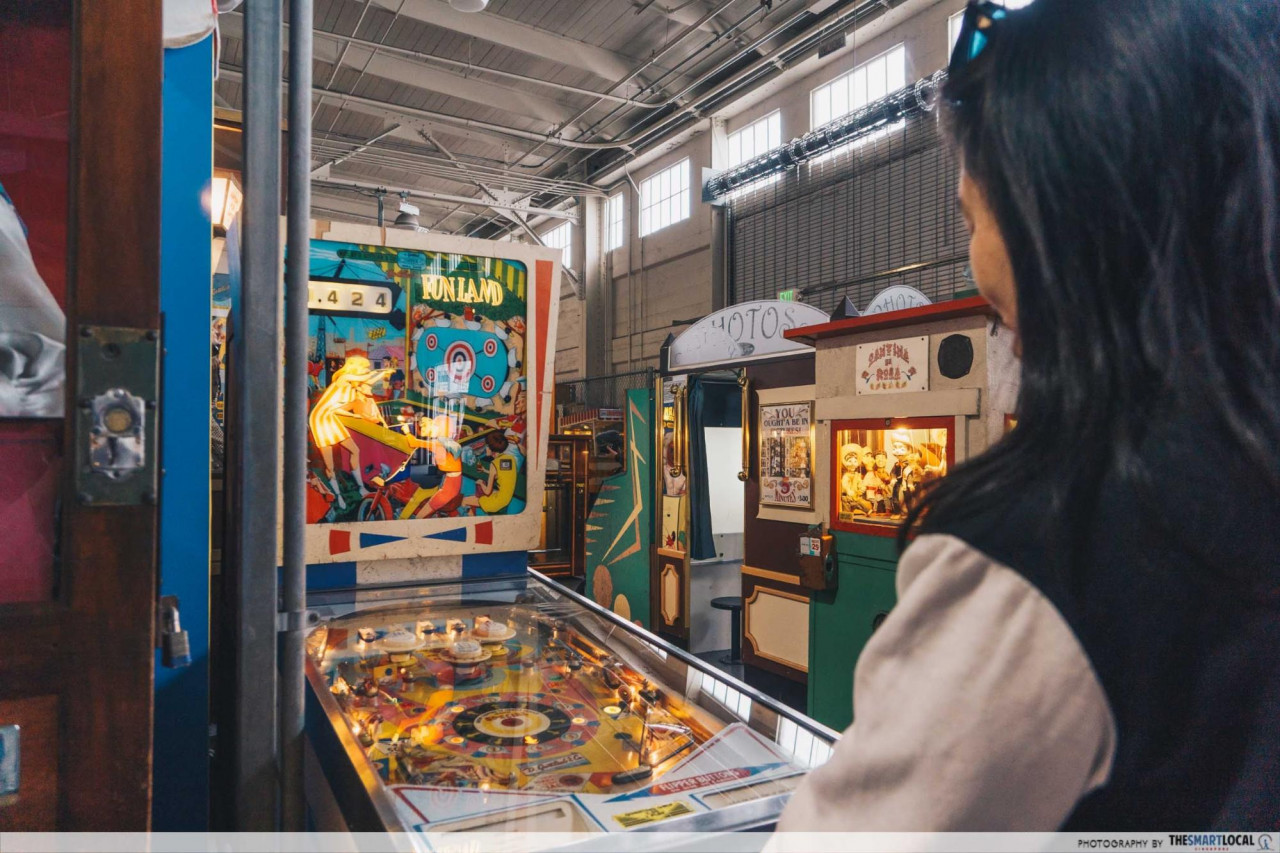 Traditional pinball machines, way ahead of the iconic 3D Pinball Space Cadet digital version we all became addicted to in the early 2000s. 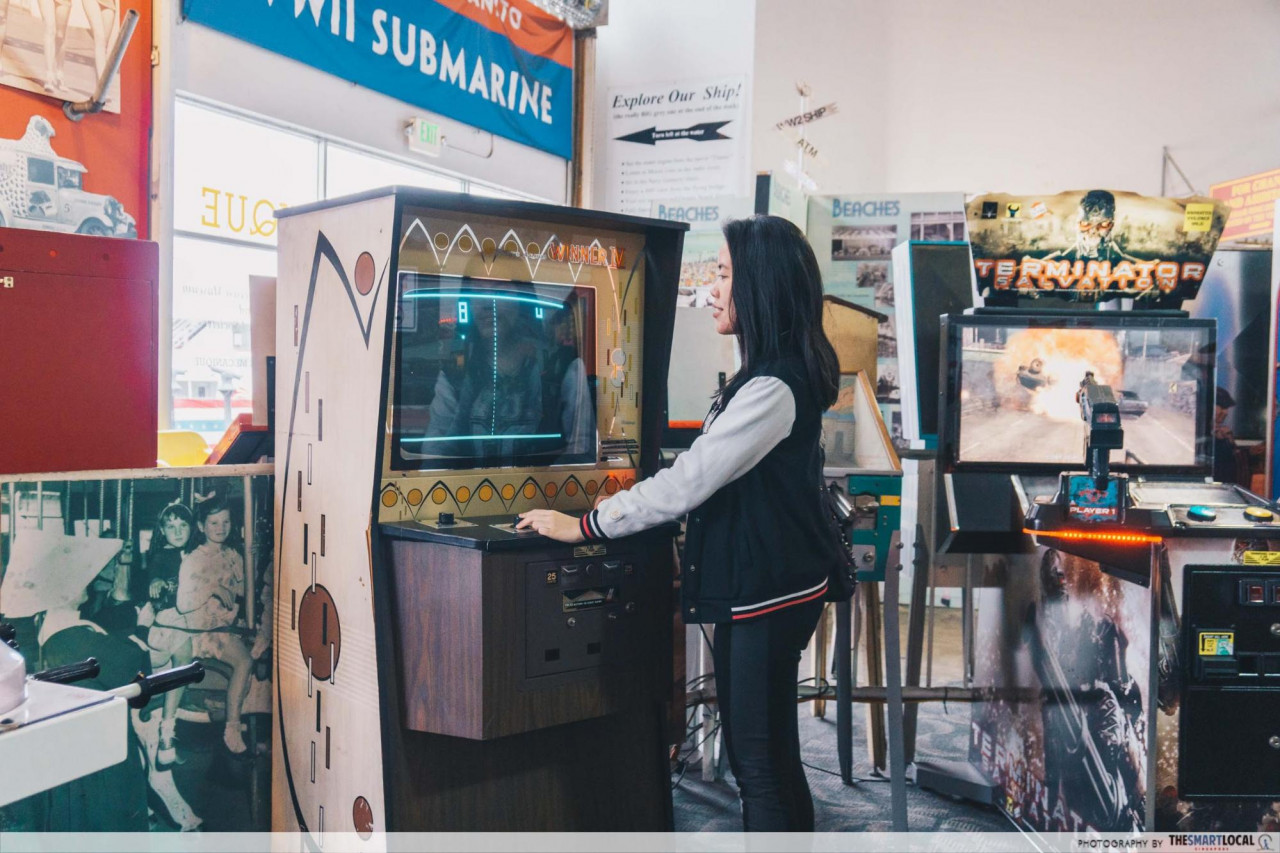 A super basic rendition of the Digital Table Tennis game, next to a more souped-up version of a Terminator Salvation shooter. It’s like witnessing the evolution of arcade gaming side by side! 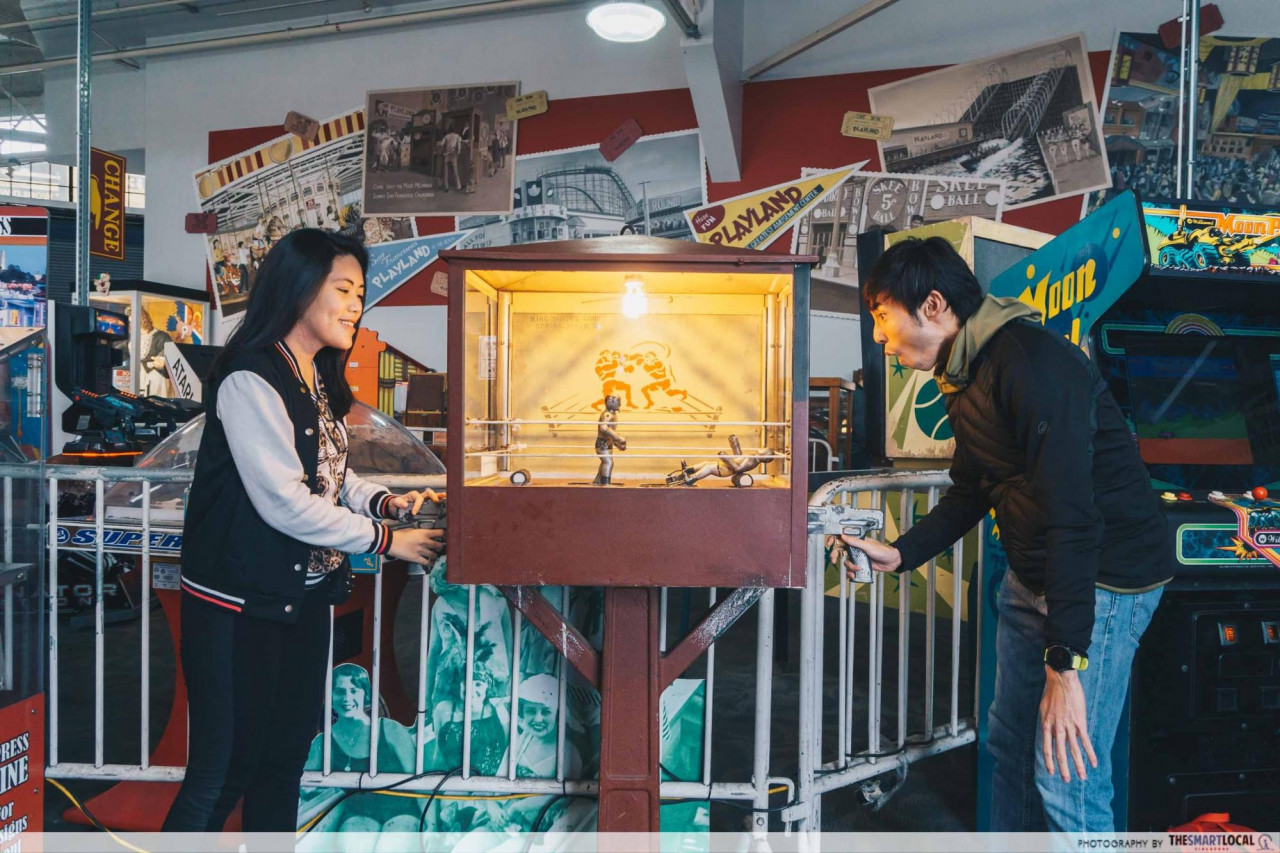 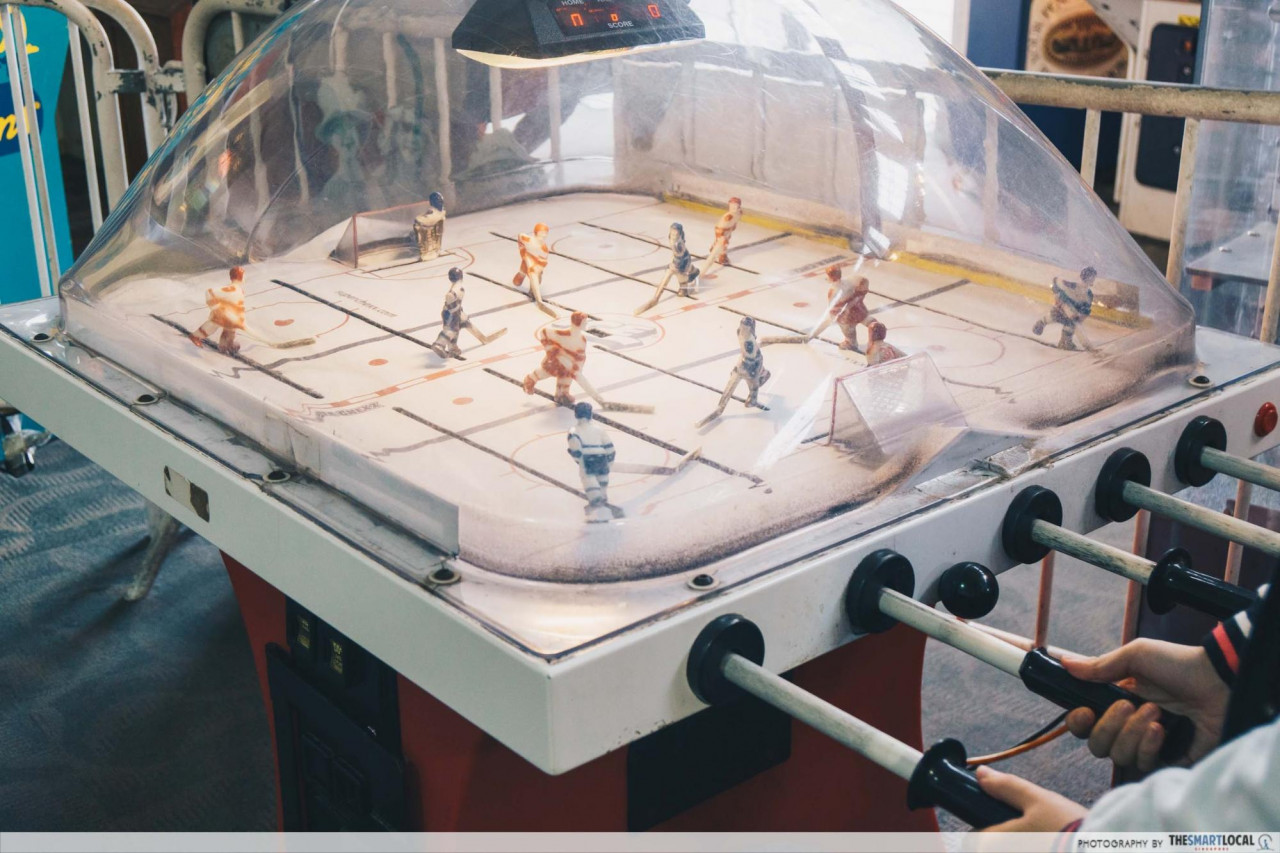 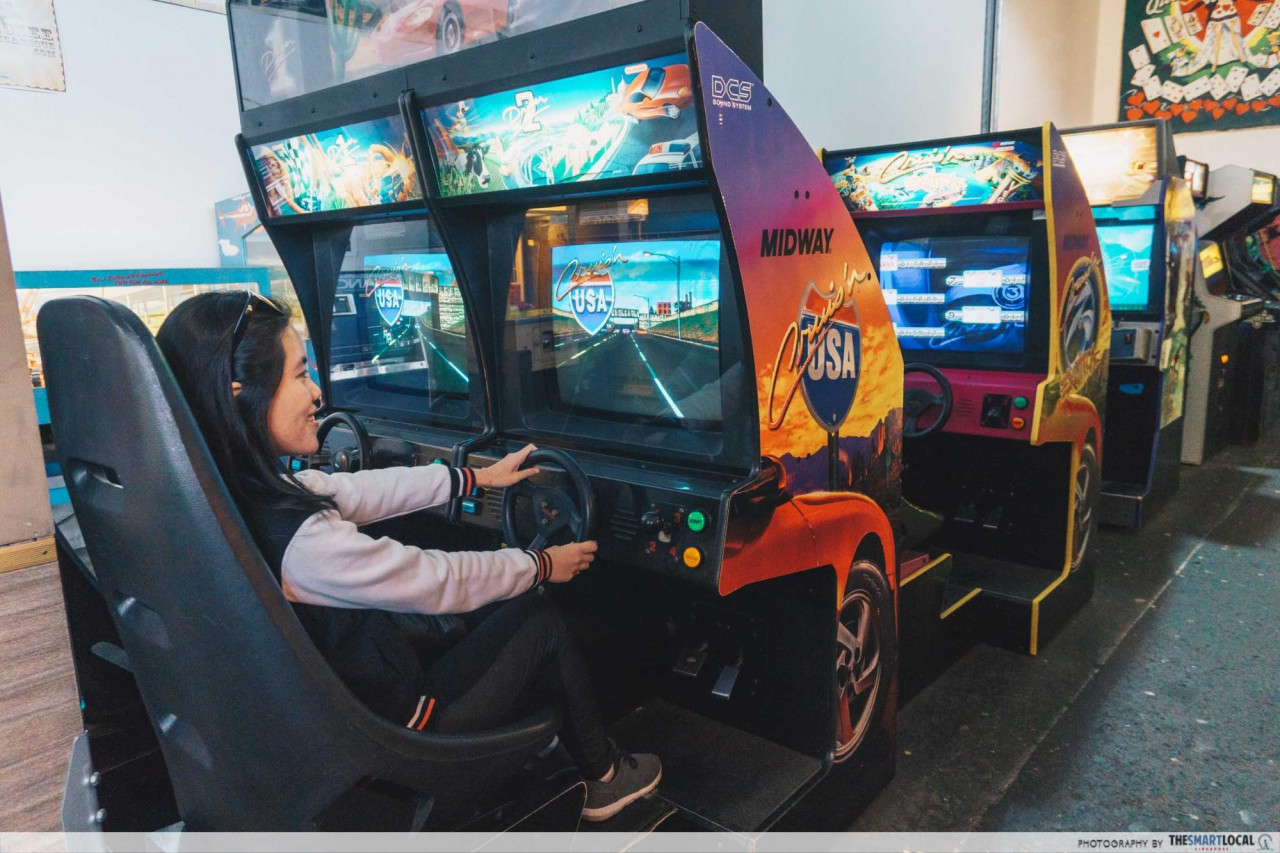 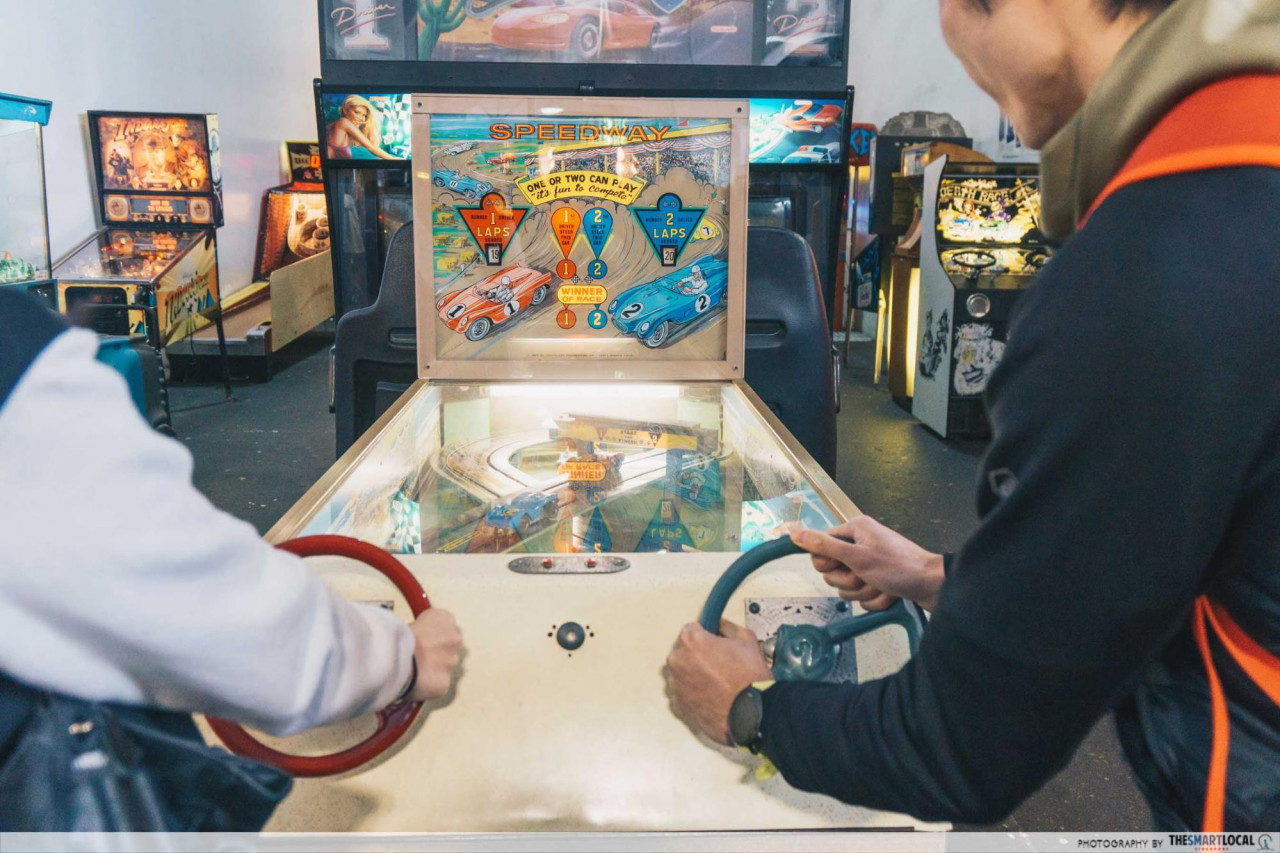 Racing games: Then vs now 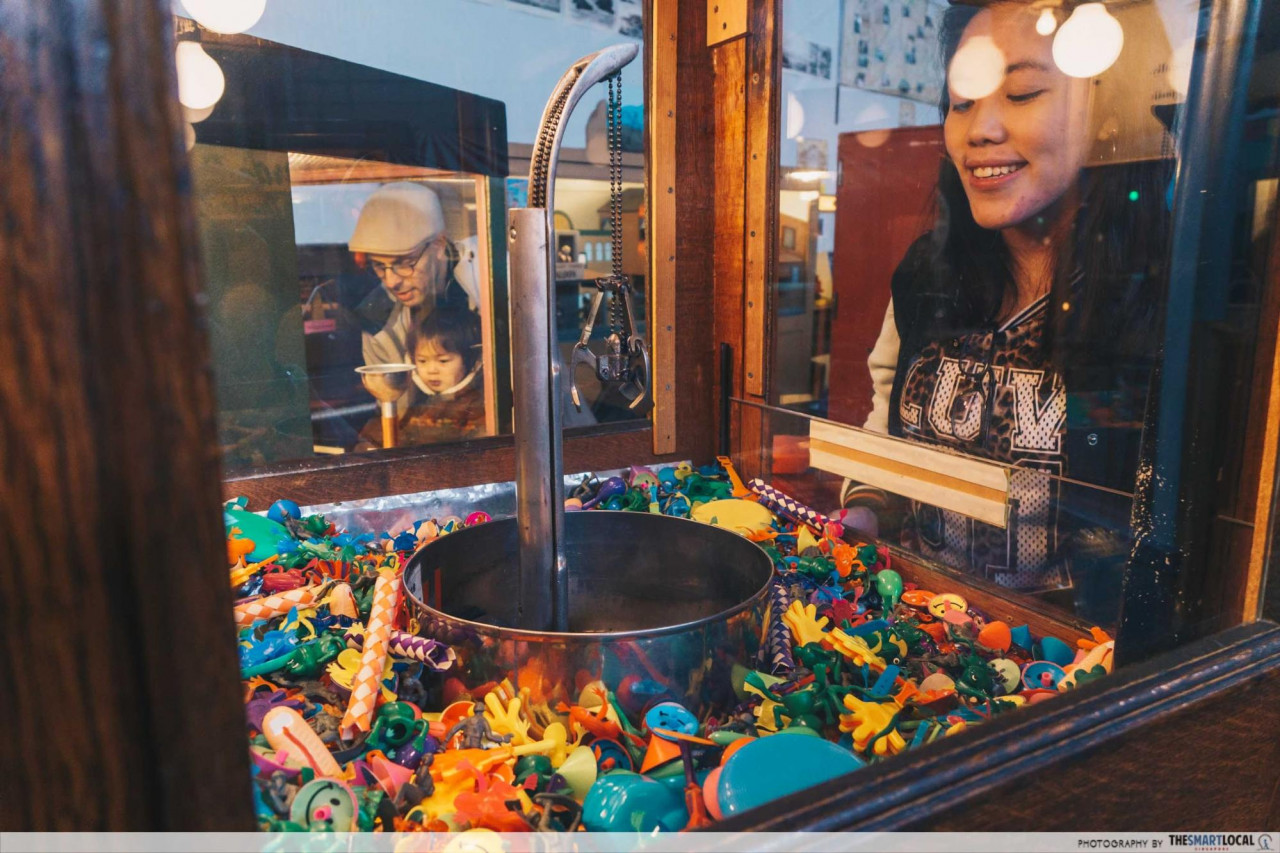 Traditional crane games were so quaint, from the simple plastic prizes to the metal chain contraption used to “kiap” things up. 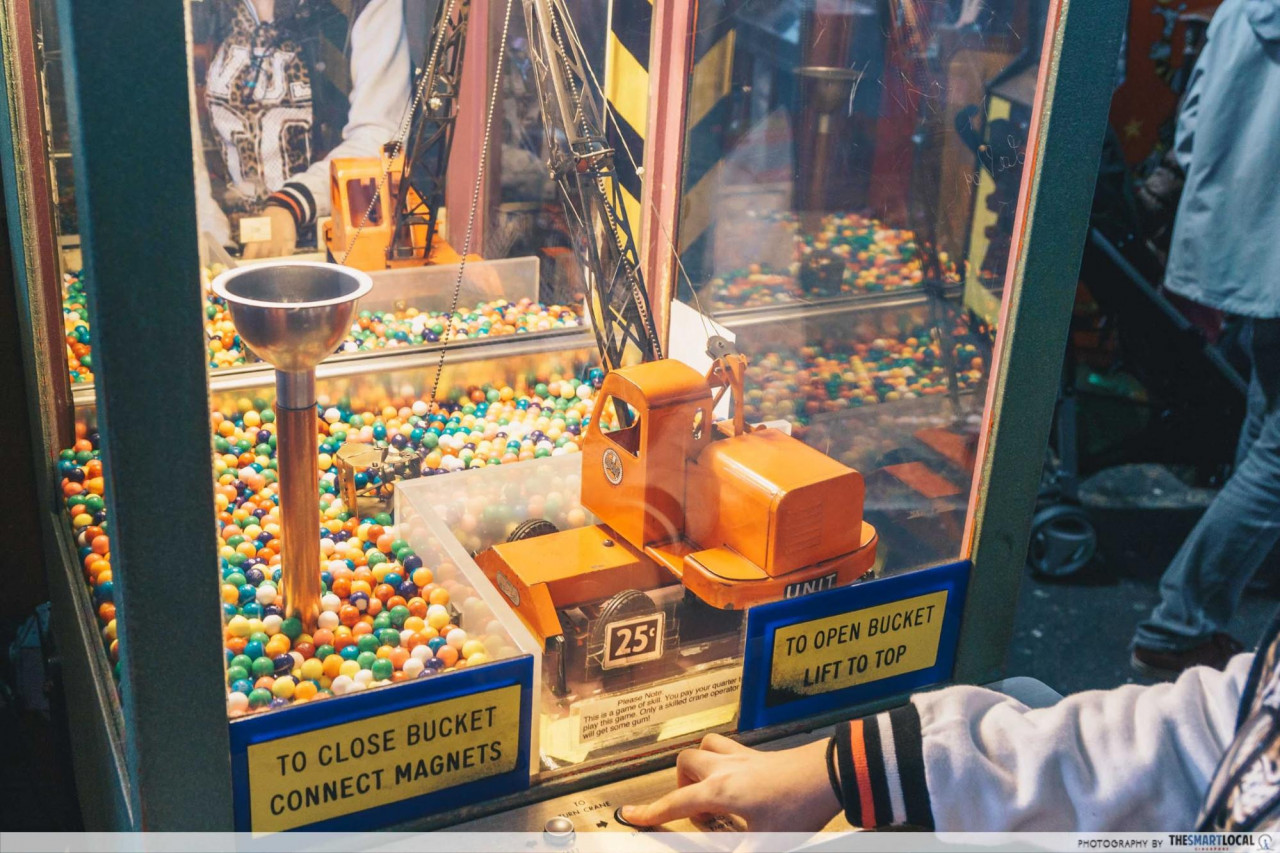 This is a candy machine equivalent complete with a tiny crane!

Falling more under the museum factor are exhibits showcasing what public entertainment options were like in the decades gone by.

One observation we made is that entertainment in the olden days afforded to be more tongue-in-cheek, with “peep shows” tempting you with images of belly dancers, mermaids and the like. 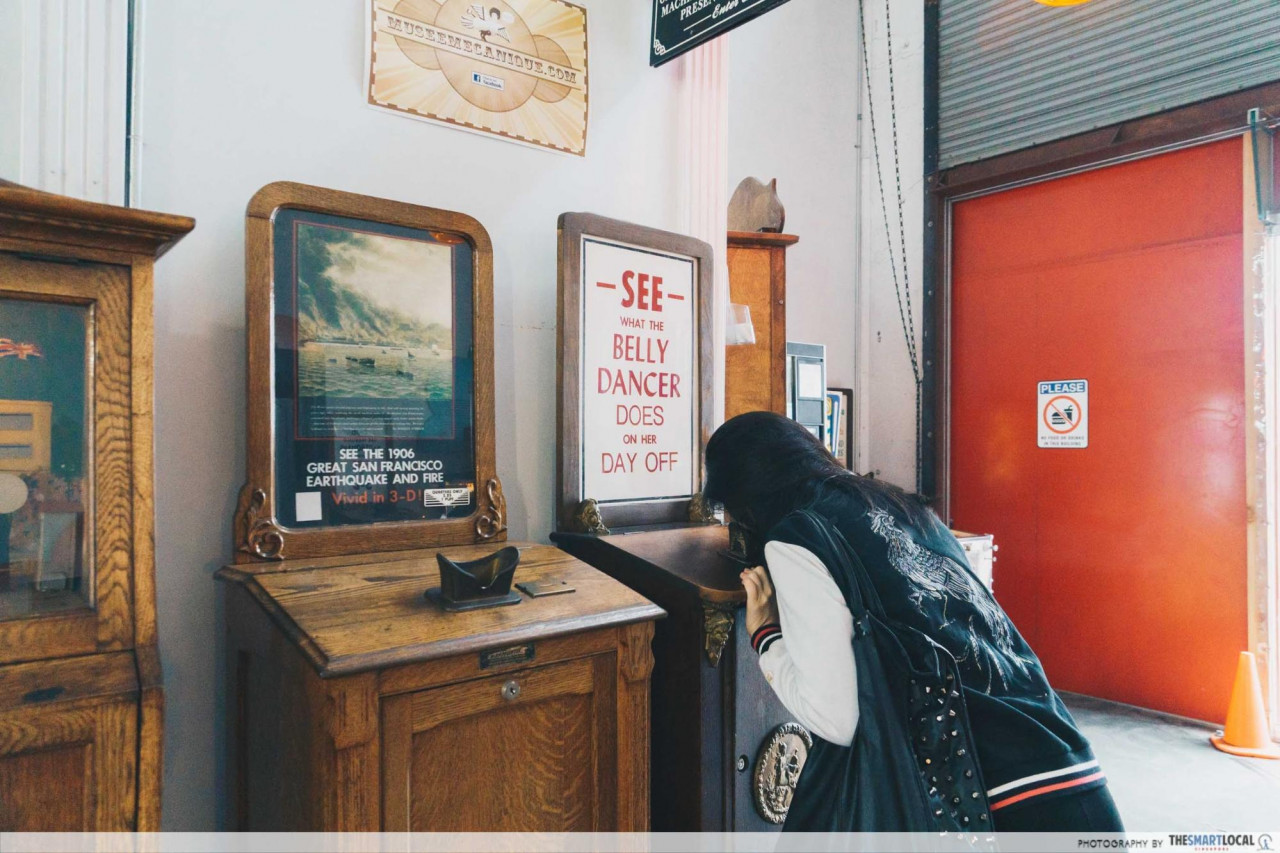 These interesting viewing machines will play a short performance act for you when you peer into the viewfinder. 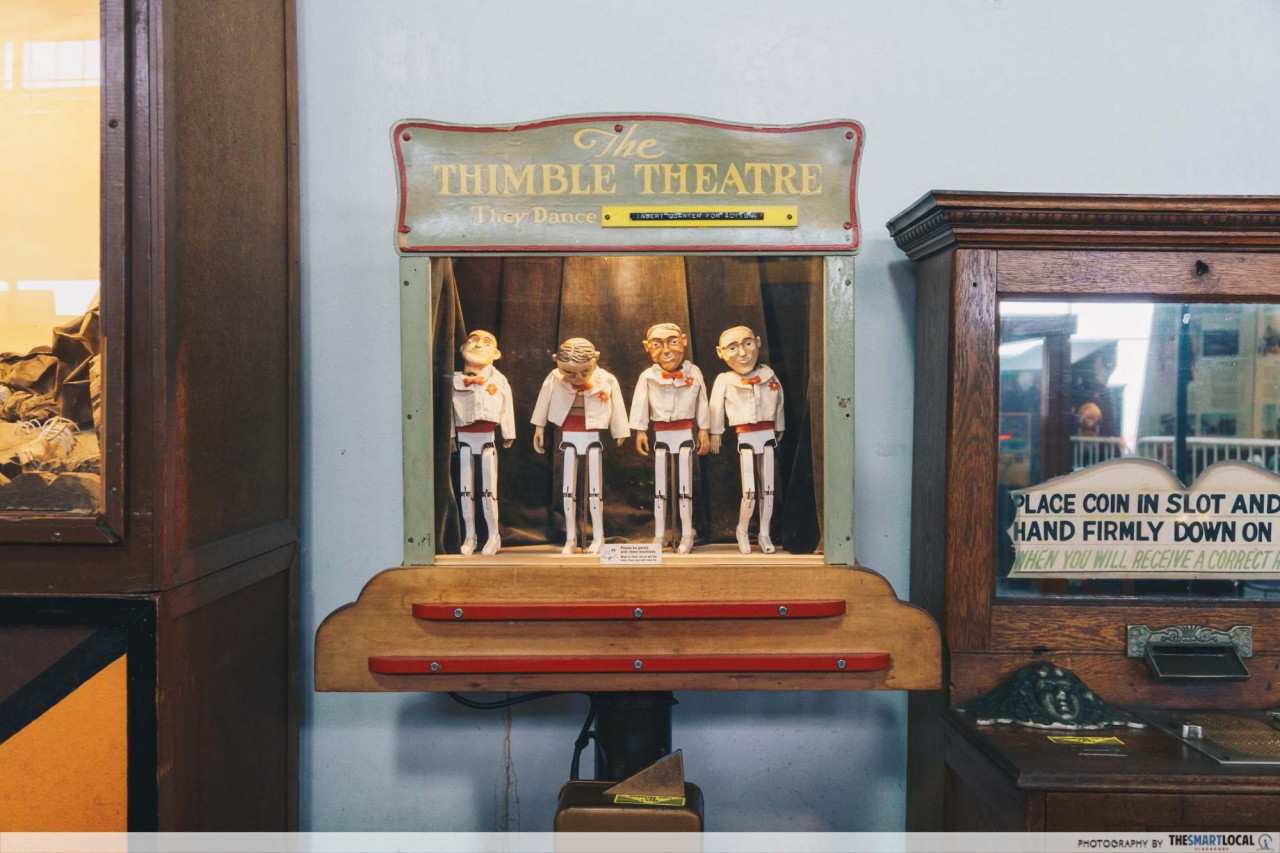 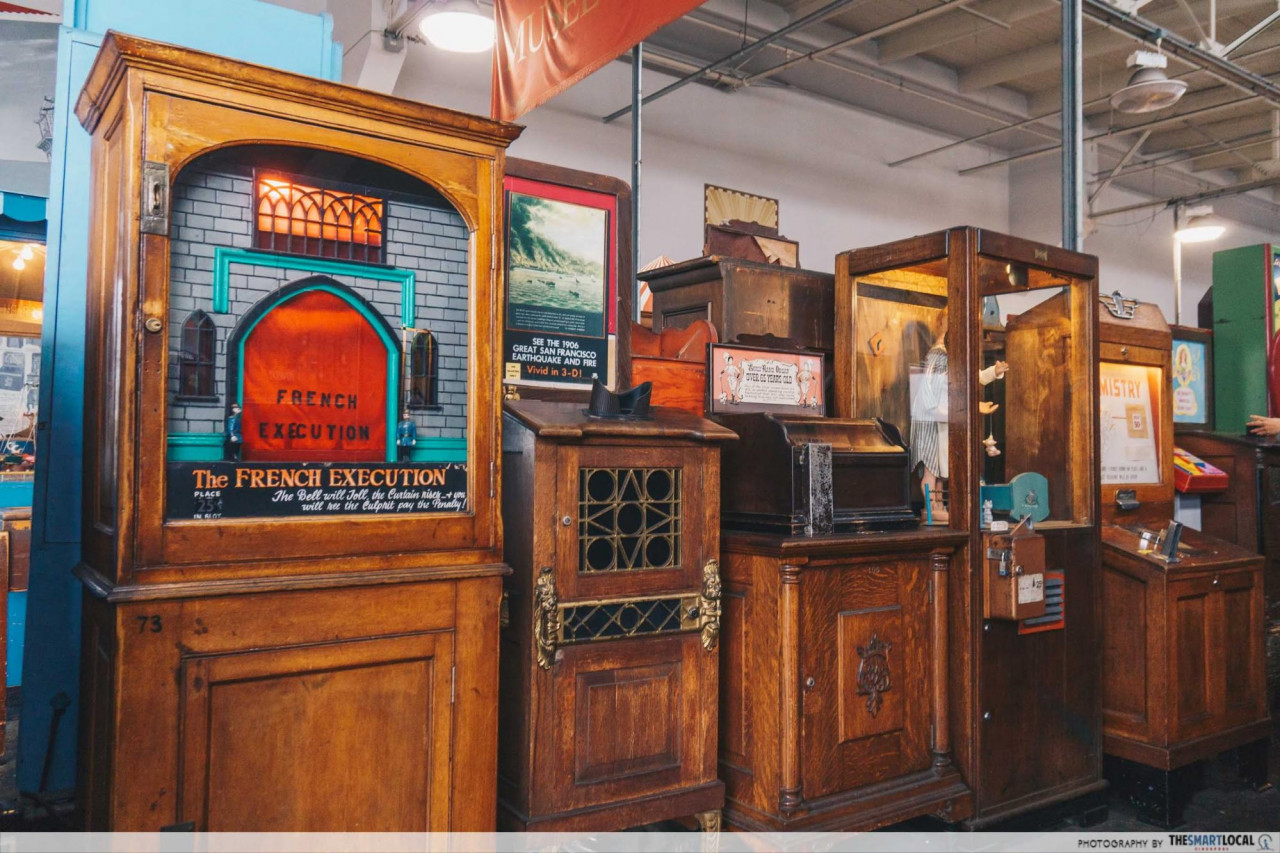 Some of the shows are based on alarmingly controversial themes such as opium dens and executions. Certainly wouldn’t make it past modern media advisory guidelines! 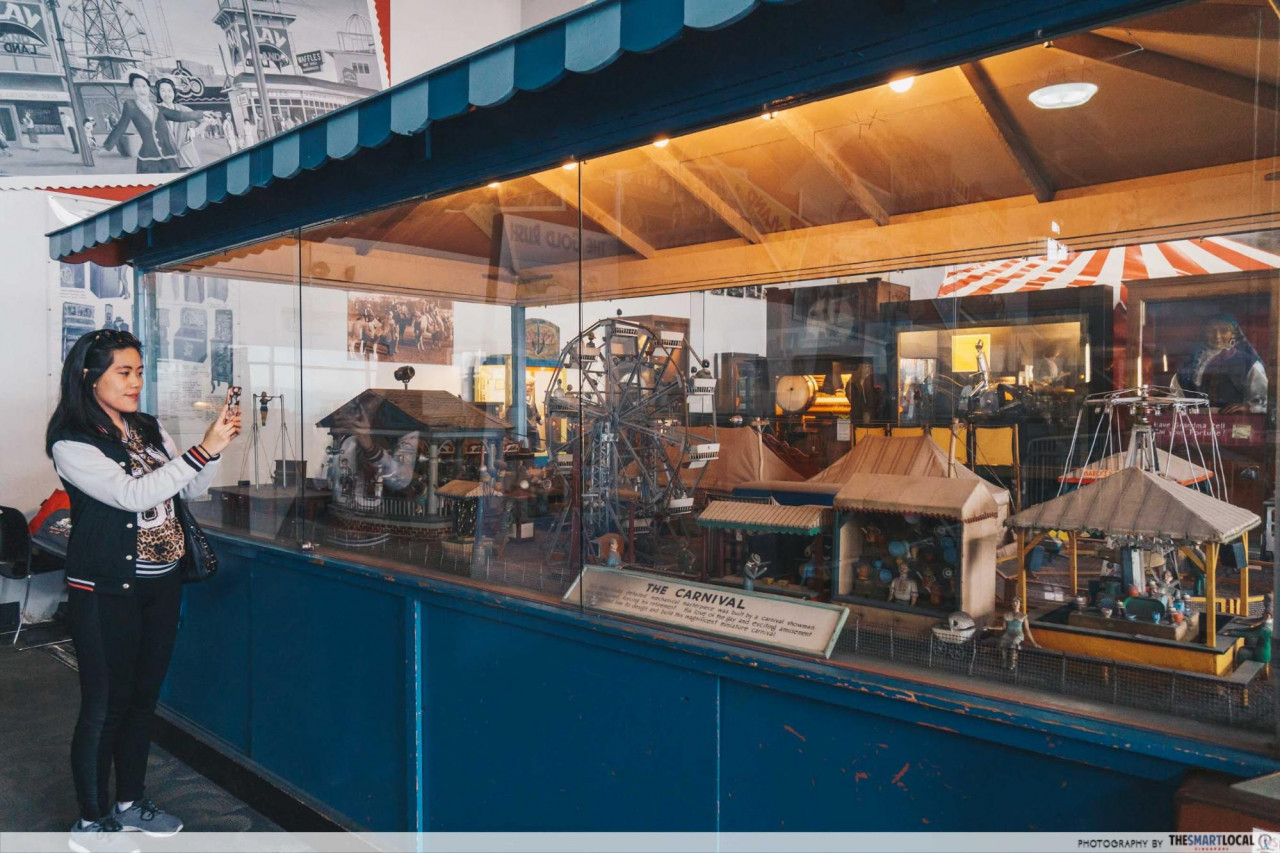 A mammoth setup of an entire carnival in miniature toy form.

One thing’s for sure, some of the traditional statues and lifelike models can be a tad freaky. 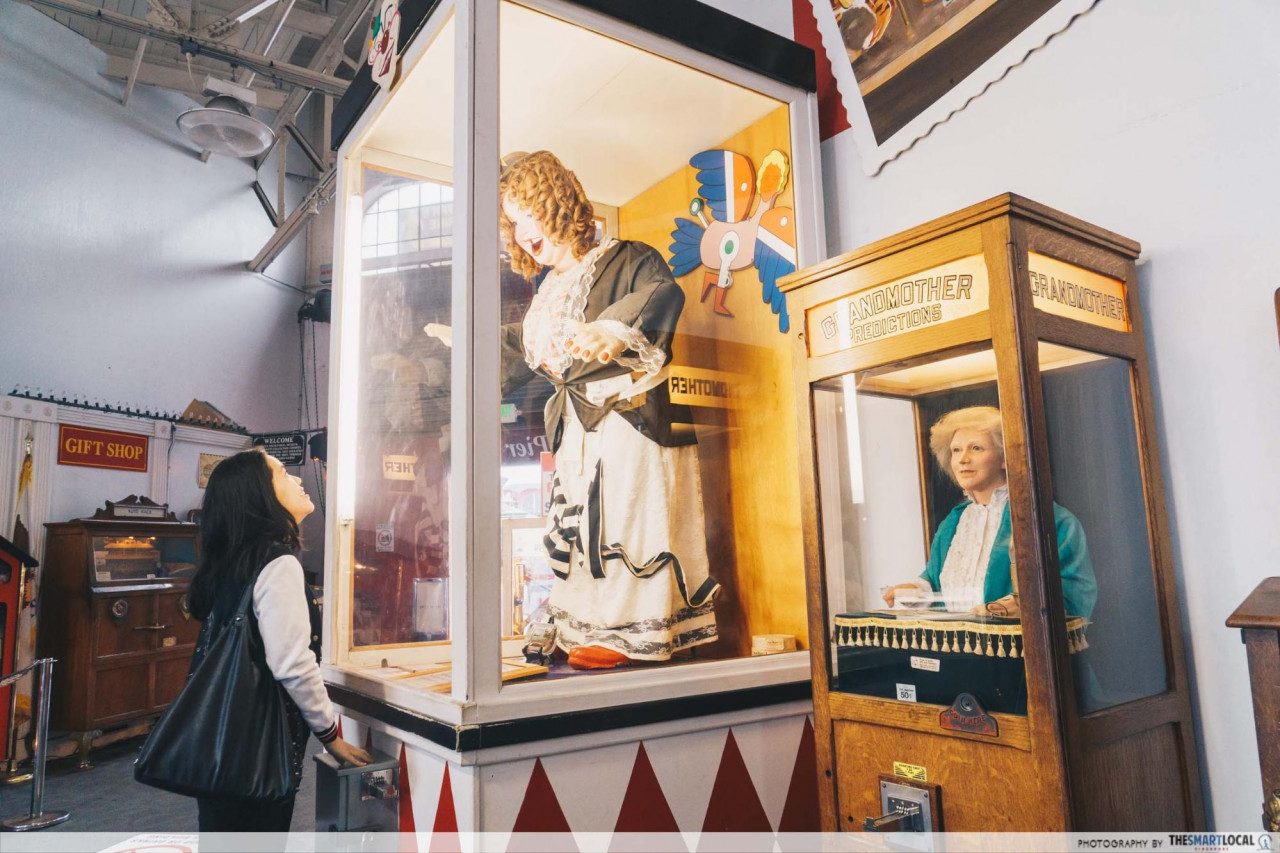 This signature “Laughing Sal” exhibit emits a booming laughter when played, which I personally find to spark more terror than joy.

There are a tonne of fortune-telling machines throughout the Antique Penny Arcade, promising to deduce everything from your love life to how the new year will unfold. 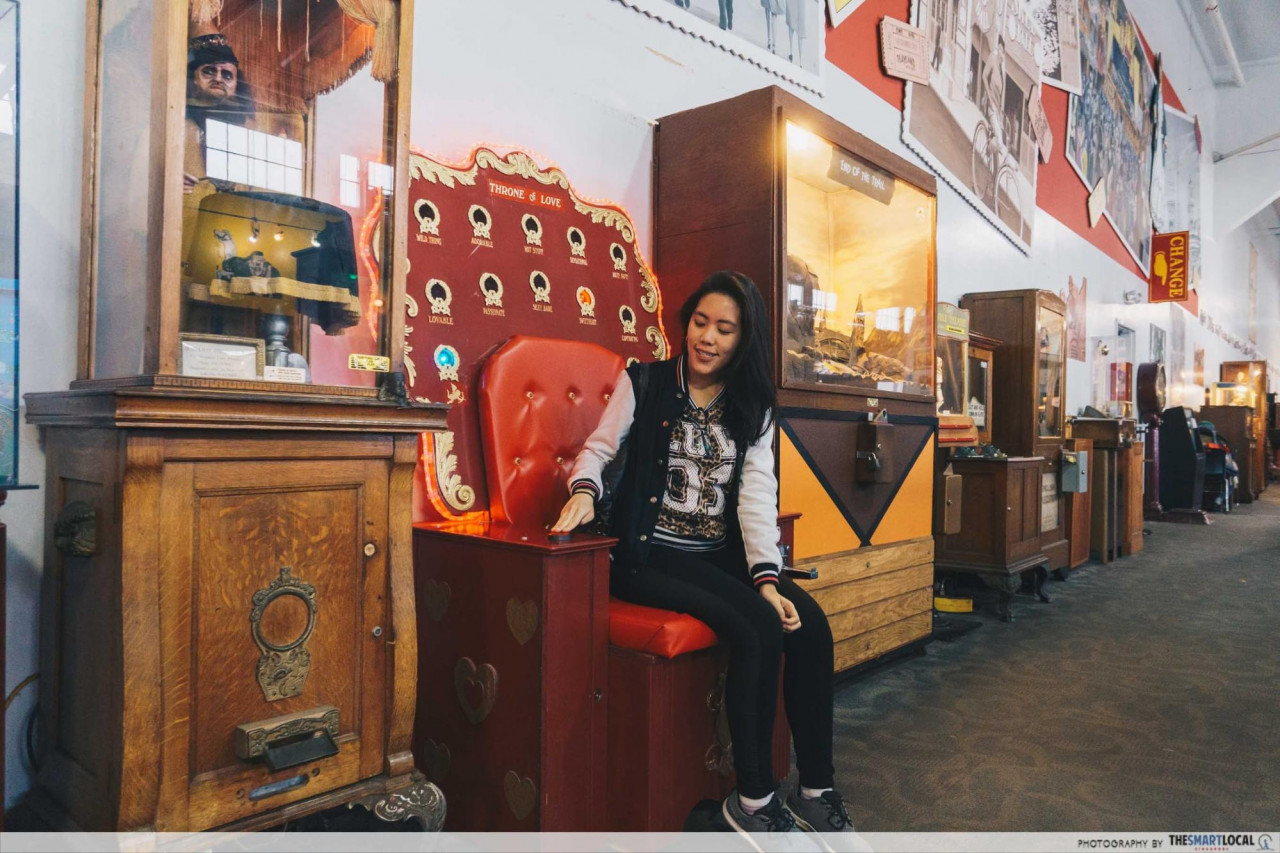 While the tellings may not be rooted in science, the ensuing giggles make it worth caving into suspense.

The Antique Penny Arcade also has an abundance of old-school activity staples like retro photo booths. Those who love basking in nostalgia will get a kick out of printing these charming sepia-toned photos to cherish forever. 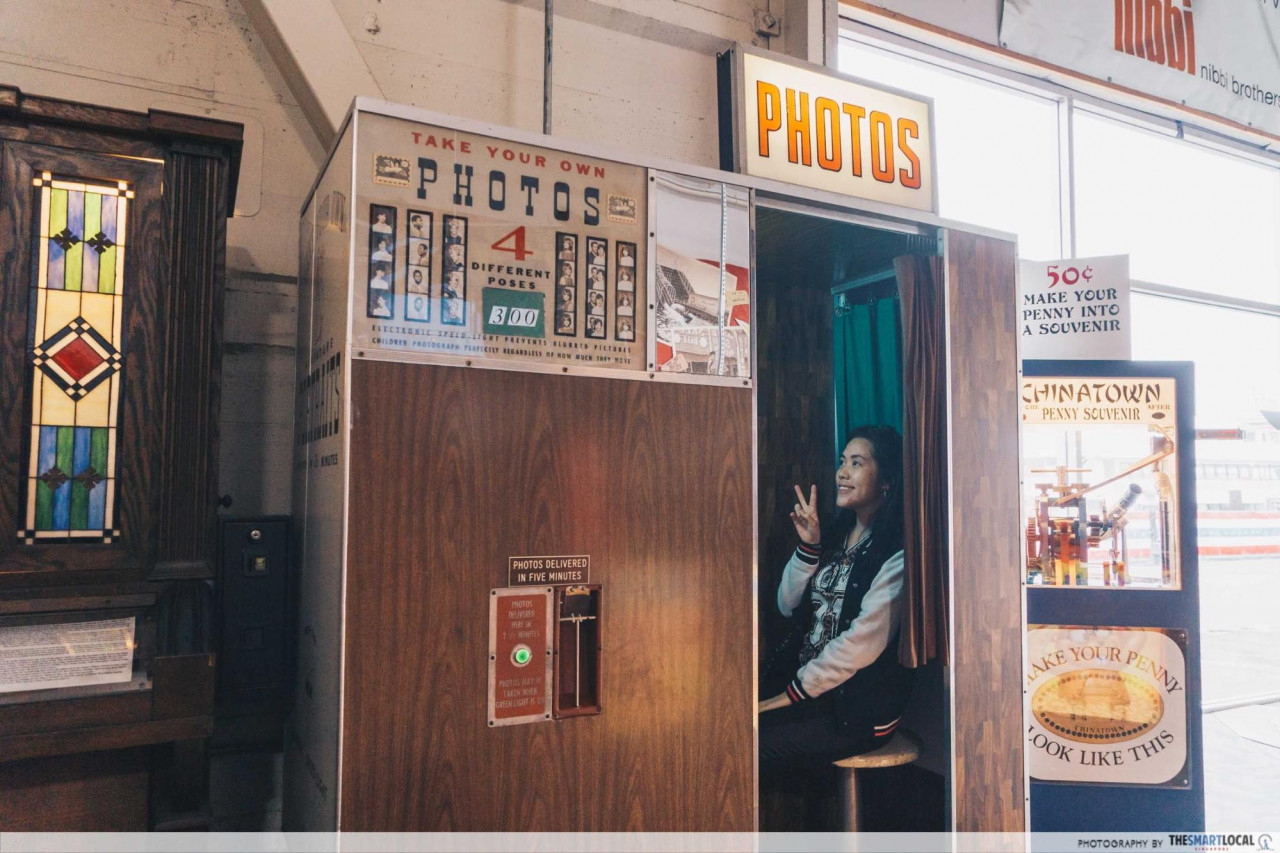 It only costs USD$3, which is about 4 Singapore dollars. There are at least 3 different machines with varying print aesthetics for you to choose from. 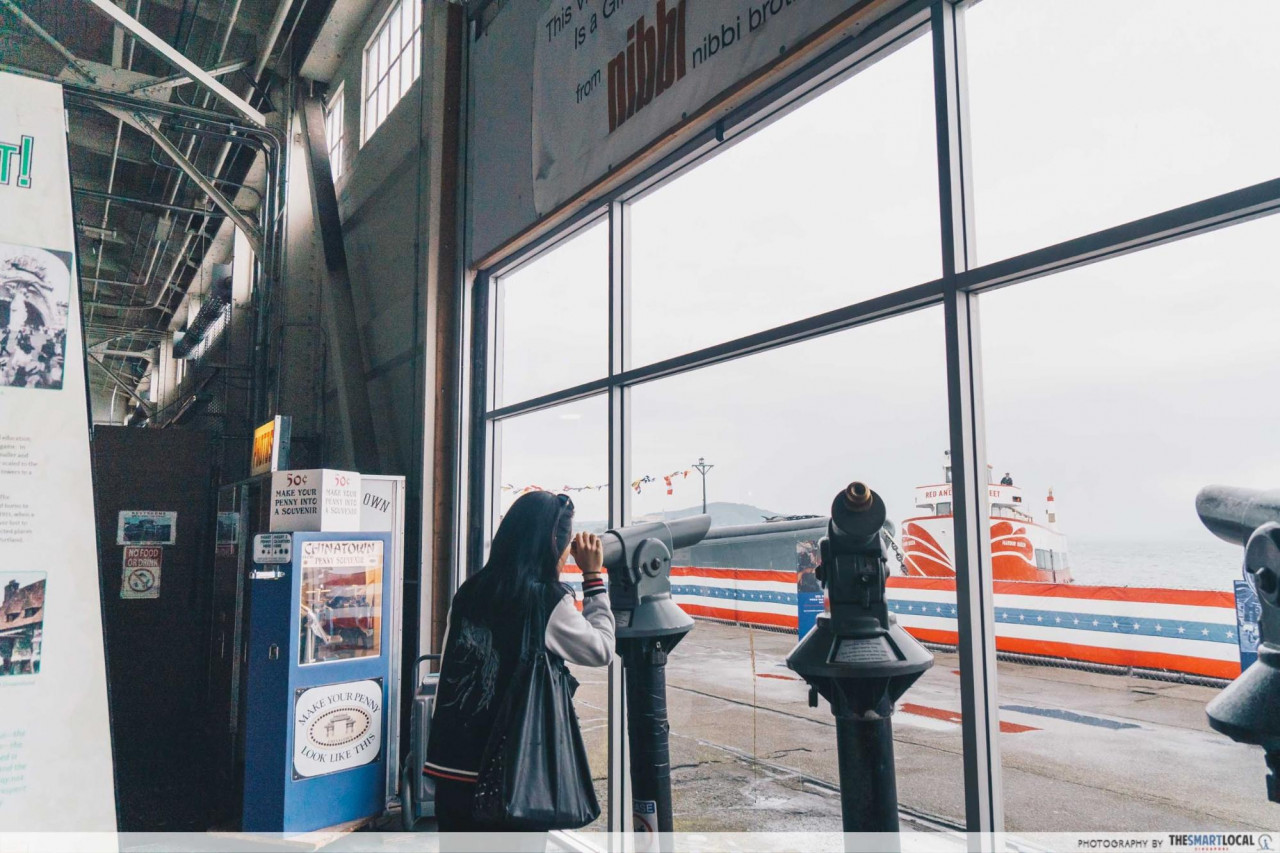 Located at Fisherman’s Wharf, the arcade is also installed with telescopic lookout points. Take a break in between games to appreciate the stellar seascape! 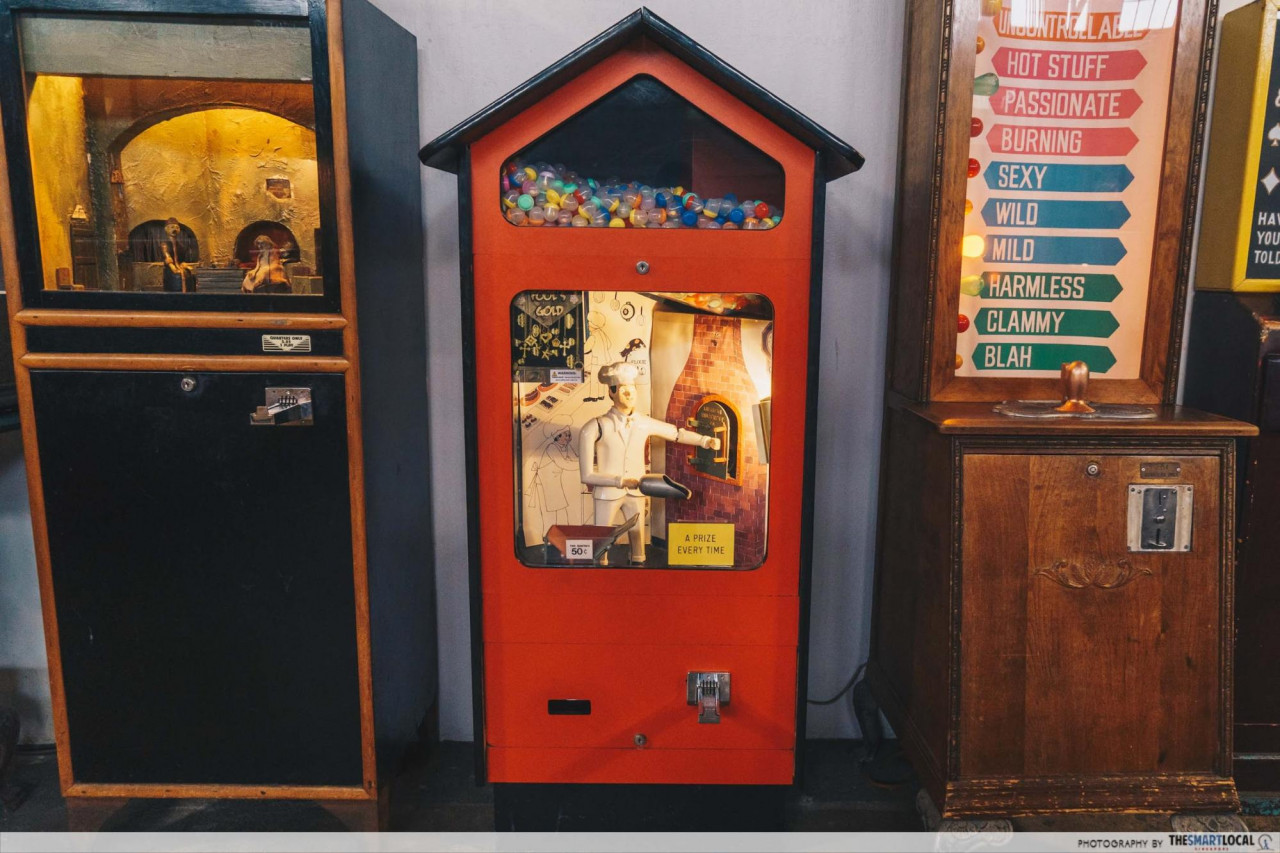 Cap off your trip by taking home a souvenir from one of their many tikam machines. Our fave is this adorable Baker/Goldsmith game which opens up the oven to reveal a mystery accessory. 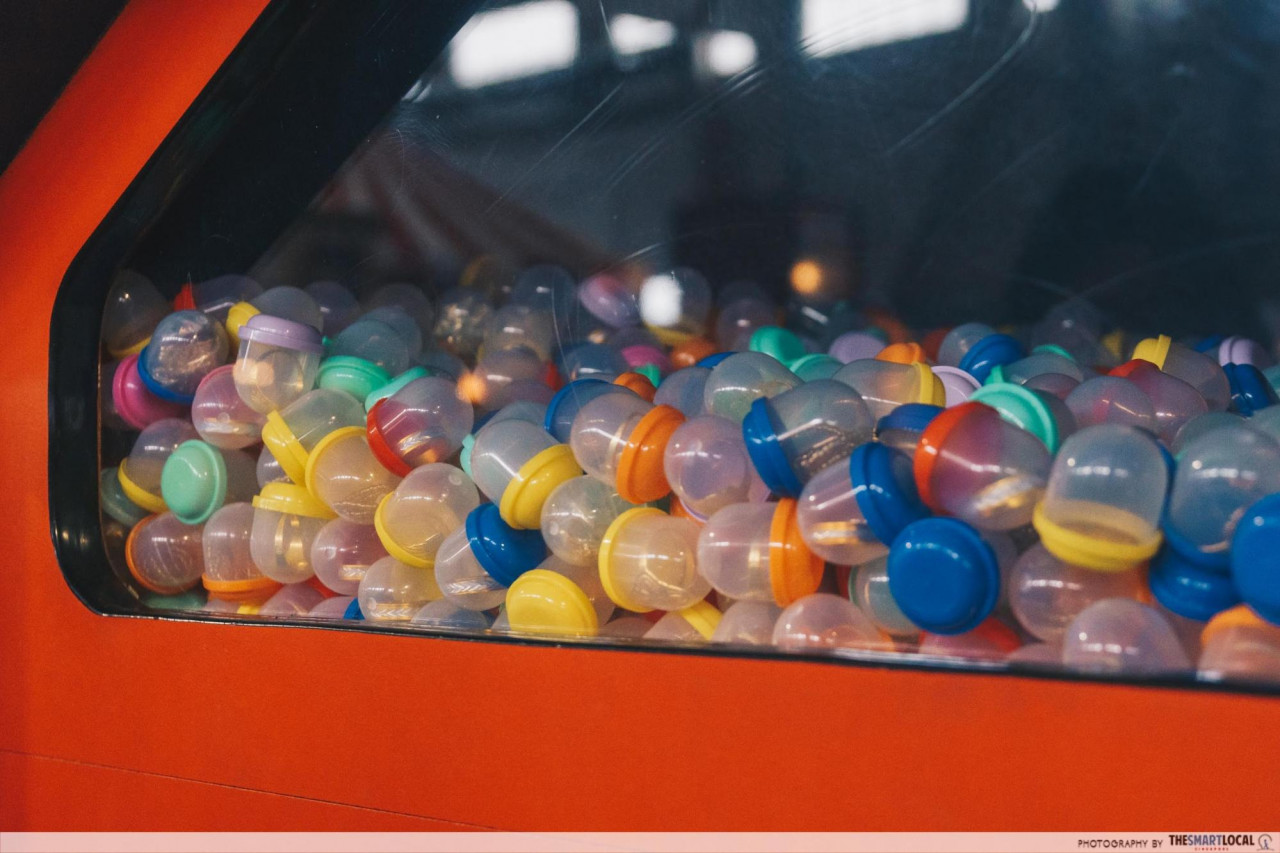 There are plastic rings and beaded bracelets of different designs. Nothing fancy, but the novelty and feelz factor is definitely there!

The charm of the Antique Penny Arcade lies in that there’s something to appeal to guests of any age. 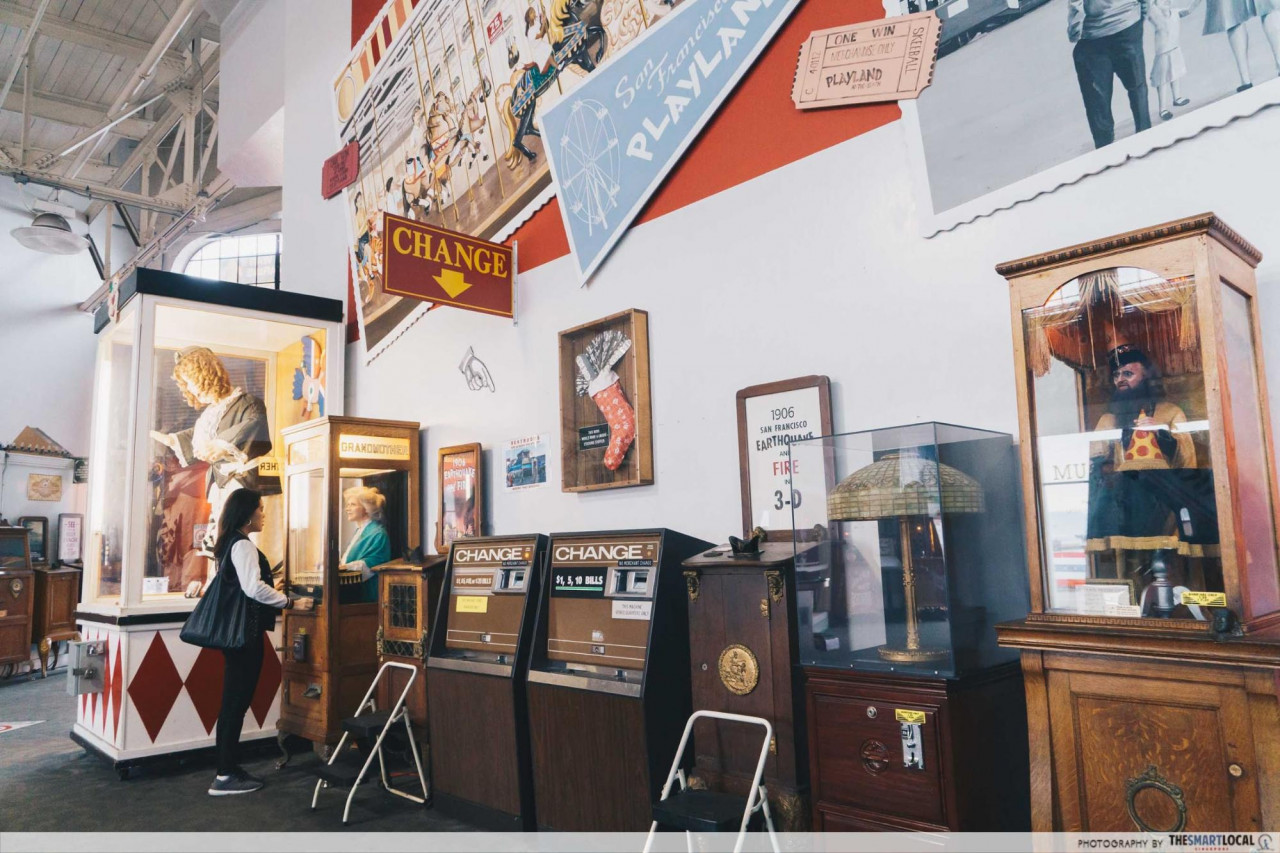 The games and entertainment setups span generations, striking a chord with senior folk who probably haven’t seen these machines in decades. At the same time, it serves as a fascinating glimpse into the past for the younger crowd. 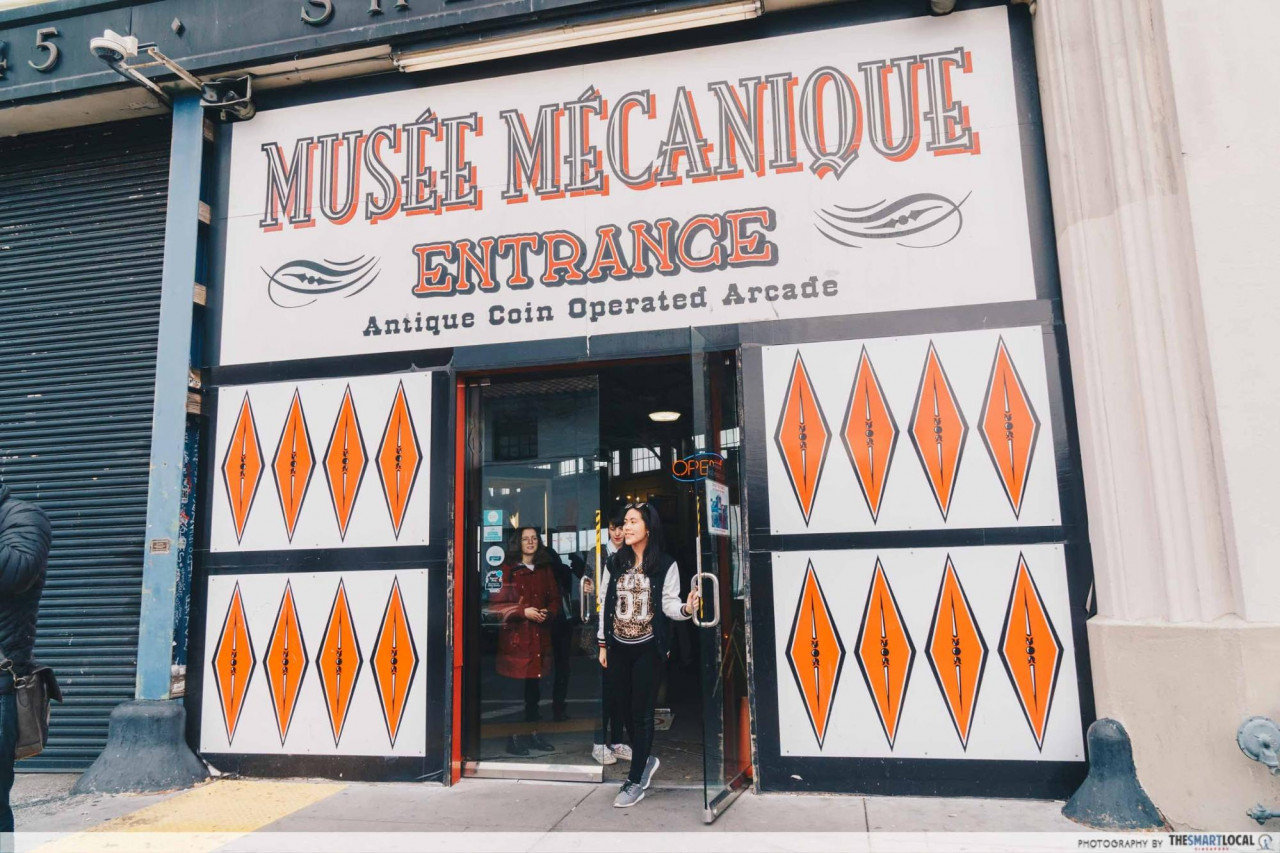 Situated within Fisherman’s Wharf – one of San Francisco’s must-visits – it’s the ideal hangout spot in between sightseeing and chowing down on fresh seafood.

Tip: We recommend heading there bright and early in the morning when it first opens, there’s nary a soul in sight and you’ll get to enjoy whatever machine you want, with zero waiting time.

Check out our other guides to activities in USA: 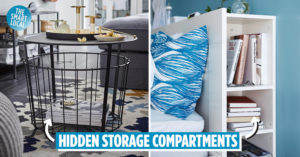 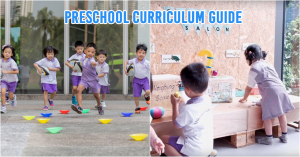