Throw a stone into a crowd and you’ll probably hit someone that can recite the storyline of Beauty and the Beast, or belt out A Whole New World without referring to lyrics.com. Young or old, Disney films hold a special place in many of our hearts and this year, it’s time to take out the candles as they turn a hundred years old.

From now till 9th April 2023, you can immerse yourself in lots of Disney-themed photo ops and performances at Jewel Changi Airport – most of these are free for all to enjoy. Snap photos with photo installations of movies like Up, Snow White and Dr Strange at the IG-ready spots below. 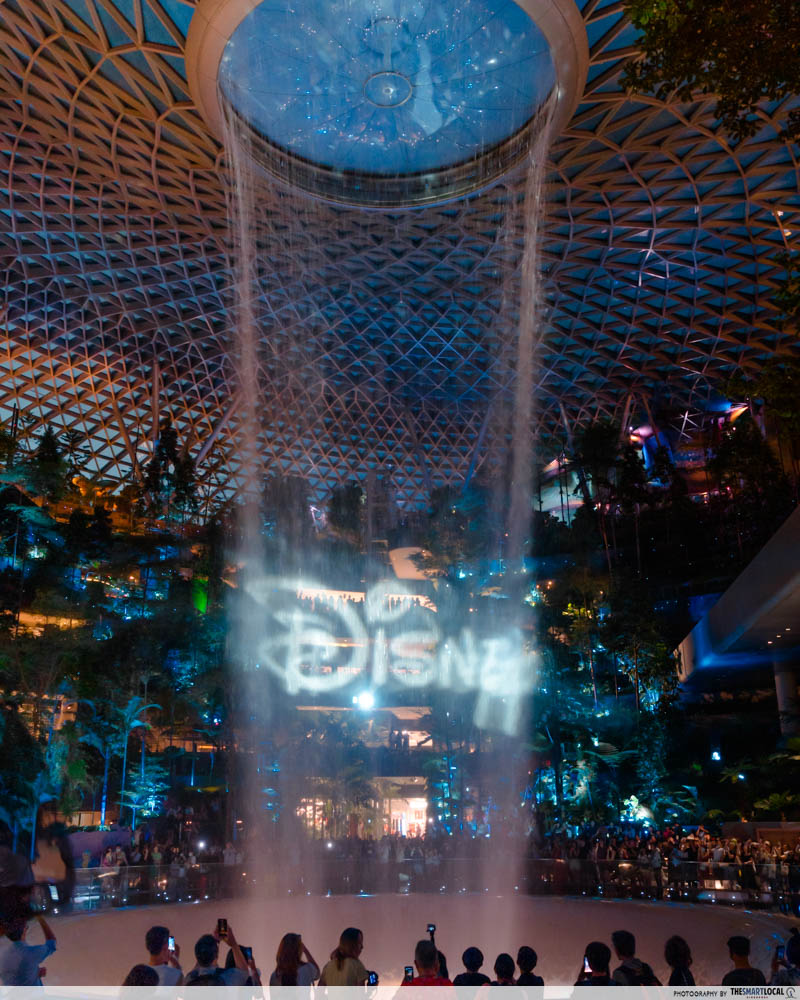 For Disney heads, one of the best things about Disneyland is the pretty visuals and nostalgic music. You can find both at the limited-time Disney100 Light & Sound Show at the HSBC Rain Vortex. Grab a seat near the Mickey Steam Boat display for the best views. 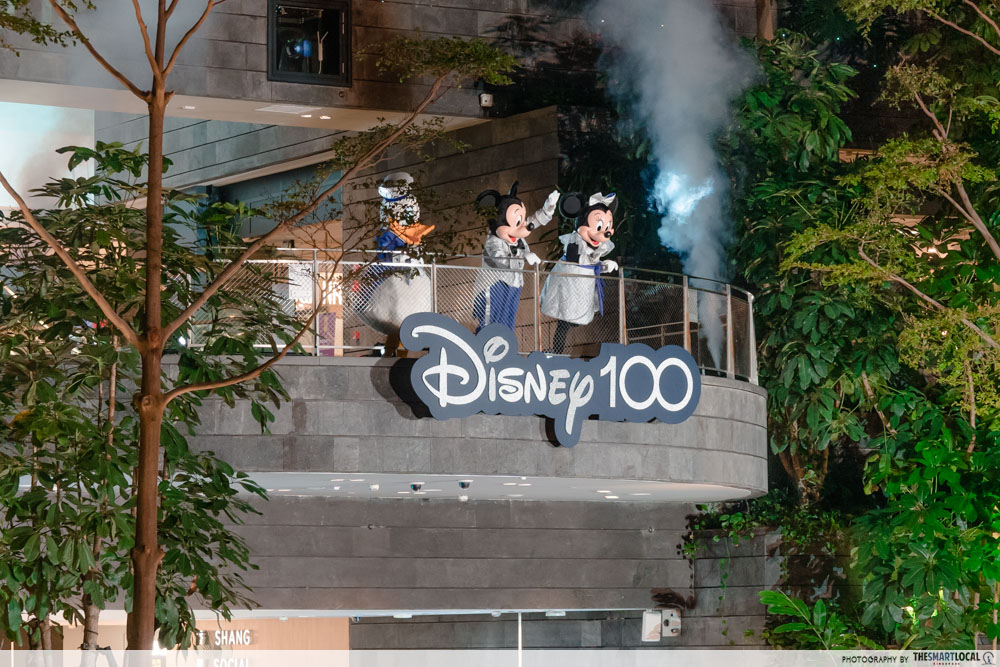 Featuring iconic Disney characters from across the century, this whimsical show comes complete with background instrumentals to When You Wish Upon A Star and You’ve Got A Friend In Me that you can croon to with your kids.

On the launch weekend of 12th-15th January 2023, they’re also running an extended 6-minute-long version of the show, with a dance performance on the forest floor. 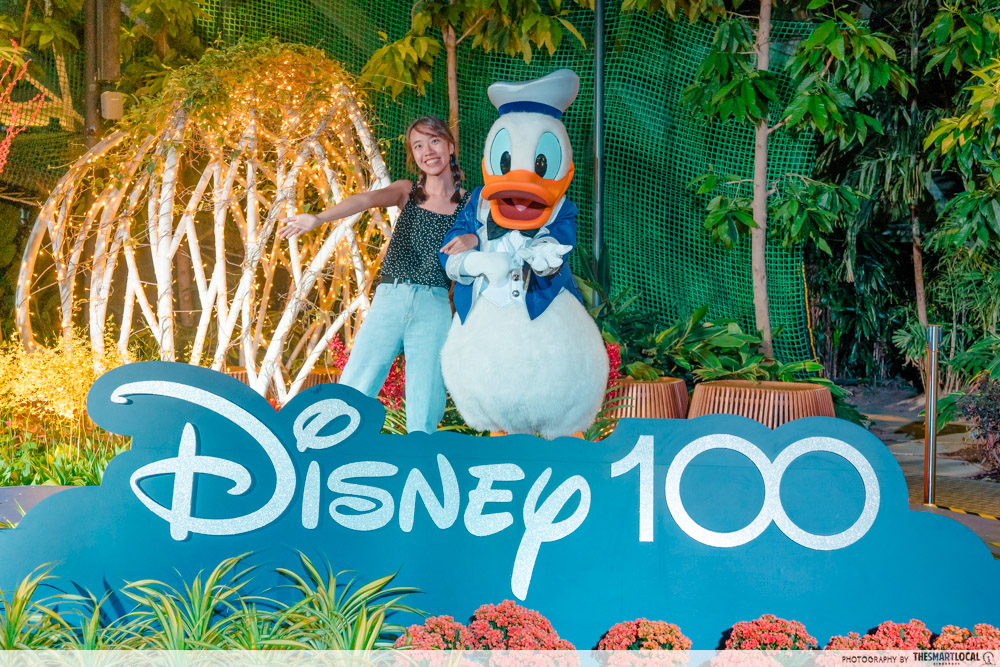 Hugging your Disney plushie is one thing, but embracing an IRL Mickey and Minnie is another. Meet iconic Disney characters in a meet-and-greet at the Shiseido Forest Valley during the launch weekend, available 4 times daily. To secure a slot, you’ll want to arrive at least 15 minutes in advance to grab the free passes that will be distributed. 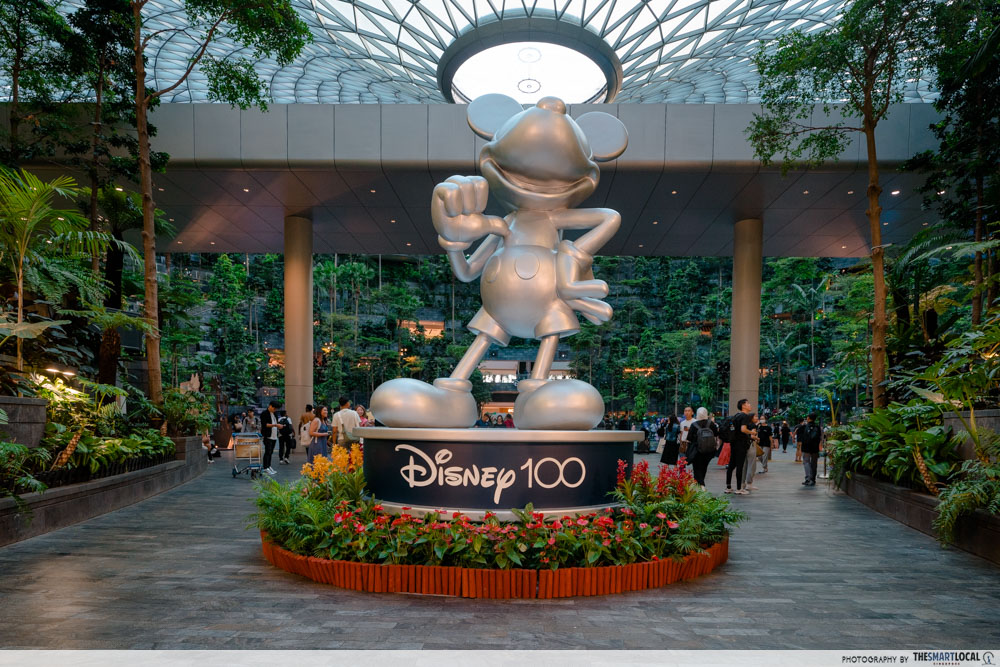 There’s nothing more iconic to Disney than Mickey Mouse. Find a 4m-tall platinum statue of the most famous rodent in the world at the entrance of the Shiseido Forest Valley, right behind a LED display of a Disney 100 archway you can walk through. 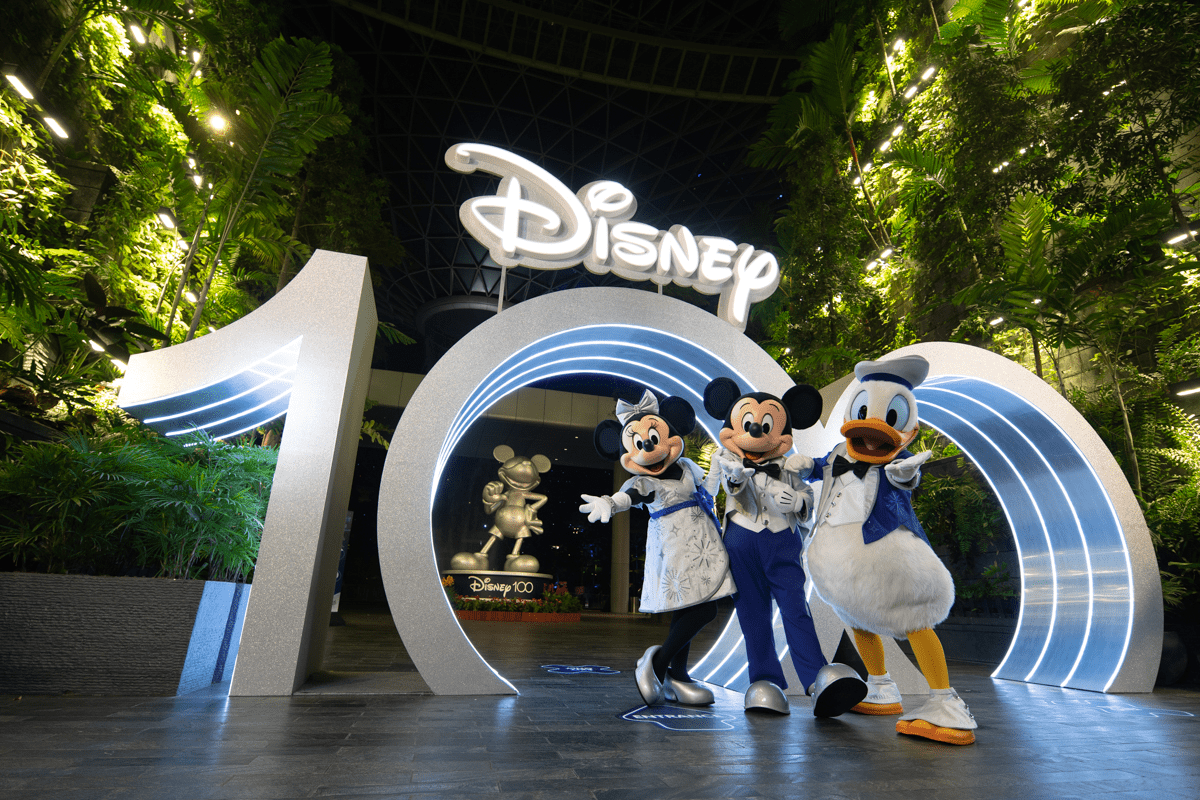 Now, I’ve always wanted to be in a Disney movie. But while it’s impossible to zap yourself into a 2D character and walk into a TV screen, you can feel like you’re in a Disney, Pixar, Marvel, or Star Wars film at the 10 exclusive pop-up installations scattered across Jewel. 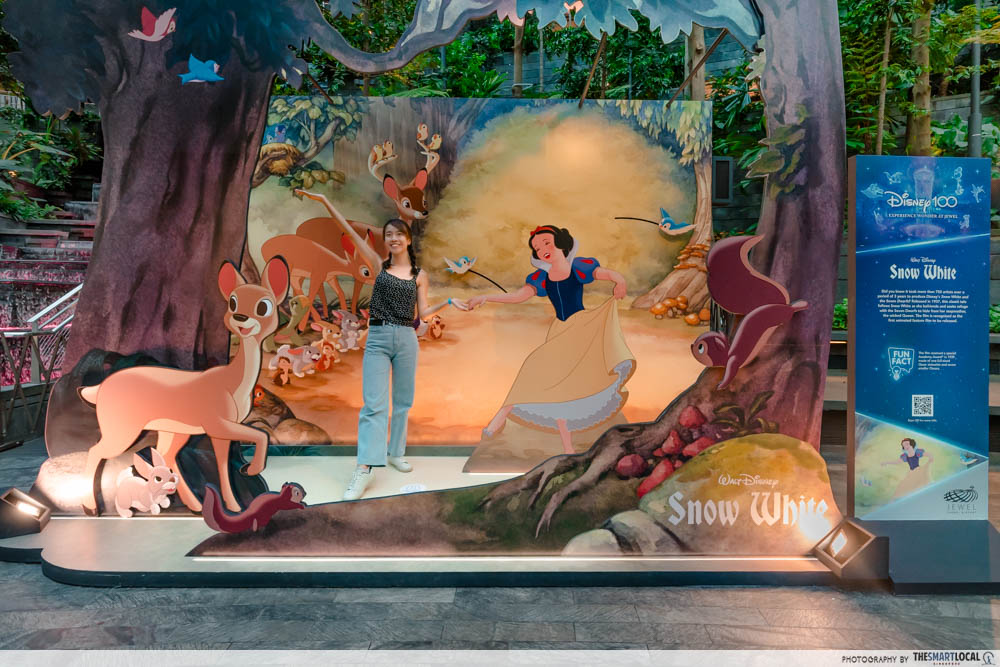 If the kids are feeling grumpy or sleepy, posing with the dreamy Snow White ought to cheer them up. Kudos to OG fans who get the pun. 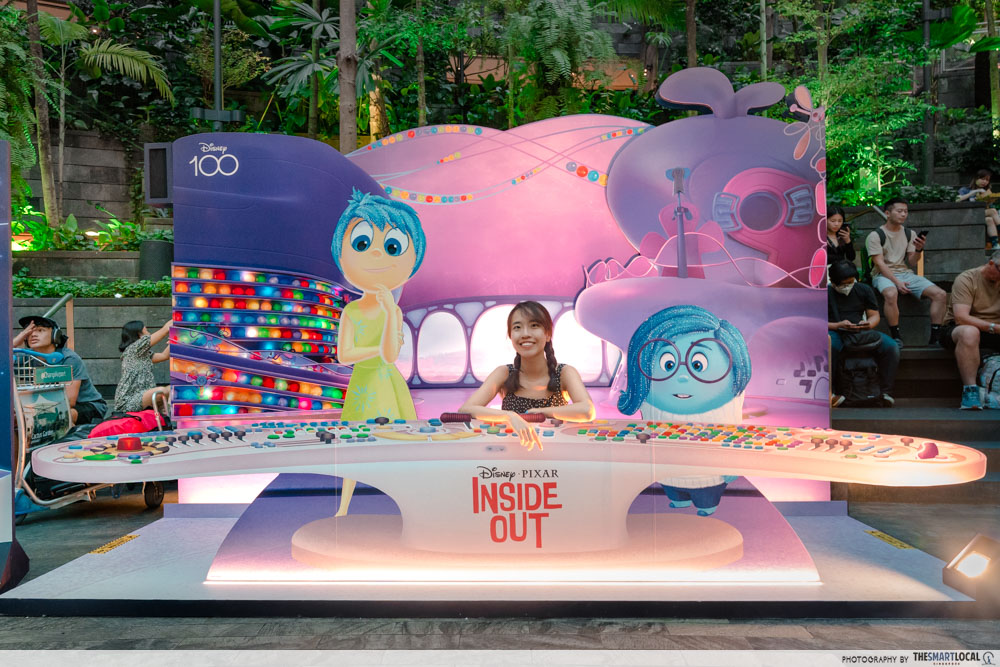 And whether you resonate more with the characters of Joy or Sadness, hop behind the “control panel” of the Inside Out installation to snap a selfie with both. 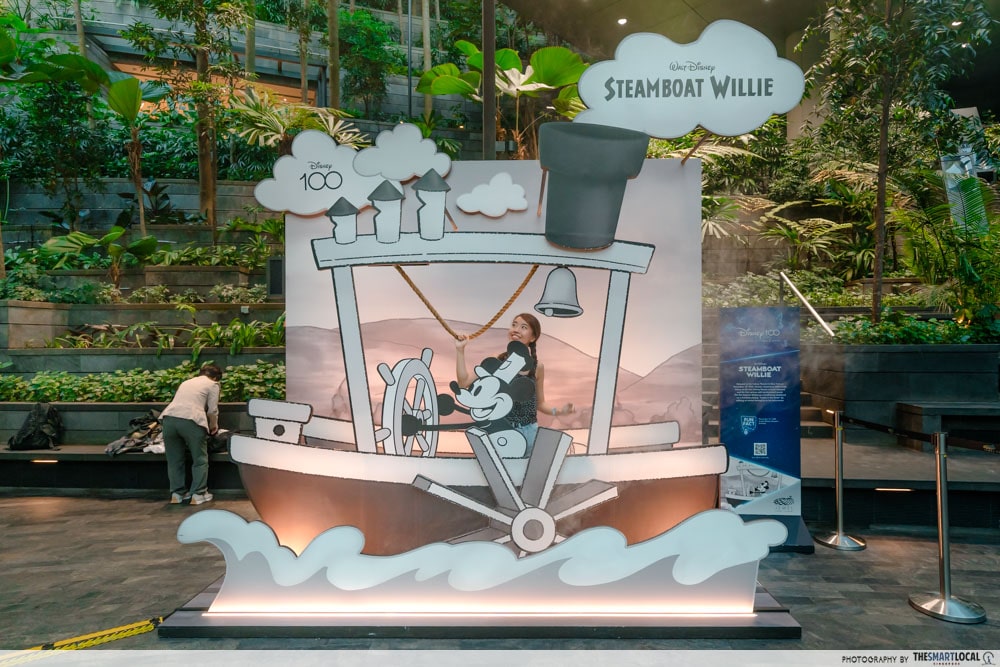 Once you reach the Steamboat Willie exhibit, give the overhead rope a little yoink. It ain’t just for display – pulling this interactive feature causes steam to emit from the top of the chimney. 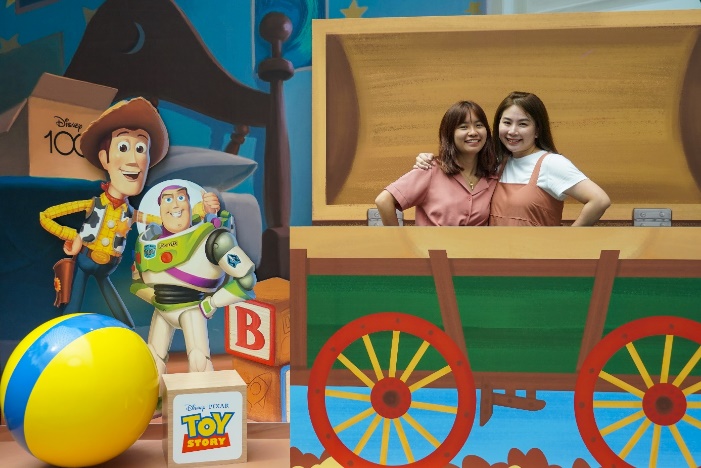 Around the Forest Valley, you can also find Winnie the Pooh, The Lion King and Toy Story pop-ups.
Image credit: Jewel Changi Airport 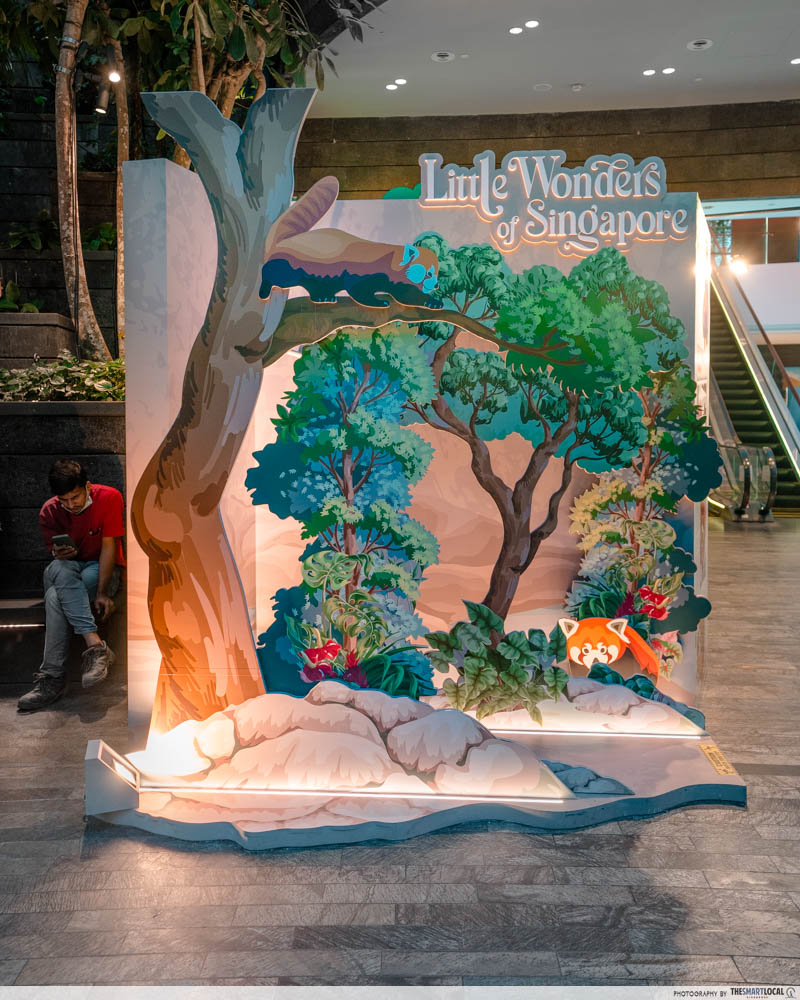 Apart from Disney-themed exhibits, you can also find pretty Singapore-themed displays inspired by the Singapore Zoo and our void decks. These also tie into elements of Disney – take a guess or read the accompanying sign boards to find out more. 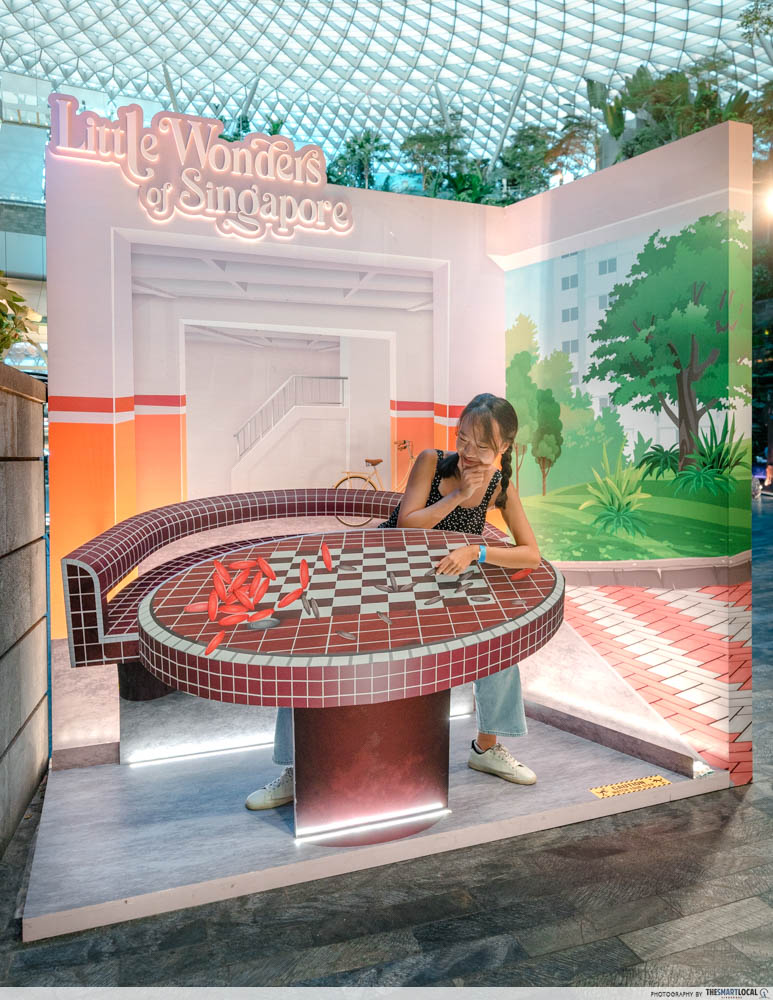 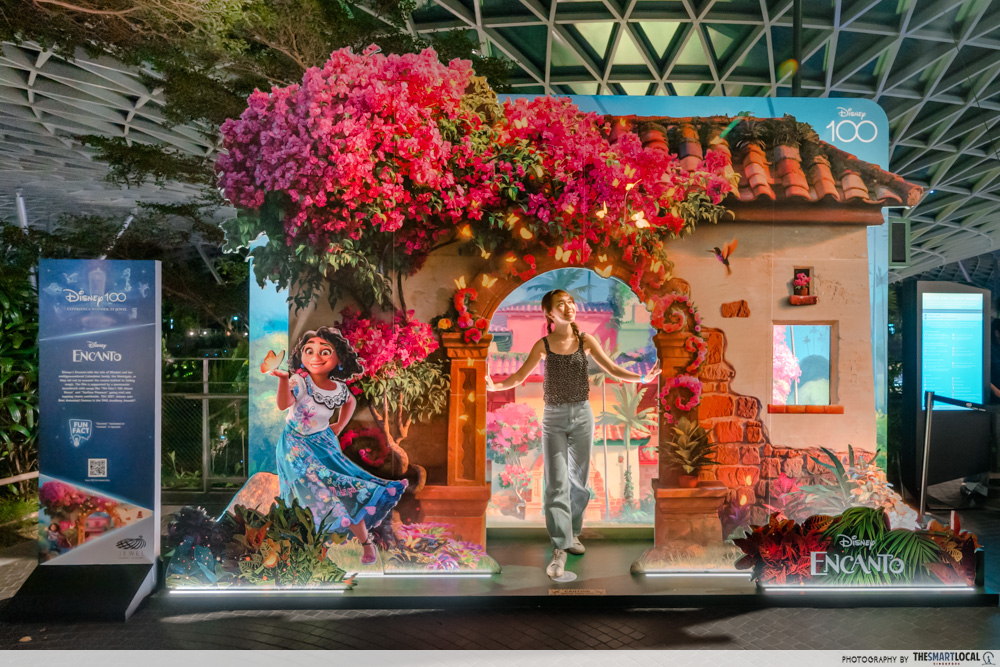 The Madrigals? Boy have they stolen our hearts in the cinemas. Head up to Level 5 to find the Encanto backdrop, which is as vibrant and colourful as the film is. Plus, here’s a little pro tip: try to snap all your photos in the evenings, before it’s fully dark out for the best lighting. 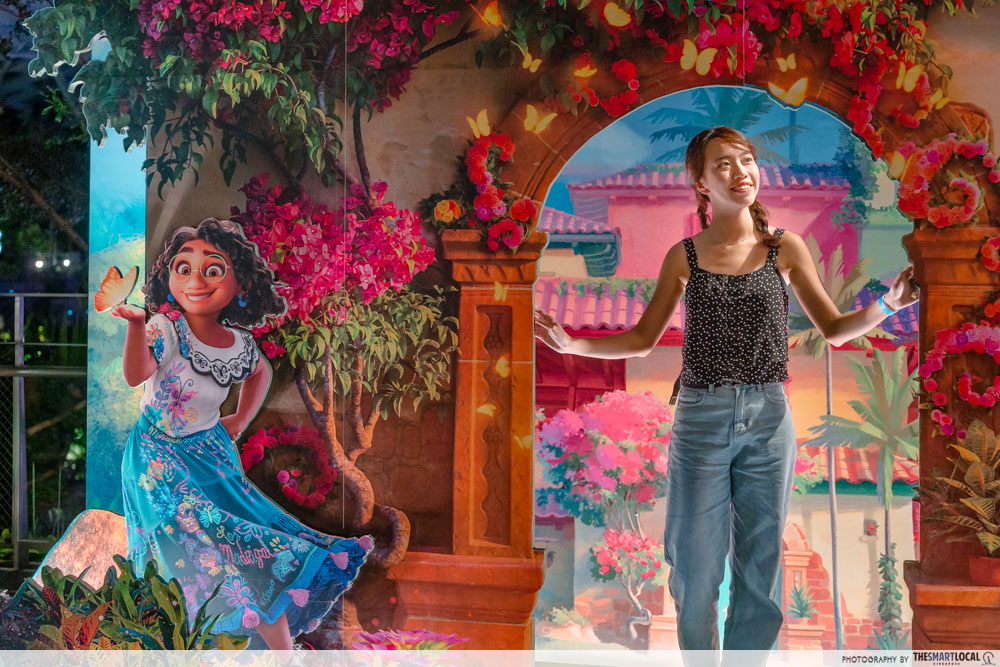 If there’s anything a Singaporean could love more than our favourite childhood show, it’s free things. From 13th-15th January 2023, entry to the Canopy Park is F.O.C if you dress up in your best Disney-inspired outfit. Now’s the time to dust off that ol’ Halloween costume or your kids’ princess dress. 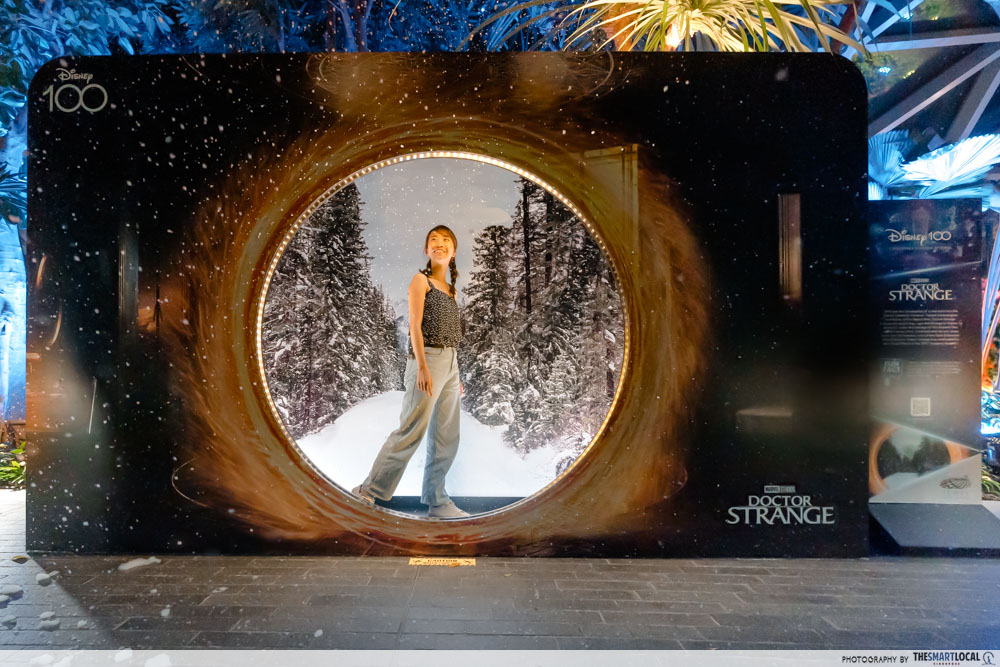 Feign mastery of the Mystic Arts at the Doctor Strange exhibit, which mimics the MCU’s Interdimensional Portal. With artificial snow blasting over the installation, our guess is that this exhibit gives a nod towards Spiderman 3’s scene with the snow in the sanctum. Pretty cool. 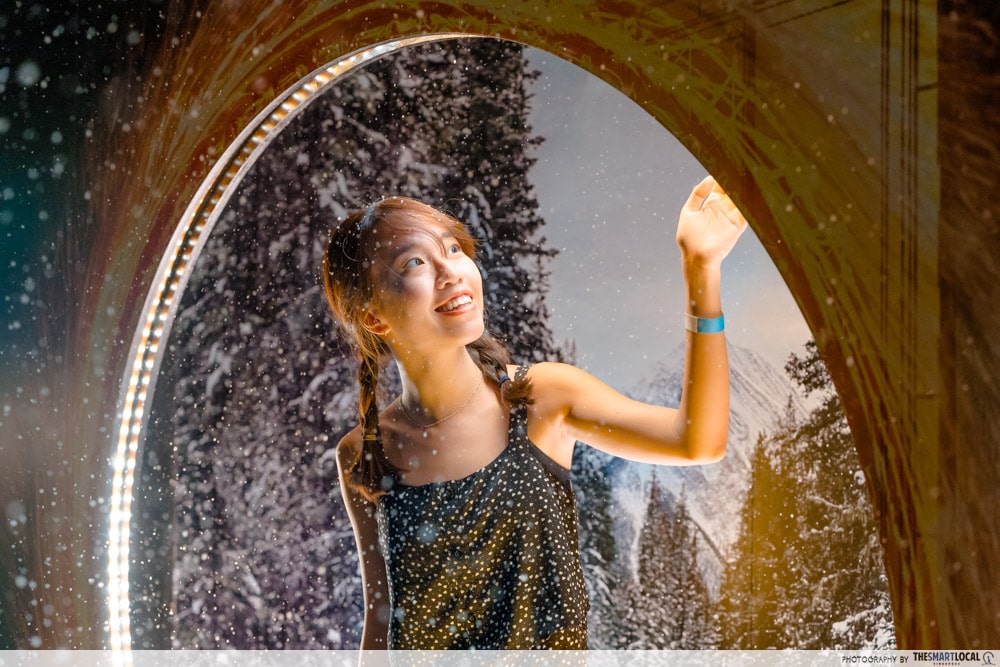 Try shooting at some of the exhibits at an angle for a better angle for the ‘Gram. 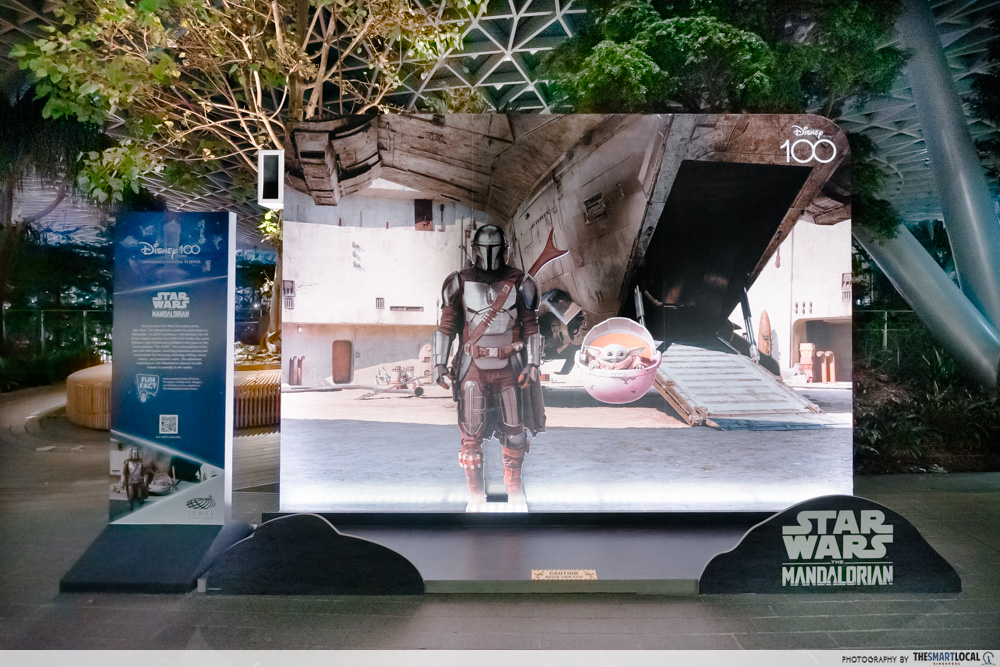 Of course, no Disney event is complete without homage to Star Wars. Most notably, this Star Wars exhibit features the adorable Baby Yoda that bobbles up and down on a lever – a perfect opportunity for an IG Boomerang 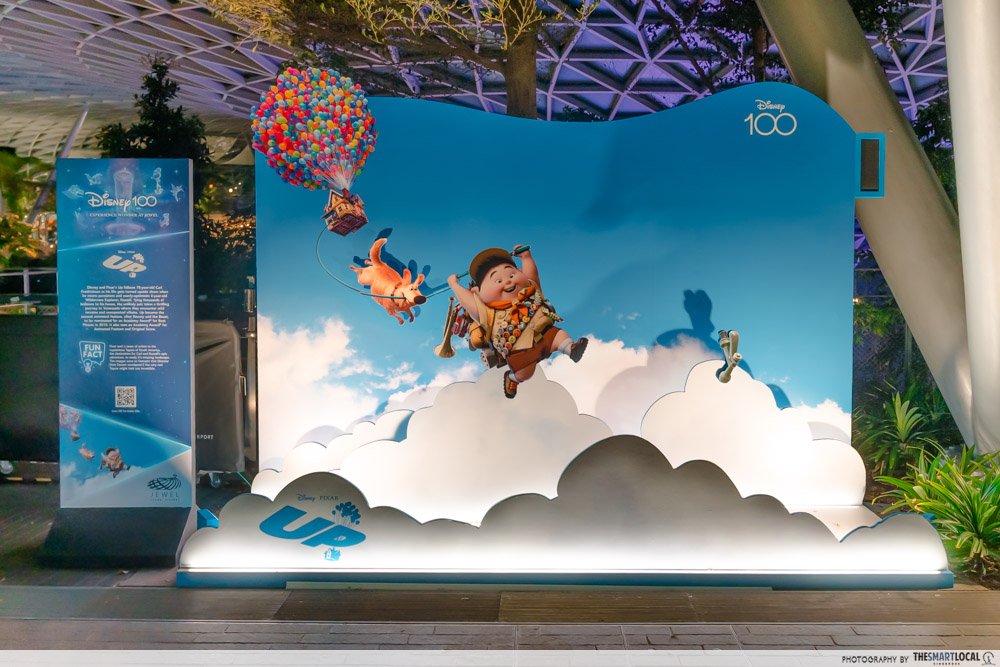 It doesn’t matter if you’re as old as Carl Fredricksen or as young as Rusell, you’ll want to snap a photo with at the Up installation featuring the iconic house-on-balloons and Dug the dog.

Venue: Canopy Park
Admission: From $6/entry for Singaporeans | From $8/entry for a standard ticket
Free if you dress up in a Disney theme from 13th-15th January 2023.

Immerse yourself in Disney magic at Jewel Changi Airport

Other than rewatching your favourite movie on Disney+ or booking a flight to the nearest Disneyland, you can now immerse yourself in some of the most popular Walt Disney films at Jewel Changi. For one, this takes our happiness levels up, up and away.

Find out more about Disney100 at Jewel Changi Airport

For more events and things to do in Singapore:

This post was done in collaboration with Changi Airport. However, all opinions are ours.
Photography by Afiqah Amir. 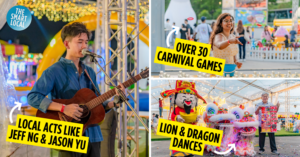 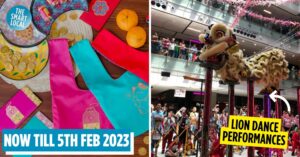