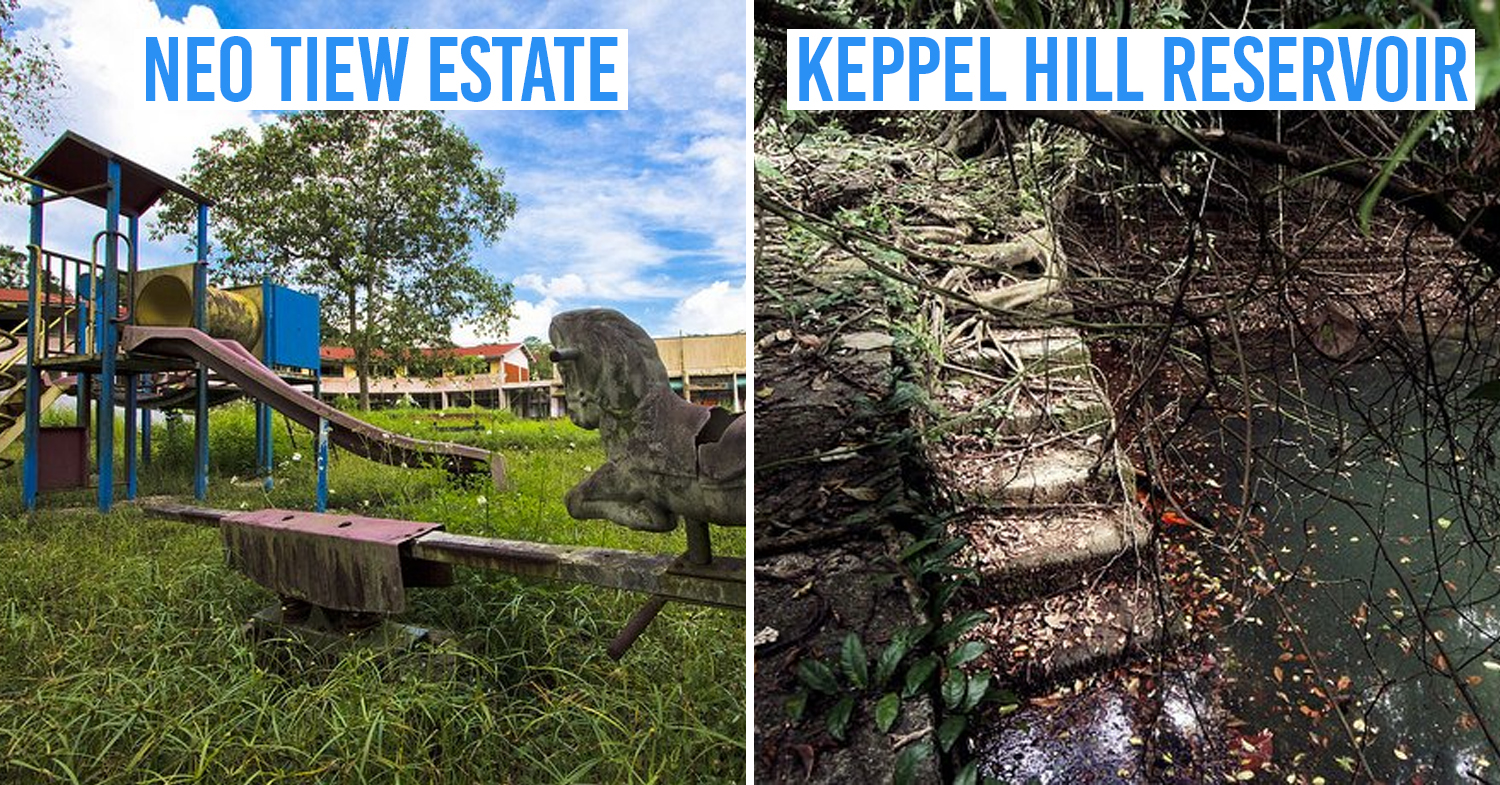 Note to our readers: Certain places have since become illegal to enter. Please obey the law and do not trespass at such places. Safety above all!

Singapore is known for being a modern country, with world-class shopping centres, hotels and casinos. But every country has its humble beginnings, some remnants of which can’t keep up with the rapid development the rest of the country is undergoing. Here is a list of abandoned places rich in history that we dug up, but be warned: along with the passage of time comes the rumours of hauntings and unusual sights. 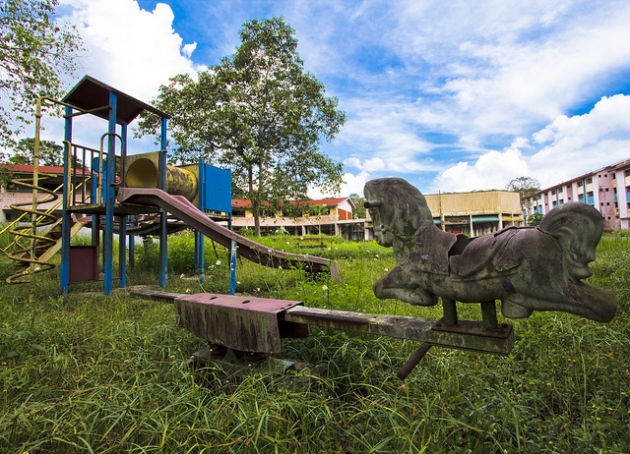 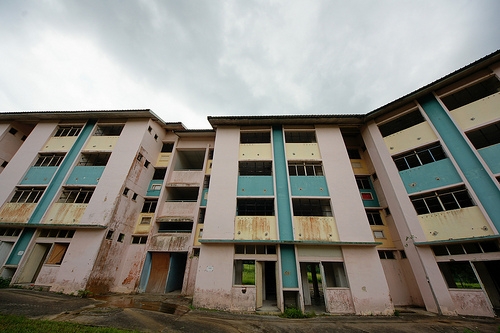 A whole estate of abandoned HDB flats, when Singapore is constantly looking for land to reclaim to accommodate our expanding population? Sounds fishy… Decorated with graffiti and offerings to spirits, only the brave would venture here – which may be why the army conducts urban operations exercises at Neo Tiew Estate!

Accessibility: The area has since been fenced up and you can now only take photos from a distance. 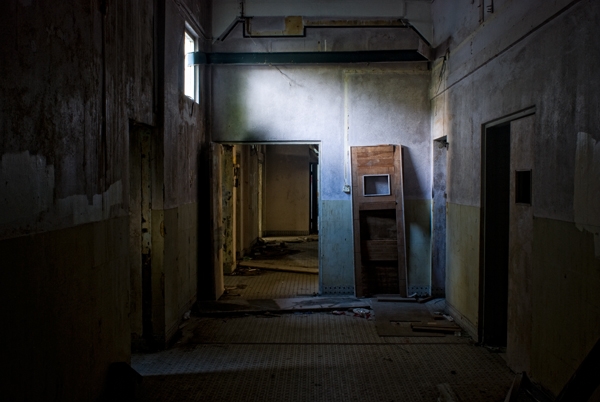 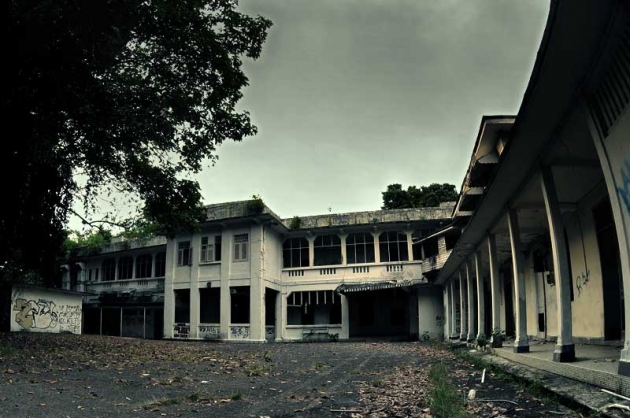 Perhaps the most famous haunted spot in Singapore, Old Changi Hospital has been around since 1935. During World War 2, it was used as a prison camp during the Japanese Occupation, seeing much tragedy.

A mockumentary was made about it in 2010, called Haunted Changi. Complete with satanic graffiti and pentagrams, I felt goosebumps just looking at the photos!

Accessibility: The place has since been renovated-I’m surprised they didn’t demolish it- but rumours are that the hotel is still very much haunted despite the new coats of paint. Good luck with the hotel! 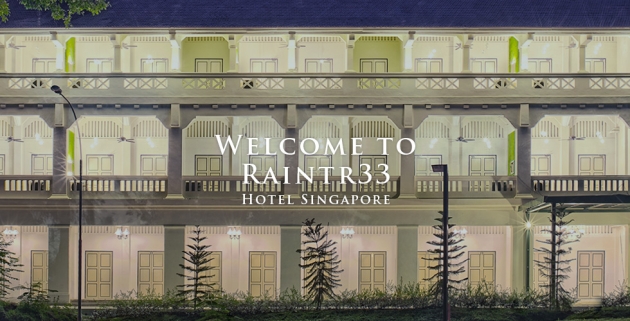 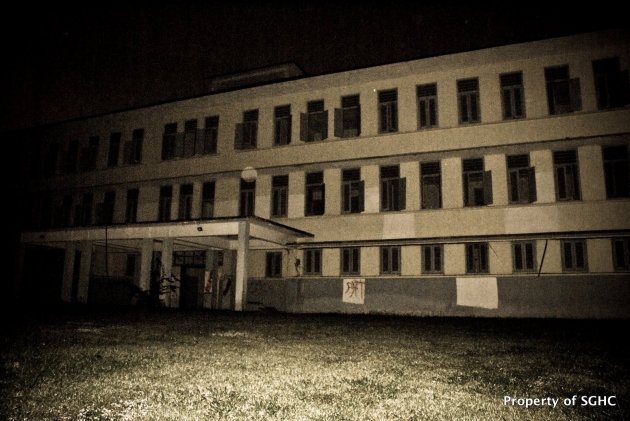 When talking about mental hospitals in Singapore, Woodbridge Hospital is the first hospital to come to mind. Few people know of View Road Hospital, which was built in 1975 to deal with the overcrowding at Woodbridge Hospital. Converted into a foreign workers lodge in 2001, it was emptied out and abandoned four years later. Rumours say it’s haunted by patients who remain trapped inside…

Accessibility: It was converted into a foreign workers’ dormitory before being abandoned again, and is now fenced up with CCTVs. 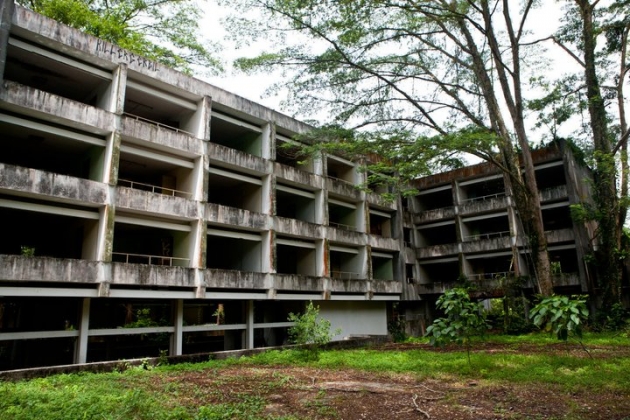 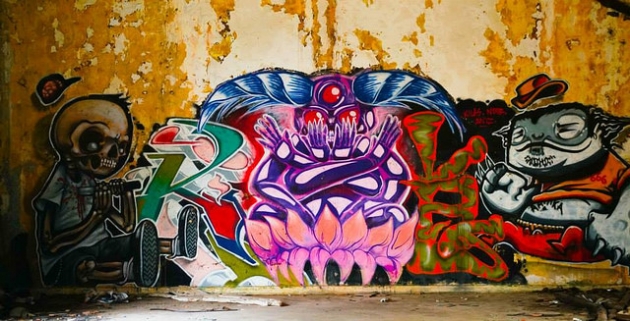 Situated in one of the most affluent estates in Singapore, it would surprise many to know that there is a derelict building among the posh houses and cars. Built in the late 1950s, it was intended as a hostel for the many Brunei students coming here for an education then. It eventually closed in the 80s when Brunei started establishing their own elite schools. Graffiti can be found here – while we don’t condone it, you can’t deny the skill of some artists involved.

Accessibility: The gate is chained, but there is a hole beside it that intrepid explorers can use to enter and explore. 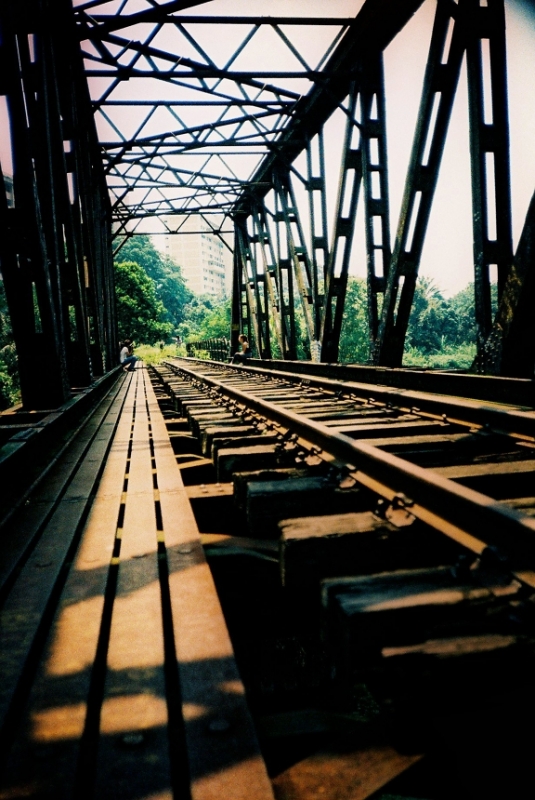 A train track that used to connect Singapore and Malaysia, the railway track near Sunset Way has since become defunct for many years. Something that sets this station apart from the other disused stations – the tracks are on a suspended bridge. It provides many picturesque spots for photoshoots, but people with a fear of heights may want to avoid this area – the lack of railings at some parts and the rotten wooden planks make for a shaky path across!

Accessibility: Dangerous, so proceed with caution! 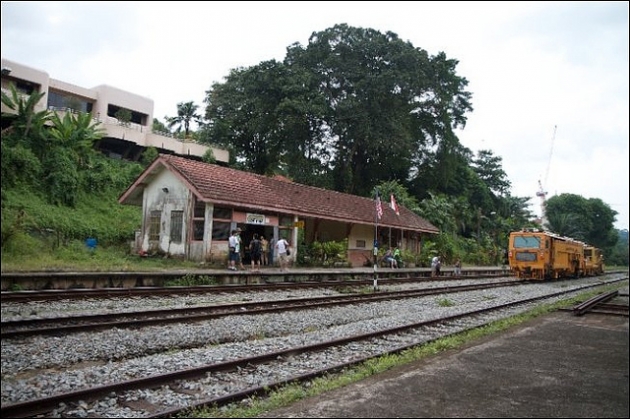 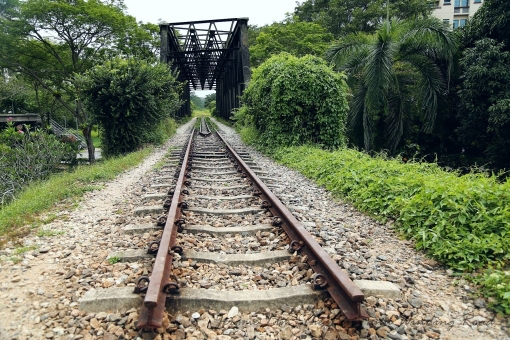 Yet another train station that was closed in 2011 after the Malaysian railway became defunct, this track has been around for over 100 years. Due to its strategic location near a nature park, it was decided that the building, and the flora, and the fauna around it would be conserved.

Accessibility: Open to the public during daylight hours. 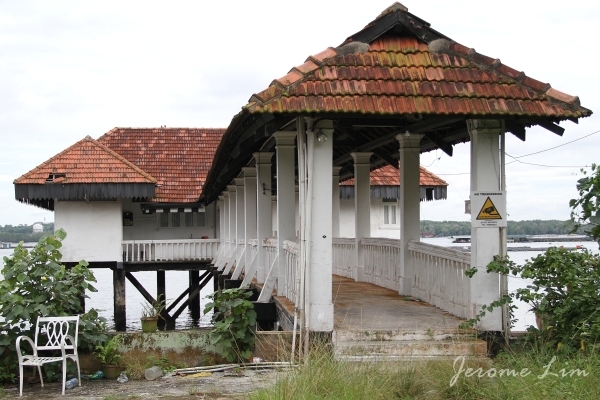 Around since before World War 2, Lim Chu Kang Pier was allegedly used by the Japanese as a makeshift brothel during the war. The Cashin Family – who also owns the Matilda House in Punggol – reclaimed it after the war and used the place as a weekend resort. An idyllic location surrounded by peace and quiet, it’s no wonder they went there to relax!

However, after Howard Cashin’s passing in 2009, it was not used any further.

Accessibility: This place has been closed off to public and fenced up, since late 2013. 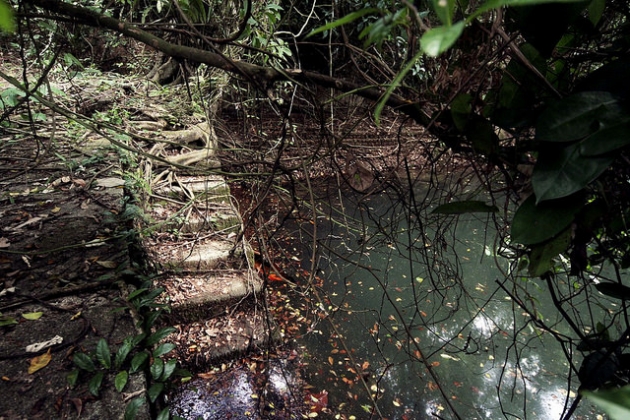 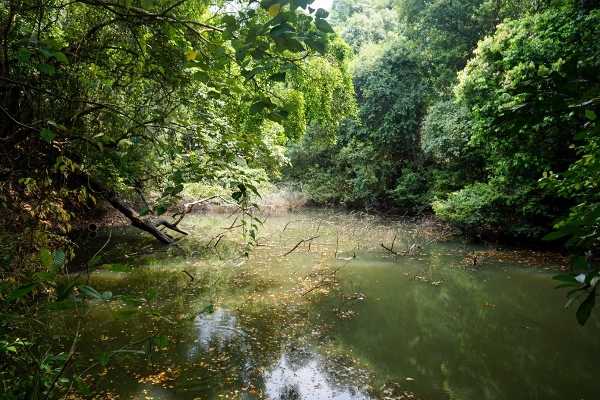 Source: Life in The Wee Hours

Dating back to as early as 1905, this beautiful reservoir was forgotten over time and left to be reclaimed by nature until it was recently rediscovered in September 2014. Located in Mount Faber Forest, there are still traces of the past – you can still see concrete steps and an old diving board here. Keppel Hill Reservoir made the news on two separate occasions, when two soldiers and a 17 year old boy drowned in 1936 and 1948 respectively.

Accessibility: Open to public – trekking required so children below 12 years old are not recommended to go.

Abandoned since 1996 when the CID headquarters moved down the road, rumours have swirled around this place. It looks nondescript, but houses terrible secrets, like the infamous 13 cells that hardened criminals have committed suicide in, as well as the suicide of the policeman in the toilet. The spook factor here can give Old Changi Hospital a run for its money.

Accessibility: Gazetted for conservation in 2008, the place has since been renovated and is now the Straits Student Hostel. As with Raintr33 Hotel, sleep here if you dare. 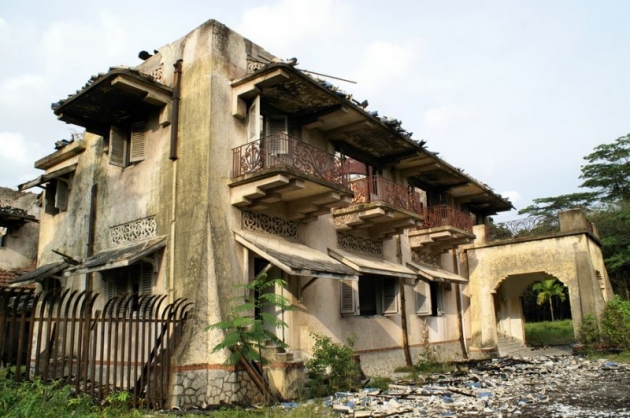 This old mansion is one of the most photogenic buildings in this list. Often confused with Istana Tyersall, which was burnt down in 1905, the Istana Woodneuk was built for the fourth wife of the then-Sultan of Johor. As the house and the land it’s on still belong to the royal family of Johor, the dilapidated house still stands, even after being empty for over 50 years.

Accessibility: Private property, but there is a hidden road you can use to sneak in. 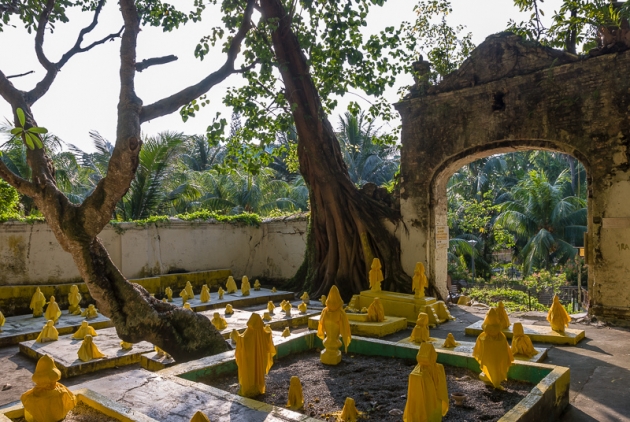 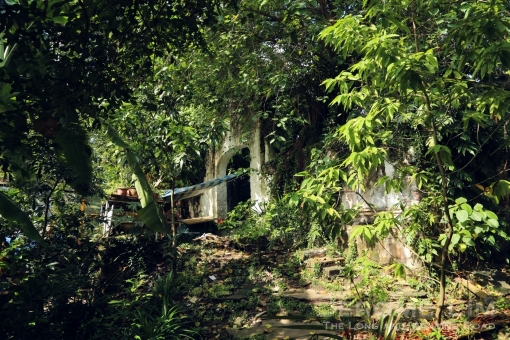 This stone-walled compound is situated far away from civilisation on a hill. Behind its arching entrance is a burial ground of some members of the Johor royalty. While abandoned and mostly run-down, there are caretakers and other visitors that come to pay their respects once in a while. The oldest grave dates as far back as 1721 – some descendent of Sang Nila Utama are said to be buried here as well! 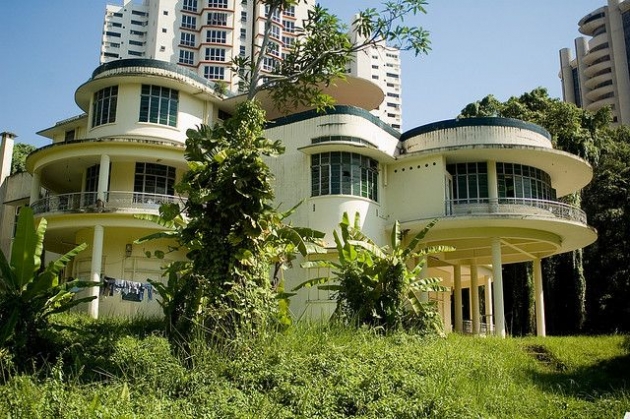 Built in the 1930s by famous architect Ho Kwong Yew, it has remained empty from the 70s, in part due to a legal battle. While the facade of the building is still in good condition, the inside has been overrun by trees and graffiti. Still, because of its position on a prime piece of land, the estimated worth of this house is over $400 million. Not bad for a derelict building!

Accessibility: Given conservation status in May 2008, this building is technically closed to public and there are “No Trespassing” signs, but we’ve heard it’s relatively easy to get in. 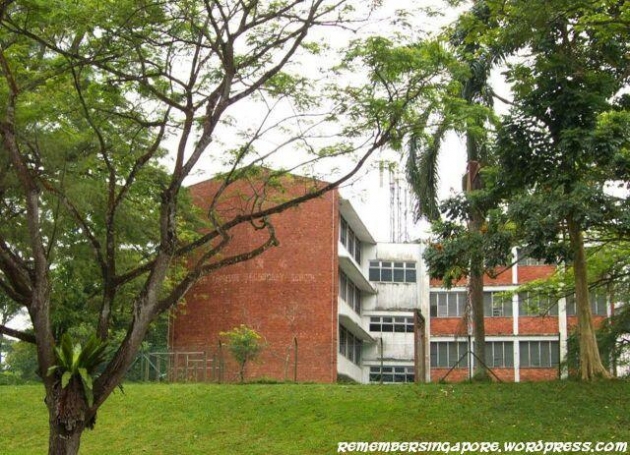 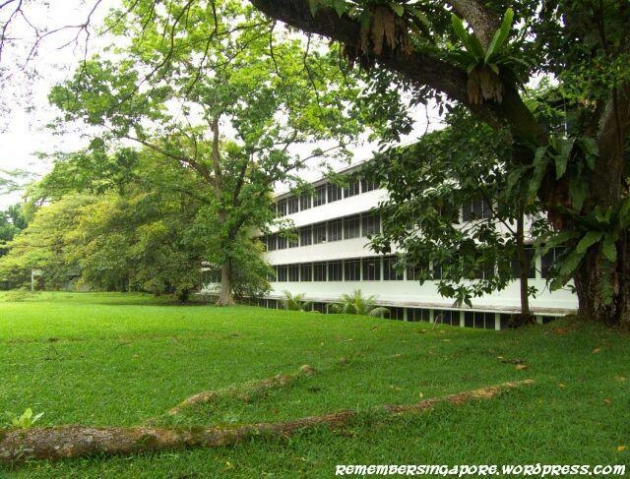 Opened in 1965, this was the campus of Upper Thomson Secondary School before it was converted into Seletar Institute in 1988. After closing in 1997, it remained abandoned for more than a decade. There have been rumours about this place being haunted, but, as is always the case, nothing seems to have been proven yet.

Accessibility: The gates are locked with a CCTV at the entrance, so entering is not advisable. 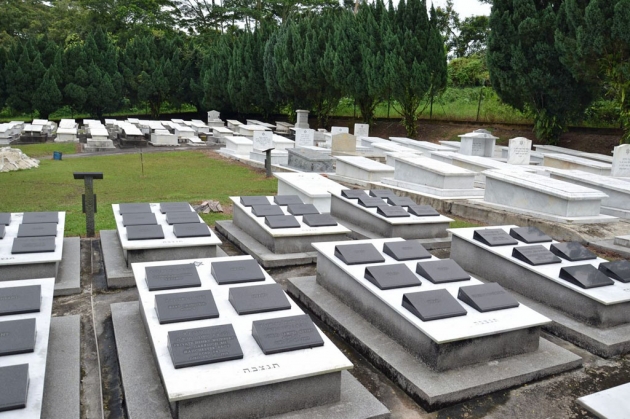 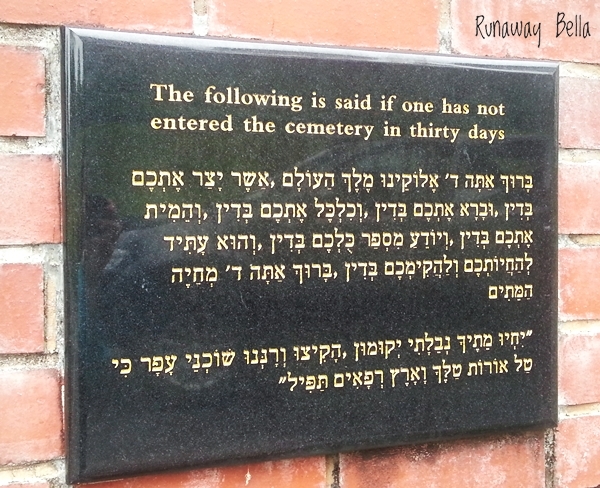 First off, those who are planning to visit this place should know that there is a Jewish prayer for the deceased at the gates, to be said by those who have not visited a cemetery in the past 30 days.

Now that  you’ve said it, you’re ready to go in. Try not to wet your pants. This cemetery has been around for 40 years, but the people buried there have been dead for over 100 years.

Accessibility: As long as you’ve said the prayer, the cemetery is open to public during daylight hours. 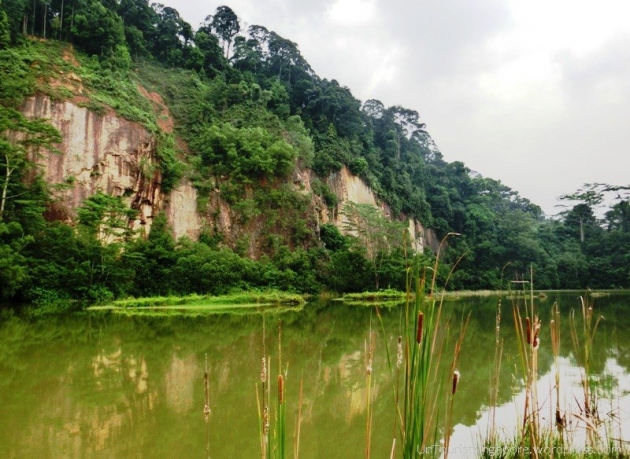 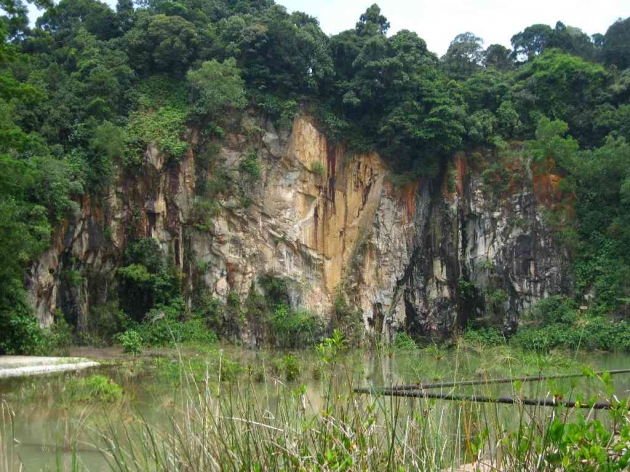 A modern city we may be, but there are still some areas of Singapore relatively untouched by society’s progress. One such place is Singapore Quarry Wetland. A beautiful place that seems to belong to a faraway forest, it remains a well-kept secret only known by nearby residents! While technically not abandoned, but we thought we’d add this in anyway as the pictures certainly made us gasp.

Accessibility: Closed to the public to give the place to recover from the quarrying, there is now a viewing platform for people to take in the glory of this old quarry.

Get ready for an adventure

For those thrill-seekers and night owls out there, go after dark for a bigger adrenaline rush. Remember to bring along a camera to document your adventure, and of course a partner-in-crime (preferably one who can drive)! If you know any other abandoned places in Singapore that we’ve missed out, do comment below and let us know. 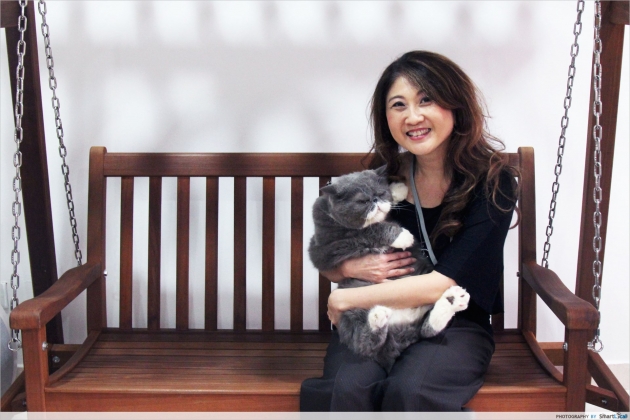