Before video games like Valorant and Grand Theft Auto, many of us would spend our afternoons trying to beat our friend’s high scores at the neighbourhood arcade. We’re years past those halcyon days, with arcade games getting massive upgrades – from high-tech sensors to coupon-spitting machines.

Whether you used to be a regular at Virtualand or had birthday parties at Timezone, take a trip down memory lane and revisit some of the most nostalgic arcade games we used to bug our parents to let us play.

Check out some arcades in Singapore here: 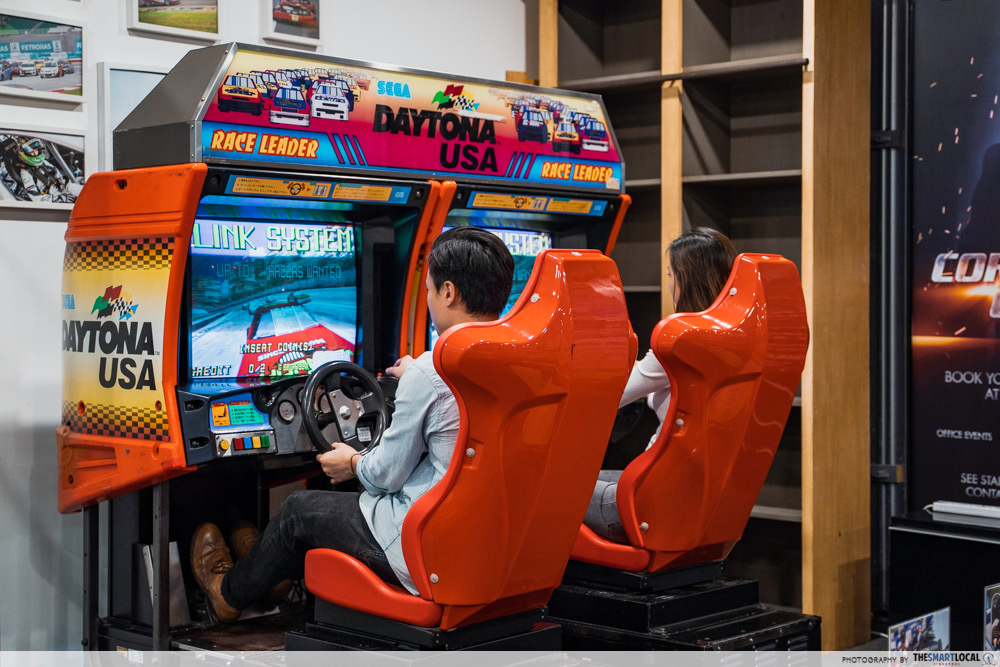 There’s a reason why every arcade had rows of Daytona USA stations. From the infectious soundtrack to the hilarity of watching your friends skid off onto the grass and end up in last place, it was easy to love this adrenaline-inducing arcade game. 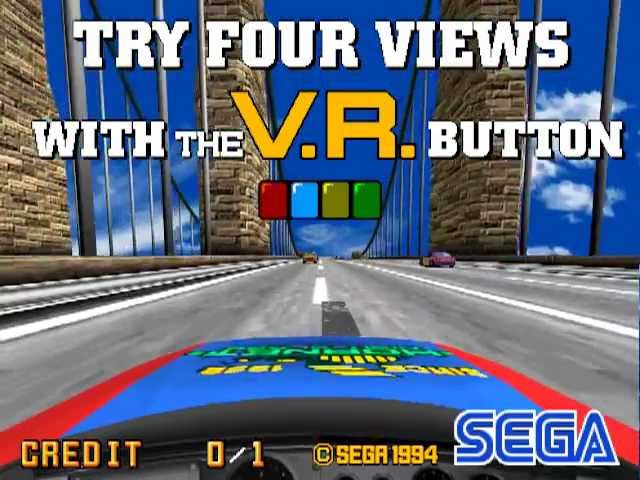 This iconic series had us competing with 39 other racers for the first place like its real-life inspiration, the Daytona 500 NASCAR race. Noobs like yours truly would always go for the beginner circuit and automatic transmission because honestly, which 9-year old would’ve known how to operate the gear stick?

Similar games you can play: Forza Motorsport, Need For Speed 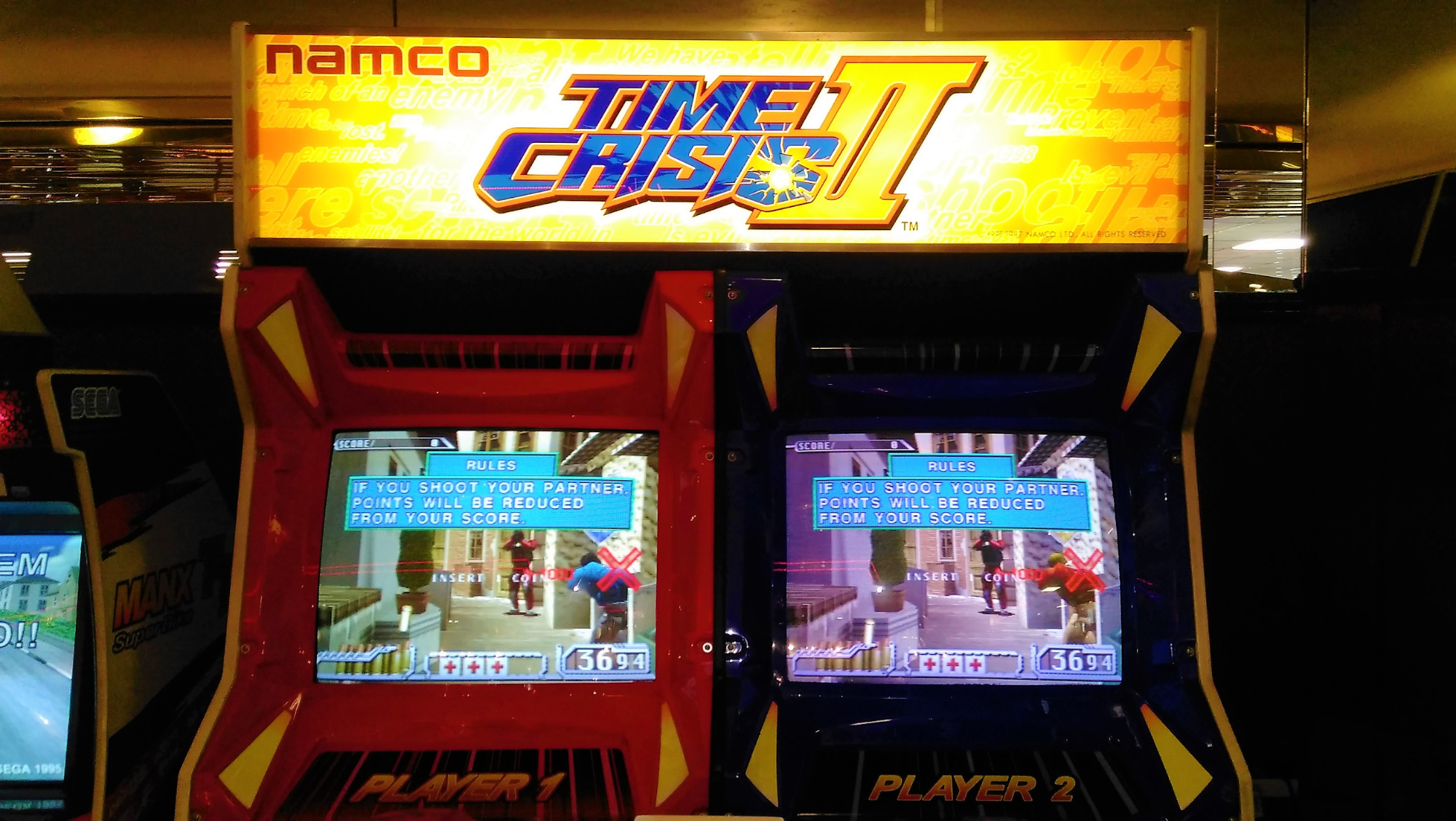 Time Crisis was the game that let us live out our James Bond spy fantasies, sans the going undercover. You had to shoot at the Wild Dog thugs using the trusty light gun while weaving in and out of cover as you only had a few lives before meeting the big boss. Going all gung ho was not the name of the game, as many of us would have learnt the hard way back in the day.

3. House of the Dead 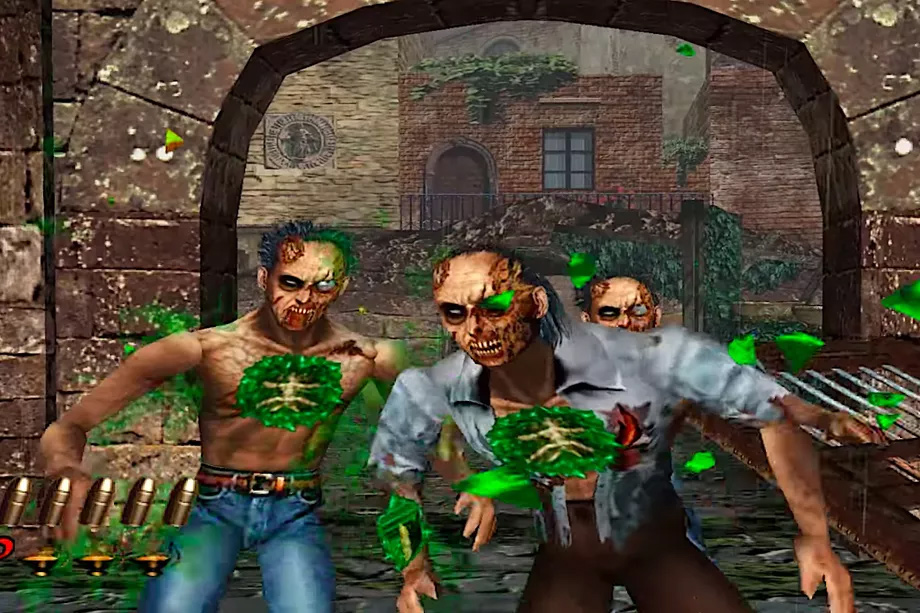 House of the Dead walked so Left 4 Dead could run. It’s one of the OG zombie video games where your mission was to save the damsel in distress, who was your fiancée Sophie in the first edition.

The impressive design of the mutated monsters and zombies coupled with the challenging levels made this a super addictive game that was hard to put down. It also debunked the former myth that zombies are slow and sluggish when it introduced fast running ones that now swarm us in modern video games.

Fun fact: The Japanese developers couldn’t speak or write English, and chose “House of the Dead” because the font looked the coolest as a visual. 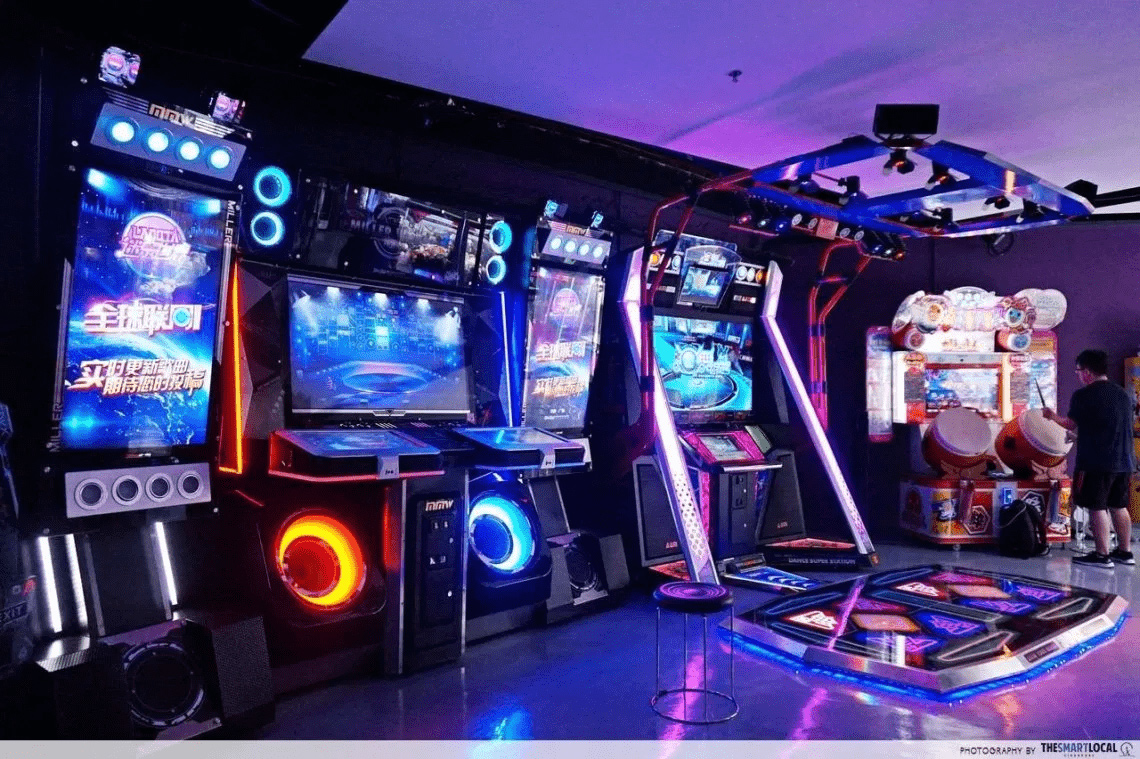 The Dance Dance Revolution stage was the one game where we were as happy watching people play as participating in it ourselves.

While the basic footwork was manageable, the “Maniac” difficulty level had us twisting our legs to the point where even the safety bars wouldn’t protect us from falling. 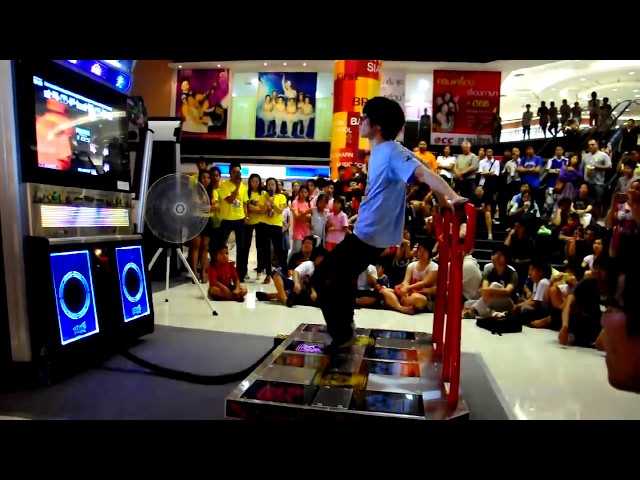 Nowadays there are plenty of spinoffs that make you really dance like Dancerush Stardom at Arcade Planet or Pump It Up at Timezone Westgate. But all the fancy lights will never compare to the memory of scoring a perfect game on DDR to the applause of an audience.

Similar games you can play: Dancerush Stardom, Pump It Up, Just Dance 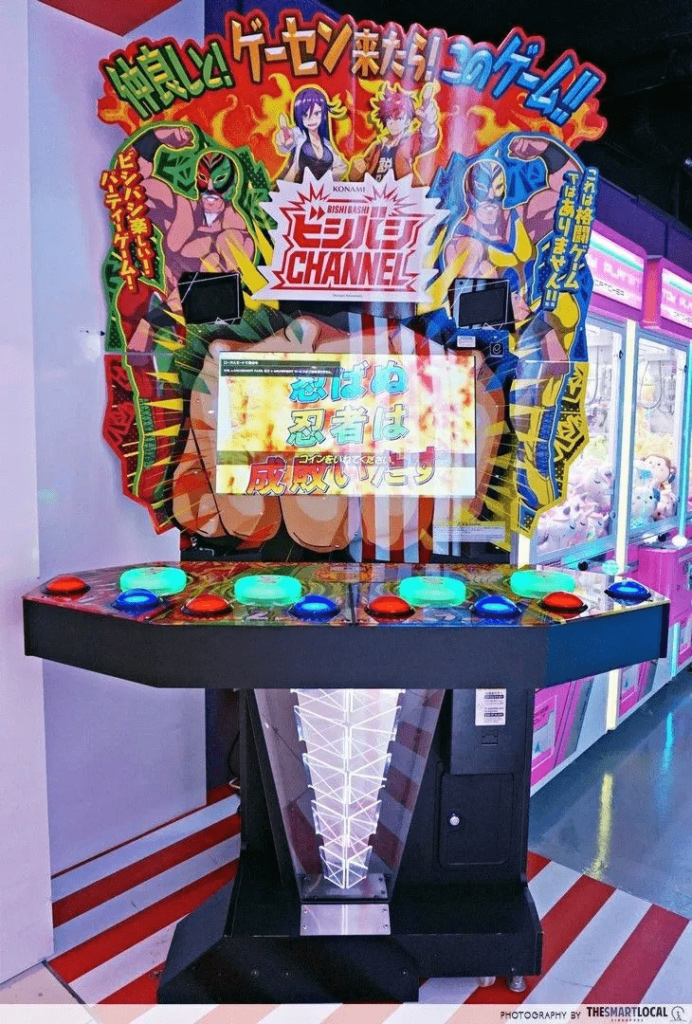 You and your clique would’ve probably spent a couple of hours bishing and bashing buttons at the Bishi Bashi station. From catching the fish roll with your fingers to finishing the ice kacang the fastest, these simple yet intense party games were a true test of your hand-eye coordination, teamwork and button mashing speed. 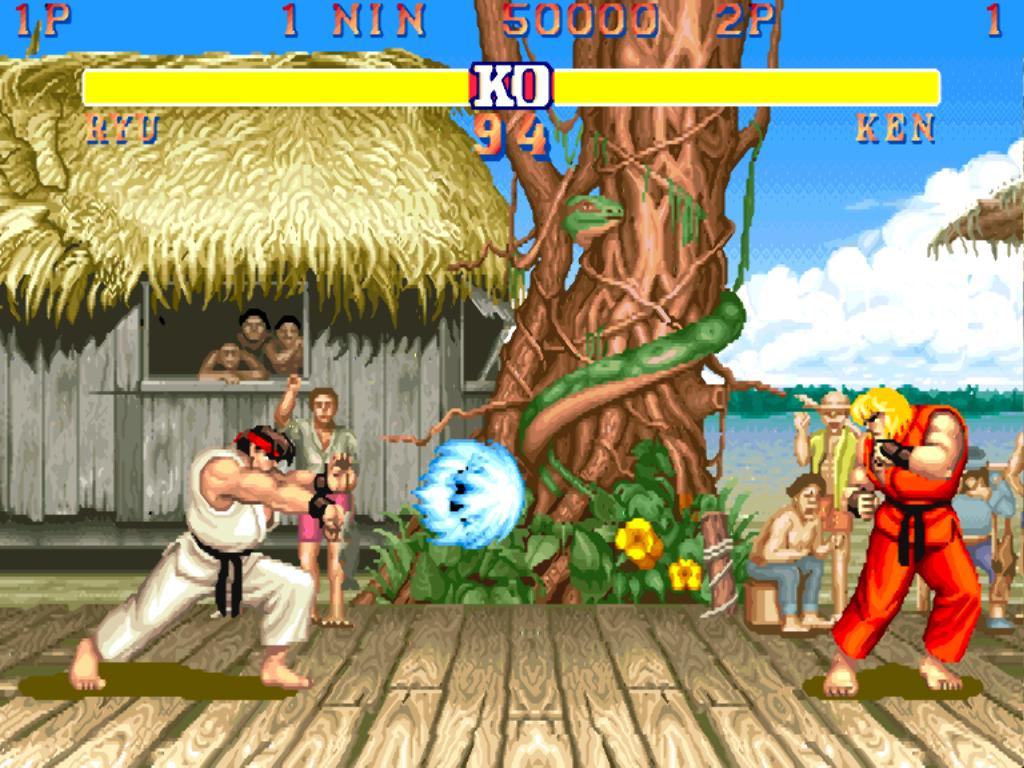 You’d have to be living under a rock to not know Street Fighter. The simple fighting game with its six buttons and joystick pioneered how other fighting games were controlled, and the “Hadouken” move even has its own Wikipedia page.

But it was Street Fighter II that introduced special combo attacks and made the game even more popular worldwide. Although truth be told, what most of us did was just randomly smash the buttons until our characters did something cool. 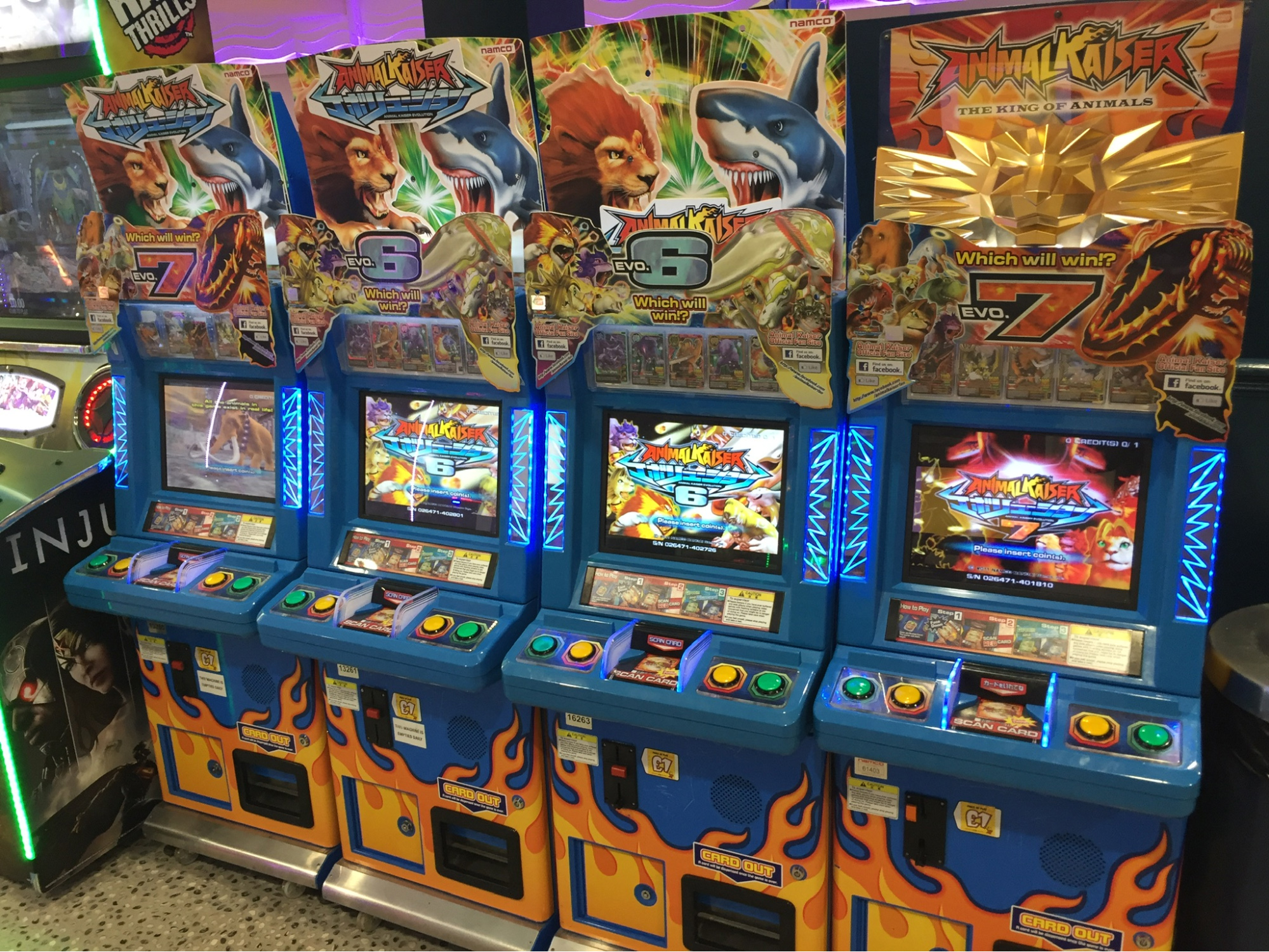 Did anyone else neglect their homework just to keep collecting Animal Kaiser cards?
Image credit: lmaosamsddr

Raise your hands if you spent many afternoons after school trading Animal Kaiser cards with your classmates. For the uninitiated, you collect animal cards, strong cards, and miracle cards and make a combination of them to fight stronger animals. Then came the boss fight which might take you a couple of tries but the feeling of beating it was *chef’s kiss*.

After each battle, you’ll also get back a random card as a reward. The chance of it being either a gold-level card or a normal card was like beginner-level gambling that our parents would’ve probably not been too happy about.

Similar game you can play: Hearthstone 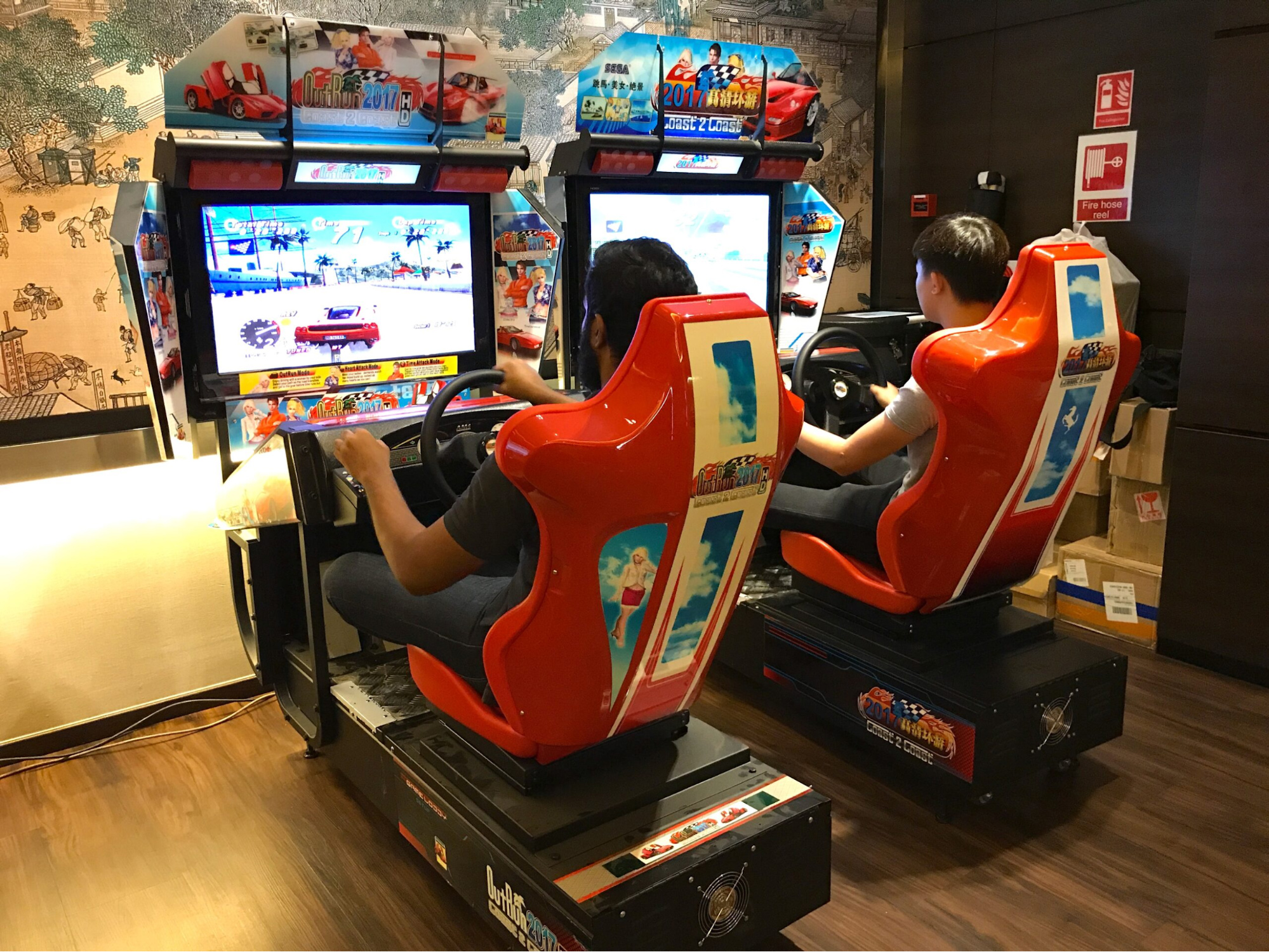 Racing on OutRun is probably the first and only time most of us would be “driving” a Ferrari Testarossa Spider. Rather than being a race against your pals, it’s a race against time to cross the finish line without stopping to admire the beautiful landscape, despite the fact that it was in 8-bit. 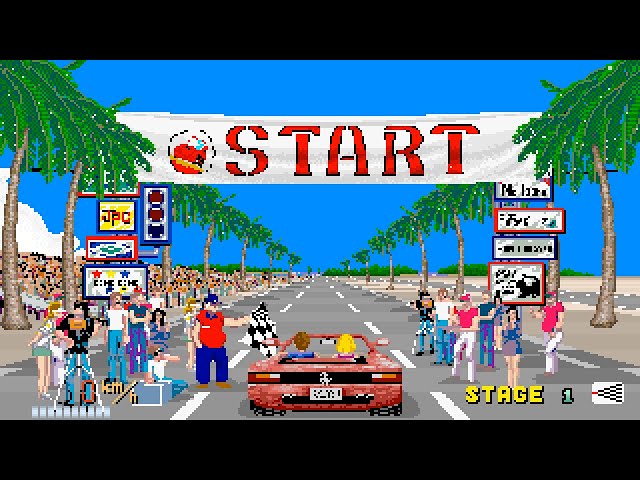 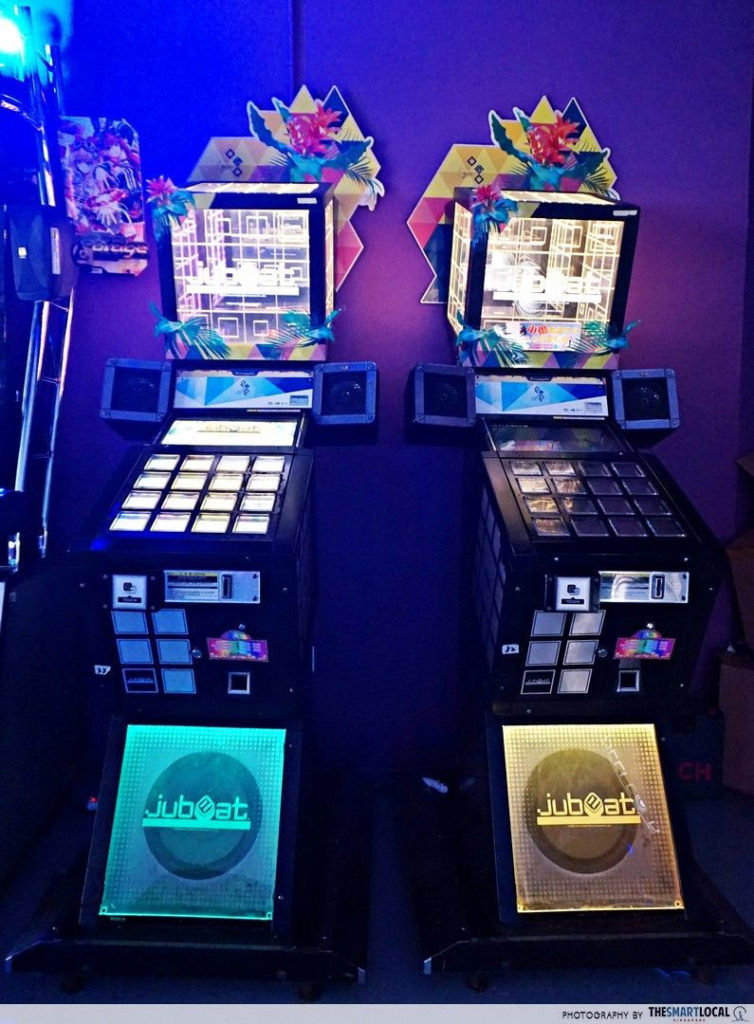 Jubeat is essentially Dance Dance Revolution – but for your hands. The intense rhythm game came in a four-by-four grid of buttons where your hand-eye coordination is pushed to its limit, especially in harder difficulties. 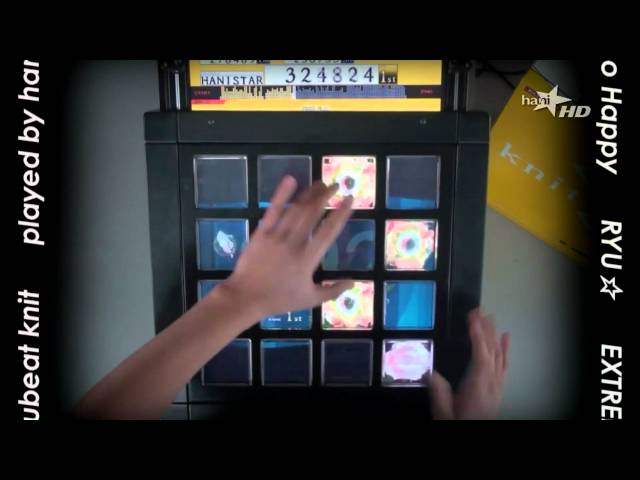 You can still find some of these machines around Singapore at arcades like Arcade Planet and Virtualand. 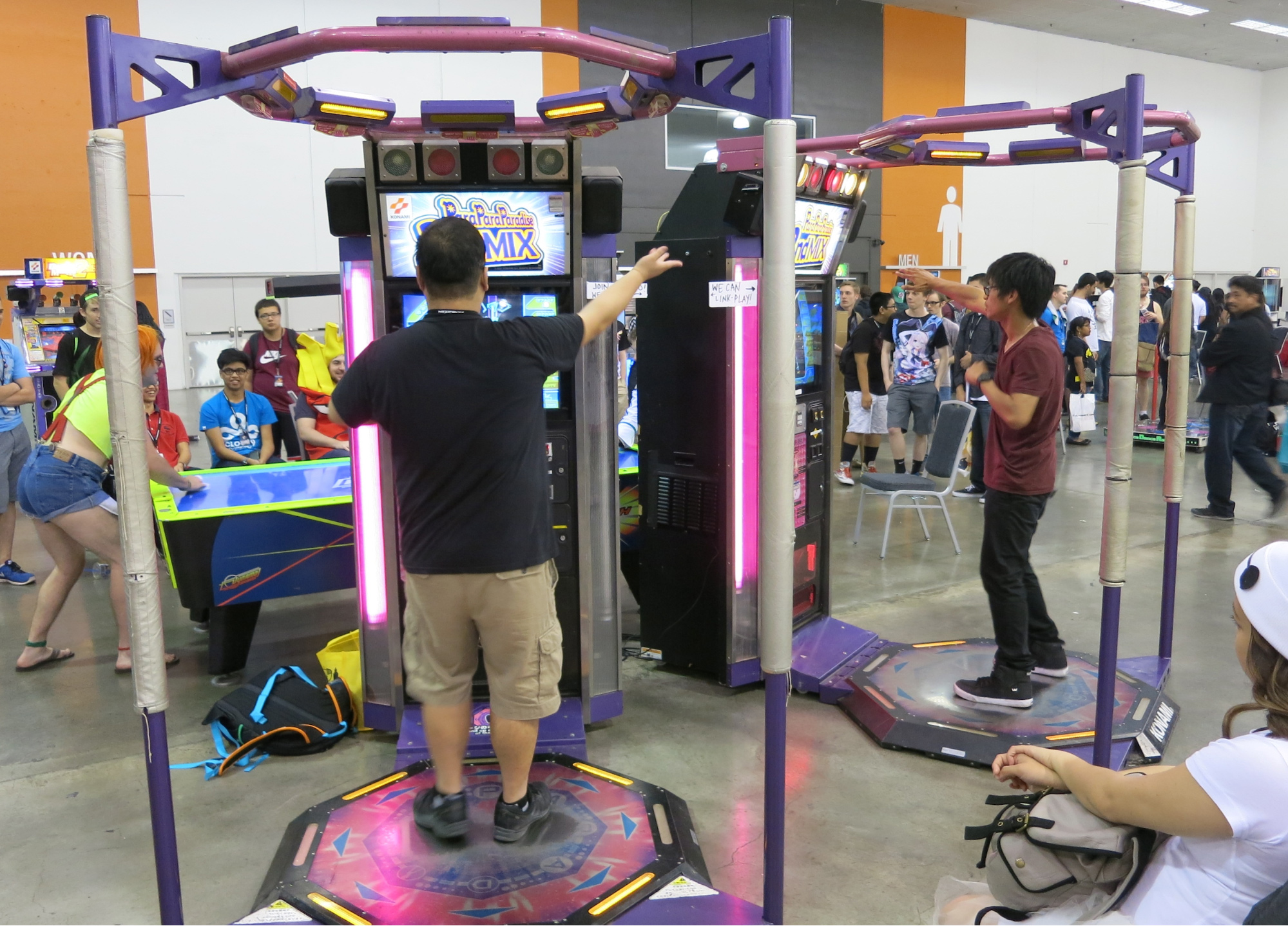 Before Just Dance was Para Para Paradise, a dance and rhythm game from Japan combined with catchy Eurobeat songs. The mini stage almost always had your resident ah lian busting out moves with her hands and feet while her clique and other kaypoh patrons stood around watching – or silently judging.

Similar games you can play: Dancerush Stardom, Push It Up

Nothing is as embarrassing as being unable to launch your pinball in front of your friends. But this retro game has not lost its lustre despite the game being a few centuries old. Perhaps it’s because pinball machines all have unique themes ranging from Indiana Jones to a Supreme one, making each playthrough with different machines a distinct game.

There are even some people who avidly collect these machines. Makeup guru Jeffree Star has an entire room full of the machines from vintage ones to modern models. 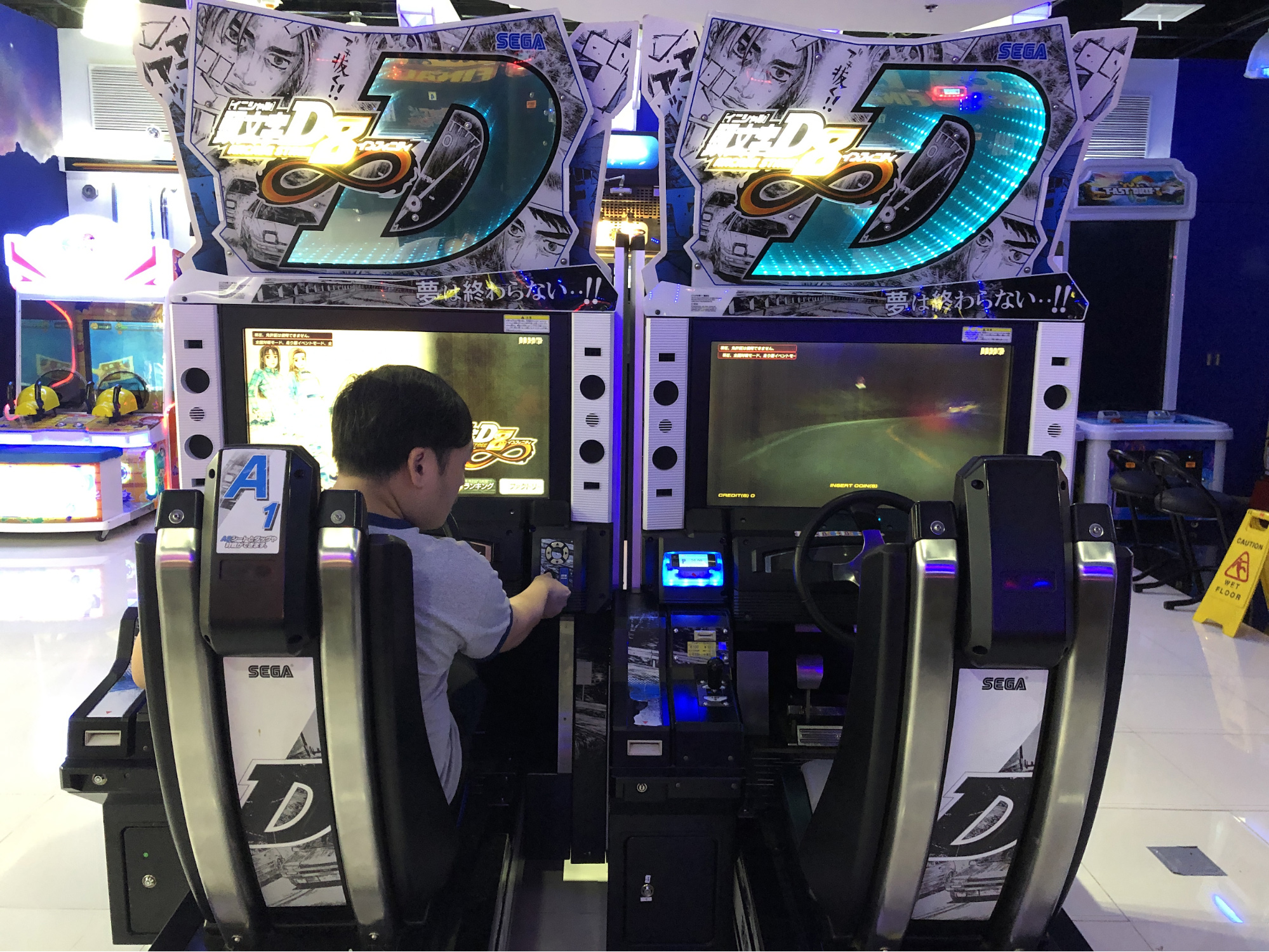 When it comes to racing along bends and mountain passes, most of us turned to Initial D at the arcades. The game was inspired by the anime and manga series, but it was also where we could pretend we were Jay Chou in his Nissan Skyline GT-R.

It’s a newer racing game compared to the rest in this list, so its graphics and gameplay are more relevant to the 21st-century. The ability to pimp your ride and upgrade parts also made it better for those who love customisation. 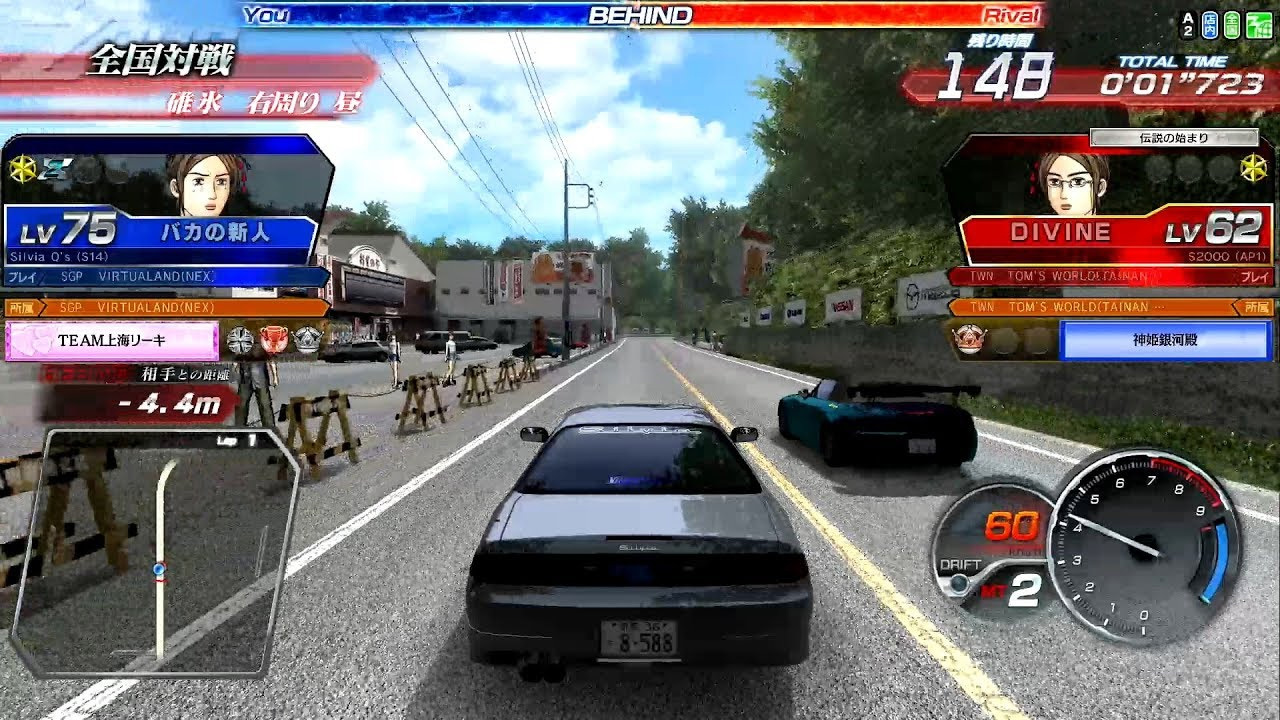 Rather than make you race with a throng of other cars, Initial D’s arcade version only pitted you against one opponent at a time so things were less chaotic. 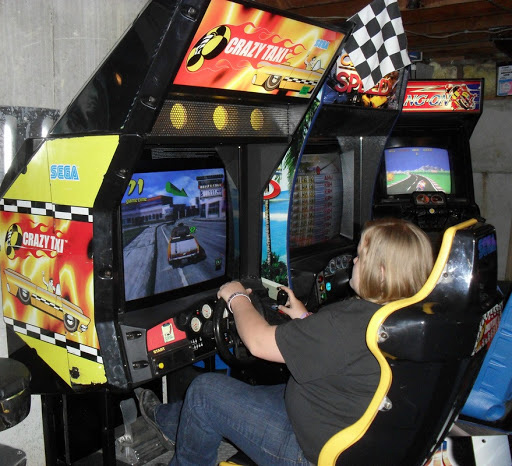 Not all driving games were made for racing. Case in point: Crazy Taxi. In the game, you’re a taxi driver with the sole ambition of delivering as many passengers to their destination in a limited time while performing crazy stunts like drifting and flying off ramps. It also introduced us to classic bands like The Offspring and Bad Religion for the soundtrack, and their music will forever be associated with the game.

Crazy Taxi was one of the few games that you could play in both the arcade as well at home on your PlayStation 2 or Xbox 360. Now, you can even play it on your iPhone and iPads if you’re yearning for some nostalgia.

Similar game you can play: The Crew 2

Nostalgic arcade games we used to play in Singapore 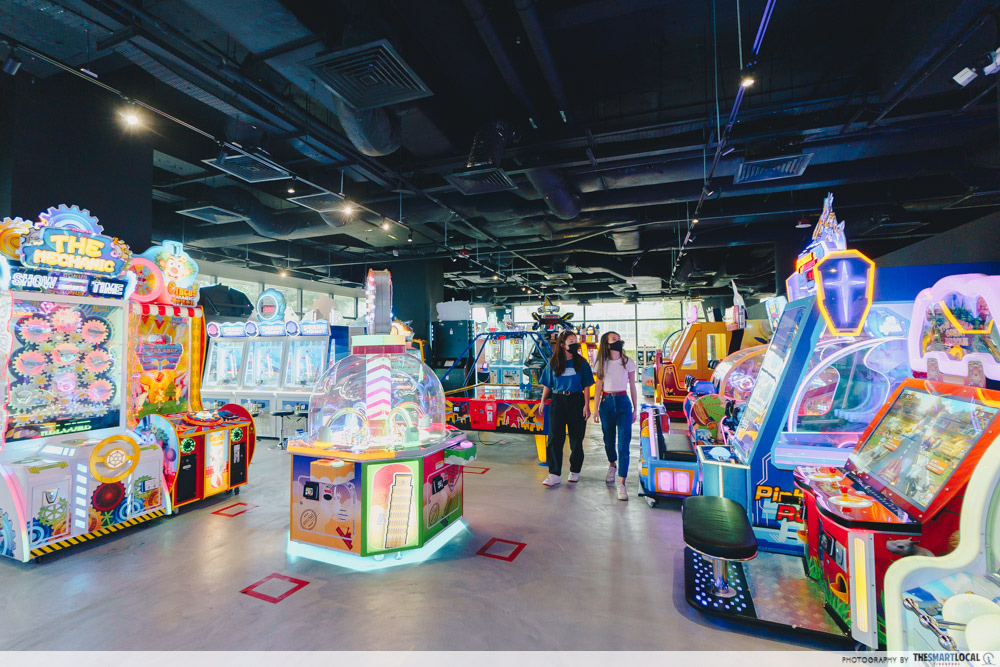 Remember when all we had to worry about was whether we could cram in all our homework after coming home late from the arcade? Those simpler days might have since past, but the many memories of afternoons spent playing video games with our friends IRL will never go away.

Nowadays modern arcade games have better tech and LED lights so new memories can be made. Even the cutesy neoprint stations have elevated to become digital photo booths so everyone can get a copy of the pictures!

More articles that 90s kids can relate to: 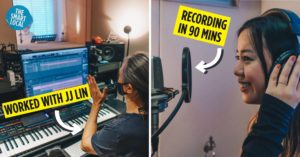 How I Went From Bathroom And KTV Singer To Pro Recording Artiste For A Day
Rails Is A New Steampunk Bar 5 Mins From Tanjong Pagar MRT With Fantastical Sci-Fi... 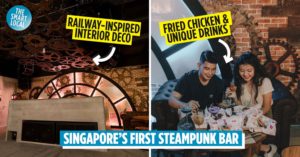