Physical contact between couples is a natural desire that helps strengthen our bonds with our partners. Due to their intimate nature, most people only engage in displays of affection in private.

A particular forest in Cao Bằng Province, Vietnam, has borne witness to some of the most affectionate acts between couples. The frequency of PDA apparently got to a point where locals have resorted to putting up a sign which bans sex entirely. A hilarious reason was also added as an afterthought – to prevent trees from ‘harm’.

Here’s how one bright yellow sign’s appearance in a forest may just change the lives of trees residing there forever.

Last Friday, Facebook user Nguyễn Thùy Linh took to Phòng Thú Tội BEATVN – a private confession page where people share stories with strangers – to post pictures that she, in her own words, “thought were Photoshopped until [she] went there to see for herself.”

The photos depict a bright yellow sign pinned on a tree. On it, handwritten texts read, “No lếu lều allowed.” For context, lếu lều is a local slang to quirkily refer to having intercourse.

The sign comes with a hand-drawn diagram of the banned act. Underneath it is a message written in smaller font that says, “Sorry brothers. These acts harm the trees, so I’m banning them all.”

According to the poster, the sign was spotted in the Hà Quảng Forest in Cao Bằng Province.

Understandably, the unconventional sign and its quirky request gave netizens a good laugh. Many commented on the post to praise the sign maker’s efforts for taking the time to add a diagram.

Some were also puzzled as to why such acts could harm the trees. As commenter Đào Huy voiced his question, netizen Nguyễn Khánh Duy jokingly replied, “it hurts the trees emotionally. I’d die too if I were in that situation.”

On a more serious note, a man named Dũng Kiều theorized that perhaps it was because couples engaging in intimate activities may have trampled on sprouts and young trees, especially if they got carried away while doing their business.

While we can’t help but smile at this wacky sign, it does drive home an important point. Deforestation is a very real concern in Vietnam. Statistics from the Ministry of Agriculture and Rural Development last year, cited by Thanh Niên, claim we lose an average of 2,500 hectares of forest every year.

As such, actions need to be taken to slow down this trend. We can contribute by volunteering to participate in reforestation projects, or in the case of this sign maker, warn others not to engage in inappropriate acts in public.

That’s because our forests will always need our protection, now more than ever. 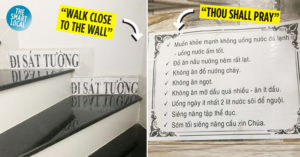 Grandma Puts Safety Signs In Her House For Family To Eat, Pray, & Walk Correctly
Grab Driver Mistakes Cat For A Dog, Circles Back To Take Pictures For His Wife 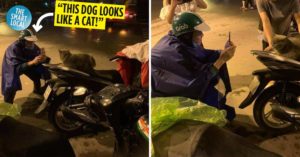