Besides the pressure to advance in their career, the pressure to get married is part of the stresses many young Vietnamese face these days. Questions about marriage, which is widely considered a compulsory part of adulthood in Vietnam, are often brought up during family reunions.

In a photo that was posted a year ago and has recently surfaced and gone viral, a Vietnamese man is seen standing beside a huge banner with his mom’s advertisement seeking a daughter-in-law.

Mom searches for future daughter in law with a banner 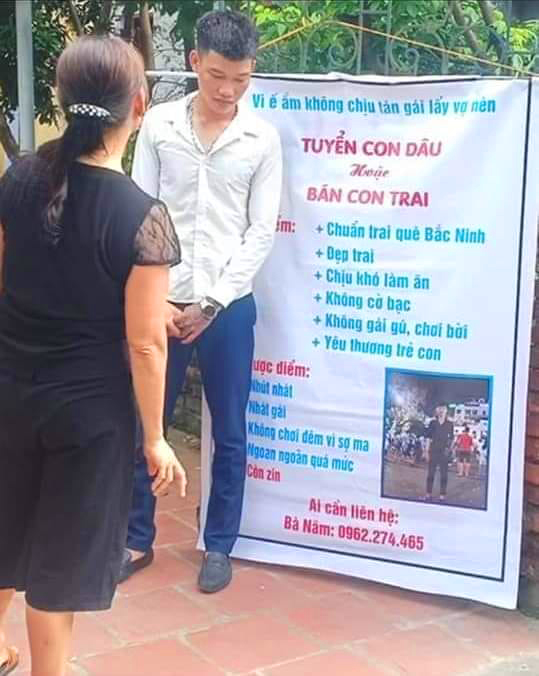 In a photo posted by user Wálenkür Nguyễn on the group Vietnam is Awesome on 21st January, a young man was captured alongside a banner advertising himself and ending with a hopeful request for a future life partner.

By the looks of it, the advertisement was written by the young man’s mother.

The advertisement opens with the author’s rationale behind her public search for a daughter-in-law, which comes from her son’s hesitancy to court girls.

The rationale is followed by a line that states her main goal, which says “Searching For Daughter In Law Or Selling My Son”. The advertisement also gives a brief description of the son’s supposed strengths and weaknesses.

According to the description, the man is from Bac Ninh, a northern province 30KM from Hanoi. The banner praises him as  a handsome and hardworking man who loves children and does not like gambling or playing the field. His weaknesses, according to the banner, include his shyness, submissiveness, and fear of ghosts.

The cherry on the cake is the final line that says that he is still a virgin, which is included in the list of his supposed weaknesses.

The description ends with the name of his mom who is reportedly the creator of the banner, and her contact number for anyone who is interested in knowing more.

It’s uncertain whether this banner is put up by a young man pulling a prank on his mom or a real advertisement put up by the concerned mom, but the photo has garnered a lot of attention from netizens.


While the photo was shared about a year ago, it is still relatable as the Vietnamese Lunar New Year holiday is drawing near and the pressure of bringing one’s significant other home is real.

“His virginity should be counted as a strength instead of weakness.” Facebook user Phạm Đồng joked. 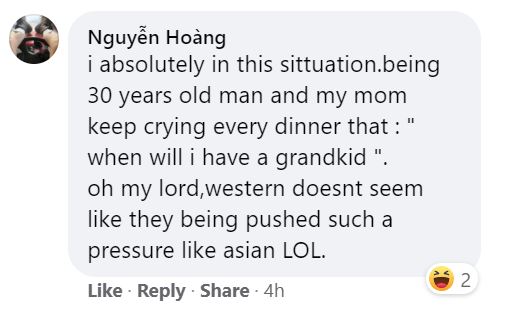 Facebook user Nguyễn Hoàng expressed his sympathy for the man’s predicament, “I am absolutely in this situation, being a 30-year-old man. At every dinner, my mom keeps crying and asking me “When will I have a grandkid?”. Oh my Lord, Westerners don’t seem to have this kind of pressure like Asian[s do].” 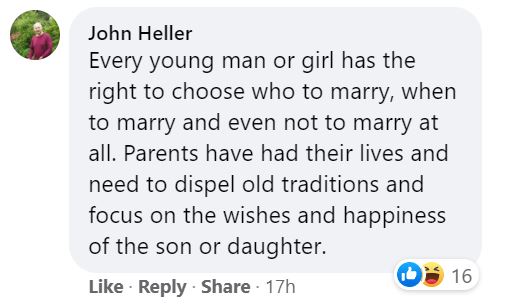 “Every young man or girl has the right to choose who to marry, when to marry and even not to marry at all. Parents have had their lives and need to dispel old traditions and focus on the wishes and happiness of the son or daughter,” John Heller, a group member living in Britain, offered his point of view on the matter, which gained approval from other netizens.

Mom searches for daughter in law with an advertisement

According to traditional Vietnamese beliefs, children must heed their parents’ advice in matters of marriage. Open defiance is seen as disrespect for elders and usually results in unnecessary frustration and tension among family members.

While it is understandable that all parents wish to take care of their grandchildren and watch them grow while they still can, they should not force marriage-related decisions on their children.

Young people should have the freedom to decide whom and when to marry.