In any culture, a wedding is a grand occasion that marks a major milestone in any person’s life, and Vietnamese weddings are no exception. While celebrations and parties are always a memorable part of Vietnamese weddings, they’re also not to be taken lightly – with a plethora of customs and rules to be upheld by everyone involved. Understandably, it’s not uncommon for soon-to-be grooms and brides to find themselves overwhelmed.

So, whether you’ve been invited to a wedding, or are planning your own big day, here are all the Vietnamese wedding traditions and customs you need to know to make sure everything goes smoothly.

– Ceremonies of a Vietnamese wedding –

As you can probably imagine, a wedding is a grand affair that requires months of planning ahead. In Vietnam, the process is split into several ceremonies leading up to the big day. 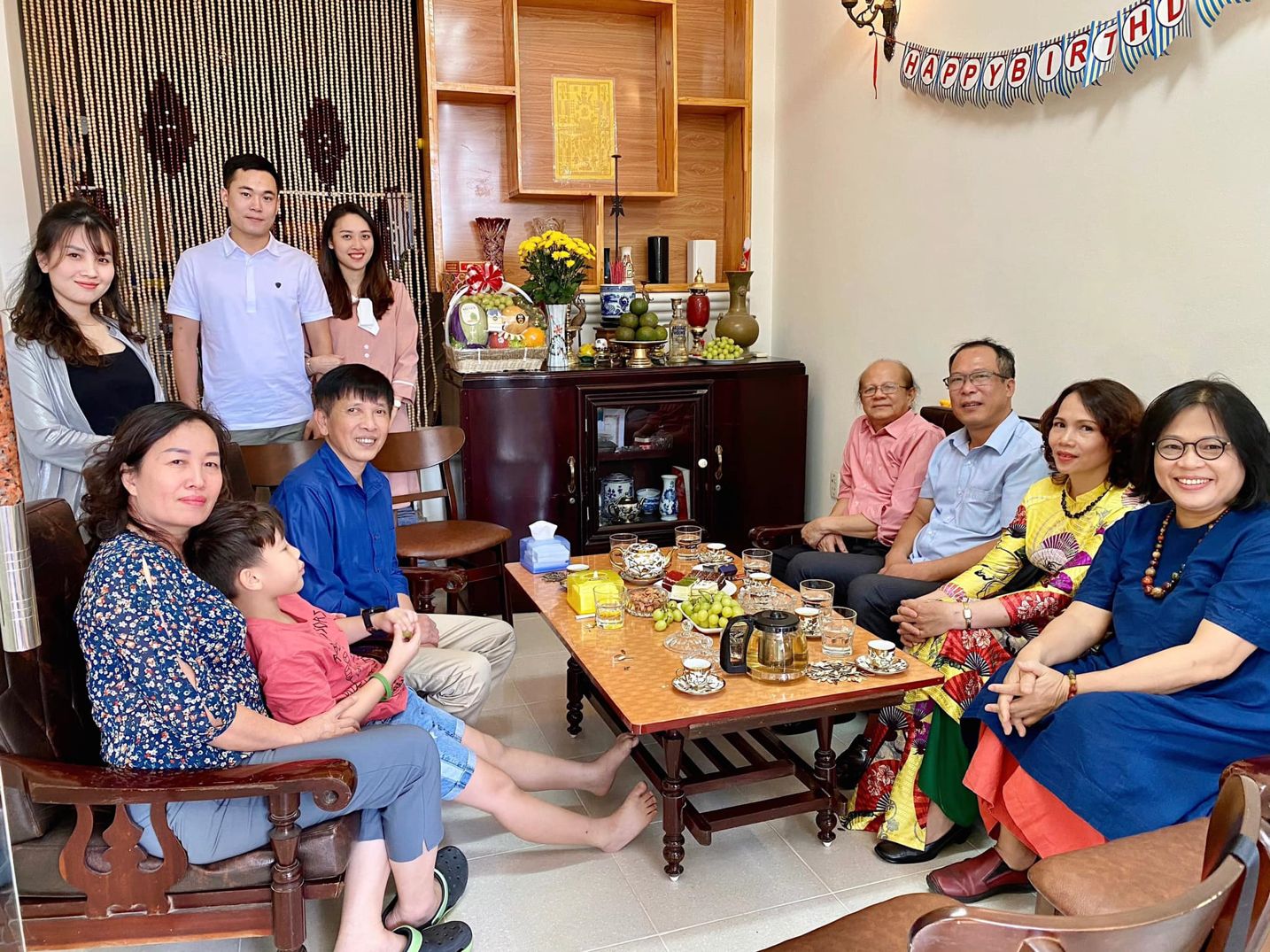 Traditionally speaking, the proposal ceremony – known in Vietnamese as lễ dạm ngõ – is when the man’s family visits the woman’s to introduce themselves, and ask for the approval of the young couple’s relationship with the aim of getting married.

The ceremony stems from ancient times when parents had absolute say in whom their children would marry. In our modern society, however, it is done after the young couple have already decided to get married and is seen as a way for the two families to officially meet and get to know their future in-laws. 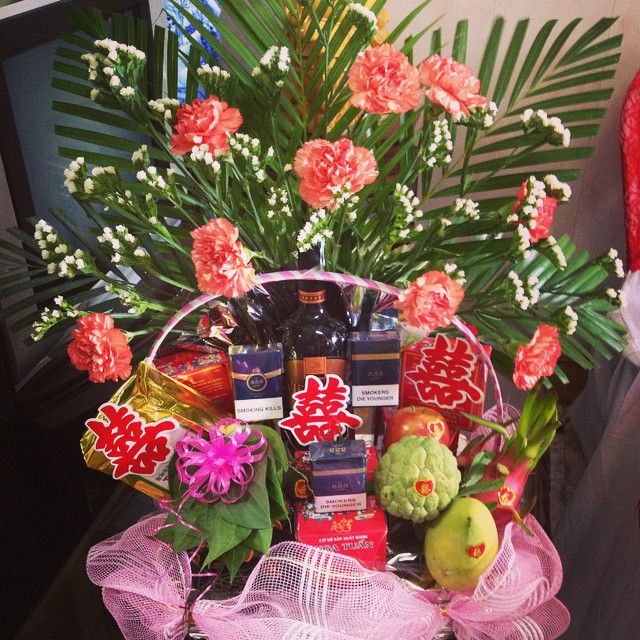 The meeting is a small one that involves only the couple’s immediate families – namely their parents and siblings. The man’s parents will bring small gifts such as betel leaves, areca nuts, tea, rice wine, and sometimes fruits and flowers, which the woman’s family use as offerings to their ancestors to let them know that their descendant is getting married.

Although this proposal ceremony is simple, it is an indispensable part of any Vietnamese wedding. Even if the two families already know each other beforehand, the man’s parents bringing gifts over for the proposal is seen as a gesture of respect. During the meeting, the two families can also discuss the next steps of the wedding. 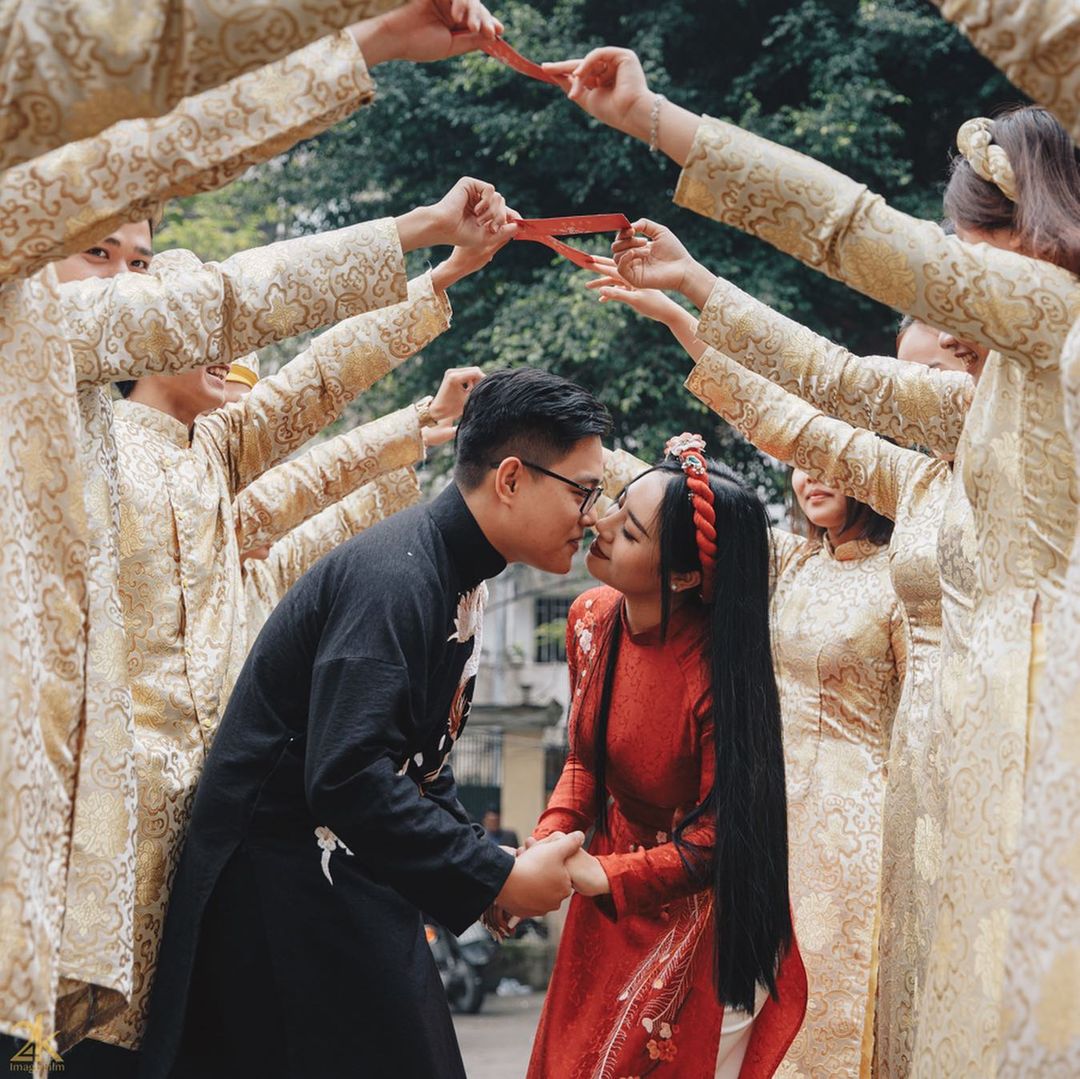 After lễ dạm ngõ comes lễ ăn hỏi, a ceremony that marks the couple’s official engagement. It used to take place several months prior to the wedding, but the timing is more flexible nowadays as more people are inclined to reduce the scope of or combine several customs together. It is not uncommon for modern engagement ceremonies to be held only a few days before the wedding.

In any case, the date of the lễ ăn hỏi ceremony is chosen by a fortune teller based on the couple’s birthdays on the lunar calendar, as it’s believed to bring good luck. On this day, the groom’s family prepares trays of gifts such as betel leaves, areca nuts, tea, traditional cakes, rice wine, and sometimes sticky rice and roasted pigs. In the old day, the amount of gifts prepared showed how much the groom’s family valued their new bride and was also a way to flaunt their wealth, but again, today it is more of a formality and is often agreed upon by both families beforehand. 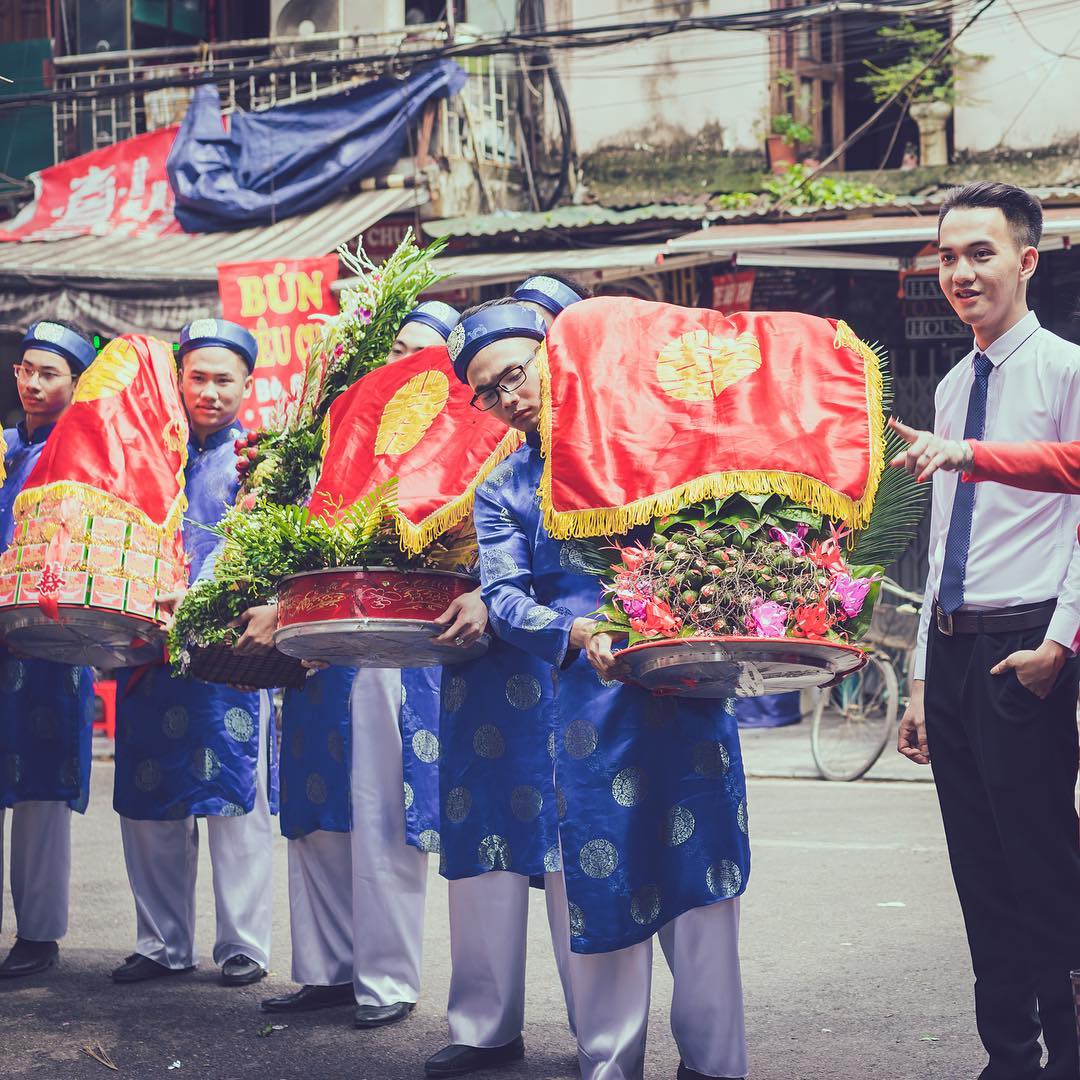 The gift trays are carried by unmarried young men chosen from among the groom’s friends and relatives. Likewise, the bride will also ask her unmarried female friends and relatives to become her gift receivers. As the groom’s family brings offerings to the bride’s house, the gift receivers join hands with the gift carriers, and together they bring the gift trays to the ancestor altar, where the betrothed couple pray and ask for their ancestors’ blessings.

As the engagement ceremony is a major occasion in preparation for the wedding, participants are required to dress formally – men in suits and ties and women in the traditional Vietnamese áo dài. Alternatively, the groom and gift bearers can opt to wear the male version of áo dài as well.

The wedding day is the culmination of several months’ worth of preparation. Again, the two families will have consulted a fortune teller to decide on a lucky date, and the ceremony involves several steps.

3.1. Lễ vu quy – a ceremony to ask the bride’s family to give her away 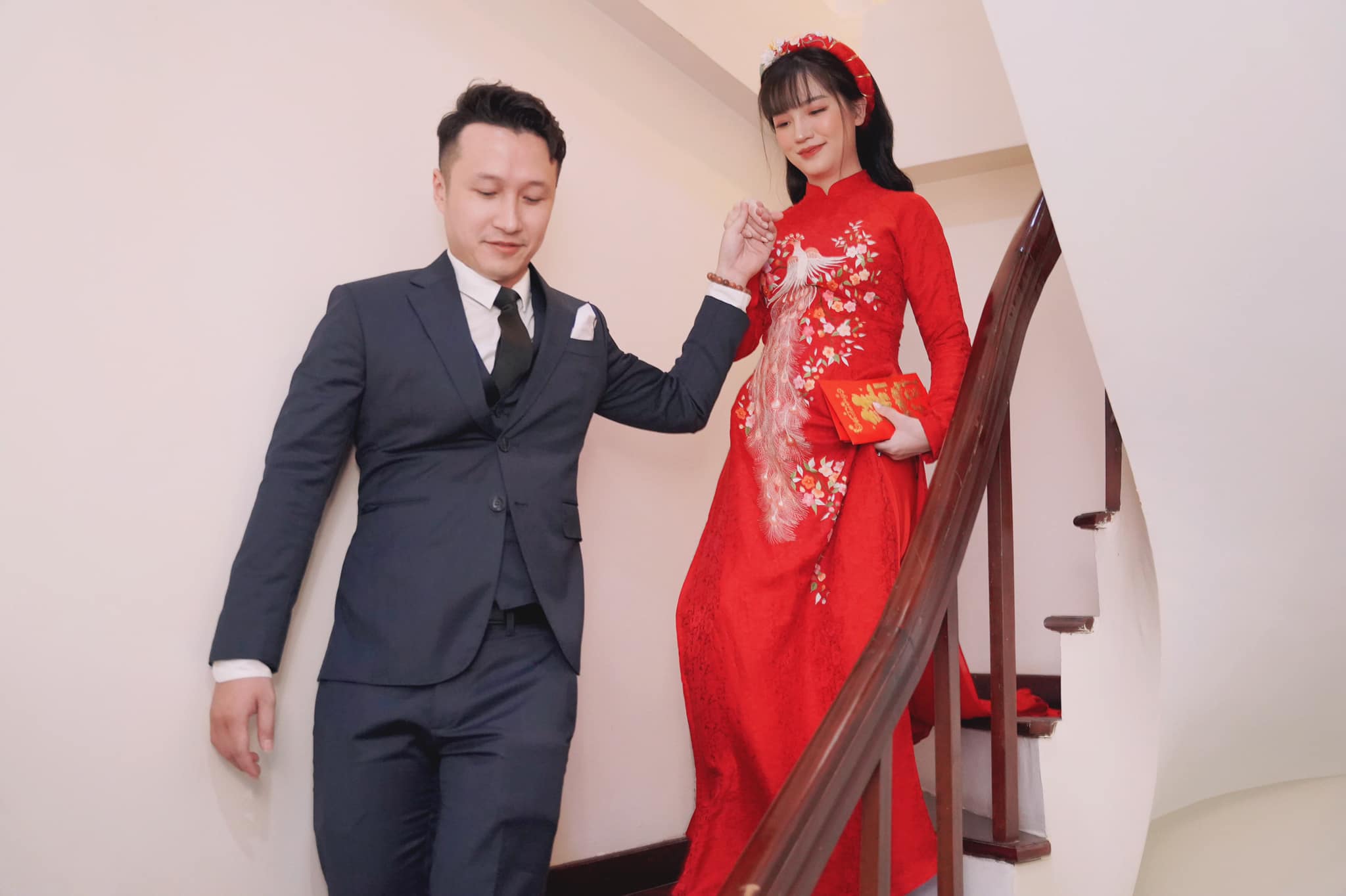 A groom bringing his bride down from her room after obtaining permission from her family
Image credit: Rina Chan

After obtaining permission from the bride’s family, the groom is then allowed to enter her room and bring her out. The couple will then proceed to pray at the bride’s family altar and serve tea to each other’s family elders as a sign of respect. 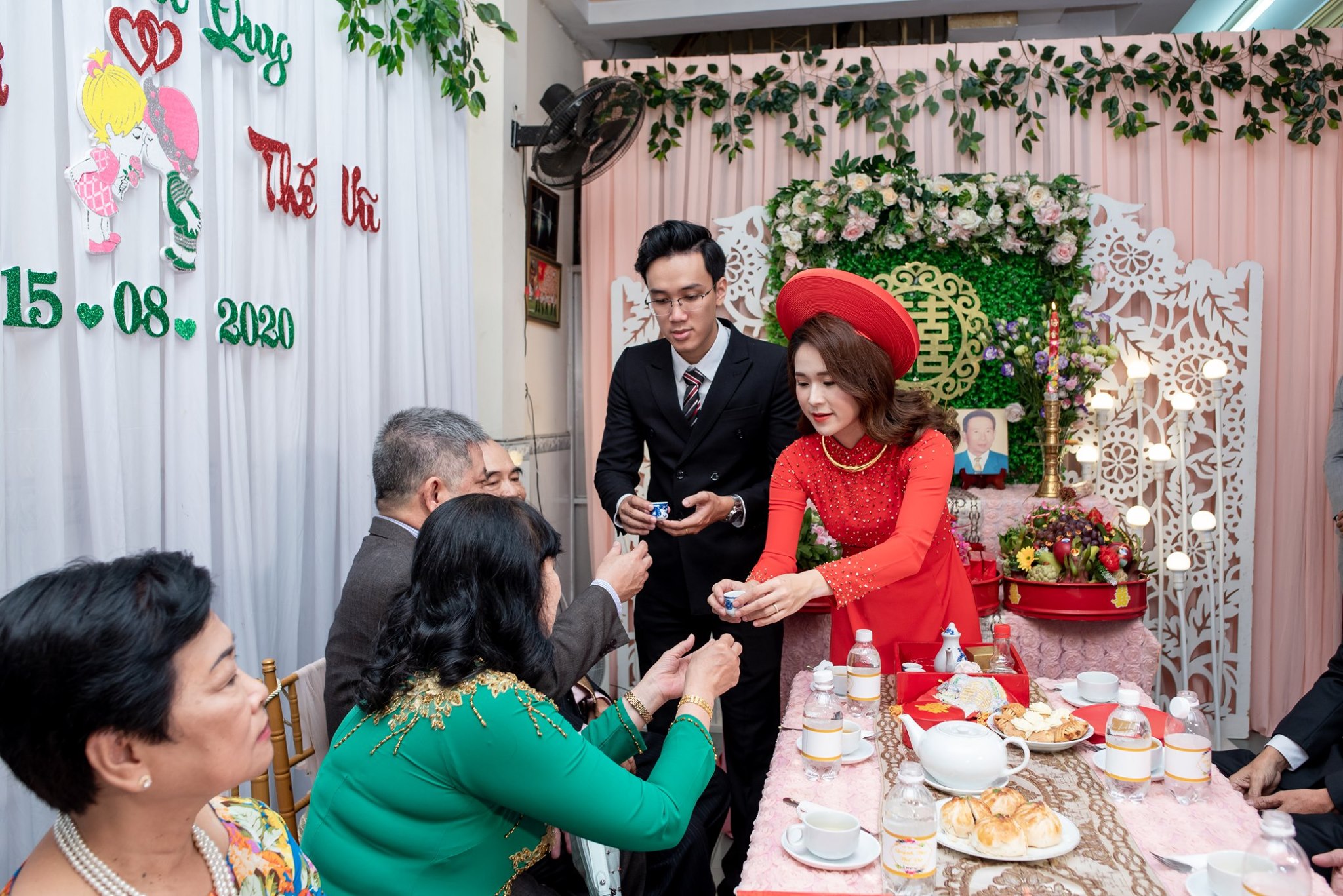 The couple will then sit down to receive marriage advice from their elders, and this is also when the bride’s mother will gift her with gold and jewelry and send her off to her new home.

After the ceremony, the bride is considered to have joined the groom’s family, and she will follow her soon-to-be husband to his house to proceed with the next step: lễ thành hôn – the official wedding ceremony. 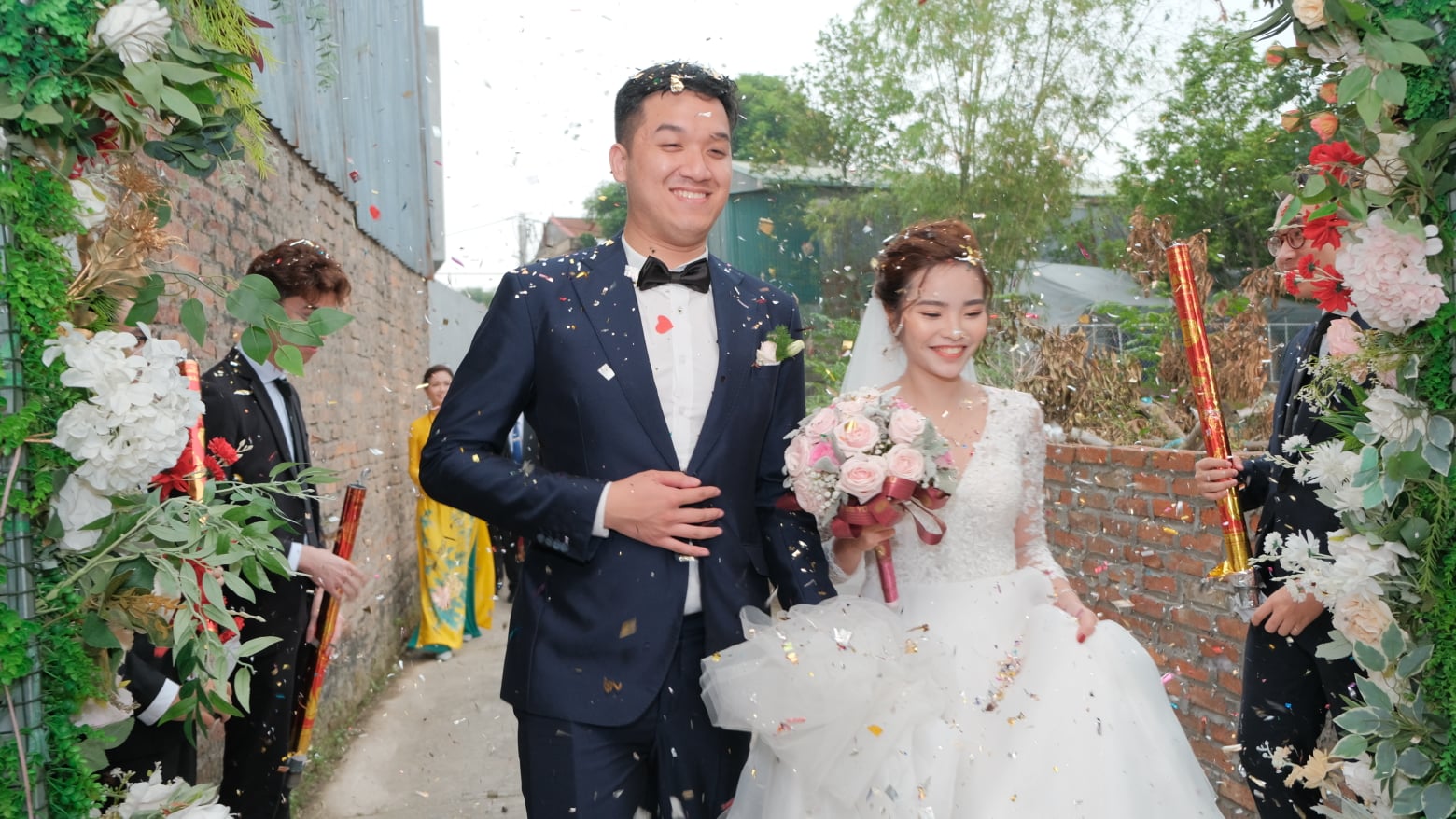 A couple arriving at the groom’s house on their wedding day
Image credit: Đỗ Xanh

At the groom’s house, the couple’s first task is again to light incense and pray at the ancestors’ altar. This act is believed to be a way of informing the groom’s ancestors that their family has just welcomed a new member.

The official wedding ceremony or lễ thành hôn then commences, when an emcee – who could be an acquaintance asked by the couple to perform the task, or a hired service provider – introduces both families to the guests, provides a brief recap of the couple’s history together, and instructs the couple to perform rituals such as exchanging wedding rings and drinking together. 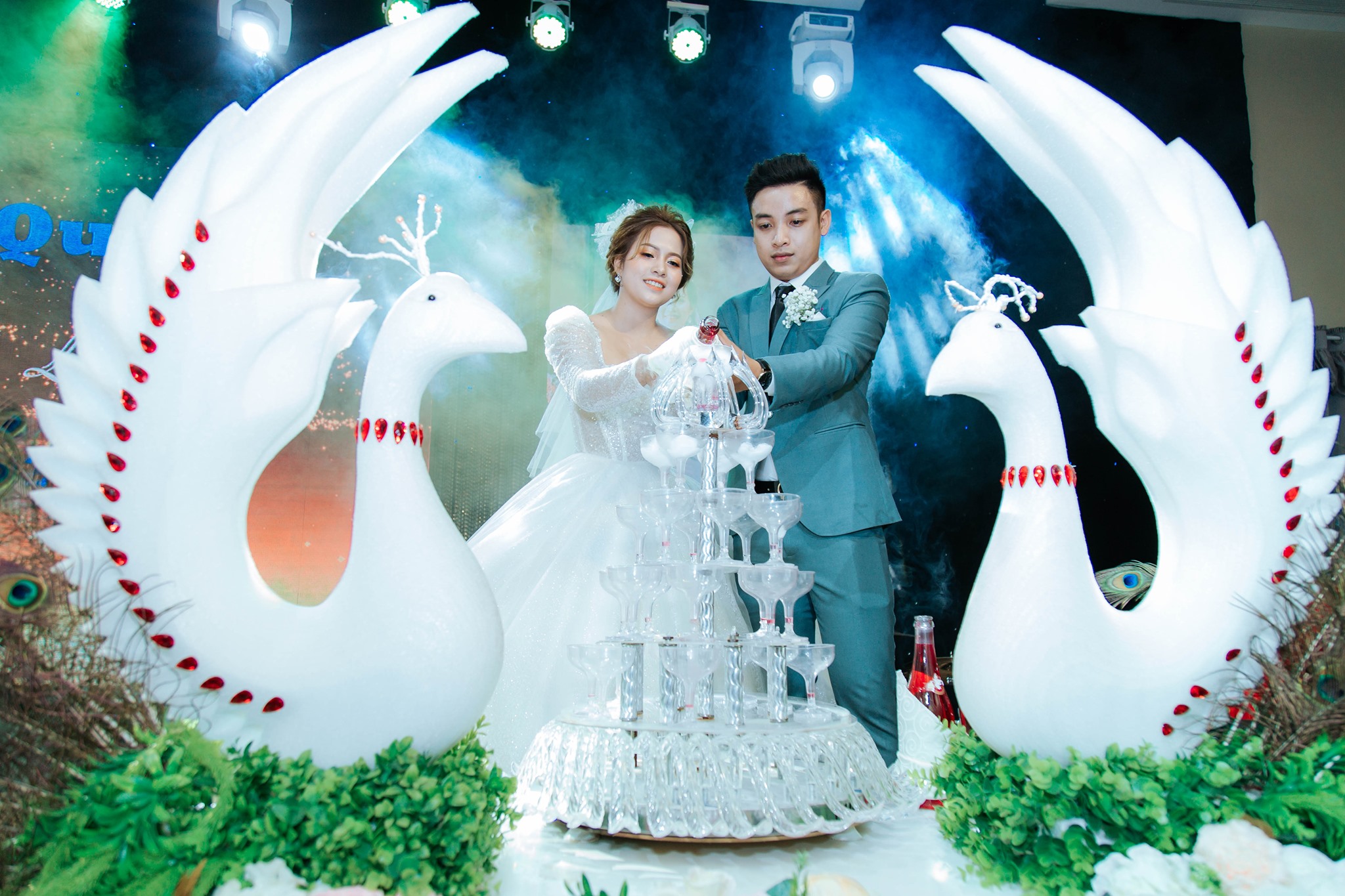 After the couple is officially announced as husband and wife, a feast is thrown to celebrate the occasion amid cheerful music, and the newlyweds will go from table to table to propose toasts and receive good wishes from guests.

– Things to know as a guest attending a Vietnamese wedding – 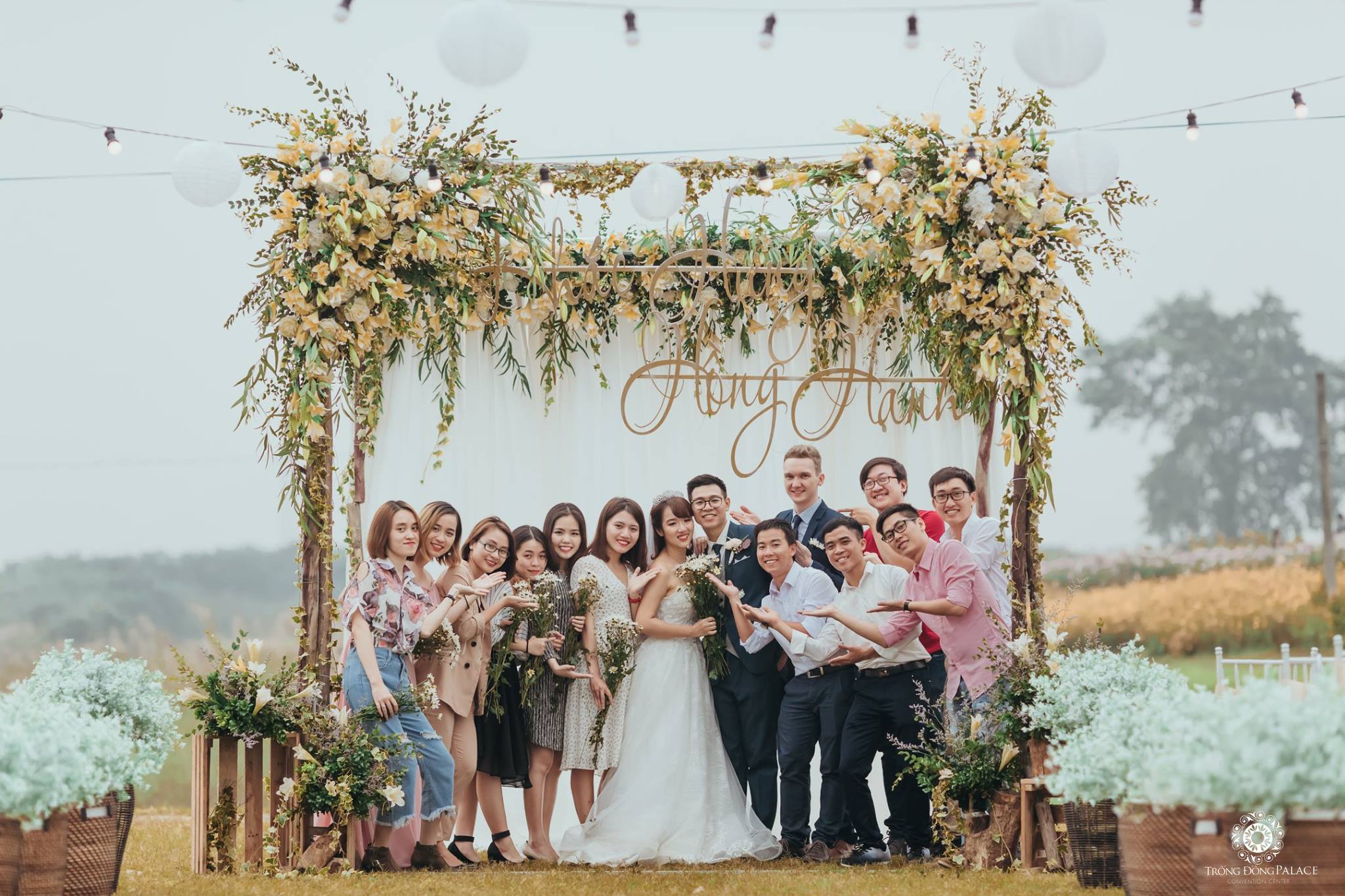 You can dress casually at a wedding, but just be sure to dress politely
Image credit: Trống Đồng Palace

If you’re invited to a Vietnamese wedding but are not familiar with the traditions and customs, the first question you probably have is, “How should I dress for the occasion?”.

Both formal and casual clothing are fine – but the most important thing is to dress conservatively. That means no shorts and sleeveless shirts, and even short-sleeved shirts are best avoided. It is not uncommon for men to wear a suit while attending a Vietnamese wedding, but women usually don’t wear formal áo dài unless they are the couple’s mothers or older relatives.

2. Bring gifts to the newlyweds 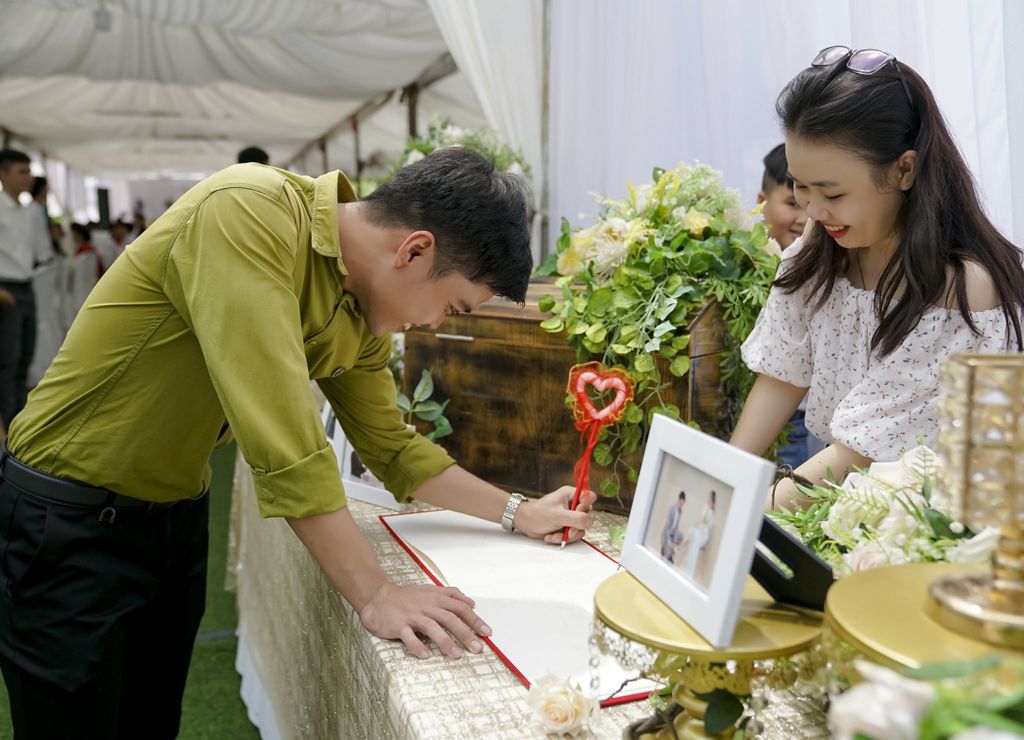 A man writing wishes to the newlyweds at a wedding reception
Image credit: Nhà hàng tiệc cưới The Venus

On paper, you are not explicitly asked to bring gifts while attending a wedding, but it is kind of an unspoken rule that you do.

The most common gift is money, which is placed inside envelopes to not appear too pretentious. The average amount is usually VND500,000 (~USD21.59), but you can choose to give more or less depending on your financial situation and how well you know the newlyweds. 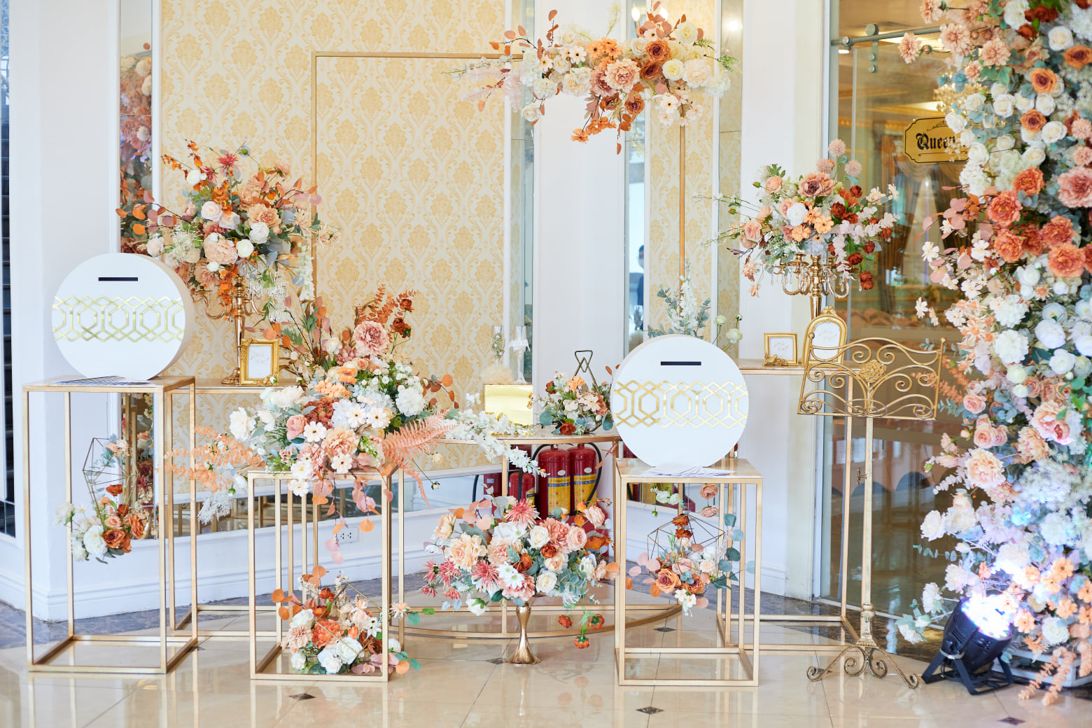 You can find money boxes and envelopes at the reception
Image credit:Trống Đồng Palace

You can prepare your own envelope at home, but if you somehow are unable to, there will be empty envelopes next to the money boxes at the wedding’s reception for you to put your money in. Do take care not to let other people see how much you put in the envelope, as money can be a sensitive topic in Vietnam.

3. Let the couple know in advance if you bring someone along 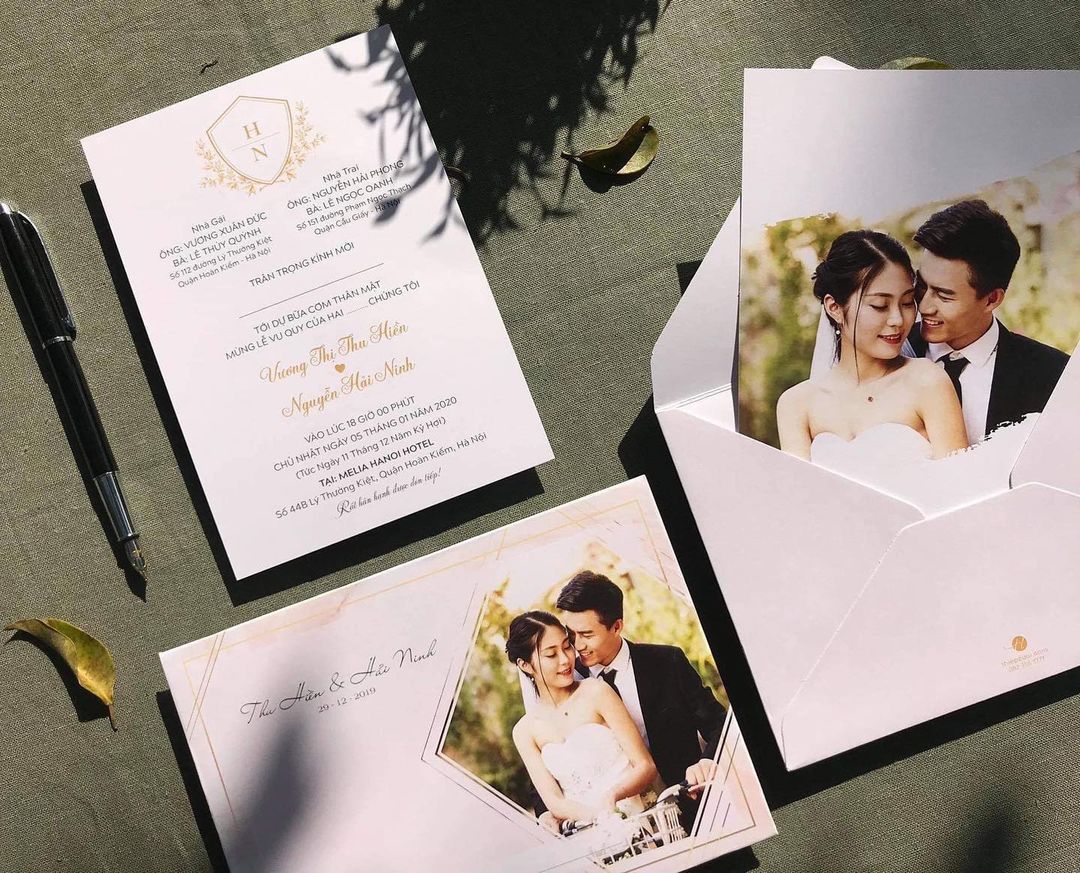 Most often when you receive an invitation card to a wedding, it’ll explicitly invite “you”, “you and your family”, or “you and your loved one”. However, if you want to bring, say, your partner who isn’t invited – this can happen if the newlywed couple don’t know your partner – it’s recommended that you let them know first.

After all, preparing for a wedding that can involve hundreds of guests is a daunting task, so do your part to let the groom and bride know how many people will be present so as not to catch them by surprise.

4. Avoid attending if one of your family members just passed away

In Vietnam, it is believed that if you just lose a family member, you should avoid joyous occasions such as weddings so as not to bring bad luck to the hosts. In the past, people would wait at least a year following the passing of a family member before they attended a wedding.

The rules are less strict today and you don’t have to wait that long, but if you just attended a funeral in the past couple of months, you should still call the couple to let them know and apologise for your absence. It might sound a bit excessive, but if you look at it from another angle, it’s just another way to show respect and consideration toward the hosts on their big day.

5. Send gifts if you’re unable to make it 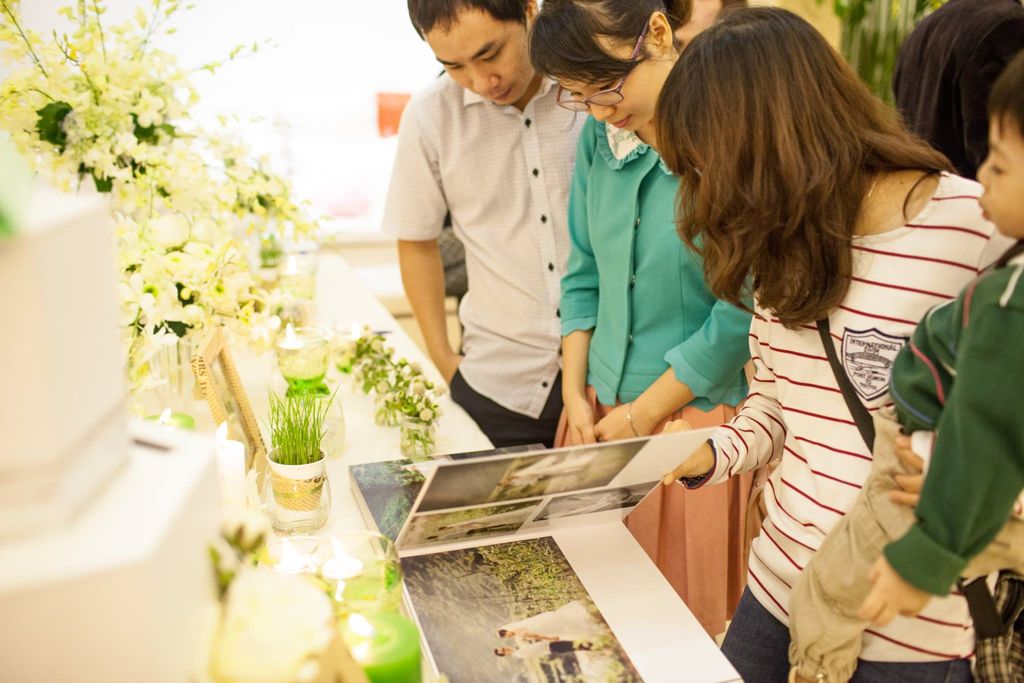 If you can’t be at the wedding, ask someone else to deliver an envelope in your name
Image credit: Trống Đồng Palace

If you are invited to someone’s wedding but can’t make it for whatever reason, call them and let them know.

In this case, you’ll still be expected to send a gift. Again, the most common way to do so is to prepare an envelope of money with your name on it and ask a mutual acquaintance to put it in the money box on the day of the wedding.

The money is considered a gesture of goodwill – and something to help the newlyweds start a new life. It shows that you wish them the best even though you can’t physically be there.

6. Don’t ask questions that are too personal 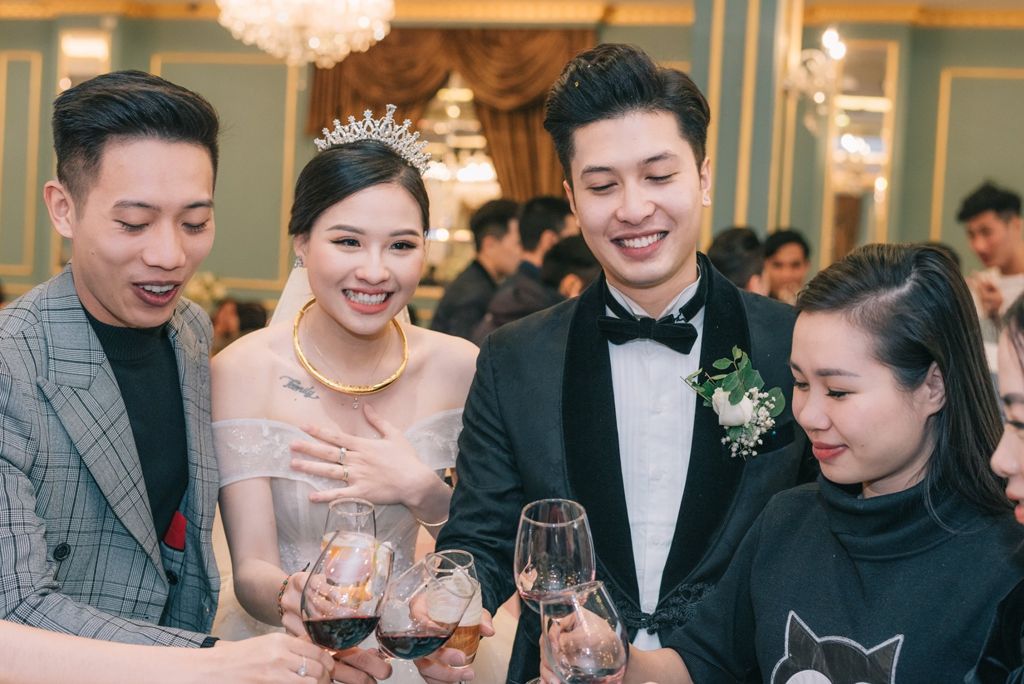 Come to share the joy and wish the newlyweds good luck, but refrain from asking questions that are too personal
Image credit: Trống Đồng Palace

Being the (sometimes overly) friendly folks that we are, we Vietnamese folks can sometimes get carried away in conversations and ask questions that go into too much detail. We might mean well, but such questions might make the bride and groom uncomfortable, yet they are still forced to answer out of courtesy.

So, do refrain from asking questions that are too personal, such as “When are you going to have a baby?” or “How much are you spending on your honeymoon?” – you get the idea. Such questions are off-limits unless you are really, really close to the marrying couple.

As society evolves, so do traditions, and many wedding customs deemed unfit for the modern age have been removed or replaced. At its core, though, a wedding is still a sacred ceremony that binds not only two people, but also two families.

Yes, all the rules and rituals can be tiresome at times, but they are done in hopes that the newlyweds will have a happy, fulfilling life together, and witnessing them is a way to be part of their lives and convey your best hopes for their future. 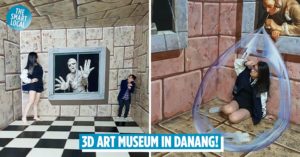 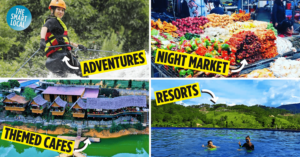