It’s safe to say that 2020 has left many of us traumatised, and from the looks of things, 2021 seems to be no different. But for all its downs, 2021 has had its ups as well. We’ve rounded up some of the good deeds and wholesome stories in 2021 for a dose of hope to brighten up your day. Don’t be disgruntled – there’s still hope for 2021 to surpass its predecessor. Sit back, grab some cookies and enjoy this large cup of positivi-tea. Image for illustration only

It’s natural to be upset when you lose a phone. After all, smartphones these days cost around a grand a pop, and probably are our only means of communication with family and friends when we’re out and about. In one unique case, a Facebook user, Eddie Dieana, was with his friends in Changi when a visibly distraught man asked him about a missing phone. With some probing, it was discovered that the lost phone had been a gift from the man’s late mother. And beyond sentimental value, the phone also contained photos of his later mother along with voice messages from the past – the man’s only remaining memories of her.

It warms all our hearts to know that the phone eventually found its way back to its owner, thanks to the help of this kind Samaritan and a security guard on duty that day. Our takeaway: appreciate your loved ones while they’re still around, because one day, it might just be too late. There’s nothing quite like the joy of seeing the digits in your bank account rise during the year-end bonus handout, especially if the bonus is a hefty one – say 16 months’ worth?

Sheng Siong got itself into the spotlight earlier this year for all the good reasons. With the increase in demand for groceries during the pandemic, the company’s revenue rose by 28.9% to $327.3 million in the third quarter of 2020. And to reward their staff for working hard, the company handed out a generous 4.68 months’ worth of bonus to their part-timers and up to 16 months’ worth to their assistant managers.

Sheng Siong all for you~
Image adapted from: Reddit

Of course, there’s no promise that the same thing will happen this year but here’s the link to their job application page – just in case. In late February this year, an SBS driver went viral for looking swaggy as can be, dressed to the nines with two gold rings, a gold bracelet, two chunky glimmering necklaces, and a shiny watch. The post garnered more than 3.6K shares on the original Facebook post, alongside lots of adoration from netizens in appreciation of the driver’s unapologetically unique style.

Shortly after his first wave of fame, another video of him humbly eating cai fan at a hawker store surfaced. In the background, it could be heard that the jewellery is valued over a whopping $50,000. True or not, many commentators have decided that if not Sheng Siong, SBS would be a viable contender for their next career switch.

Sometimes the best gift you can give is your time – or if you’re in Singapore, bubble tea works just as well. During the circuit breaker, many of us homebound folks sent our friends the boba-filled elixir to brighten up their day. It seems the same act of giving was taken to the next level in February by two folks serving SHN. 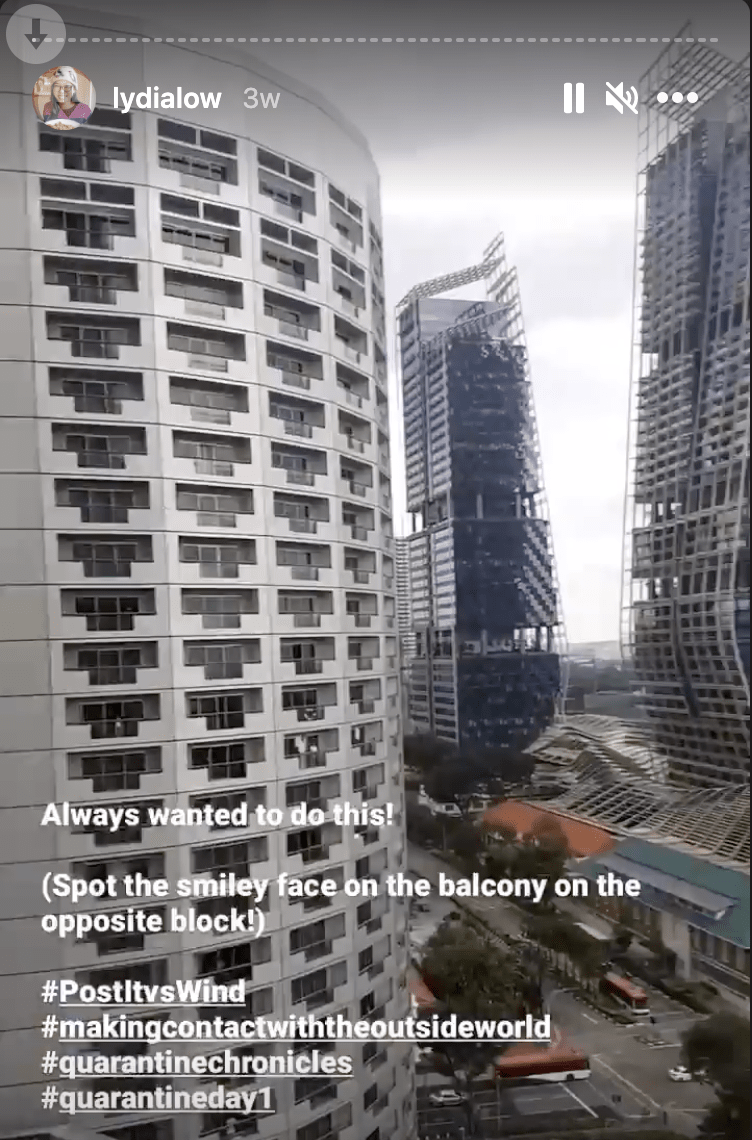 IG user Lydia Low was on her first day of quarantine in Swissôtel The Stamford Hotel when she spotted a friendly smiley face made out of Post-It notes on a window of the opposite Fairmont Hotel. 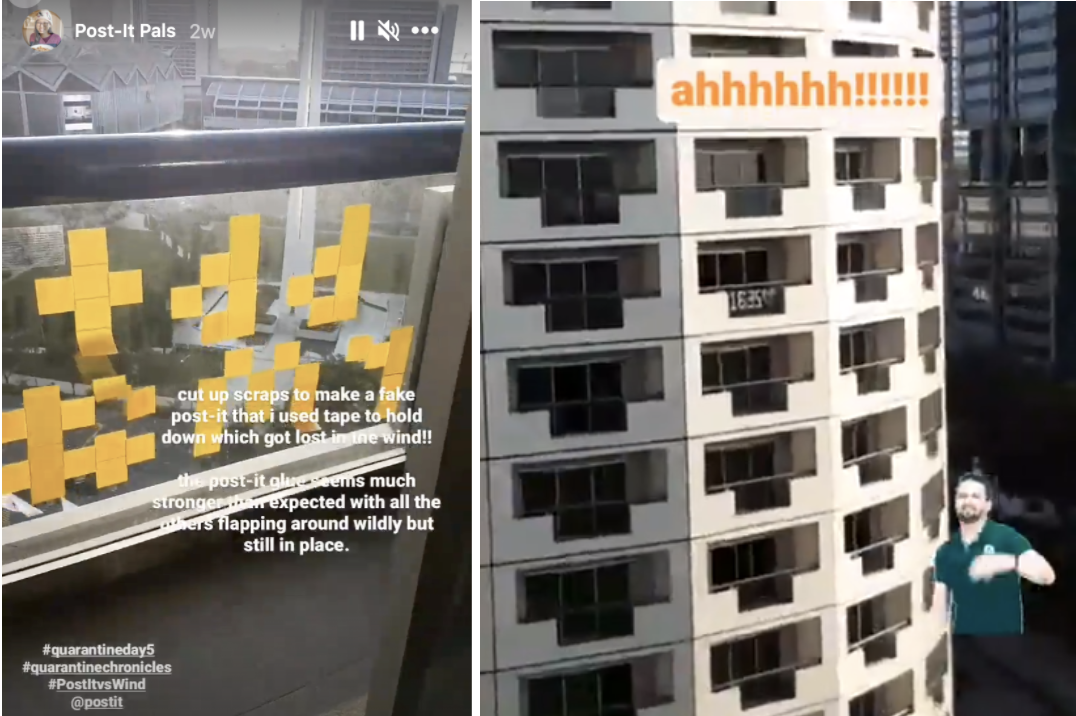 She replied with a “Hi!” and a quirky Post-It mediated conversation ensued, leading to Lydia forming the short text “bbt? rm #” to ask if her neighbours wanted some bubble tea. And just like that, two strangers became friends over the exchange of some Post-Its, two KOIs and some Playmade. Truly, what more wholesome way is there to spend a 14-day SHN in a hotel?

Read the full story on Mustsharenews.

5. Lost kid gets a hitch to school on a motorbike 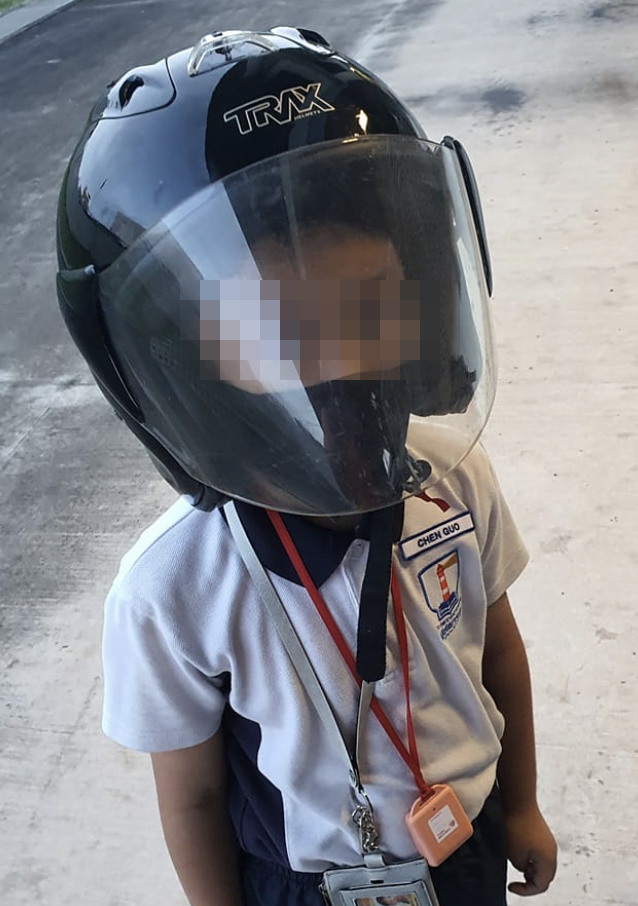 Anyone who’s gotten lost as a kid would know that losing your bearings can be a terrifying experience. Earlier this year, a young Waterway Primary School kiddo who looks no older than 10 was spotted roaming the streets of Punggol, utterly lost.

Whether he missed his stop or hopped onto the wrong bus, the experience must have been harrowing enough for the young boy to approach a nearby motorcyclist for help.

The motorcyclist, Bobby Milo, or at least the name he goes with on Facebook, popped a helmet on the little one’s head and graciously sent him safely to school on his motorbike.

Singapore is a pretty safe country, but the situation could definitely have turned awry if not for the swift intervention on a passer-by’s part. Surely, the kid’s parents must have been hugely relieved to find their little one returned to school without too much of a hitch.

From staycations to entry tickets to USS, many of us have been trying to make the most out of our $100 SingapoRediscover vouchers (SRVs). But rather than splurging on a day out, some generous Singaporeans decided to donate some of their SRVs to migrant workers through an initiative by non-profit organisation ItsRainingRaincoats. The Singapore Flyer was voted by the workers to be one of the attractions they were most interested in visiting and since the start of the year, more than 1,650 migrant workers have had their once-in-a-lifetime experience riding the national icon through this initiative.

More than 5,500 Singapore Flyer tickets have since been donated and $30,000 has been raised for the ongoing cause. If you’d like to give a migrant worker a chance to experience this city they’ve helped build, you can still purchase a Singapore Flyer ticket for donation on Klook, or donate cash directly through Ray of Hope. 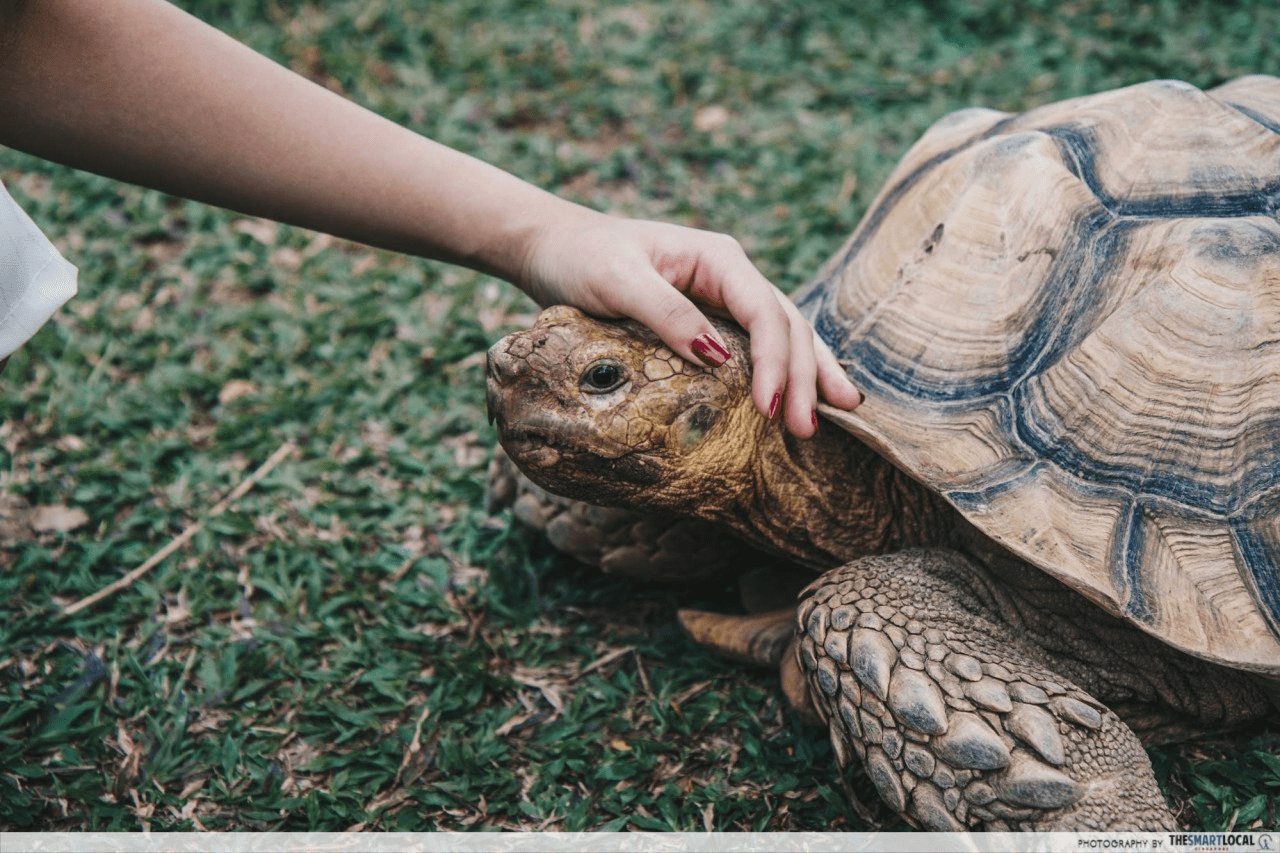 Driving at the speed of a tortoise would induce road rage among fellow drivers but things were taken on a different spin when a driver stopped to help a tortoise cross the road at Bukit Panjang. 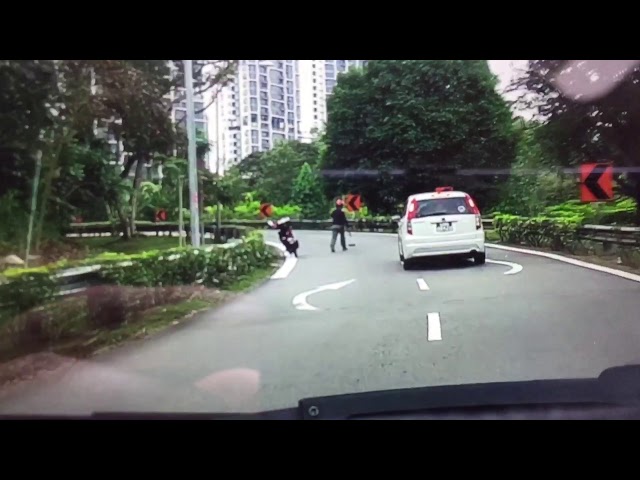 On 21st January 2021, driver Vincent Teo shared a dashcam video of a motorcyclist who had alighted from his bike to nudge a tortoise across the road to safety. He was also spotted stopping a car with a swift hand gesture to prevent the little creature from being run over.

It was a dangerous manoeuvre for sure as the motorcyclist could have been injured for pulling the stunt, but he’s since received lots of praise online for showing kindness to even the littlest of critters. 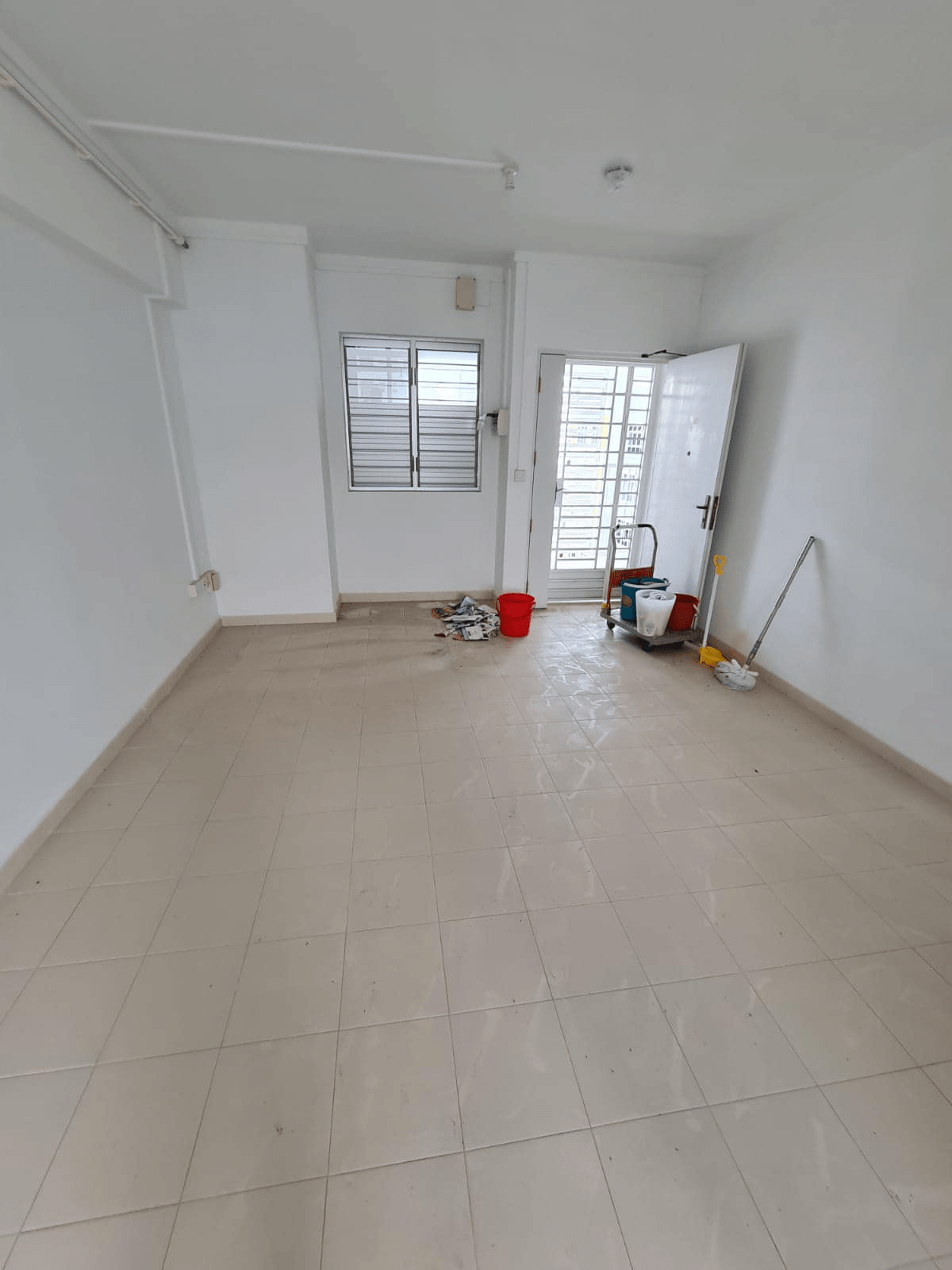 A Vietnamese mother Mdm N was thrown out of the house by her husband, with only $85 to her name, no job, and her 7-year-old daughter to care for. Things were looking pretty bad for the duo, who had to stay in a crisis shelter in Serangoon as they had no relatives in Singapore they could turn to for help.

However things took a turn for the better when they reached out to MP Sun Xueling, who with her team, consoled the distraught Mdm N, provided the two with some cash to tide them over and provided them with a temporary rental HDB flat.

As the home would just be an empty shell without so much as the barebone home essentials, Ms Sun took to Facebook to appeal to the public for donations. Items requested included a queen size bed, study table and a fridge.

This was met with an unexpected outpouring of support from Singaporeans, with more than 1,000 comments offering items on the wishlist and more. Everything they needed was covered in just 10 minutes. 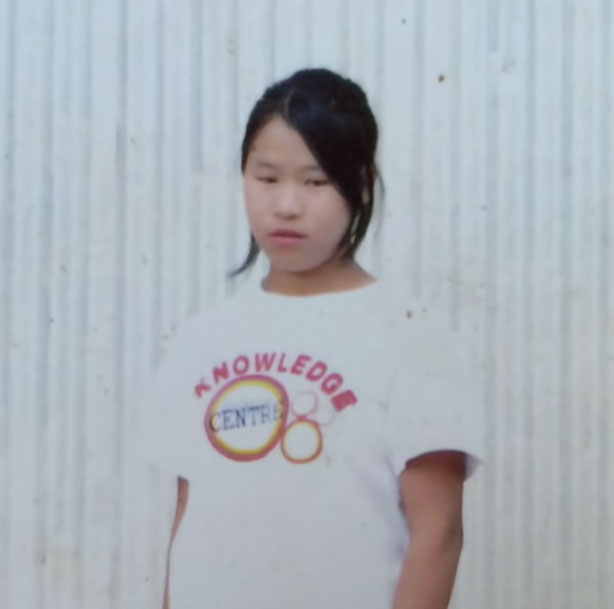 You’ve probably heard of the tragic story of Myanmar helper Piang Ngaih Don, who was abused to death – if not when the incident happened back in 2016, then this year when her employer admitted to her wrongdoings. 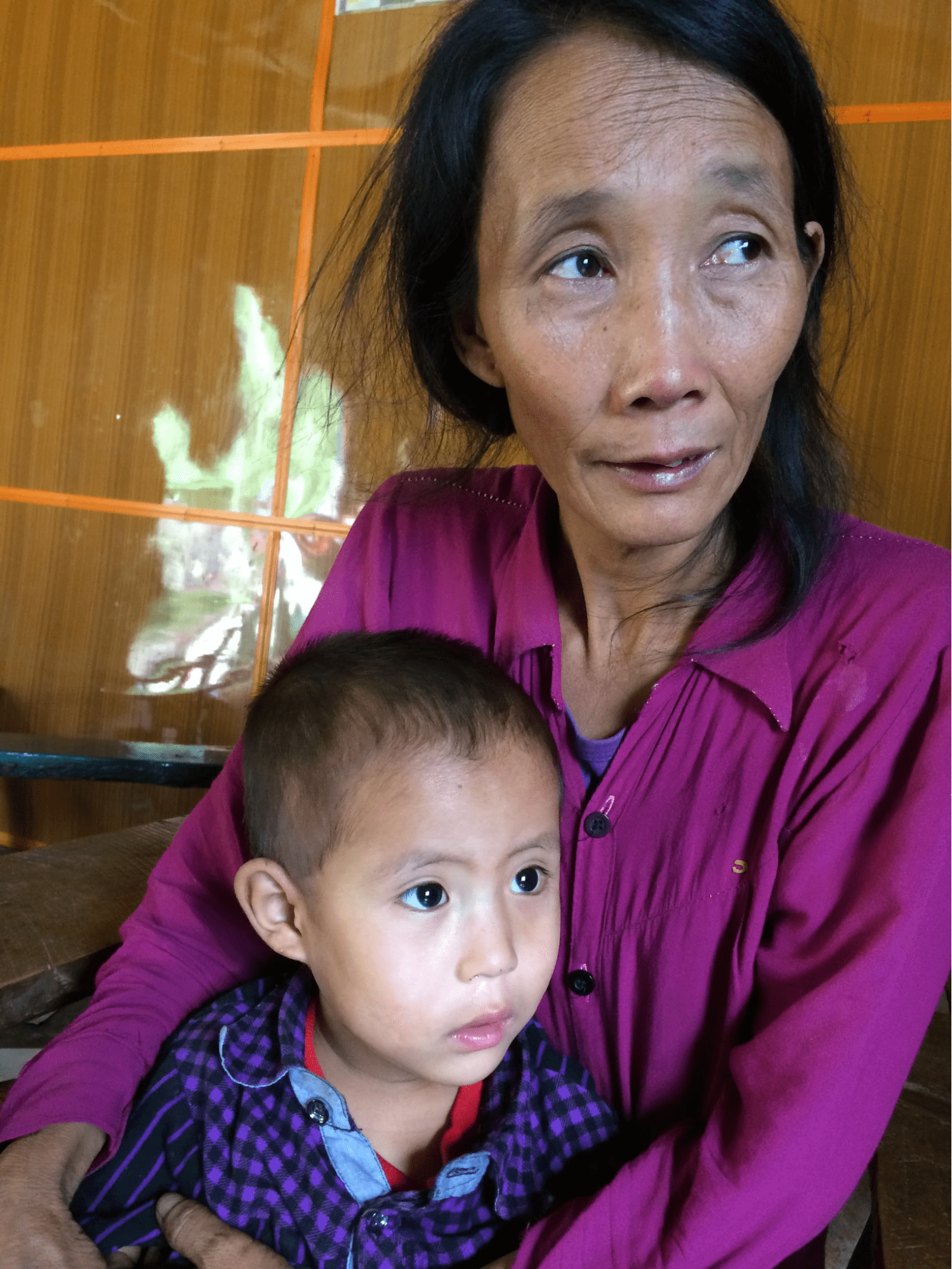 Her death in 2016 left her son in the hands of her sister, but after her ordeal was put back on the news recently, Singaporeans rallied to raise money to support the family through a fundraiser drive organised by the Humanitarian Organisation for Migration Economics (HOME).

After their Facebook post was shared on 25th February 2021, more than $200,000 was raised in six days, hopefully to guide a son to a better future and at the same time, raise awareness about domestic worker abuse in Singapore.

Donations are ongoing till 31st March 2021 and you can find out more on how to offer your support on HOME’s Facebook page. Pet owners will know that looking after furbabies isn’t cheap and even the costs of just food can add up over time. This is why cat lover Jj Chong started a mini Facebook fundraiser, to raise money to give angbaos to 10 senior cat and dog feeders in the community for Chinese New Year.

It all started when Chong noticed an elderly feeder who has been feeding cats over the last 20 odd years till the wee hours of the morning despite her health issues. Chong initially set out with the goal to gather $500 for her and other feeders as a gesture of appreciation. Little did she expect, her $500 mark was quickly overshot, with a whopping $7,089 gathered in just eight days. 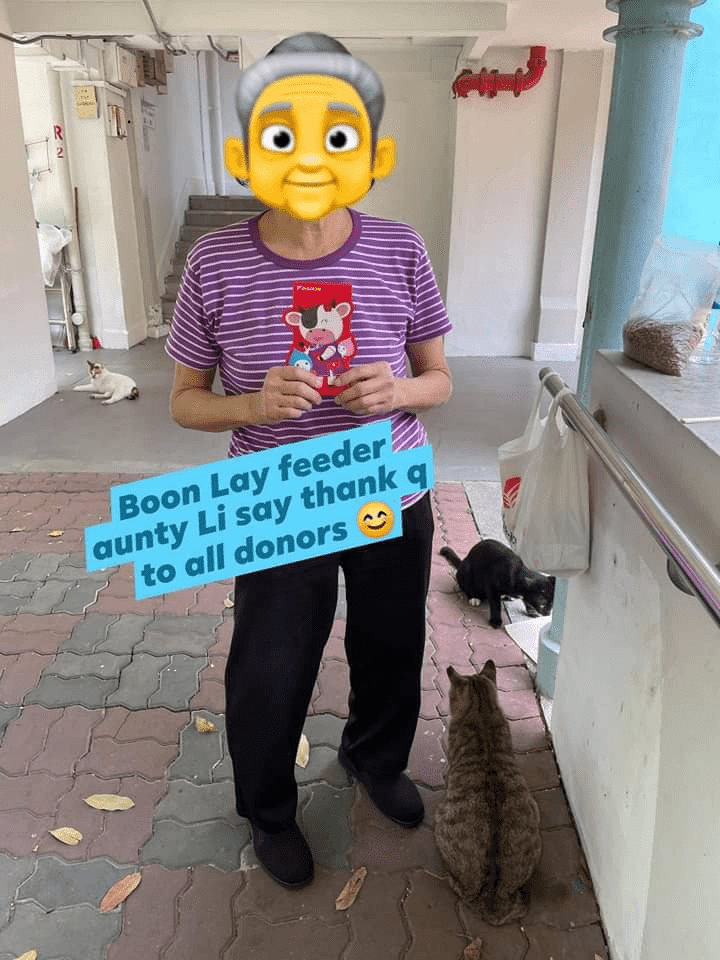 From the initial 10 feeders, her initiative reached 22 feeders in the end, each with more than $300 in their angbao – a testament that with just a little heart in our community, we can show our appreciation to those who’ve been working tirelessly behind the scenes.

With every year, we experience the good, the bad and the ugly – but it’s always important to remember that with the smallest kind gesture, you might be able to make someone’s day.

Do something good for someone this 2021 – it could be a friend, a stranger, or even a tortoise for that matter. A little goes a long way and who knows, you might just change someone’s life for the better with your next act of giving. 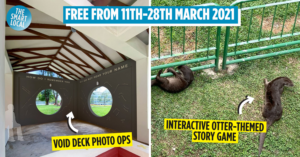 5 New Things To Do In Pasir Ris In March - Light Projections, Park Pop-Ups & Interactive Story Trails
Aftershock PC Review: We Tried Out The RAPID Gaming PC By Playing Valorant On It...