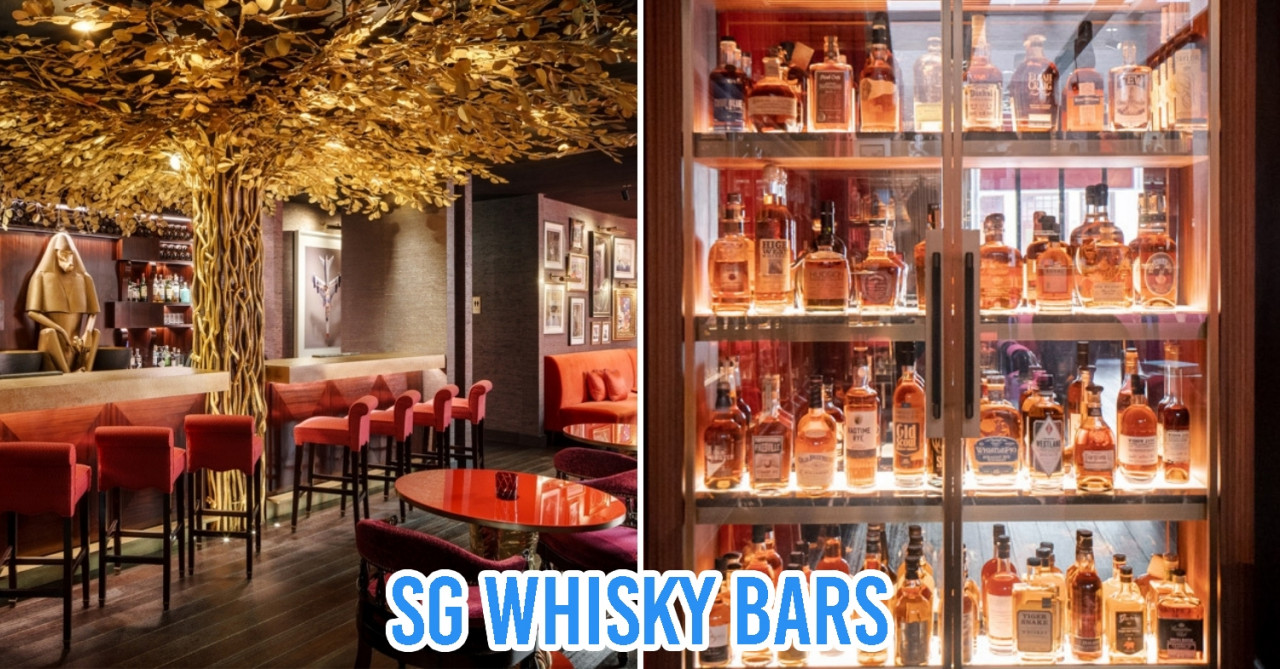 From cheap beer towers to cocktail rooftop bars, we certainly like our glasses filled to the brim. But as much as we like our mojitos and Asahi beers, it always makes for a fun experience when we step out of our comfort zones. Whisky is often overlooked as an old man’s drink, but one sip will leave a lingering peaty taste that rivals no other.

Change up your Friday night routine by heading down to one of these whisky bars – and we’re not talking bars that so happen to serve whisky. These are full-blown experts in whisky. Most have whisky flights for you to savour the smoky palate, all while you’re enjoying the underground vibes.

1. The Whiskey Library at Hotel Vagabond – over 1,000 whiskies from around the world 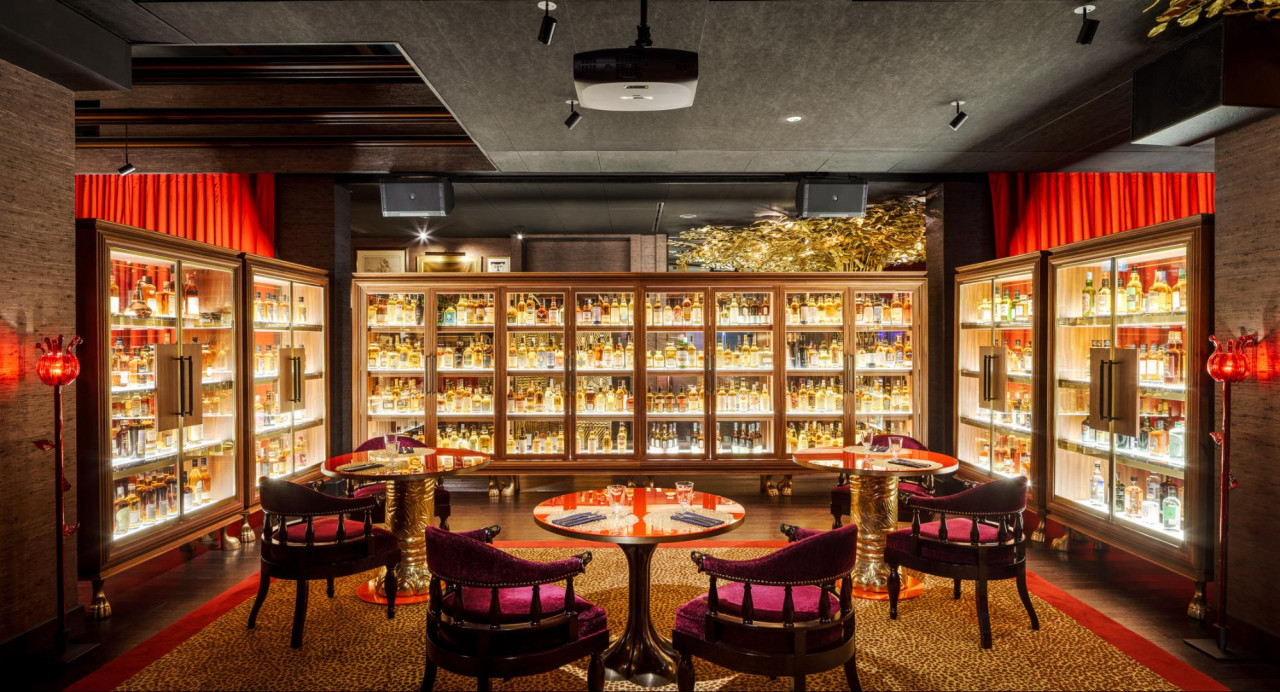 When you first walk into The Whiskey Library, it’s almost as if you’ve been transported to the glitz and glamour of the ‘20s –  plush velvet armchairs and gold decadence everywhere. But our eyes are immediately drawn to the glass cabinets, where hundreds of bottles of whisky are lined neatly.

They’ve got a curated collection of over 1,000 bottles from all over the world – you can expect limited-edition and single cask bottles from distilleries like Miltonduff and Bladnoch. Join as a member ($3000/year) to get your own private locker – you’ll also get plenty of other perks like a 10-night stay (fully transferable) at The Vagabond Club. Order whisky on the rocks: its hefty ice cube comes with a single key imprint. Don’t stroll right by Palais Renaissance the next time you’re in town, there’s a whisky bar hiding in the corner, with rows and rows of amber-coloured nectar. The Writing Club has over 500 labels, so simply lean back in one of their comfortable leather chairs while lazily swishing around your choice of whisky. They’ve got a selection of Scottish labels, including more commonly known distilleries like Glenmorangie, Glenlivet, and Lagavulin along with rarer bottles of Ardbeg and Hunter Laing. Prices start from $16 per dram, but of course, that depends on your choice of whisky. To try a few, opt for the Whisky Flight where you’ll taste three 20ml pours for $68.

Wines, craft beers, and bespoke cocktails are available here too, if you’re looking for a change of pace. Quaich Bar – pronounced like “Quake” – refers to the Scottish drinking bowl, so it comes as no surprise whatsoever that their menu’s mostly made up of Scottish labels. If you’re new to the world of whisky, then order their Introductory Tasting Set where you can taste 5 whiskies for $40++. Prices start from $17 per dram but can also reach hundreds of dollars for rarer pours. 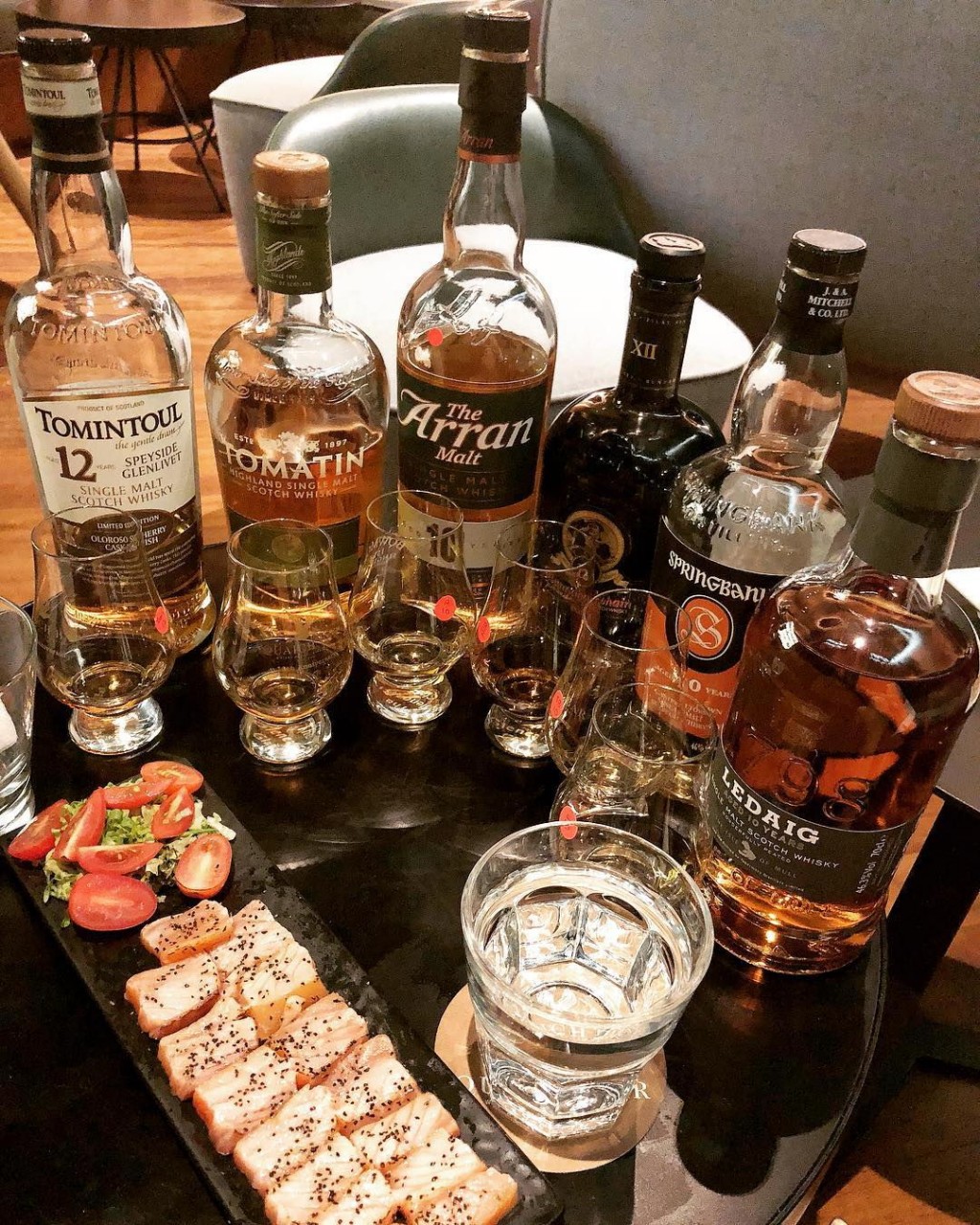 Take a swig of whisky neat, but if needed, add a few drops of mineral water in for a greater depth of smoky flavour. If peckish, Quaich also serves up charcuterie platters of iberian ham and smoked salmon. 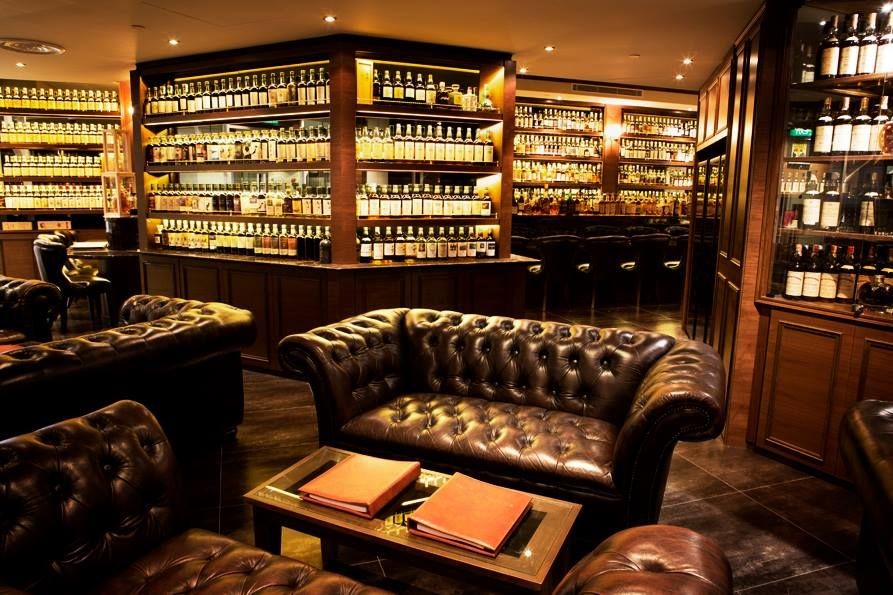 The Auld Alliance almost looks like an upgraded version of Harvey Specter’s office, with its plush leather couches and a motherload of whisky strewn across its shelves. The 70-page menu might be intimidating at first, but it’s only that thick because they’ve included write-ups on each bottle’s tasting notes. There are over 80 labels of whisky to try, ranging from coveted Islay distilleries like Ardbeg to highland whiskies like Glenlivet. Prices start from $14 per dram but like at all other bars, can go into the hundreds. For a whisky bar, it’s quite spacious since it seats 60 people – there’s also a private 14-seater room if you want a more exclusive setting.

Munch your way through the complimentary cracker-coated peanuts while sipping at your chosen whisky. 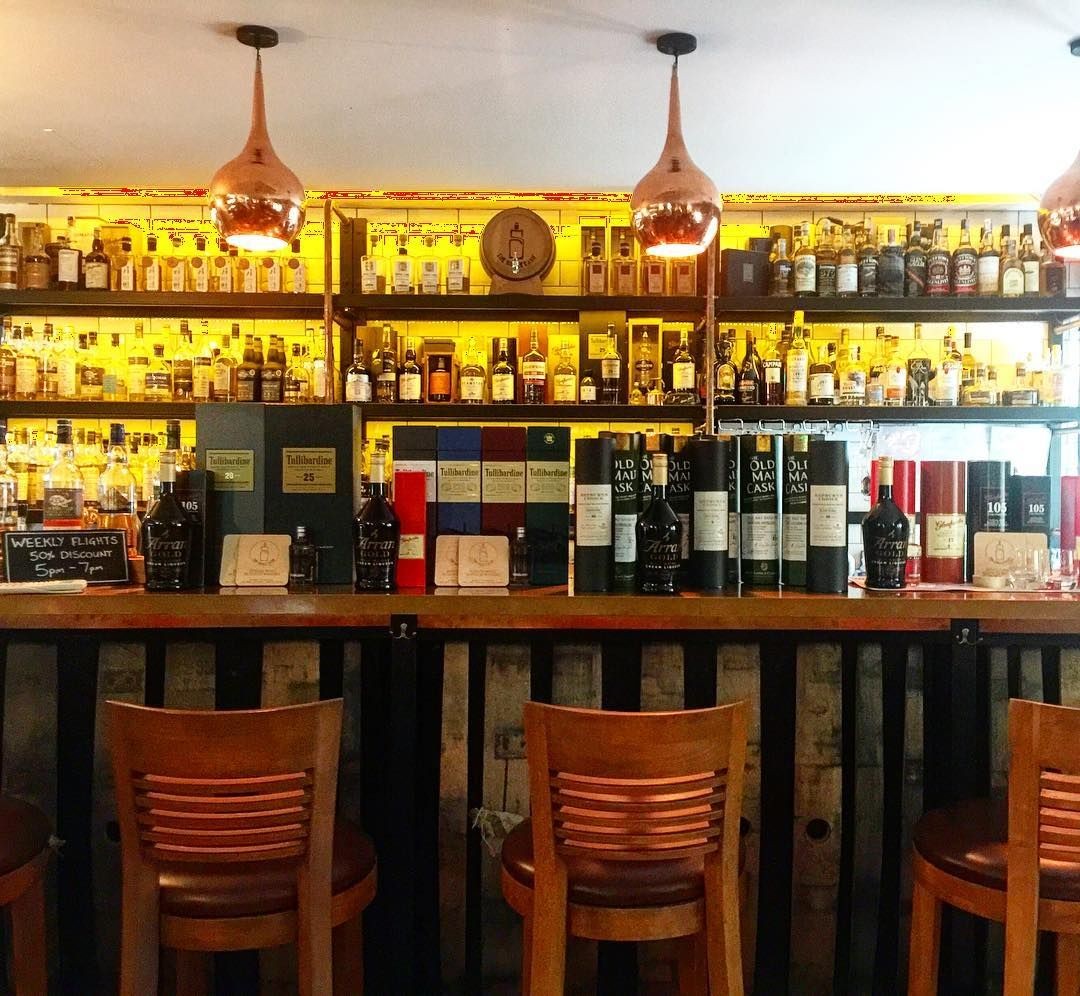 There’s plenty of choice at The Single Cask, with more than 400 single malts, blended malts, and single cask rums. It’s conveniently located in CHIJMES, so the next time you’re having a nice dinner out, pop over to try their range of whiskies by ordering a Whisky Flight ($45 onwards for four 20ml pours).

Known for their more indie bottles, The Single Cask carries bottles like Glenburgie 21 Year Old 1995, known for its well-balanced flavours of oak and floral – to a more obscure Macduff 19 Year Old 1997 that’s both sweet and savoury on the palate. A dram of whisky starts from $15, and cocktails – both bespoke and classic – are all $22 each. If you want something a little more luxe, you can pair your whisky with handmade chocolates for a sweet finish. 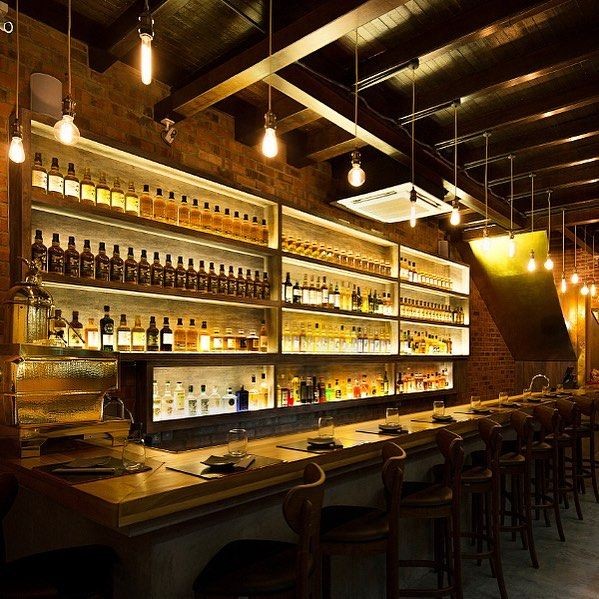 The Wall is a whisky bar like all others, but it also has a full-fledged food menu that serves up Japanese sumiyaki – charcoal grilled food. Their Whisky Flight is categorised according to distillery, so you’ve got flights featuring pours from Balvenie, Speyside, and Glenfarclas.

If you’re up for something a tad more mysterious, the Smoke and Peat Flight series will showcase a variety of whiskies from across Scotland so you can taste the distinct notes of each region. 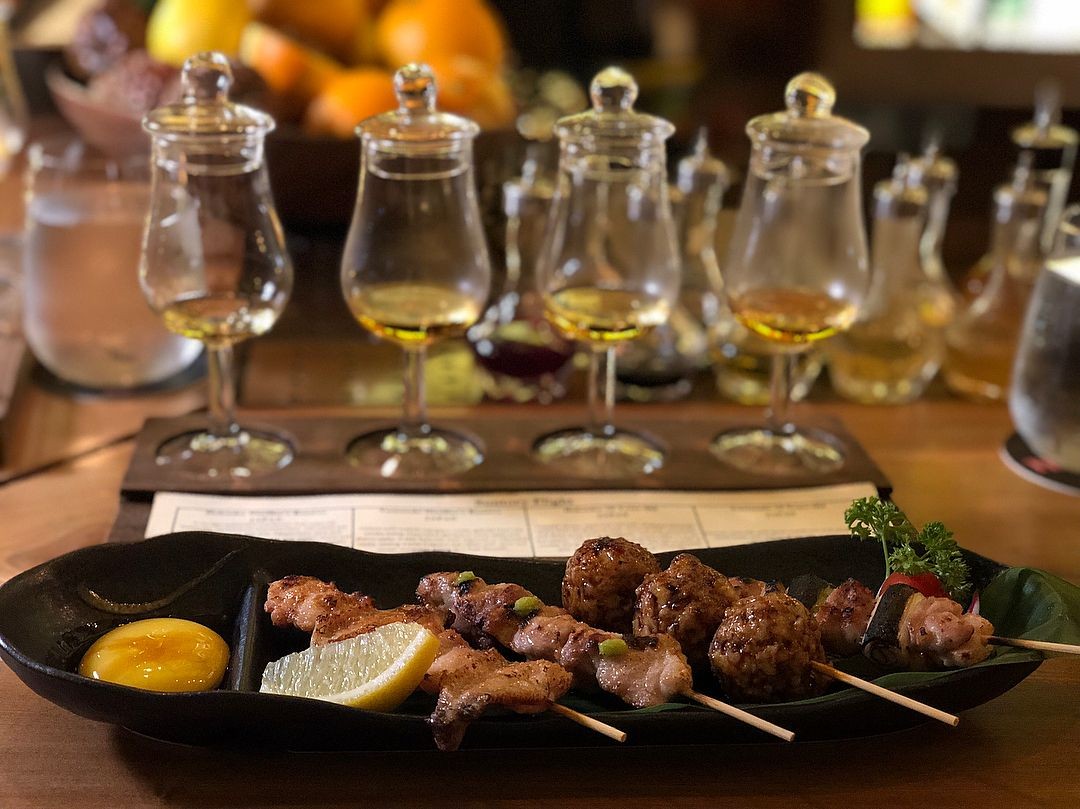 Their East Meet West Flight ($49) comes with Auchentoshan Three Wood, Les Moissons, Kavalan Single Malt and Yamazaki Distiller Reserve, along with four sumiyaki dishes. If you’re there for just a dram of whisky, they start from $14 onwards. Otherwise, try one of their many whisky cocktails for a twist on the traditional Old Fashioned. The crowd at The Flagship’s slightly more eclectic than the classy whisky bars we’re used to – instead of leather couches and dim lighting, there’s a beer pong table to crowd around. From a proudly-displayed mural of Gene Simmons to Nirvana’s Smells Like Teen Spirit blasted loud and clear, you can tell that whisky bar is all about Rock n’ Roll. But still, there are rows and rows of whisky bottles splayed across shelves. Messily with band posters behind, but with a huge range of Scotch labels nonetheless. You’ve got your single malt whiskies like Macallans and Balvenies, but also rarer pours from Littlemill and Rosebank. A dram of whisky starts from $16 but as usual, prices vary greatly. La Terre sounds Italian but is wholeheartedly Japanese. It’s got typical bar-seating so you’ll be up close and personal with the bartenders. Their whisky list here features both new and old-world bottles, but of course, Japanese whiskies are their speciality. Prices start from $18 for a gentleman’s pour of labels like Akashi White Oak and Nikka Coffey Grain. If you’re looking to spoil yourself, La Terre also serves up rare pours from the likes of Karuizawa where bottles go for thousands of dollars – some fetching more than a shocking $50,000.

There are also light bites served, ranging from Mixed Nuts ($6) to Jamon Iberico (from $20). The Swan Song was was opened late last year by two friendly blokes who know their whiskies inside and out. They’ll take their time to explain the intricacies of whisky-tasting. Try their range of rare and vintage whiskies with a dram or two – they’ve got exclusive bottles like a Laphroaig 1970 and a Linkwood 28 Year Old.

For a few drams, prices are estimated to start from around $40/person, but this depends on what you order. Their Laphroaig 1970’s one of 720 bottles worldwide, and goes for $450 per 20ml dram.

Put your assumptions aside: whisky bars aren’t just for the cigar-smoking suits. Since Singapore has its own fair share of whisky bars, try swapping out your regular heartland bar for something a lil’ more exciting for a change. Whether it’s a full-fledged whisky flight or a whisky cocktail you’re after, these bars promise a taste of smoky goodness that’ll leave you swooning for more.

FitnessFest by AIA 2018 Gives You Full Access To Yoga, Barre, and CrossFit Classes for $50
Singapore's Only Vintage Camera Museum Has Over 1,000 Pieces, Some Which You Can Pick Up...