Cheap beer in the heartlands under $60 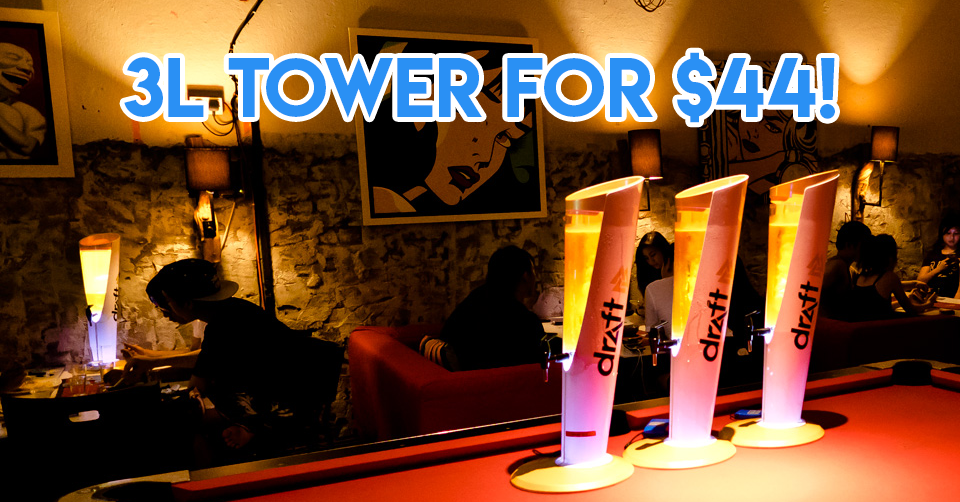 We all need to unwind and have a beer with our kakis once in a while, though meeting in town is not always ideal when everyone’s busy. The next best thing to do is to meet in the heartlands, convenient for friends who live within your area. You may be surprised to hear this, but there are no lack of neighbourhood watering holes either.

The greatest advantage about heading to most of these heartland bars is that you don’t have to worry about being turned away after showing up in your most lupsup singlet, shorts and slippers. We’ve uncovered the following spots, so that your crew can get into chug, chug, chugging right away: 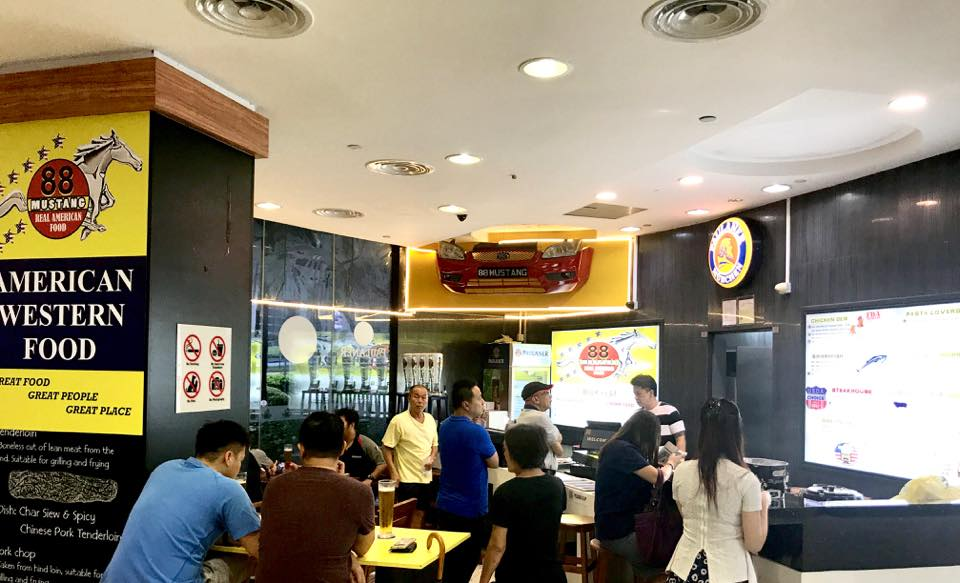 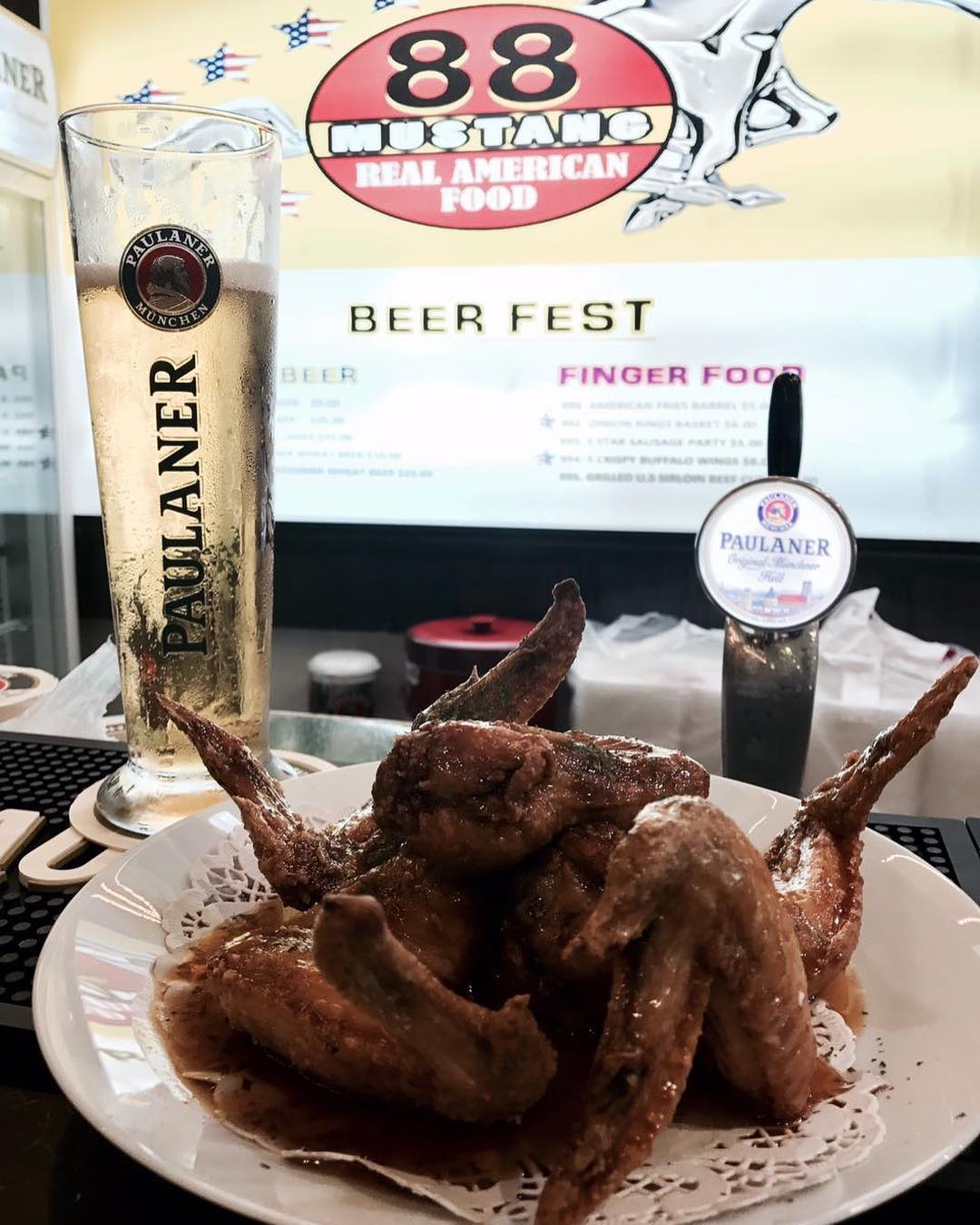 Though it’s situated in a corner of the relatively new Greenwich V’s food court, it’s unlikely you’ll overlook 88 Mustang from its distinctive wall mounting of a Ford’s front bumper. A tower of Paulaner draft beer here goes for $55 all day, errday to alleviate those work woes of yours. 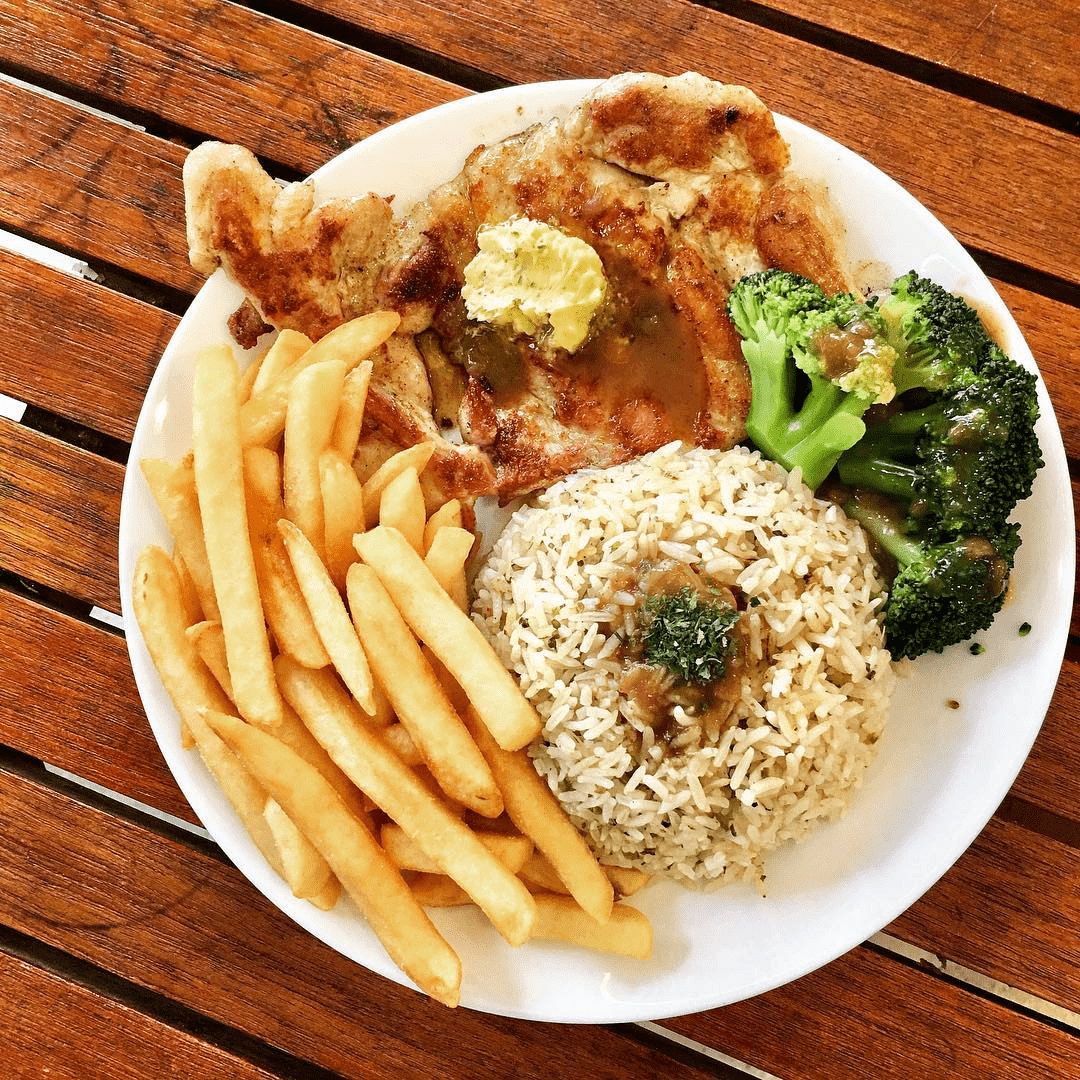 Here, you can get a taste of good ol’ American diner offerings such as steaks, ribs, chops and fish ‘n chips. If your appetite needs taming, their affordably-priced Garlic Butter Chicken Chop ($7.50) with fries, rice and broccoli is sure to get you stuffed. 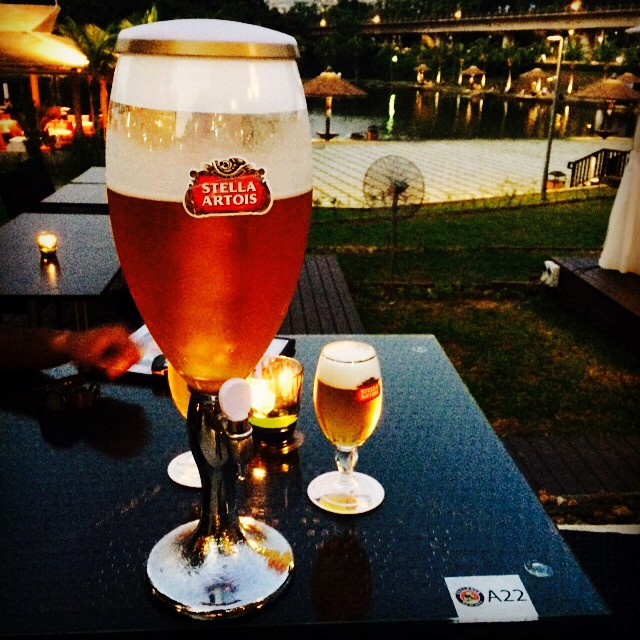 To sit back and take in nature while having a drink is one of many pleasures in life. Quench! Bistro & Bar harkens back to a simpler time with its close proximity to prawning and fishing ponds, and their all-day draught beer tower prices of $55 for 1 and $98 for 2 will be sure to quench your thirst. 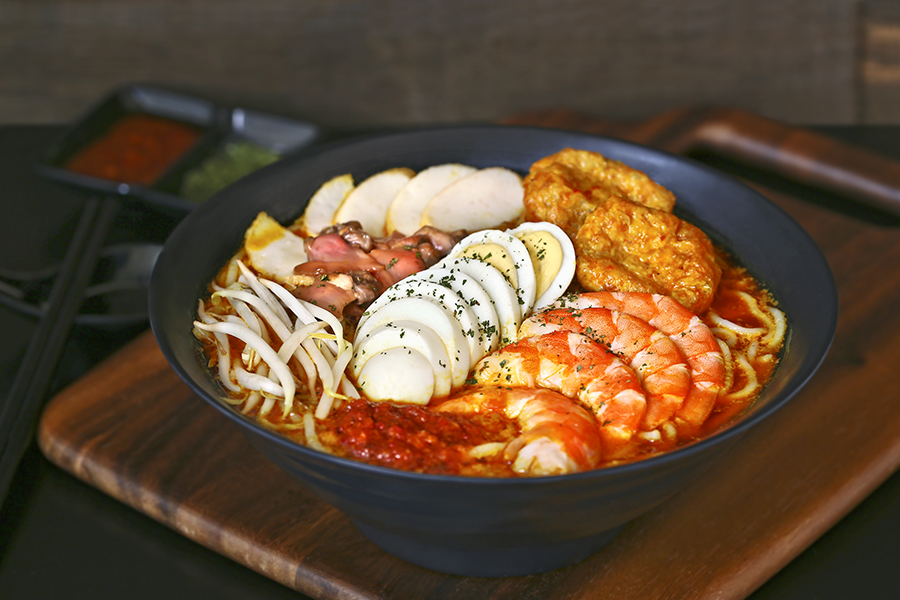 Adding on to the kampong feel of the place are homely dishes like Hometown Nasi Lemak ($9.90) and Traditional Laksa ($8.90). Better yet, free parking spots aplenty nearby mean that finding a place to park your ride won’t be an issue. 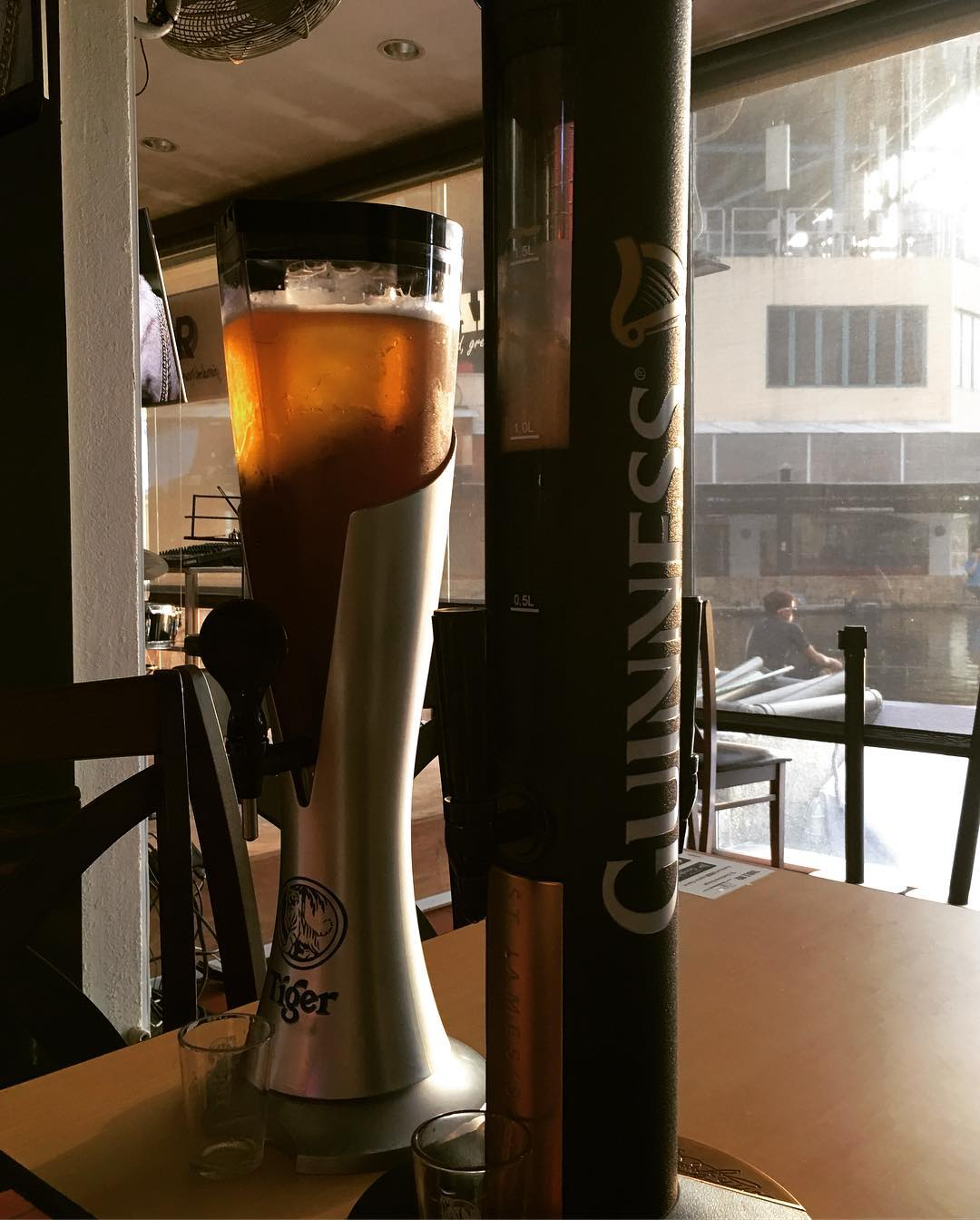 Obar has several outlets scattered throughout Singapore, offering different forms of entertainment in each – such as karaoke and live music – to cater to varying preferences. A common theme though is that they all support local music so when the patriotic itch kicks in, pop by their nearest outlet to sing along at the top of your voice. 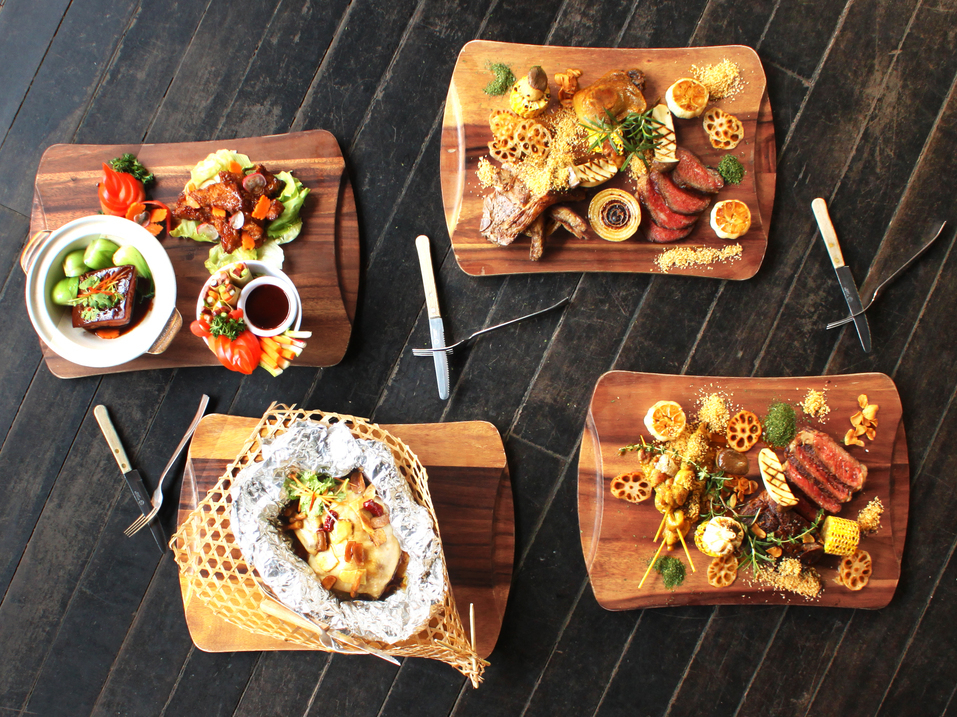 You’re bound to get thirsty and hungry after jiving to the live tunes, so order a one-for-one Tiger + Guinness Stout tower for $100 and Grilled Angus Beef ($24.80) to satiate yourself. 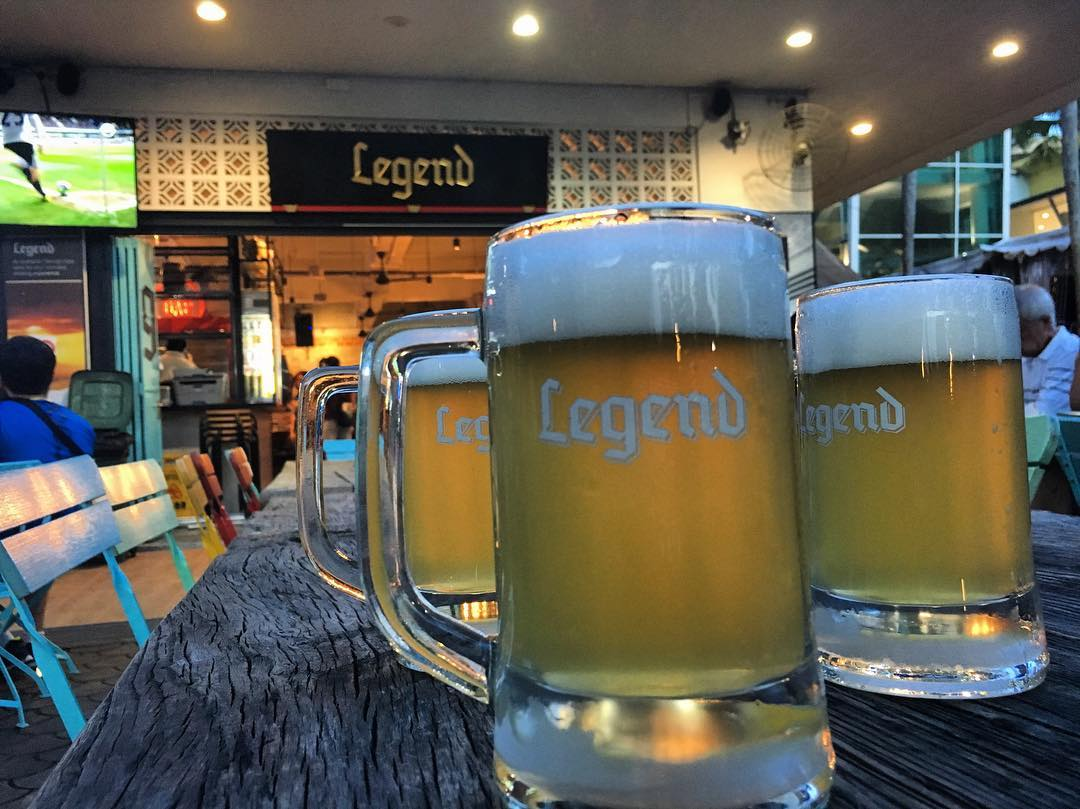 One can say that Legend Cafe is, legend…wait for it…dary. Situated along the scenic Punggol Reservoir, they serve all types of food like pizza, seafood, and even traditional toast, which you can savour as you’re entertained by live music. 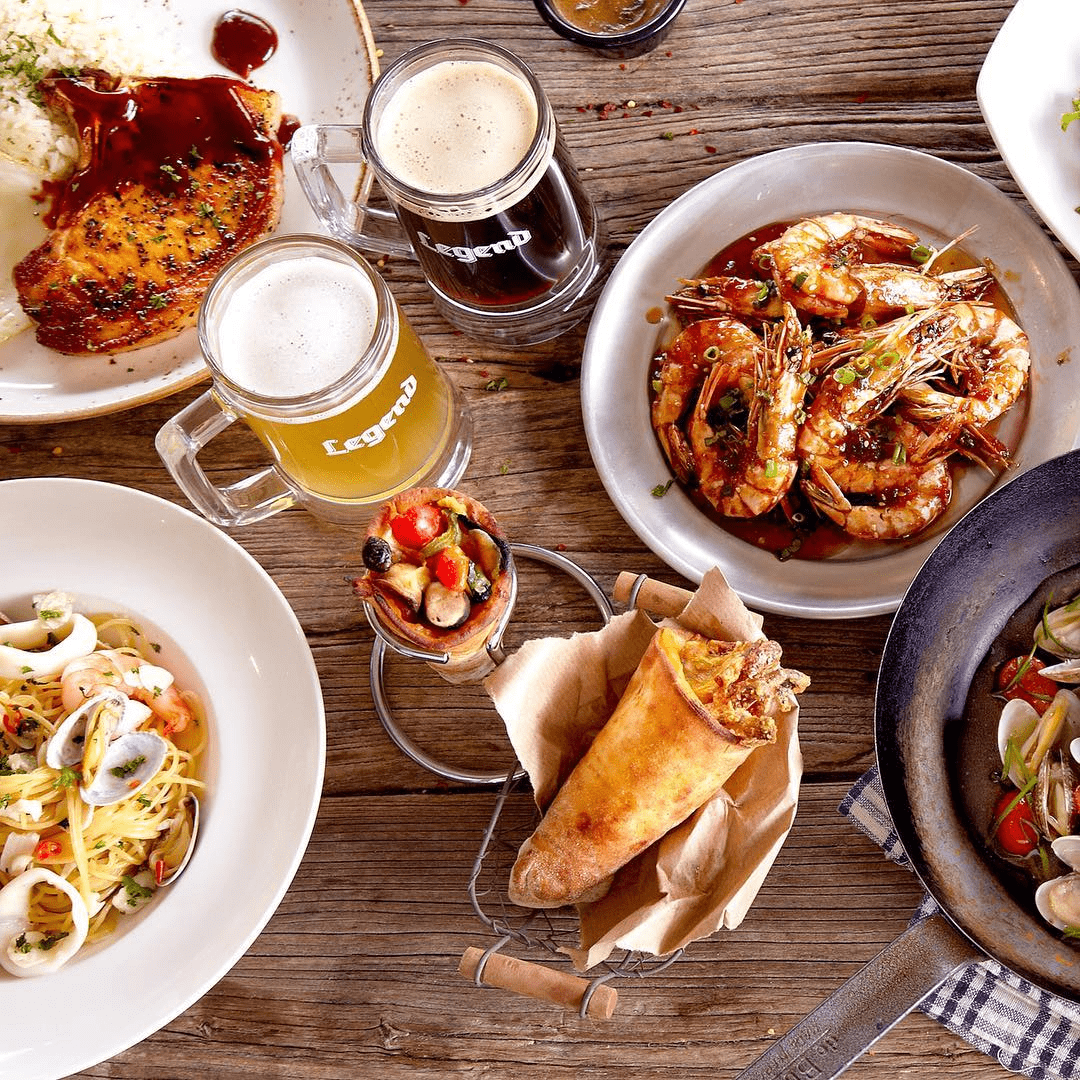 But where Legend Cafe truly wins hands-down is in its unbelievably cheap beer towers:

Additionally, they’re holding a one-for-one promo on Legend beer towers from now until end November 2017, where you’ll pay as little as $44 for one White and one Dark beer tower combined! 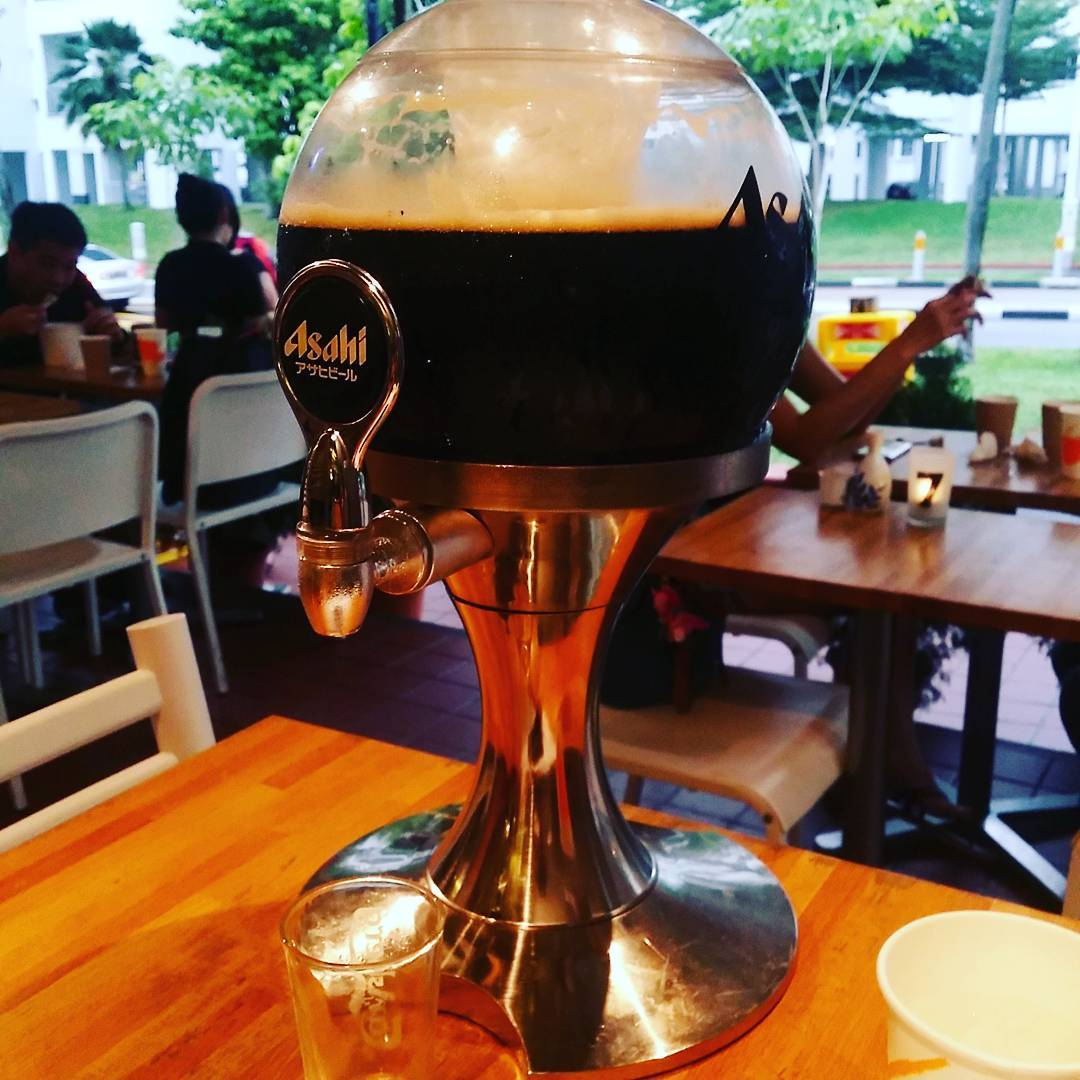 Tachinomiya is the first Japanese bar to be situated at the foot of a HDB block and brings the izakaya back to its roots of being a casual neighbourhood hangout for informal get-togethers. 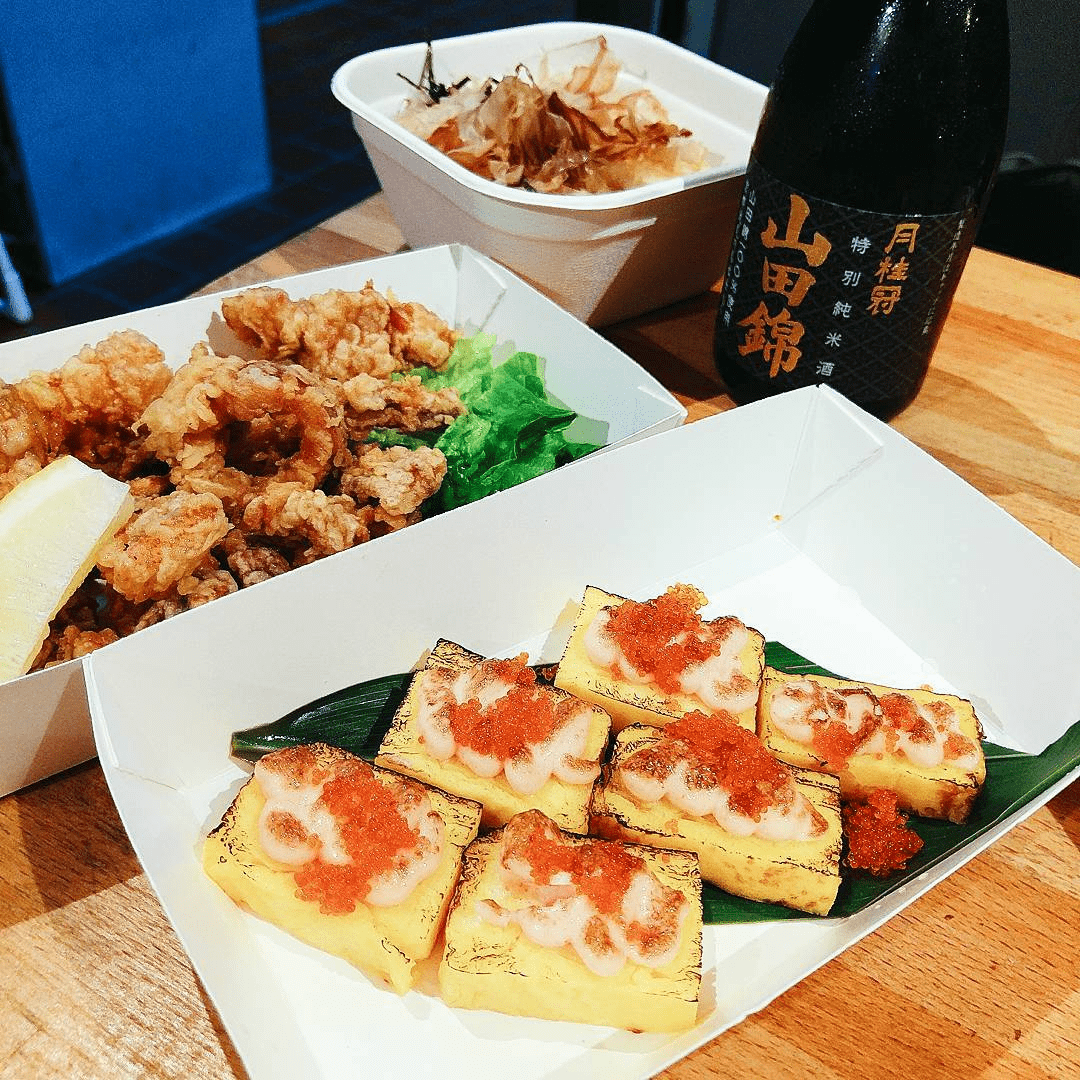 With their $55 Asahi Super Dry tower, you can stock up on Cheese Mentaiko Scallops ($3.50) and Mentai Salmon Yakitori ($4) through the night until you’re stuffed and happy. 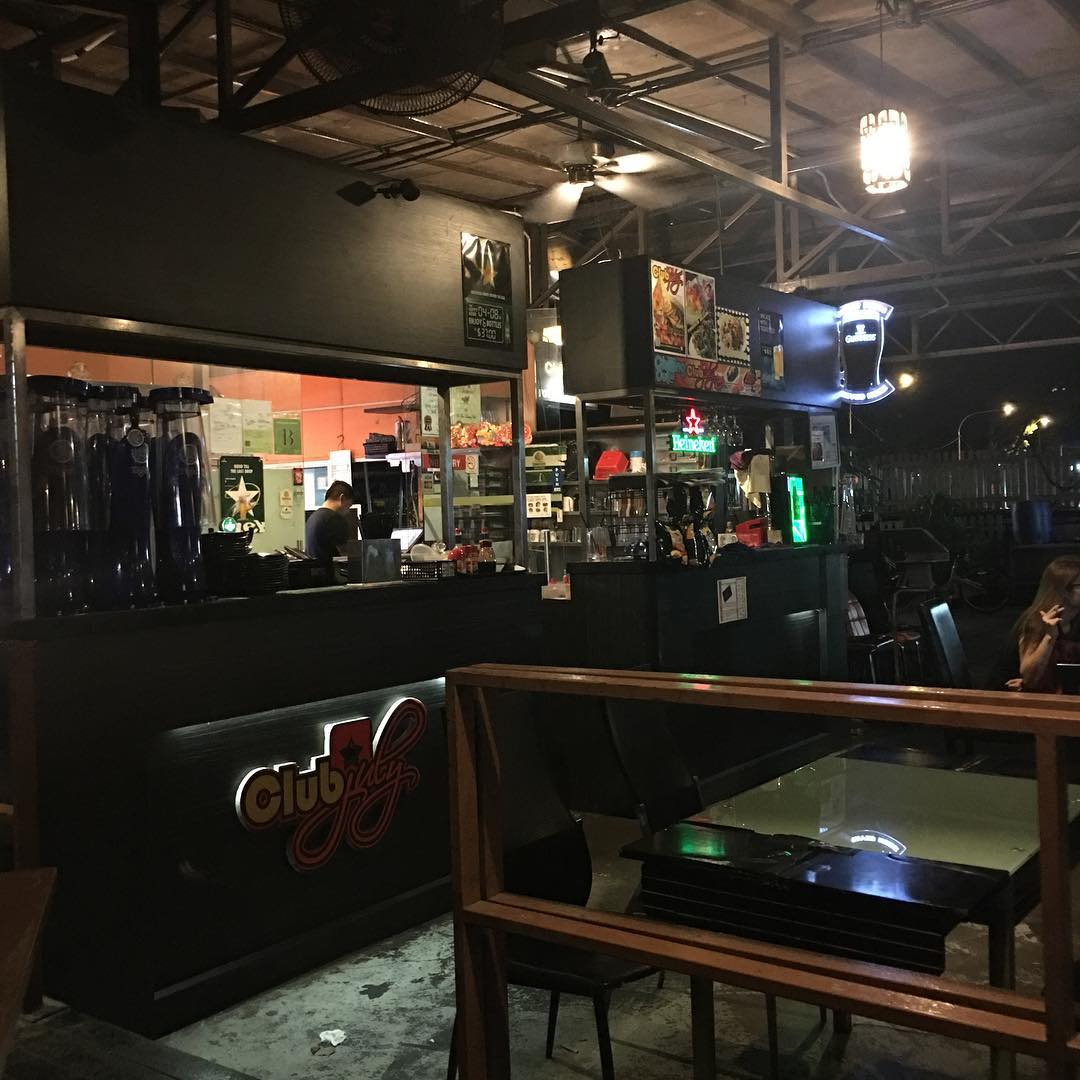 Like Obar, Club July also has multiple locations scattered throughout Singapore, and each one offers a different experience from the next. At Stagmont, there’s a pool table, karaoke and alfresco dining, while Toa Payoh has several darts machines lined alongside the bar. 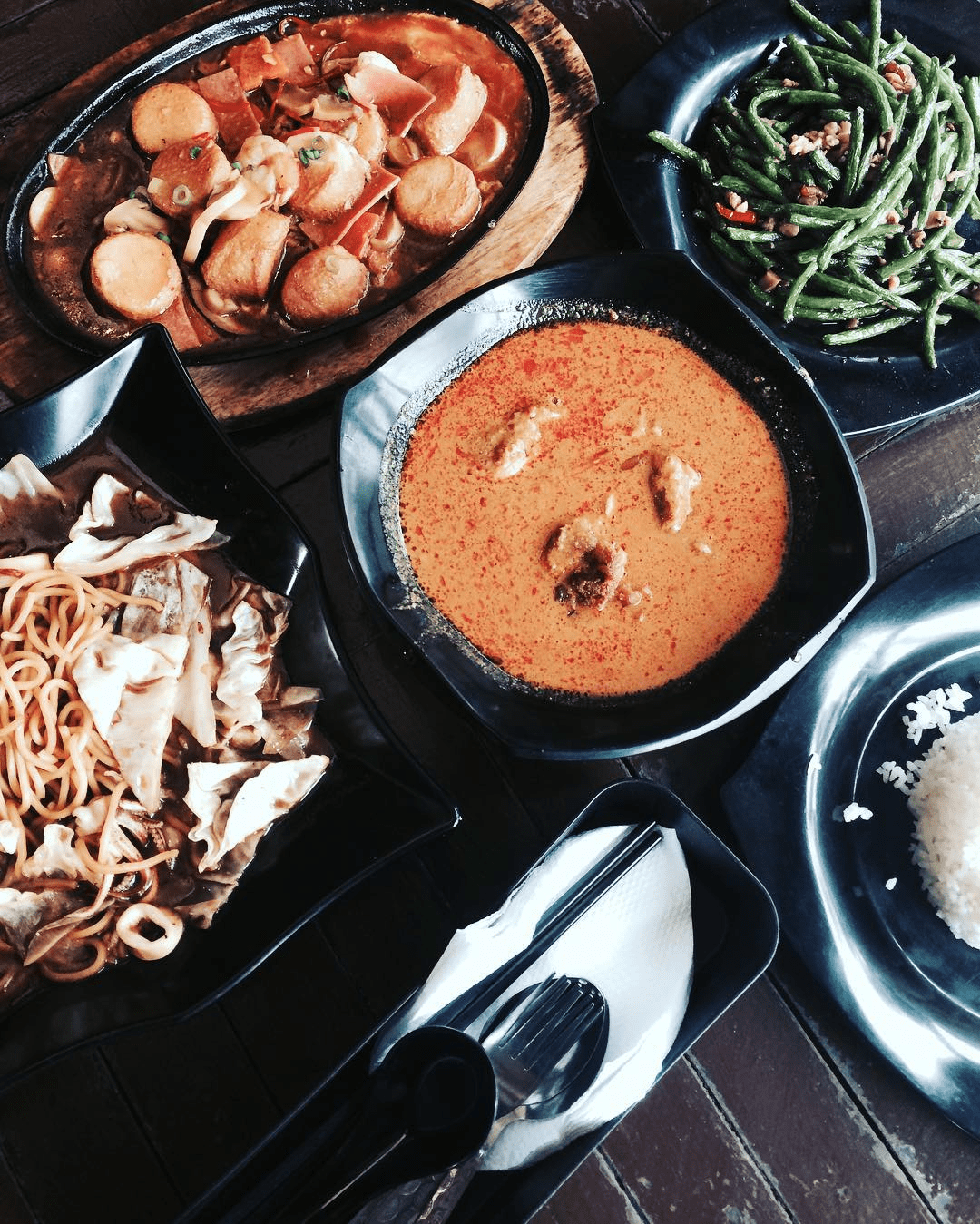 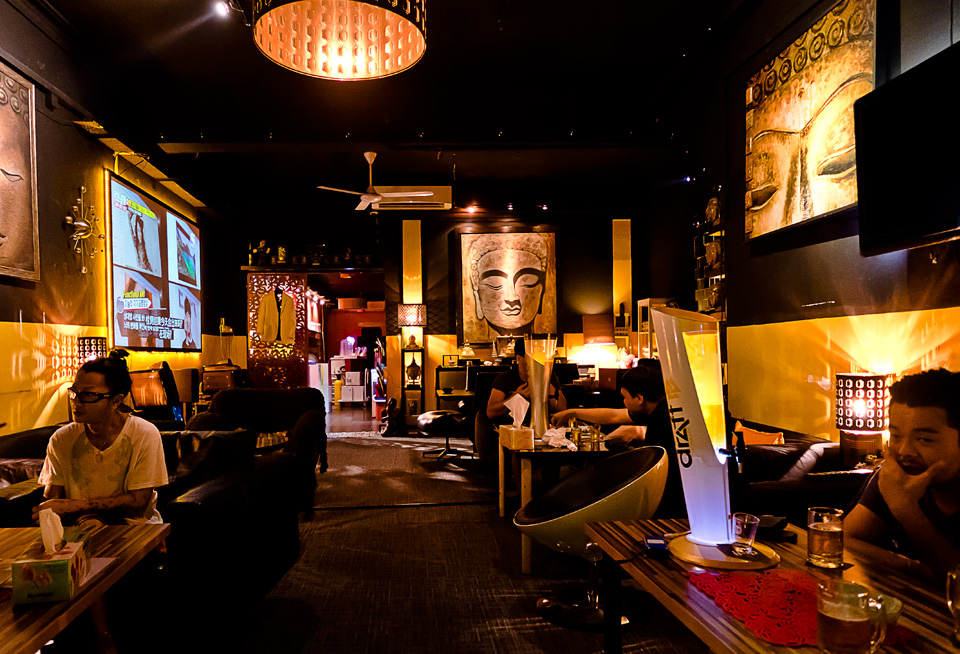 Those seeking exclusivity are sure to like 283 Cafe, as entry is subject to approval only. If you’re lucky enough to be granted access, you’ll get in on their extensive choices of beer towers all with no service charge or GST. Here’s a list with prices for members and non-members respectively (membership is subject to approval by the manager): 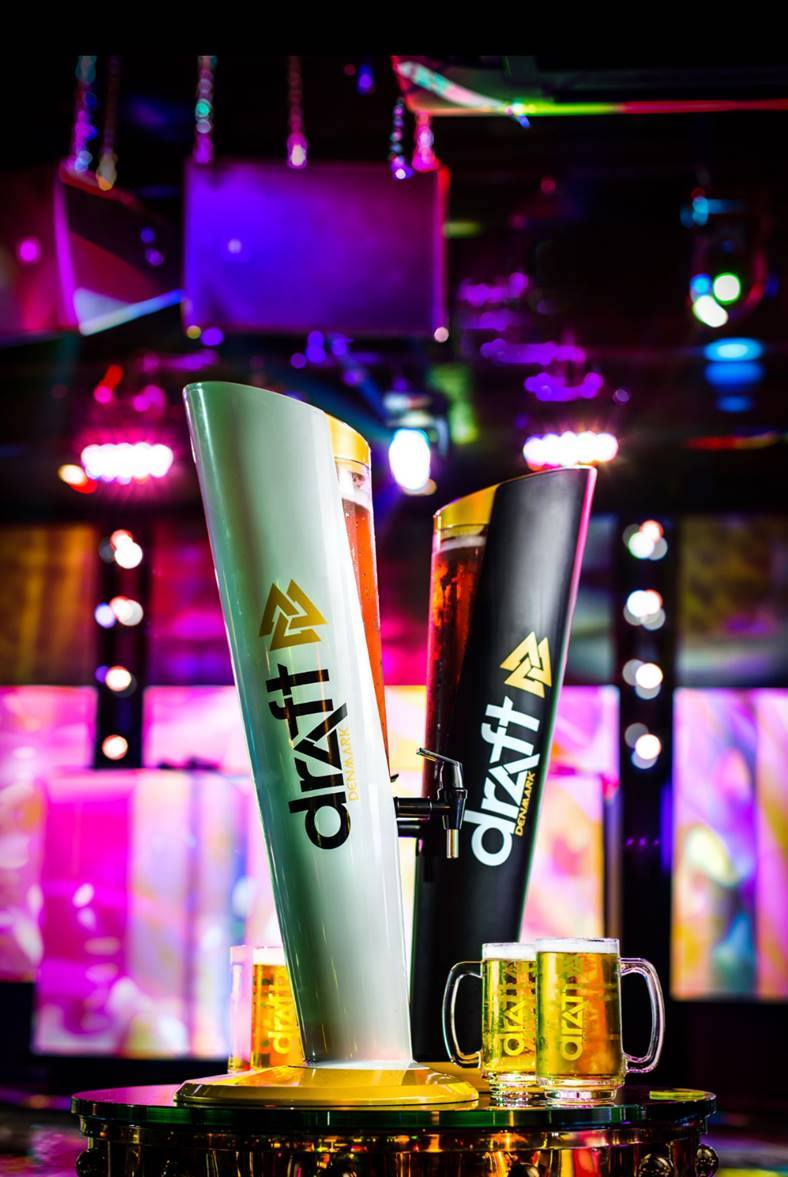 Having had so much to drink, there’s got to be some way to sweat it out. Either play a bout of pool or cheer on your favourite football team during EPL match screenings, as you’re having fun in this cosy establishment in one of Singapore’s oldest neighbourhoods.

Tip: To maximise your chances of entry, make an appointment with the General Manager, Albert Ng, after 4PM if you wish to head down to 283 Cafe within the same day. 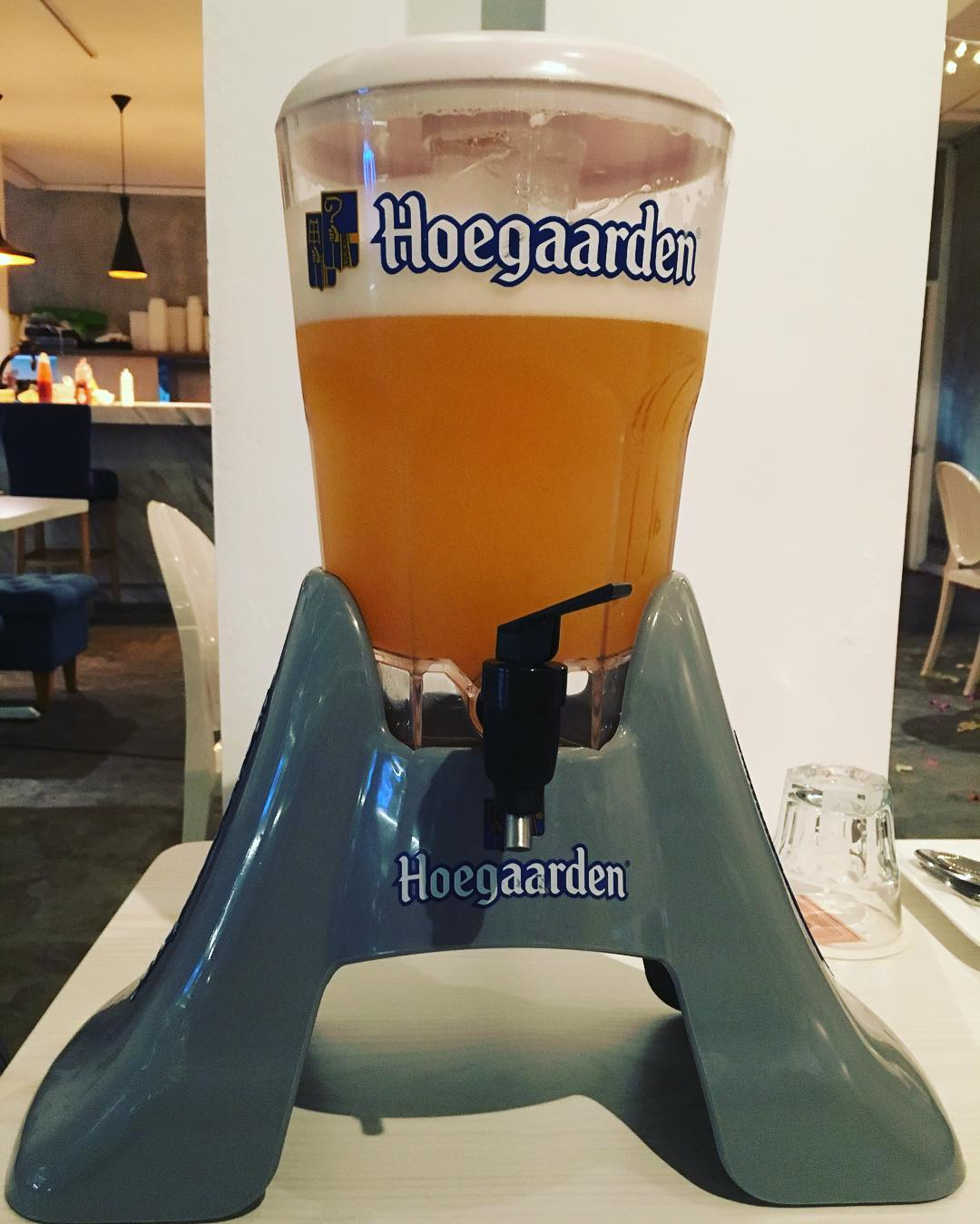 Mad Nest is a house of Asian delights, with Thai, Chinese, Japanese and North Indian cuisine under one roof. Here, the ambience is sophisticated yet laidback, with unpainted concrete walls adorned with prints from emerging local artists – all of which are for sale.

Mad Nest occasionally hosts arts and crafts workshops, which even the young’uns can join. These workshops are generally open to the public but sometimes registration is required so, if you’re interested, head over to their Facebook page to stay updated. 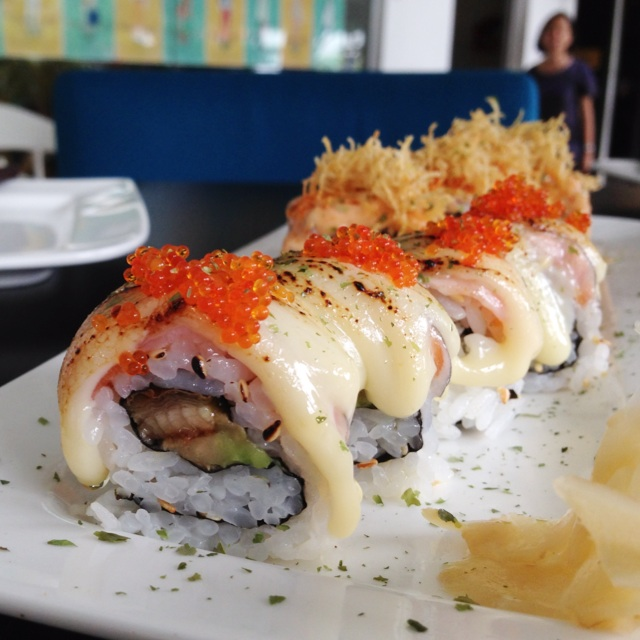 The Oishii Maki ($16) and Chicken Curry ($12) are favourites of many who come to enjoy the gastronomic delights here, and if you’d like to down some alcohol while you’re at it, $55 Hoegaarden beer towers will complete your meal.

Now that you know of these cheap beer tower deals at bars in various heartland neighbourhoods, it’s time to jio your drinking kakis to bond over a good session of beer, food and chit-chat till y’all toh!