Growing up with vitiligo

Most of us probably went through that tragic teen phase where we hated the way our skin looked. From sporting a face full of acne to carefully blotting our shiny foreheads with oil-absorbing sheets, self-confidence wasn’t exactly an easy feat once puberty kicked in.

I was no stranger to the random outbreaks that assailed both my classmates and me to varying degrees. But 16-year-old me knew something was amiss when I noticed white patches forming on my skin that didn’t appear on that of my friends – they were supposed to go through that teenage phase too, no?

Fast forward to a few months later, my spots were diagnosed with an official name: vitiligo. Here’s how my experience with a rare skin condition was like growing up, and how I finally learned to deal with hurtful comments, accept myself and literally feel comfortable in my own skin.

Check out our other perspectives here:

Going to school with the beginnings of vitiligo

I remember sitting in the room of a dermatologist clinic with my parents when I first discovered I had vitiligo. While I was clueless about what the doctor had rambled on back then, the words “no guaranteed cure” echoed in my thoughts throughout the entire journey home. Funnily enough, the emotions of eternal hopelessness and failure only shocked me to reality several days later, when I realised I had to live with this condition everywhere I went – including school.

Although it started with just a small spot under my right eye before spreading to other parts of my face, going to school required an insurmountable amount of mental energy from me that went far beyond the common “cannot get out of bed” syndrome. Especially during my teen years where blending in with everyone else was top priority, that teensy bit of difference instantly made me feel like an alien that only deserved a place on some unknown planet. 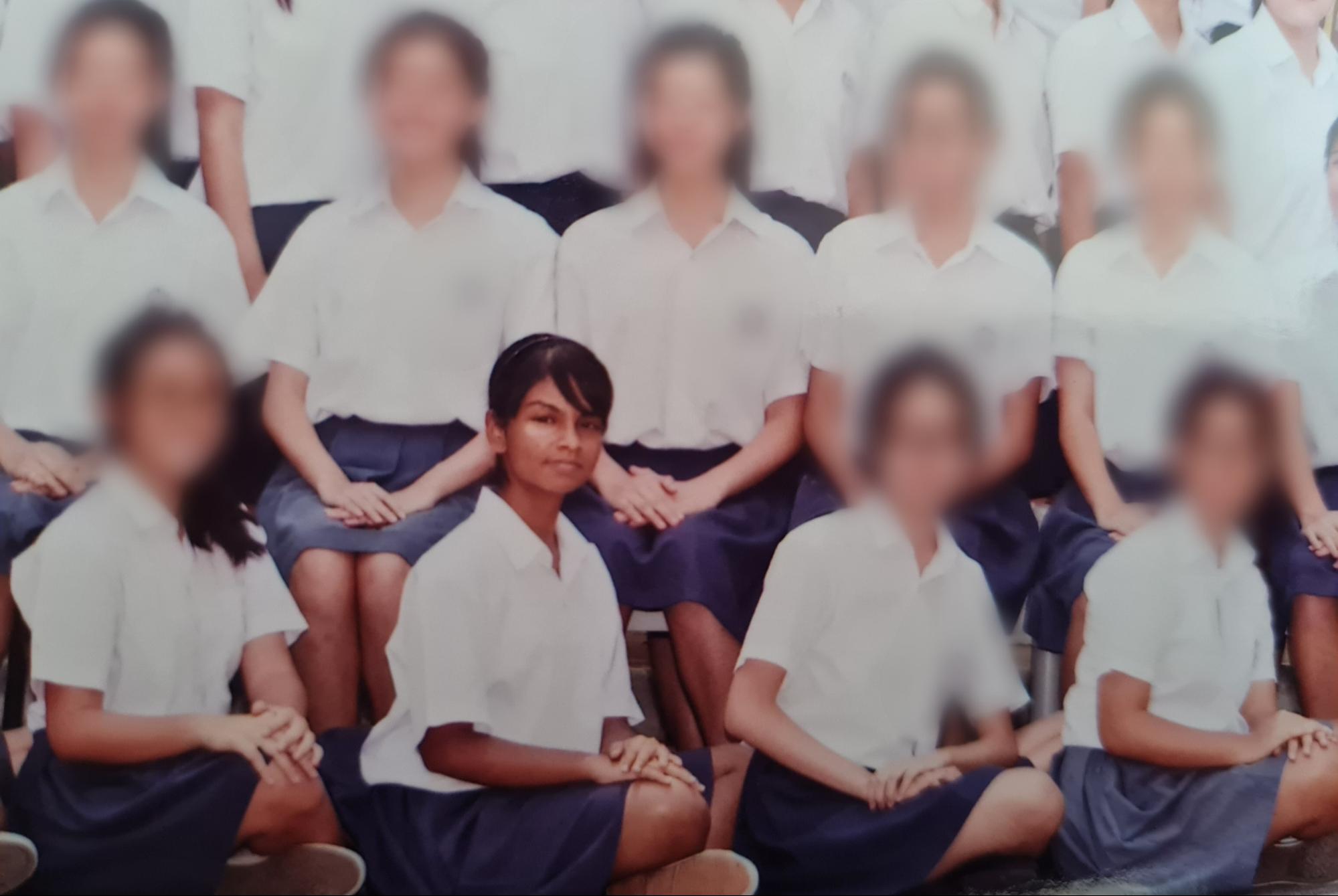 I realised I had vitiligo when I was 16, which is a long-term skin disorder characterised by patches of skin losing their pigment.

It didn’t help that vitiligo made its debut smack in the middle of my O Level preparations either, meaning that apprehension constantly co-starred with academic tension in the spaces of my head.

When I did manage to haul myself to classes, though, I almost instantly regretted it. Whether I walked down the long corridors to chemistry or trudged back to lessons after recess, I began receiving nasty remarks from classmates and people that I didn’t even know of beforehand. It was like I suddenly became a celebrity overnight, albeit for undesired reasons.

I would probably file these under the book of trivialities that deserve no special attention today – but because this experience was incredibly new back then (and maybe because I was an emo teen) crying my eyes out in the comfort of a toilet cubicle or in my room once school was out quickly became my new pastime. 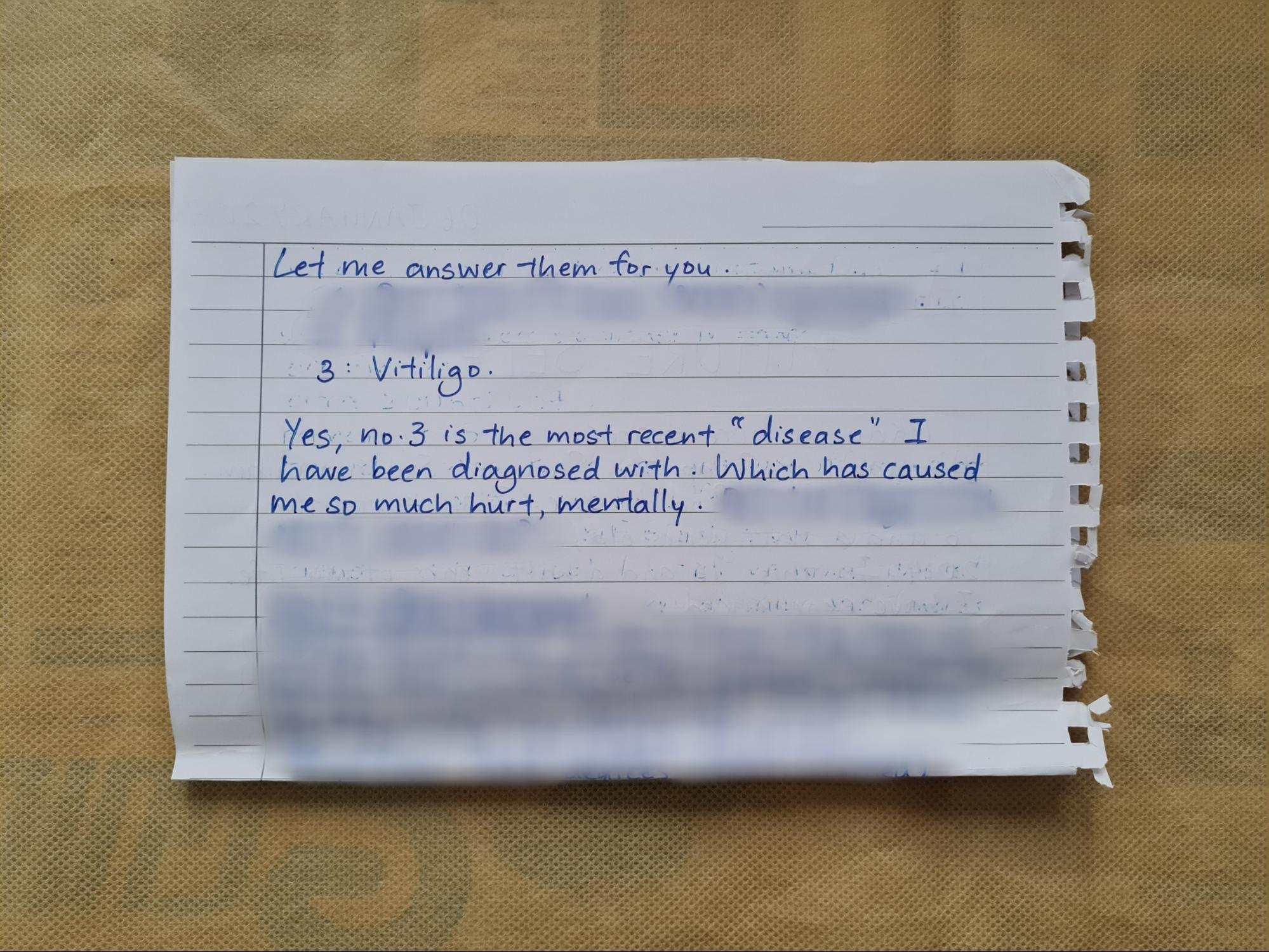 An angsty letter to myself written at 16. “Cow” and “zebra” were some of the common nicknames I received.

Luckily for me, there was a silver lining amidst the storm in the form of supportive family and friends. While they never judged me for my physical appearance, they still did not know much about this condition that only affected one-percent of the world’s population – including one of the most iconic figures of all time, Michael Jackson. 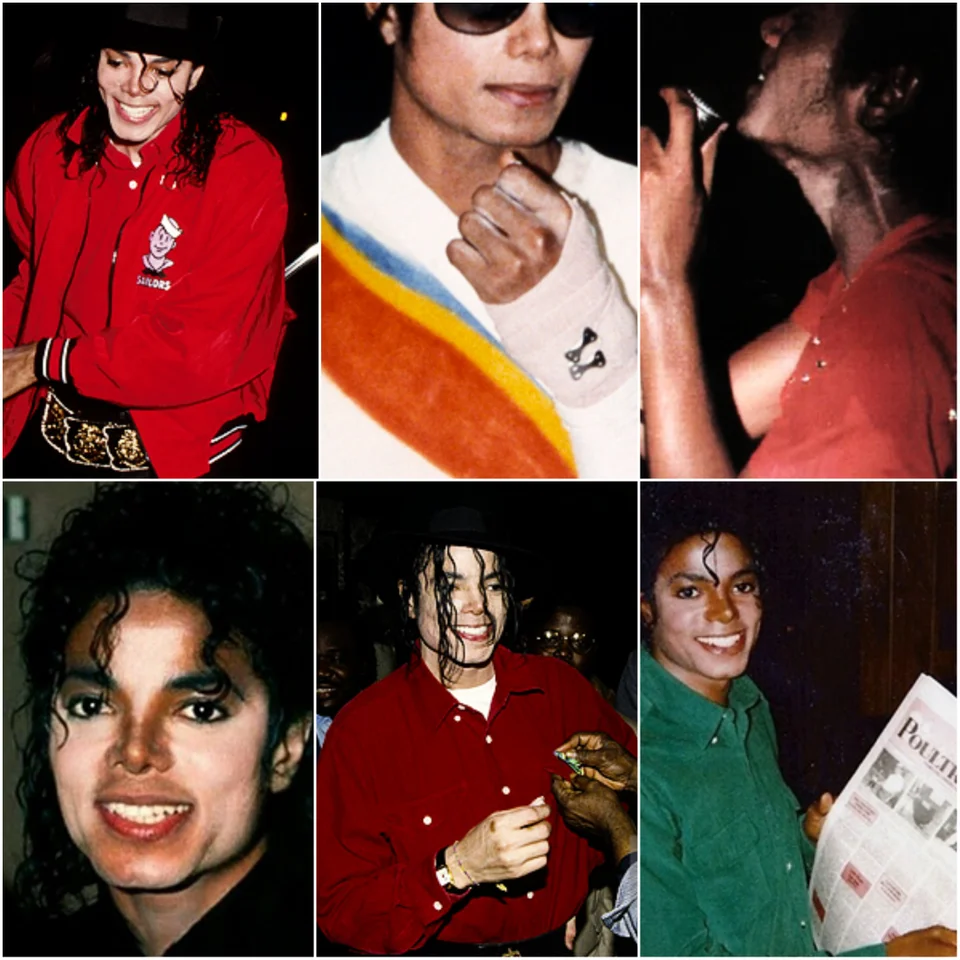 Pictures of Michael Jackson with vitiligo on his face, neck and hands.
Image credit: Reddit

This motivated me to leave no stones unturned when researching about vitiligo, which definitely lent a hand in exploring my new identity as well as explaining it to my loved ones.

Juggling mean-spirited banter from school aside, I also faced a fair share of misguided comments from relatives that were quite the challenge to dismiss. From “not adding enough greens to my meals” to “stressing myself too much over schoolwork”, there was an endless list of random diagnoses thrown at me following my pale patches. 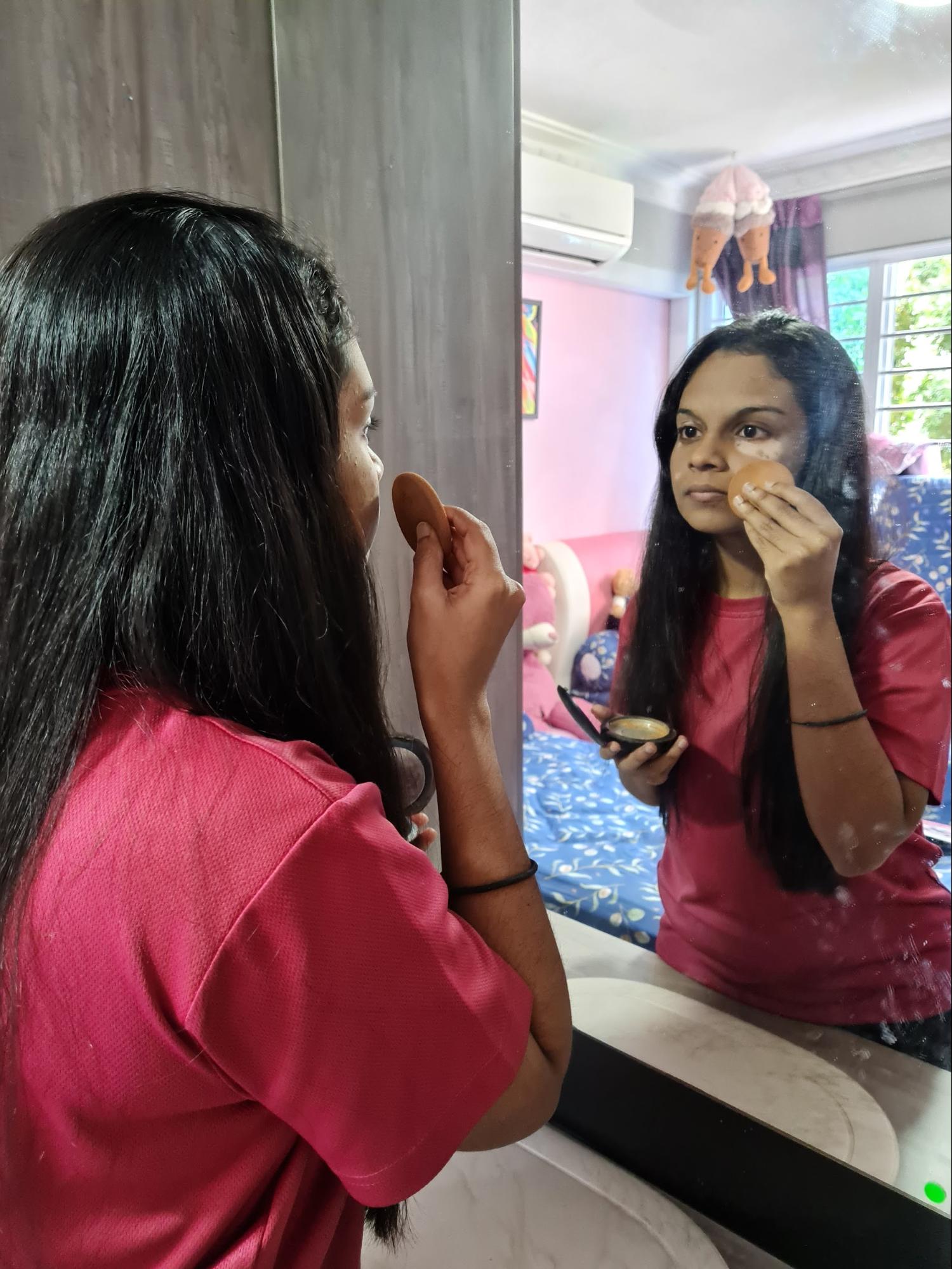 I also overheard comments from JC schoolmates saying I was “desperately trying to seduce boys” with make-up, when the only thing I was desperate for was a pass in H2 Economics.
Image credit: Sivapriya Subramaniam

Things came to a breaking point when I felt shame in showing my true face, even in my own home. Whenever my family hosted birthday celebrations or informal gatherings, I remember panicking and rushing to my room, where I smeared a thick layer of make-up on my face before emerging from my private den.

Depending on this secret weapon as I progressed to JC was like waging another war. While waking up extra early to snag a few extra minutes for make-up felt like the world’s biggest chore, preventing the unnatural tint on my face from heavy foundation proved to be a separate challenge.

Of course, my closest friends knew my reasons. But from the callous remarks that were thrown my way like in secondary school, I knew that others could be less merciful.

Still, bottling up the hurt felt “easier” at that time, as opposed to explaining to everyone that vitiligo was an autoimmune disorder that is both non-infectious and unrelated to general health or physical functioning.

How I began seeking solutions for my skin condition

Several months into my journey with this lesser-known condition, I finally mustered the courage to schedule UV light treatment sessions thrice a week at Mount Elizabeth Hospital. To allow a complete stranger to poke at my white patches stirred every ounce of inferiority within me, which was the main culprit of my delayed treatment pursuits. I was also fearful that even a professional might let a rude remark slip unknowingly.

But after months of trepidation, hitting that “book appointment” button was definitely relieving. 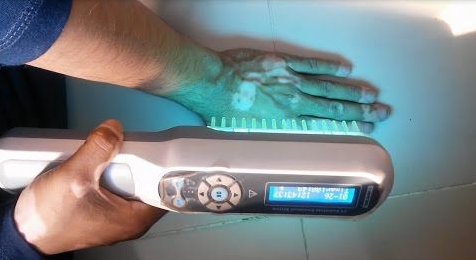 Also known as phototherapy, exposure to UV rays may increase the number of melanocytes (cells that produce melanin) in areas of skin affected by vitiligo and prevent new patches from forming.
Image credit: Pinterest

Since my appointment dates were clustered on weekdays, making the trip down to the clinic after school became a necessity. While the mental effort of washing my make-up in secret before marching “naked” into the treatment room was plenty, watching the receptionist swiping away at my mother’s credit card after each session felt equally upsetting.

With that being said, I felt a slight thrill in seeing my skin slowly regain its colour over the months. Although it was a super-minute change, my family reassured me that they did observe some level of improvement in my overall condition. I was also armed with creams of varying intensities that served as sidekicks to the recovery process, that had to be applied twice a day. 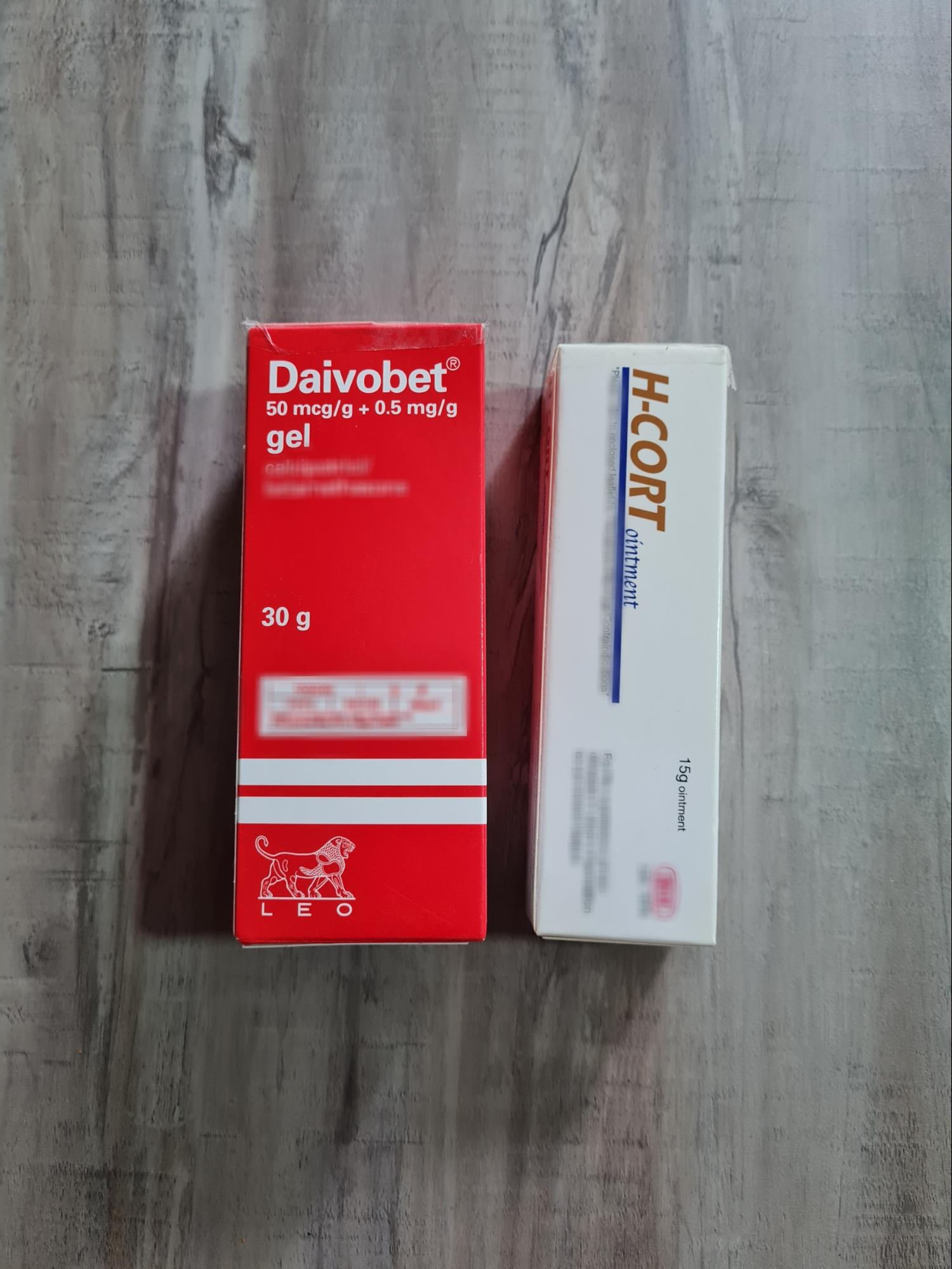 Creams that aided my vitiligo recovery, which I applied each day and night.
Image credit: Sivapriya Subramaniam

End result: Because of how frequent my treatments were, I felt subconsciously reminded that I was different from the rest. The hassle of travelling to-and-fro plus the exorbitant fees were also secondary factors that unsettled my mind further, which influenced me to halt my ultraviolet therapy prematurely.

My parents are strong believers of natural products, which led them to bring me to a professional ayurvedic clinic tucked away in the shophouses of Little India. However, the doctor’s suggestions for treating my skin disorder varied slightly from the traditional ways that I was accustomed to at Mount Elizabeth.

This time, I was prescribed herbal capsules that did not require me to make in-person visits to their little health centre. But as someone who completely despises taking pills even for the common cold, I remember feeling a sense of dread pour over me as I watched the attendant carefully pack multiple bottles of tablets into the bag. 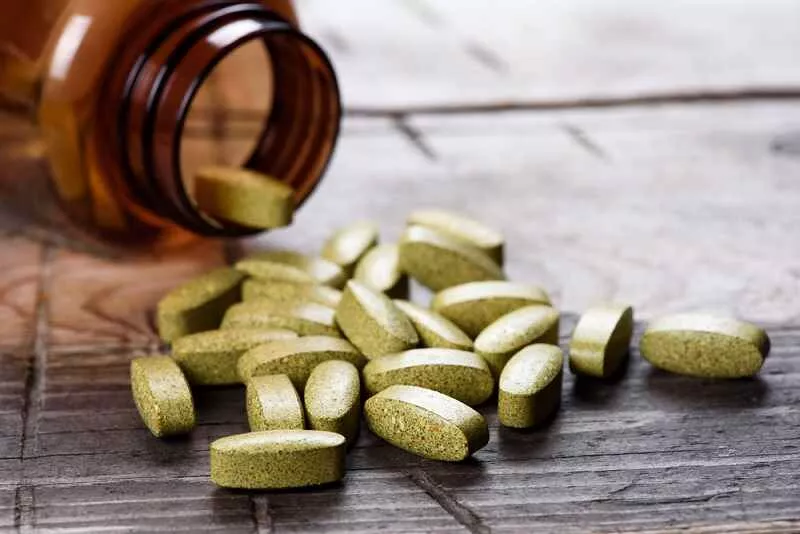 These aren’t the exact herbal pills I was prescribed, but they are similar in shape and size.
Image credit: Live Science

End result: It was a tough pill to swallow, but my white patches did not budge even after three months of trying ayurveda.

With that being said, remedies for those with vitiligo vary across each individual, depending on your preference and how your skin responds to different treatment methods.

And while there’s no “hard and fast” cure for vitiligo, you can still protect your skin by using sunscreen and wearing protective clothing when you’re out in the blazing heat. This shields those lighter patches that are more susceptible to sunburn.

Becoming fully comfortable in my own skin, vitiligo or not

I couldn’t pinpoint whether it was sheer frustration or a sudden burst of courage that came out of nowhere, but I soon decided that enough was enough. A few years after actively seeking solutions for my vitiligo, I derailed from the entire medical path and decided to make passage to public places freely – without any make-up on. 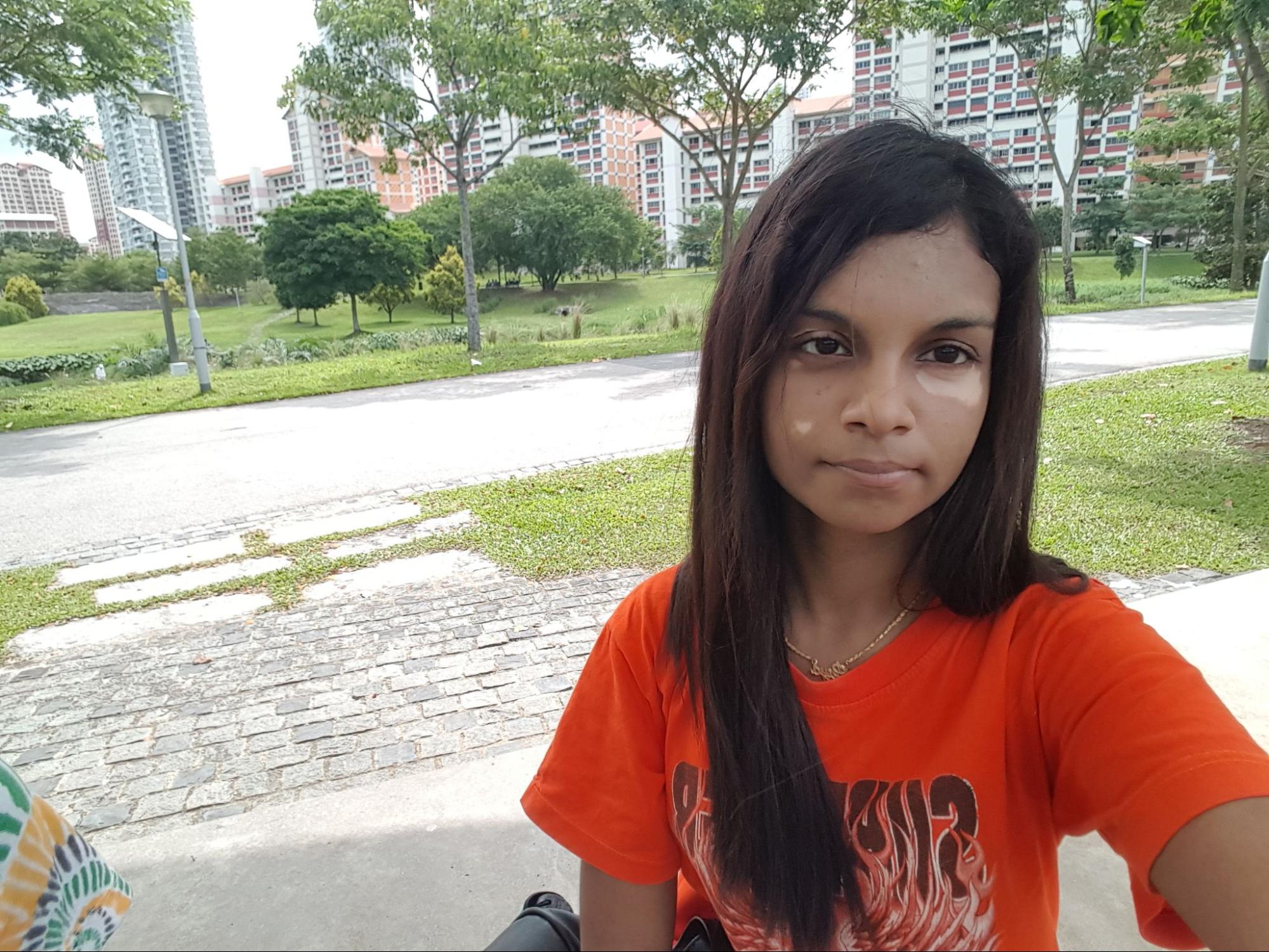 As I stepped into university, I was also lucky enough to share my skin-story through a presentation about famous people with unknown backgrounds – for a module on Communication in Mass Media.

Choosing Michael Jackson as my idol, I talked about his physical and mental battles with vitiligo, and why I felt a personal connection with this relatively hidden part of his life. There were a few widened eyes from the large lecture-hall, but it felt good to finally go beyond my comfort-zone.

It felt like my first victory in overcoming this challenge, plainly because what had been a “shameful” secret back then had transformed into a story of personal pride in under five minutes. 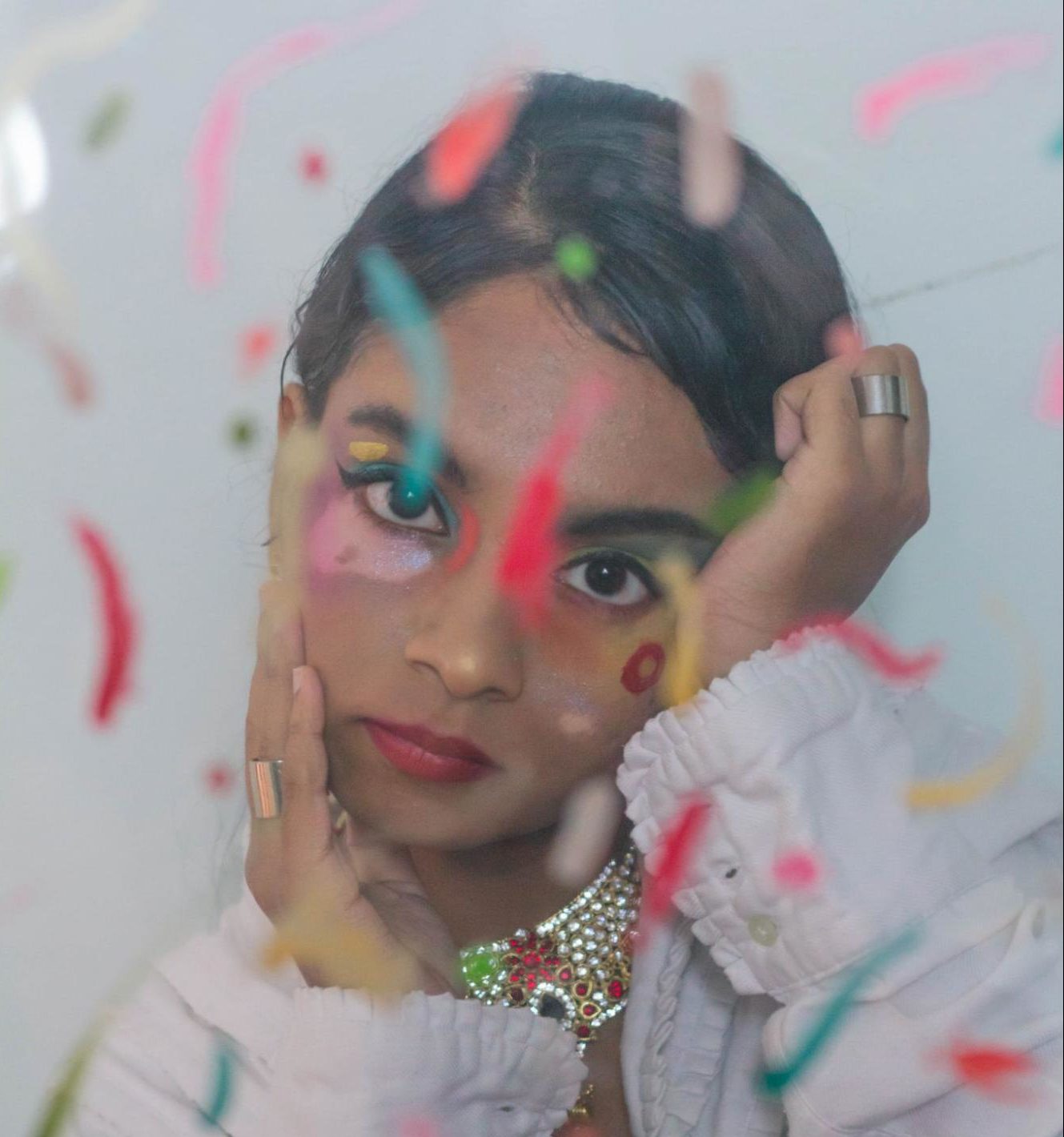 Later on, I also gained an opportunity to talent for my friend who organises photoshoots in her leisure time. I was pretty nervous as I’d never dived into something this adventurous before, but decided to heck it and go ahead with the new endeavour.

Wearing different outfits and posing in front of a camera without covering up my vitiligo was something I never thought I’d do, but it did wonders in making me believe that I was worthy, too.

Compared to the girl who was preoccupied with her physical appearance in secondary school and JC, I began realising that looks were only short-lived as I stepped into my twenties. Instead, I focused on performing my best in university and working on passion projects that made me feel genuinely happy.

Even as I write this today, it feels rewarding to be breaking free from the shackles of fear that held me captive as a teenager. From crying in school toilets to crafting my story for others to read or relate to, journeying with vitiligo has been nothing short of a roller coaster ride.

In the future, I hope I can gain opportunities to support people who are going through similar skin conditions as me – and assure them that sometimes, it’s okay to be different.

Growing up with vitiligo in Singapore

Most vitiligo patients would agree with me that compared to the physical ailment, the emotional one is monumental. But looking back eight years later, I wouldn’t trade this experience with anything else because without it, I wouldn’t have learnt these important life lessons along the way.

Do I still receive nasty remarks and weird looks from people? Yes, but I try to take these comments with a grain of salt because in the grand scheme of things, they don’t weigh anything at all.

Whether you have eczema, quirky birthmarks or just suffering from severe acne, they don’t determine who you are and what you’re capable of. 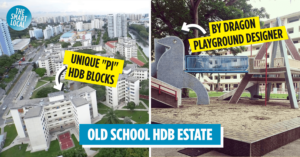 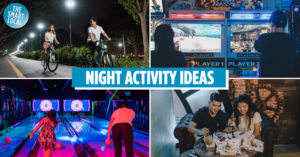