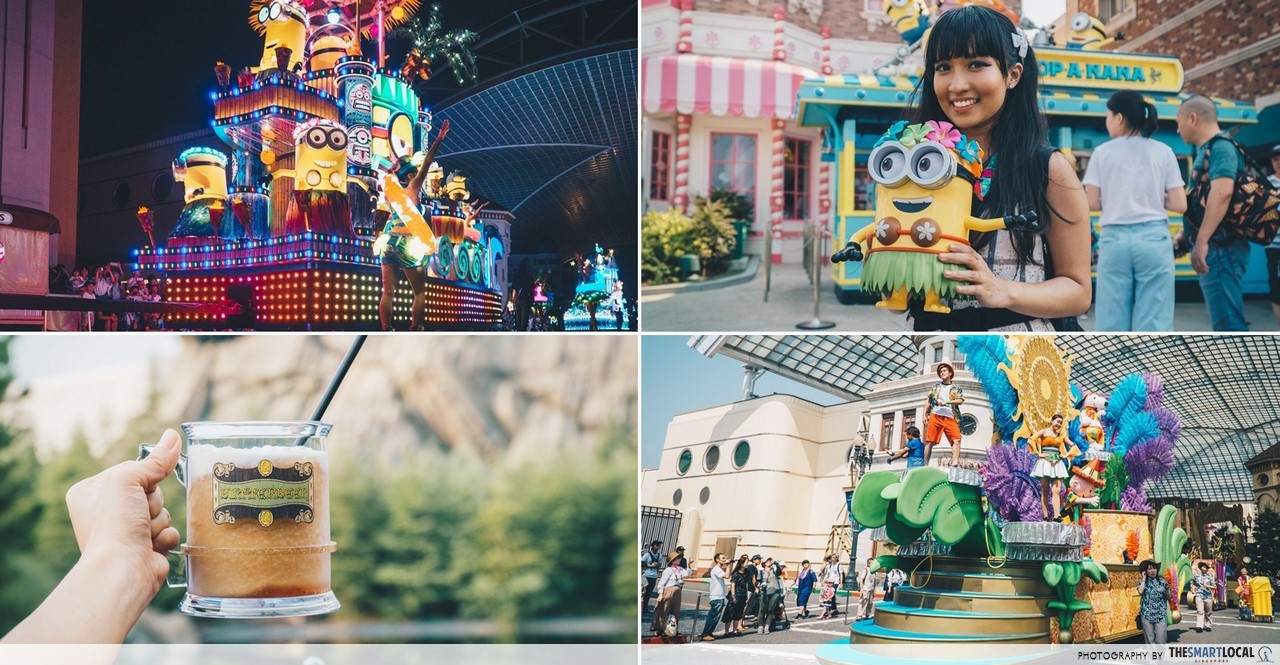 Most of you have probably visited Universal Studios Singapore at least once by now. But if you think experiencing one theme park from the franchise means you’ve seen it all, you’re wrong. So wrong. Universal Studios Japan in Osaka is on a whole other level; For one, it’s way bigger, the rides are different, and they’ve got zones we don’t – including Minion Park and The Wizarding World of Harry Potter.

We’re not surprised at all that it was voted the #1 Amusement Park in Japan for the second year running. 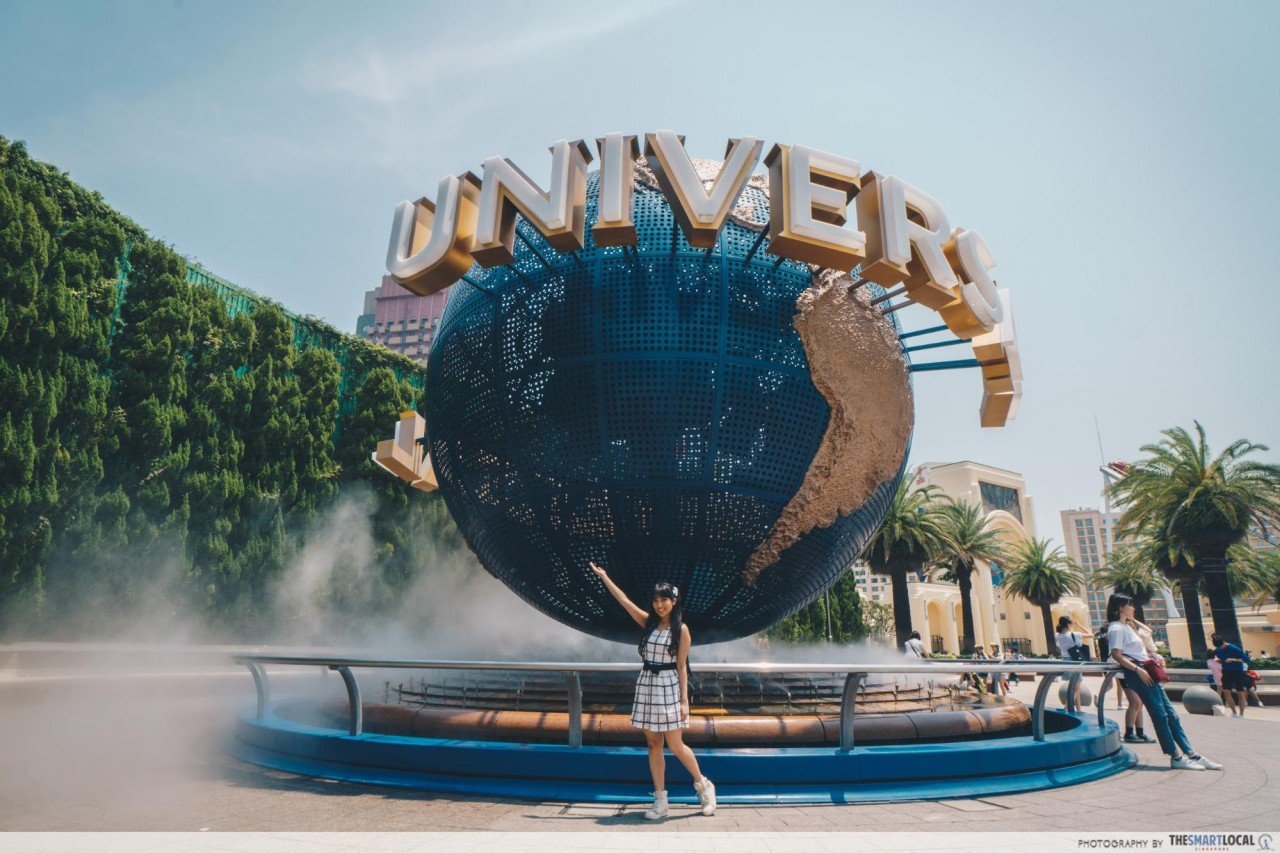 This Summer, Universal Studios Japan has added a slew of new as well as limited-time offerings for all to enjoy. From a dazzling night parade to exhilarating VR coasters, there are loads of fresh features which will wow both first-timers and repeat visitors. Here are the highlights which will have you itching to book a flight to Osaka, stat.

P.S.: We skipped the queues by pre-purchasing e-tickets through Klook. Read on to find out more.

1. Get soaked in a water parade and “snow” fight

Now, the general consensus is that people don’t enjoy getting drenched – which is why umbrellas exist. But put your reservations aside and get soaked in the Water Surprise Parade – it’s a whole lot of fun and a real treat in the blazing Summer heat. 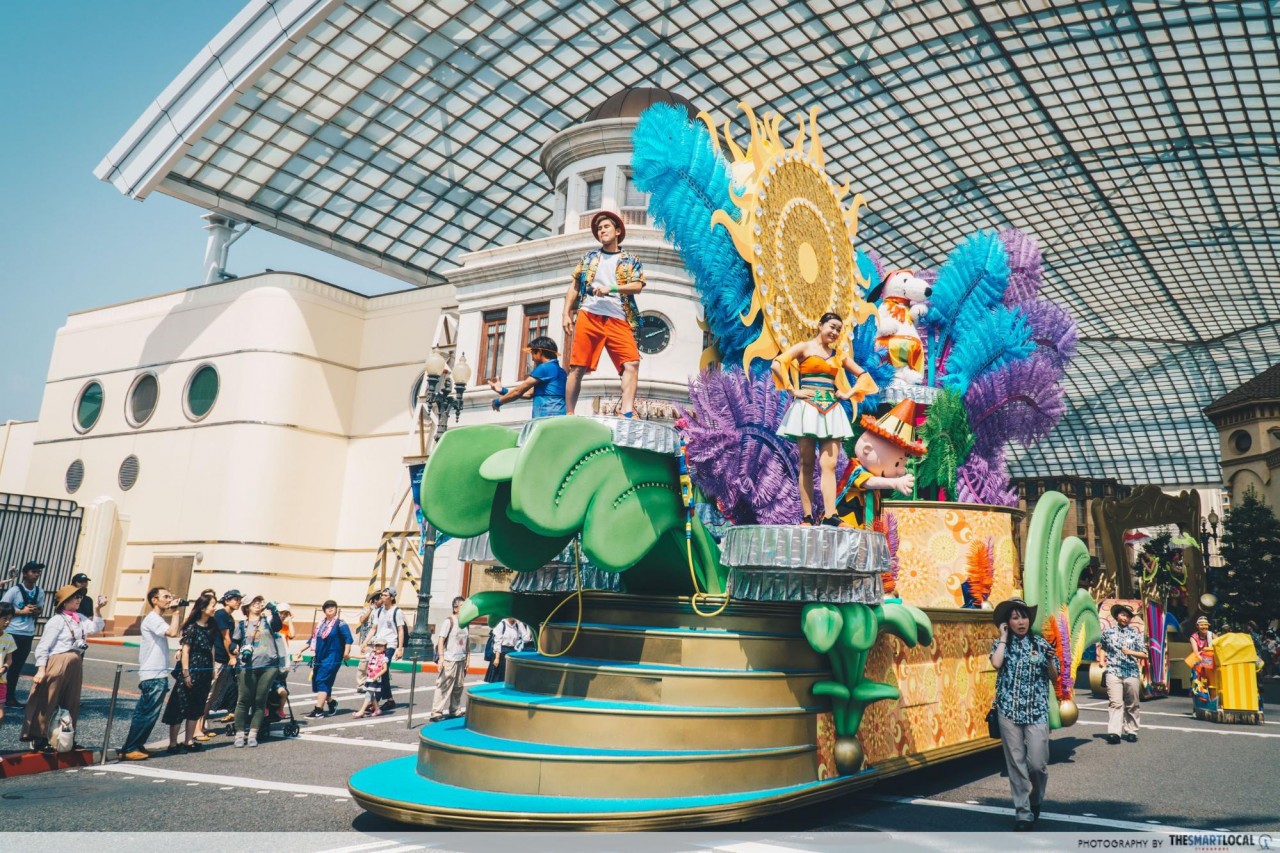 The parade will have a series of character-themed floats cruising by in song and dance, before ending in a friendly water fight, where performers will shoot at you with water guns and even splash buckets at you. The best part? You’re encouraged to take aim at them too! 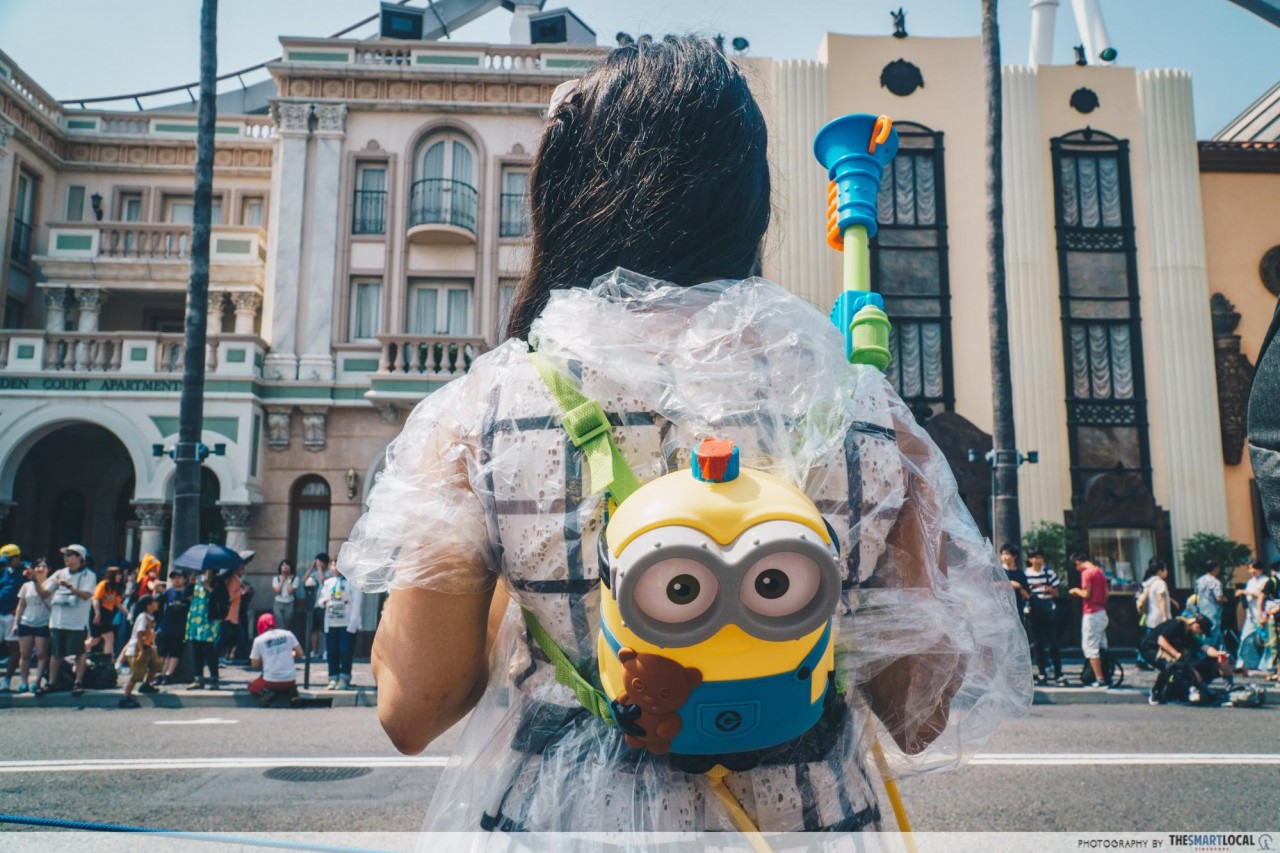 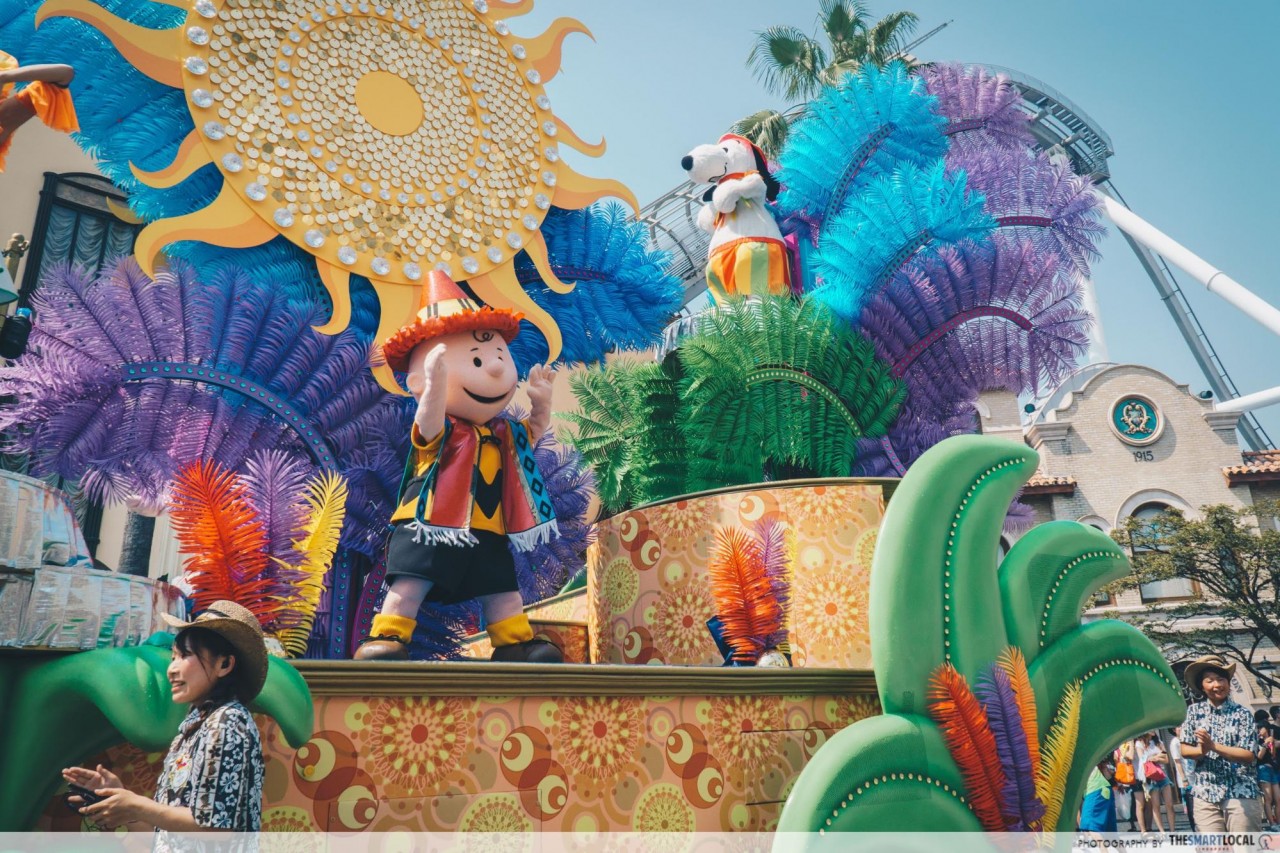 Another water activity to camp for is the Minions Snow Fight. Other than streams of cool water from toy guns, there will also be “snow” (made from crushed ice) being thrown at the audience during the performance. The ice is crushed really finely, so it’s super soft – and super shiok when it hits you.

There’s also the One Piece Water Battle, a live show where Luffy and the Straw Hat Crew fight the Marines to acquire great treasures. And yes, water guns and audience participation are part of the whole shebang too!

Tip: Bring a disposable poncho if you’d rather not carry a change of clothes with you

2. Zoom along on the revamped Harry Potter and the Forbidden Journey 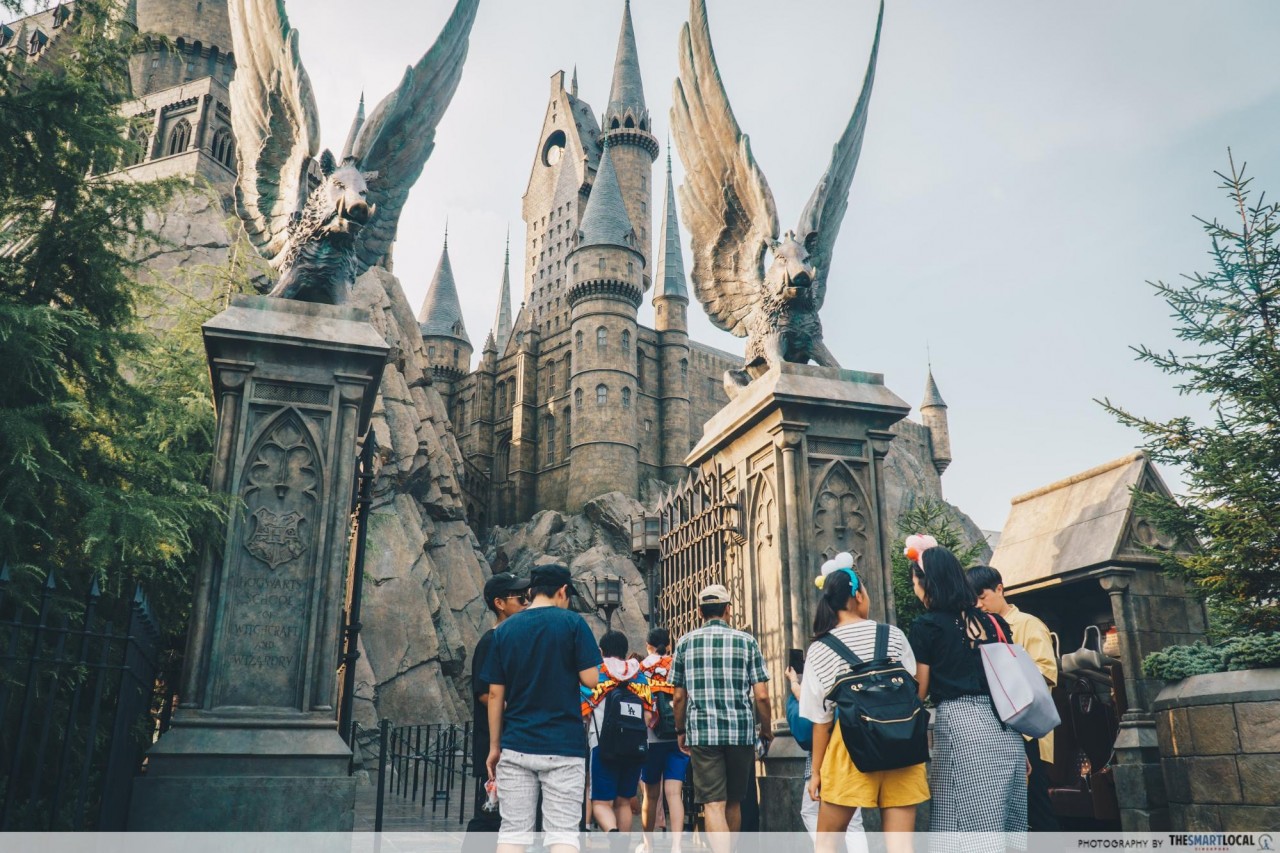 The Harry Potter and the Forbidden Journey ride has been a hot favourite at Universal Studios since conception. Now, its hyper-realistic graphics have been taken to even greater heights, such that 3D glasses are no longer required.

A 360-degree view will have you fully immersed in iconic scenes of the mystical Wizarding World, as you journey through Quidditch matches, swarms of Dementors, and scuttling spider clusters. It’s as close to flying on a broomstick as you’ll get!

P.S.: Brace yourself for the hot blast of air that’ll come your way when the dragon spits its flames!

3. Get your hands on a limited edition Minion popcorn bucket

The great thing about theme parks is that they’re complete no-judgement zones – so getting a Minion popcorn bucket and proudly hanging it around your neck as you go along is NBD. Because chances are, others are doing it too. 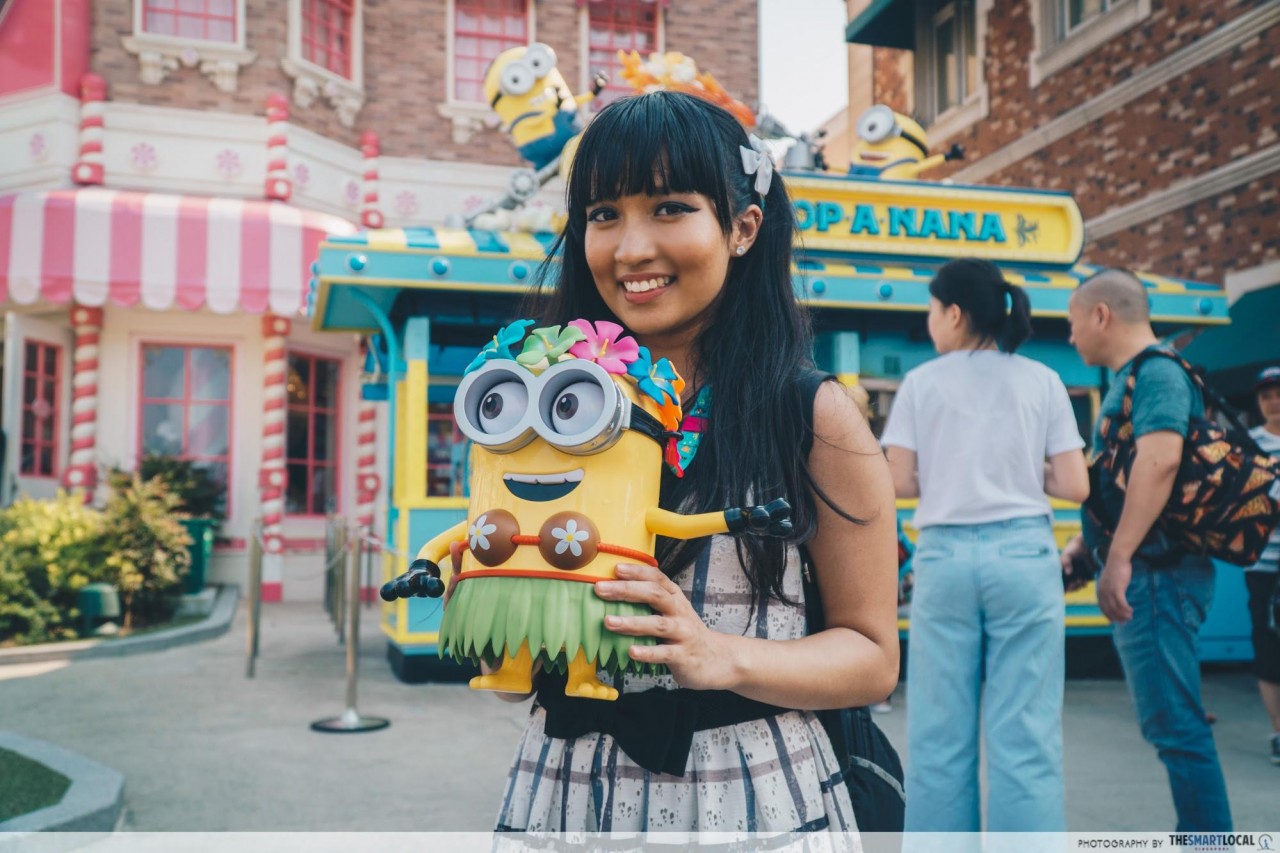 For a limited period of time, you can get your hands on these cuties in a special Hula Dancer getup, complete with colourful flower lei. And it’s not merely regular popcorn they contain. It’s banana popcorn. BA-BA-BA-BA-BA-NANA! 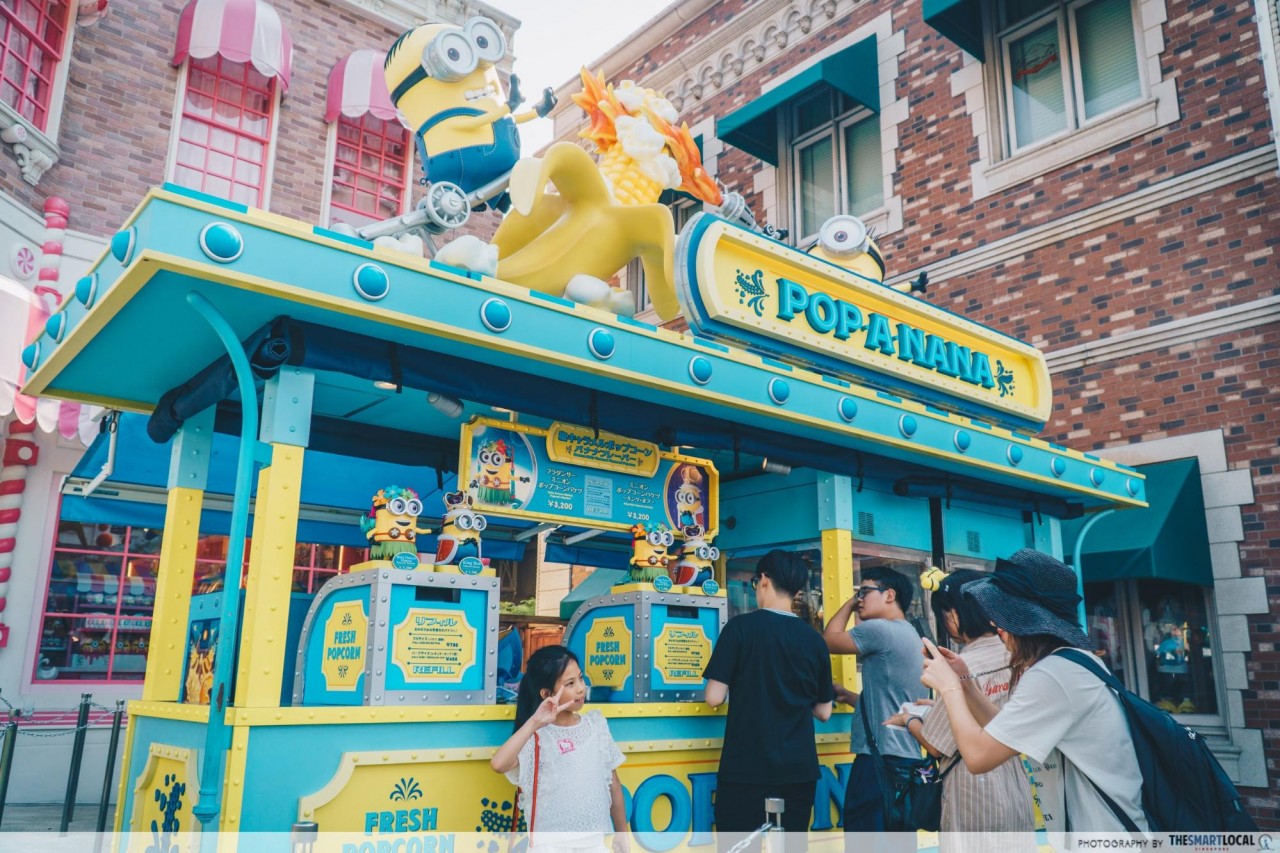 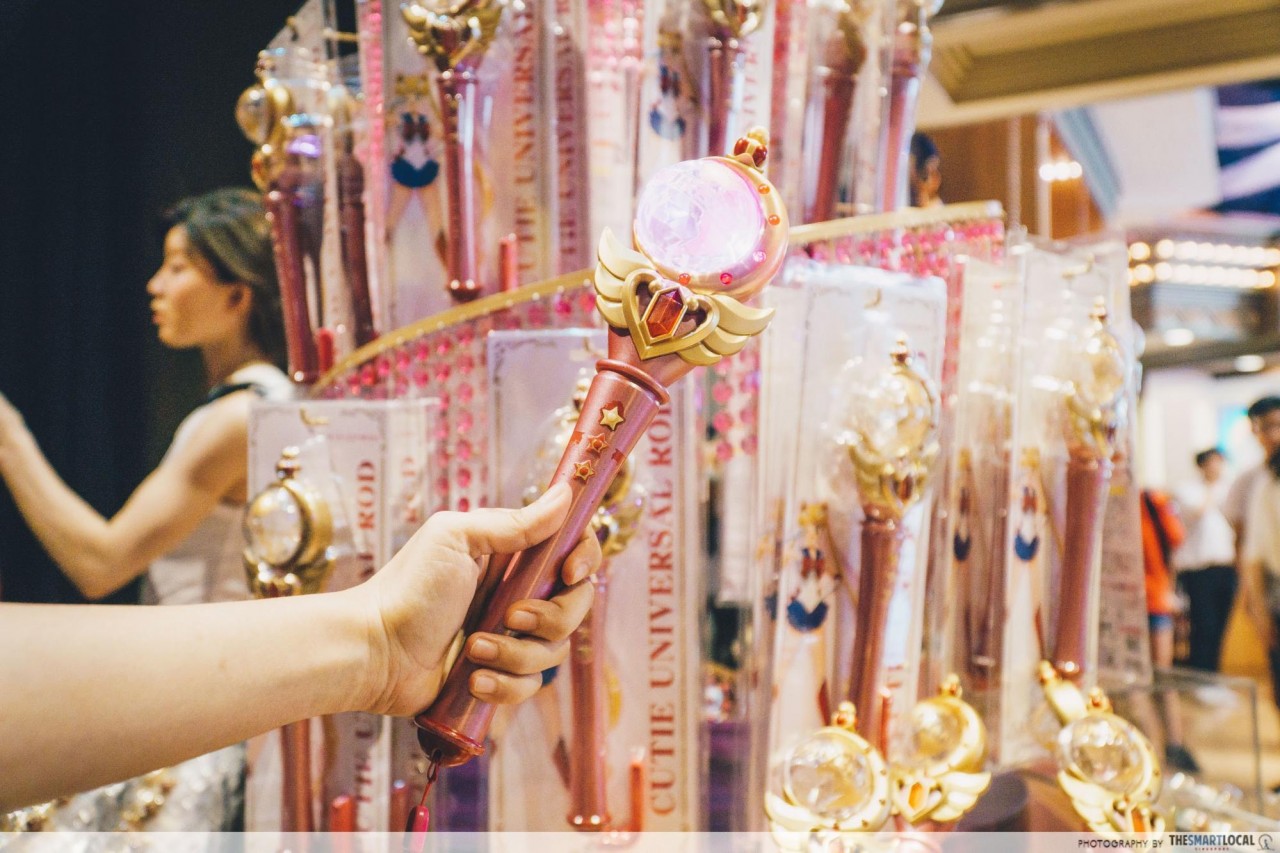 “Fighting evil by moonlight, winning love by daylight…” That’s exactly what happens during Pretty Guardian Sailor Moon: The Miracle 4-D. We won’t give any spoilers, but expect to join your favourite Sailor Guardians like Usagi and Mars in battling it out with an evil force. 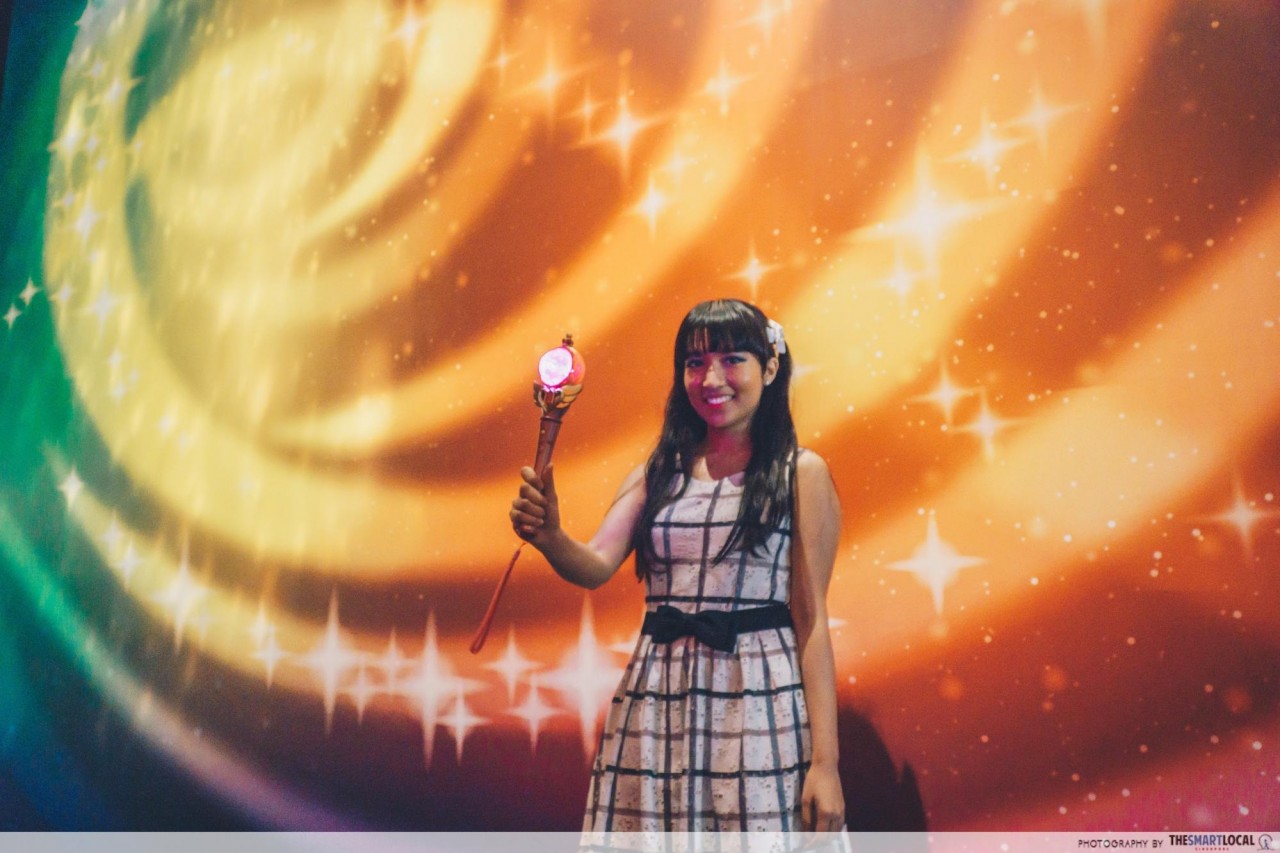 Photo op: borrow one of the wands and stand in front of the psychedelic galaxy backdrop to channel your inner Sailor Guardian 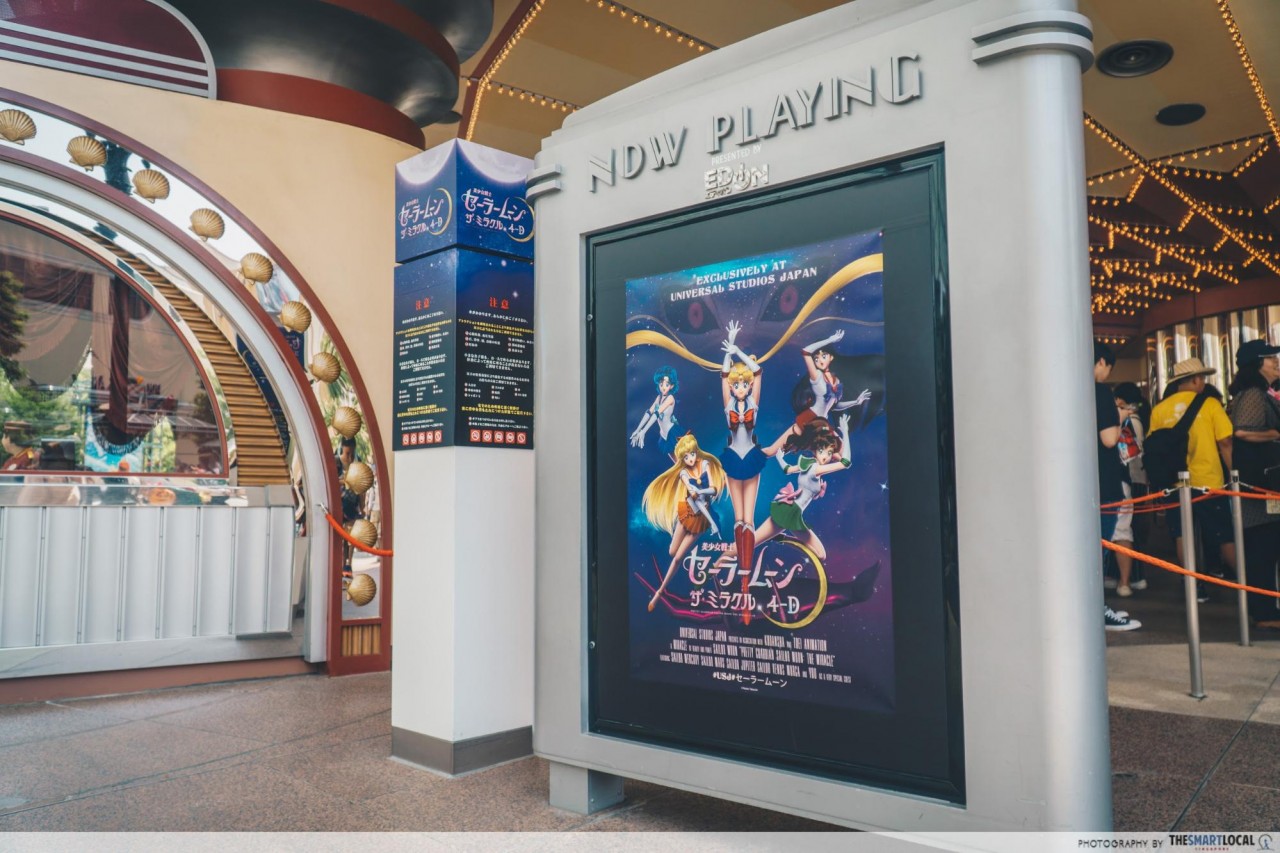 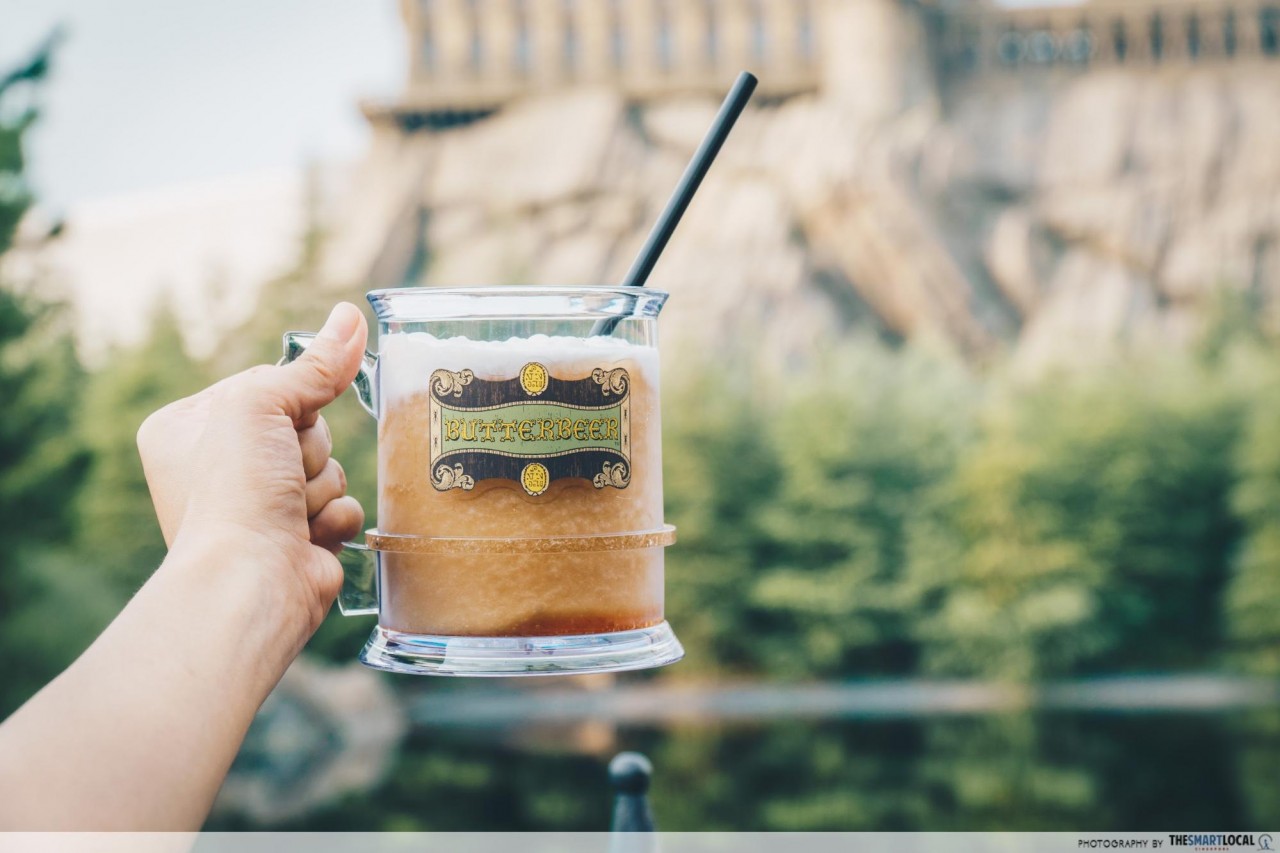 What’s better than Butterbeer? Frozen Butterbeer, that’s what. Get this Summer exclusive at the Three Broomsticks Restaurant, and chug away against the view of the grand Hogwarts castle and serene lake in the background. 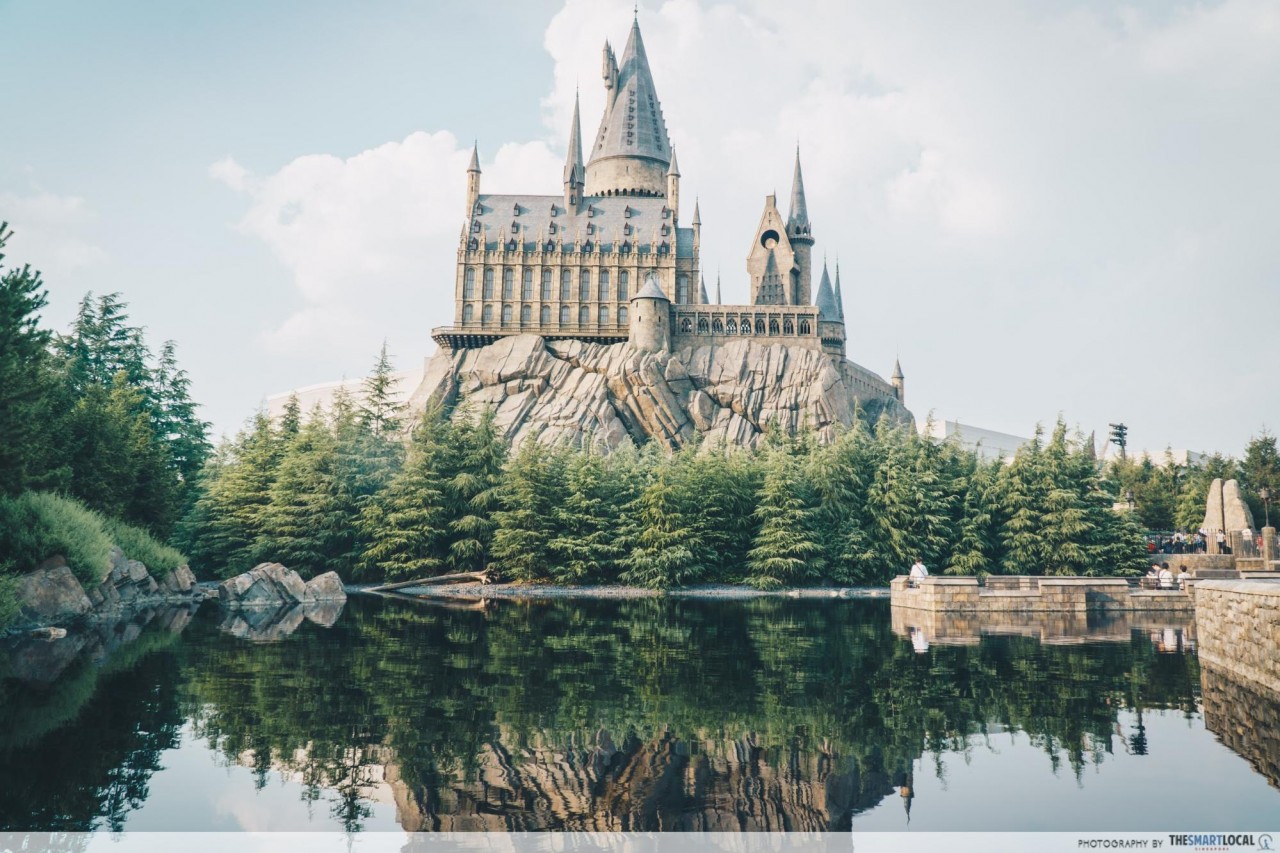 It was this Potterhead’s first time trying the non-alcoholic drink, and I can vouch that it’s truly as magical as everyone claims it to be – treacly and creamy, with a hint of caramel. Kind of like butterscotch in liquid form. J.K. Rowling would approve. 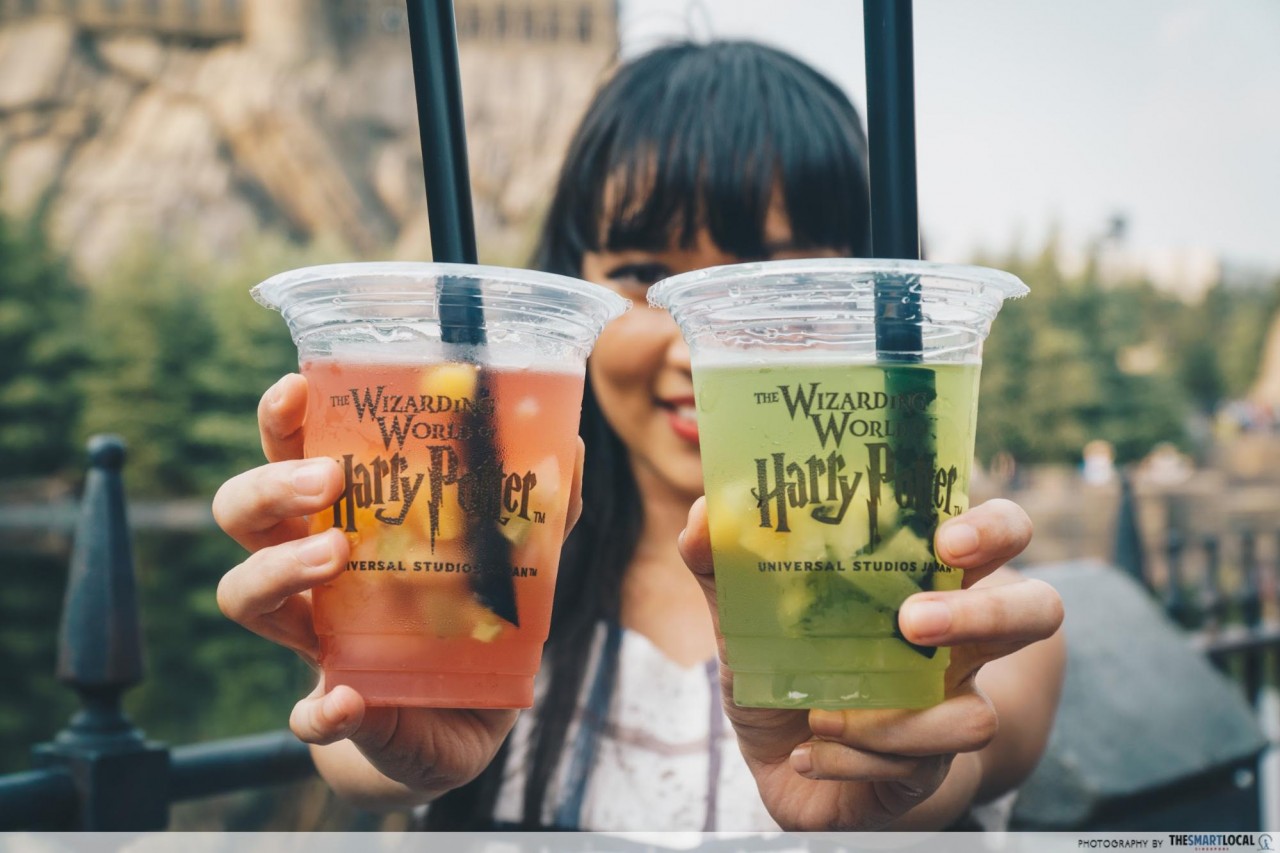 Other drinks you can get here this season are melon- and strawberry-flavoured Fruit Drink Jelly which come with fruit bits.

6. Scream your lungs out on the virtual reality Evangelion XR Ride 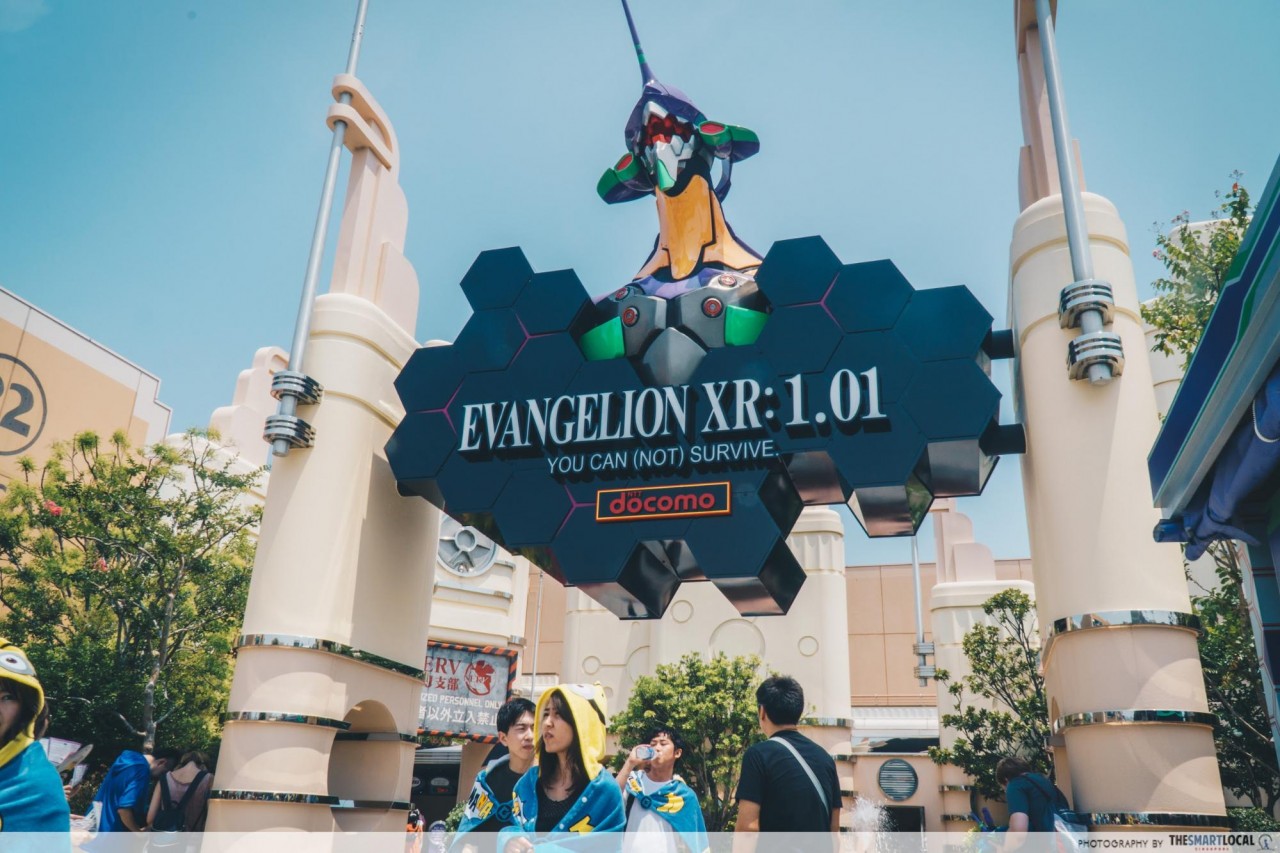 Those who tend to squeeze their eyes shut during roller coasters would want to try prying your peepers open for once on the Evangelion XR Ride. You’ll be wearing a VR headset during this one, so instead of seeing coaster tracks in front of you, you’ll be transported to a realistic anime landscape from the series, featuring scenes of destruction and falling buildings.

The actual drops in the ride aren’t overly terrifying, but the whole VR aspect heightens the intensity of the whole experience. Even as a thrill-seeker who’s difficult to faze, I was thoroughly exhilarated.

7. Slide around on “ice” with Freeze Ray Sliders 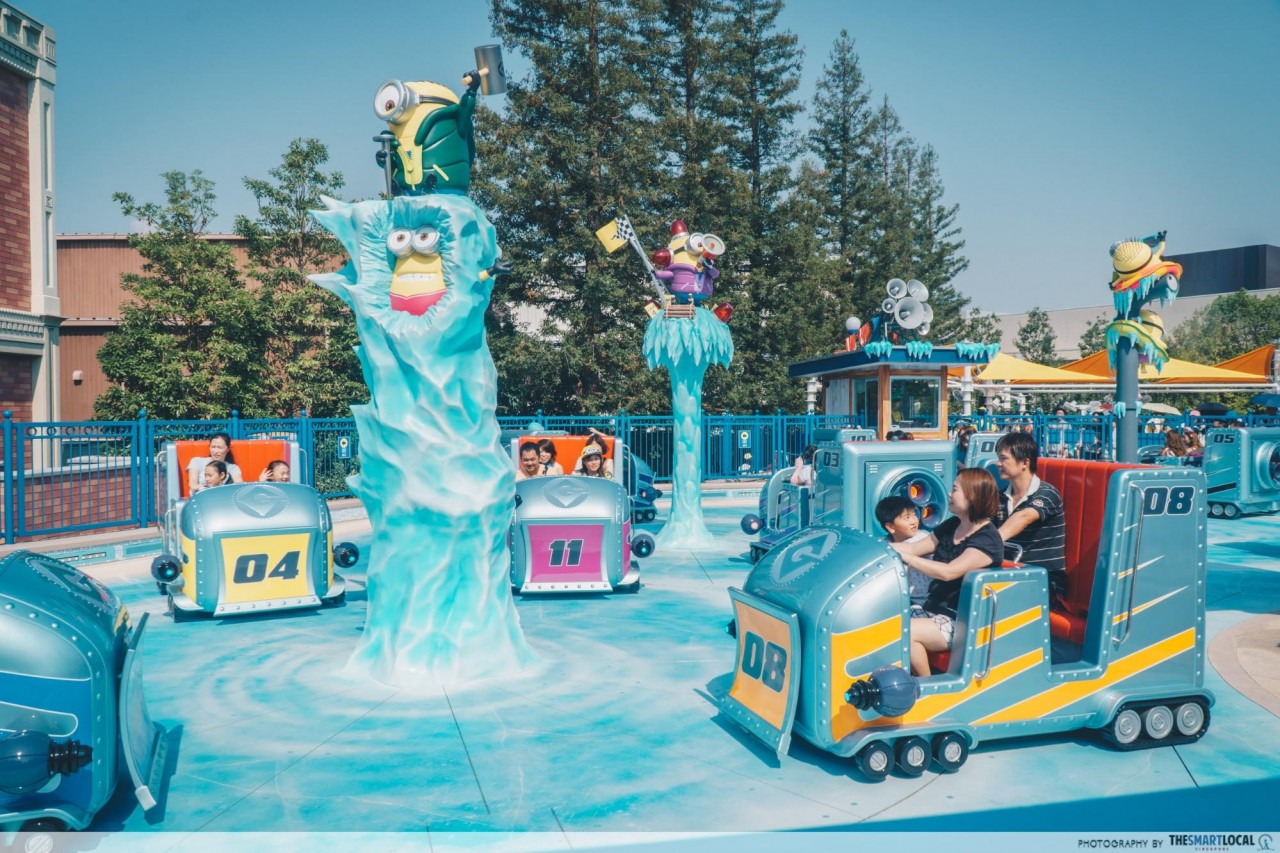 Think of Freeze Ray Sliders as an upgraded version of the traditional teacup ride – featuring Minions. The story goes that the mischievous yellow critters have used Gru’s ray gun to freeze the pool into an ice rink – and you get in on the fun too by slippin’ and slidin’ around on it in a little vehicle.

At some points, there will even be a gentle cold mist blowing at you, which helps add to the intended effect of gliding on ice. 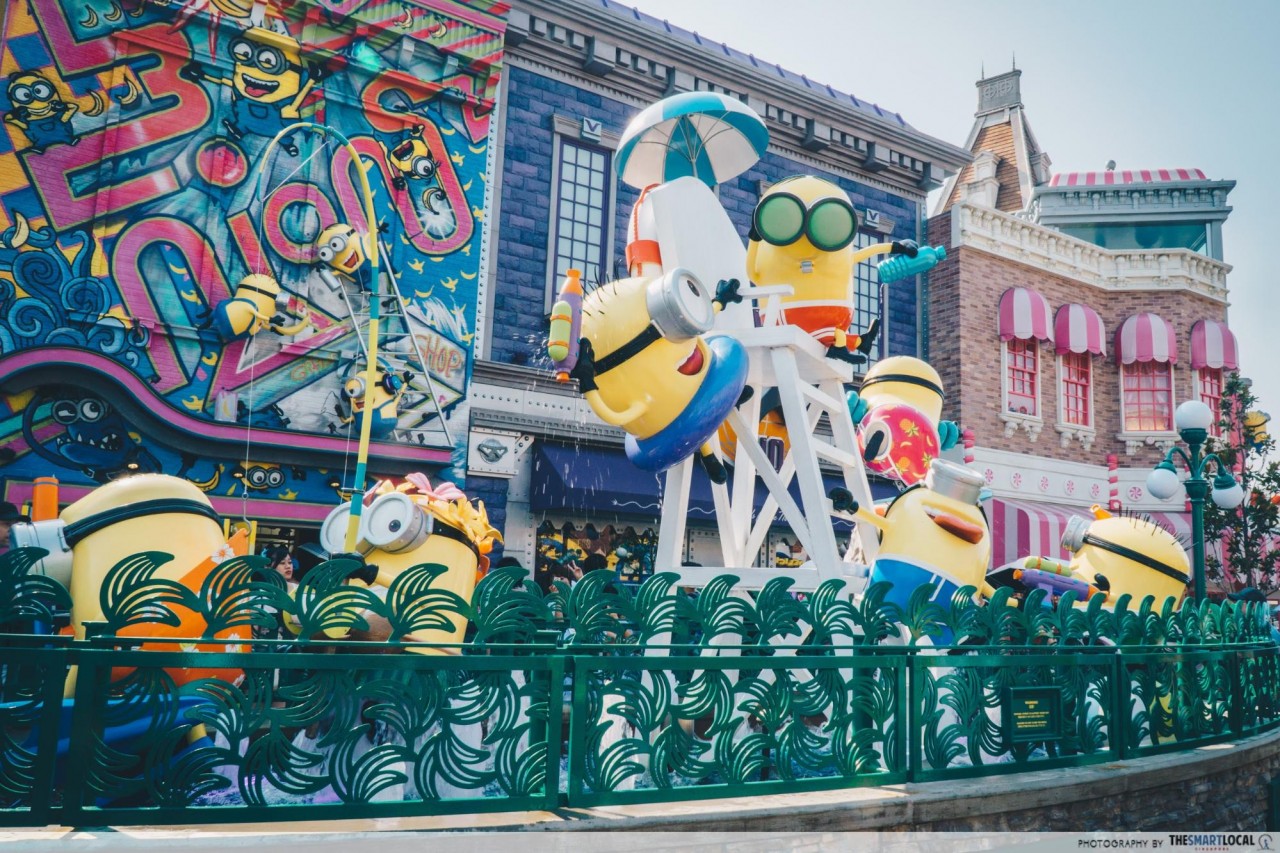 8. Fuel up with Minion- and One Piece-themed food and drinks 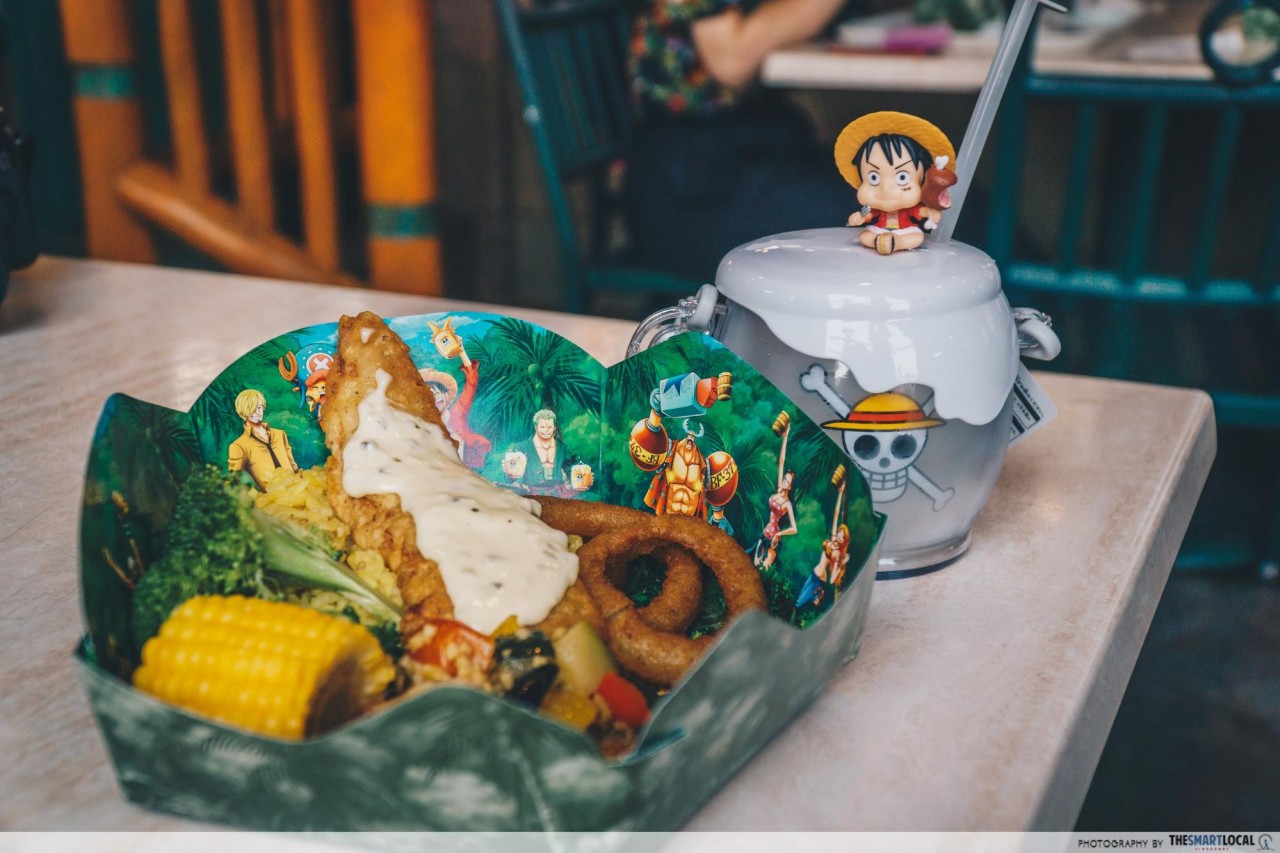 Universal Studios Japan has got its themed elements down to a T, even where food and drinks are concerned. Fuel up at the Straw Hat Crew’s Feast Restaurant with some filling One Piece-themed nosh, with a choice of beef, fish, or chicken. 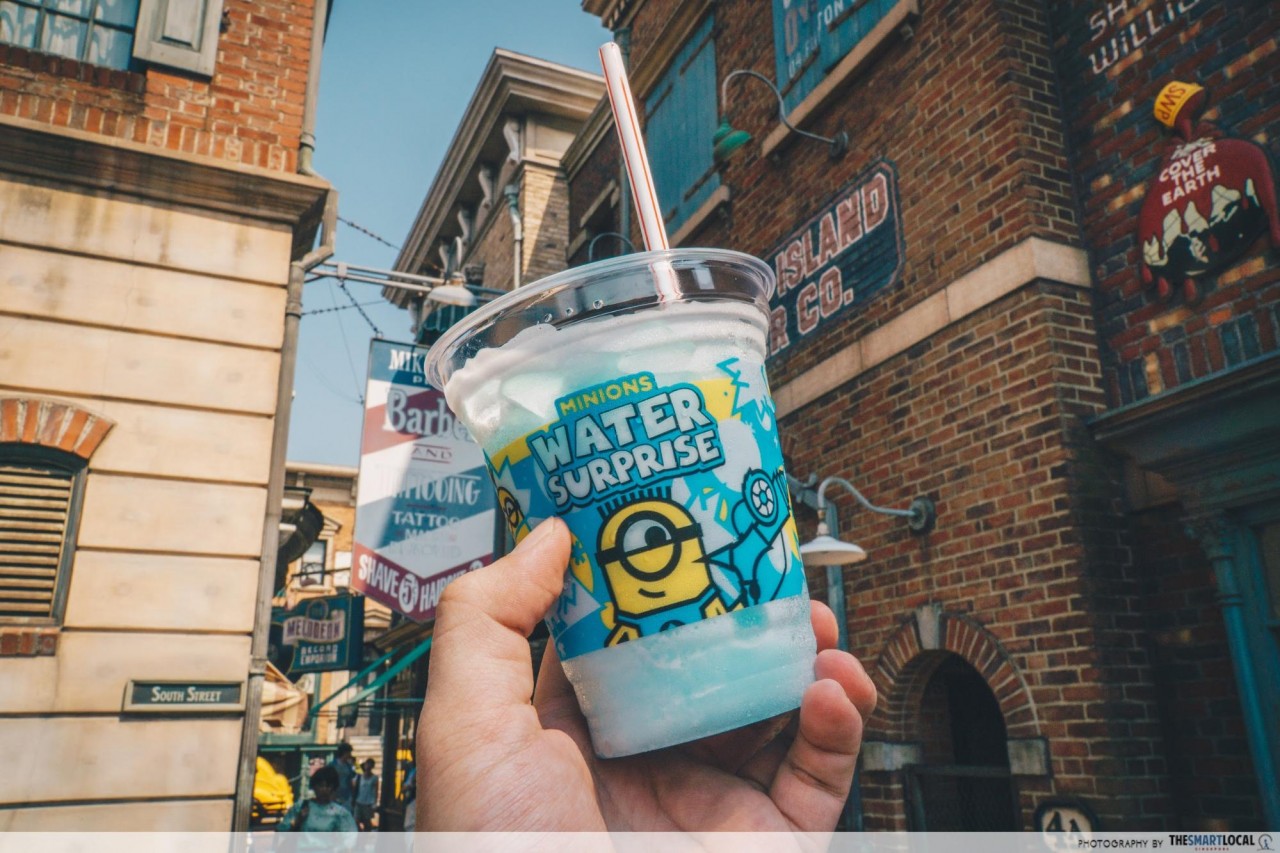 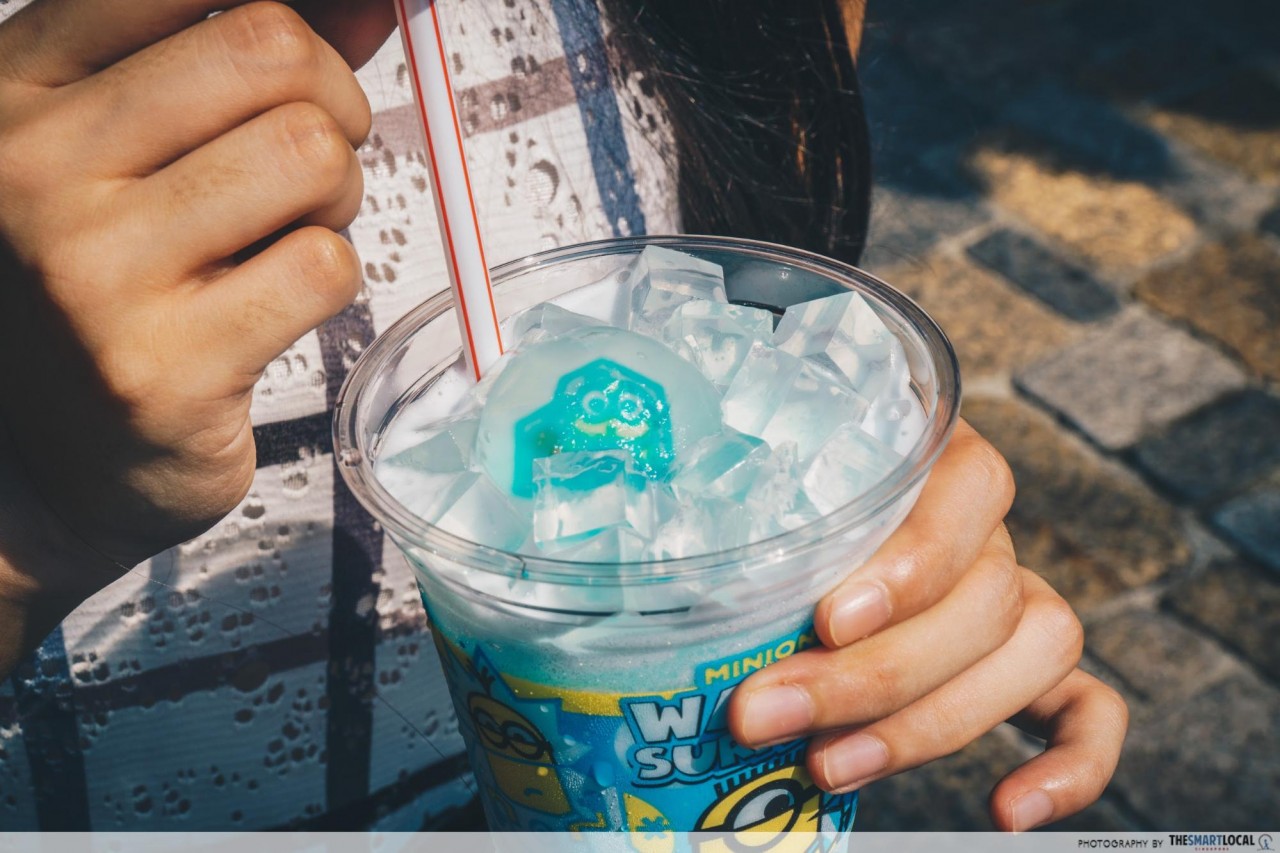 True to the theme, the drink also comes with cute Minion jelly! 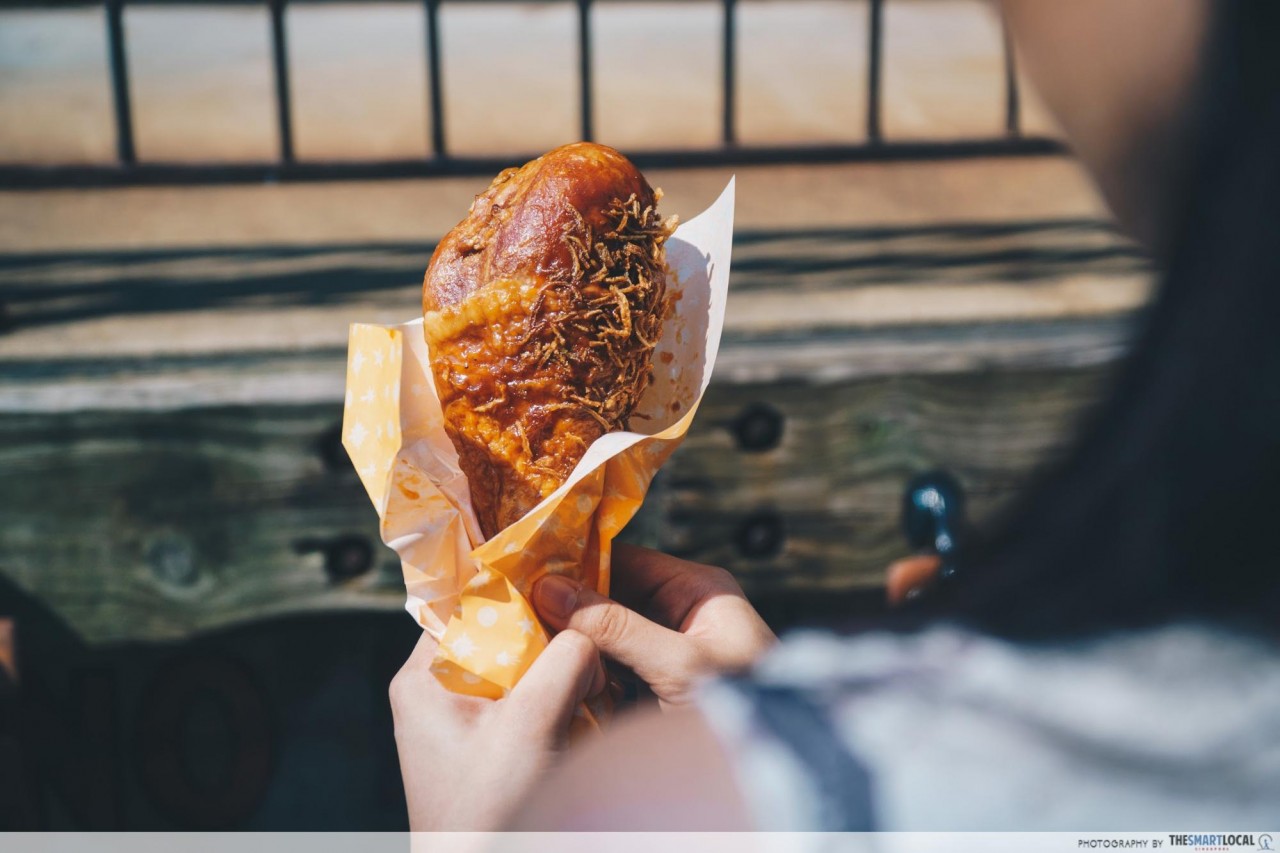 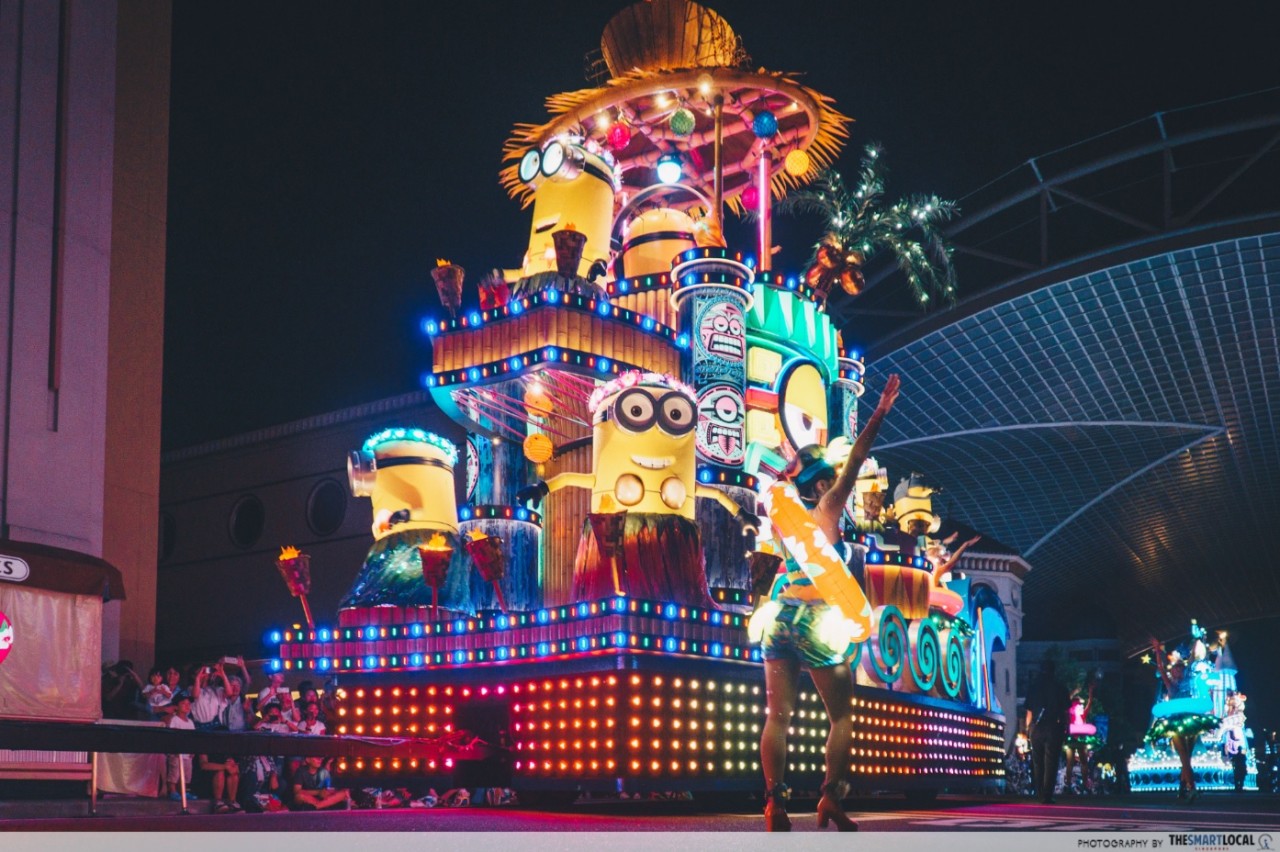 Don’t make an immediate exit after finishing all the rides! Stay a while longer for the cherry on the cake – the Universal Spectacle Night Parade: The Best of Hollywood. As its name suggests, the parade will feature many of your favourite characters from movies including Transformers, Despicable Me, and Harry Potter. 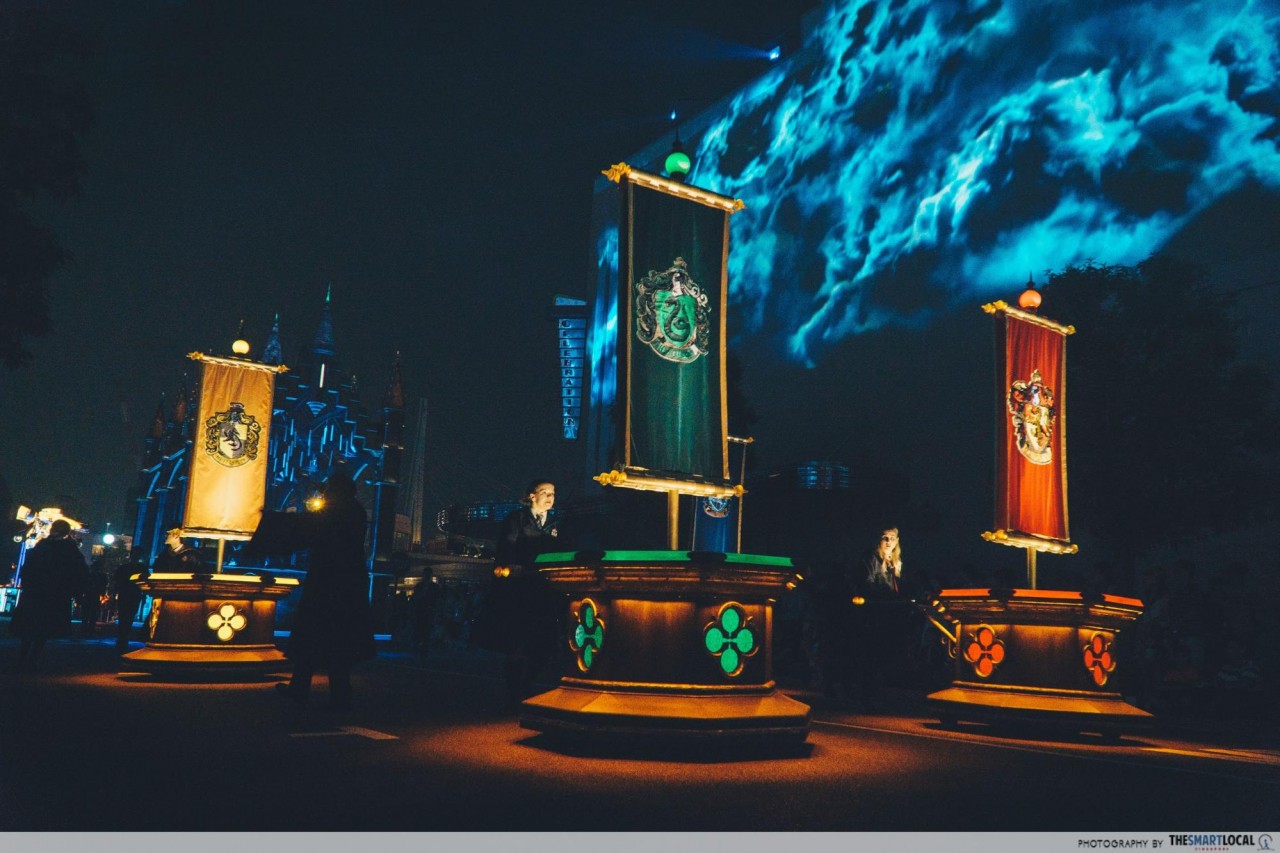 The flashing lights, well-detailed floats, and energetic performance in general are already dazzling on their own. But what makes this spectacle extra special is the projection of animated backdrops on the buildings along the parade route – making each float sequence all the more immersive and eye-popping. 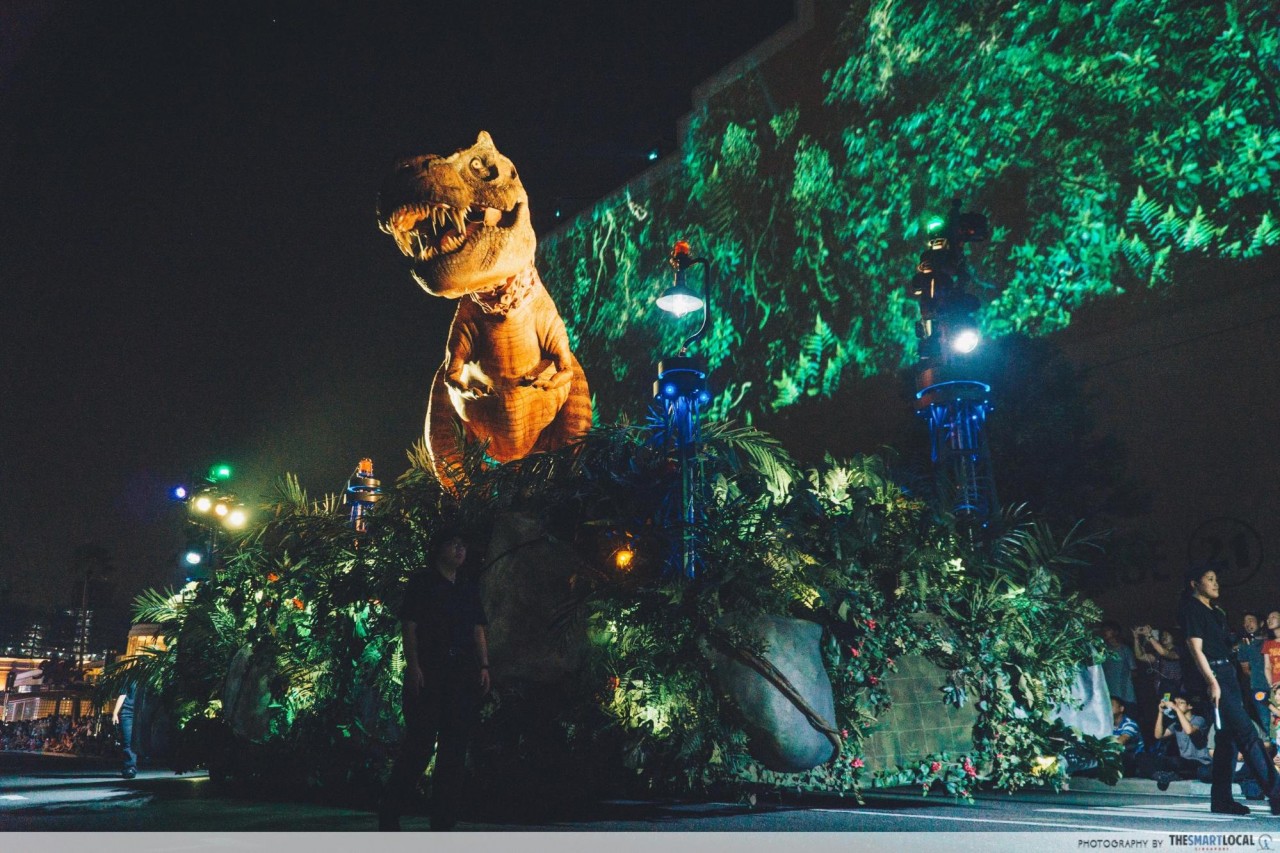 A roaring T-Rex from Jurassic Park makes an appearance

A fair bit of audience interaction was involved, and we especially enjoyed the part where the raptors from Jurassic Park escaped from their cage and came up close to us while the “rangers” tried to keep them at bay.

Instead of waking extra early to wait in line before the theme park opens, skip the queues and get a best-price guarantee by booking your Universal Studios Japan e-ticket through Klook. These e-tix don’t come with fixed dates, which means they’re still useable if plans change midway. 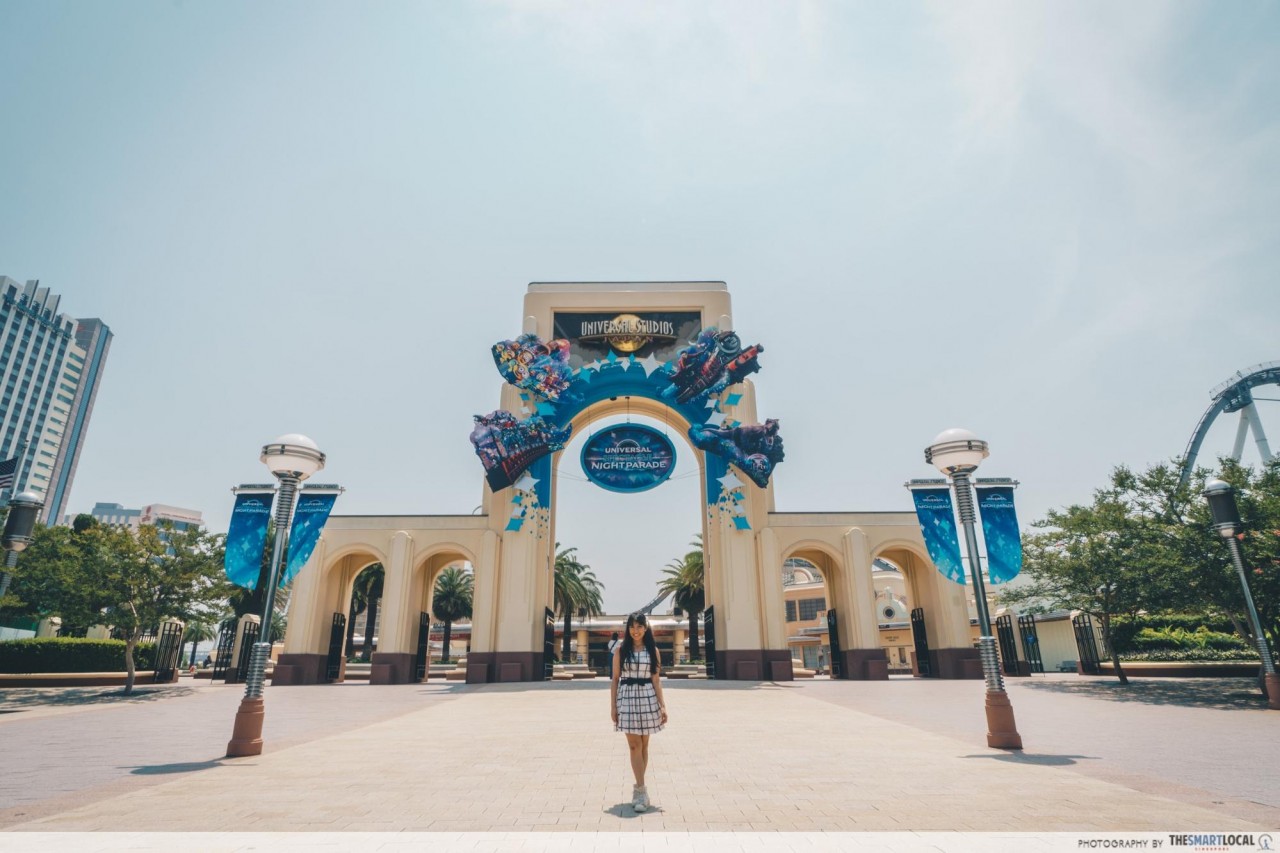 And instead of carrying wads of cash for souvenirs, get a Universal Studios Japan JPY5,000 Shopping Coupon from Klook, which will allow you to receive S$61.40 worth of shopping credits at the discounted rate of S$58.35*. 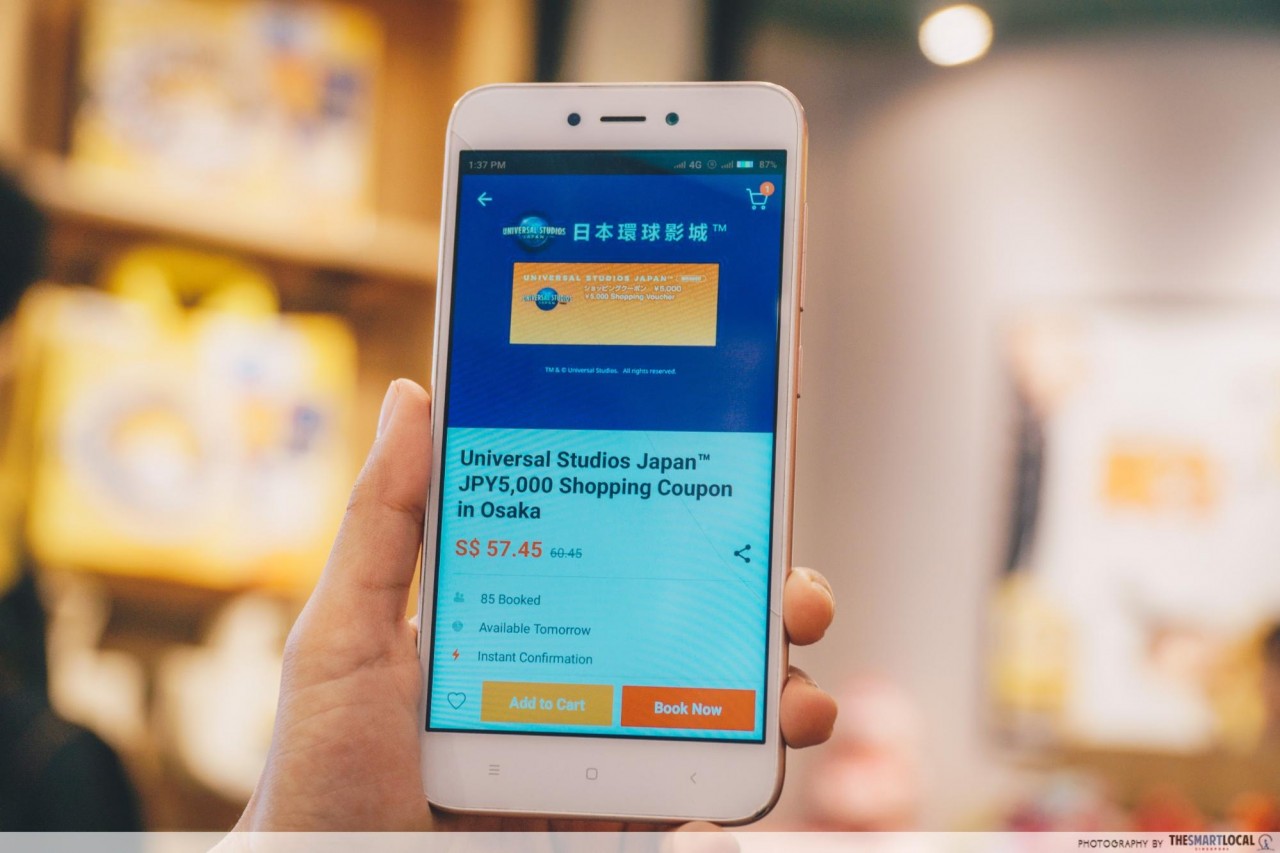 This coupon will be especially useful if you’re planning on mass-buying gifts for friends back home, or are a serial collector of movie merch

If you’re going to be touring other cities in the Kansai region, opt for a ticket package which comes with the Kansai Wide Area Pass.

Many of the Summer activities featured here will be on for a limited period of time, so make your flight bookings to Japan quickly to avoid missing out on all the fun! But even if you can’t make it this time, Universal Studios Japan updates their offerings frequently, so keep your eyes peeled for down the road.

Get your Universal Studios Japan™ tickets through Klook here!

Note: Do not buy tickets from unrecognised retailers – you’ll be easily found out and your tickets nullified at the gate. Make sure you purchase from an authorised seller like Klook to avoid wasting moolah on unusable tickets.

*Values will vary based on exchange rates. The coupon can be used at any souvenir store within the park, but note that no change will be given.

Read our other Osaka-related guides here:

This post was brought to you by Klook. Photography by: Don Lim