Moving from Singapore to England to further my studies, I got to learn things that went beyond my degree – like learning not to call random strangers aunty or uncle, and knowing the difference between a chip and a crisp.

Adapting to life in the land of fish and chips was quite the experience, but it sure made me miss the little quirks of home- and here are 10 Singaporean “privileges” you’ll only appreciate after some time abroad:

1. Late night activities do not revolve around alcohol and clubbing

Many cities around the world are known for becoming ghost towns as soon as the clock hits 6PM, except for the few restaurants and bars that open till late. Living in a student town in the UK was no different. 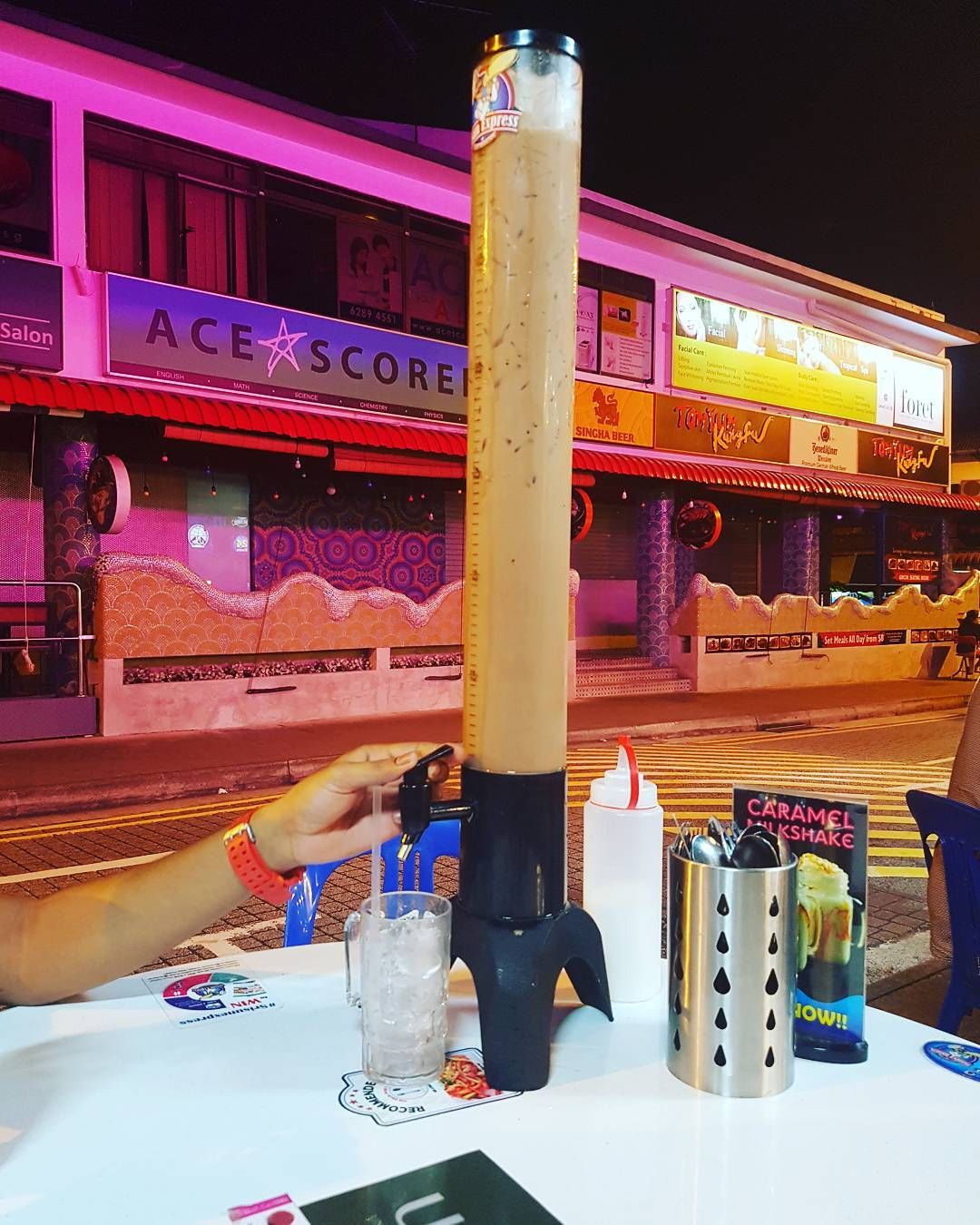 A ginormous Milo tower is our drink of choice. Source: @the.secret.mermaid

As the sun goes down in our good ol’ Lion City however, the night’s only just getting started. It isn’t all about partying till dawn though – I’m talking late night roti prata runs, 24/7 prawning sessions and even shopping for groceries at the one and only Mustafa. Shiok!

We’ve all been there – It’s 2AM and the hunger pangs have managed to kick in despite having had one heck of a dinner. We’ve got a tonne of trusty supper spots to hit, but there’s only one thing on our minds: McDonald’s. 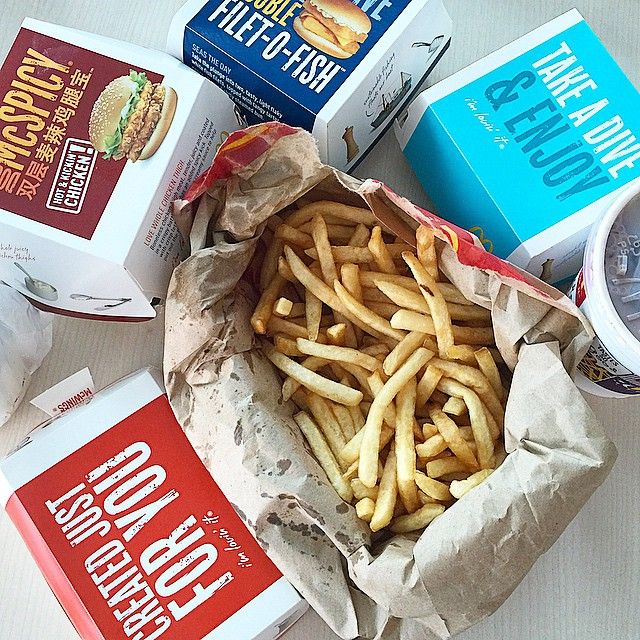 Get. In. My. Tummy. Source: @wensdelight

So, imagine my horror when I found out McDelivery didn’t exist in the UK! Yep. There I was, cold and hungry, with no hope of getting any McNuggets in my tummy anytime soon. *screams internally* 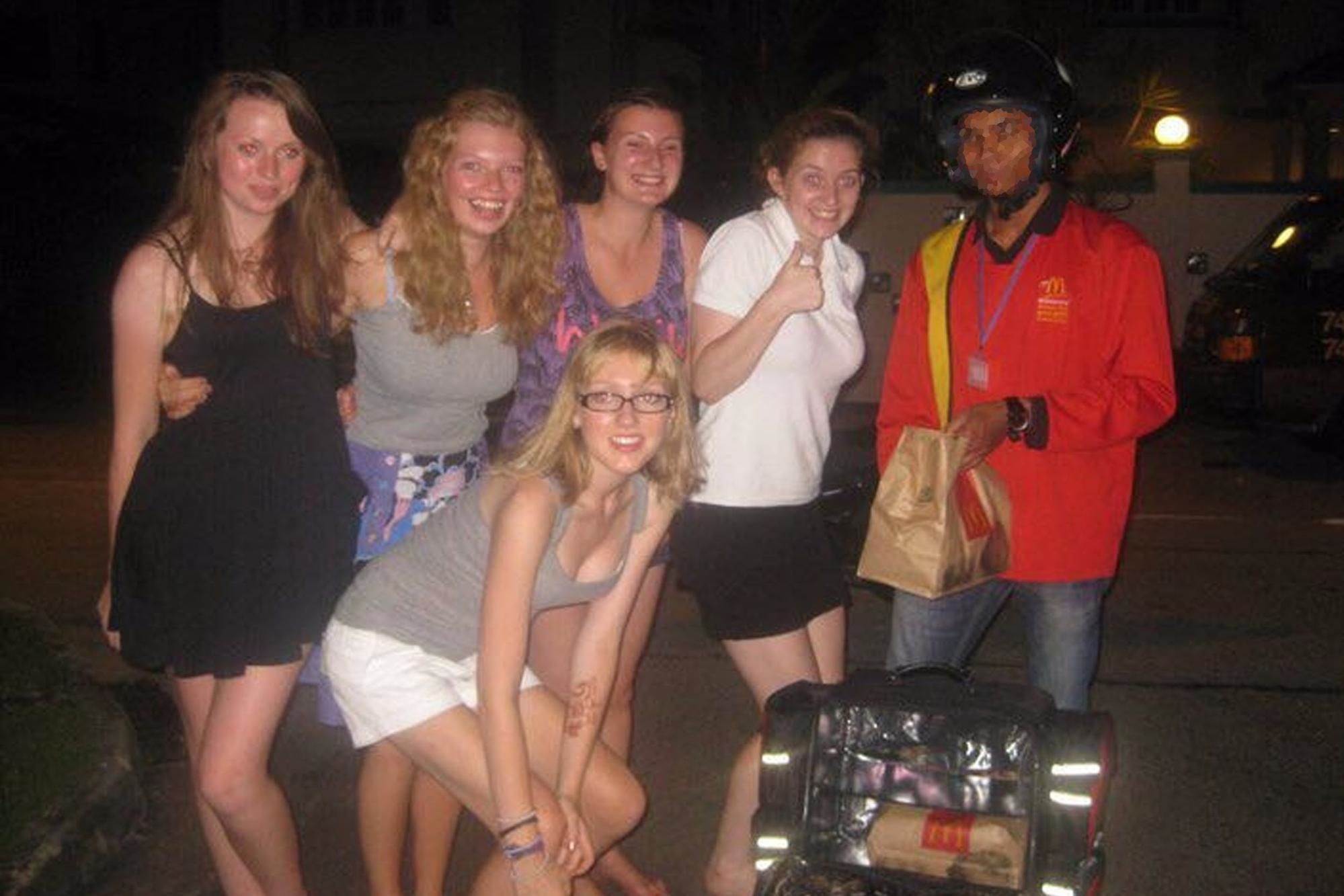 In fact, the concept is so foreign that when a friend’s mates from the UK ordered McDelivery for the first time in Singapore, they just had to get a snapshot to commemorate the moment. :’)

3. Not having your personal space “invaded” by awkward small talk

Striking up a conversation with someone on the MRT isn’t necessary unless it involves the phrases “excuse me!” or “can move in please?”. So when a random old lady asked me “You alright, love?” while I was sitting in the Tube (London’s metro system) minding my own business, I went straight into stranger danger mode.

Simi love? Was I her long-lost grandchild? Turns out, she was just being really friendly.

Don’t be too quick to write Singaporeans off as raging anti-socials though. Rather, we’re more of a quiet bunch who’d prefer not to engage in pleasantries – ever.

4. Cheap and legit hawker food that will not rip you off

Prior to life in the UK, the only experience I’d had in the kitchen involved Maggi mee. But when instant noodles could no longer satiate my cravings for chicken rice and hokkien mee, I knew I had to embark on my journey to find the most authentic Singaporean food in my home away from home.

And just when I thought I’d hit the jackpot when I found a restaurant that dished out my local favourites, I ended up breaking the bank with a plate of chicken rice that cost me a whopping £5. That’s close to S$10, which could get me at least 3 packets of chicken rice back home. 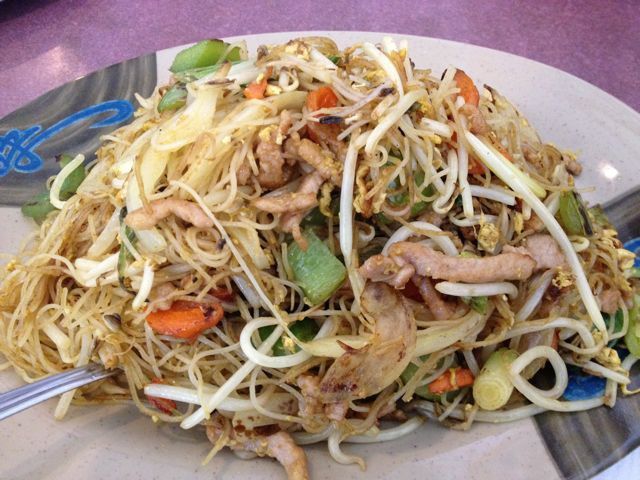 Also, “Singapore Noodles” are a scam. Don’t believe the restaurants that promise you a “taste of home” with a dish that doesn’t even exist. And err, don’t trust whatever claims to be roti prata either – they’re all imposters. All of ‘em!

5. You don’t have to wait a week to see the doctor

Sure, going to the doctor in Singapore isn’t exactly easy on the wallet. But price shouldn’t be an issue when it comes to being in the pink of health. In Singapore, we’re used to complaining about “long” waiting times at polyclinics, but sparing a few hours out of your day is nothing compared to a week!

Finding out that the UK offered free health care was great. Realising that it also meant waiting for days just to get an appointment with the doctor? Not so great.

Of course, the clinics in England aren’t going to ignore you – but unless you’ve got an uncanny ability to predict when you’ll be falling sick, prepare for priority to be given to those in need of urgent attention.

6. Our Singaporean accent is nothing to be ashamed of

I get it – the Singaporean accent can get pretty funky. And as much as I’d try not to let Singlish slip into my speech while overseas, I couldn’t help sneak in a lah or two. There’s just some form of beauty in the efficiency of Singlish:

The less syllables, the better. Or as we like to say it: Can one. Source

I even taught my friends how to use words like “abuden”, “lor” and “sia” – which, in all its hilarity, taught me that there was nothing wrong with the way I spoke.

After all, no matter how capable we are of having flawless conversations with our foreign friends, our true selves – and accents – will always resurface over a cup of kopi back home.

7. Being able to walk home fearlessly at night

I hate exercising. But when the street I lived next to in the UK was affectionately referred to as “Rape Alley”, I clocked in my daily intake of fitness by brisk walking home as fast as possible whenever I had to get home after dark.

“Aiya, Singapore so safe one lah. No one is going to mug you at random – you think people so free ah?” I used to say. But in my little English suburb that had a disturbing lack of lamp posts and shady characters smoking dubious substances in public, I suddenly wished I’d taken taekwondo when my mum asked me to. Walking home after dark? Um, no thanks!

And here’s a fun fact: There’s not much of a difference between 4AM and 4PM during winter in the UK. So just picture me scuttling home like Cinderella as soon as the sun sets.

There’re a lot of efficiencies we take for granted as natives in our own country. The convenience of being a local excuses us from a whole lot of paperwork when it comes to things like applying for school or a new job – which is something our foreign friends who live in Singapore have to deal with. 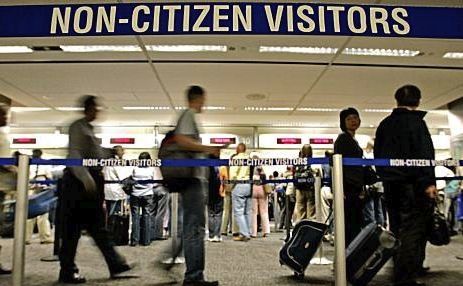 Living overseas meant no longer having these “local perks”, such as having to wait in line for hours on end at the airport immigration instead of whizzing through the priority counters for Singaporean citizens or automated clearance kiosks.

9. We can drink water outta the tap with #NoFilter

Granted that potable water is available in countries like the UK, the need for a handy dandy water filter is usually necessary. Finding questionable white specks in my cup of water had sent me into a rude shock when I first moved into my dorm – until I learned they were calcium deposits from a mineral build-up in the pipes. 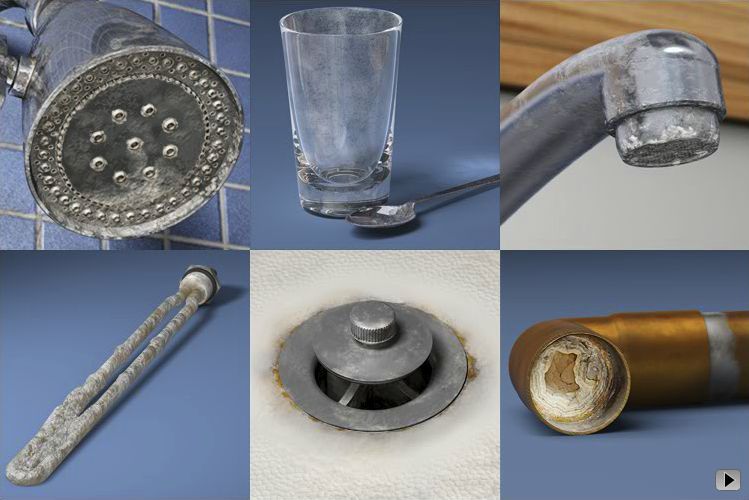 Hard water isn’t a health risk, but the mineral deposits are a complete nuisance to clean. Source

While this “hard water” is completely safe to drink, nothing beats gulping water straight outta the tap when back home – sans random particles floating around!

10. Our transport system is actually reliable

We’re no strangers to trains breaking down and buses not arriving on time. But after realising that I only had one bus that brought me to my dorm in the UK – which also “conveniently” came in 40 minute intervals – I’ve since learned to stop the incessant complaints I might have about IRIS being 3 minutes off.

We’ve also got Bus Uncle now, so you have someone else to depend on lest our bus apps fail us. 10/10 would recommend – he even cracks jokes too: 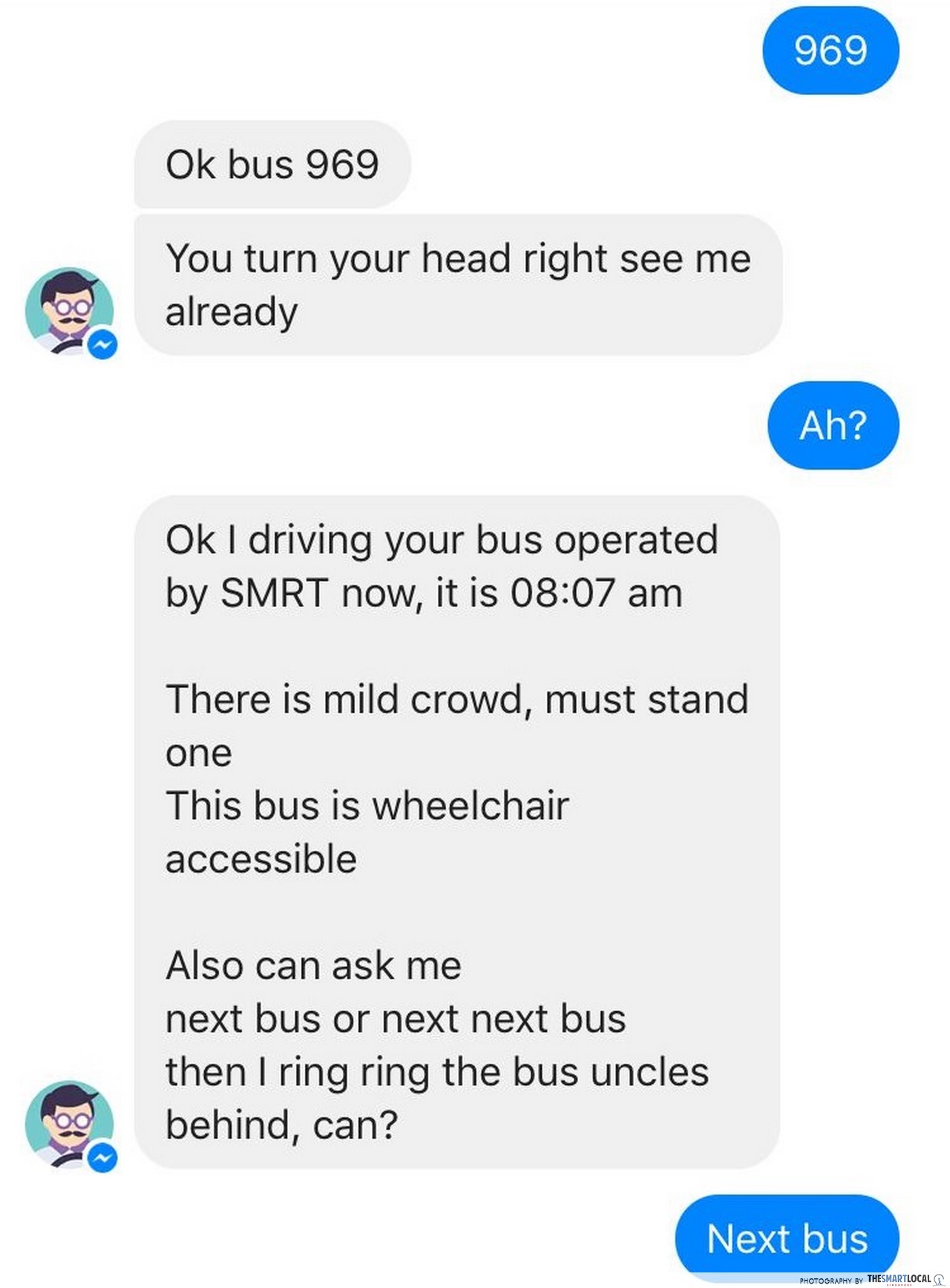 And while Singaporeans love picking on our MRT system for it’s 3 minute delays and random track faults that send us all into a state of frenzy, it’s still something we can rely on.

Being a non-native in a country 14 hours away from home allowed me to understand the struggles of foreigners back in Singapore too. Immersing yourself in a country isn’t as easy as ordering kopi or knowing when to use “can meh” or “can lah” – which is actually pretty tough for someone who isn’t familiar with our local lingo.