Singapore markets & hawker centres of the past

If you ask any Singaporean which markets and hawker centres are the best, they’ll likely recommend Newton Food Centre, Chomp Chomp and Old Airport Road, or Maxwell Food Centre if they work in the CBD.

We take a nostalgic trip to Singapore markets and hawker centres that are no longer around – way before you belanjah-ed your friends to a meal of char kway teow or chicken rice at the air-conditioned food courts that have found their way into every mall.

Food sellers in Singapore used to set up shop along the roads, but food preparation was often unsanitary and waste was poured into the open drains. Markets & hawker centres were built after Singapore’s independence so that hawkers could be relocated into housing estates and food could be sold in a more hygienic manner.

One of the earliest under the government’s hawker centre programme, Empress Place Food Centre, was opened in 1973 and housed an impressive 98 stalls under its iconic blue roof. 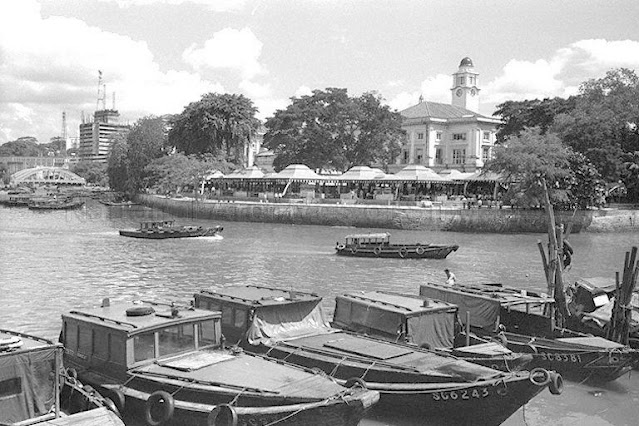 Not to be confused with Empress Road Market & Food Centre, which is currently at Farrer Road, Empress Place Food Centre stood next to where the Asian Civilisations Museum is now, and provided riverside ambience at hawker centre prices. It was a great place for an affordable dinner date before you went to Victoria Theatre or Concert Hall for a performance. 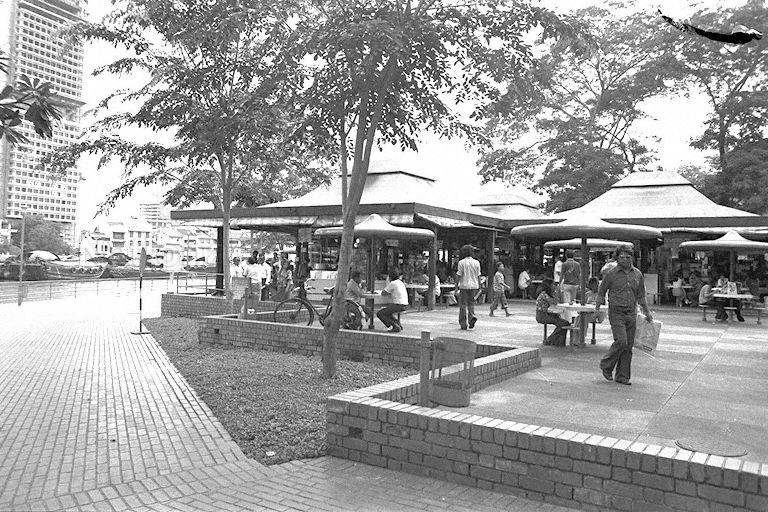 Back when bell-bottoms were rad, even as office wear.
Image credit: National Archives of Singapore

Some of the hawkers there were relocated in 1983 due to the MRT works in the area, but the food centre was eventually demolished in 1993.

Fun fact: the daughter of Hock Lam Beef Noodle’s founder started her own beef noodle stall here. Empress Place Teochew Beef Kway Teow later moved to Siglap, and then to Maxwell Food Centre. Sadly, it was a casualty of the pandemic’s dining-in restrictions and has since closed. 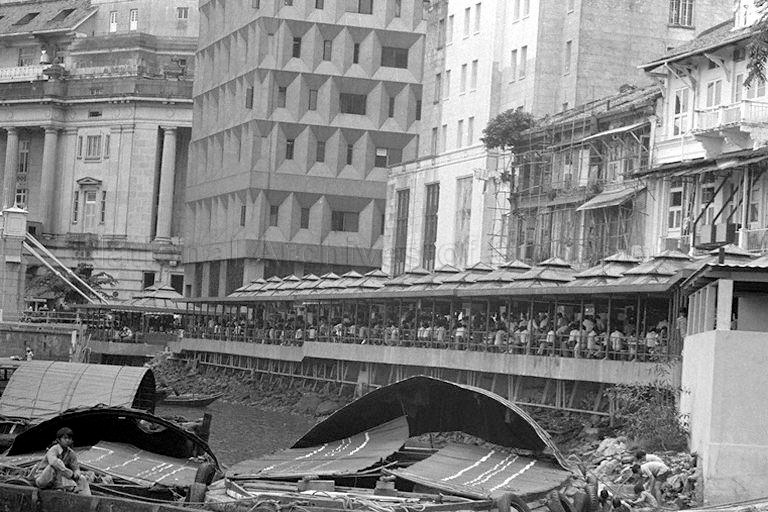 Boat Quay Hawker Centre was also known as the “super hawker centre” because of its extremely prime location in the business district. It opened in the same year as Empress Place Food Centre, back when there were still bumboats regularly cruising down the Singapore River. 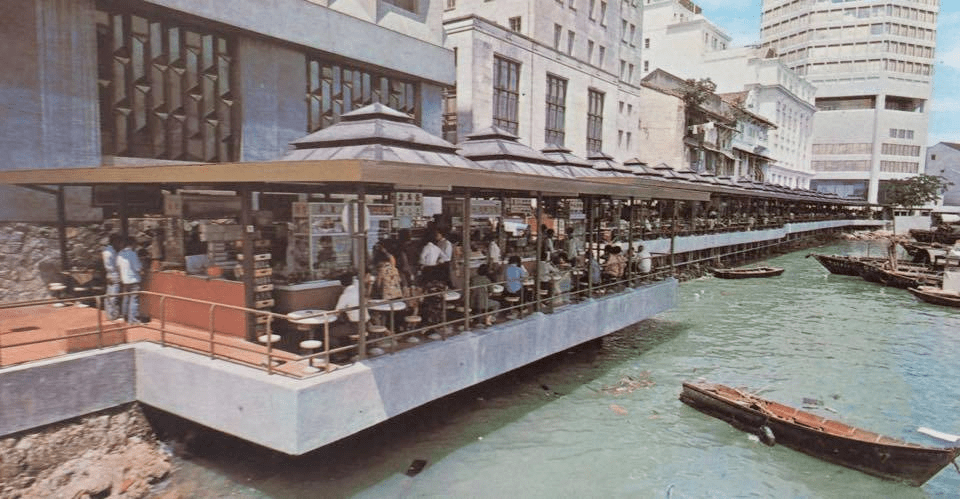 If you worked in one of the buildings nearby, chances are you would’ve gone there frequently with your office makan kakis to enjoy the famous char kway teow there until it was demolished in the mid-1990s. 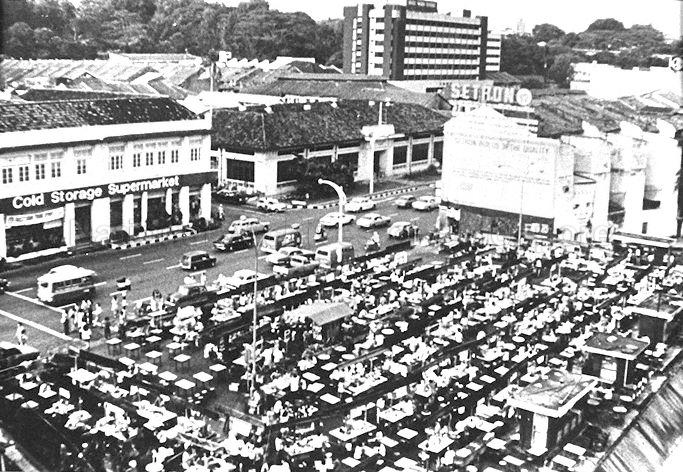 Where Orchard Central stands now was the original Glutton’s Square – car park by day, bustling open-air hawker centre by night. Due to the unscrupulous hawkers there who were known to charge tourists exorbitant rates, it also had the unofficial nickname of “Jaw’s Centre”. 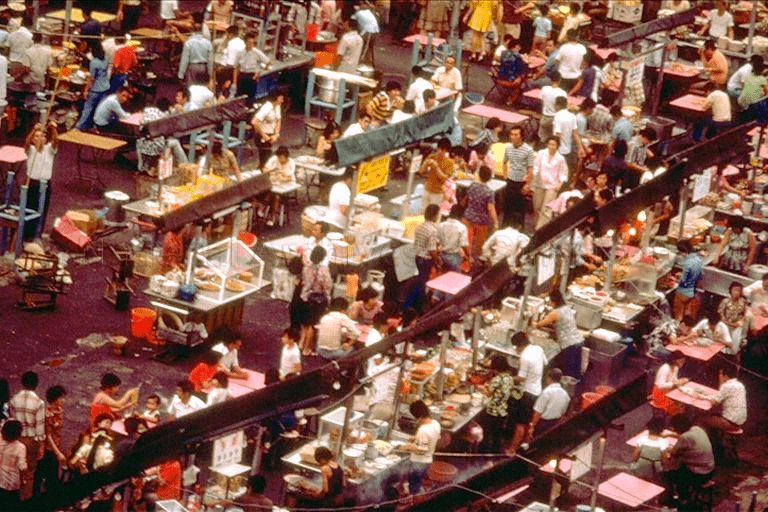 It was opened in 1966 across the road from where Centrepoint – formerly a stand-alone Cold Storage supermarket – is now located. Back in the day, you could have ended your shopping paktor with carrot cake, orh luak or satay for less than a dollar under the stars.

Most of the hawkers here were relocated to Newton Food Centre when Glutton’s Square closed in 1978, while the rest moved to the nearby Cuppage Road Food Centre.

Glutton’s Square was revived as part of the month-long Singapore Food Festival in 2004. Some of those hawkers moved to Glutton’s Bay at Esplanade Mall in 2005.

4. Telok Ayer Market – One of the first markets in Singapore

Built in 1824, a few years after the British landed in Singapore, Telok Ayer Market was one of the first markets in Singapore. 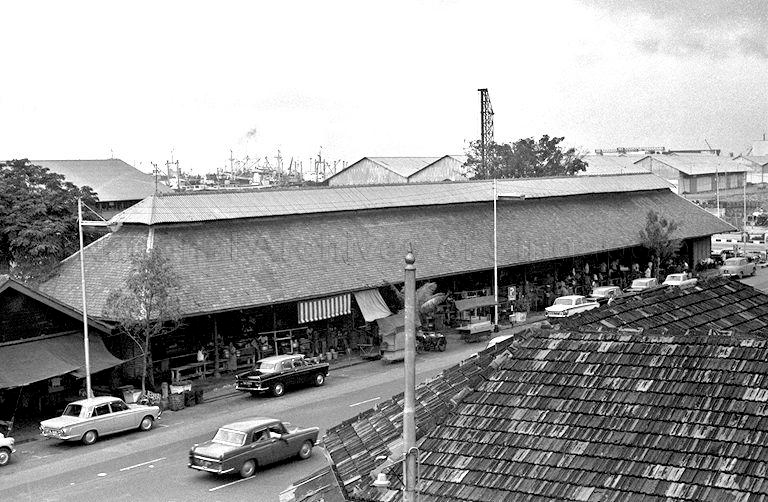 Its first iteration was a wooden 24m by 9m structure at the water’s edge. In 1838, it was rebuilt over the waters of Telok Ayer Bay – Telok Ayer literally means “bay water” – then relocated to Raffles Quay in 1894. It was gazetted as a national monument in 1973 renamed Lau Pa Sat (“old market”) in 1989. 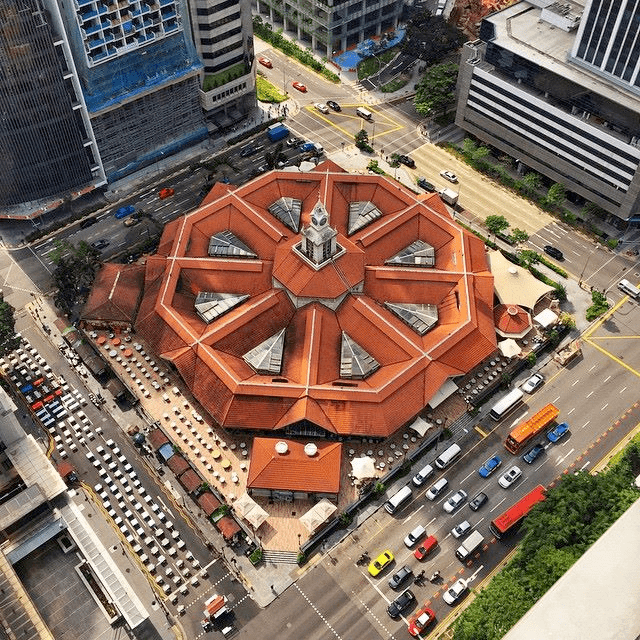 As urban development transformed the area into a business district, the market was converted into a hawker centre in 1972. It was closed in 1986 for MRT works, but the cast-iron Victorian supports were taken apart and reassembled when the building was rebuilt in the late 1980s.

Fun fact: The iconic octagonal building that Lau Pa Sat is so famous for was designed by James MacRitchie, after whom the reservoir is named. He adopted George Drumgoole Coleman’s original octagonal building design from the 1838 version. 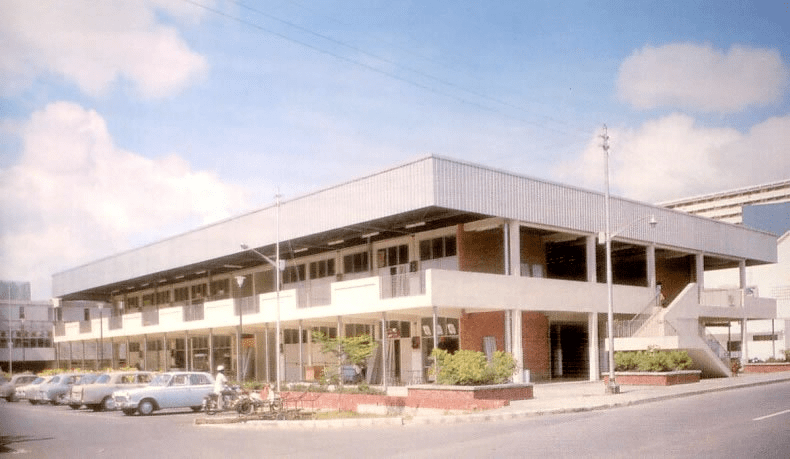 If you lived at Margaret Drive as a kid, you might recall Commonwealth Avenue Food Centre, which was built in 1969 and one of the more popular hawker centres in the West. The 2-storey food centre with 80 stalls, a stone’s throw away from Queenstown MRT, was famous for Teochew fishball noodles, chicken rice and popiah.

The market was closed in 2011 and then demolished for the redevelopment of the area. Its former location is now occupied by several blocks of HDB flats. 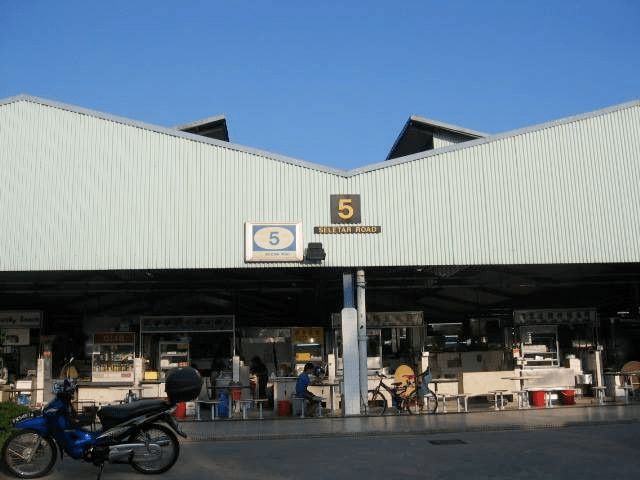 It’s now a private housing estate, but Seletar Road was where a few blocks of flats and Seletar Market and Food Centre used to stand.

The market and hawker centre was opened in 1974. In 2000, a large pre-dawn fire badly damaged the structure with its 84 stalls. The stallholders were relocated to a temporary site nearby while the market was repaired at the cost of $700,000. 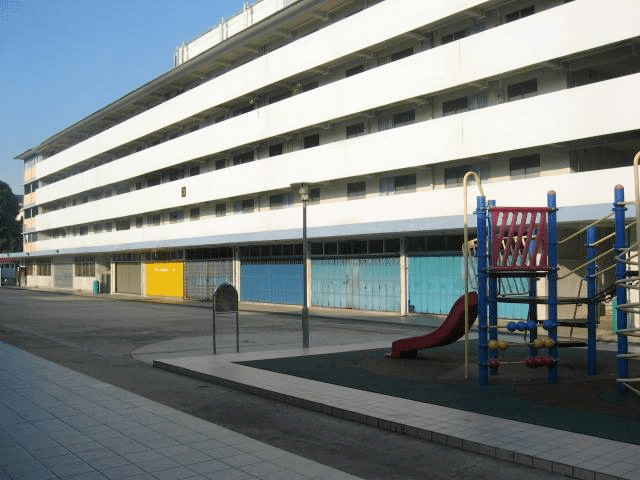 Blocks of flats at Seletar Road before they were demolished in 2005.
Image credit: irememberSG

In 2005, the blocks of flats in the area were demolished under the Selective En bloc Redevelopment Scheme (SERS), and the market soon had to be closed for lack of business. In its place is now the mini-mall and condo development Greenwich Village.

Built in 1979, Neo Tiew Market & Food Centre was located at the junction of Neo Tiew Road and Lim Chu Kang Road. If you were serving your army stint at the nearby Sungei Gedong Camp, you probably would’ve jio-ed your buddies for a good booking-out makan session there. 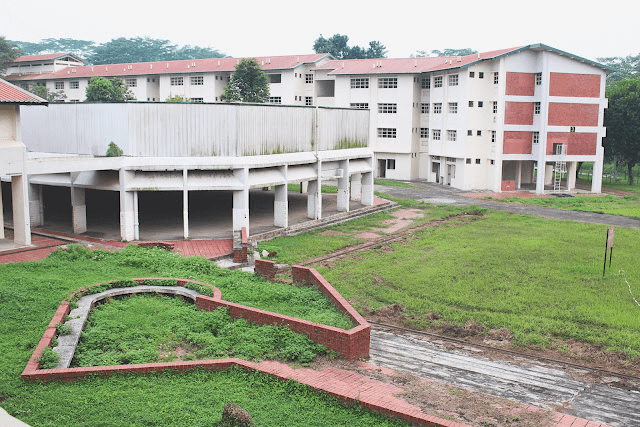 Image credit: Pok Pok and Away

It was part of the former Lim Chu Kang Rural Centre, one of only three rural centres in Singapore – the other two were at Jalan Kayu and Punggol. Rural centres were built to house Singaporeans affected by resettlement from the nearby farming areas, and were self-sufficient mini-estates. 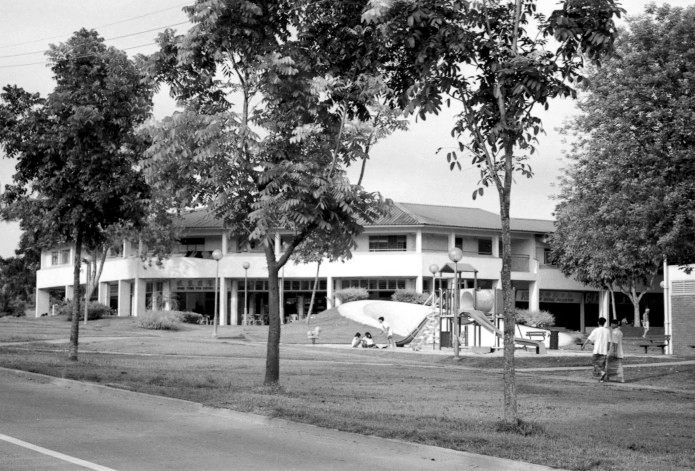 The estate was vacated in the early 2000s and residents were relocated to Jurong and Choa Chu Kang HDB estates. It was then taken over by SAF soldiers for FIBUA (Fighting in Built-Up Areas) training and is now out of bounds to the public.

The dilapidated estate has since gained a reputation for being allegedly haunted. A pontianak, who was angered by an ungrateful gambler, has been spotted roaming within and around the estate. 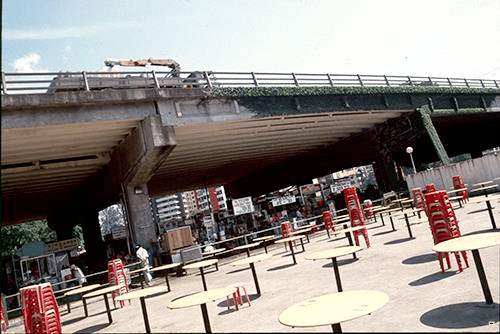 Particularly popular with taxi drivers due to its central location along Thomson Road, the Whitley Road Hawker Centre was an open-air eatery under the Thomson Flyover. 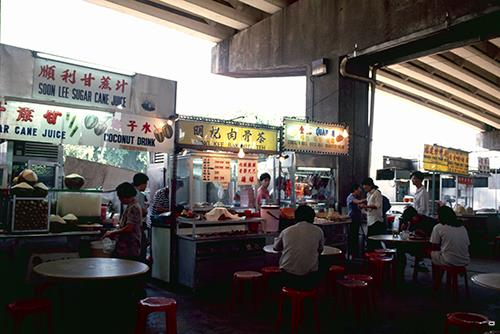 Opened sometime in the 1970s, it was famous for its prawn noodle stall with its particularly generously-sized prawns. Patrons also flocked there for the macaroni soup and pork porridge.

After it closed in the mid-1990s, the area where it stood was occupied by a futsal park, which has since been relocated due to the development of the area. 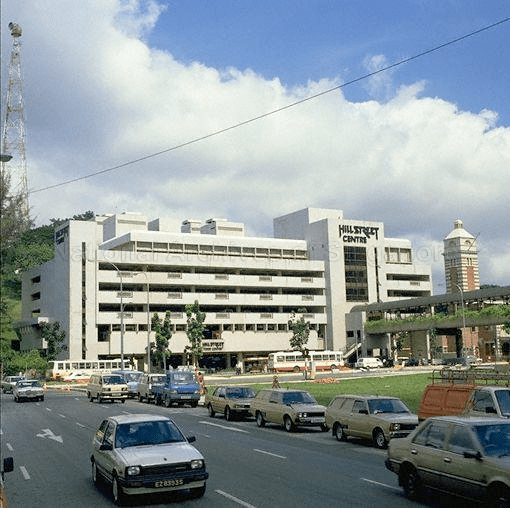 Across the road from Funan Centre used to stand Hill Street Centre, the first two floors of which were occupied by Hill Street Food Centre. Located next to the Central Fire Station, the food centre was a favourite among office workers in the Civic District.

It was opened in 1984 and housed relocated street hawkers from Wayang Street, Bugis Street and Chinatown. Hill Street Centre, along with the food centre, was demolished in 2000 for redevelopment of the area. The site is currently unoccupied. 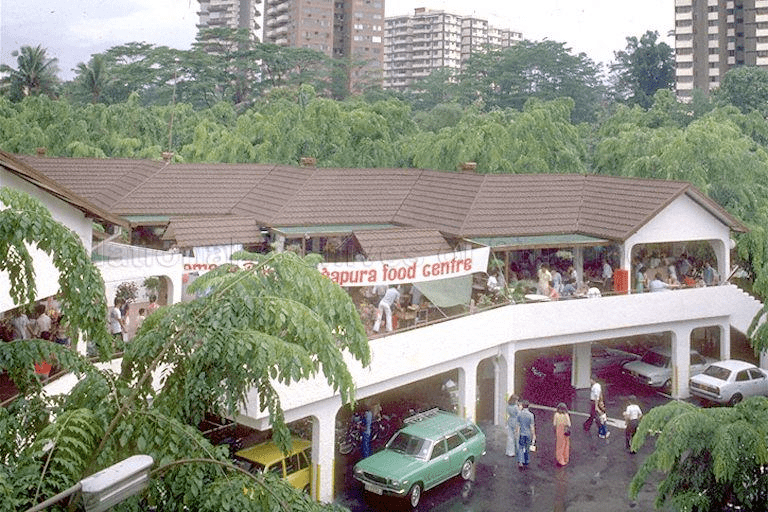 In 1978, the Singapore Tourist Promotion Board (STPB) – now Singapore Tourism Board – opened Rasa Singapura to represent the best of Singapore hawker cuisine to tourists. 700 hawkers applied for stalls there, but only 29 were eventually chosen.

The hawker centre was located in the prime tourism area at Tanglin, around where Tudor Court now stands. The Singapore Handicraft Centre, also set up by STPB, was just next door. 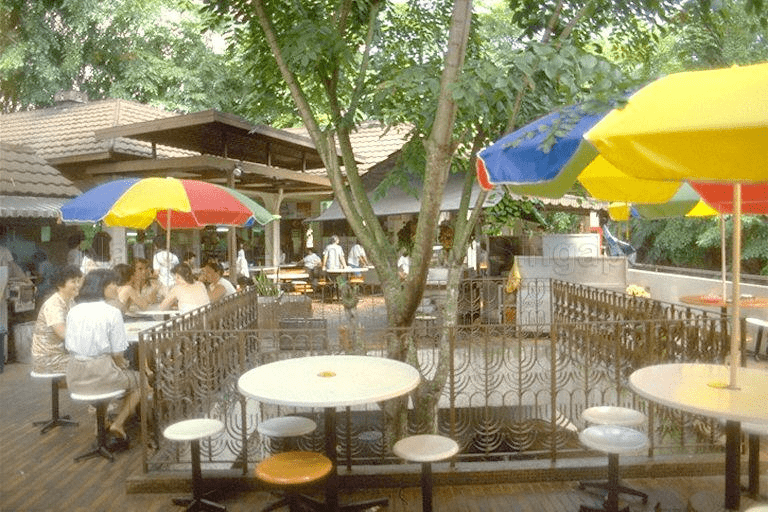 Famous for its Indian rojak and satay, it was also notorious for overcharging tourists. It was closed in 1989. 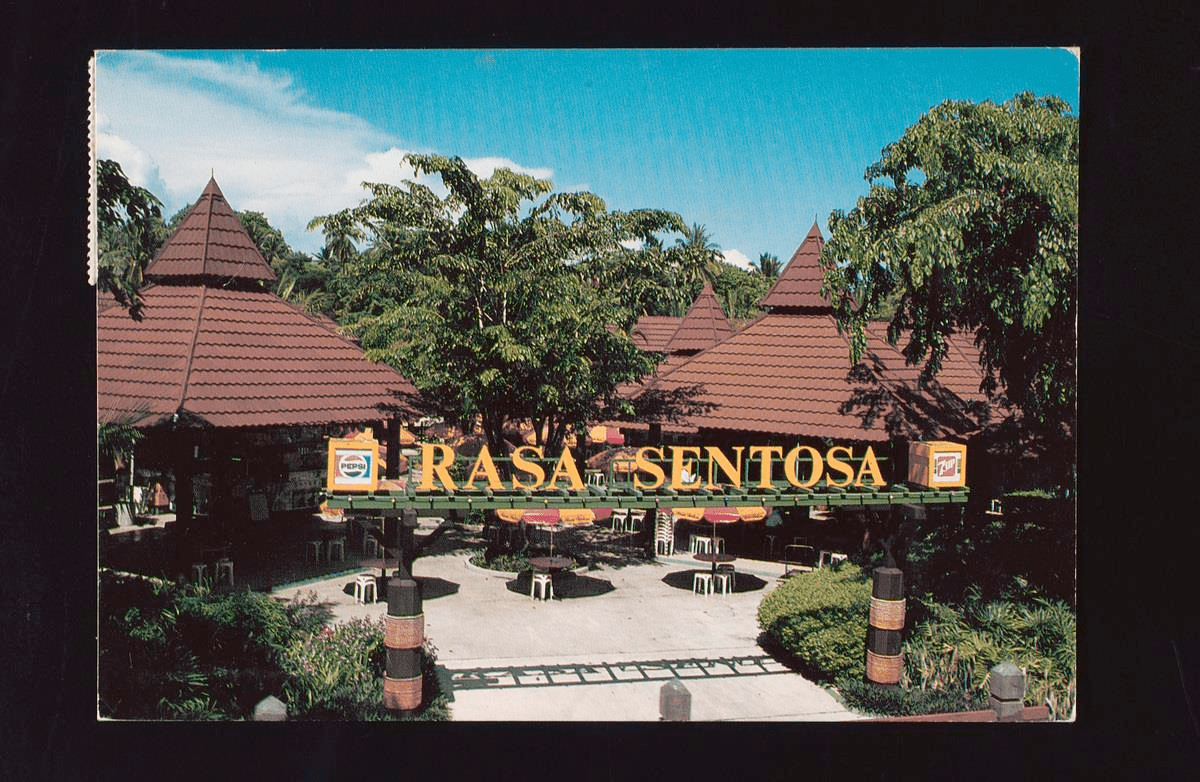 Before Rasa Sentosa was a Shangri-la hotel on the resort island, it was the name of a food centre also spearheaded by the STPB. Located next to the ferry terminal, it was an unmissable makan pitstop during a day of fun on the island or before an evening date at the Musical Fountain.

Hawkers were invited to set up stalls there before it was opened in 1982. Those who did included Albert Street Fatty Seafood, A1 Laksa and Prawn Noodles, and Hung Kee Chicken Rice. 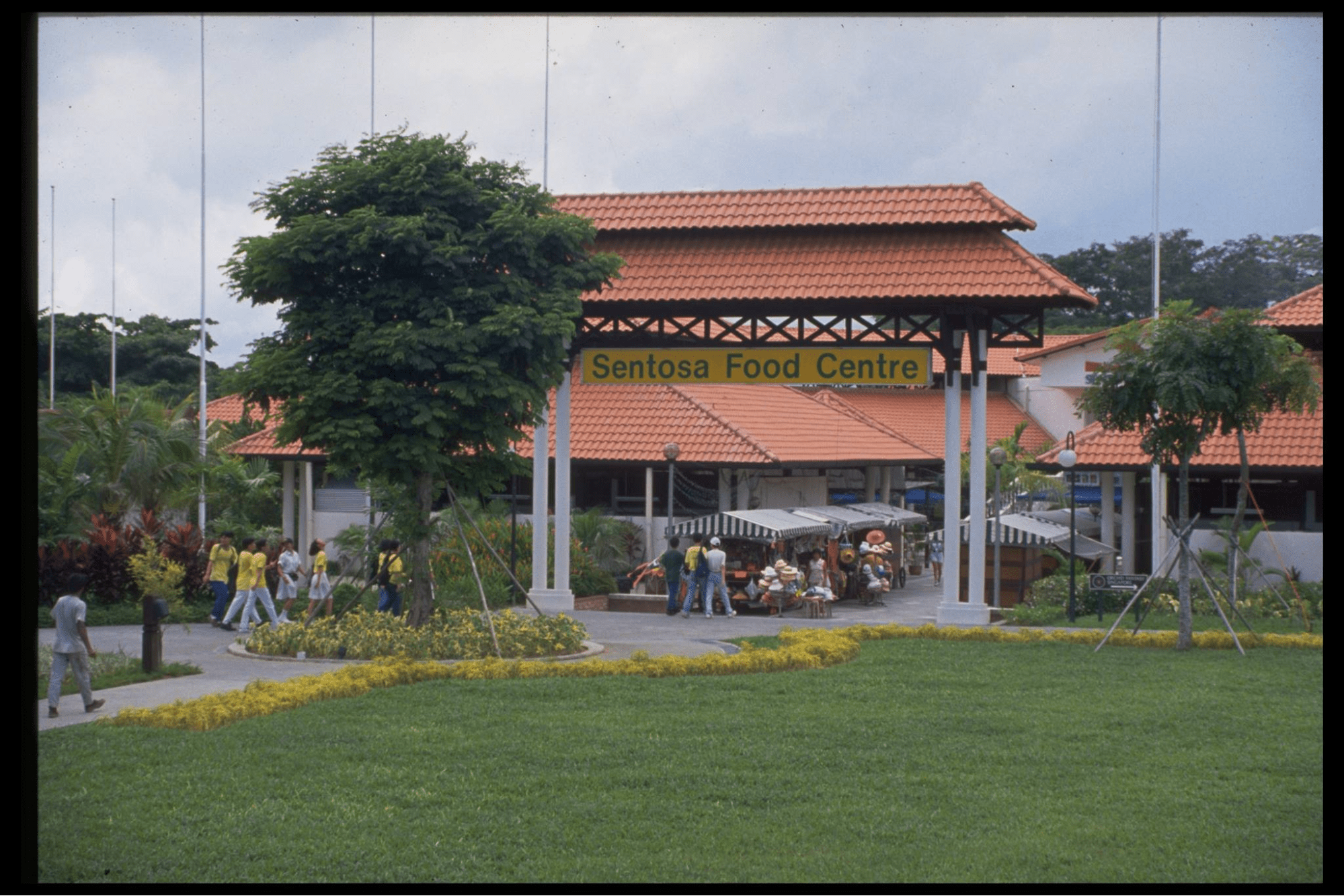 The food centre was so successful that Sentosa’s visitor numbers rose by 7 times after the food centre and Musical Fountain were opened. An extension to Rasa Sentosa was built the following year, and an open-air hawker centre – Sentosa Island Food Centre – was added next to it in 1987.

The food centres and ferry terminal were closed in the mid-2000s to make way for Resorts World Sentosa.

Those of you who are old enough might remember Longhouse Food Centre, a hawker centre along Upper Thomson Road. It was still around recently enough to have mentions on Internet sites like IG, Burpple and Foursquare, and extremely popular as a refuelling pitstop for cyclists on their long rides. 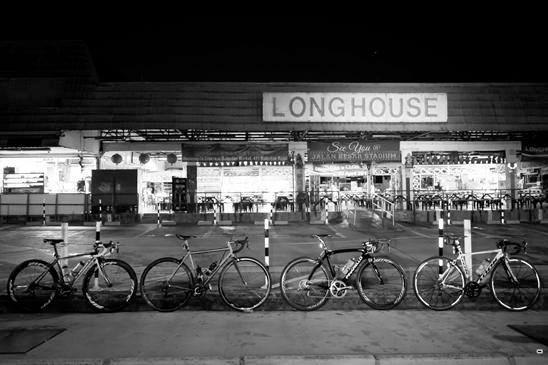 From 1980 to 1988, it was an A&W restaurant with a drive-through. It then was unoccupied for more than 10 years until Kopitiam took over the location in 2000 and renamed it Longhouse. 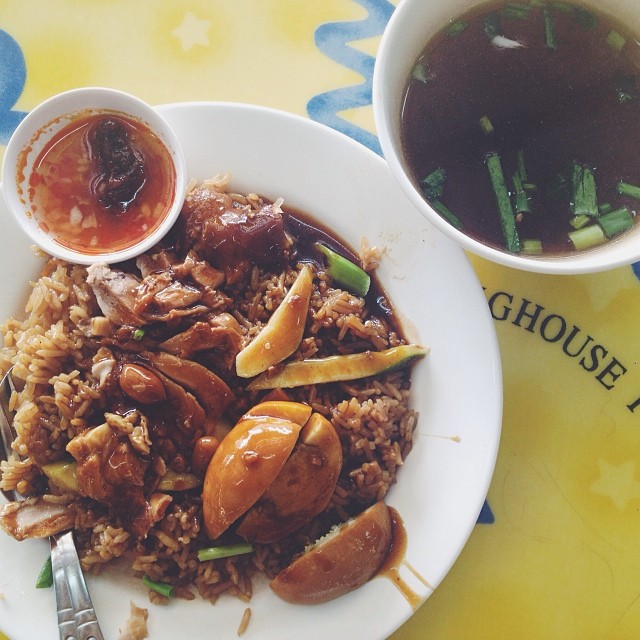 Longhouse was famous for hawker fare such as Soon Kee (Boneless) Braised Duck Rice that has since relocated to Ang Mo Kio, and Ah Hui Big Prawn Noodle, which is now at Balestier Market & Food Centre.

Singapore markets & hawker centres that are no longer around

The markets and hawker centres on this list are no longer around and live on only in photos and memories, thanks to our busy city’s constant building and redevelopment.

Hawker culture in Singapore is such an important part of our identity that it was officially added to the Unesco Representative List of the Intangible Cultural Heritage of Humanity. If that’s a bit of a mouthful, it just means that hawker centres are as integral to who we are as yoga is to India and beer is to Belgium.

So the next time you tuck into that plate of chicken rice, satay or biryani – whether at a hawker centre, coffee shop or food court – remember that you’re partaking of a vital part of Singapore’s history.

Whet your appetite by reading more about Singapore hawker food: 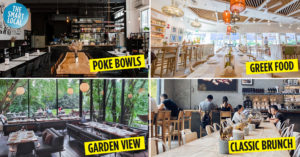 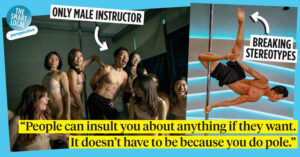