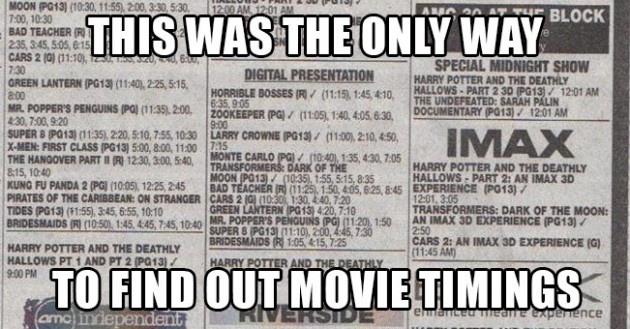 Millennials are the weird in-between kids – the ones who played with skipping ropes and Nintendo 3Ds’; who started with a Nokia 3310 and now have an iPhone 6S. We’re the folks who saw the world change rapidly, and who got caught up right in the thick of it.

There are plenty of things we used to do when we were younger that are no longer relevant now, stuff that kids born today would never experience. Here are 10 things Singapore millennials used to do everyday that are now relics of the past.

1. You could call your friend’s landline without adding a ‘6’ in front 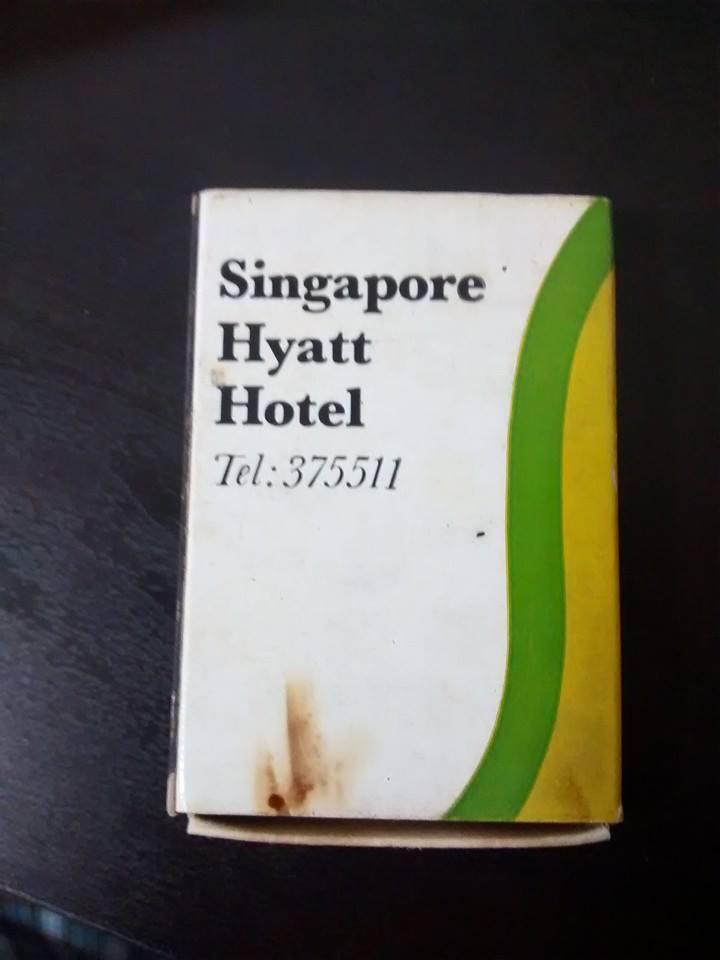 Fun fact: It was only in 2002 that the number ‘6’ was added to landline numbers. Before that, phone numbers were only 7 digits long – so you had one less digit to press whenever you called up your friend to gossip for hours, before your mom screamed at you to get off the phone.

2.You looked for movie showtimes in the newspaper 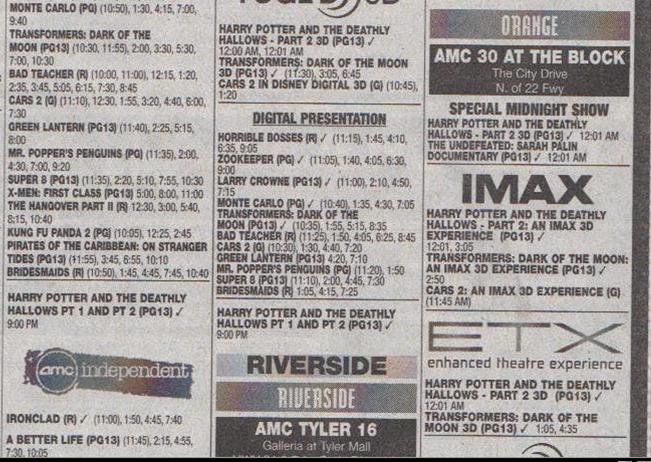 Before The Rise Of The Internet, if you wanted to watch a movie, you’d just meet at an appointed time and get tickets for whatever time slot was convenient. Slightly more savvy folks would turn to the newspapers to check the exact movie timings at various theatres to become savior of everything.

Now, you just need to go online, and not only can you see all the showtimes for a few days in advance, and buy those tickets too.

3. You still refer to the Bukit Timah area as “District 10” 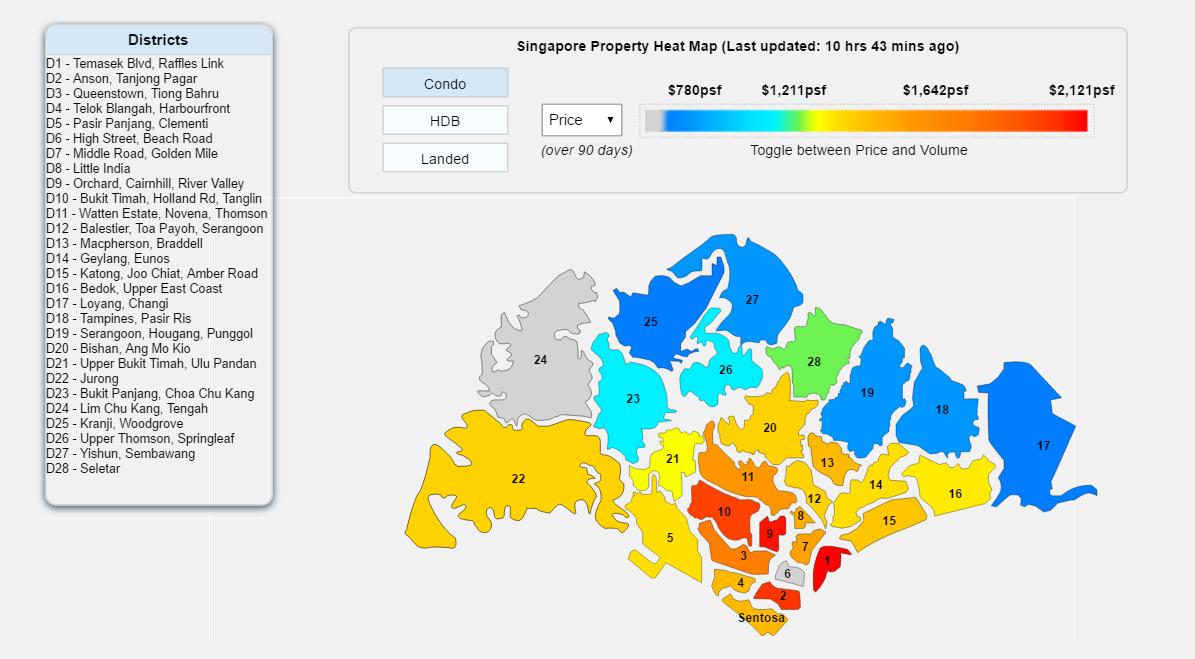 A not-so-long time ago, Singapore had 4-digit postal codes. The first two digits of your postal code indicated which district you lived in – and some, naturally, were fancier than others. Orchard Road was District 9, and the Tanglin/Bukit Timah/Holland area, which is still considered an atas part of the island, was District 10.

Nowadays, we have 6-digit postal codes that have done away with the old district system – but we still gasp in surprise and say “Wah, you live in District 10 ah?”

4. You relied on Teletext for airport arrival times 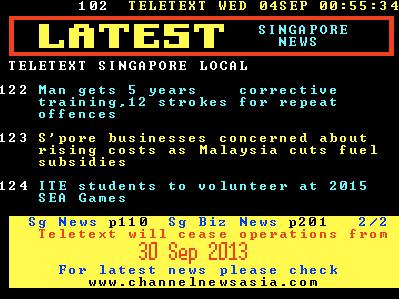 Teletext used to be the only way you could find out flight details, and I remember my dad using it to check what time my mom’s flight would land so that he could pick her up. My grandpa used it to check if he’d won 4D, and you could also look at other things, like the news and the stock exchange.

Teletext closed down for good in 2013, a victim of modern technology.

5. You stuck your head out the window of non air-con buses 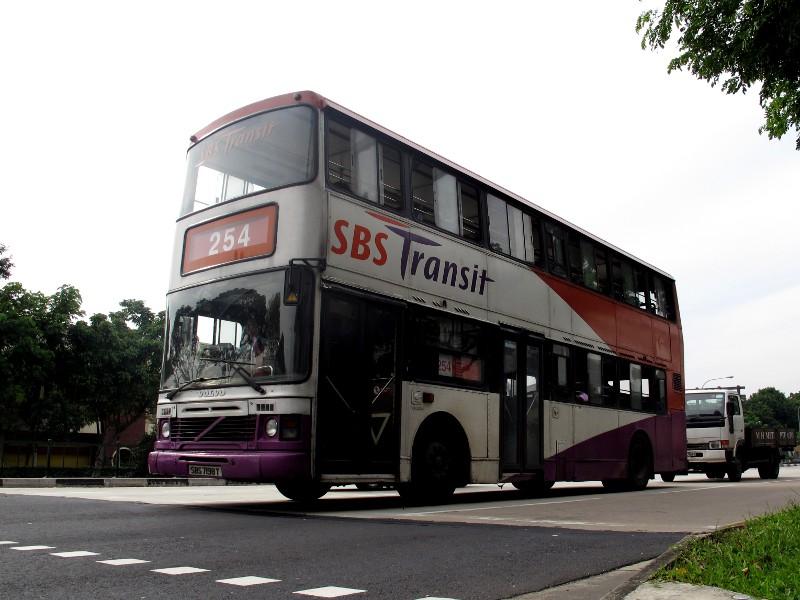 Non air-conditioned buses were the bane of our peak hour travelling existence, but it did have its perks. Sitting by the window and having the wind in your hair was awesome, until your bus happened to drive past a dump truck and you were hit with the smell of eau de trash.

You also had to scramble to close the windows if it started raining mid-journey, and probably tried to stick your head out through the bars of the window at some point, before your mom screamed at you to get back in. Fun times, man.

6. You checked the papers to see what’s on TV 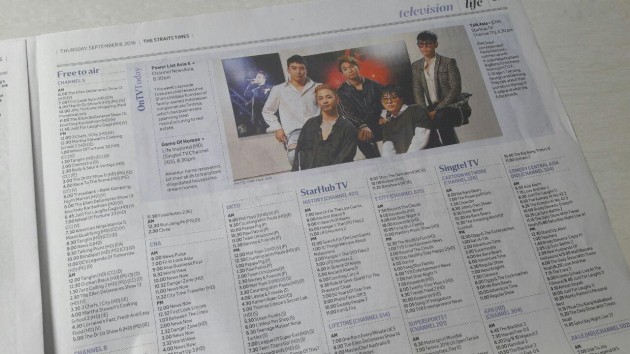 Some of us planned our entire schedule around this particular page of the newspaper, which lovingly details what show was airing, when, and on which channel. I always rushed home from tuition to catch my 5.30pm cartoons on Kids Central, and my Saturday plans were often decided by what was screening on Channel 5 that night.

I still refer to the television page in Life! If I want to check what’s on TV, even though I could easily find out by pressing the Guide button on my Starhub remote. No one even really watches TV anymore, though.

7. You always kept an emergency 10 cent coin “just in case” 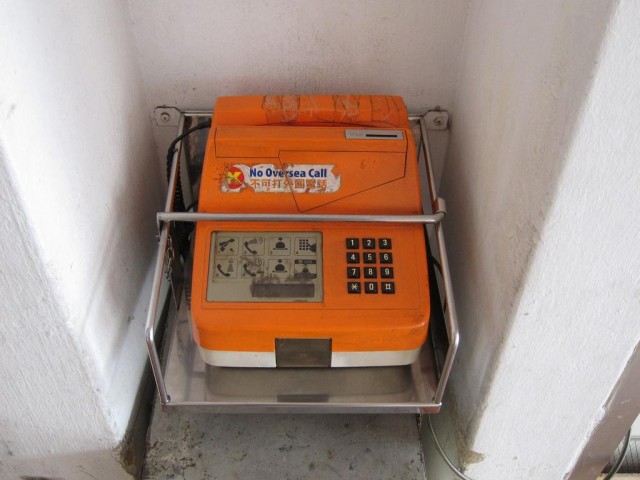 Before you had a cellphone, the payphone was your friend. Sometimes, you even had to queue to make a call!

10 cents was enough for you to call home and ask if you could stay out to play longer, and when you were older, you had payphone cards with stored value that you could use to make calls. These cards often came in a variety of different designs, and collecting phone cards was a hobby you could declare on autograph books – another tradition from times past that’s no longer relevant today.

8. You had autograph books 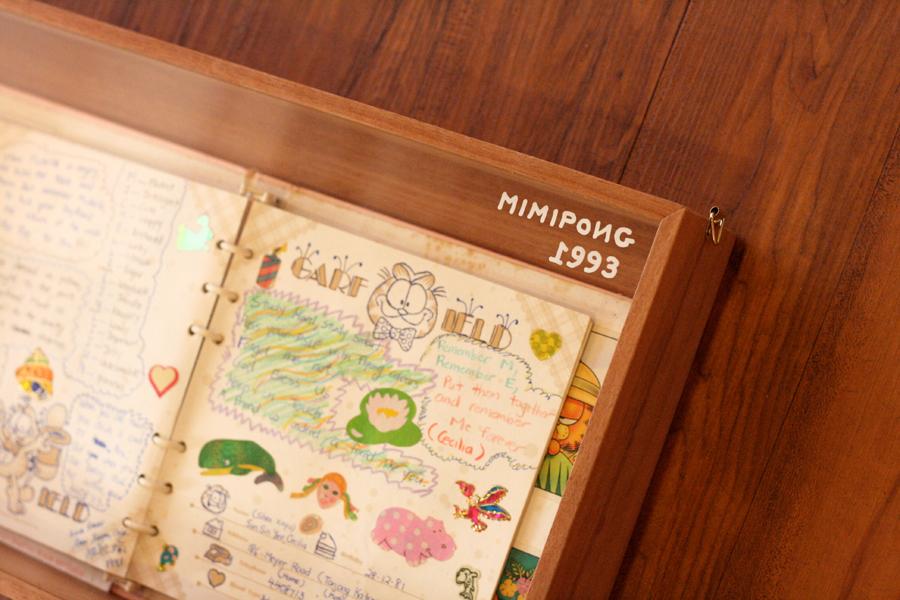 Autograph books were the coolest thing when I was in primary school – we’d fill in our birthdays, hobbies, favourite shows and food in coloured markers and glitter pens, and leave our contact details, imploring our friends to keep in touch.

Now, with social media, you don’t need autograph books anymore. Facebook has let me reconnect with old friends I haven’t seen since we were 12, and Instagram tells me all about what my friends are up to right now, whether they’re studying in Australia or if they just cut their hair.

9. You could eat pig’s blood at yong tau foo stalls 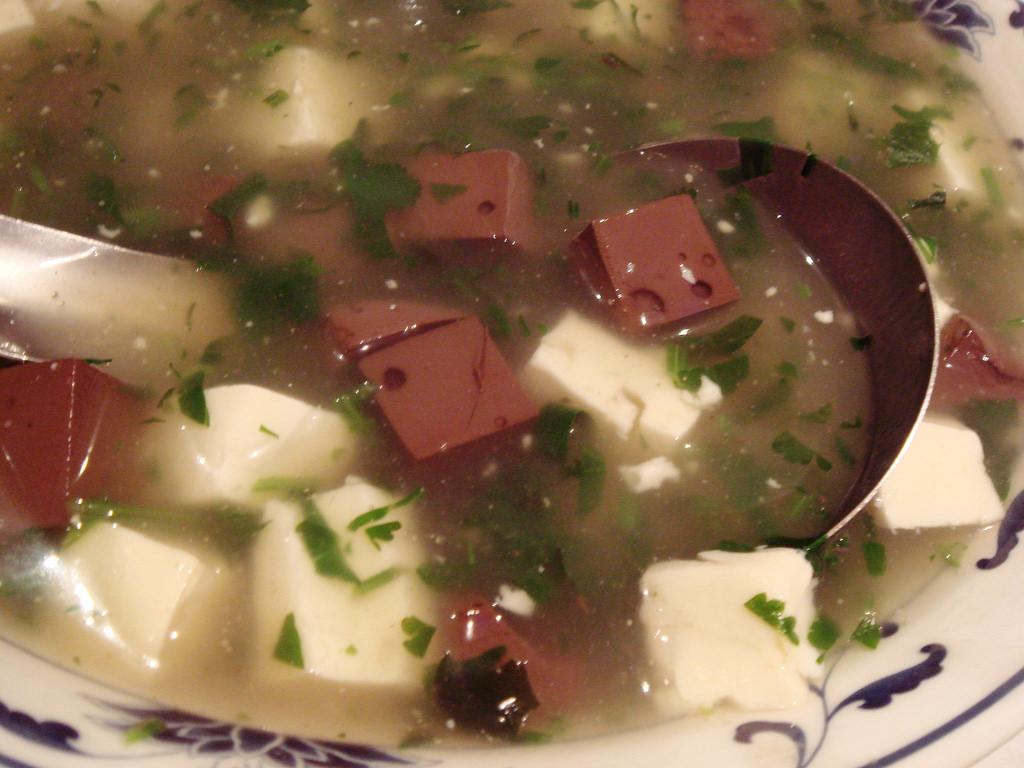 Pig’s blood and tofu soup – something you won’t ever see in Singapore. Source

For folks who love pig intestines and the like, pig’s blood curd was a fond staple at the yong tau foo stall. However, in 1998, a deadly virus known as the Japanese Encephalitis showed up and ruined it all. It also brought about a new slew of regulations around the sale of pork, which was reassuring in terms of food safety, but sad if you were a fan of pig’s blood.

Pig’s blood has since been banned in Singapore, and if you want to eat it, you’ll need to cross some borders to do so.

10. You held up film negatives to squint at the pictures 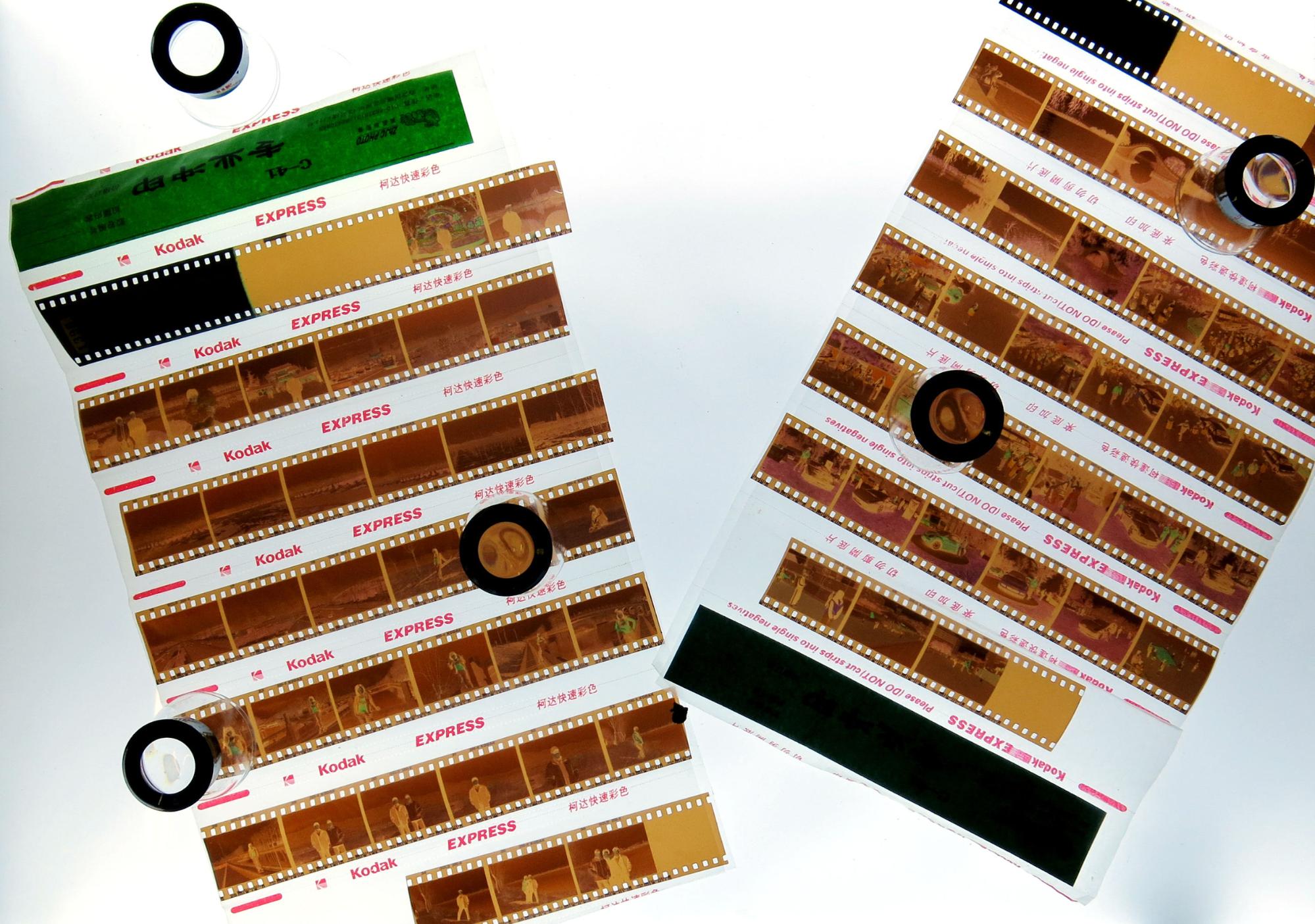 Back when film cameras were mainstream and not the domain of hipsters, we had little black canisters of film, and envelopes full of bleached-brown negatives. I used to peer at the negatives and try to make out the images from them, every time my family developed photos. We didn’t get a digital camera until 2005, and back then, it was still considered a luxury item.

Fast forward ten years, and who even prints photos anymore? Everything has gone digital, and we’ve foregone photo albums for Facebook albums and IG feeds. Kids today will never know what a film negative is, and how many memories they held.

#throwback to days gone by

It’s pretty fascinating to see how much has changed since we were younger, and how things that were once commonplace are now on their way to being relegated to a museum. It was only in 2013 that non air-conditioned buses were fully phased out, and yet it seems like something done decades ago.

Who knows, in time to come, iPads and Netflix might just become something of the past, and we’ll have something new to change our worlds.

I can read minds. You’ll also love these articles.