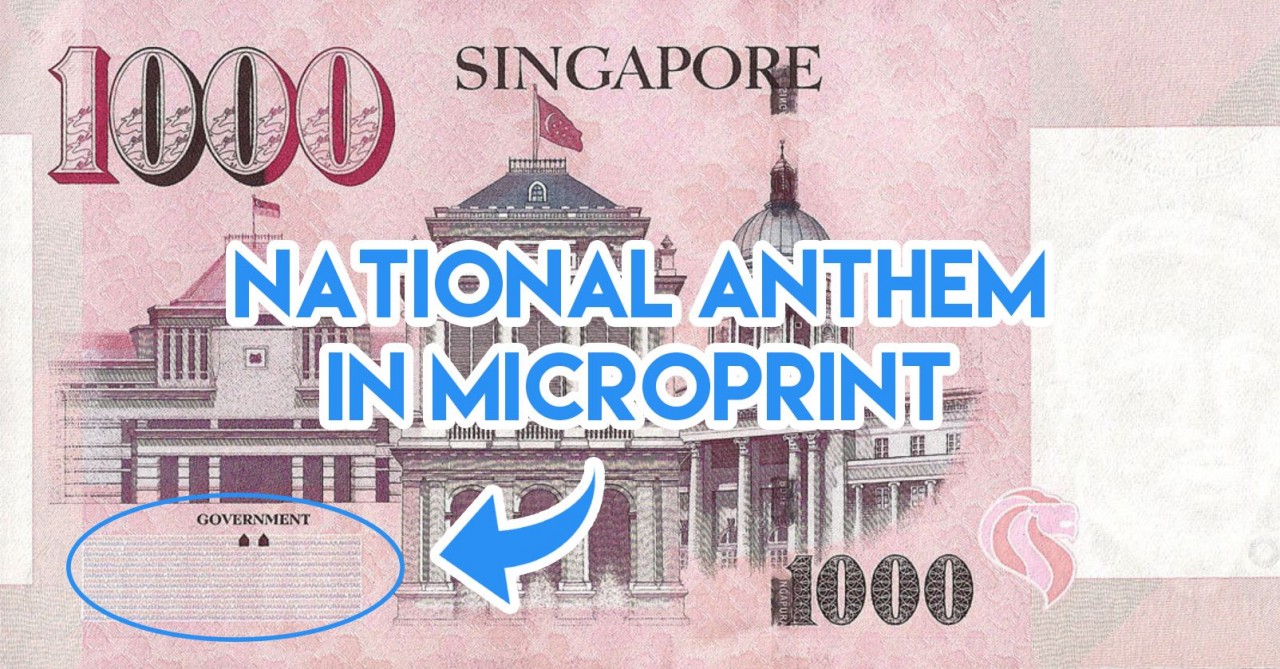 It’s no secret that we Singaporeans are cheapo financially-savvy folk. But while we handle money almost on a daily basis, there are still a ton of things we haven’t noticed about our own cash.

Whether it’s paper or polymer, coins or notes, here are 9 things about our Singapore money that you probably didn’t know.

1. The entire national anthem is printed on the back of the $1000 note in microprint 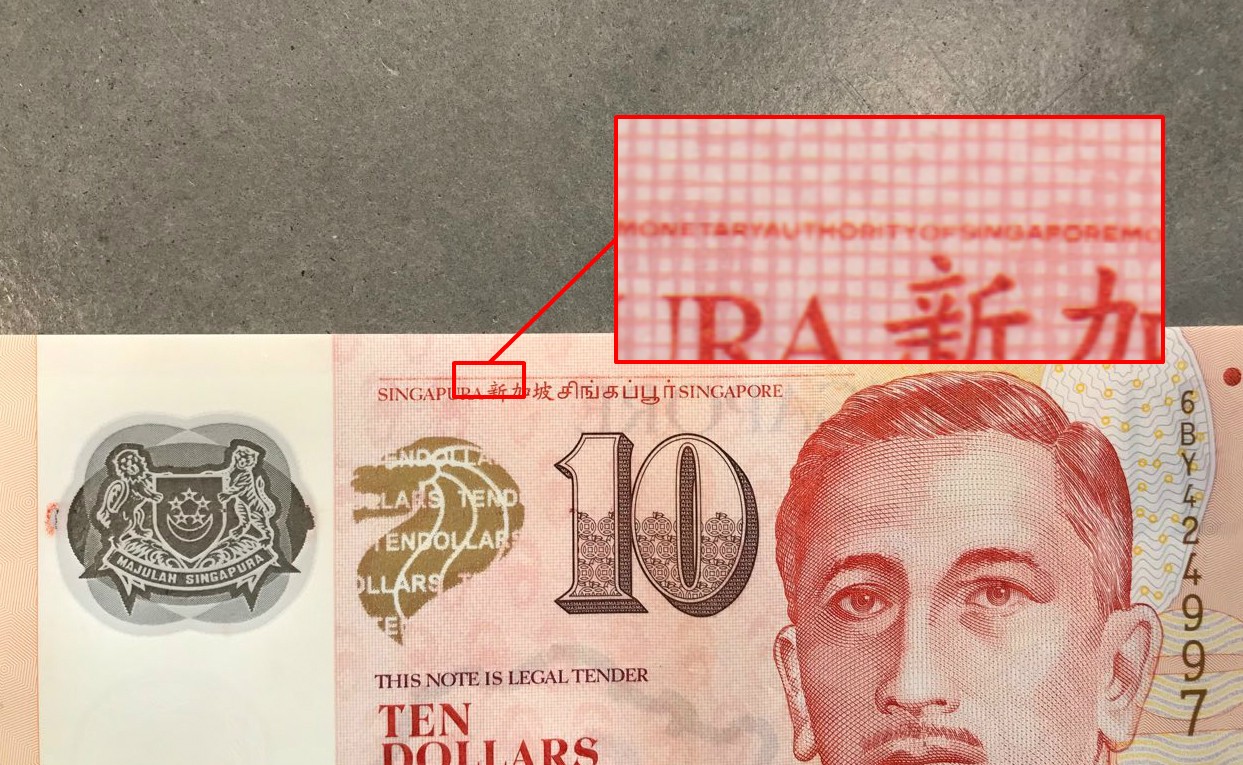 In case you didn’t notice, our notes are actually filled with microtext. Take a closer look at any of the notes in your wallet, and you’ll realize that the ‘line’ at the top actually spells ‘Monetary Authority of Singapore’ over and over.

But the $1000 takes the microtext game to the next level by having the entirety of the national anthem on its back.

It actually makes sense, if you think about it. Get your hands on one of these, and you’ll definitely feel like singing Majulah Singapura.

2. You can legally spend the Singapore dollar in Brunei

If you google the exchange rate between Singapore and Brunei, you’ll realise that it’s at perfect equilibrium: 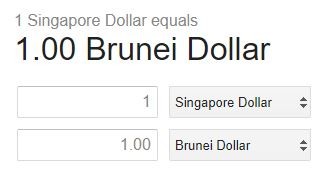 And that’s no coincidence. Thanks to an agreement between Singapore, Brunei and Malaysia, the currencies of Singapore and Brunei can be used interchangeably “at par and without charge”. Meaning, you can fork over 3 Singapore dollars for a $3 plate of chicken rice in Brunei, no questions asked.

Our neighbouring country used to be part of the agreement, but pangseh-ed back in 1973, which explains your weekend day trips to Johor Bahru to take advantage of the 3:1 exchange rate.

You might have seen these uniquely Singaporean accessories on the internet: Regardless of how quirky or cool they might look, the only place you’ll be rocking these is on the wrong side of the law. Under Singapore’s Currency Act, it is illegal to “mutilate, destroy or deface” any form of Singapore currency, and offenders can be fined up to $2000.

4. We no longer mint 1-cent coins, but they are still in use

Yup, we’re talking about those copper-hued coins that Singaporeans used to avoid like the plague. Their tiny denomination made them more of a hassle than anything, so in 2002, the Board of Commissioners of Currency, Singapore (BCCS) stopped minting them.

Nevertheless, these coins remain legal tender, so you can still spend them.

Orange is the new blue. Or at least, it is when it comes to our $50 notes. In July last year, 2 million $50 notes were released in striking orange designs, to commemorate the 50th Anniversary of the Currency Interchangeability Agreement between Singapore and Brunei.

These notes are legal tender, and our banks are known to carry them, so you could try your luck there. If smaller denominations are more your thing, an orange $20 note was also released back in 2007.

6. There’s actually a limit to the number of coins you can use in a transaction

Currently, businesses are obliged to accept up to $2 per denomination for coins worth less than 50 cents, and up to $10 using 50 cent coins. $1 coins, however, have no spending limit – which resulted in this mobile phone shop refunding a customer $1000 in coins.

To prevent similar acts of mischief, the Monetary Authority of Singapore (MAS) proposed a new limit last year. If this comes into place, you can only spend 10 coins per denomination in every transaction, unless both parties agree to a different limit beforehand.

Those who pay people back in coins just to be difficult for fun, beware.

7. You can exchange damaged notes for new ones at the bank

All the money saving hacks in the world won’t save you if you end up accidentally tearing one of your notes. A $50 note with a missing corner is worth about as much as a used piece of tissue paper.

Thankfully, you can exchange your note for a new one at any of our banks. But you’ll still need to have a note that’s at least two-thirds present for a full refund. You’ll also have to produce evidence that you didn’t intentionally mutilate a healthy banknote, so it’s better to avoid damaging one in the first place.

Good thing our new polymer notes are made of tougher stuff.

8. We have the second most valuable note in the world

As it turns out, the $1,000 we mentioned earlier is not the biggest denomination of money here in Singapore. That title belongs to this golden-hued note here:

That’s right, we actually have a ten thousand dollar note. It’s currently the second most valuable note in the world, right after the American $10,000 note, which was discontinued in 1969.

Unfortunately, while they remain legal tender, the MAS stopped printing these banknotes back in 2014 to reduce the risk of them being used in money laundering. That, and to prevent people from using them to pay for a $1 cup of coffee and making the poor kopi uncle scramble for $9,999 in change.

If you stand at a certain spot of our Botanic Gardens and take out $5, you’ll realise that the tree on the note looks suspiciously familiar. 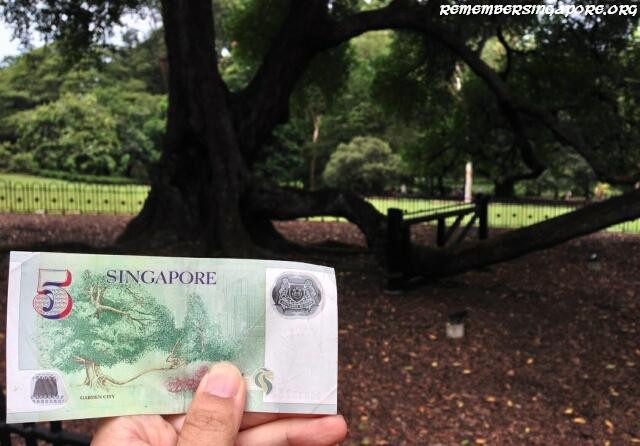 That’s because this particular Tembusu tree is the actual one illustrated in the note, and it’s over 150 years old, even older than Botanic Gardens itself. Sadly, the area has been fenced off to protect this ancient tree, but you can still see it for yourself near the Tanglin entrance of Botanic Gardens.

Money might be something that we handle often, but these are the things that you wouldn’t otherwise notice unless you pay close attention. Now that we’ve pointed them out, what you do with this new wealth of information is up to you!

Check out our list of things that nearly happened in Singapore’s history for more.

10 Popular Retirement Cities Among Singaporeans & Their Restrictions As Of 2018
8 Alternative Jobs In Singapore Only Science, Tech, Engineering & Math Grads Get To Experience