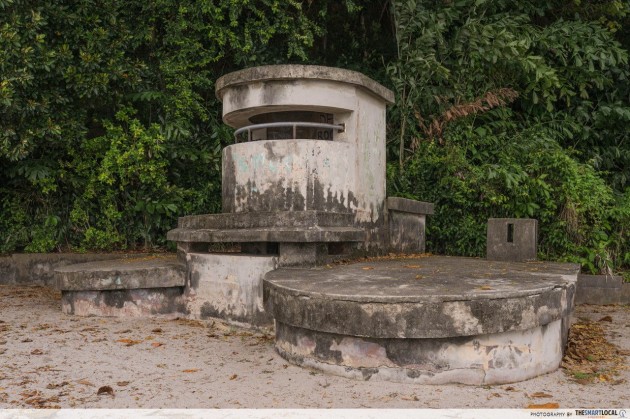 The last time we embarked on an adventure with My Community, we learned about Queenstown residents’ interactions with their living spaces. My Community is a registered charity in Singapore that does atypical charity work, conducting urban explorations into abandoned ruins and organising carnivals to bond Singaporeans together.

My Community also conducts free weekly tours, and we joined them for their Labrador and Alexandra Heritage Tour, exploring iconic heritage sites and delving into Queenstown’s military past. Here are 10 highlights of this walking tour that’ll bring the tales in your history textbooks to life.

1. It starts off at the lush green haven that is Labrador Nature Reserve 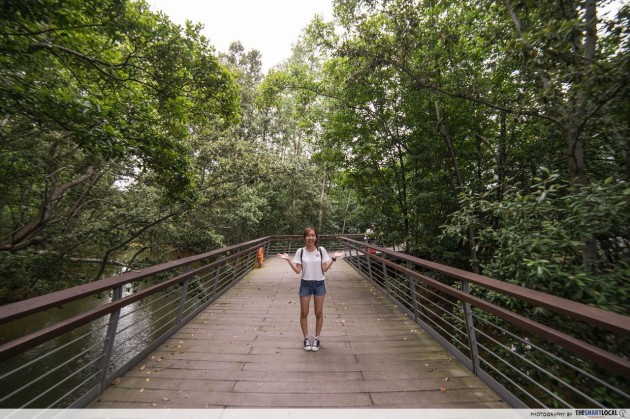 Home to 3 kinds of natural habitats including mangroves, rocky shore and mudflats, Labrador Nature Reserve is a wildlife haven, with 60 bird species, 19 fish species and 14 true mangrove plant species. There’s a high chance that you’ll spot monitor lizards and squirrels along the way like we did, as well as mudskippers lurking in brackish waters. 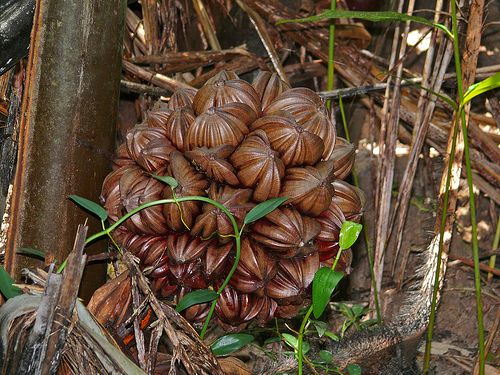 Our guide also pointed out 2 species of mangroves to us: Bakau Pasir and Nipah Palm. The seeds of the Nipah Palm fruit is known to us as attap-chee, which is found in one of Singapore’s most beloved national desserts: ice kacang. 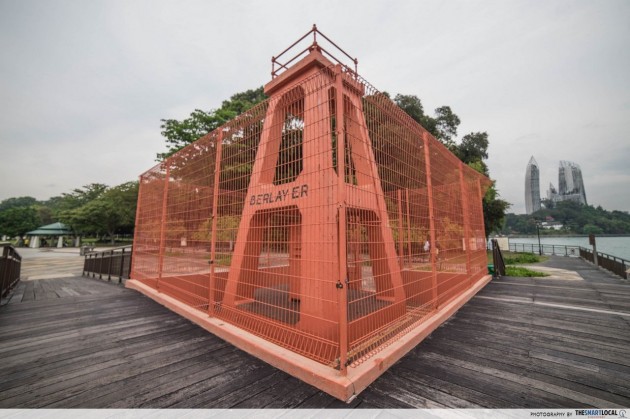 Given our history as a port city, it’s surprising how rare lighthouses are in Singapore now. One of Singapore’s last remaining lighthouses, the 7-meter tall Berlayer Point Lighthouse, can be found a few minutes away from Labrador Park MRT at Berlayer Creek. Look across the sea and you’ll spot its green cousin, a conical beacon in Tanjong Rimau. 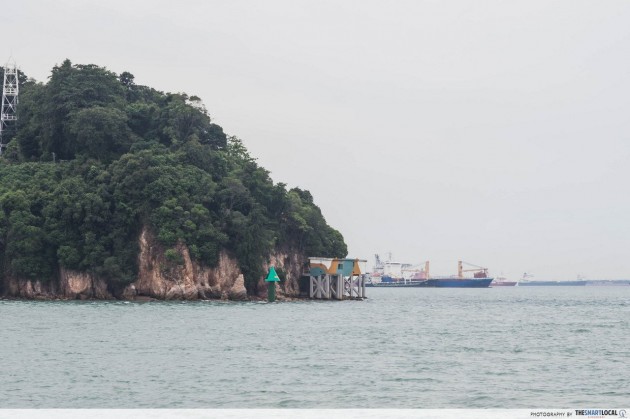 Back in the days before Google Maps, sailors could refer to both beacons as the shortest distance between Sentosa and mainland Singapore.

Singapore Tourism Board and NParks nearly demolished the red beacon in 2005, intending to replace it with a replica of Long Ya Men (Dragon’s Teeth Gate), a symbol of how the entrance to Singapore was once described as fraught with “rocks as sharp as dragon’s teeth”. Fortunately, good sense prevailed and a crucial part of Singapore’s maritime history still sits in its original spot today.

3. This replica of the original Long Ya Men which was blown up in 1848 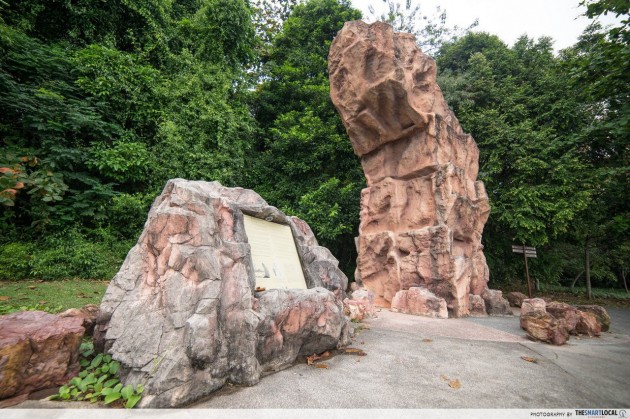 A few steps away is the replica of Long Ya Men (Dragon’s Teeth Gate). The original Long Ya Men, a granite outcrop sitting at the edge of Labrador Park and Tanjong Rimau, was so visually impactful with its jagged edges welcoming sailors to Singapore that they were noted by distinguished Chinese explorers Cheng Ho and Wang Dayuan. Unfortunately, they were blown up by the British in August 1848 to accommodate larger vessels.

Also known as Batu Berlayer (Malay for sail rock), Long Ya Men served as a gateway to the western entrance of Keppel Harbour. Unfortunately although the original Long Ya Men was a visual spectacle that will live on in history books, this installation which was built in 2005 to commemorate the 600th anniversary of Wang Dayuan’s first voyage from China, is now all we can remember it by.

This machine gun bunker was erected on the beach at Keppel Harbour in the 1930s, to protect the 12-pounder gun ensconced on the hill right behind. 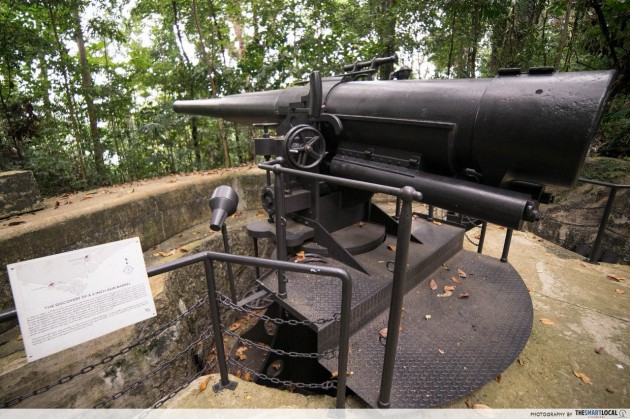 Prior to World War II, two 6-inch guns were installed at Fort Pasir Panjang, in response to a potential attack by the Japanese battleships. 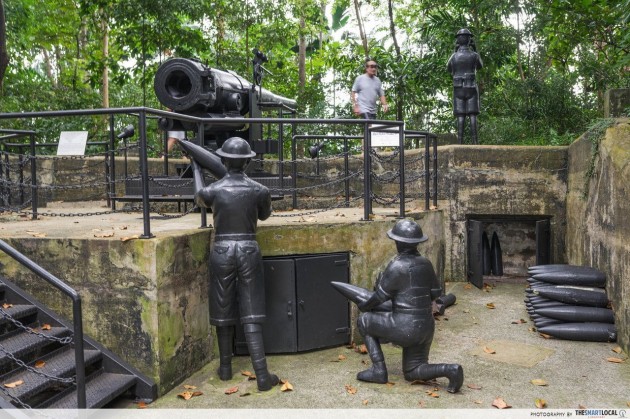 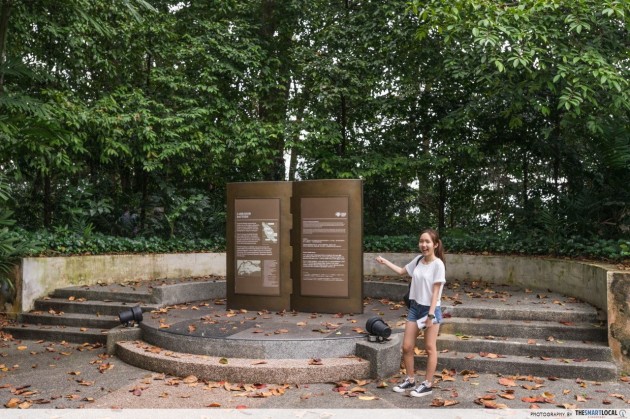 These guns were manned by soldiers of from different ethnic groups, under the supervision of the British. Malay soldiers operated the searchlights, while Indian soldiers guarded the guns. 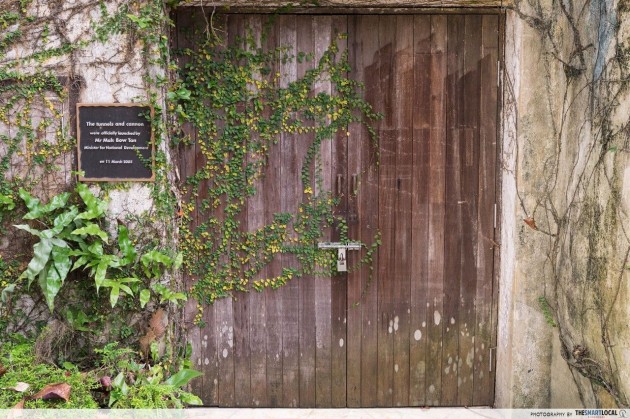 Entrance to the casemate, which supported a 9.2-inch gun.

You can also find rooms here that were built in 1886 which served as ammunition storage, sometimes doubling up as a hideout for British troops stationed in Labrador Park. Though we were slightly disappointed that the casemate (a fortified gun emplacement) is now out of bounds, we were captivated by our guide’s story of his adventure into the tunnel about a decade ago. 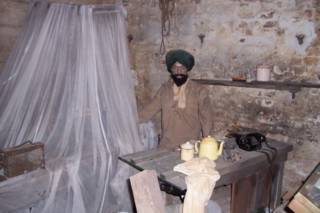 Back then, there were exhibits of the soldiers’ living quarters, and he could even see Indonesia from the windows in the tunnel! Unfortunately the tunnels have since been closed for safety reasons.

5. Check out where the British soldiers bunked before WW2 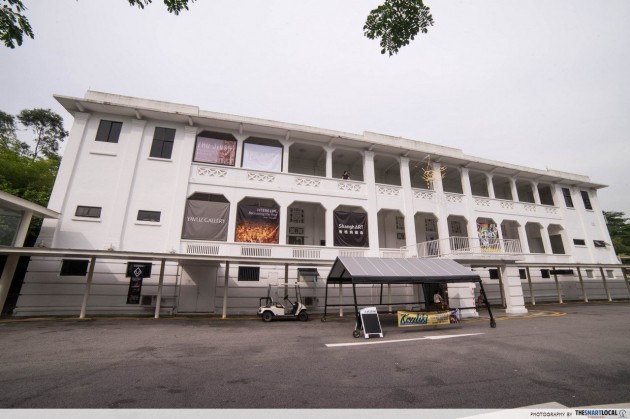 We all know Gillman Barracks for its hipster art galleries and exhibitions, but what lies underneath is the barrack’s role as a holding place for British troops before WW2. And though they were serving their nation too, their living conditions were waaay more luxurious than the bunks in Tekong. 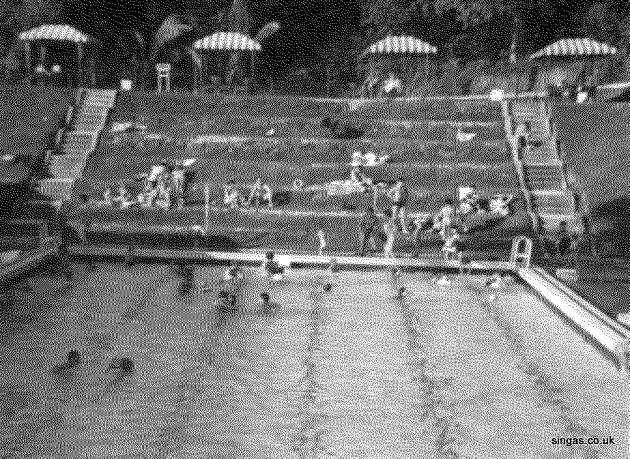 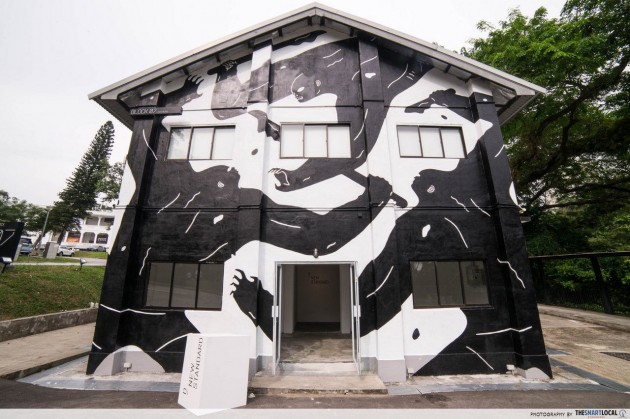 Regal Cinema used to be at Block 7.

After the British army withdrew from Singapore in 1971, Gillman Barracks was handed over to the Singapore government for a token sum of only 1 pound. Yes, only a pound as it’s the lowest amount possible required for the procedure to sign the handover of a British property.

Gillman Barracks conducts FREE heritage tours on a weekly basis, so sign up if you wanna dig deeper into its history. 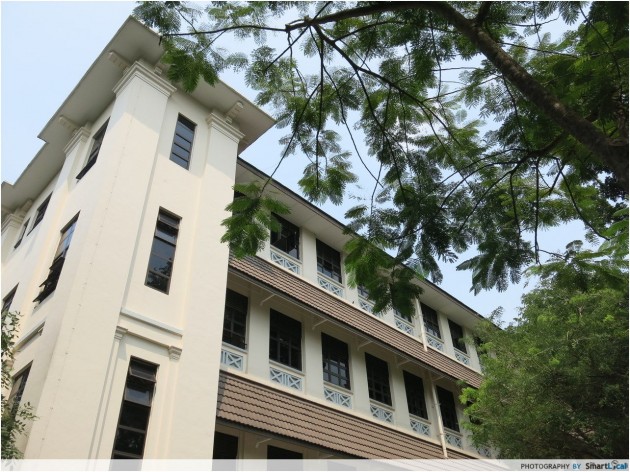 The only hospital in Singapore gazetted for conservation, Alexandra Hospital was built in 1938 to provide medical facilities for the British military. We don’t like to bring up tragic events, but there’s a sad past to this hospital that can’t be ignored.

A day before the British army surrendered in 1942, the Japanese bombarded the hospital, killing over 200 hospital staff and patients in a horrifyingly short span of 30 minutes. Following the war, Alexandra Hospital was handed over to the Singapore Government for a nominee fee of 1 pound in 1971, and later converted into a civilian hospital.

7. A lone cottage that housed the staff of KTM Railway 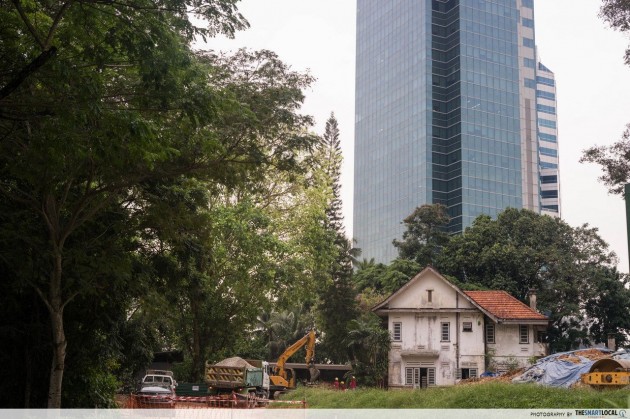 Walking along Alexandra Arch Pedestrian bridge, we looked down and spotted a 1930s country cottage that was undergoing construction. Said to be the family home of the former railway superintendent of the Malayan Railway, there’s a mysterious aura to 394 Alexandra Road that makes us want to dig deeper.

Interestingly enough, over the years, the residential address of this home has been registered with various business, but the shadiest of them all was Sim’s Recuperation Service, a private nursing home ran by a lady named Mdm Ho Ah Moey between 1984 to 1985. The “nursing home” was forced to close down after they were caught for confining foreign domestic workers in doorless cubicles and coercing them to work as nurses. 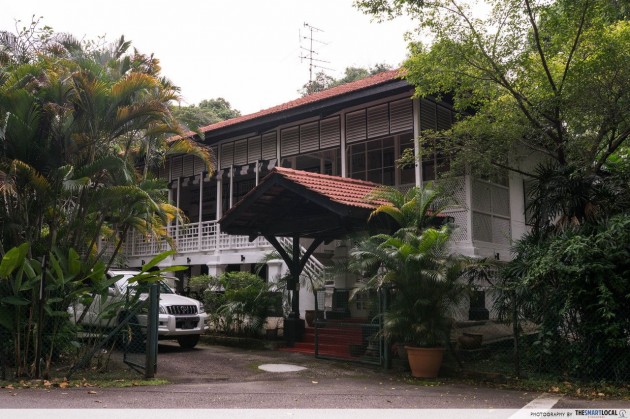 Alexandra Park is a pretty picture of rolling hills that bend and curve according to natural landscape, and where monochromatic colonial bungalows are spaced far apart. By the looks of it, you’d have guessed that Alexandra Barracks is way more atas than Gillman Barracks – the former accommodated the highest ranked British officials.

Named after Princess Alexandra, wife of then-Prince Wales, Alexandra Barrack embodies a strong British presence, with surrounding road names like Canterbury Road and Berkshire Road derived from the land of tea and scones.

We were so thrilled when our guides told us that 3 generous owners were willing to let us step into their front yards, so we had a closer look at the architecture and design of their homes. 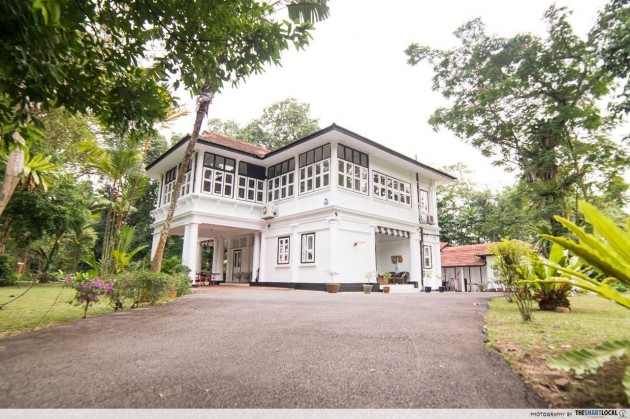 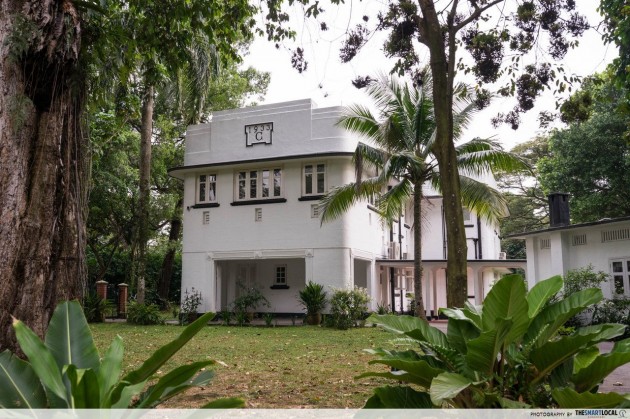 Designed in the Art-Deco architectural style, this mansion was constructed in 1933 by the Public Works Department, which was the equivalent of today’s HDB and LTA. You might notice the strong resemblance to the SIT flats in Tiong Bahru in design, with distinct curved edges – a telltale sign that these houses were all built in the 1930s. 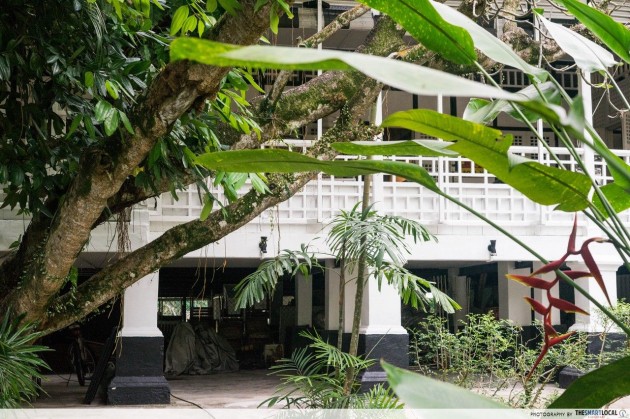 The latticework of this Plantation-style bungalow facilitates airflow, but there’s more to it. In the olden days, the former homeowners could spot tigers from within the house, and quickly hide because the tigers couldn’t see people from the outside, giving homeowners protection and privacy. 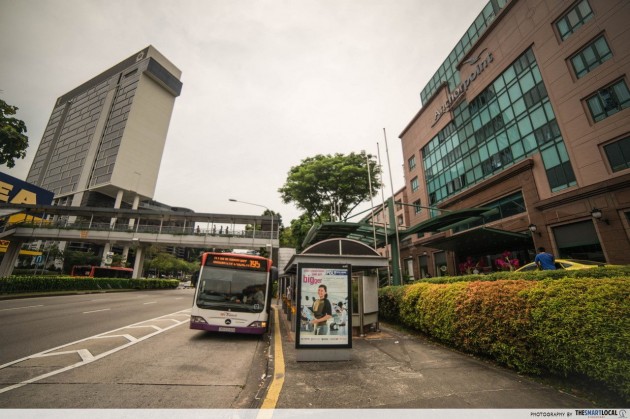 The former Archipelago Brewery Company (ABC) was opened in 1933 by then-President of the Municipal Commissioners, W Bartley. They produced Anchor Beer, a crowd favourite that outsold Tiger Beer by 9 to 1 from the 1930s to the 1960s. ABC’s proximity to KTM Railway also made it convenient for beer exports via the ports at Tanjong Pagar. 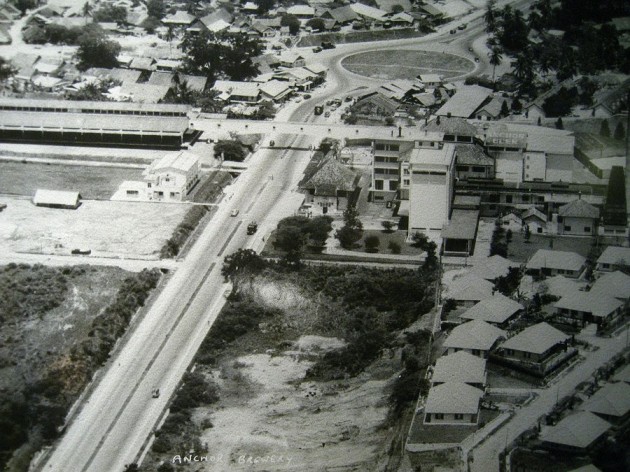 The main plant stood at Anchorpoint Shopping Centre’s current location, and bottled beers were transported to the canning line and warehouse where IKEA now stands, through a wooden conveyor belt which is now an overhead bridge. 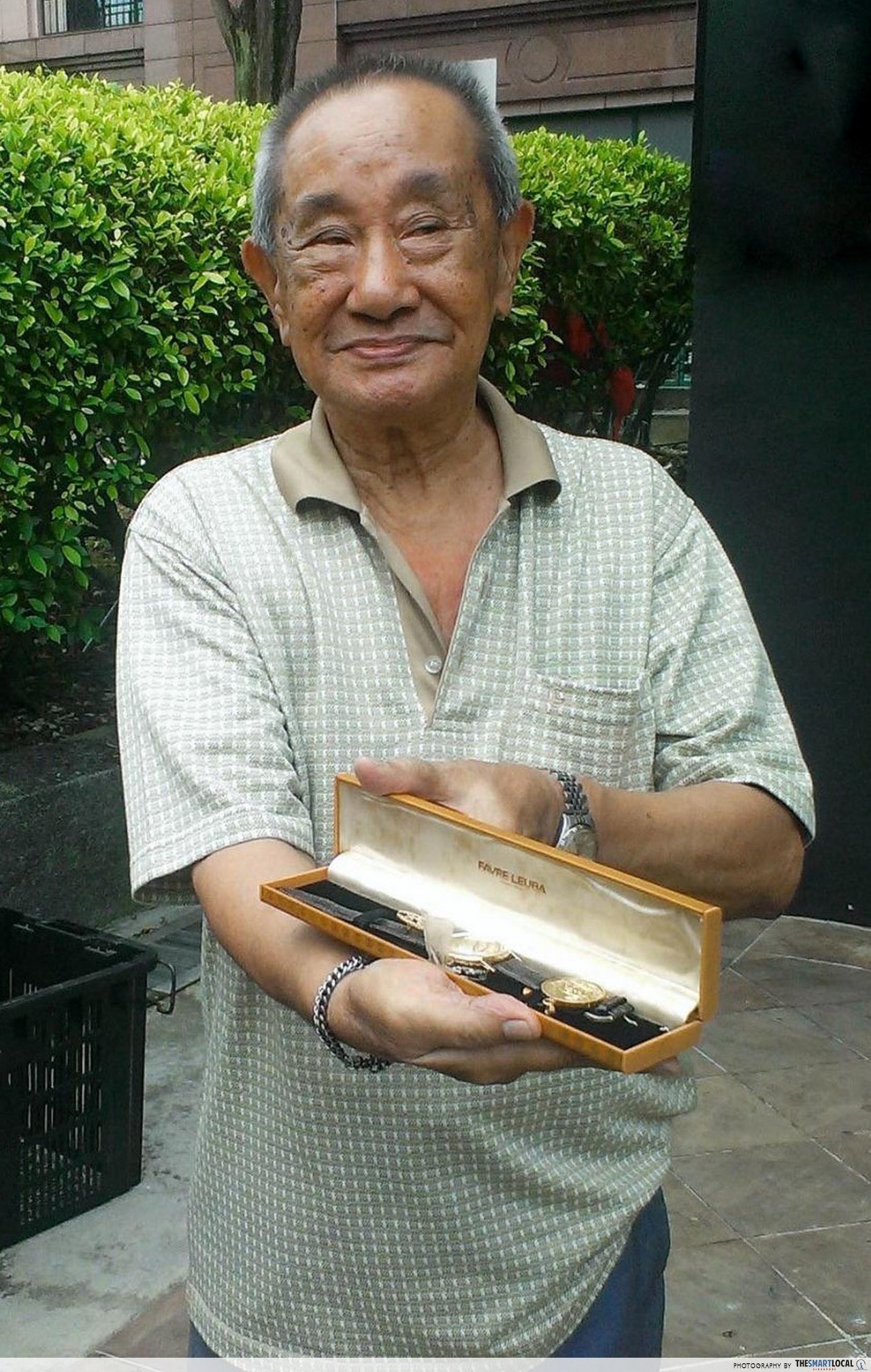 Mr Ng Moey Moey, 82, who had worked in ABC for 38 years, showed us his prized possessions – a watch and 3 medals – awarded to him for his decades of service. He fondly recalled that when he landed a job at ABC, his father was elated, as the company paid well and was known for employee welfare.

F&N and Heineken bought over ABC in 1941, but when Singapore fell to the Japanese in 1942, the Japanese expropriated the production facilities to produce Dai-Nippon and Kirin Beer. After the war, production of Anchor Beer resumed until the brewery relocated to Tuas in 1990.

10. Listen to intriguing stories from a WW2 survivor 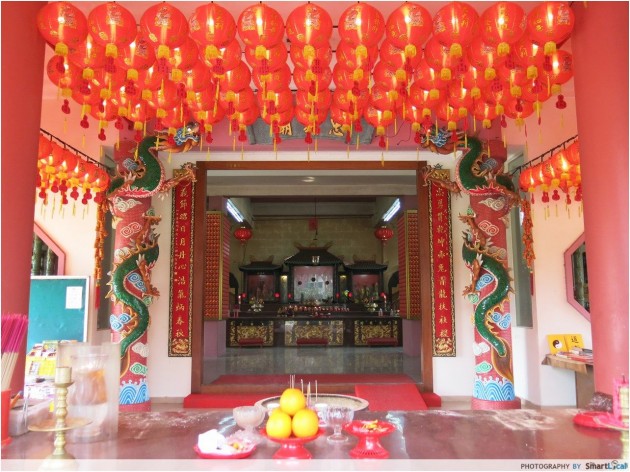 We ended our trail at Tiong Ghee Temple, and had a chit-chat with 89-year-old Mr Ang, whose family is in the temple’s committee. Mr Ang grew up in Boh Beh Kang (Hokkien for no tail river) Village in Stirling Road, where the temple originated. Back then, this place of worship was a simple altar set up in an attap hut. 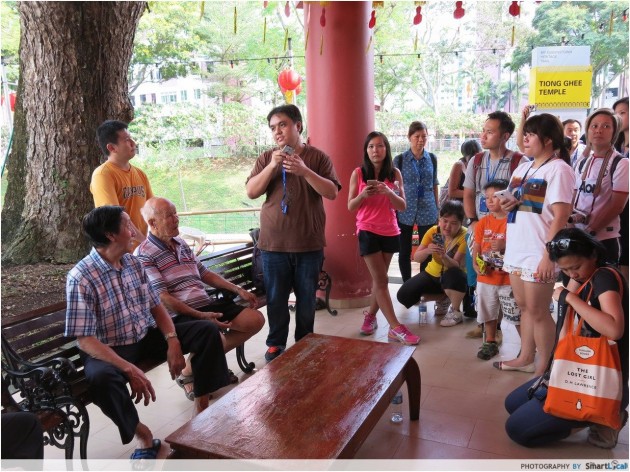 Mr Ang also recounted how during the Japanese Occupation, there were Japanese soldiers harassing girls in the village temple, so his father spoke to a high-ranking Japanese officer about it. Though it was a brave act, the Ang family feared for his life.

Fortunately, the story had a happy ending, because the officer commanded his soldiers to stop their inappropriate behaviour.

As the sights and sounds – and even humans – of olden Singapore fade into distant memory, we’re racing against time to capture the remnants. In times like these, we’re thankful to have heritage groups like My Community, who support us in this quest.

It was heartwarming to see how a common love for heritage brings together Singaporeans from all walks of life. The volunteer guides were especially inspiring. Ranging from youths in their twenties to senior citizens, their passion for heritage rubbed off on us – I find myself actively reading up on Singapore’s history even after the tour.

Even if you’re not that much of a history buff, you’ll get to be a tourist in your own country for a day! Who knows, this might spark your interest in reminiscing the yesteryears.

Labrador & Alexandra Heritage Tour is held on every 2nd and 4th Saturday of the month, from 8.30am – 12.30pm. The meeting point is Labrador Park MRT Station.

To register, you can visit their website, drop them an email at myqueenstown@gmail.com, or call Queenstown Community Centre at 6474 1681.

This post was brought to you by My Community.