Tiong Bahru – heritage within the heartlands

Ah, Tiong Bahru – the seemingly ‘hipster’ neighbourhood that everyone knows and loves. Prior to getting the opportunity to explore this estate for myself, I only knew Tiong Bahru for two things: cafés and bookstores.

But I stand corrected. Turns out, it has so much more to offer. From funky playgrounds that brought me back to the 90s, to chancing upon mysterious World War II bunkers, this quaint estate will have you stumped by its rich culture and history.

1. A playground that will make you feel like you’re in “Inception” 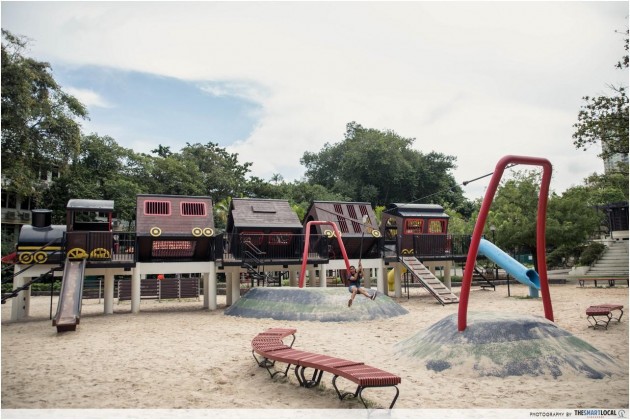 This playground has its own mini flying fox!

I remember the days of playing catching or hide-and-seek in huge stone playground behind my house where much of my childhood was spent running around in the sand with my friends, and taking turns to get on the tyre swings.

So you can imagine my excitement as I approached Tiong Bahru Adventure Playground, in all its sandy glory. 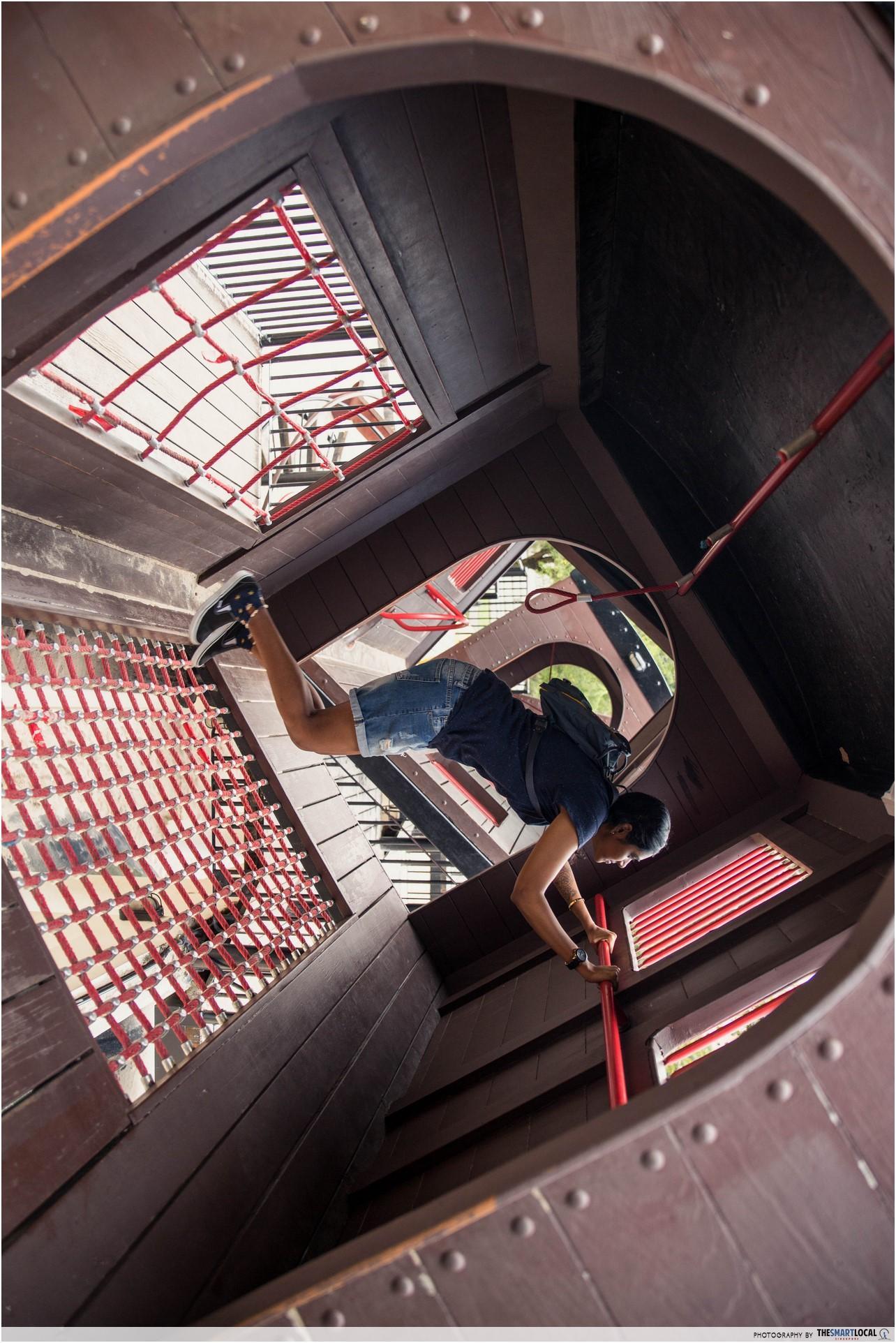 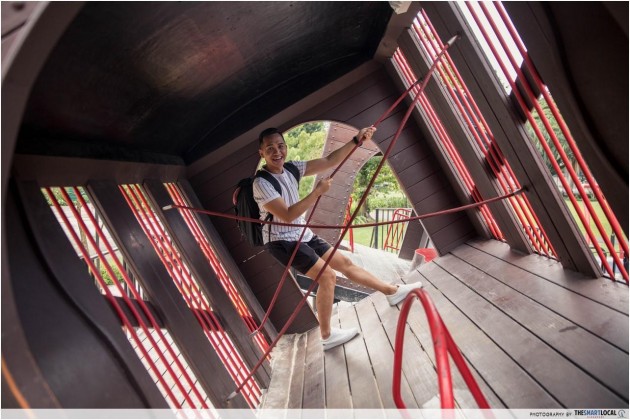 Be prepared to feel a little trippy. This train-shaped playground comes with tilted cabins, which make for excellent mind-bending shots. And don’t think that getting across the train is child’s play either – there are plenty of handrails for a reason!

2. Bend it like Beckham at this rooftop soccer court 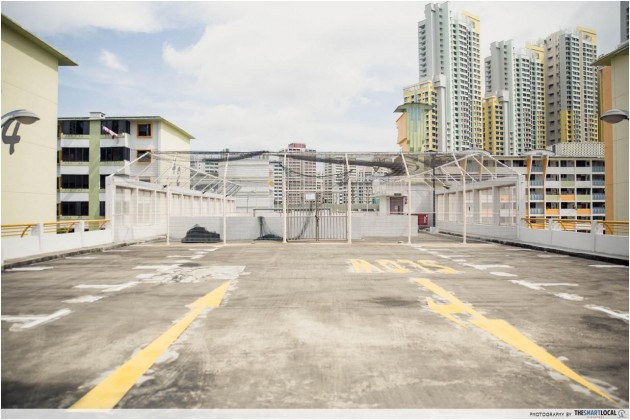 Located atop Block 44B, this hidden gem is the perfect spot to gather all your fellow football kakis for a good evening of fun. Don’t worry about your ball potentially being killer litter; the entire place is netted for safety. 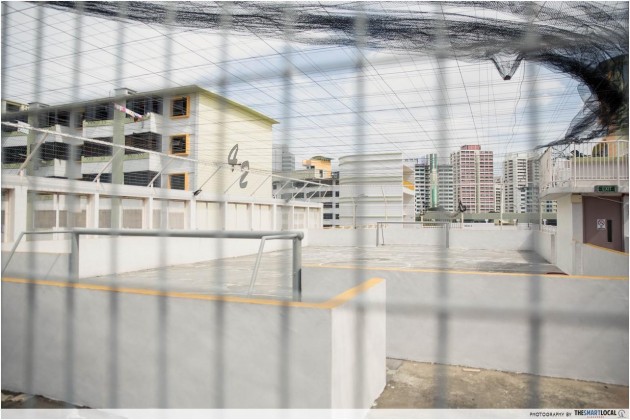 It’s also conveniently located right by Beo Crescent Market and Food Court. Tired after a long day of footie? Treat yourself to some yummy food – the market has good reviews for its curry rice and mee pok! 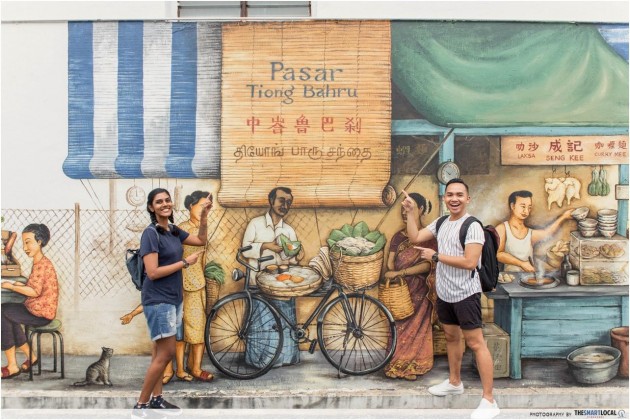 Go gai gai with the locals along Block 73

Put adventure on the map of your Tiong Bahru visit with a mural hunt that’ll have you combing the street for hours. Trust me, you’ll want to have Google Maps on standby for this one.

Here’s a challenge for you: Try your luck at finding all three of artist Yip Yew Chong’s intricate murals that are peppered inconspicuously along the streets. It’s no easy feat – you’ll be walking a lot more than you think! Think of it as taking a ‘scenic stroll’ to explore Tiong Bahru. 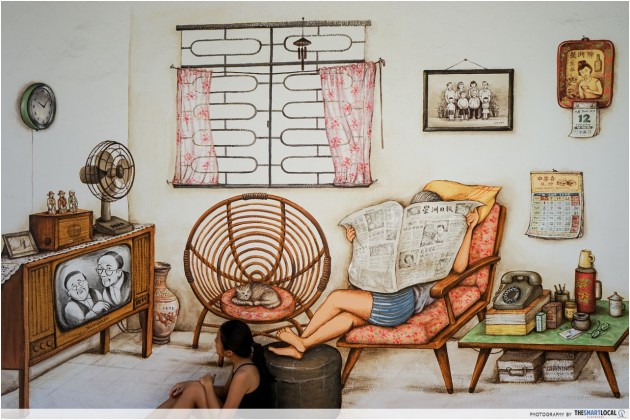 A quiet afternoon at home at Block 74 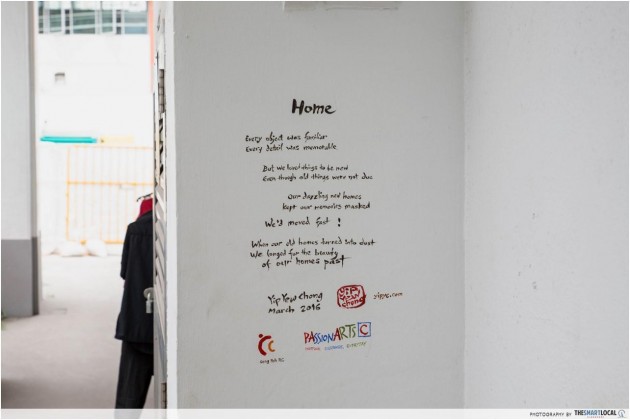 These walls aren’t just for an epic #ootd background. Inspired by childhood memories and nostalgia, each mural comes with an accompanying poem that gives us a little more insight into the estate’s rich history. 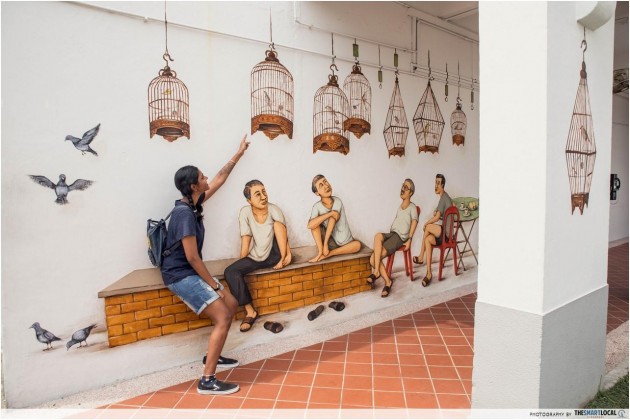 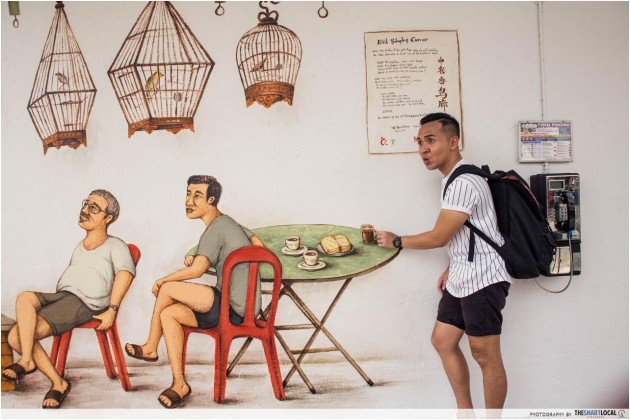 Grab some kopi with the birdwatching uncles of Block 71

Of course, you can’t leave without trying to spot the animal murals either. Make sure to keep your eyes peeled! 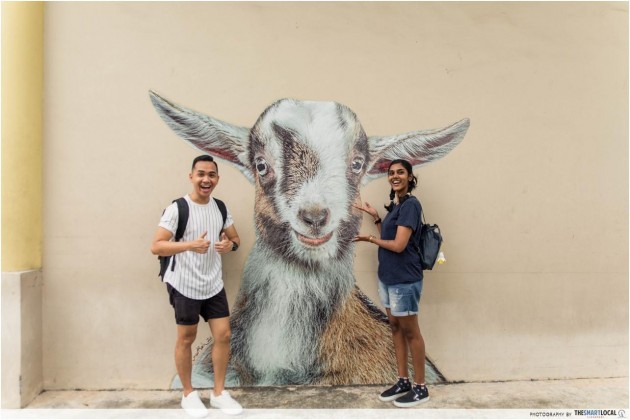 Try finding all three of these cuties around Tiong Bahru Market – Papa, Mama and Baby Goat.

Tiong Bahru is not just all about its trendy cafés and quaint stores. It also houses the tombs of one of Singapore’s greatest pioneers – right here within the heartlands.. 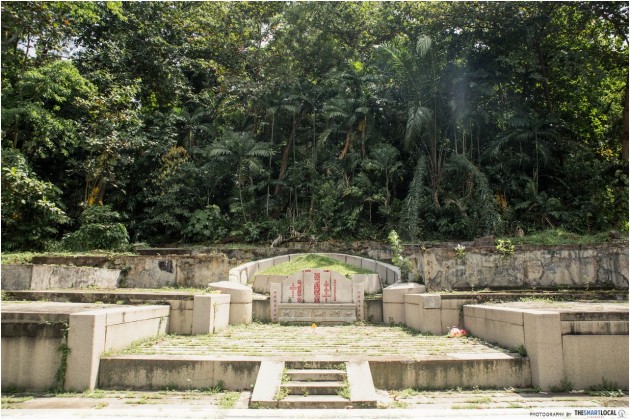 Though we may know his name – not all of us know his story. Tan Tock Seng moved to Singapore from Malacca in 1819, and started his life as a merchant before his success as a wealthy businessman. As a philanthropist, Tan Tock Seng contributed $5,000 towards the construction of Chinese Pauper’s Hospital; which we now know as Tan Tock Seng Hospital. And hey, that was some big money back in the day!

Interesting fact: Tan Tock Seng was the first Asian to be appointed as Justice of the Peace in Singapore. He’s also earned the title ‘Captain of the Chinese’, for helping settle disputes for Chinese immigrants 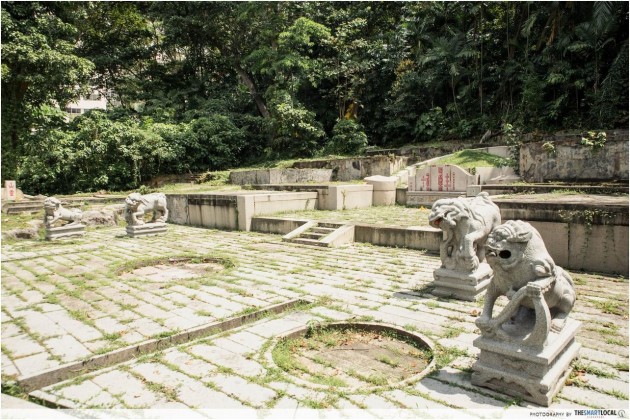 5. Get lost within an architect’s dream 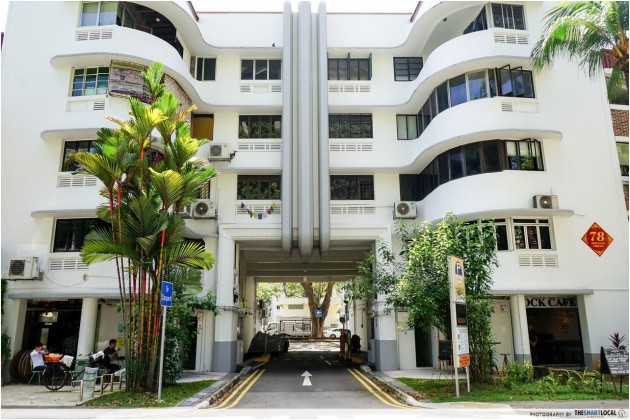 One look at the blocks here and you’ll realise they’re unlike any other. From horseshoe-shaped balconies to funky green windows, Tiong Bahru’s longstanding architecture serves as a reminder of our growth as a nation.

Built in the 1920s, the estate’s pre-war flats were inspired by the industrial age of the time. Think vintage automobiles, trains and airplanes. In fact, many locals refer to blocks 81 and 82 as the ‘aeroplane flats’, due to how the curvature of the roofs resembles the wings of a plane. 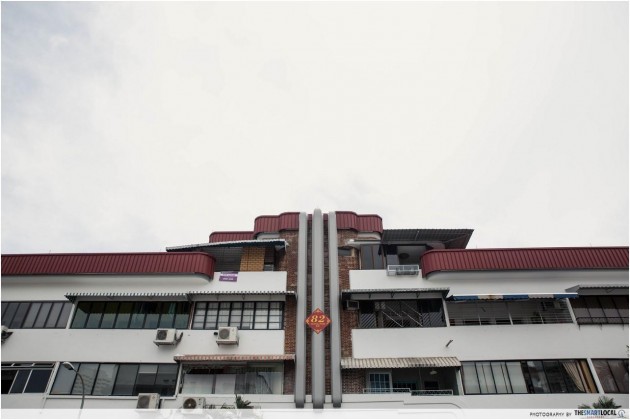 Just walking by these blocks gave me serious home envy. I mean, residing in an iconic estate AND living in a vintage flat? Now those are #apartmentgoals right there. 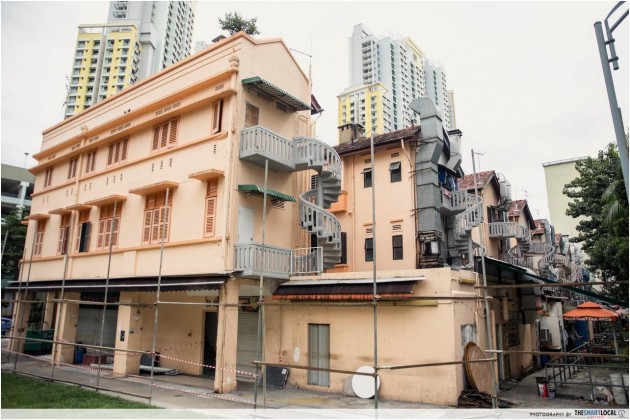 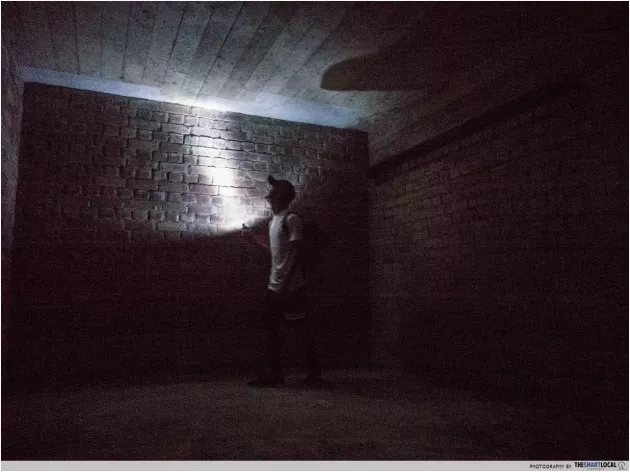 For some of us, family clinics housed in SCDF bomb shelters near our homes are the closest we’ve ever gotten to being in a bomb shelter. Well, you’ll be excited to know that Singapore’s last remaining pre-war air raid bunker is right here in Tiong Bahru – and this is something you HAVE to check out. 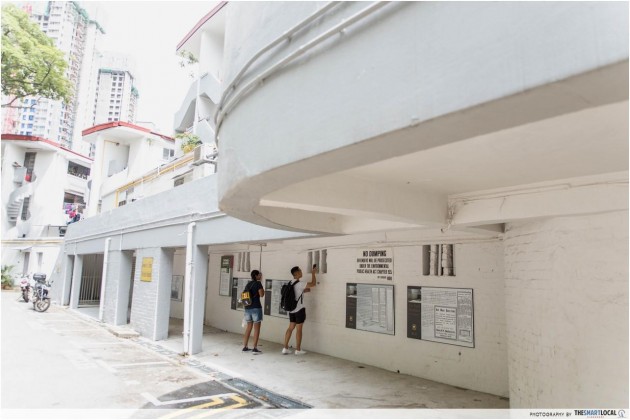 Before the outbreak of war forced the conversion of these bunkers into a civilian shelter, the area was meant to be an indoor garage and playground.

Today, posters line the walls of the shelter, informing curious passers-by of the history surrounding the place. You’ll also notice the gates to the interior firmly shut – so just tip toe as much as you can and sneak a little peek into the ventilation gaps. 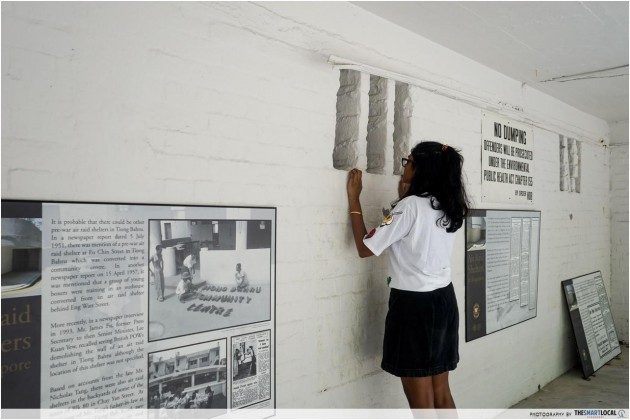 Here’s how the bunkers look on the inside: 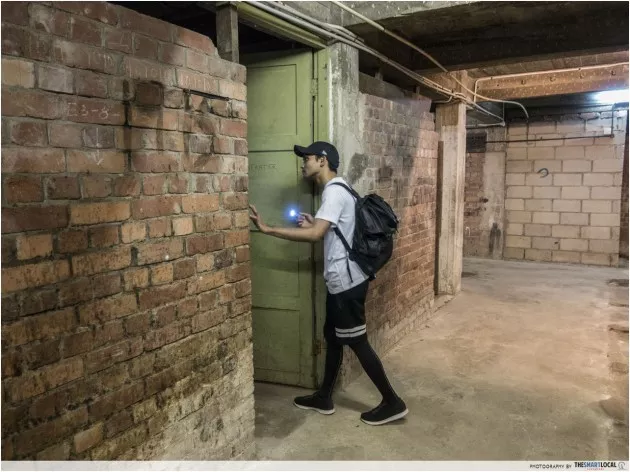 Note: Permission is needed from Tanjong Pagar Town Council in order to enter. 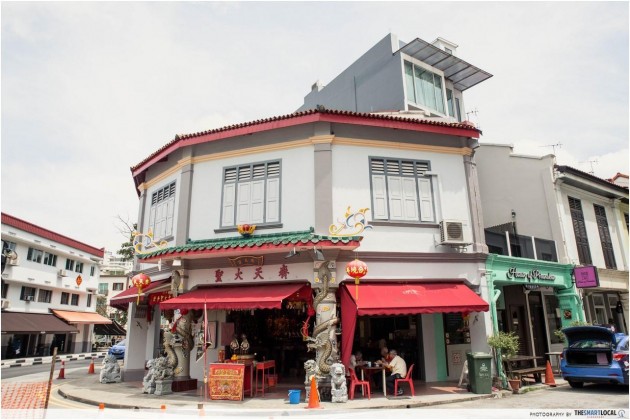 Adorned with majestic gold dragons and stone lions that guard its entrance, Qi Tian Gong Temple has been around since the 1920s. As if that’s not impressive enough, it’s also Singapore’s first temple dedicated to the Monkey God, Sun Wukong.

As a heritage site, you don’t have to come here just to pray. Embark on your own Journey to the West without travelling too far! 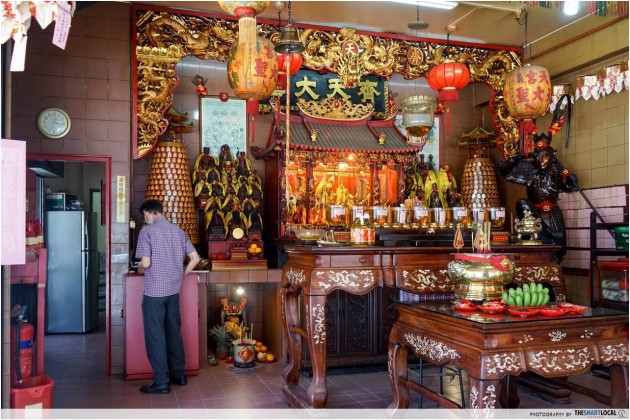 8. Visit a relic of Tiong Bahru’s past 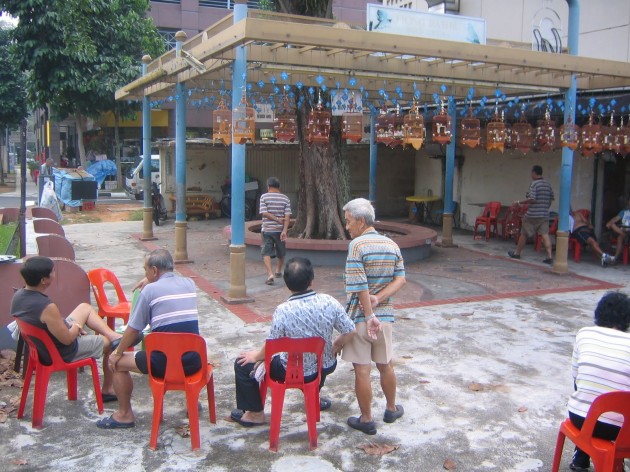 Built in the 1980s, the Tiong Bahru’s bird corner was popular spot amongst the locals and even bird enthusiasts from Malaysia and Thailand. A fun weekend back then must have been reminiscent of the Bird Singing Corner mural!

Fortunately, though the surrounding flats and coffeeshop were torn down in the early 2000s, this bird corner was preserved as part of Tiong Bahru’s culture. 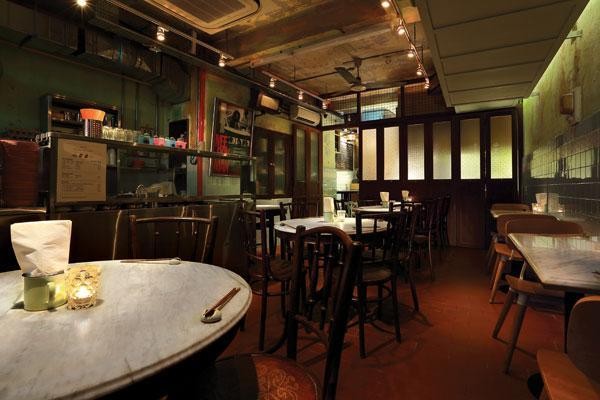 If you’re familiar with Tiong Bahru’s food scene, you’ve probably heard of Hua Bee Mee Pok. Located along Block 78 of Moh Guan Terrace, this unassuming noodle stall has been around for more than 70 years. It even was the set for Eric Khoo’s 1995 film, Mee Pok Man.

At night however, Bincho takes over. With a wide array of yakitori dishes to choose from, it’s definitely a different ballgame from a simple bowl of mee pok. Of course, you can’t forget how insta-worthy this place is. The juxtaposition of the izakaya’s industrial looking interior – where it almost felt like I was in a subway station – and Hua Bee’s modest eatery from the 1940s makes this place a charming dining spot. 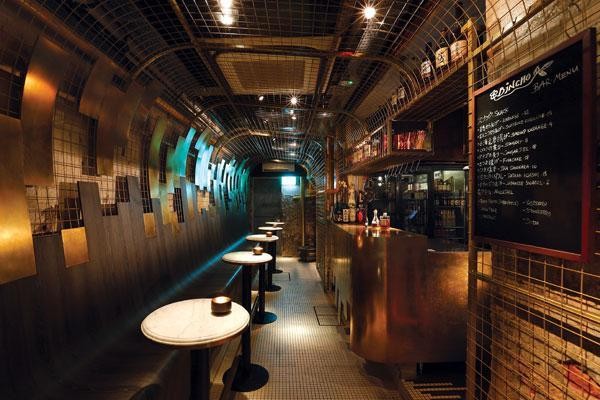 10. Stop by the oldest shop in Tiong Bahru

While walking through the alleyways trying to hunt down murals, we stumbled upon Yong Huat Upholstery, which is Tiong Bahru’s remaining furniture shop from the 1960s. 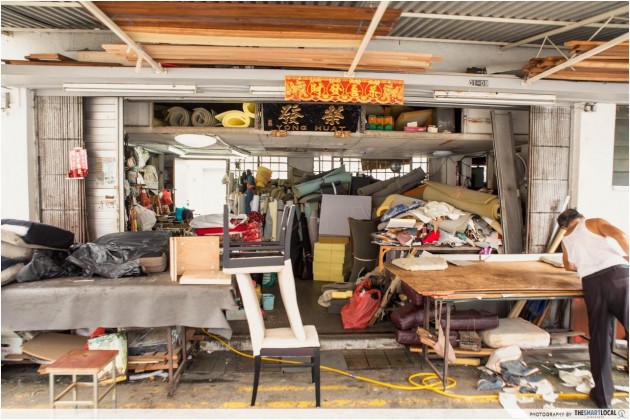 After a little chat with the friendly aunty, we learnt that Mr Tay Meow Quee founded Yong Huat in 1969, and has been in the upholstery business ever since.

The storefront is lined with a smorgasbord of fabrics, and we were lucky enough to witness one of the workers fix up some dining chairs. With advancing technology in today’s age, seeing the hard work that went behind doing things by hand definitely puts things in perspective. It’s a dying business – but one that stays afloat by its loyal customers and word-of-mouth. 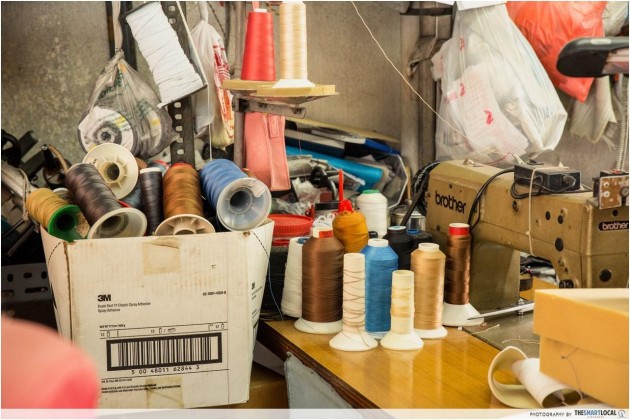 If you ever find yourself here, don’t be afraid to have a chat with the friendly aunty and uncle that man the shop. They’ll be glad to give you a mini history lesson!

Conserving our past – Tiong Bahru’s heritage

Tiong Bahru is one of those places that bring you a step back from the bustle of the city. Just a walk around the neighbourhood tells us stories from our past. From the green windows of pre-war flats, to murals that adorn the market walls, everything here has character.

Lucky for you, we’ll be heading over to this lovely estate for our next Insta-walk! So join us on 14 January 2016 as we go on an adventure around Tiong Bahru – a place where life feels a little warmer.