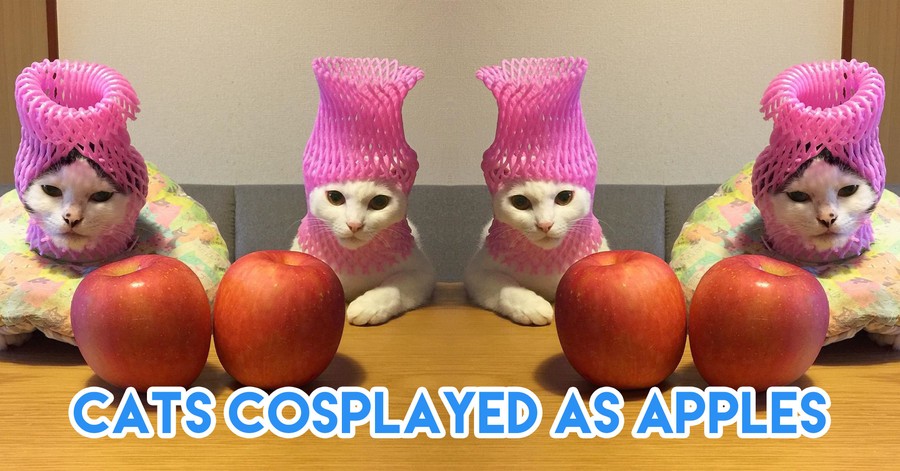 Throughout 2016, your Facebook wall has been plastered with evidence of your cat obsession. Videos, photos to full-blown articles, your friends have only seen 1% of what’s been posted as you’ve kindly shared the rest with “only me” as the privacy setting.

In case you’ve missed out some highlights from last year’s cat scene – from Japanese cats cosplaying as fuji apples to a cat blatantly lepaking on an MRT gantry – here’s the most viral cat content on the Internet to keep you entertained in anticipation for the newsworthy cats of 2017.

1. The Davy Jones of Cats made an appearance 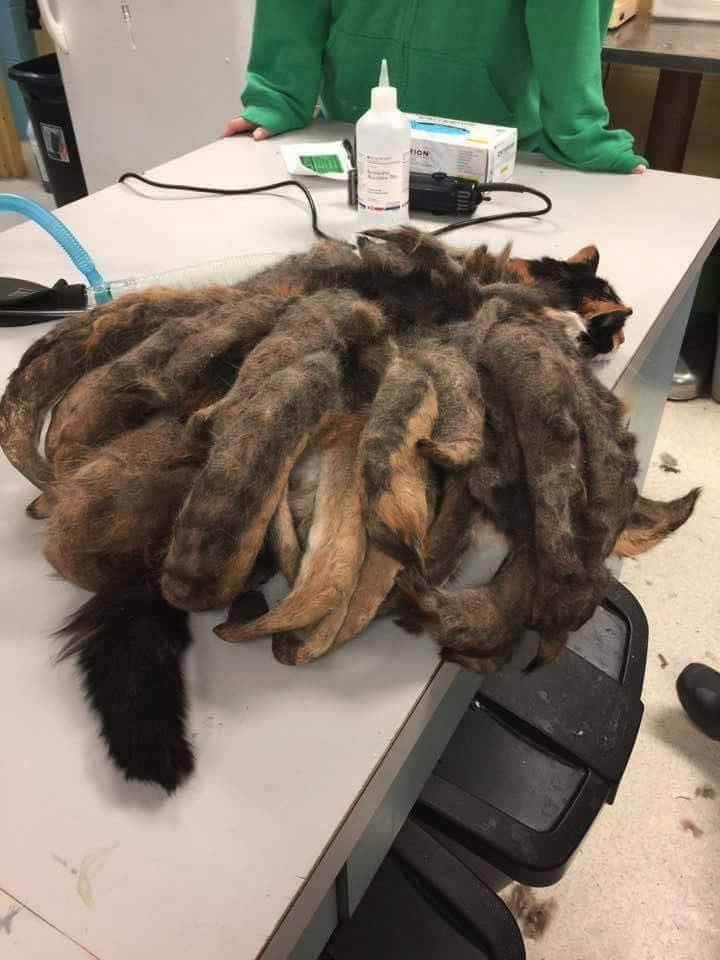 This wasn’t a costume idea from a Pirates of the Caribbean diehard fan. These Davy Jones-y tentacular protrusions are what two pounds of dreads looks like on a cat – a cautionary reminder that you should never forget to brush your cat.

The 2016 Halloween Doodle featured the feisty feline Momo, a black cat on a mission to rescue her School of Magic from mischievous spirits. And we just couldn’t get enough of swiping the shapes of symbols above the ghosts’ heads. None of us did any substantial amount of Googling that day. We were far too distracted by this addictive doodle. 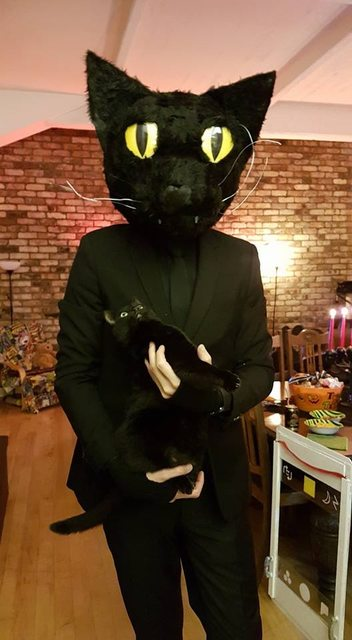 And if you somehow made it to the Reddit page, you might’ve stumbled across this cat and his doppelganger hoomin. Cat’s face = priceless Source 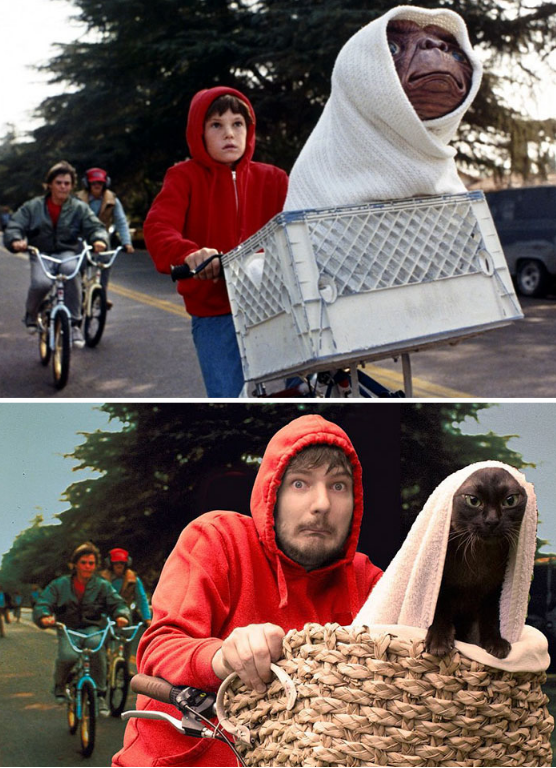 Props to this cat and his human for going where no cat-owner duo has gone before – recreating movie scenes from Hollywood blockbusters. From the bloody chestburster scene from Alien to the cycling scene in ET right before the BMX takeoff, these two nailed the parts.

Julie Andrews sang about “whiskers on kittens” being one of her favorite things. Blowing the lady out of the water is Agito666, who combined his two most favorite things – DOTA 2 and the cats of Neko Atsume – to create this life-completing card collection. 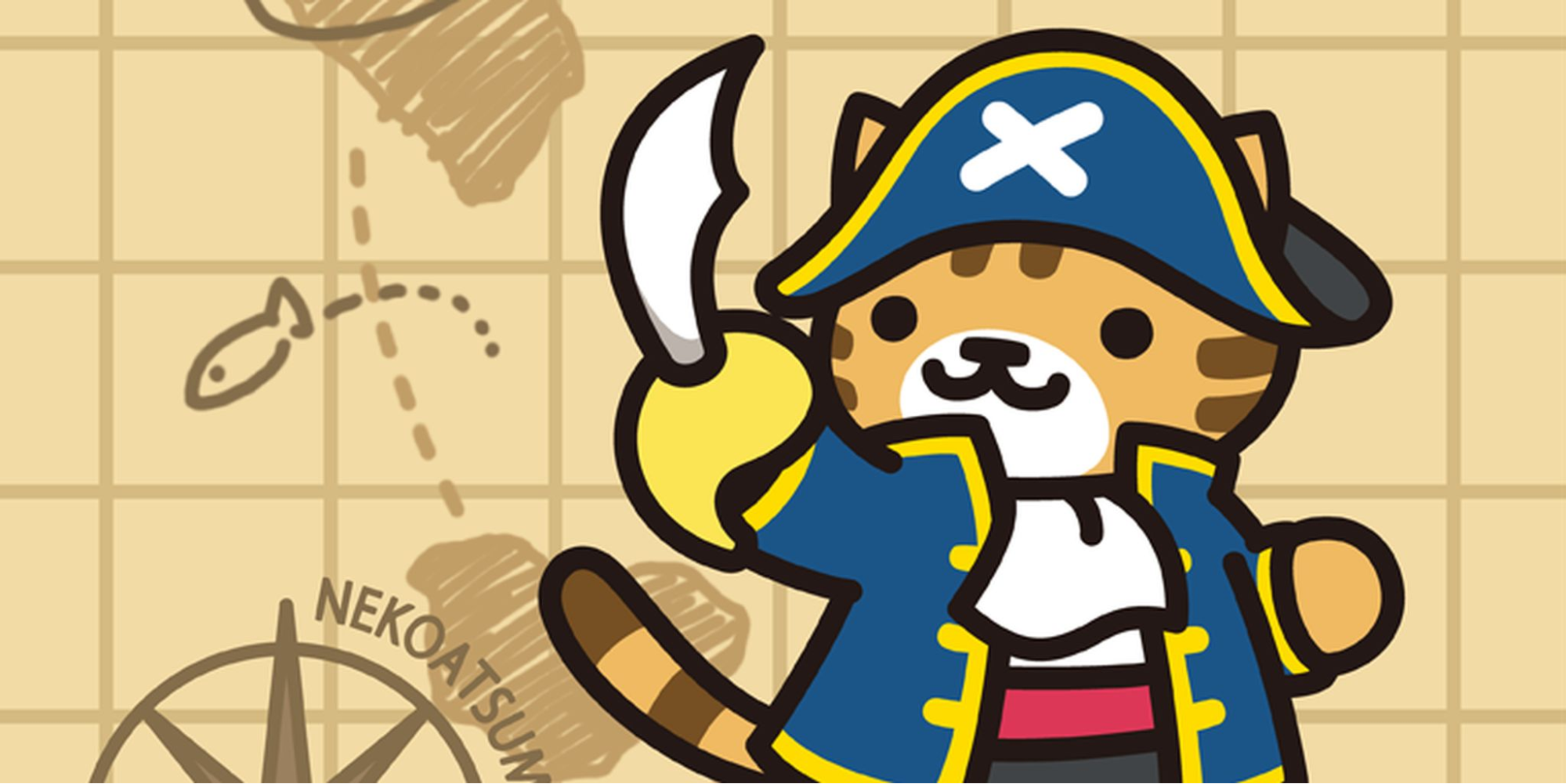 And if you’re a Neko Atsume fan with zero DOTA awareness, you might better remember the release of Bengal Jack. Fess up, you blew all your ritzy bitz (and your temper) trying to lure this fancy pantsy scallywag into your garden.

5. The rapper who raps only about cats 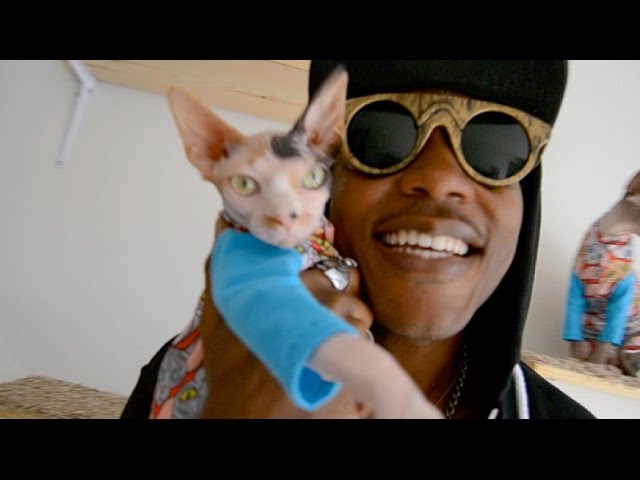 Rappers been just spitting bars about pussies since the birth of rhythmic speech, but iammoshow has built his rap empire on just this one thing – Cats. Check him out. You might develop a soft spot for this loveable “cat man” who’s also a big advocate for cat adoption…

But we all know you’re only at his Youtube Channel for the four cats making cameos in his music videos.

6. Cats wear hats made with their own hair 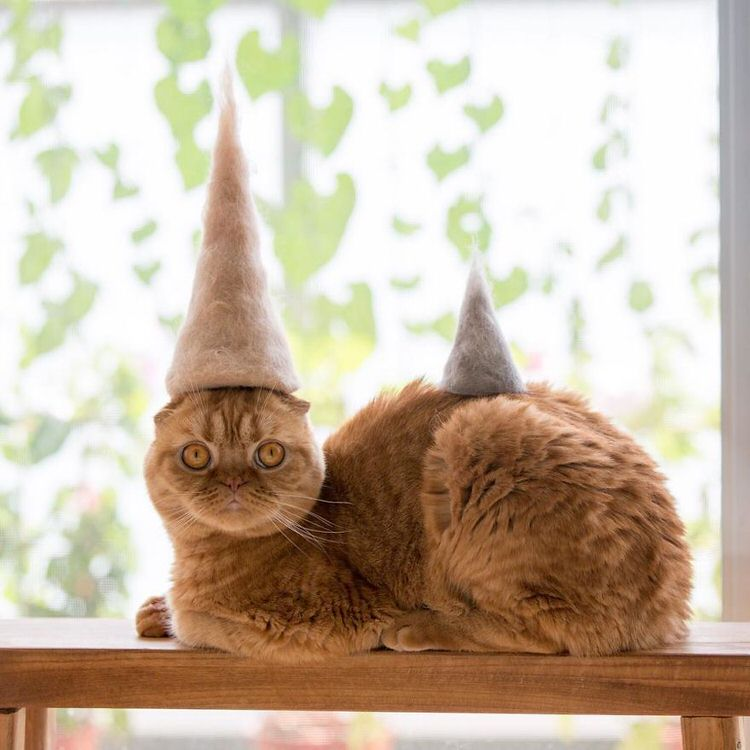 PETA can’t throw shade at these fur hats, because they were made from the sheddings of these very feline fashionistas. And if you thought repurposing your cat’s fur as pillow stuffing was an ingenious idea, these cat-lovers have inspired us to take fur-upcycling to new heights –  perhaps you’ll consider wearing these conical hats for your birthday party next year?

7. Meowijuana is now on sale. And it’s LEGAL! 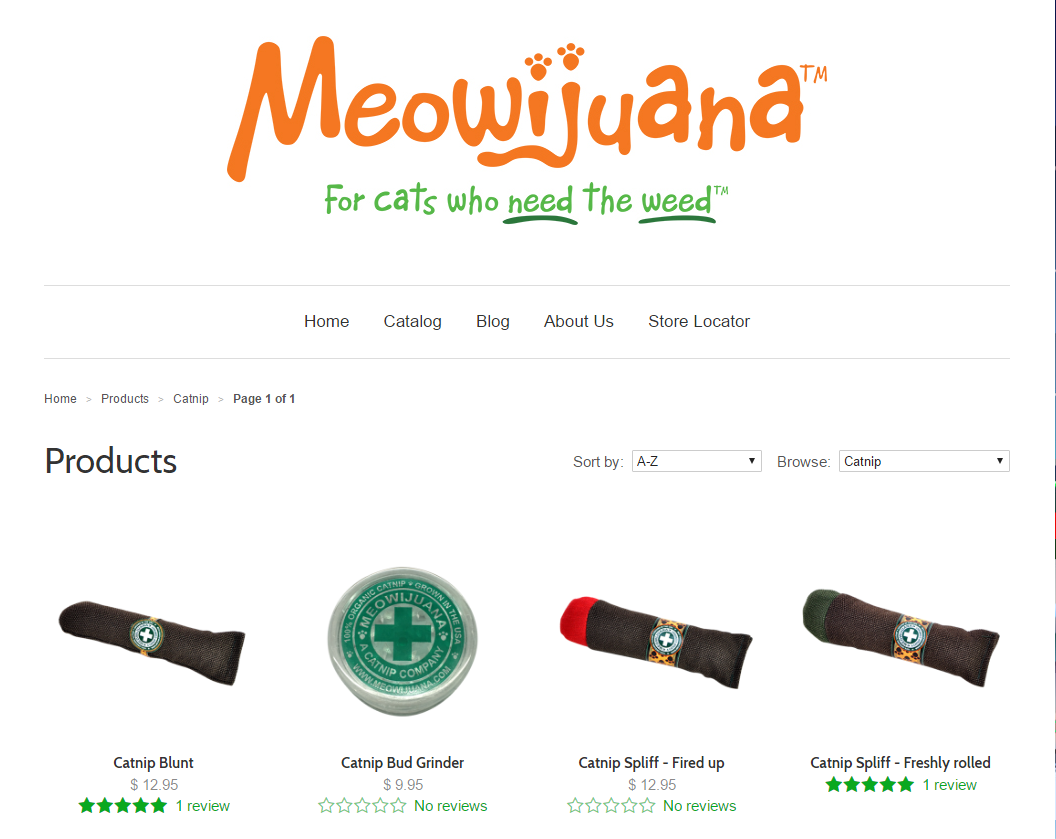 Specially for cats who need the weed, this company’s found an innovative marketing solution to selling conventional catnip – under the cheeky brand name Meowijuana. Their furmacy sells all sorts of catnip from blunts to spliffs, it’s highly unlikely you’ll find this in local pet stores.

Just head to the website to order the products with your Amazon account and don’t forget to get your kitty a Medical Meowijuana ID on your way out.

8. Grumpy Cat now has her own gaming app

If Grumpy Cat – real name Tadar Sauce – is your spirit animal, you’ve reason to rejoice, because this douchey pussy has herself an app now. Play mini games starring Grumpy Cat, share Grumpy Cat memes, even unlock Grumpy Cat stickers on iMessage. Clearly the developers under-promised and over-delivered when they named the app “GC: Worst Game Ever.” 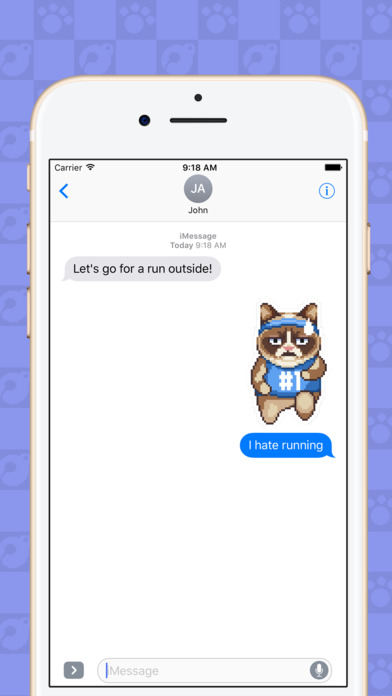 Purrfect shootdown for anyone who suggests running as a new year’s resolutions. Source 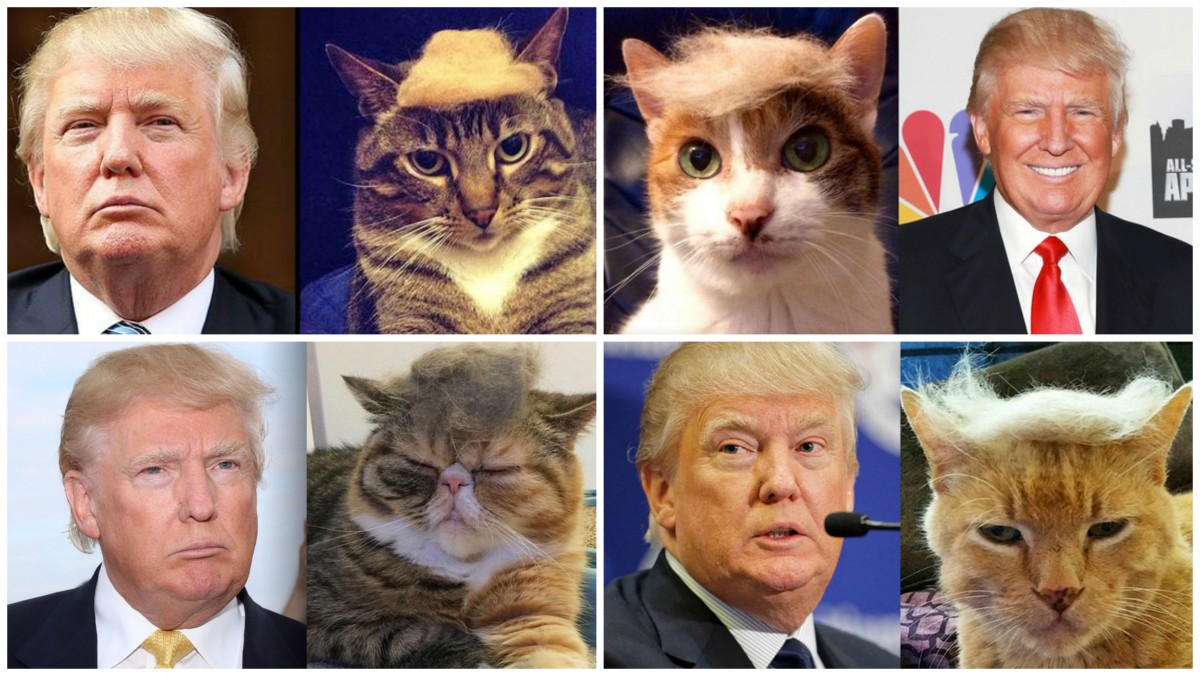 It’s hard for Donald not to be a sour puss, when these cats wore their toupees better Source

We have to applaud @trumpyourcat sparking off a cat-centric campaign involving 4 simple steps: Brush your cat. Form the hair you brushed into a toupee. Place toupee on cat. Share with @trumpyourcat. Although nothing new has been uploaded since the elections, but we’ll be coming back to see cats with toupees fleeker than the newly elected POTUS’ crispy crown.

10. We found 500 cats have been hiding at this Hawaiian hideout

Hawaii is one dreamy holiday destination. And now lonely cat ladies have more to do there than just ogle sun-kissed hunks riding waves – snuggle up with 500 loves of their lives, all in one place. 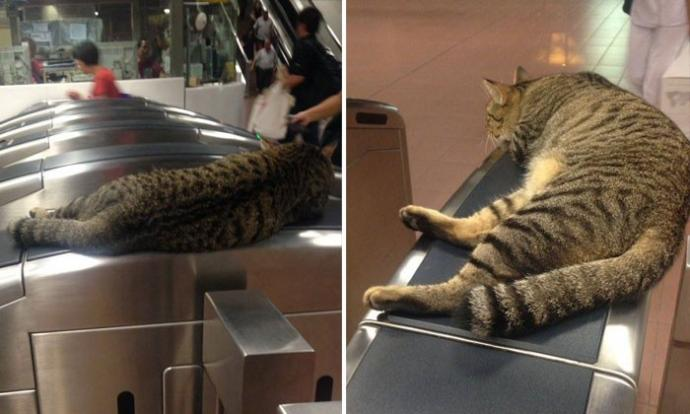 Exhibit 1: The one who didn’t bring bother bringing his EZ-link Source

Exhibit 2: The one who casually opened his “coffee shop” at a heartland hawker centre Source

12. STB made an official cat lover’s guide to Singapore 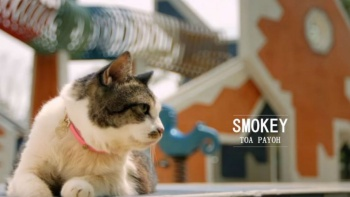 You think the cats in your neighbourhood just loaf about in their free time. But no, you’ll find out they lead very vibrant lives. Read YourSingapore’s official Cat Lover’s Guide to Singapore and discover legit recommendations from alley cats like Smokey. And these guys sure know where to get some lip-smackin’ ice cream.

It’s not just people that paint the colours of Singapore, but also our many neighbourhood felines. Which kitty will emerge as the most legendary of them all? #YourSingapore #Cat

Posted by YourSingapore on Wednesday, January 13, 2016

13. They released a cat version of monopoly 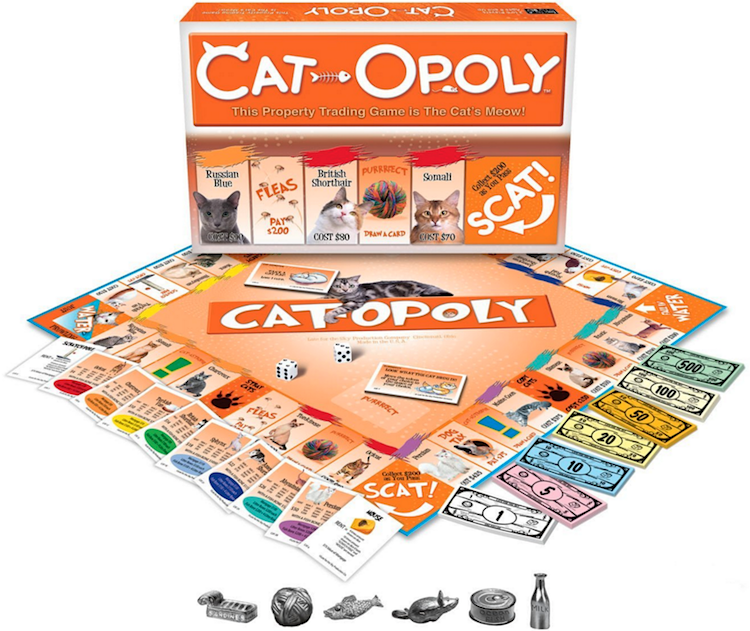 Who needs Mcdonald’s Extra Value Meals game labels when you can collect cats instead. Free burgers and ice cream has got nothing on “Cat-opoly”, where you can collect Maine Coons, Persians to Russian Blues. You can also expect litter box for “houses” and fish bones for “hotels”. So don’t procat-stinate any longer.

Buy one on Amazon.com.

14. Cats can now take their own selfies with this app

Candid Catmera is a must-have in the app arsenal of cat-lovers. Not only does it boast of in-built feline facial recognition function, it also has cat-tractions to lure kitties into capturing selfies on your iPad or iPhone.

Whether it’s a fish tank, scampering mouse or even a can opener busting open some cat food, Your cats won’t know what hit them as they unsuspectingly tap on your screen. And if you get the app at the Apple Store today, you’ll contribute to a good cause, because half of the $2.98 is going to the SPCA.

15. YAAS. The starter pokemon on Pokemon Sun & Moon is a cat 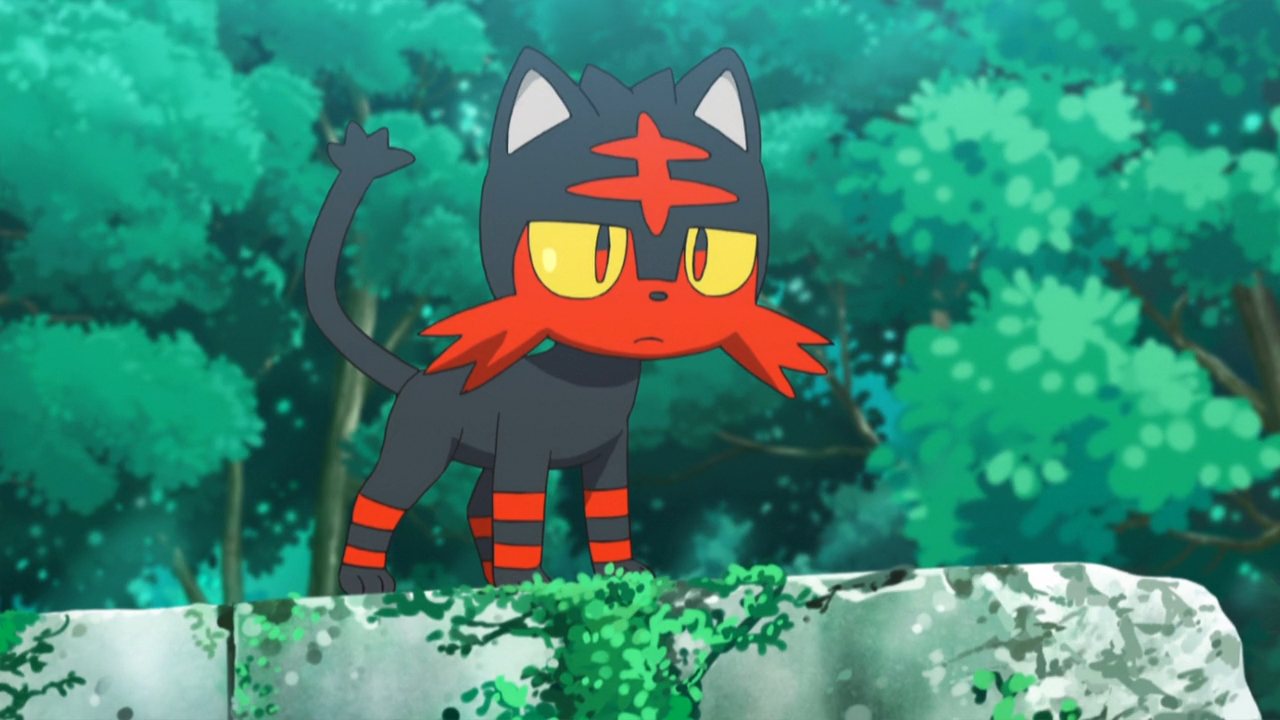 The cutest cat-inspired pokemon since Meowth is Litten from Pokemon Sun and Moon. Don’t be beguiled by it’s adorable exterior, according to the Pokedex, “While grooming itself, Litten builds up fur inside its stomach. It sets the fur alight and spews fiery attacks, which change based on how it coughs.” You will cower at this harbinger of great balls of fire.

16. The cat who lost his two front legs and now walks like a t-rex 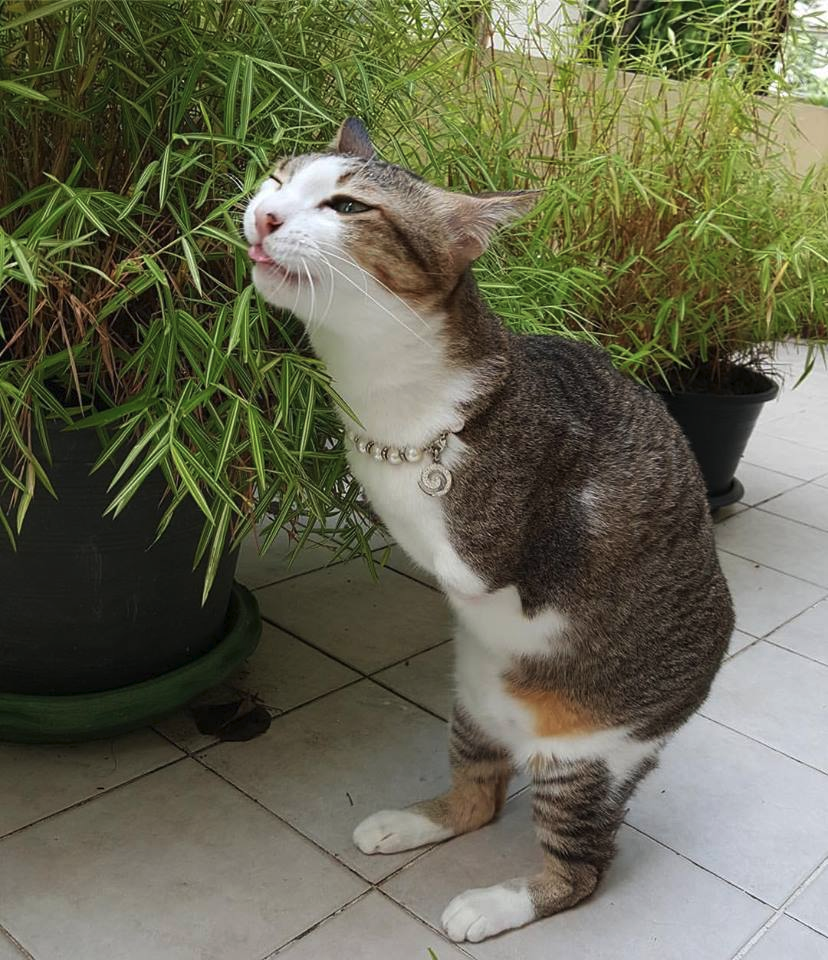 They call this guy Able Maew. One thing’s for sure, the word “disabled” is not in this cat’s dictionary. Having lost his front legs in an electrocution accident, he’s living proof that cats have nine lives.

17. These cats watched their humans eat all 365 days of the year

Follow @naomiuno for more sashimi shenanigans from Japan, where these kitties just can’t keep their paws off their owner’s food. All they have to do is look longingly at food and they’ve already amassed 117k followers, published their first book – a.k.a. way more successful than me and you. 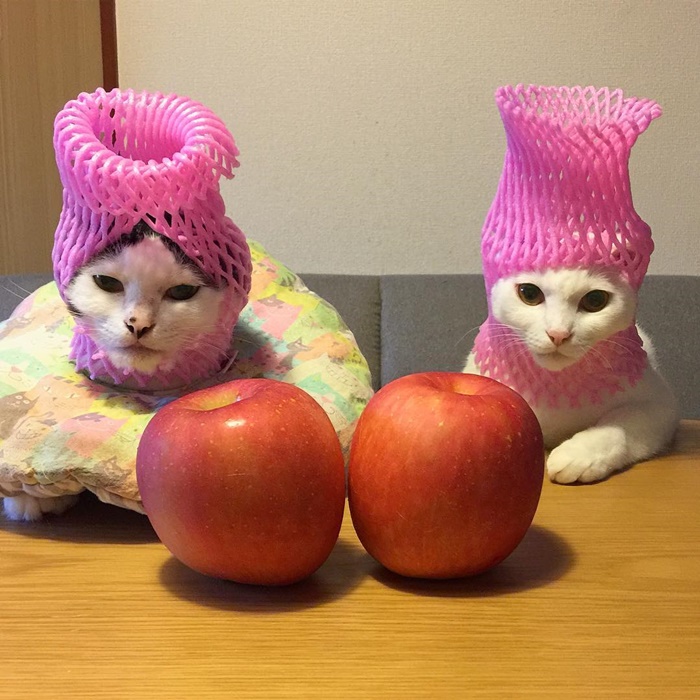 18. The heartwarming story of couple who saved cat frozen to ground

Getting glued to the ground after a snowstorm, this cat found himself in a real sticky situation. Thankfully, a resourceful Russian couple came to the rescue, dousing the frosted fur with what seems like warm water (or vodka). 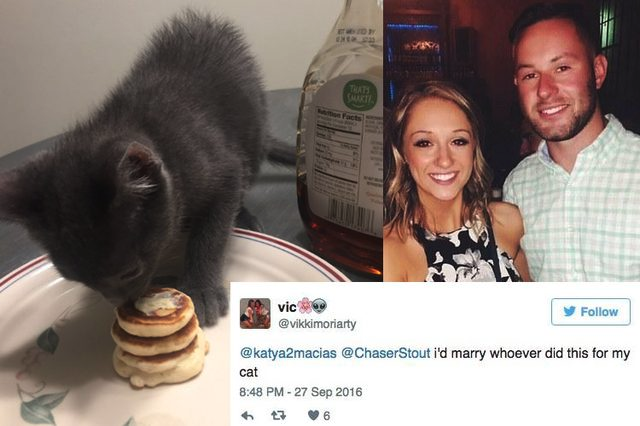 Ladies, it’s official. The new criteria for husband material = makes baby flapjacks for your furkid. Yes, this man Chase Stout not only knows the way into a kitten’s heart, he pretty much got all the ladies of the internet swooning.

With a man this sweet, we won’t be needing any more syrup on our hotcakes.

20. They’re making a PC game you can play as a cat

If you’ve always wanted to be a cat, you finally can with the videogame HK. Teleporting you into a dystopian city, explore a gamescape inspired by Hong Kong’s Kowloon Walled City on four legs. The game’s still in development, but we’ll wait as long as we have to, to become this ninja cat with a futuristic backpack.

Last but not least, in 2016, we learnt how to delicately break it to our cats that they’ve been yearlong asses/angels from this guide to giving your cat a performance review.

Who would’ve imagined that the very tactics our bosses use to improve our work productivity – performance improvement plans to situation-impact-behaviour (SBI) models – could also be used to evaluate the overall purr-formances of our cats*.

*Expect an 80% reduction in poop related incidents over the next quarter, now that you know how to give them constructive feedback.

And if we had to review 2016’s cats of the interwebz – we say they’ve set high standards for the feline future of 2017.