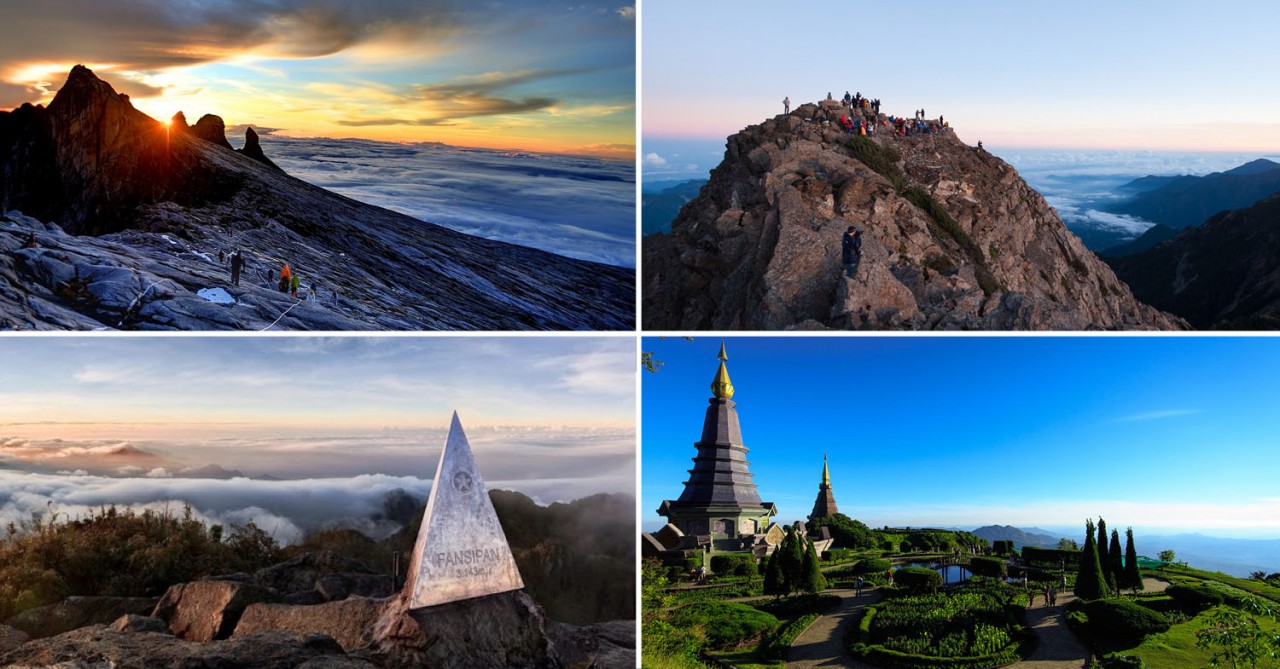 To the bulk of us, hiking only extends as far as Macritchie Treetop Trail or Bukit Timah Nature Trail takes us. After all, the highest point in Singapore happens to be Bukit Timah Hill, which stands at a whopping height of…164m.

For those of you who’d like to take it up a notch literally, your next best option would be to scale the mountains beyond Singapore. Here are the highest summits in our neighbouring countries for all you high-flyers to attempt. 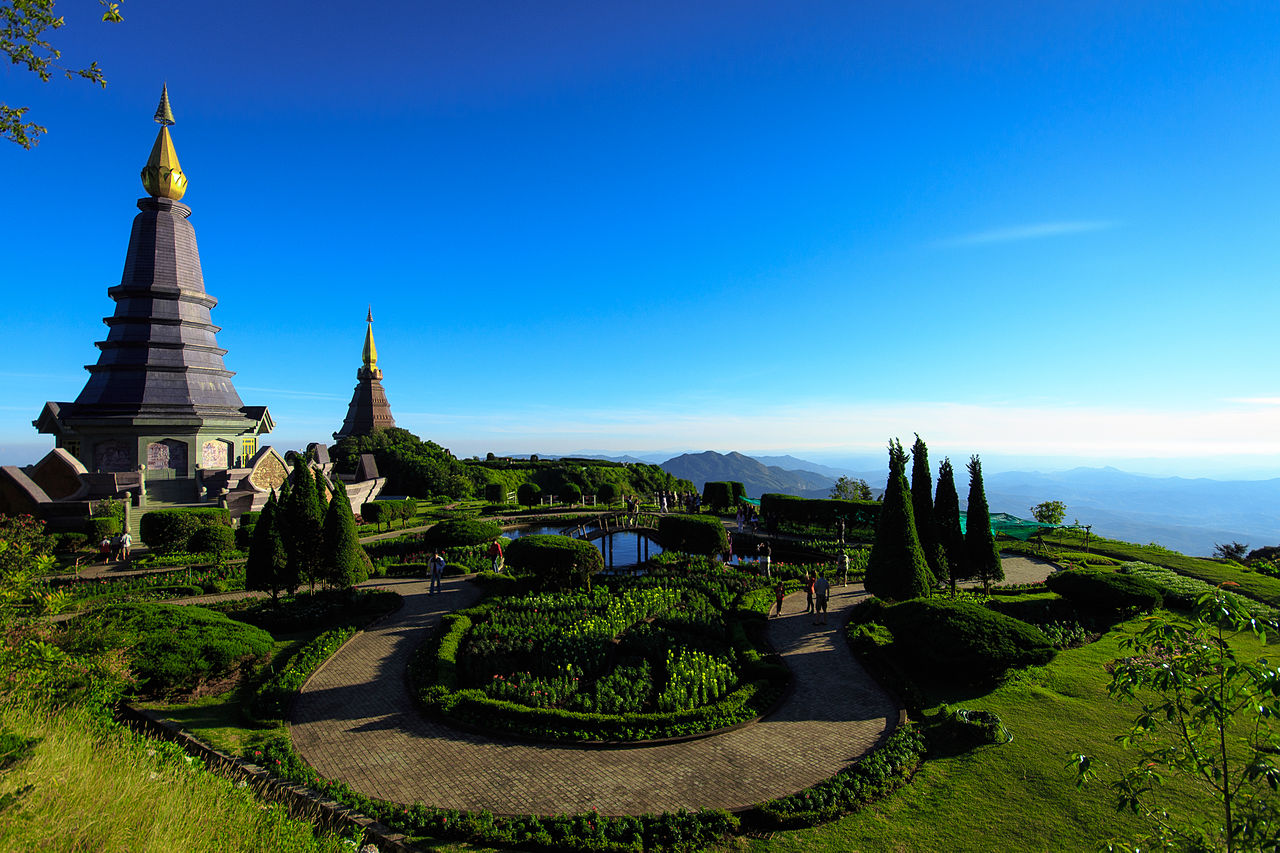 Unlike the usual rocky, and trepudous mountain hikes, Doi Inthanon provides a nature-immersive hike, passing through terraced rice fields, hill-tribe villages, and waterfalls to get to the summit.

Lush fauna and flora fill the surrounding area, and many climbers choose to extend their stay here to explore the area as the actual hike takes about 3 hours only. 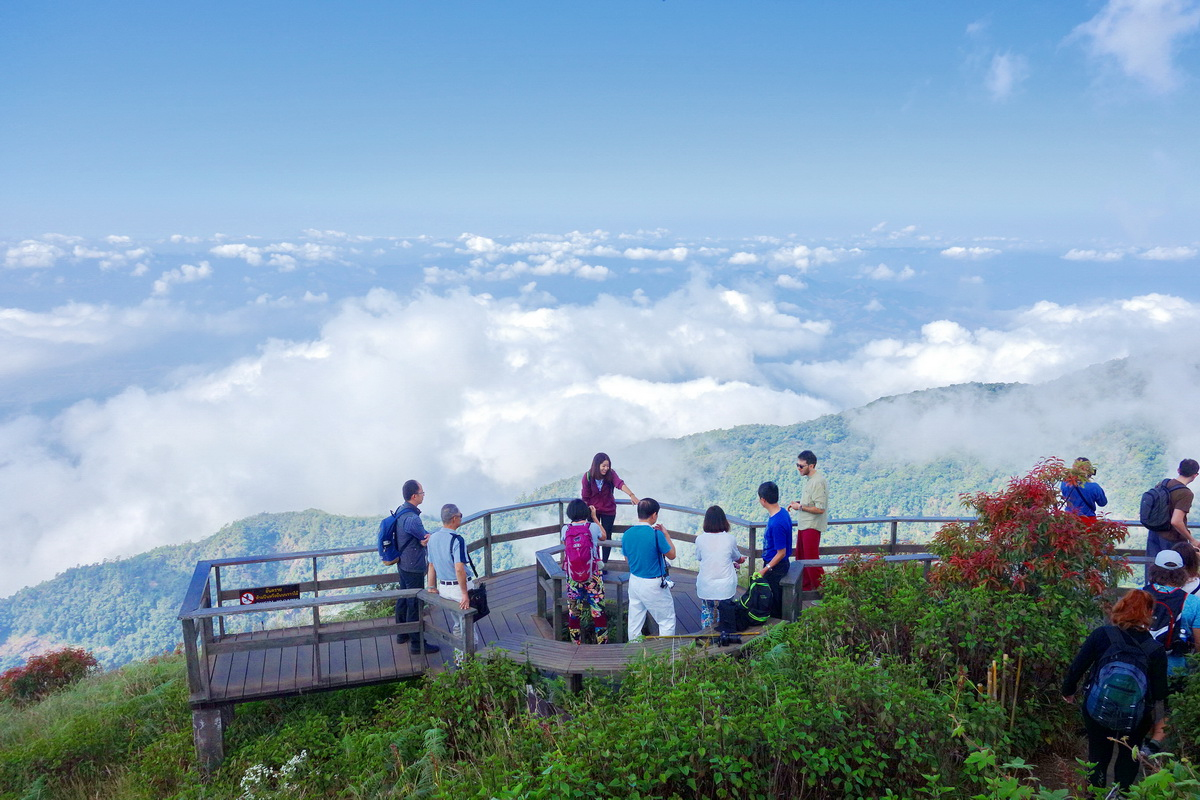 If you’d like a fully-planned itinerary and a guide to bring you around, book a tour with an agency to ease your difficulties. But if you would rather the free and easy route, simply rent a car before driving to the district – it’s just a straight route, so drivers who are inexperienced with Thai roads won’t have to worry about traffic. 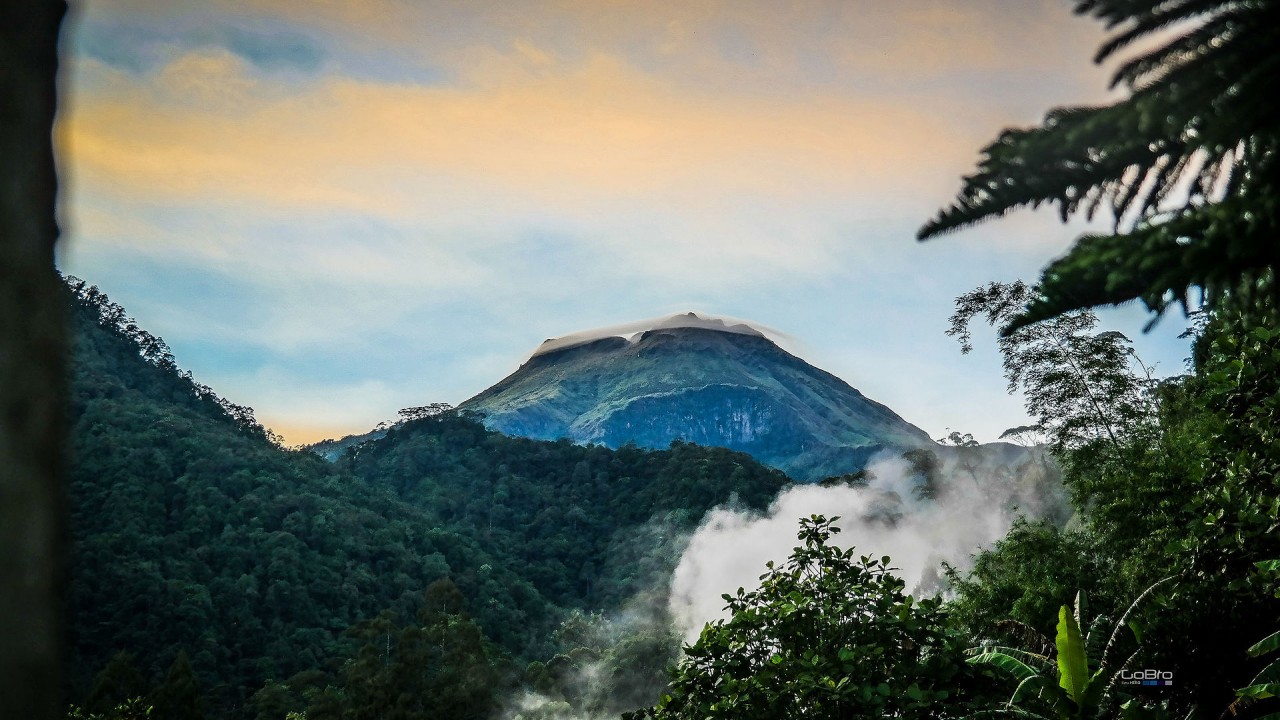 Mount Apo, Philippines’ tallest mountain and volcano, just reopened last year for climbers after a year-long closure since a fire. Several trails from North Cotabato and Davao provinces lead to the summit, with the Kidapawan trail being the easiest and fastest route to embark on. 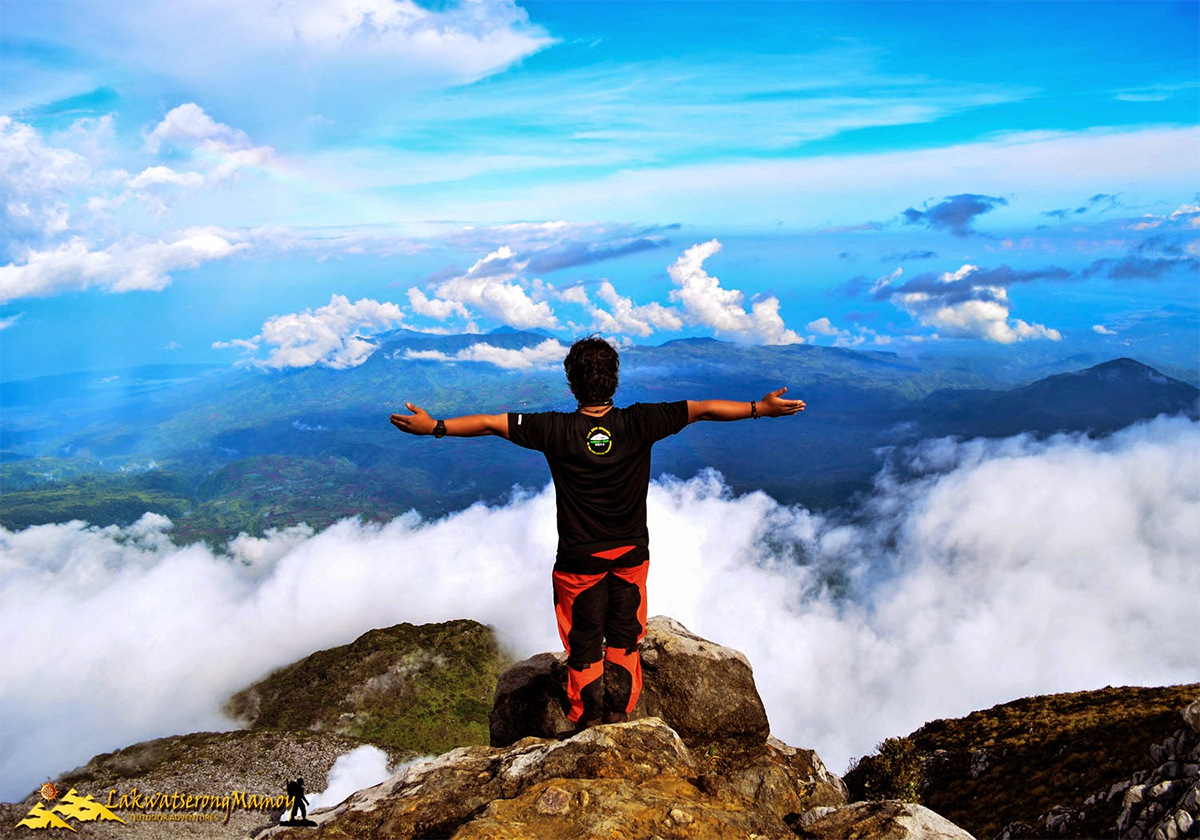 Before your trip, it’s a must to coordinate with a Kidapawan-based tour agency. From there, you can also arrange guides (₱800/day ~S$20), porters (₱350/day ~S$9), and transportation from Kidapawan to the mountain base. You’ll also get a climbing permit (₱750 ~S$19) from them before heading off for the hike.

While the full climb can be completed in 10 hours, including a 1 hour lunch break, it can be quite a rush. Hence, most climbers only make it through two thirds of the journey on the first day, before setting up camp and completing the remaining 3 hour hike to the summit in the morning.

Kidapawan trail may be the easiest, but due to the law of coordinating with a tour agency, it is also the most expensive route to take. Opt for Makilala or Mount Taloma trails if you want to cut costs and don’t mind a more tenuous route. 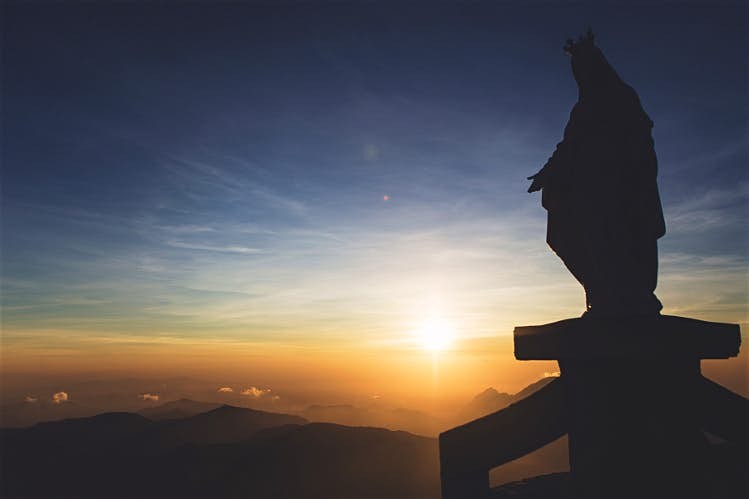 With a 3-metre tall statue of Virgin Mary adorning its peak, Mount Ramelau is most often visited in March as part of an annual Christian pilgrimage. But religion aside, Mount Ramelau also provides a stunning view for a short hike – the bulk of the journey up is conquered by car, with the actual hike only being a 2-4 hour journey.

Those planning to reach the summit by sunrise can drive a rental car to the village of Hatobuilico in the day and stay a night at a homestay for US$15 (~S$20). From there, book a guide for about US$10-30/pax (~S$13-40) as navigating alone in the dark is difficult – especially since there are a number of path splits that could lead to wrong turns. 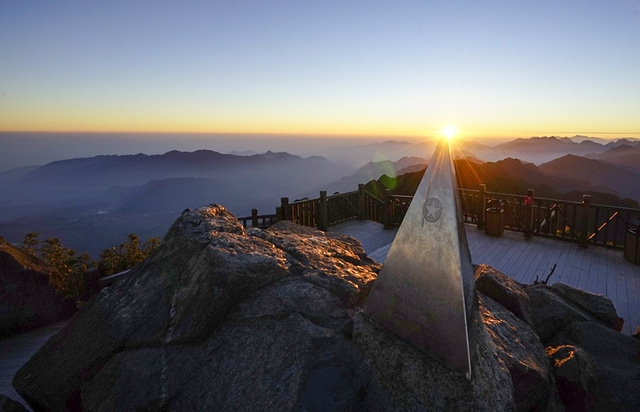 For those of you who want to scale a mountain without the exhaustion, take on Fansipan, Vietnam’s tallest mountain. 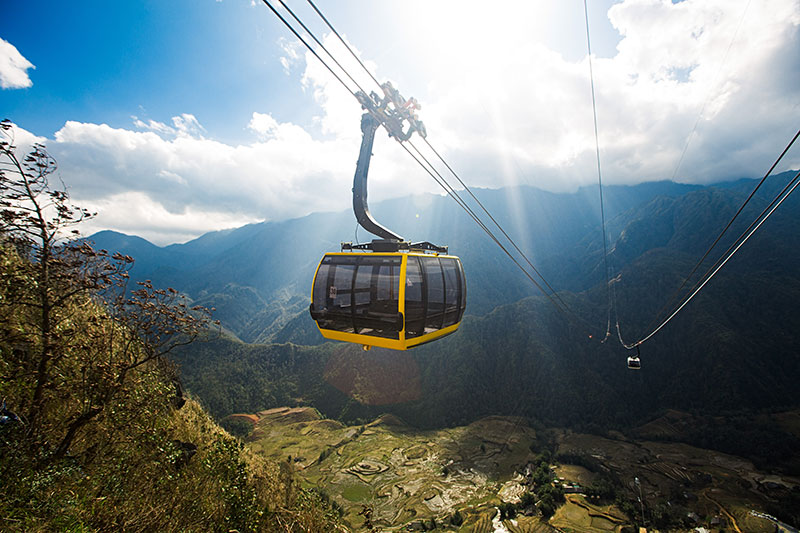 Image credit: Be My Guest

Because of the ease of accessibility, Fansipan has become rather crowded especially when hoards of tourists arrive by cable car.

So if you’d like a quiet view atop the mountain, go ahead and scale it by foot instead. It may be tougher and longer, but if you’ve got endurance to conquer rugged terrains and steep slopes, it’s definitely a rewarding journey. Simply hire a guide – who’ll usually be attached to an agency – to bring you around and you’re good to go!

Many may believe that photographing Mount Fuji from afar is sufficient enough of an experience as climbing it can be strenuous. But it’s definitely an experience to try at least once – the view of the sunrise on the summit is extremely rewarding, especially in less cloudy weather. 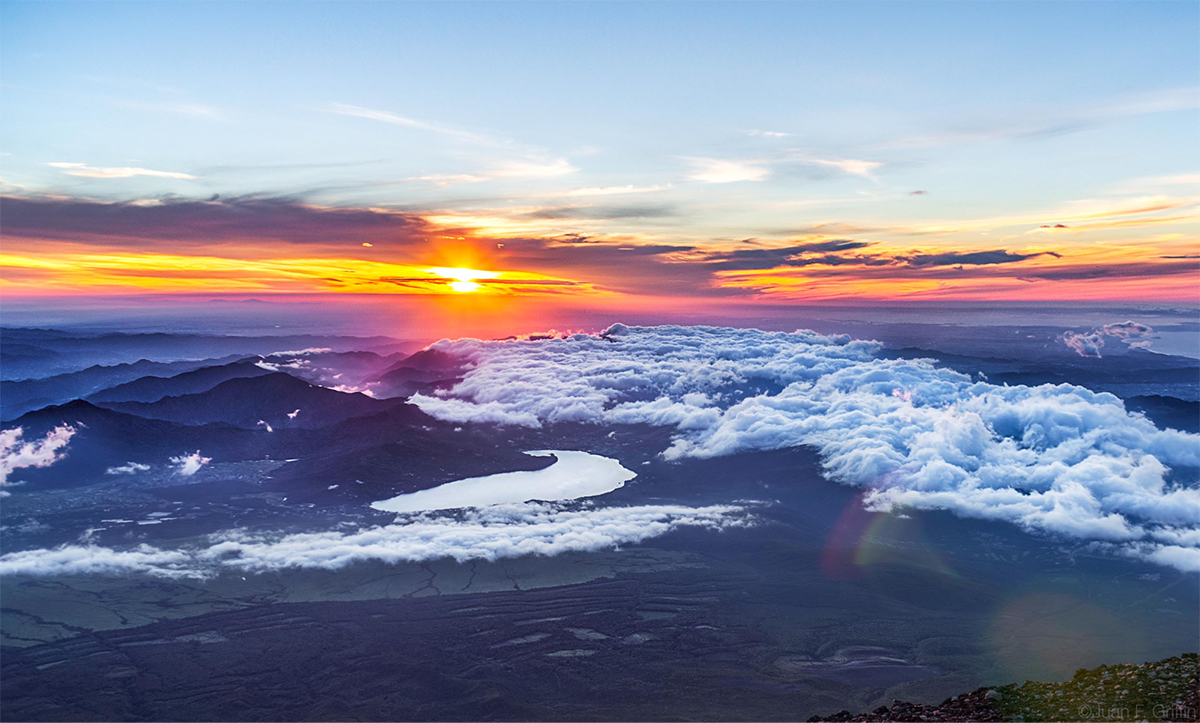 Mount Fuji has an official climbing season between July to September where trails and facilities will be open for climbers, with the Yoshida Trail being the most popular due to its accessibility. You won’t exactly need a guide since hoards of people will be attempting to conquer the mountain together and you can just follow them.

The mountain is divided into 10 stations – the 1st at the foot of the mountain and the 10th being the summit. If you’re planning to time your ascent in order to witness the sunrise from the summit, simply make it a 2D1N hike by spending the night at a mountain hut around the 7th or 8th station on the first day, before continuing to the summit early on the second day.

Each climber will also have to give 1000 yen (~S$12) at collection stations located at each trailhead to contribute back to villagers who live there. 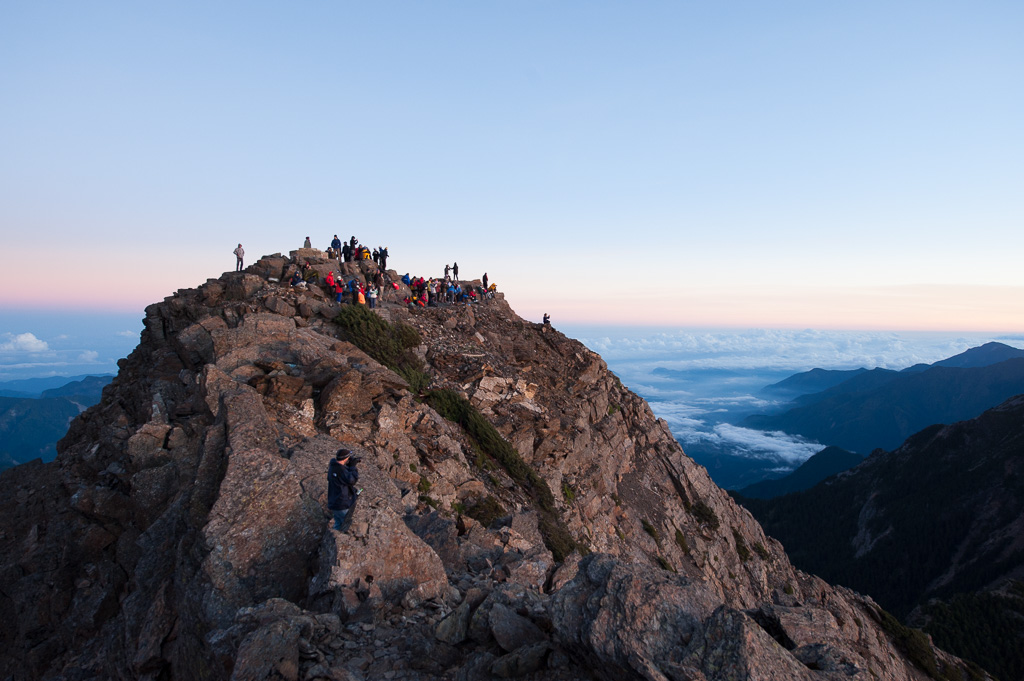 Being Taiwan’s tallest mountain makes Yushan the most popular climbing spot in the country amongst both locals and foreigners, so far so that you can only ensure a climbing permit if you make a booking 4 months in advance of your climb.

Yushan’s popularity also stems from its climber-friendliness – the standard hike takes two days, out of which 16 hours will be spent hiking. It isn’t that tough to conquer, especially with the great facilities in the nature park to assist your climb, from well laid out trails, maps, to even eco-toilets. 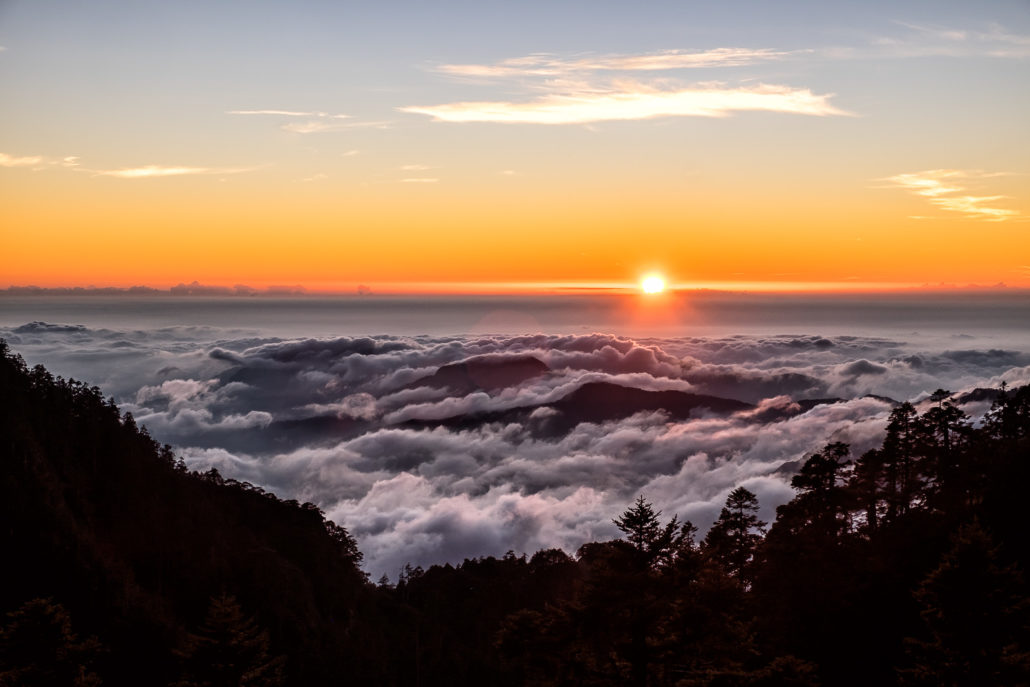 If you’ve got prior experience and are looking to push yourself, opt for their single day ascent instead. All you’ve got to do is provide photographic evidence of being on top of a recognised peak that’s above 3000m and you’re set.

From the peak, you’ll be greeted by a superb a sea of clouds, with various hill peaks poking out as if they’re islands above the clouds. If you’re in luck, you may even see the Pacific Ocean on the east. 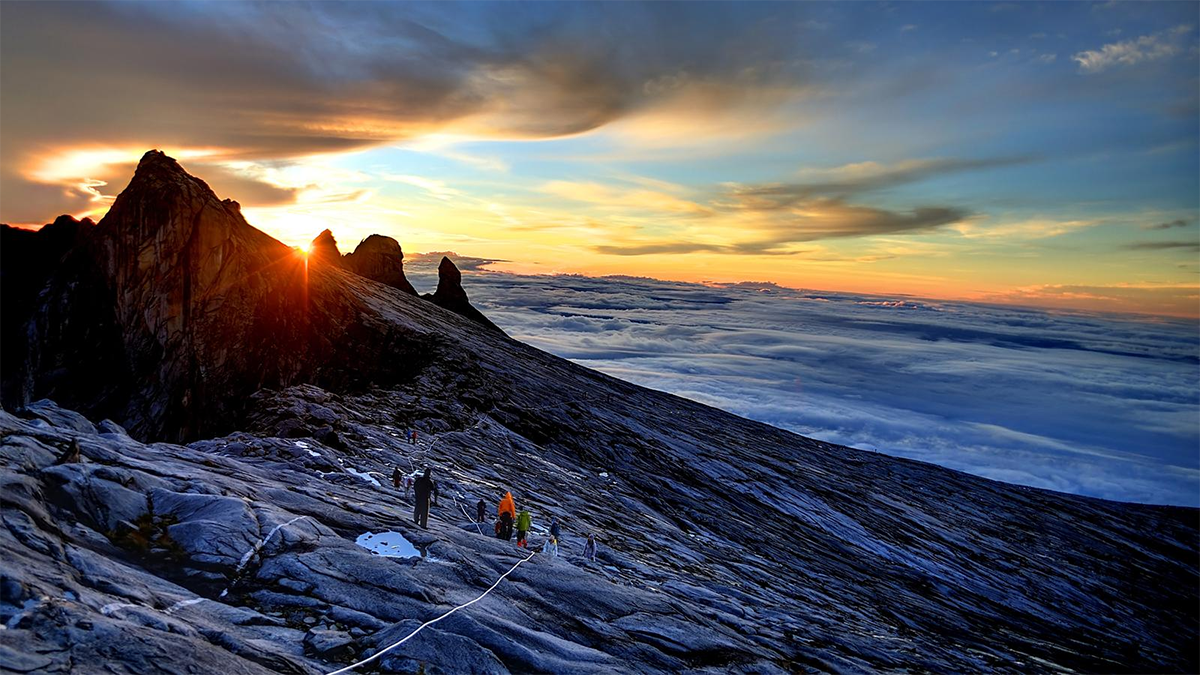 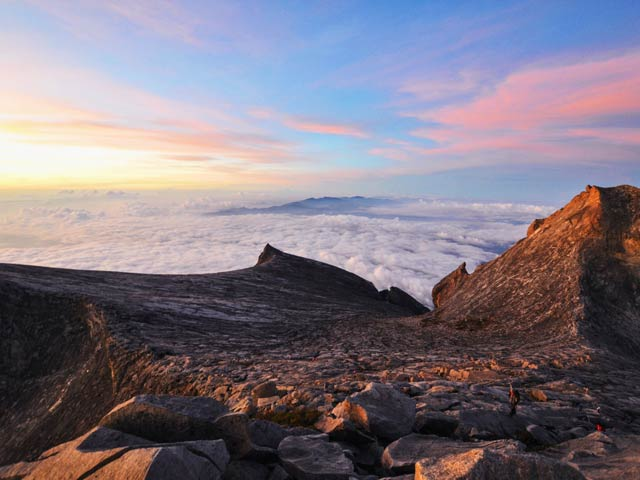 Despite resting at a height of 4,093m, the summit isn’t actually inaccessible – it’ll simply take a 2D1N hike for an average person to reach it. Yep, you won’t require special equipment or climbing expertise to scale this, just the usual hiking shoes and sticks.

Most importantly, remember to obtain climbing permits which you can book with various tour providers online. Make sure you snag yours within a month from your climb to avoid disappointment as there’s a limit each day!

The designated route for all climbers covers 8.72km – 6km on the first day and the final 2.72km on the next morning in hopes of catching the sunrise. And if all’s good, you’ll be rewarded with a horizon of clouds hovering over lush plantations. 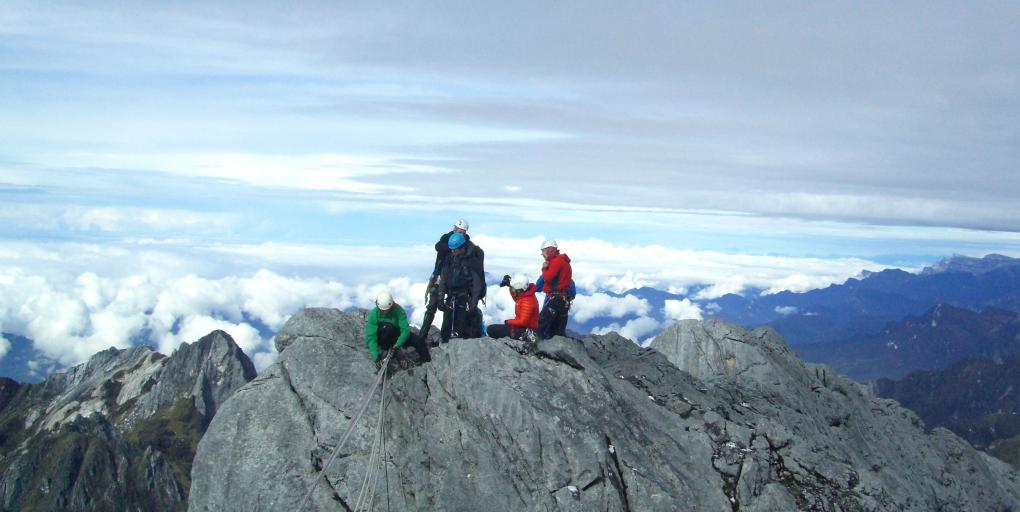 Of all the Seven Summits of the world – the highest mountains of each continent – Puncuk Jaya in Papua New Guinea is often regarded as the most technical of the bunch. With steep and granite walls alongside dense jungle treks, climbing should only be attempted by experienced mountain climbers.

Plus, Papua New Guinea has been facing political instability that has resulted in violence and kidnappings in the area, posing a greater threat to climbers. Trip itineraries may change depending on the political situation, so it’s difficult to guarantee that you’ll actually reach the summit. 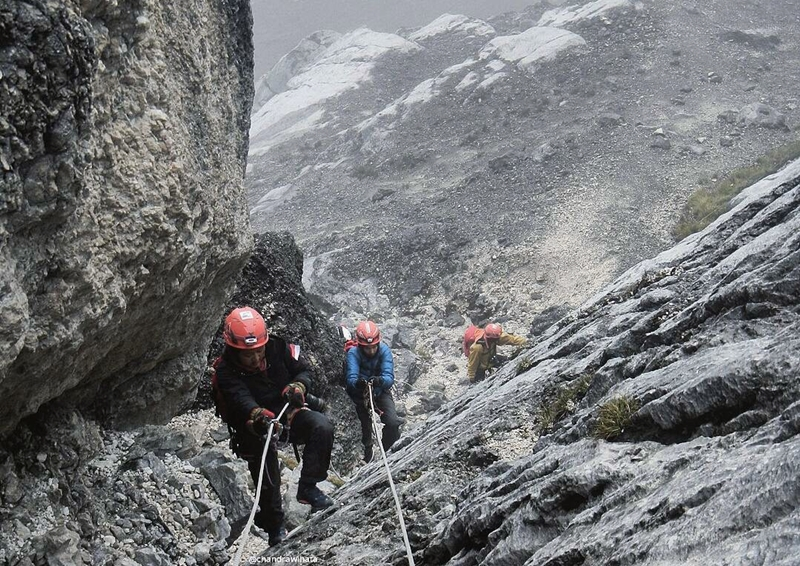 The expedition is estimated to take 3 weeks, and will cost about $25,000 due to the number of permits you’ll need to obtain it. To shorten your trip, you can opt for a helicopter ride instead of trekking through the dense jungles, but that’ll incur additional costs. 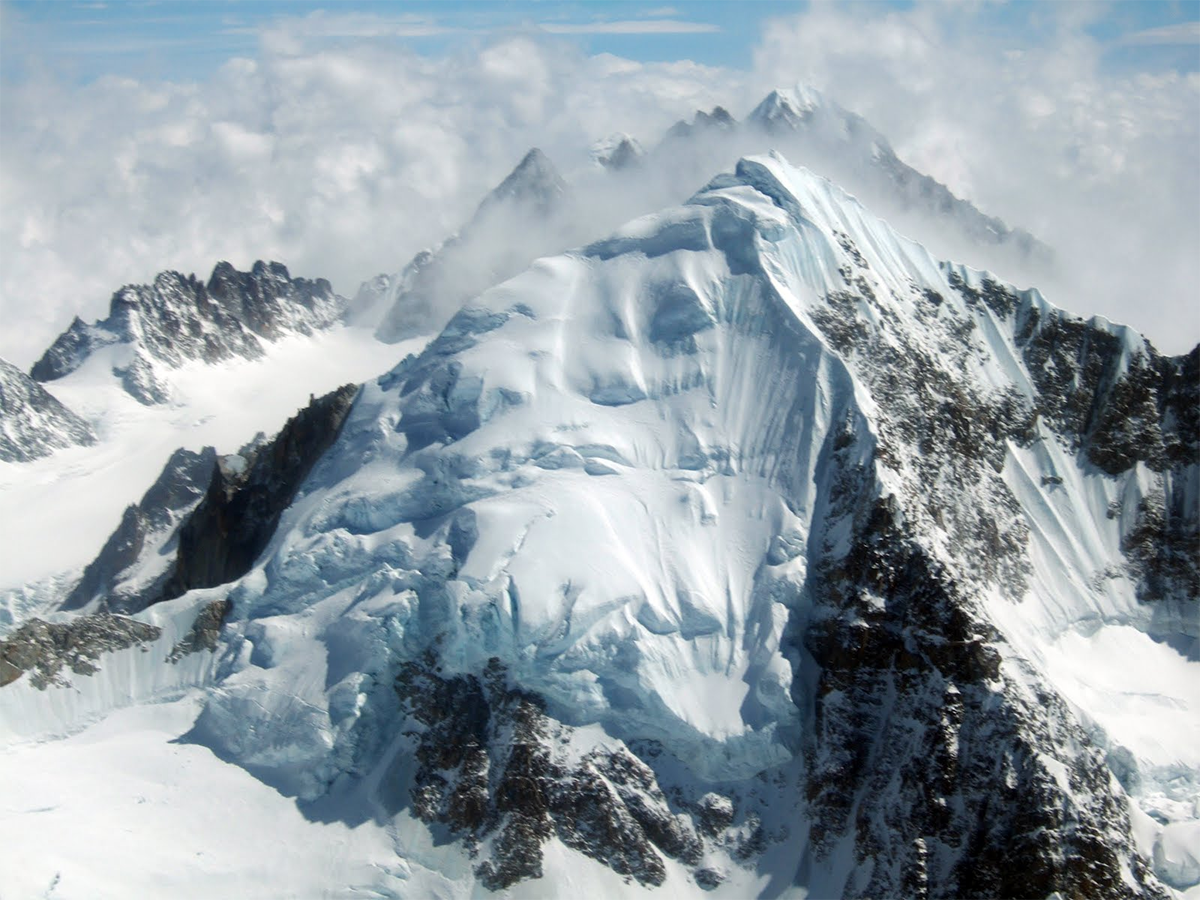 I’m sure we’ve all heard of the world’s tallest mountain, Mount Everest before. But Anti-Everest? Well, Hkakabo Razi in Myanmar actually owns that nickname. While it’s the tallest mountain in Southeast Asia, few have ever reached the summit due to the lack of infrastructure, guides, or porters to the mountain – the opposite of commercialised Mount Everest.

Getting to this jagged massif of black rock and white glaciers would require a two week trek through the dense jungles of northern Myanmar, which are inhabited by venomous snakes and plunging gorges that could pose a lethal threat in itself.

There are no guides to help you along in scaling to the summit, so you’ve got to be really experienced. However, if you’re just interested to trek to the base camp, you could arrange for a 2-3 week hike with tour agencies. 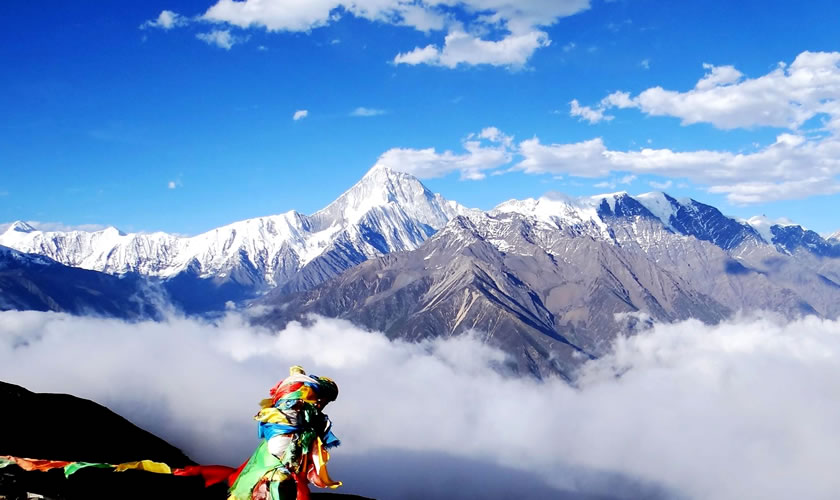 While Mount Everest may be the tallest mountain in China, it is a tad far from Singapore. Mount Gongga, being in Sichuan, is slightly more accessible – it’s within a 1 day’s drive from Chengdu. However, it isn’t any easier to climb. In fact, Mount Gongga is regarded as more dangerous than Everest and has only been climbed 8 times. 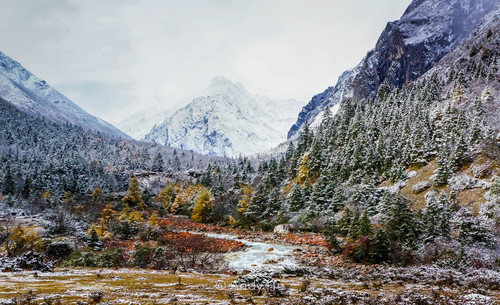 Don’t worry if you’re not a hiking pro though, there’s an easier alternative trek to a height of 4900m which lasts over a week. Locals often take the same route as part of a Buddhist pilgrimage, so you can be sure that it isn’t too strenuous.

All you’ve got to do is book yourself a tour with a tour agency and you’ll get the rare experience of learning about Tibetan culture through living in villages while disconnecting from the world.

With 10 nearby mountains that range across all levels of climbing experience, you are now able to kick off your journey to being the next Bear Grylls. Plus, you’ll not only have the rights to brag that you’ve conquered a legit mountain, but that you’ve conquered the highest mountain in the country. That’s a pretty sick accomplishment, if you ask me.

VivoCity's GSS Has 1-For-1 Shopping & Dining Deals To Mobilise Your BFF For
My Money @ Campus - A Series Of Carnivals That Gets You Financially-Savvy With Free...