2020 has been a tough year, with a global pandemic and recession in full swing. Yet, Singaporeans have managed to keep our spirits up by continuing to observe our own customs and festivities. Beyond proudly displaying the country’s flag for National Day, there are HDB corridor traditions unique to specific cultures.

These include adorning one’s home exterior with decorations during special occasions, or everyday symbols to showcase the faith and beliefs of those within the household. Keep this list of origins and meanings behind common HDB corridor traditions in Singapore handy next time you take a stroll along your block, checking out what your neighbours have on display. 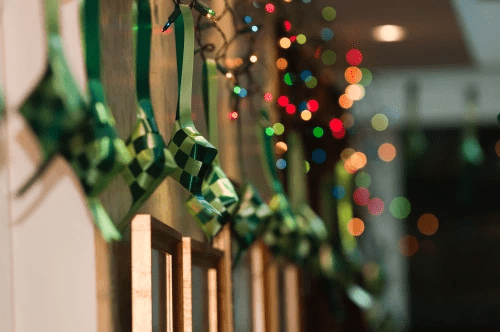 Ketupat are rice dumplings wrapped in palm leaves, woven into the shape of a diamond. In the olden days, they were hung out to dry after cooking and wrapping. They can now be either purchased ready-made or home cooked then stored in the fridge, yet the cultural practice of hanging ketupat-shaped decorations during Ramadan season has remained.

The criss-cross weaving of the palm leaves is said to symbolise the sins committed by human beings, with the white rice within representing one’s purity and liberation from past mistakes after observing the fasting, prayers and rituals of Ramadan. Hence, ketupat serve as a symbol of admitting one’s mistakes and asking for forgiveness, as part of Hari Raya tradition. 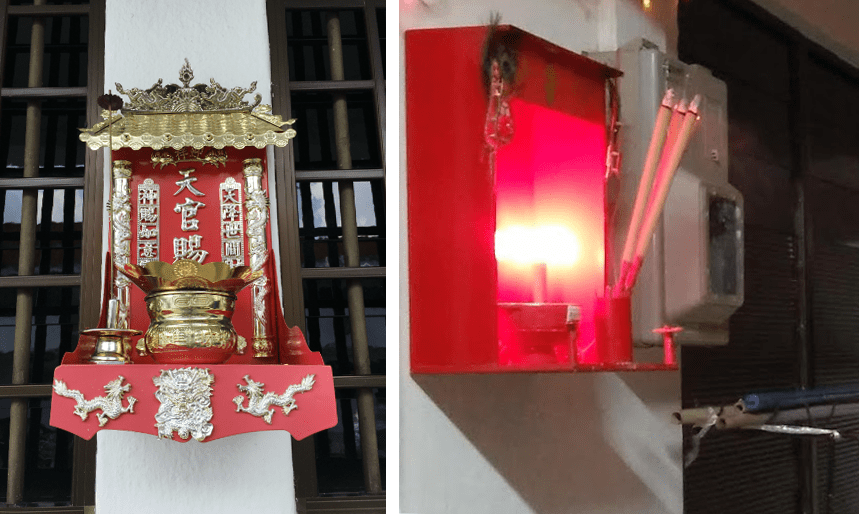 Many Buddhist and Taoist households have a dedicated altar at home to perform regular prayers to statuettes of the various gods, but you may have noticed a smaller-scale wall altar attached outside some units. These are erected to pray to Tian Gong, a Taoist deity also known as the Ruler of Heaven, and the altar needs to be placed outdoors and facing the sky.

Myths describe Tian Gong as the monarch of all deities in heaven, and those of Buddhist and Taoist faith pray to him for everyday blessings as well as divine protection from the demons and evil spirits in the world. 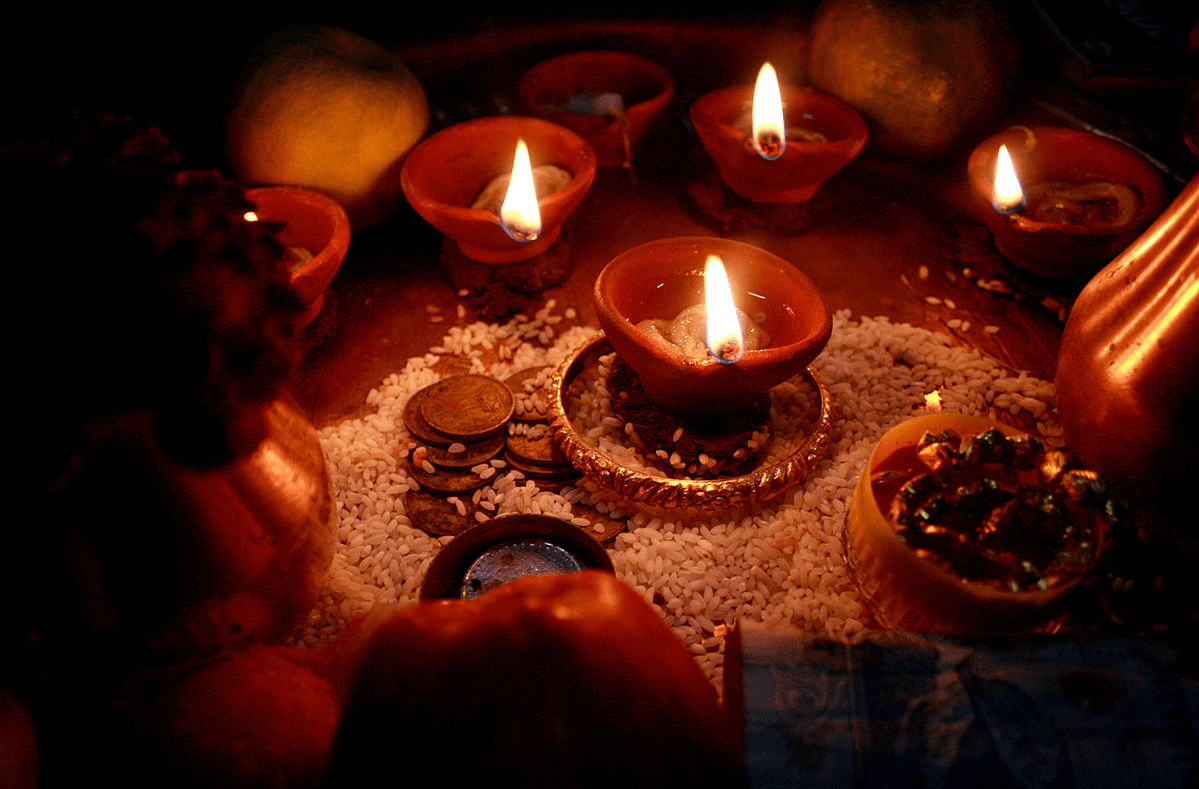 You may have thought they were regular candles along a corridor, but these little oil lamps commonly displayed during Deepavali are actually called diya. The receptacles are crafted from clay, and filled with either ghee or vegetable oil to contain a lit cotton wick. Simple in essence, they form quite the marvellous sight when lined up to illuminate the space.

Deepavali is also known as the Festival of Lights. And in Sanskrit, “deep” refers to diya while “avali” means a row of. Hence, decorating the outside of one’s home during Deepavali has become an age-old ritual signifying wisdom and enlightenment. It also reinforces the meaning behind Deepavali itself, celebrating the triumph of good over evil, and light over darkness. 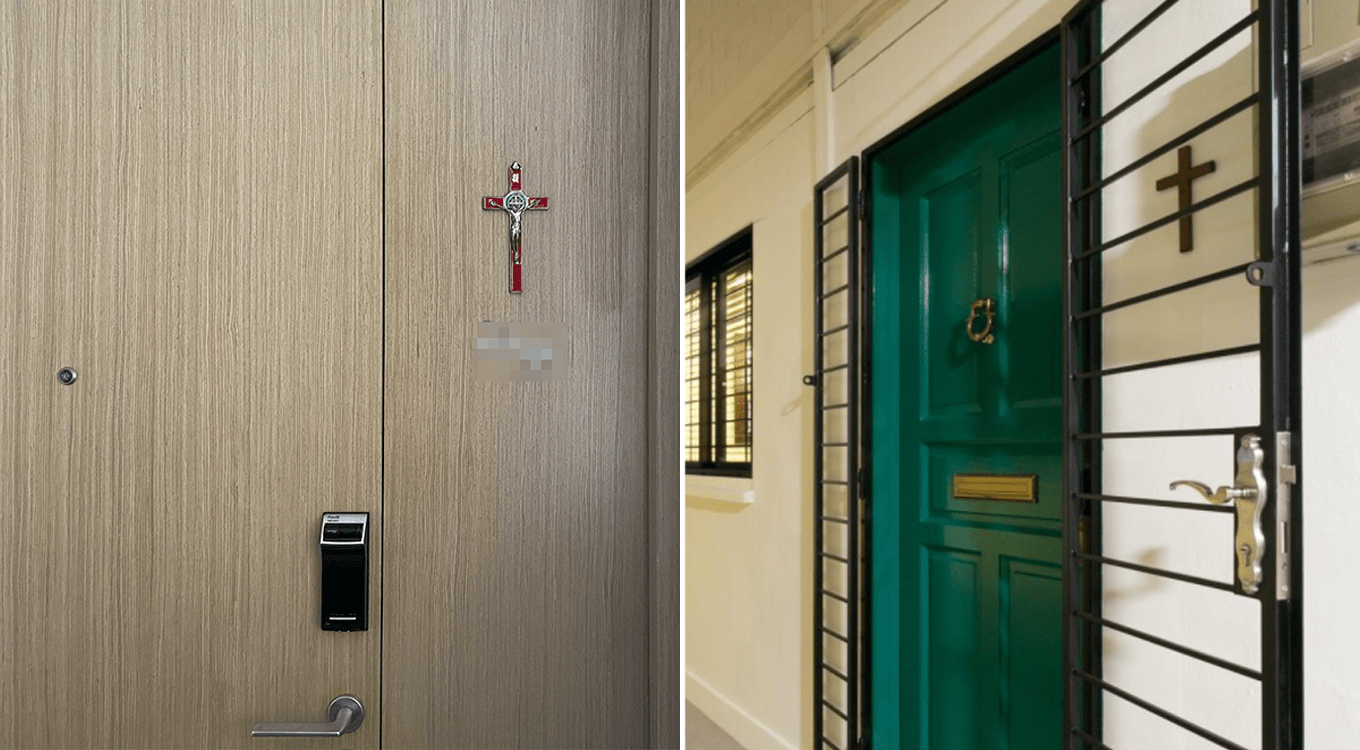 The Christian cross is a universally recognisable symbol, not just at church but on everyday items such as jewellery and even stationery logos. As the symbol of the religion, it serves as a reminder of Jesus Christ’s crucifixion, passion, and sacrifice of death for the sins of the world.

When attached at the entrance of one’s home, the simple but powerful symbol proclaims the Christian worship of those residing within, and grants protection of the household. Little-known fact for those not of Christian faith: a cross with Jesus Christ on it usually represents Catholicism. 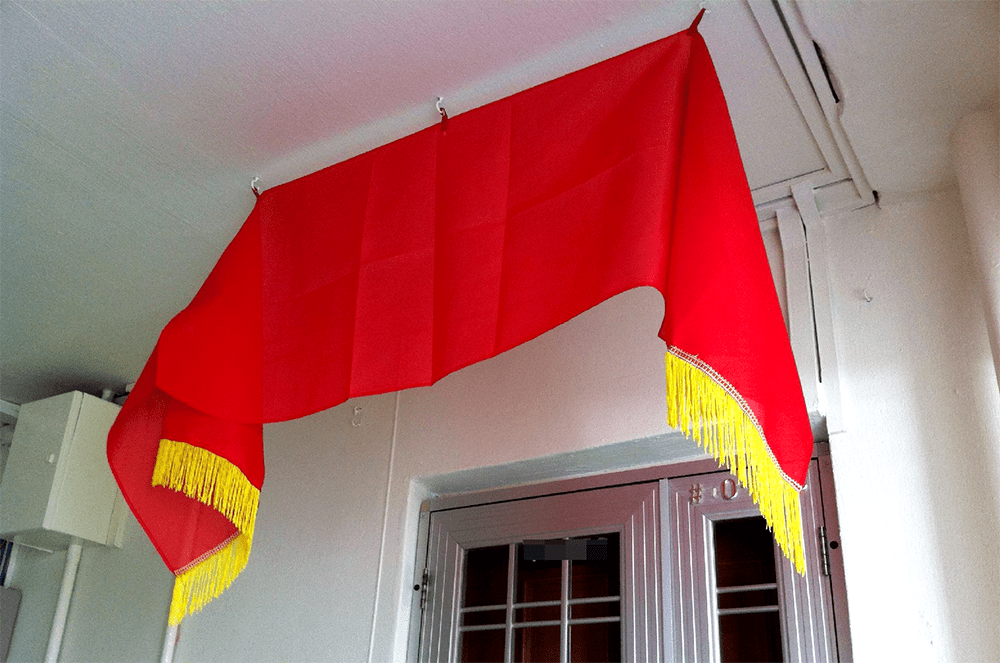 It’s no secret that Chinese folks deem red to be an incredibly auspicious colour, displaying crimson decor as far as the eye can see every Lunar New Year period. A red banner – or Ang Cai in Hokkien – can be draped outside one’s home beyond Lunar New Year, marking all sorts of special occasions or fresh beginnings.

These include moving into a new home, the matrimonial union for newlywed couples, and even birthdays of a household member to celebrate a new chapter of his or her life. The bright red banner is said to usher happiness, luck and wealth into the direction of one’s home. 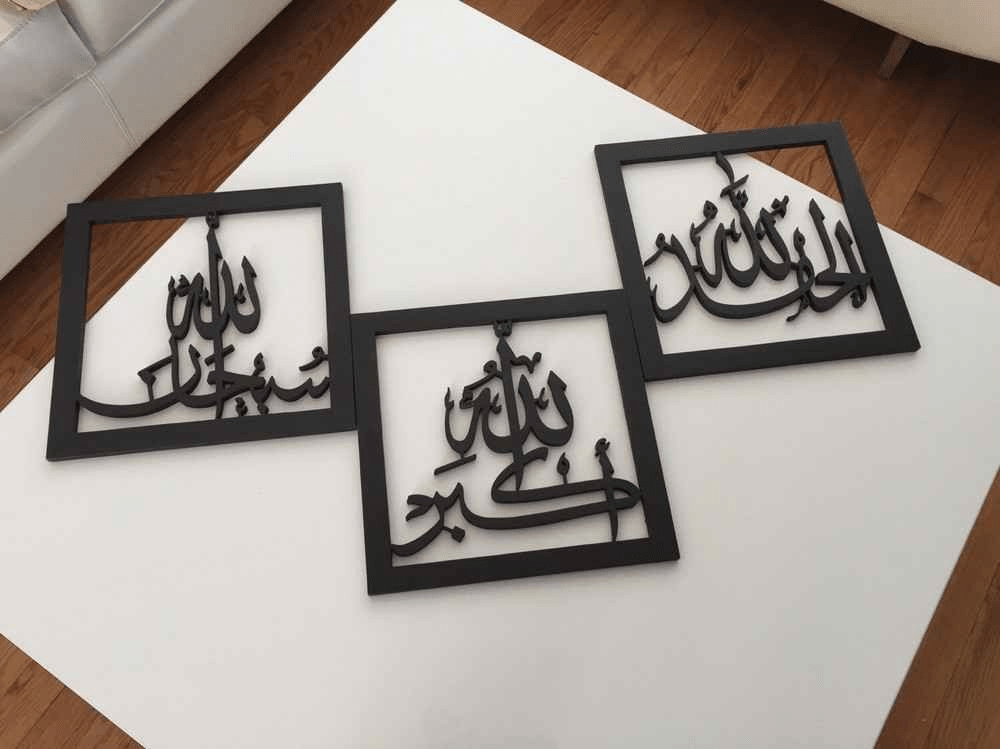 Muslim households commonly display banners with phrases from the Quran, inscribed in beautiful and intricate Arabic writing. They serve as a reminder of Islamic teachings, and it is also believed that having it in the household will grant Allah’s blessings and protection from demons or black magic.

On top of full-length quotes, there are also decoration pieces which offer a more modern and minimalistic take of displaying one’s Islamic faith. These condensed displays could spell out meaningful phrases such as “Alhamdullilah”, which translates to “praise be to God”, or “Inshallah”, meaning “God willing/if God wills it”. 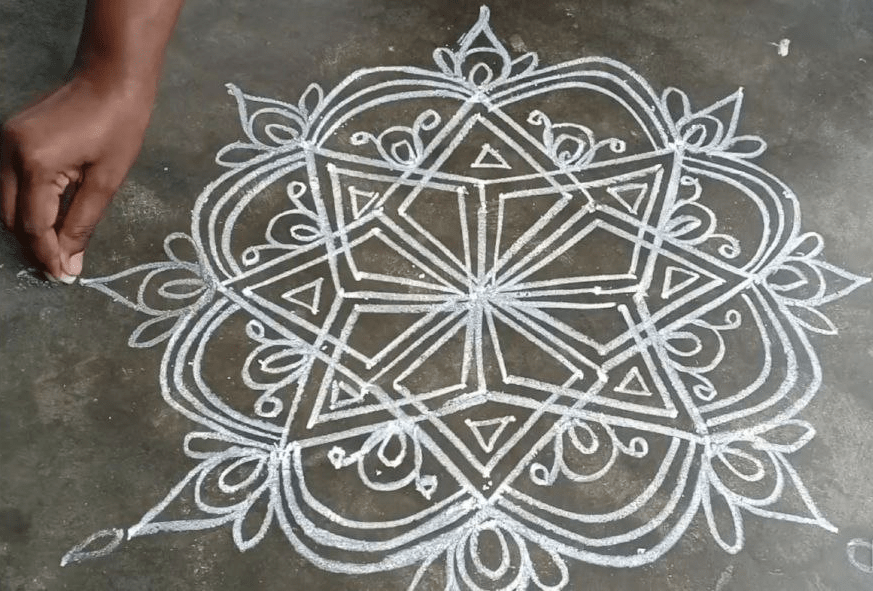 Before chalk was adopted in modern times, kolams were drawn using coarse rice flour. This attracted ants, birds and other wild creatures to stop by for a nibble, rendering the kolam a sign of invitation to welcome visitors to the home. This was done in the hopes that the Hindu Goddess of Prosperity, Lakshmi, would swing by as well.

Apart from the belief that it directs prosperity straight to your home, folklore also states that kolam lines have to be carefully etched to ensure completeness and no open gaps. This symbolism prevents evil spirits from slipping through and entering the kolam shapes, thus keeping bad fortune from weaselling into the household as well.

8. Rangoli – welcoming Hindu gods into the home for good fortune 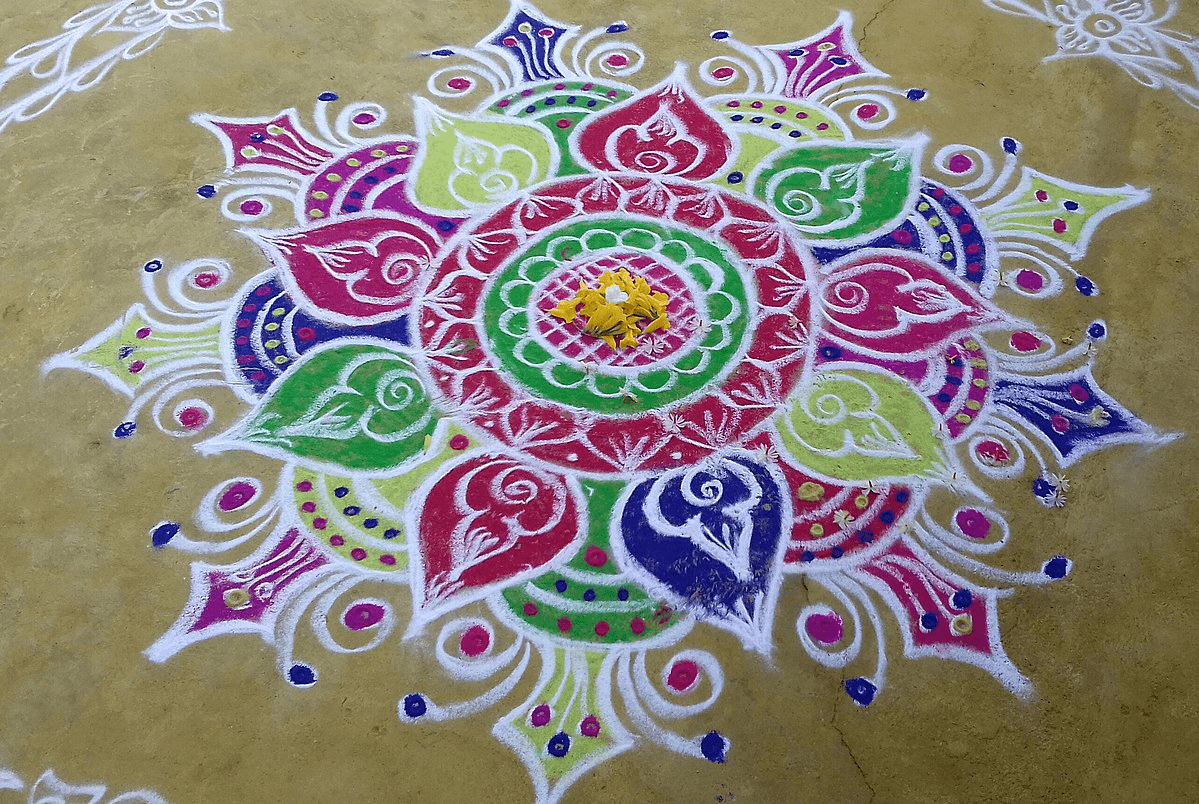 A colourful and more upgraded version of chalk kolam that you’d see during Hindu festivals such as Deepavali, rangoli patterns are created on the ground outside of one’s home using coloured rice, sand, red brick powder or flower petals. The designs can consist of geometric shapes, delicate petal drawings, and even detailed deity impressions.

Hindu women meticulously craft the patterns either at the entrance or the sidewalk lining their home, with the belief that it will welcome Hindu gods into the abode and bring fortune and protection. A wholesome family activity, this skill is usually passed down to daughters to ensure that the tradition continues throughout generations.

One uniquely Singaporean aspect of daily life not to be taken for granted is our cultural diversity. Even a quick stroll through our HDB block is able to reveal the multifaceted nature of life in Singapore, in terms of racial and religious expression.

In order to understand and appreciate the many different traditions a little bit better, we can also attend celebratory events of various cultures, not just our own. The Little India Shopkeepers & Heritage Association (LiSHA) is organising a string of festivities to celebrate Deepavali 2020, a.k.a the Festival of Lights. 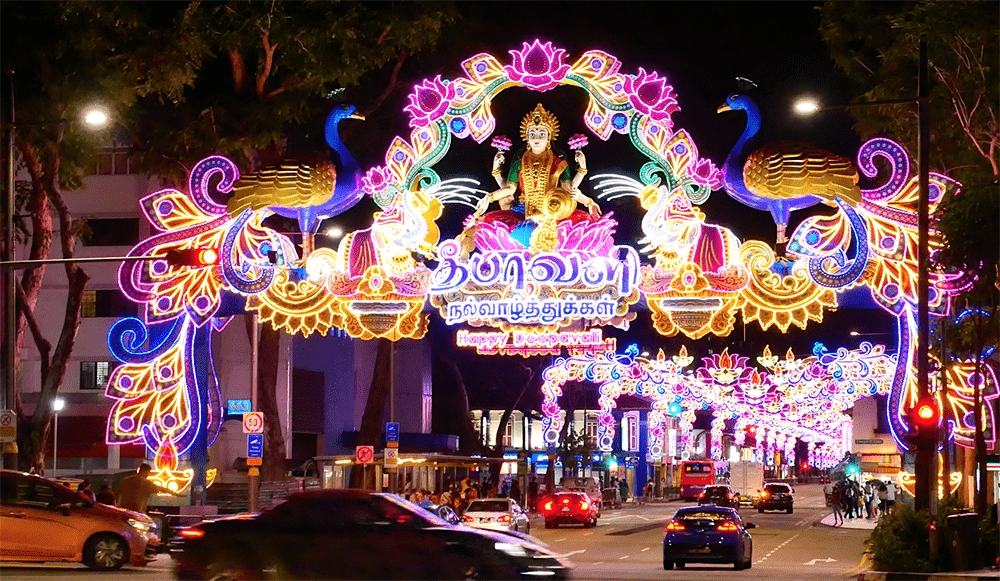 A dazzling light display will take place from now till 6th December 2020, illuminating the stretch along Serangoon Road and Race Course Road every night between 7PM-12AM. The magnificent “Grandeur Lights of Deepavali” display serves as a highly Instagrammable photo op. 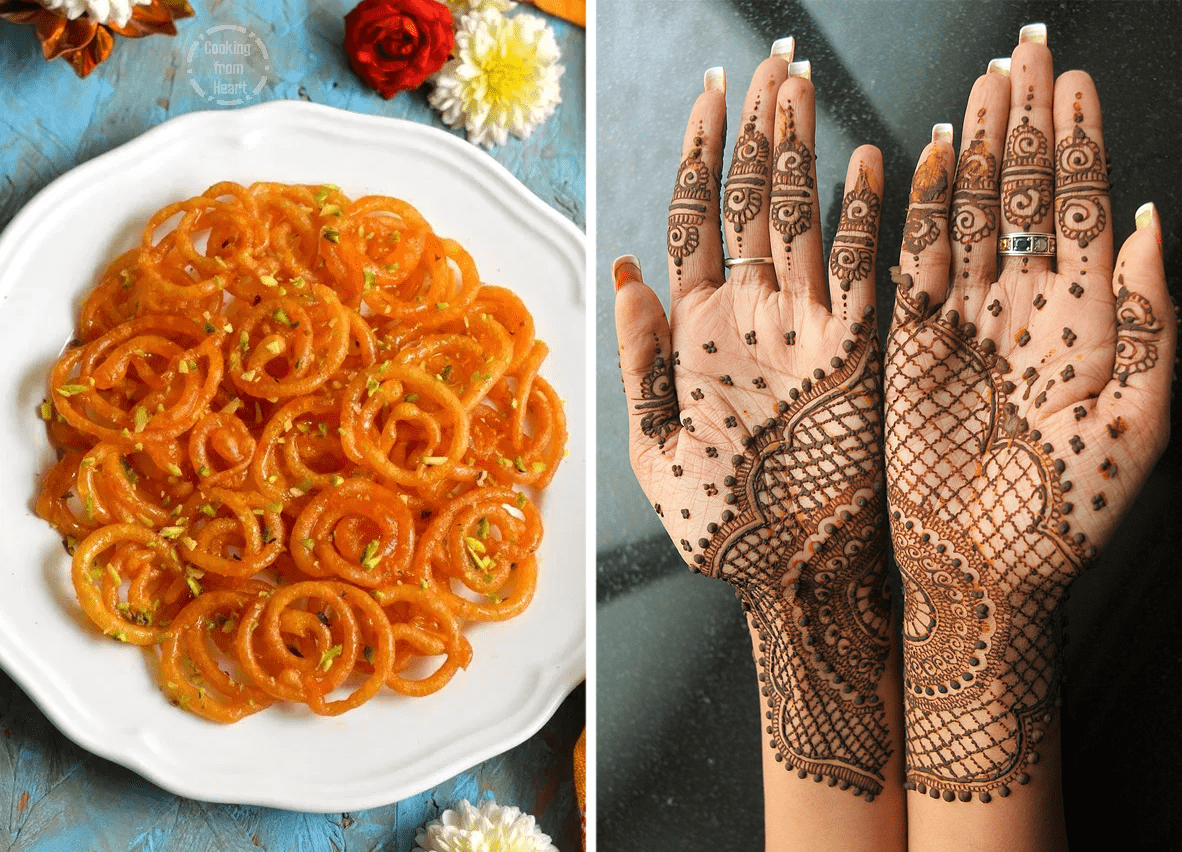 There’ll also be virtual workshops where you can try your hand at drawing your own rangoli or henna, or go through a cooking demonstration of beloved Indian cuisine including traditional delicacies and sweet treats. After learning the ropes via online workshops, participants can submit their own rangoli, henna or cooking creation through videos as part of a giveaway.

If you prefer to just indulge in good food instead of cooking your own, swing by the participating restaurants along Little India to partake in a Deepavali Gastronomy programme from 14th October to 22nd November. You’ll get to feast on authentic Indian dishes prepared with love, including speciality dishes hard to find elsewhere.

You can also take part in a live storytelling session at 7PM on 7th November, where a colourful Dheebam virtual drama will be shared. Feast your eyes on intricate costumes, larger-than-life props, eye-catching dance choreographies and even an interactive element between the performers and the virtual audience.

Stay tuned for several months of free-to-participate special events to celebrate the Festival of Lights!

Find out more about the Deepavali Celebrations 2020 by LiSHA here

This post was brought to you by Singapore Tourism Board.
Cover image adapted from (clockwise): Wikipedia Commons, Kusu Island, Qanvast, Geomancy.net 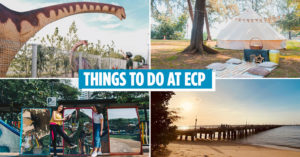 East Coast Park: A Guide To Singapore’s Most Popular Park In The East
iQIYI The Creators Of YanXi Palace Have Over 3,000 Titles For You To Binge-Watch 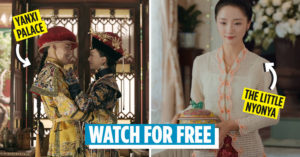