Crazy Rich Asians on a budget 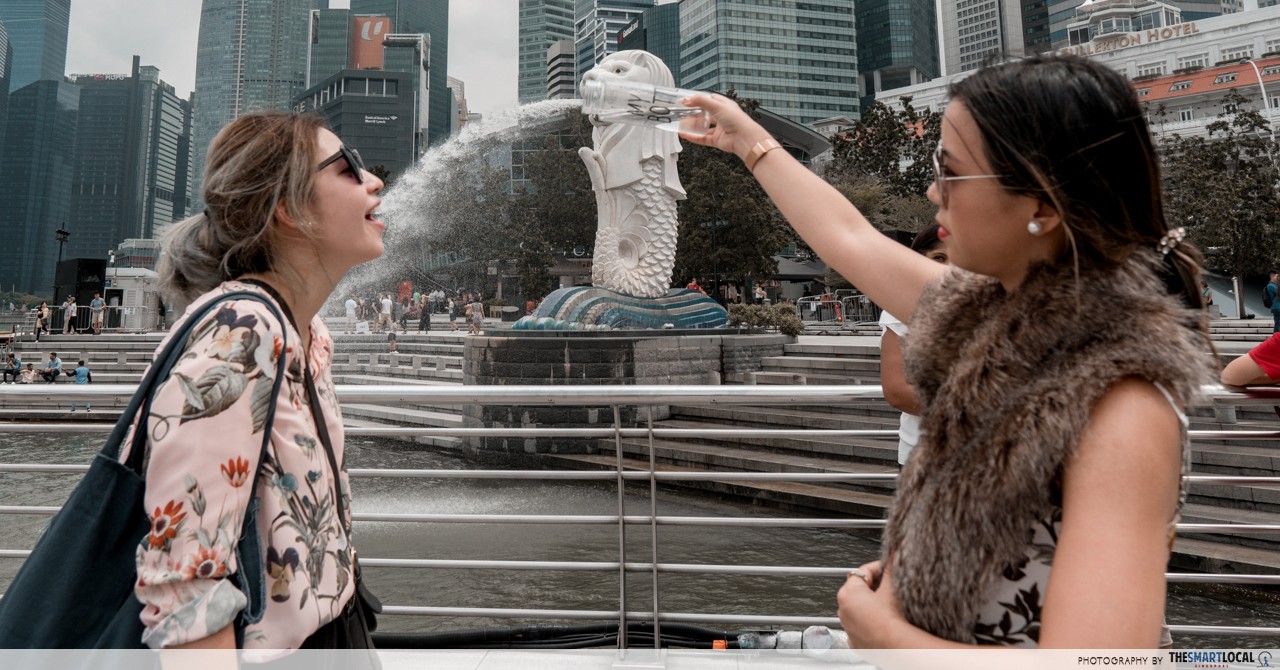 Let’s say you’ve got one day to spare in Singapore – nothing more, nothing less. Of course you’d wanna live it up Crazy Rich Asians-style – especially if you’re visiting because of the movie. And that’s exactly what we did, from feasting at Changi Airport’s secret staff canteen to enjoying live music at a container bistro.

It doesn’t matter if you’re a first-time tourist or a jaded local, here’s how you can reenact the Crazy Rich Asian life under $50: 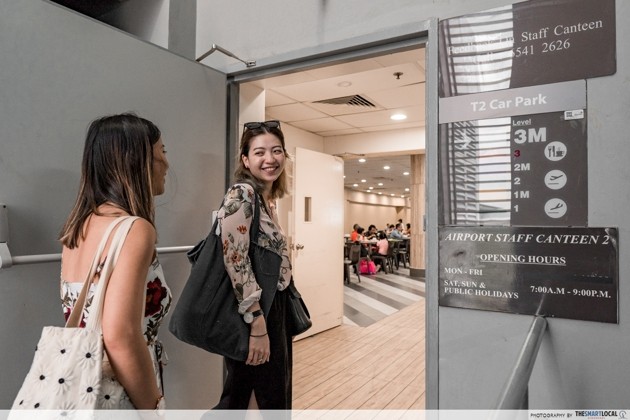 Many of us smuggle in sandwiches into our flights – perhaps because we’re flying budget, or because airport food prices are ridiculously inflated. But you won’t find exorbitant prices at Changi Airport’s secret staff canteen. 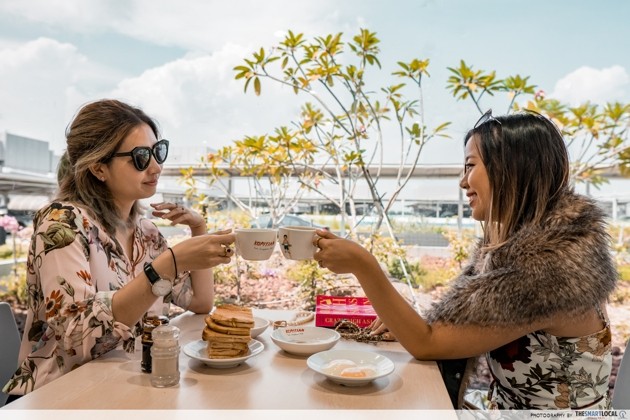 Much like how Rachel walked through Changi Airport in a state of wondrous awe, our eyes lit up with amazement when we saw the wide selection of local food at the staff canteen. The feeling was mutual: plenty of airport staff were staring at us and our blinged-out rings and fur shawl. 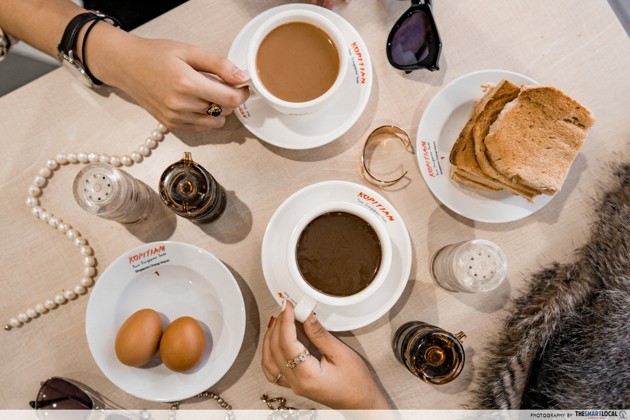 We went for a a Kaya Toast Set ($2.50) – a classic Singaporean breakfast dish – which comes with tea/coffee, a stack of buttered kaya toast, and half-boiled eggs. 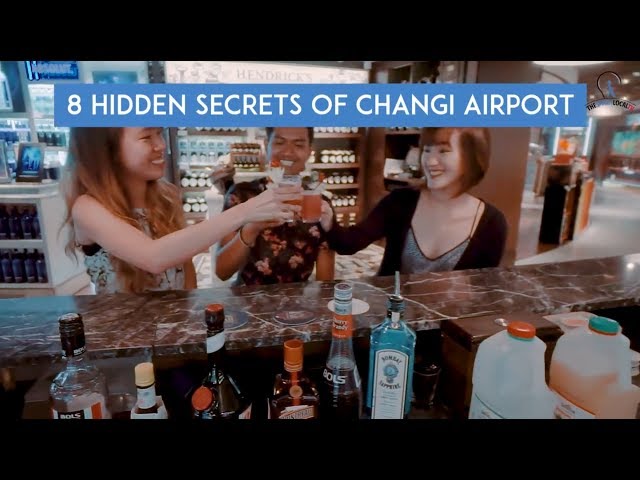 10AM-10.30AM: Soak in the beauty of Changi Airport’s gardens 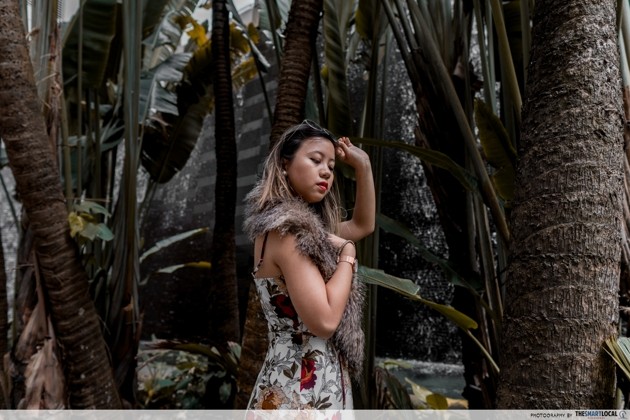 Changi Airport has a surprising number of nature spots where you can relax, and the famed Butterfly Garden is just one of many.

We were simply strolling towards the MRT when we saw the Sunken Garden, and practically squealed for excitement when we realised it had leafy fronds and a gushing waterfall. It was the perfect spot to channel a lost in the woods but with nice clothes aesthetic – that is, if you clamber barefooted over a rock to make it to the “island” in the middle. 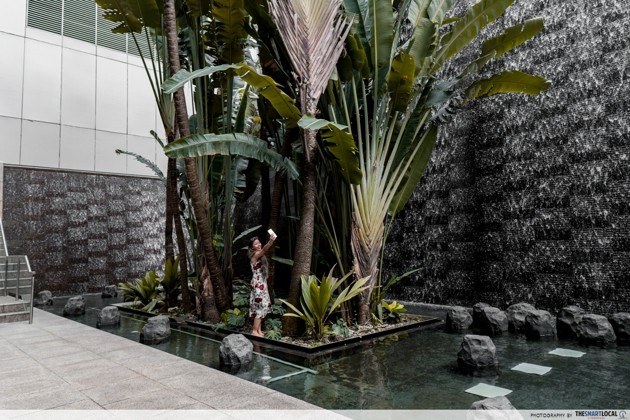 From the Sunken Garden, just head down the series of escalators and you’ll find yourself at Changi Airport MRT Station. No chauffeurs or limos for us when we’re on a budget!

You’ll need to get an EZ-Link Card, which you can get for $12 – it comes with $7 stored value. Take the MRT towards Raffles Place MRT – it’s a long ride, so settle in with a good book. Ahem, of course, we recommend Crazy Rich Asians, if you haven’t read it yet.

11.30AM-12PM: Stroll to the Merlion Park for the iconic tourist shot

Once you’ve reached Raffles Place MRT, head over to Exit H. When you see the river, follow it all the way through and you’ll eventually find yourself at the Merlion Park. There’ll be plenty of tourists here, so angle your way through for a good spot and do what we did: 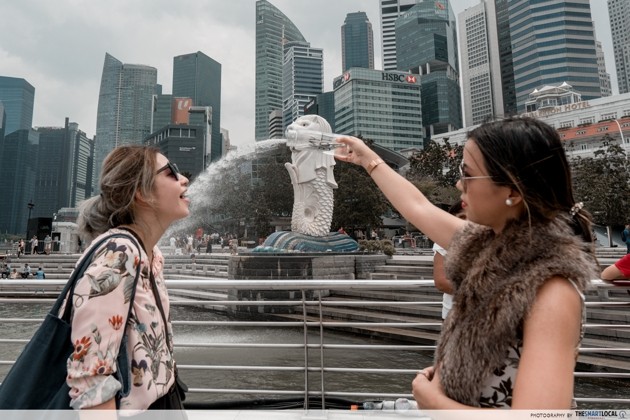 Drink the water straight out of the Merlion’s mouth! We also made our way to the stepped plazas at Queen Elizabeth Walk where Rachel and Nick had their heart-to-heart chat: 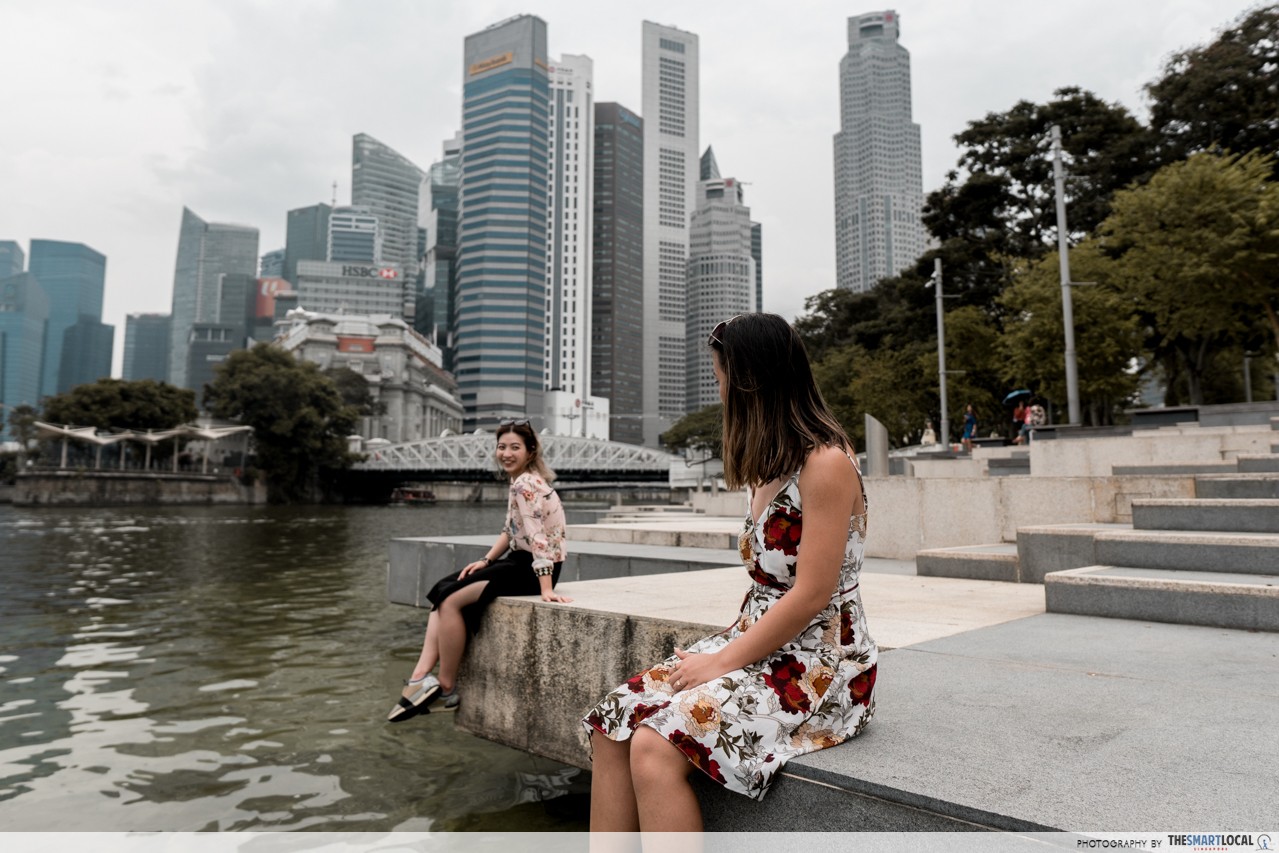 But in reality, the water was disturbingly green and murky. 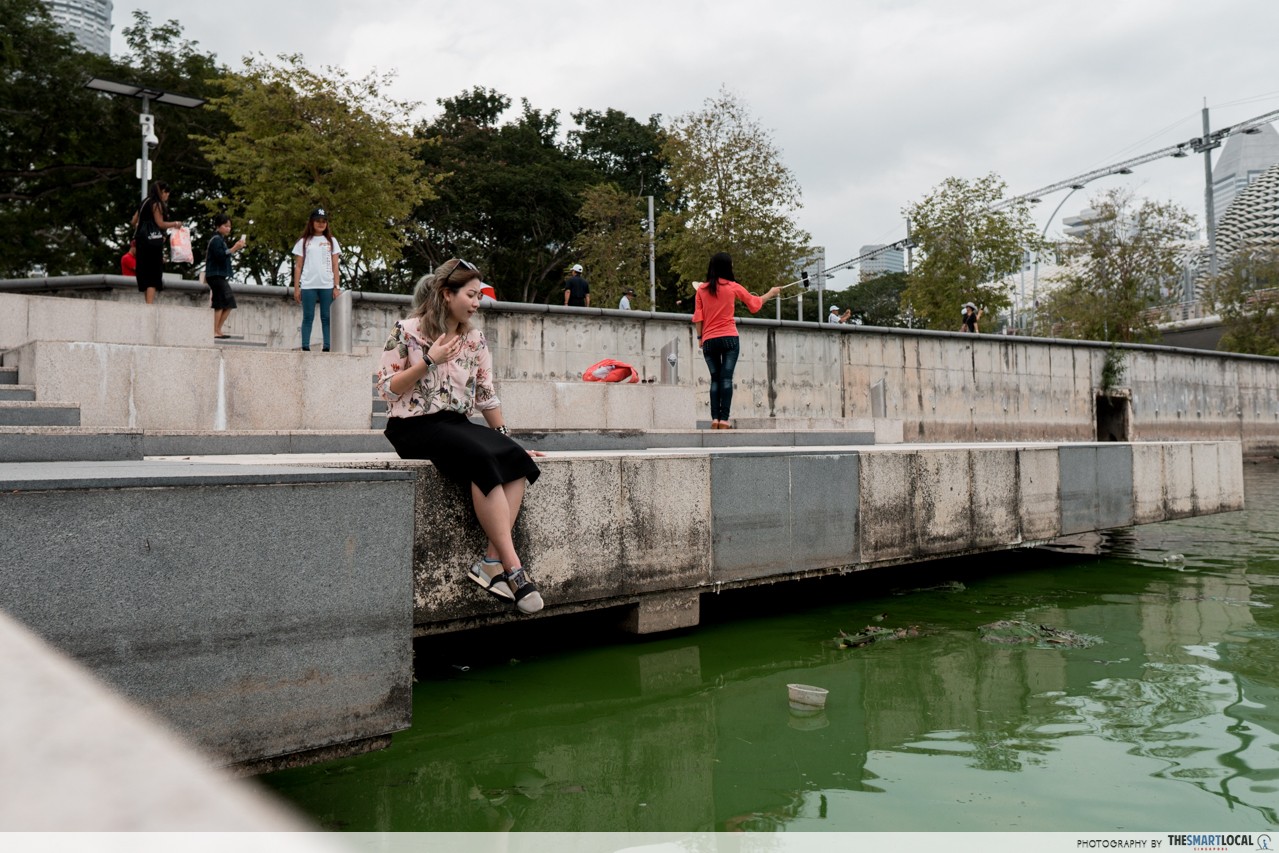 We continued on to CHIJMES from here, ducking into the National Gallery Singapore briefly for a toilet break and some aircon relief. We know CHIJMES for the jaw-dropping wedding scene in Crazy Rich Asians when Araminta strolled down the aisle – an aisle that was covered with green fronds and had an actual river trickling down. 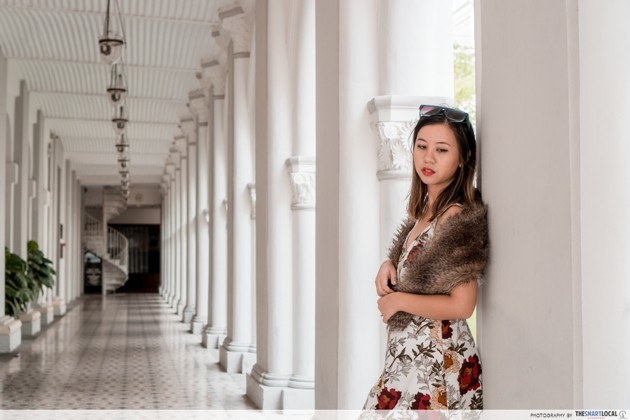 We did nothing of the like here. But with Gothic-style corridors and open courtyards? It was a trip well-spent, since we took plenty of shots to remember our Crazy Rich Asian-inspired day in Singapore. Heads up: photography isn’t typically allowed at CHIJMES Hall unless you pay a premium, but feel free to snap away outdoors – you can find out more about their photography guidelines here.

By this time, we were starving – as tasty as the Kaya Toast Breakfast was, a few slices of bread and eggs won’t fill your stomach for long. And where else would we go, but straight to Newton Food Centre for some hawker fare? 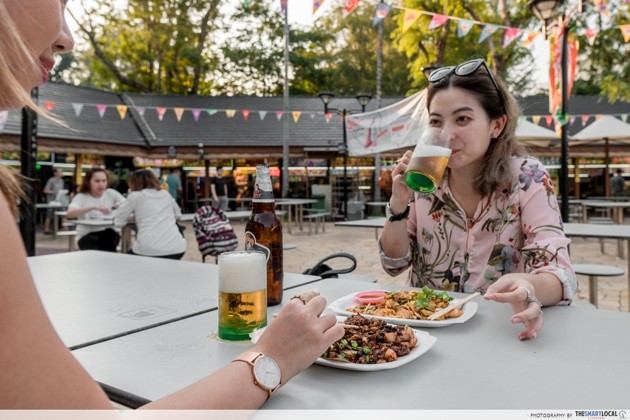 With our stomachs growling and legs aching, we headed over to Newton Food Centre to load up on our carbs. In the movie, they ordered a staggering amount of food but there was no way we would’ve been able to finish satay, laksa, chilli crab, carrot cake, and more in one sitting. Instead, we settled for Black Carrot Cake ($3) and Oyster Omelette ($6).  And with Tiger Beer going at the affordable price of $7 for a 500ml bottle, we got slightly carried away… 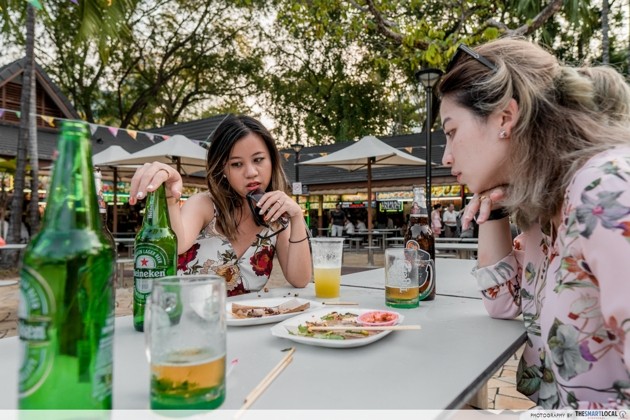 Jokes, we got just the 1 bottle and shared.

From Newton MRT, take the Downtown Line all the way to Bayfront MRT. It’s about a 15-minute walk to Gardens by the Bay. Araminta and Colin’s wedding was a beaut. Not that we could replicate that, because throwing a wedding like that at Gardens by the Bay is no easy feat. But we went anyway, to stroll through the grounds of The Supertree Grove.

To our horror, it was a scorching hot day. The Supertree Grove, no matter how stunning, did remarkably little to shade us from the sun. Bring sunscreen, an umbrella, or cap – whatever you can get your hands on to escape the heat. In our case, we briefly toyed with the idea of using our trusty fur shawl but nah, that didn’t work at all. Using fur to hide from the sun – not recommended.

It might be a better idea to go at night to watch Garden Rhapsody – a free light and music show that runs daily (7.45PM, 8.45PM). 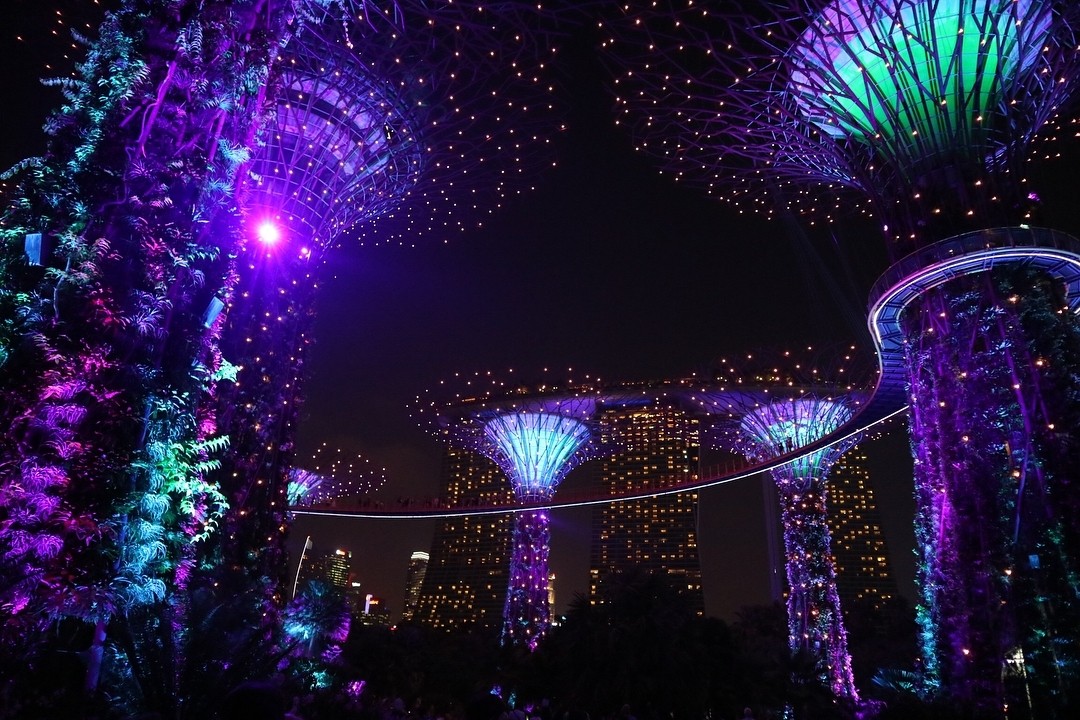 All that time in the sun had us feeling mildly delirious. We needed food and aircon, and we needed it quick. But we were more than willing to travel for good food, so off to Timbre+ we went, a container bistro that’s just a few minutes walk away from one-north MRT.

6.30PM-8PM: Have dinner while enjoying live music at Timbre+ Container ships for partygoers isn’t exactly a thing in Singapore, but container bistros? We’ve got plenty, from Timbre+ to the ones at Punggol-Serangoon Reservoir. 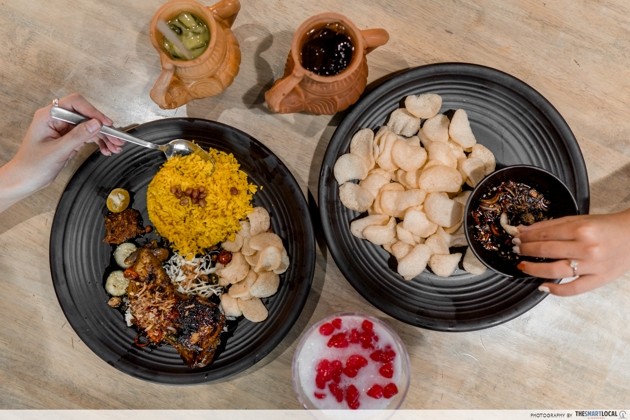 There’s a wide selection of food at Timbre+ but we found ourselves constantly wandering back to this Indo-grill joint called Warung K. And we’re glad we did: their Chicken Leg Bakar ($7.90) came with fluffy saffron rice and a charcoal-grilled drumstick – tender with a flavourful marinade. But for those not familiar with the spiciness of sambal, be warned! Alas, we had to return our own trays. Timbre+ has this tray return policy where you’ll get $1 back for every tray returned – you’re already charged for it at the food stalls, so make sure you get your money back.

Every dollar matters when you’re on a $50 budget.

And that brings an end to our day as Crazy Rich Asians in Singapore – with $3.10 left. Not too shabby, considering we visited attractions like Gardens by the Bay and CHIJMES while eating our fill at Newton Food Centre and Timbre+. This just proves that Singapore isn’t a city solely for the rich and famous; After all, we managed to have a full day of fun on just $50, with change to spare.

If you want to live it up Crazy Rich Asian-style without a budget, check out:

For those who are simply curious about the lifestyles of the wealthy as depicted in the movie: 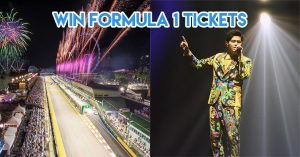 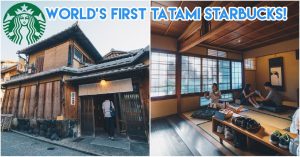