An Amazing Race through the heart of the Civic District 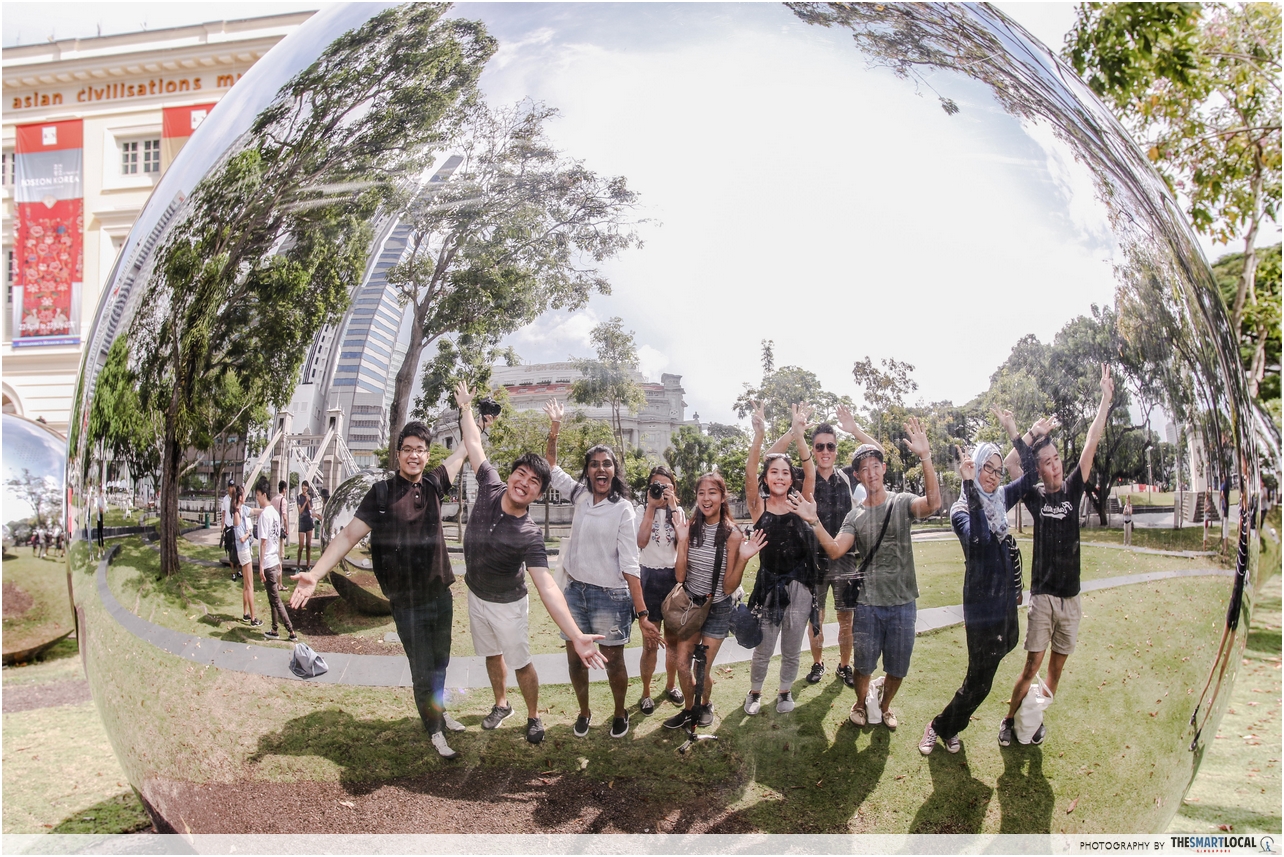 “Avoid this area”, they said. “It’ll be teeming with tourists”, they said. There might be some truth in the latter but that doesn’t mean you should take heed of the former.

What awaits at the Civic District is this sprawling, beautiful district, home to many of Singapore’s historic buildings and leading arts and cultural institutions. With the Civic District becoming a more pedestrian-friendly, green area, it is one of the best places in Singapore to achieve full-on zen mode.

It is worth the Saturday exploring. 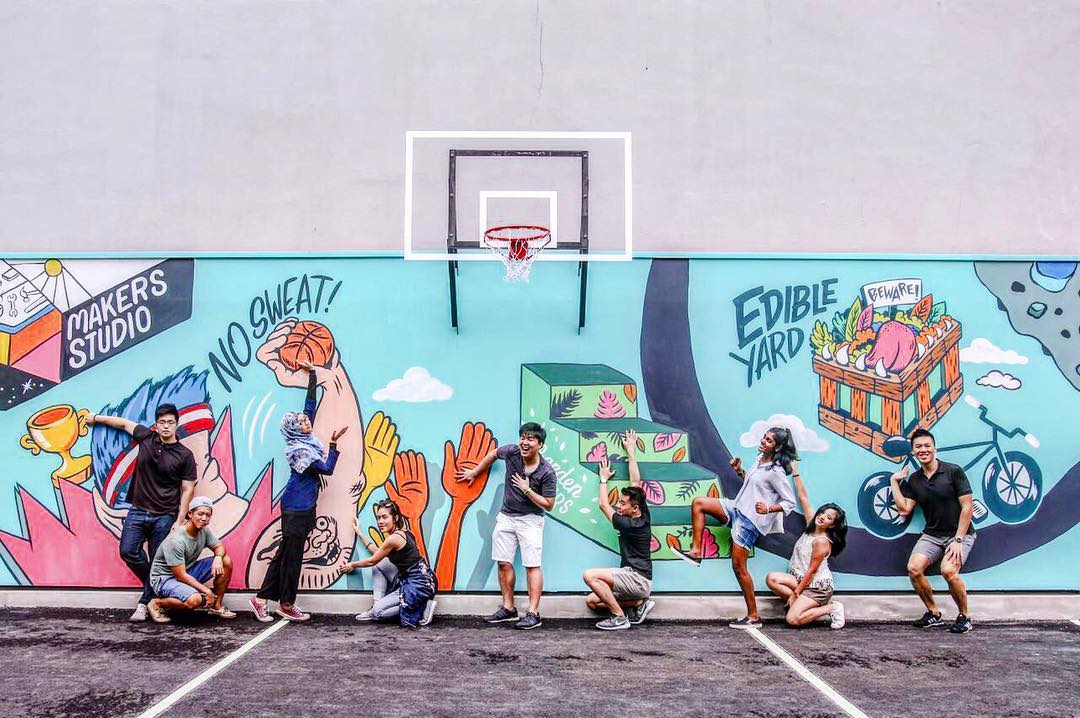 This Instastory filter was designed and made by TSL!

It would be a bummer not to make use of the pedestrianised roads and passageways connecting iconic landmarks around the Bay, so TheSmartLocal teamed up with the Ministry of National Development (MND), Urban Redevelopment Authority (URA) and NParks, to organise a first-of-its-kind Amazing Race Instawalk in the Civic District on 22 April 2017. 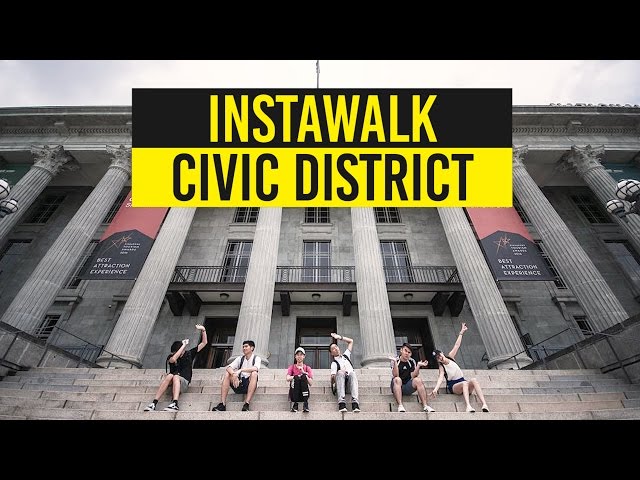 We were also joined by influencers Nedra (@nedface), Marc (@sh3ngy) and Guoxin (@9oh9x) on this day of fun and games. Before you continue reading about the challenges at each pit stop, take this brief moment to live vicariously through our #iWalkCivicDistrict video:

Challenge: Take an Instastory with a new friend

The rain made it the perfect lazy Saturday morning to sleep in, but nobody wanted to miss the Instawalk just because of a little drizzle. It was as early as 8.30am when participants arrived at the starting point of the Amazing Race – the Esplanade Outdoor Theatre, overlooking stunning views of the Bay.

Split into five teams, they were equipped with their race packs containing the necessary equipment to brave the rain, sun, hunger and mozzies.

After some mini icebreakers with the TSL team, Instagram influencers and each other, the first challenge was to take an Instastory with a new friend. Pretty simple you might think but the challenges just went uphill from there.

Thankfully, even the sun wanted in on the Instawalk action and came out from behind the clouds. The rain stopped and the race started proper!

The Jubilee Bridge was swarming with tourists in search of the best photography spot. But that didn’t stop us from embarking on the next challenge – taking a #reflectiongram on the Jubilee Bridge.

With each group leader providing 2 mirrors, it was up to the participants’ creativity to conjure the best #reflectiongram. Working it from different angles, we received curious gazes from tourists but that was no cause to falter. 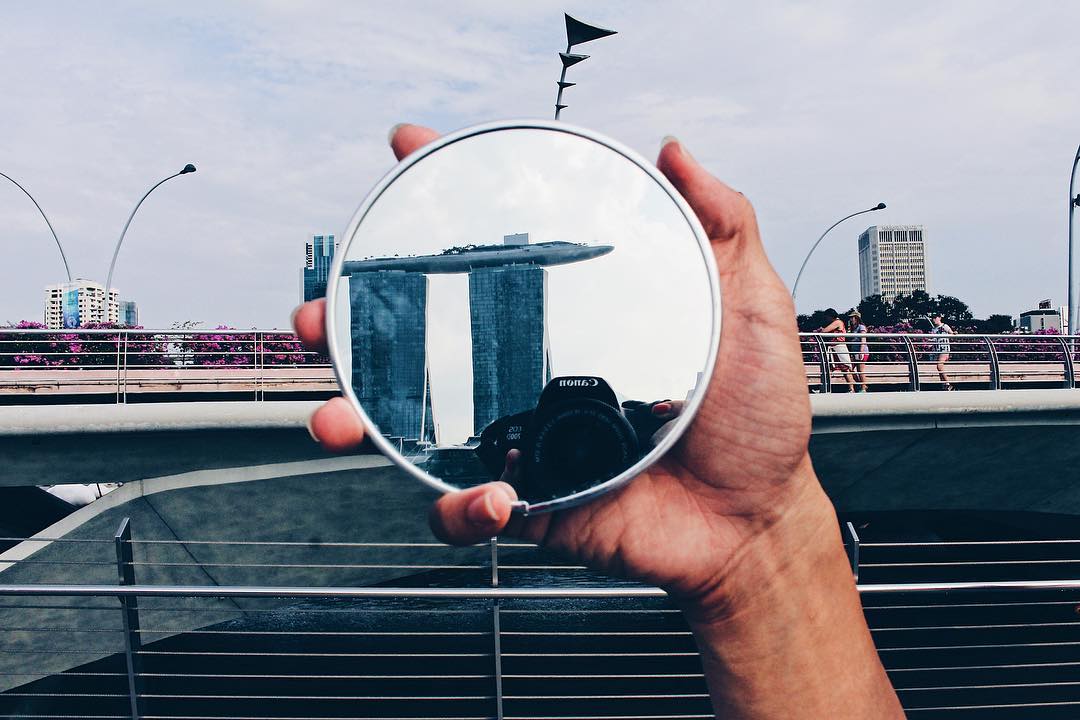 There was no better way to commemorate over 50 years of independence than to capture Singapore’s breath-taking skyline from the Jubilee Bridge, which was officially opened on 29 March 2015 to celebrate Singapore’s Golden Jubilee.

Guides from URA and NParks giving an introduction of the Esplanade Park.

Most of the participants were introduced to the Esplanade Park for the first time. They were greeted with a newly built children’s playground – complete with old-school swings and a merry-go-round – a perfect addition to the park to make it more family-friendly. After which, they were introduced to the various gazetted national monuments like the Lim Bo Seng Memorial and Tan Kim Seng Fountain, both built in recognition of their contributions to Singapore. 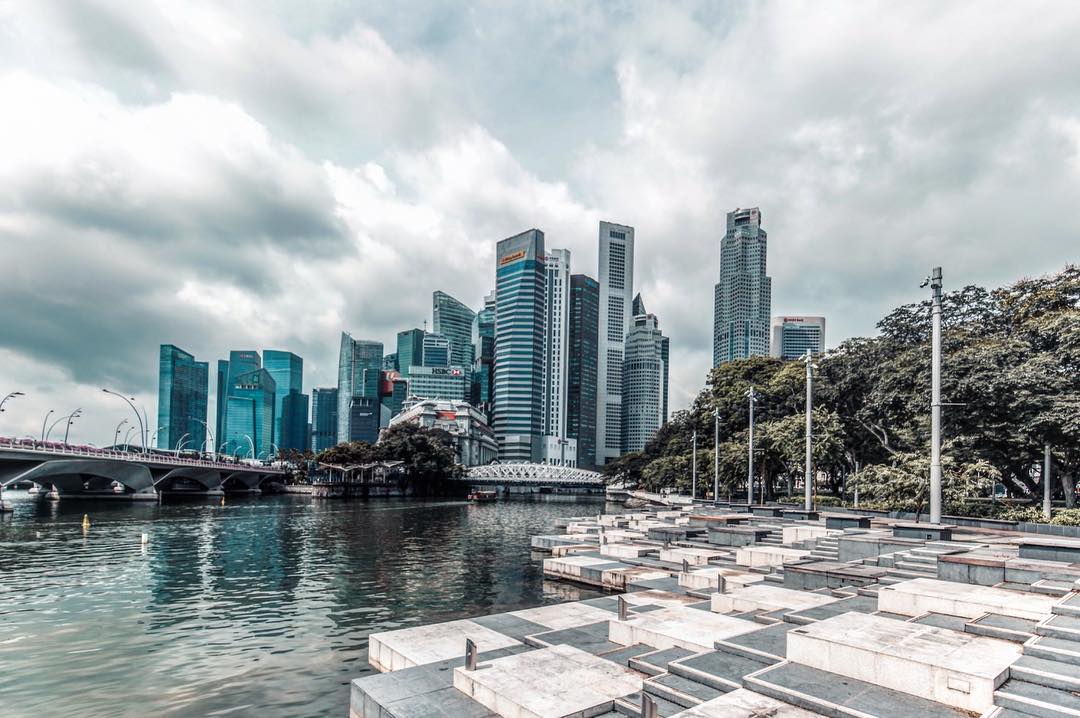 A waterfront plaza just beyond the Esplanade Park led to picturesque views down by the Singapore River – a quiet area for anyone who wants to read, write, draw or simply take photos of the nearby Fullerton Hotel.

Did you know that yoga buffs actually come here to practice against this serene backdrop? So, it was no surprise that the challenge was to recreate a yoga pose! Participants attempted twists and turns until they got into the desired yoga pose. The rest of the time was spent enjoying the zen walk through the park and taking as many pictures as possible.

Challenge: Recreate a scene from Inception 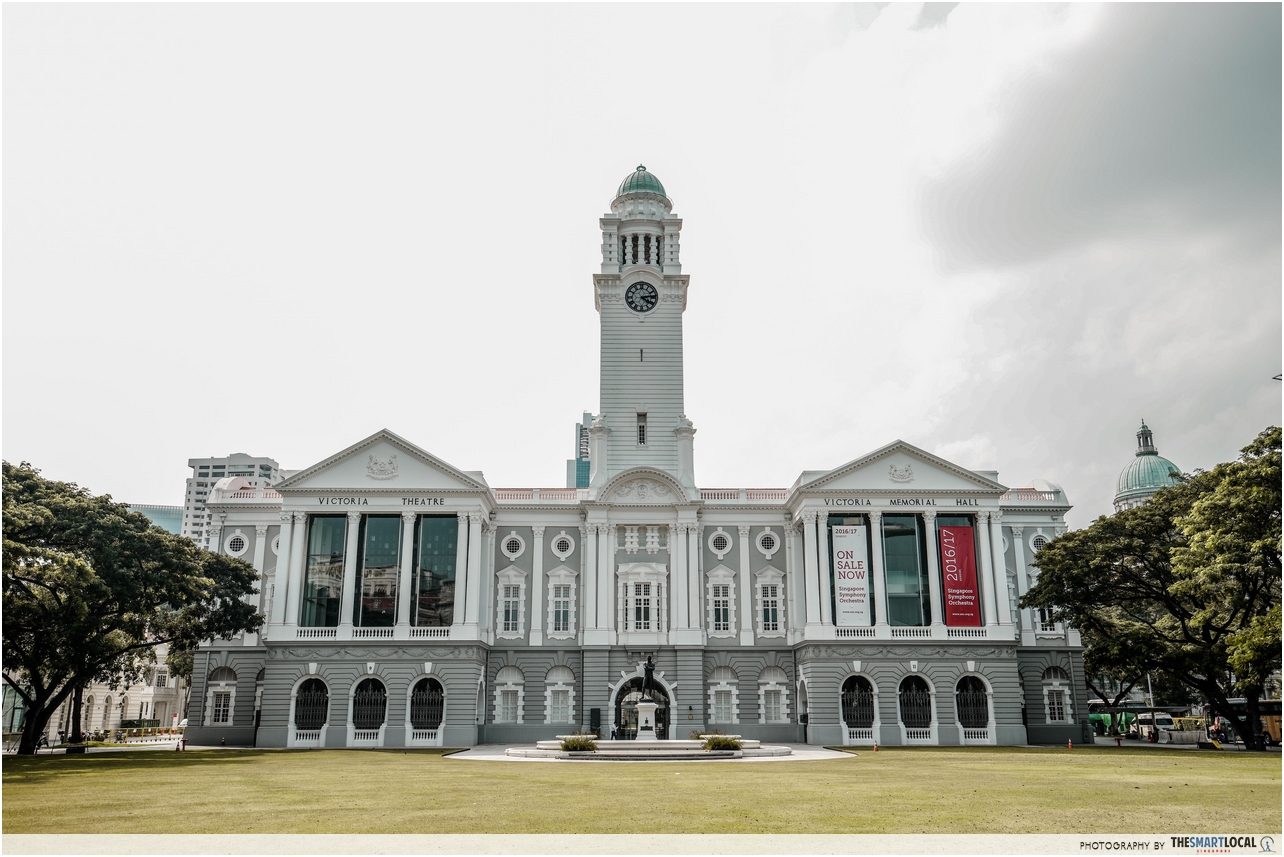 The refurbished Victoria Theatre and Concert Hall could satisfy any craving for architectural symmetry. The foundation stones of this building have been around since 1855 and careful refurbishment has ensured that everyone can continue to enjoy performances in this cultural landmark.It is, after all, Singapore’s oldest performing arts venue.

The sprawling Empress Lawn right in front is also a popular spot for music performances and other exciting events. 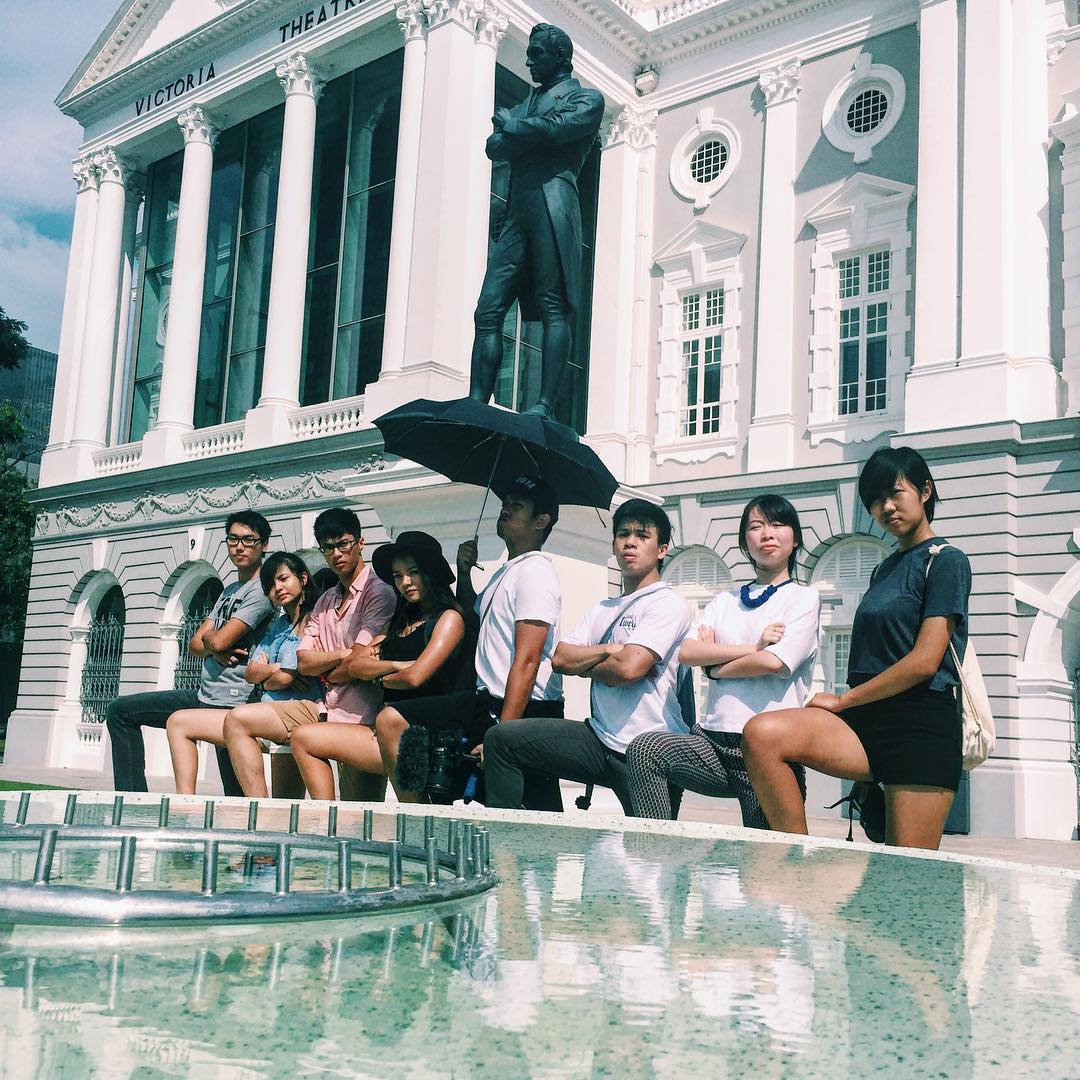 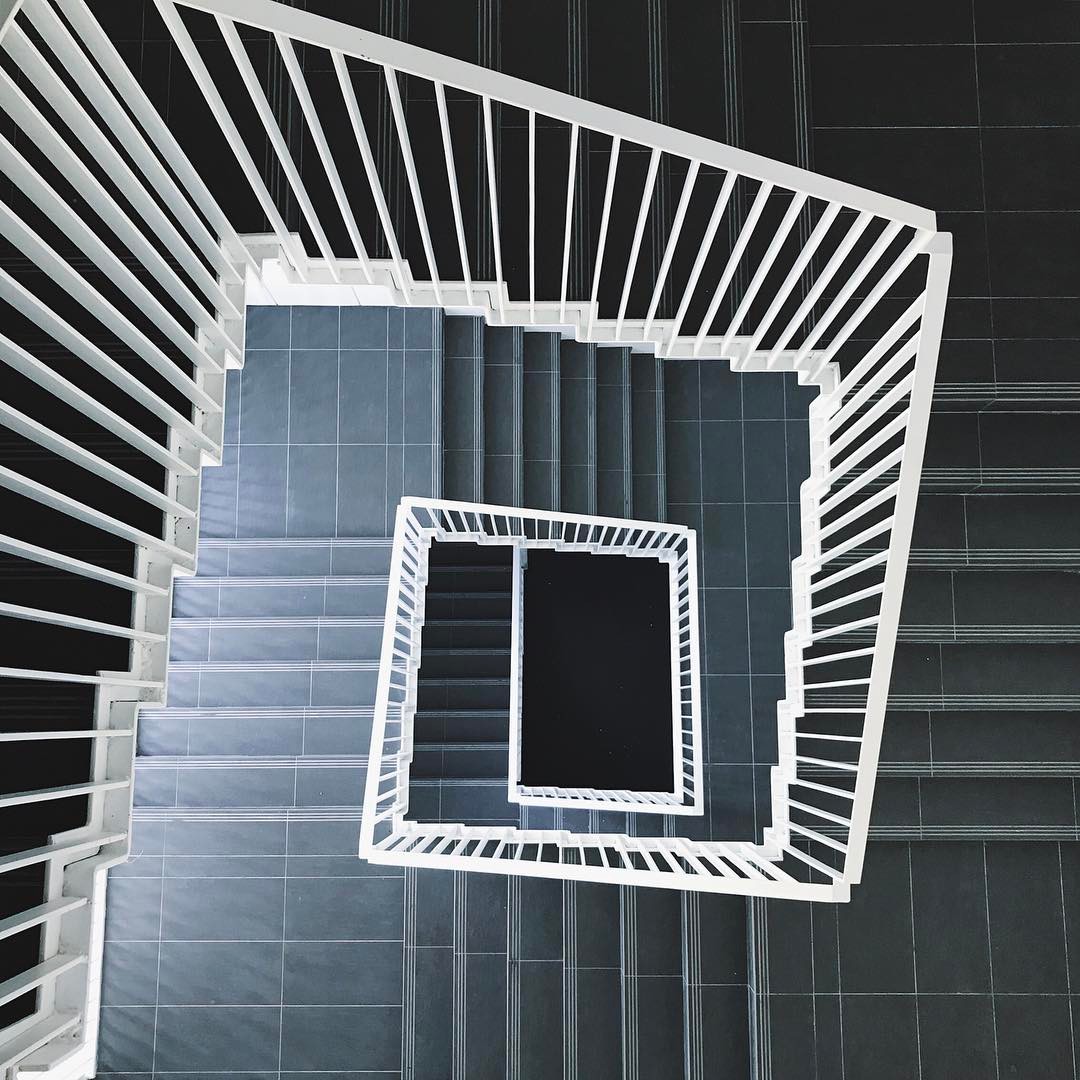 The challenge was taken indoors where they could enjoy the white-washed interior and take their Inception-inspired photographs.

Challenge: Take a shot of your own reflection

A short stroll from the Empress Lawn brought the participants to the Asian Civilisations Museum – a colonial British-style building home to over 1,300 artefacts from all across the region.

There was not enough time to let everyone go in and view the artworks, so the challenge was brought outside where the participants got to play around with a peculiar art installation – five large metal balls. 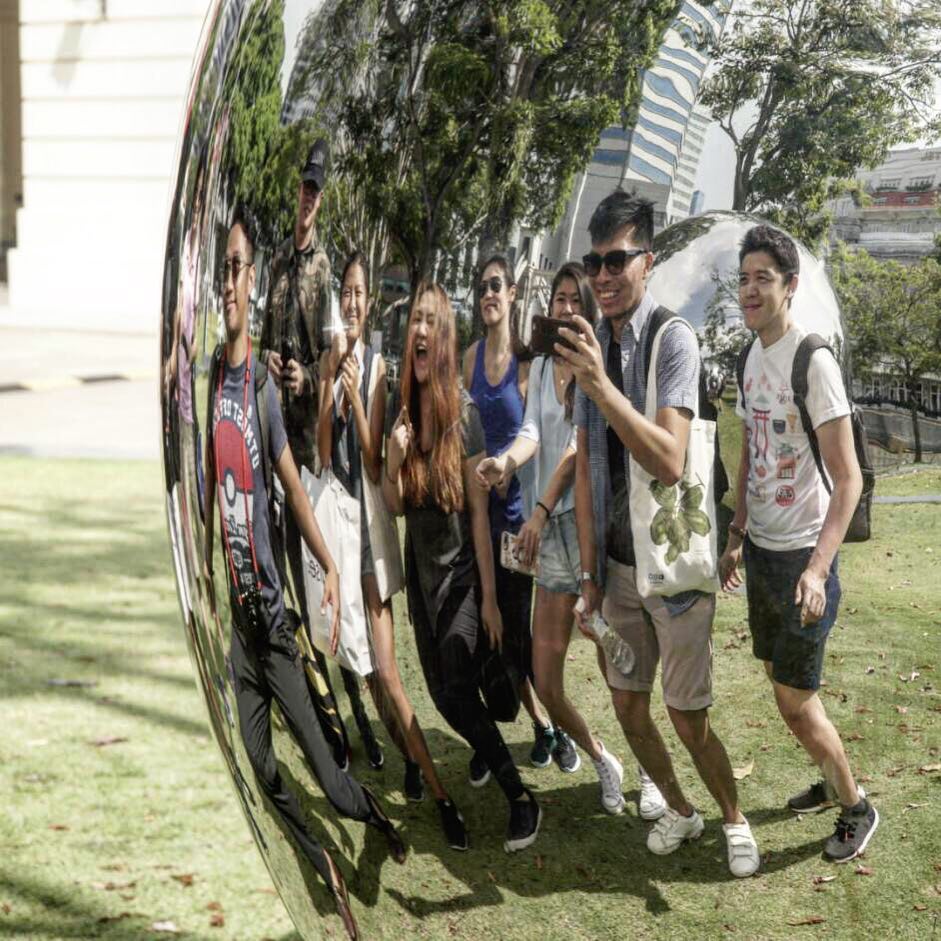 The challenge here was really simple: all participants needed to do was to take reflection shots of themselves in these reflective balls. Easier done than said. 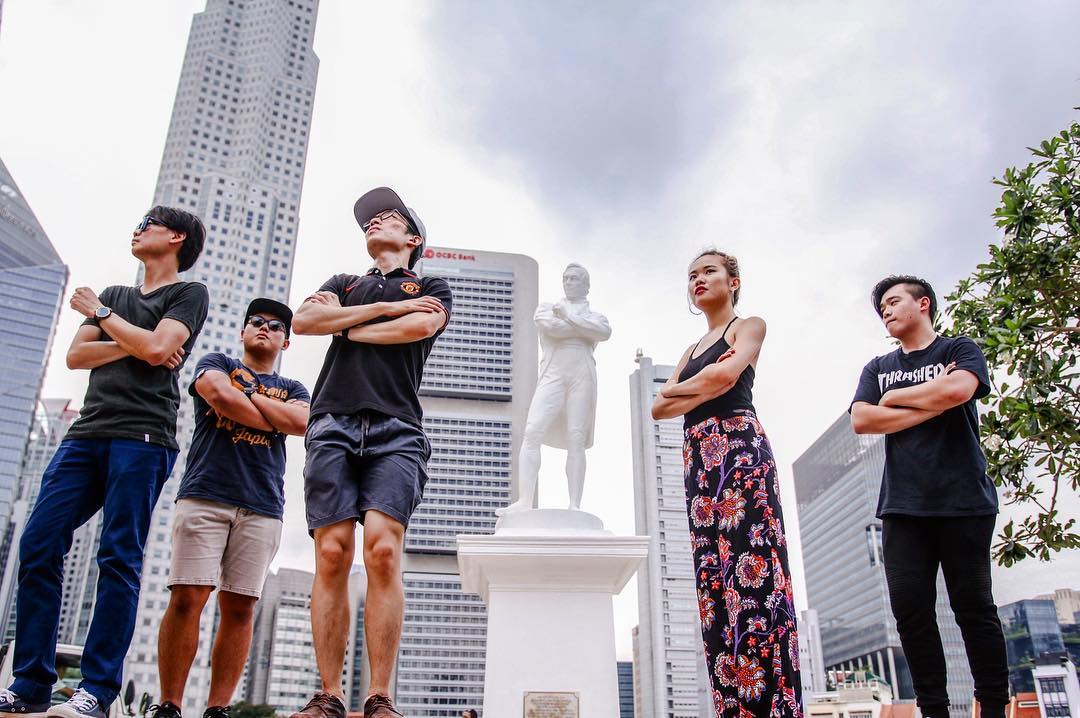 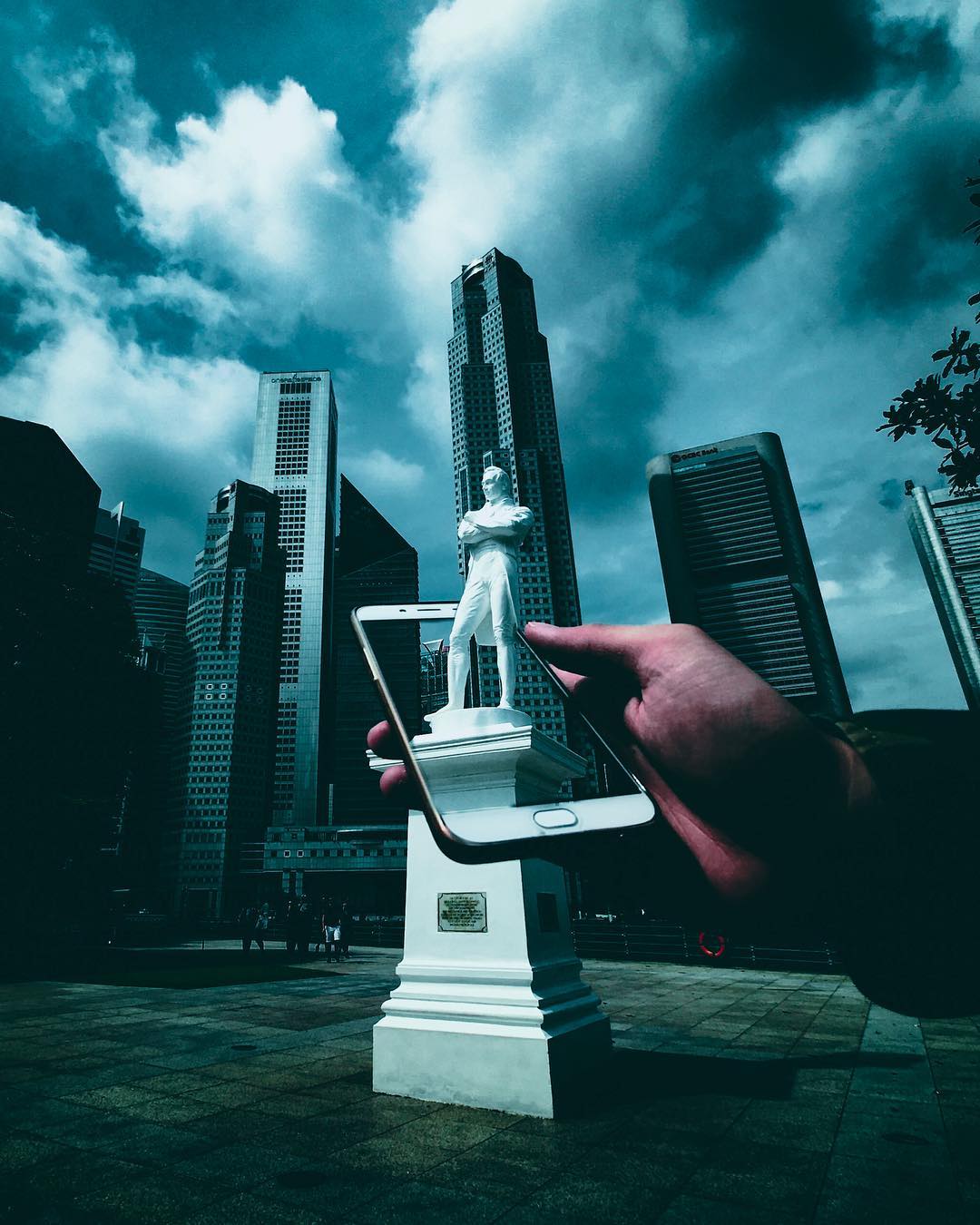 Challenge: Guess the right answers to a pop quiz

Next up, we headed to the National Gallery Singapore. What used to be two separate buildings, the former Supreme Court and the City Hall, were refurbished and combined into a single venue encompassing both classical and modern architectural elements. It is now an art museum with a collection of over 8,000 artworks.

It was apt to challenge the participants with a questionnaire on art and history. They were given a choice between “Old” and “New”. For “Old”, participants had to answer five questions on the history of the two buildings before they transformed into the National Gallery. For “New”, they had to guess where certain art installations were found in Singapore.

Everyone took to the steps after finishing up the challenge. The mandatory Gossip Girl photo was shot multiple times.

Challenge: Identify the structures around the area

This was the last leg of the race and it could be said that the walk to Fort Canning Park was a challenge in itself. After an arduous climb up over 100 steps, the teams reached the Raffles Terrace at Fort Canning Park.

Challenge: Find the headstone of George Coleman or take a picture with “five stones”

One group managed to find the headstone!

There was a choice between “Headstone” or “Five stones” – in the former they had to find the headstone of George Drumgold Coleman, one of the pioneer architects of Singapore, while the latter was a photo challenge to come up with the most creative shot of five stones. 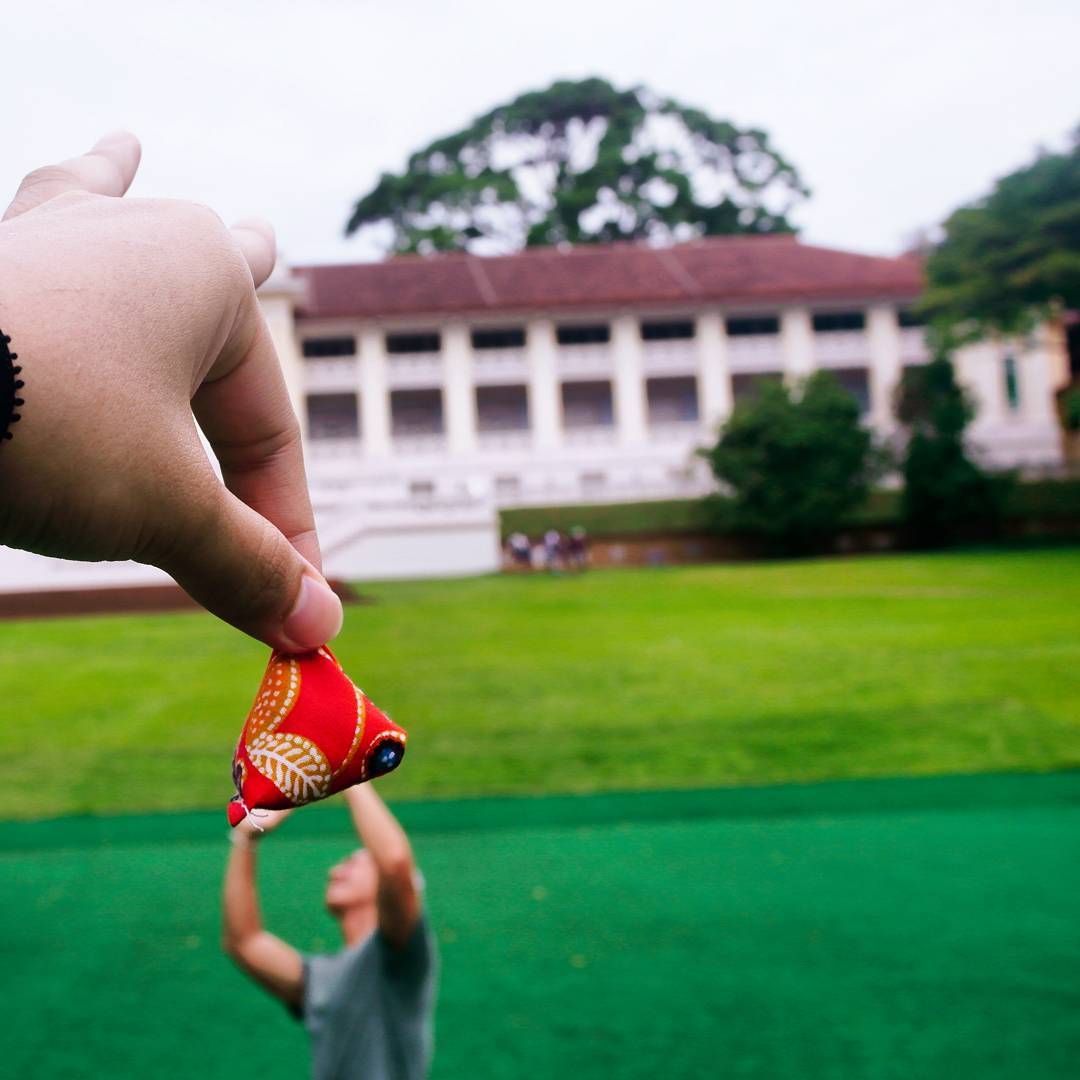 It wasn’t easy finding the headstone so most went for the photo challenge instead.

All they had to do here was to take a group picture and that was it. They completed the Amazing Race!

Finally, it was back to air conditioning inside the Old Married Soldiers Quarters. This was the gathering point for all participants at the end of the race.

There was one more component left to the race and that was the photo challenge. Contestants got down to choosing their best photos, making their edits and posting them on Instagram for the judges to pick the winners for Perspective, Roots, Contemporary and Best Team Photo. 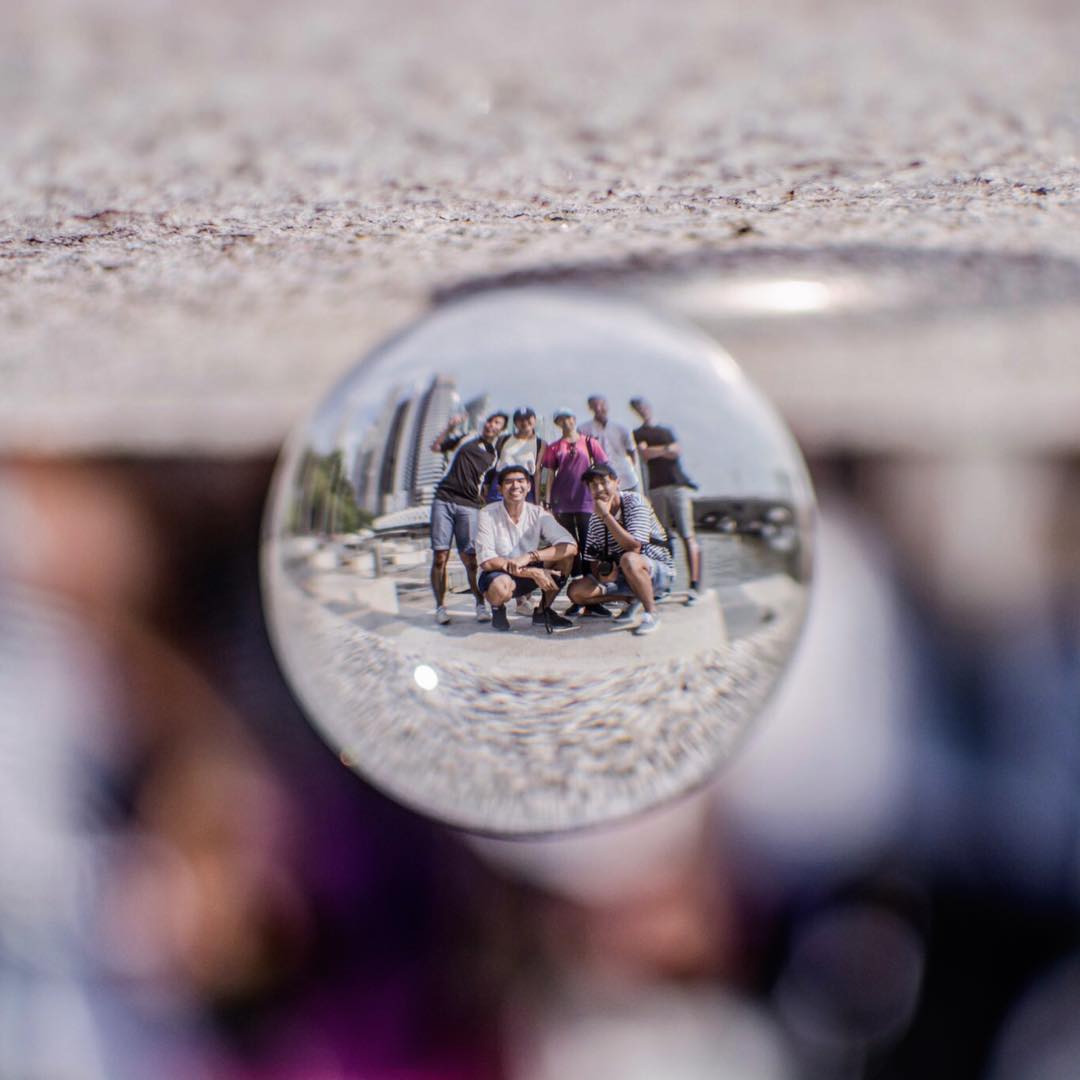 After the prize presentation, it was time to bid farewell to the new friends made at this Instawalk in the Civic District. Everyone definitely had something to take away – new friends, new discoveries and new perspectives.

The Civic District has definitely transformed into a more people-friendly public space! It has so many iconic landmarks to visit and exciting things to do. Look out for events like Car-Free Sunday SG or the thrilling Marina Bay Singapore Countdown, organised by URA.

Look out for the next #Instawalk 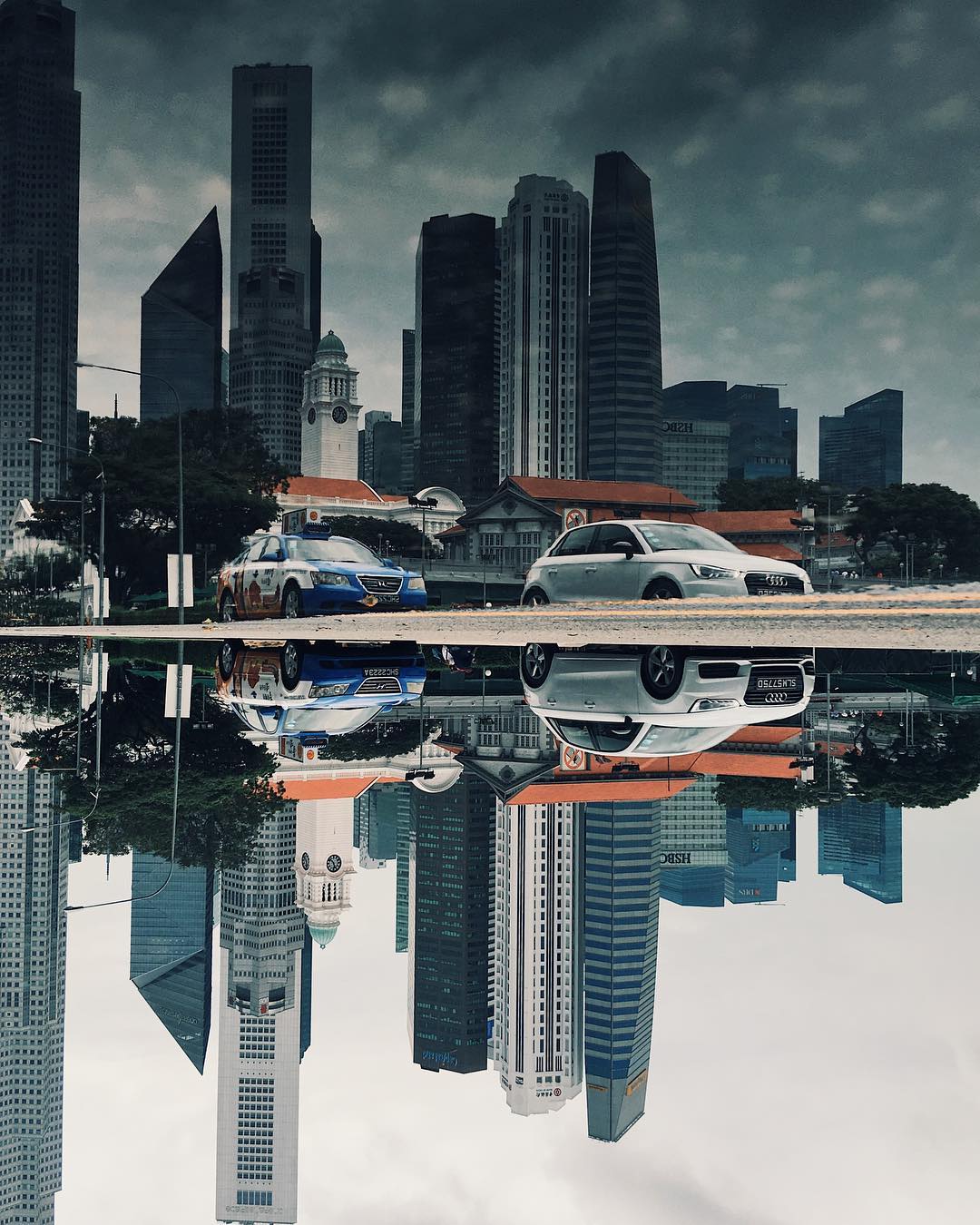 We’ve ventured to the Jurong and Bedok heartlands, the enclaves of Little India and Tiong Bahru, and now experienced the zen vibes within the Civic District. Next up, we have Queenstown.

To find out when our Queenstown Instawalk is happening, follow @thesmartlocalsg and @MNDsingapore for more updates. For more inspiration on what you can do in the Civic District, check out all the photos from this Instawalk at #TSLWalks and #iWalkCivicDistrict.

Hope to catch you at the next Instawalk!