Some of us are always ready to meet new people. Others like to keep our circles of acquaintances small. Regardless, we can probably all agree that true friends – those always ready to stand with us through thick and thin – are not easy to come by.

One man from Đà Nẵng had to learn that lesson the hard way. He took a friend out drinking despite the strict social distancing orders in place in the city currently. Then, when the police spotted them, his friend fled the scene, leaving him to deal with the consequences alone. Ever since 16th August, Đà Nẵng has entered a state of enhanced citywide social distancing to curb the threat of Covid-19. According to the new directive, all residents are required to stay at home at all times, and not even trips to buy groceries are allowed.

But despite the strict orders, some people still try to sneak out behind authorities’ backs, often for the most mundane of reasons such as to meet friends for drinking sessions.

Dân Trí reported one such case yesterday. And while this is surely not the first nor the last time we’ll hear accounts of people caught breaking the rules and fined, this one story comes with a rather funny twist.

According to Dân Trí’s article, on the evening of 21st August, Đà Nẵng police on patrol spotted a young man driving his motorbike on the streets despite the travel restrictions, carrying one of his friends in the backseat. Naturally, the police officers pulled them over for questioning.

And that moment right then, was when the man driving learned an important lesson about friendship.

The man’s friend fled the scene, leaving him to deal with the police alone The man was left by his friend to deal with the police alone
Image credit: Truyền hình An ninh Đà Nẵng

Seeing the police, the man in the backseat seemingly panicked and, disregarding all bonds of fellowship, fled the scene, leaving his friend behind.

Now facing the police alone, the driver made various excuses in a desperate attempt to justify his going out. Eventually, though, he had to admit that he was simply taking his friend out to find a spot to drink together.

Needless to say, that was far from an acceptable reason to break the rules. The man was then given a heavy fine for his action.

Stand by your friends no matter what

The two men in this story surely knew full well of the ongoing social distancing policy in Đà Nẵng, but decided to break it anyway, so the fine the police issued was well-deserved.

But as the sacred Bro Code would have it, the least they could have done was to stand their ground and face the music together. Alas, it wasn’t the case here.

On the other hand, perhaps the sizable chunk sawed off of his wallet after this incident will teach the driving man not one, but two lessons. Medical Staff Wear Cute Signs On PPE, Asking People Not To Be Mad At Them
Man Angered By Friend’s Teasing, Breaks Social Distancing Rules To Settle The Score With Him 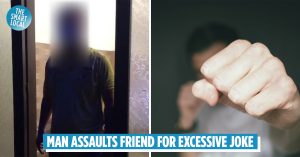